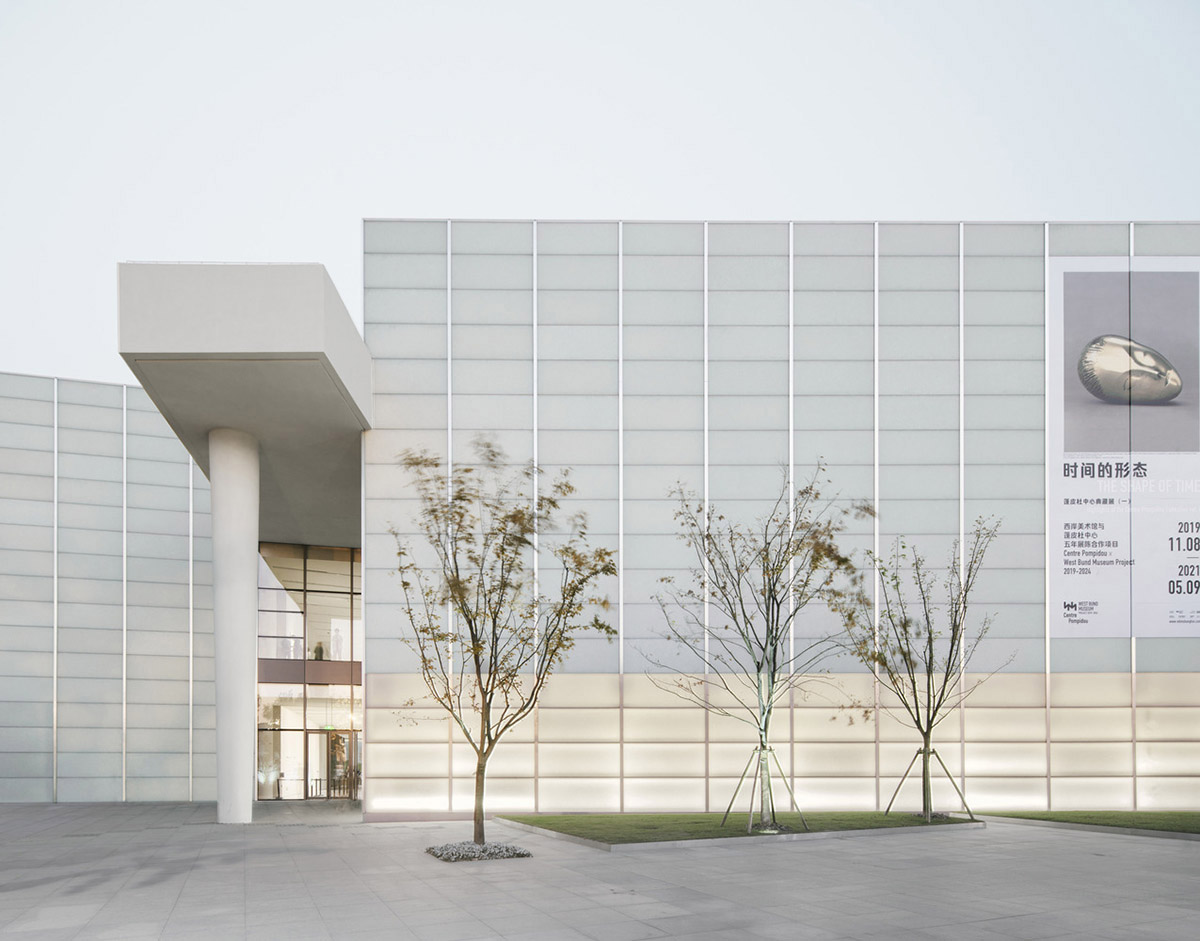 David Chipperfield Architects has completed the West Bund Art Museum in Shanghai, China, which is dubbed as Centre Pompidou's satellite building in China, boosting a cultural collaboration between France and China will show a series of exhibitions in the museum over the next five years.

Officially opened to the public on November 8, the building was inaugurated with a ceremony with speeches by French President Emmanuel Macron, the Mayor of the Xuhui district, Fang Shizhong, as well as Serge Lasvignes, President of the Centre Pompidou. 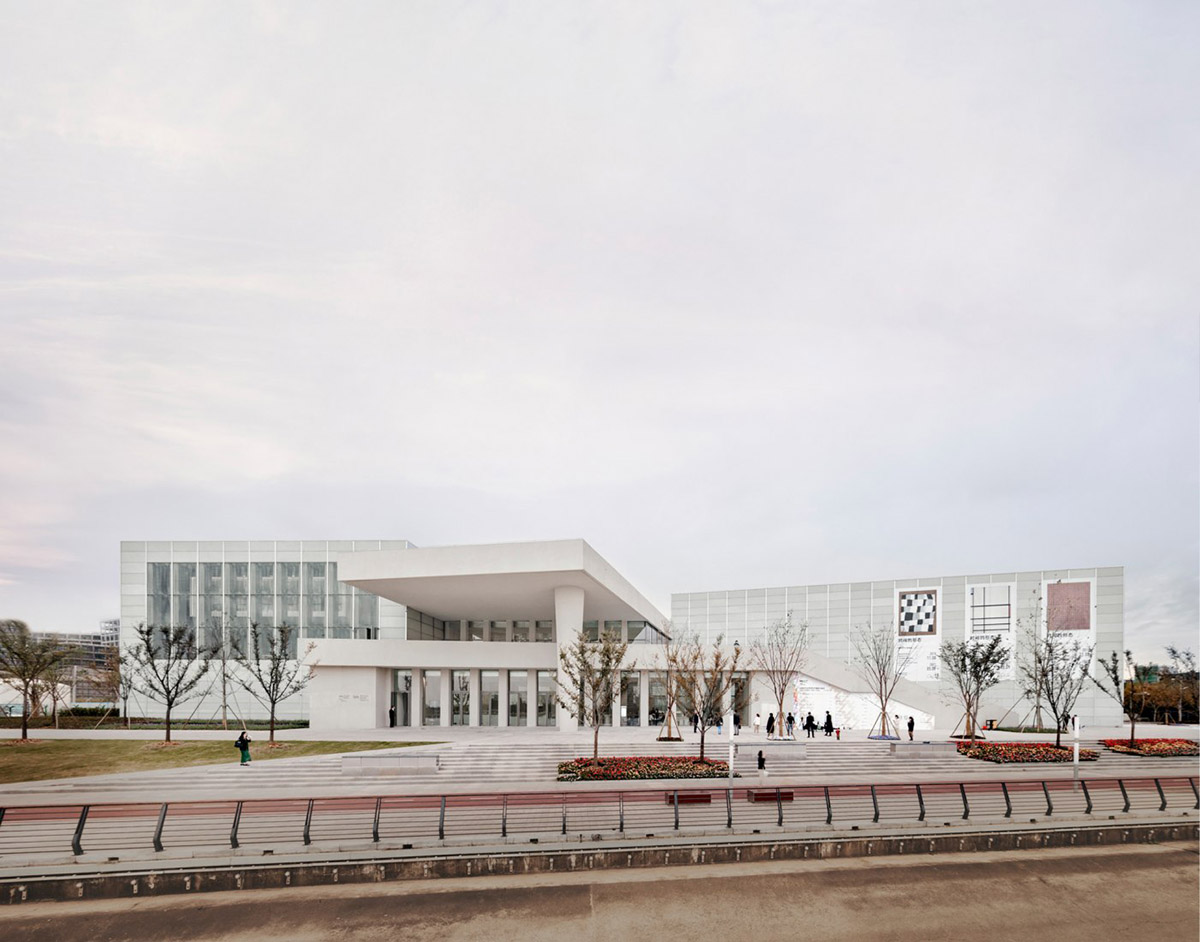 The studio first revealed design in 2017, and the project was completed in two years. Conceived as a new art gallery on the Shanghai Corniche, the building creates a 8.5 kilometre frontage on the northern bank of the Huangpu River. The project was developed by Shanghai West Bund Development Group company. 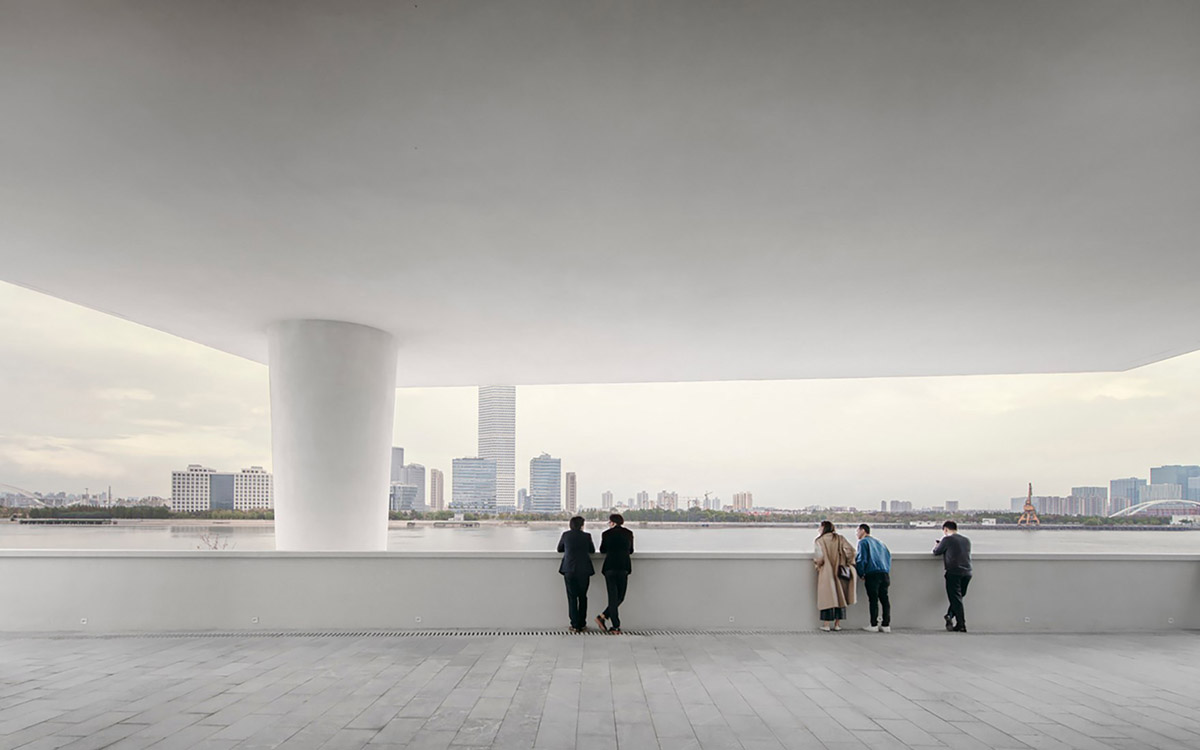 The promenade connects the Xuhui district to the historic Bund and forms a key part of the West Bund Masterplan, which envisages a new cultural district over nine square kilometres of former industrial land. 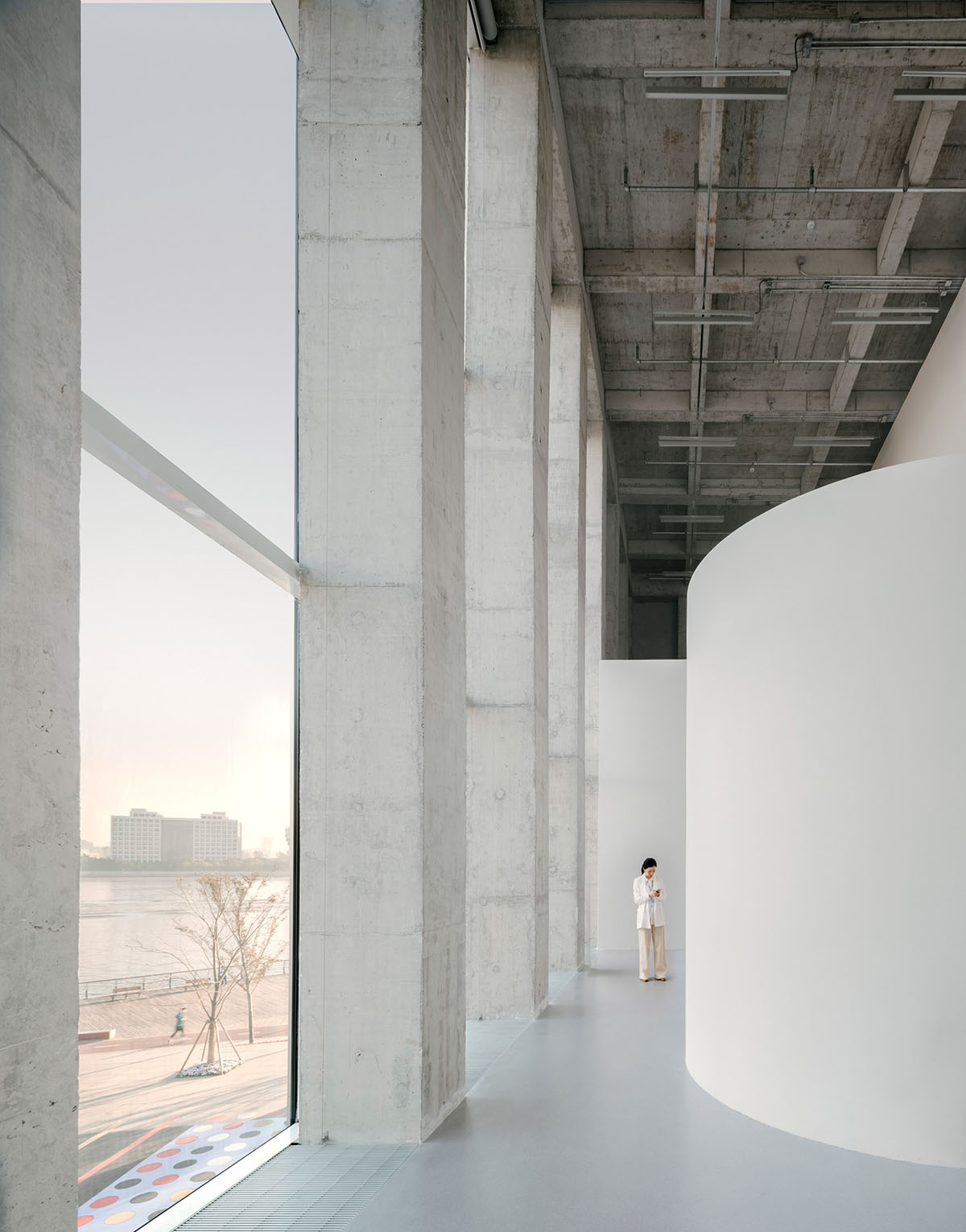 The museum is situated on a triangular plot at the northernmost tip of a new public park, at the point where Longteng Avenue and the river converge. 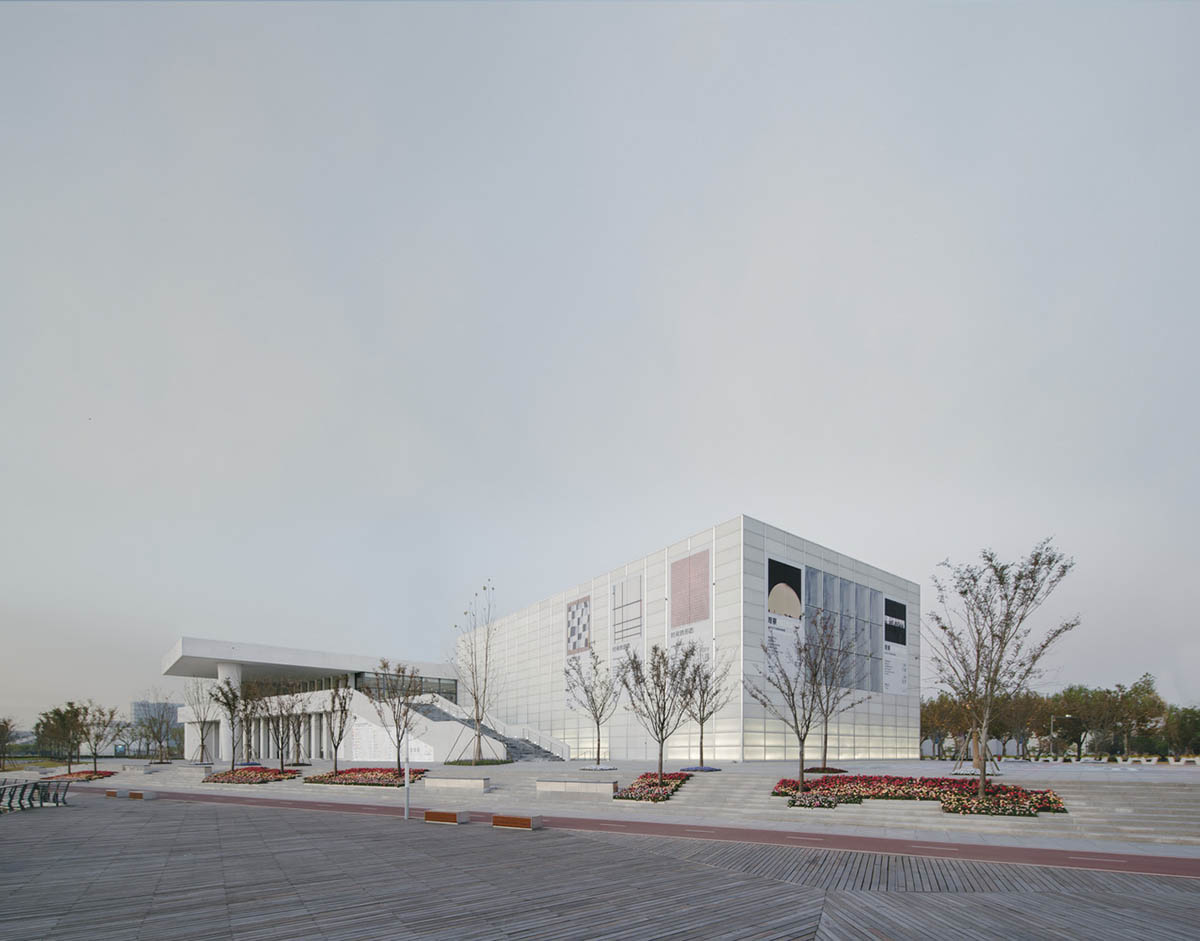 Covering a 22,000-square-metre area, a raised public esplanade above the flood plain surrounds the building, offering views to the river. The edge of the esplanade on the east side is delineated by a continuous series of steps with landing stages leading to the riverbank. The site offered the opportunity to create a completely freestanding structure and its location allowed for improved access to both the river and the park. 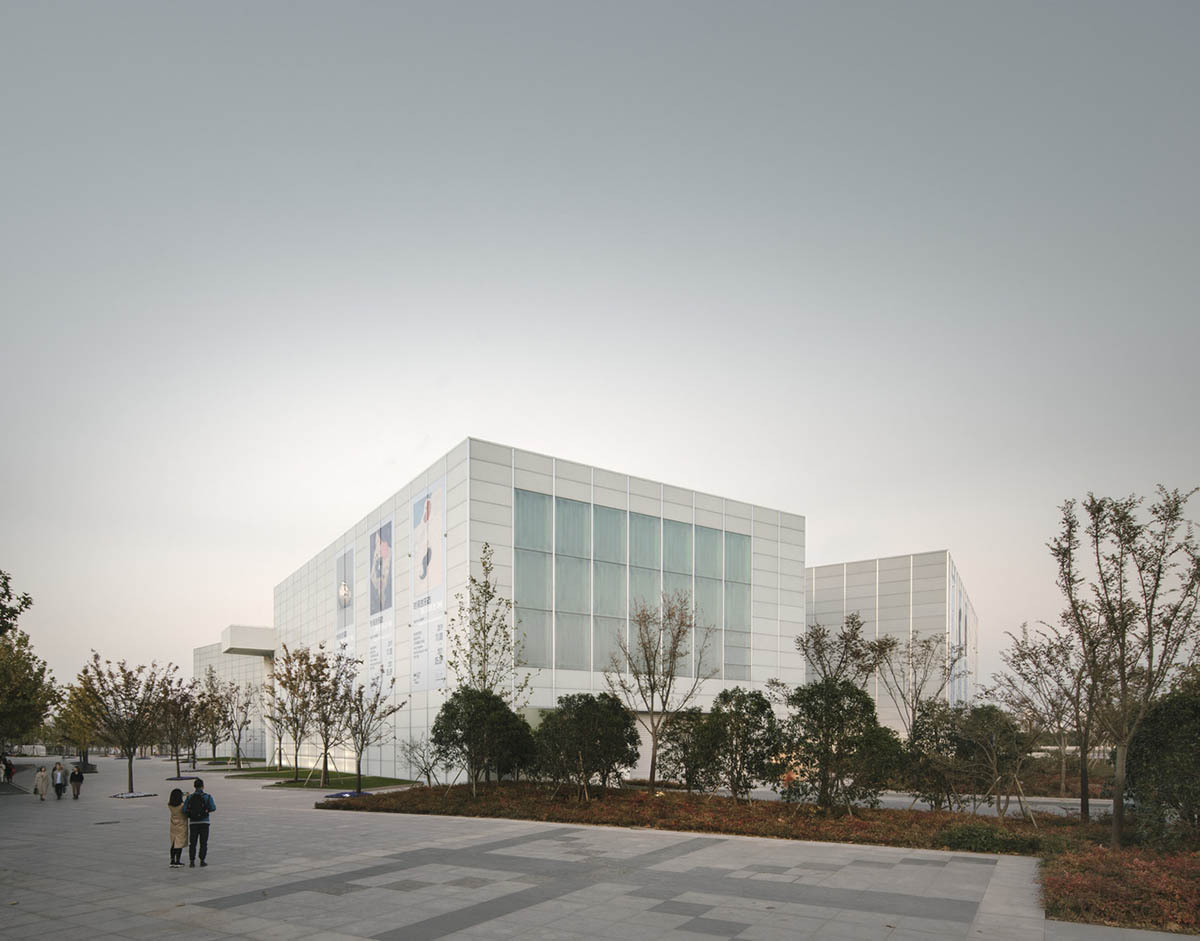 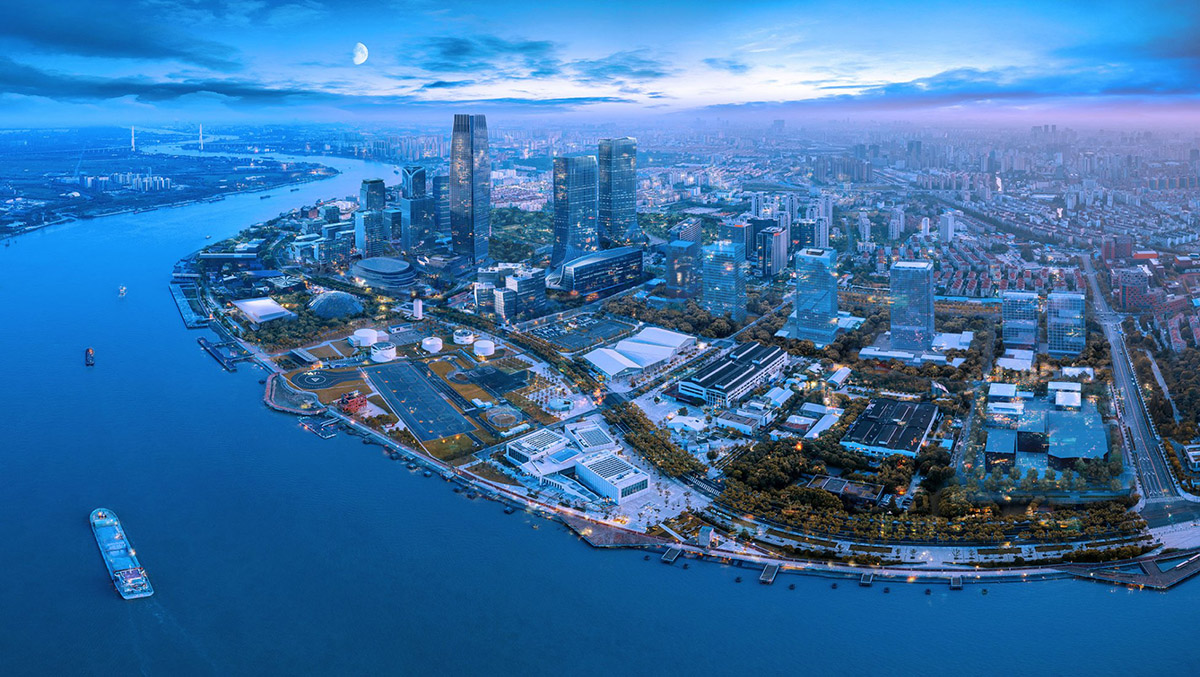 Composed of three main gallery volumes, placed in a pin-wheel formation around a central lobby, the museum has a double-height atrium. This configuration allows fordifferent components of the museum to operate independently. 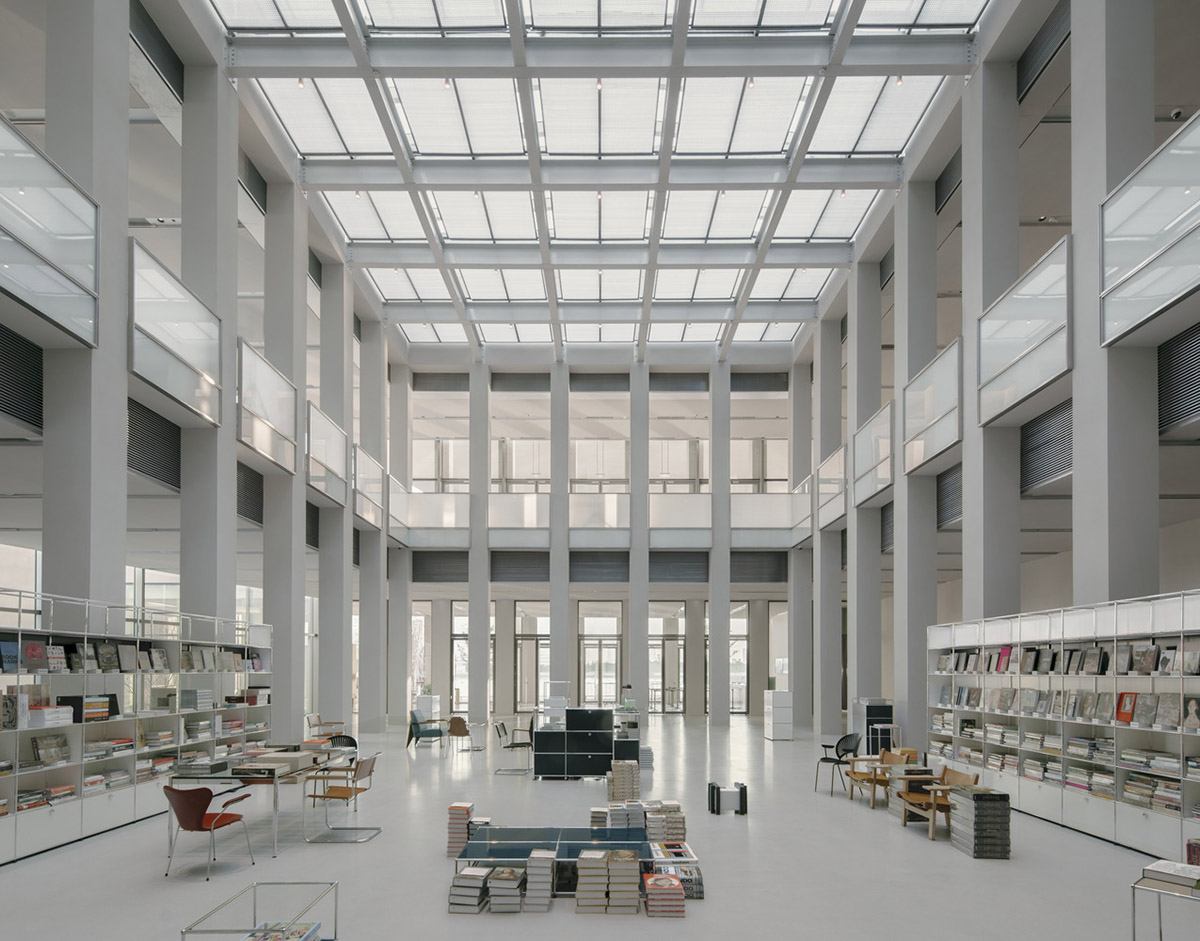 The lobby itself is accessed from Longteng Avenue to the west and from the riverside to the east. The latter offers two entrance options: the visitor can either descend into a sunken courtyard at a lower level or climb a set of stairs from the esplanade to arrive in the central lobby at a higher level.

Both of these levels give access to the main gallery spaces. The museum shop and café can be found at an intermediate level directly connected to Longteng Avenue. 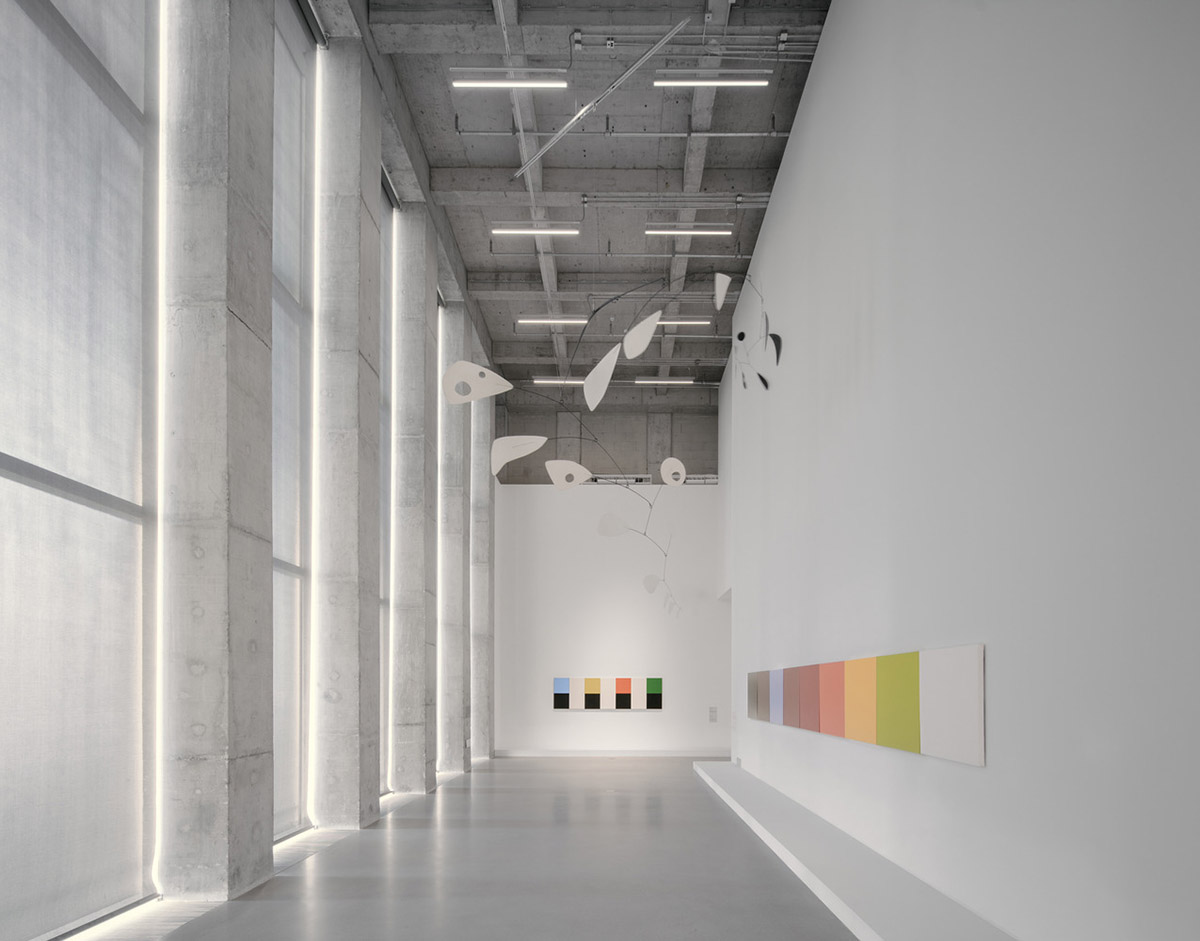 Each of the three main volumes is 18 metres high, with an upper and lower level. The upper level of each volume contains a top-lit gallery space. The spaces on the lower level vary in function, housing a multipurpose hall, an art studio and education spaces. These are partially sunken, and lit by clerestory windows. 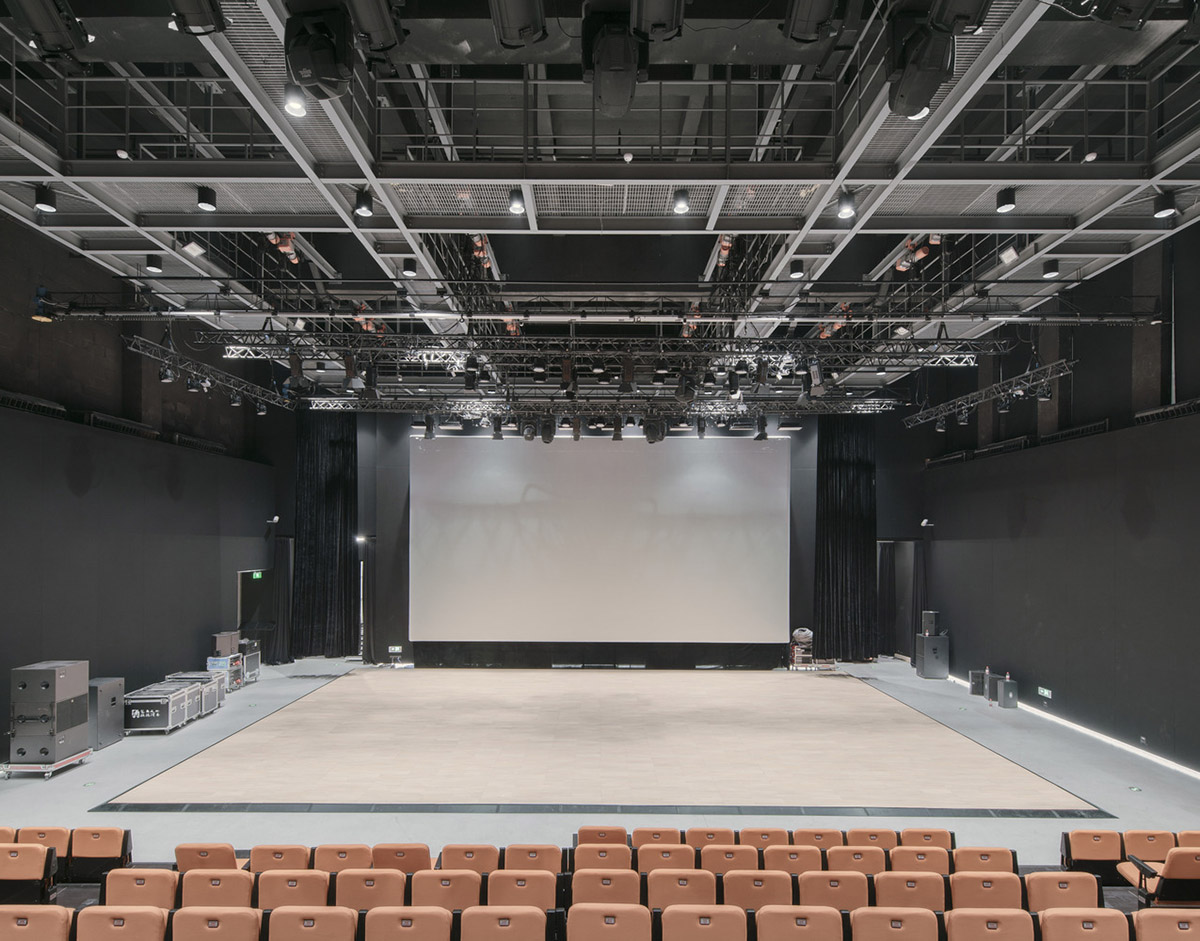 A low pavilion housing the café sits at the river’s edge at the level of the esplanade. Its elongated form is intended to maximise river views while its roof serves as a generous terrace fronting the upper entrance. The roof of the atrium remains below the roofline of the major volumes and cantilevers far out beyond the building towards the river and the road. 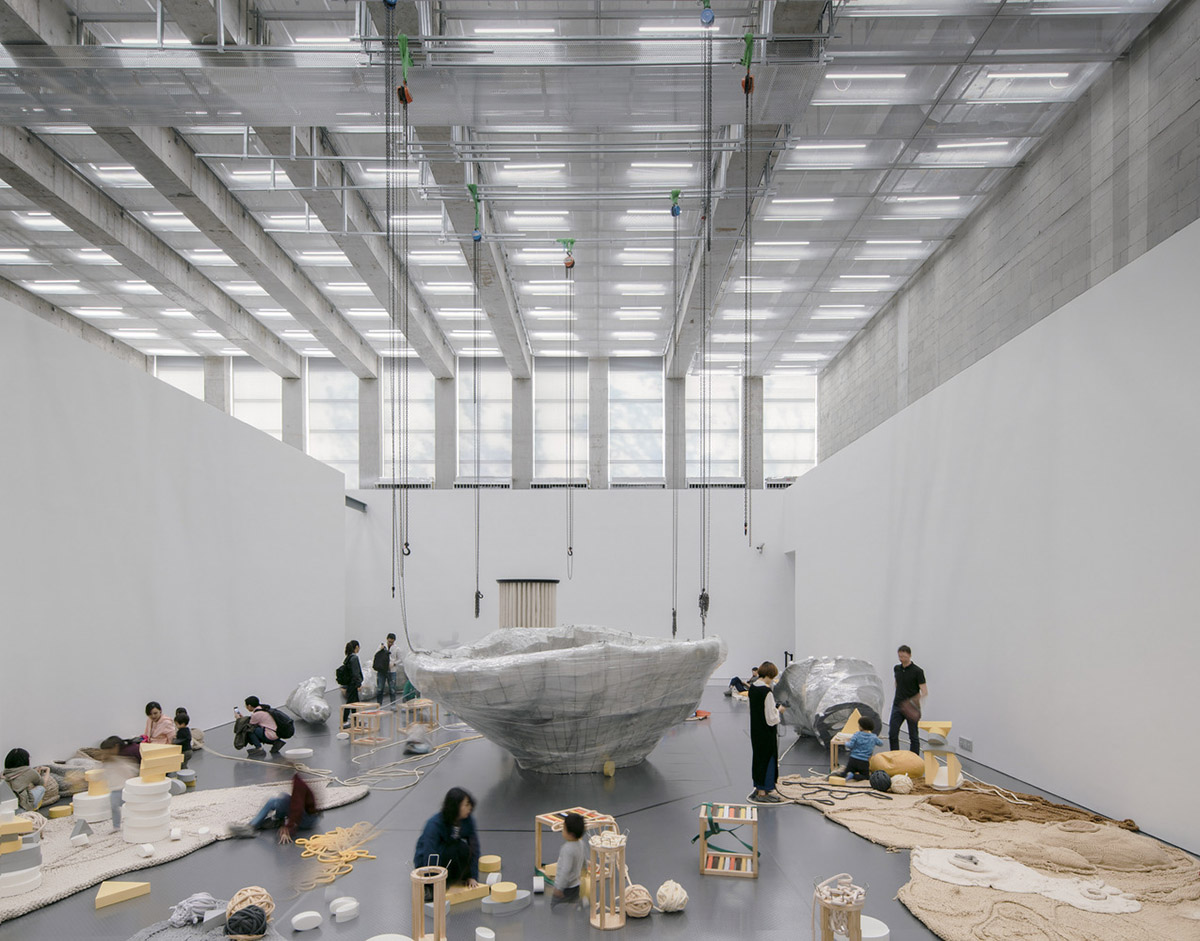 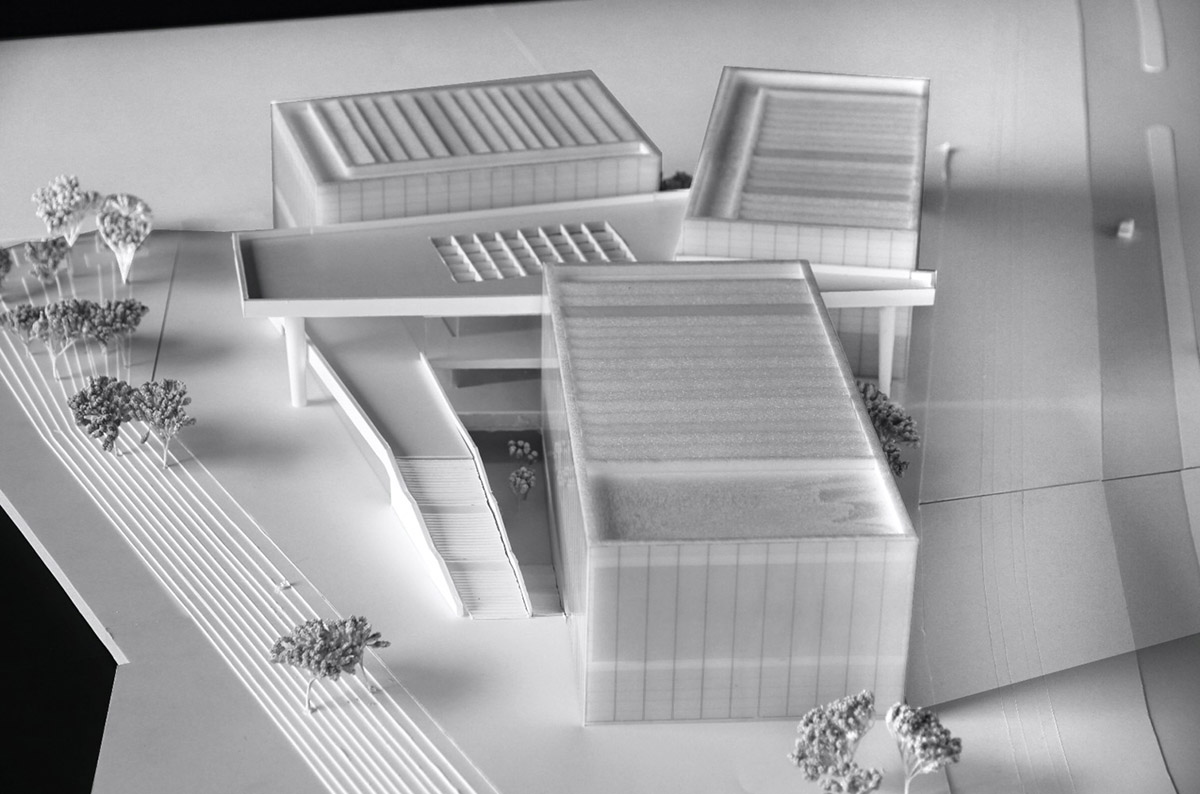 At either end, the roof is supported by a colossal tapering column that draws attention to the entrances. The three dominant volumes are clad with translucent recycled glass, lending the complex an opaline quality. These façades, appearing iridescent during the day and prismatic at night, stand in contrast with the smooth brightness of the plaster clad hovering roof canopies.

The pin-wheel configuration of the galleries is reinforced with large windows at their outer ends offering panoramic views over the park, the river and the city. 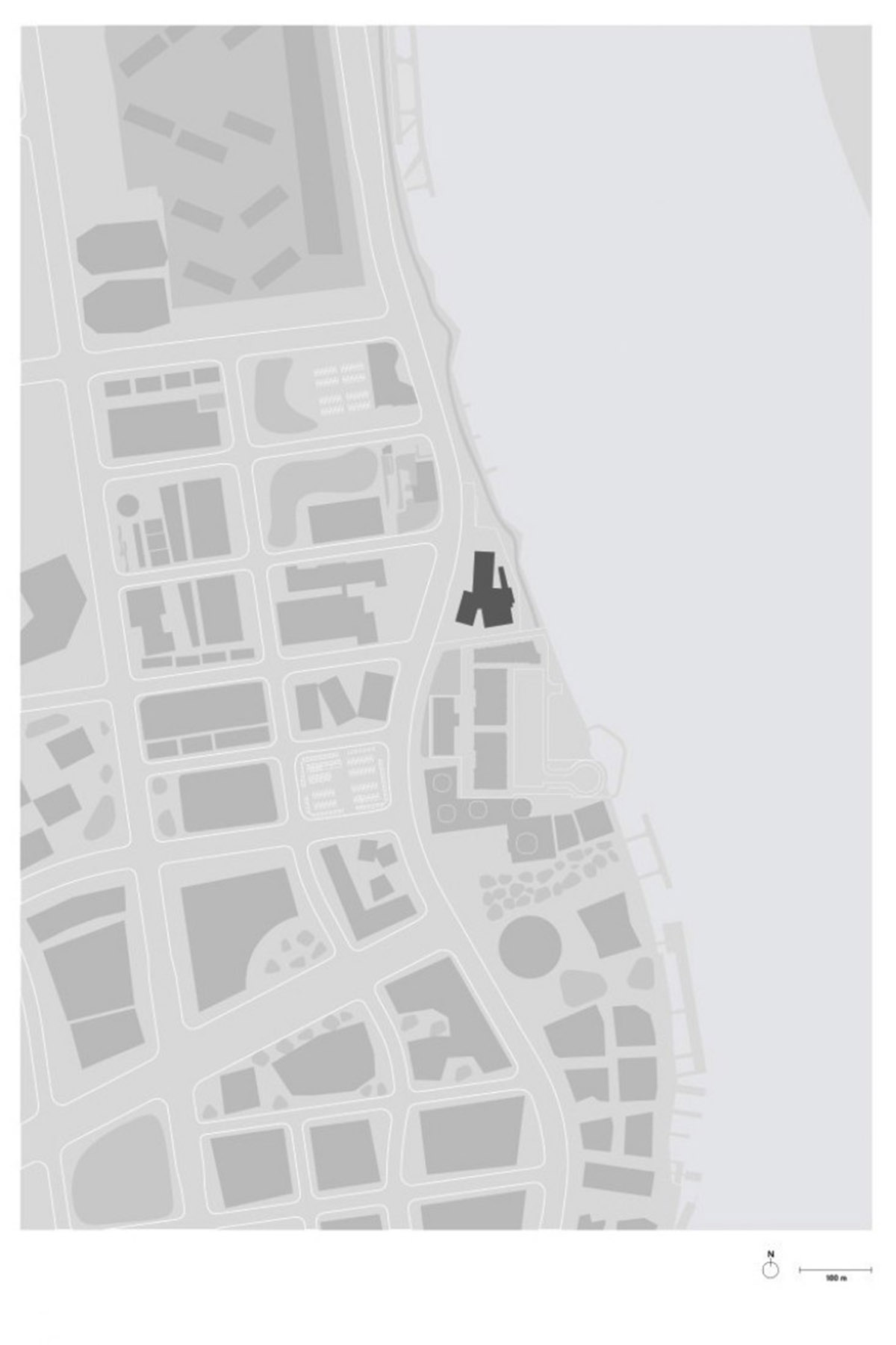 The Centre Pompidou Paris and the publicly owned West Bund Group have agreed on a contract establishing a cultural partnership. In the five years following the opening, the Centre Pompidou is showing a number of exhibitions in the new museum as part of a cultural collaboration between France and China. 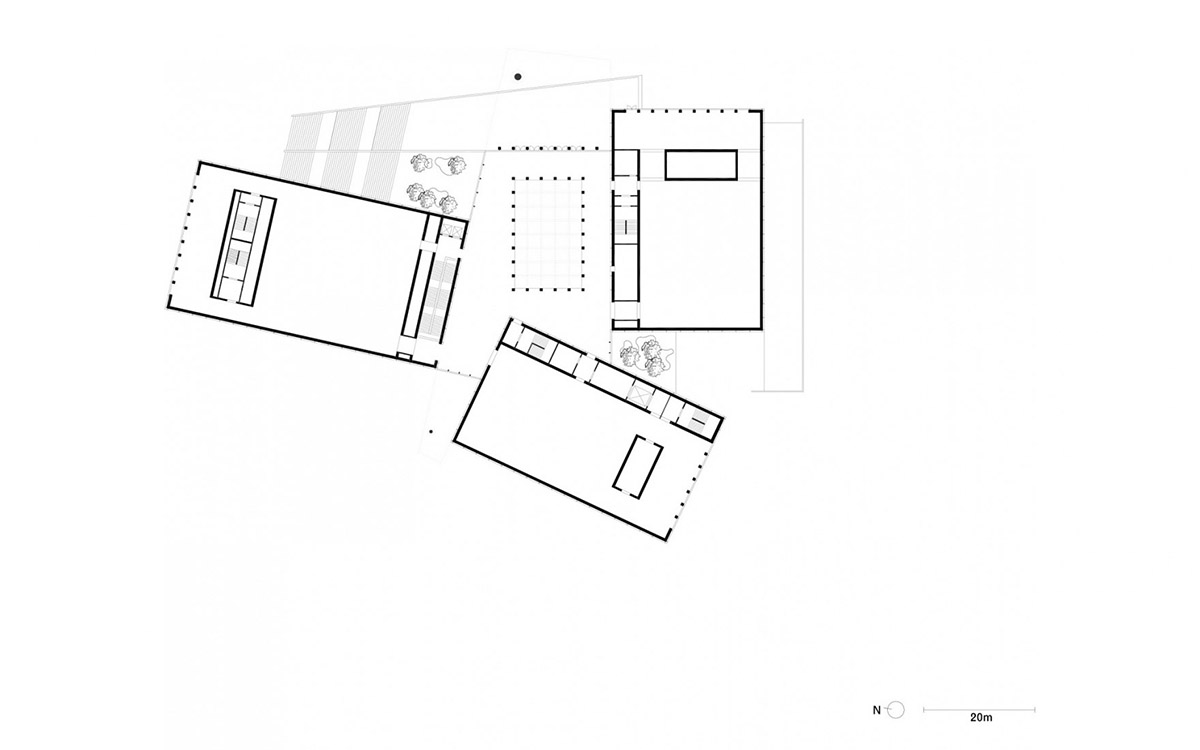 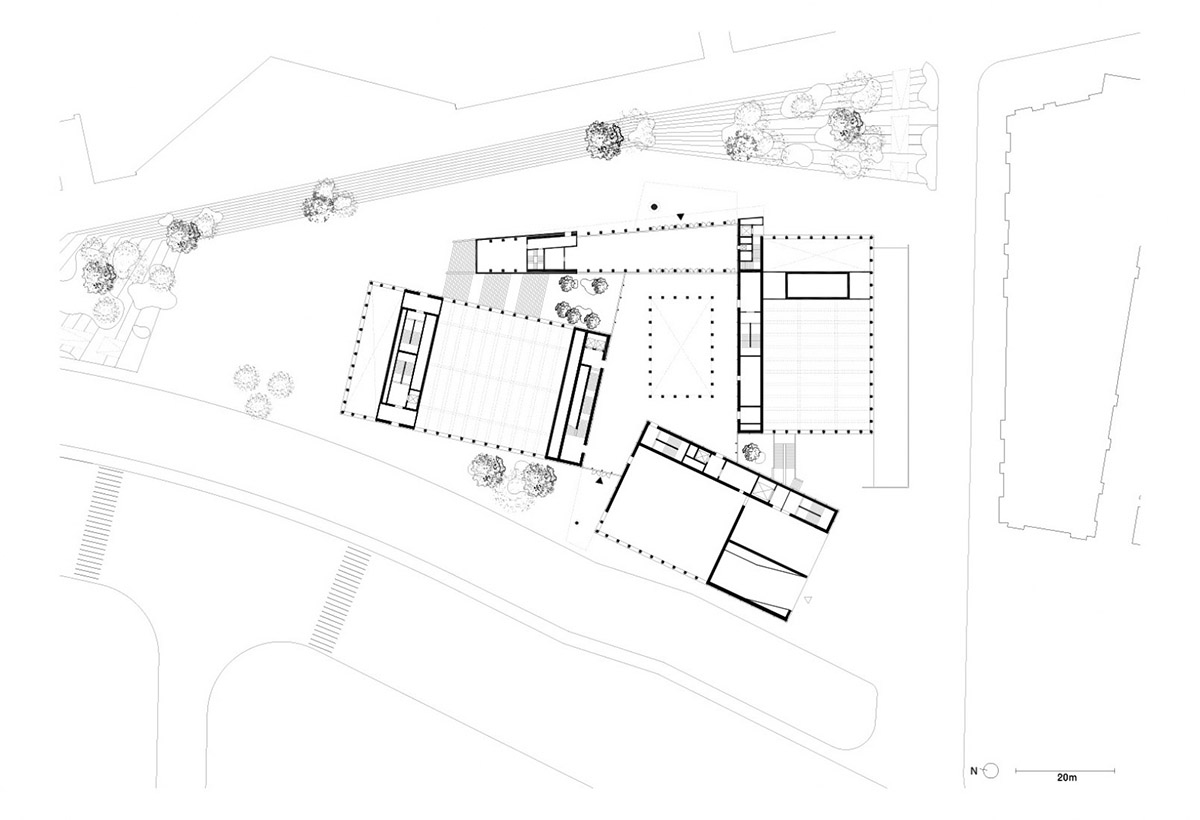