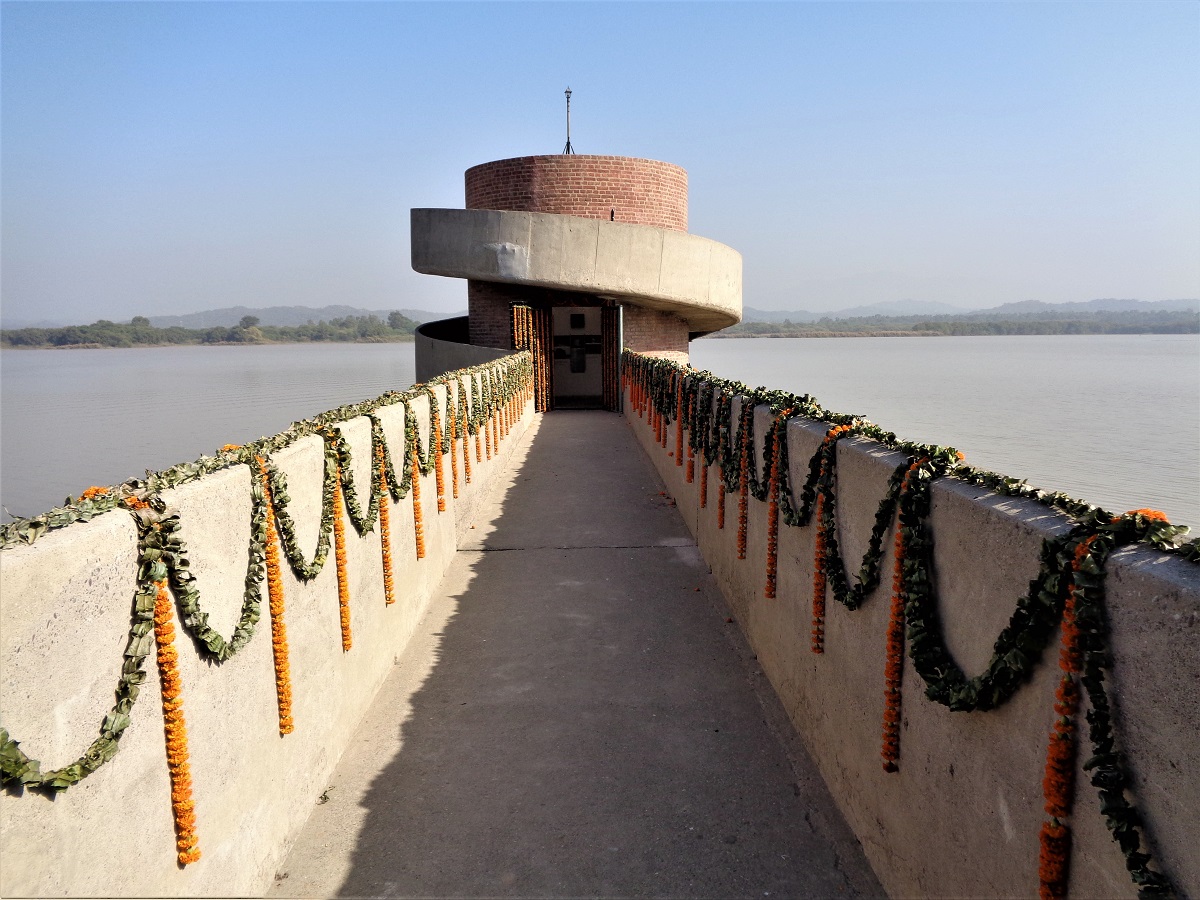 One of the important landmarks of Chandigarh's famous Sukhna Lake is a cylindrical structure in brick, standing conspicuously in the water and is accessible by a concrete bridge. This eye-catching structure was designed by Pierre Jeanneret to accommodate a water pump. A ramp encircling the building and leading to the terrace adds to its sculptural beauty. In spite of its architectural grandeur, the building remained unused and locked for the last about three decades. 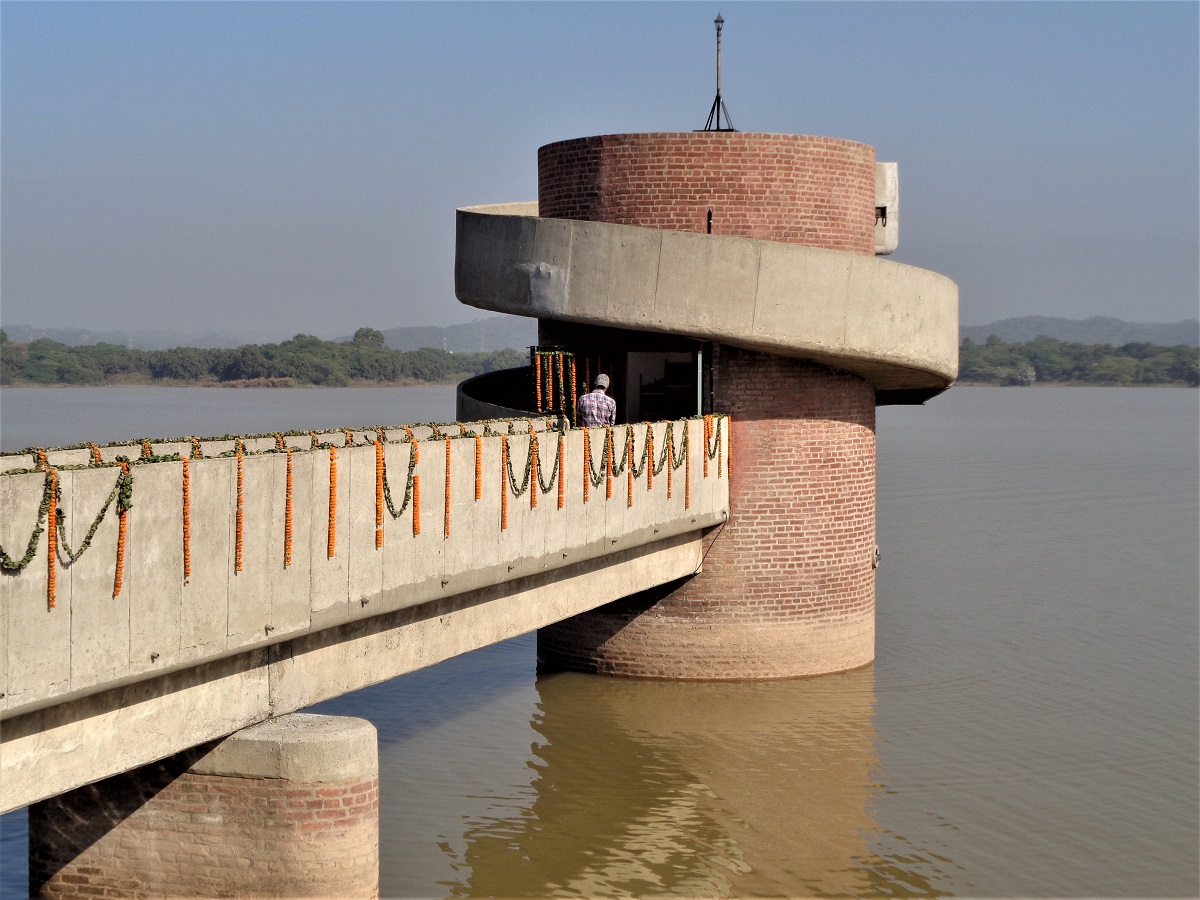 Recently the Chandigarh Administration has come up with an innovative idea of converting the building into an Interpretation Centre dedicated to Sukhna Lake. The structure was renovated and restored to its original glory and display panels depicting the history of the lake were incorporated in it. 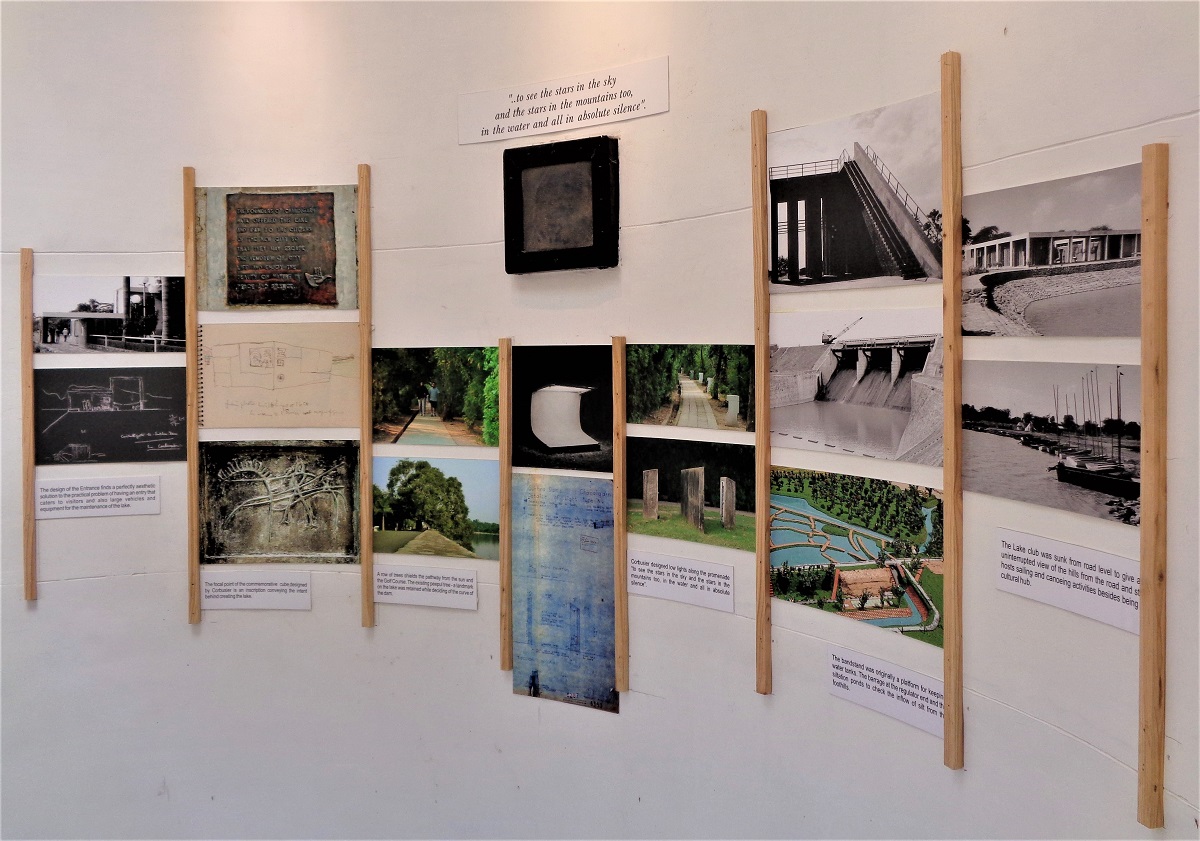 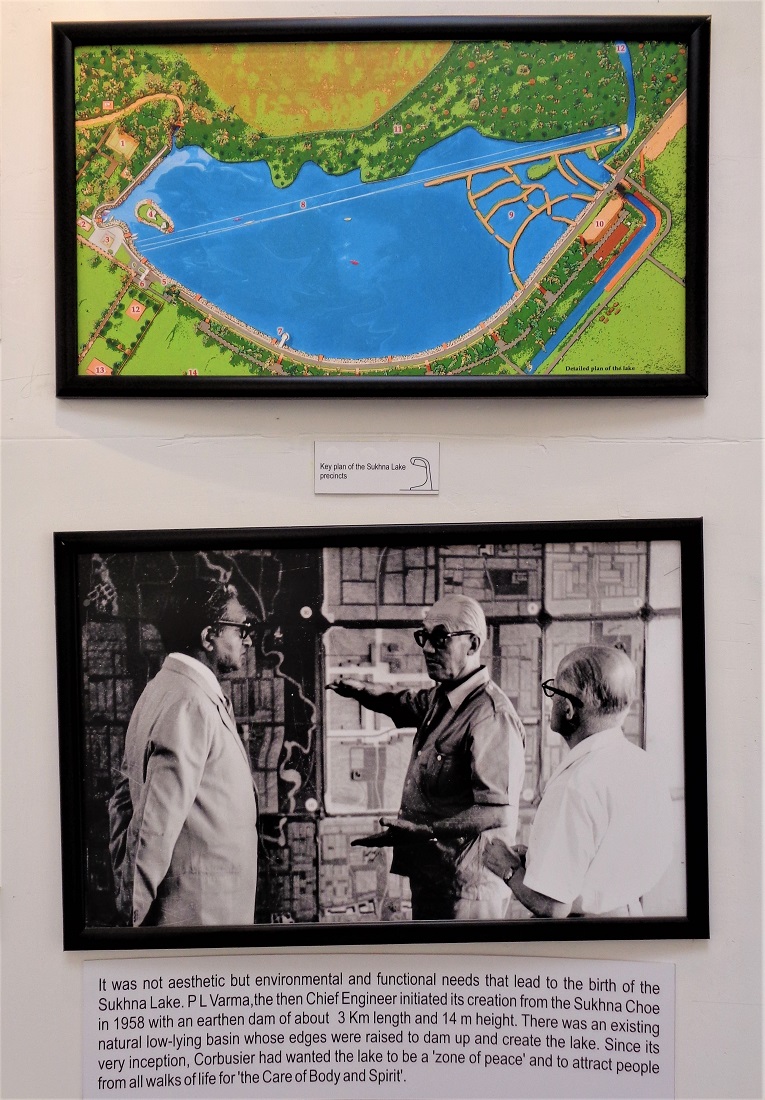 The "Sukhna Interpretation Centre" as it is called now, was inaugurated by Manoj Parida, Adviser to the Administrator of Chandigarh on 4th December 2019 commemorating Pierre Jeanneret's 52nd death anniversary. Present on the occasion were eminent architects of the city and senior officers of the Chandigarh Administration.

The proposal for setting up this centre was mooted by Deepika Gandhi, Director, Le Corbusier Centre, Chandigarh. The authorities endorsed the idea and instructed the Engineering Department to undertake the restoration and repair of the brick structure. During the restoration, a skylight which was closed some years back was opened to let in natural light in the room. Deepika Gandhi informed that even ventilators were very innovatively designed and were starting point for her conception of the display of exhibits. Gandhi curated the images and text for display in consultation with Professor Rajnish Wattas. 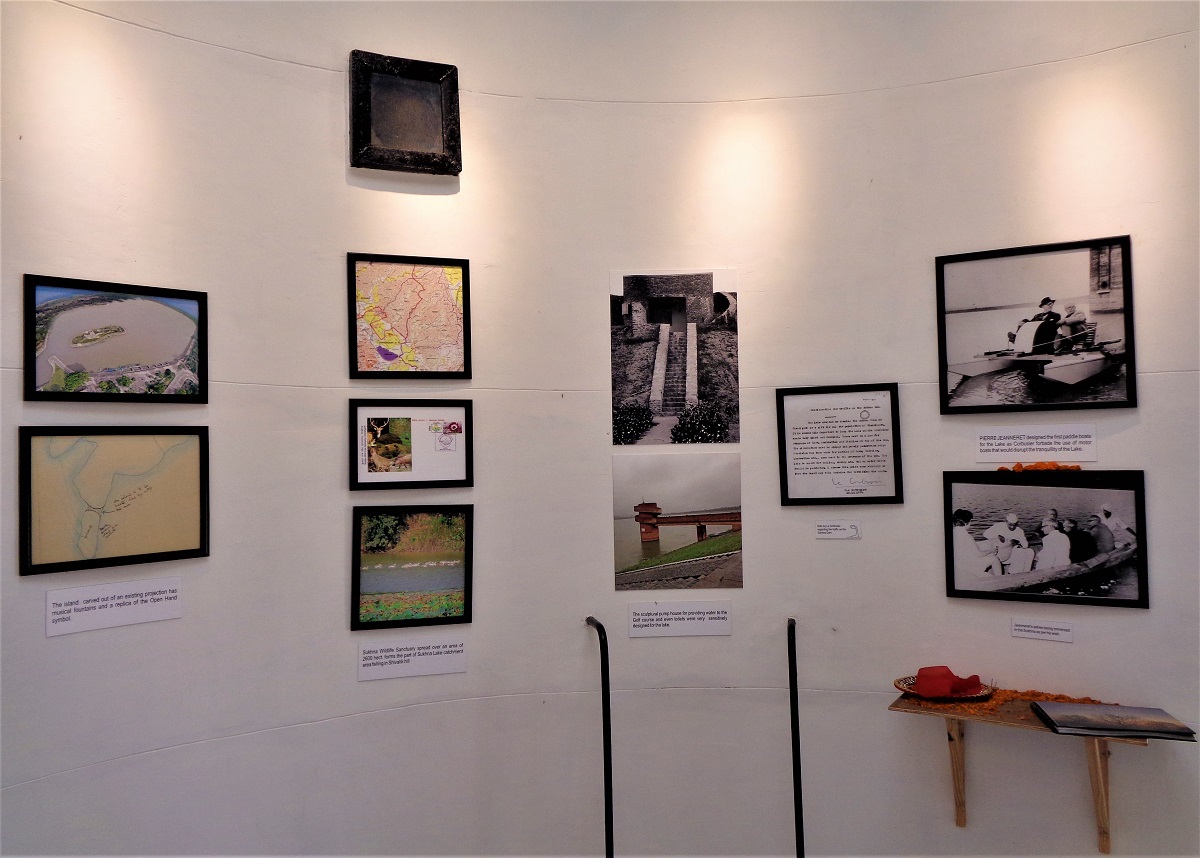 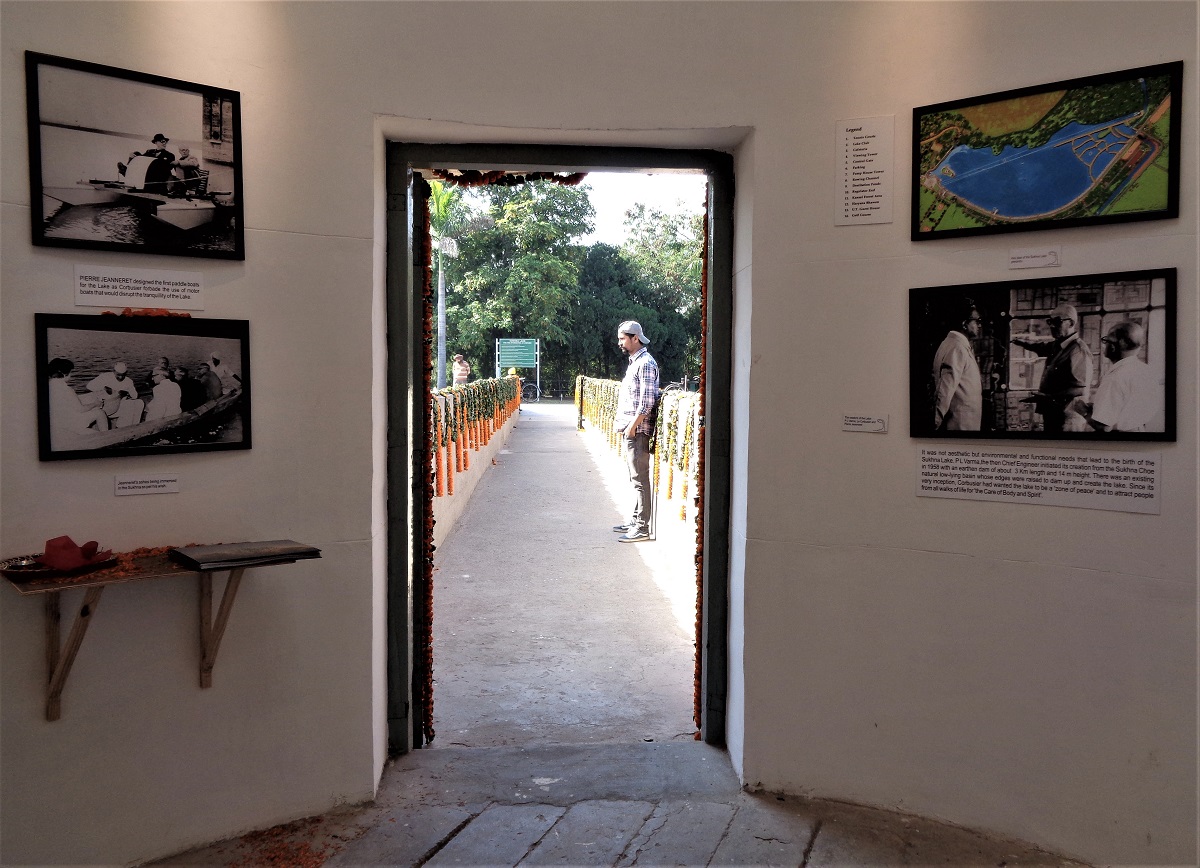 The exhibits attempt to capture the essence of the lake in around 30 panels starting from the creators of the lake to its lesser-known components like the light fixtures and entrance gate. The display is an interesting mix of vintage pictures, drawings and sketches to highlight the thought that went behind each element. The display was a challenge due to the circular shape and small size of the room, that is, 12 feet in diameter. 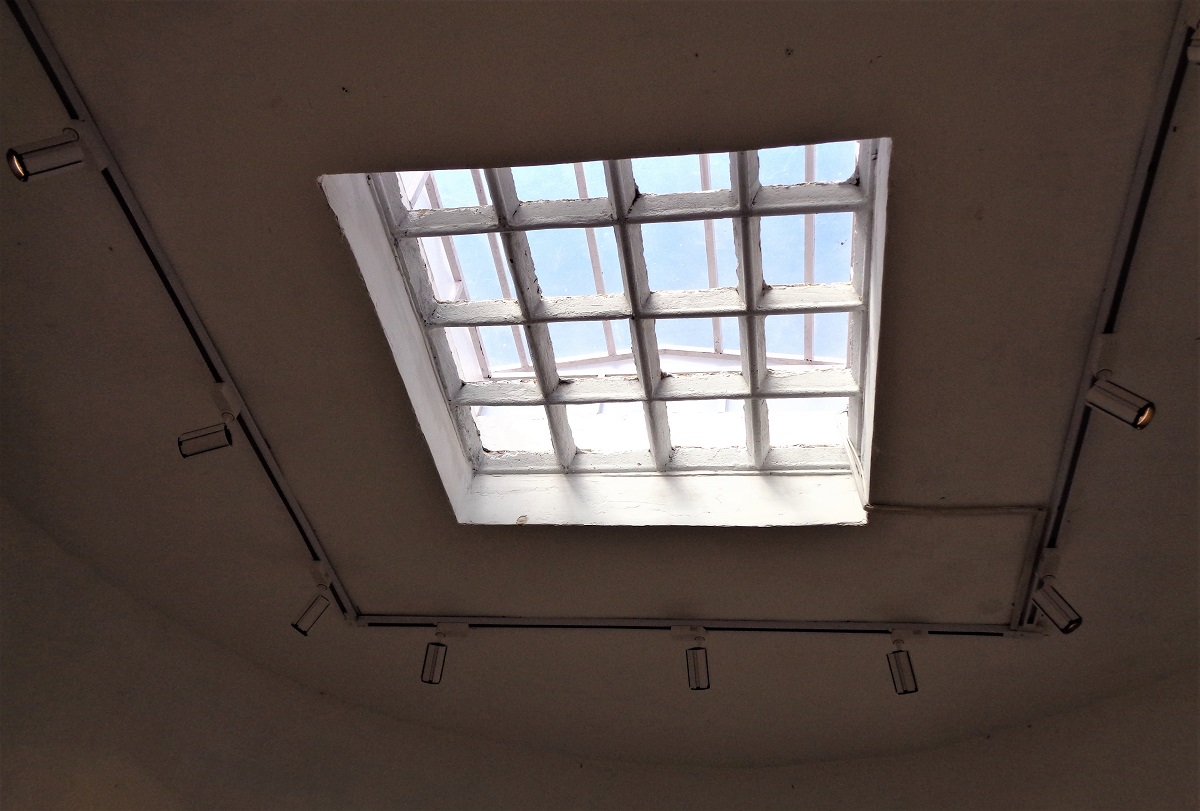 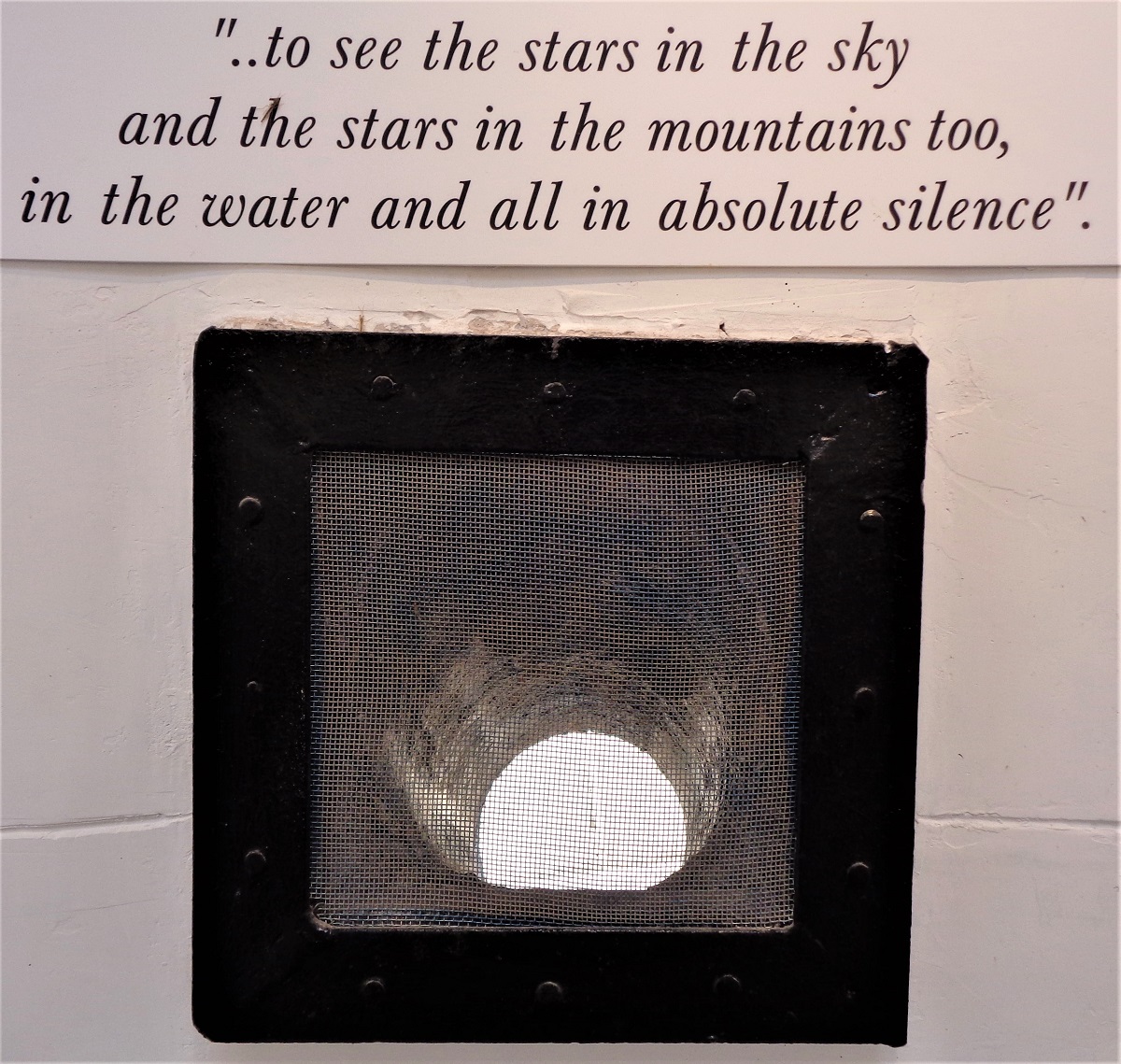 Manoj Parida expressed his pleasure at this successful venture at preserving the heritage of the city. He hoped that the centre shall become another landmark in the city and sensitise citizens and tourists about the Sukhna Lake as an important part of the city's legacy. 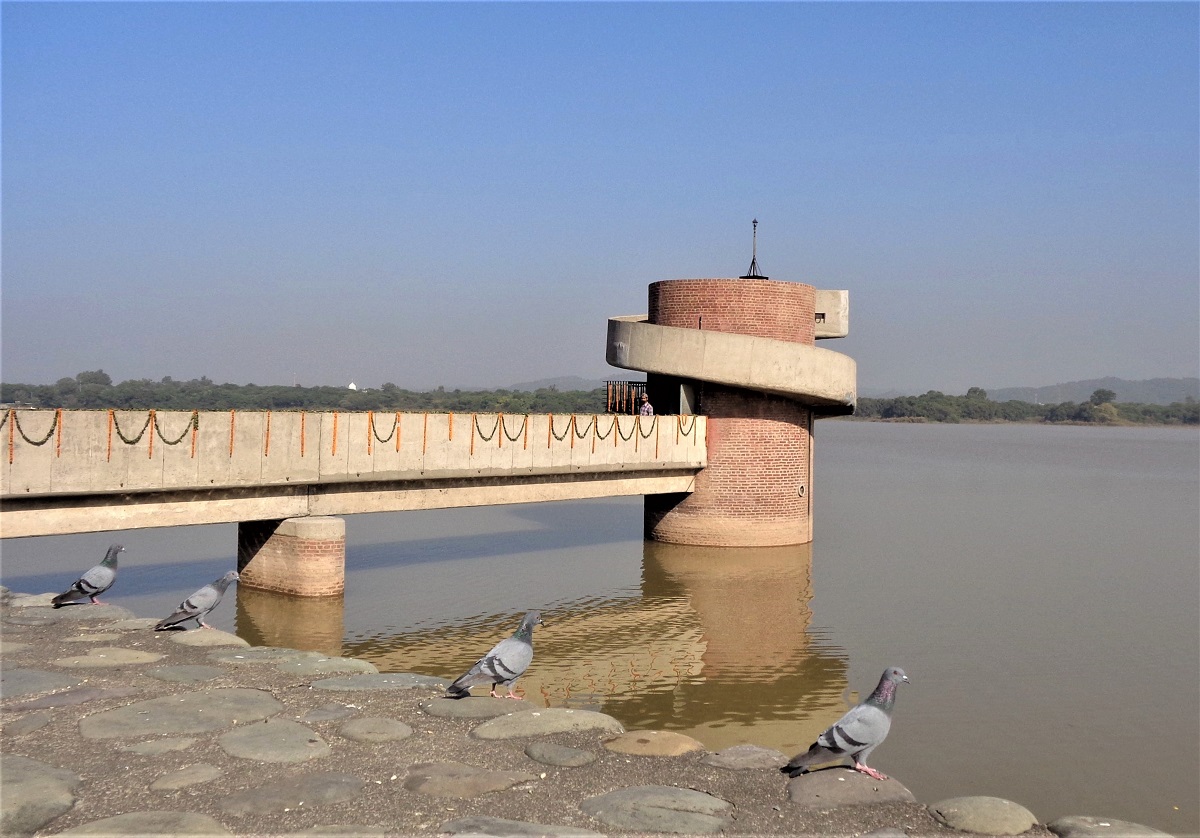 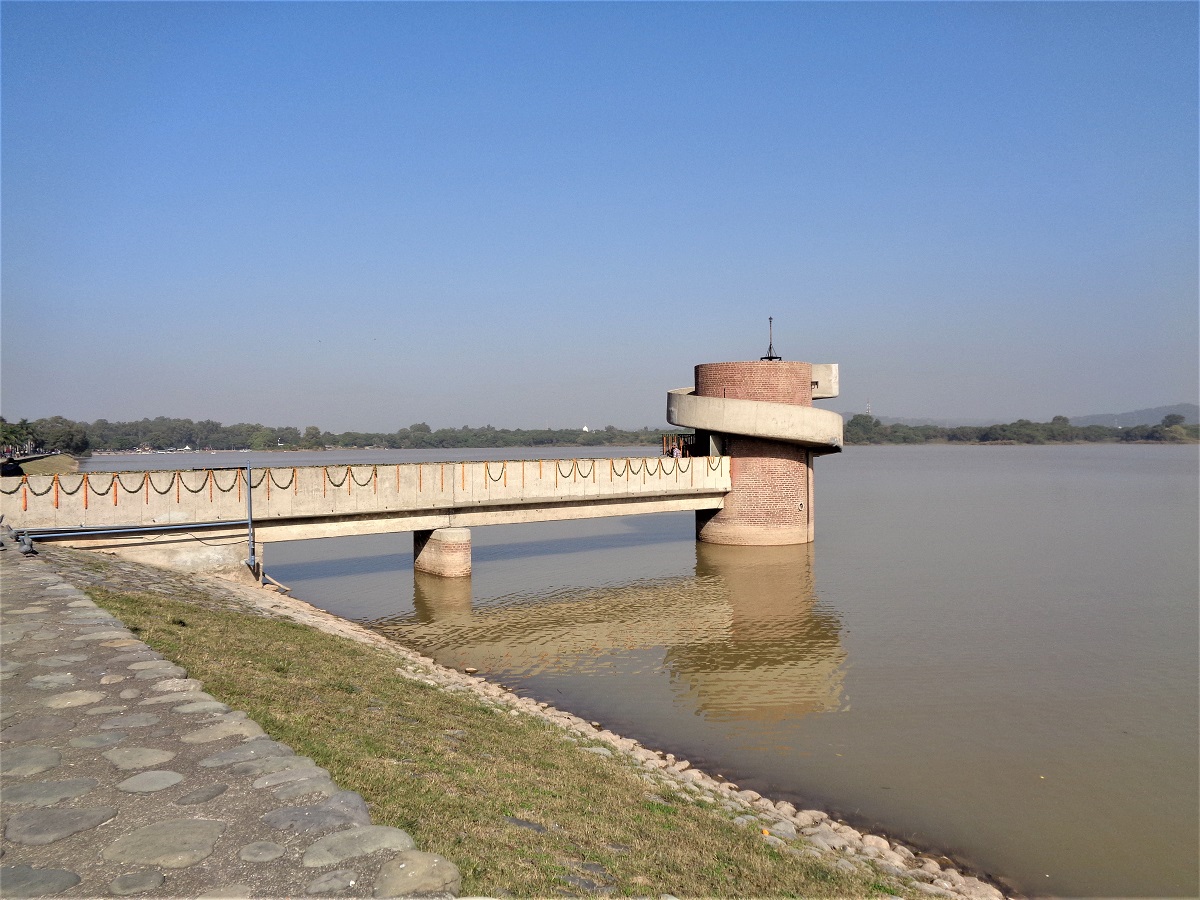 Sukhna Lake is one of the most important components of Chandigarh's master plan prepared by Le Corbusier. According to the inscription on a concrete cube at the lake,  "The founders of Chandigarh have offered this lake and dam to the citizens of the new city so that they may escape the humdrum of the city life and enjoy the beauty of nature in peace and silence." 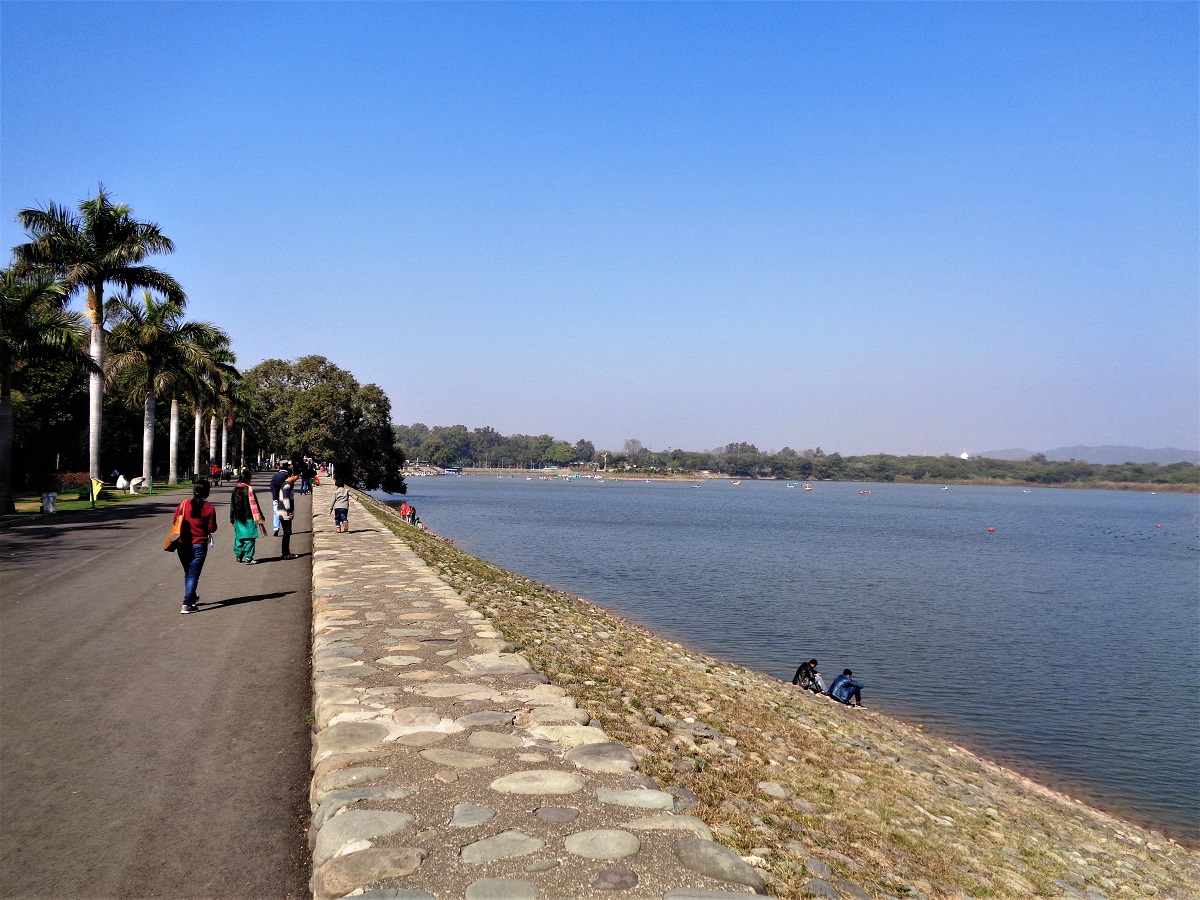 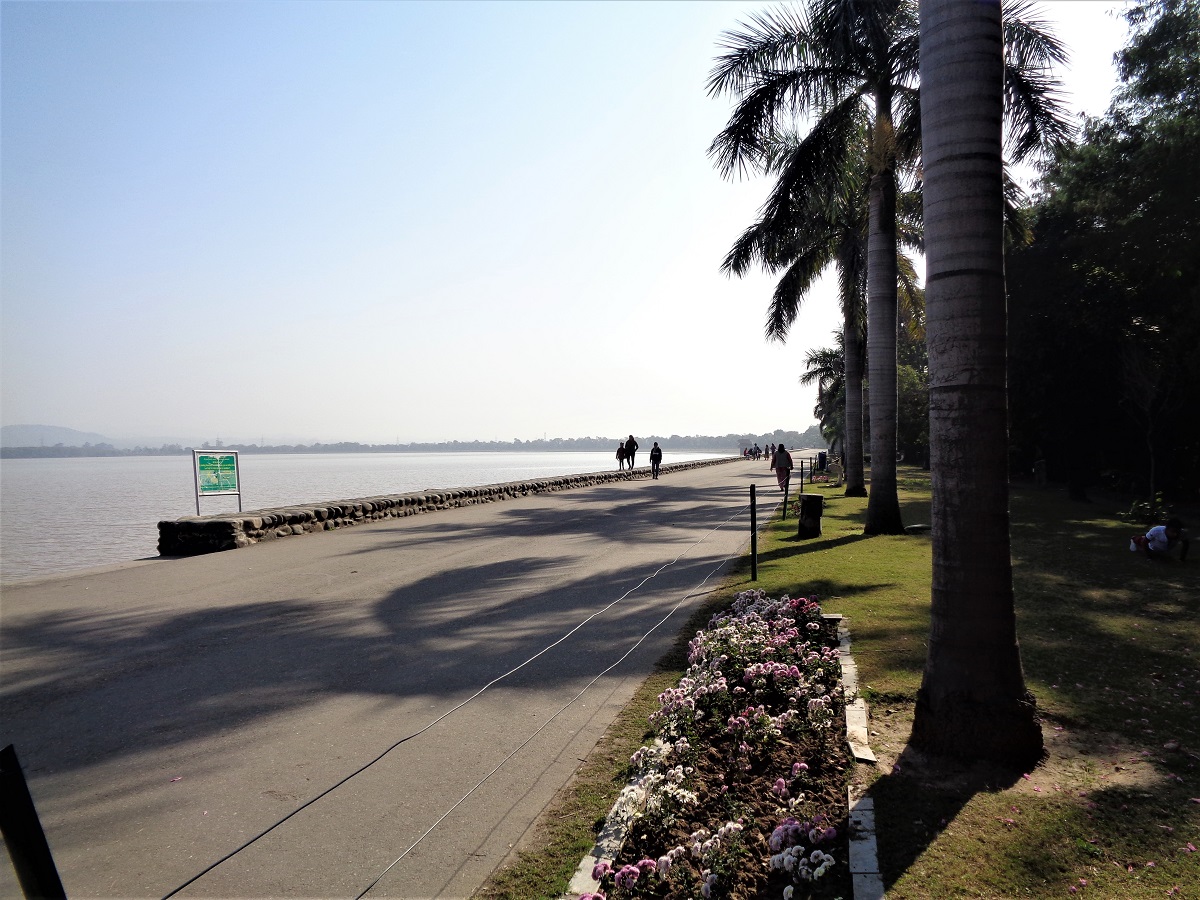 Le Corbusier had foreseen that the residents of the city would be drawn to this 'zone of peace' for the 'care of body and spirit'. He insisted that no motorboats be allowed in it and that no bicycles, cars or buses be permitted on the dam. In 1958, the lake was created by constructing an earthen dam about three-kilometre long and 14-metre high across the Sukhna Choe, a seasonal rivulet to the north-east of the city.

The catchment area of the lake is 4207 hectares, out of which 3312 hectares are in the area of the Shivalik Hills and remaining in three villages, Kaimbwala (UT), Kansal (Punjab) and Saketri (Haryana). Le Corbusier designed a gateway to the lake as well as memorial stone commemorating the construction of the dam. 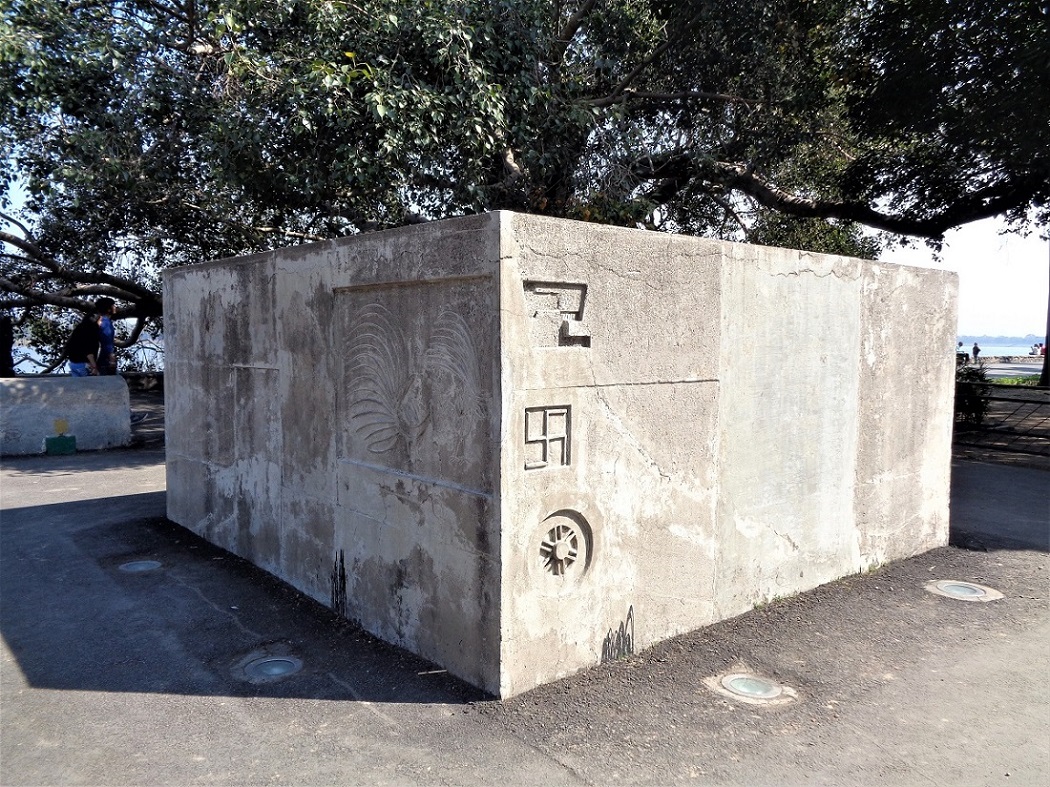 Commenting on the beauty of the Sukhna Lake, Jeet Malhotra says, "The earthen dam, pitched with stone, is curvilinear in form and is in full harmony with the natural surroundings. Despite being artificially formed it can easily compete with any natural lake in its superb serenity and picturesque settings lent to it by the ever-changing colours of mountains, standing almost on its edges." 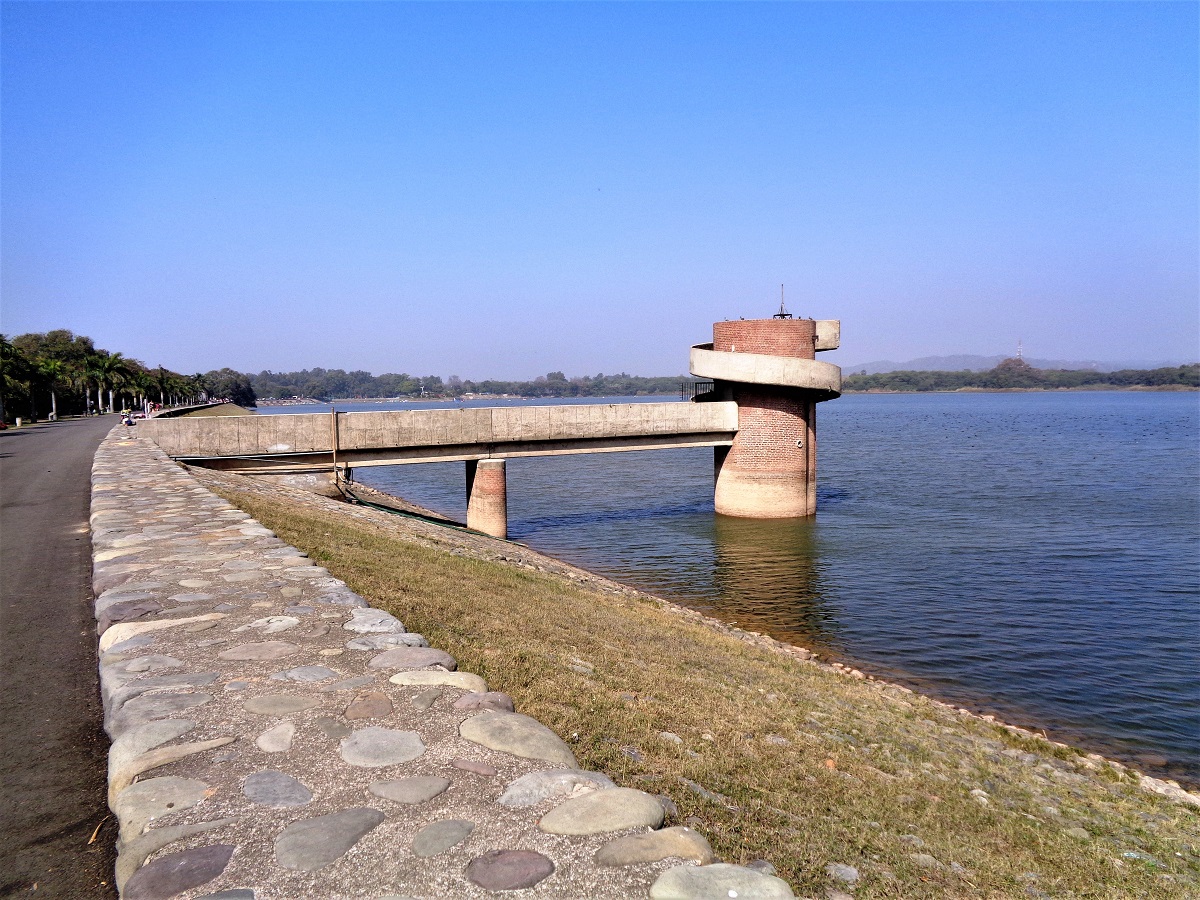 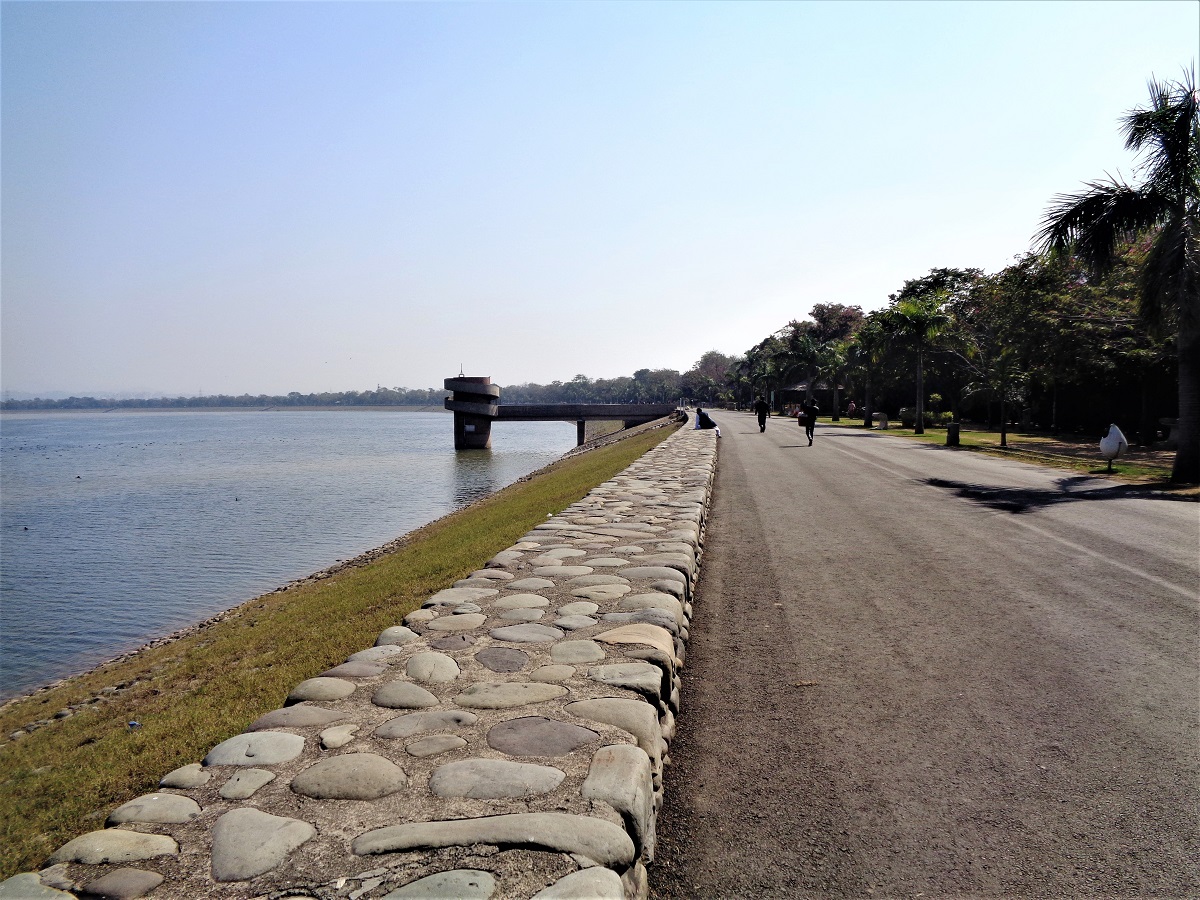 The serenity of the vast spread of water of the lake soothes the eye of the visitor. On sun-scorched summer days, the cool breezes refresh tired spirits. At each hour of the day, the lake offers a different view, a variegated quality of light which like a kaleidoscope is ever-pleasing and ever-new to its beholders. The curvilinear profile of the southern bank of the lake seems to merge into the Shivalik Hills. 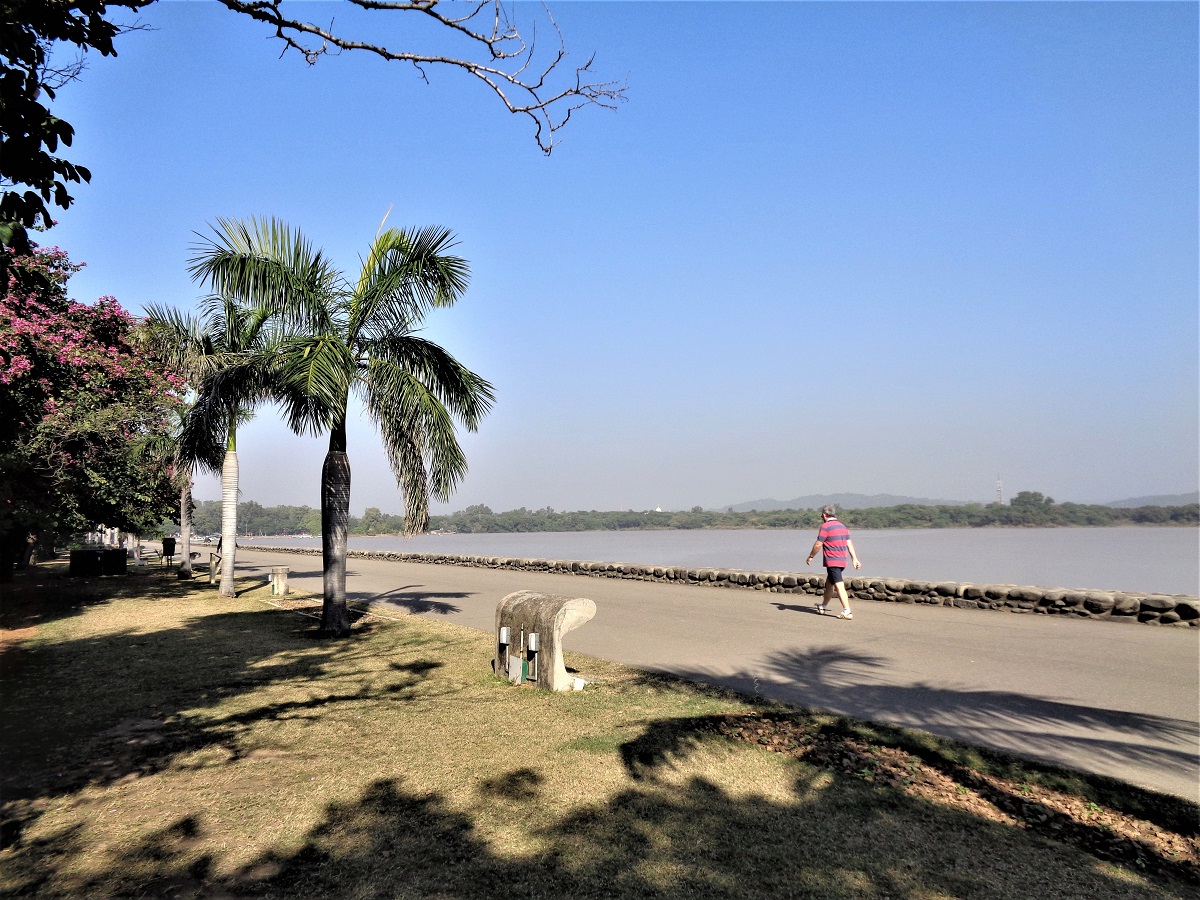 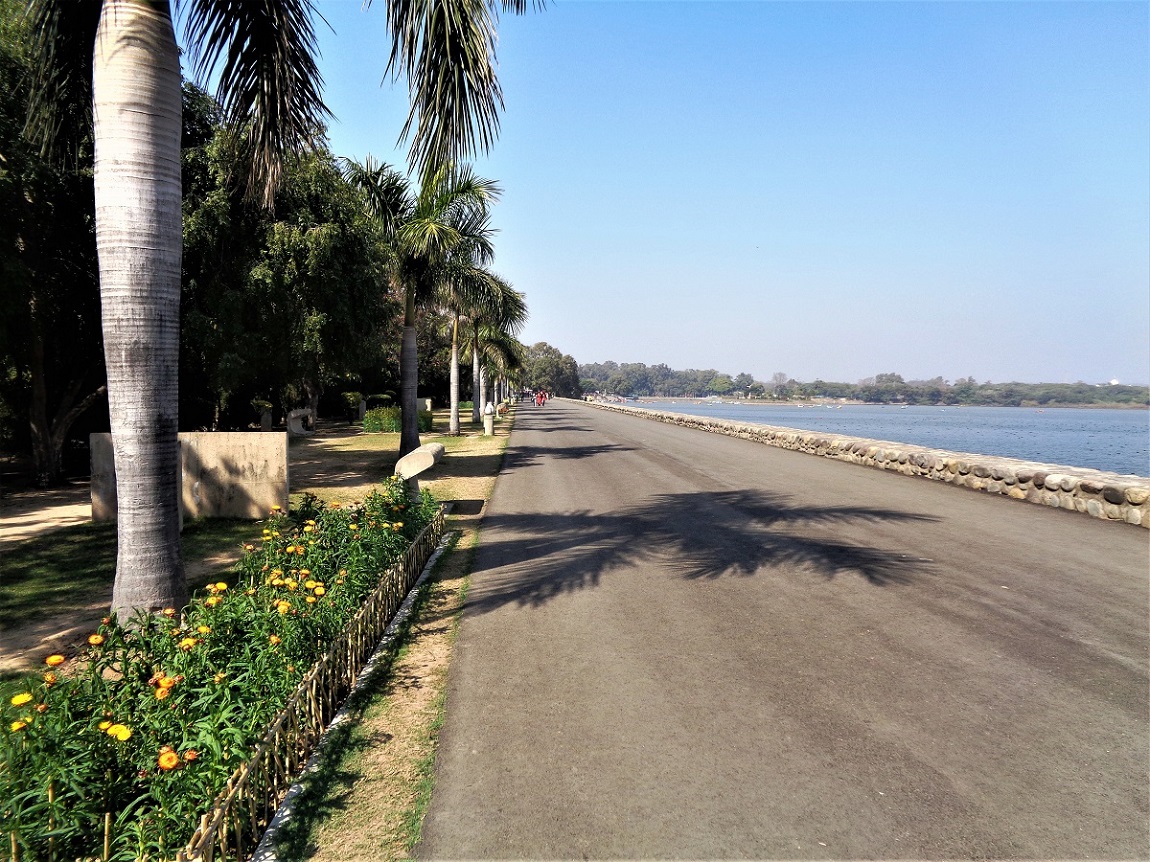 The lake embankment, made of piles of boulders hold the Sukhna water in a wide embrace. Strollers and joggers have the splendid view of the jagged profile of the mountains which advance along the lake waters. Residents and visitors gather here for picnics, sports lovers came for boating, sculling and yachting. It also plays host to flocks of migratory birds. The lake has become a major tourist spot and an important stopover on the itinerary of visitors to this part of the country. 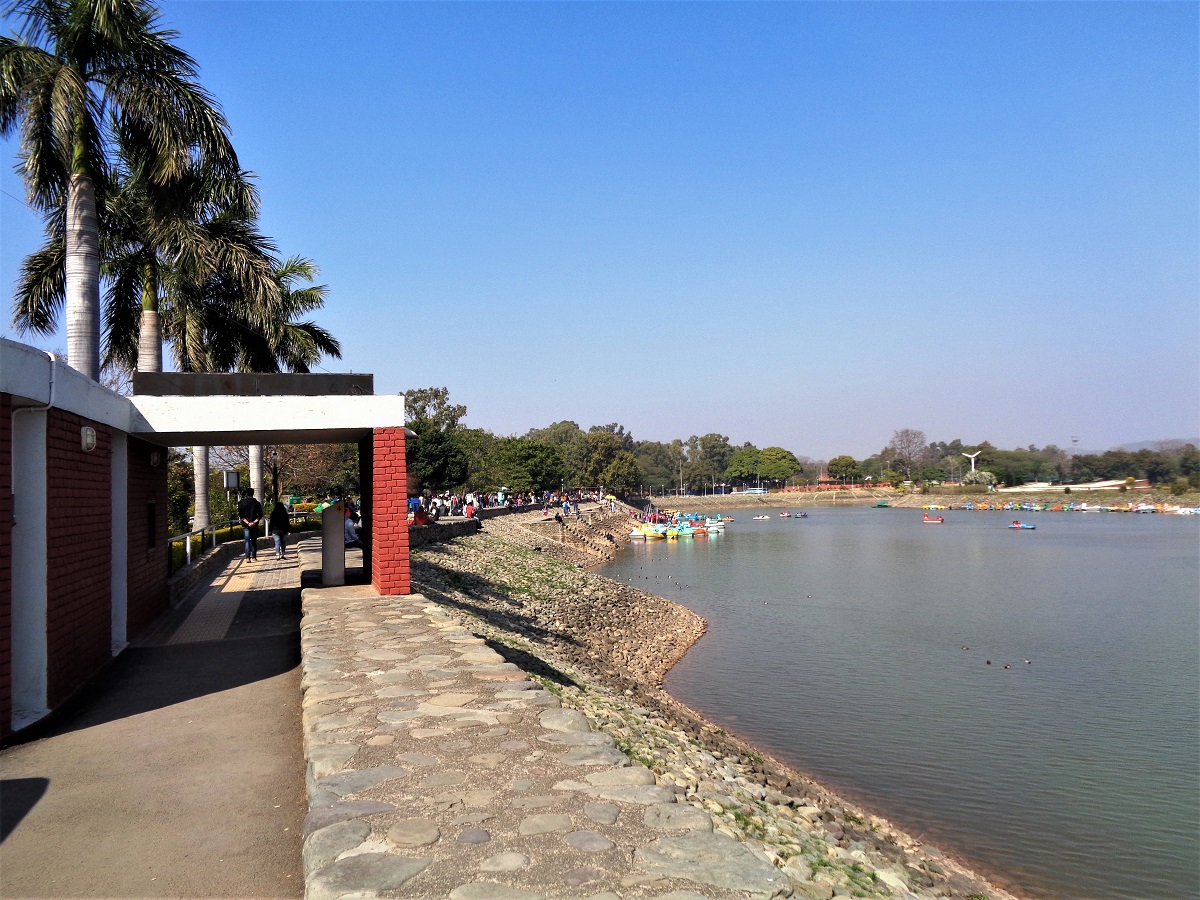 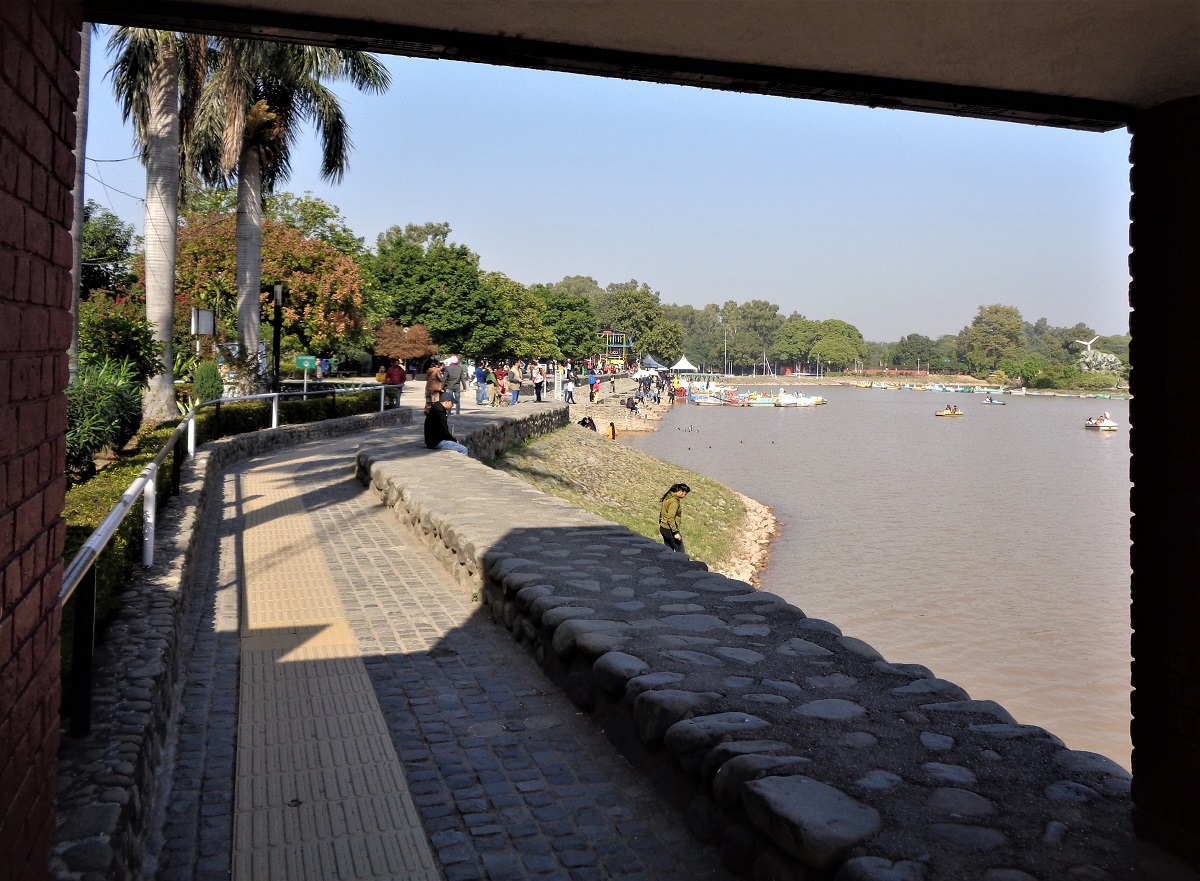 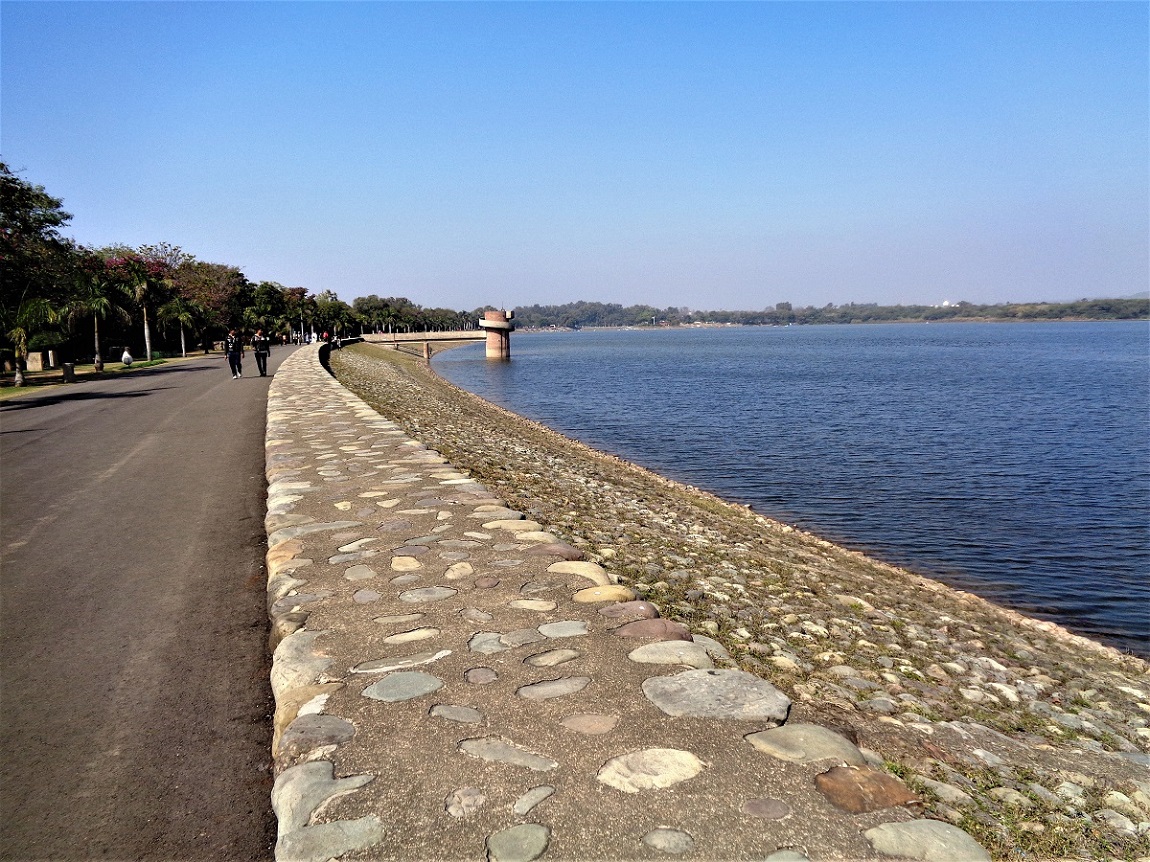 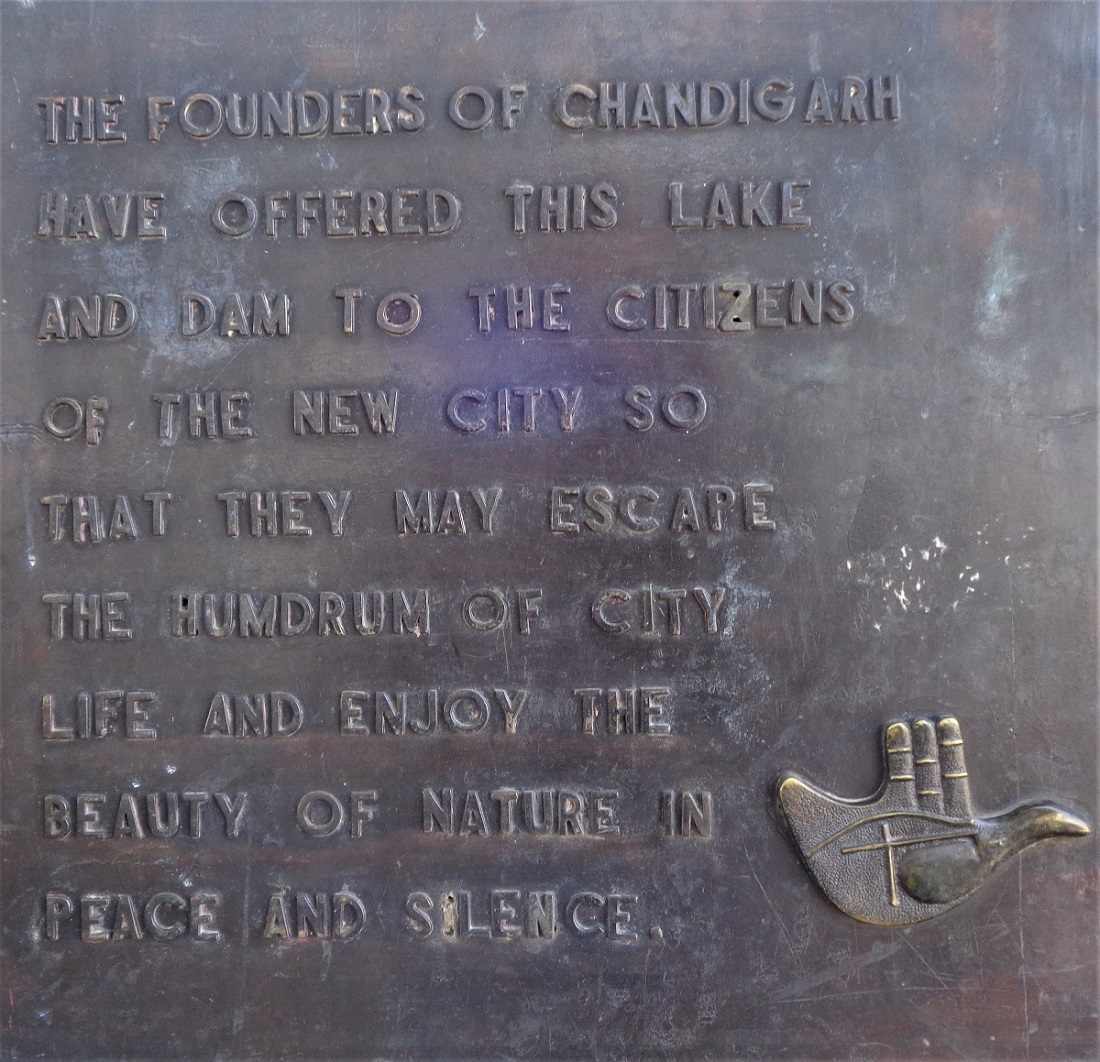 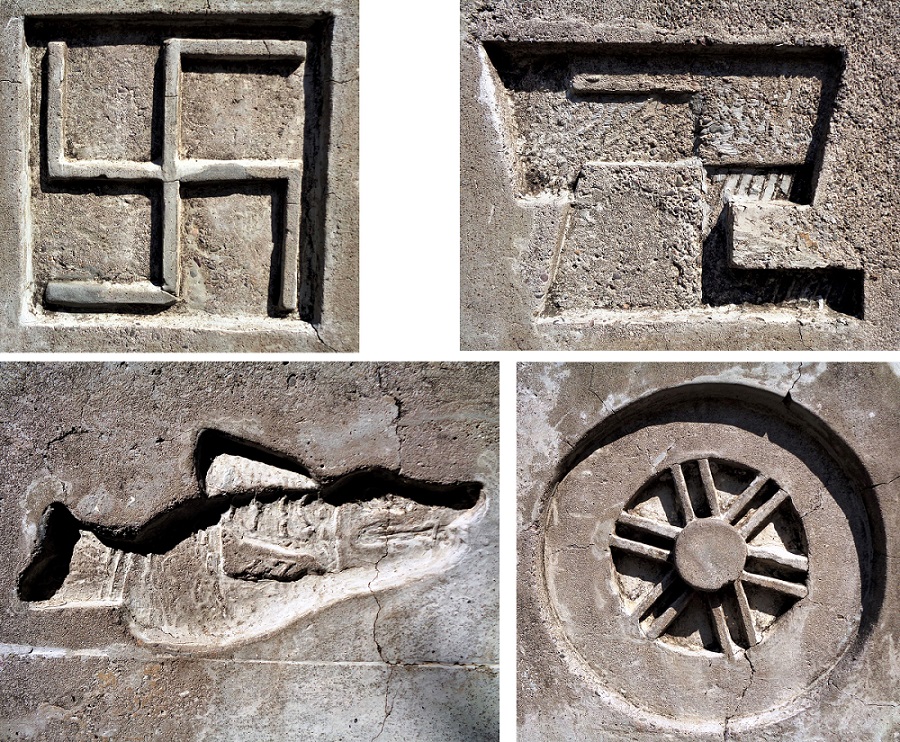 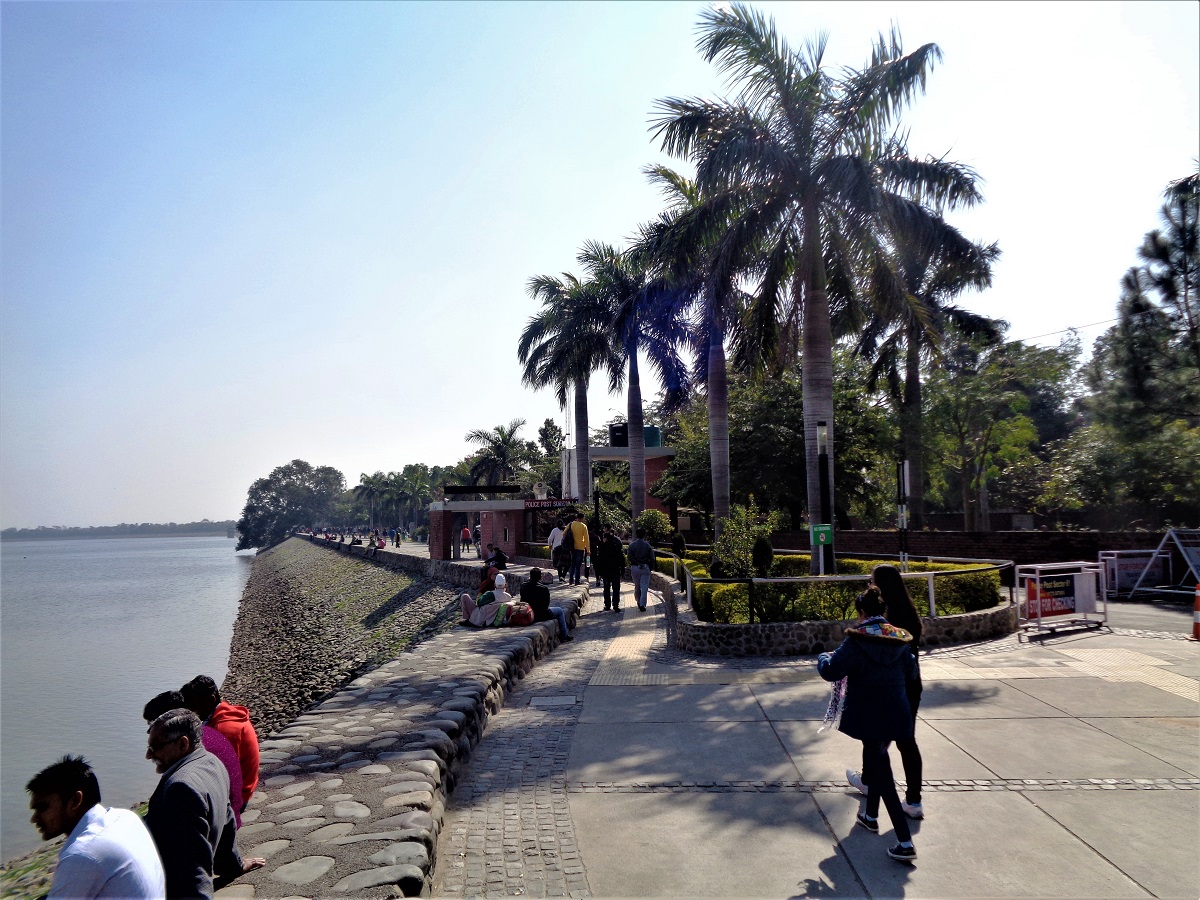 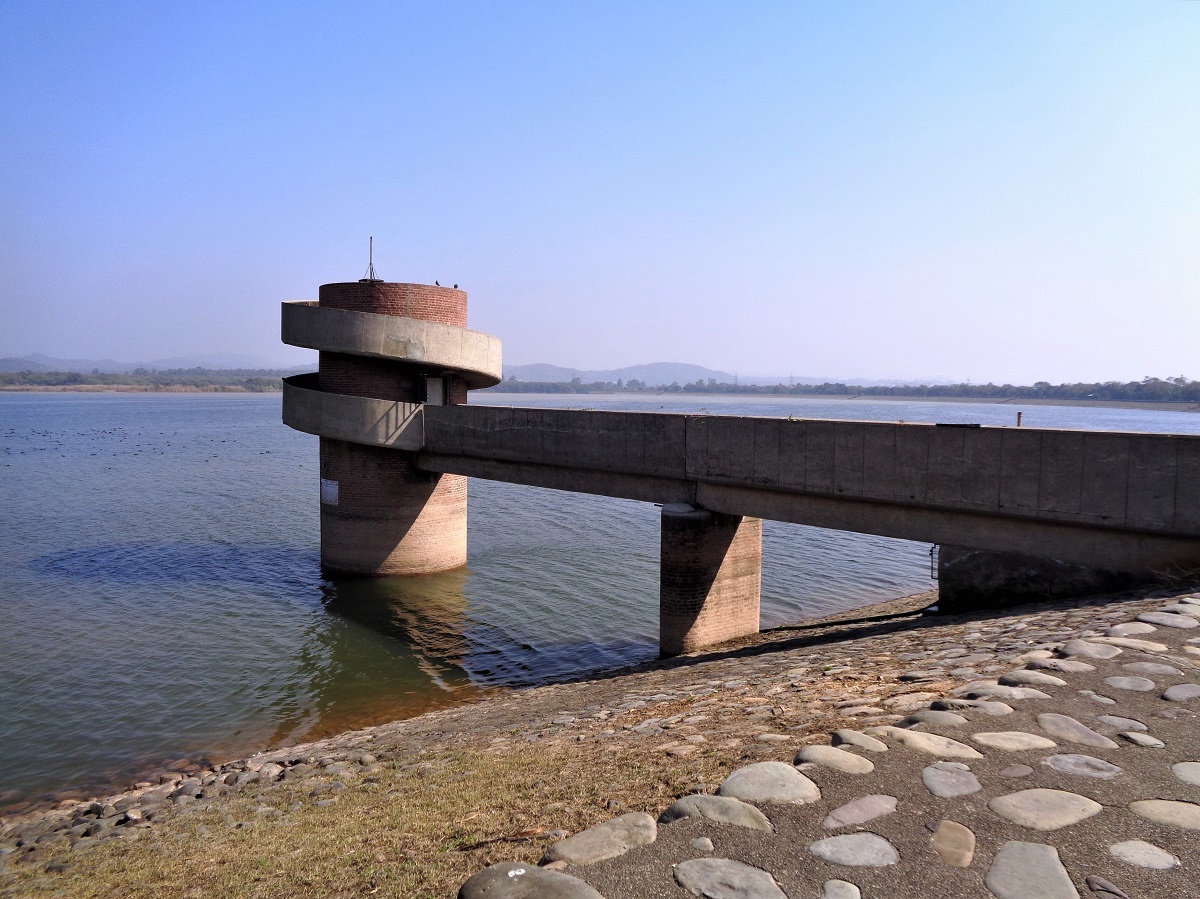