ARCVS to design multifunctional bridge over the River Danube in Serbia 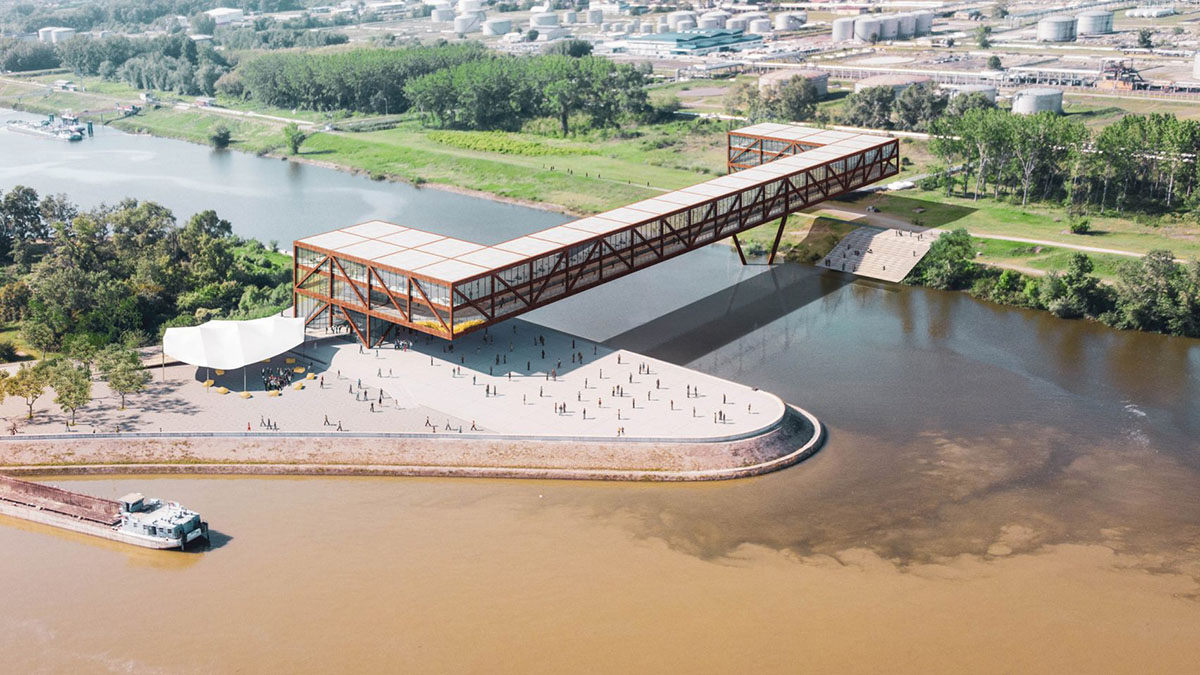 Belgrade-based architecture firm ARCVS has won a competition to design a multifunctional bridge which will span over the River Danube in Novi Sad, Serbia.

The new building, called Elbow Shadow Bridge, spans on 200 meters and a width of 6 meters - will function as both a hotel and office building as wells a pedestrian walkway. The new building will also act as a gateway for pedestrians and cyclists between the city's late-17th-century Petrovarad in Fortress and its port. 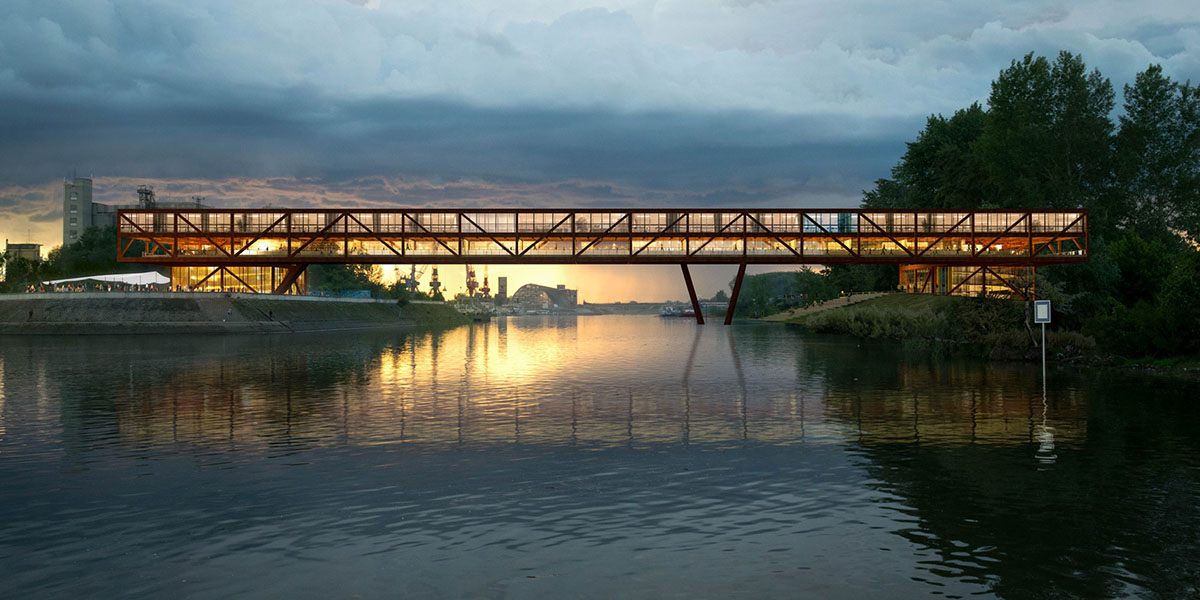 The studio takes references from European influences such as the Ponte Vecchio and Rialto Bridge offering vernacular responses to the river channels.

Its exoskeleton is made from corten steel and includes structural trusses on the façade to blend in existing environment surrounding the river. The pedestrian walkway is designed on the lower level, while hotel and office spaces are placed at above levels. 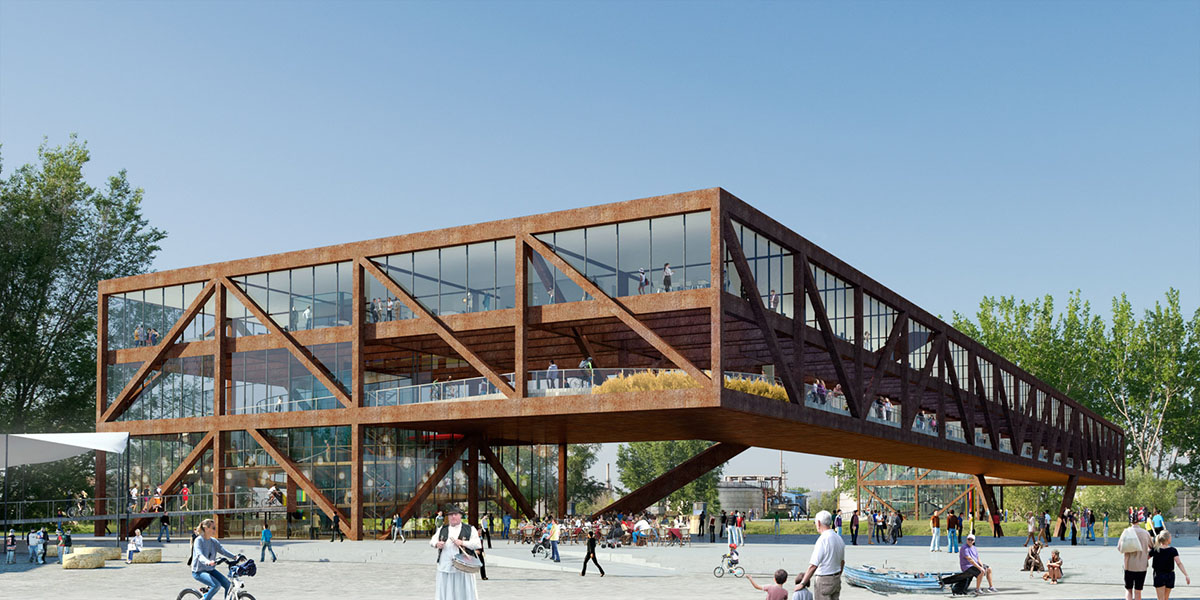 Positioned 30 meters downstream from the nearby industrial port, visitors will be able to experience the surrounding environment while cycling on the bridge, that's why, the design was turned from “the status of the static, centric observer to the status of eccentric, forward-leaning observer," said the firm.

For the construction system, the architects take references from the old Varadin Bridge destroyed in 1999. The bridge will include 4,000-square-metre office-hotel functions sitting alongside a pedestrian-cycle-infrastructure bridge. 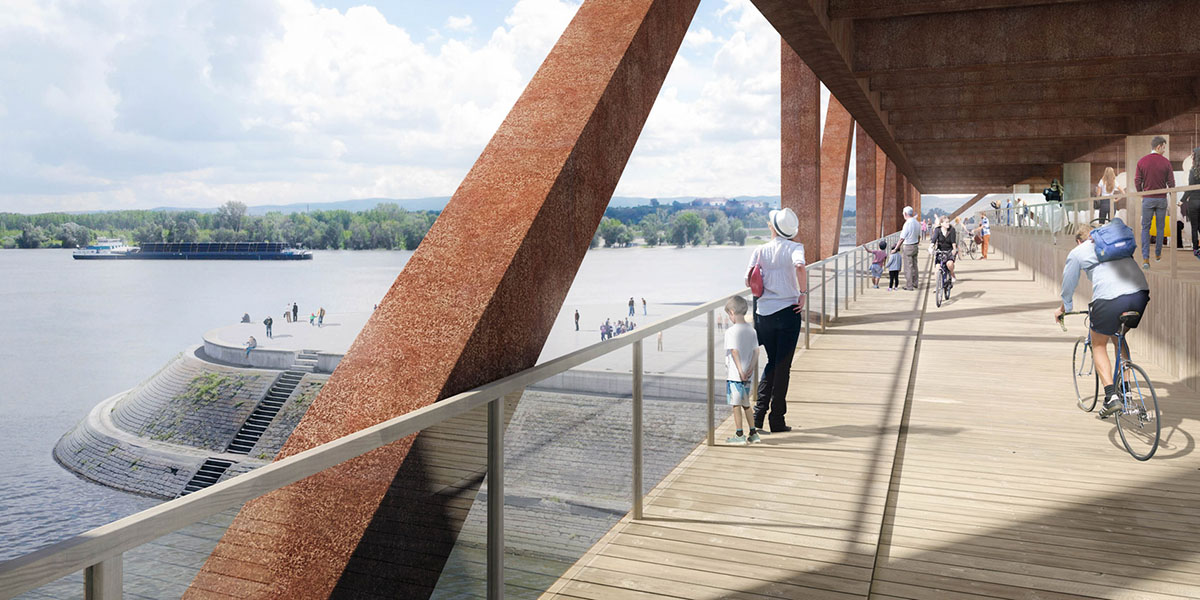 Conceiving those commercial and infrastructural programs into a single structure, the bridge will also offer a 50% bonus in usable area, as opposed to keeping the functions separate.

The infrastructural of the bridge is mainly transformed into a catering/shopping/observing street overlooking the River Danube waterway from miles downstream. 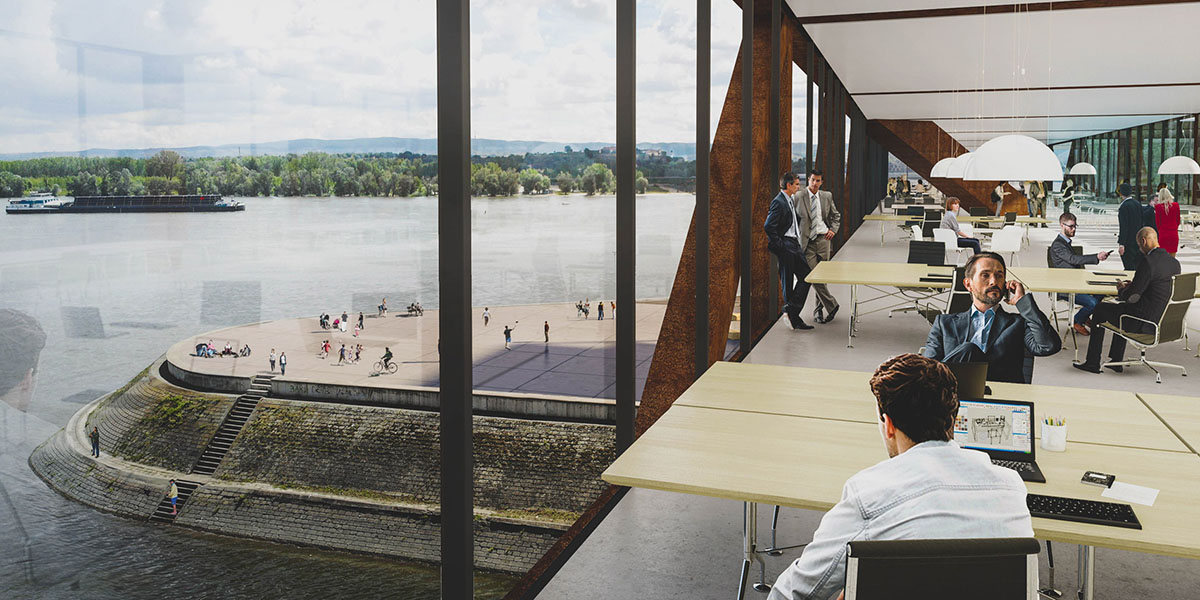 The Elbow Shadow Bridge will entirely be made of a steel lattice - its main body will span 80 meters and height 10 meters, which enables the creation of another level of 2500 square meters area.

The flexibility of the steel latticework will be realized by the use of pre-fabricated partitions and façade panels. Clearance height for the waterway determined the overall height of the bridge at 8m from the shores of the canal which are raised to the levels required for the flood defense. The architects also designed some spiral ramps on both sides which were the only way to reach the height of the bridge in a way that was comfortable for both pedestrians and cyclists. 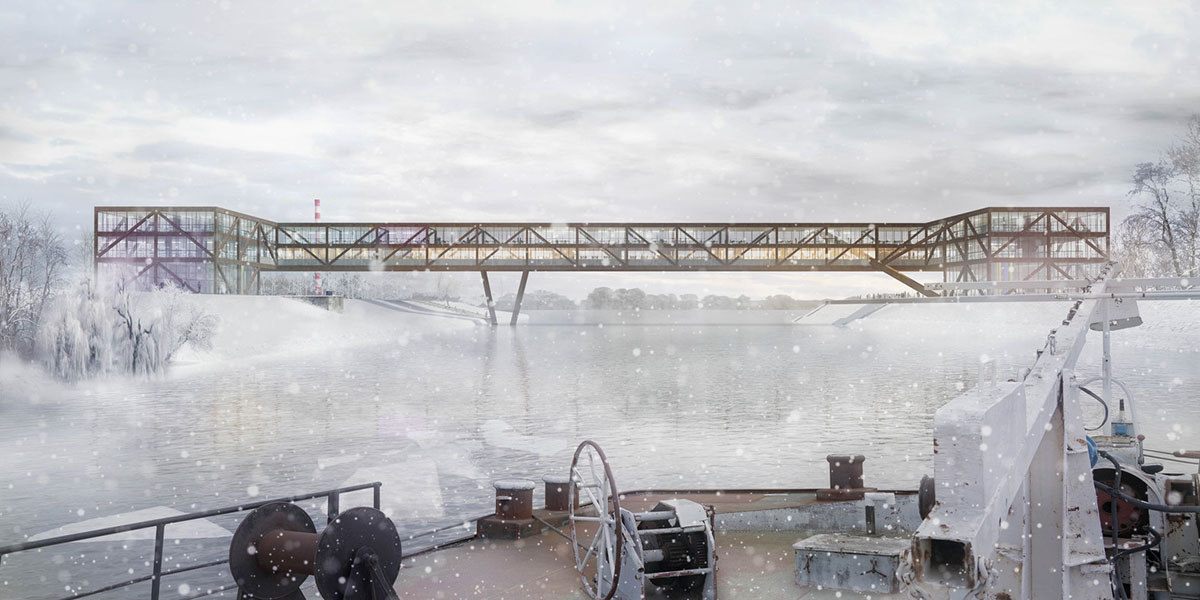 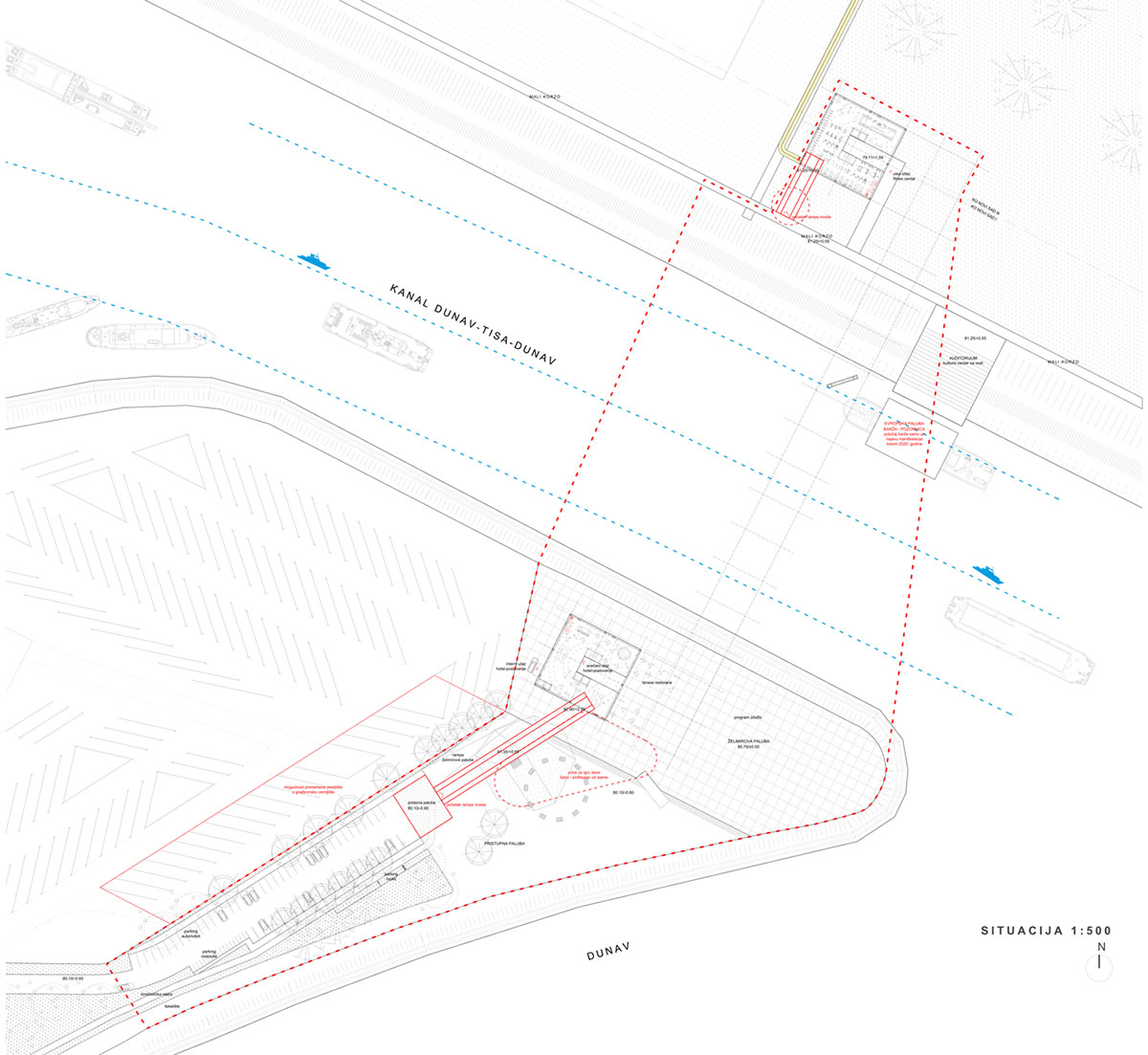 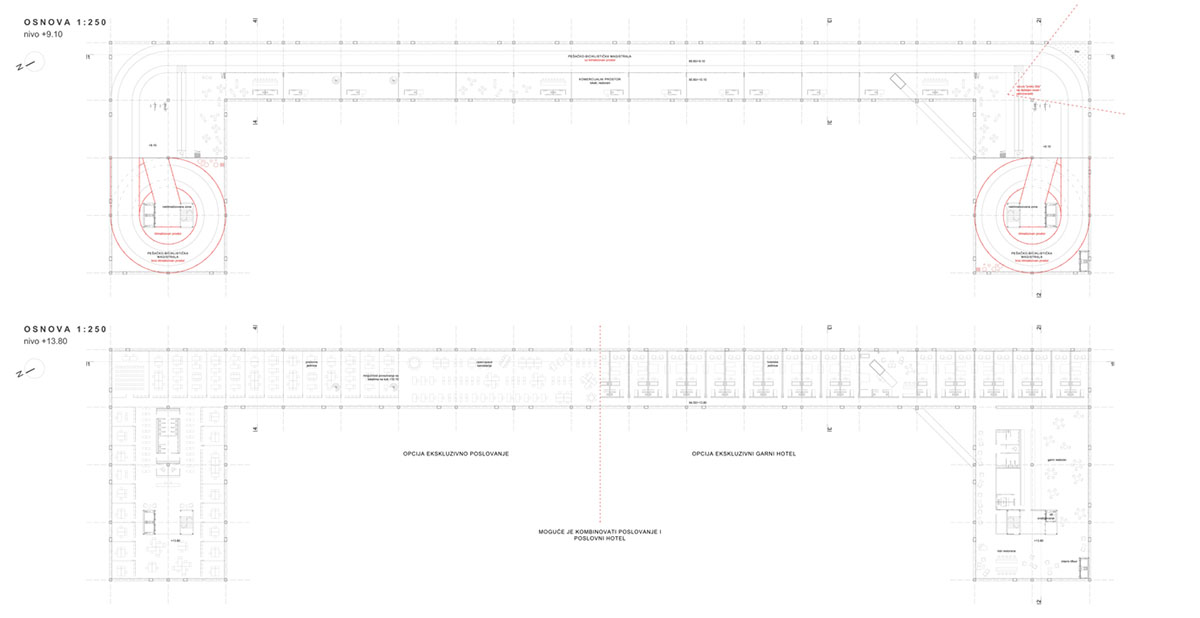