Of India & Aga Khan Award: EDII, Ahmedabad Is One Of The 6 Recipients So Far 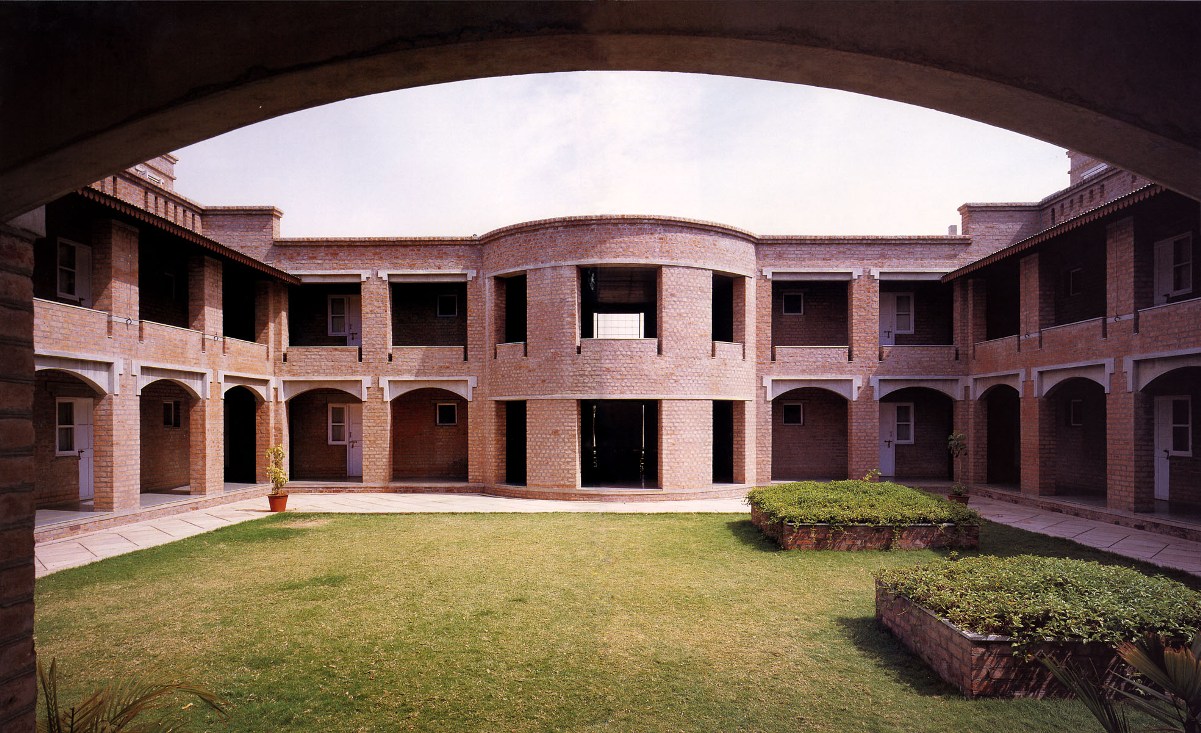 Since its inception in 1977, the Aga Khan Award for Architecture has been given to 114 projects in 13 cycles. Out of these, India got only six awards so far. Keeping in view the quality and quantum of outstanding architectural projects completed in India in the last six decades, this performance is far from satisfactory.

The projects which have been given Aga Khan Award are: Mughal Sheraton Hotel, Agra (1978-80); Entrepreneurship Development Institute of India, Ahmedabad (1990-92); Aranya Community Housing, Indore (1993-95); Lepers Hospital, Lasur (1996-98); Slum Networking of Indore City (1996-98); and Vidhan Bhavan, Bhopal (1996-98). Since none of these projects has been featured on WAC portal earlier, it is our endeavour to publish these projects, one by one, for the perusal of the world architecture community. 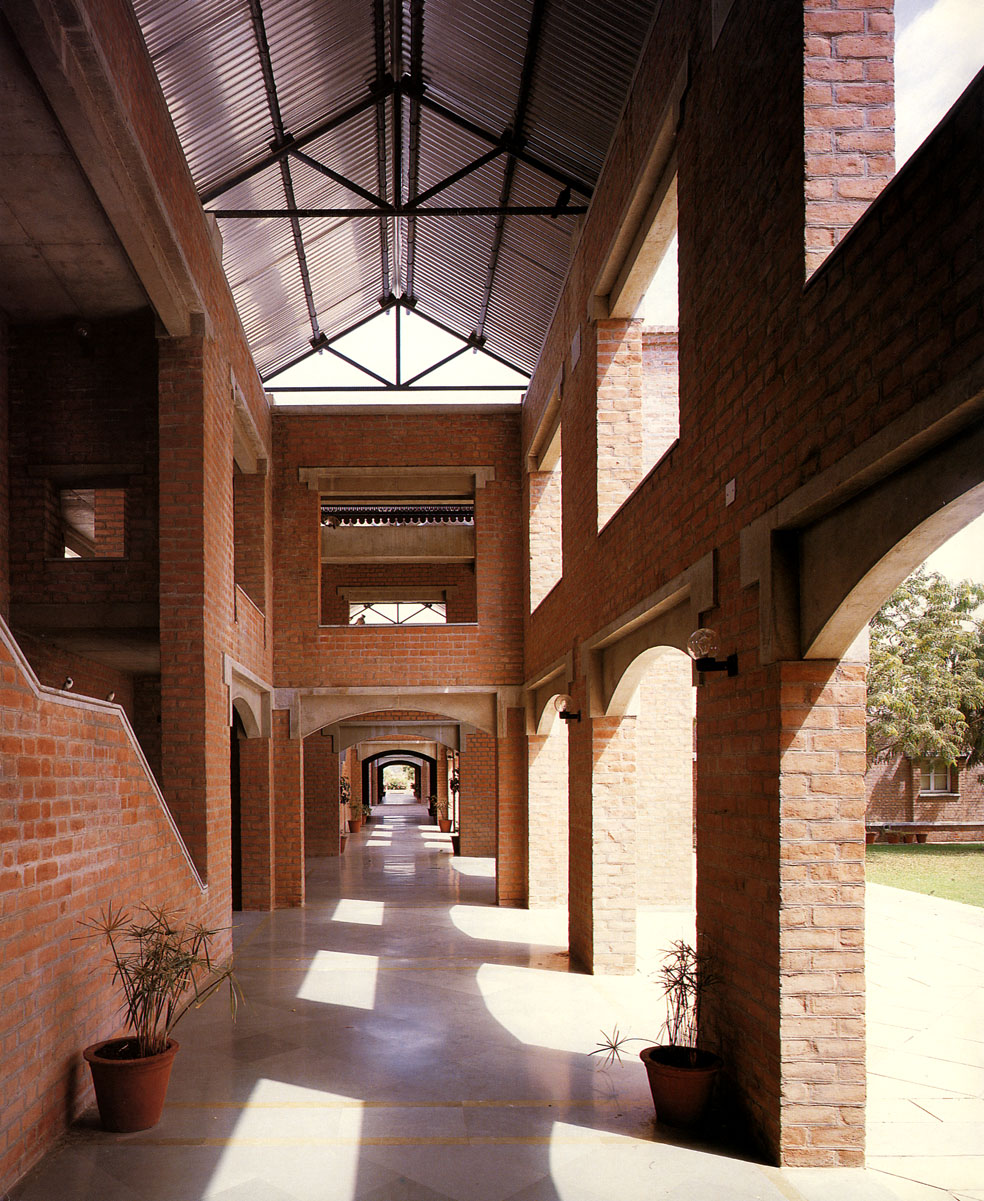 The Aga Khan Award for Architecture was established to recognise outstanding architectural achievements in all the different cultures and communities of the Muslim world. It seeks to identify examples of excellence in all areas of building and design, including social housing, community development, restoration, re-use and area conservation, as well as landscaping and concern for the environment. The Award is given every three years to projects that set new standards of excellence in the above fields. Through its efforts, the Award seeks to identify and encourage building concepts that successfully address the needs and aspirations of societies across the world, in which Muslims have a significant presence.

Entrepreneurship Development Institute of India (EDII), Ahmedabad designed by Bimal Hasmukh Patel is one of the six projects which have been bestowed with the prestigious Aga Khan Award for Architecture in 1992. Constructed in 1987, the Institute is located on the outskirts of the city of Ahmedabad. 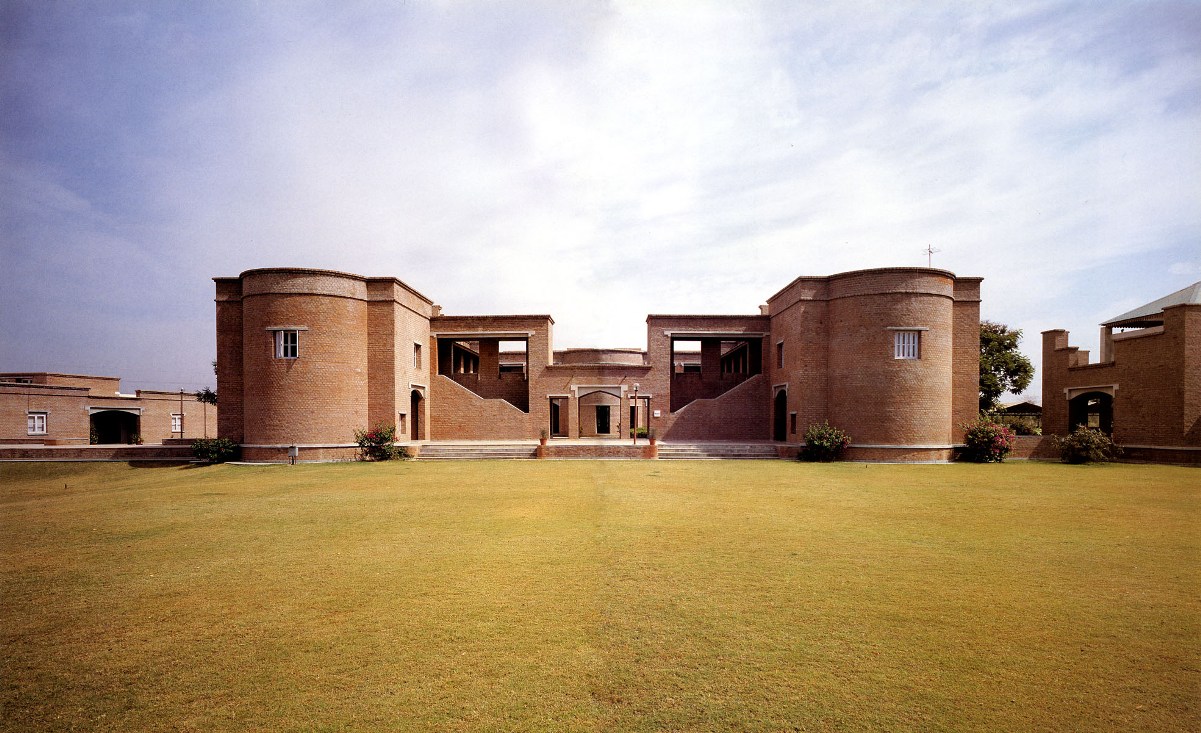 The campus has been planned on 23 acres of land and it has a built-up area of 6,820 square metres in the first phase. The Institute is composed of seven buildings connected by two axes which are perpendicular and converge on the entry pavilion. These buildings comprise an administrative block, training centre, research centre, library, two hostel blocks, and dining hall.

The Aga Khan Award Jury's citation explains this project as, "This innovative programme in education and training in entrepreneurship is housed in an open, congenial campus. The fruitful collaboration between the director of the Institute and the architect produced a fine example of a low-cost, low-maintenance building which promises easy replicability. The architect is commended for his confident use of formal elements growing out of the Indo-Islamic architectural heritage. A series of geometrically structured courtyards and loggias are the primary organizing framework. The variation of open, closed and transitional spaces provides light and shade, and creates an inviting environment for work, interaction and repose." 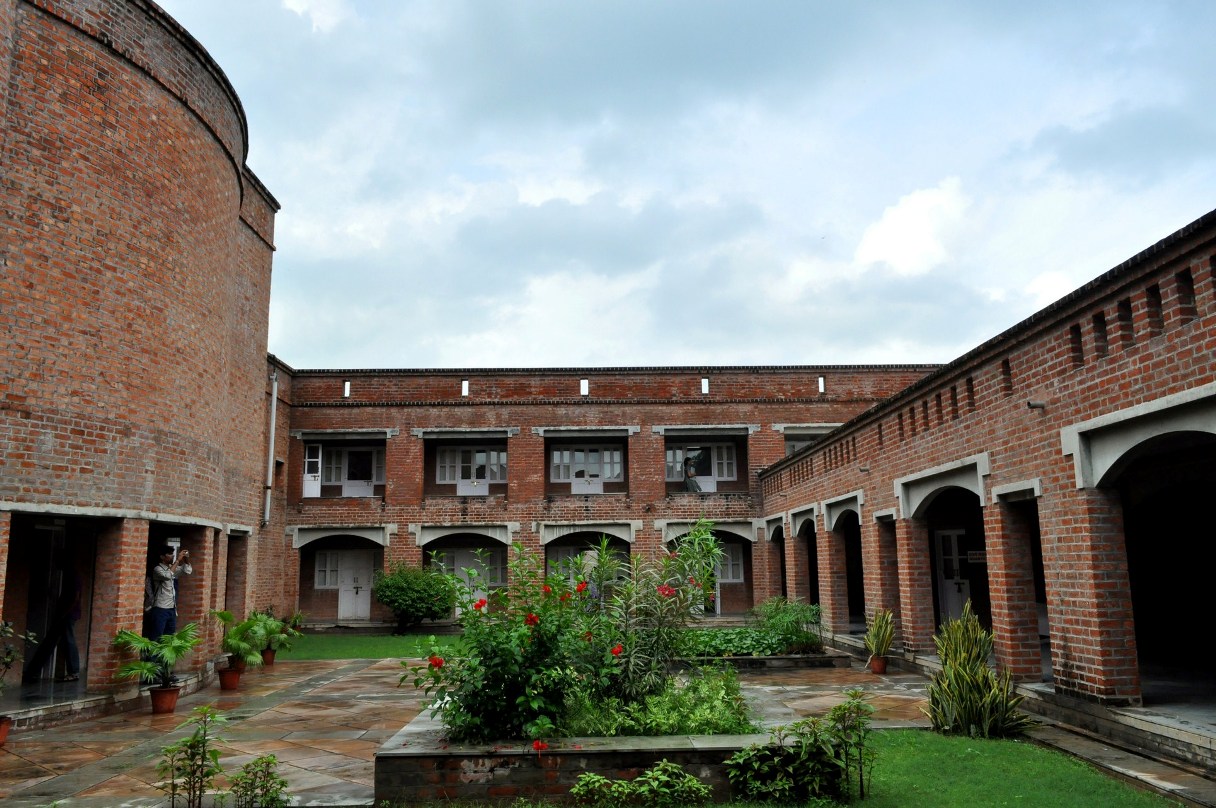 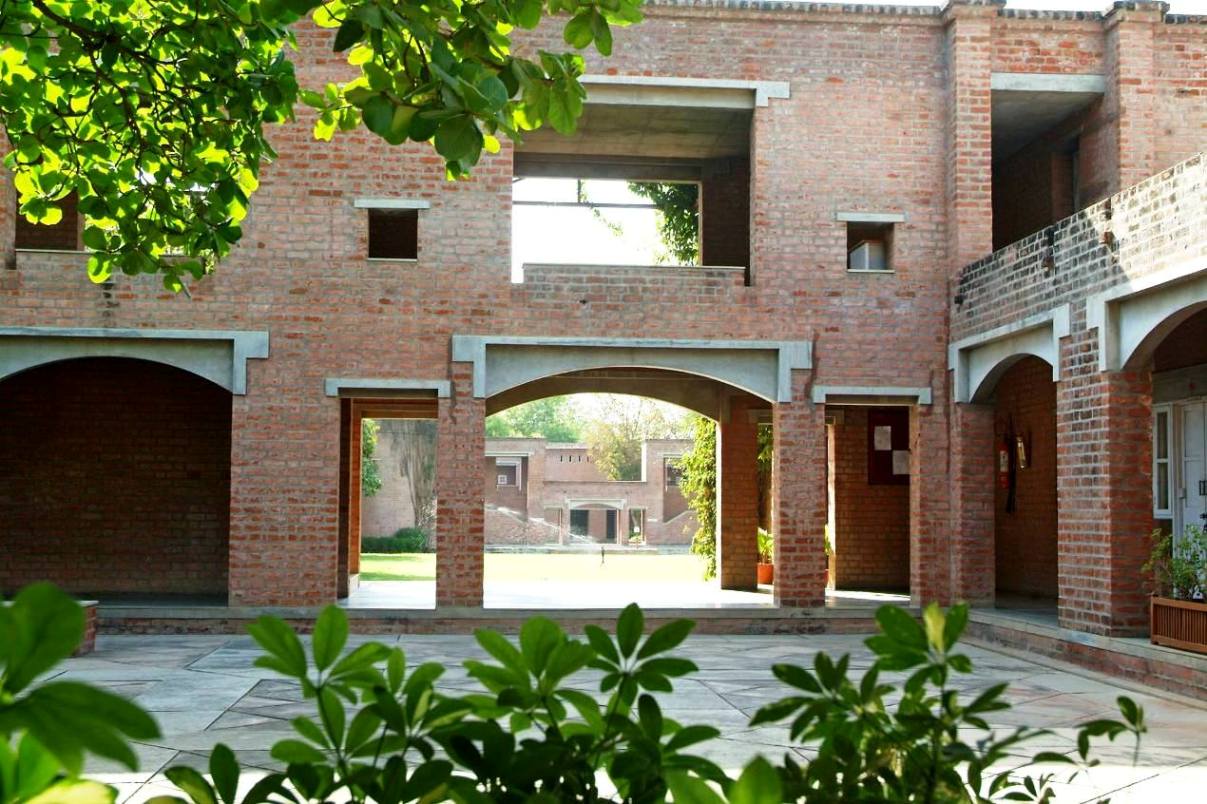 The design of this horizontally spreading campus with an introverted environment is based on the concept of segregation of various functions, courtyard planning and the use of spacious verandahs and corridors. Besides the internal courtyards in the individual building blocks, the outside spaces between the blocks are so organized as to set the buildings with a foreground which in the third dimension merges into infinite space.

The main circulation spine stretching from the entrance pavilion to the library interlinks the various departments. It is so articulated as to provide a varying visual experience, enriched by the three-dimensional treatment and the series of inside and outside spaces. To introduce new facilities, the spine can be extended and new departments attached. 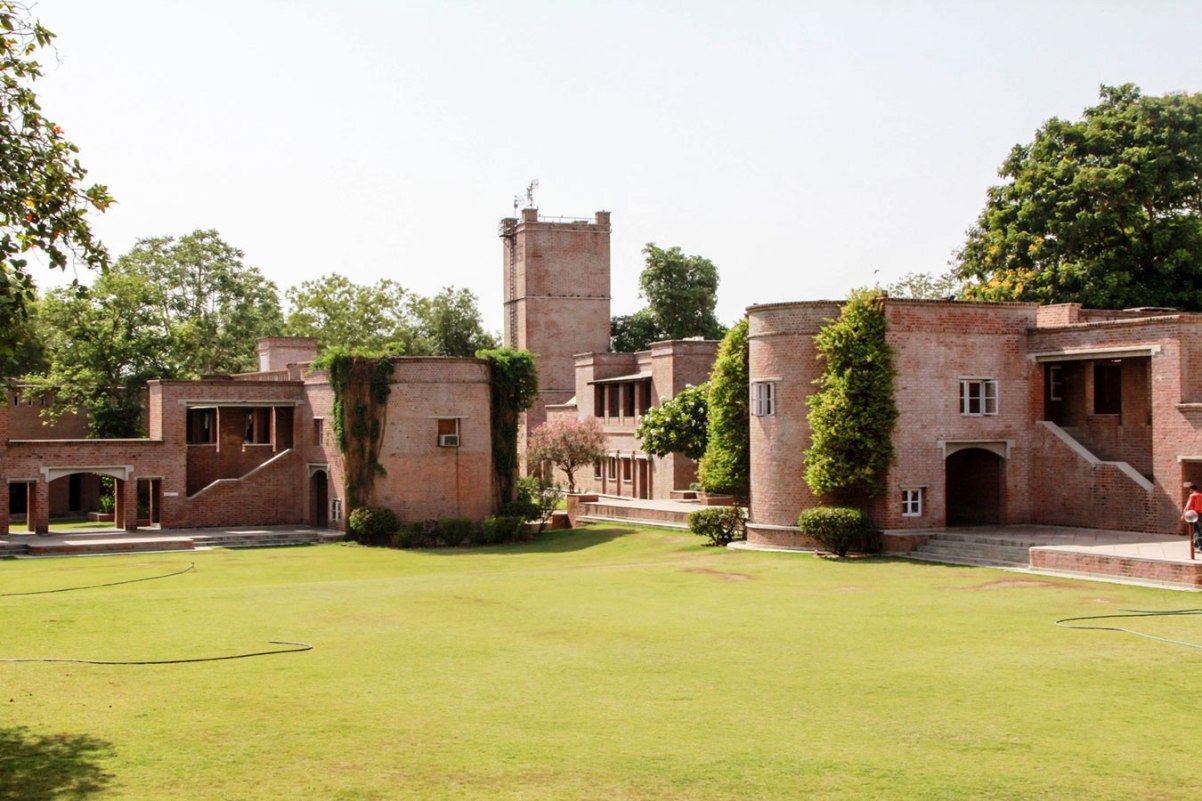 The academic buildings are placed on a higher level of the site to bring them into prominence. The main court, defined by a canteen and the auditorium, serves as an informal meeting place for the faculty and students. The computer centre is located centrally on the first floor of the training centre to make it easily accessible from all departments. The library is conceived as the fastest expanding facility and designed in a way that the existing service and control areas become centrally located once the building is extended. 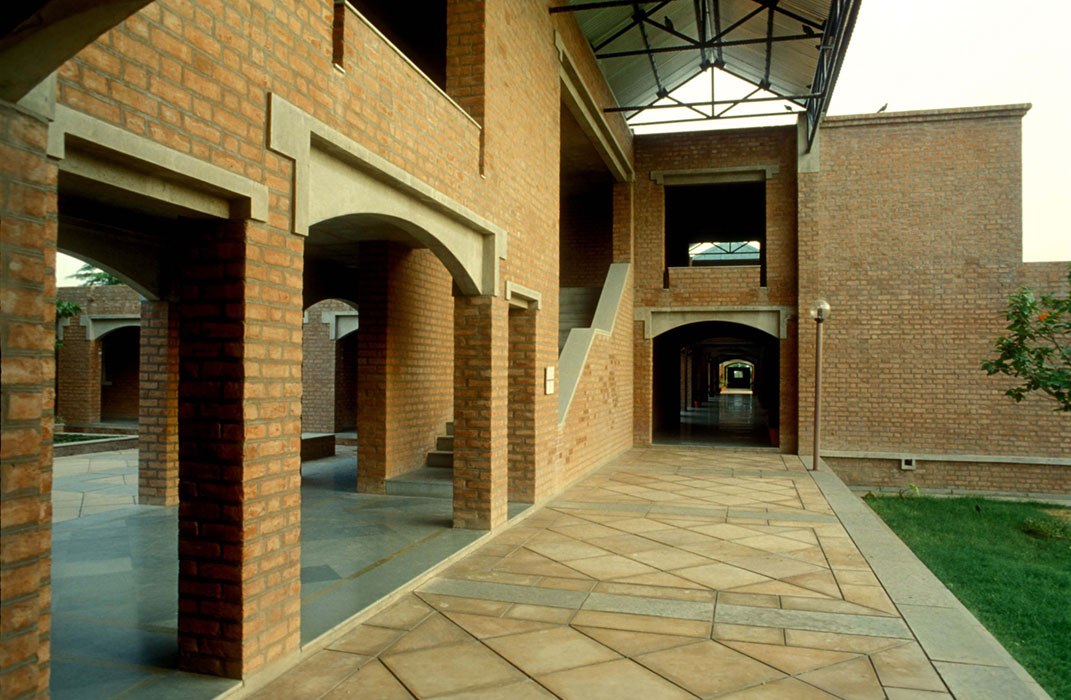 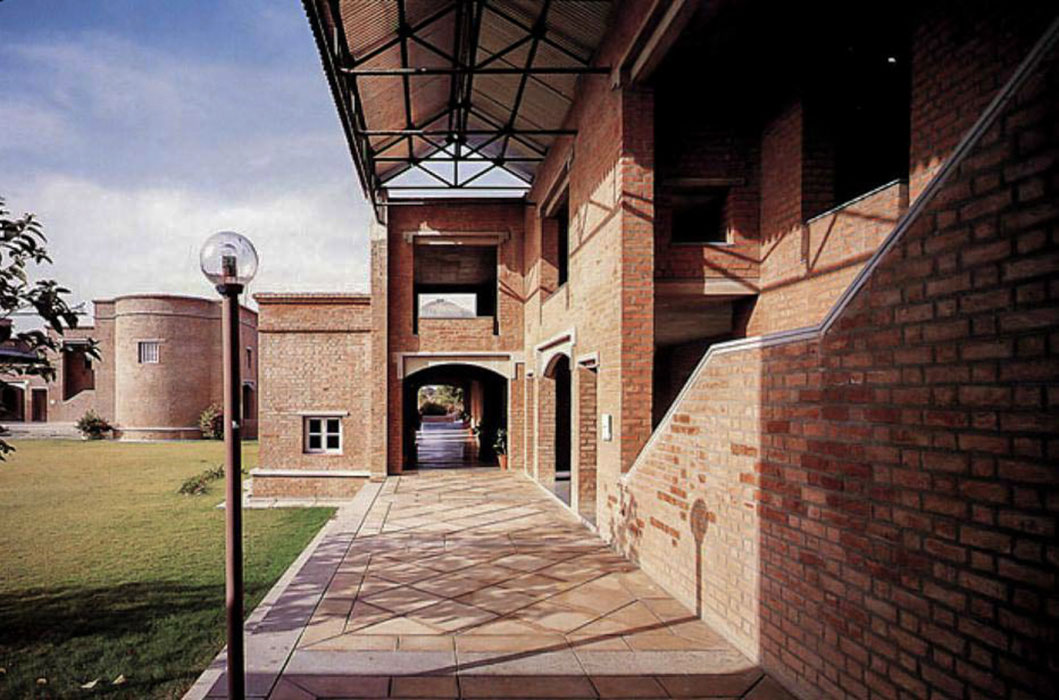 Each individual working space in all the departments contains two types of spaces -  a general area for meeting people and a more private alcove or storage area for books and documents. Since the students and trainees reside on the campus only for short periods, the hostel blocks are kept in close proximity to institutional activities. The hostels are accessible primarily from the entrance pavilion and are also organized around the landscaped courts. 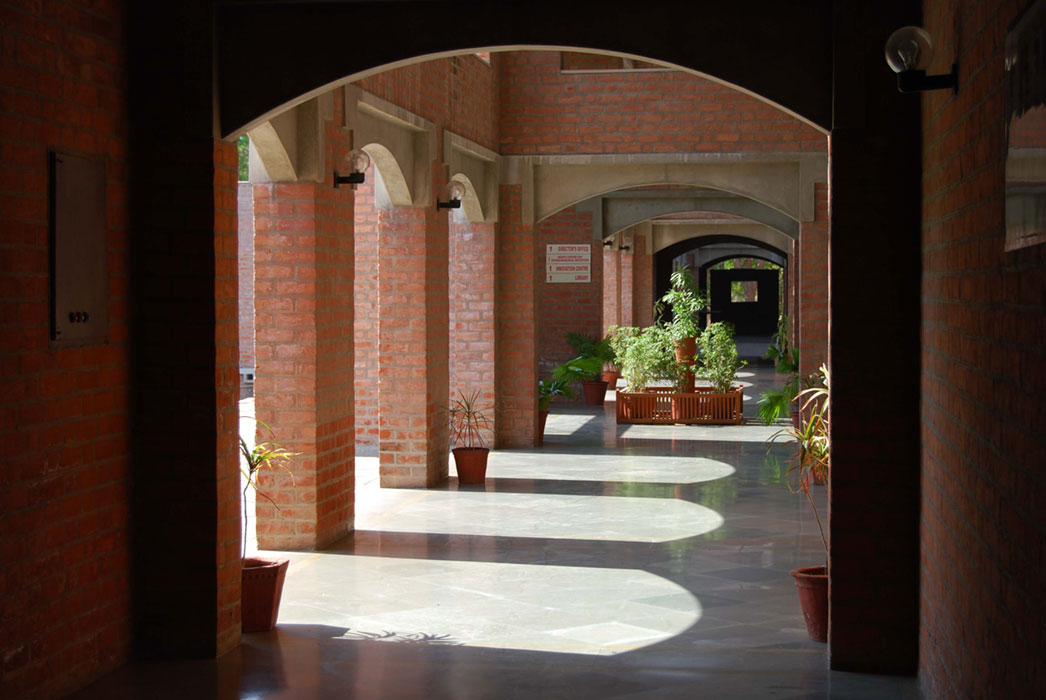 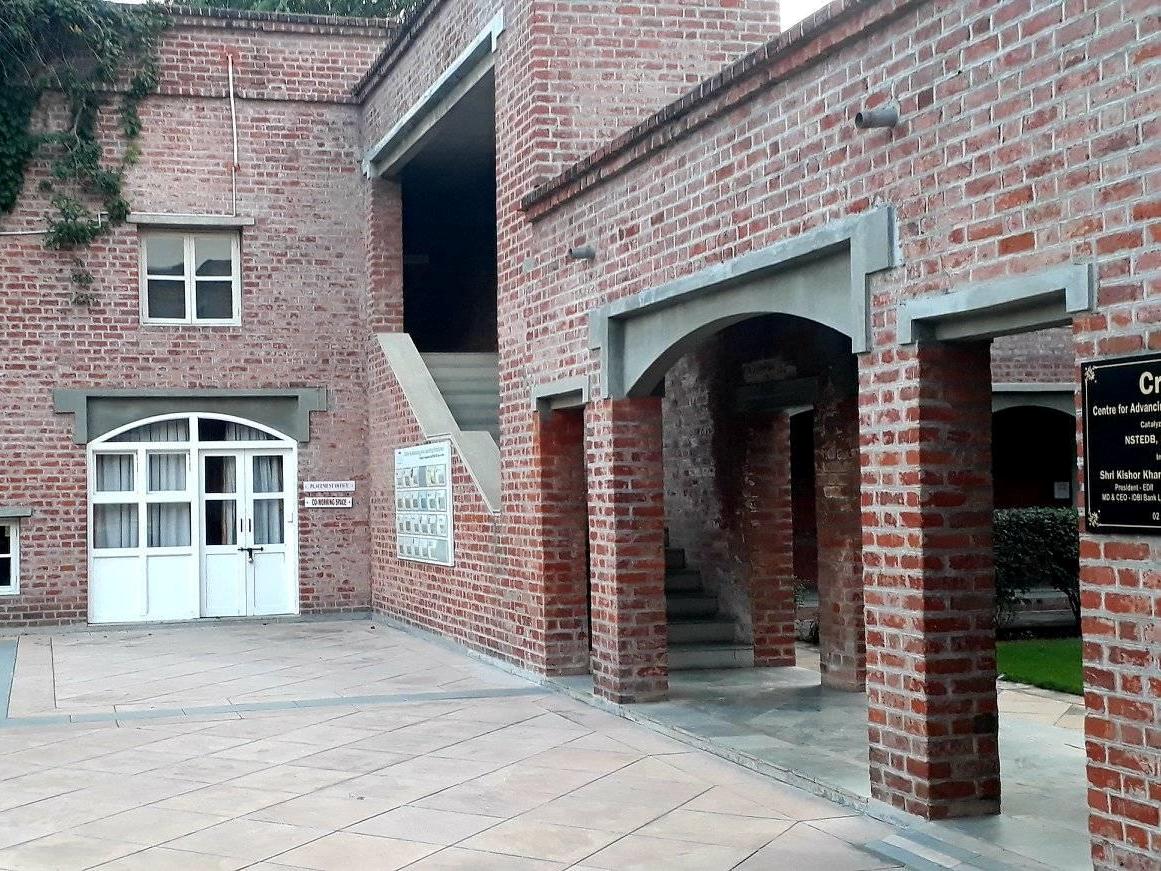 The buildings are designed to minimize the consumption of artificial energy. This has been achieved by the repetitive use of open-to-sky courts, verandahs and recessed windows in thick masonry walls, which help in forming barriers to the sun without shutting off natural light.

The reinforced – concrete slabs, insulated by the use of inverted clay pots and china mosaic finish on the terrace, are the other means of reducing heat gain. Externally, the buildings have an exposed brick finish and are further enriched by the introduction of a variety of concrete lintels over the openings. 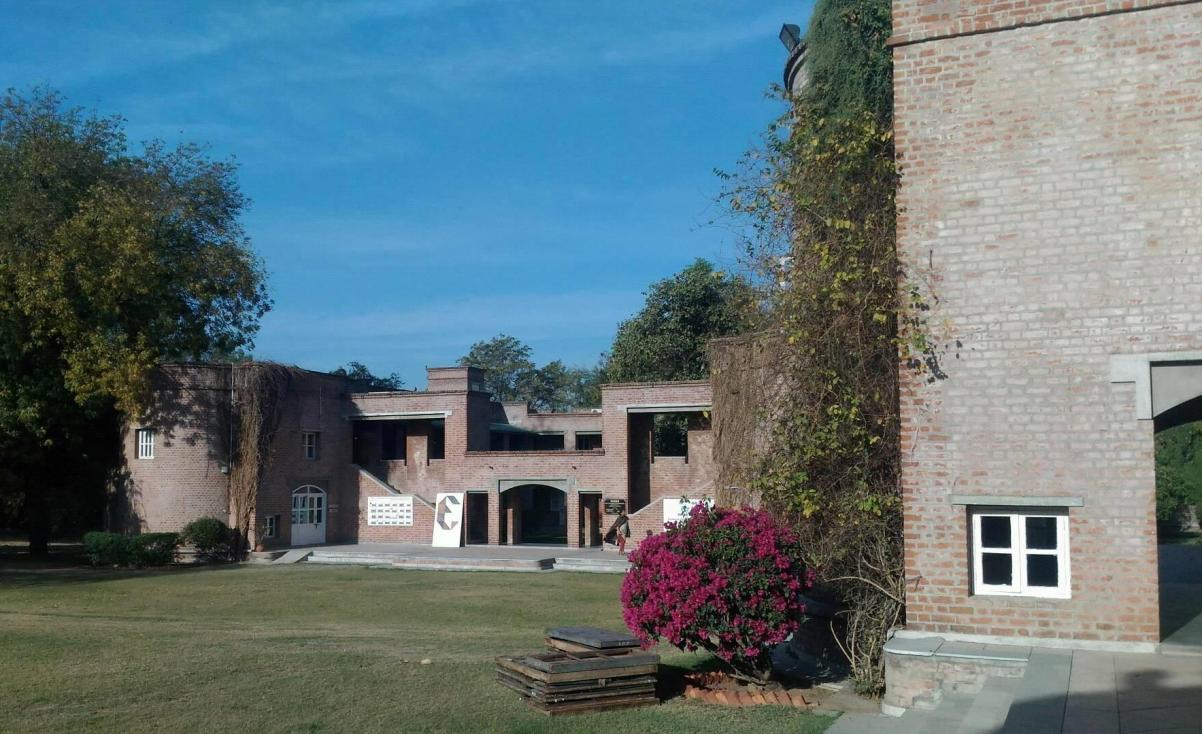 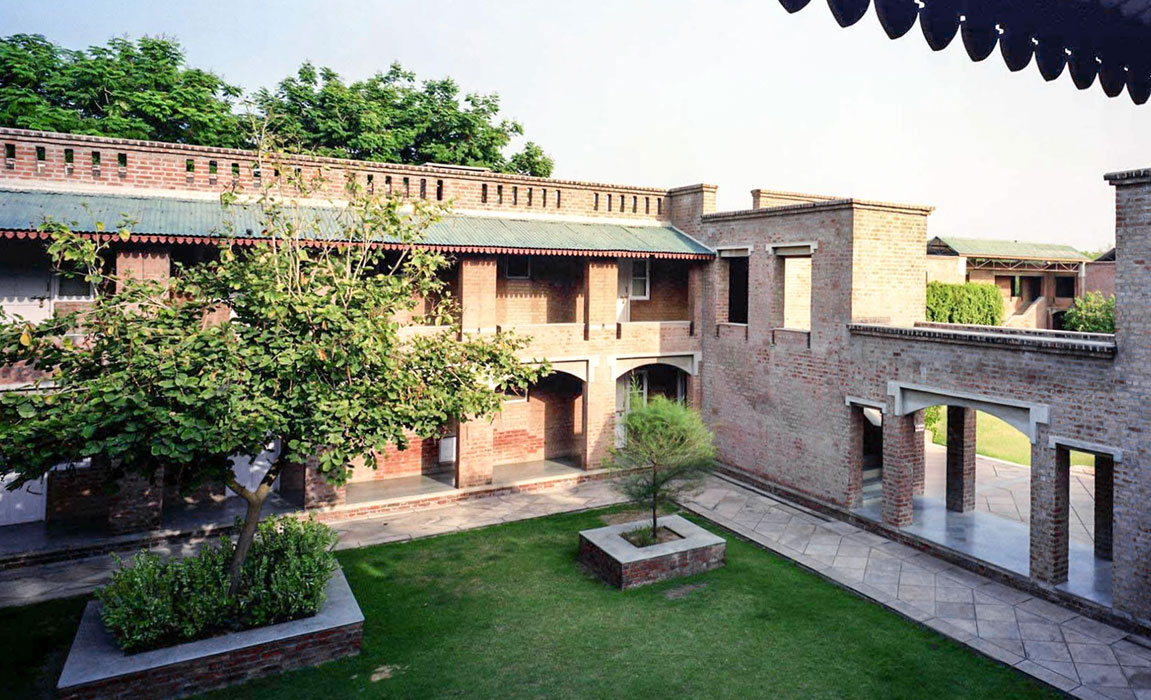 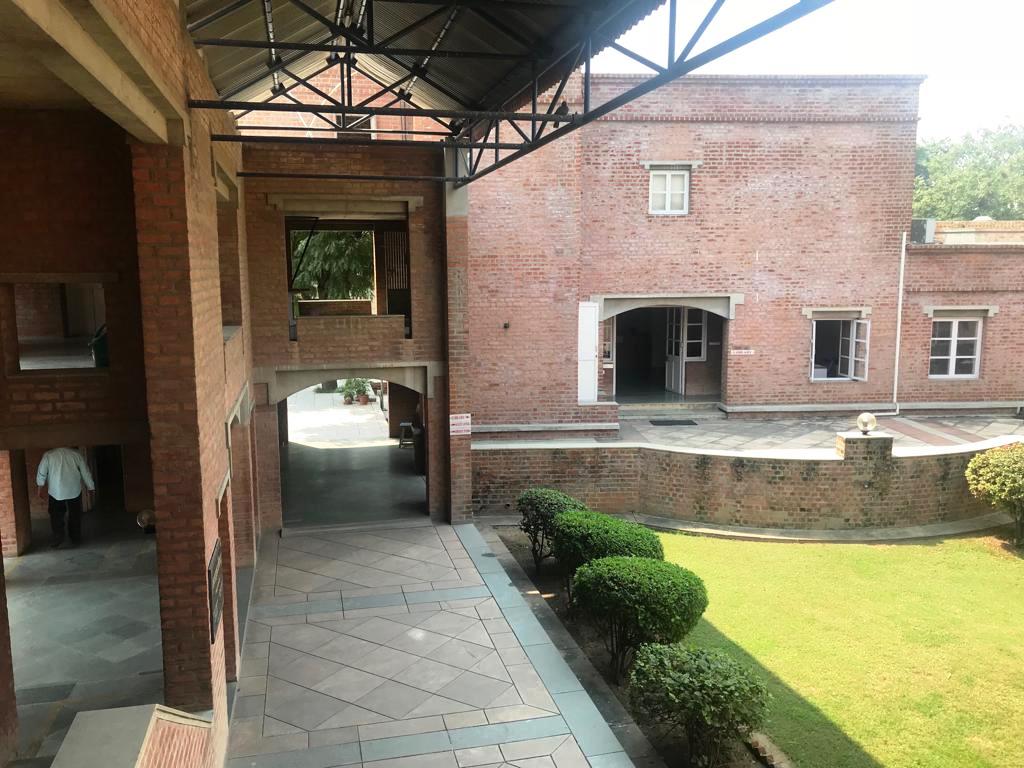 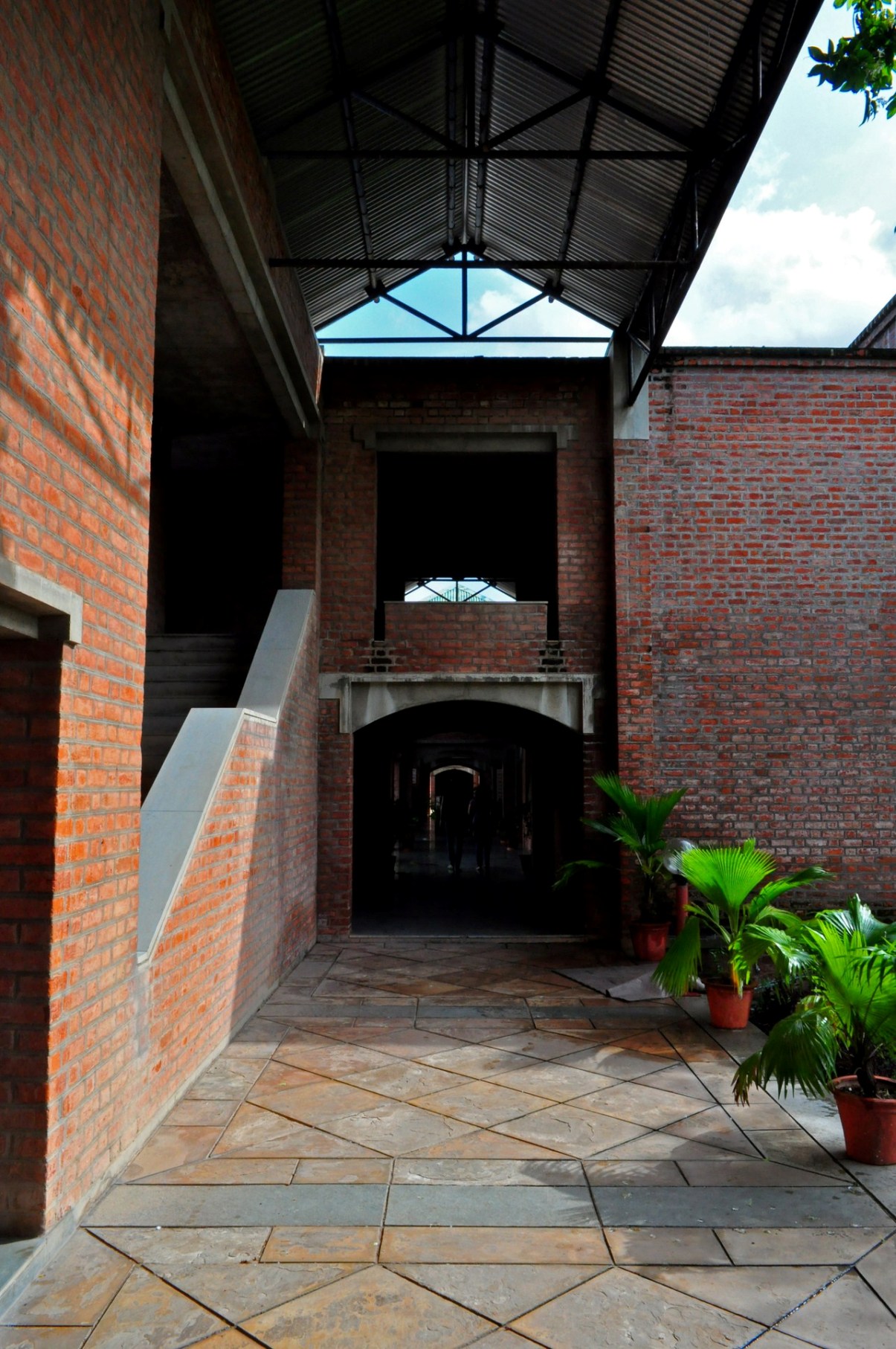 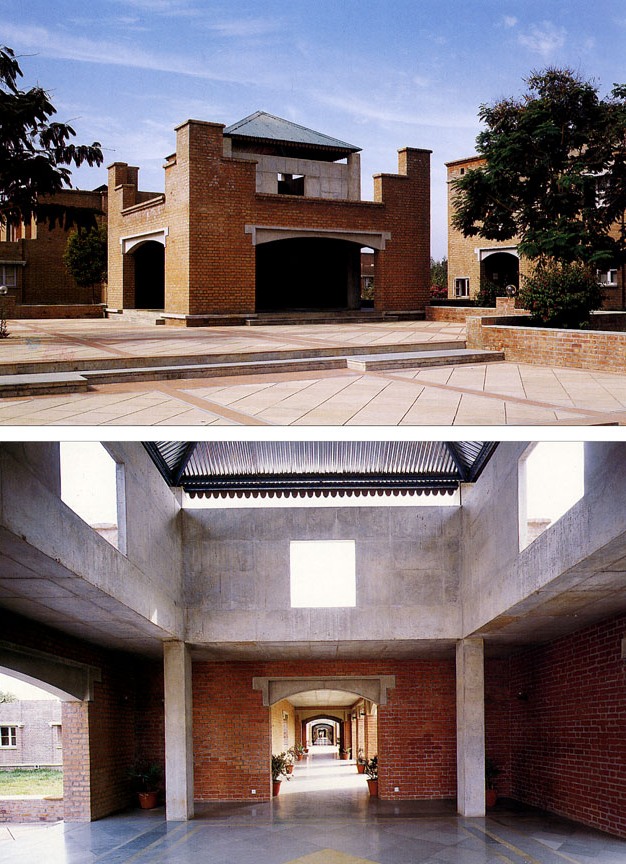 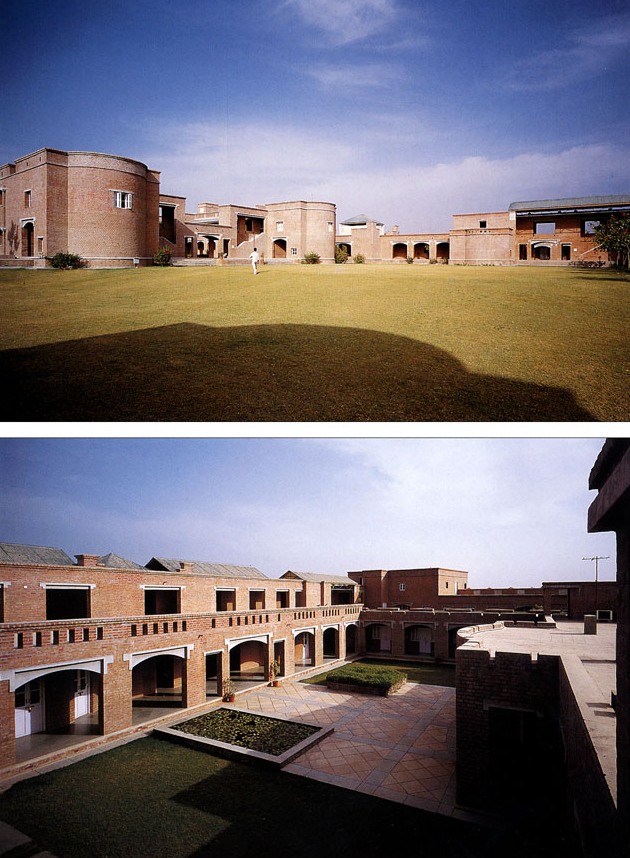 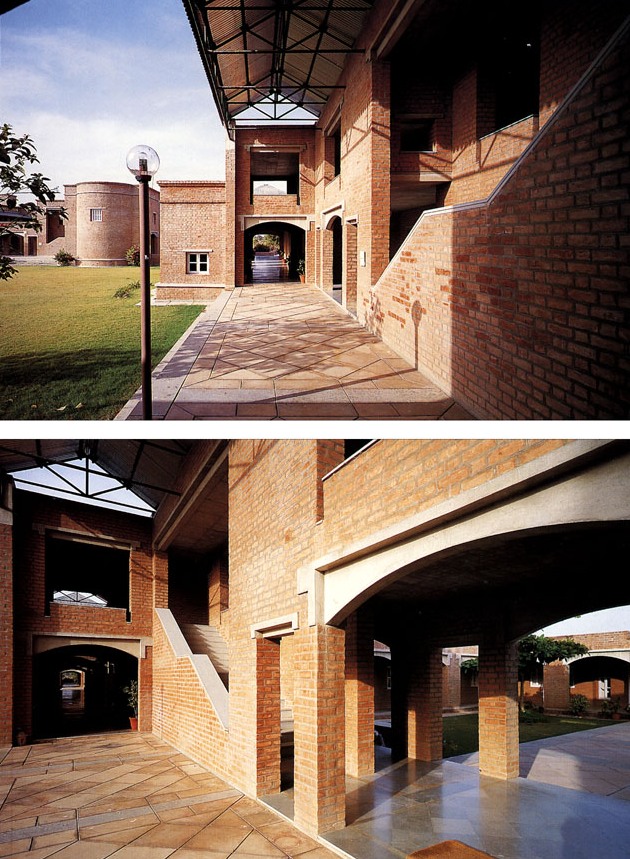 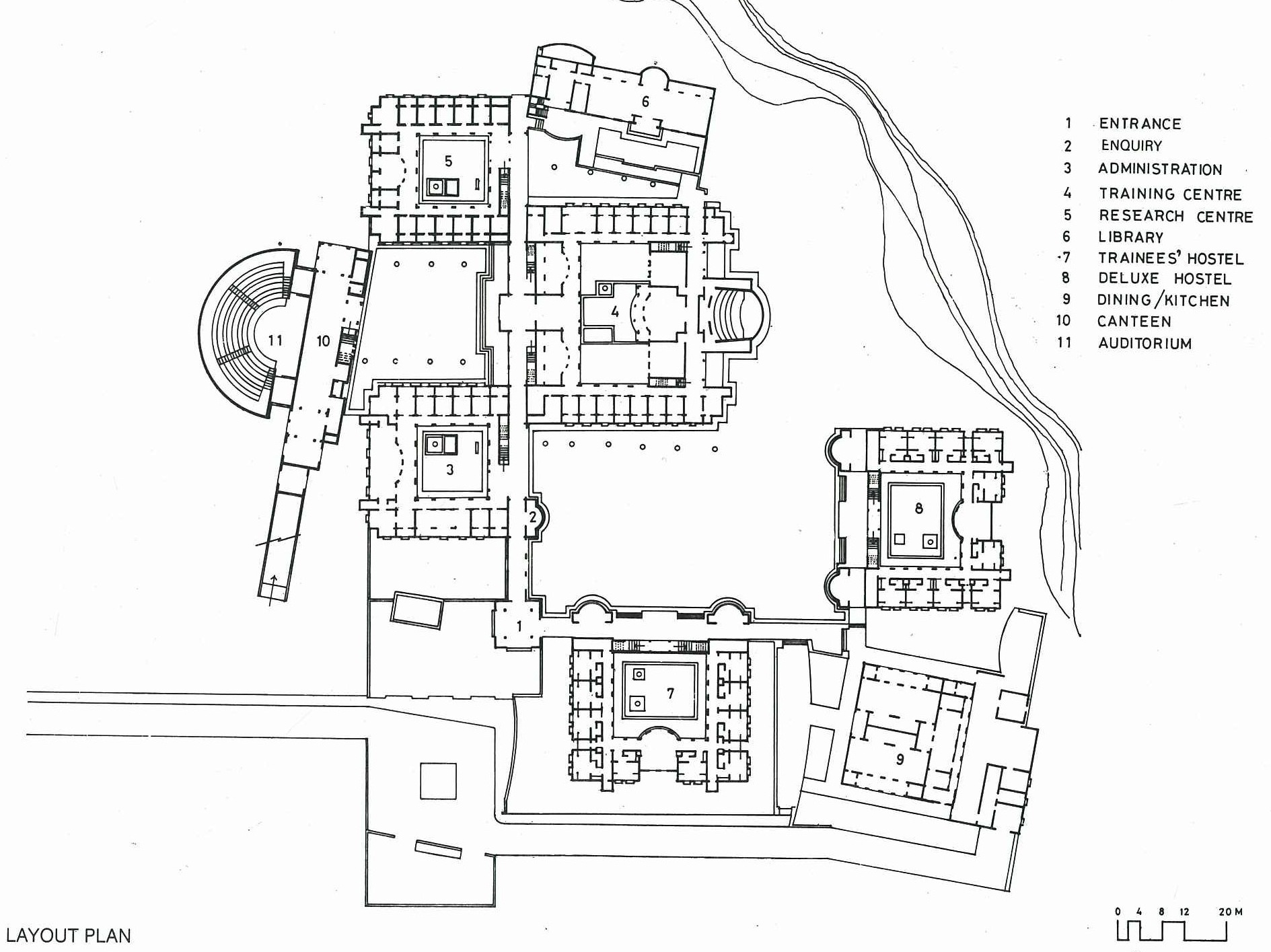 All images courtesy of HCP except where mentioned.