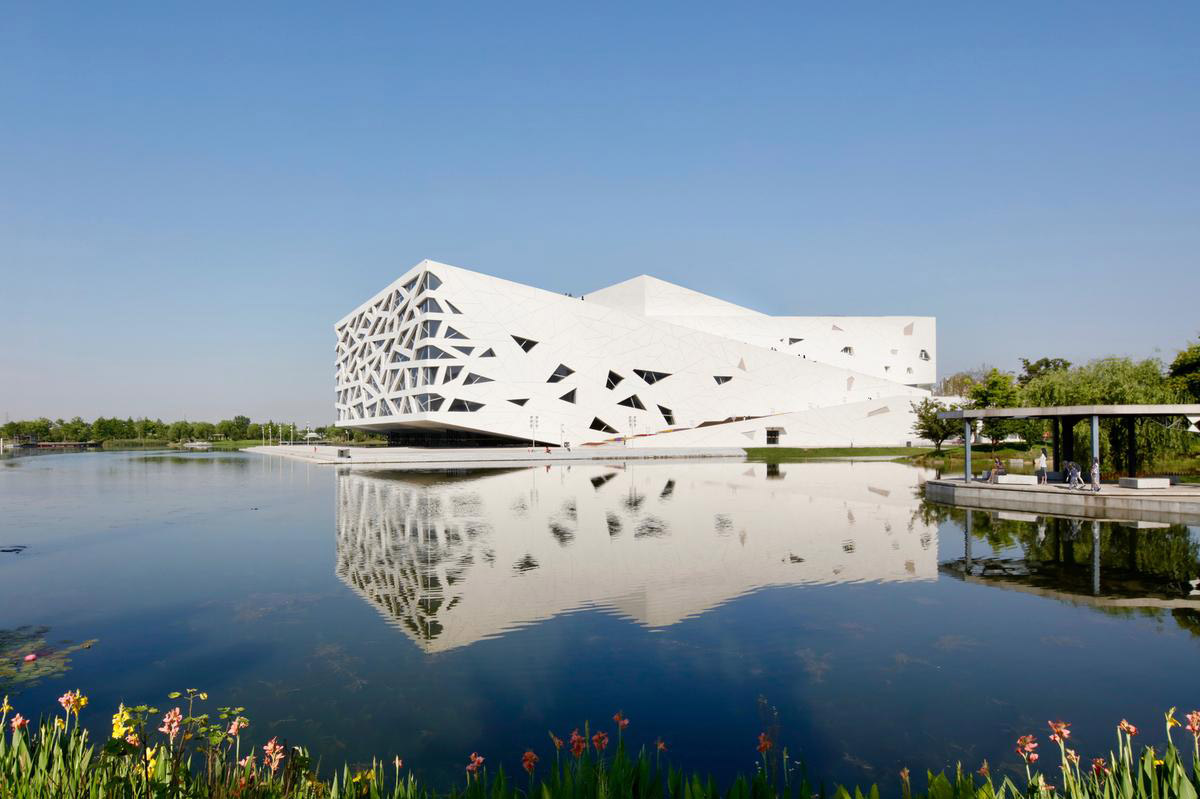 Henning Larsen Architects has completed a new opera house wrapped by all-white-colour and fragmented skin on the waterfront of Yuhang, China.

The opera house is wrapped by Beilida– UHPC Panels in which they are partly cracked on the front façade, taking references from ice cracking on the frozen lake.

The new Opera House, named Hangzhou Yuhang Opera, places arts at center of new cultural crossroads at the heart of a new cultural node in Yuhang, a fast-growing district in the metropolis of Hangzhou. 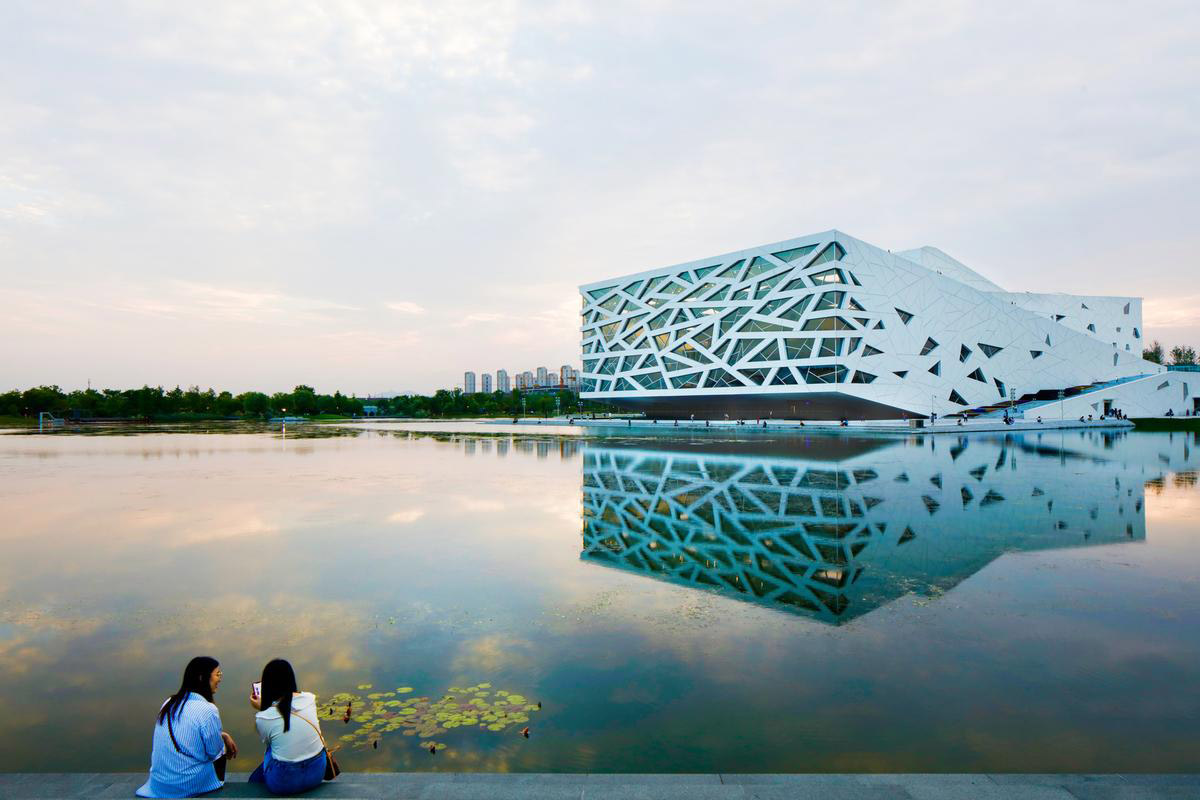 The 70,000-square-metre performance venue comprises two main performance/event spaces: the Main Hall, which can seat up to 1400, and the 500-seat Black Box theatre. The ability of the halls to host a variety of events was a core focus in the design, driving the ambitious acoustic and stage design inside the halls.

The new Opera House offers a state of the art space for performance and events amidst an idyllic park, connecting to an ancient cultural legacy. The building is nestled between the bustling city of Hangzhou and the calm shores of East Lake, the Hangzhou Yuhang Opera cuts a distinctive profile in the skyline, its landscaped peaks appearing to dip beneath the water’s glassy surface. 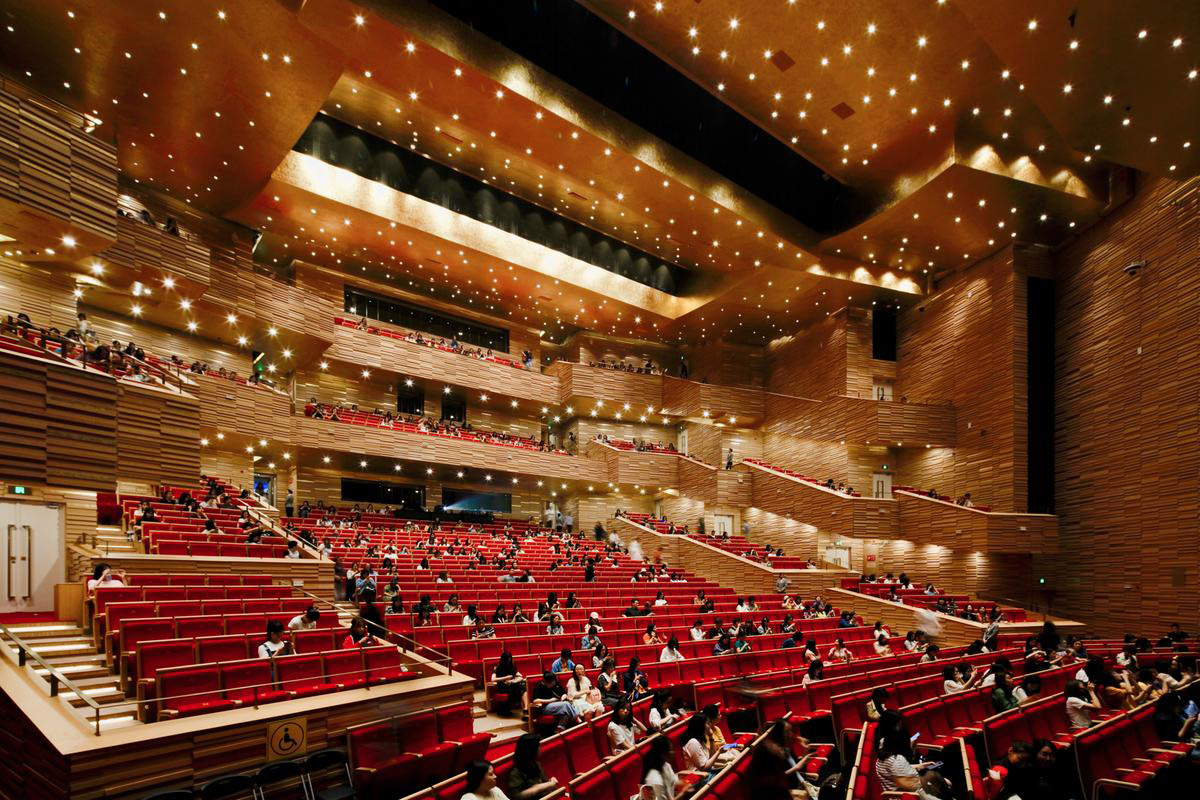 Henning Larsen Architects worked with Hangzhou Architectural & Civil Engineering Design Institute Co., Buro Happold Engineering, and with Bassinet Turquin Paysage and AECOM for the landscape on the project.  The venue has an unmissable presence on the otherwise uninterrupted waterfront. 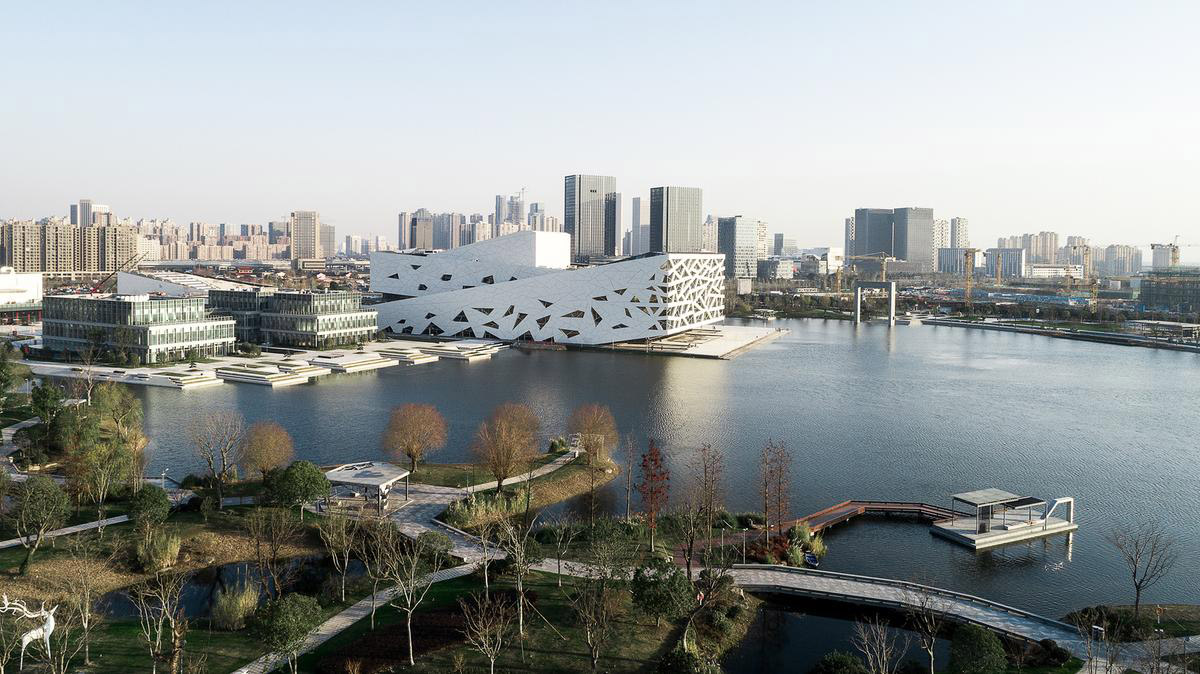 "There is a competition amongst Chinese cities to create new destinations, each with their iconic cultural landmarks," explained Claude Godefroy, Partner and Design Director of Henning Larsen’s Hong Kong office.

"When designing those cultural nodes our most important task is to create truly lively urban centers that can welcome citizens at all times whether they are paying guests or not. That is why we take care to design a diversified and activated public realm around the venues to complete the experience and to complete the city with livable city centers." 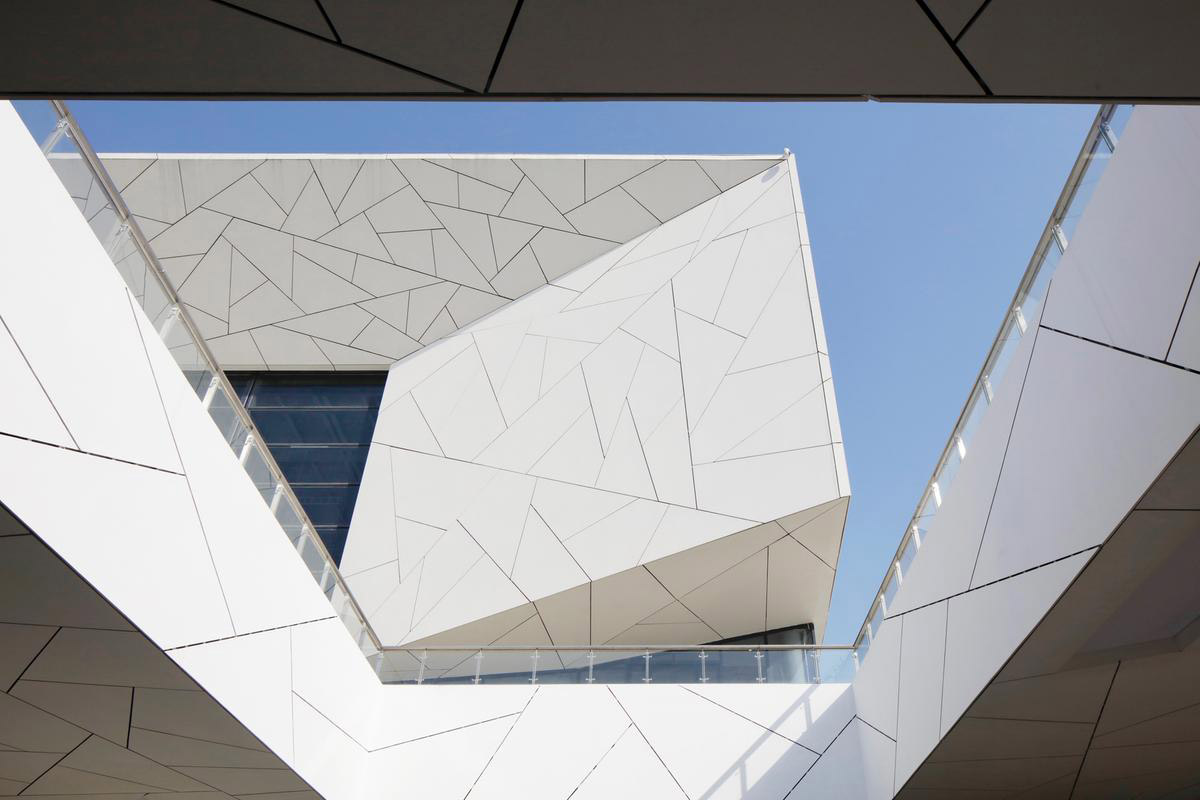 Crucial to the design was East Lake, an expanse of water that lies at the heart of the surrounding park and forms the shimmering, reflective backdrop for the new Opera. While at first glance an established landscape, the lake was in fact part of Henning Larsen’s winning competition design, mirroring Hangzhou’s famed West Lake and creating a geographically contrasting node for culture in the urban region. A meandering promenade circles the lake, passing through small pocket parks (including a traditional Chinese water garden) and commercial facilities. The exterior edge of the park borders a high-speed rail station that has been instrumental in Yuhang’s recent growth and will welcome even more visitors to the new cultural destination.

The opera dominates the lake and the surroundings with a publicly accessible sloping landscape reminiscent in form and scale to ancient manmade landforms that have been discovered in the region.

"People in this region are proud of the 3000 year old mysterious gigantic sloping landforms their ancestors built while laying the foundations of the Chinese civilization. We were inspired by them to use the roofs of the Opera to recreate similarly elevated vantage points above the surrounding lake and landscape," added Godefroy. 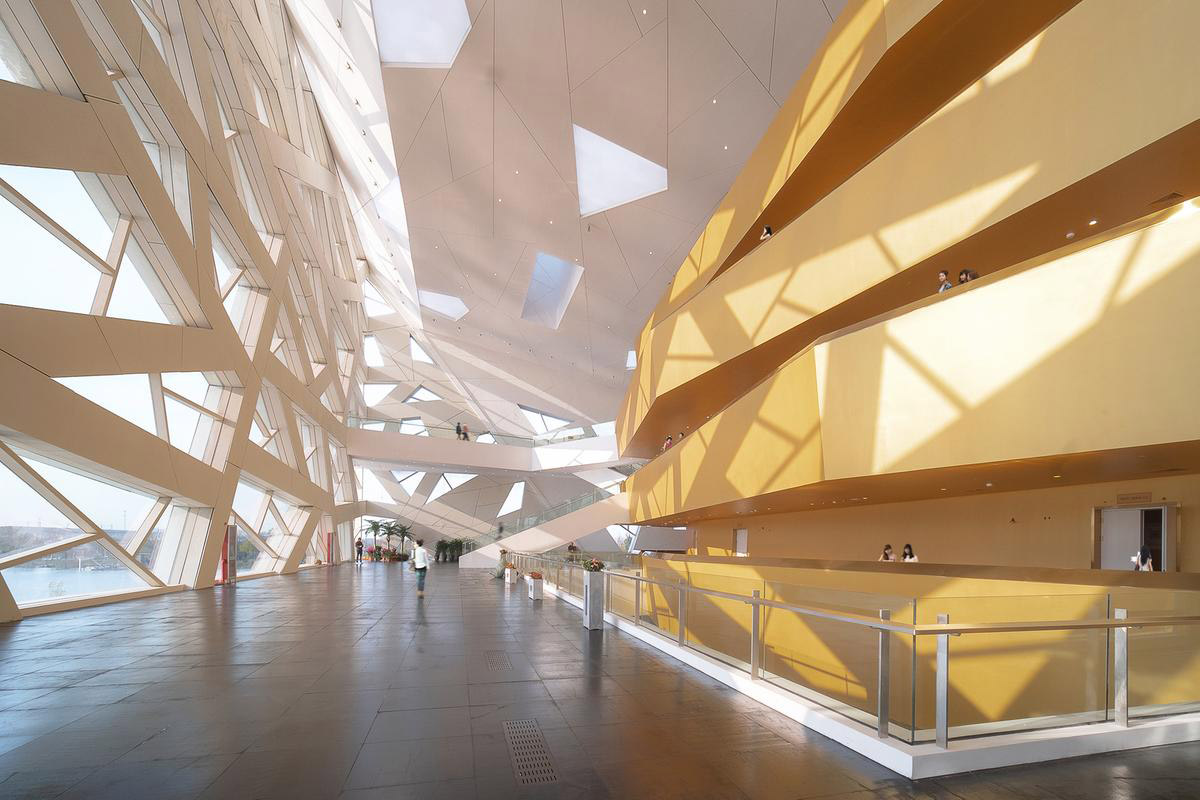 The two sloped and intersecting masses of the Opera perch above an elevated public plaza, the roofs touching lightly on the ground level to invite visitors to climb up and enjoy the view. Both structures are clad in a graphic façade pattern that references ice cracking on the frozen lake; moving from solid back-of-house coverage to near total transparency where it encloses the public foyers – floes of ice drifting away to reveal the bright interior.

The different entrances to the building connect in a path around the auditorium that offers views to the lake and foyer interior. Interior balconies and staircases maximize views out across the site and within the foyer: going to the opera is about seeing and being seen. 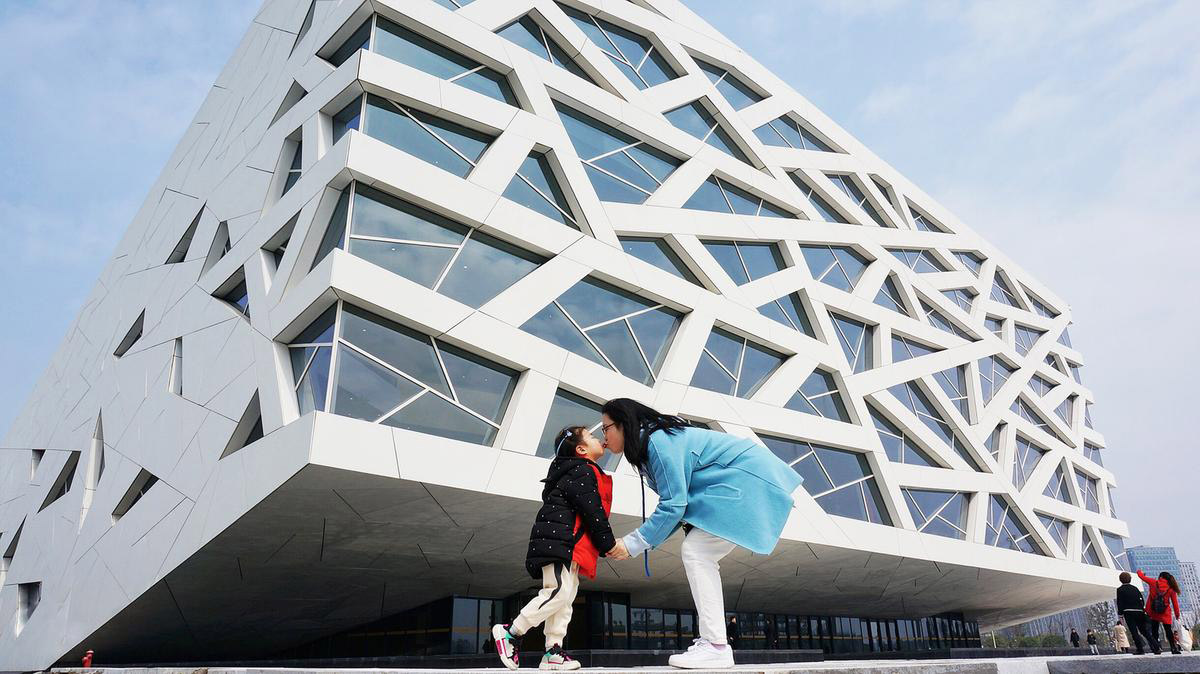 The Black Box theatre has the ability to literally open one full side to the elevated public plaza, becoming a stage for a massive 10.000 people exterior venue. The main hall offers a wide range of purposes from drama to full blown opera performances, from amplified music to philharmonic concerts and fromconferences to Government meetings.

"The capacity of auditoriums to serve multiple purposes is essential to secure lively venues that are utilized throughout the year," continued Godefroy.

"Those auditoriums are complex to design because of seemingly conflicting requirements for the different configurations, but it is possible and the increase in cost is marginal compared with the cost of single purpose venues." 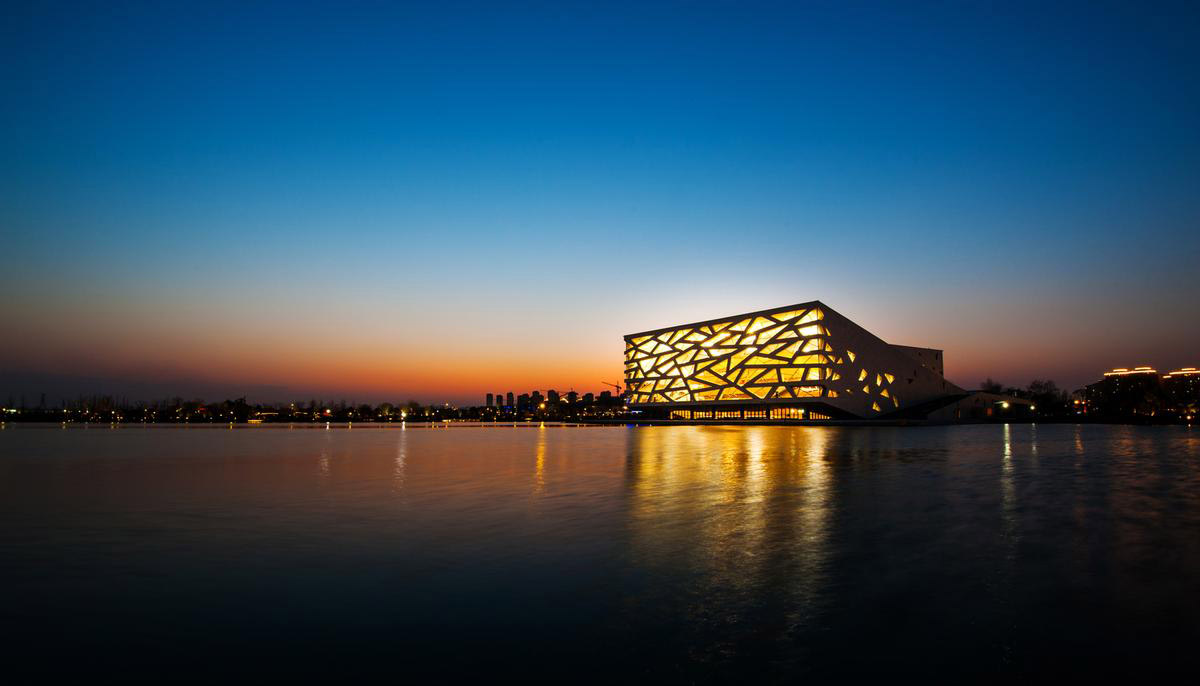 "Since its opening in May, the Opera has already hosted numerous performances and events, including an opening concert on 18 May by the Czech National Philharmonic Orchestra. The Opera and surrounding grounds have already proven to be a spark for regional development, with the surrounding district blossoming to become a new center in the in the 20 million person city of Hangzhou," said Henning Larsen Architects.

Henning Larsen is globally known for its expertise in operas and concert halls, in 2018 it was announced that the office would lead the expansion of Paris’ famed Opera Bastille. In Asia, the office is also completing the Shaw Auditorium at the Hong Kong University of Science and Technology and the Foshan Opera.