Izaskun Chinchilla created an auditorium that consists of many layers of fabric, texture and colors Madrid-based architecture practice Izaskun Chinchilla has created a vivid and colourful auditorium for this year's edition of Casa Decor in Madrid, Spain. The interior space presents a unique environment and different atmosphere that overlap different layers of textile, fabric and colours in an harmonised way.

Titled Auditorio Fortuny, the interior space is located in a building that has a strong 19th Century typology - which also follows the traces of the first years of 20th Century. The building's location gives the design a unique charm. The building, located on the Jerónimos Quarter, is surrounded by the Prado Museum, the Stock Exchange, the Communications Palace, the Botanical Garden, the Jerónimos Church, the Museum of Anthropology , the National Astronomical Observatory, Buen Retiro Park, Navy Headquarters, Cason del Buen Retiro, the Royal Academy of Language, the Monument to the Fallen by Spain and The Ritz Hotel. 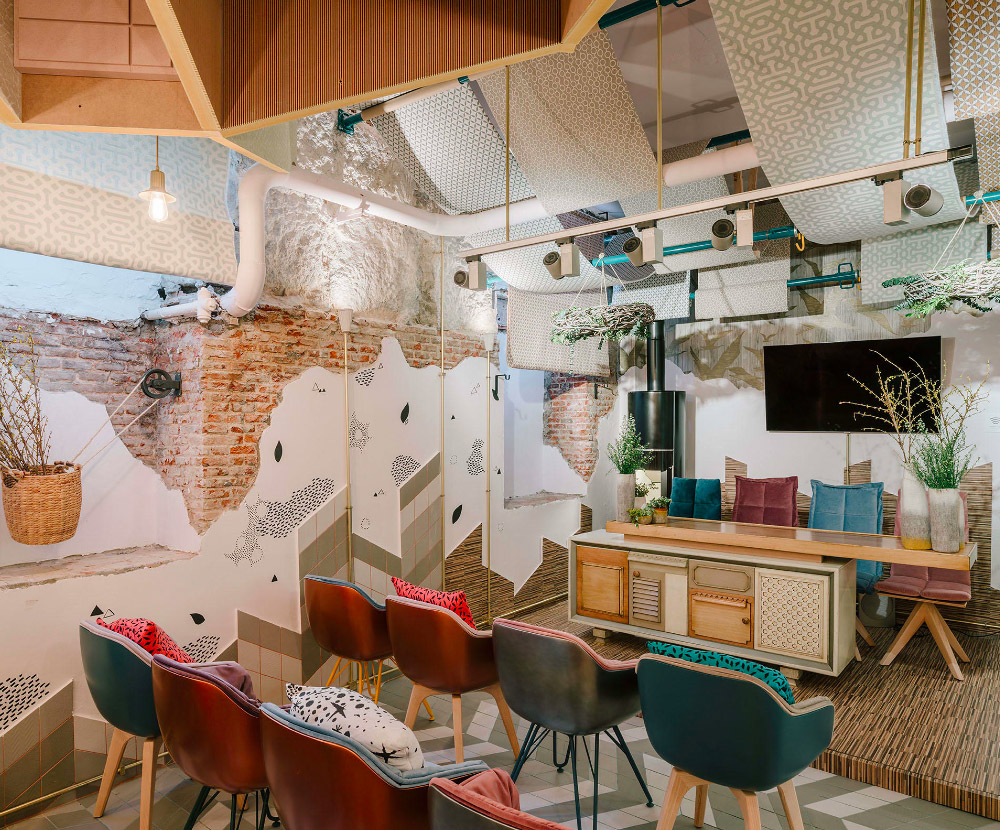 The interior space adopts design elements as the inspiration some of those that were proper in the last decades of 19th Century, when they were constructed and the streets and the majority of the buildings of the neighborhood.

Izaskun Chinchilla also tries to celebrate and pay homage to the presence of the most illustrious of its neighbors: the Prado Museum. Inspired by the paintings of Mariano Fortuny, one of the great authors of the 19th Century that the museum houses, the architects selected proper materials and application methods according to the concept of the space. In particular, they were inspired by a series of pictures dedicated to represent the Alhambra. 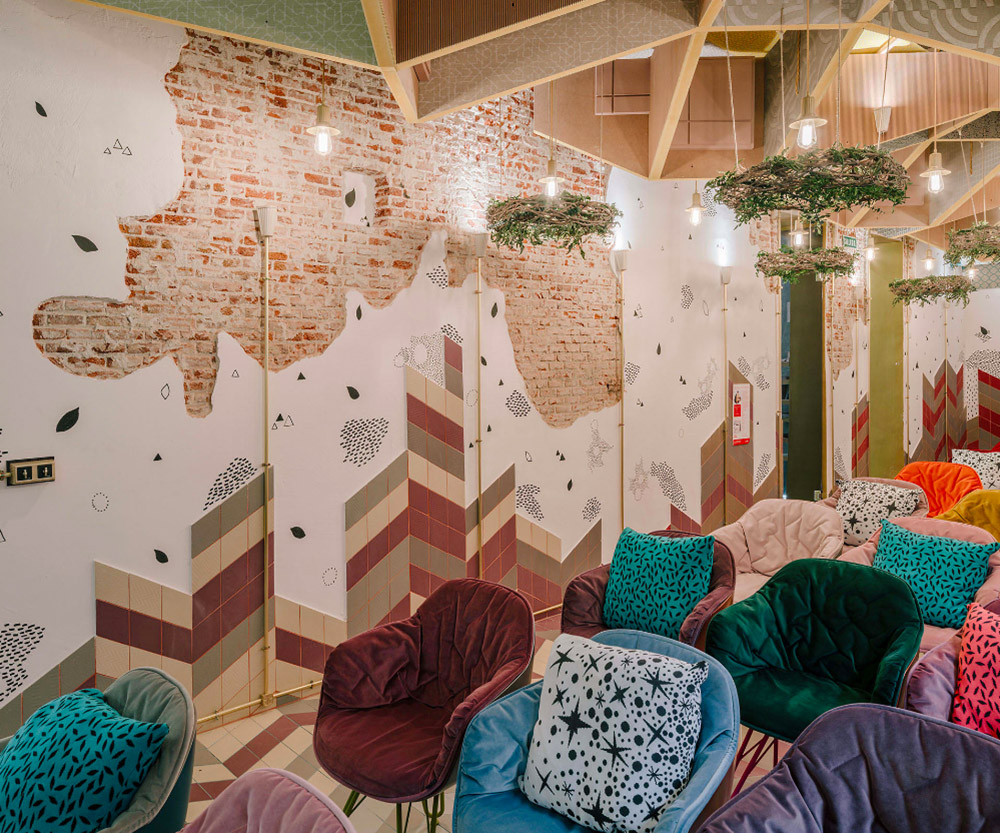 "These paintings embody many of the aesthetic preferences of the nineteenth and the romantic repertoire: the taste for ruin, orientalist inspiration, interest in life forms that denoted freedom, cultural consideration of travel. Our space tries to update this aesthetic and cultural repertoire in the old portico of Antonio Maura 8," said the architects.

"The aesthetic fascination for ruinous places, inhabited with provisional means, has today a new sense and a new validity. The work of an architect or contemporary architect in Europe, is fundamentally oriented to the transformation of existing buildings: we already have the infrastructure, but our needs evolve daily," they added. 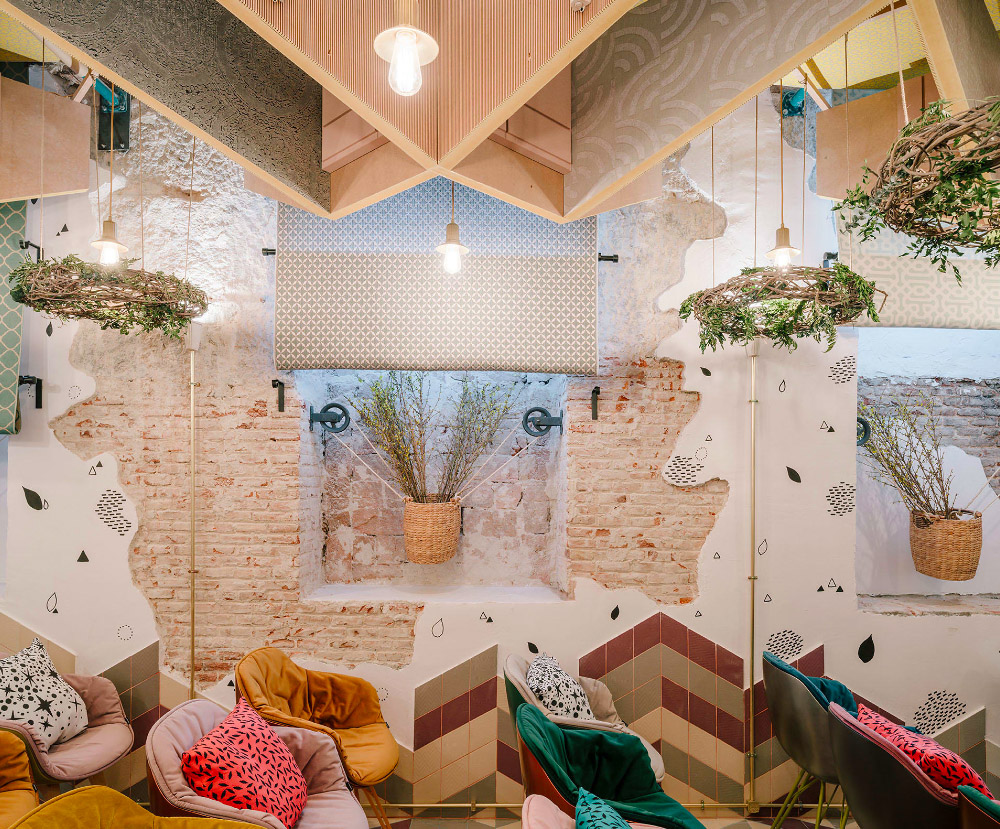 In this transformation, the architects renewed everything in the interior by covering and redoing - in order to create the effect that every element from the interior, or sometimes the exterior are coming from a single time.

"The paintings of Fortuny, help us to discover the beauty of the spaces where the deteriorated coexists with the provisional," explained the architects. 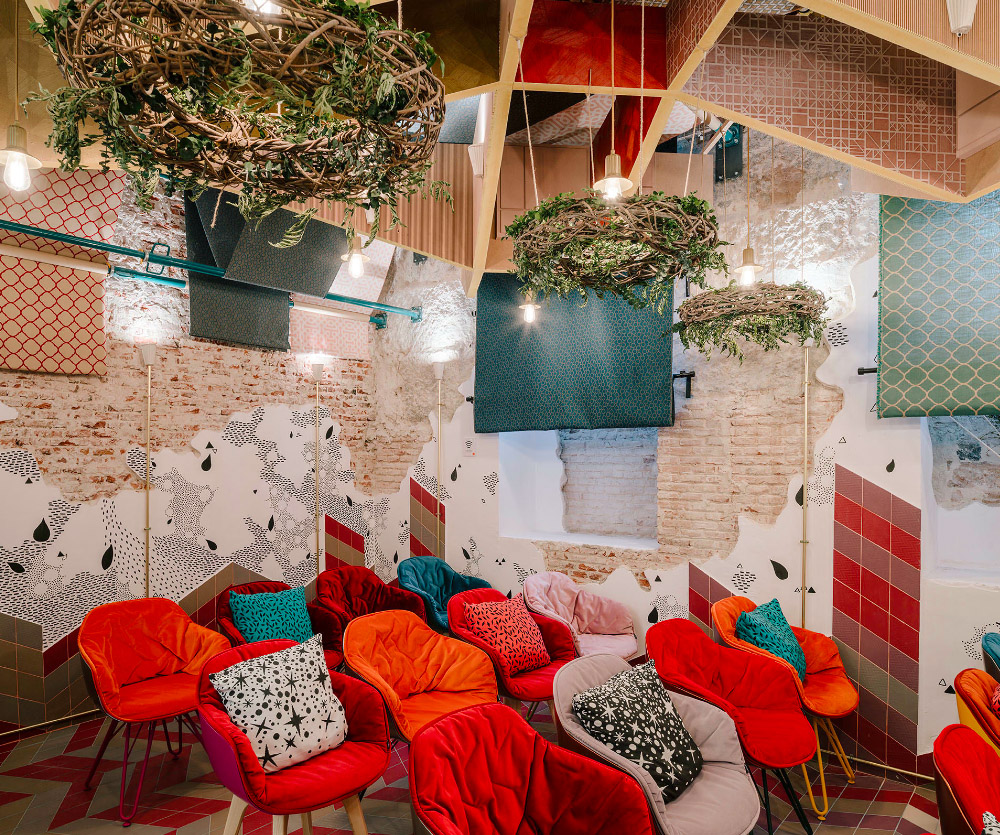 "Where can be heard the stories embedded in historical support and where new needs can be resolved with imagination and with a certain austerity. This is a message of enormous relevance and validity for the current architecture and interior design."

"The deteriorated can, in fact, be solemn, collective and full of memory. The provisional can, in fact, be a sign of our own freedom, of the way in which we can reimagine our way of life every day." 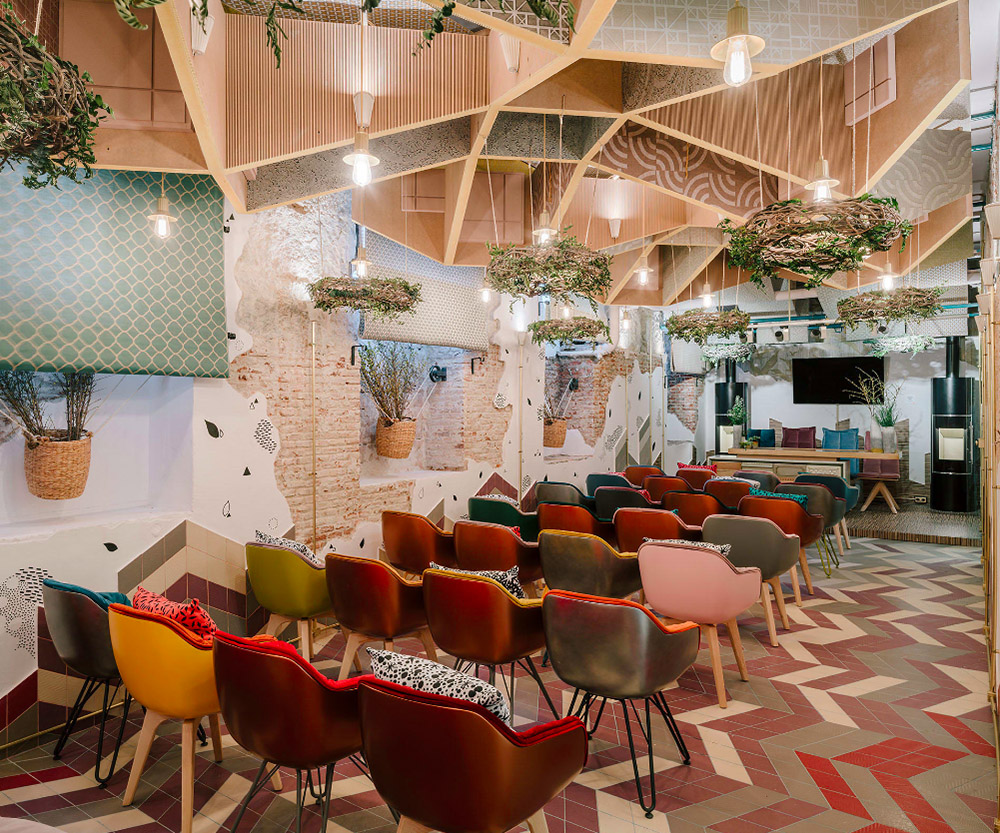 For these reasons, the walls of the interior space expose the layers of materials that the recent plastering partially concealed. This effect creates some sort of naturalness and fluidity in the interior space - the architects repainted the doors and windows to continue to fulfill their function. They used a beautiful tiling that covers all floors meandering slightly on the wall, but the tiling does not cover it completely. 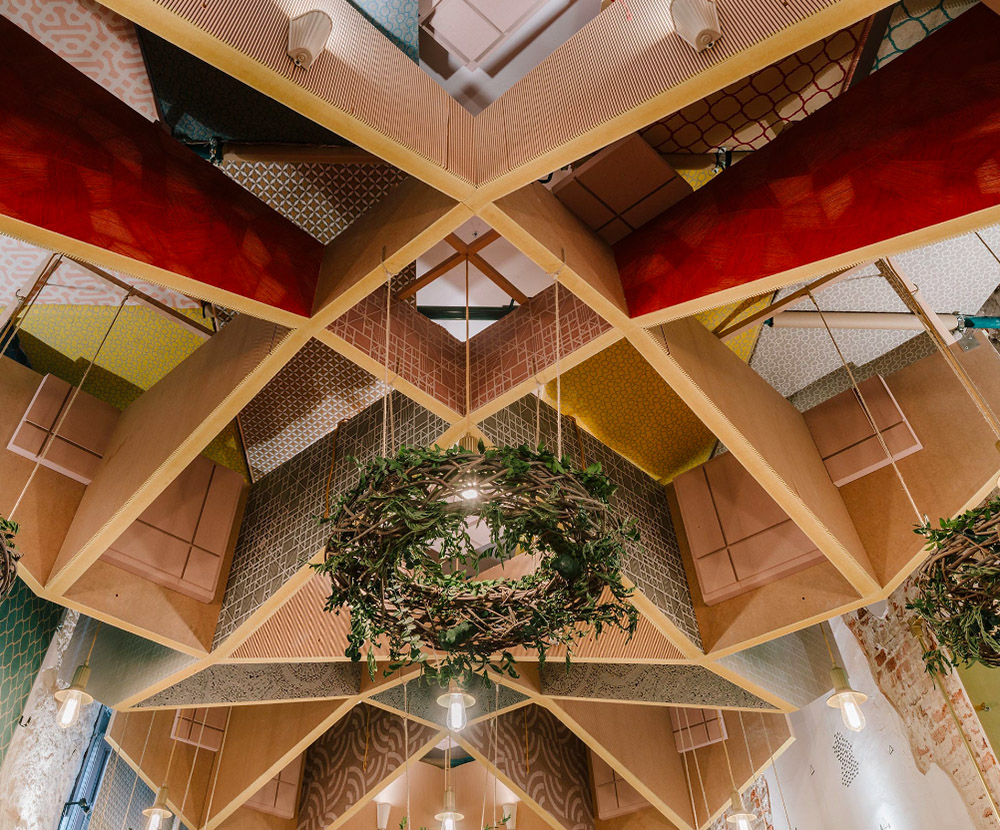 "In our space, as in others that our firm has developed, the reused materials coexist with the new ones. The constructive elements combine different levels of obsolescence," the architects explained. 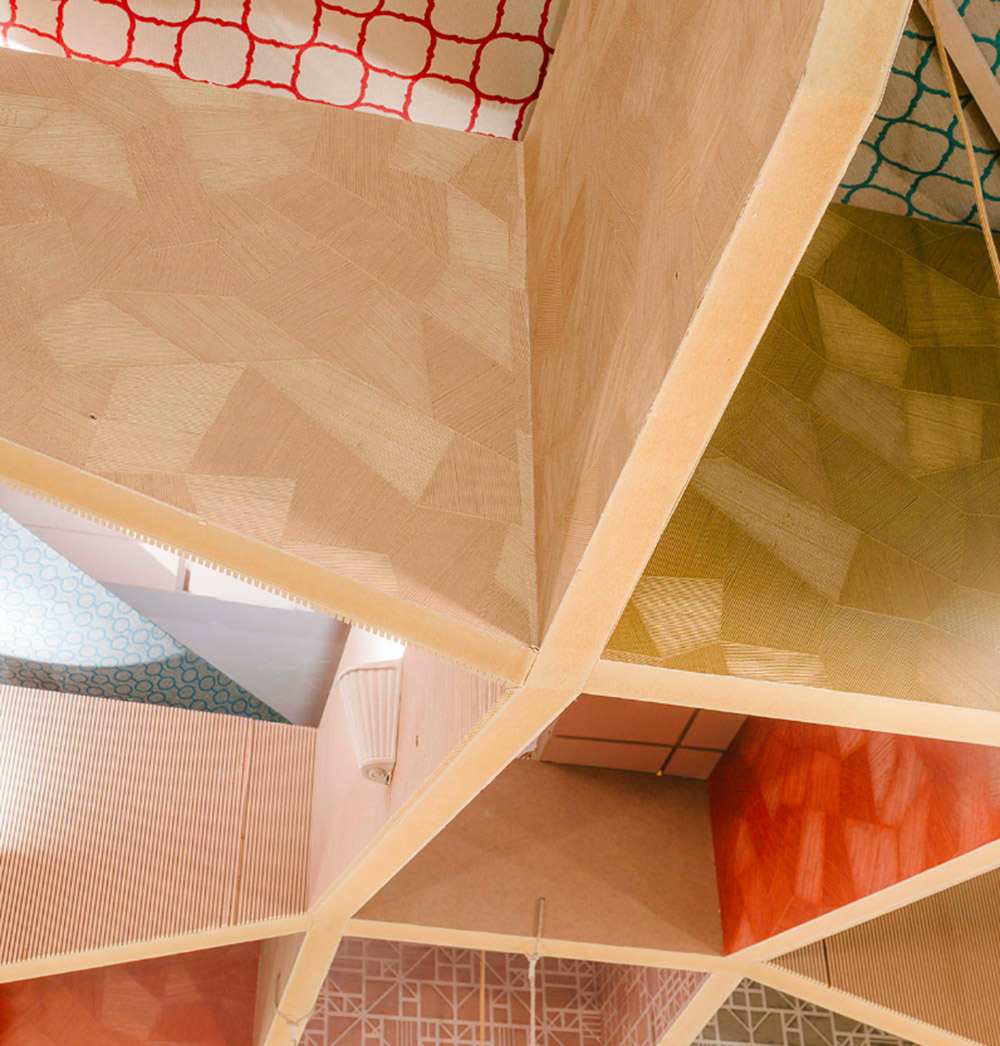 The flowers, the fabrics, the partial plastering, the patches, the furniture and the structural make each one functional and people know that they coincide in a moment of the history of the space but that, later, each one are renewed to its rate. 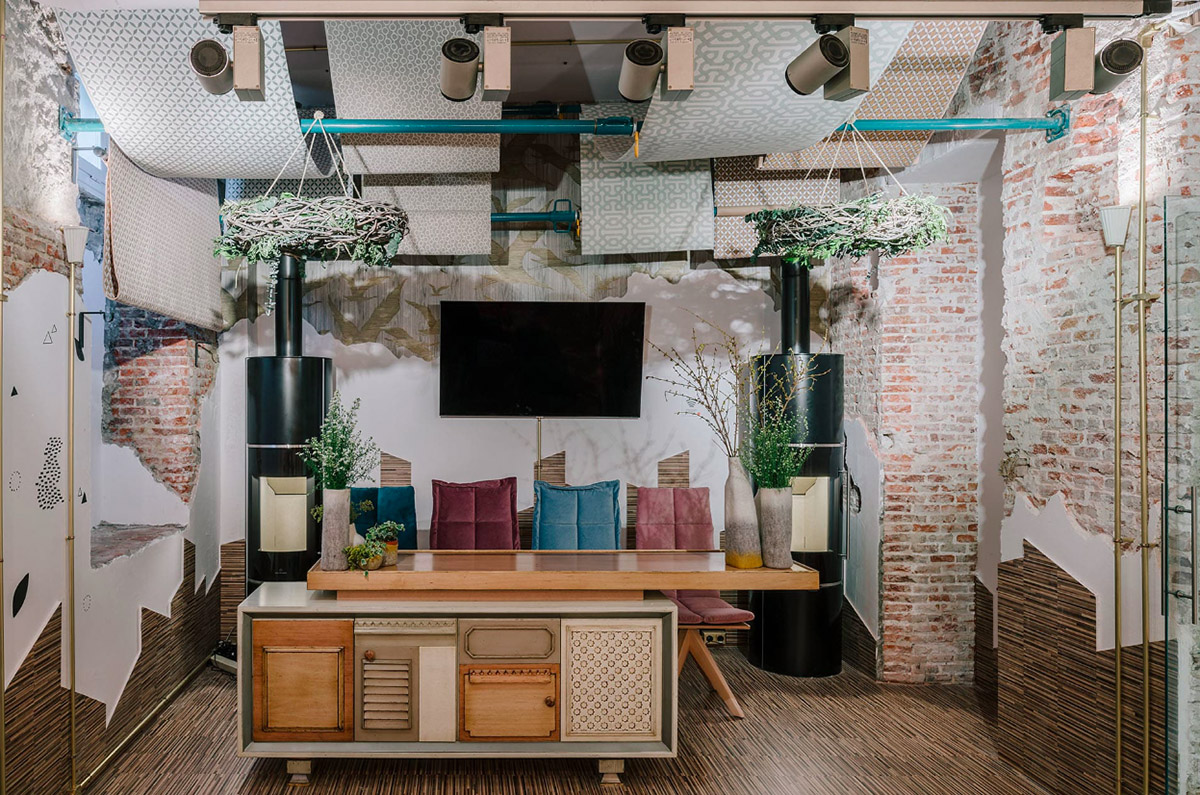 "We understand rehabilitation as an exercise of naturalness and imagination. We try to make patches and repairs beautiful and do not need to be hidden. But we combine this austerity with large doses of visual imagination, inviting visitors to sit in a wild garden, in an abandoned ruin, listening to delicious music even if we are in the old goal of Antonio Maura," added the architects.