Lessons From Kagal: The Hut-To-Hut prototype by Rintala Eggertson Architects 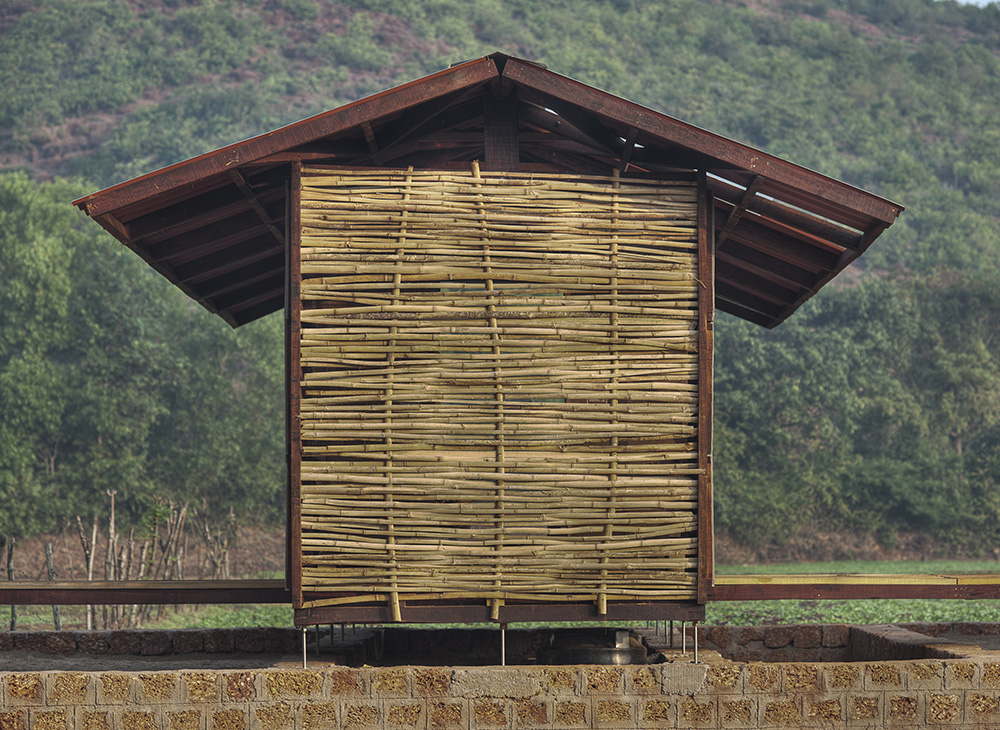 The ‘Hut to Hut’ is a cottage prototyped to serve as a model for sustainable development in pristine and fragile ecosystems. Currently, architecture serves the city life that is disregardful of awareness about nature and rural living systems.

Built at Kagal, this prototype was designed for the Panchabhuta Conservation Foundation which performs research on sustainable development in an estuary of the South West Coast of India. The project served as a wood workshop for students of University of Science and Technology in Trondheim, Norway. Designed by Oslo-based architecture practice Rintala Eggertson Architects, the small cottage is aimed to promote and serve as a home for eco-tourism.

The town of Kumta is located in the Western Ghats region of Karnataka. It is one among the towns leading up to Gokarna. An 11 km ride West from Kumta takes you to the Kagal area in the beach village of Aghanashini, where land meets the Arabian Sea. In the heart of the Western Ghats is the city of Sirsi which originates the Aghanashini River.

One of the yet-to-be-disturbed Rivers of India, it has its mouth at Kagal, letting its water free into the Arabian Sea. As if standing to safely send off the river’s waters, is a bunch of hills flanking this estuary, also forming the backdrop for the Panchabhuta Conservation Foundation’s site. From Kumta to Kagal, from tarred roads to rocky paths along the shore, rich red laterite soil is sited everywhere. 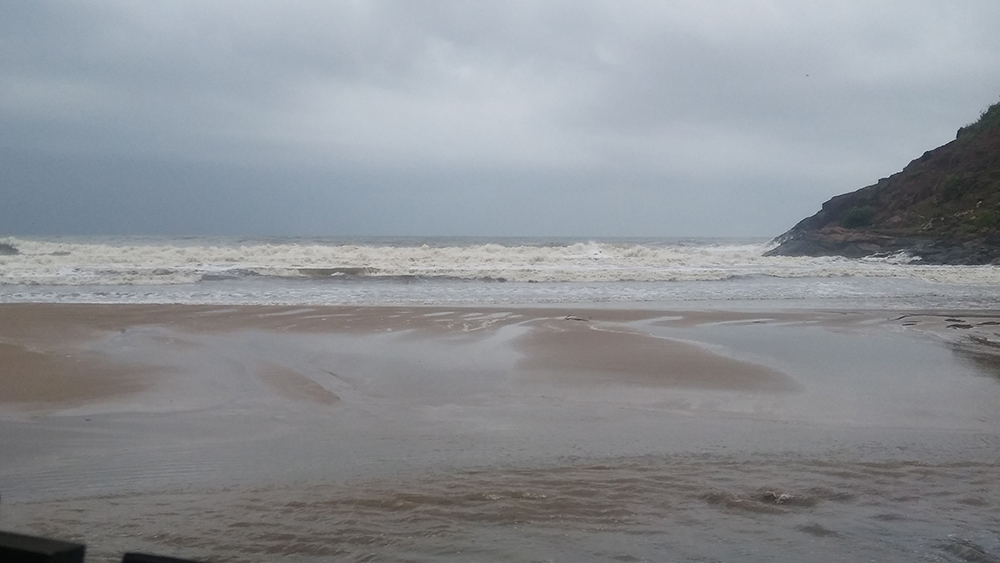 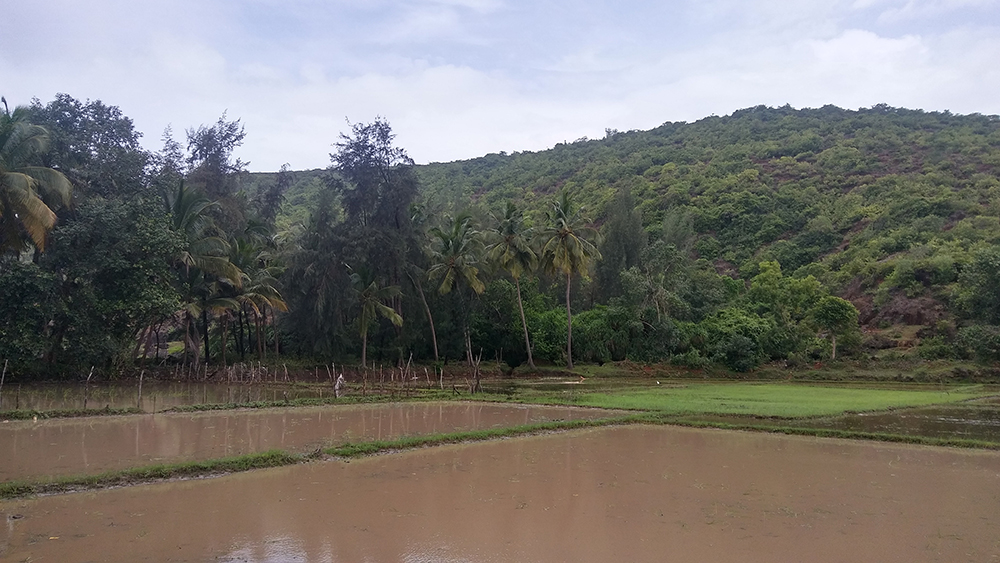 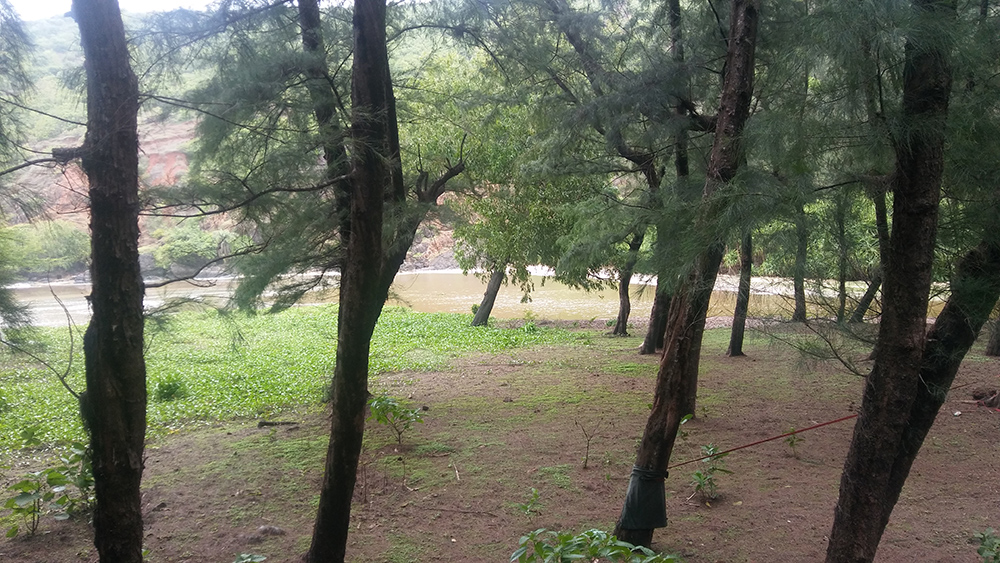 These rocks are then aired a few days to oxidise and harden more to develop resistance to excessive weathering. Houses of laterite masonry are quite prominent in these regions. The Hut-To-Hut prototype’s foundation walls are made of the same masonry, from which steel rods rise up to carry the entire structure. It looks as if the house is balancing itself on pinpoint rods. 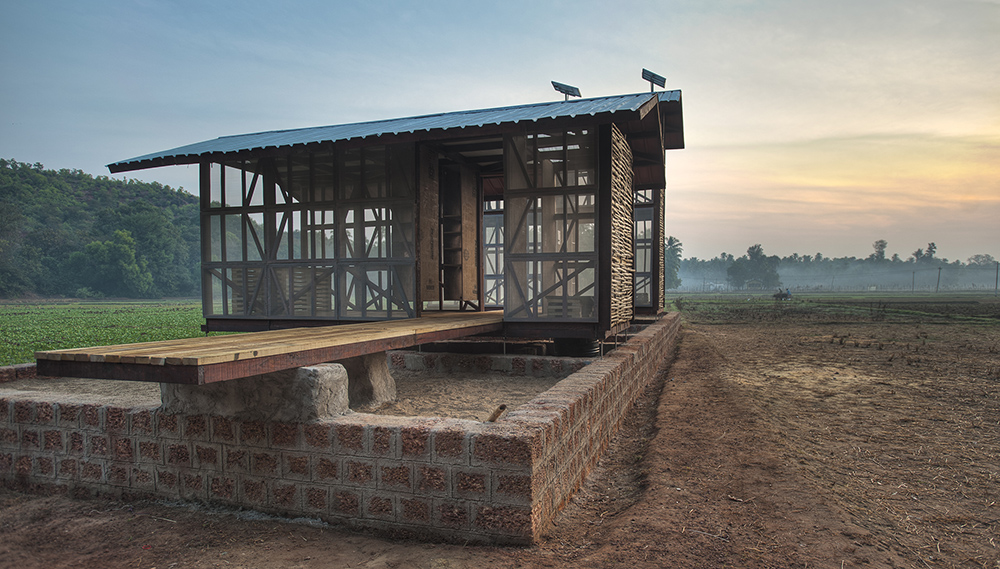 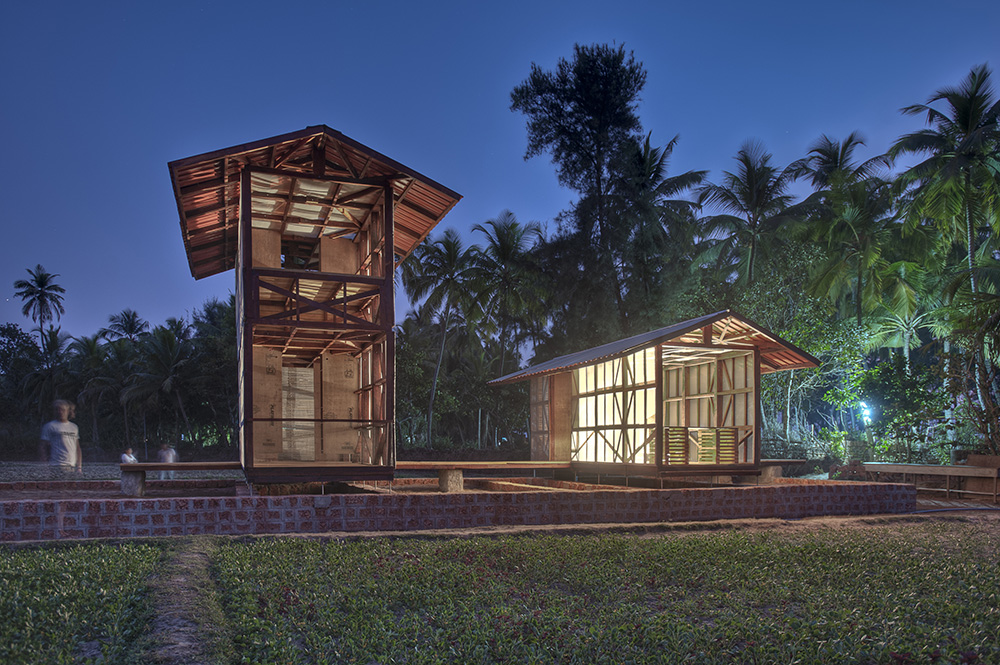 The wood is local acacia and eucalyptus, treated with a nut shell resin called cardenol to prevent termite attacks. The wall system is composed of wooden frames with cross bracings covered by mosquito net meshes. The furniture and partitions are of plywood.

The mezzanine level (originally meant to be accessed by an aluminum pipe ladder which is now used as a hand hold) is accessed by a wooden ladder. The tin sheet roofs atop wooden trusses were initially white painted to reflect the heat in summers. But now, thatching is added to serve the purpose. 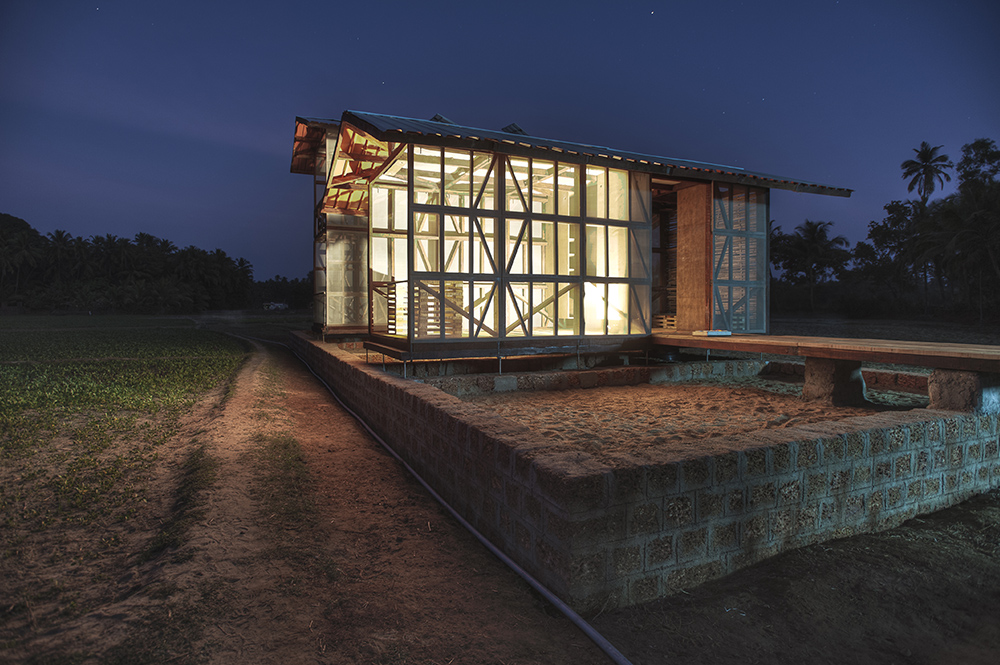 The building is equipped with a bio-compost toilet system, originally to serve for waterless conditions. But since the monsoons water log the plinth, compost pits weren’t ideal as they'll get flooded.

The solid waste is now flushed into the soil with a permacultural waste water treatment compost to mix with the courtyard’s base. The courtyard is covered with prepared compost material which receives the treated waste water and stimulates growth in the seedlings planted here. 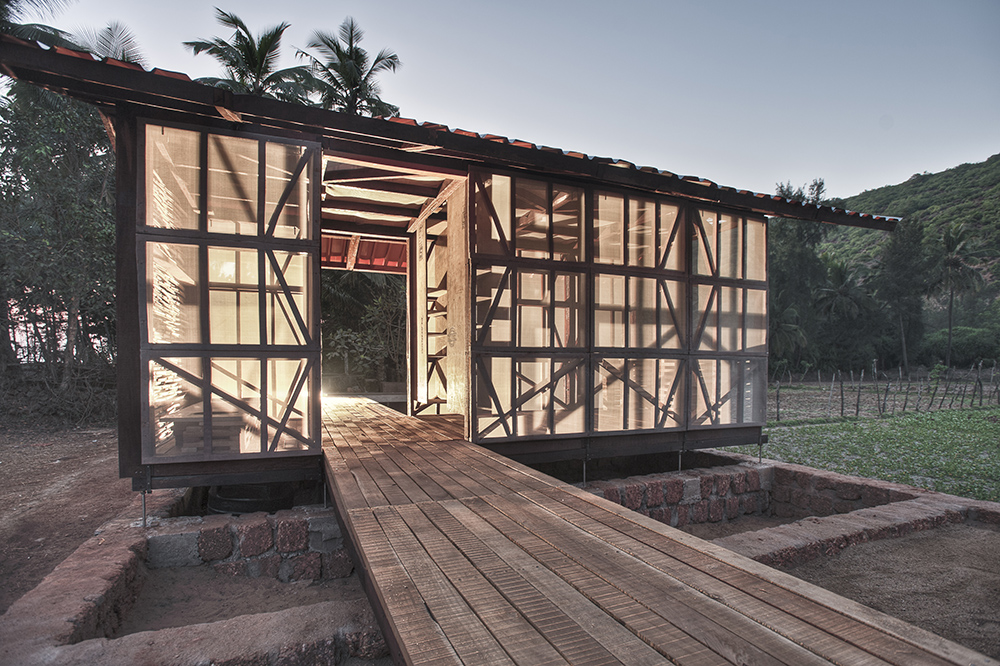 The architecture here, hence, has been quite experimental, eco-friendly and light weight. So it is a self-supporting building, damaging the ground the least and independent on the ecology. While one might think it kills trees, but the Panchabhuta Conservation Foundation suggests wood as a sustainable material because it can be replanted.

The rural way can’t seem comfortable for urban folk, but it makes a lasting urban setting when emulated. So, what living system does this prototype portray? You bathe in one of the two huts and the other has a loo. Both huts include beds. One can also be a store and the other can be a living room with mattresses on its mezzanine. These huts are completely multipurpose, and life happens between the two. This system is intended to get replicated later in its setting to form sustainable urban scenarios. 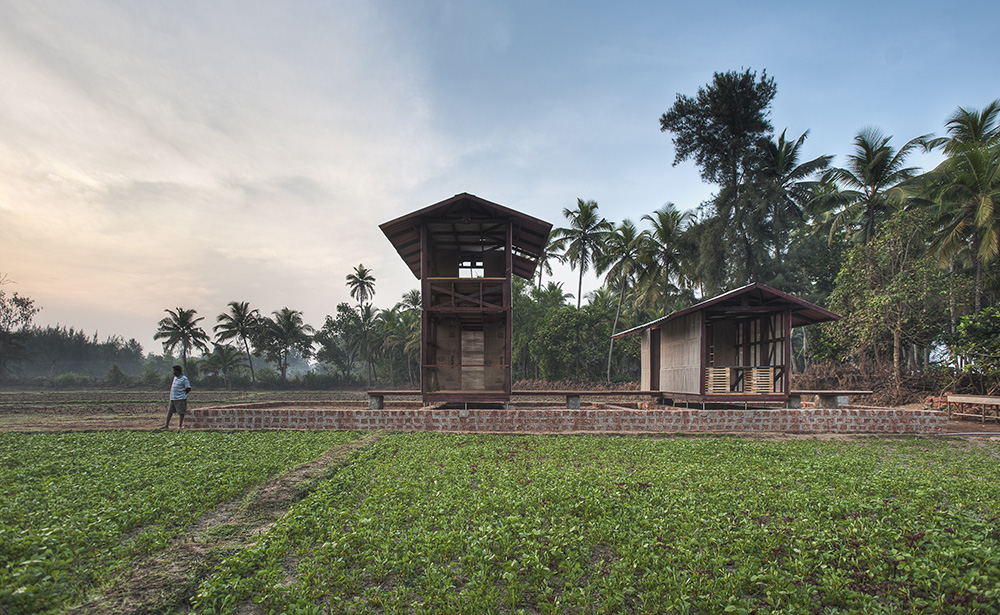 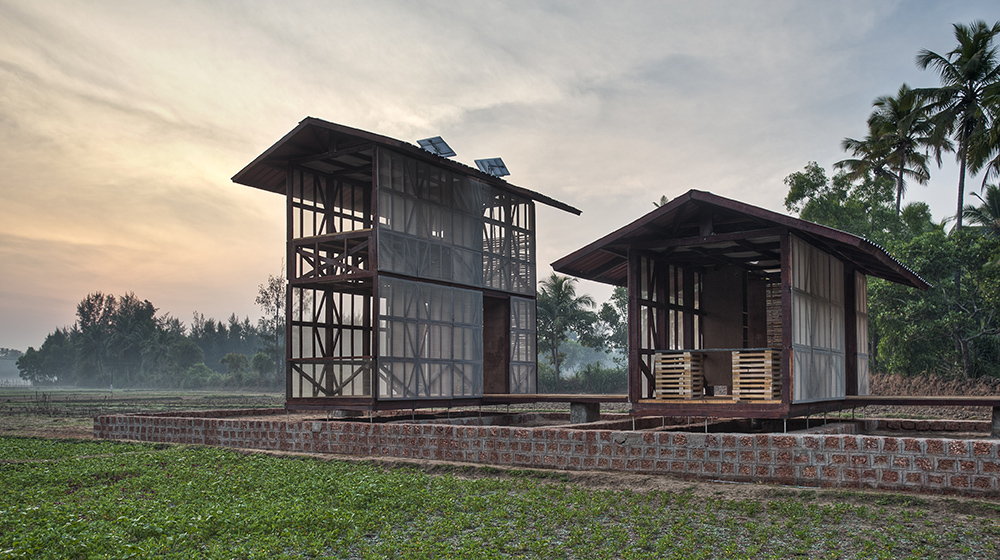 A wood framed structure is removable, alterable and replicable, while rock and concrete aren’t so. Concrete structures are meant to stand for 75 years, but they start degrading 25 years in. Wood structures, like this survive, as well as concrete structures are sustainable. What people would see in this as a con is that it doesn’t suit the city lifestyle. It isn’t fully sterile, and not enclosed like city buildings. It isn’t air conditioned, although has a micro-climate in it.

For a conservation foundation, there’s no better site to conduct their work. Cutting through this site of six charmingly small structures, is a little inlet of water, probably formed to water the farm fields at this spot. When the sea blows in a high tide at the shore, the beach here receives it into this inlet, creating splashy sounds and is a treat to watch the water push along the inlet. Rare species of birds and frogs, who would be a wildlife photographer’s dream, visit these farm fields during the monsoons. 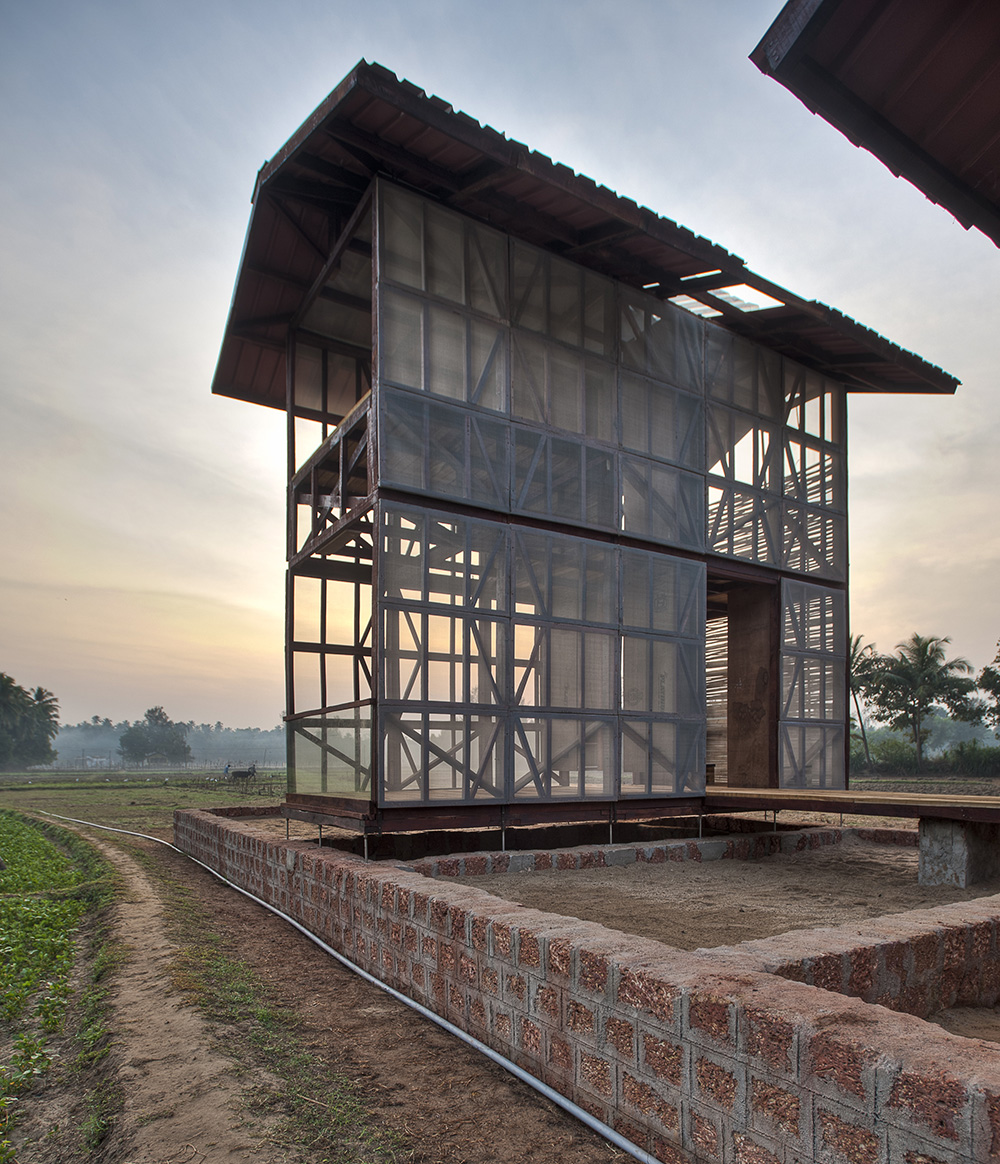 At the estuary, where Panchabhuta’s site is located, the green cover is plenty, the water is clear and running, the high tides keep up, crashing and exploding into the corners of the hills here.

The frequent showers keep the shore’s livelihood well hydrated, and at peak monsoon times, "the rain is almost an horizontal spray," says Panchabhuta. The setting, hence, is quite sensitive to adapt into, and the Hut to Hut prototype does so well. 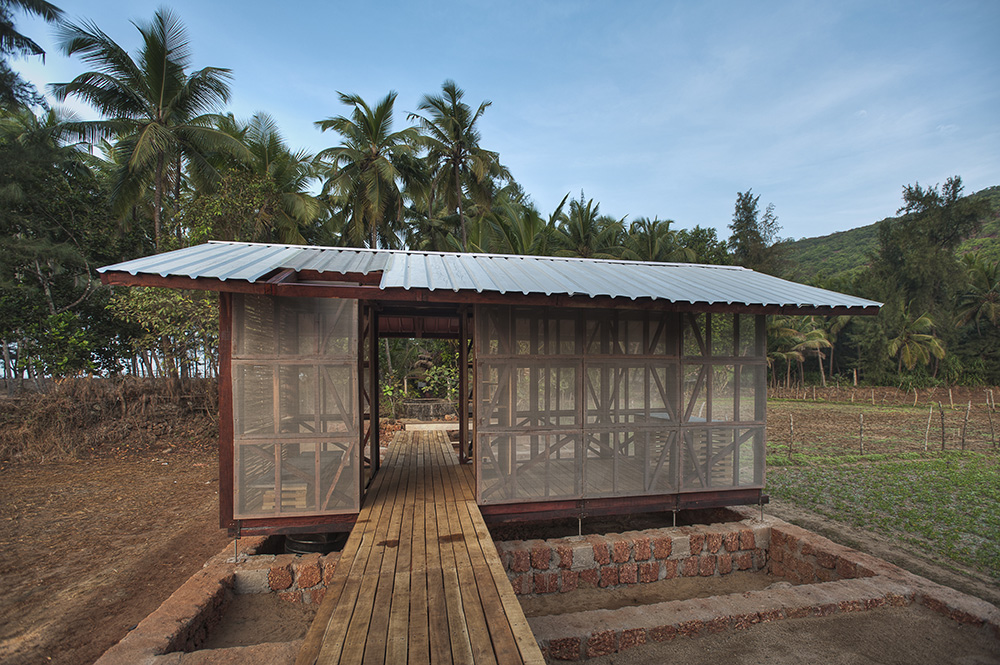 Eco-tourism, the Hut-to-Hut’s purpose here, is the kind that has less impact on the more fragile, pristine and usually protected environments. Its purpose, more than being a retreat, is to educate travellers and provide accommodation to researchers.

Hence, architecture that is itself less impactful on nature helps eco-tourism achieve its goals and the Hut to Hut prototype is built for this purpose. And with these principles, Panchabhuta aims to rewrite the future of safeguarding India’s nature, that is, to get along with it and not conquer it. 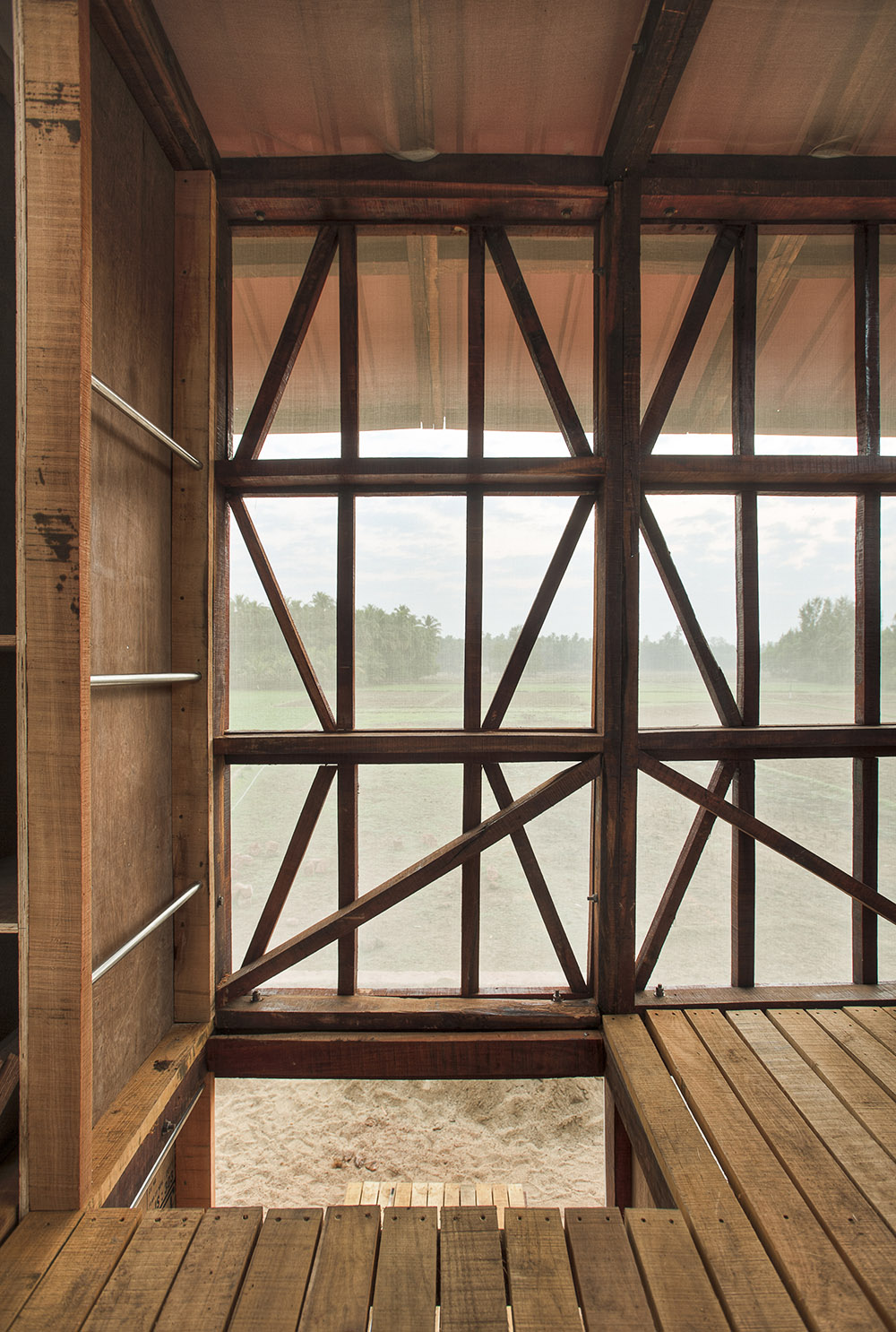 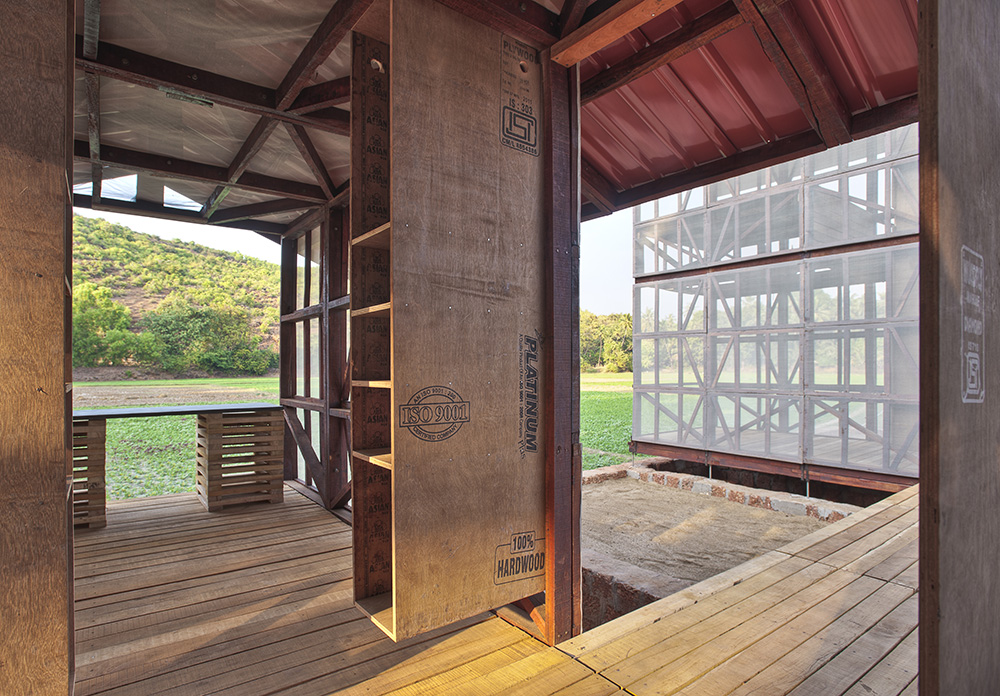 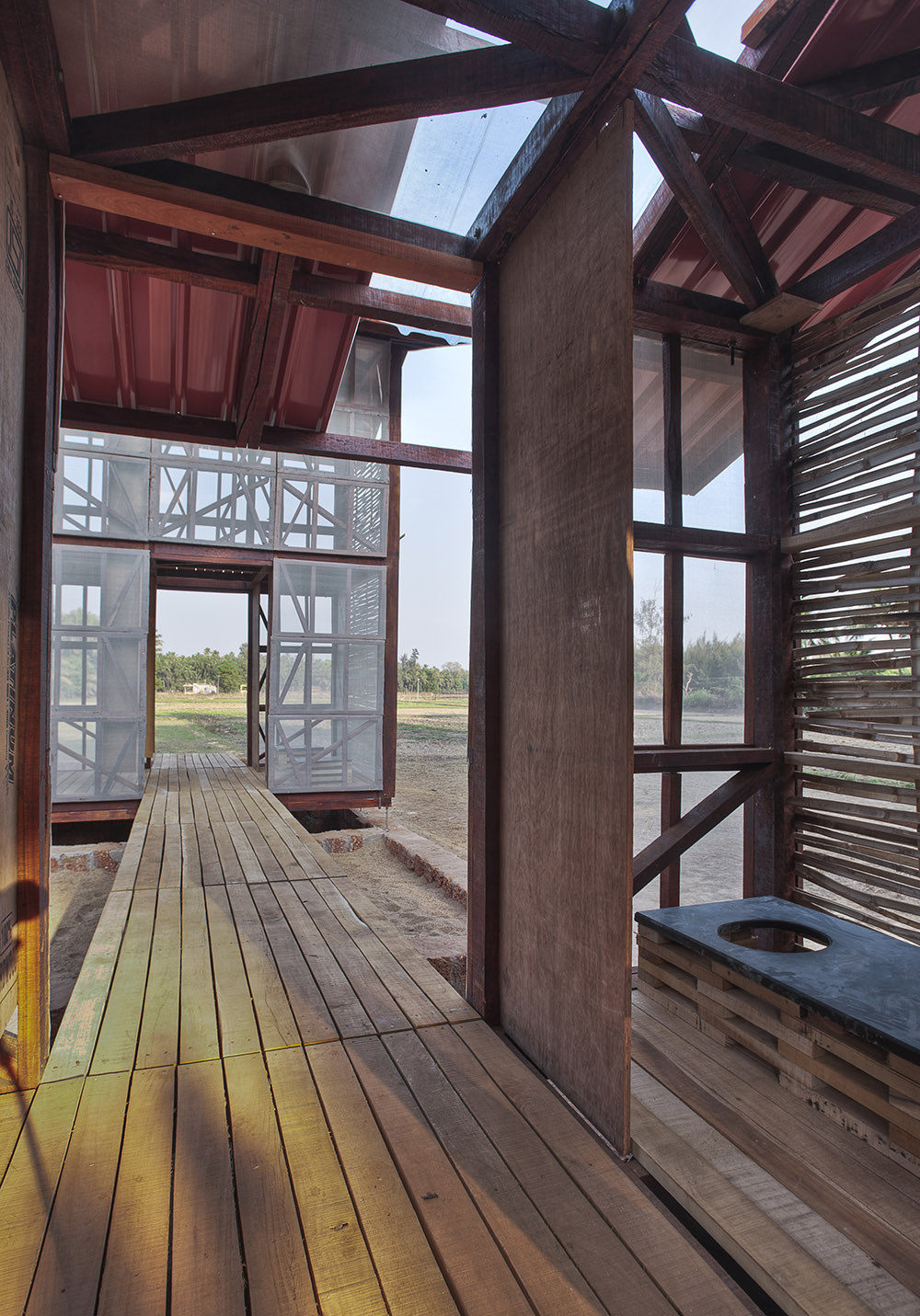 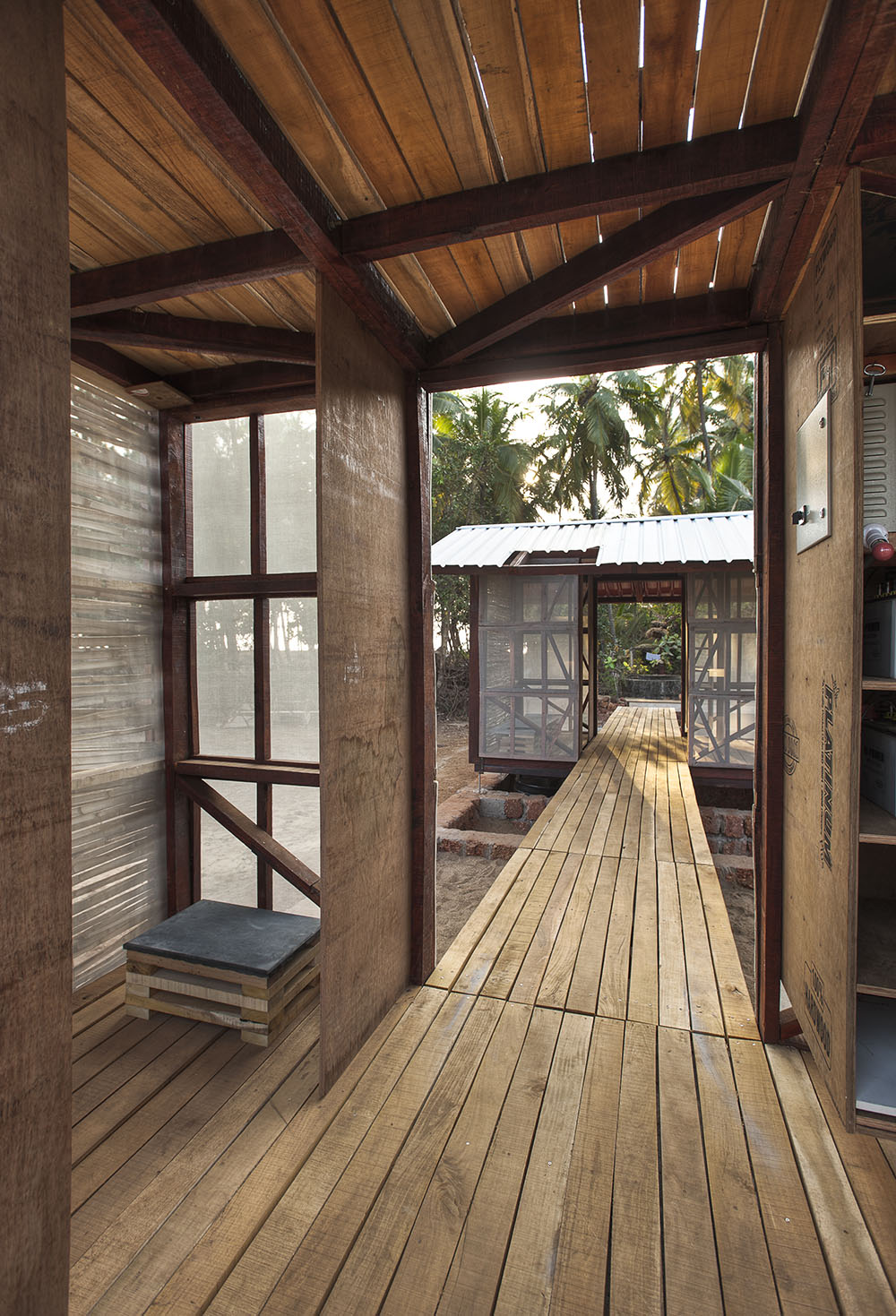 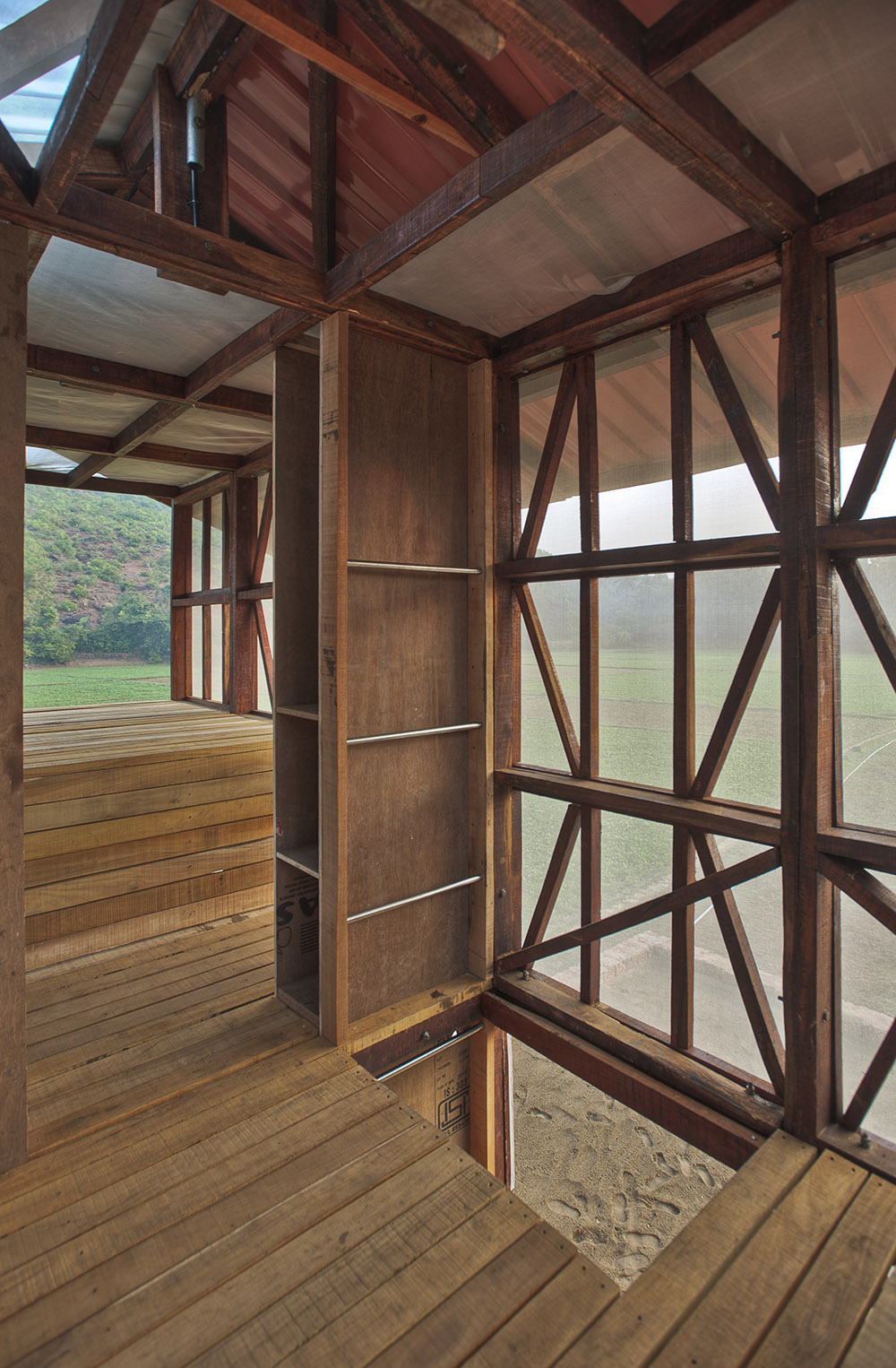 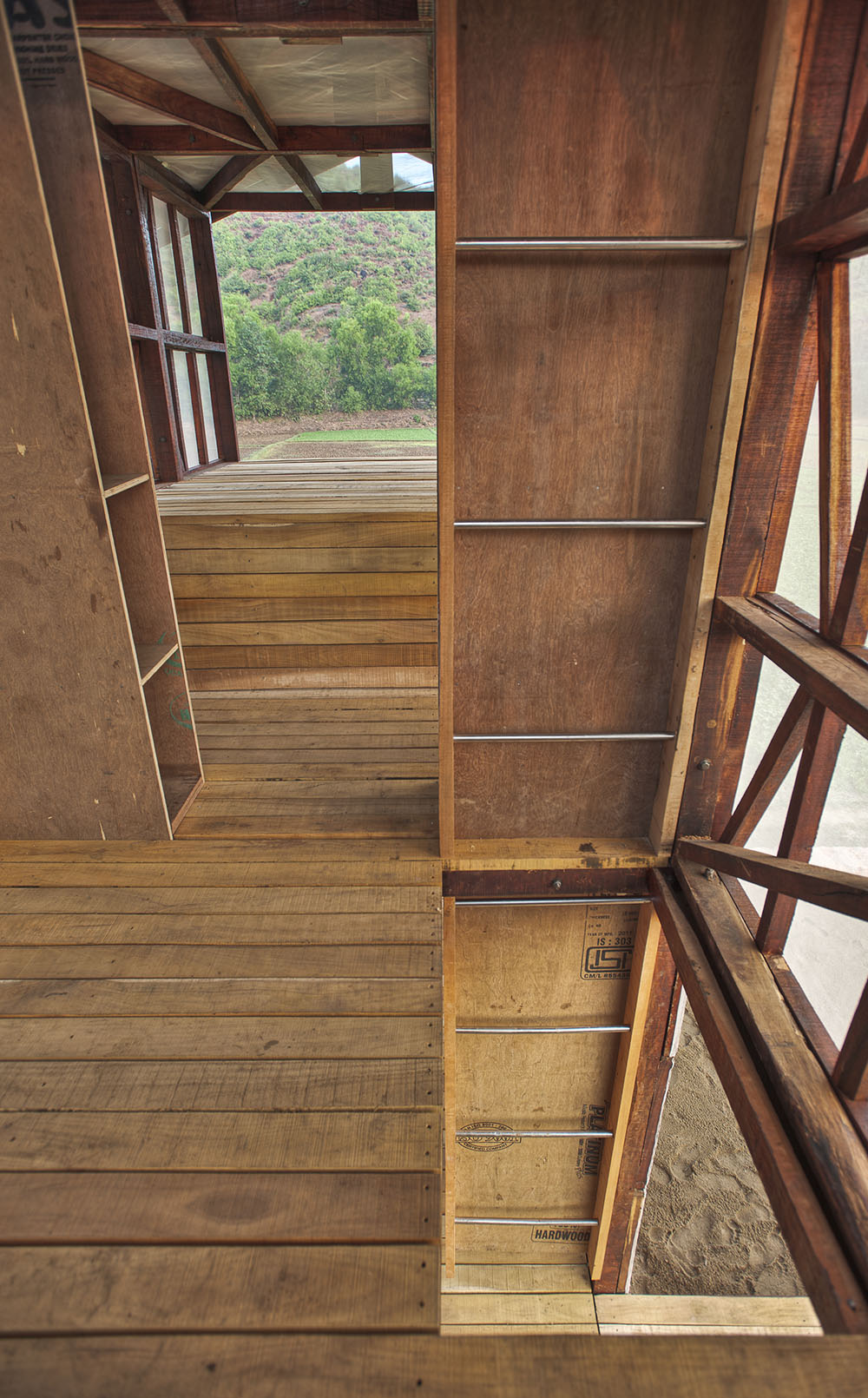 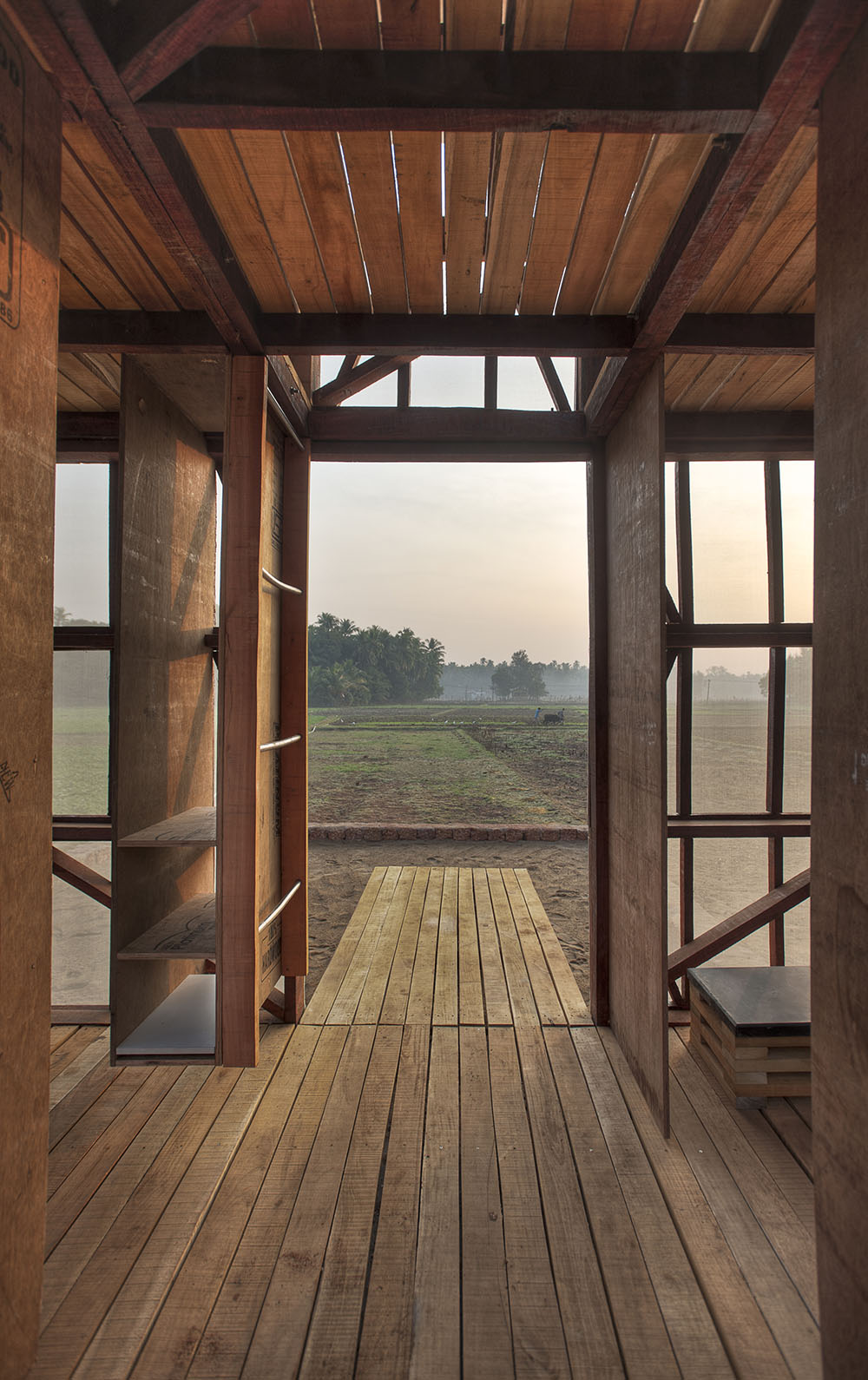 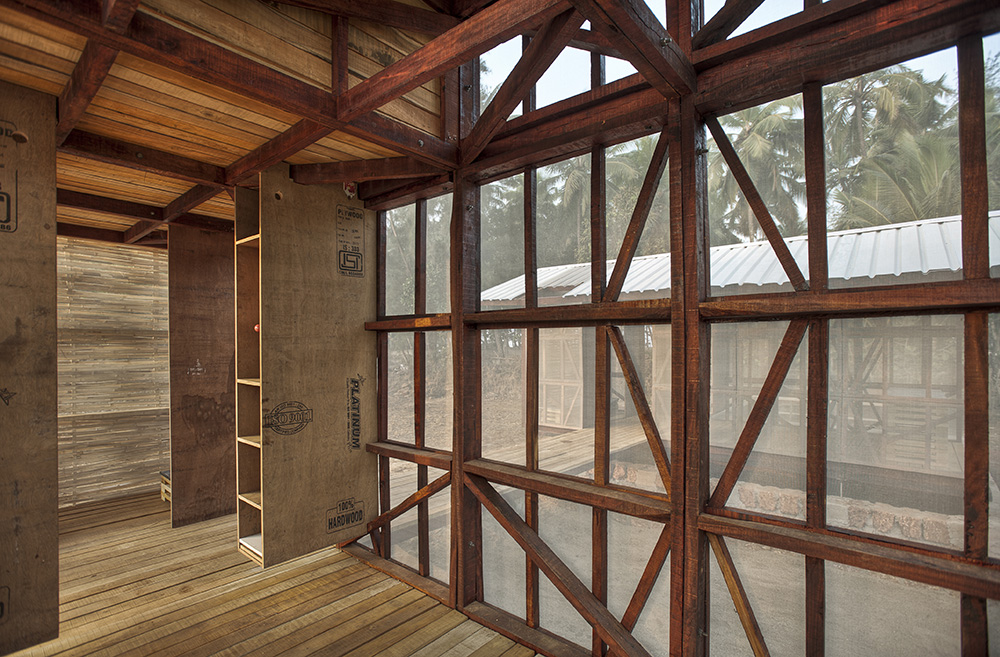 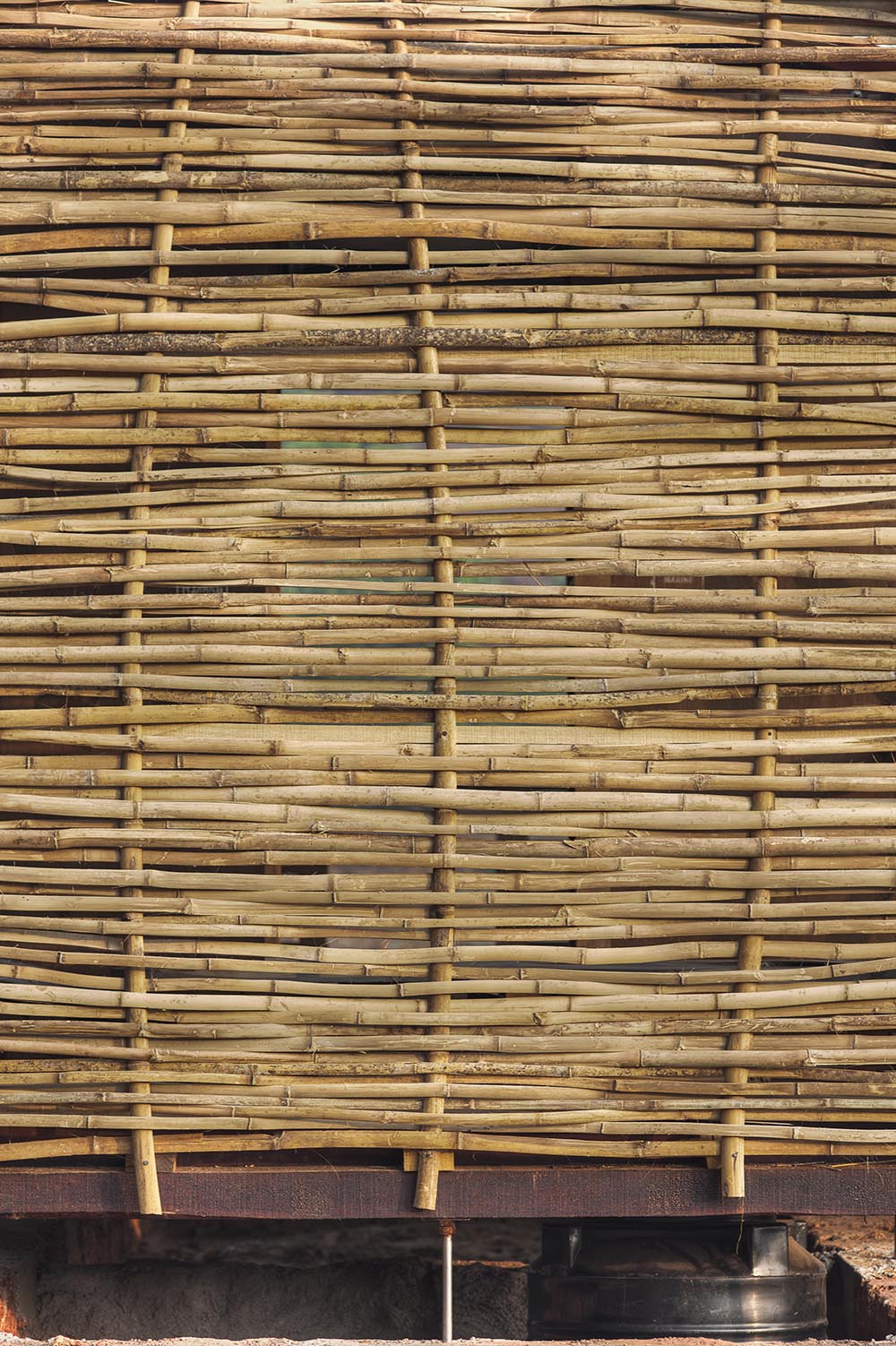 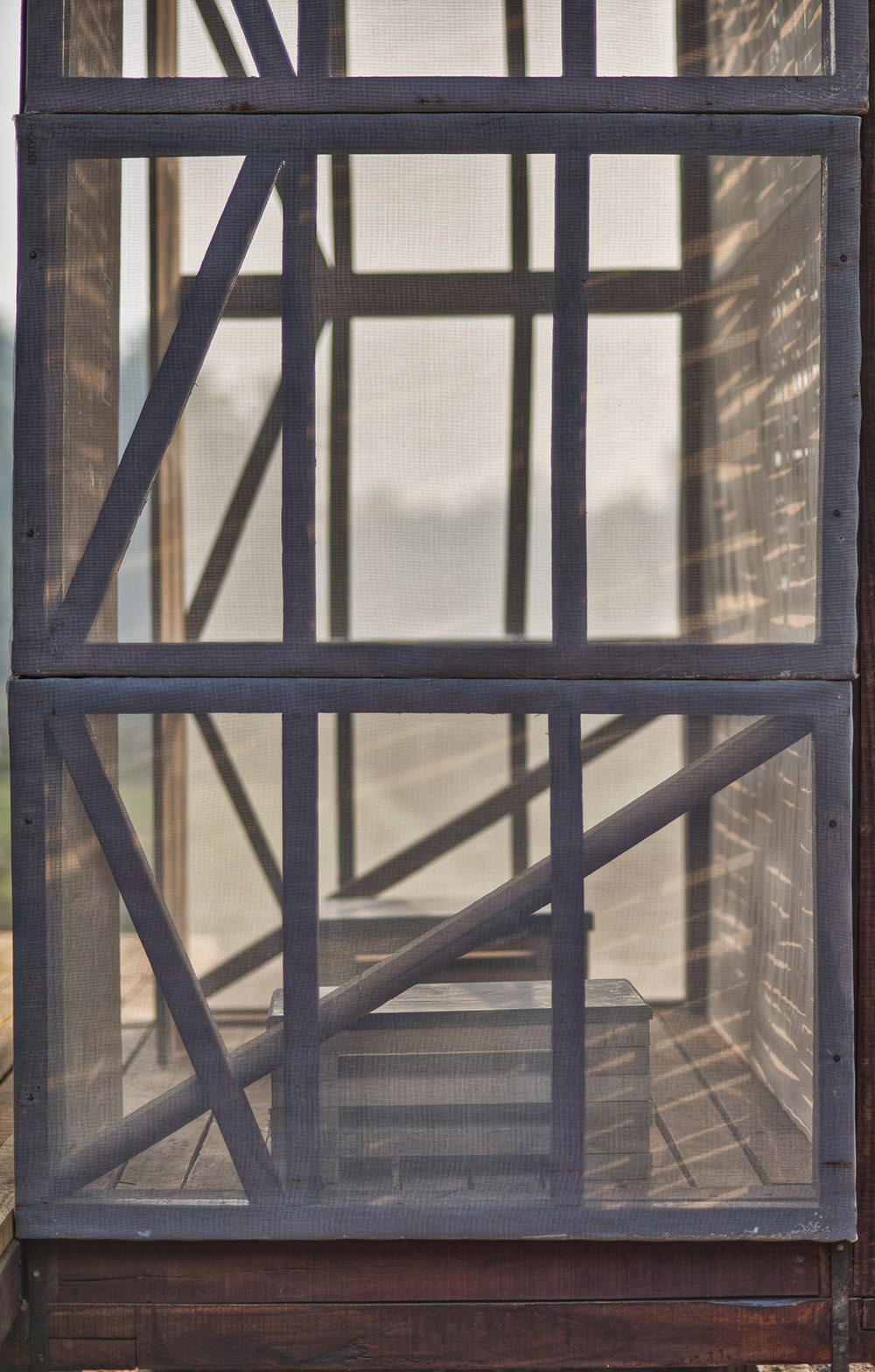 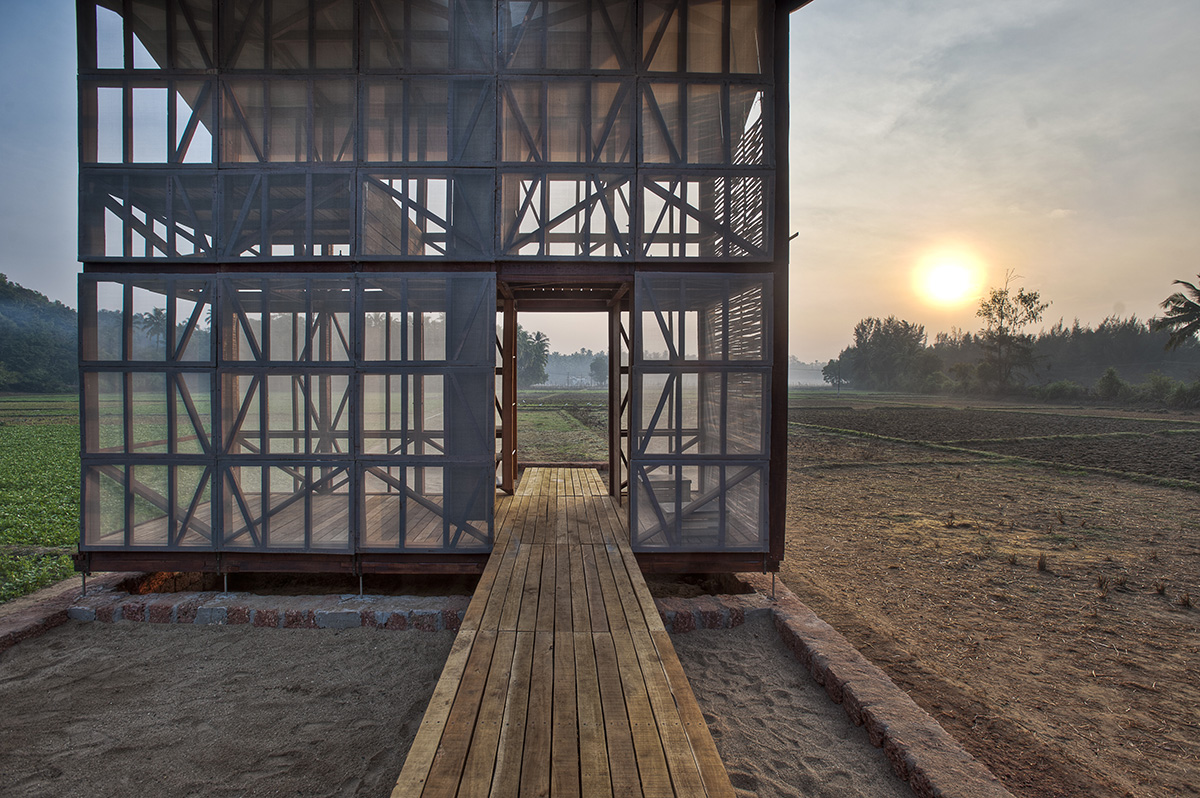 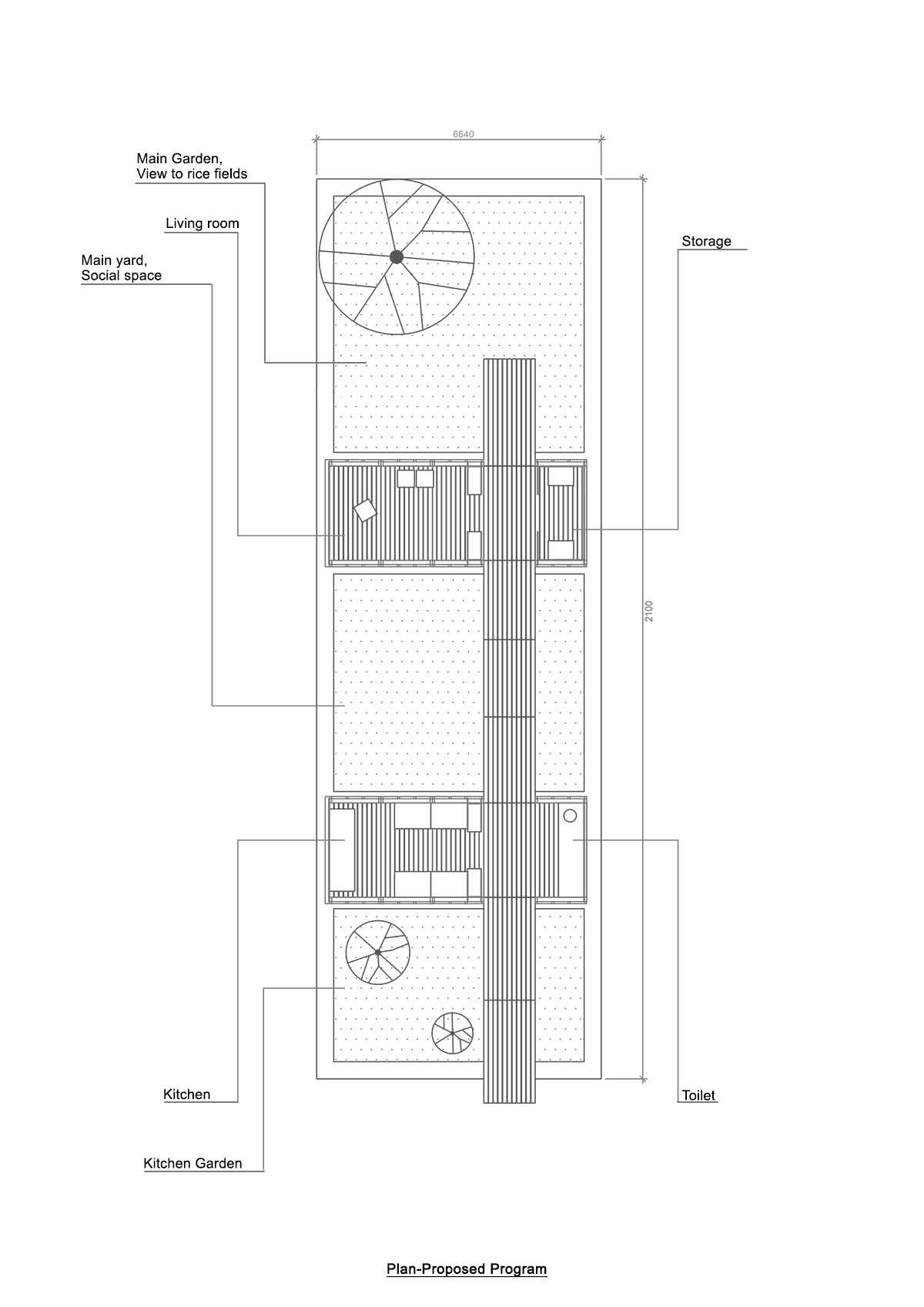 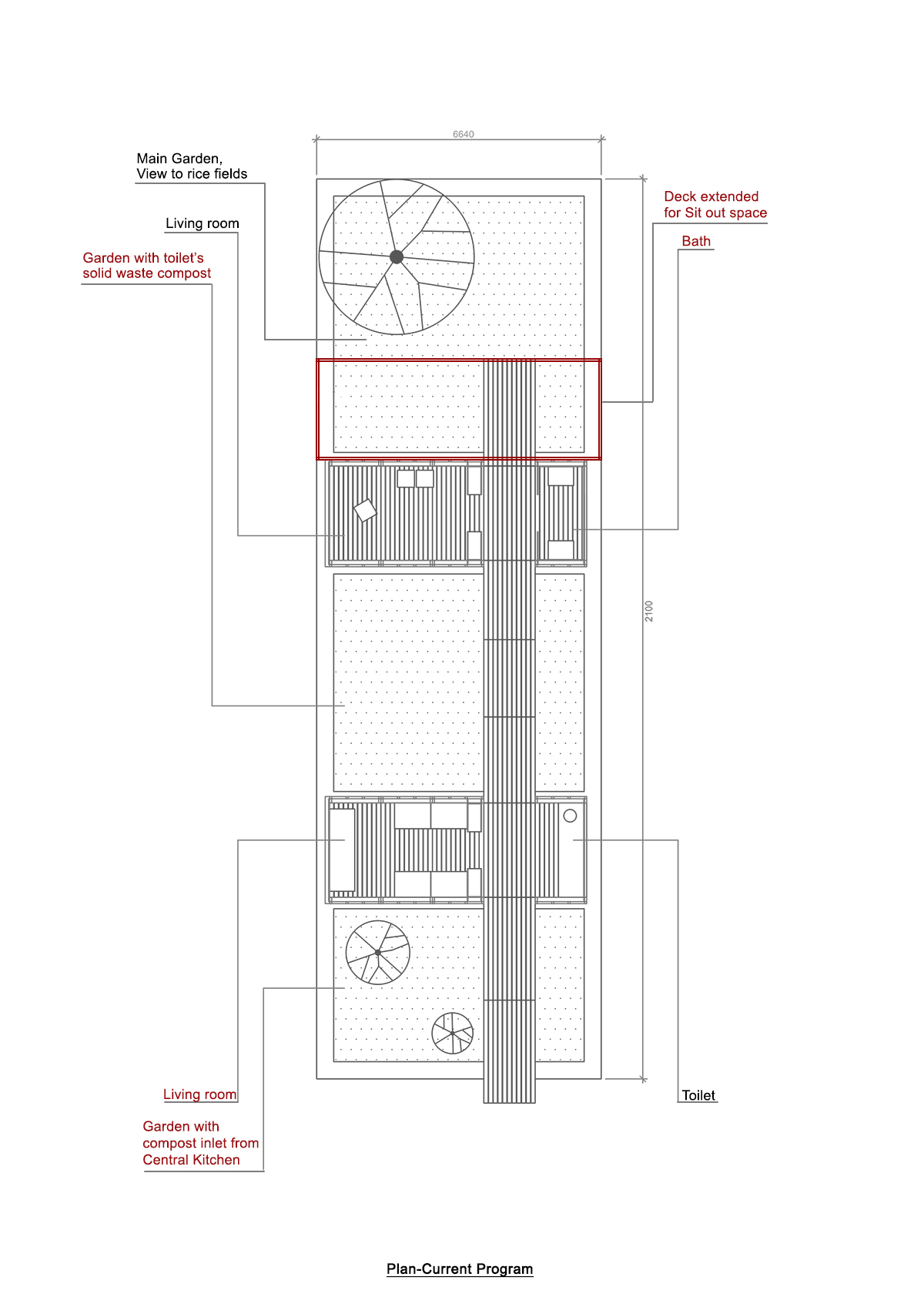 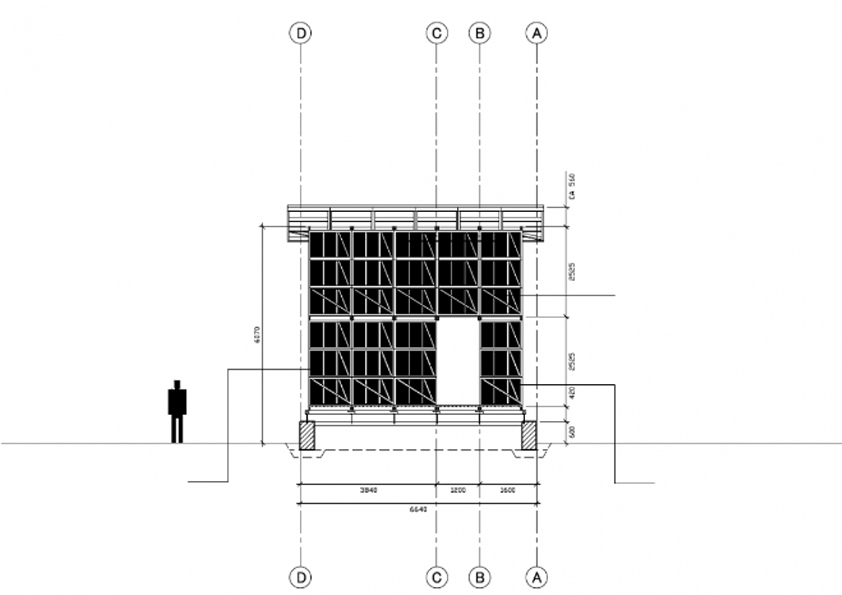 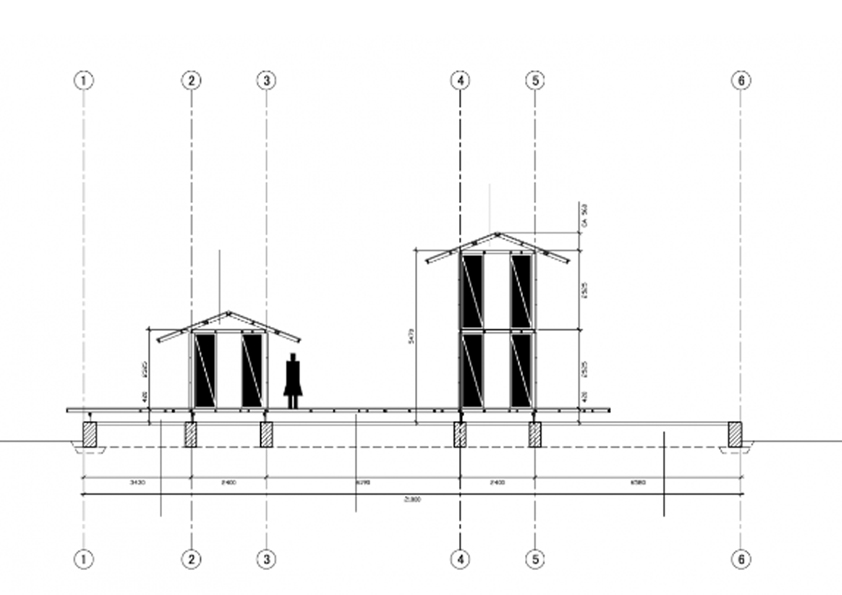 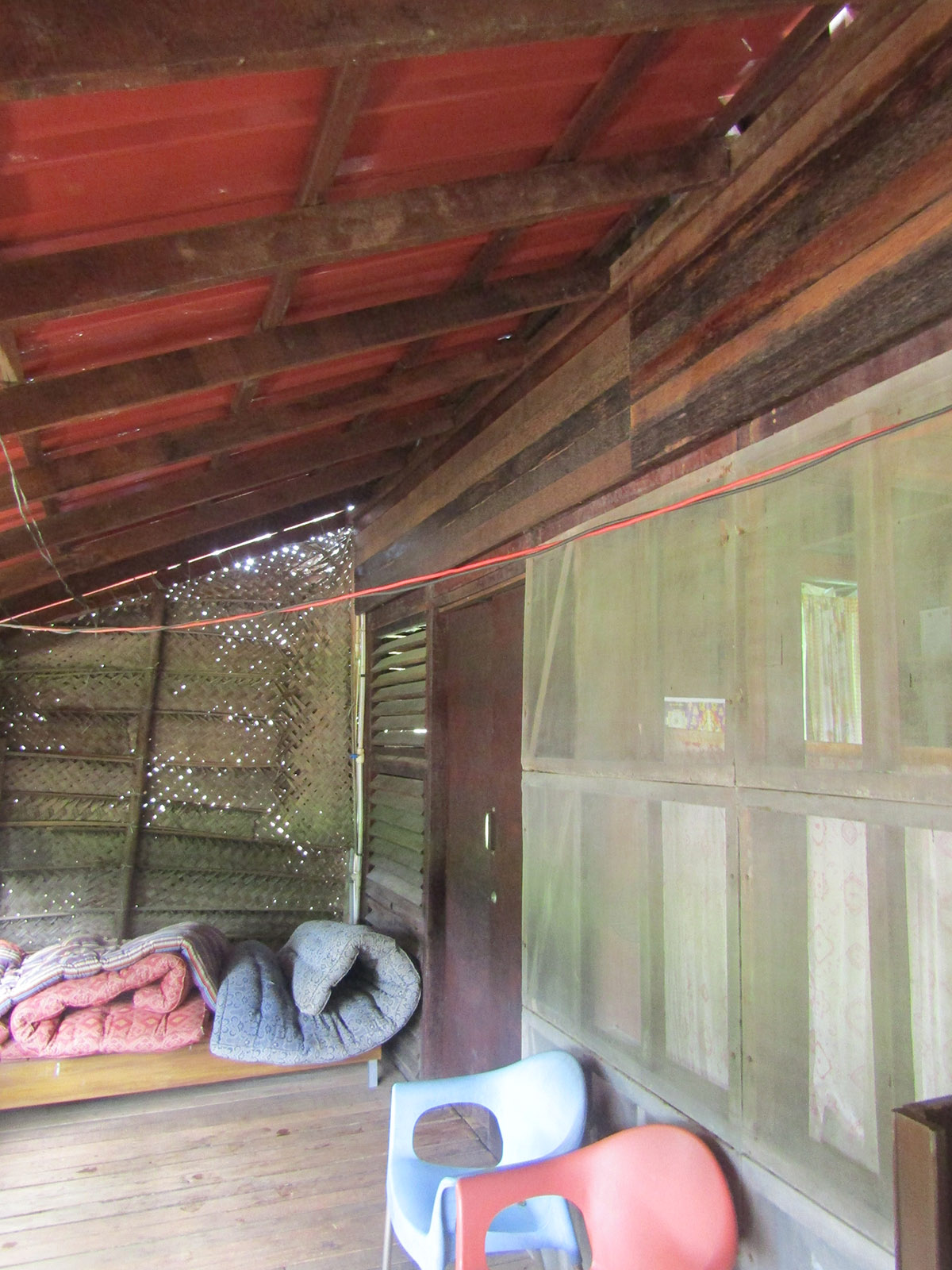