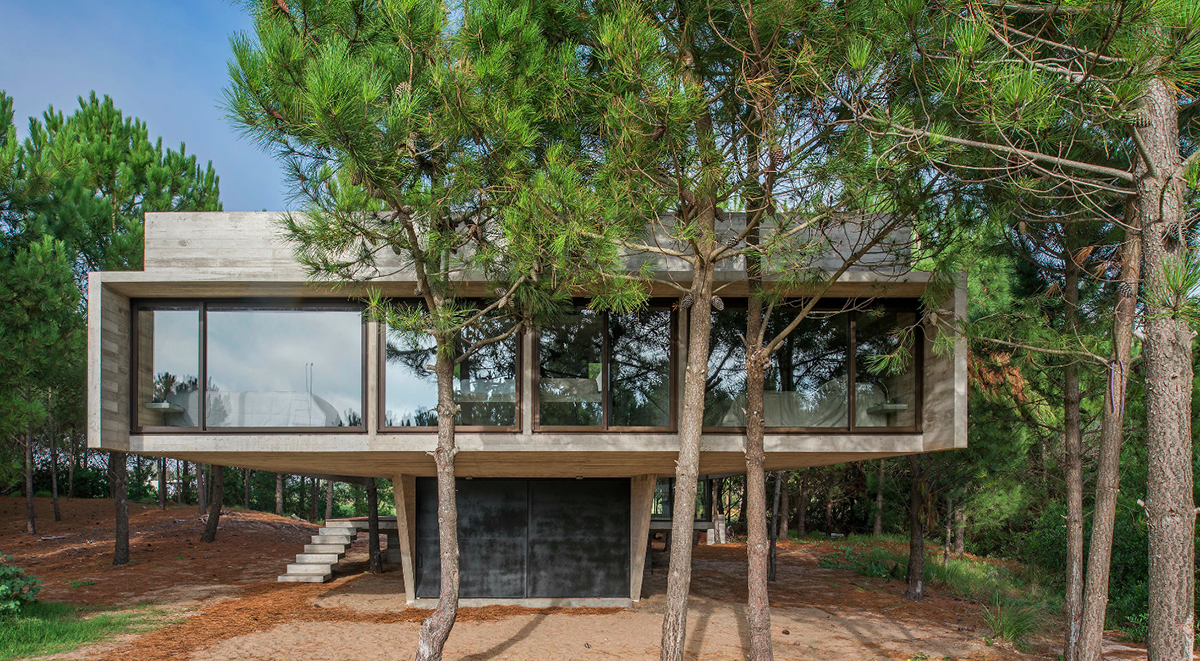 Argentinean architect Luciano Kruk-designed family house is situated within the wild pine forest of Costa Esmeralda - a private development 13 km north of the city of Pinamar and four hours away from Buenos Aires city. The house gets lost within these pine trees with its exposed-harsh-concrete appearance and flat structure.

Named S+J House, the architect removes only the trees on the construction site in order to build this family house. The house is looking to the seaside from its front facade, while its staggered platform is extended to the backside of the forest. The front facade is raised above the ground on concrete base to provide a closed space for beach vehicles and a semi covered area parking lot, was specifically requested by the client. The client, composed of a group of two families, requested a house that could lodge both at the same time and that could be rented out. The main goal of this project was to design a recreation house, built entirely out of exposed concrete with minimalist interior spaces and little maintenance requirements. 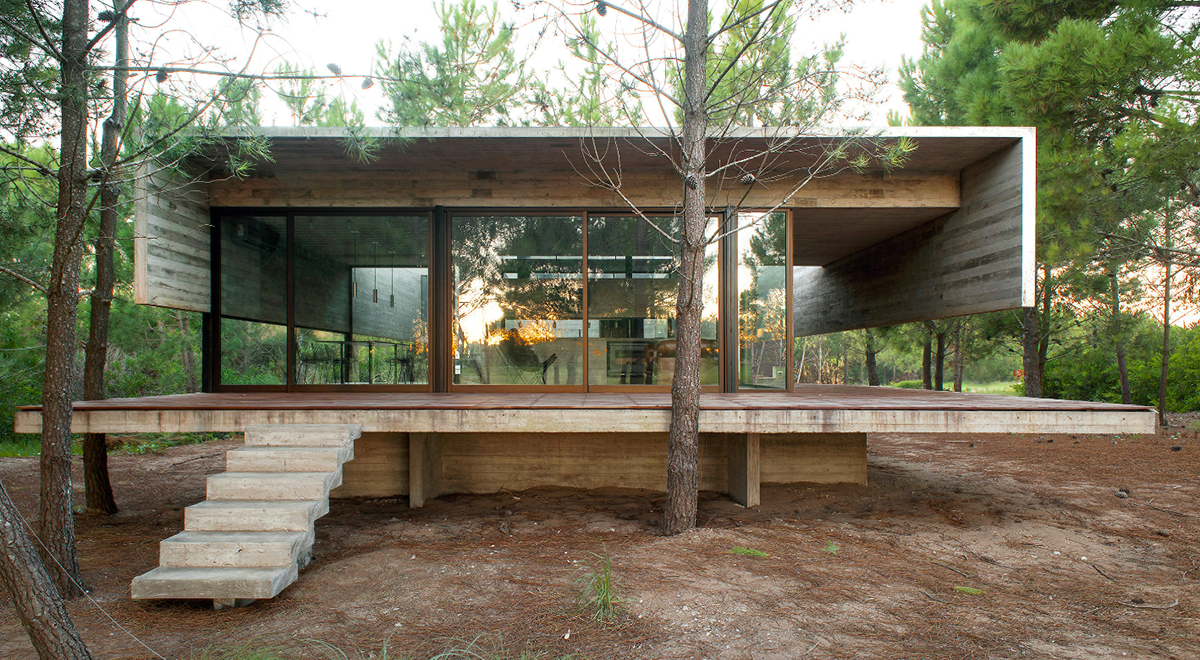 "The brief included two en suite bedrooms with their own closets and two cabin-like minimum rooms sharing a bathroom. So as to make the social area the most important place in the house, an external expansion was requested," said the architect.

"Special emphasis was laid on the need to establish a fluid relation between the inner spaces and the exterior, which would allow a closer experience of the forest. In order to preserve the native vegetation, the house was set longitudinally and the setback on the front and the sides was expanded beyond the minimum required by code. By so doing, the house ended up surrounded by pines." 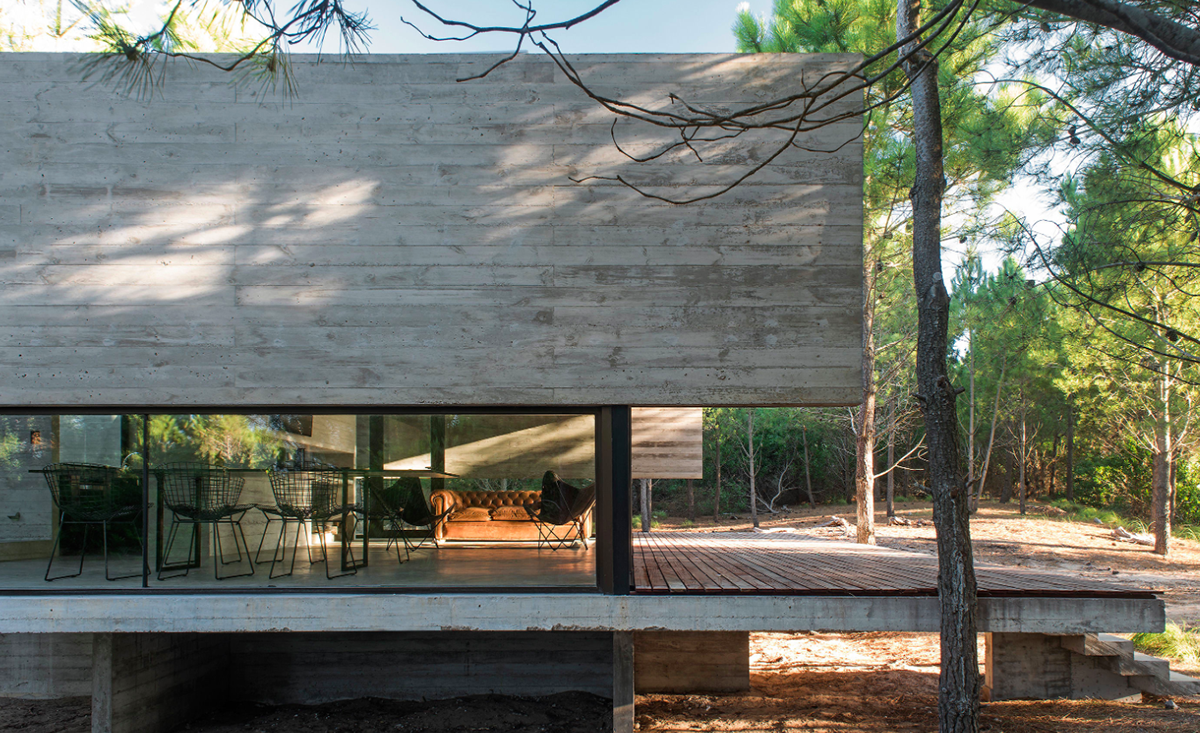 Resembling a concrete spaceship, the house is comprised of two staggered platforms disposed at half-height and connected through smoothly sloped ramp-like stairs and an empty space in which the pine forest becomes a part of the house.

At half-height of the entrance level and set on the natural terrain, the platform at the back houses the social area, which opens into a terrace overlooking the golf court behind the plot of land. 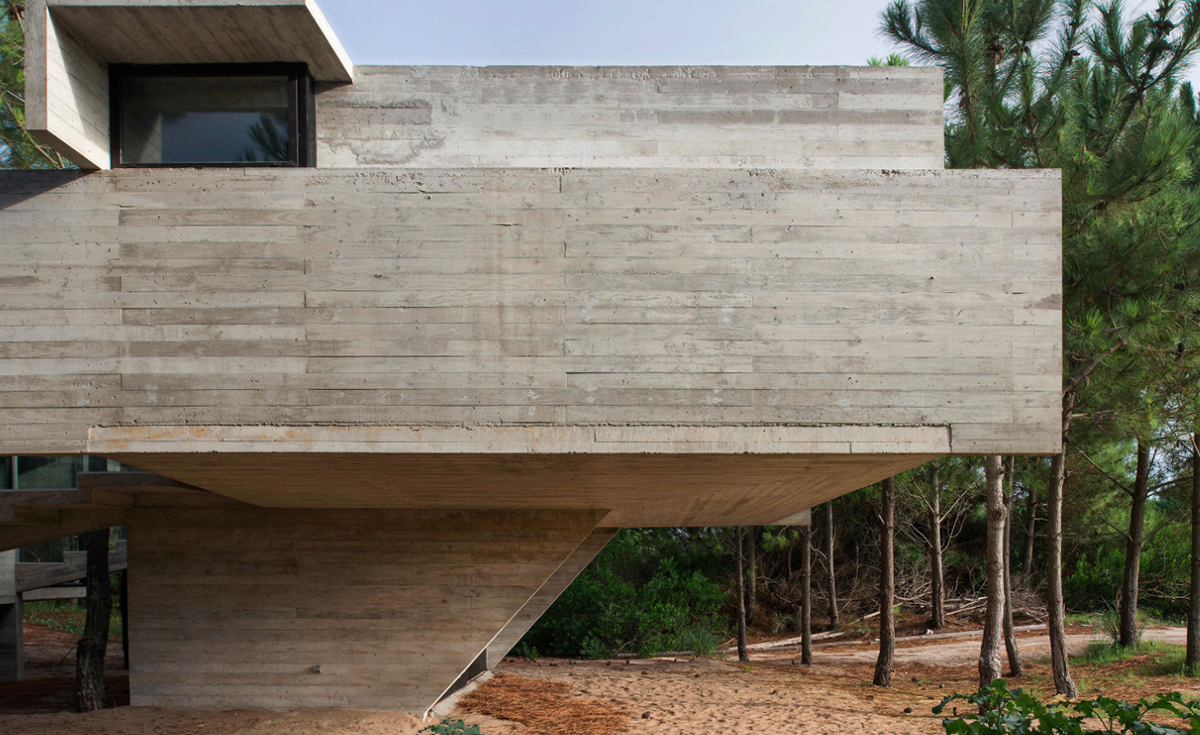 Half a level above the social area, the bedrooms’ platform rises on the front, underpinned by a prism lodging service and storing areas. Aiming at centering the loads to the smallest space possible, this supporting volume was set back and reduced to its minimum as an attempt at once to enhance the feeling that the upper box is floating and to take advantage of the semi covered space on the natural terrain as the parking area the clients had requested. 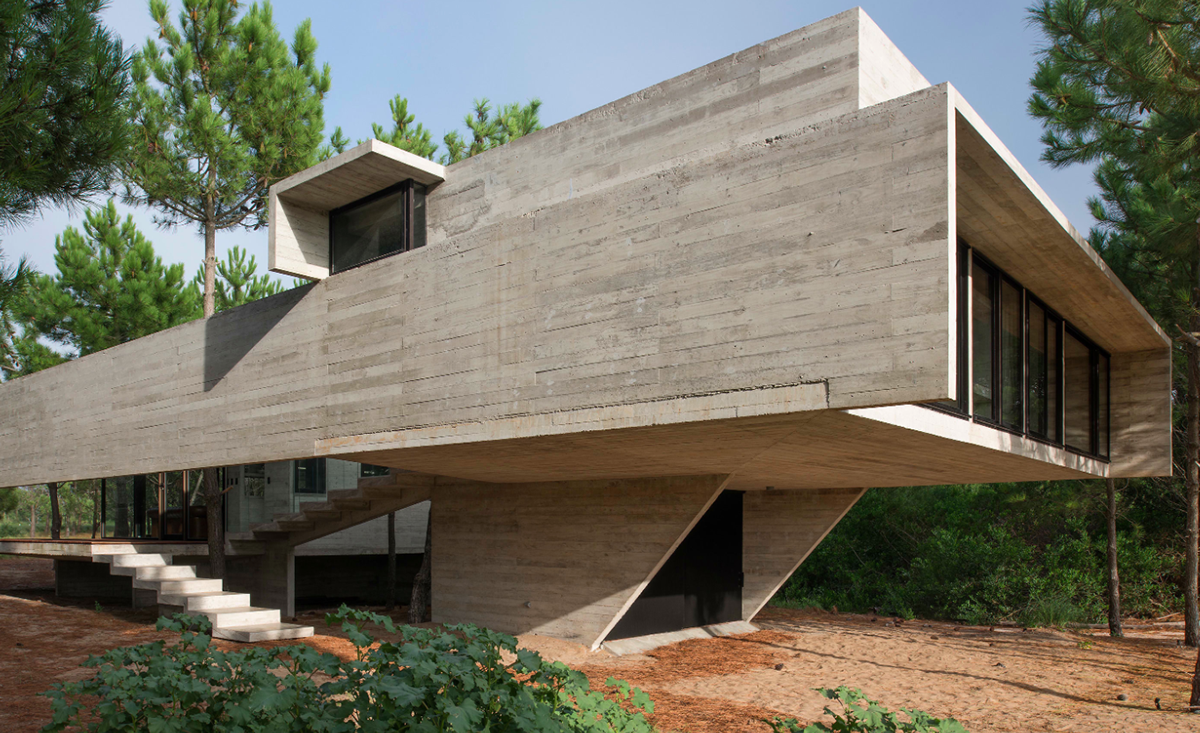 The glazed bridges connecting both platforms traverse the void space through a pines-surrounded promenade upon which light falls from the rooftop and drips through the tree branches. In this way, the forest’s vital energy is introduced into the house. 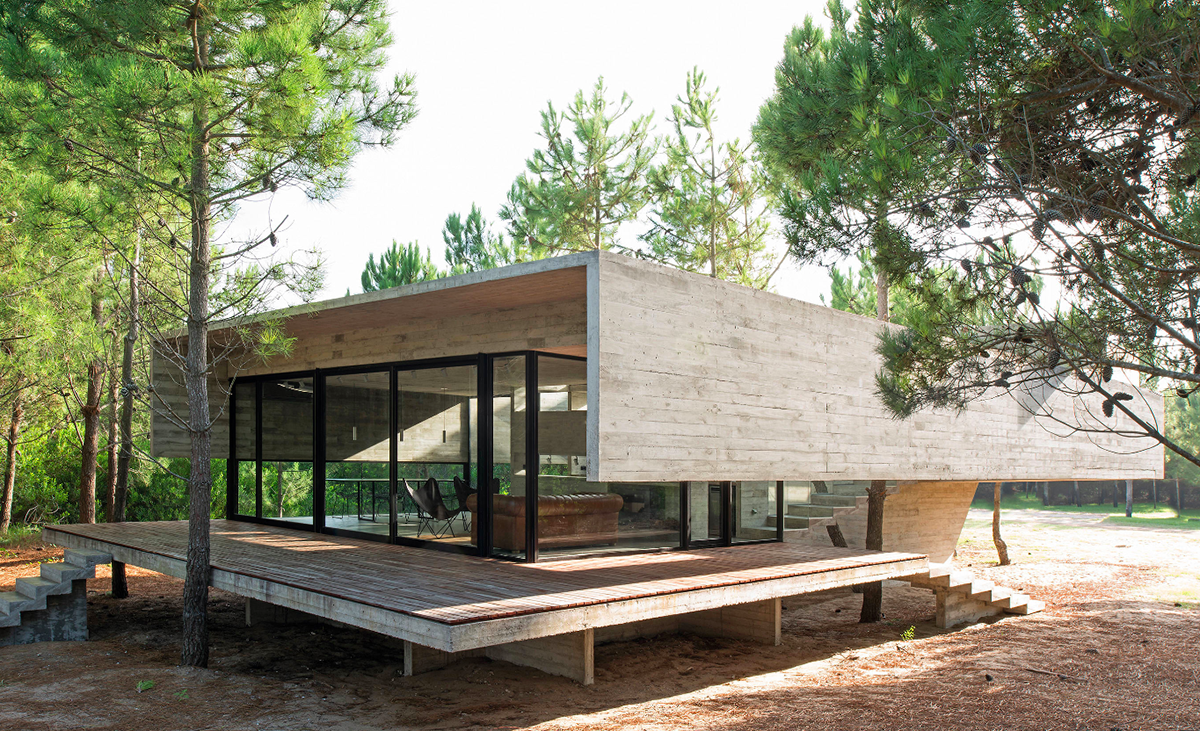 While both the exterior shell and the inner partitions are made of exposed concrete, the floors are made of smooth concrete. In order to emphasize the openings without confronting this material’s stony essence, dark bronze anodized aluminum was used in the framings.

In an elementary architectural scheme—synthesized in two platforms connected by bridges and green patios—a continuum stripe made of concrete swathes the whole house, thus producing a single volume, composed of void and filled areas, that at once shelters the interior space from the outside view and preserves its intimacy without dissociating the house from the nature around. 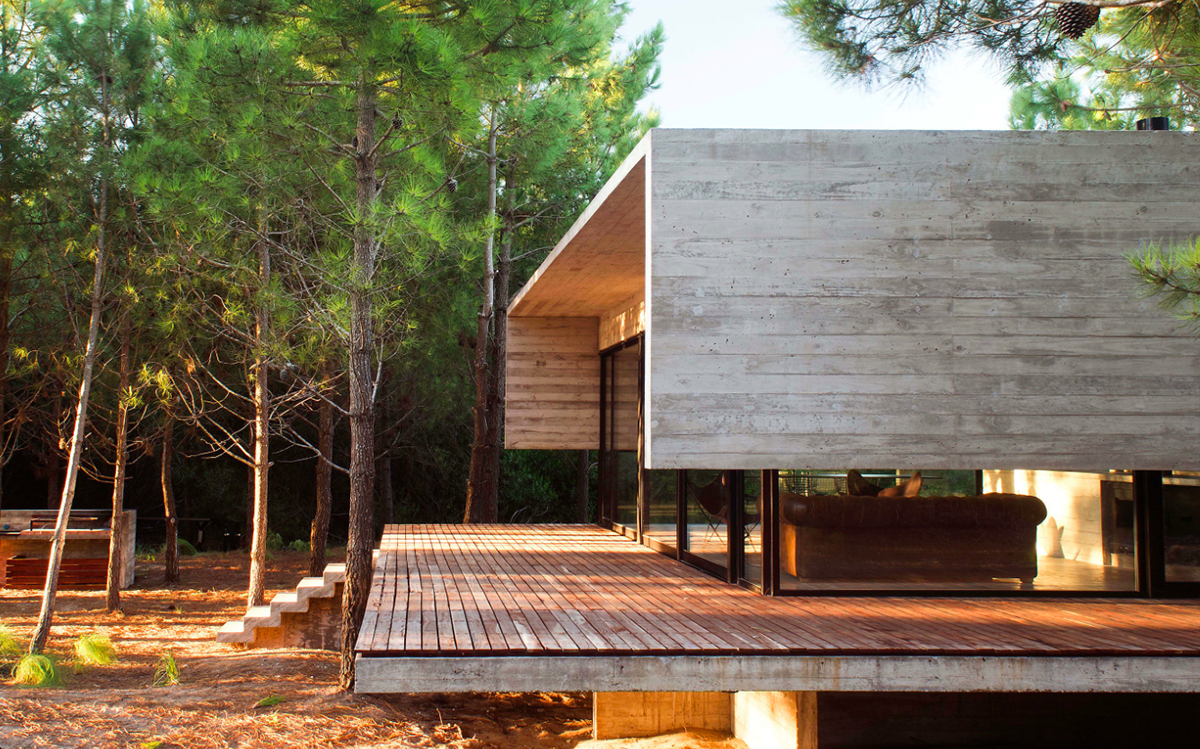 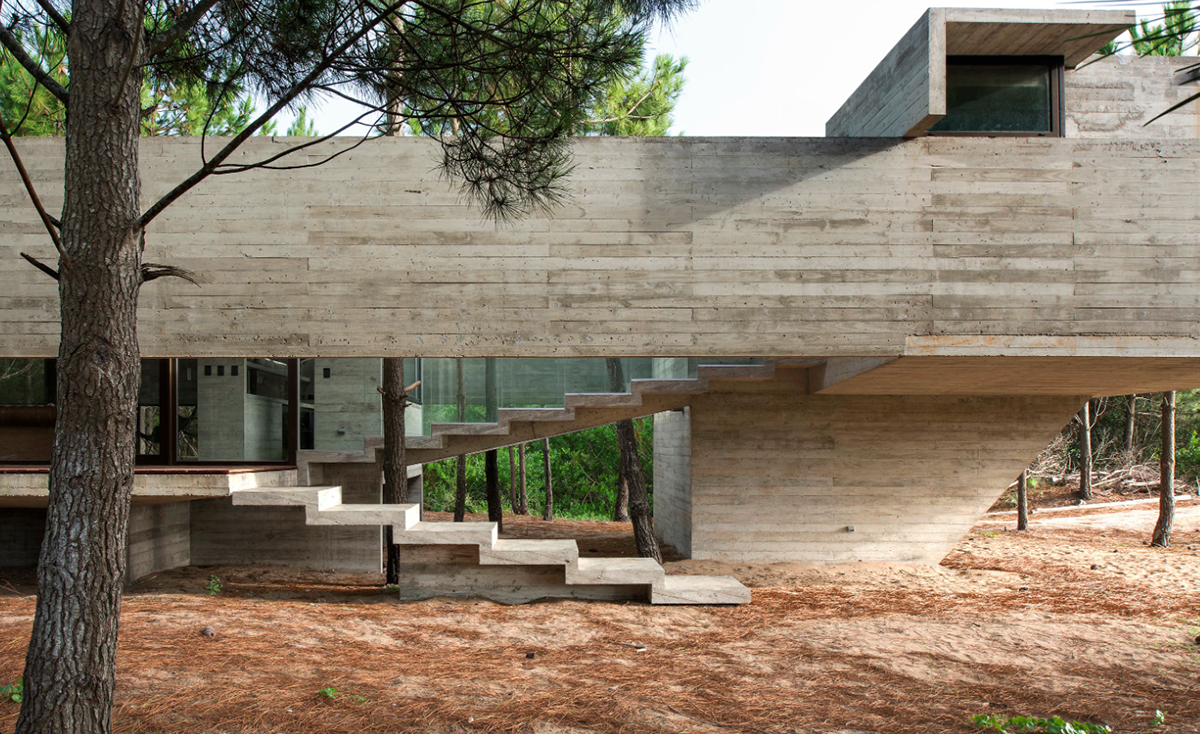 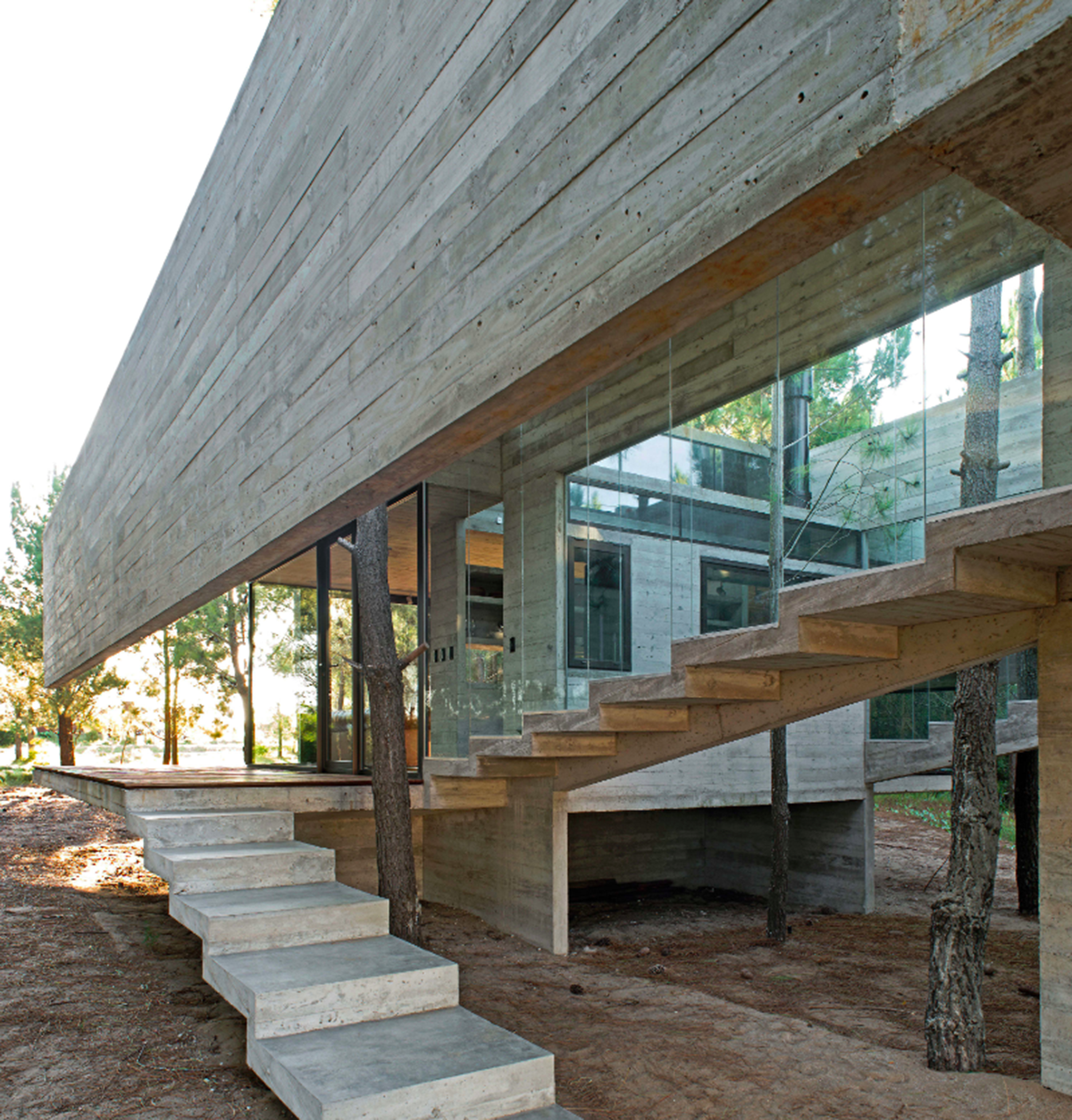 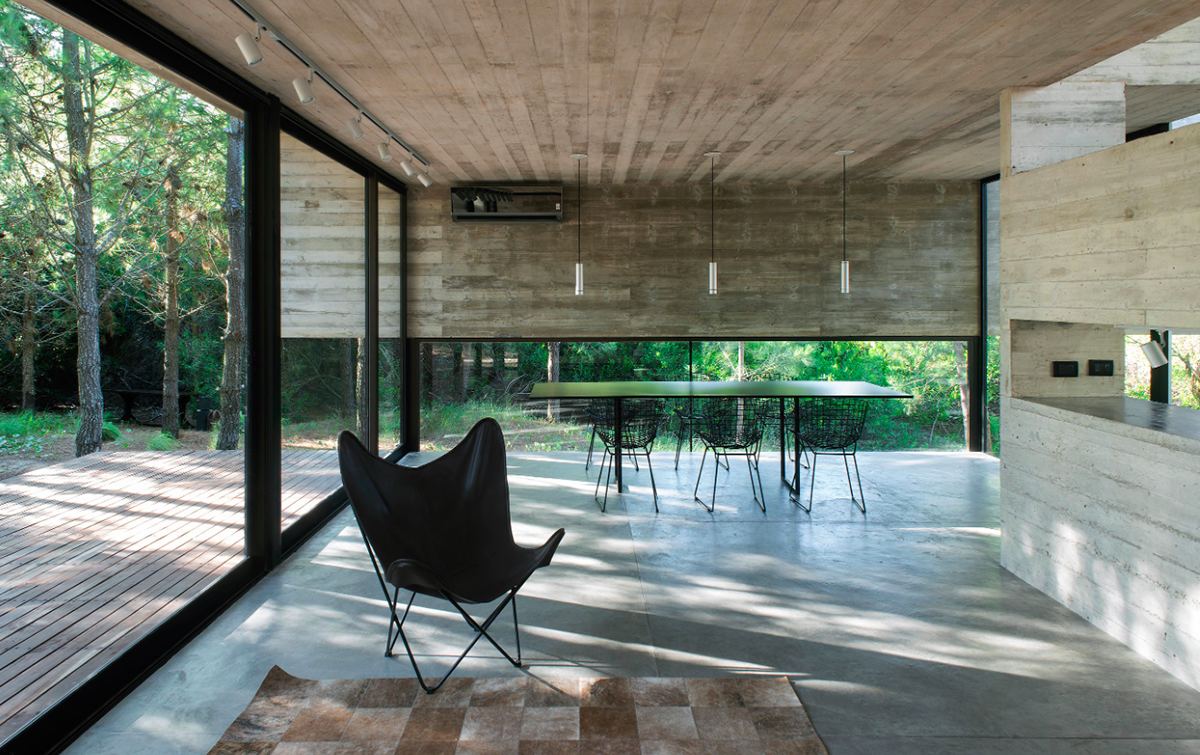 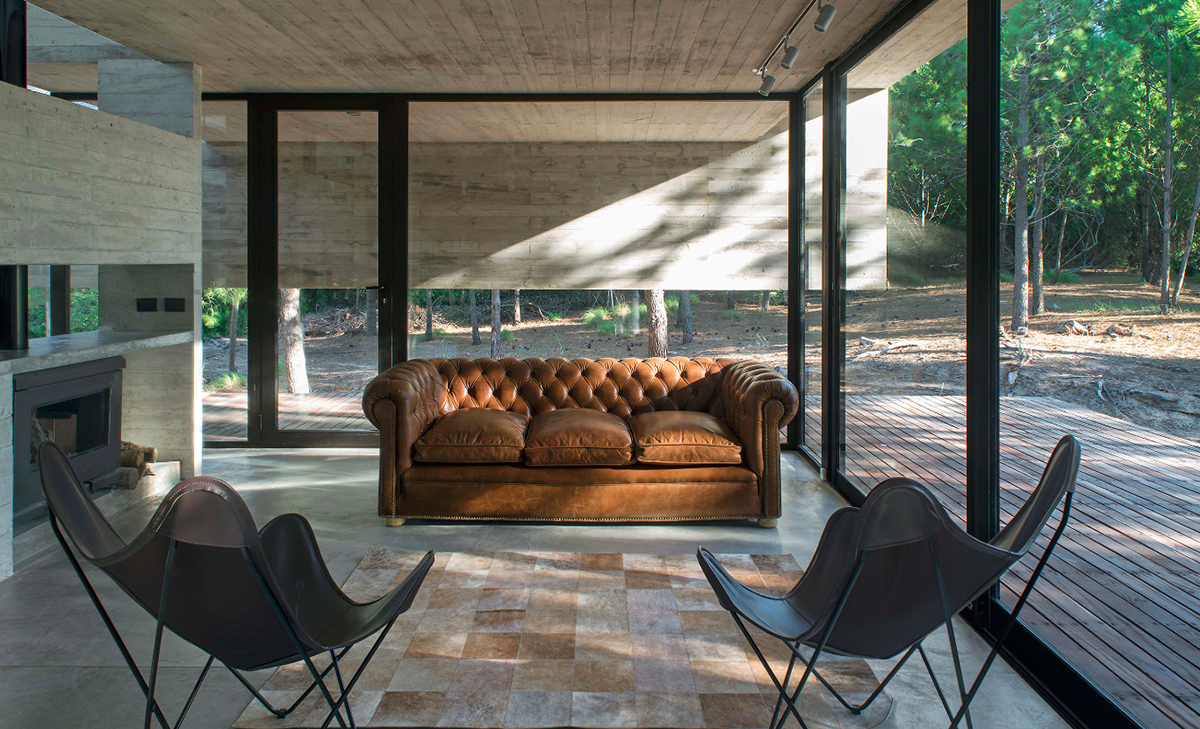 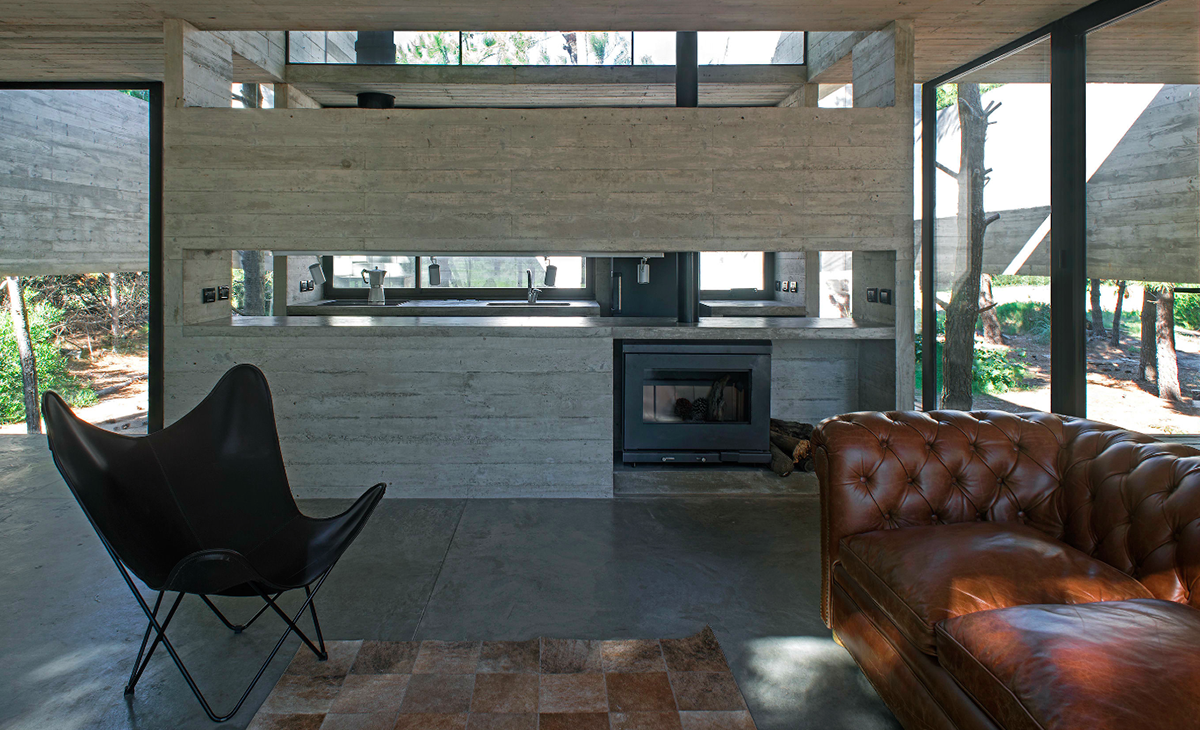 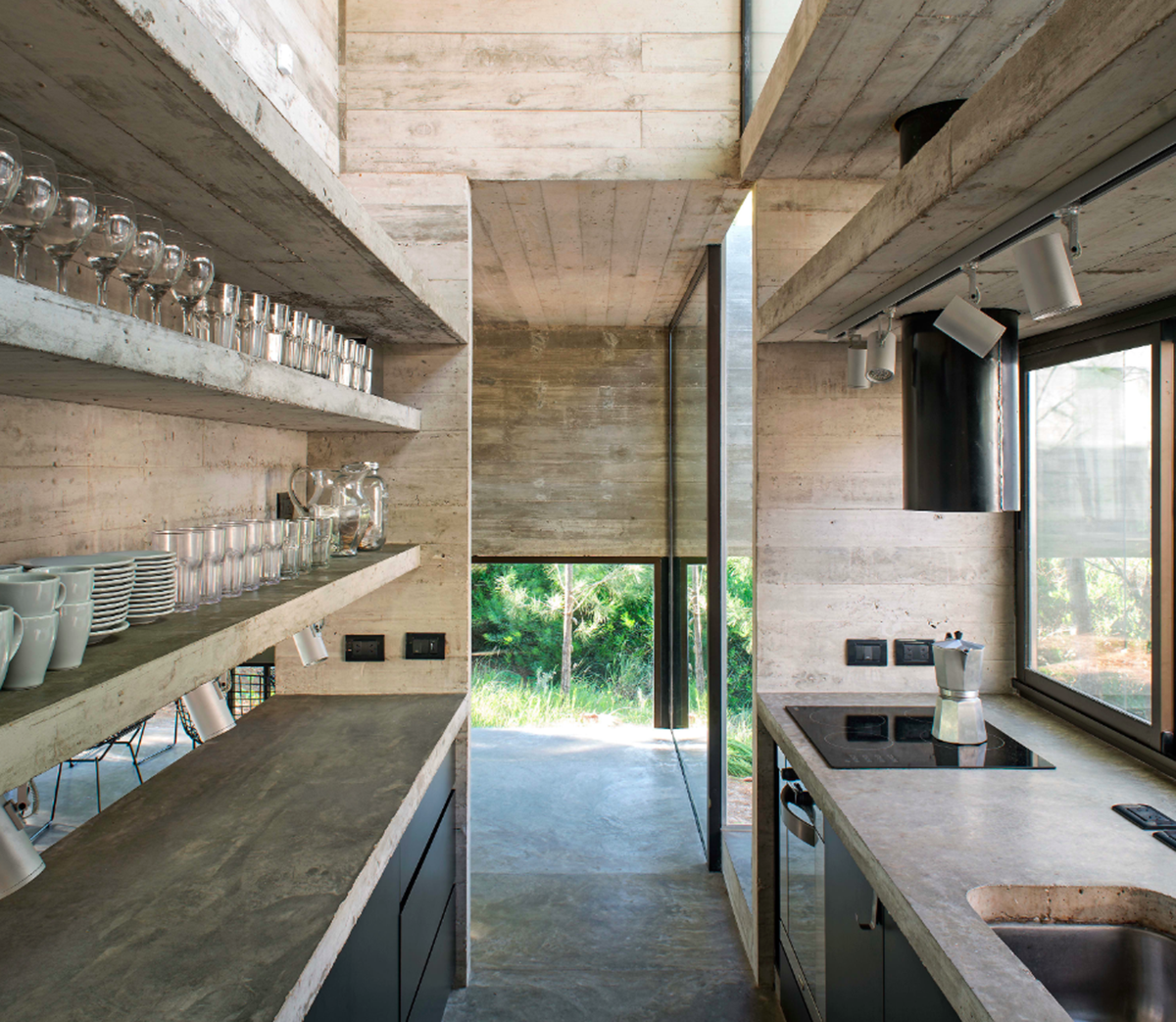 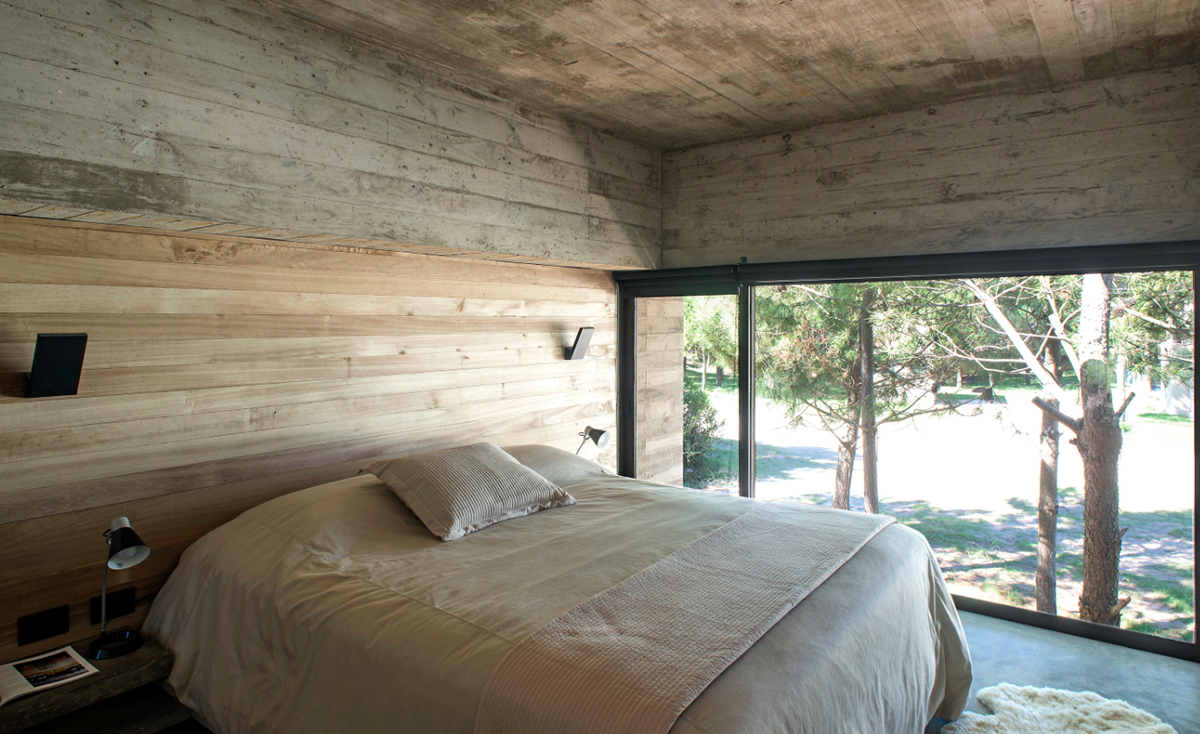 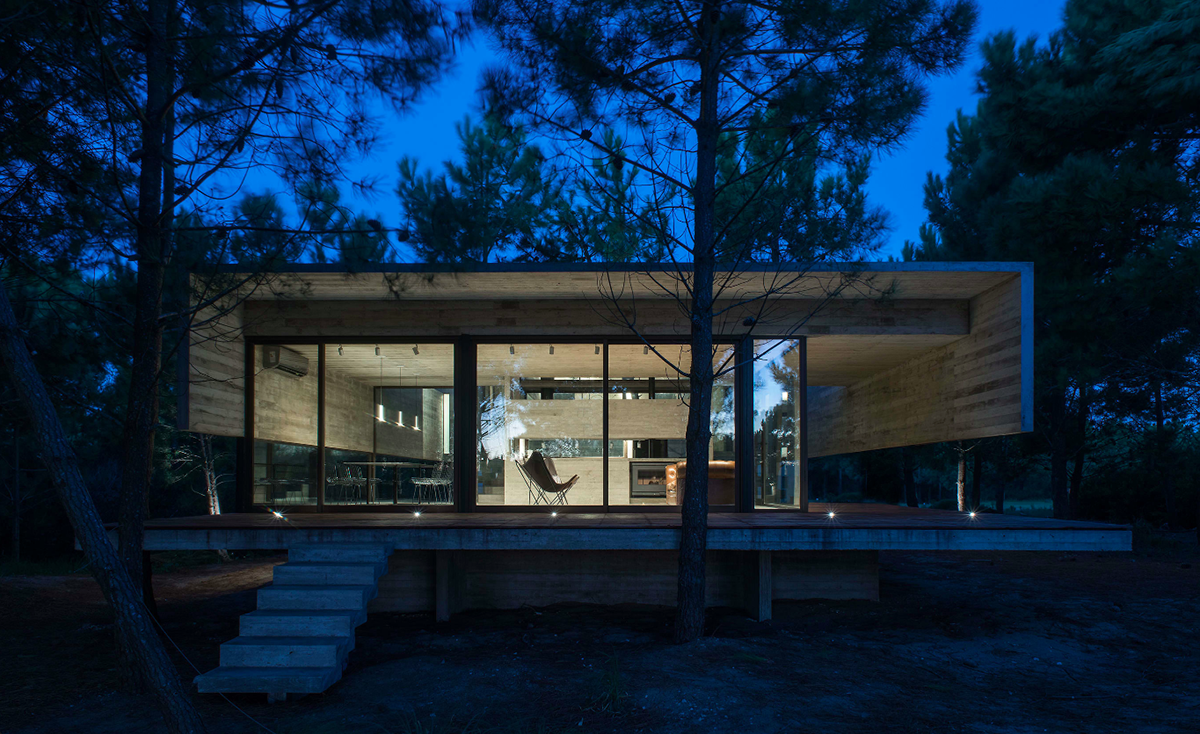 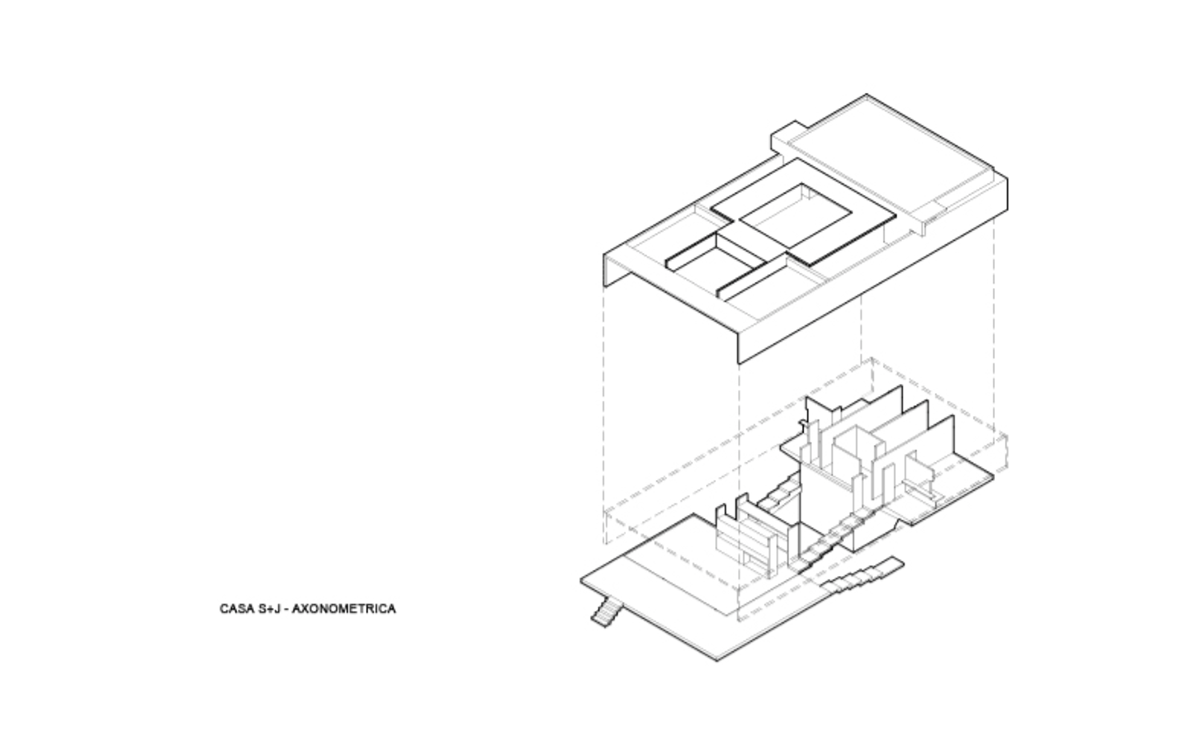 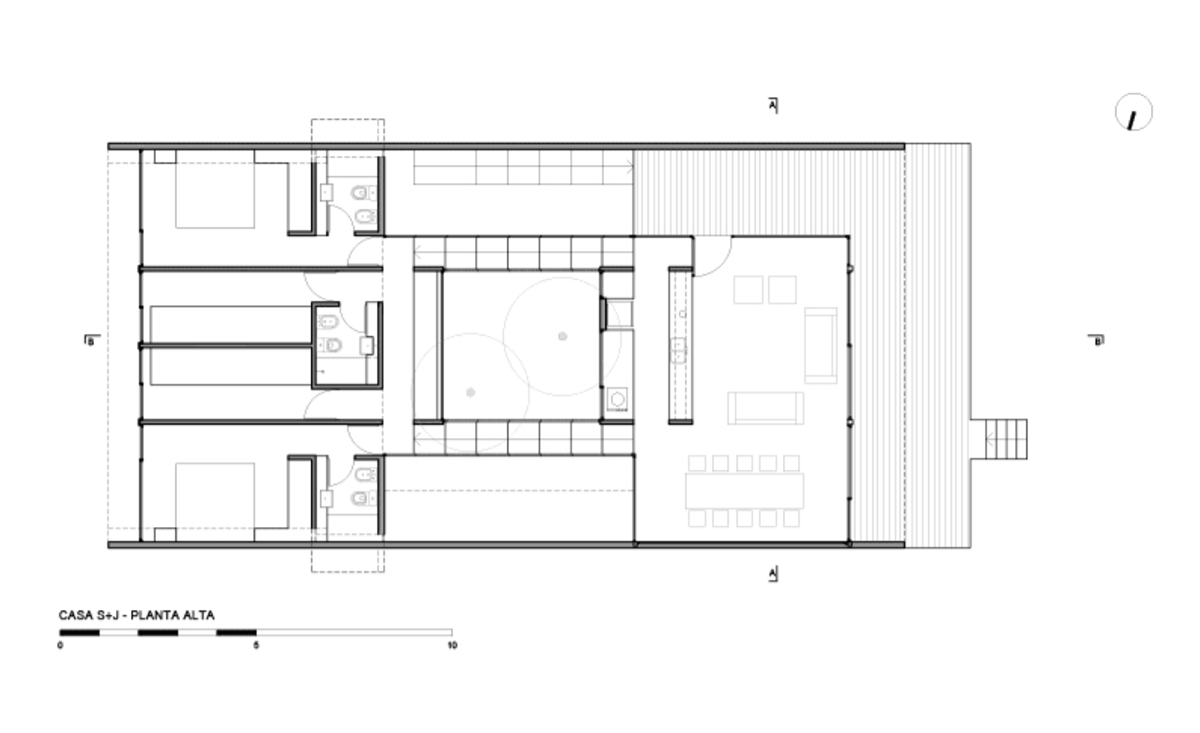