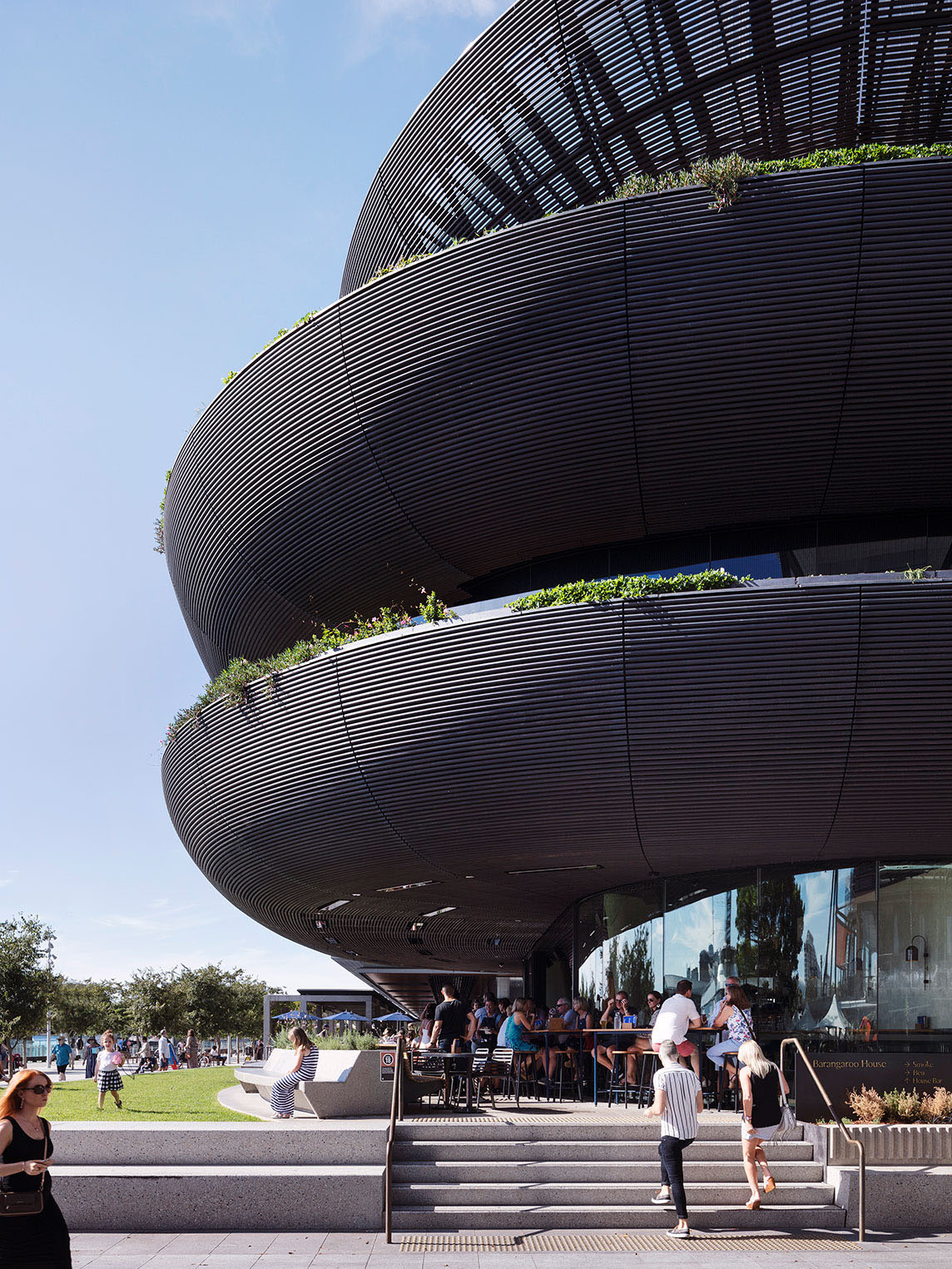 Sydney-based architecture firm Collins and Turner has completed a new restaurant and fine dining venue at the south west corner of the recently completed Barangaroo South precinct, where the masterplan was designed by lead architects Rogers Stirk Harbour and Partners, in conjunction with Lend Lease Design.

Named Barangaroo House, the free-standing three-story restaurant draws a dramatic appearance with its reverse plate-shaped slabs, creating free movement inside of them and providing alternative space for planting - which marks the building immediately at the corner of the street. 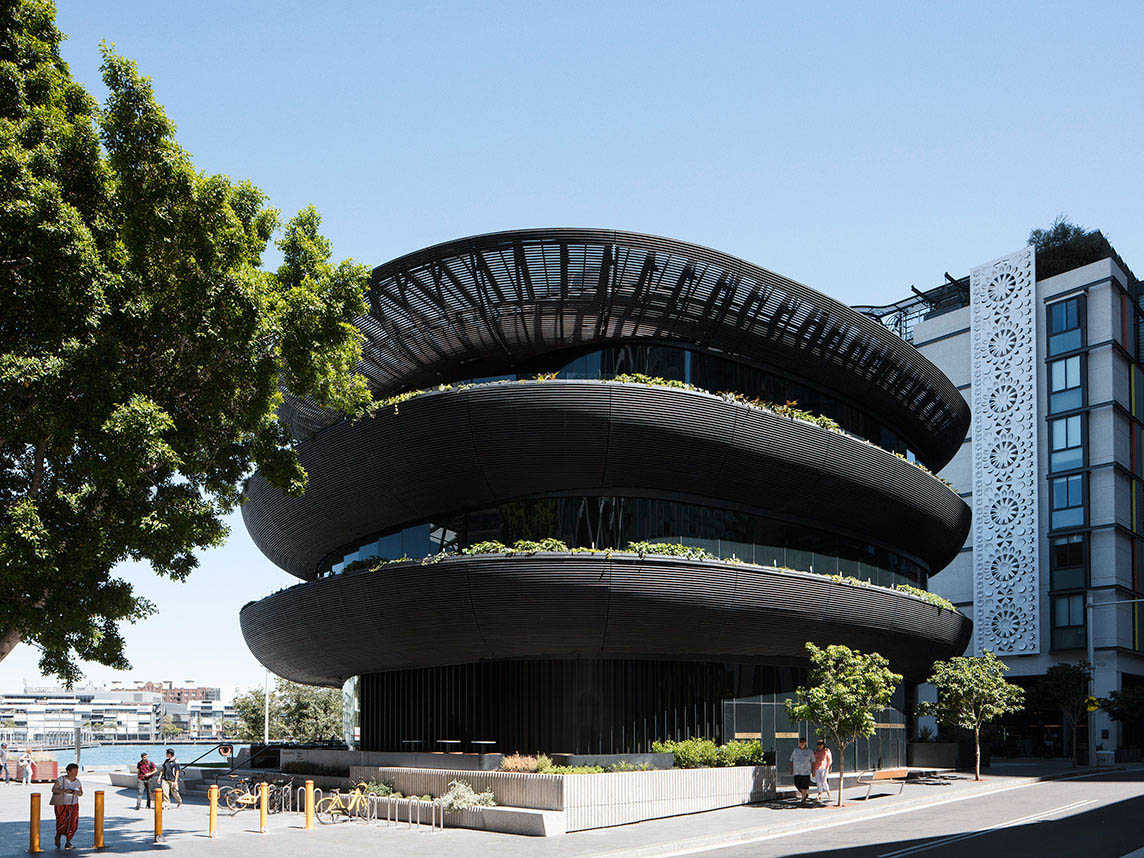 Built as a result of a design competition organised by Lendlease and the Barangaroo Delivery Authority, the competition brief called the creation of a new free-standing three story structure that meets the future needs of a major restaurant and bar venue. 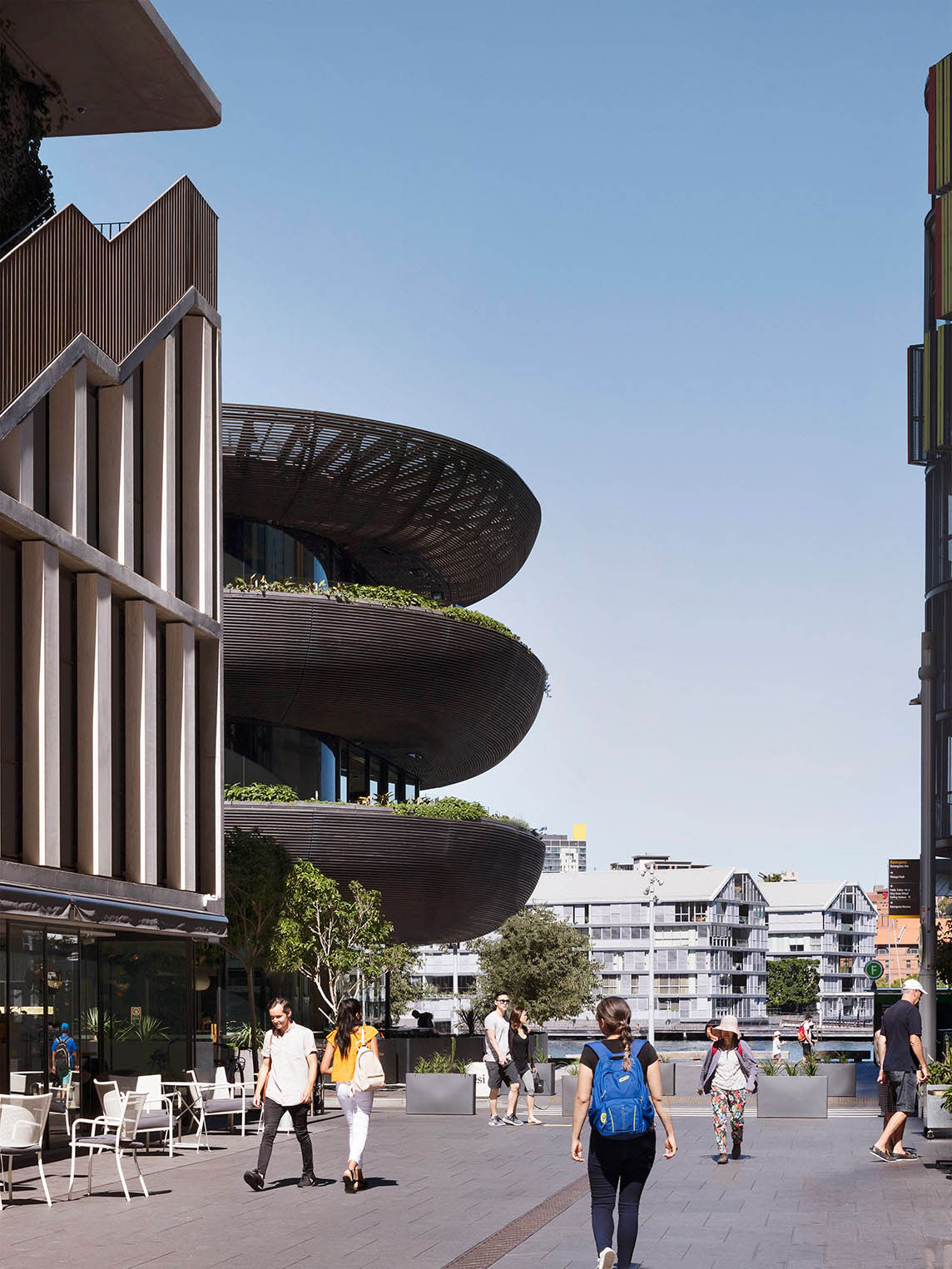 The three-storey building is situated in a 750-square-metre site, which is unique with its 4 street frontages - 3 pedestrian, and one vehicular. These limitations of the site resulted in a "rounded-form" building instead of creating four distinct facades, which also upscales the existing urban condition with free movement around it. 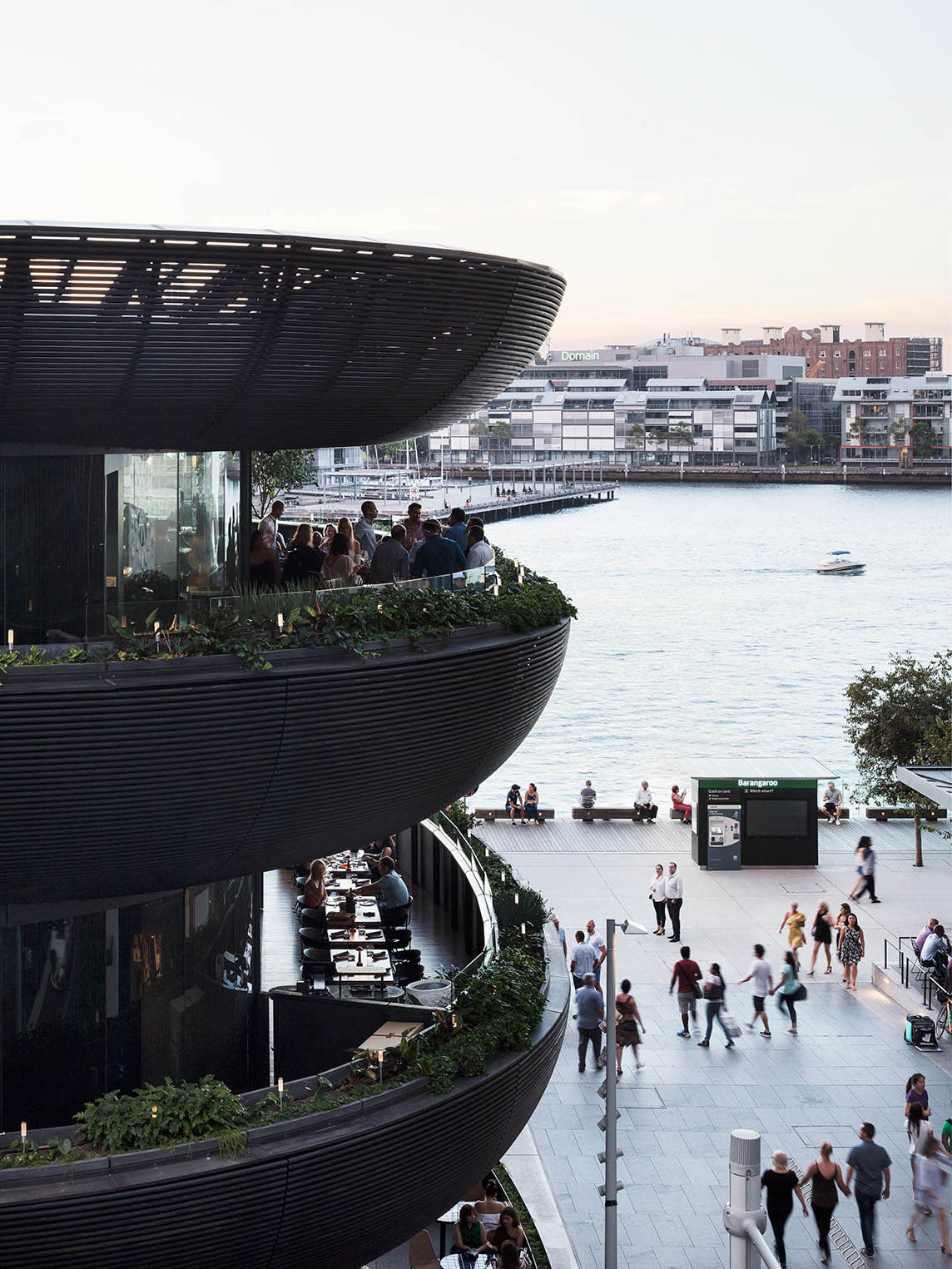 On the ground plan, the building is sit on a curved plan and raised above a transparent base, creating a dramatic contrast with upper floors in which they seem heavier compared to the ground floor. But, undoubtedly, this is the most welcoming part of the building as it creates free movement and circulation around the building across the street. 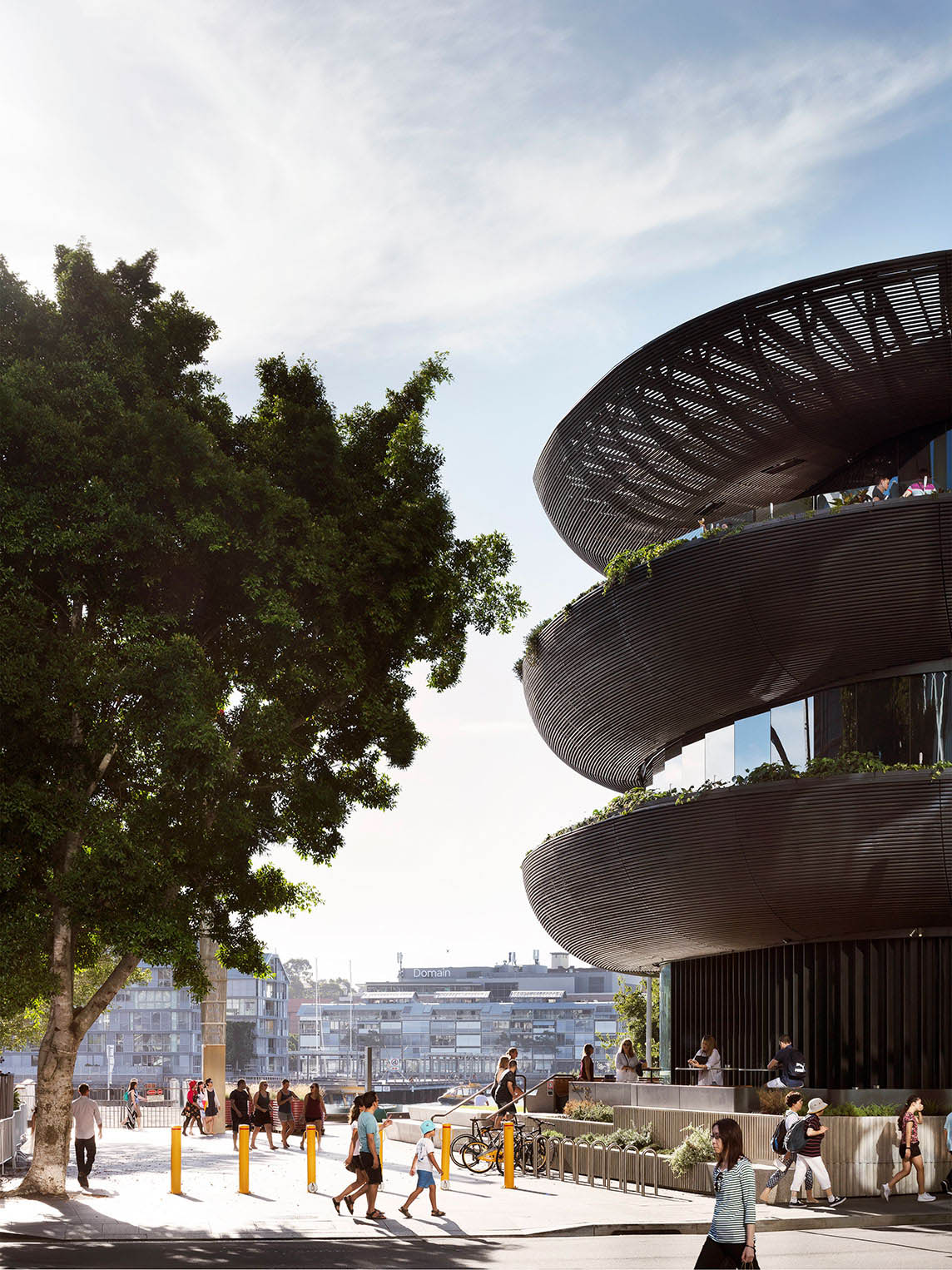 Over three levels, the building, internally supported by a pair of raking columns and with a post-tensioned concrete waffle slab where permits 13m spans, and 8.5m cantilevers, offers a variety of spaces for casual and fine dining with covered and open air dining at the pedestrian promenade level, raised terraces and a dramatic roof level terrace space.

Regarding materiality and construction process of the building, the architects stated that "following a rigorous process of analysis and logistics review, with Lend Lease, a series of design options for construction and materiality were researched in detail." 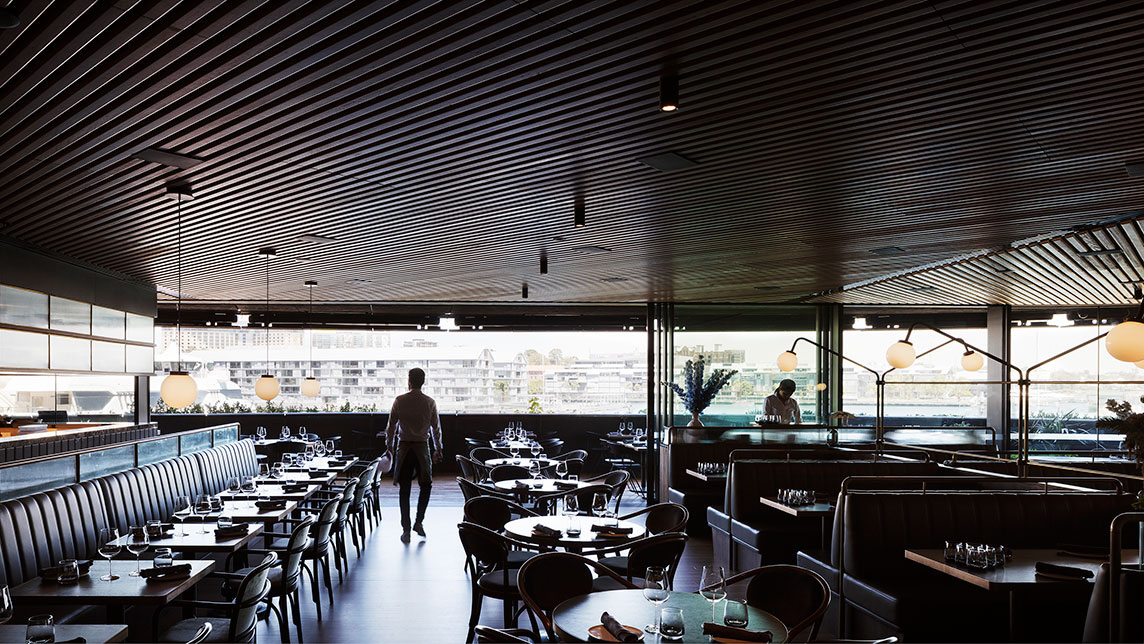 "The design provides a series of beautiful, flexible restaurant spaces, planned in and amongst planters and gardens in which grow native flowers, herbs, vegetables, and fruit which can be used in the restaurant. Planters are located at each level of the structure in the form of perimeter edge garden bed."

"The soft organic form of the building is clad in linear dowells of charred timber to create a striking organic facade, that provides a contrast to the neighbouring commercial high rise buildings," added the firm. 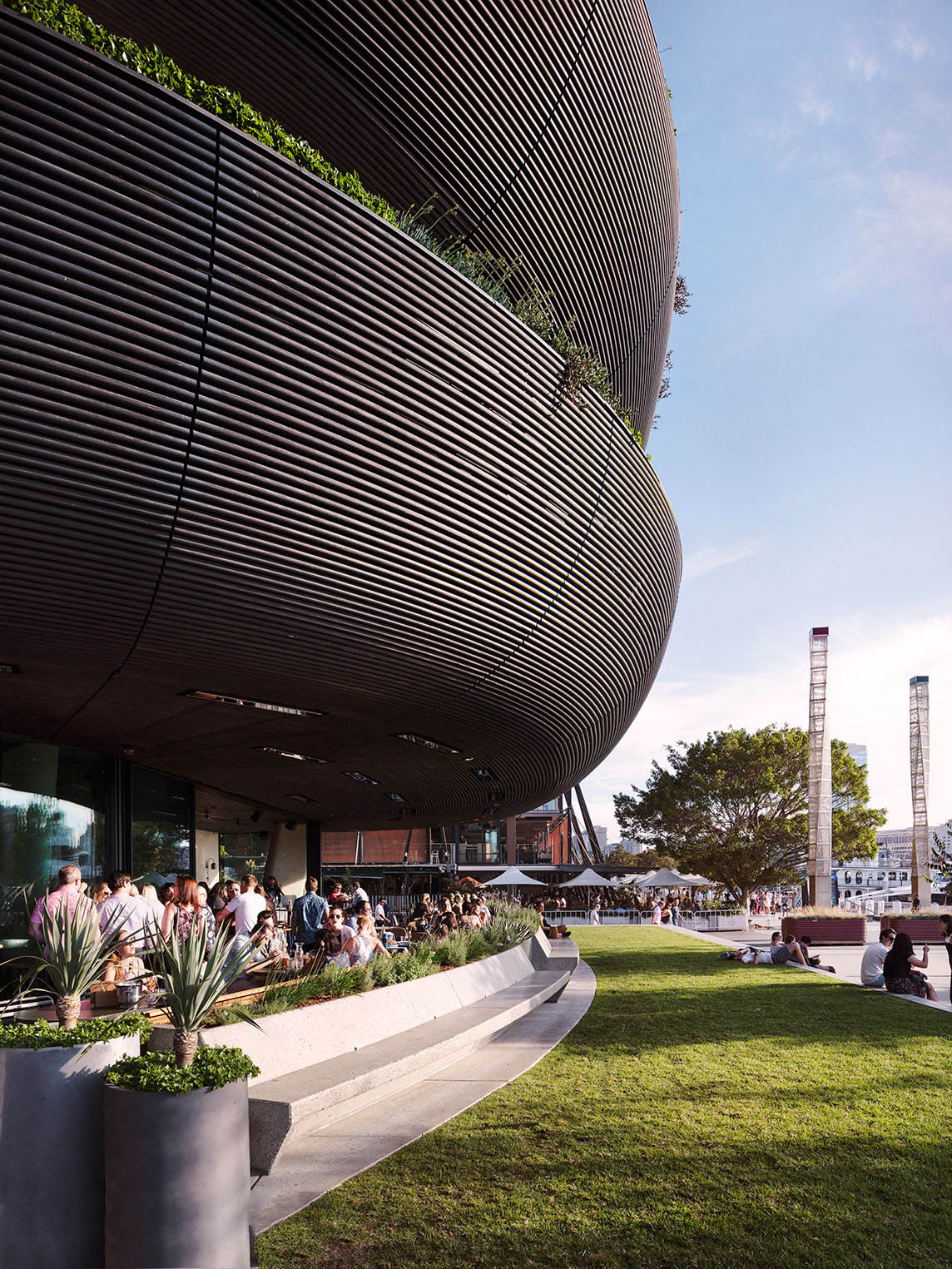 Externally, the building is differentiated by its bold, dark and sculptural 3D curving timber façade. Using a unique façade system on the building, concentric timber dowels are individually steam bent into shape, and charred to create a bold and dark appearance with low maintenance needs. This finishing technique also refers to the primeval act of burning wood, which is an essential part of the cooking process. 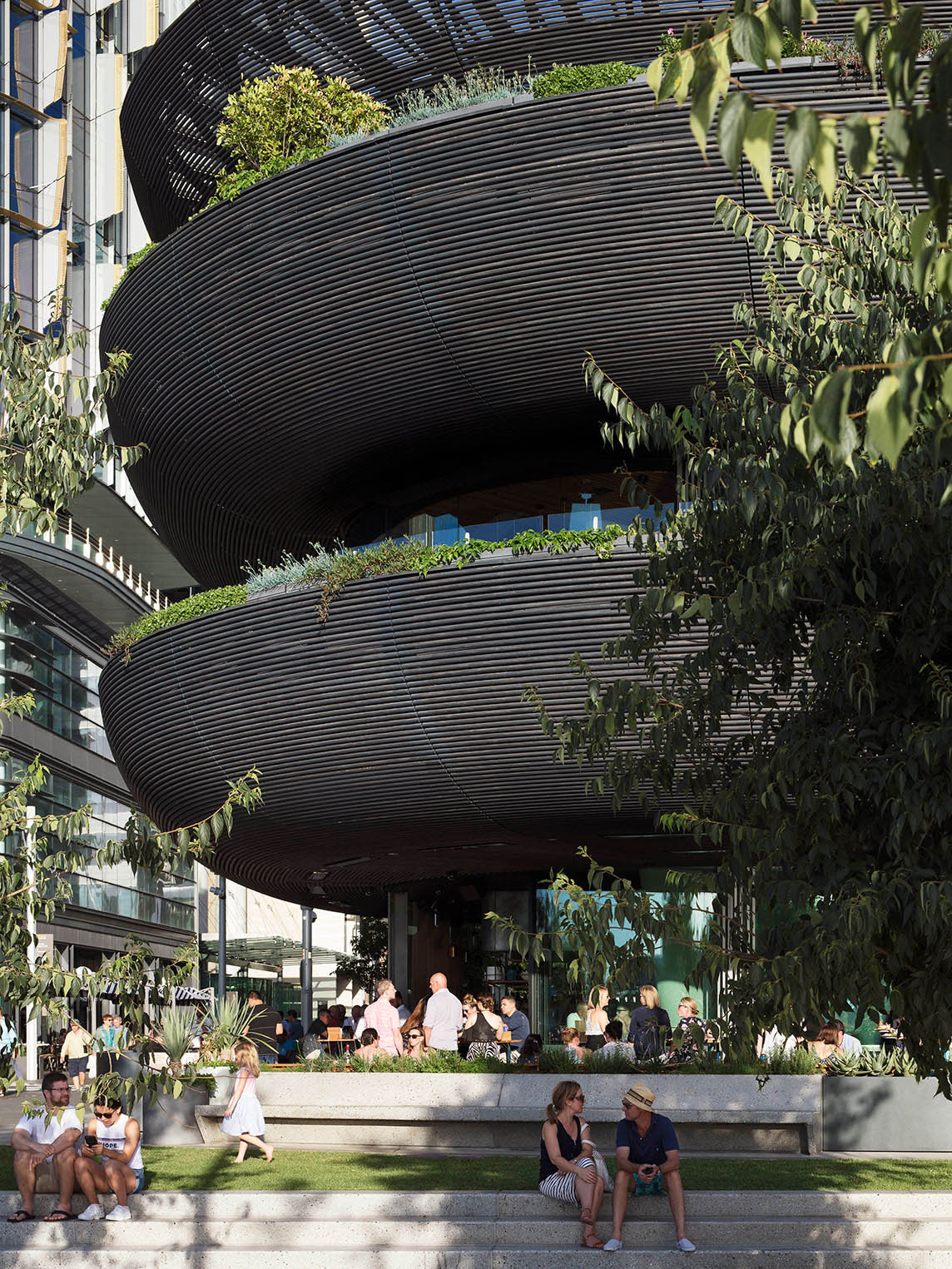 "From early design investigations, we sought to propose a building with a strong visual identity, which spoke of the nature of the program, as well as the uniqueness of the site. Leading hospitality group Solotel are the tenants of the building, with the building subdivided into three distinct venues - House Bar, Bea Restaurant, and Smoke bar," added the architects. 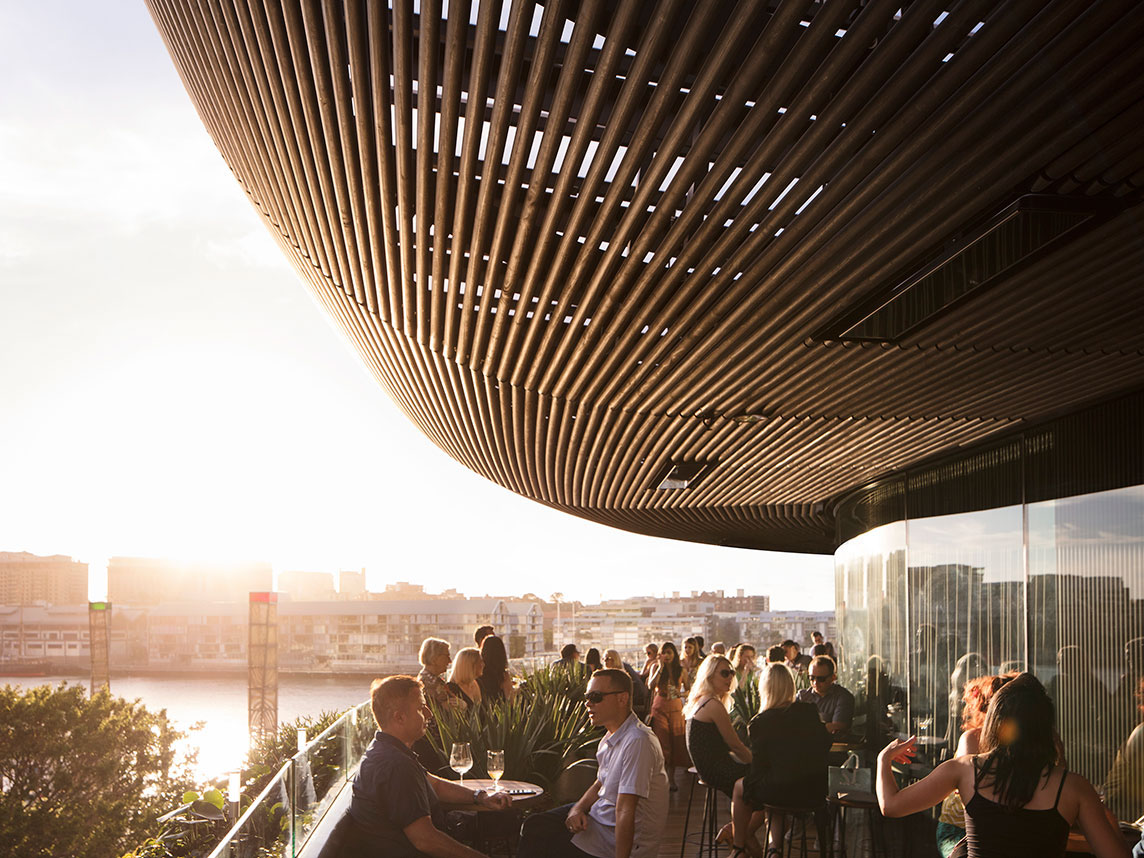 "The venue’s o erings are masterminded by Matt Moran, one of Australia’s most celebrated chefs acting as executive chef, with Chef Cory Campbell (ex Noma, Copenhagen and Vue du Monde, Melbourne) responsible for the menus at each level, which each focus on innovative cooking with the incorporation of Australian native produce."

"The ambition of the project is the creation a welcoming, timeless, convivial structure, that over time becomes a much loved part of the city," they explained. 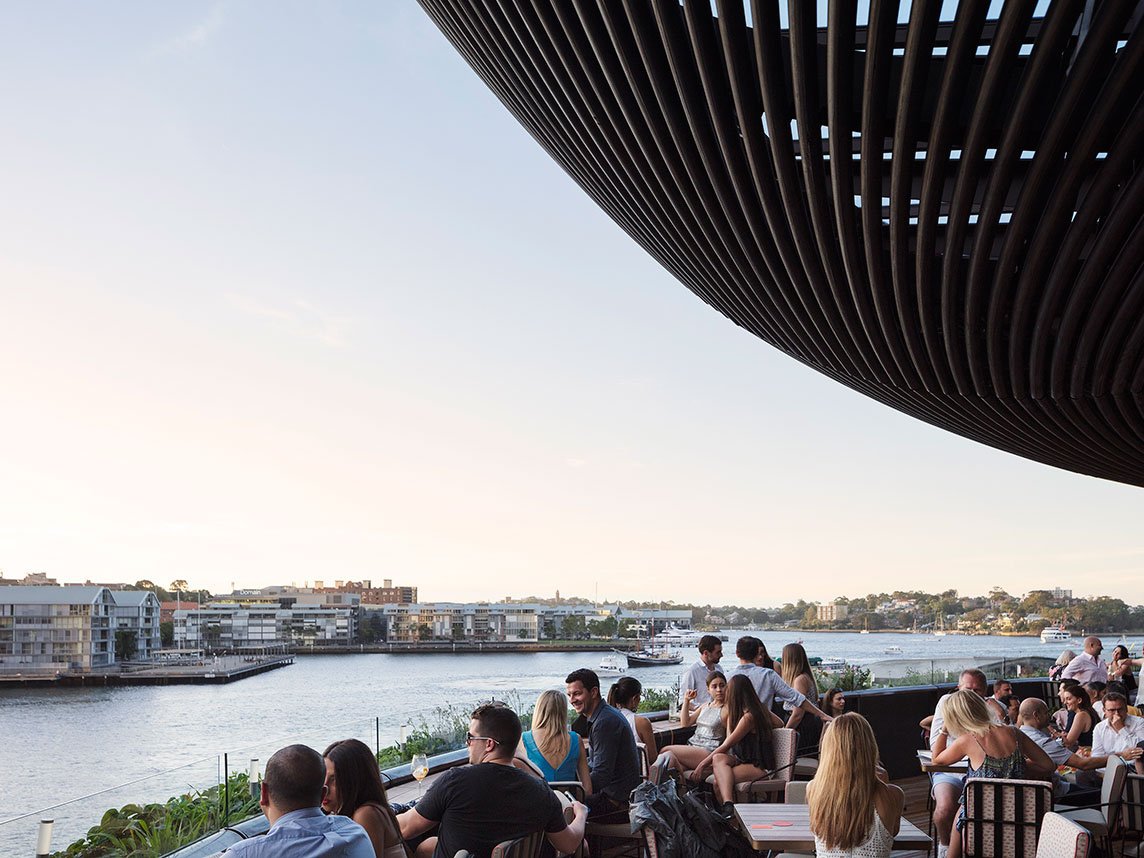 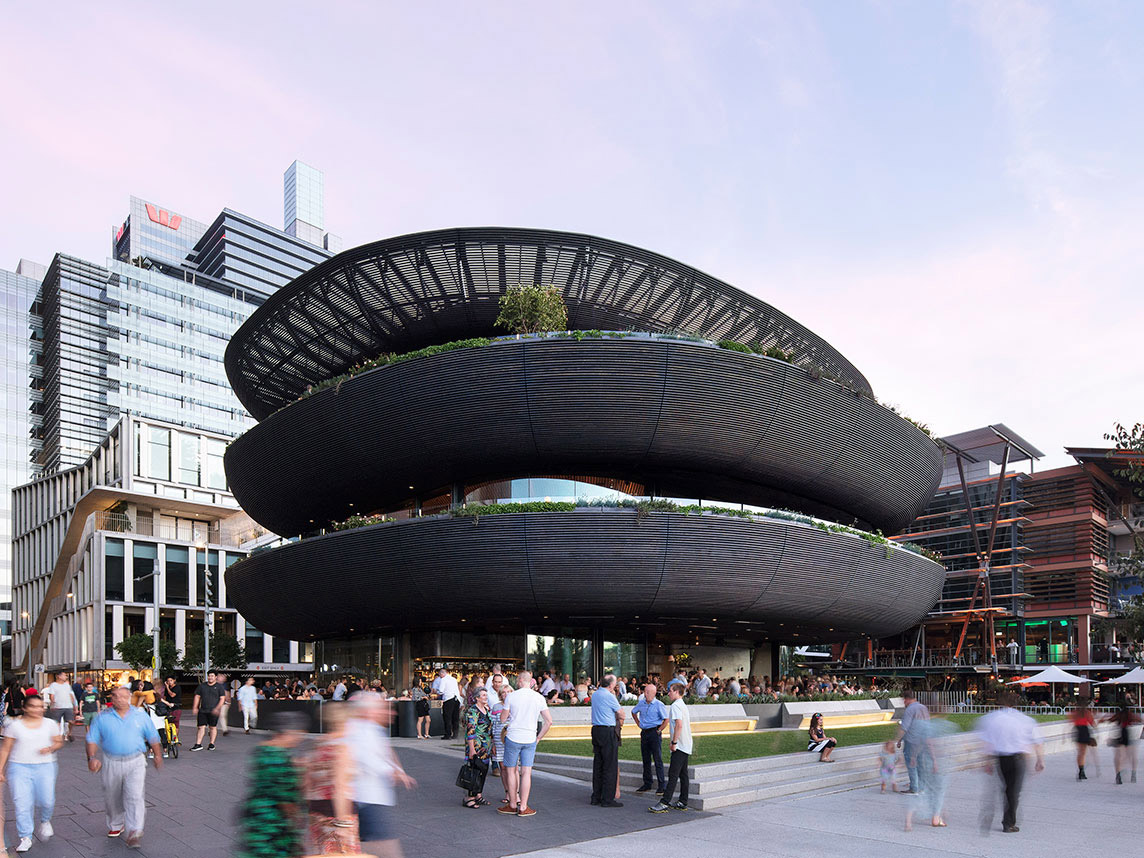 > via Collins and Turner