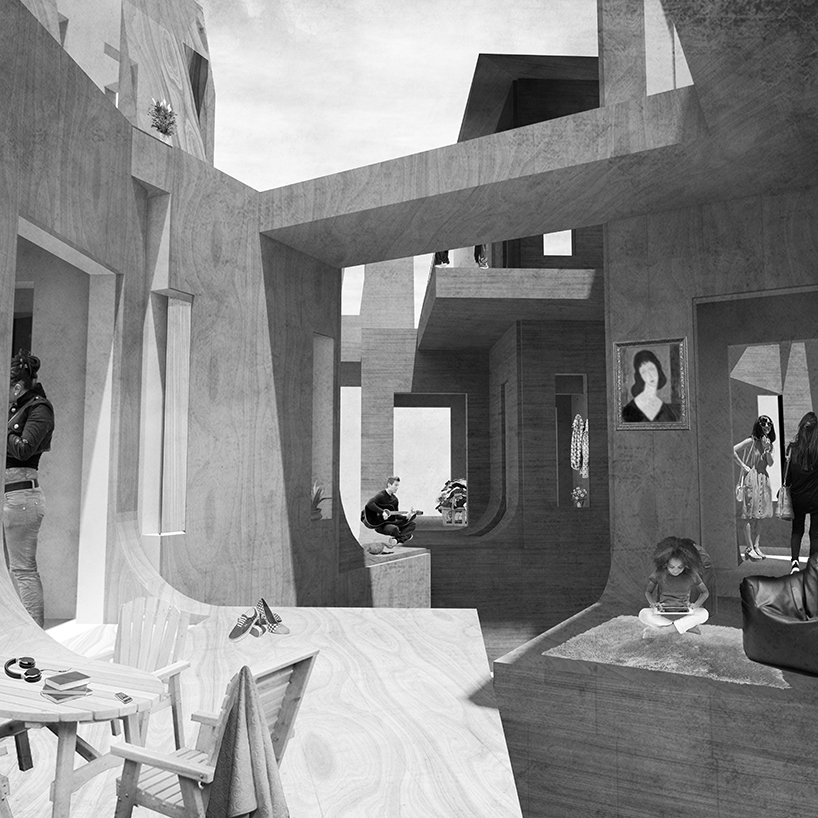 Residual Living is a new collective living unit, rejecting the individual units, developed by New York-based architect Rafael Berges as his MArch thesis at California College of the Arts. Residual Living is an urban housing proposal that rejects the individual unit as the basis for collective living and instead proposes the shared interstitial space between housing units as the generator of public life. The cracks formed between units redefine the threshold between the public and domestic realm.

Rafael Berges's design consists of a multipartite bearing walls that allow users to share daily habits, working spaces, flexible area in a common area. Through this collective huge spaces, the resident's personal belongings are embedded into bearing walls as fixed elements and they turn into a showcase with exotic appearance through brutalist demeanour. 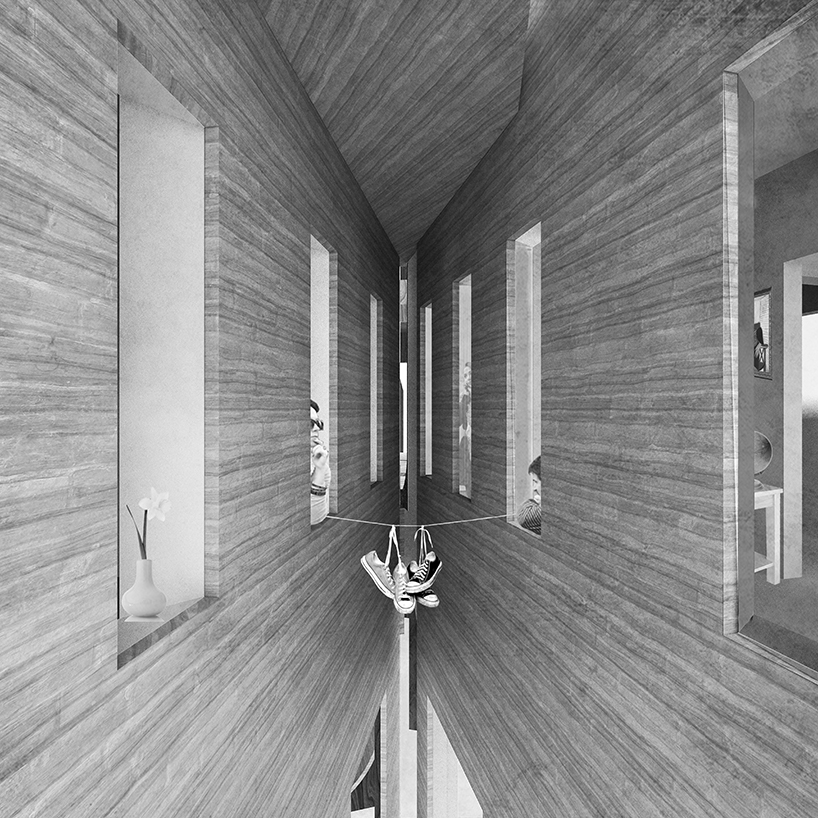 Housing is the threshold that defines our public and domestic lives and it is therefore the point where the public realm begins. If the aggregation of housing is re-shifted to provide ‘in-between’, or interstitial spaces between units then new types of public realms can be created. If one’s conception of public is smaller, then one has more agency over that public space and it therefore becomes domesticated. 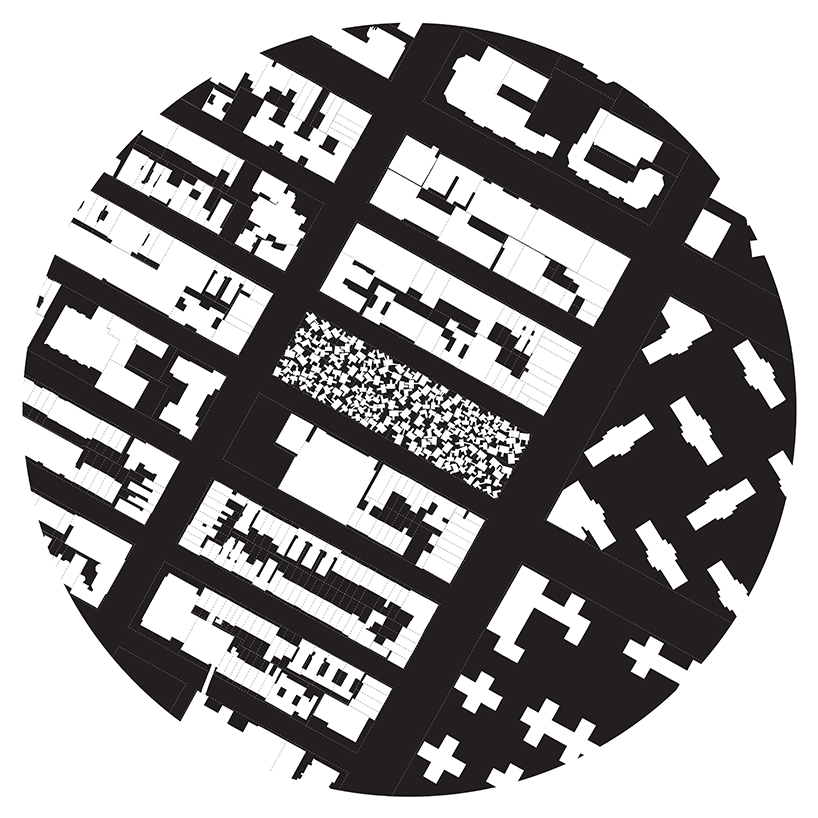 New York City is the quintessential embodiment of modern conceptions of collectivity and densification. Over the course of the 19th and 20th centuries the evolution of New York City Housing emphasized the aggregation of housing units to maximize lot coverage, access to light & air, and proper egress.

This approach resulted in highly individualized housing units existing as separate entities that do not relate to one another except through shared corridors and party walls.

volume varieties in the section

The site is a Manhattan city block that sits between old law tenements and towers in the park typologies, naturally evoking an in-between condition. Each lot is filled with the same sized unit and is arranged to cover the same lot area. 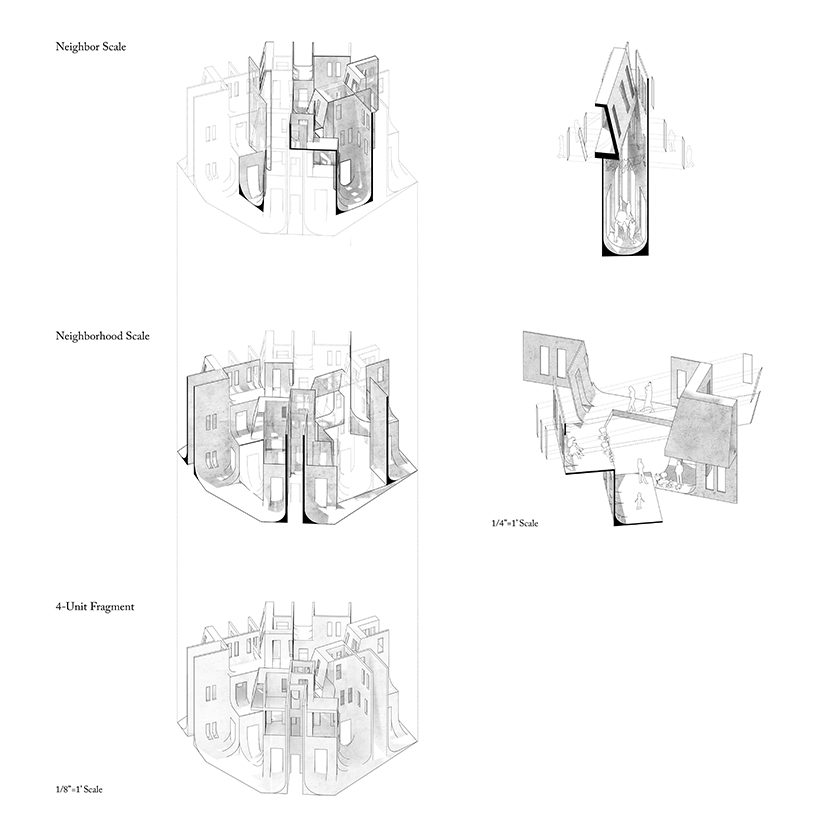 These volumes of space fall into two main categories: the neighborhood scale and the neighbor scale. The neighbor scale is where the units are most densely packed to create close proximities between units where more intimate interactions can occur between two units.

The neighborhood scale is where 3 or more units are loosely packed to create larger volumes of space with visual continuity across them. Balconies become an extension of the domestic space held within each unit and walkways connect units across larger spaces. 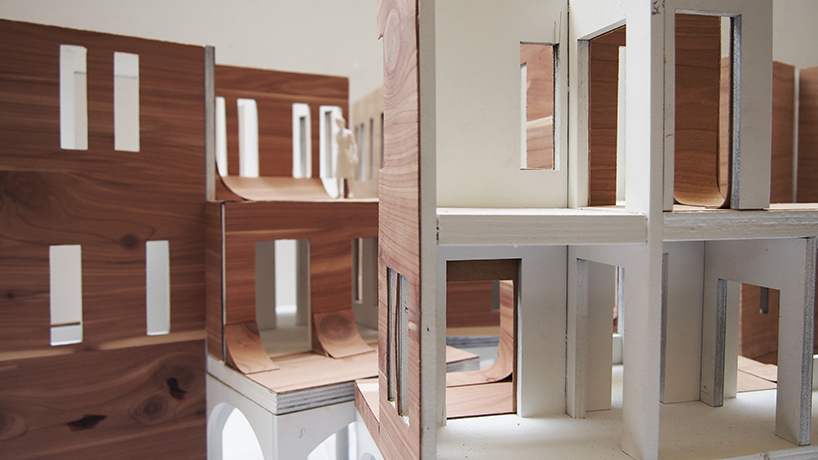 The result is urban multi-family housing that enriches human plurality by blurring the boundaries between public and domestic space in order to allow the human condition to flow more seamlessly between the two realms. 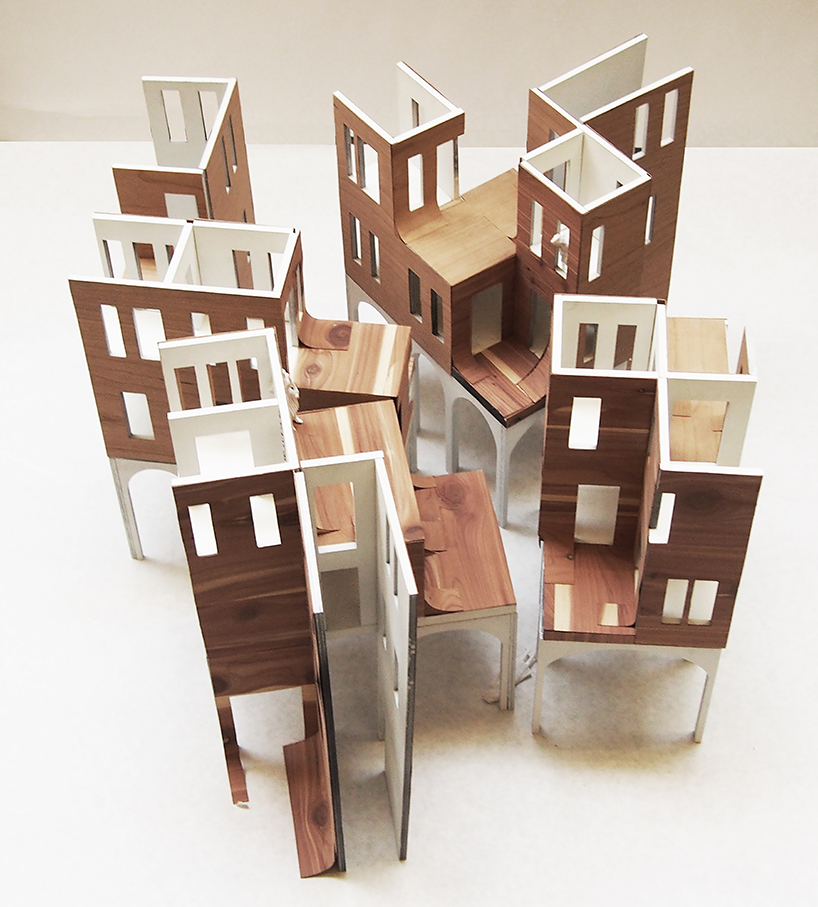 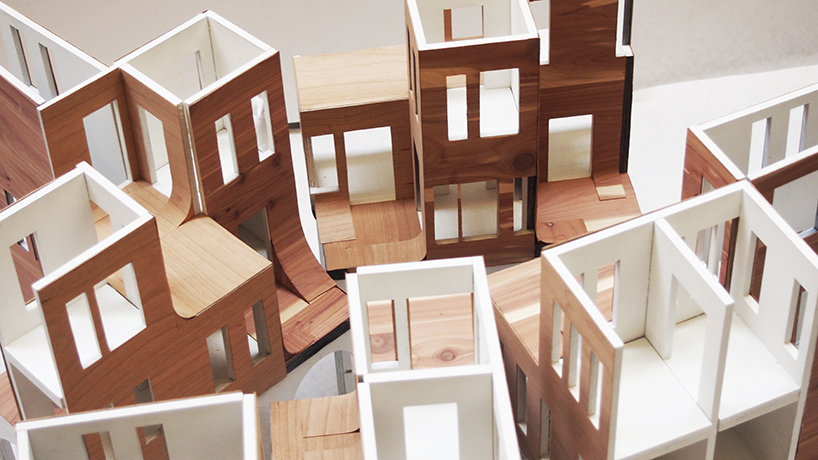 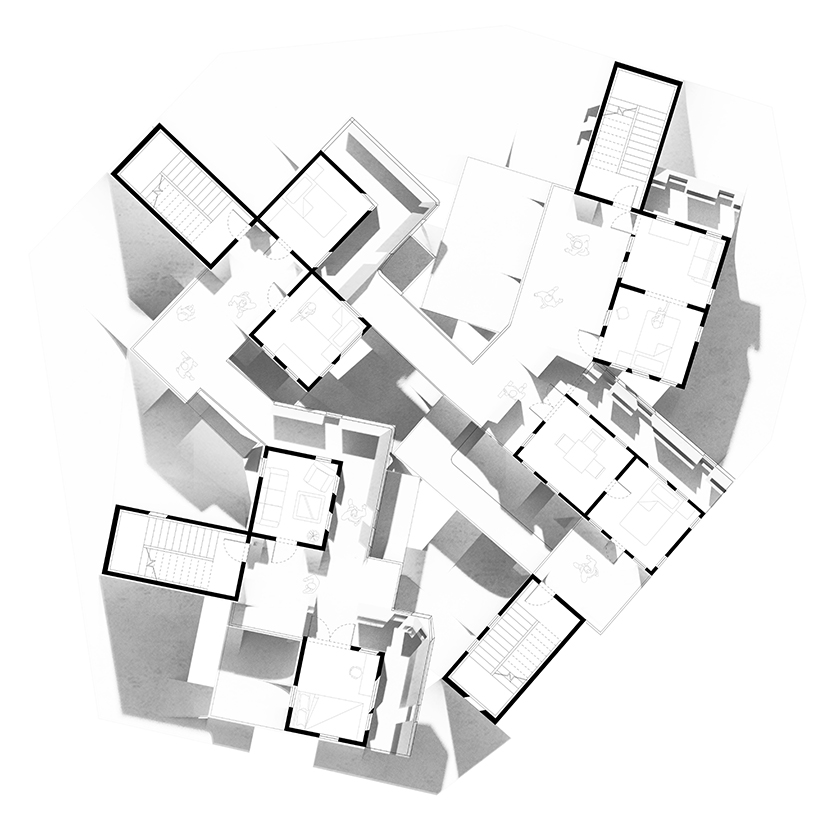 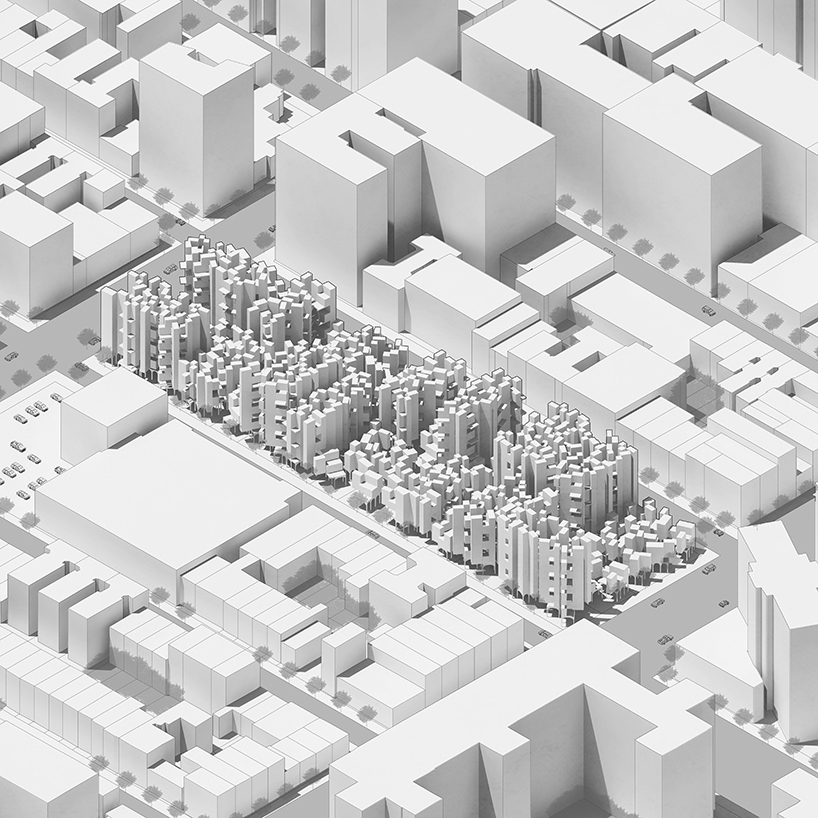 Residual Living as a whole in Manhattan's urban setting