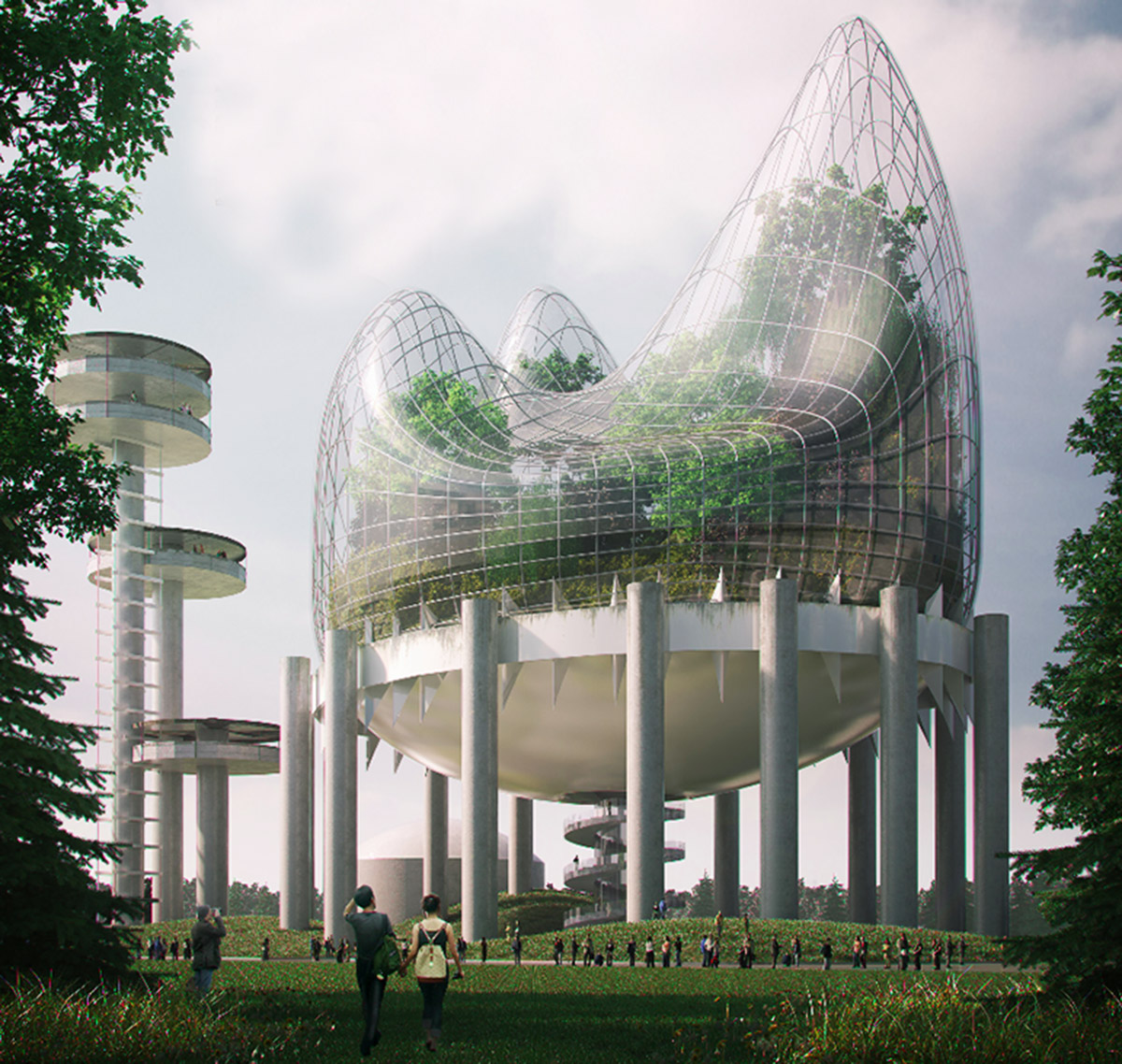 The National Trust for Historic Preservation and People for the Pavilion has announced the winners of the New York State Pavilion Ideas Competition. Along with the announcement, the National Trust and People for the Pavilion will host a companion exhibition at the Queens Museum from August 5–28 where visitors can view the top entries from around the world and learn more about the history of the iconic World’s Fair structure.

''It is often said that the New York State Pavilion is Queens’ calling card to the world, and the enthusiasm and creativity that this ideas competition inspired is certainly indicative of the strong feelings people have about this place,” said Stephanie K. Meeks, president and CEO of the National Trust for Historic Preservation. ''As it did in its heyday, this structure lights up people’s imaginations and encourages us all to dream big. We are thrilled with the wide array of ideas that we received, and look forward to how they may inspire the future of this iconic site and ensure it can be enjoyed for years to come.''

''These winning submissions represent just a few of the infinite possible futures of the New York State Pavilion,'' said Salmaan Khan, co-founder of People for the Pavilion. ''We hope these creative and exciting ideas will spark further dialogue about how this historic structure can serve the communities of Queens. Under the leadership of Queens Borough President Melinda Katz, we look forward to seeing the Pavilion brought back to life.''

Sponsored by Queens Borough President Melinda Katz, a longtime advocate for the Pavilion’s restoration, the ideas competition asked the public for creative ideas to re-imagine this forgotten star of the 1964-65 World’s Fair. The “anything goes” approach to submissions for the New York State Pavilion Ideas Competition brought in everything from sustainable farmers’ markets to an innovative digital agora.

The first, second, and third place winners of the design competition were determined by a jury of design, architectural, and community planning experts. Additionally, a “Queens Winner” was selected by competition organizers to highlight the outpouring of local support the initiative received.

Noted architecture critic and Vanity Fair Contributing Editor, Paul Goldberger, who served as one of the ideas competition judges, said, “The New York State Pavilion is more than half a century old, but Philip Johnson’s iconic structure in the center of Queens is still the ‘Tent of Tomorrow’ to those who know it.” Goldberger added, “The outpouring of new ideas for its re-use not only shows how beloved this structure is, it gives me confidence that this great building can have a future that will be as meaningful as its past.”

Eight on-the-ground events were held in neighborhoods throughout Queens in conjunction with the competition to garner local support for the project. At these events, residents connected with artists and designers to have their vision come to fruition as an official submission to the competition.

Queens Borough President Melinda Katz, the competition sponsor, said, ''Hundreds of submissions were received from across the city, country, and around the world. There were some remarkable responses to our international open call for the best and boldest ideas to re-imagine the Pavilion.” Katz added, ''It is truly incredible what the imagination and a healthy dose of competition can engender, and the panel of judges certainly had an unenviable job. We thank everyone for participating in this fun, interactive campaign, part of the overall efforts to restore this National Treasure into a visible icon befitting the ‘World’s Borough' for generations of families and visitors to enjoy.''

The top three winning entries and Queens Winner are as follows: A repurposed Pavilion would serve as the base to a suspended natural environment with its design nodding towards the future. “Hanging Meadows” would feature plants from the Northeastern U.S. and provide visitors with a beautiful view of the city while standing amidst nature. A planetarium and classroom space would be found below the garden. 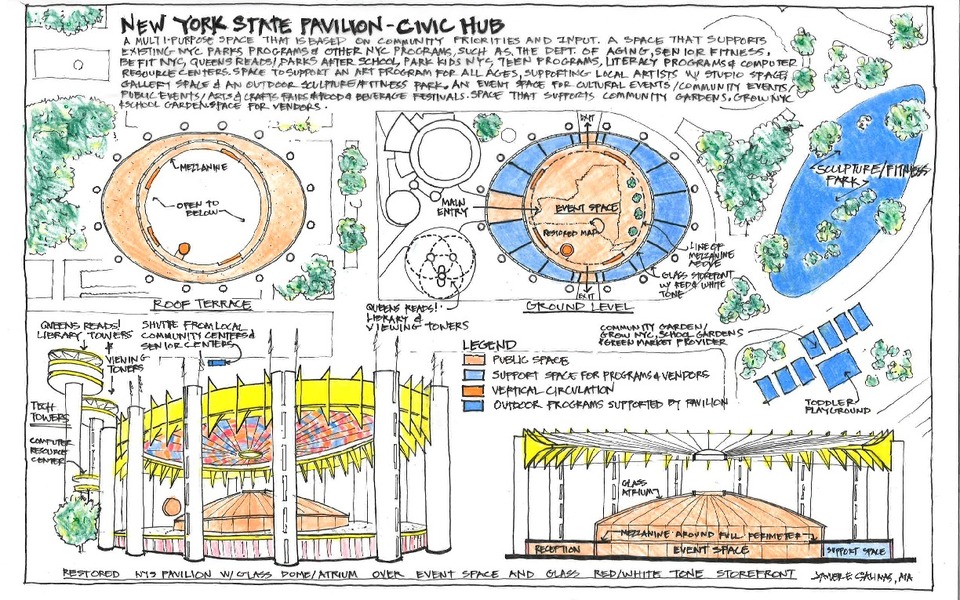 Focusing on the community’s priorities and input, this multi-purpose space would work in conjunction with public programming. Shuttles from local community and senior centers would be sure to include everyone on the various local events and festivals that would be hosted in the open event space.

3rd prize: “Pavilion for the Community” by Rishi Kejrewal and Shaurya Sharma 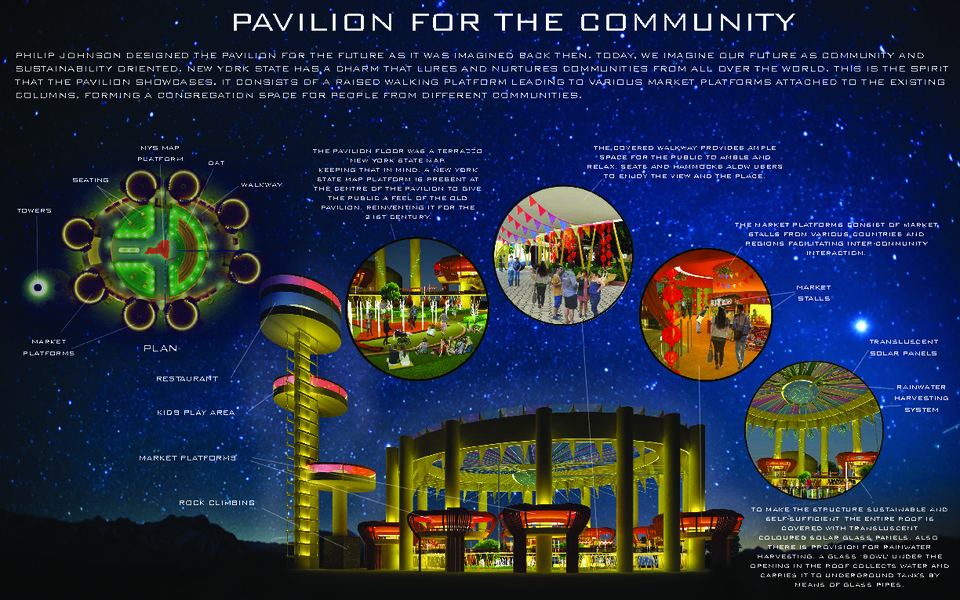 This plan would transform the Pavilion into a cultural marketplace working towards harmony through human interaction and sustainability. Features such as a communal children’s play area and solar panels pave the way towards a brighter future for the coming generations. 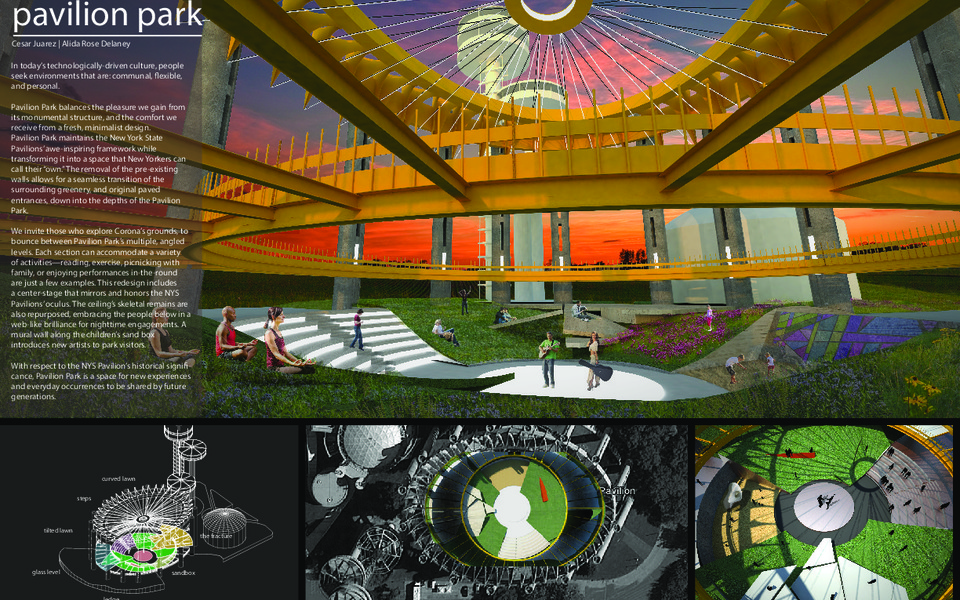 Submitted by Queens residents, the “Pavilion Park” would seek to honor the historical significance of the space and convert the vacant Pavilion into a public park. With a focus on the integrity of the original structure, the flexible communal space would be centered around a stage with built-in stadium seating.

Pavilion Futures: The New York State Pavilion Ideas Competition Exhibition will run from August 5-28 at the Queens Museum. The exhibition will feature the incredible and wide-ranging ideas for the Pavilion, the winning submissions, and some highlights from the competition’s on-the-ground events and programming in Queens from the past several months.