Herzog & de Meuron's Feltrinelli Porta Volta is located in a very important strategic point in which its traces go back to -the Mura Spagnole- the ancient 16th century city walls and a series of these fortifications have defined the city's growing boundaries. After the opening of the bastion in the late 19th century, Via Alessandro Volta laid the basis for the city’s extension outside the ancient walls, connecting as a new, prominent urban axis the historical centre with Cimitero Monumentale. 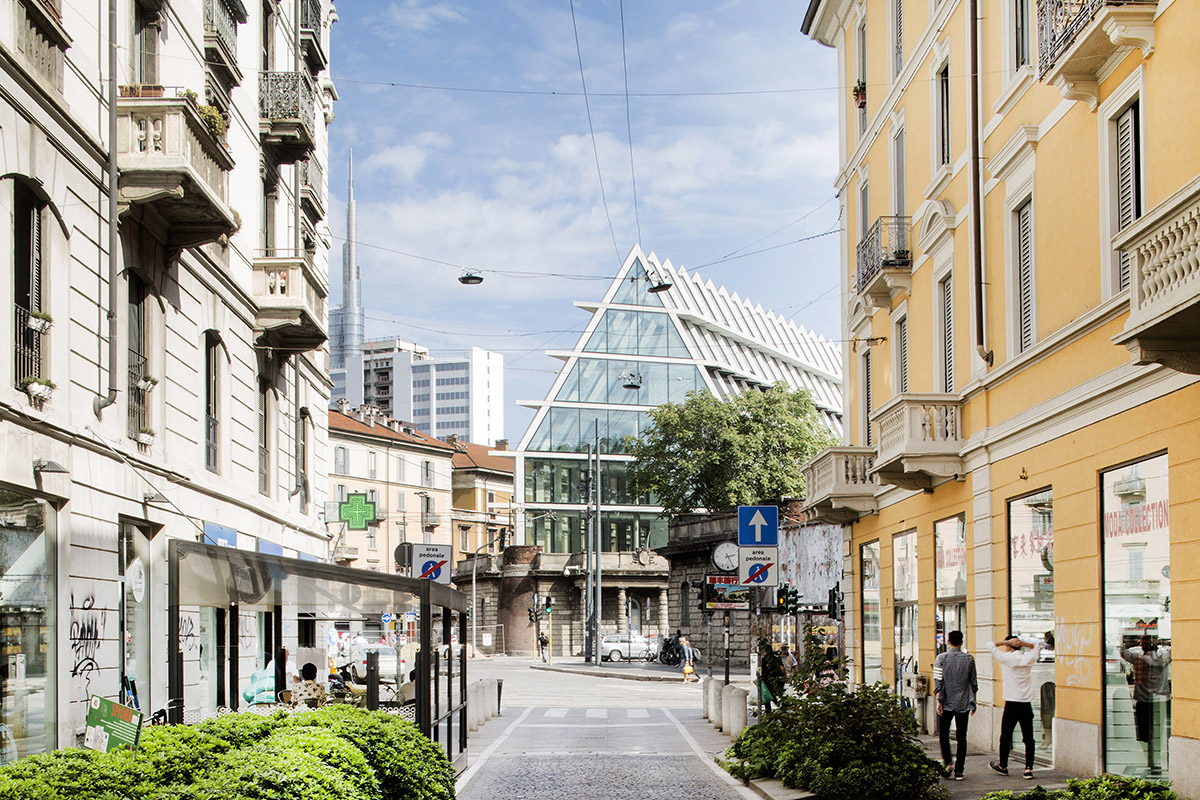 The twin buildings are inspired by the long, linear Cascina buildings of traditional rural architecture in Lombardy, which already were an important reference in Aldo Rossi’s work, for instance his residential building in Gallaratese.

Today, Herzog & de Meuron's reference points indicated the emptiness of the site as a testament to the walls and, at the same time, reminded one of the destructions this area has suffered during the Second World War. The other refence point for the firm was the Gate within the city and together with a series of preserved gates, the two Caselli Daziari di Porta Volta offered an important reference point within the Milanese city plan. 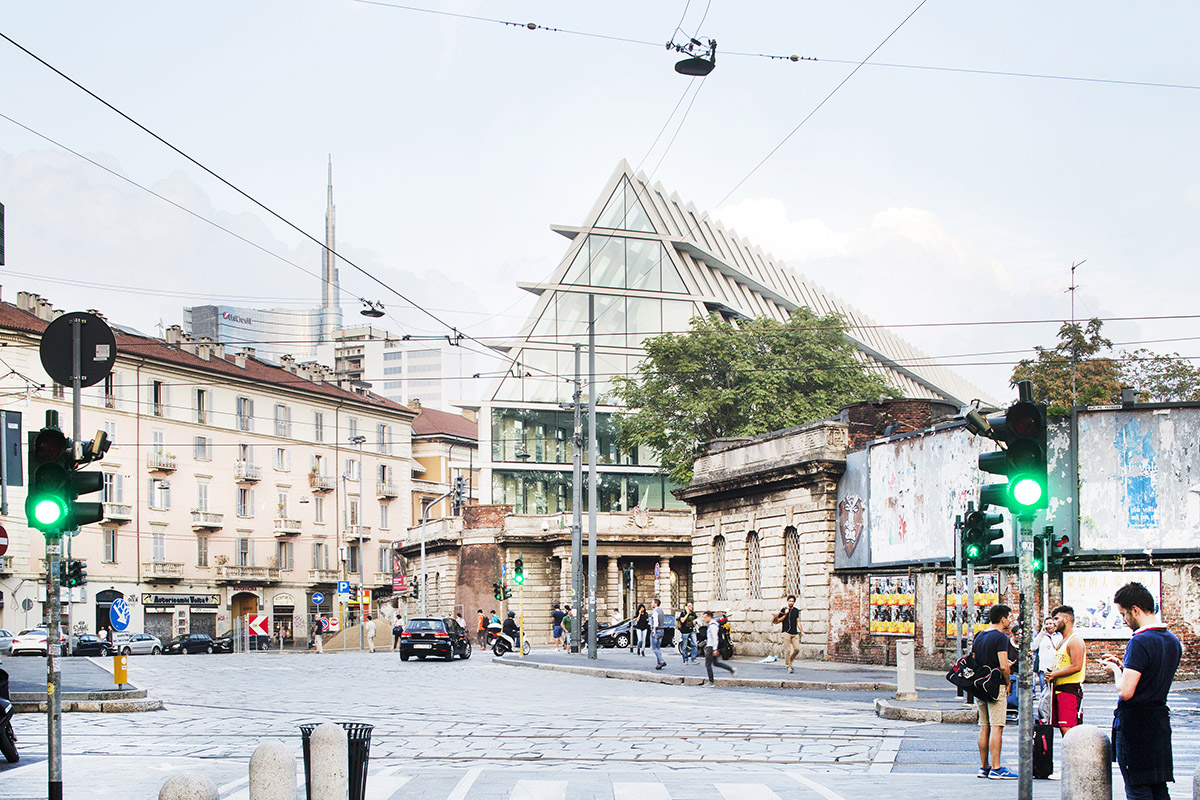 Besides the preservation of the Mura Spagnole’s archaeological remains, the concentration of building mass endeavours to create a generous public green area as extensions of the existing boulevards. On the street level, the new edifices will house cafes, restaurants, and shops, offering an area for interaction and recreation to the citizens.

A narrow gap separates the Fondazione from the adjacent building, reflecting two autonomous constructions which are simultaneously part of an overall whole. In the ground floor, the Fondazione accommodates the main entrance, cafeteria and book store, followed by the double height multi-functional space on the first floor, and an office area on both the third and fourth floors. 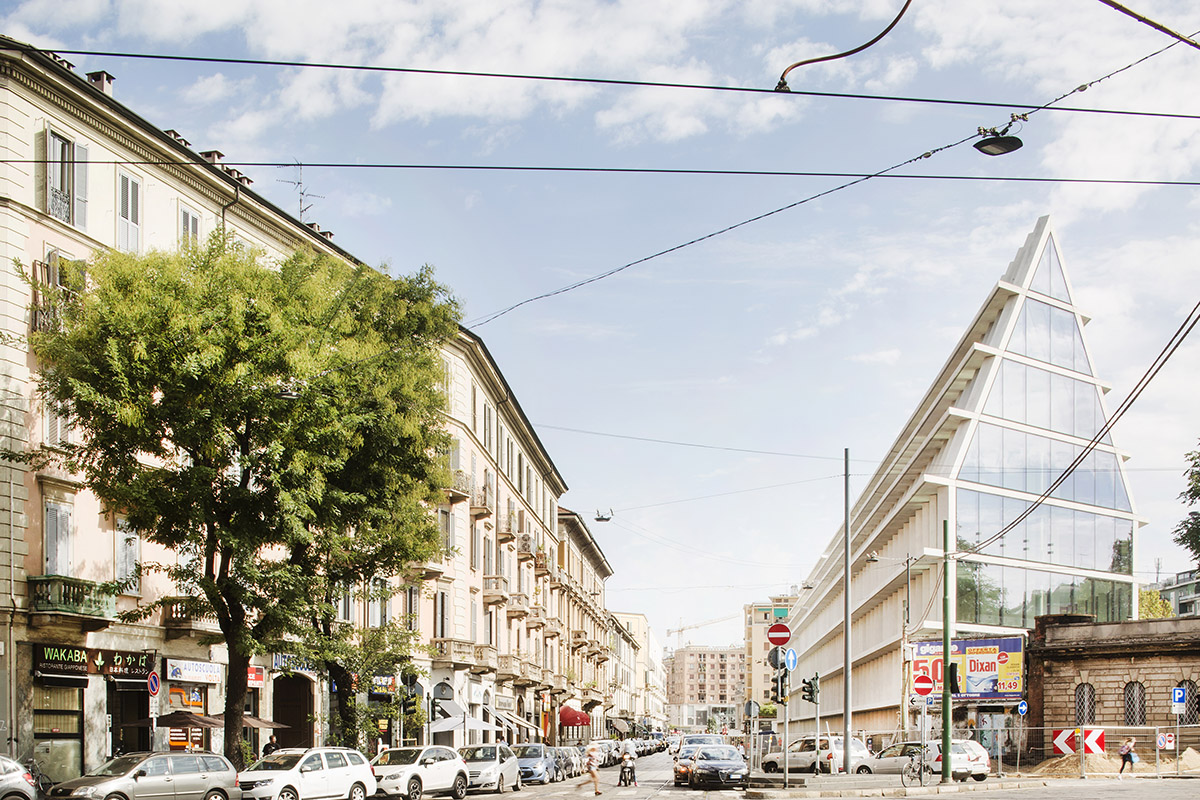 The five-storey building is comprised of a series of glazing surfaces and grid-geared facade -which presents the structure in a special geometry. Feltrinelli Porta Volta creates its own architectural language and authenticity with its 'melted' roof into the facades.

The balance between the concrete divisions and transparency on the facades are well-defined and kept throughout the buildings. The building seems like it has always been there-it is the perfect fit to the context with its overall geometry and carries the historical references of the site in an elegant way. ''The redefinition of Porta Volta holds an important strategic potential for creating a positive impact on the entire surrounding area. In that sense, this undertaking by a private client - the Feltrinelli Group - has an important urban dimension, strengthening and reinforcing the City of Milan,'' said Jacques Herzog and Pierre de Meuron. ''The intervention in Porta Volta will intrinsically be a Milanese Project. With their scale, structure and repetition and being conceived as twin buildings, the new edifices are taking up themes of Milanese urbanism and architecture, which through the course of history have led to a series of emblematic buildings for which the City of Milan is widely renowned and admired,'' they added.

''Depending on the location of the observer, the building appears as a stone monolith or as a slender skeletal frame. When looking along the Viale Pasubio, which runs parallel to the building, the façade closes and forms a clearly defined street space together with the opposite building from the late 19th century. Whereas if you look at the facade frontally, the structure dissolves and creates a spatial connection between the street and the park behind the building,'' said Andreas Fries, Partner in Charge. 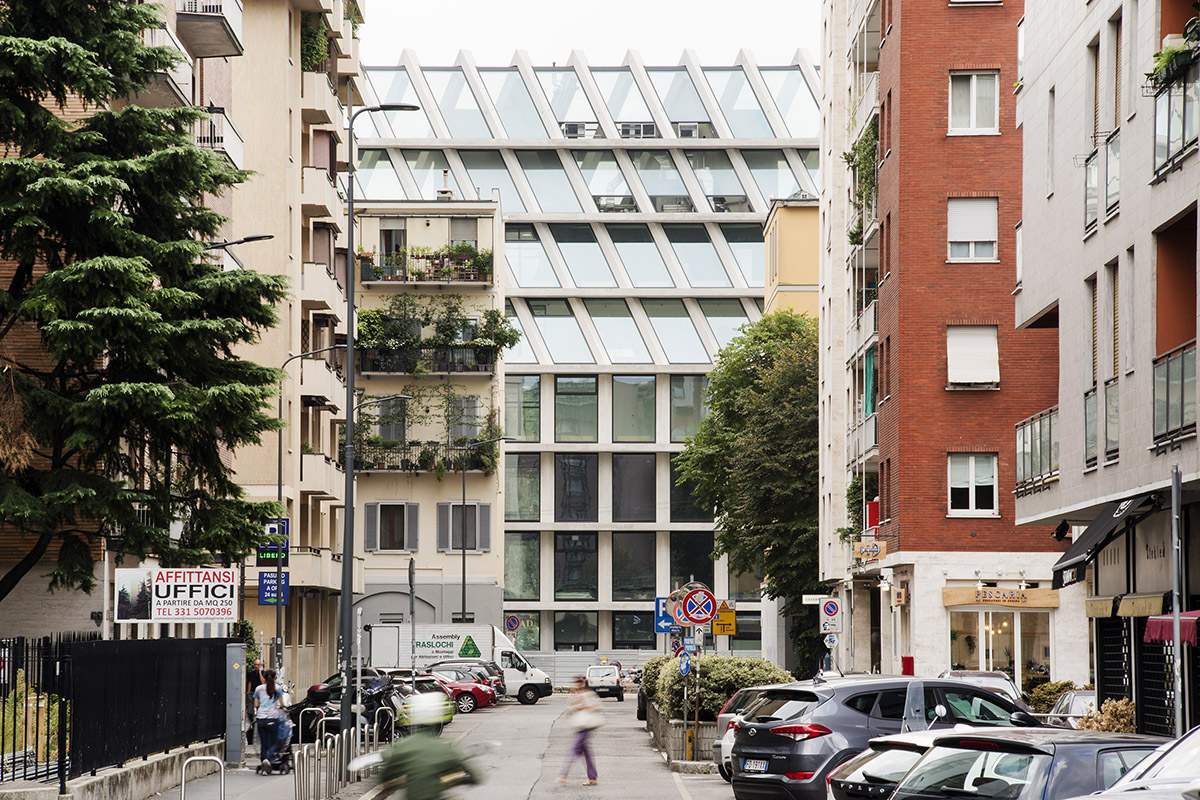 The Feltrinelli Porta Volta building officially opened to the public on December 13, 2016 with inaugural speeches by Jacques Herzog, Carlo Feltrinelli, President of Fondazione Feltrinelli, and several leading figures and politicians from Italy. 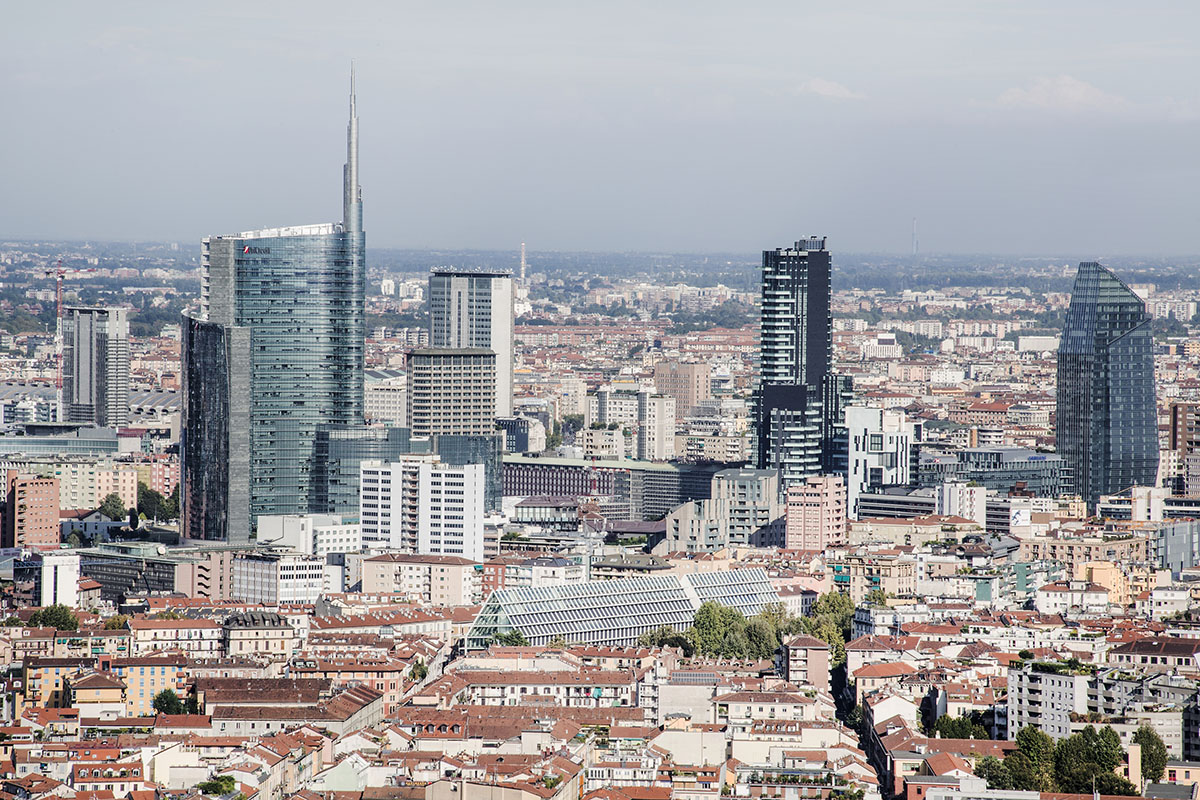 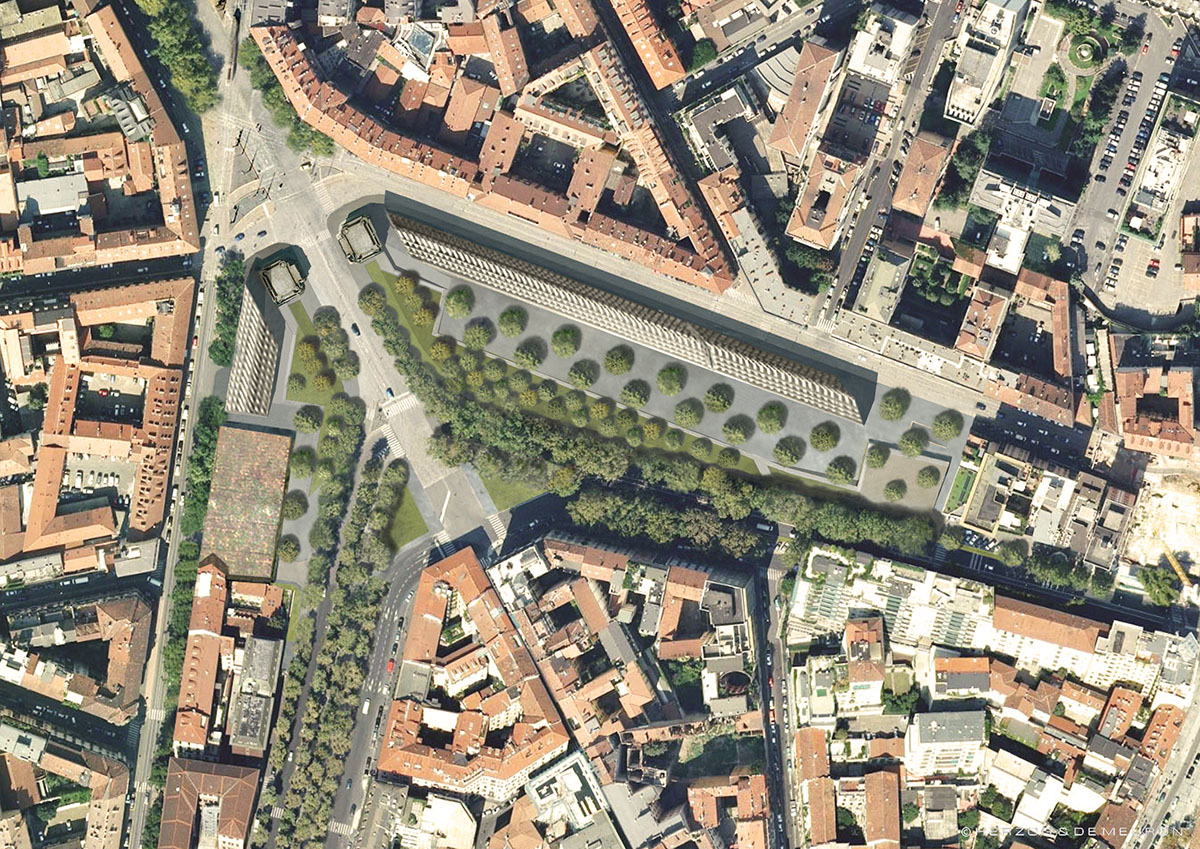 Herzog & de Meuron recently completed the Elbphilharmonie in Hamburg, Germany-a hotly-anticipated building opened its plaza to the public at first and the overall building will officially be opened on January 11, 2017. The studio completed the extension of the Tate Modern Art Gallery in London. Vitra Schaudepot on the Vitra Campus by Herzog & de Meuron is another iconic intervention in Weil Am Rhein, Germany, opened to the use in June.

Herzog & de Neuron was also commissioned to design the Museum of the 20th Century in Berlin, which was announced in October.