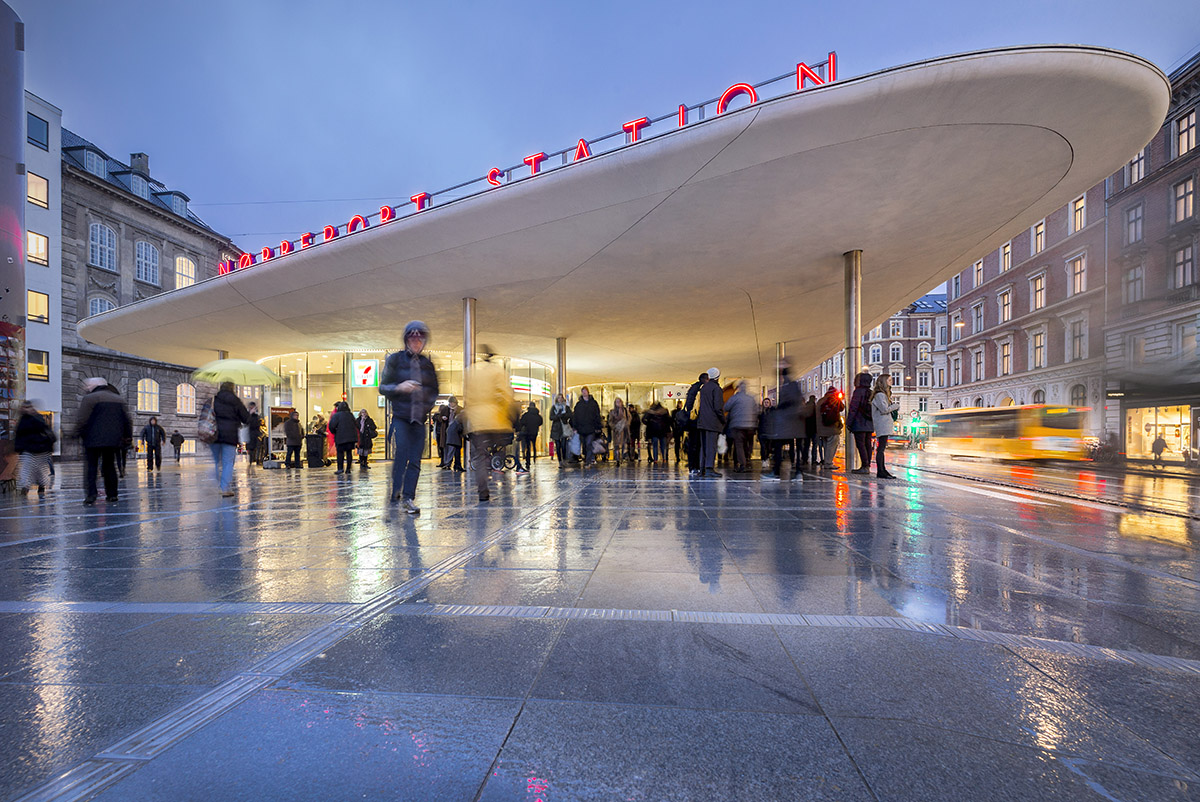 Centre de Cultura Contemporània de Barcelona (CCCB) has announced the winners of the 9th European Prize for Urban Public Space 2016 today, which include Caldes De Montbui in Spain and Przelomy Centre for Dialogue in Solidarnosc Square Szczecin in Poland as joint winner.

For this year, the jury 9th European Prize for Urban Public Space 2016 has also created a special category in order to recognise the public policies introduced and supported by the city of Copenhagen and selected 3 best projects, promoting best public space for pedestrians and cyclists.

It hopes in this way to draw attention to its determination and persistence in reconquering public space from private vehicles, which formerly overran it, so that it can be used by pedestrians and cyclists. All of these policies are the result of a commitment to ensure that a good quality of urban life is available for everyone. 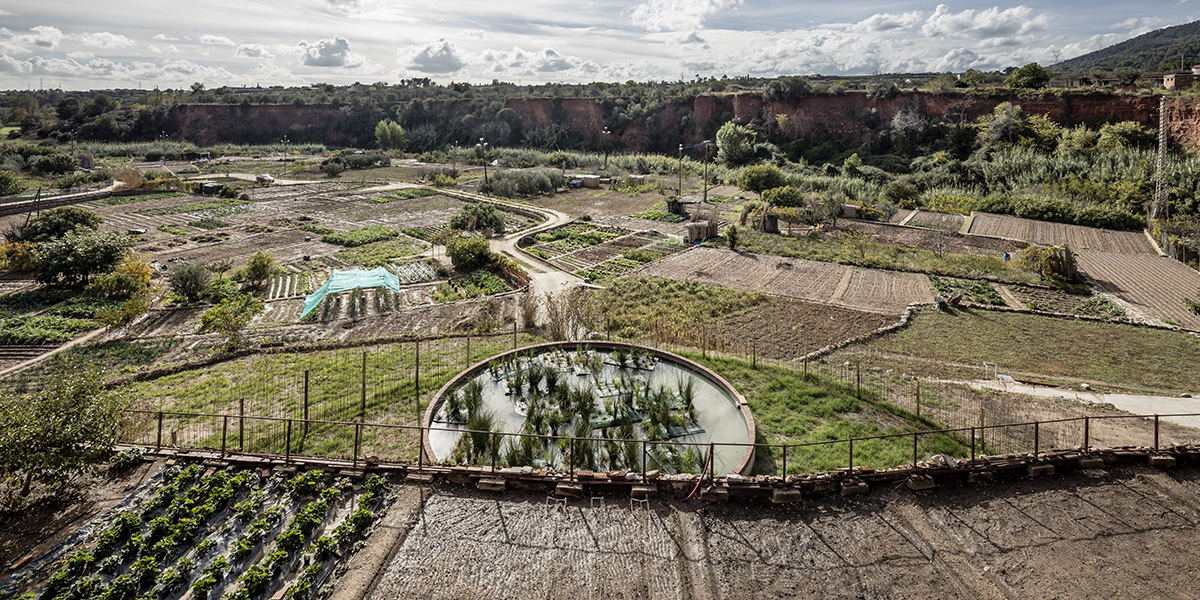 During the twentieth century uncontrolled urban development of the periphery of Caldes de Montbui seriously damaged the Hortes de Baix (Lower Orchards), more than three hectares ancient agricultural land which, for centuries, had been irrigated by the town’s surplus thermal waters. Bad smells and health risks resulting from the contamination of the irrigation system by sewage, together with partial covering of the main canal, inaccessibility of the orchards and bad management of waste water from private spas ended up causing a rupture among the community of farmers using the irrigated land and the eventual collapse of the agricultural system. 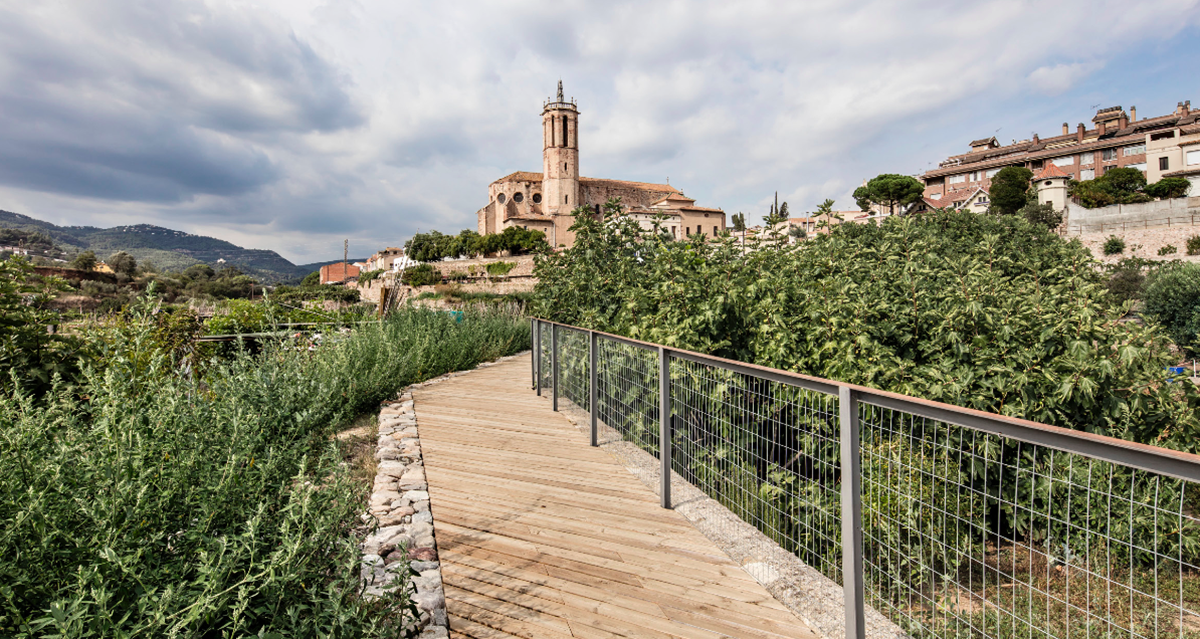 Recovery of the irrigation system of the spa allotments Caldes de Montbui (Spain), 2015

However, after 2012, the town council introduced a participative process which brought together more than seventy horticulturalists. With their agreement, the sewage was properly channelled, the old irrigated land was supplied with clean water and a new network of accessible paths connected the orchards with the old centre of town. The land is now once again a productive space, keeping the horticultural tradition of Caldes de Montbui alive, contributing towards its food sovereignty and raising awareness among the town’s inhabitants concerning the importance of democratic management of the public good of water resources.

Solidarnosc (Solidarity) Square was a physical expression of the historic fracture in Szczecin after the Second World War. Named in memory of sixteen workers who were killed in 1970 when they demonstrated against the Soviet regime, the square had little relevance beyond this purely commemorative function. Its urban surrounds, anonymous and featureless, had not recovered from the massive destruction of allied bombing attacks at the end of the Second World War, after which the city went from German to Polish control, whereupon its entire population was replaced, with all the tragic effects of such a change. 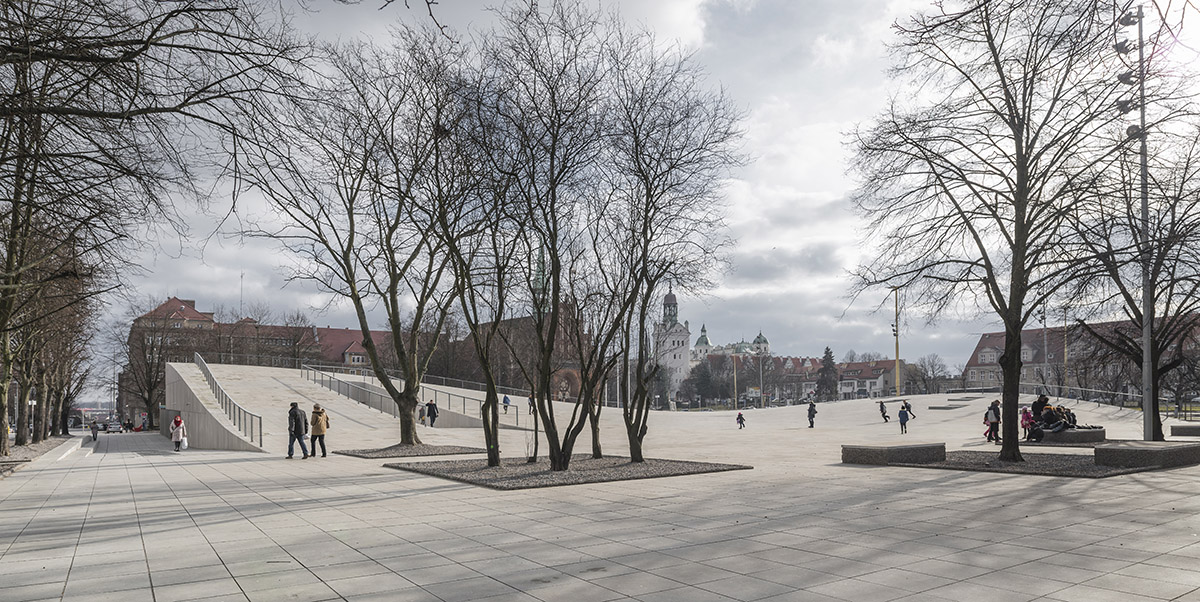 The square, which recently recovered its lost centrality with the construction of the new Szczecin Philharmonic Hall, has been completely refurbished. It is now the site of the underground “Przelomy” Centre for Dialogue, a branch of the National Museum, which aims to heal the wounds of collective memory. Meanwhile the sloping contours of its roof offer the city a public space for intensive, vibrant use in its everyday life. 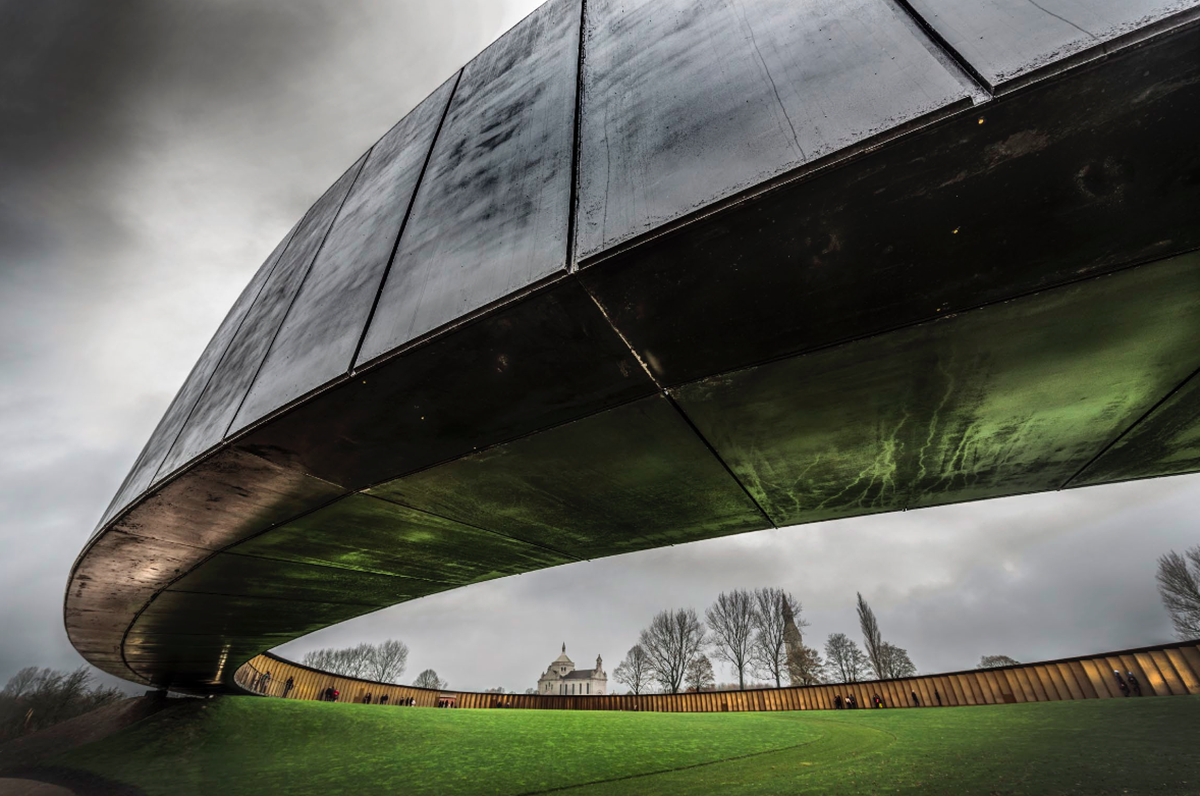 Since the end of the First World War, France’s biggest burial ground has been on the hill of Notre-Dame-de-Lorette, a scene of terrible massacres which now enjoys special natural and heritage protection. In 2014 the “Ring of Memory” was constructed as an international monument commemorating the hundredth anniversary of the outbreak of the war. It consists of an oval-shaped passageway which, along its more than three hundred metres, shows the names of more than half a million soldiers who lost their lives in the Nord-Pas-de- Calais region during the war. Its ring-like structure brings old enemies together in a unitary embrace, in alphabetical order and without distinction of military rank or nationality and, projected over the landscape of Artois, forms a cantilever of more than sixty metres which serves as a reminder of the fragility of peace in Europe. 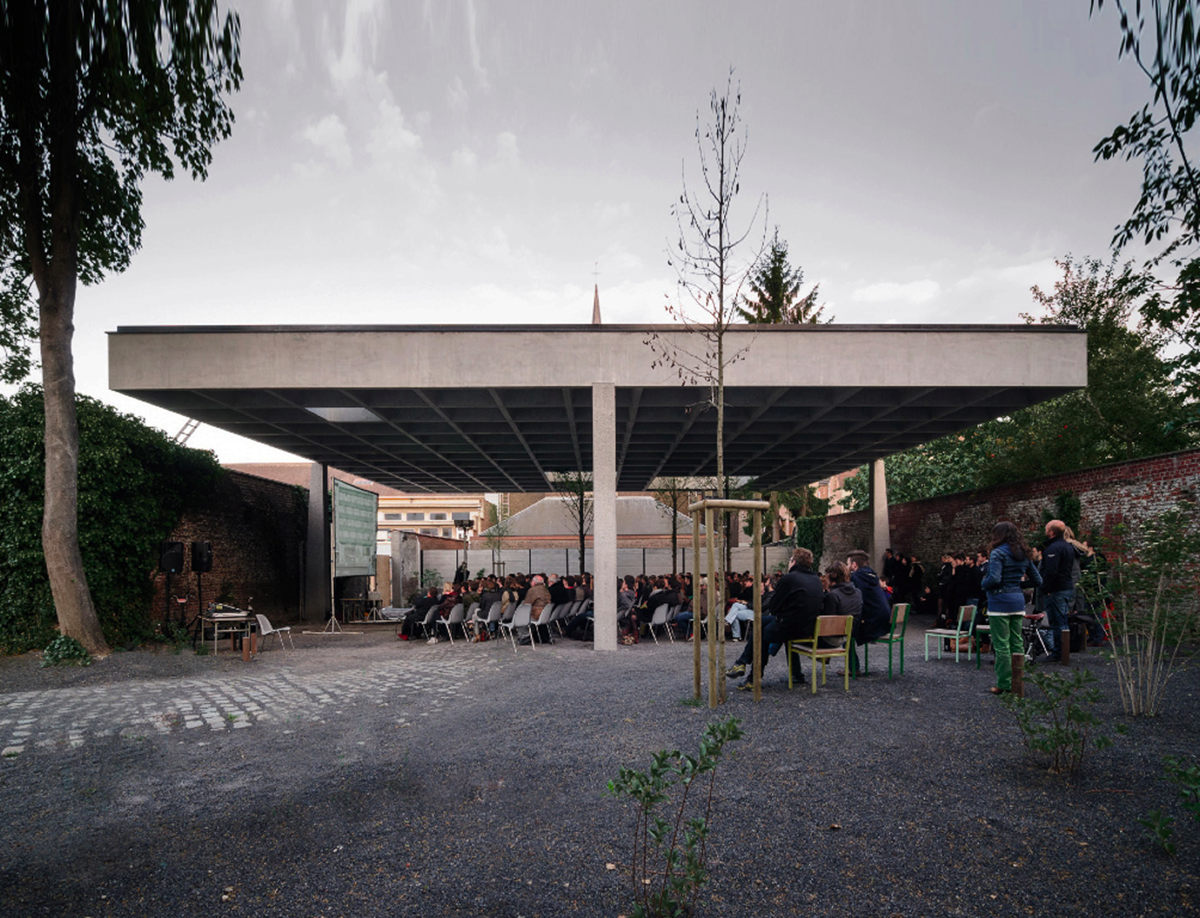 In the urban fabric of Brussels, Molenbeek-Saint-Jean has stood out for its particularly dense nature, the fact that it is beset by social conflict and, more recently, stigmatised by terrorist attacks in Paris and Brussels. While it lacked spaces that might have endowed the zone with some identity, between its buildings it is full of interstitial areas which are either closed off or used for sometimes questionable purposes.

One of these was the garden of a courtyard in a block on rue des Quatre- Vents, a residual space delimited at the rear by a public school, a church and a residential building. In 2015, as a result of a municipal plan for opening up and activating this and other similar wasteland spaces, the garden was equipped with a monumental porch. Its roof now provides shelter for parents and children leaving the school and, after school hours, offers this rather battered neighbourhood a decent and emblematic meeting space to be used for residents’ get-togethers, theatre, film screenings, concerts, workshops and barbecues. 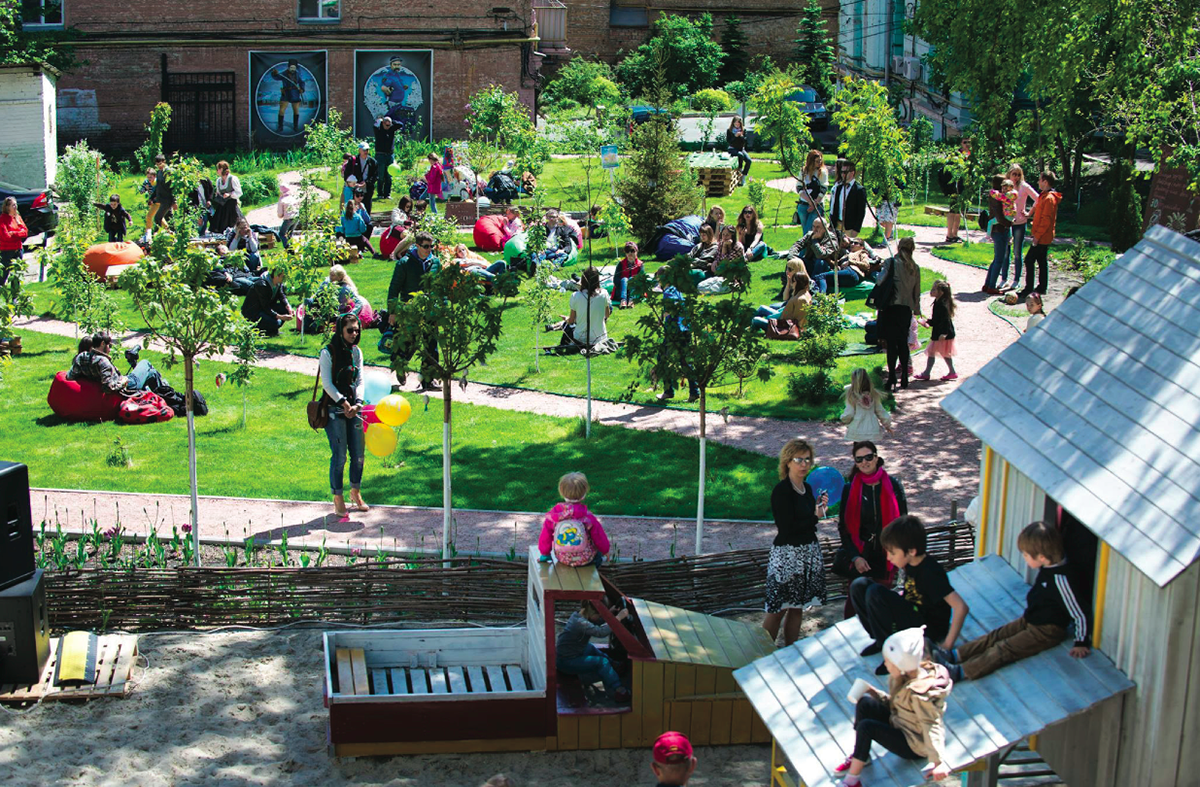 In February 2014, in the cruellest days of the Revolution of Dignity, some activists took down the fence surrounding an abandoned lot in the old city centre in order to put up barricades and defend themselves from the police. A week later, local residents decided to occupy the land as a meeting place where they could discuss what democratic reforms Ukraine needed. Helped by people who came from all over the world, they cleaned up the site and planted a self-managed garden, which was to become a memorial to the “heavenly hundred” shot down by the police.

On an adjoining flank wall they painted a portrait of the first person to be killed and planted trees brought from different parts of the country in homage to all the other victims. They also made a communal garden planted with ecological products, and installed a playground and a shed for storing tools and children’s toys. In the last two years some fifty open-air events have been held on the site, including concerts, lectures, exhibitions, educational games, performances and a film festival. Hence, it is by way of creative activities rather than candles and tears that the people have wanted to keep alive the memory of those who were killed when they called for more democracy. 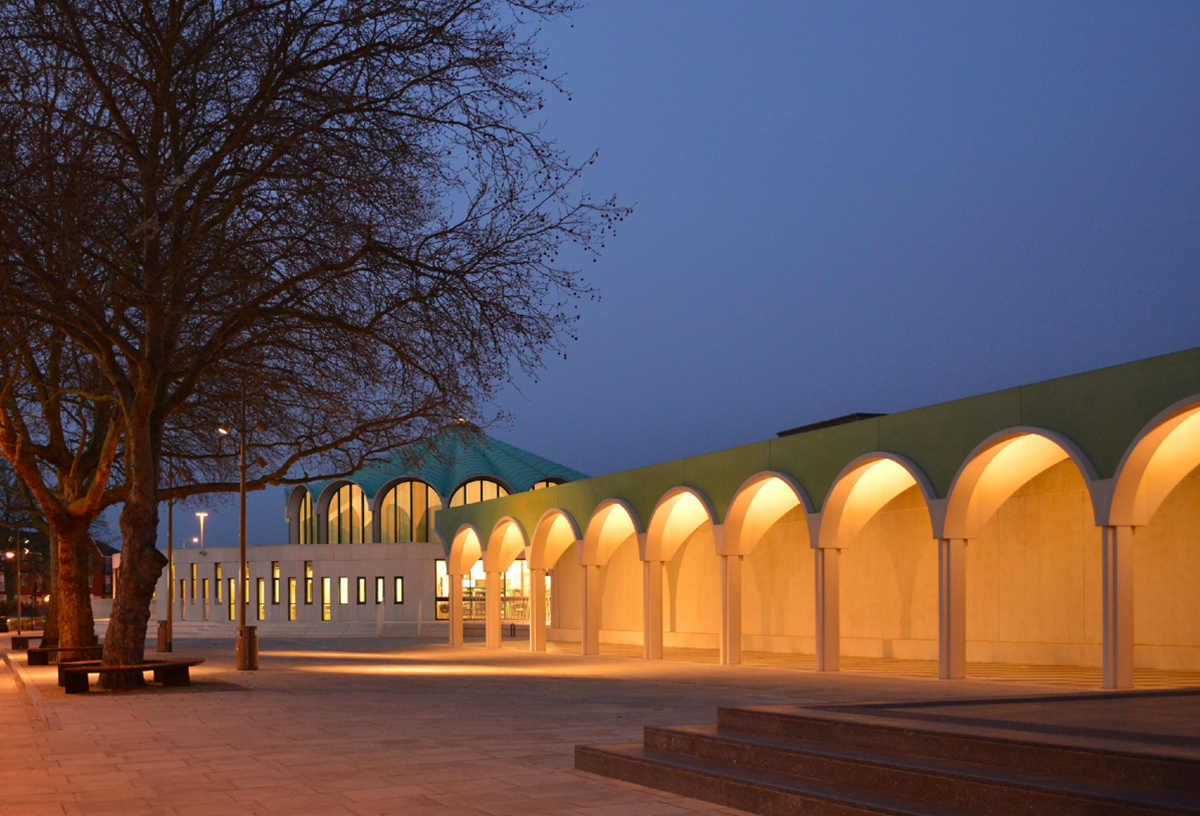 Barkingside is a suburb in the easternmost outskirts of London, close to the metropolitan Green Belt. In the 1960s, in an attempt to compensate for the deficits brought about by overly rapid urban development, some facilities were installed, including a complex consisting of a public library and a municipal sports centre. Despite this effort and its proximity to a busy main street, the windowless facades of the complex and neglect of the surrounding spaces drained the space of the vitality proper to a highly populated neighbourhood with imminent prospects of further growth.

Hence, in 2015, the council gave its support to a strategic intervention which joined a loggia to the bare facade of the complex. Its conspicuous but welcoming presence, the greenery of the new Virginia Gardens and renovated shop fronts in the main road have succeeded in giving the Barkingside town centre the civic representativeness it formerly lacked. 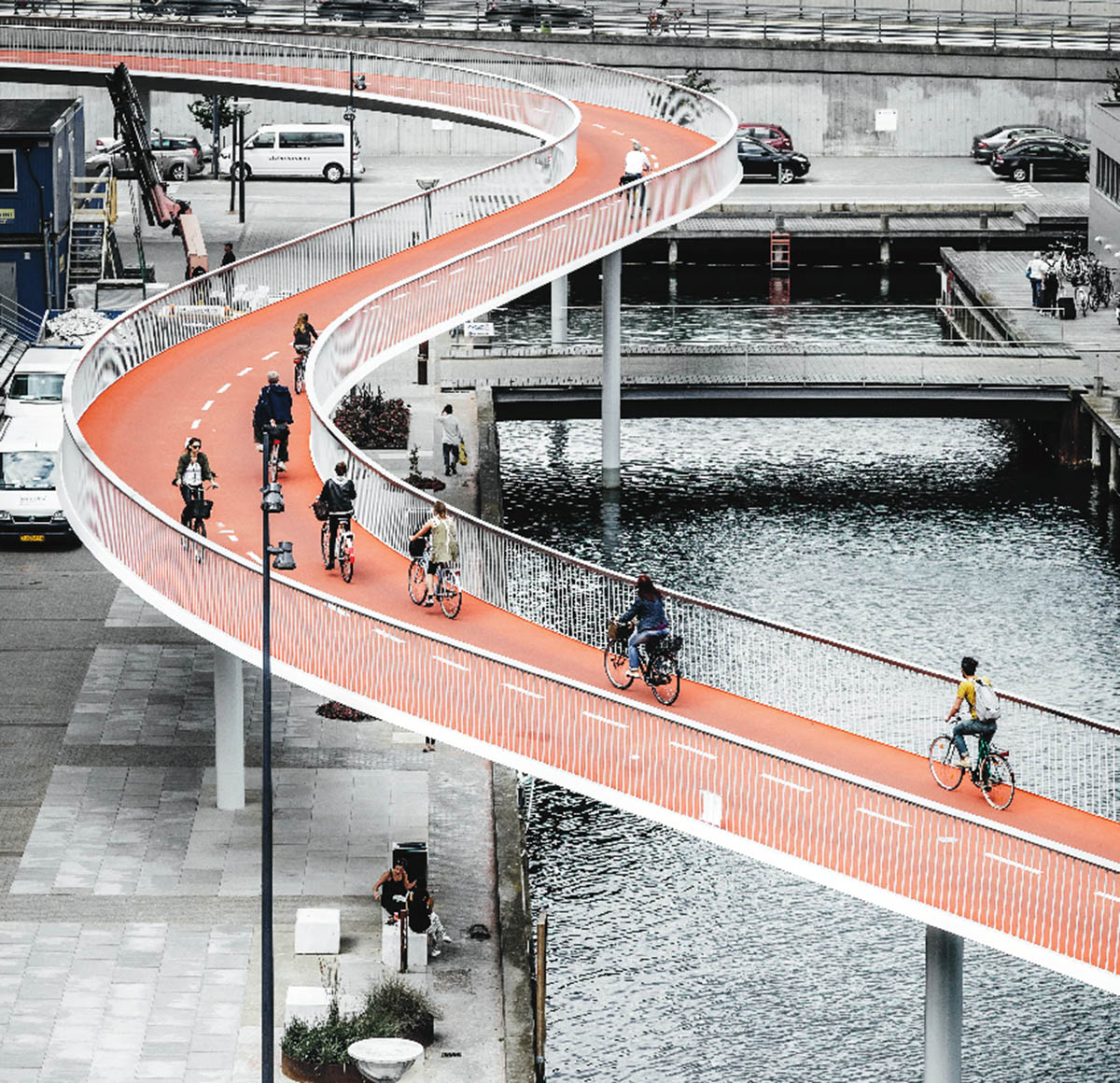 The jury members stated that for its enlightened policy-making and seriousness in its present and future vision of the city. Reflecting this enlightenment is the fact that, among the 25 finalist works of the 2016 European Prize for Urban Public Space, several are from Copenhagen and its metropolitan area. All of them show great determination to encourage a comfortable presence of people in their urban surroundings. 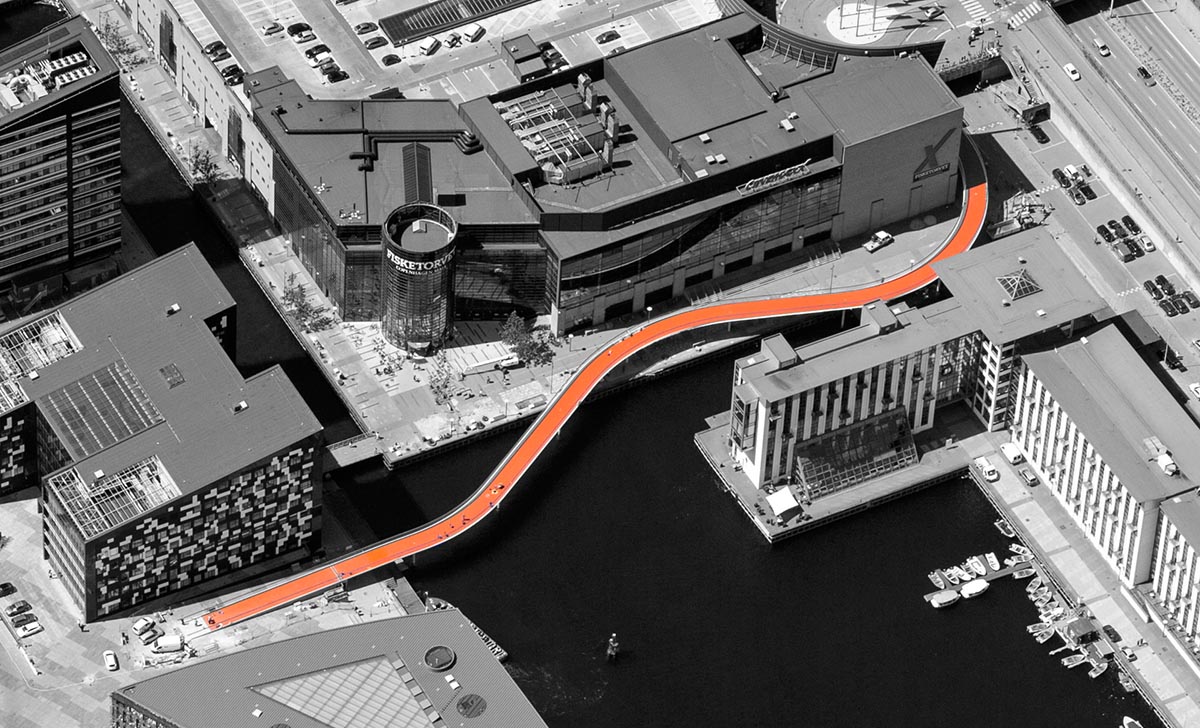 A commitment to the quality of life in urban public space throughout the city is expressed in innovative interventions related with such important issues as mobility or water management. The city has invested in democratic, sustainable mobility with an emphasis on public transport and bicycle traffic rather than cars, while also highlighting proper use and enjoyment of its water resources. With this Special Recognition, the Jury recognises the reconquest of the city as a role model which could be taken up worldwide. 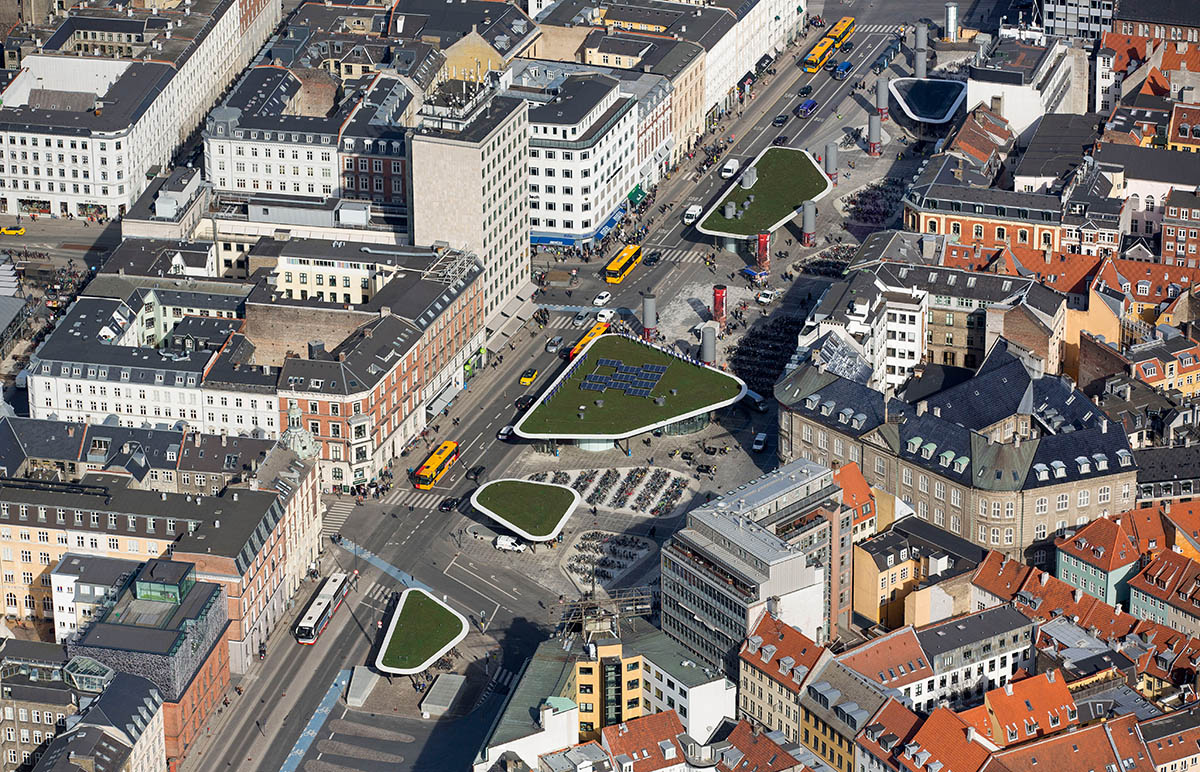 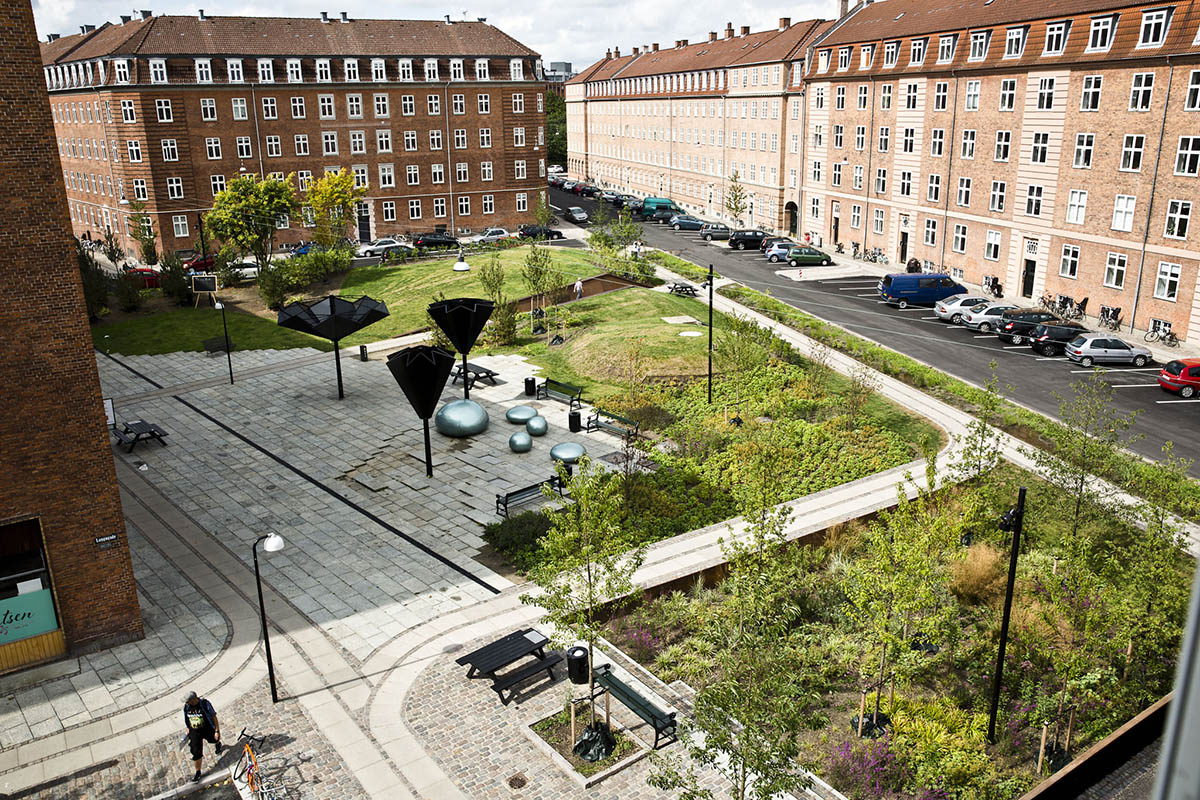 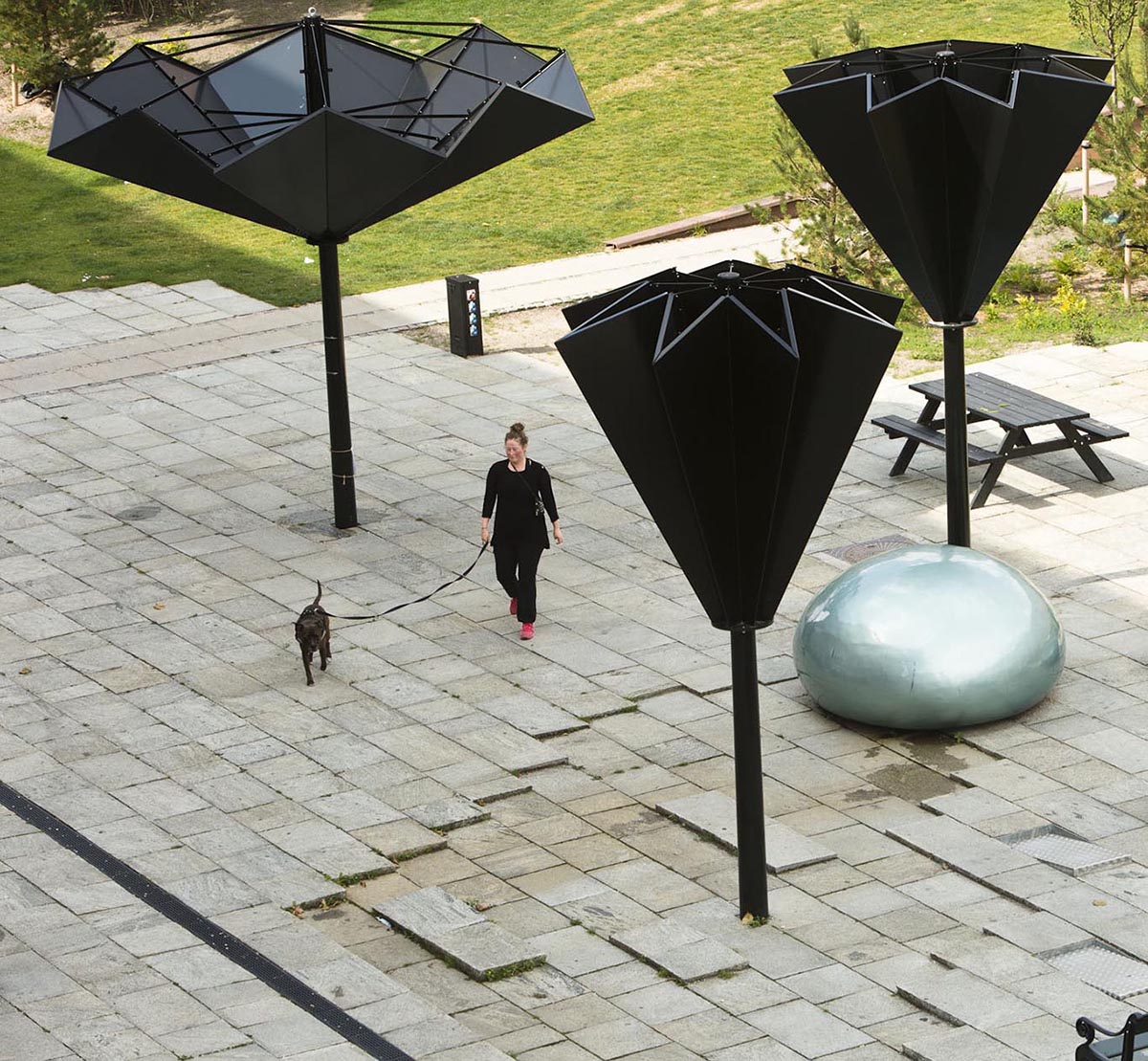 In this year’s award a total of 276 projects from 205 cities and 33 European countries have been presented. The Prize is an honorary award to both authors and promoters of the works chosen. The prize-winning works, the finalists and a selection made by the jury will be published in the European Archive of Urban Public Space, which has brought together and publicised the best works presented for the Prize since it was first offered in 2000.

The jury has selected 25 projects for the strong shortlist. The finalists are from Belgium, Croatia, Denmark, Slovenia, Spain, France, Latvia, the Netherlands, Poland, Portugal, the United Kingdom, Switzerland and Ukraine.

All images courtesy of CCCB