New Slussen master plan is located at the heart of the historic city of Slussen and its archipelago, developed by Foster+Partners finally begins construction. The construction of the New Slussen is one of the largest urban transformation projects in Sweden, which was won by Foster + Partners following an international competition and is being designed in collaboration with the City of Stockholm. Costing in total SEK 12 Billion ($1,422,480,807), the project will create a dynamic urban quarter, responding to its historic context and transforming the city centre.

Slussen, built in 1642, is the lock that separates the sea from the fresh water of Lake Mälaren. In 1935 the lock was extensively covered by Lundborg’s and William-Olsson’s “four-leaf clover” concrete road structure, now dangerously eroded. The catalyst for the project is an urgent need to replace this dilapidated water and transport infrastructure.

Foster+Partner's new masterplan offers an opportunity to readdress balance between road vehicles, pedestrians and cyclists while enhancing the public realm.  A new civic quarter for all, it will provide state of the art transport links alongside prominent new public buildings, animated by new restaurants, cafes and cultural amenities.

Public space with the integration of water -paved by wood +pathways.

The scale and grain of the new urban plan deliberately preserves the city’s character and precious views and vistas at this historic location. A series of new public spaces, an accessible quayside, pedestrian and cycle routes seamlessly embolden the vital connectivity between the hip urban quarter of Södermalm and the closely packed 18th Century buildings of Gamla stan, transforming the once major traffic junction into the City’s new meeting place.

The Foster + Partners' design proposal recreates and reinforces pedestrian connections between these two districts that have long been separated by the maze of roads and concrete passages. It will also transform the existing infrastructure to minimise the threat of flooding by expanding the lock capacity five-fold and providing a 21st century transport interchange.

A central feature of New Slussen is the ‘Water Plaza’, a pedestrianised public space arranged around the new navigation lock and realigned quayside, animated by new restaurants, cafes and cultural amenities. On the Södermalm side, the space around the existing City Museum is extended out over the new below-ground transport interchange and shopping mezzanine to create a series of new public spaces. 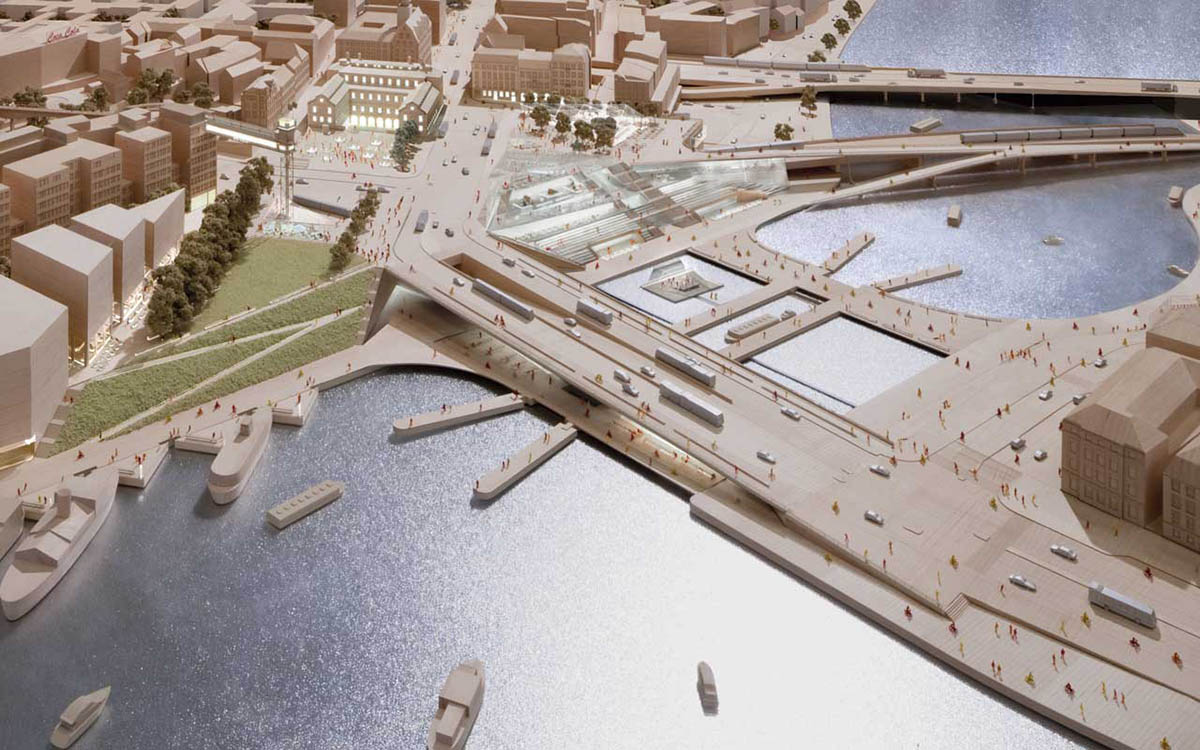 There will be a range of mixed-use buildings brought together in the new quarter, enhanced by an elegant new road and pedestrian bridge, with a dedicated new cycle bridge planned for the future. Once complete, the new public terraces will give visitors spectacular views over Stockholm.

''The City of Stockholm has truly embraced a wonderful opportunity to re-establish and reinforce the vital link between Stockholm’s central islands of Södermalm and the heritage site of Gamla stan, rehabilitating the historic fabric of the city while creating a lively new urban destination for all. This is a once in a life time undertaking in a uniquely significant and spectacular setting. We are honoured and very proud to be a part of this incredible and visionary project'' said Spencer de Grey, Head of Design, Foster + Partners.