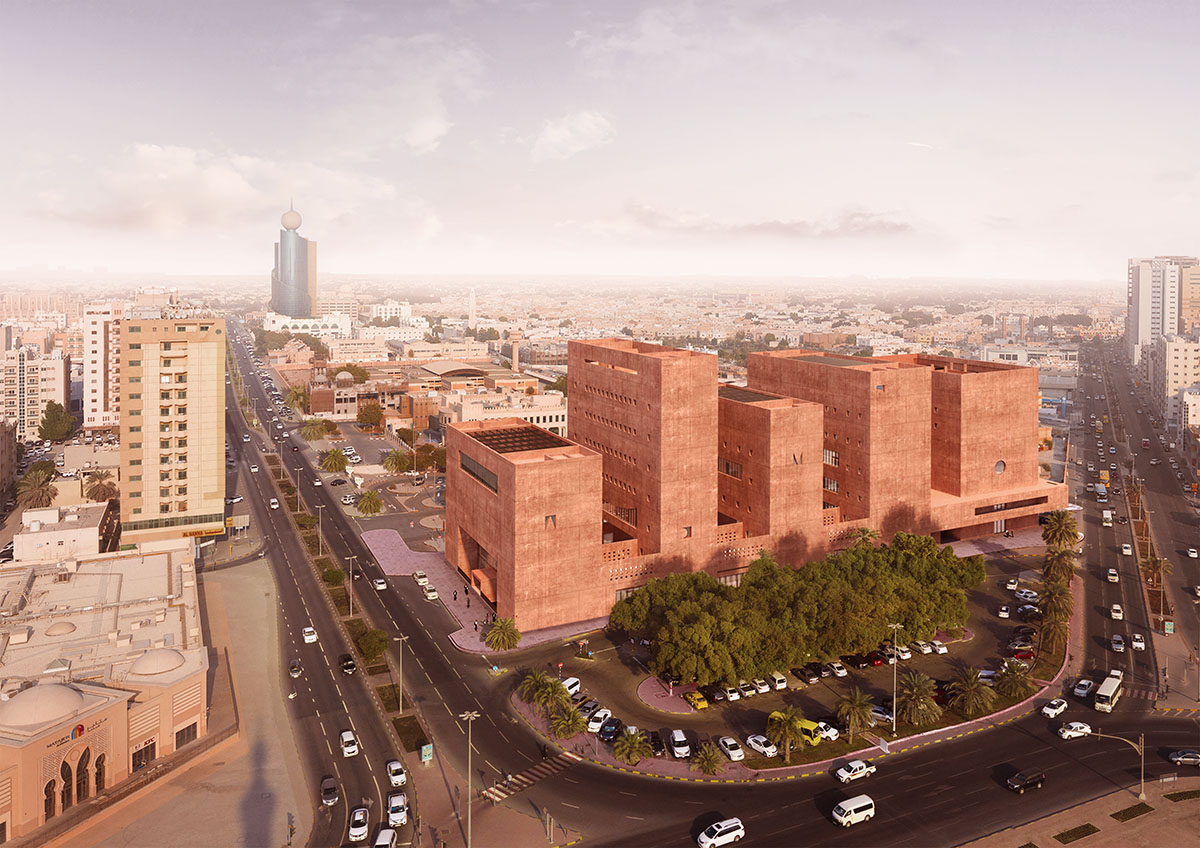 The new campus is the first center of its kind dedicated to the advanced study, research, and documentation of Africa and the African diaspora located in the Arab world.

Commissioned by The Africa Institute, the 31,882-square-meter campus will be built in downtown Sharjah, UAE and the project will define Sharjah’s skyline with five volumes made of red-pigmented concrete. 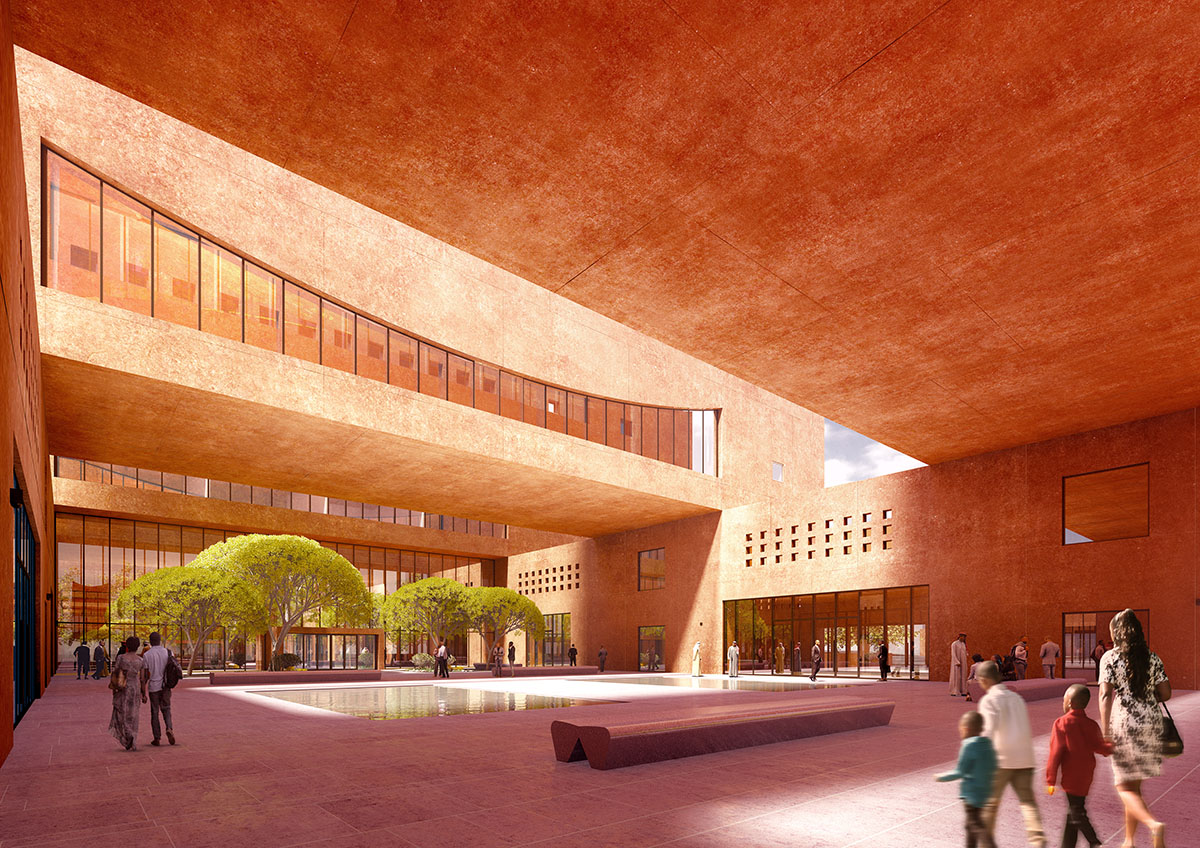 As David Adjaye explained, the new campus, which mediates the institution between different scales in the urban context, will "introduce an entirely new type of thinking and mission into the global academic arena."

"I am deeply humbled for the opportunity to design The Africa Institute in Sharjah, a project which introduces an entirely new type of thinking and mission into the global academic arena," said David Adjaye, founder and principal at Adjaye Associates.

"I envision the new campus as a springboard for the concretization of the incredible history of Africa, the African diaspora, and the Arab world," Adjaye added. 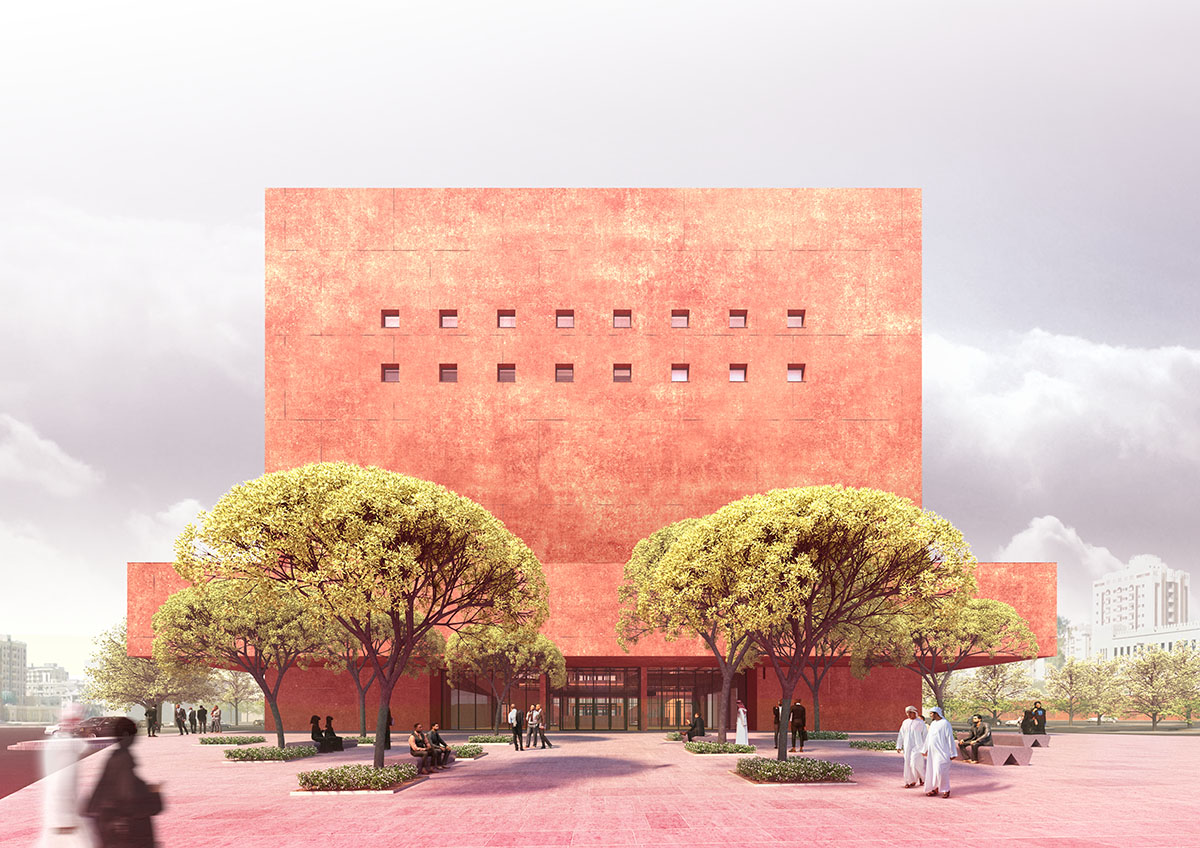 David Adjaye's design creates an enclosed campus comprised of five volumes, reaching four to seven stories in each. These volumes are connected by a series of open-air interior courtyards and punctuated by large overhangs which produce shade and relief from solar heat.

Clad in red-pigmented concrete, the structures will be made of low carbon concrete enhancing the desert typology which requires a sensitive and contextual response. 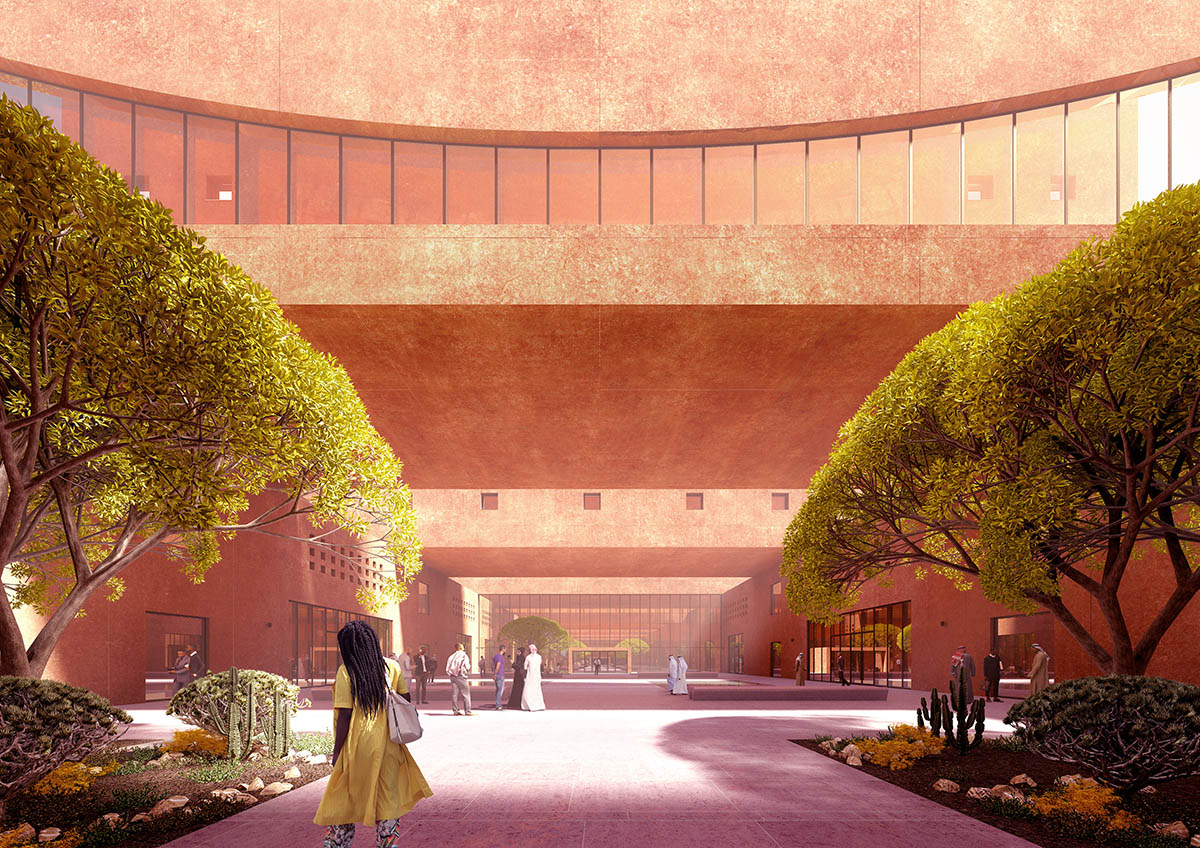 For the architecture of the building, Adjaye is inspired by the Gulf, Timbuktu, and Hausa architecture where trabeated solid masonry façades often shelter an internal courtyard and the ground floor is defined by the court which negotiates the transition between the city and The Africa Institute.

The open-air courtyards are designed on the first and ground floors which are punctuated by water features and native planters, while these courtyards also improve air circulation and provide natural cooling. 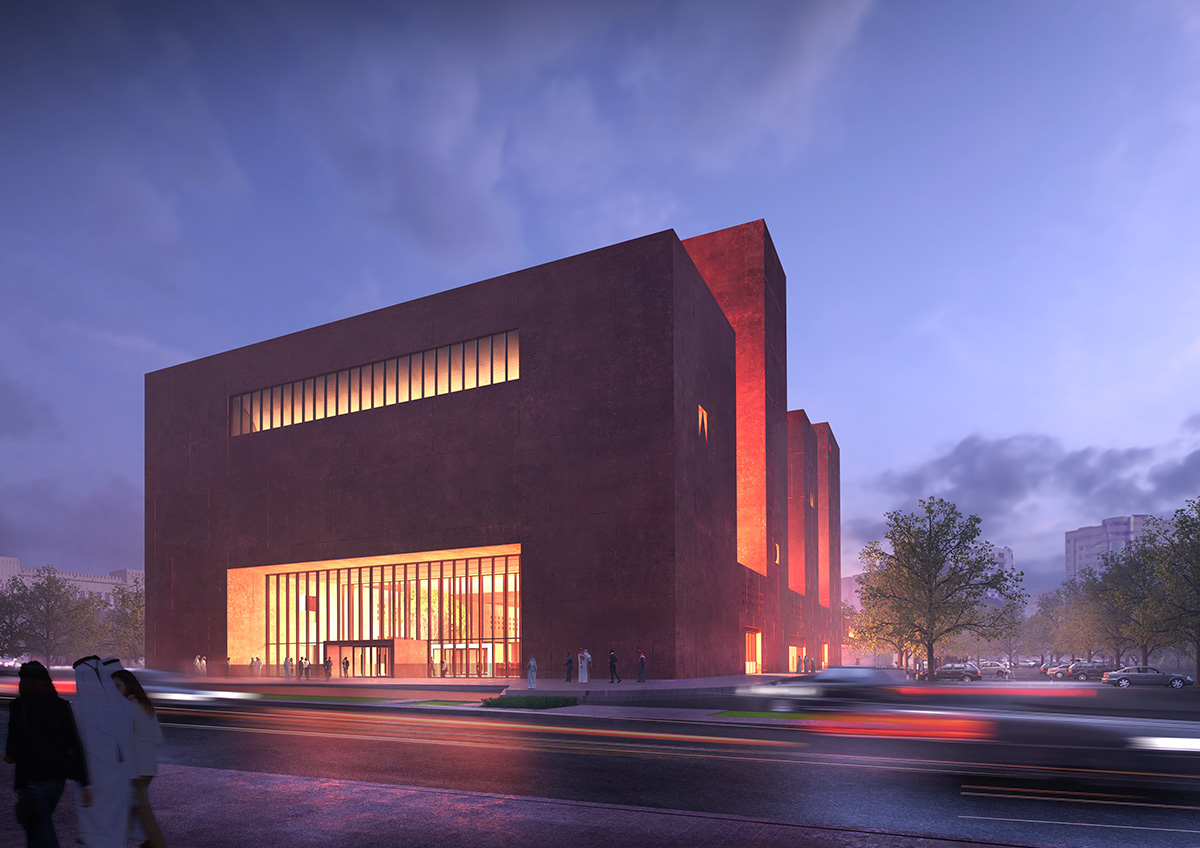 The campus will include spaces offering differing character and scale for classes and seminars as well as a research library and climatized archive facility, flexible auditorium and performance space, a restaurant and café, and a bookstore.

Entryways on each of its four façades will welcome the public and connect the architecture with surrounding institutions and public walkways. 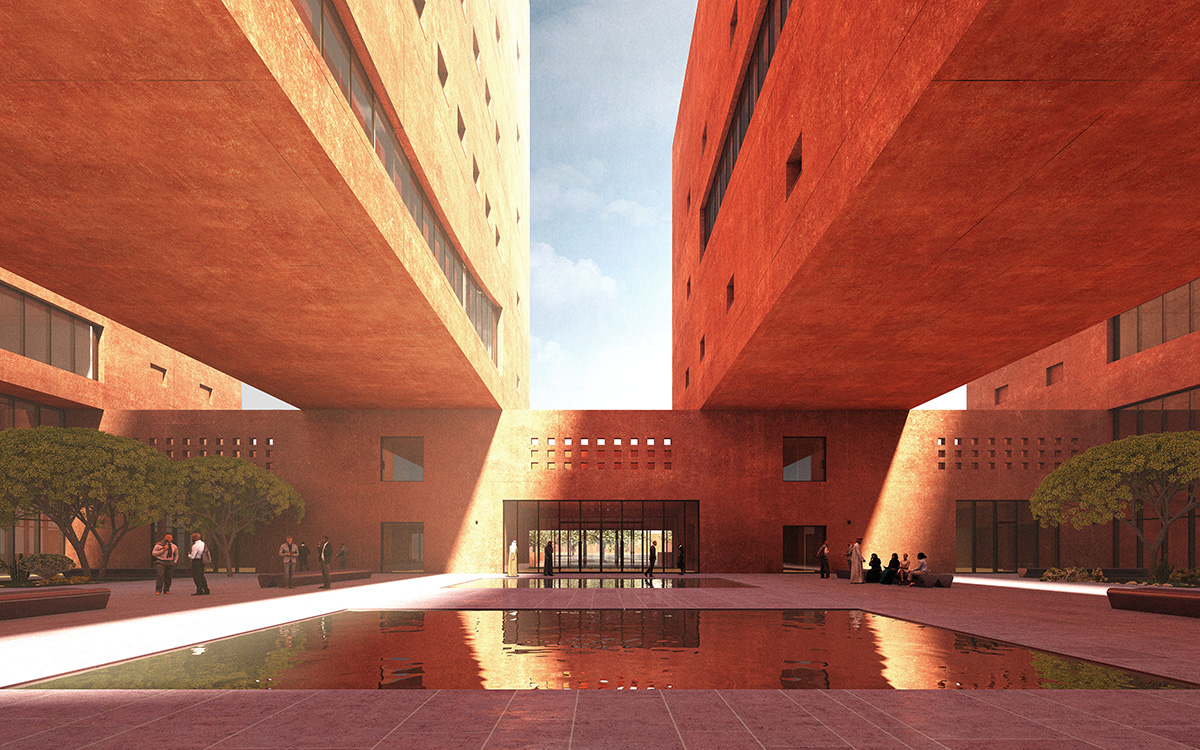 The Africa Institute is also commissioning artists to create site-specific installations throughout the public spaces of its new building, which will be announced at a later date.

"Our mission is to generate and infuse fresh thinking into an existing body of scholarship that largely conceives of the Gulf and Africa as separate entities. In doing so, the Institute will shed light on important yet overlooked historical linkages that shaped the past and influence present events, including forced and voluntary migratory patterns, market-based economic fluctuations, and local and global political changes." 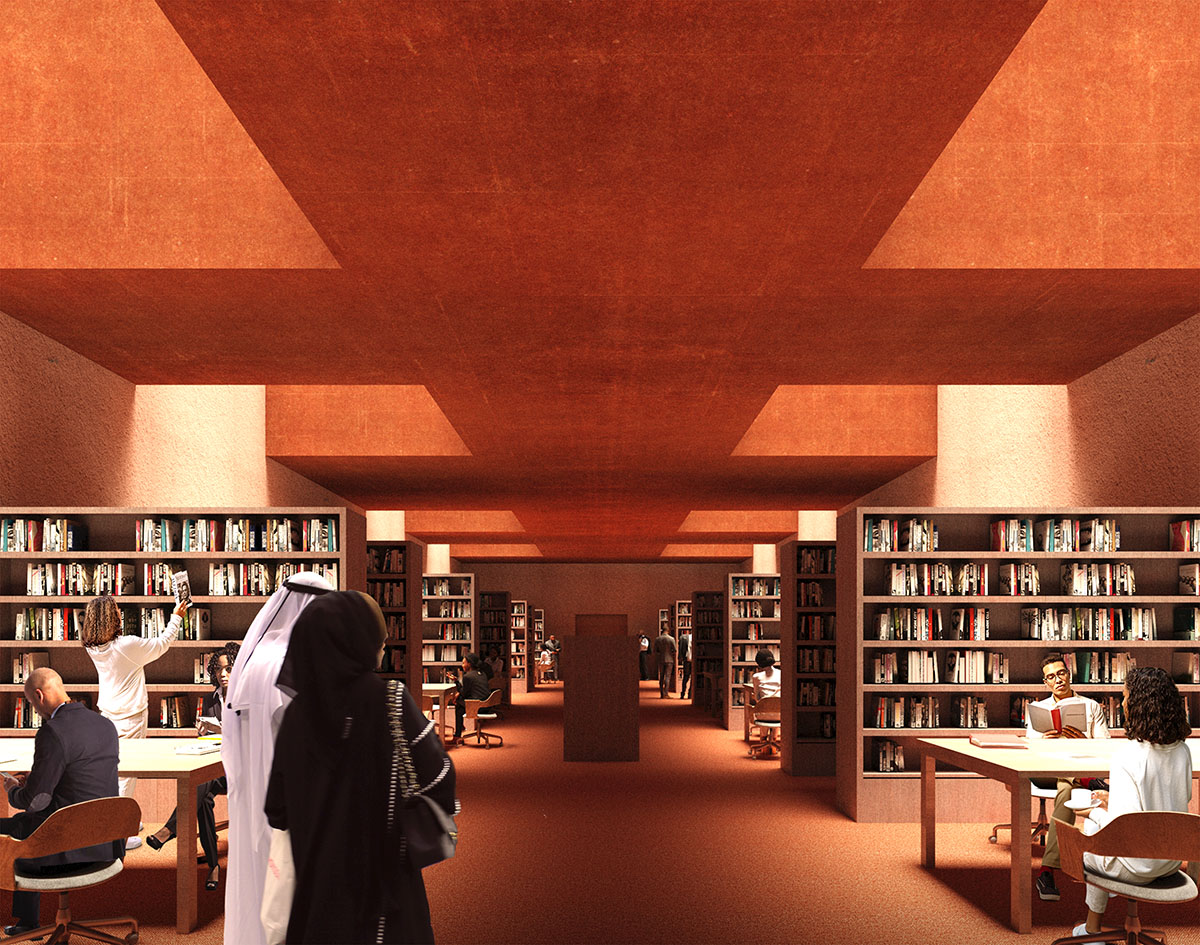 "We selected David Adjaye to create the first purpose-built home for this vital institution because of his experience in designing buildings that foster learning, collaboration, and community building,” stated The Africa Institute President Hoor Al Qasimi.

"We started working together in 2017 so that the vision for The Africa Institute and the building that supports its critical mission would be developed hand-in-hand."

"David’s ability to create such a beautiful sequence of diverse spaces and welcoming sense of place will make The Africa Institute a nexus for knowledge-building and learning that will serve people in the region and our partners across Africa and around the world for generations to come," added President Hoor Al Qasimi. 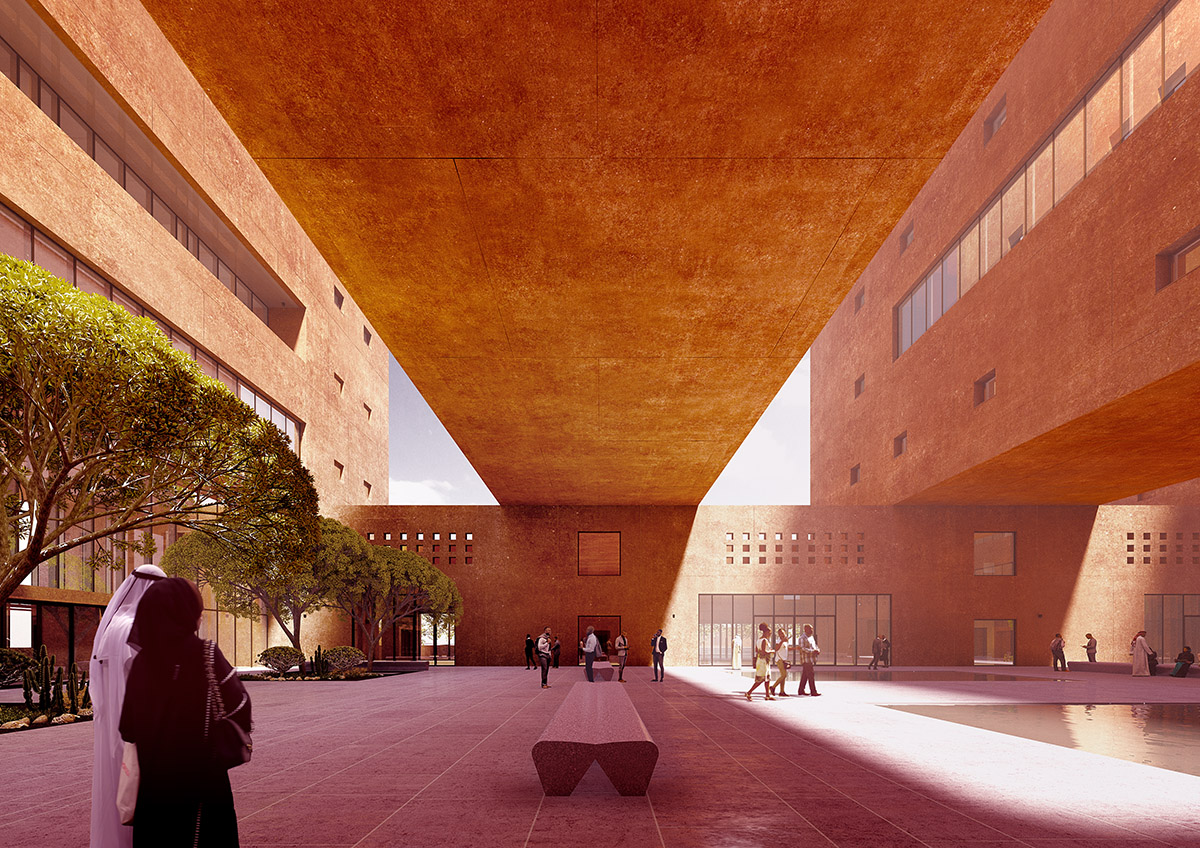 The language of the courtyard becomes a central form in the project that triggers how one lives and learns, stimulated by this region. Through these courtyards, the architects devise proper climatic conditions for the building and to construct cohabitate.

Four identifiable volumes will be floating above the ground floor, spanning the short side of the court and these four volumes will house the main elements of the Africa Institute such as the Teaching, Learning and Administration. 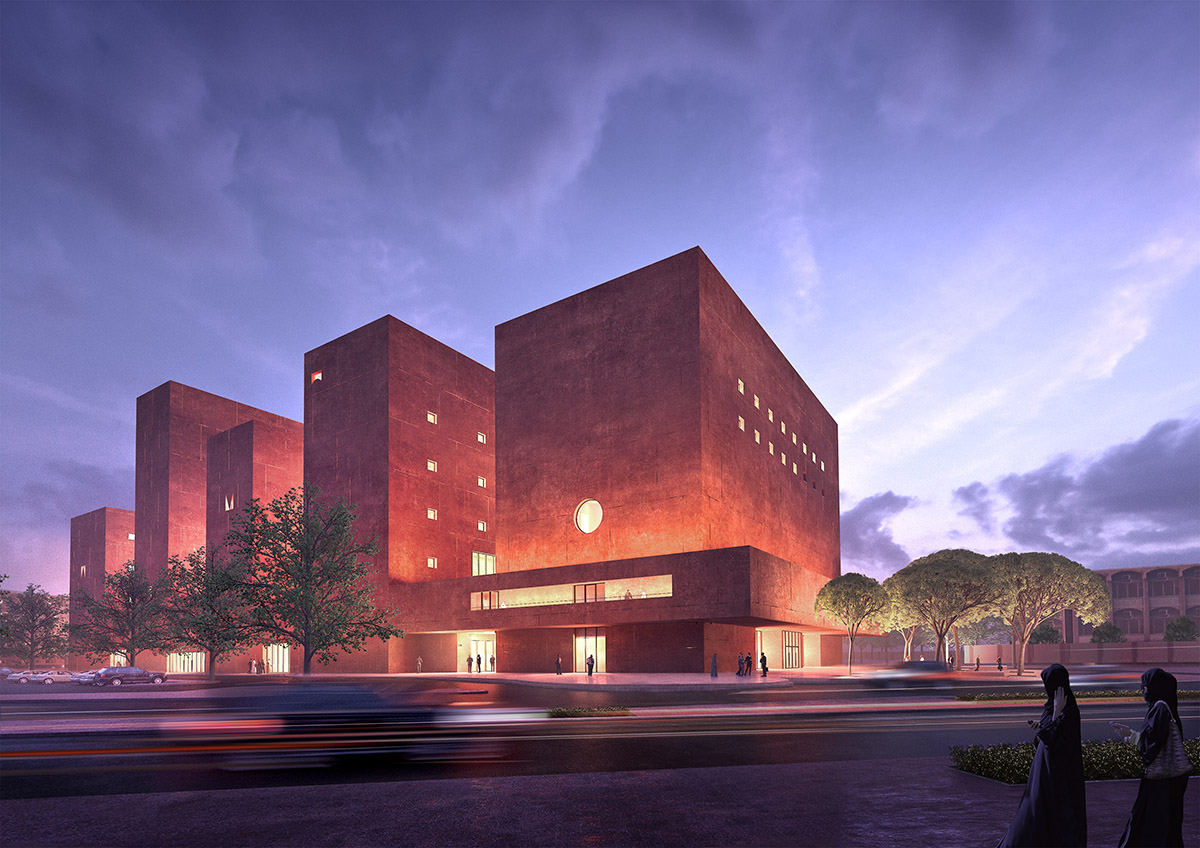 The Africa Hall will be placed at the fifth floating volume—closing the courtyard to the South, will welcome visitors from under a generous overhang, further evoking a regional language which requires the articulation of shade.

The introduction of large overhangs efficiently reduces solar heat gains and contributes to the overall building performance without the employment of large, technical infrastructure.

Underground is designed as a unified basement that will combine plantation and storage requirements with public programmes such as a Lecture Theatre. 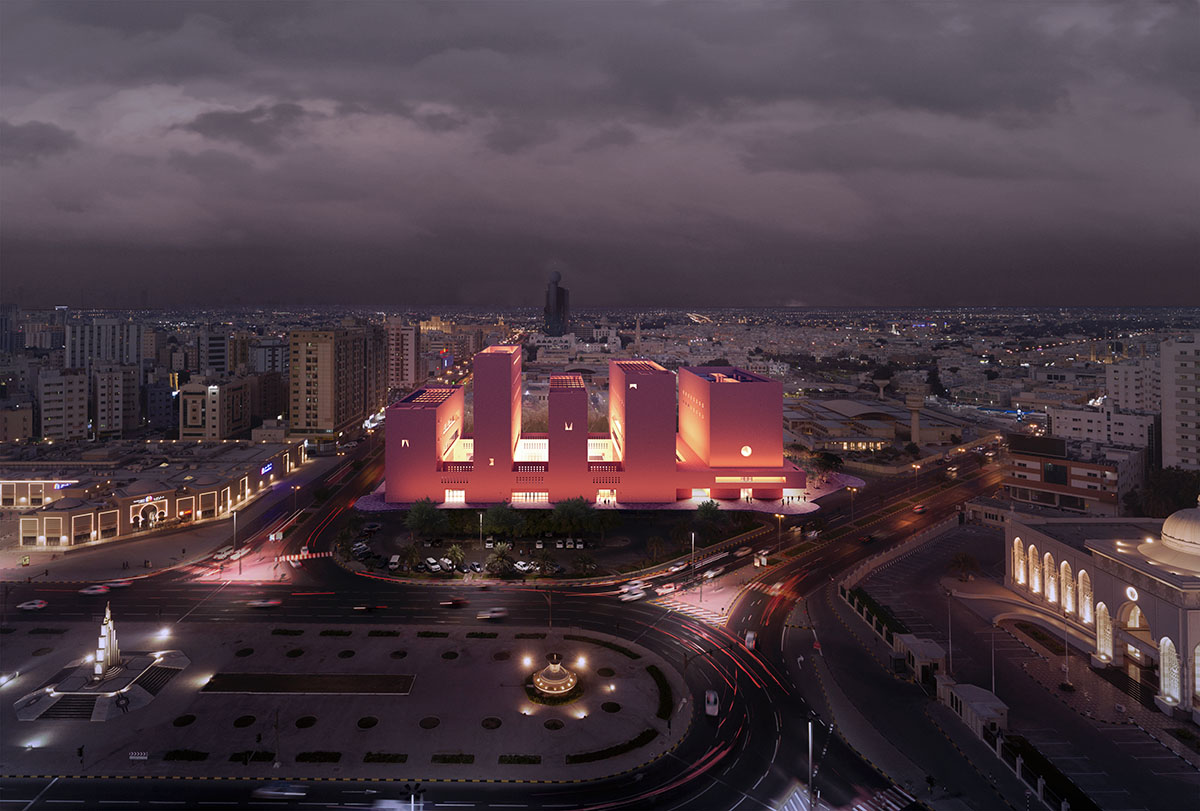 Supported by plinths and connected by a network of patios and support spaces, the interior spatial organization of the complex cultivates an interconnected atmosphere for intellectual exchange with unobstructed site lines across and in between the individual building blocks.

The campus building is scheduled for completion in 2023. 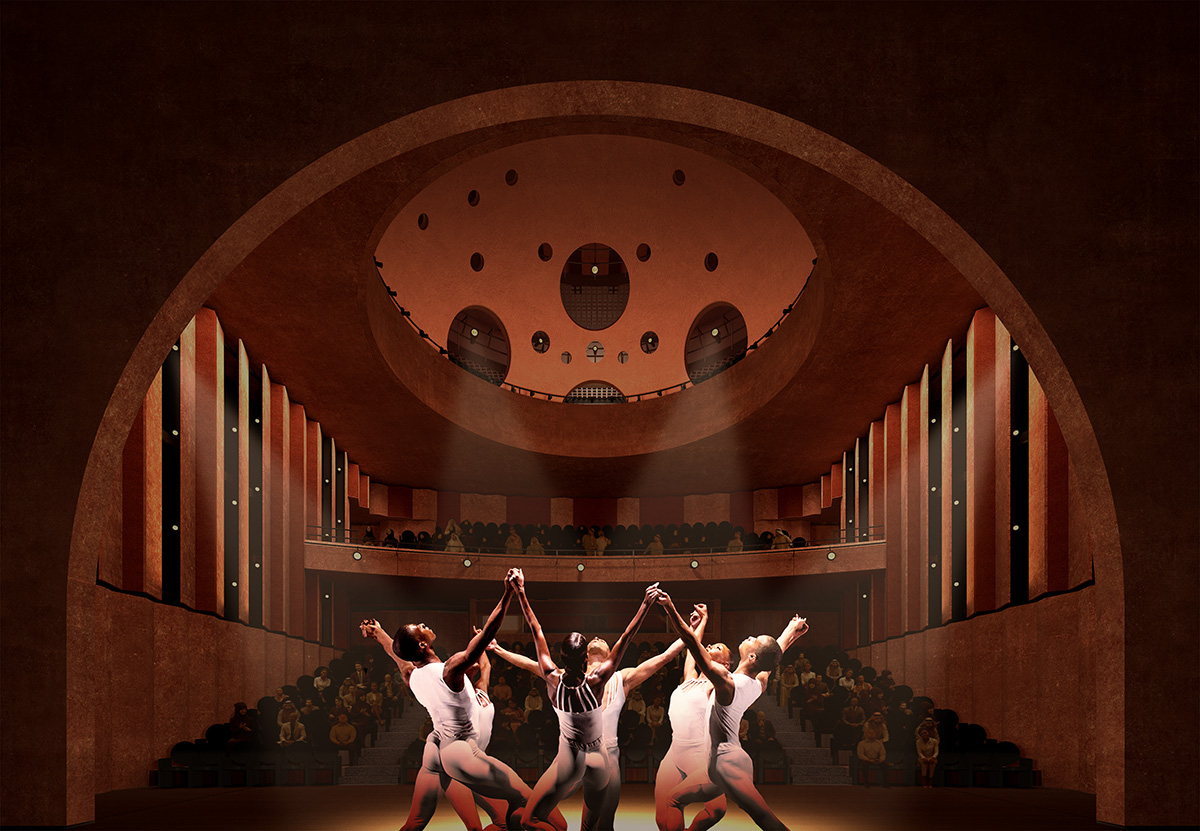 The Africa Institute was established in 2018 and is an interdisciplinary academic institute and research center dedicated to the study and documentation of Africa and its diaspora. Beginning in 2023, the Institute will welcome its inaugural class of M.A. and Ph.D. students in the field of African and African diaspora studies and also launch certificate programs in African languages, helping shape the next generation of leaders in the field.