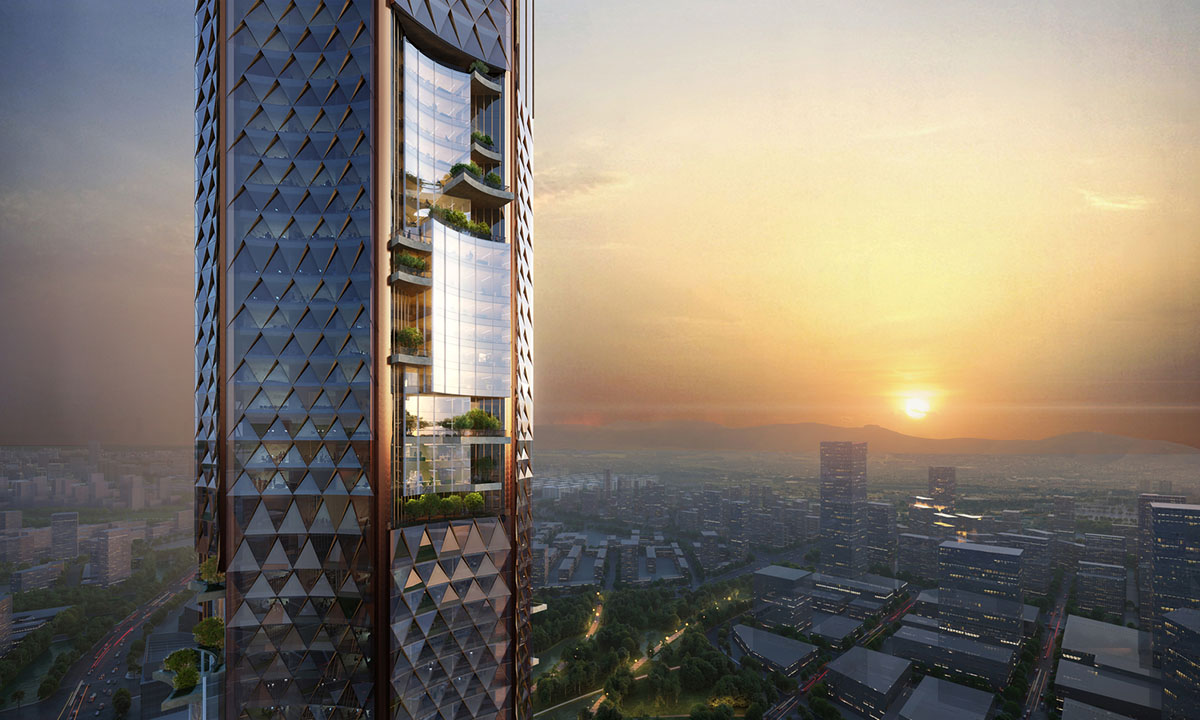 Called Nanjing Nexus, the mixed-use skyscraper will be added as a new icon to Nanjing’s new urban identity.

Set to be located in a pivotal site near the Yangtze River, having a pivotal position within the Yangtze River Economic Belt, the new Nanjing Jiangbei New Financial Center will merge local tradition and culture with a futuristic vision. 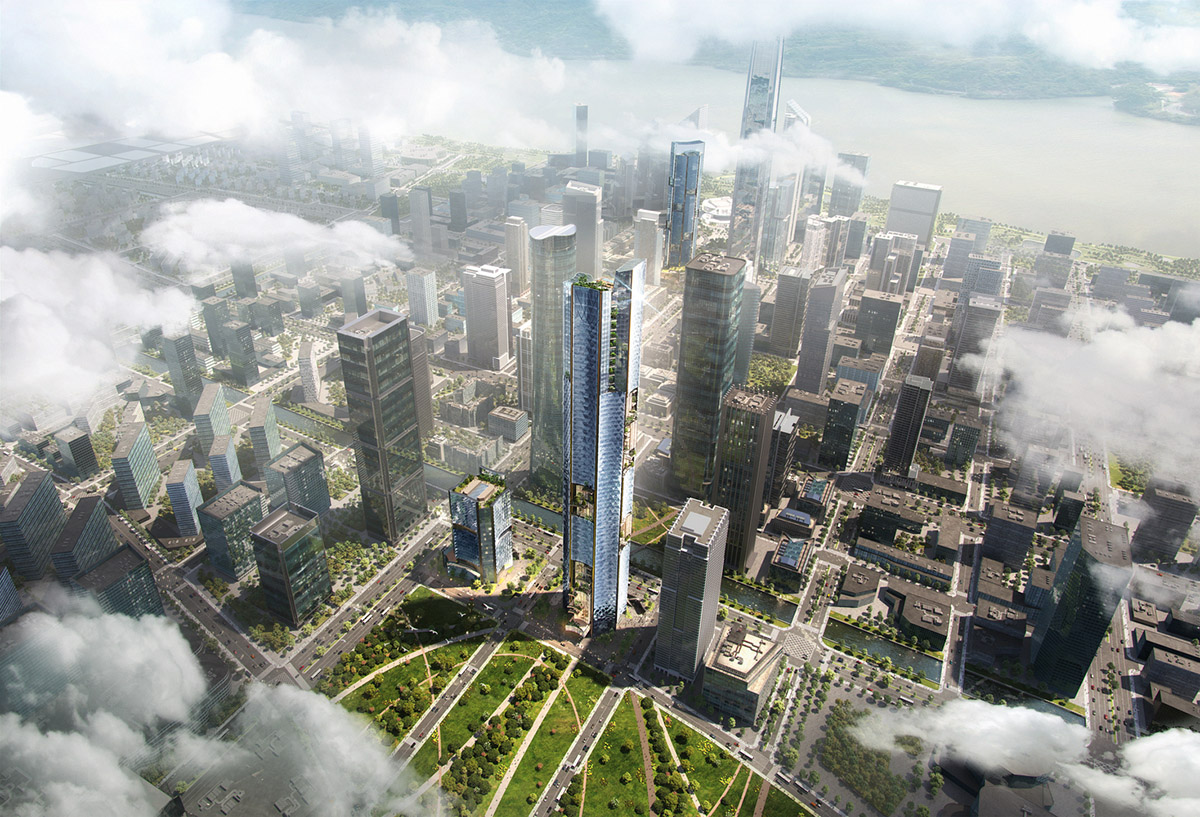 Ole Scheeren’s design was chosen as the winning project by an international jury. The jury praised the scheme for "its qualities in creating a future landmark of the city through a relationship between local culture, landscape, and the river", stated in a press release. 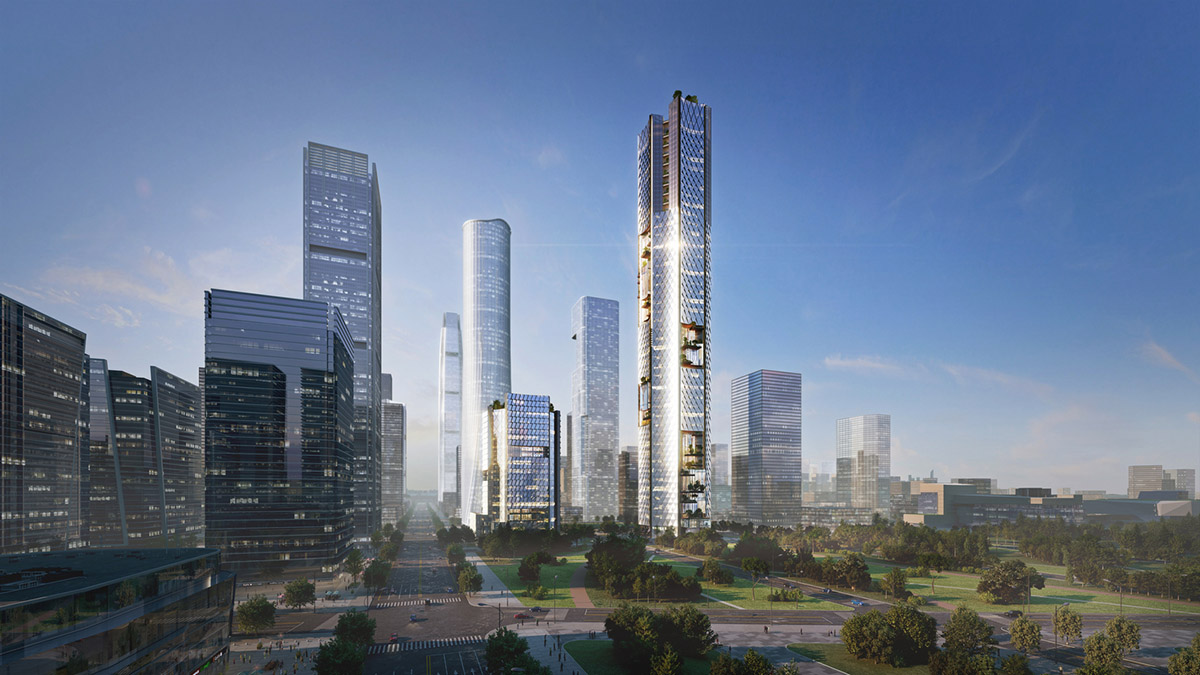 Challenging to the traditional skyscraper typologies, the architectural form of the skyscraper is informed by the typical rectangular tower.

To create an octagonal geometry, the studio trims its shaft in the middle into an octagon and carves each facet into a concave bay, embracing the energy of the context, and embracing the surrounding city.

The eight bays are horizontally split and vertically shifted to create offsets and form a skyline, with large Urban Windows that open up to accommodate diverse programs. 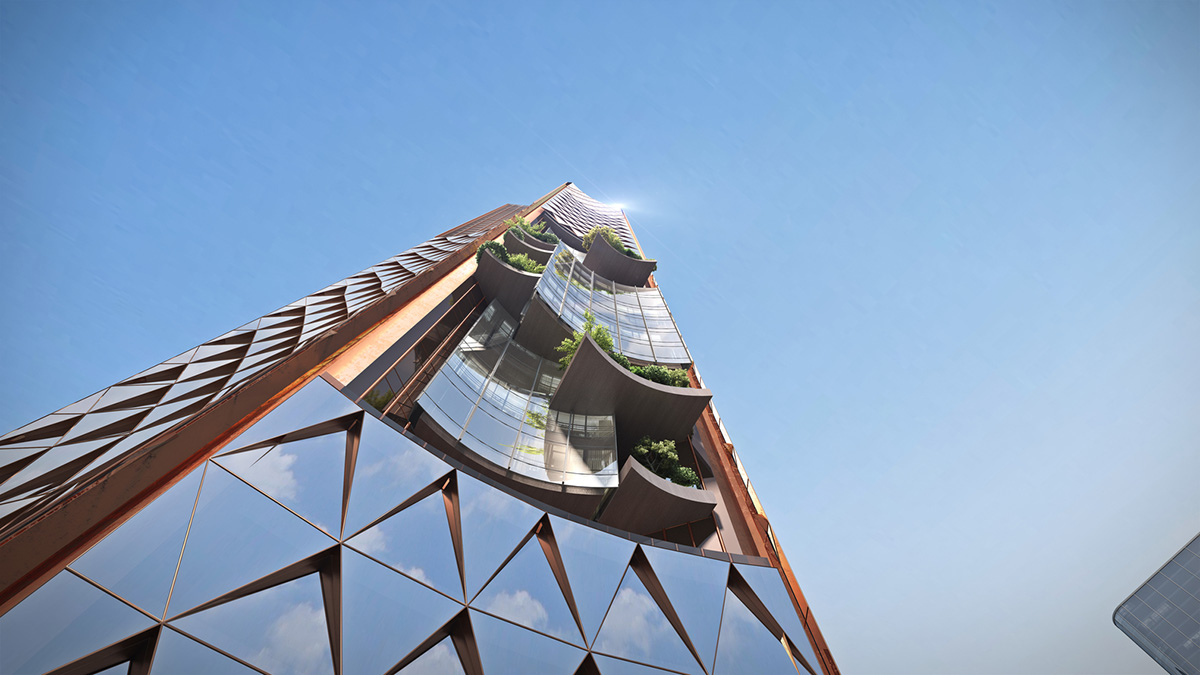 "Ole Scheeren creates a dialogue between the small scale of a historic village and the large scale of the vertical, contemporary city, uniting them by converging history and modernity in a new whole," stated the press release.

As common in Ole Scheeren's designs, the studio adds abundant vegetation for the Urban Windows that can turn into vertical gardens, and according to the studio, "it is a contemporary interpretation of the garden culture and pavilions of the Jiangsu province." 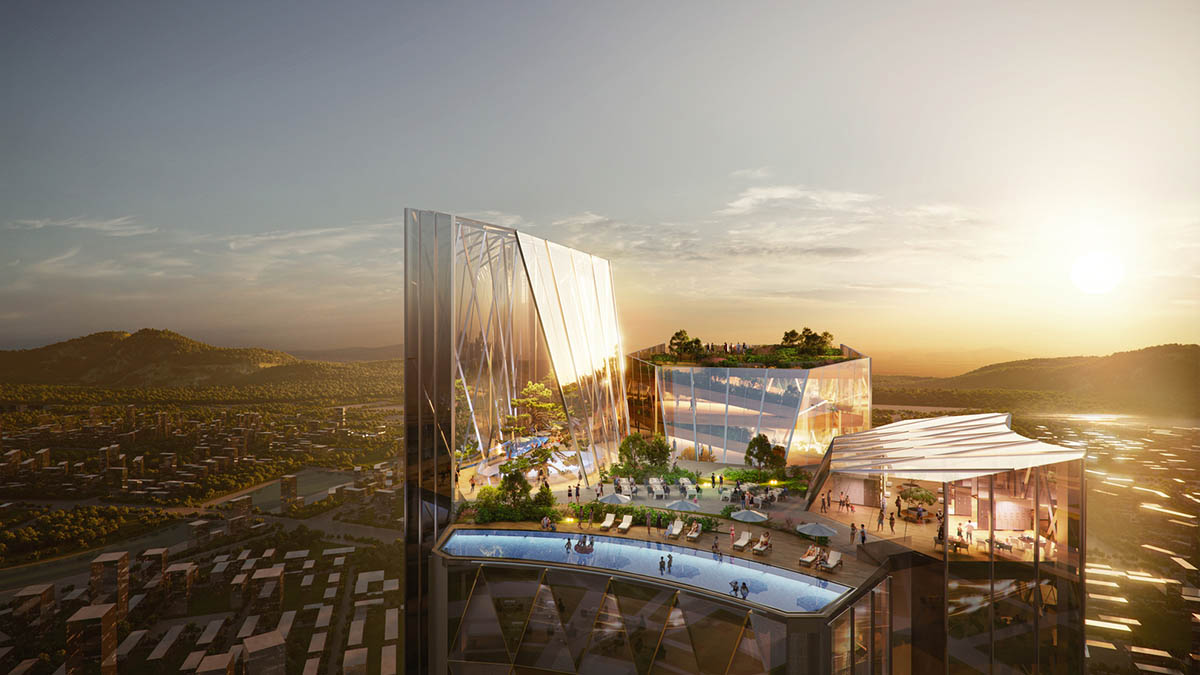 The addition of abundant vegetation in the tower serves for sustainability strategies on multiple levels, such as ecological, social but also historical.

"Nanjing Nexus is a building that explores the question how contemporary architecture can absorb, and in fact amplify, historical context and meaning by fusing the qualities of the past with the requirements of a future-oriented workspace within the verticality of a super-tall office tower," said Ole Scheeren, principal of Büro Ole Scheeren.

"The convergence of past and present is not merely about formal gestures – it is about creating actual experiences and spaces with specific emotive and experiential qualities," Scheeren added. 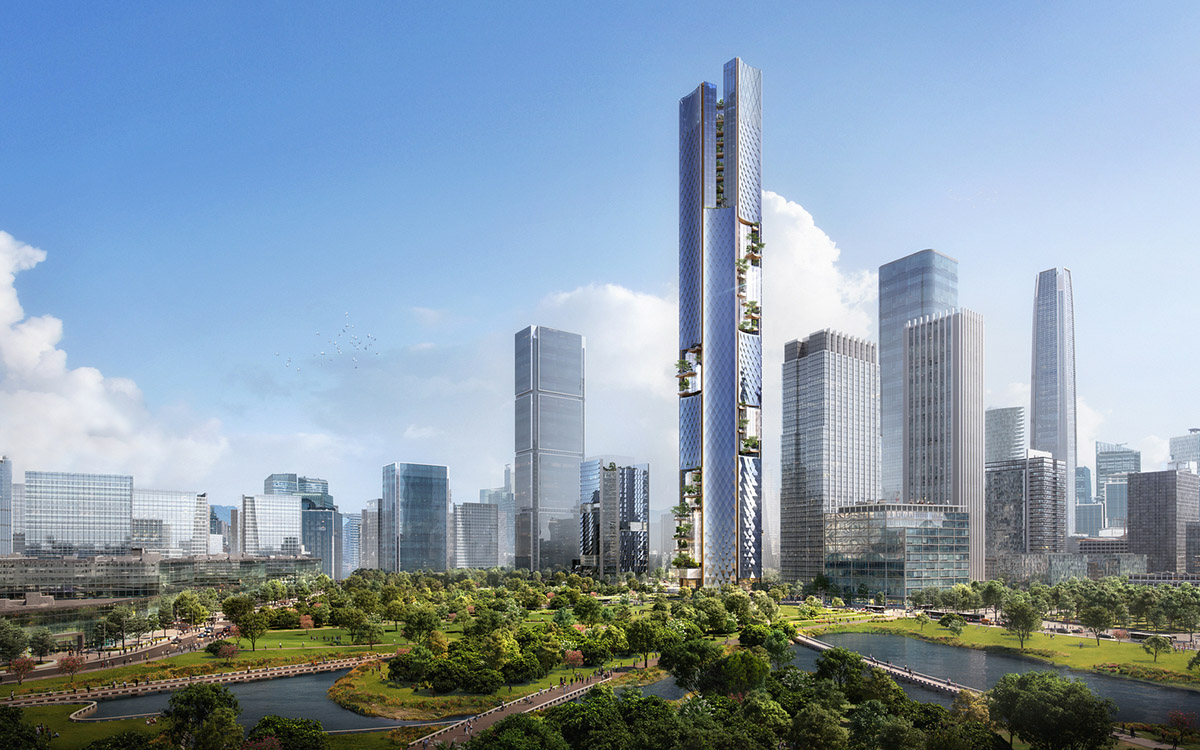 At the top of the tower, the hotel provides multi-directional views and offers a spectacular roof terrace, pool deck, restaurant, and gardens – a public space 350 meters above the city. 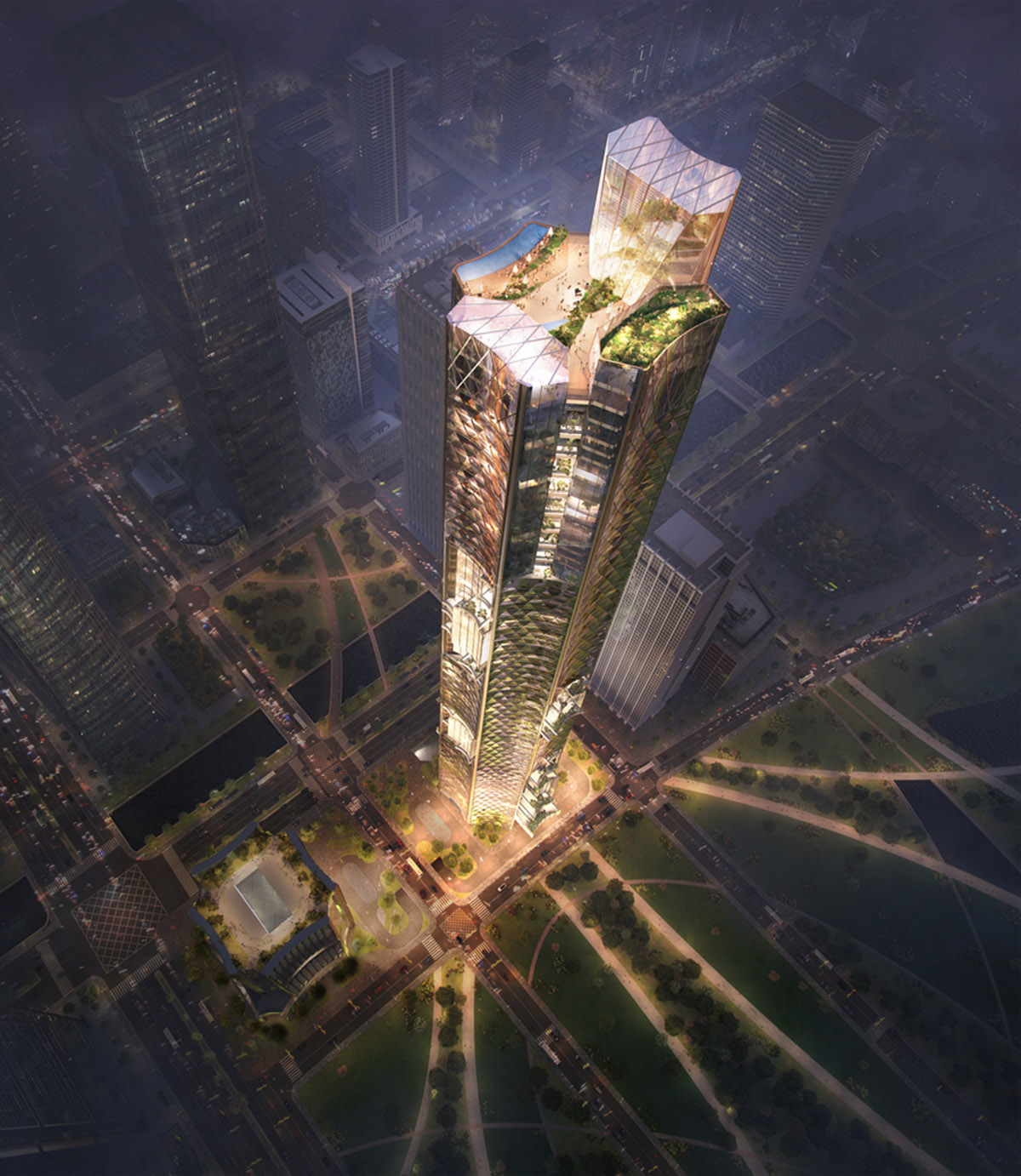 The reason of choosing concave surfaces and the three-dimensionally textured facade is to optimize the building’s solar performance and reduce structural wind loads.

Through its shimmering façade it will reflect light in reminiscence of the sparkles and ripples of the Yangtze River’s waves. 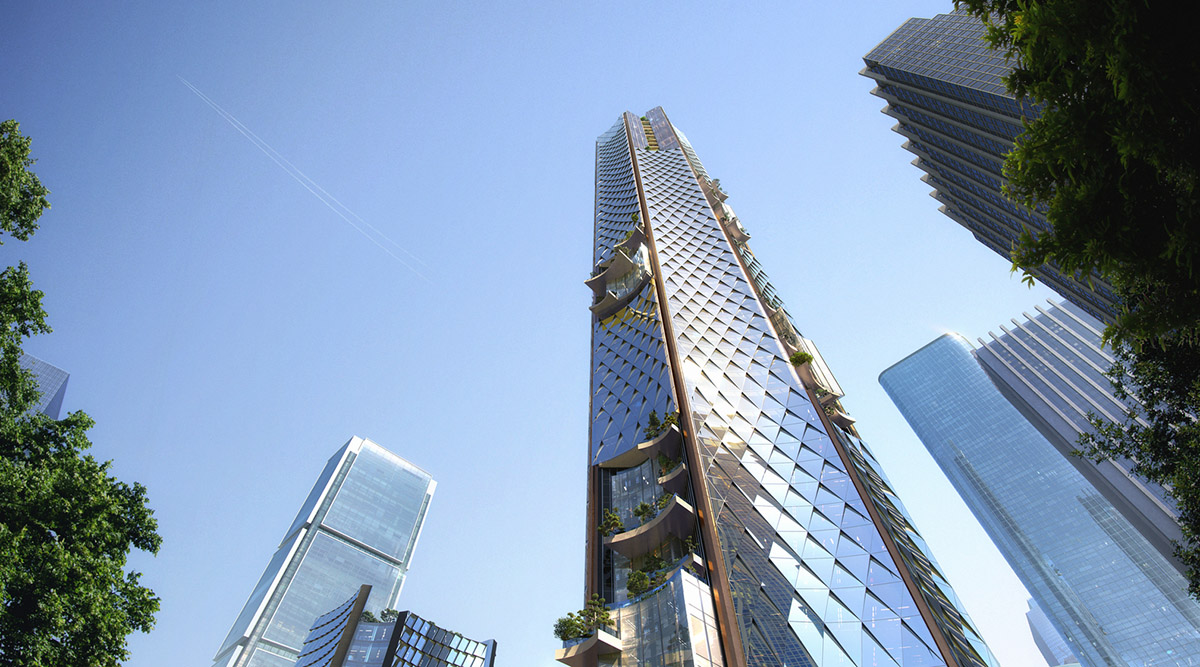 "It’s immediate neighbor, a 100-meter-tall satellite tower, is conceived as an adaptation of the octagonal figure to create a small-scale version of the super-tall tower. Together, they form a new landmark in Jiangbei’s future district of Nanjing," the firm added. 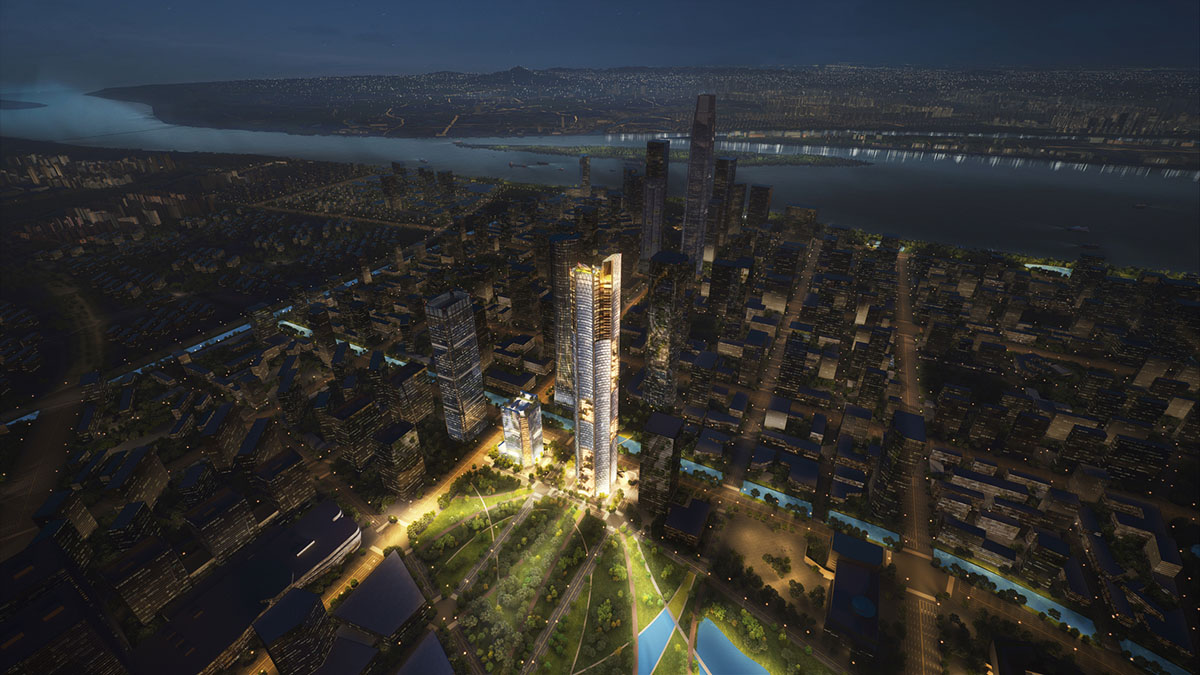 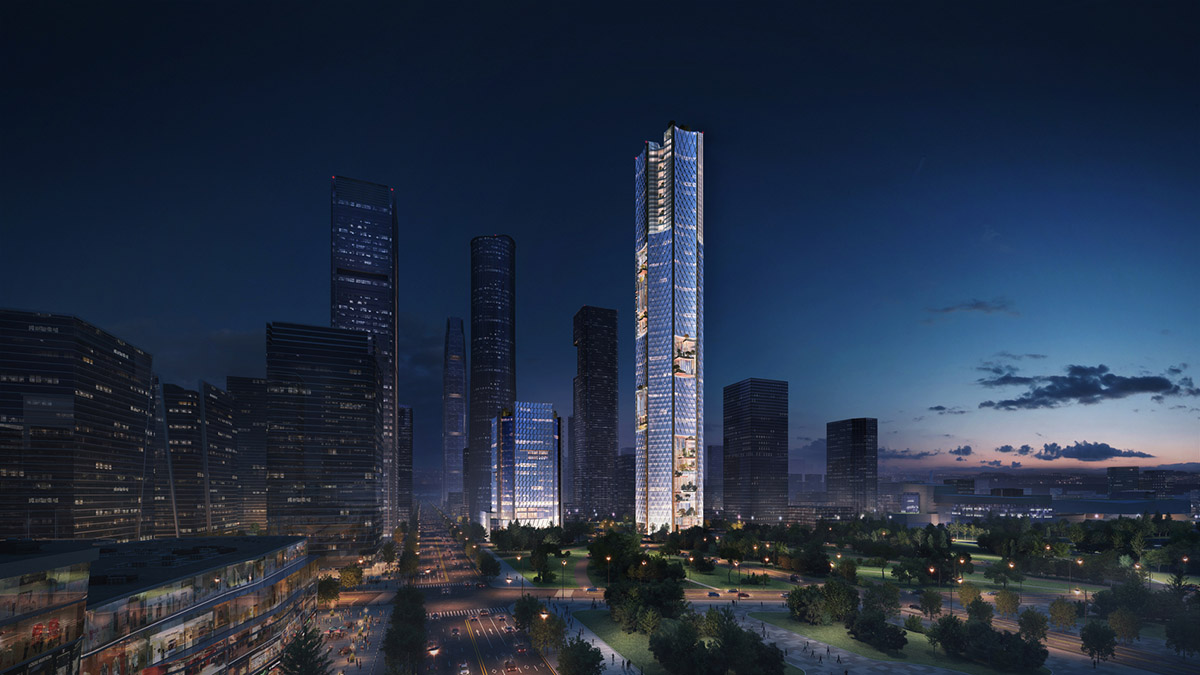 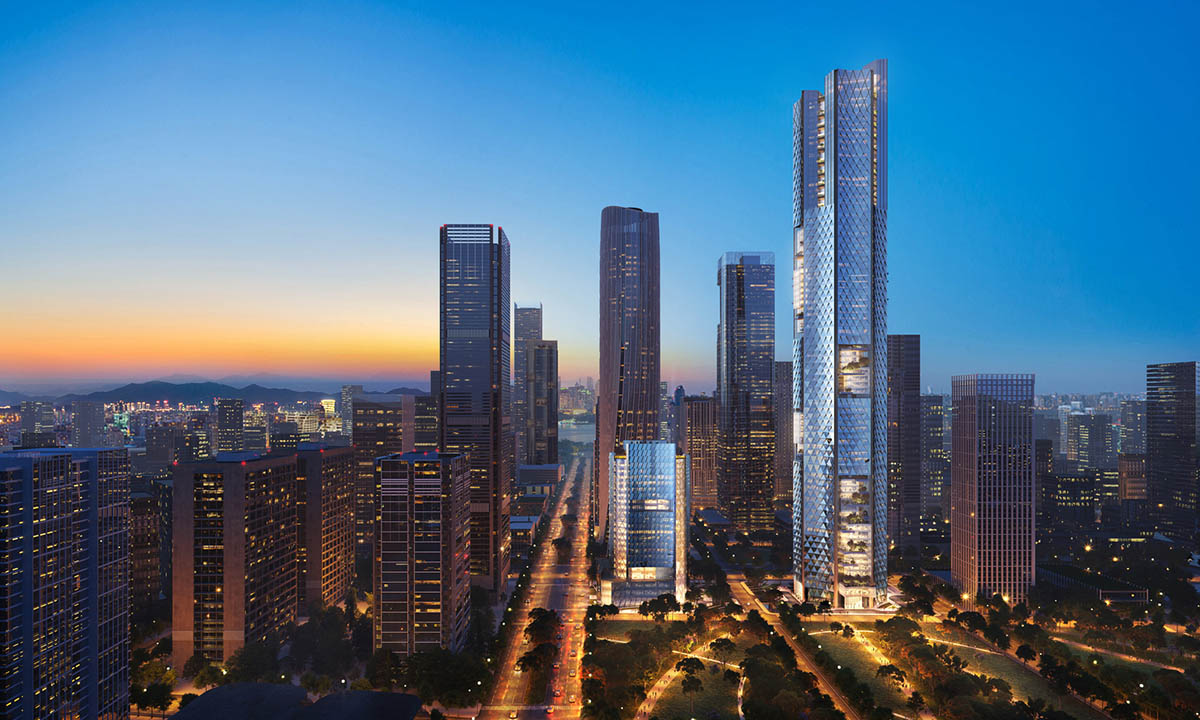 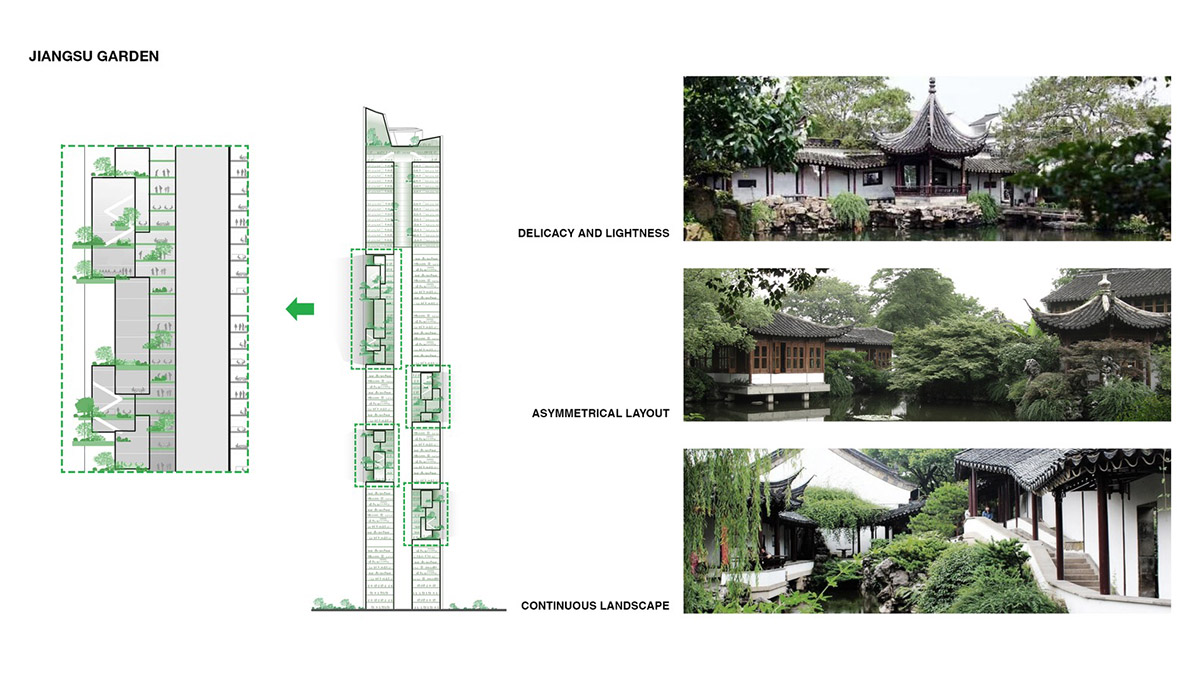 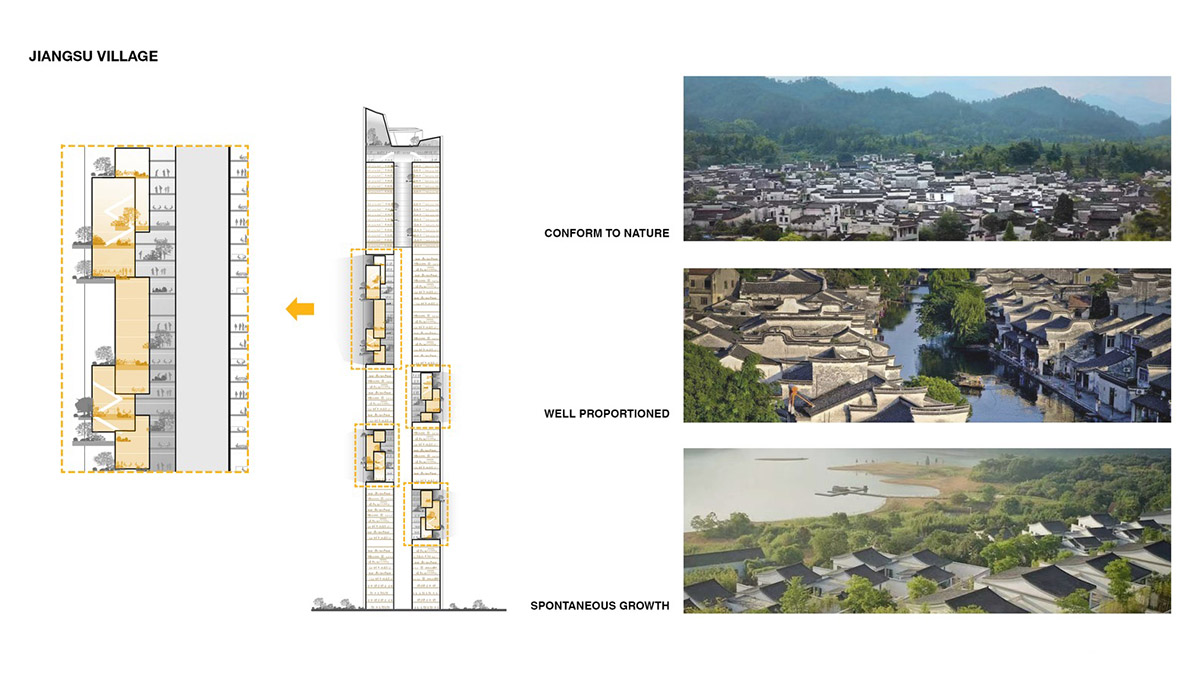 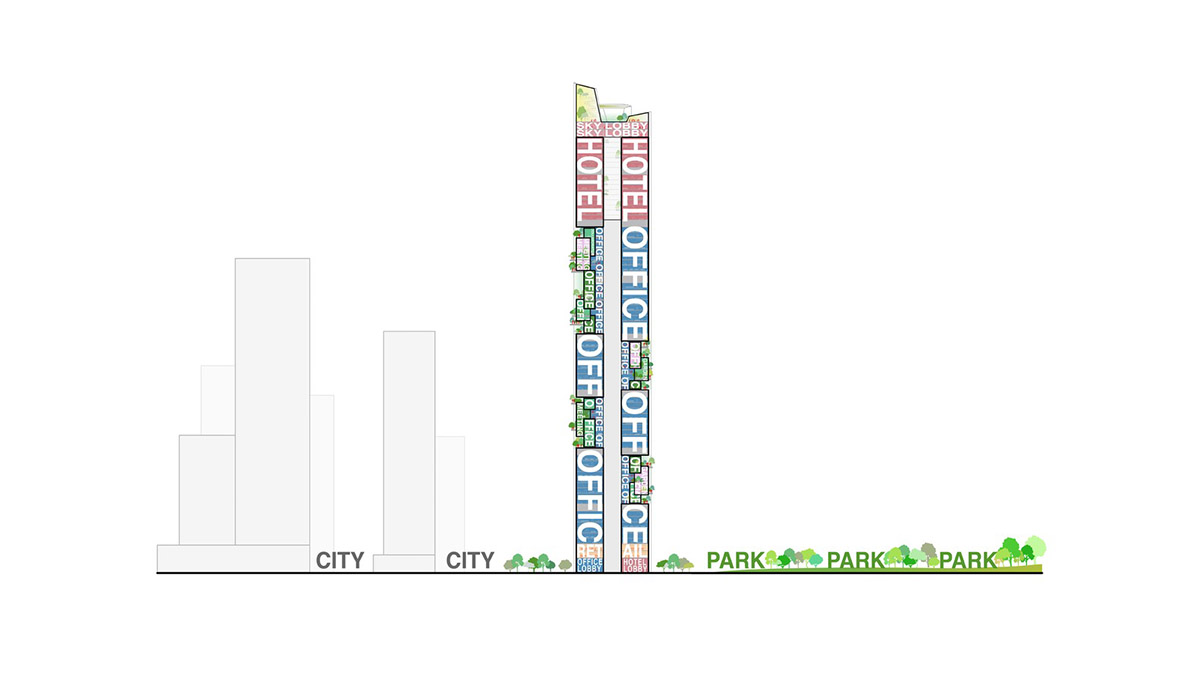 Büro Ole Scheeren is designing a new vertical tropical resort in China's beach resort Sanya, with a new hotel resort in Cebu in the Philippines.

Residential complex The Interlace in Singapore is one of the key projects of Büro Ole Scheeren completed in 2013.

Rustic Canyon designed by Walker Workshop features light-filled and creamy interiors in Los Angeles
May 13, 2022 • 1293
World Architecture Festival and World Festival Of Interiors open for entries for Its 2022 edition
May 09, 2022 • 1101
Kengo Kuma and Associates designs commercial building covered by plants in downtown San Jose
May 09, 2022 • 1067
Morphosis' University of Texas, a new arts campus breaks ground at Dallas
May 12, 2022 • 1049
Atelier ITCH designs white brick house for live and work on a triangular site in South Korea
May 18, 2022 • 858
Field Conforming Studio installs steel sculpture with nine hollow columns in Tangshan
May 11, 2022 • 822