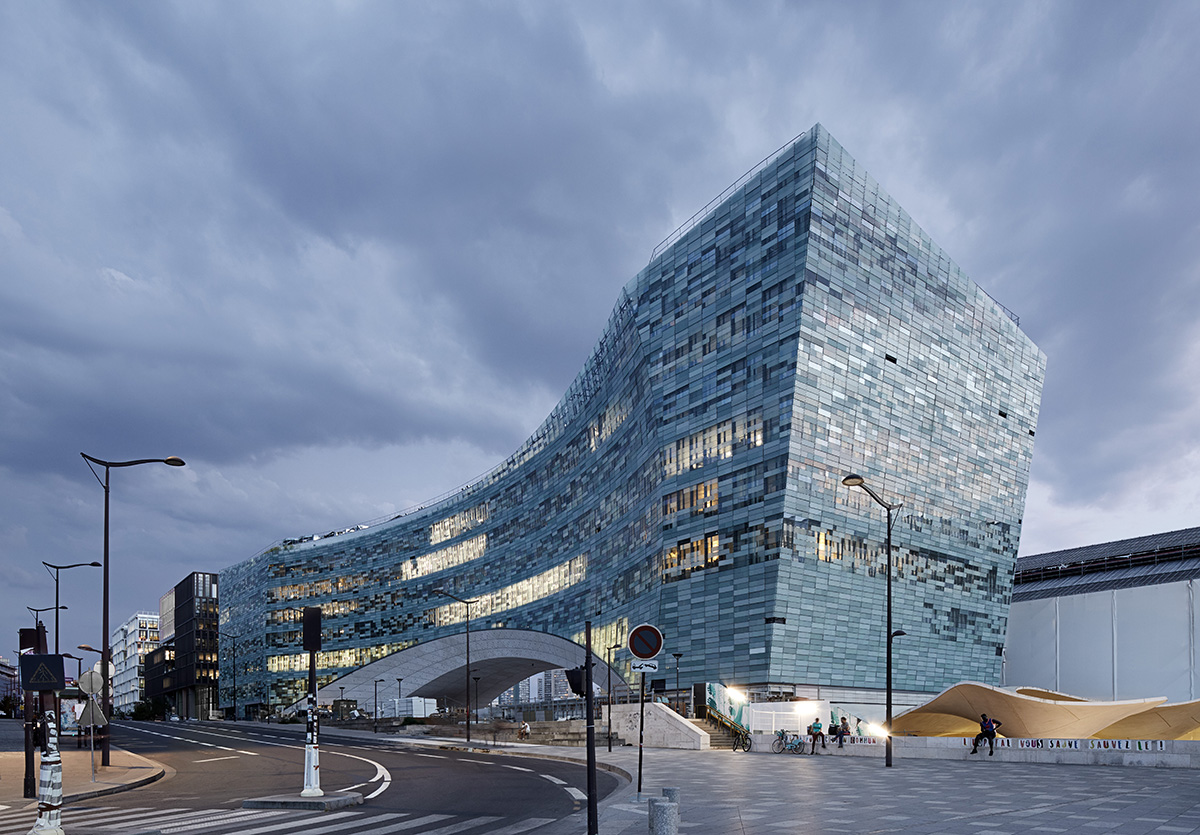 Officially opened to the public in Paris, the new headquarters houses 1,600 employees of the Le Monde Group under the same roof in a generously arching building on 67-69 Avenue Pierre-Mendès-France in the 13th arrondissement of Paris.

The 23,000-square-metre building is marked with its bold new plaza and semi-transparent outer skin featuring a pixelated configuration, the building creates connections to the general public and surrounding transit while also offering citizens and passersby a generous respite in the city. 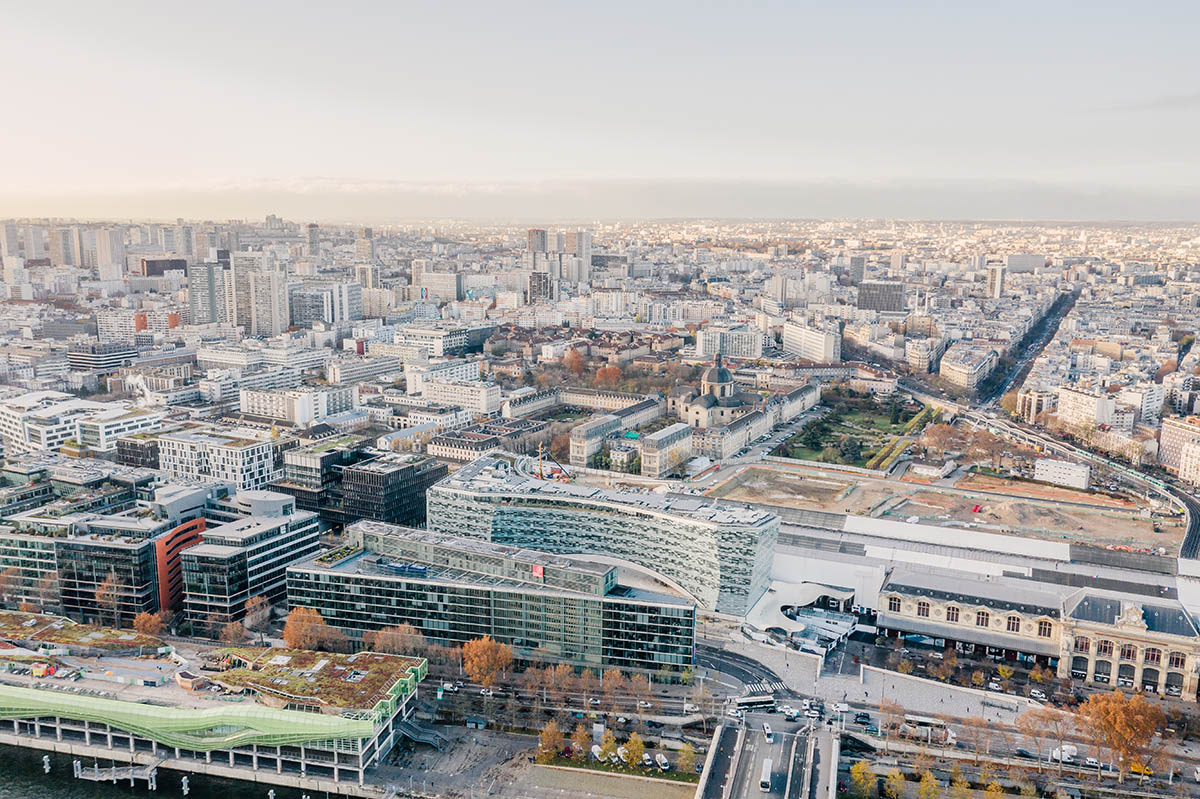 Presenting a translucent, dynamic façade and expansive public plaza, the design expresses the building’s openness to its surrounding context.

"Since its inception the Le Monde Group Headquarters has embodied an architectural and symbolic counterpoint to the many challenges our societies face today," said Kjetil Trædal Thorsen, founding partner of Snøhetta.

"The building is primarily about opening up in a time where fear and uncertainty pushes our societies to increase barriers and strengthen security enforcement. In this sense, the project invites us to reflect on how architecture can create spaces that can be both public and private, exterior and interior, transparent or opaque." 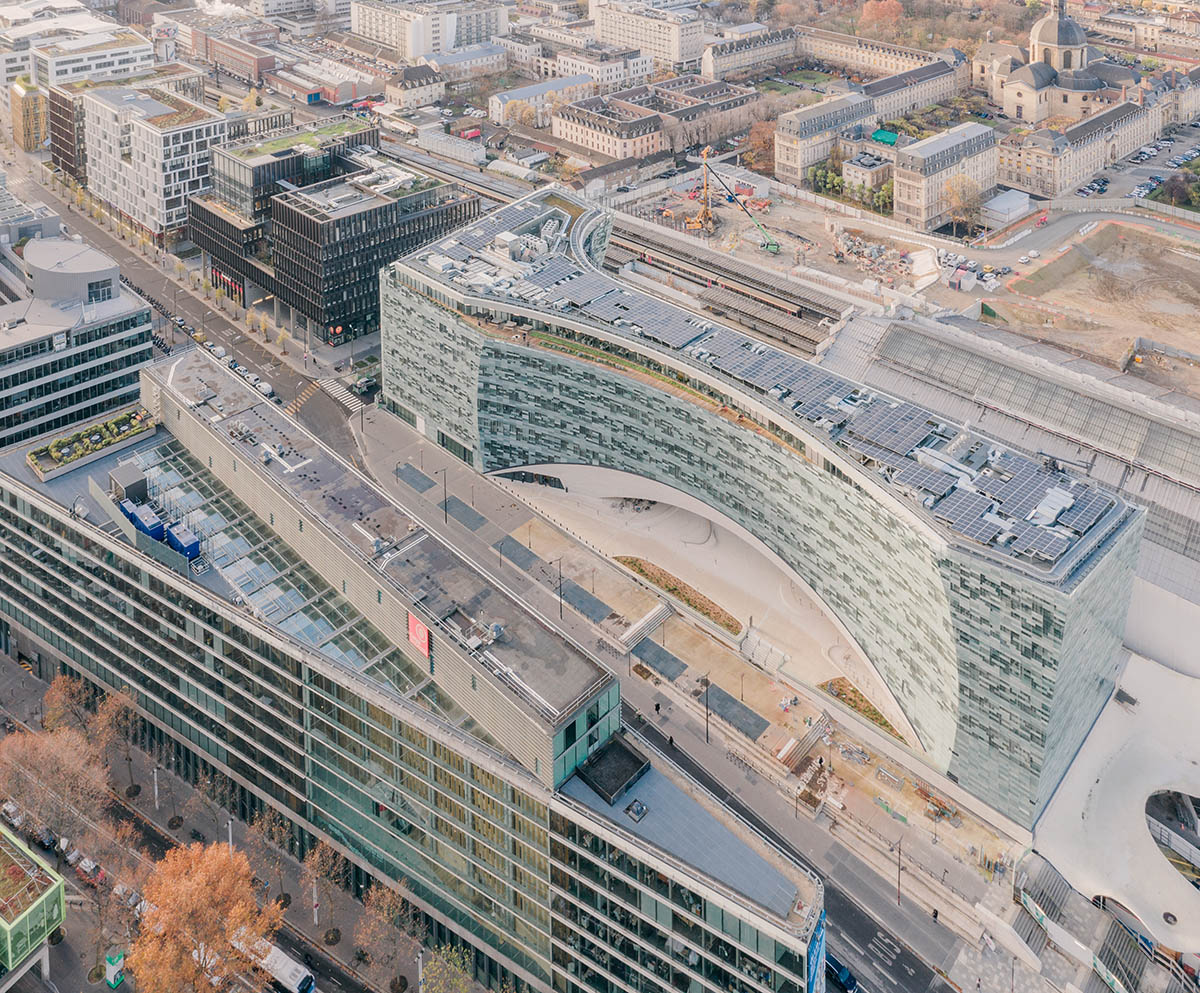 "Like so many other of our projects, it is a hybrid building that explores the interstices of architecture and that is conceived to be at the service of the public," he added. 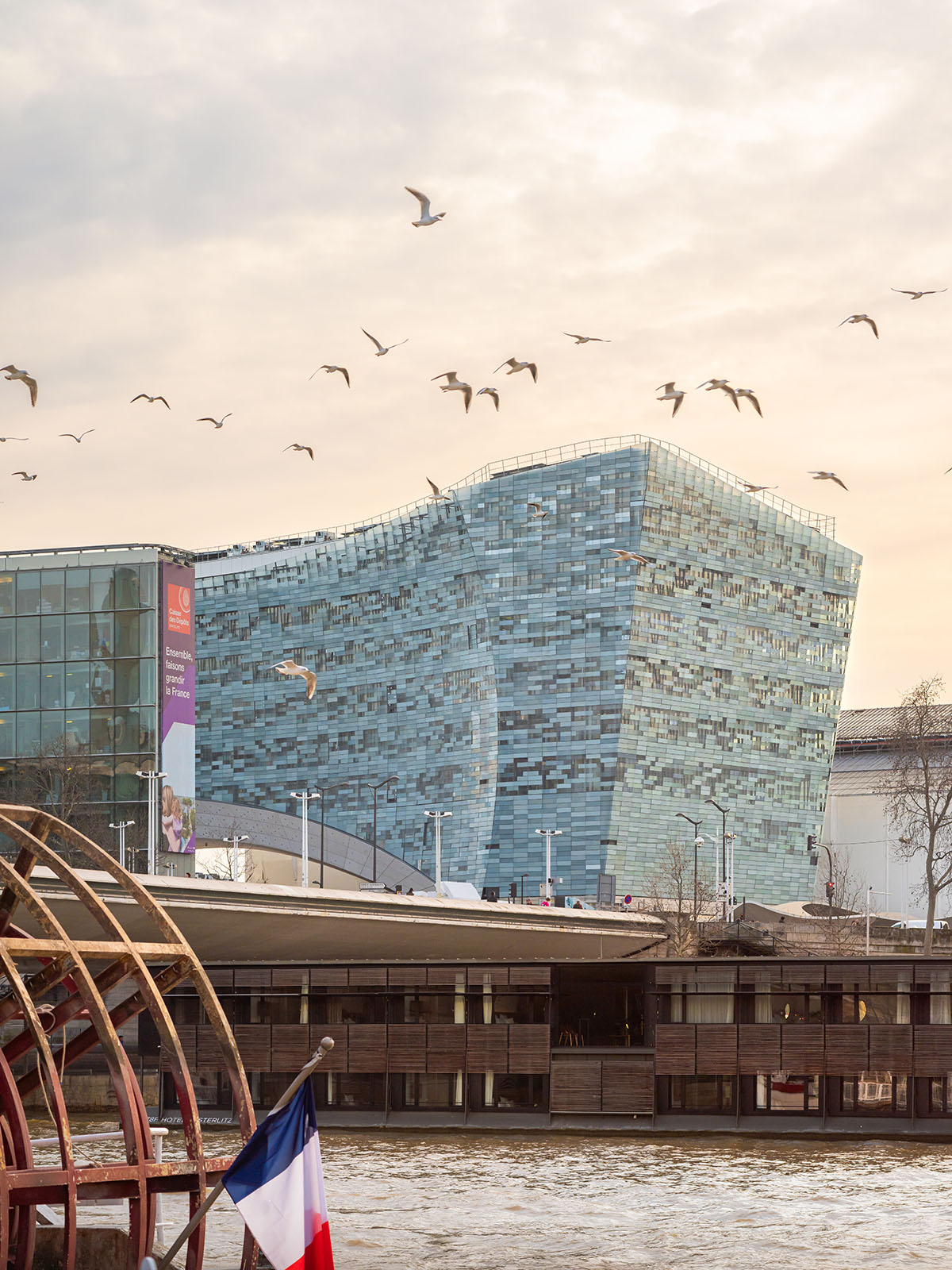 The concave form of the building bridges over the below-grade railyard, anchored on both sides with two seven-story cantilevering volumes held together by a complex network of steel.

Three gestural "cuts" shape the building mass: the "sky cut" reveals the oblique surface of the solar-panel-clad roof; the "city cut" pulls the building back from the along its street-facing facade; and the "ground cut" carves out the underside of the bridging structure, enveloping the new public plaza together beneath its expansive arched form. "I am happy the Le Monde Group has chosen the heart of the Paris Rive Gauche district as home for its new headquarters, and by doing so, contributing to the district’s transformation," said the Mayor of Paris, Anne Hidalgo.

"Besides the building’s magnificent architecture, the project’s openness to its surroundings will make it an integral part of everyday life, both for the district’s inhabitants and the 13th arrondissement. At a time where information and dialogue are more essential than ever, my hope is that the 67-69 Avenue Pierre-Mendès-France becomes the heart of this exchange, promoting transparent and accessible information for all." 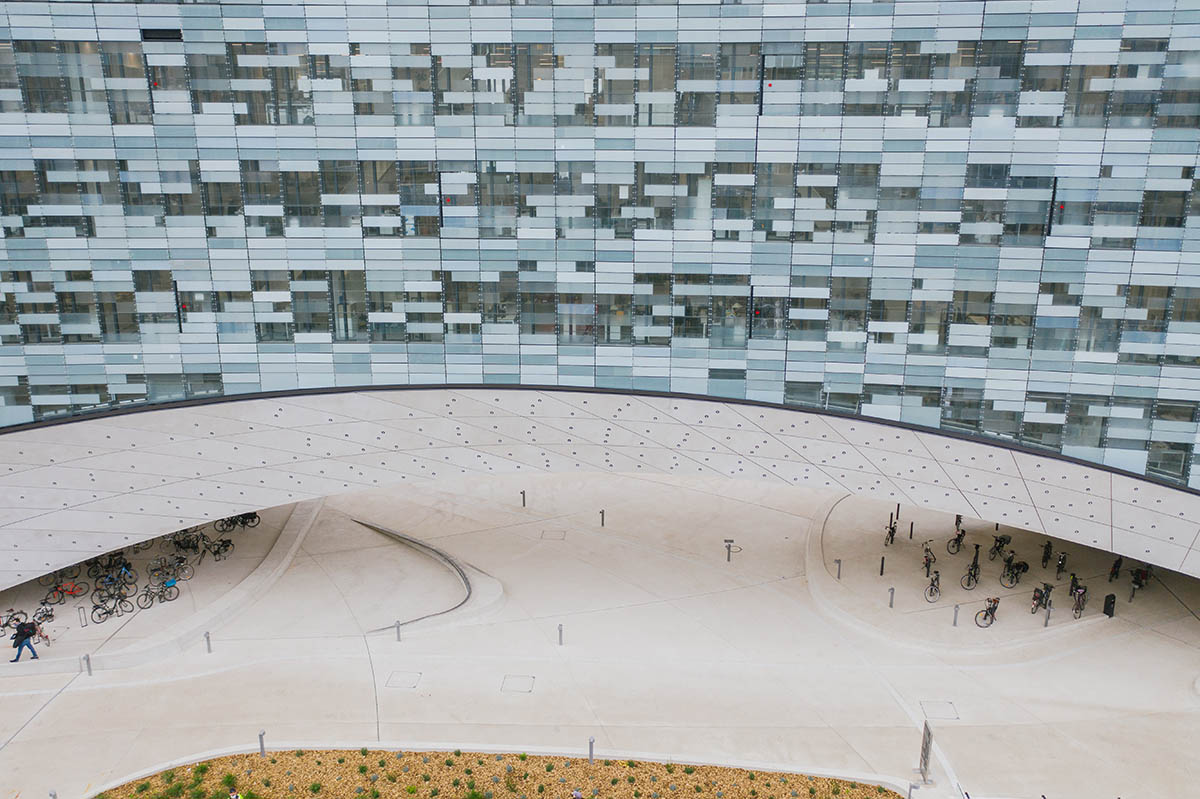 "Indeed, the project itself emerged from a moment when these priorities were called into question," said Snøhetta.

"As the Le Monde Group deliberated over architectural proposals for their future home in early 2015, just days after the attacks on Charlie Hebdo Magazine’s headquarters, they ultimately selected Snøhetta and local partner SRA Architecture's design, opting for a building that remains in open dialogue with the city of Paris and its inhabitants."

For the facade of the building, Snøhetta created an outer skin which is composed of more than 20,000 pixelated glass elements in a strictly organized pattern with 772 possible configurations, that give the building a sheer appearance that shifts with the changing weather and light conditions. The concrete plaza and elements from the façade continue inside the building. 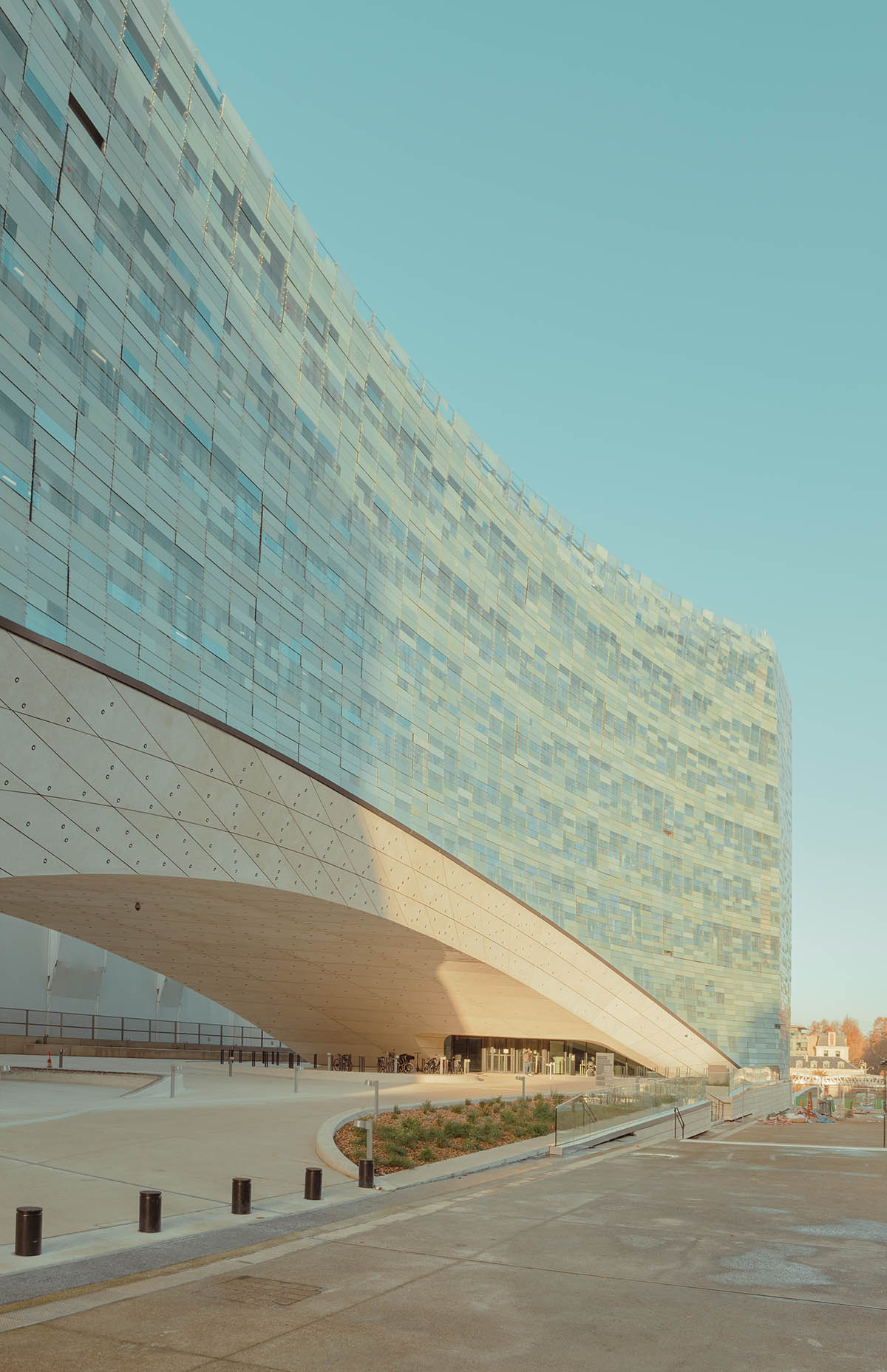 The building’s wayfinding, which is also developed by Snøhetta, is inspired by the glazed facade of the building and adorned with classic typewriter typography. This custom wayfinding guides visitors and staff effortlessly through the building. 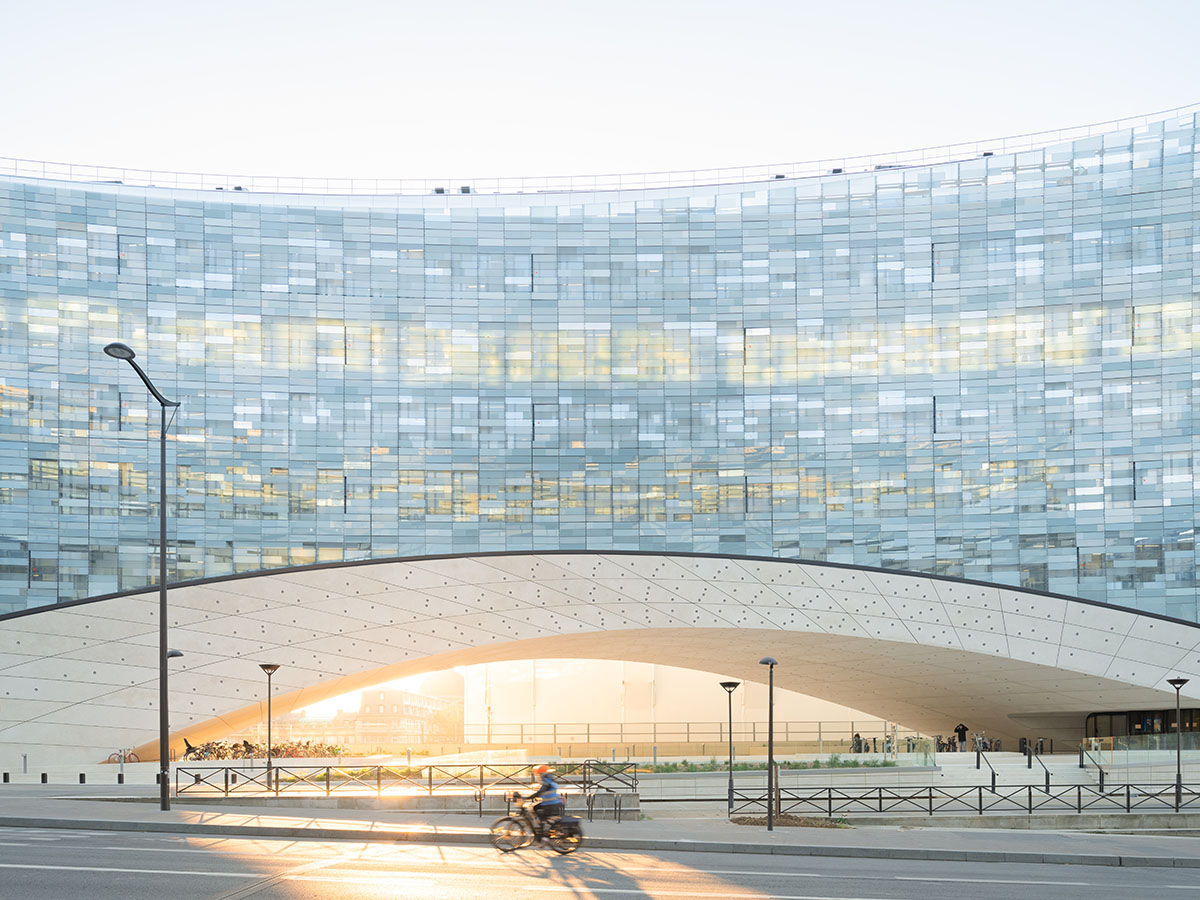 Each glass element represents one distinct pixel classified on an opacity scale ranging from transparent to fully opaque depending on its placement, allowing for the best views from the building as well as a maximum of daylight penetration. This highly sophisticated pattern references the printed letters of newspapers and magazines and makes up a text-like pattern that can be read more clearly when the 10,000 square meters facade is seen from afar.

The journey through the Le Monde Group Headquarters commences at ground level where visitors are greeted by a broad public plaza with integrated vegetation. The plaza invites passersby to linger and interact while also creating connections to the cityscape on each side of the building. 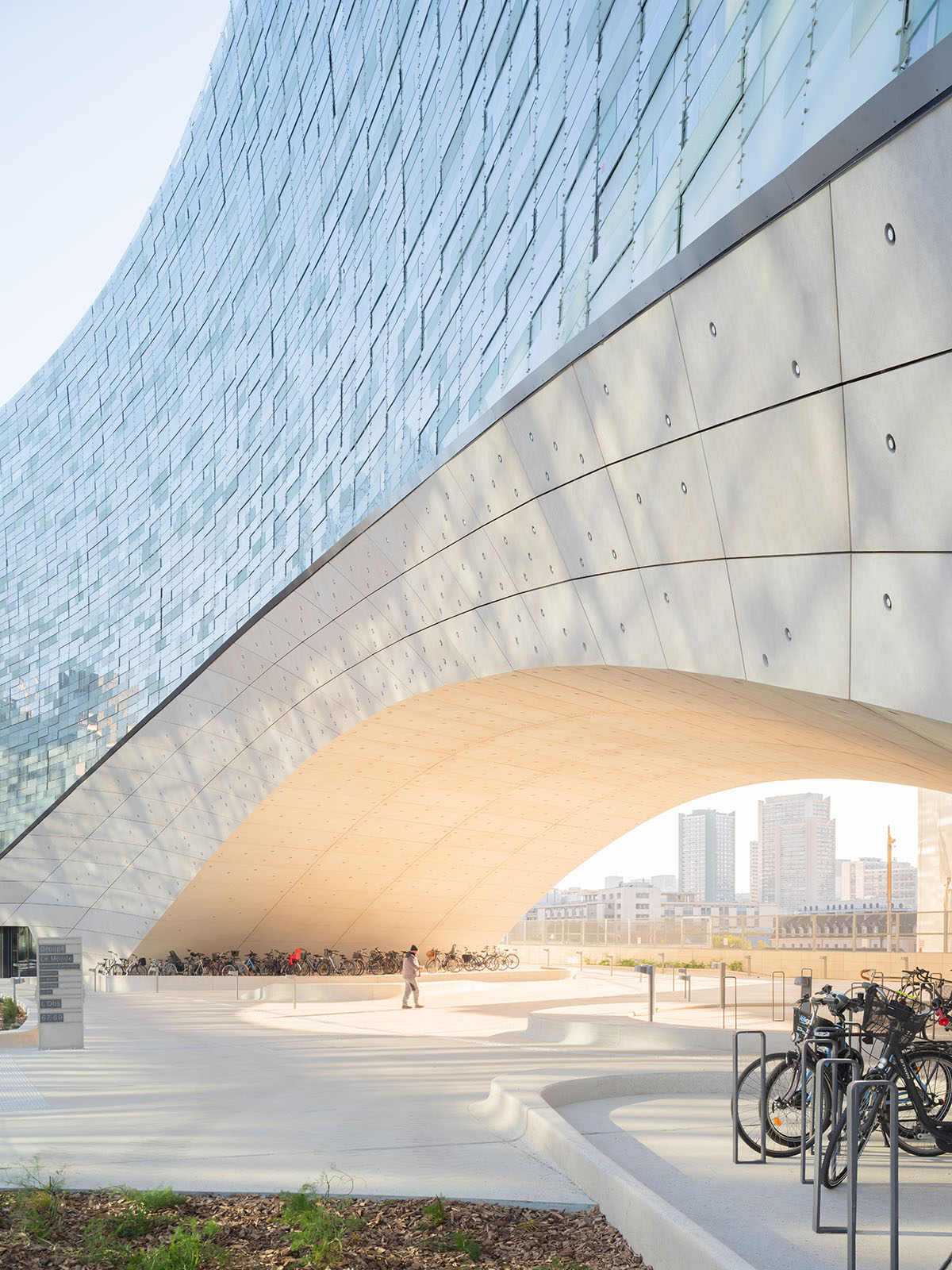 The Le Monde Group Headquarters can be accessed from the two extremities of the building, one of them public, leading to food and retail services and providing access to a two-story auditorium.

The other entry leads to a reception area for parts of the building which are only accessible to the Le Monde Group. The reception area reveals itself as a white canvas framed by a grey-scaled concrete terrazzo flooring that evokes the plaza outside. 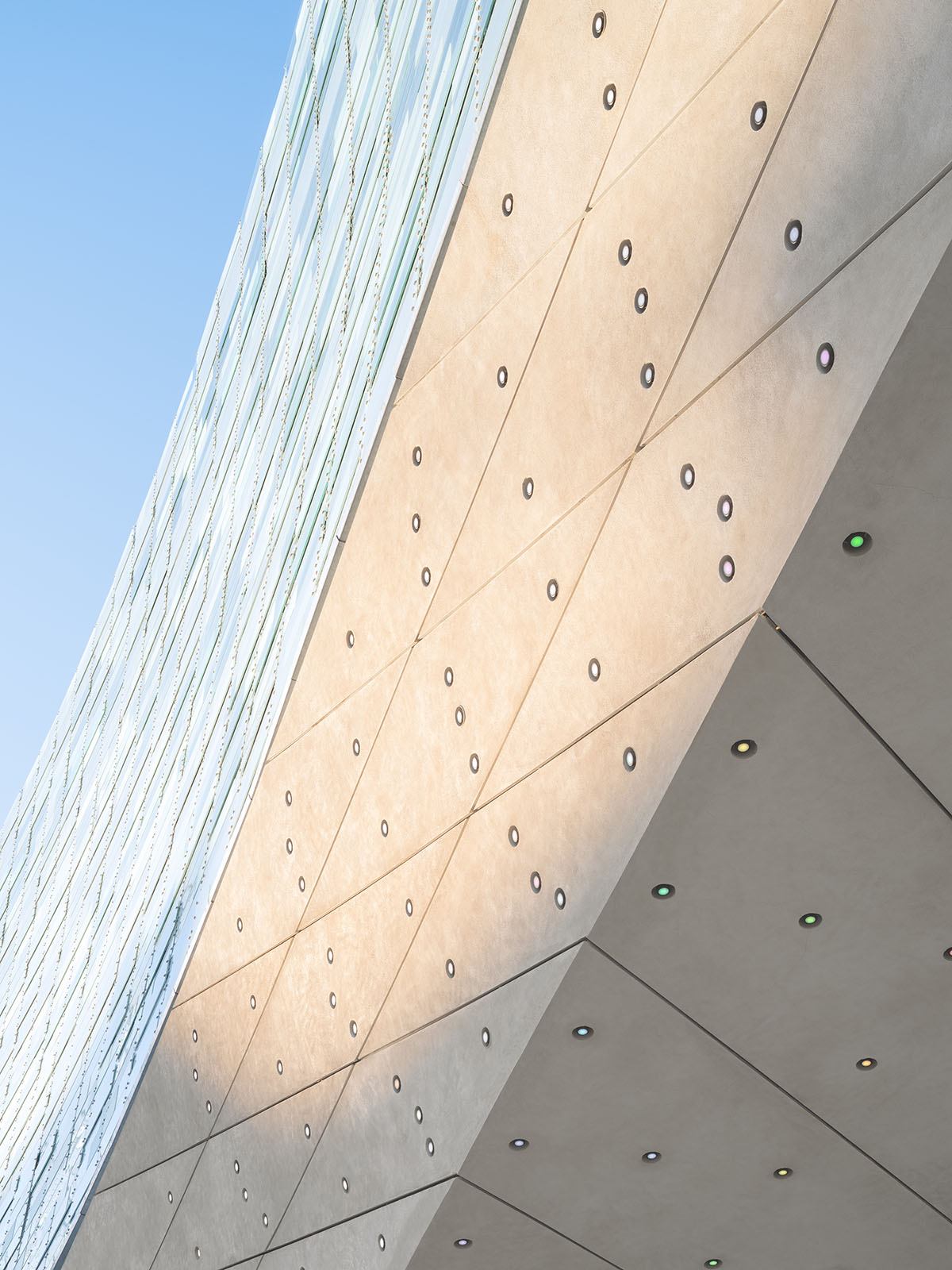 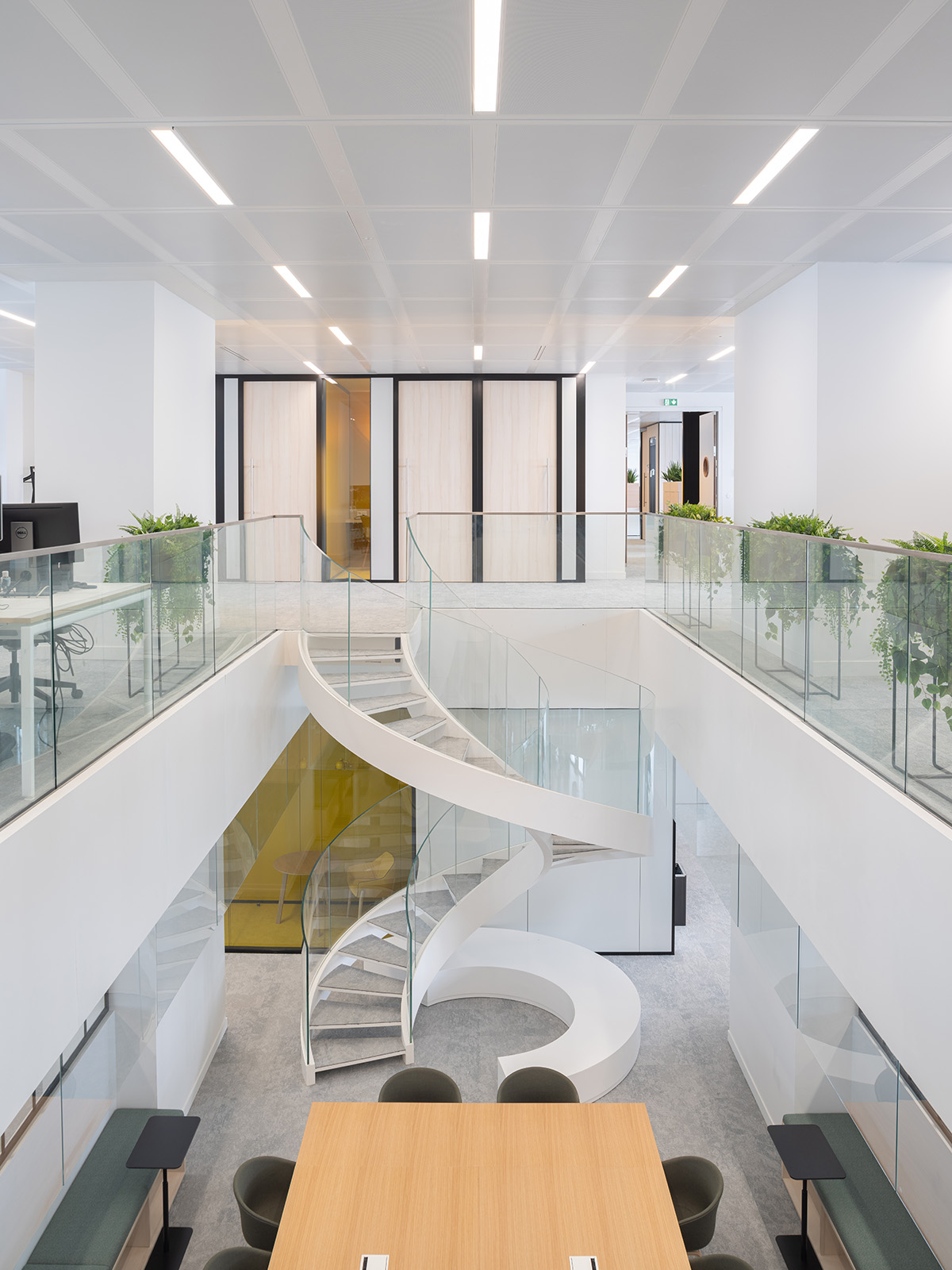 From the fifth to the sixth floor, there are office spaces dedicated to the Le Monde newsgroup. Just like the office floors below, the Le Monde offices are organized as an open space, while also offering a diversity of flexible workspaces that integrate over 100 private work areas and over forty meeting rooms for group collaboration.

On the top level of the building, it leads out to an open-air terrace which is accessible from both sides of the building. Framed by vegetation, the terrace creates beautiful views overlooking the surrounding cityscape and the Seine. 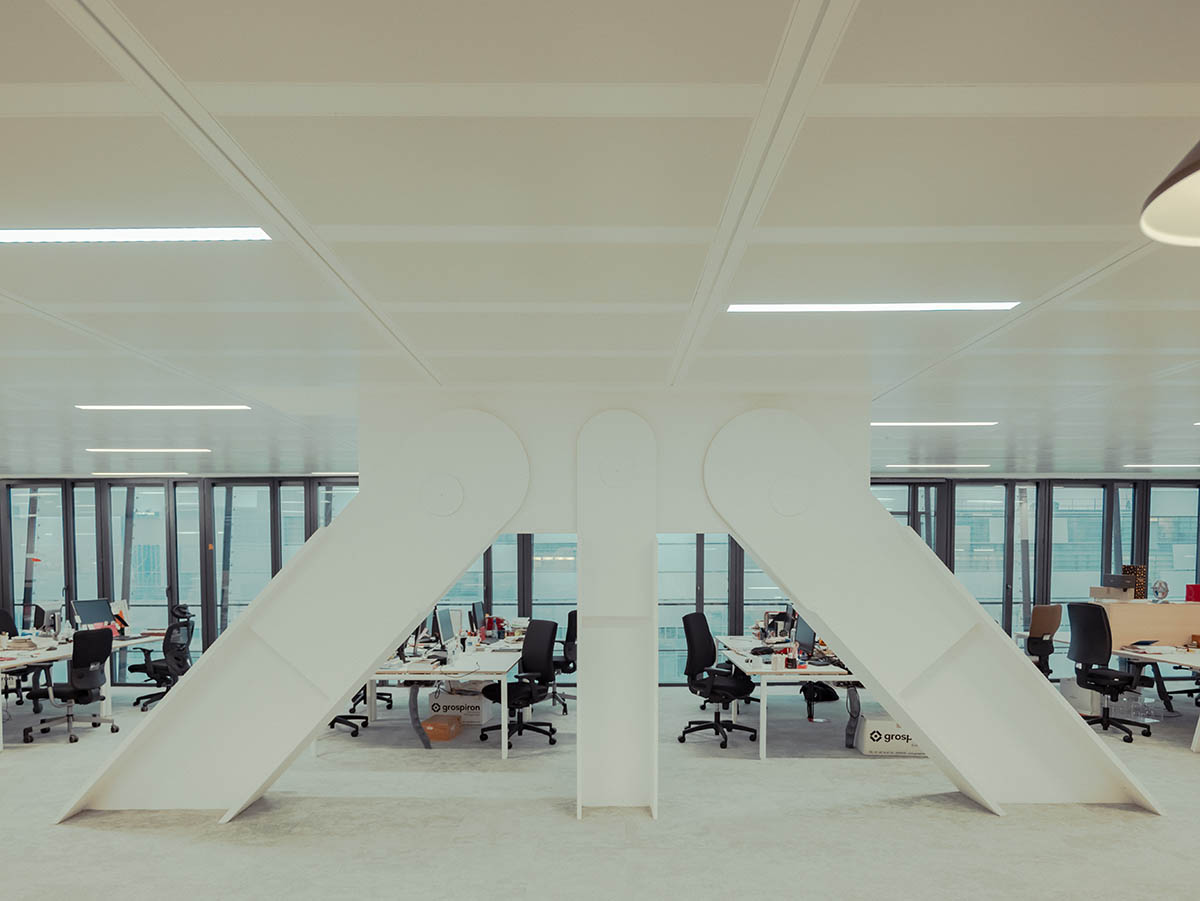 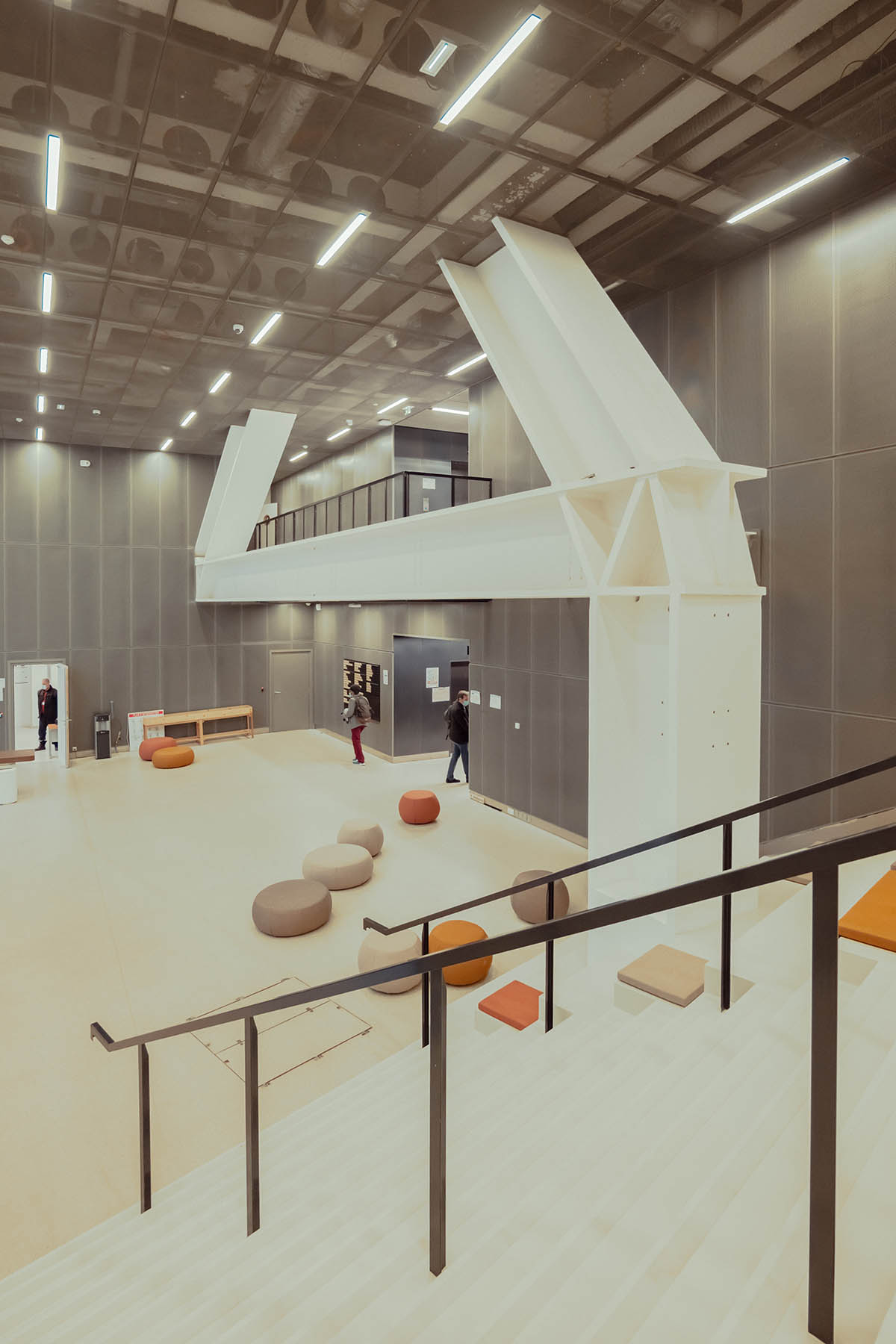 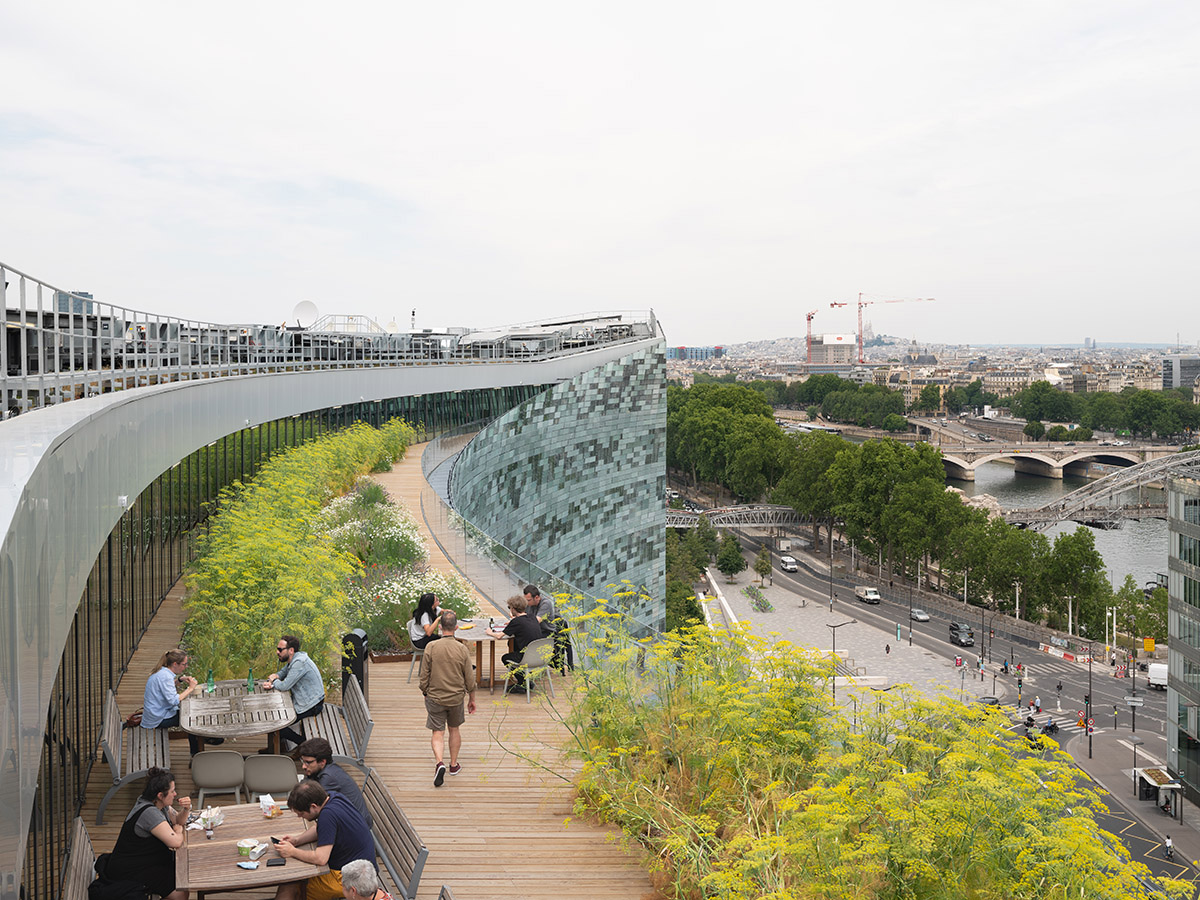 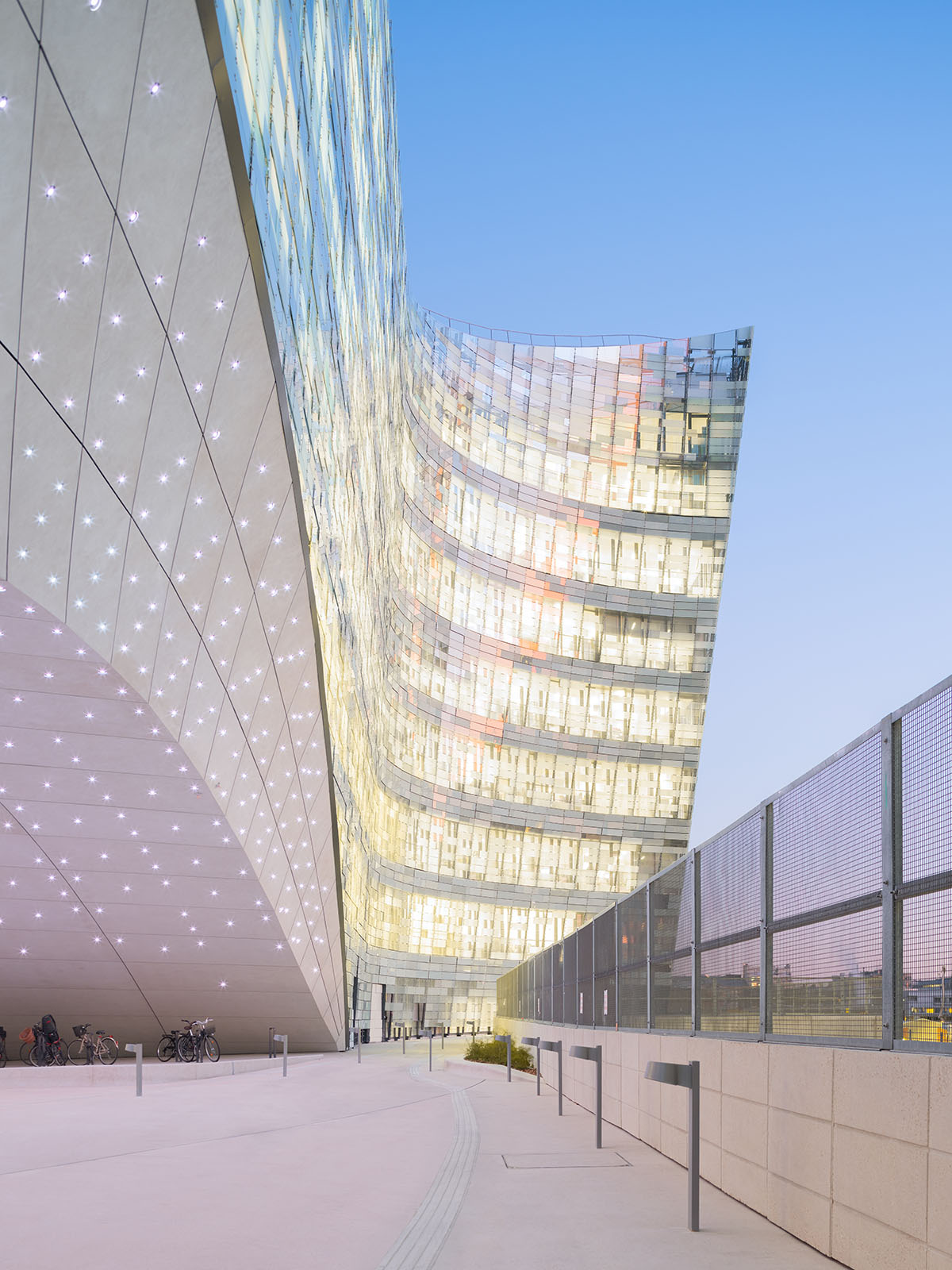 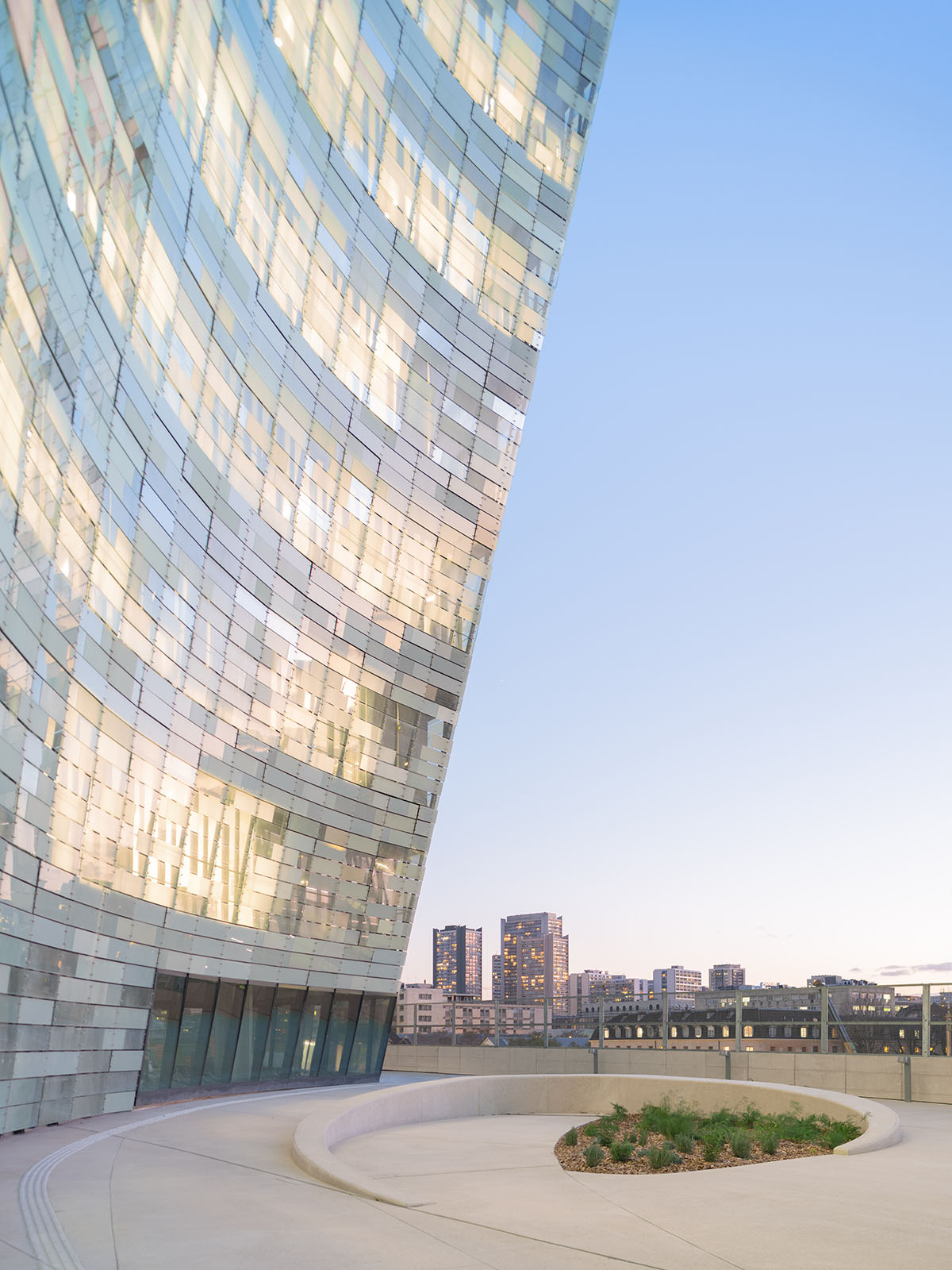 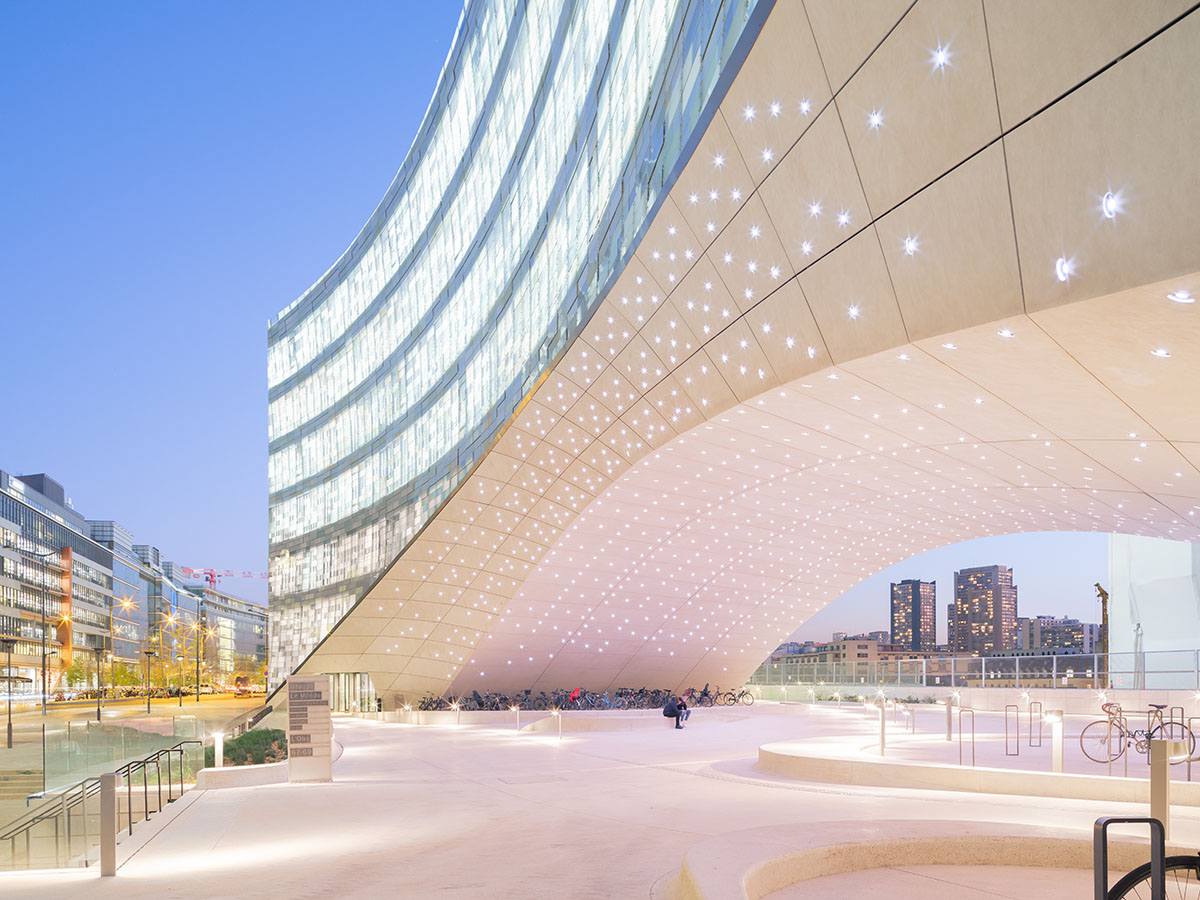 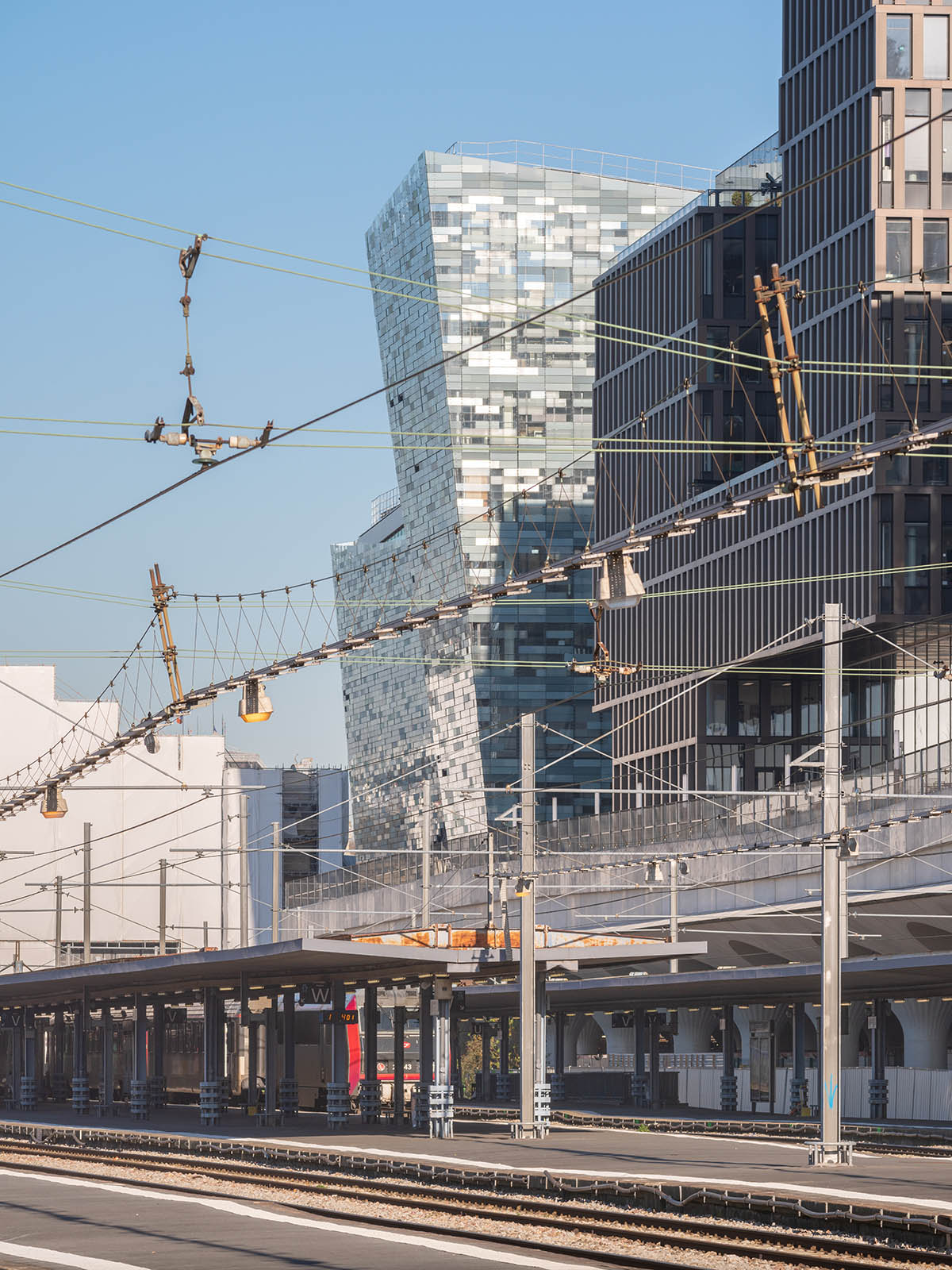 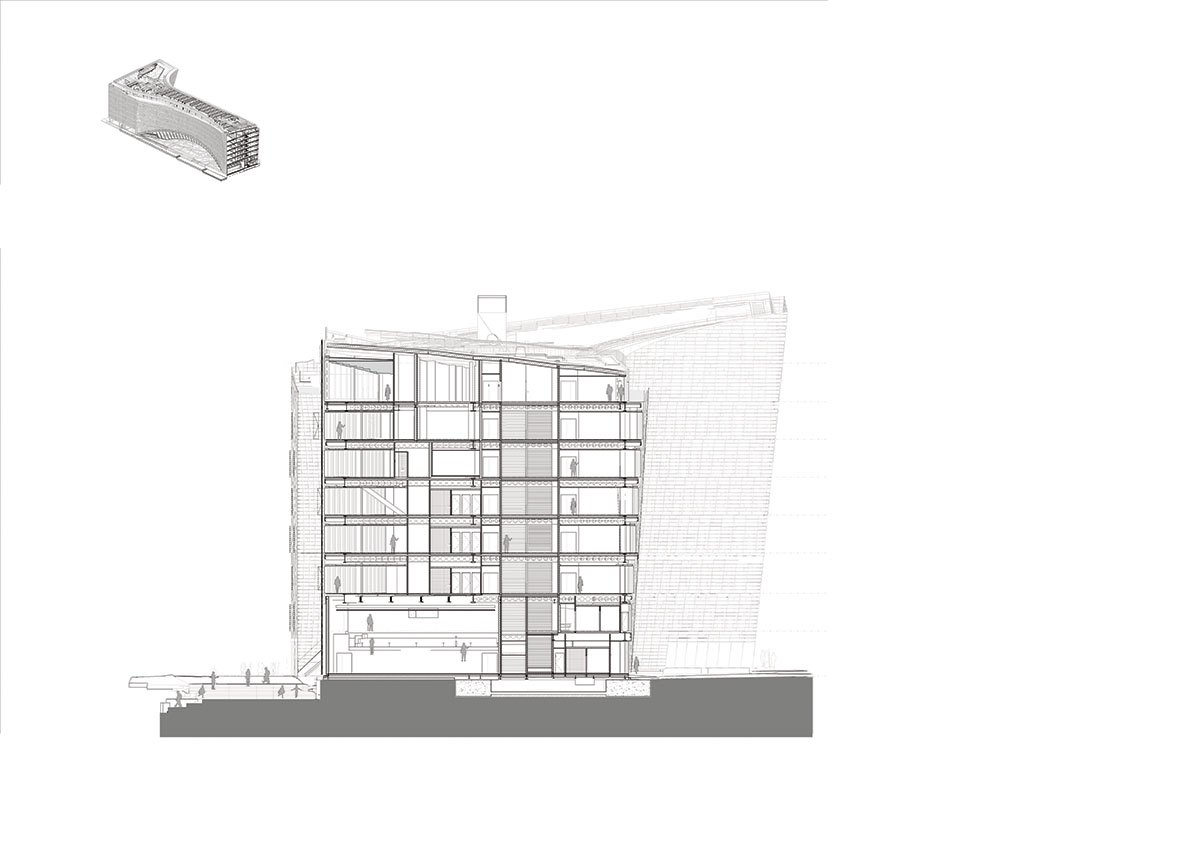 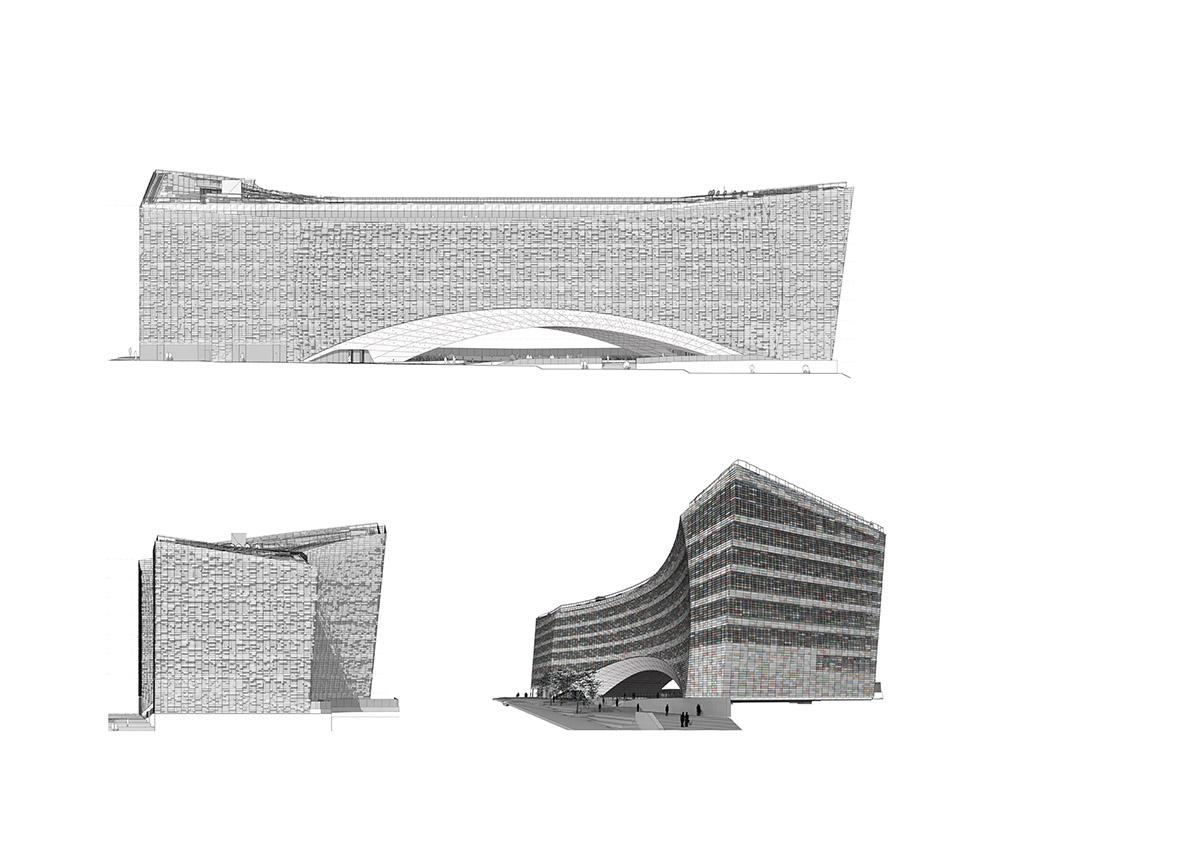