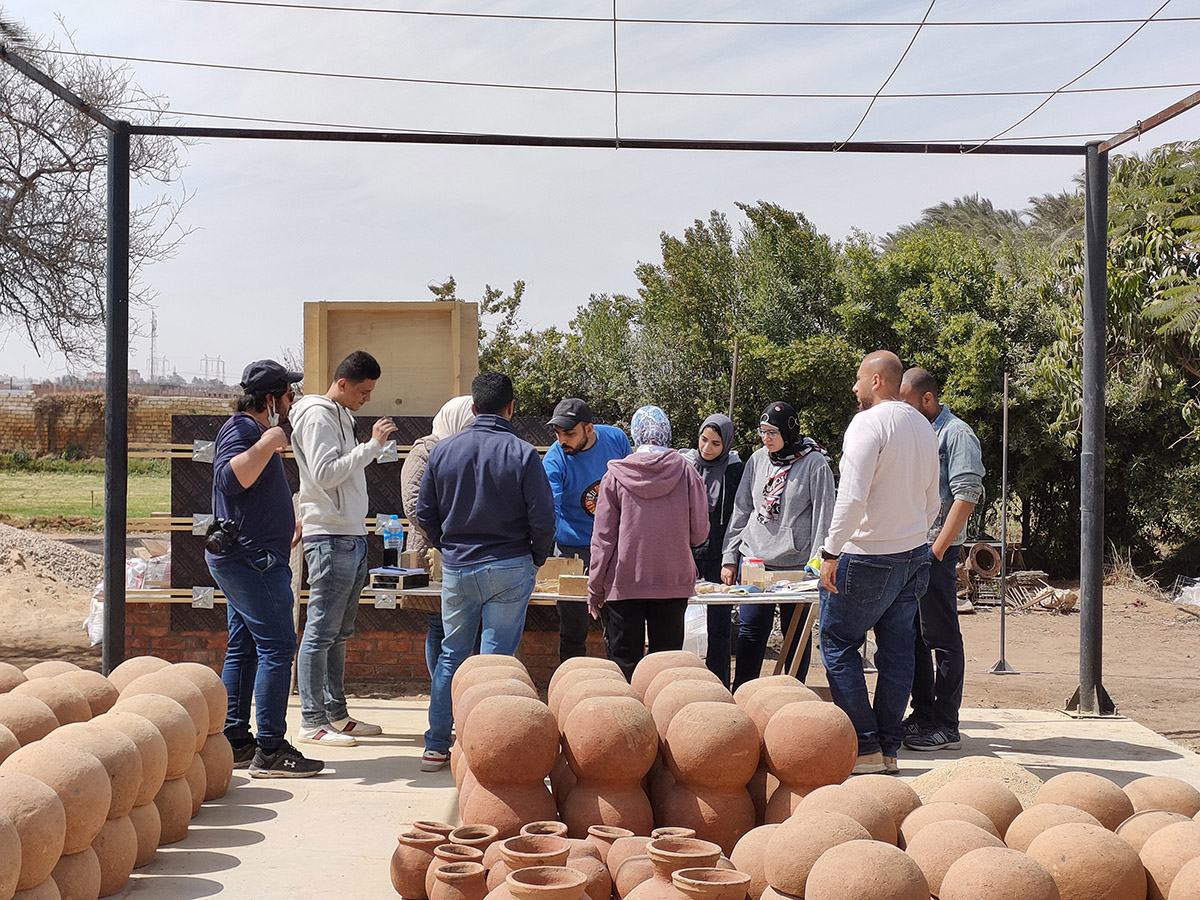 The technology of architectural buildings involves numerous trends and philosophies that reflected the changing perspectives towards the habitat of human beings at various times.

A qualitative leap in the evolution of building architecture and construction techniques was one of the consequences of the industrial revolution. New building materials and designs have been emerged in the architectural scene at that time representing an up-to-date technology to construct architectural units that comply with new social and economic functions and uses. The industrialization of the new architectural technology aspired to accommodate the fast-paced demand for various building units and structures needed for numerous architectural uses representing unprecedented advanced architectural and urban features like bridges, railroads, and several-story buildings.

Opposing the industrialized architectural viewpoint, a prevailing modern wave of Ecological architecture started to adopt and promote environmental aspects in the United States in the 1960s.  According to The Encyclopaedia Britannica, the building of shelter consumption is estimated by more than half of the world’s resources in the early 21st century. This encompasses - 16% of the freshwater resources - 30-40% of all energy supplies - 50% of all raw materials withdrawn from the Earth’s surface (by weight) - 40-50% of waste deposits in landfills - 20-30% of greenhouse gas emissions. Subsequently, novel terms were integrated into the architectural studies including green, eco, vernacular and sustainable architecture. 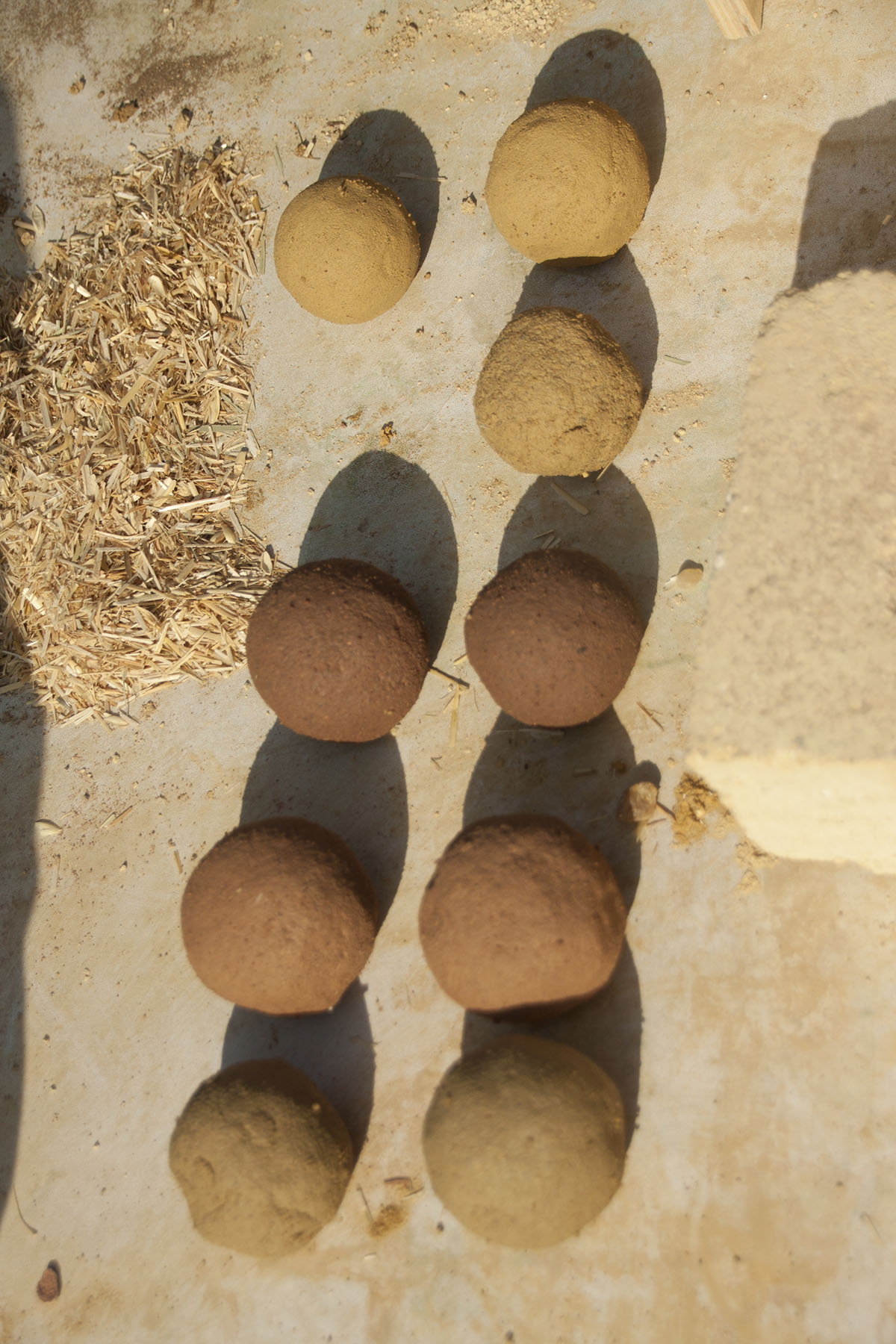 Asmaa Kamaly: Could you further explain what made you initiate an architectural studio with a vision for promoting eco-friendly architecture and construction?

Karim Raaft: After many Trials and Experiences, we found out that we trust in Eco-Friendly Architecture as it’s the most appropriate building method to conserve the Earth's Environmental System from pollution for the whole existing organisms.

Also, eco-architecture aims to shelter humans in an ecologically sustainable way. In the studio, we endeavor to preserve the traditional building techniques and examine more experiments in Earth Construction using local materials through our ideas.

Karim Raaft: Yes, we think that the red brick architecture contradicts the sustainable architecture in Egypt because of the red brick production process. Bricks burning produces too much pollution for the environment. In addition, the red-brick building method includes cement that is used to connect the bricks. Cement is considered a polluting industry. 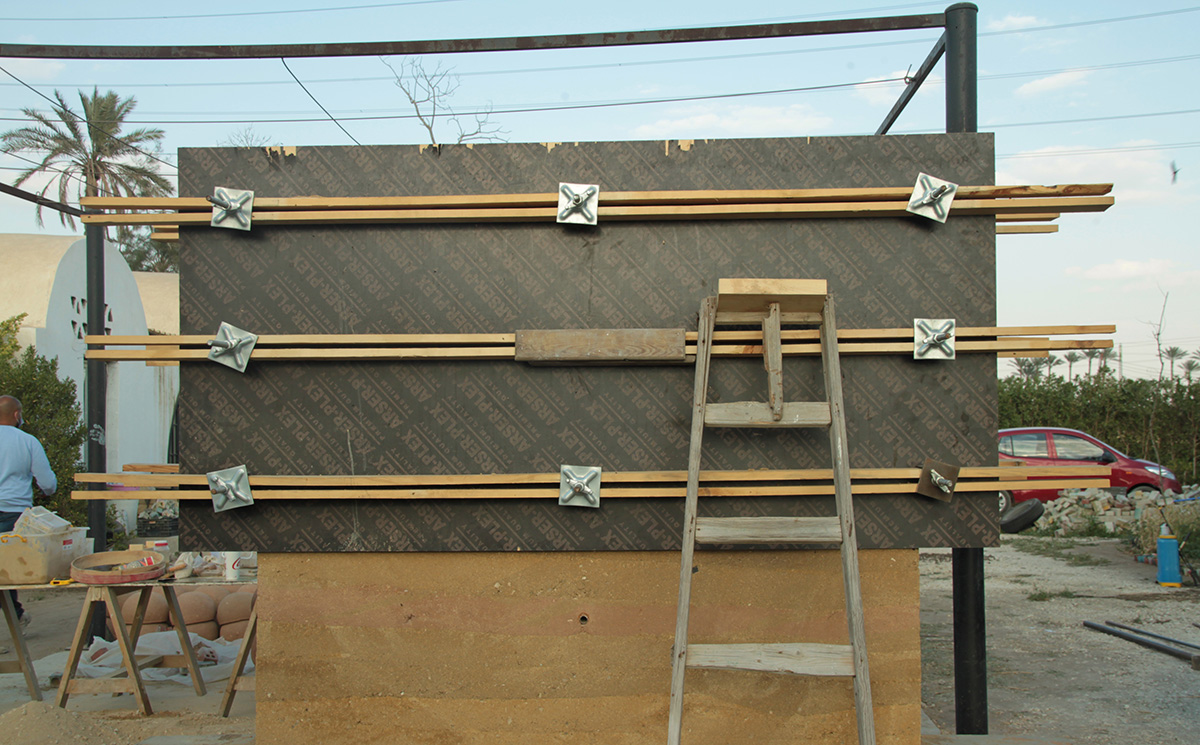 Asmaa Kamaly: Could you elaborate more on what it takes to construct eco-friendly buildings?

Karim Raaft: The goal of Eco-Architecture is to have the slightest possible negative impact on the environment during design and construction as well. Given this eco-environmental architecture line, several factors need to be taken into consideration. Those factors include the Thermal load passing by the chosen materials, shading devices, building orientation, green roof, and the integrated technology for the building. Moreover in the construction by using humans power instead of machines.

Asmaa Kamaly: Could you give a brief on the founding team and their background?

Karim Raaft: We are a team of three architects of which I am part. I am an Architect who graduated from Alexandria University, Faculty of Fine Arts with more than six years of experience in the Architecture field. Currently, I am working as the head of the design department for Biko Company. I was interested in the field of Earth Construction directly after his graduation, I have the passion for a link between my Designs and Earth Construction.

Osama Rashad holds an architecture bachelor’s degree from the faculty of fine arts, Alexandria University. He is a Site Architect, where he contributed to projects in South Sinai and he worked as a technical partner in many Earth Construction Techniques such as Rammed Earth and CEB. He is over six years of experience in building with Earth. He is keen to Explore the implication of earth Architecture in modern days with respect to community integration and behavioral aspects.

Mahmoud Elsalamouny is an Architect with more than five years of experience, Mahmoud holds a double Bachelor's degree from MSA University in Egypt and from the University of Greenwich in England. He received a management Diploma (PRMG) from the American University in Cairo. He is a co-founder for Atoms Studio, Founder for Accuracy Architecture, CEO for SMWA Group and team member in Ezbet Project Technical team for Urban development in Ain Shams University. Mahmoud has done National and International Projects in the field of Sustainable Architecture.

Asmaa Kamaly: Your studio was founded recently this year, what was the process of founding and establishing the studio?

Karim Raaft: The idea of our studio was already founded two years ago. However, the actual start was coinciding with the start of the coronavirus. At that time, we had the opportunity to do some experiments and designs as well. The products were so unique and different. We didn’t publish it yet, but we will soon. Furthermore, we started thinking to spread our ideas on site. Moreover, we spread the knowledge to anyone who is interested in the field. 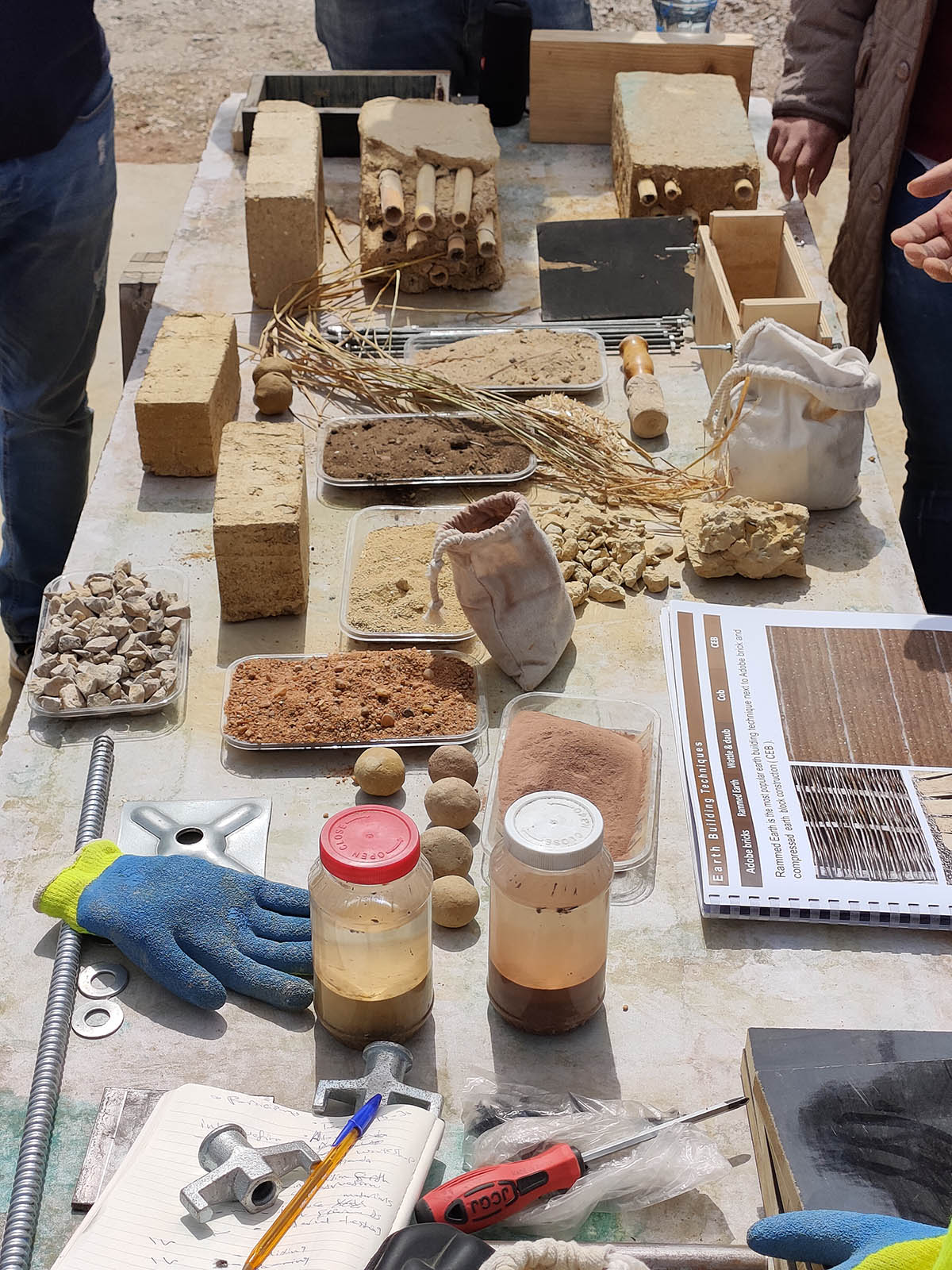 Asmaa Kamaly: What are the undertaken activities of your studio?

Karim Raaft: Atoms Studio Designs and Constructs using different types of Earth Construction Techniques for the highest rates of thermal comfort. Before any project, there is a soil experimentation phase that involves research and tests for the different kinds of soil to determine the most appropriate technique for construction. Moreover, we are committed to spreading earth construction knowledge by doing workshops.

Asmaa Kamaly: Did you happen to have partnerships with other organizations or social enterprises?

Karim Raaft: Not yet, but we are willing to cooperate in the field for spreading sustainability in Egypt. 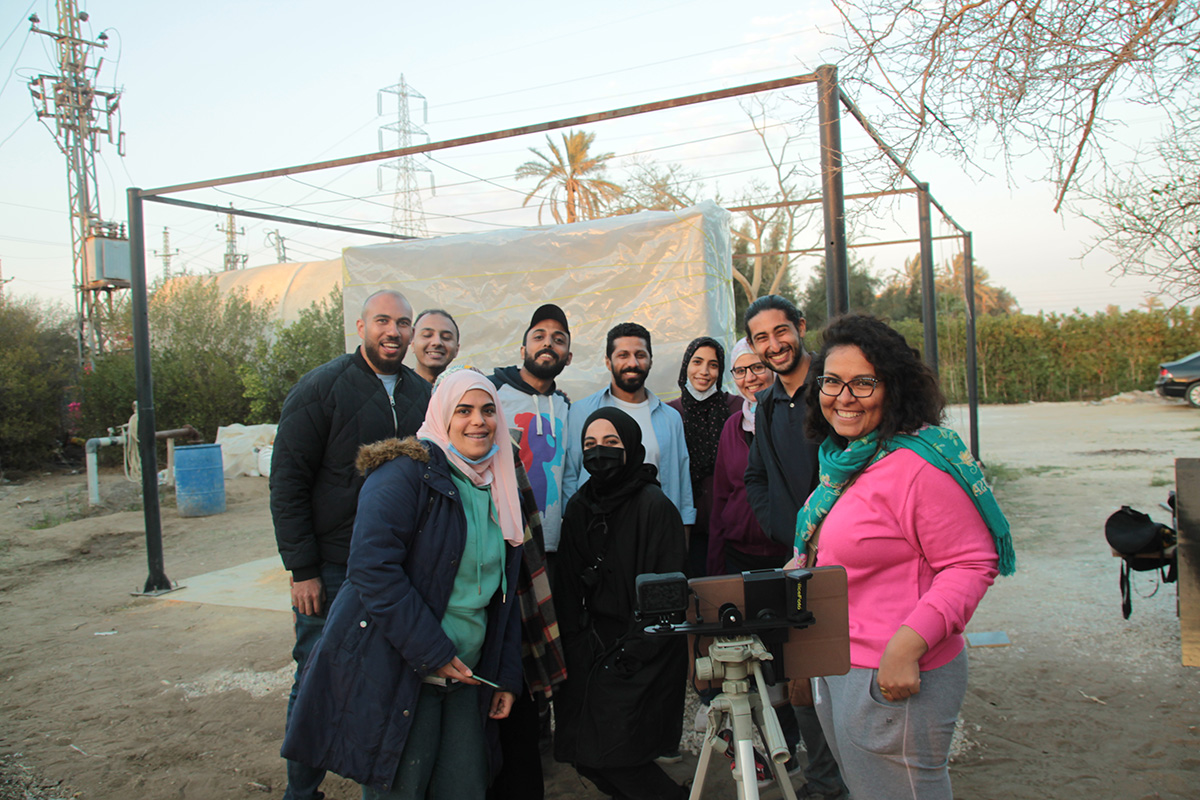 Karim Raaft: Yes, any participant who shows an interest in the field of Earth Construction is already in Atoms Community. The community encourages volunteering by those concerned with the field. We have more than 50 members in Atoms Community. The number of volunteers is proportional to the project size. We believe “If we are looking for spreading sustainability of our ideas, we should create a community that believes in our ideas to make a change in the Architecture field in Egypt’’.

Asmaa Kamaly: What are the challenges you faced carrying out your activities?

Karim Raaft: The challenge is to introduce innovative ideas to the market that is considered to be better for humanity.

Karim Raaft: It could be empowered by spreading the knowledge and benefits of the science for people by the community and institutional support in addition to having the passion for success is the most sustainable.

Asmaa Kamaly: What are your future prospects for your studio?

Karim Raaft: Our future prospects are to have unique designs of the earth construction field in Egypt besides having the fast tracks for our projects’ implementation.

All images courtesy of Atoms Studio.