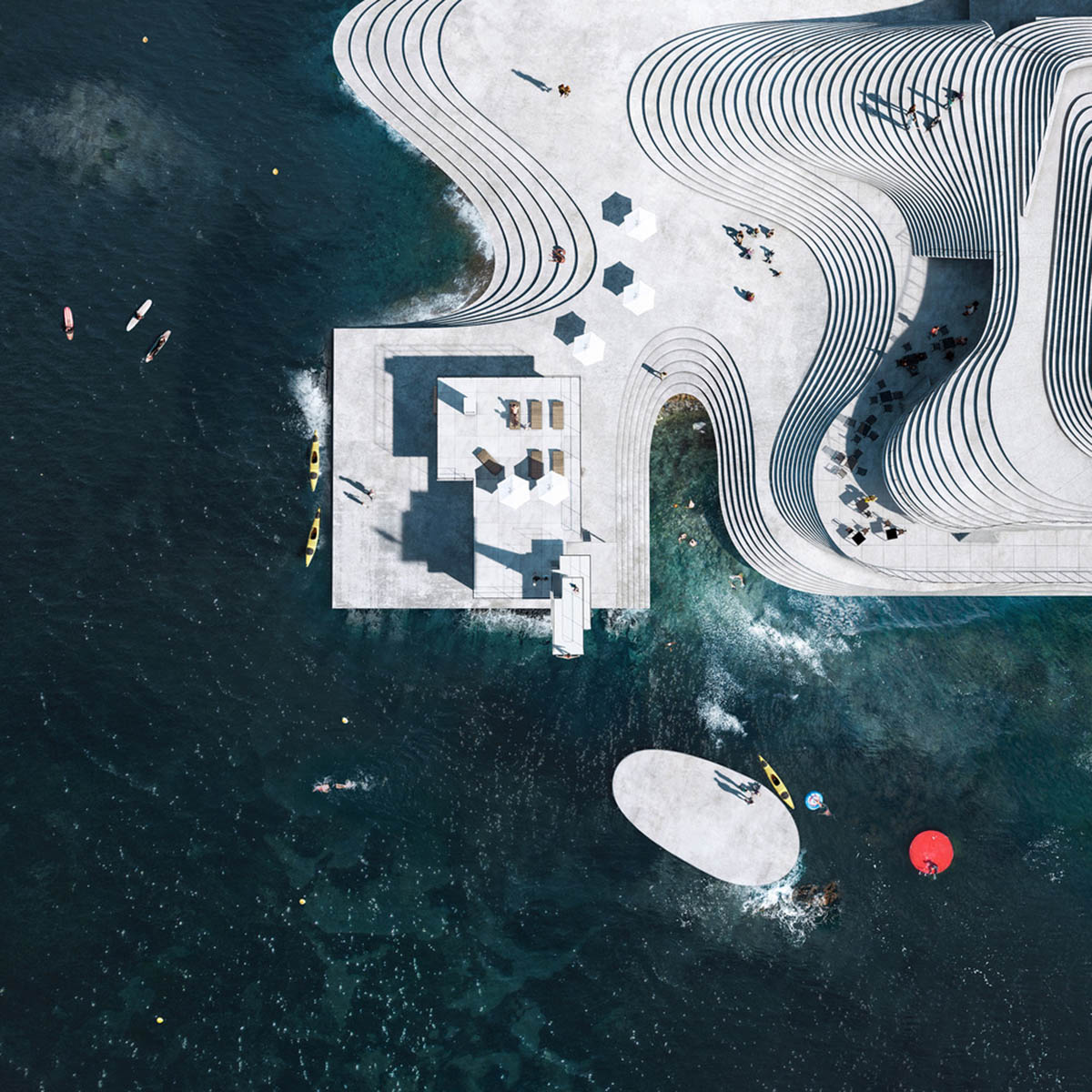 Called Knubben, the studio has envisioned a clear vision to design a distinctive island comprised of "soft concave and convex walls that form cavities" for this project.

Snøhetta's proposal is designed to "resemble a block of stone shaped during the Last Glacial Period", the project is made of abraded shapes where soft concave and convex walls will form its own landscape. 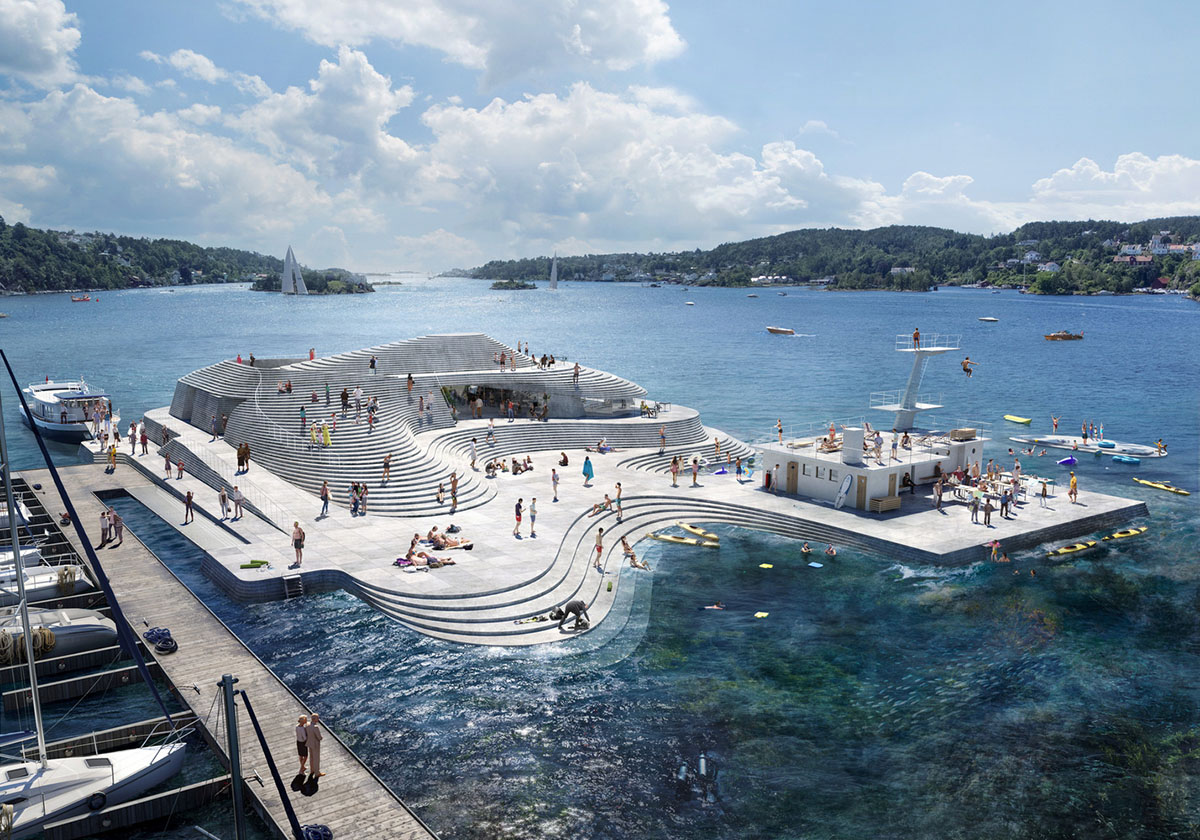 The Knubben bath was originally designed by Ketil Ugland and the facility was functioned by Arendal Swimming Club for diving competitions, swimming training and other aquatic activities until 1947.

The structure was opened to use in the 1960s, this time as a jazz club, with its slender and clean lines. The Knubben is conceived as a small yet elegant example of the modernist era. In the 1980s, substantial part of the structure fell into disrepair and the diving platform was demolished in these years.

In 2018, Snøhetta was commissioned to redesign the facility with a feasibility study. Based on the original idea of the structure, Snøhetta's reinterprets the new Knubben as an architectural response to the past, aiming to conserve vital parts to be memorialized, while emphasizing the becoming of Arendal as an urban destination for both national and international audiences. 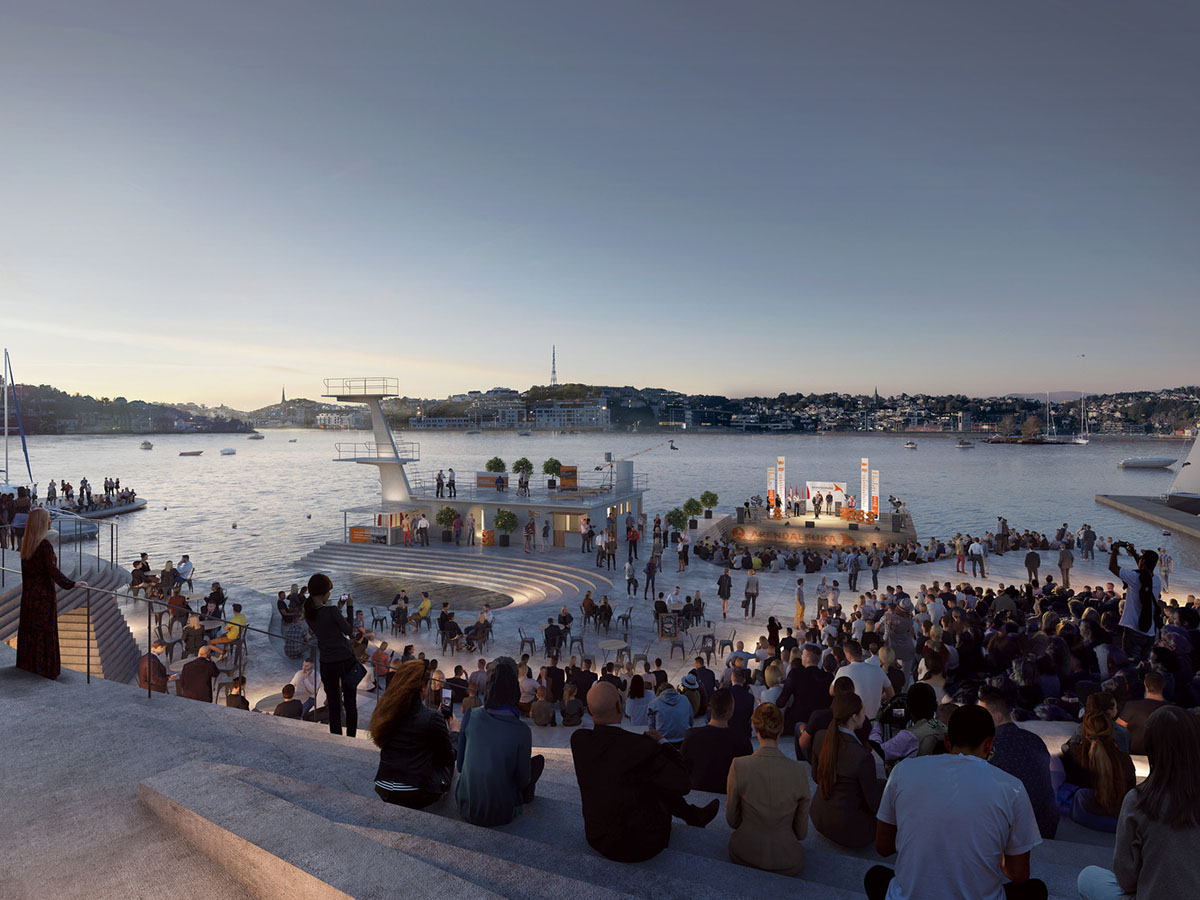 The first idea was to to design the structure as a renovation project adapted to its original glory. However, Snøhetta wanted to enhance the structure's possibilities for the island making it a multi-use site - for more than just aquatic activities.

Snøhetta designed a new part for the Knubben that will rise as a structure founded on steel core piles, further broadening the expanse and possibilities of the island. 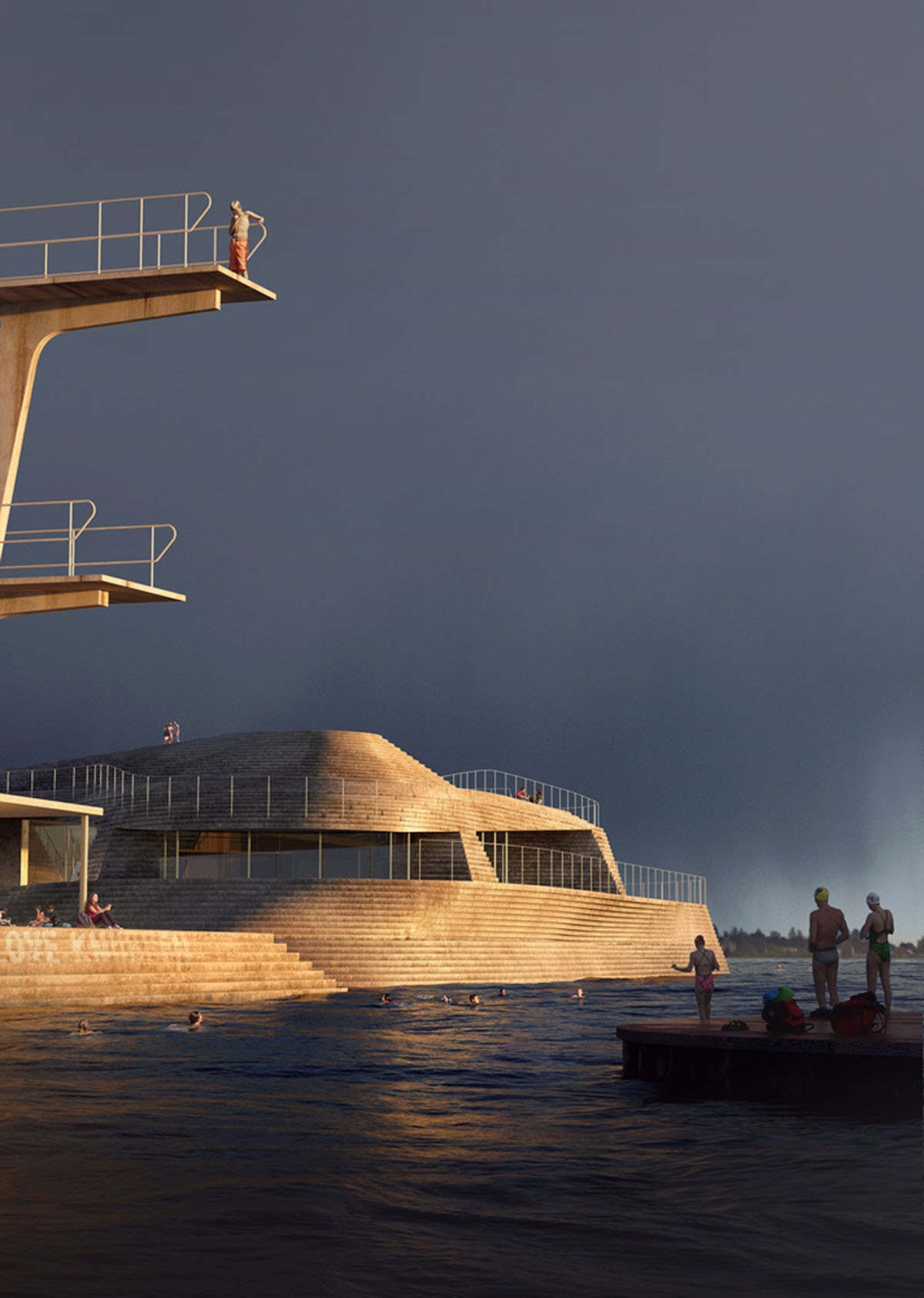 Conceived as a man-made structure, the design takes inspiration from the shapes the studio find in the islets and skerries along the Norwegian coast.

The new architecture of the Knubben will "represent the terrain as accurately as possible" as the architects explained, the construction will consist of horizontal layers following the contour lines of a map.

"As a robust skerry that can withstand wear and tear, Knubben will be a lively meeting place that can be used all year round," Snøhetta said in its project description. 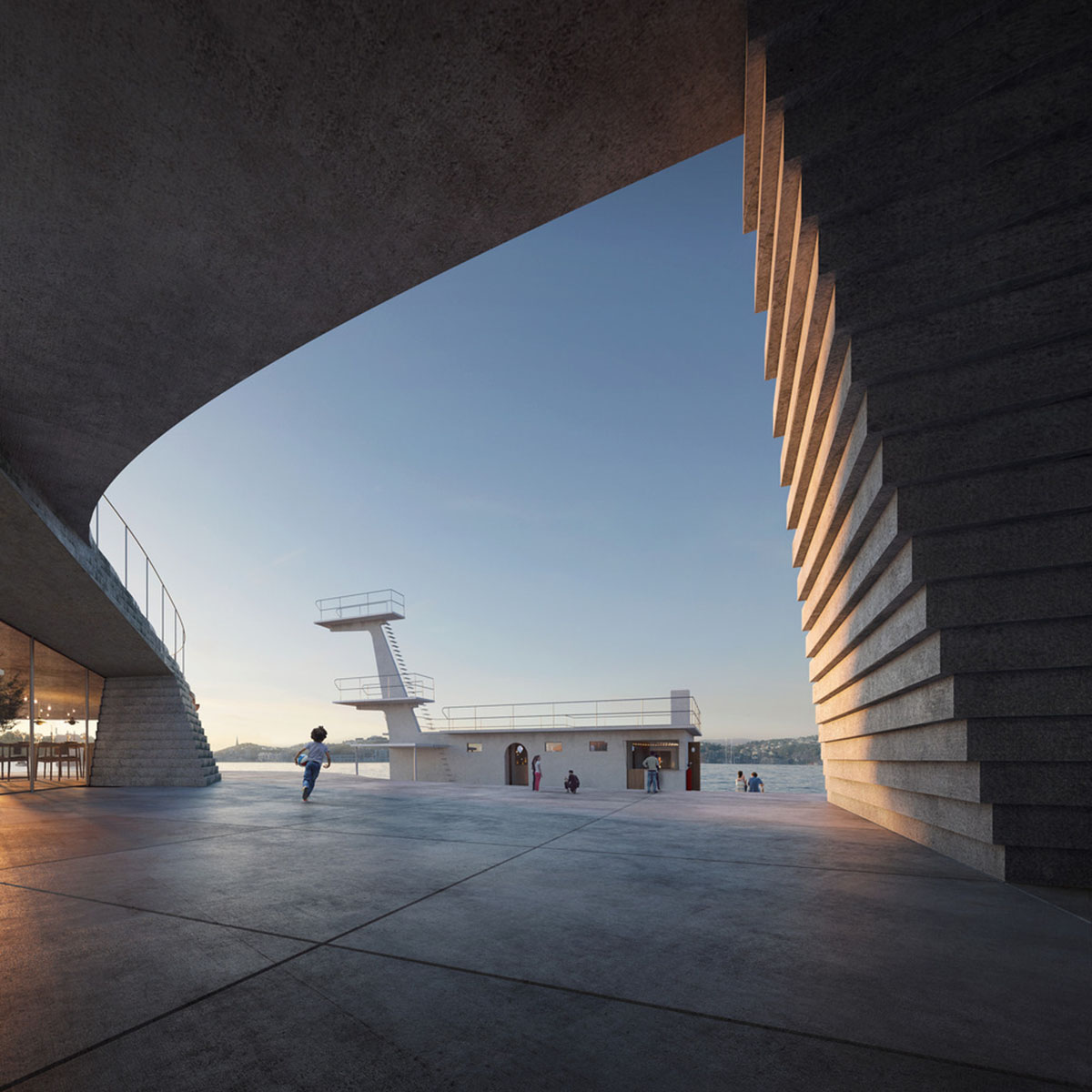 The facility will consist of an open-air stage alongside a sculptural amphitheater, creating a setting for all kinds of performances. Indoor areas, including a restaurant and spaces for more intimate concerts, will be added to the Knubben.

The studio said, "as we become increasingly urban, we long for contact with nature." 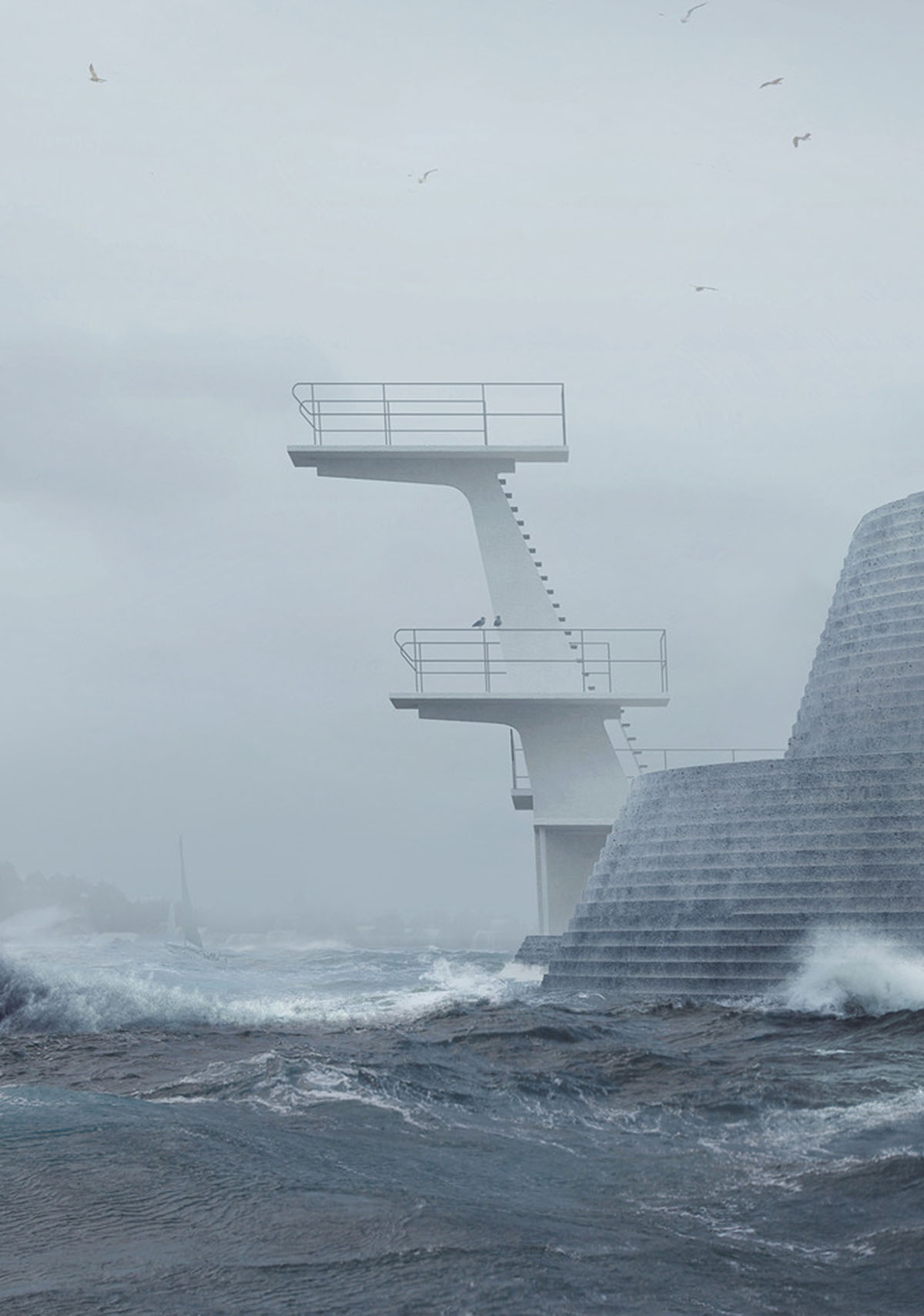 "Knubben will be a social meeting place that provides a sensation of closeness to the sea, and will serve as a backdrop to a plethora of activities and experiences. It will be a soothing spot in the sun on a hot summer evening, a hub for cultural events, and a place to enjoy a good meal after taking an icy bath on a cold winter’s day."

The new Knubben will open its doors to the public in 2024.