Dominique Perrault Architecture's design "Institute of Design and Innovation" will be one of the projects that are being developed in the city of Shenzhen, including SANAA's Shenzhen Maritime Museum, Miralles Tagliabue EMBT's Conservatory Of Music, Ateliers Jean Nouvel's Shenzhen Opera House, Sou Fujimoto + Chen Donghua's Shenzhen Reform and Opening-Up Exhibition Hall and more. 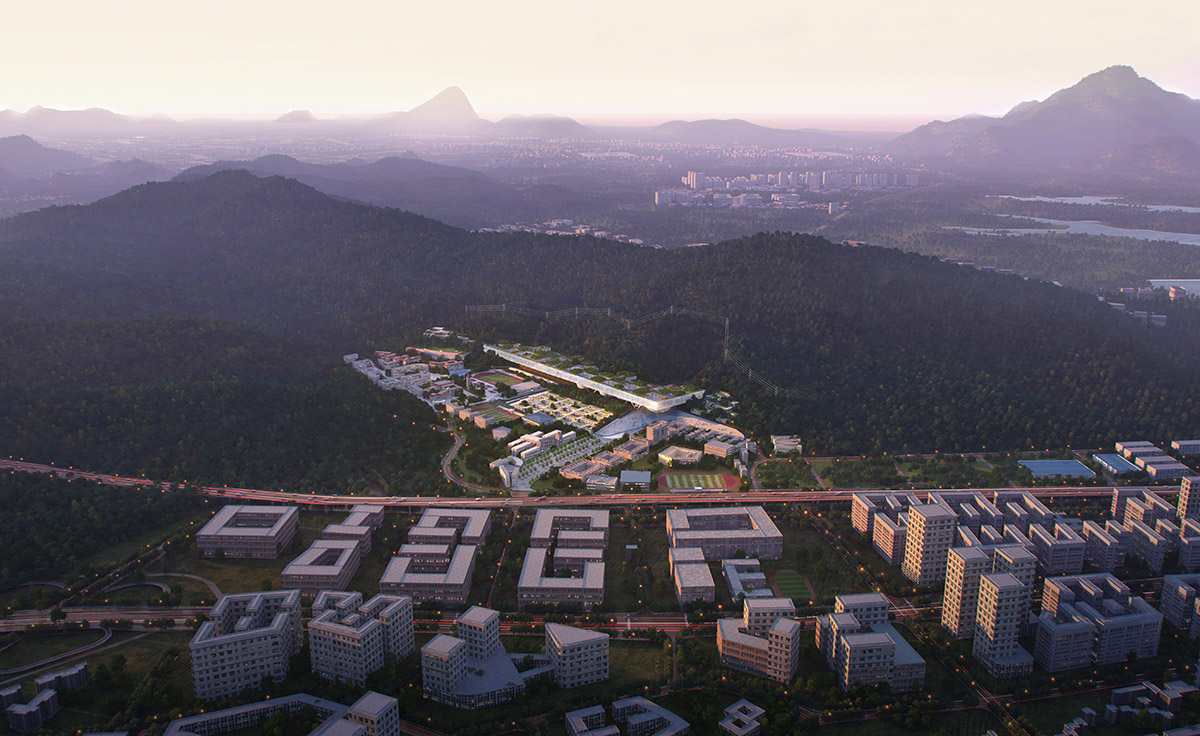 Located on the outskirts of Shenzhen, in a still mainly rural area, the project is stretched along the mountain relief of the "Phoenix Mountain".

While the project is embedded into the landscape, it is aimed to preserve the legibility of its horizontal structure, ensuring that no prominent architectural element would disturb this "plateau" geography.

Creating a horizontal, large-scale landmark, Dominique Perrault is inspired from the Chinese character of the site, reflecting the atmosphere of a line of mountain and water. 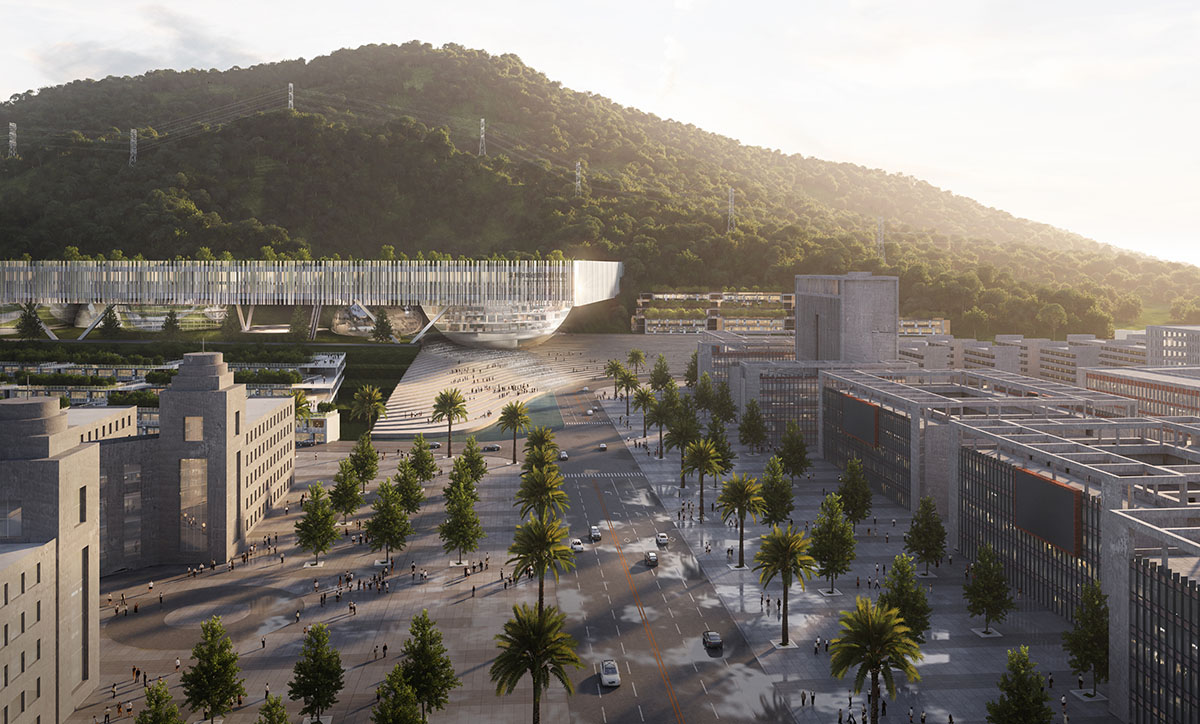 Covering a total of 300,000-square-metre area, the project acts as a horizontal line in the site, detached from the ground like a large bridge, and develops a front of more than 700 meters long.

The new campus of the Shenzhen Institute of Design and Innovation will form a larger part of the new the Southern University of Science and Technology (SUSTech), which was established in 2011, and will accommodate about 4,000 students.

Hovering above the ground like a horizontal line in the landscape, the main volume maintains visual transparency at pedestrian level, and its compact height ensures views towards the great landscape. 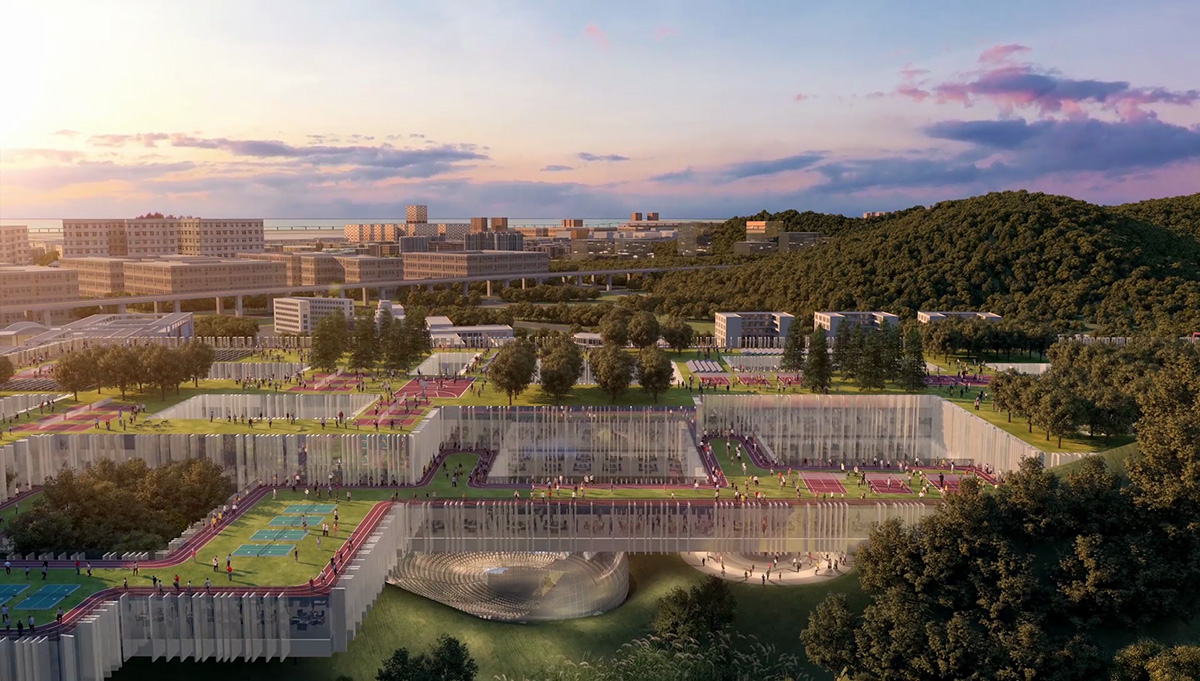 Raised above the natural ground, the structure creates a protective shelter, hosting public spaces and gardens, these spaces are are punctuated by "dome" like structures housing various easily identifiable academic functions.

The functional organization of the campus is based on two simple and intuitive elements: the "Hyper-Ground" and the "Hyper-Roof". 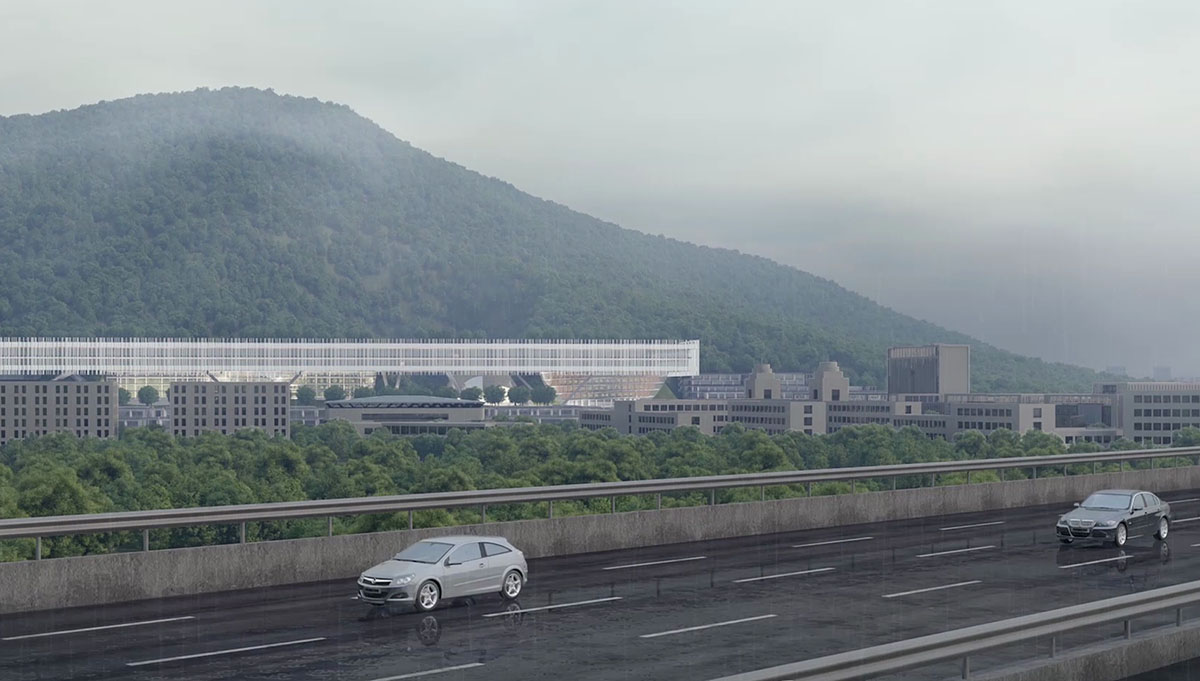 In the Hyper-Ground, the project allows to circulate pedestrians and soft circulations, limiting road traffic on the entire site. A main circulation axis of the campus is located underneath the entire length of the suspended volume.

A long-protected pedestrian promenade is designed as a wide platform which will house the functional activities of the campus, such as various public spaces and access to the common programs are developed. The main public space is shaped by a large outside square, hosting the social life of the campus. On the city side, there will be a mineral amphitheater that connects the university site to its neighborhood and forms the entrance to the campus.

"The project underlines a strong desire to create exchanges and interactions, to hybridize disciplines in order to encourage innovation and excellence," said Dominique Perrault Architecture.

"The approach also seeks to introduce a strong vegetation and the creation of intimate and protected spaces, through porosity between interior and exterior."

"Along the shaded and airy pedestrian avenue, large circulation cores are arranged to connect the ground and roof levels, as well as the functions between them," added the office. 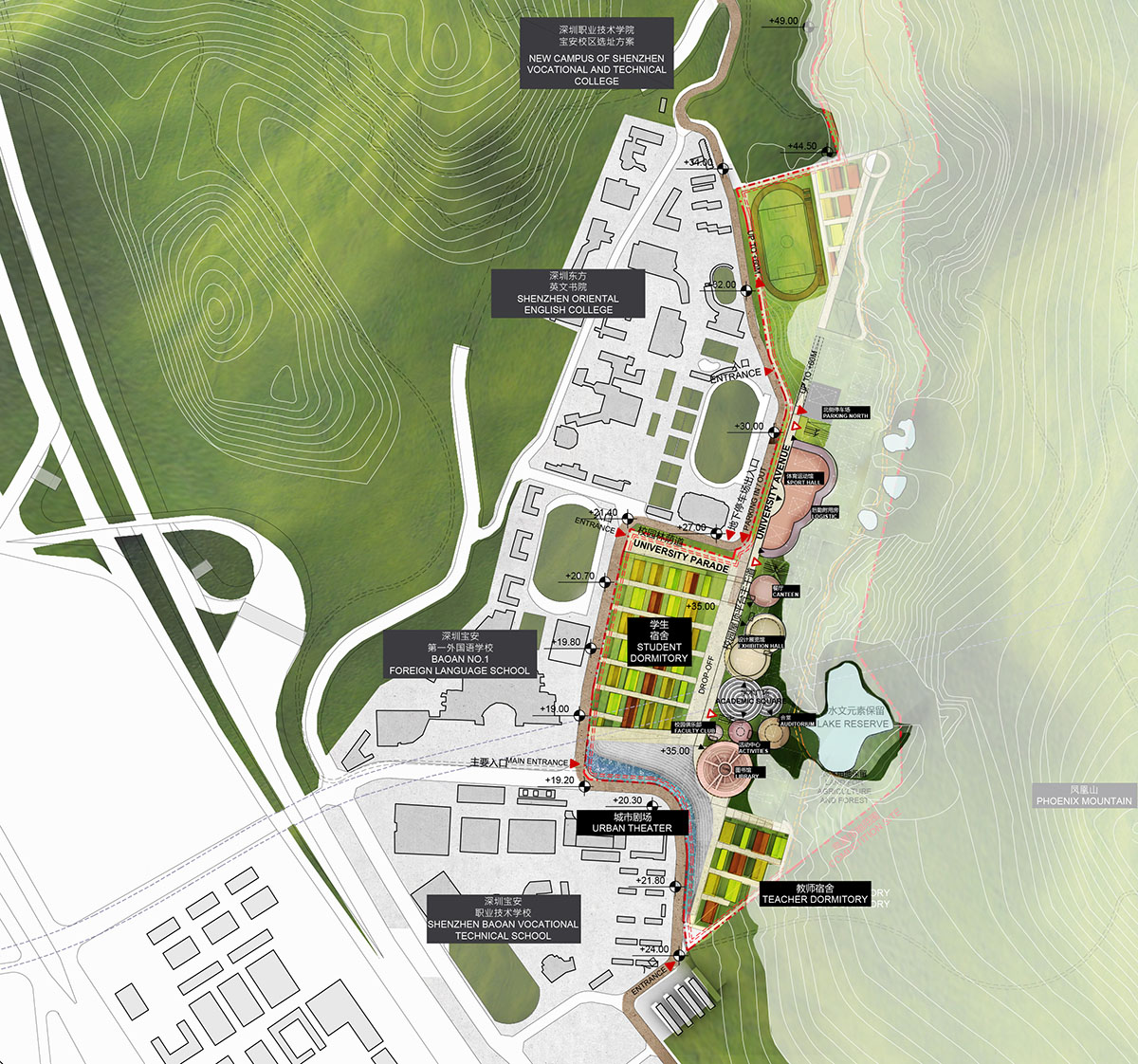 Monumental domed-structures house a series of common facilities, which are visible from the "hyper-ground" such as the library, the university refectory, the auditorium, the exhibition halls and the student club, a common space for gathering and relaxation.

Hyper-roof is the second element of design. The circulation cores that connect the "Hyper-roof" to the "Hyper- ground" serve all the teaching spaces located on the two levels of the main volume: classrooms, teaching laboratories and research laboratories.

Above, the roof creates a panoramic promenade, a huge balcony overlooking the city, 50m above street level. The access to the roof level offers a real garden for everyone, arranged in different sectors, each with a specific program and atmosphere: garden spaces, terraces, plazas, sports areas, etc. 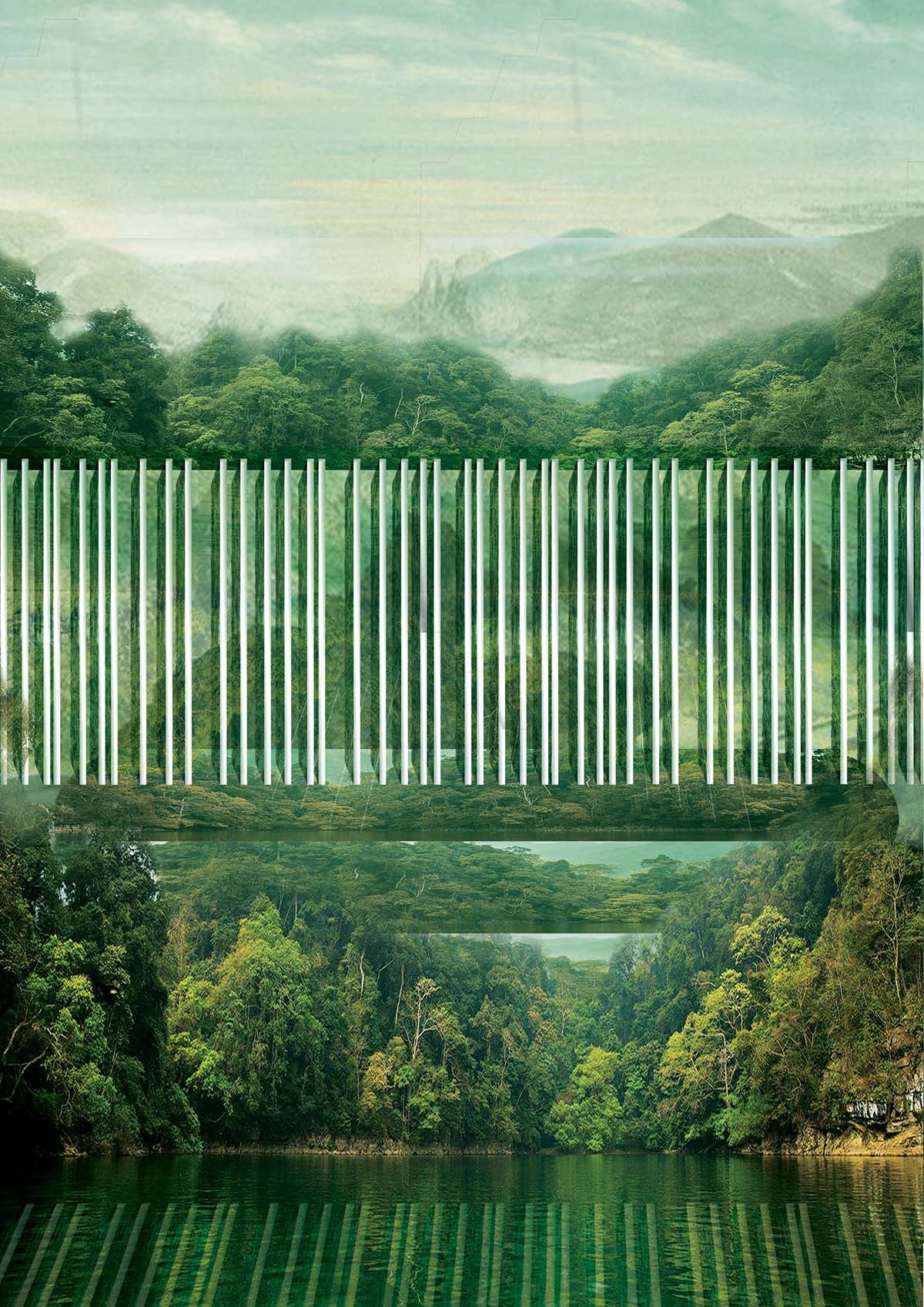 Treated with the same attention as the project’s vertical façades, the large roof also plays an active role in the technical functioning of the campus. As the studio highlight, the roof will widely be planted and vegetated to contribute to the insulation of the building and act as the recovery of rainwater. The installation of photovoltaic panels also provides energy for the entire building.

Patio-villages will be part of students and professors housing

The project also includes housing for the students and professors, consisting of several "villages", offering a terraced architecture with patios.

These groups of housing units set in the topography, with their green roofs, are reminiscent of traditional layout of the hillside terraces, and their patios are a reference to the traditional Chinese composition of housing.

For material choice, the architects preferred two main materials: metal and glass. The building is punctuated by thin vertical lines of light metal, while the large windows provide a natural lightning for all the working spaces and wide views of the landscape. 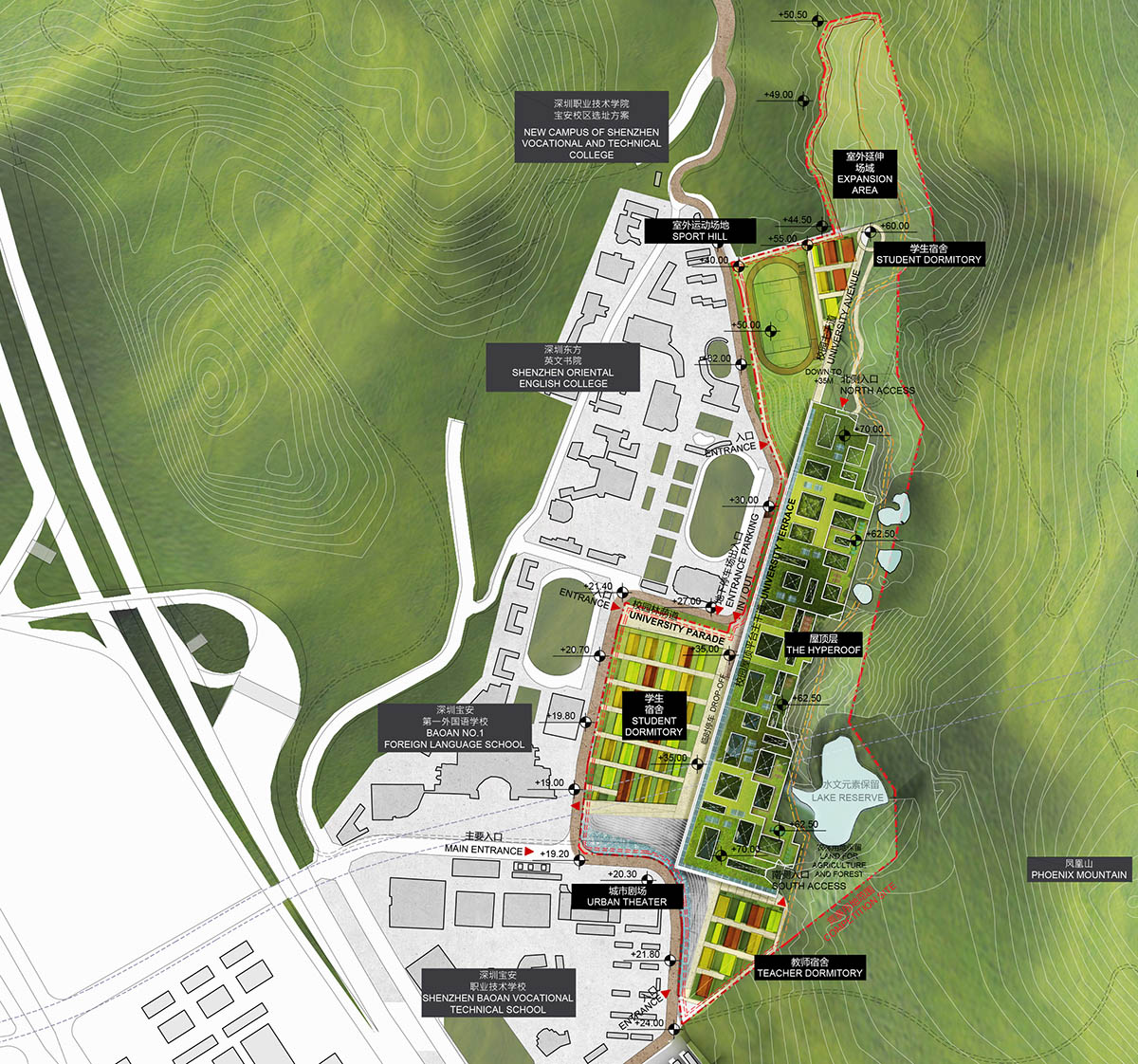 "The vibrations of the envelope, between the white and emerald tones of glass metal, will constantly vary its appearance, so that the building will be perceived differently depending on the angles of approach, the seasons or the time of day," added the studio.

"The reflections unify the composition and preserves the interior activity from outside views."

As the studio emphasizes, the constructive principles and the arrangement of the spaces allow great flexibility in the interior design and the possibility of imagining possible future developments of the campus. 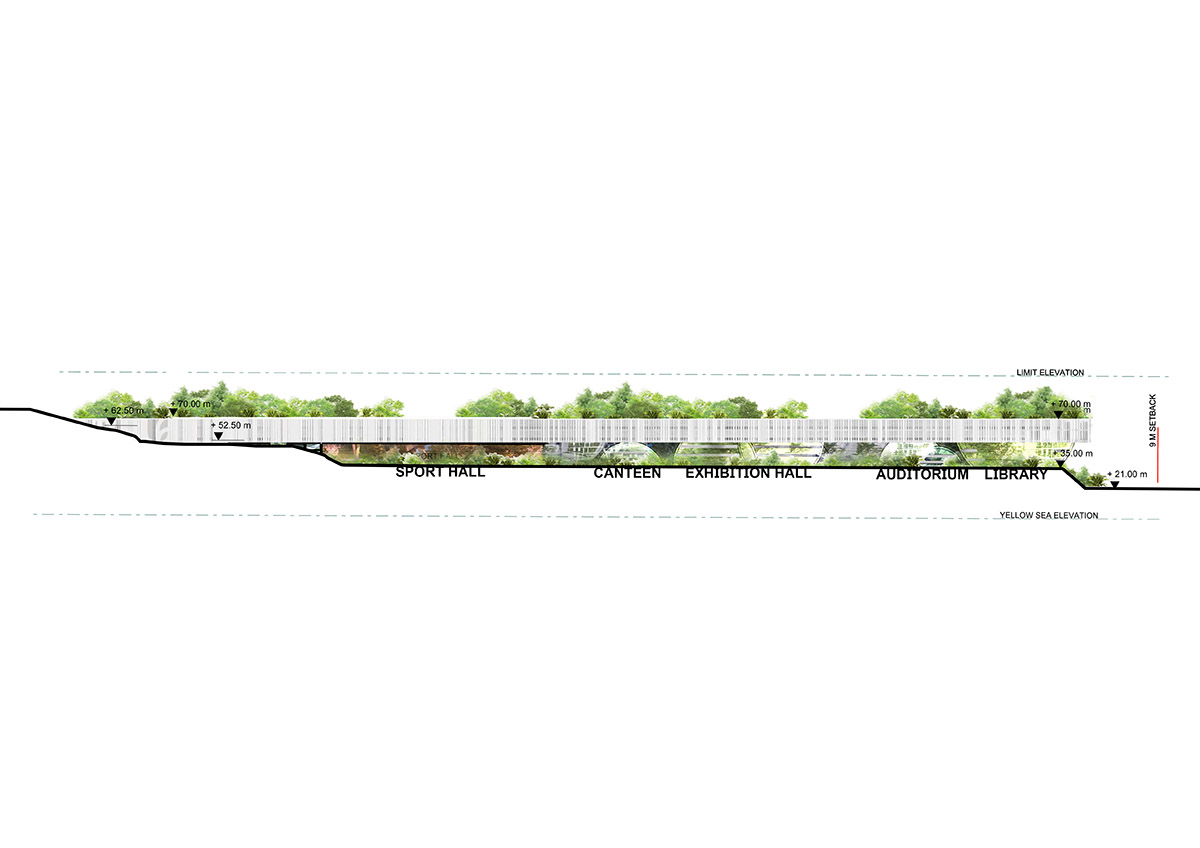