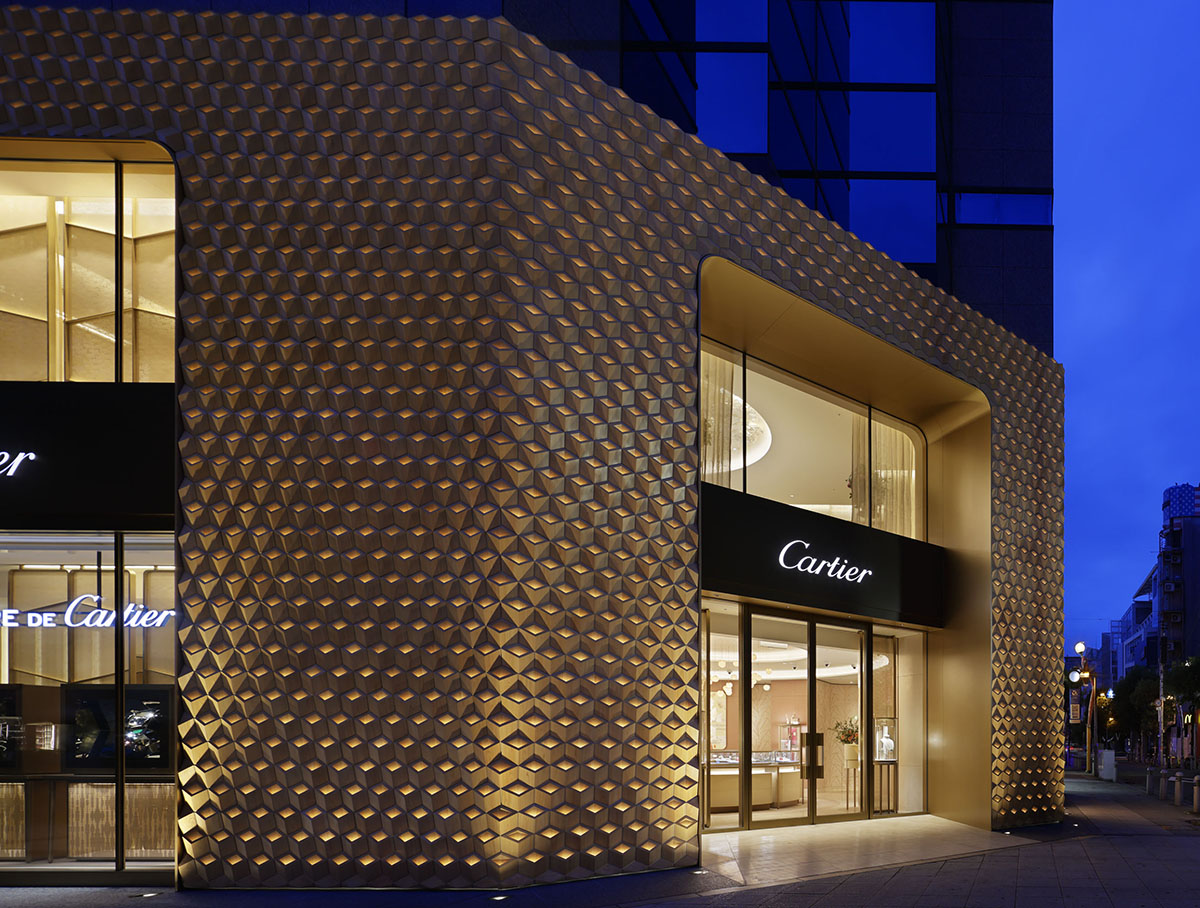 Named Cartier Facade, the studio has wrapped the building's façade with a pattern of protruding interlocking diamonds that illuminate at night to mark the building on a prominent corner of Shinsaibashi, a high-end shopping district of Osaka.

Designed for French luxury goods brand Cartier, the new store shares an intersection with the metallic and glassy exteriors of Apple, Nike and Burberry. 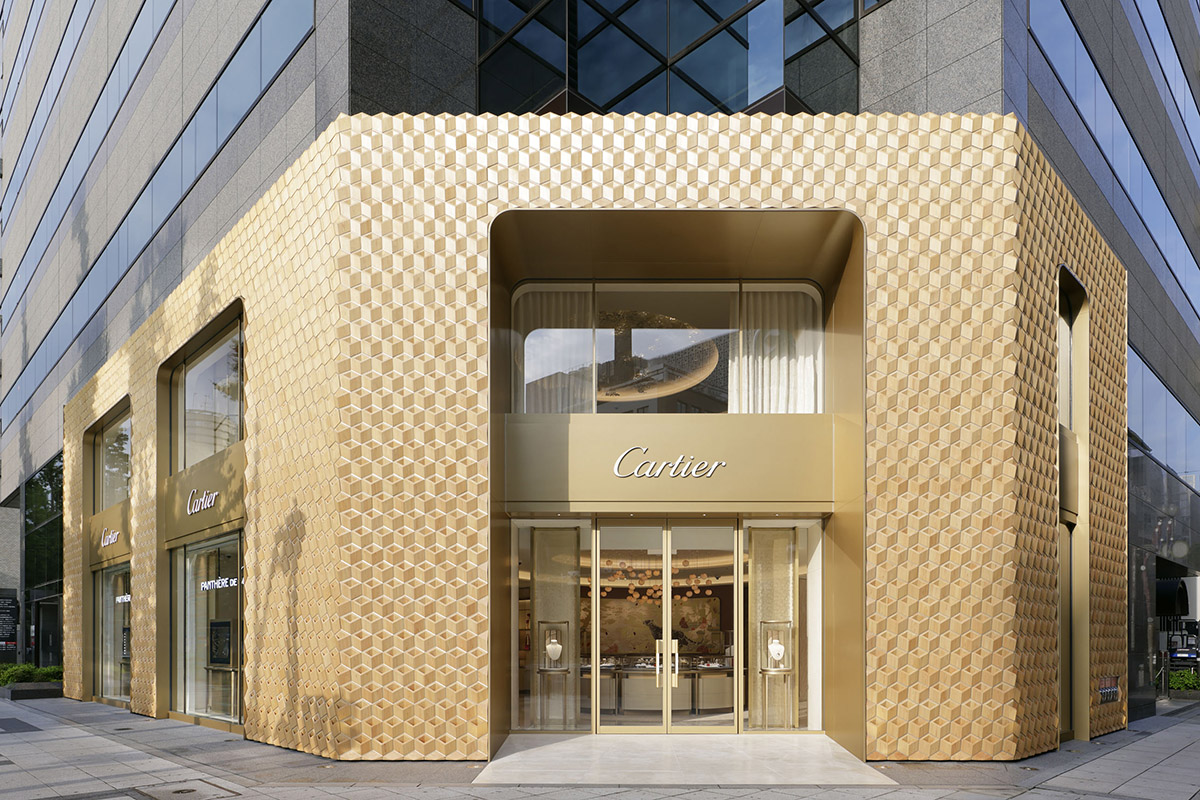 To create an environmentally conscious structure that reflects Cartier’s involvement in responsible jewelry, the architects aimed to work with renewable and recycled sources, as well as local artisanship. 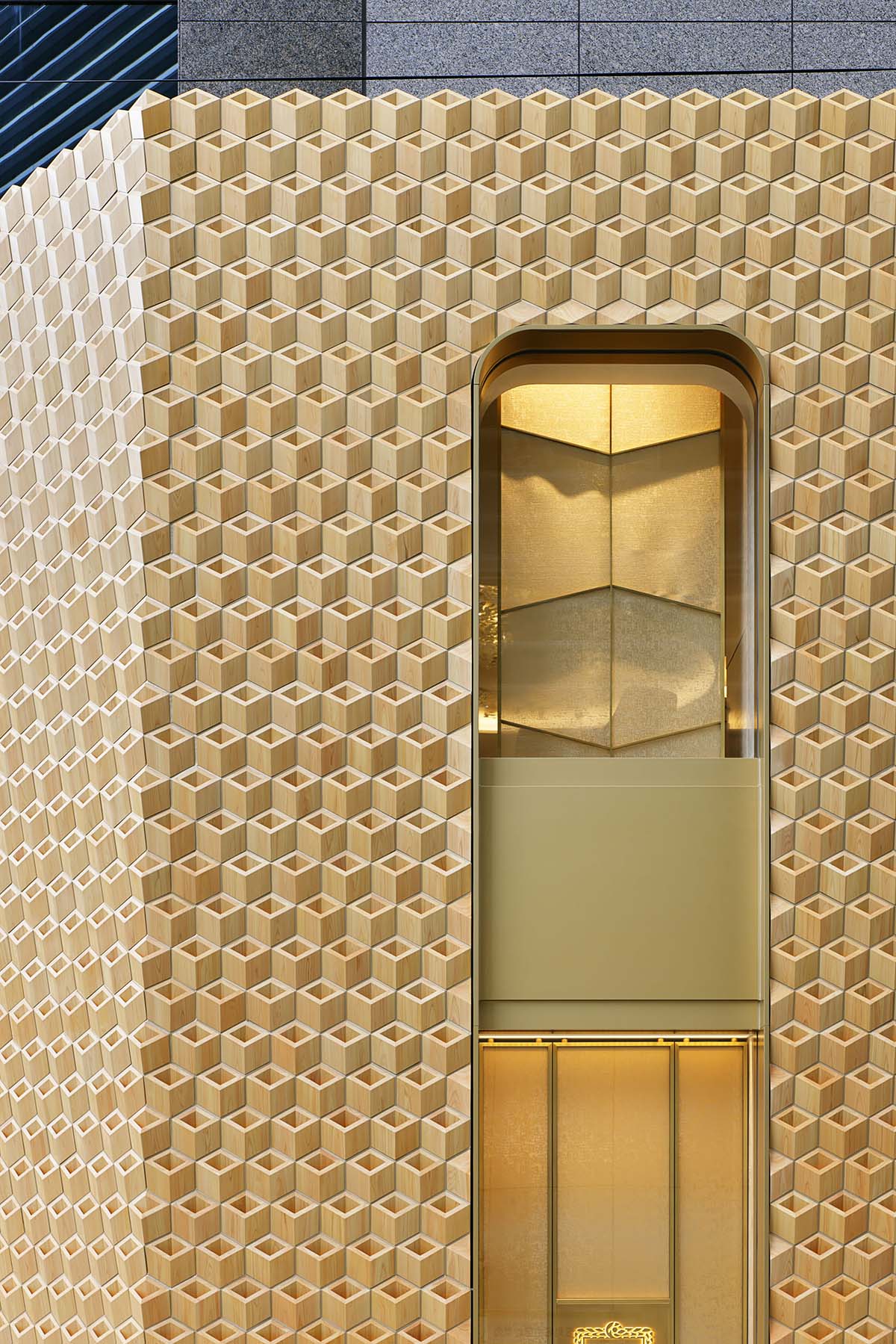 To reflect this idea, the architects used seasoned Hinoki wood (Japanese cypress) from Gifu Prefecture and Kyoto was chosen for its warm tones and historical background, and recycled aluminum used in its structural framework. 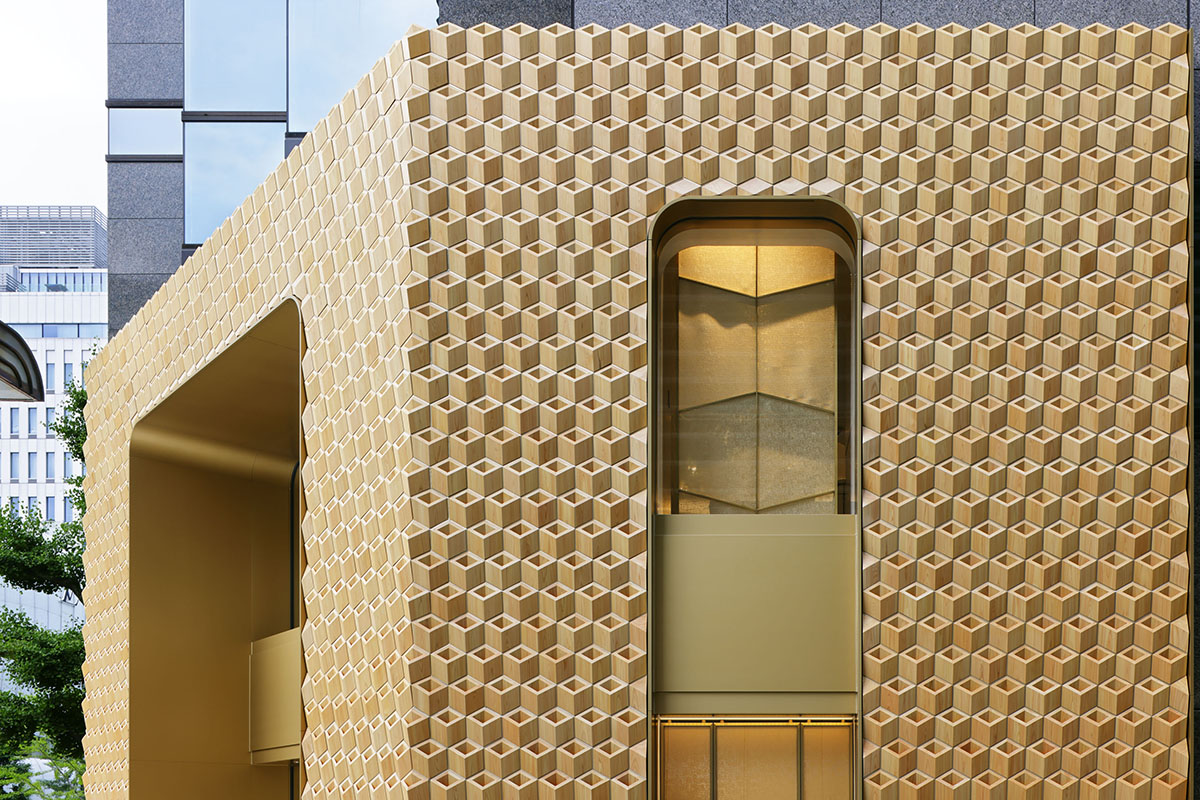 Using the local craftsmanship on design was a key focus of for the studio, for this, they worked local artisans and carpenters to reflect striking and meticulous details.

The seasoned hinoki itself hails from 60 to 70 year-old trees, all domestically sourced. The studio used 12 different hinoki units to compose the main facade, its corners, skirting and arched window details. 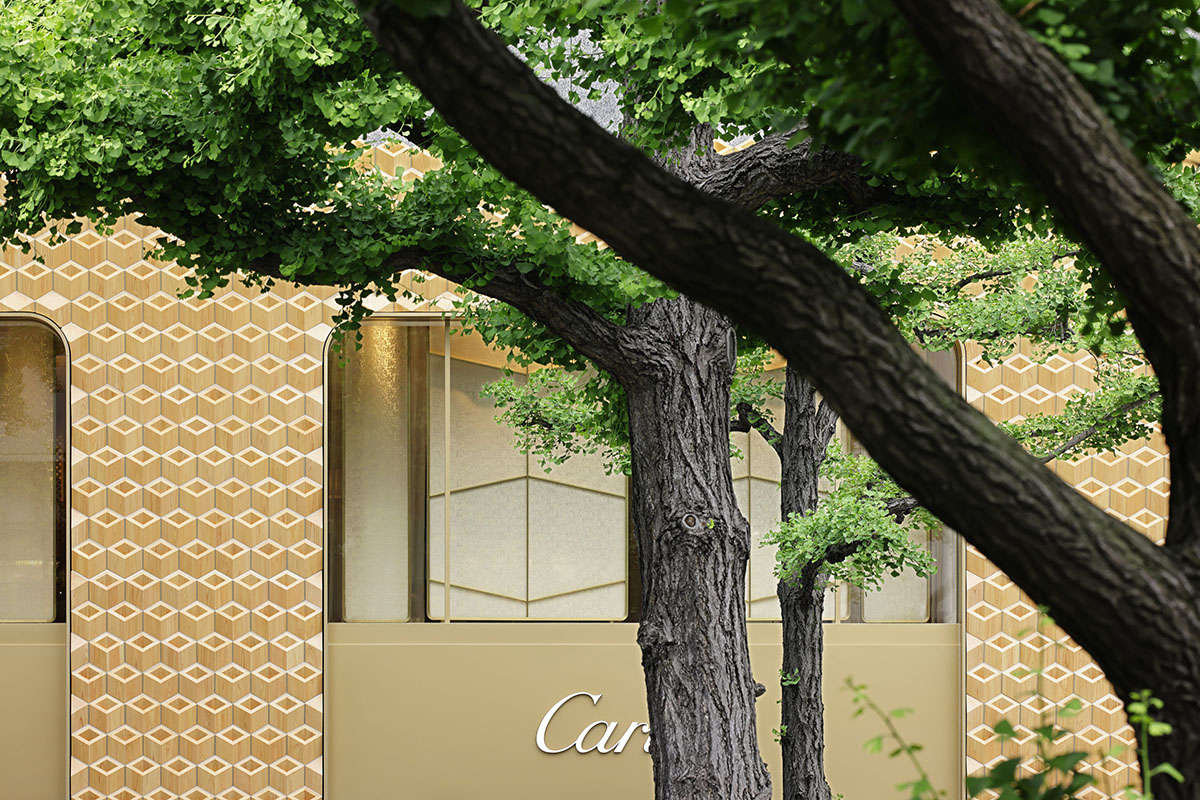 In total, the façade is made of more than 2,500 individually handcrafted units, each of them is finished by Kyoto master carpenters using time-honored joinery techniques. 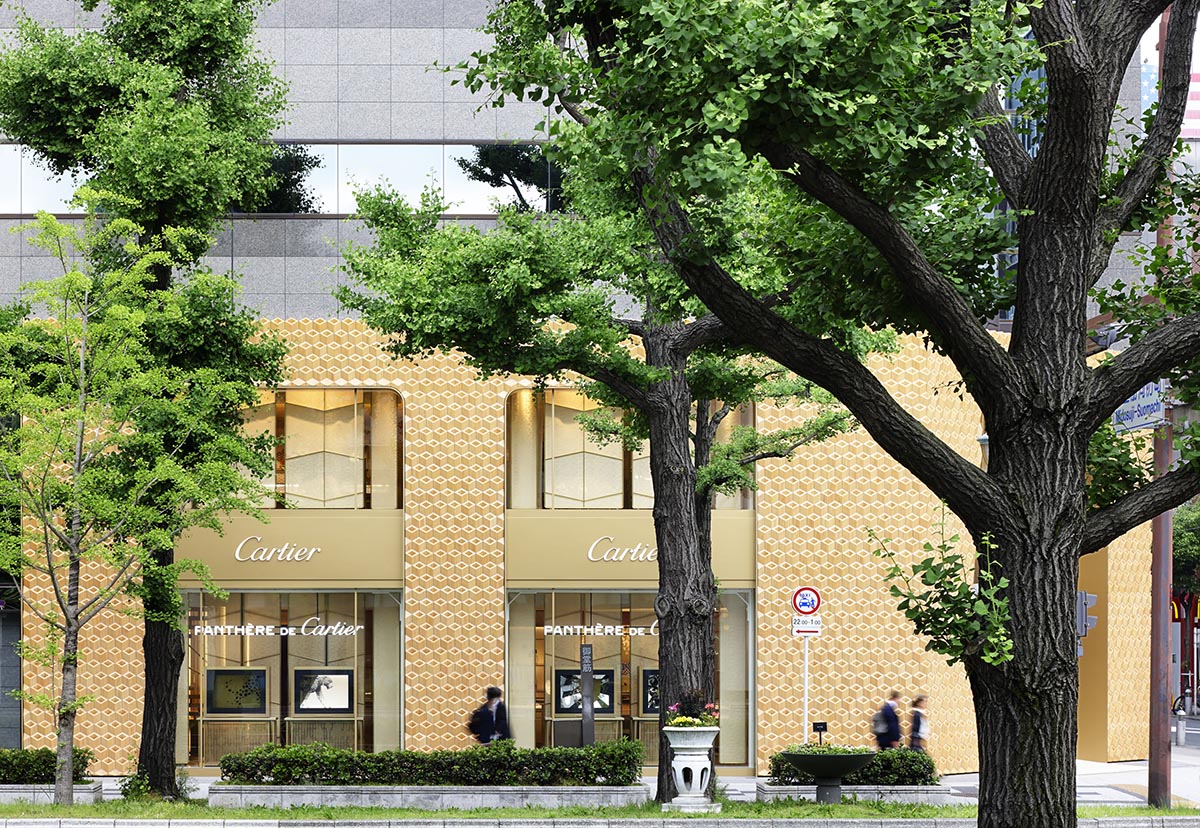 "Situated at the base of an existing building, a double-height entrance arch and side windows have been left open to draw attention to the two floors of the store," said Klein Dytham Architecture.

"With only a 200mm zone to work with between the existing building and the boundary line, the challenge was affixing the facade to the existing structure."

"For this, an aluminum frame was constructed to support the hinoki units as panels, which were lowered into place from above," the studio added. 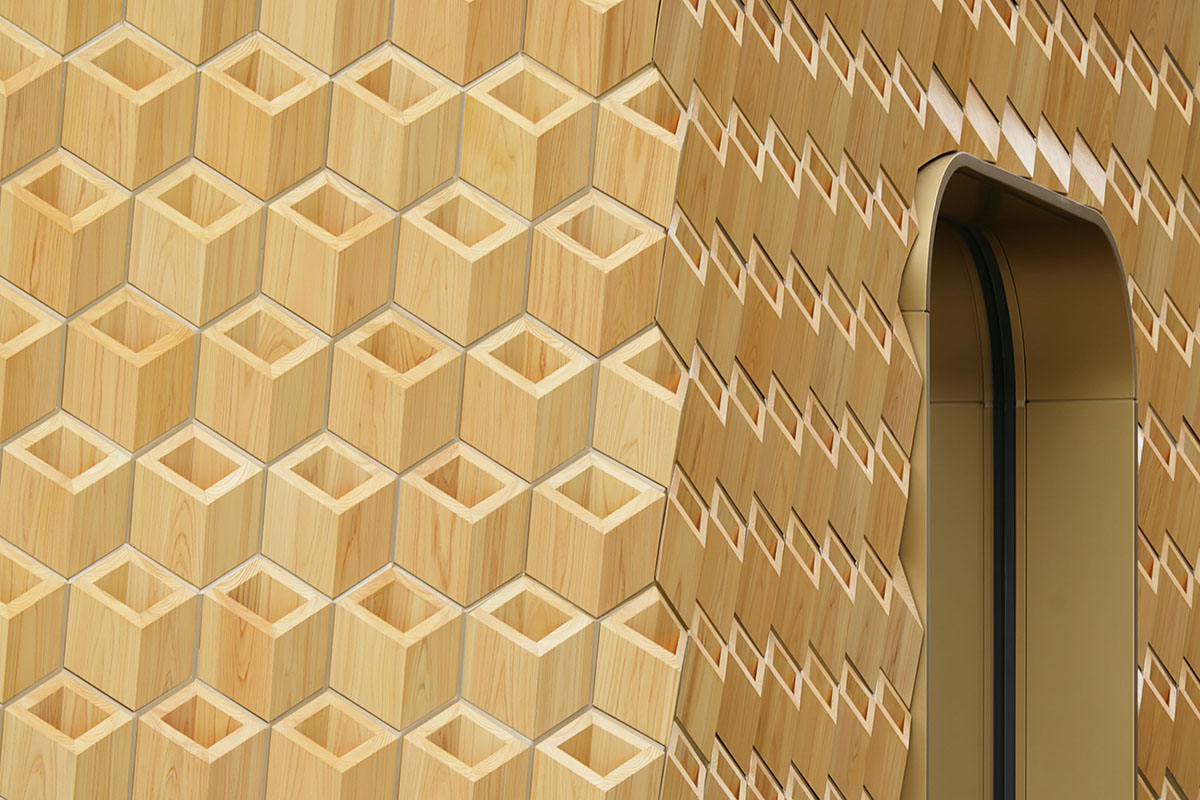 According to the team, as the hinoki material is used for temples, shrines and castles, as well as for Japanese baths and tableware, the material is naturally stable and weather resistant. 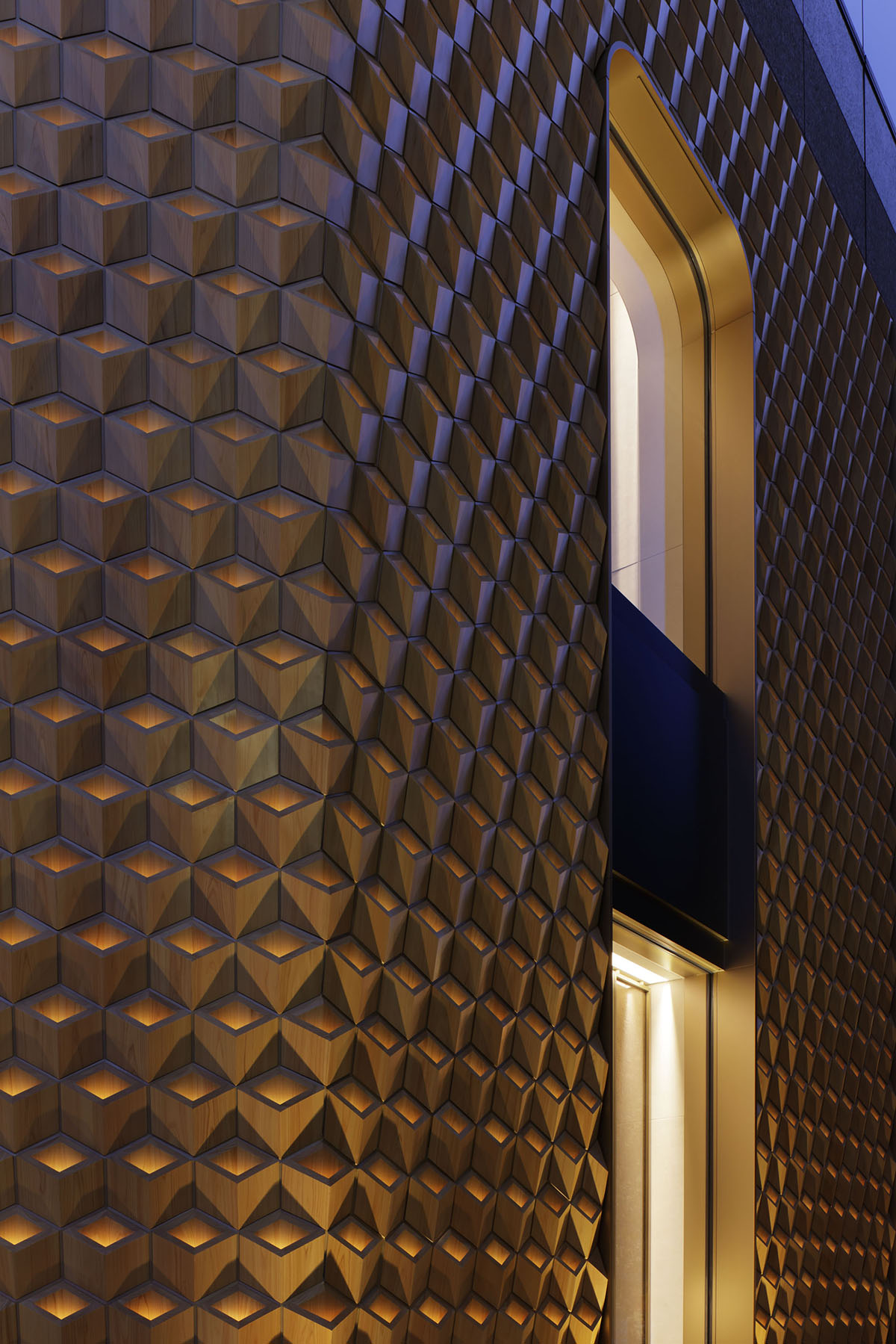 However, for the Cartier facade, the team applied UV-resistant clear lacquer on it’s natural grain and tone against a rain and harsh climate conditions.

In the day time, its northeast-facing side is lit up by morning sunlight, enhancing the wood’s characteristic beauty. Osaka, though, is as much alive in the evening as it is during shopping hours. 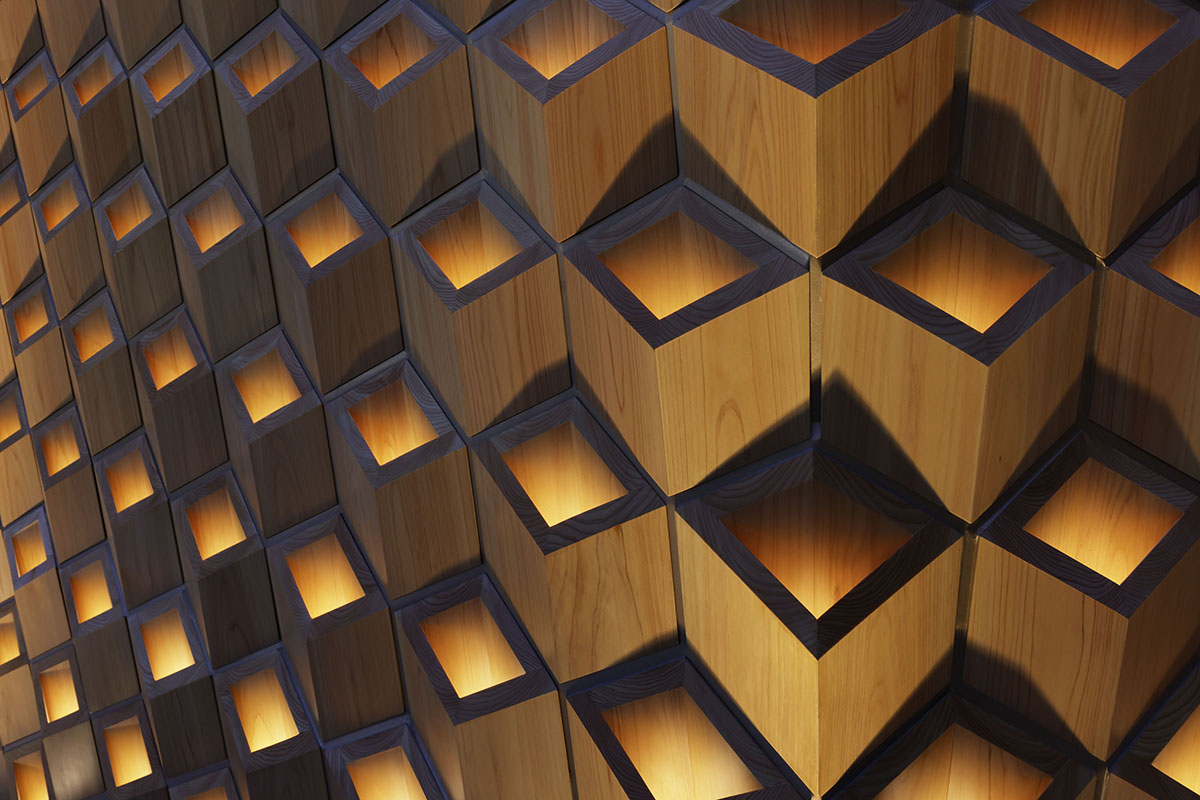 To keep the facade striking at night, the architects placed individual LED lights behind each unit to illuminate the structure. Diffused by the box-like diamond of each section, the effect not only increases the three-dimensionality of the facade, but gives it an inviting warm glow. 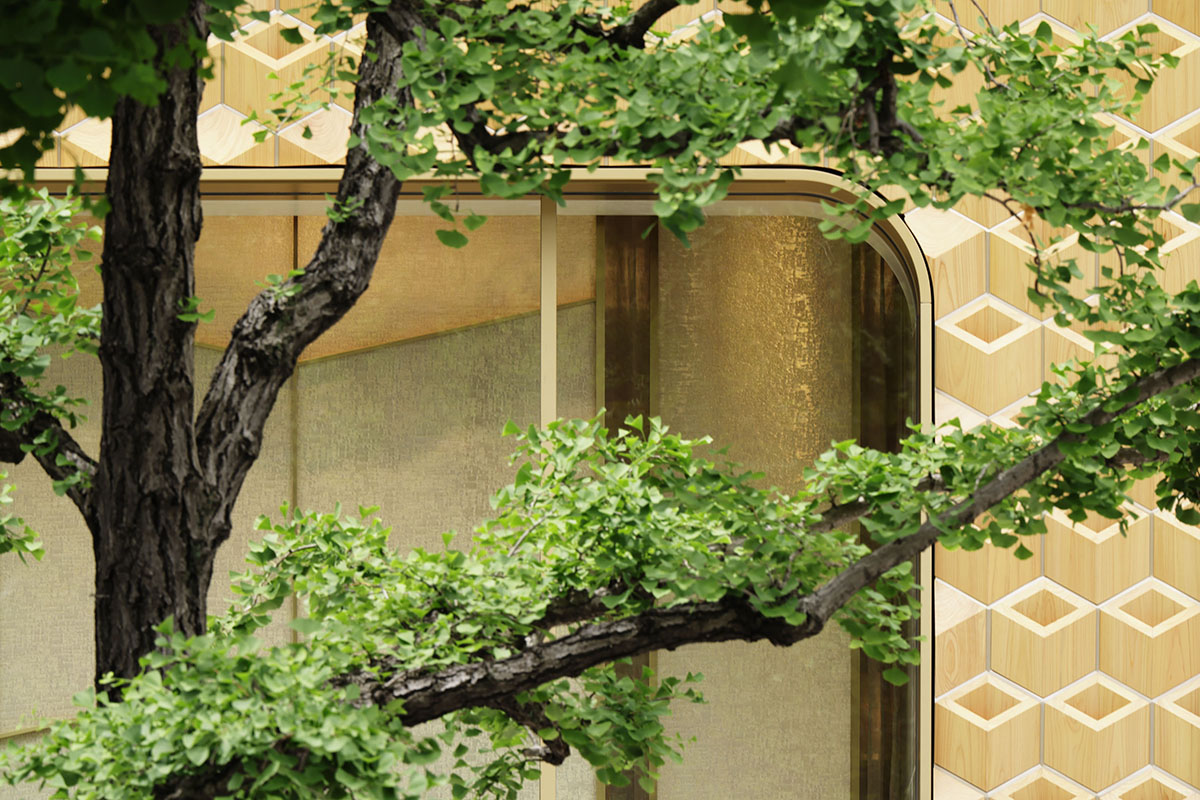 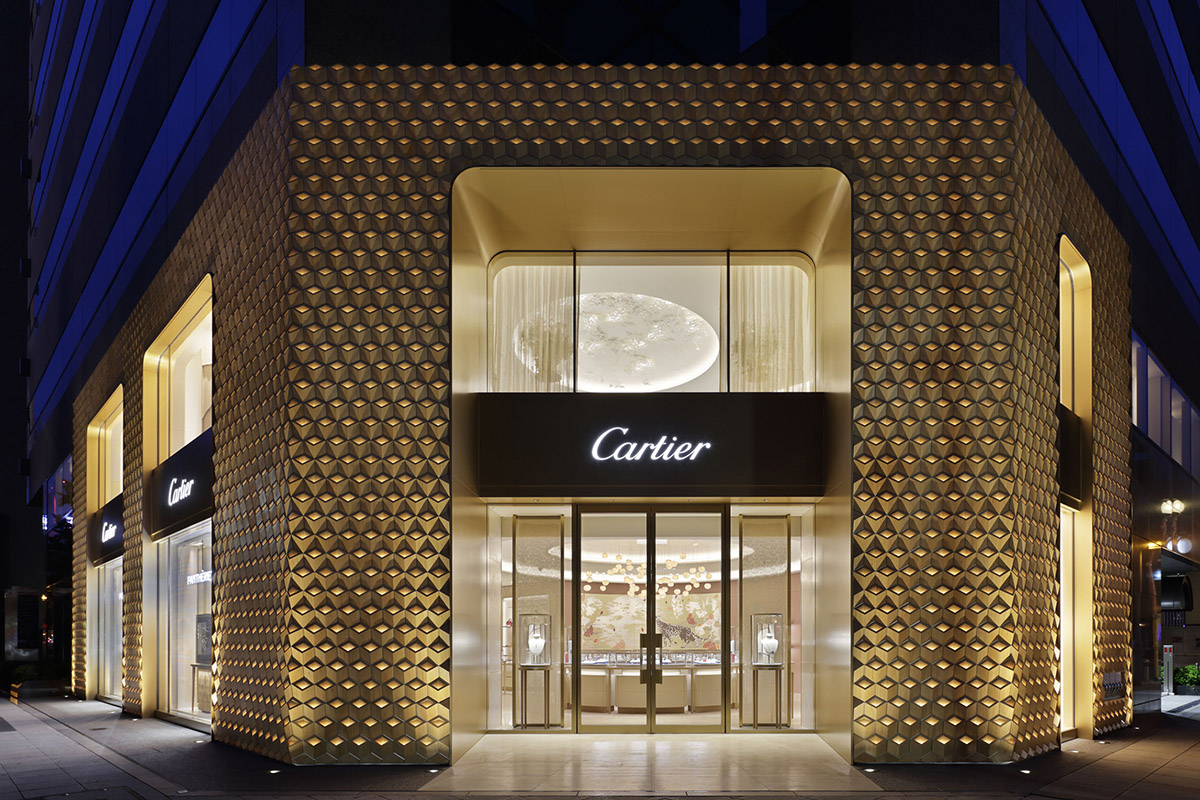 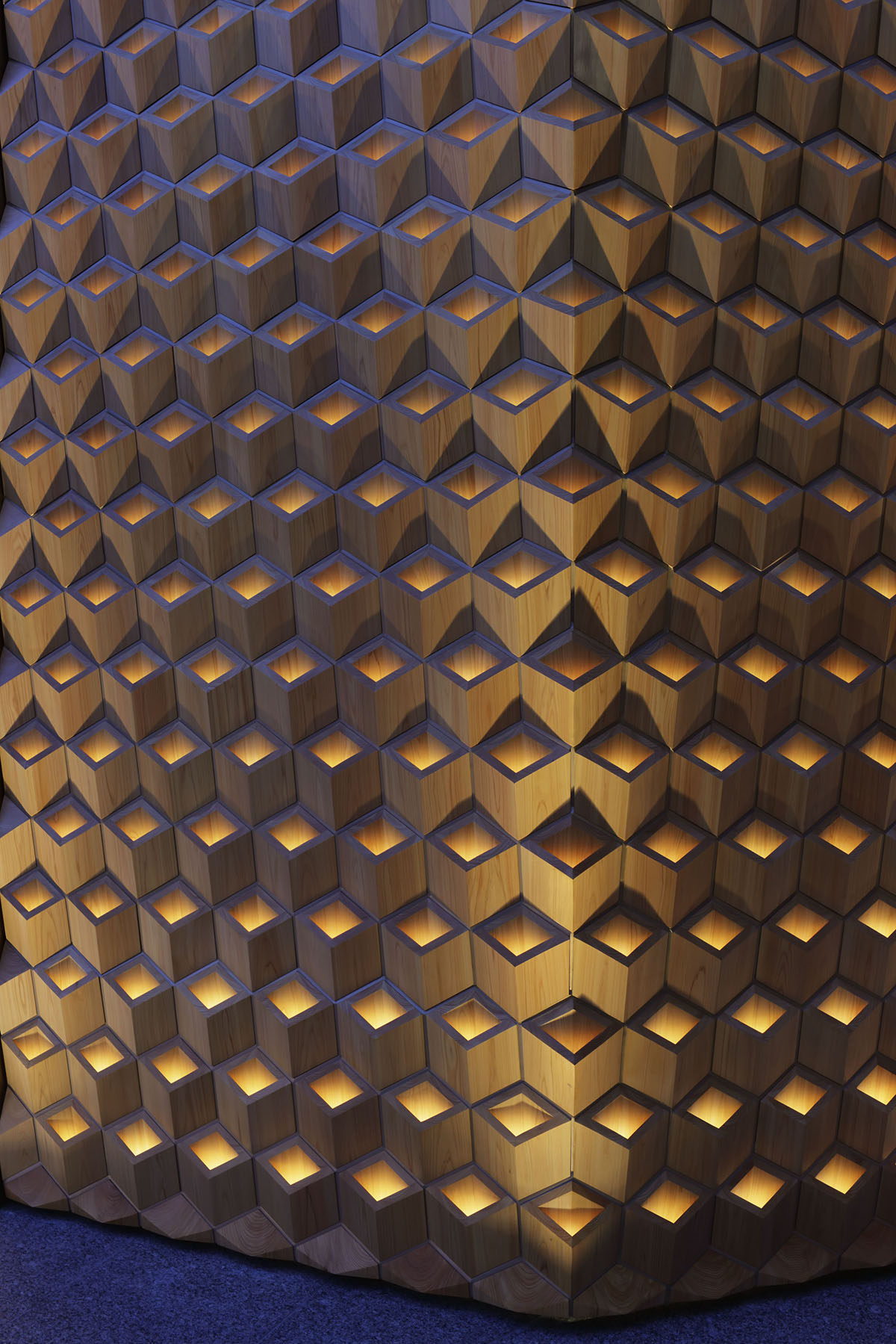 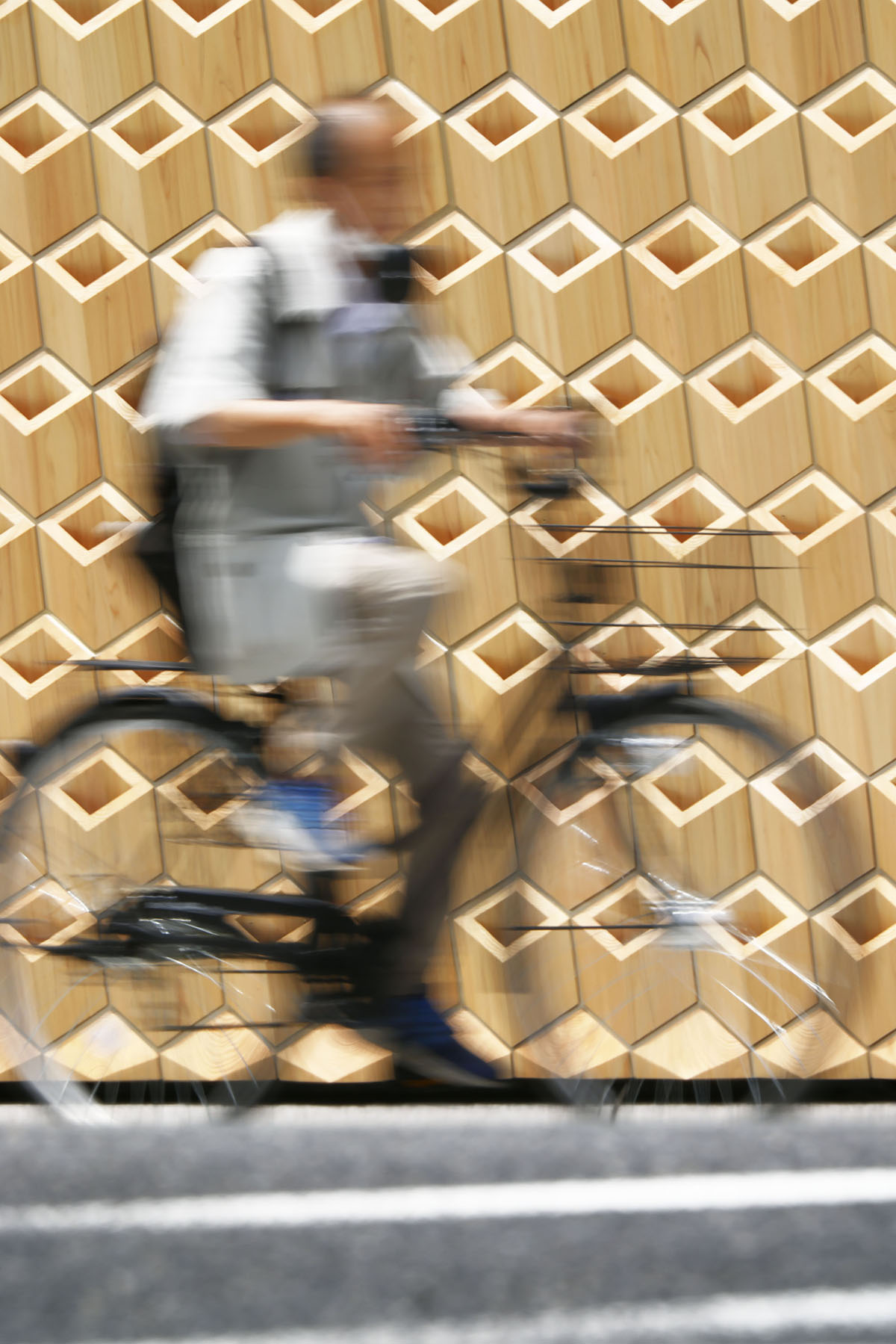 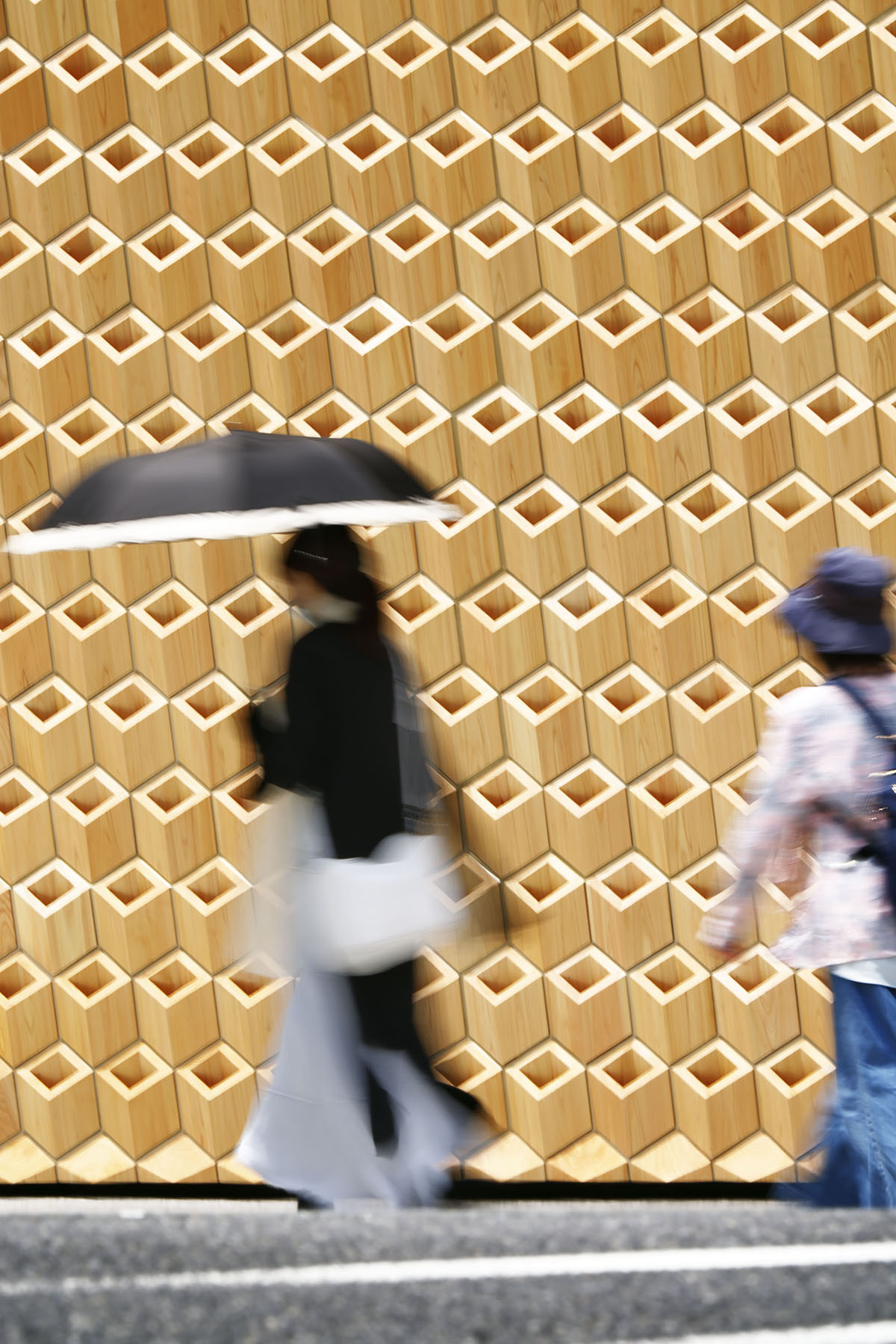 Klein Dytham Architecture previously completed a clubhouse and activity centre for families and kids in the northern corner of Tochigi prefecture in Japan.

All images courtesy of Cartier.