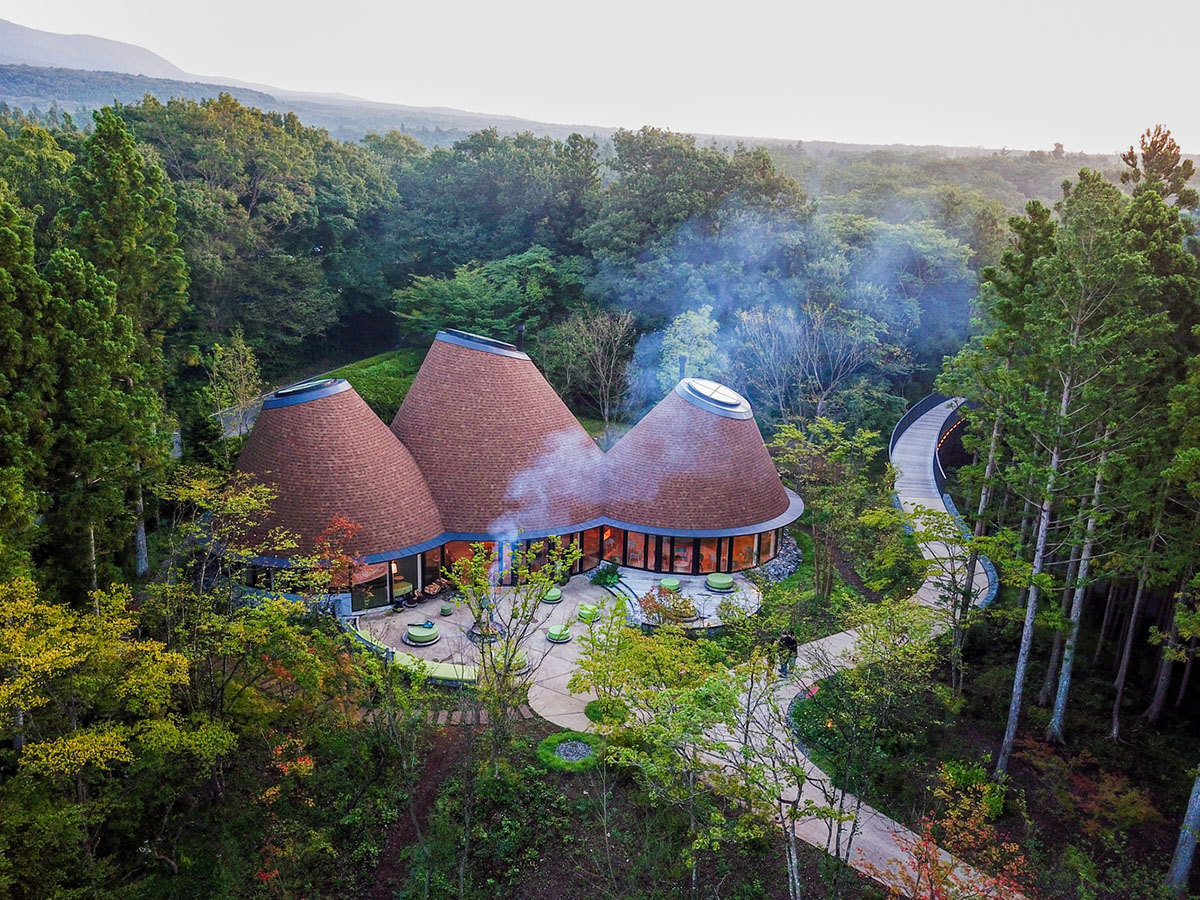 Tokyo-based architecture practice Klein Dytham Architecture has completed a clubhouse and activity centre for families and kids in the Nasu Highlands located in the northern corner of Tochigi prefecture in Japan.

Named PokoPoko Club House, the 300-square-metre activity centre, situated within a lush forest, was built to connect two hotel buildings on the current site, the clubhouse is accessed via pathways within the forest. 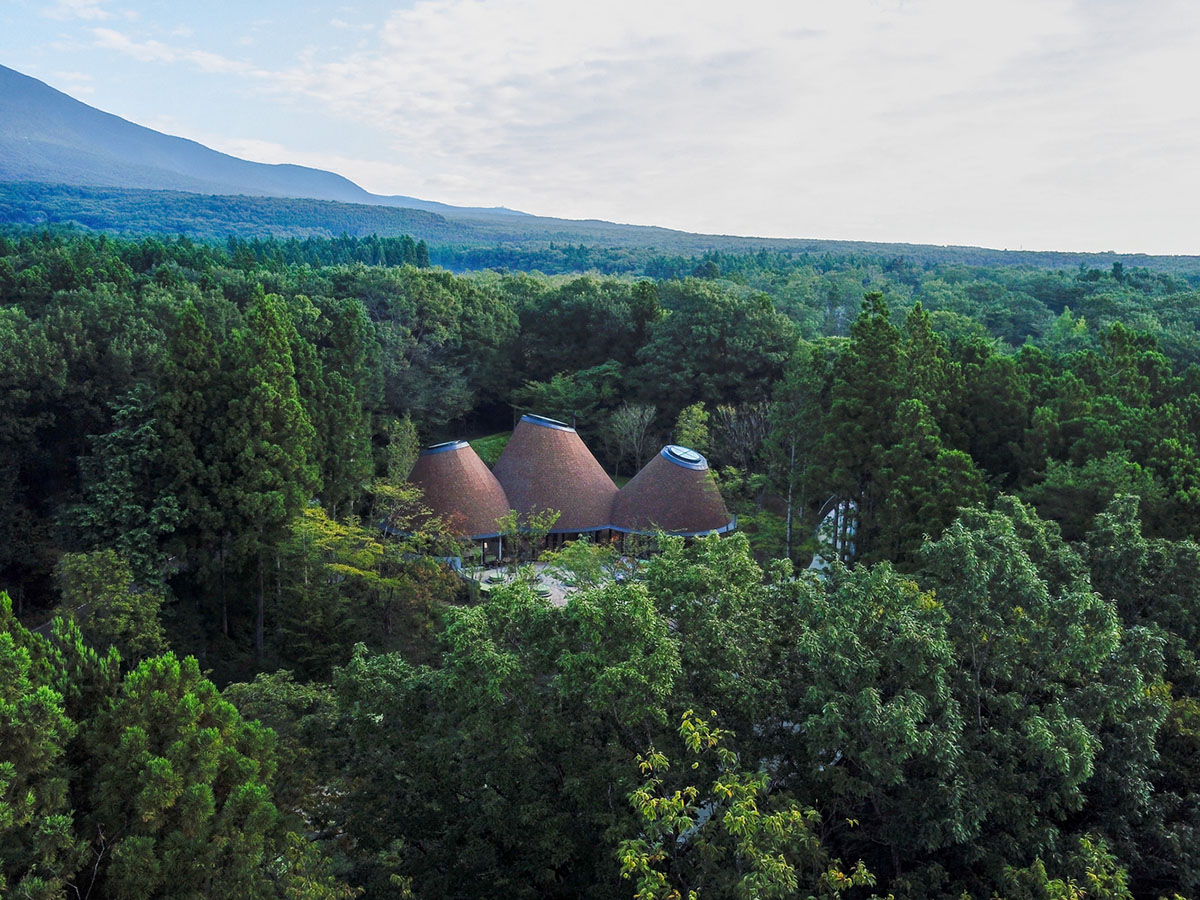 "It takes no more than 75 minutes by bullet train fromTokyo to the center of this lush farming region which is dominated by Mount Nasu," said Klein Dytham Architecture.

For the project, the overall vision included an extension and renovation of both buildings and rooms, an original smaller guest house from 1986 and its later addition, bringing the total number of rooms on site to 40. 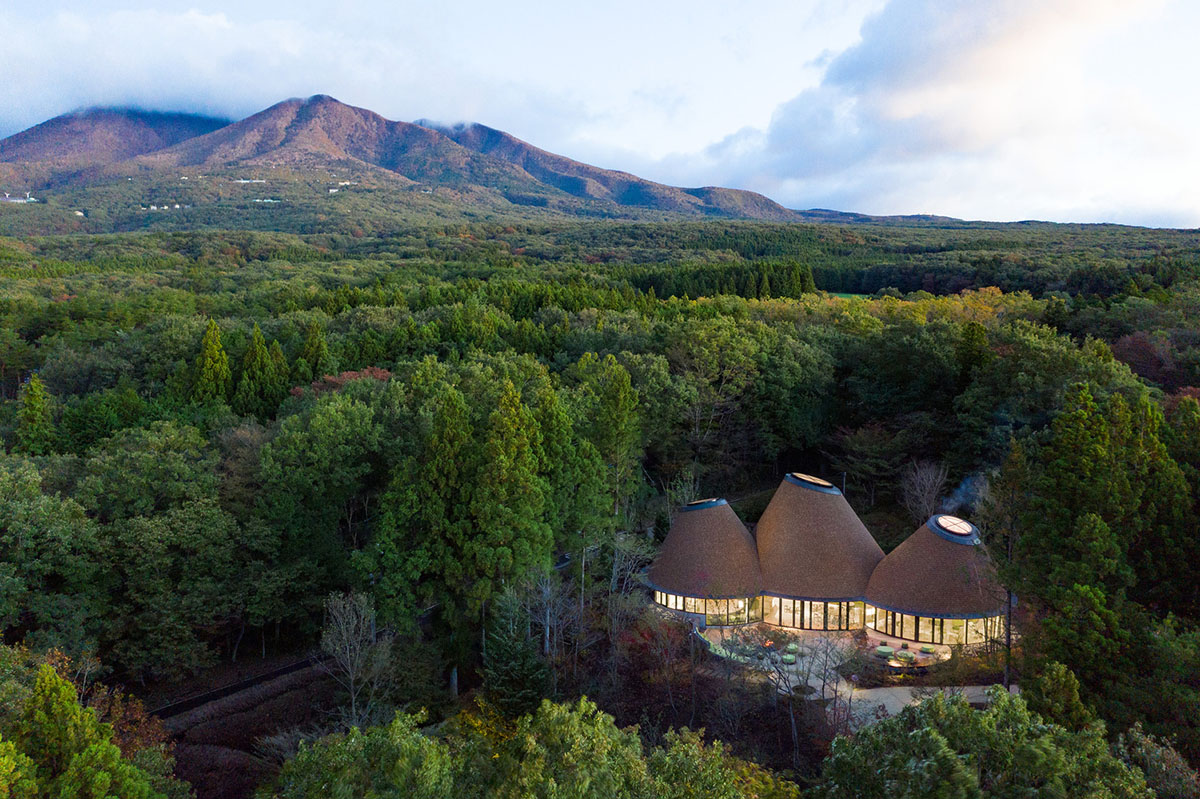 The clubhouse is composed of three circular structures that are intertwined each other. Their connected timber cones mark the structure from afar and inside they have different functions and unique to its form. 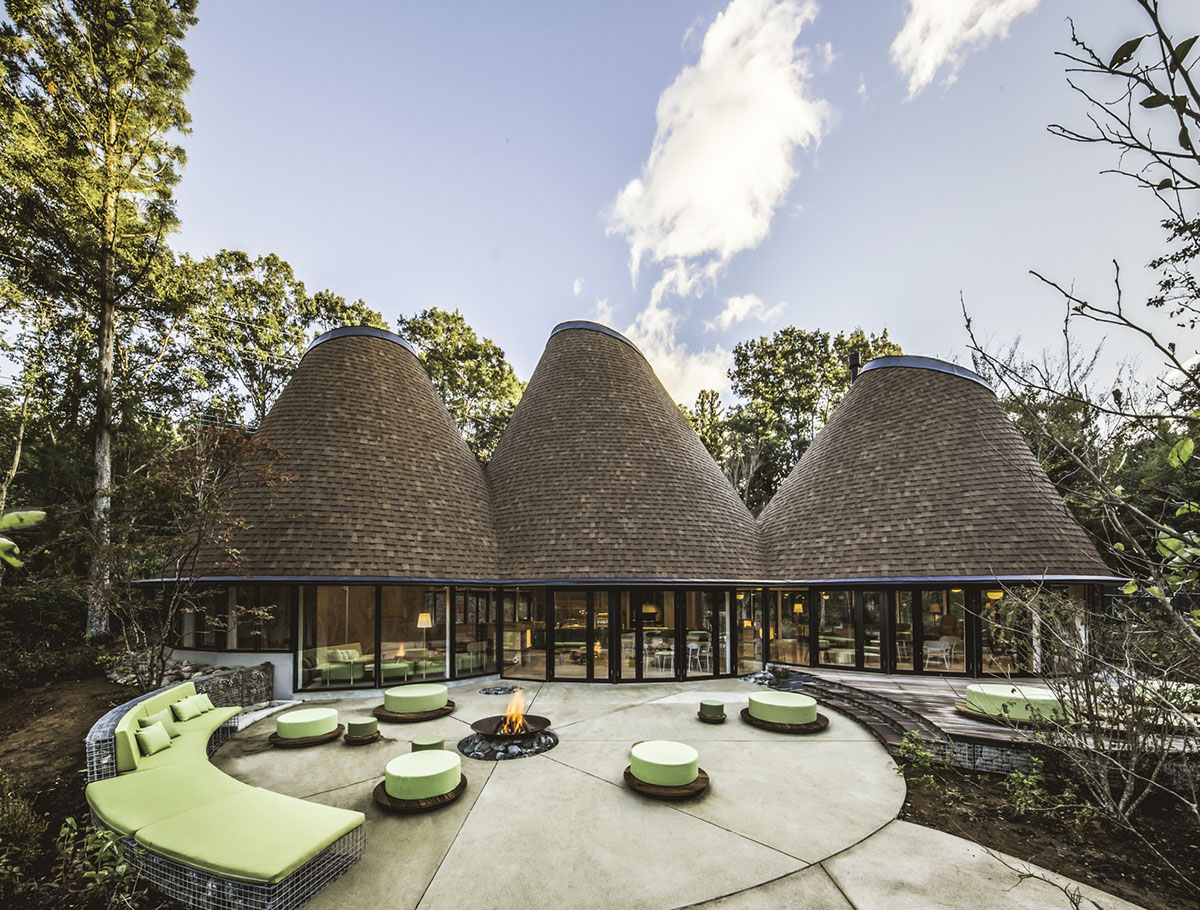 Described as a "fairy tale", three timber roof cone speak out lightheartedly in different directions from the top of the trees. As the architects highlight, "this is where the building get’s it name from as ‘PokoPoko’ means to stick-out or stick-up in Japanese."

"A new footbridge forms a subtle link and between the two complexes a new path meanders through the lush forest. And like in a fairy tale, halfway there is a wood clearing with a contemporary cottage: PokoPoko," added the studio. 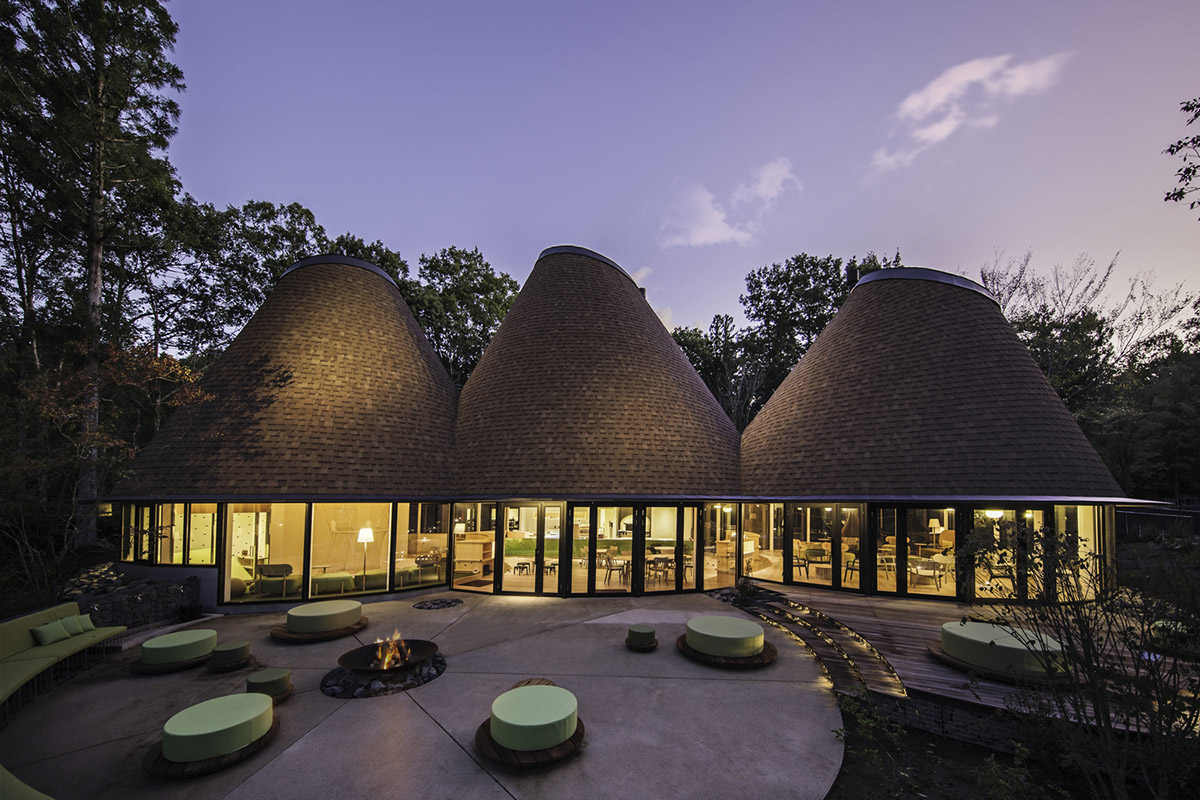 The clubhouse serves to the guests of the hotel. Each timber roof cone has its own function and their functions can understandable from the interiors of the structures as their size also vary.

For instance, the middle cone is used for cooking activities based on fresh ingredients grown on the hotel’s own premises. 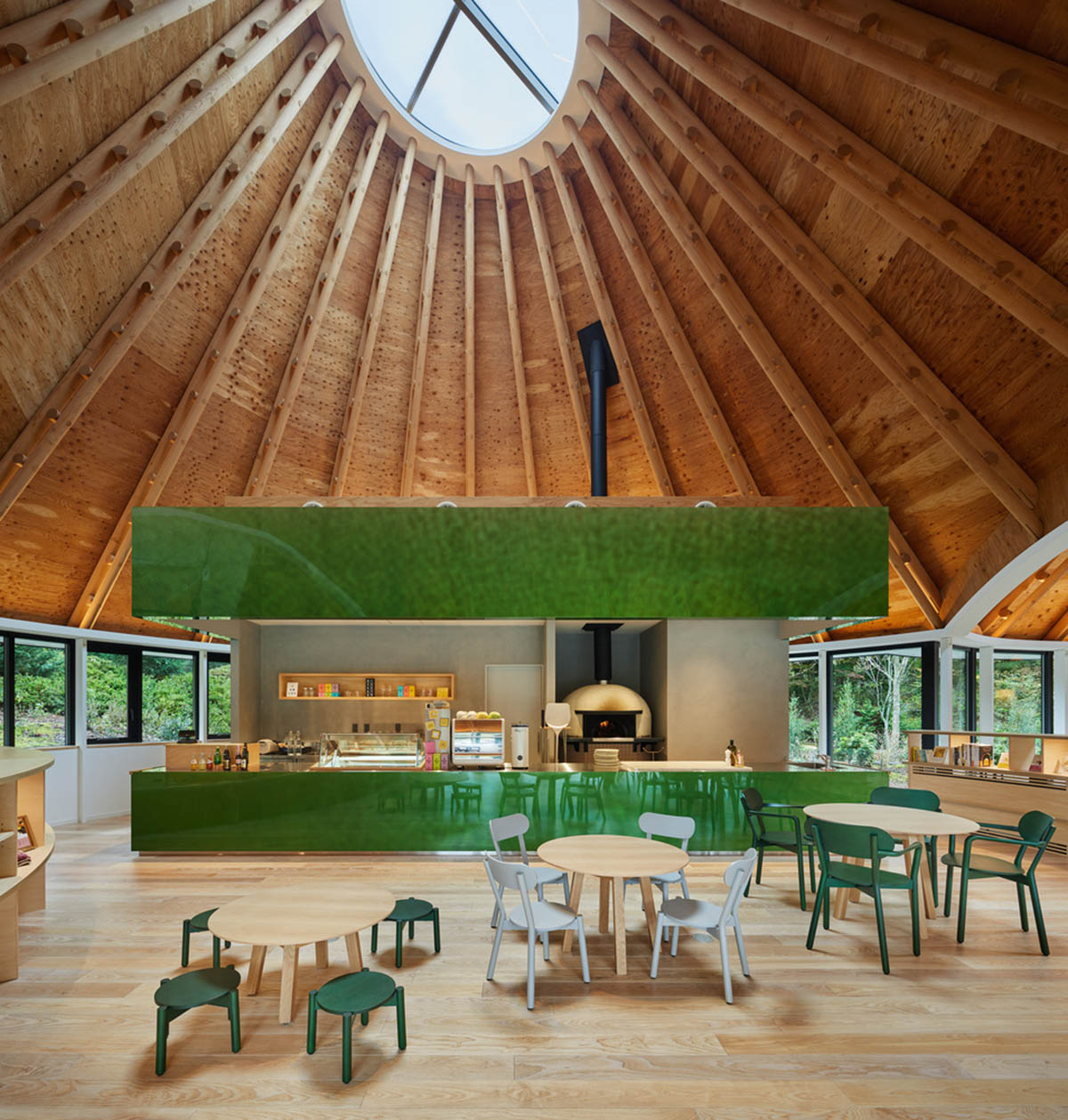 There are variety of food-related workshops that keeps kids and parents entertained preparing their own jams and pickles. A big wood-log oven offers an opportunity to make their own pizza with vegetables and herbs just picked from the nearby fields.

In an adjacent cone, can also be seen from the middle cone, the architects placed a tall white net structure to entice the kids to climb all the way up towards the skylight, while smaller kids can delight in a ball pool at the bottom. 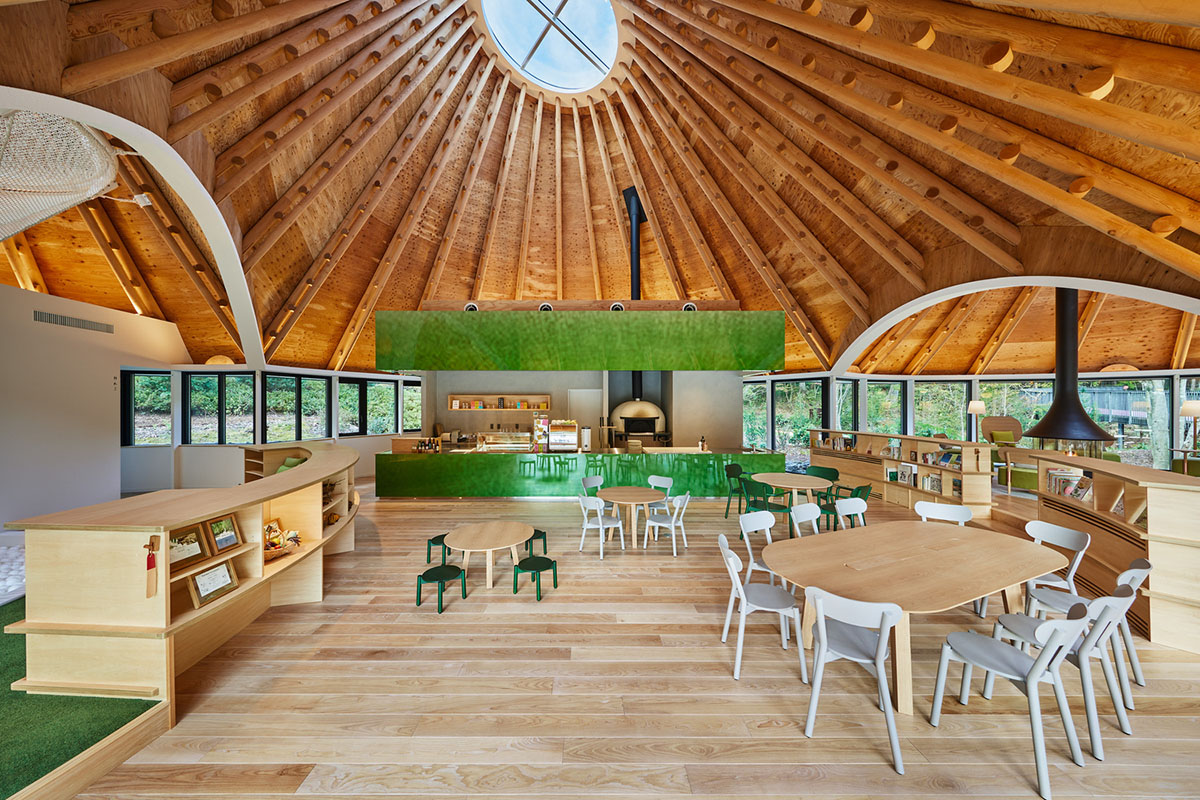 "This indoor playground offers the kids the freedom to release their energy even when the weather gets too gloomy to play outside," added the architects.

When the kids tire themselves out, parents can also relax around the open fireplace under the roof cone on the opposite side. 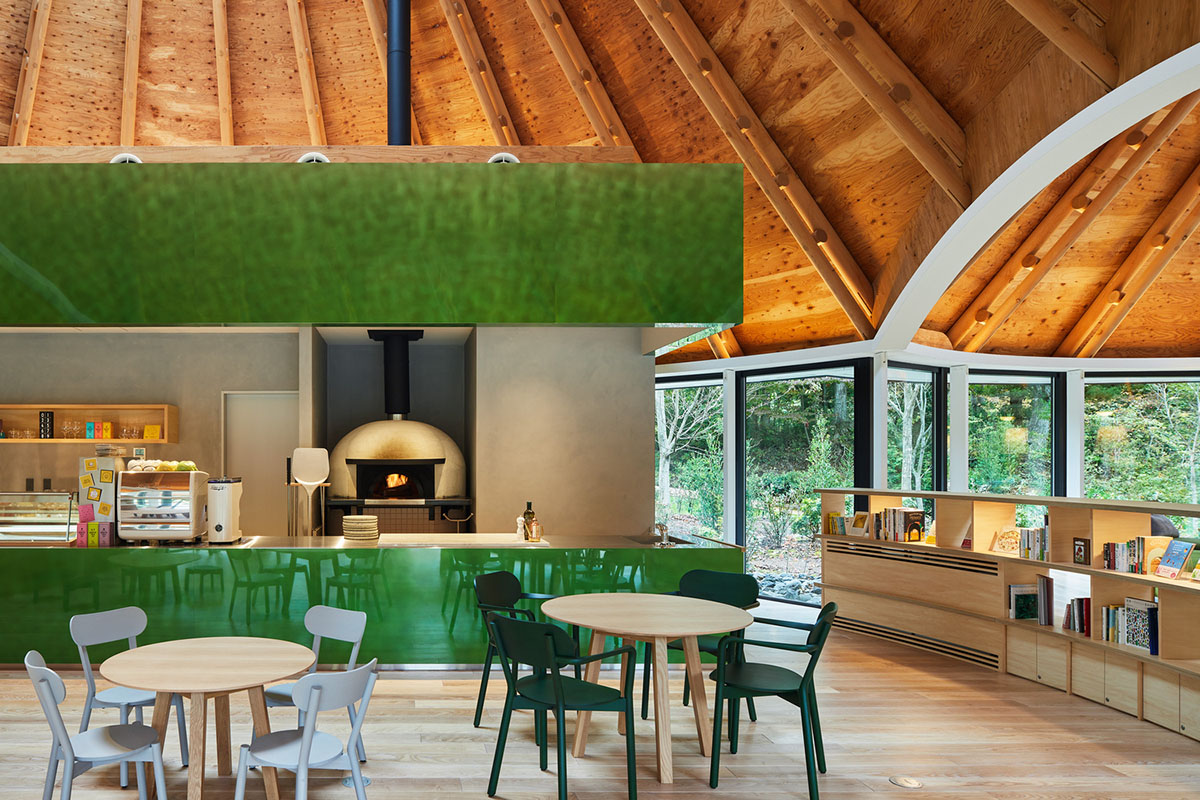 The hotel guests sit around the fire, on Klein Dytham architecture’s Dora Dora furniture with their favorite drink, reading a book, gazing in the flames, reminiscing childhood memories of camping in the woods, toasting marshmallows on a bonfire. Or, simply enjoying the 360° view to the surrounding trees. 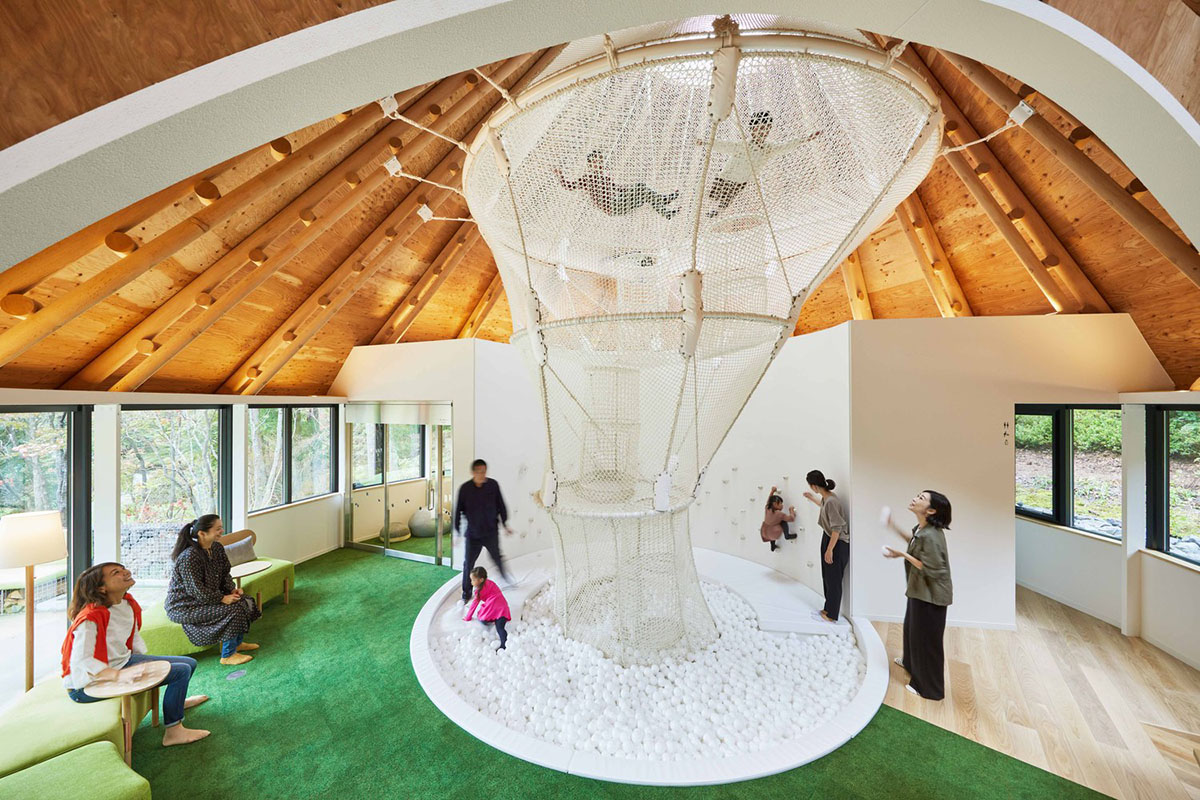 As the studio emphasized, "PokoPoko can be both a lively and a peaceful place, seamlessly connecting to the forest outside, making one feel like having spent a day in nature even on a rainy day."

For the materials of the roofs, the architects used local pine. "Two slender timber members with spaced off-cuts form beams, which rise from a lower steel ring beam to a smaller ring which is a part of the roof light," the architects continued.

"The beams are skinned with plywood sheets to form a tensioned skin." 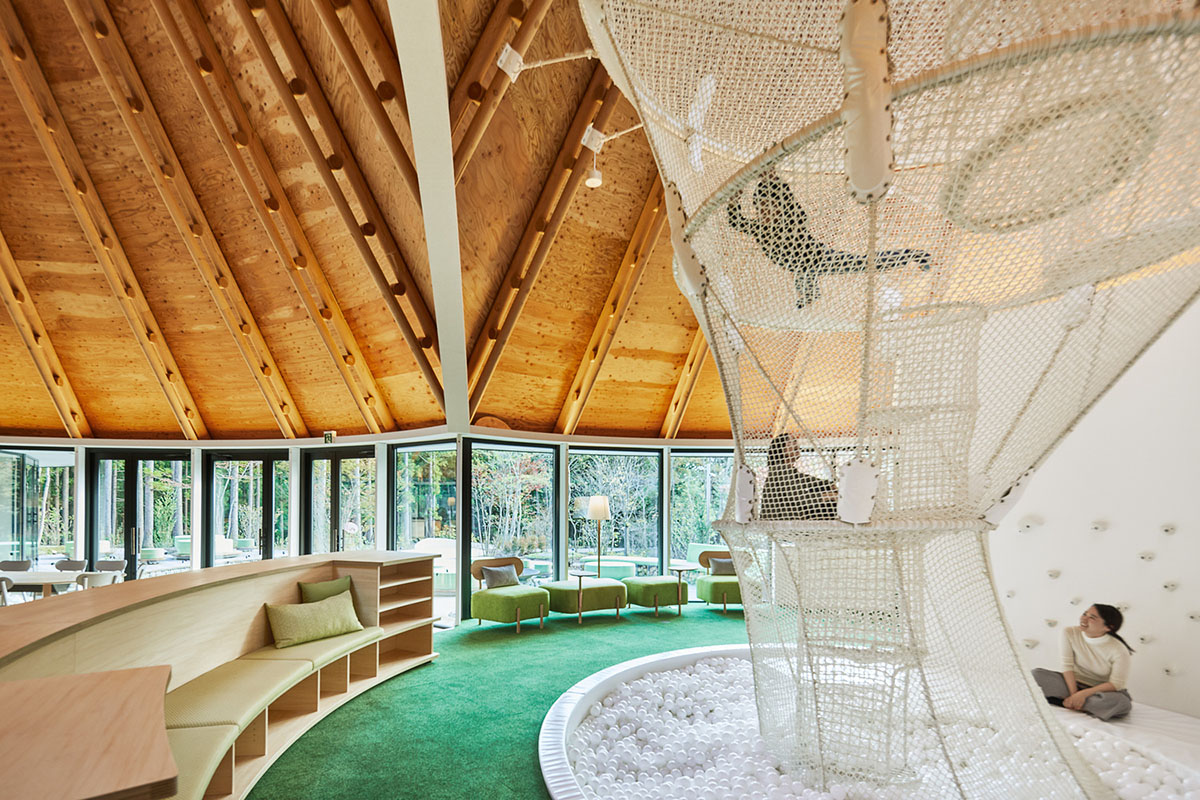 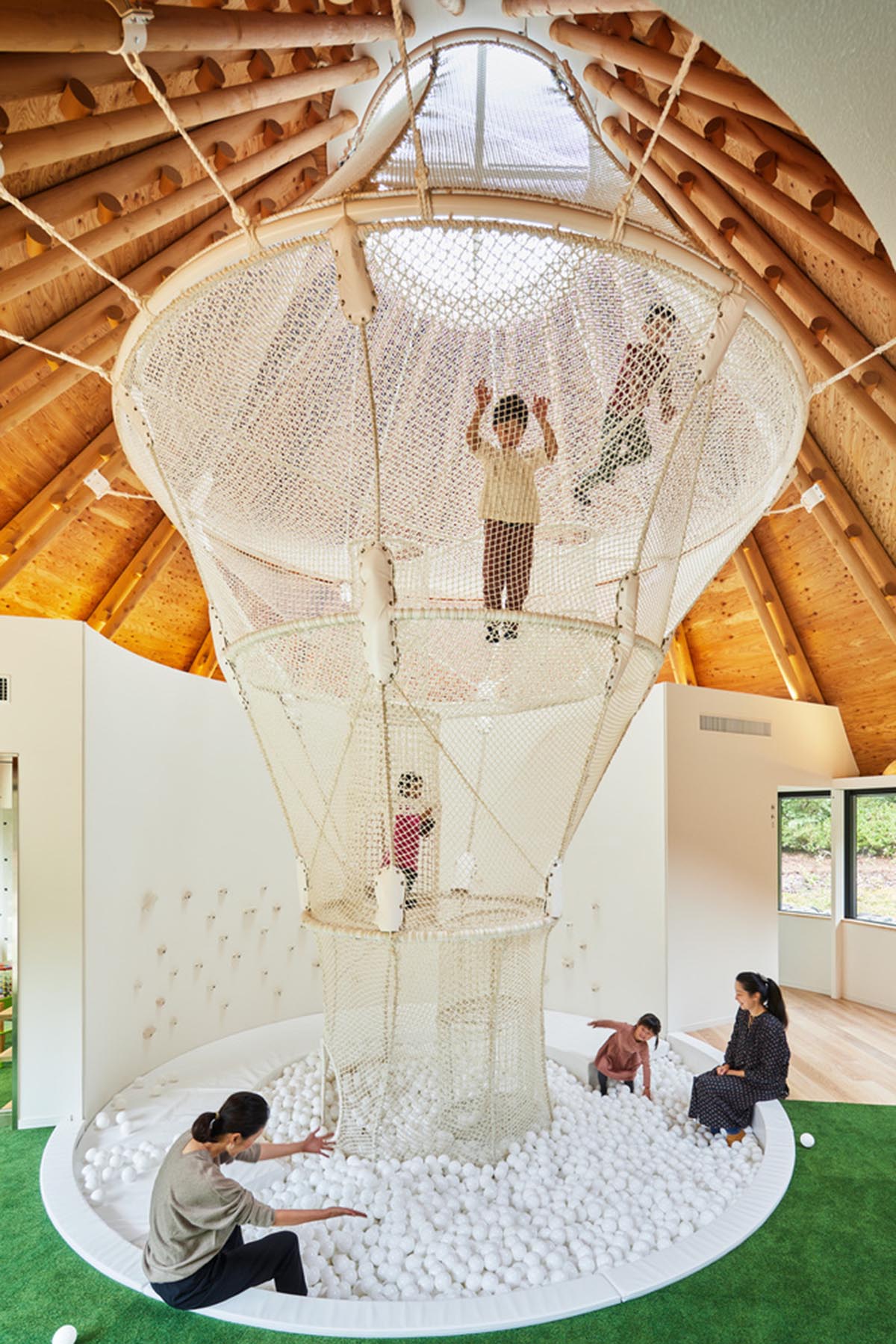 They used a layer of rigid insulation made of a grid of timber battens, forming a ventilated cavity, which in turn gets skinned by another layer of plywood, which along with a breather paper layer forms the base for the shingle roof. 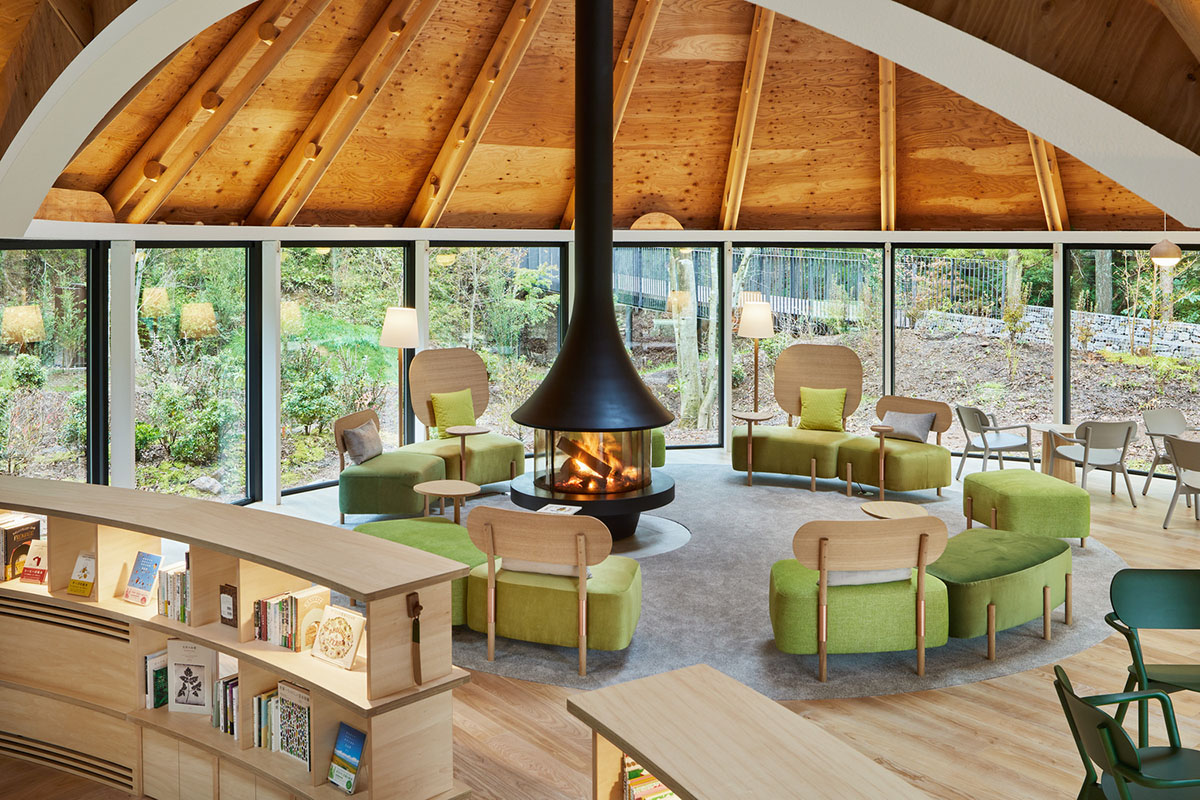 According to the architects, "the project has been an instant success and the hotel and clubhouse have been in demand as people look too to take timeout from Japans cities and head to the country side for staycations which are conducive to social distancing." 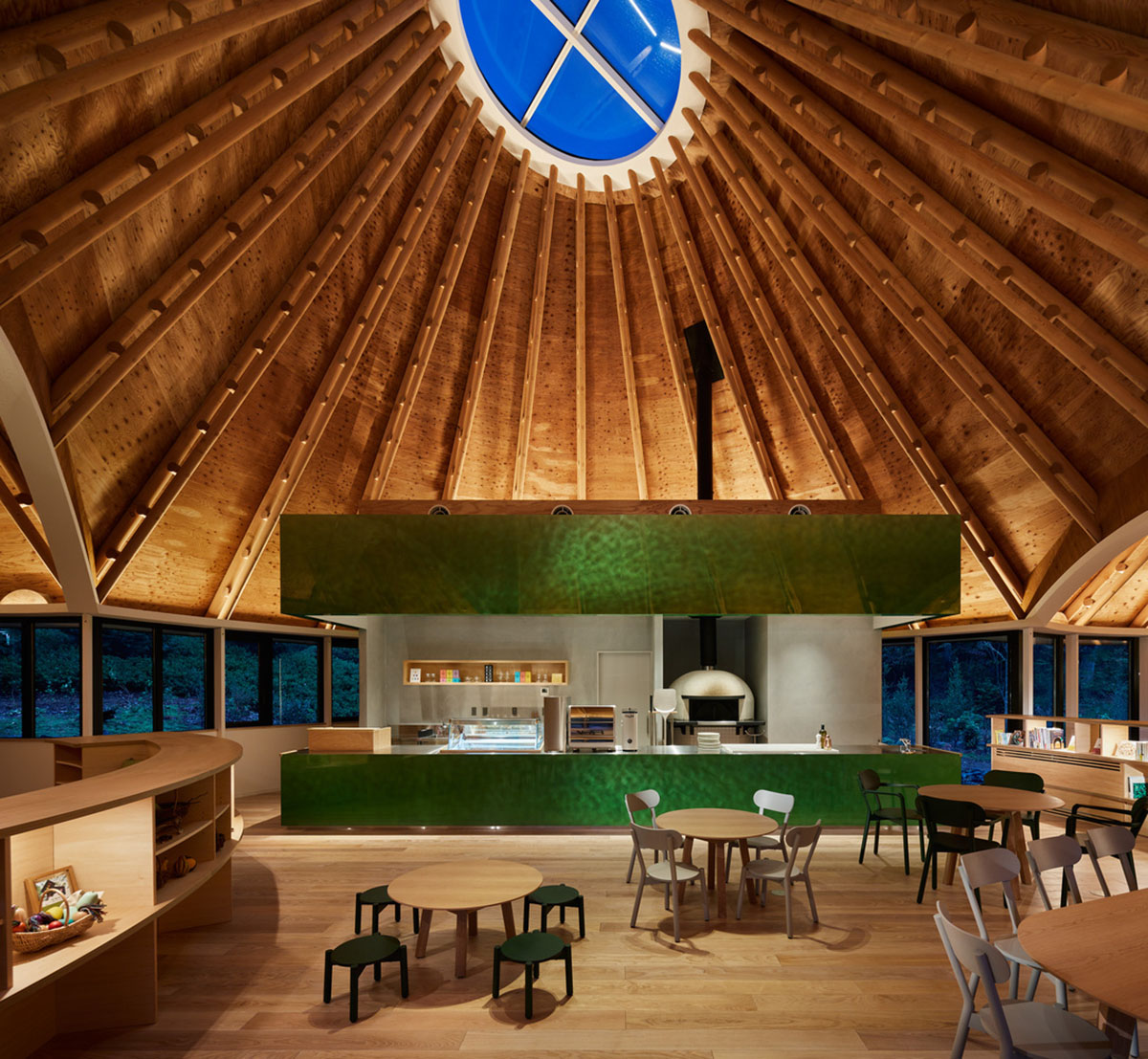 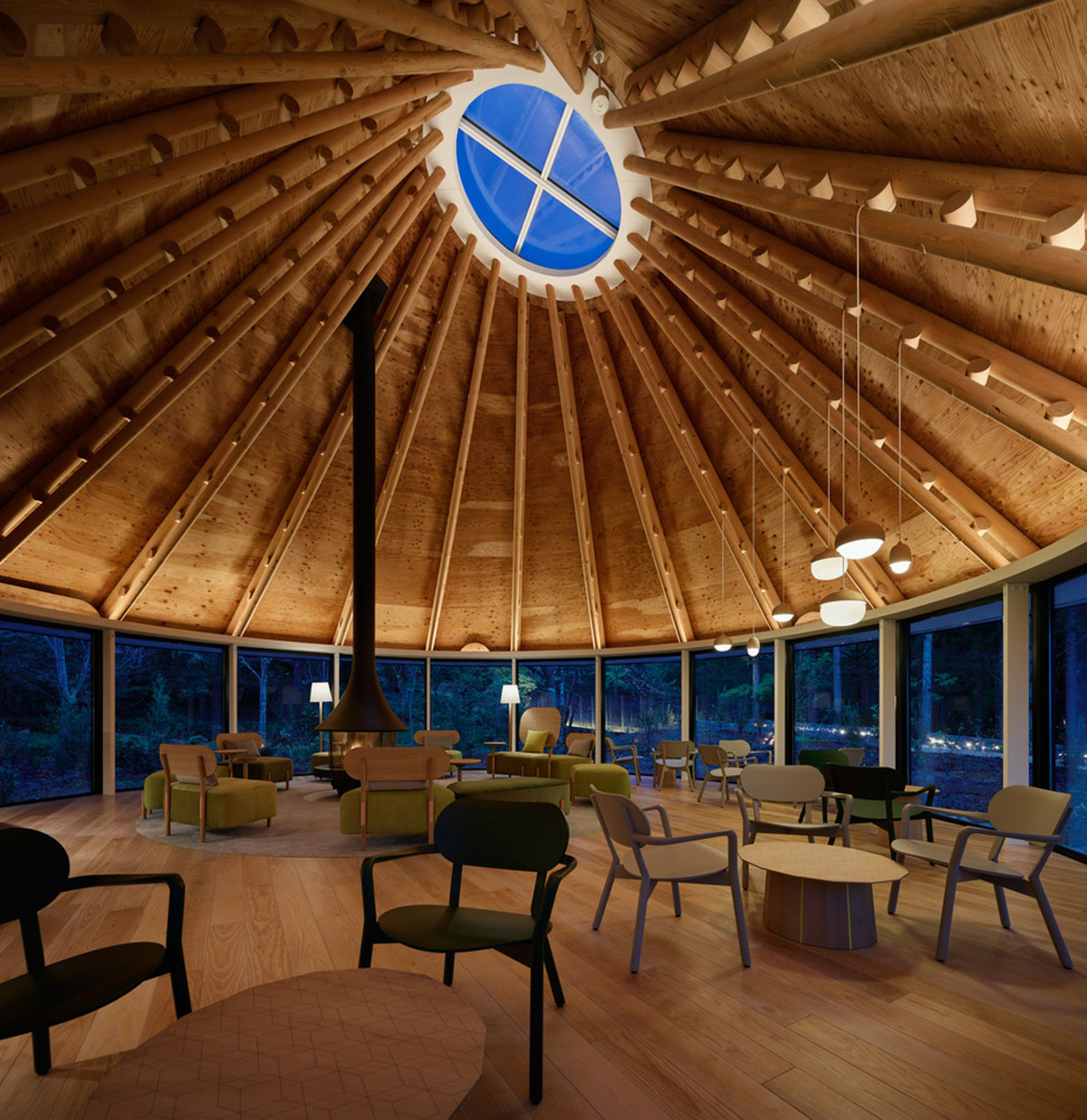 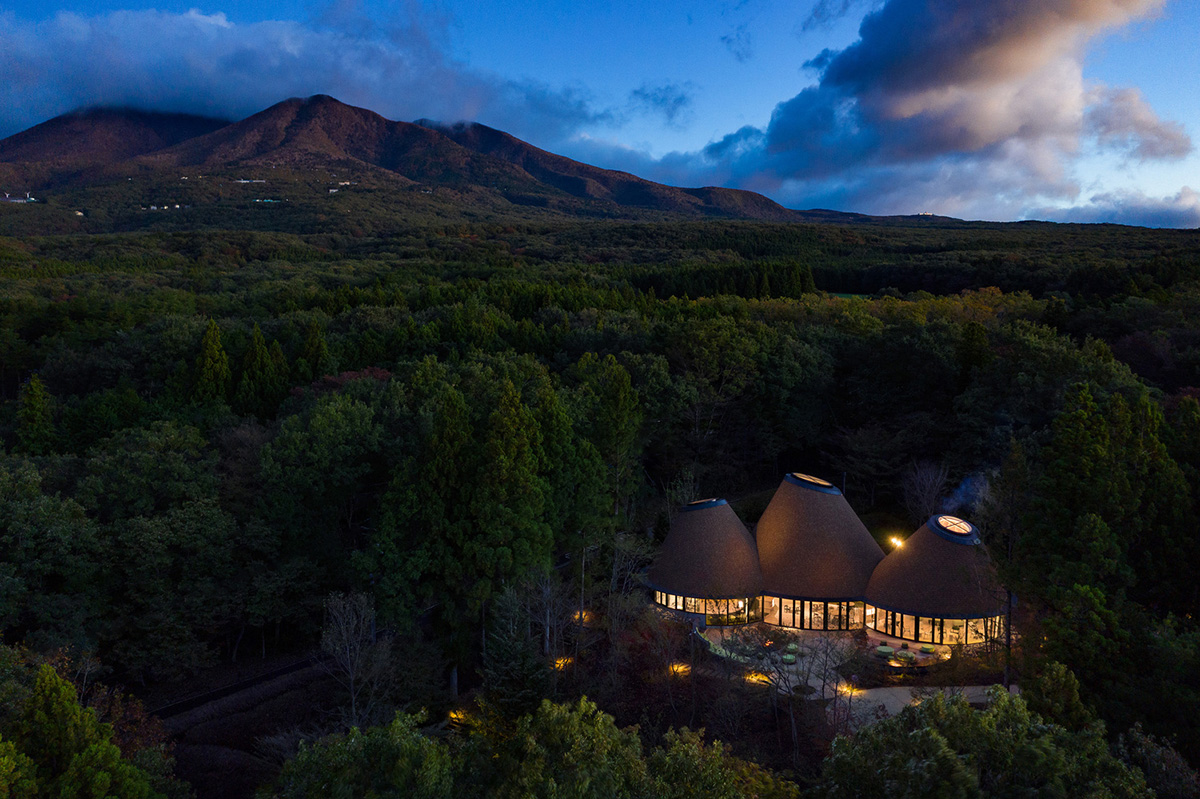 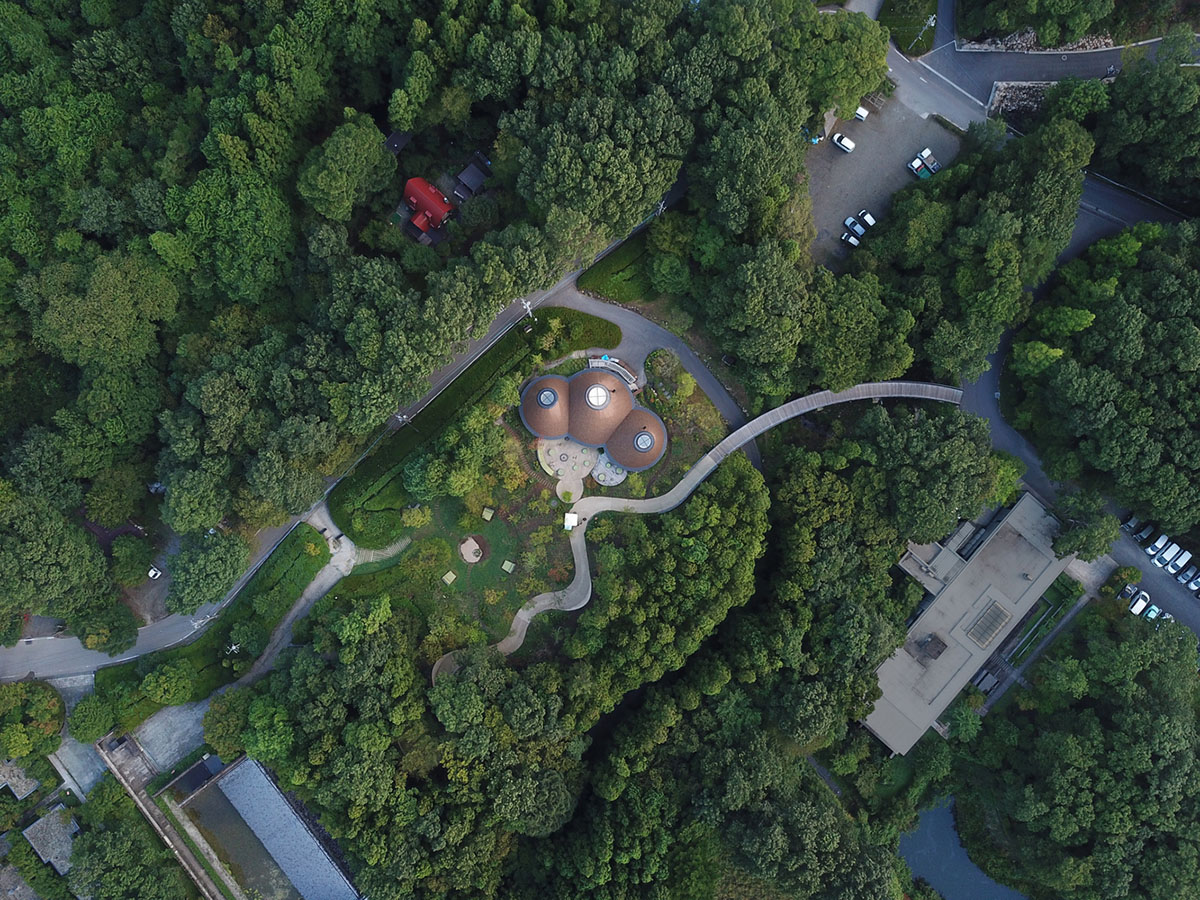 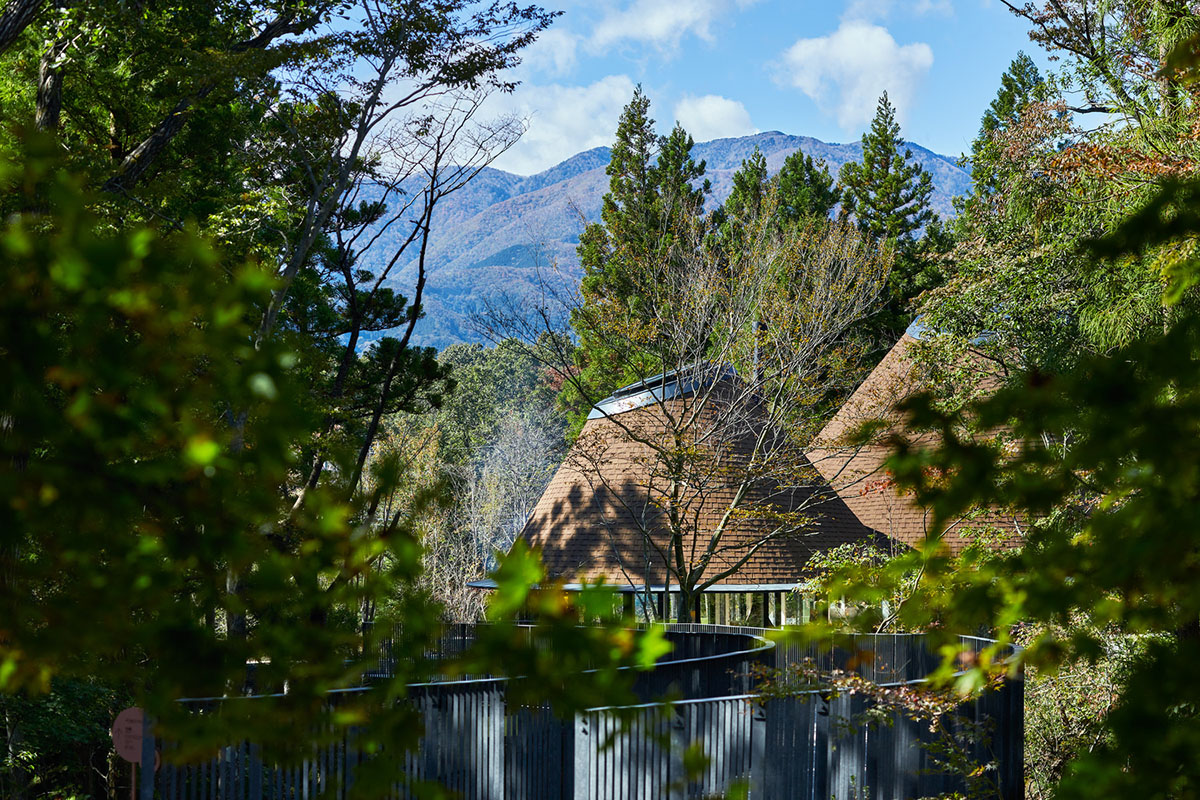 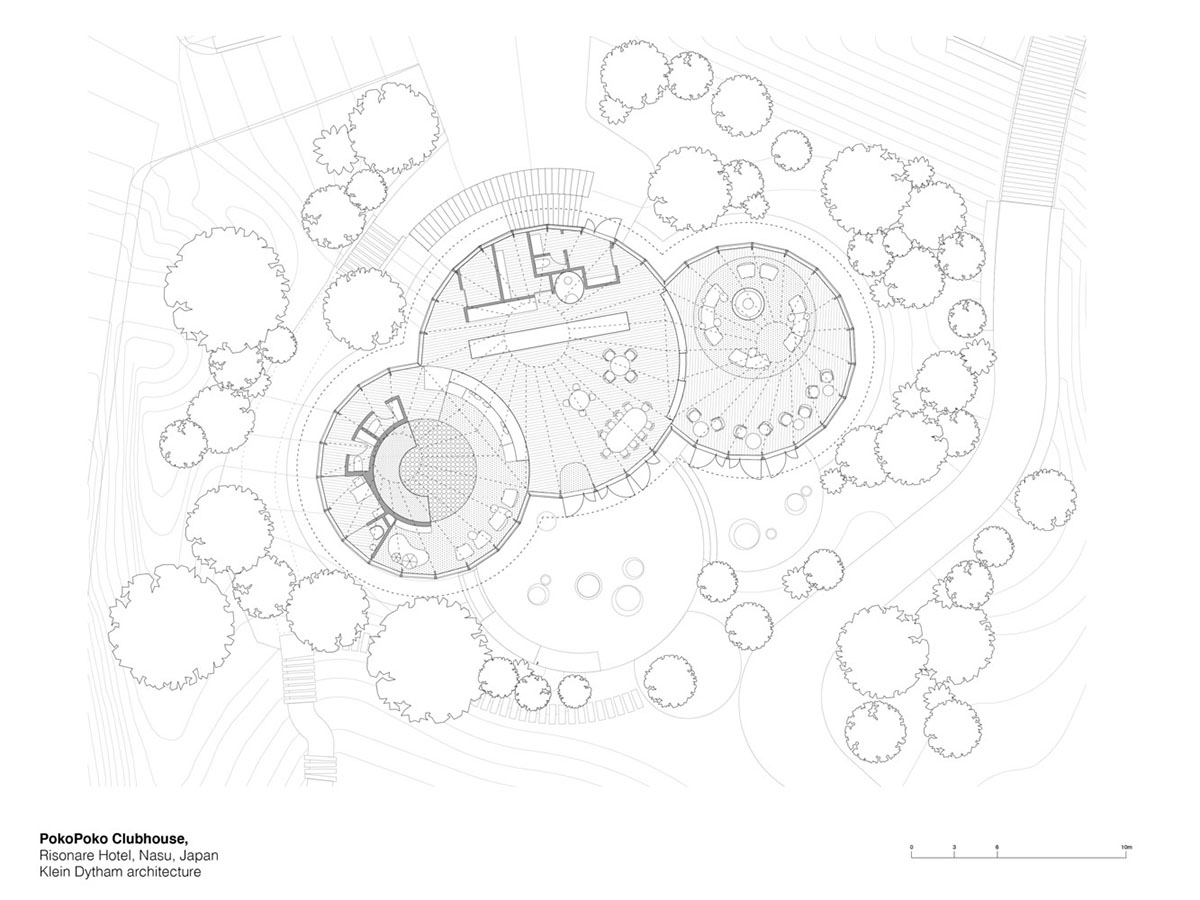 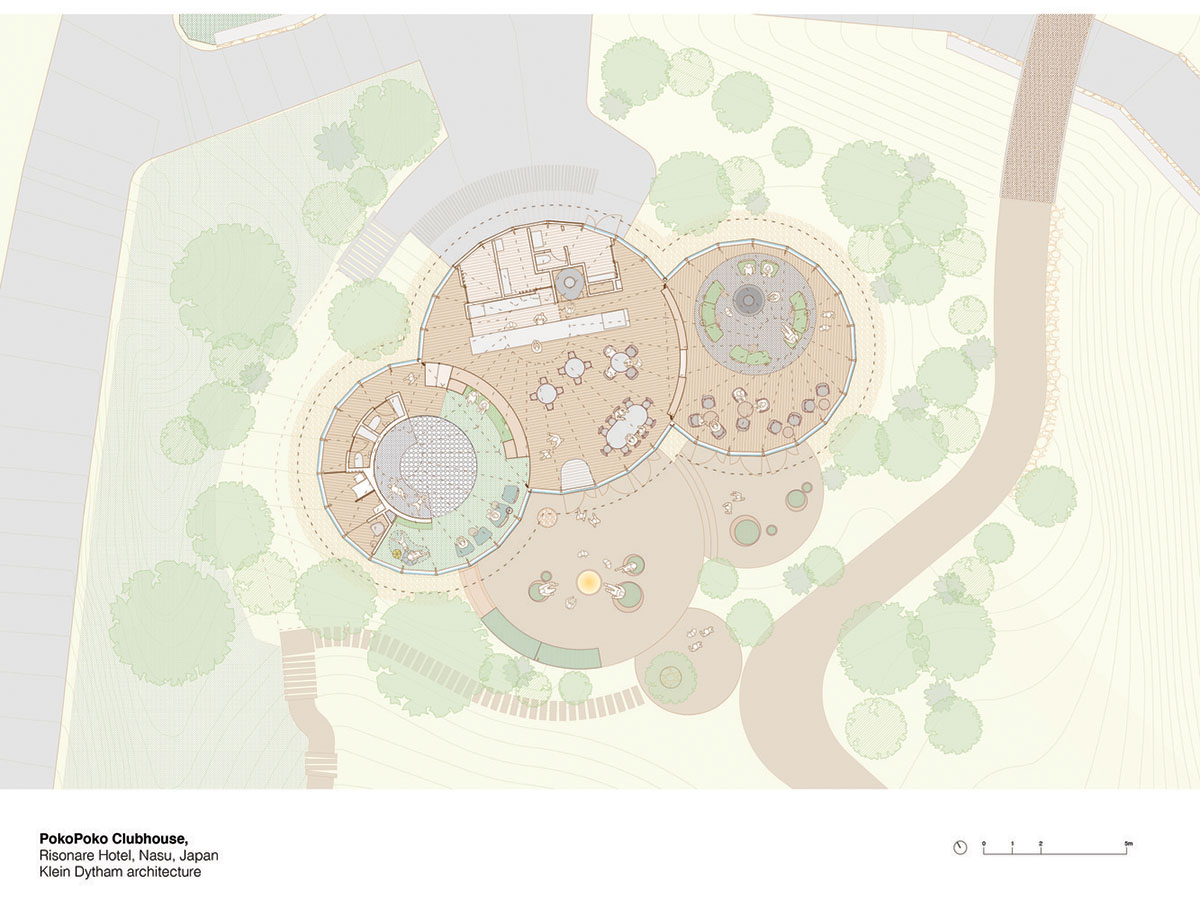 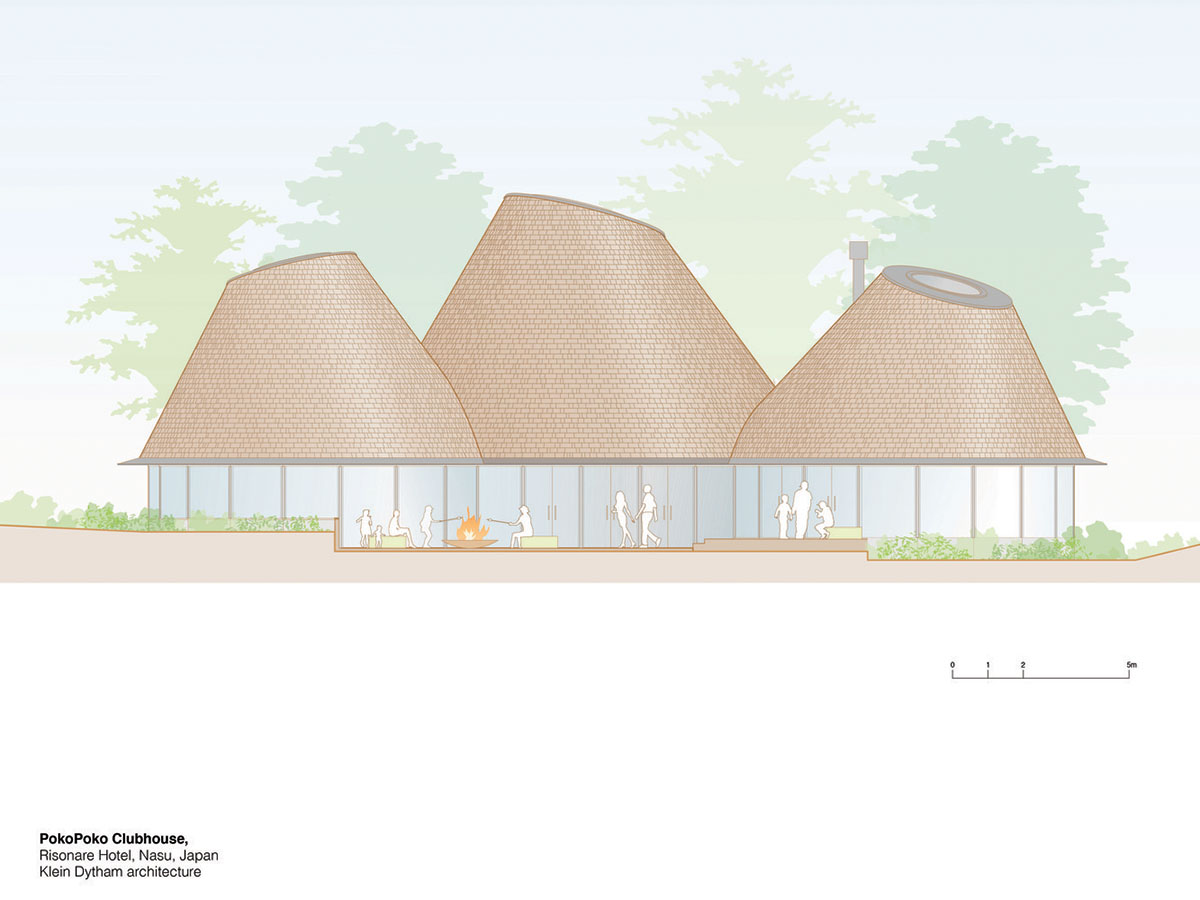 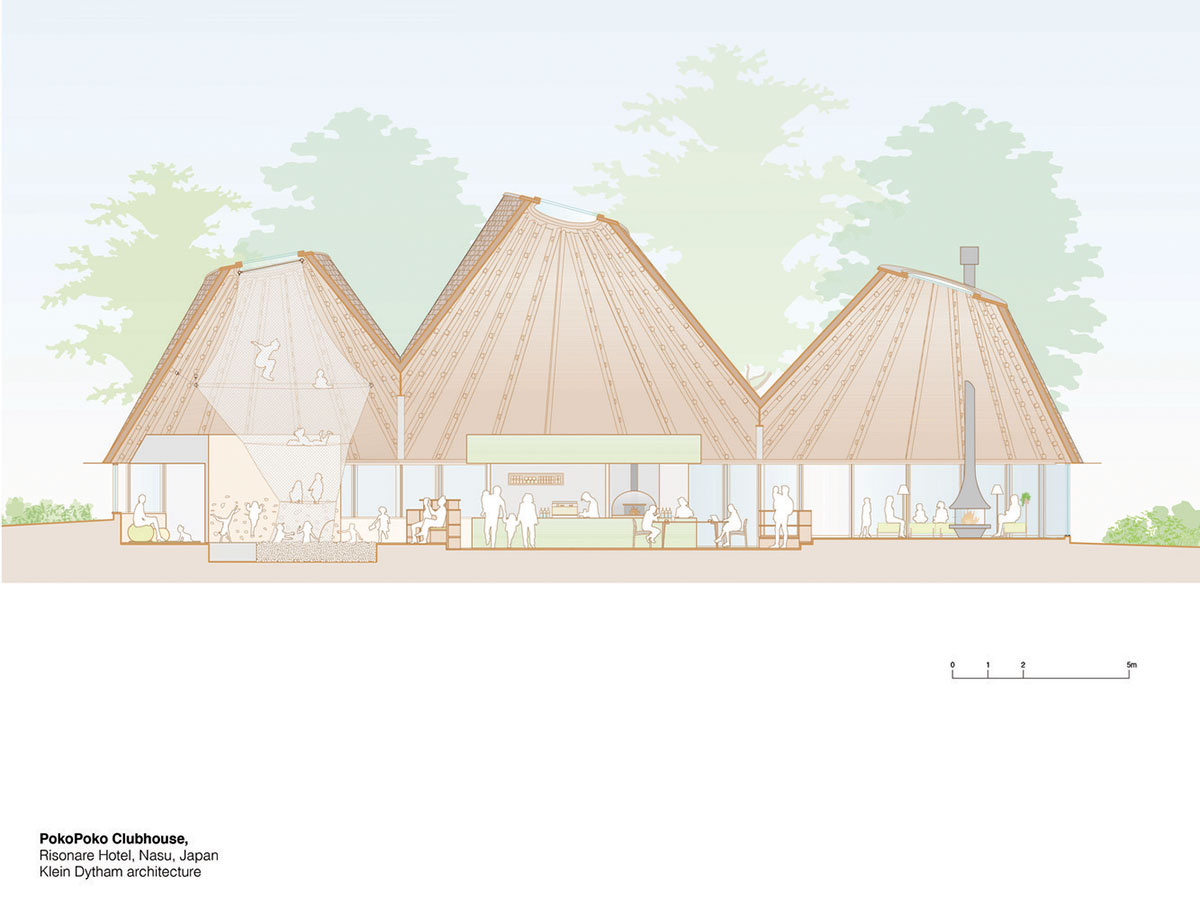