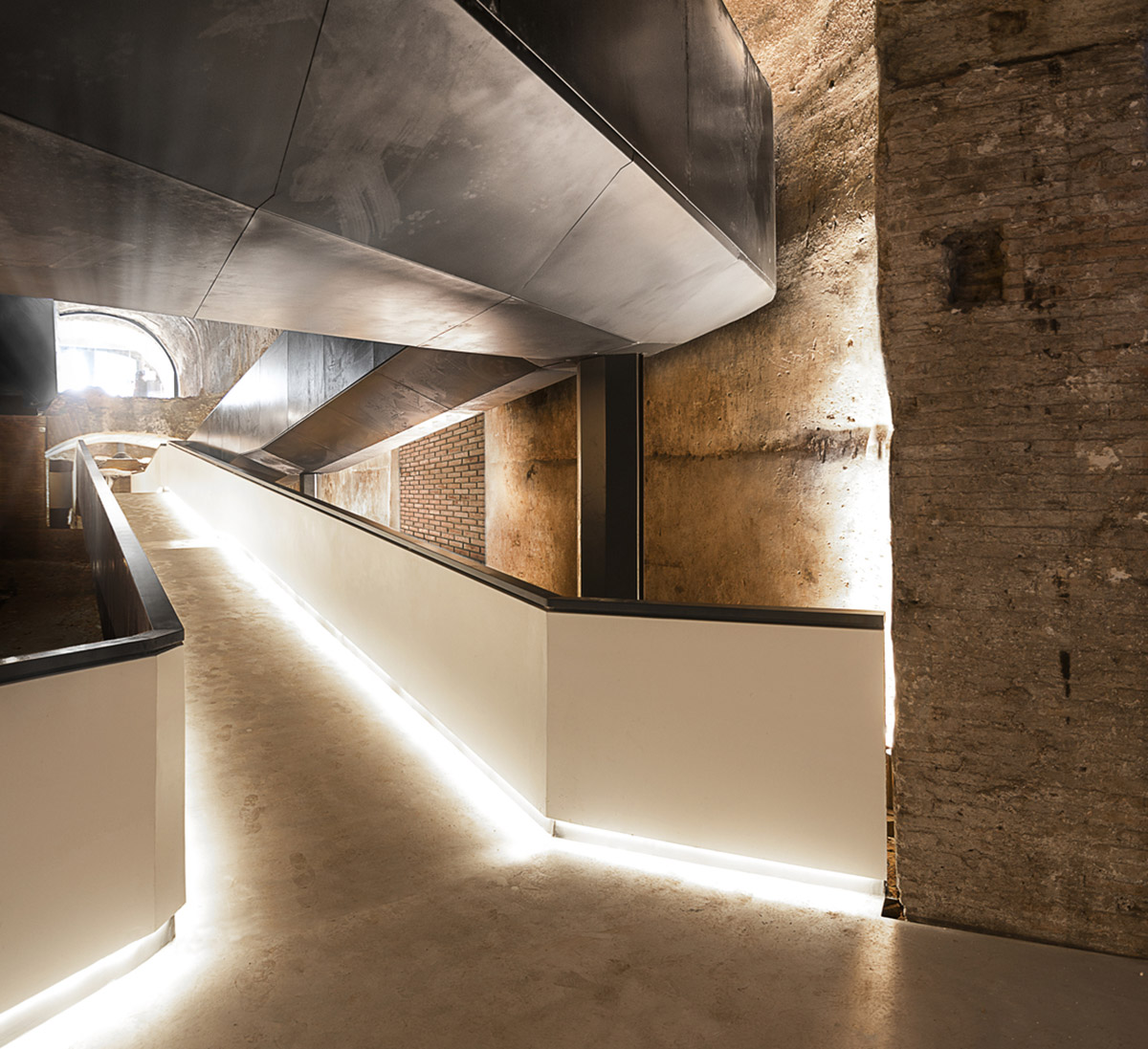 For this intervention, Stefano Boeri Architetti completely used an autonomous and self-supporting system with respect to the existing walls. The new space turns into a game of game of lights according to the team.

After the 2,000-year-old Domus Aurea has been closed during the pandemic, the palace has been reopened with the newly-designed space by the Italian architect Stefano Boeri. The architect improved the space with a new ramp and walkway.

Originally the palace was a home of 1st-century ruler, Emperor Nero, and it has become more prominent structure in the High Renaissance since it housed grottos filled with painted figures. In the initial years of the Sixteenth century Raffaello Sanzio - and before him, at the end of the Fifteenth, Pinturicchio, Filippino Lippi, Signorelli and Sodoma - walked in the company of Giovanni da Udine through the mysterious frescoed galleries of a Domus Aurea not yet brought to light, buried by centuries of damnatio memoriae, land and Trajan buildings.

A maze made up of hundreds of rooms which, on the occasion of the anniversary of the death of the painter and architect from Urbino, host the exhibition curated by Vincenzo Farinella with Stefano Borghini and Alessandro D’Alessio, "Raphael and the Domus Aurea. The invention of the grotesques" inside the Octagonal Room and the five adjacent rooms. 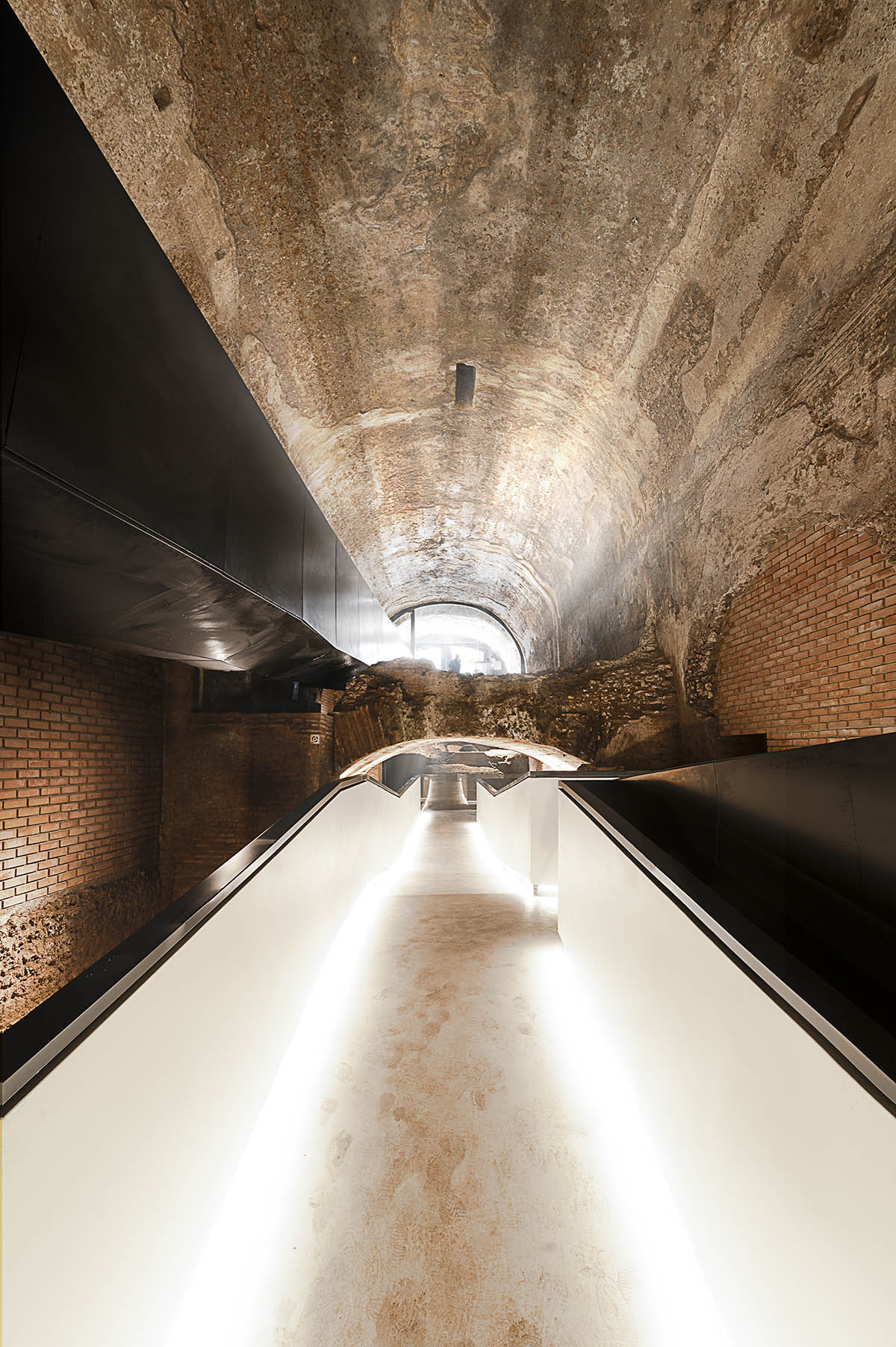 "The project of a new entrance to the Domus Aurea and of a pedestrian walkway to access the Octagonal Room designed by Stefano Boeri Architetti represented an extraordinary opportunity - thanks to the choices of the Colosseum Archaeological Park - to bring back to the attention of the city one of the most evocative realities of history and Roman architecture, allowing each visitor to descend directly into the heart of Nero's Domus," said the architect Stefano Boeri. An extraordinary occasion to discover the stratifications of the history and beauty of the underground environments, being able to admire, during the gradual descent, the Trajan vault above and the presence of thermal structures from other phases.

The respect for the reality in which it fits has prompted Stefano Boeri Architetti to pay particular attention to the construction procedures in such a delicate environment, such as to carry out an artisanal and entirely manual installation, excluding the use of machinery and welding on site that could have compromised the neighbouring wall systems. 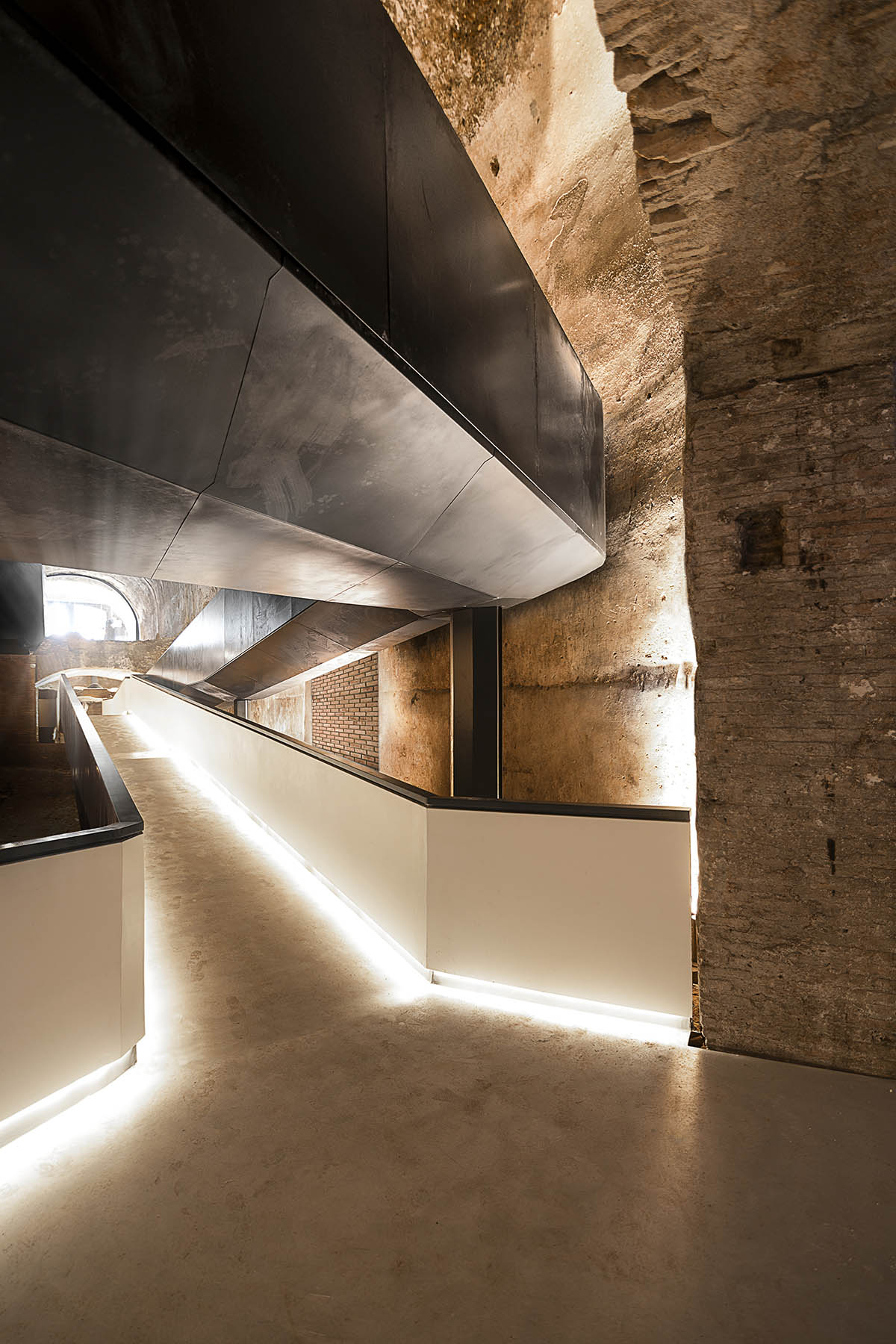 The pedestrian walkway is part of Gallery III - already freed from earth years ago and conceived as a dark but well-defined space - which, illuminated by a light guide that accompanies the visitor, suggests the idea of a light path through the ruins, ideally concluded by the large oculus of the vault of the Octagonal Room, the final destination of the itinerary.

The entrance portal is designed to highlight the location of the access point from the Colle Oppio Park, with a system of openings and closures that incorporate both the mobile windows and the security system, thanks to two large portals in galvanized and painted black steel sheet with brushed bronze details.

The path, after the entrance portal, is divided into three areas - the vestibule, the gallery and the landing in the Octagonal Room - which make it possible to connect the Colle Oppio Park and the ancient floor, almost six meters below. 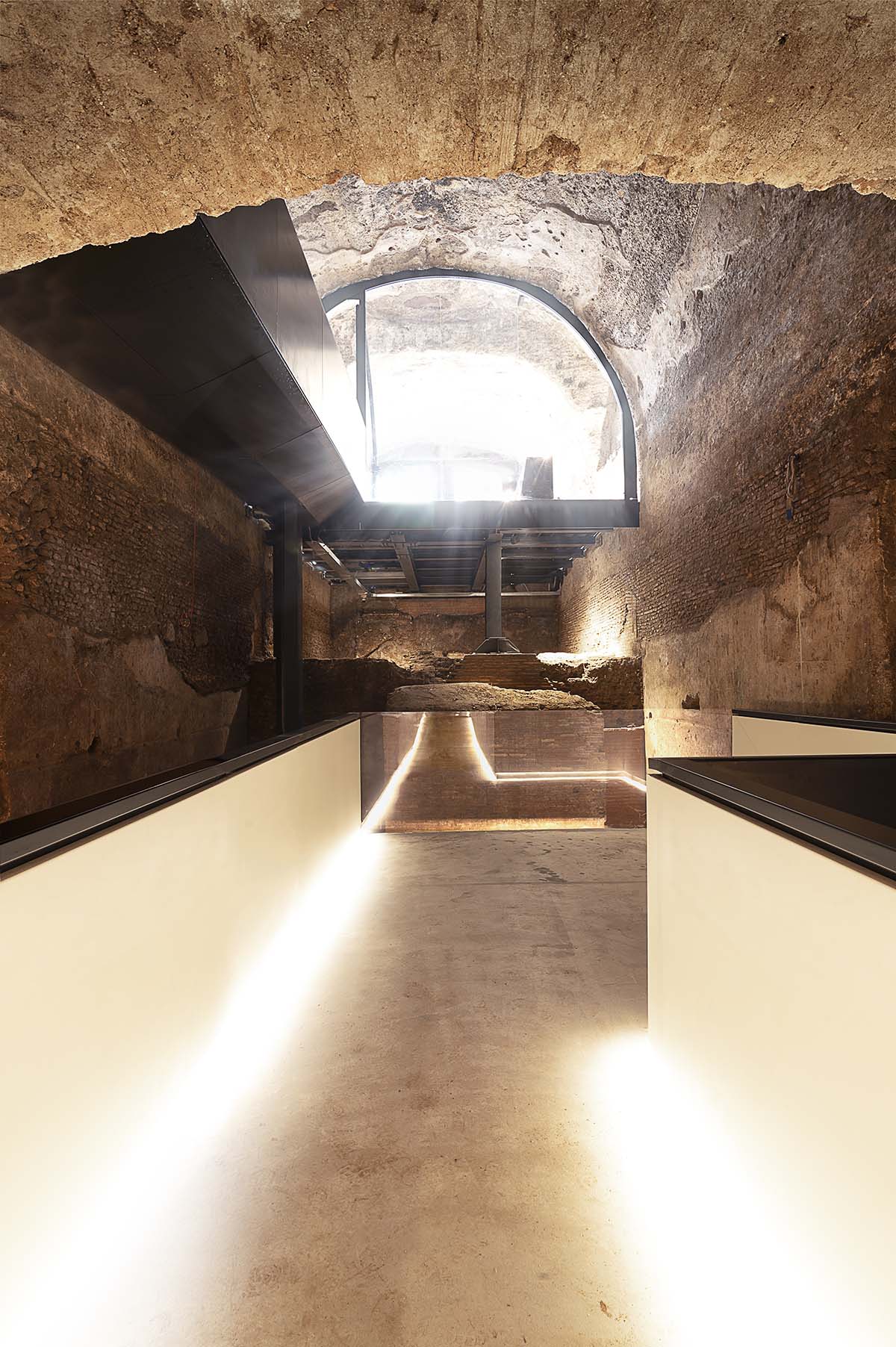 The vestibule houses a space dedicated to the bookshop and ticket office, overlooking a window that allows you to have an overall view of the elongated walkway in the gallery below and illuminated in every detail.

A game of lights allows the entire path to be usable, highlighting construction details, wall textures, remains of an ancient cistern and part of the underlying thermal structures step by step.

The use of LED strips accentuates the linearity of the intervention, making the white resin finishes that cover the walking surfaces and the vertical internal portions of the parapets shine, while - through carefully positioned light points - the underlying historical elements are enhanced. The supporting structure of the walkway - accessible to all types of visitors - is made up of HEB metal profiles covered with a smooth galvanized and painted sheet metal profilewhich, by optical illusion, masks its size and industrial features.

The decision to carry out a light intervention thus gives users an immersive space, a unique opportunity to observe the ruins from above, up close and even to cross them, reaching the final point of access to the Octagonal Room.

The landing of the itinerary in the Octagonal Room, one of the most evocative rooms of the Nero's palace, is finally made up of a removable vertical neutral element that can, from time to time, take part in the different scenarios that occur within the Domus Aurea.

From a frame for the projection of images and videos to a tale of the palace, the wall - of the same size as the portal behind - changes its appearance as the use of lights of different shades, intensities and colors changes, thus becoming part of the space that welcomes it. 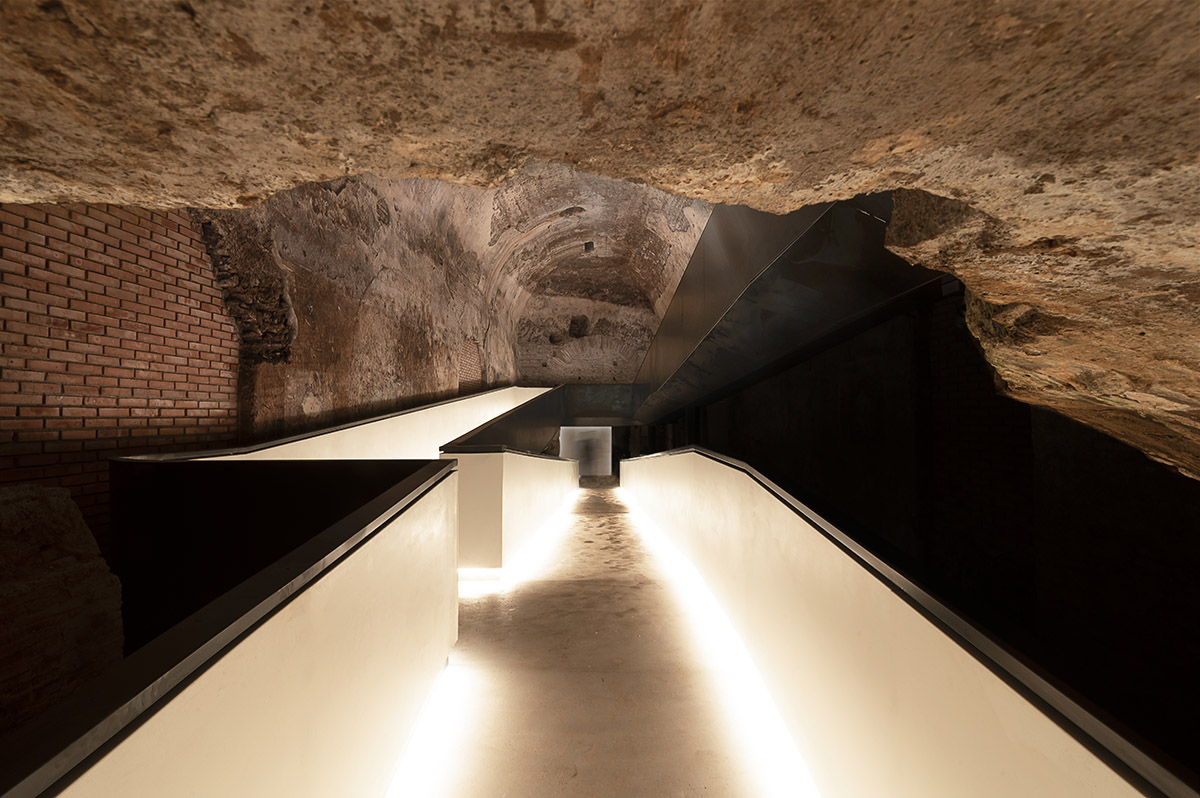 From a technical point of view, the vertical panel located in the Octagonal Room has the function of masking the system of the lifting platform and the final part of the walkway. In total respect with the environment in which it is immersed, the element maintains the same dimensions as the portals of which the room is made up and, like the rest of the project, is studied in detail in such a way as to be composed on site without the use of welding or other machinery that could in some way alter the internal microenvironment of the Domus Aurea.

Combining different technical and formal solutions and declined on the peculiarity of the different spaces in which it is inserted, the project aims to offer the city of Rome and all visitors permanent, new and easily accessible access to one of the most extraordinary archaeological treasures of the Country.