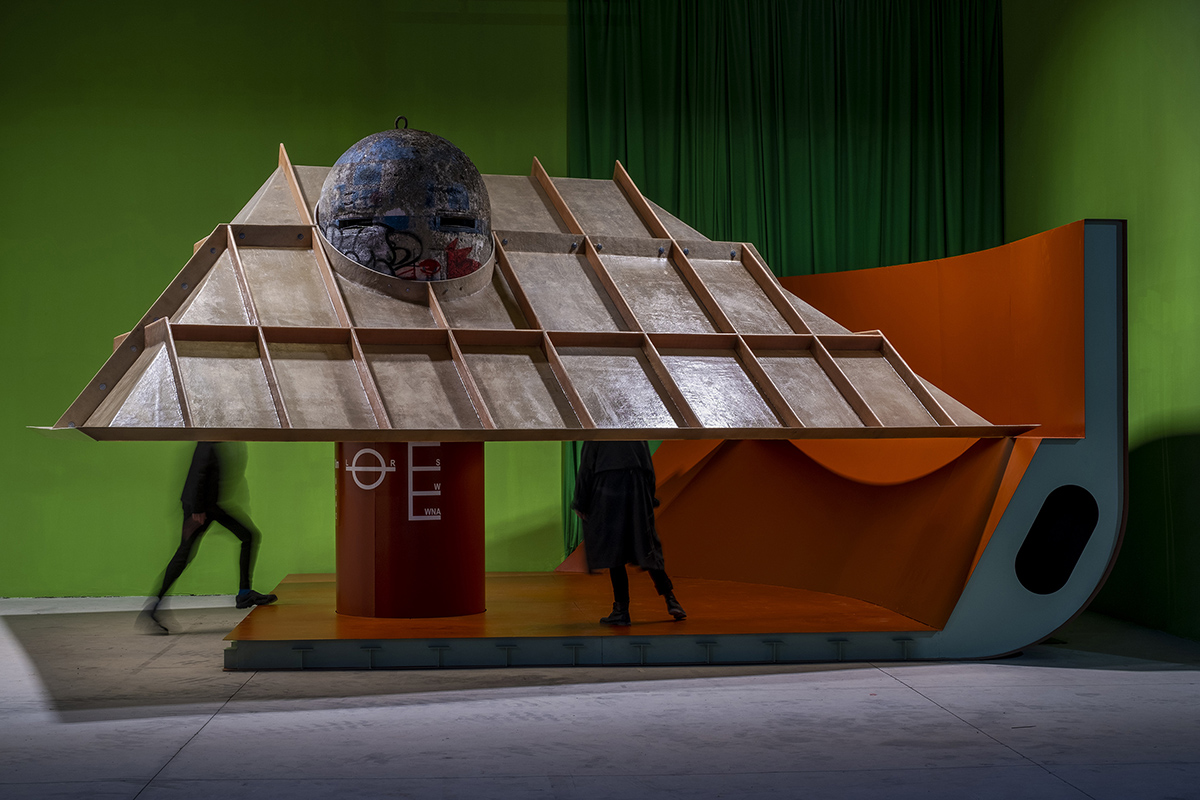 The Croatian Pavilion has installed a playful structure that can create unexpected relations for each visitor at this year's Venice Architecture Biennale which opens to the public on May 22 in Venice, Italy.

Titled Togetherness / Togetherless, the pavilion, curated by Idis Turato, is a spatial composition that explores the ways in which basic, fundamental elements of architecture can be used to create a temporary community.

Located in Asenale venue, the title of the pavilion "Togetherness / Togetherless" refers to the individual’s need for closeness and being together, and the simultaneous, paradoxical inability to ever fully achieve it. 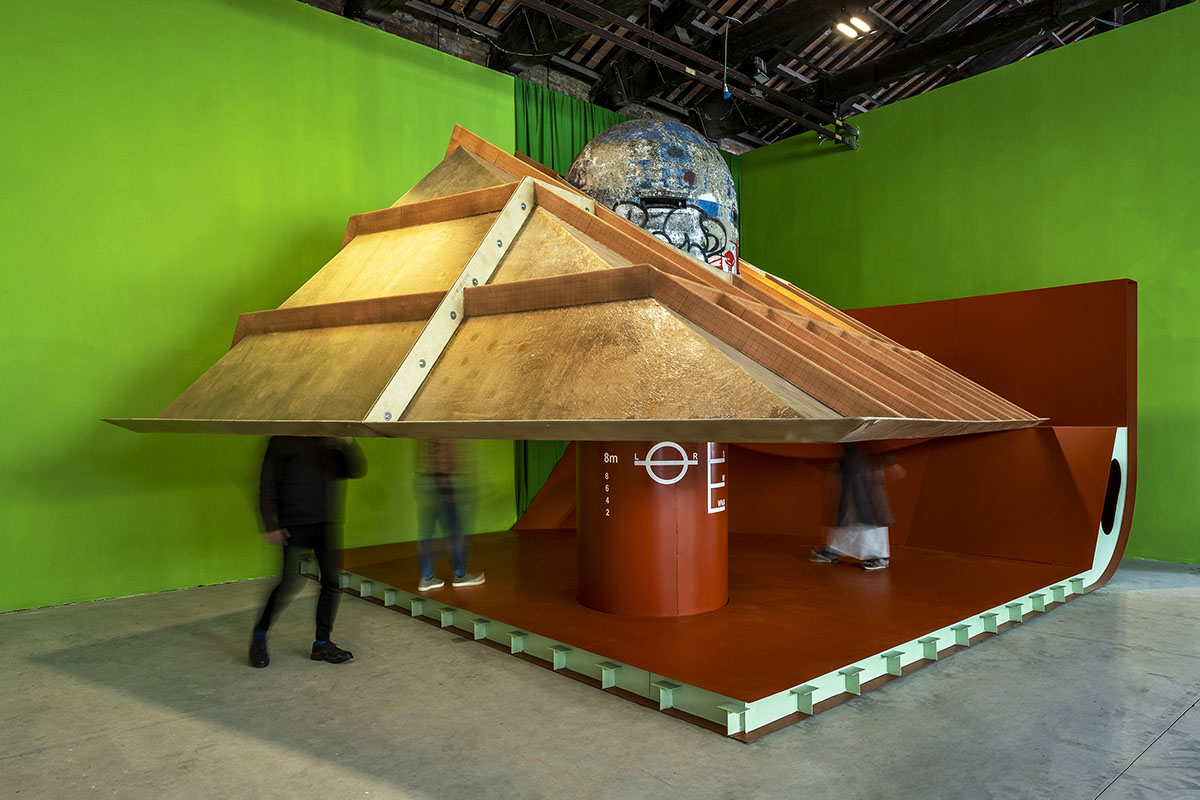 The design of structure is inspired by the layers of history, context, and the Croatian City of Rijeka and its experience as the European Capital of Culture in 2020, when it served as an arena for spatial and artistic research and experimentation.

The design of the pavilion is derived from three rudimentary, universal and timeless elements of architecture: the base, the column, and the roof. They are materialised as an assemblage of elements using resources from Rijeka’s history, industrial past and mass production. 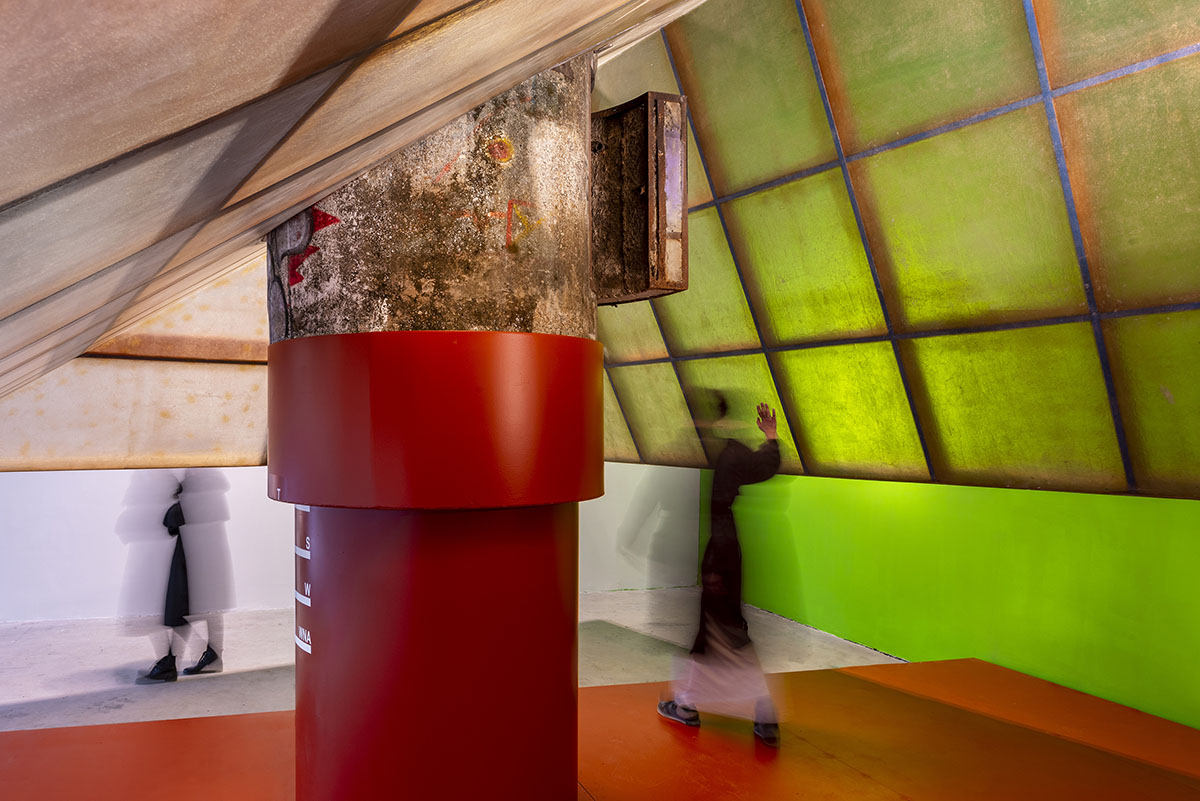 "The city is regarded as a laboratory and archive of ready-made elements, some of which are then selected and displaced into an entirely novel context, thus given completely new meanings," stated the Croatian Pavilion.

"The building elements of the pavilion, isolated from their original context and tailored for a new purpose, temporarily adopt new functions and multiple possible identities, resulting in unexpected relations among each other, but also in relation to the visitor." 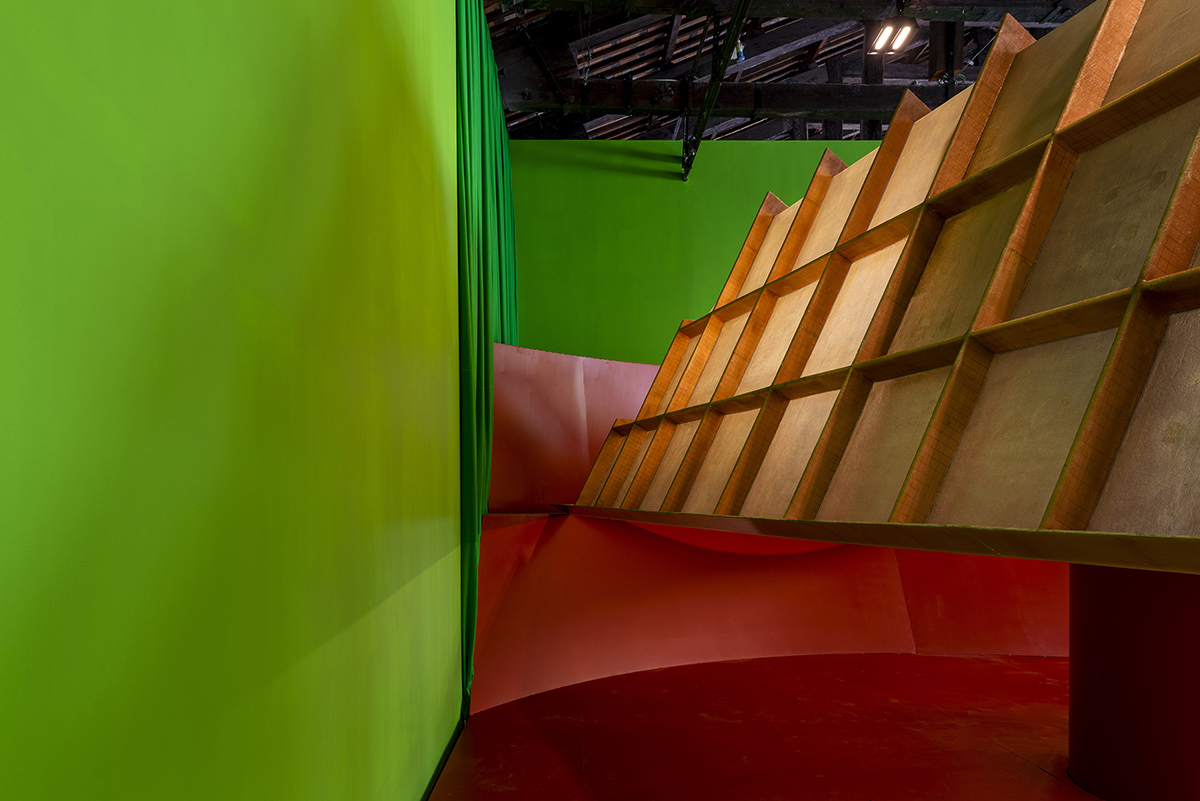 With new and different spatial meanings reinscribed into them, they acquire a new spatial role, and developing authentic architecture.

The repurposing of elements from the city and their recontextualization through inscription of new meaning emphasizes the position of the authorial team of the myriad possibilities of resetting any given city whose built landscape contains decaying structures, abandoned spaces, areas, and zones – elements that need to be regarded and examined from a fresh perspective in order for them to have any future use or utility. Such an approach to design, based on dislocation and redefinition, solidifies the method chosen in creating a new architectural order. 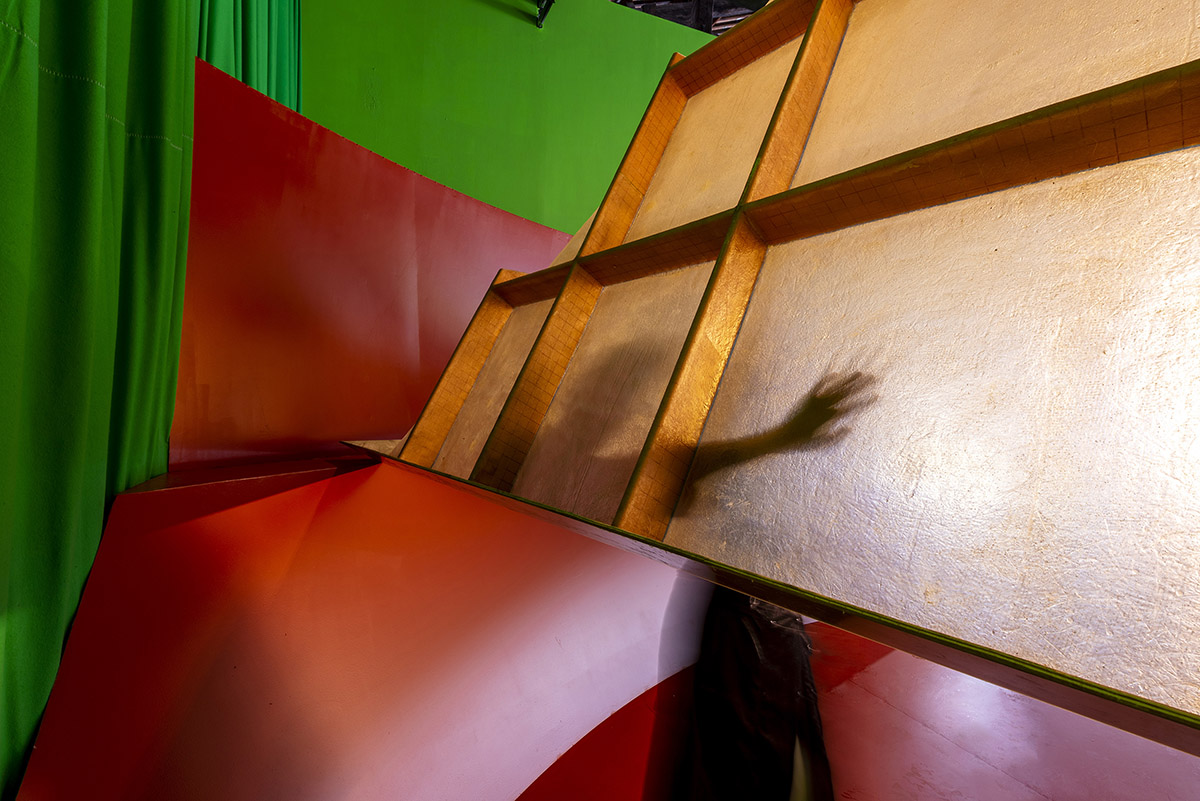 Thus, a concrete guard booth in the form of a hundred-year-old bunker serves as a load-bearing column and “a room for one”. It is a module for an individual, a sort of minimal spatial unit, giving the one visitor the feeling of complete isolation. It is the element that structurally connects the base and the roof, breaching the structure of the latter and towering over it. 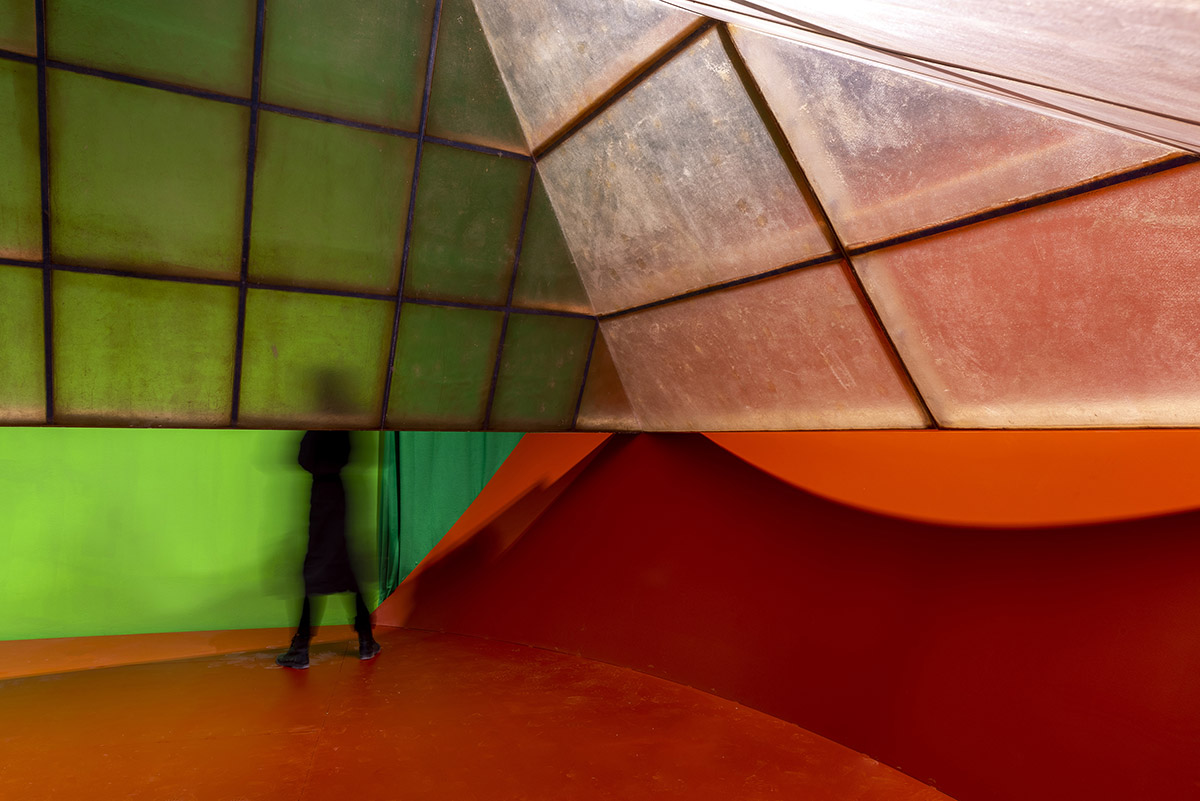 Glass reinforced polyester structure crafted in a specialised maritime-vessel-workshop serves as a hip roof element - the cornerstone of the pavilion. It is set at a height that forces visitors to bend down in order to get under it and experience the interior of the pavilion - a room for many.

The roof’s low position also obviates the possibility of direct visual contact between people moving along the Arsenal corridor and those under the pavilion roof, producing new relations and collective spatial tensions between passers-by and visitors under the roof, making conspicuous the consciousness of non-belonging or temporary belonging of some, and exclusion of others. 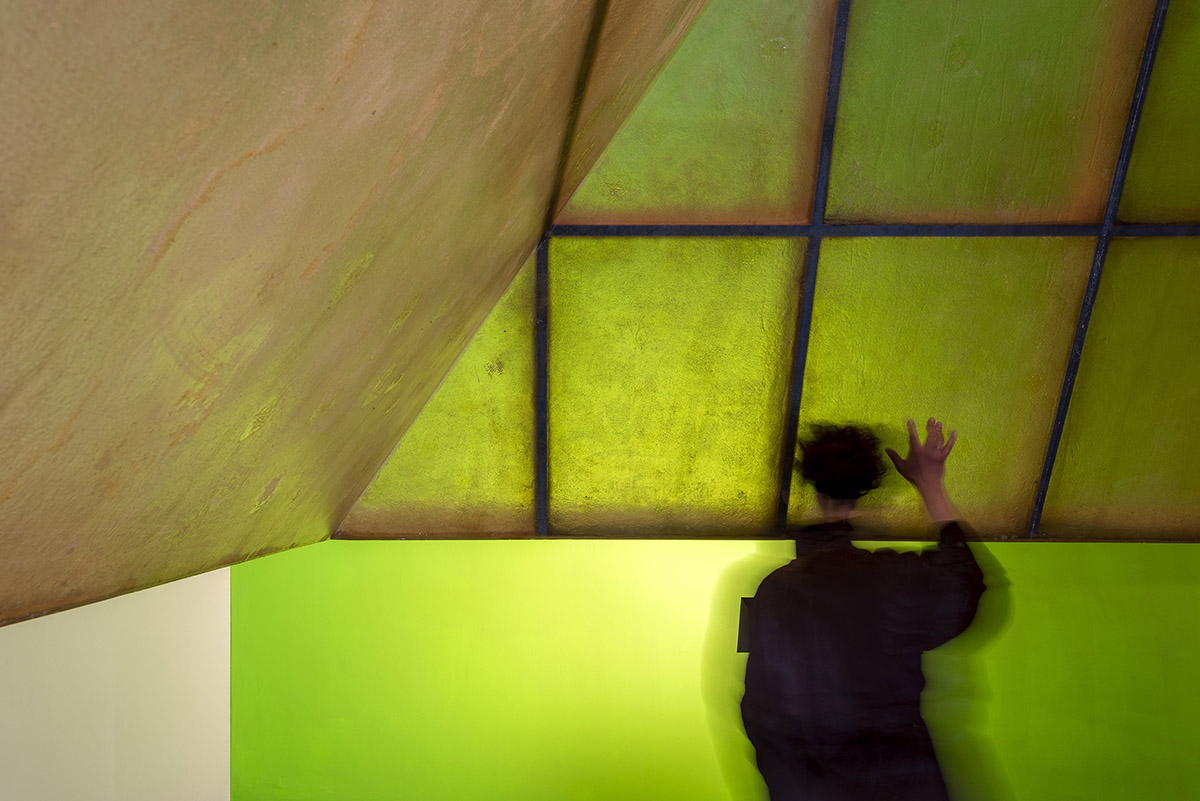 Lastly, various shipyard cutouts  - originally part of a ship’s hull, forms the structure of the base of the pavilion, a common ground. This ground element is positioned as a step up from the Arsenale area, defining the territory of our community. In addition it serves as structural function of counterbalance to all the other elements, which are connected to it. 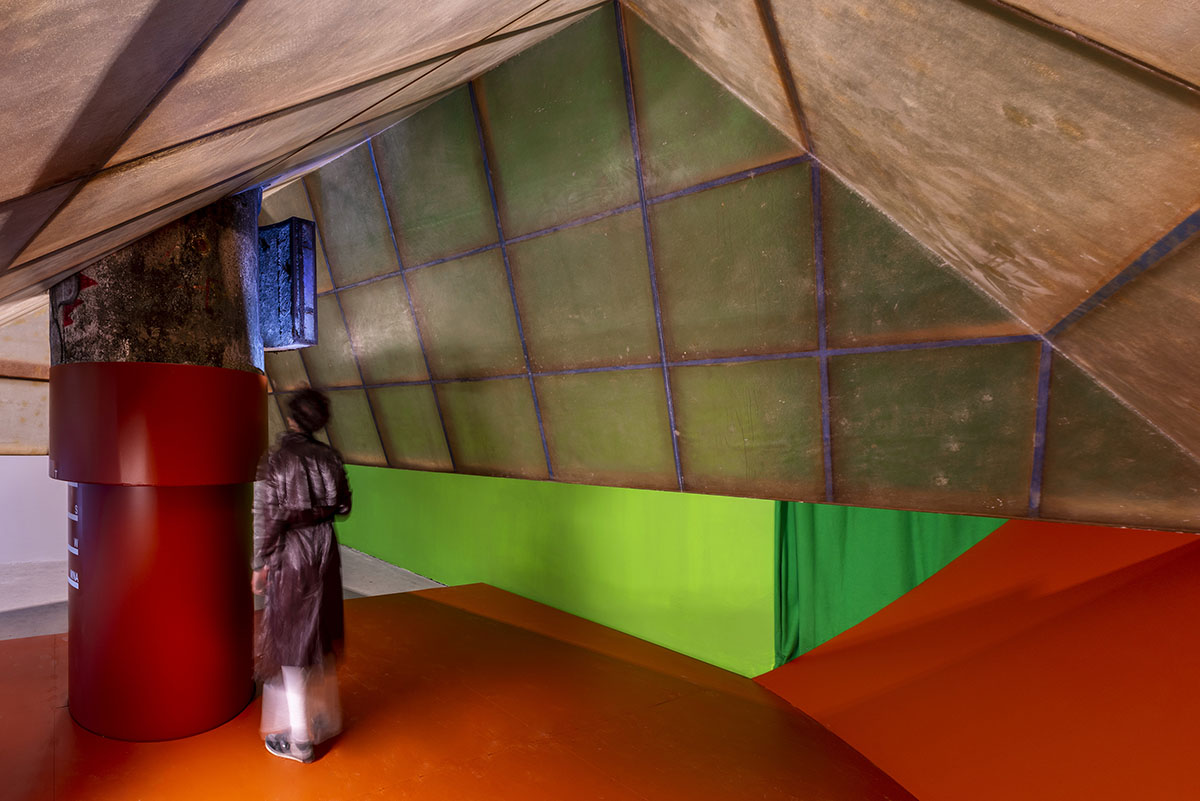 Through the set-up and spatial characteristics three elements comprising the pavilion enable and trigger various inter-relations, tensions, proximities and/or interactions to come into play between the individual and the group: visitors entering, or lingering around, the pavilion.

The experience sought when visiting the pavilion is corporeal mobility: peeking, bending, approaching, climbing, distancing – resulting in repetitive actions, which in being performed become spatialised definitions of acceptance of being and non-being together. 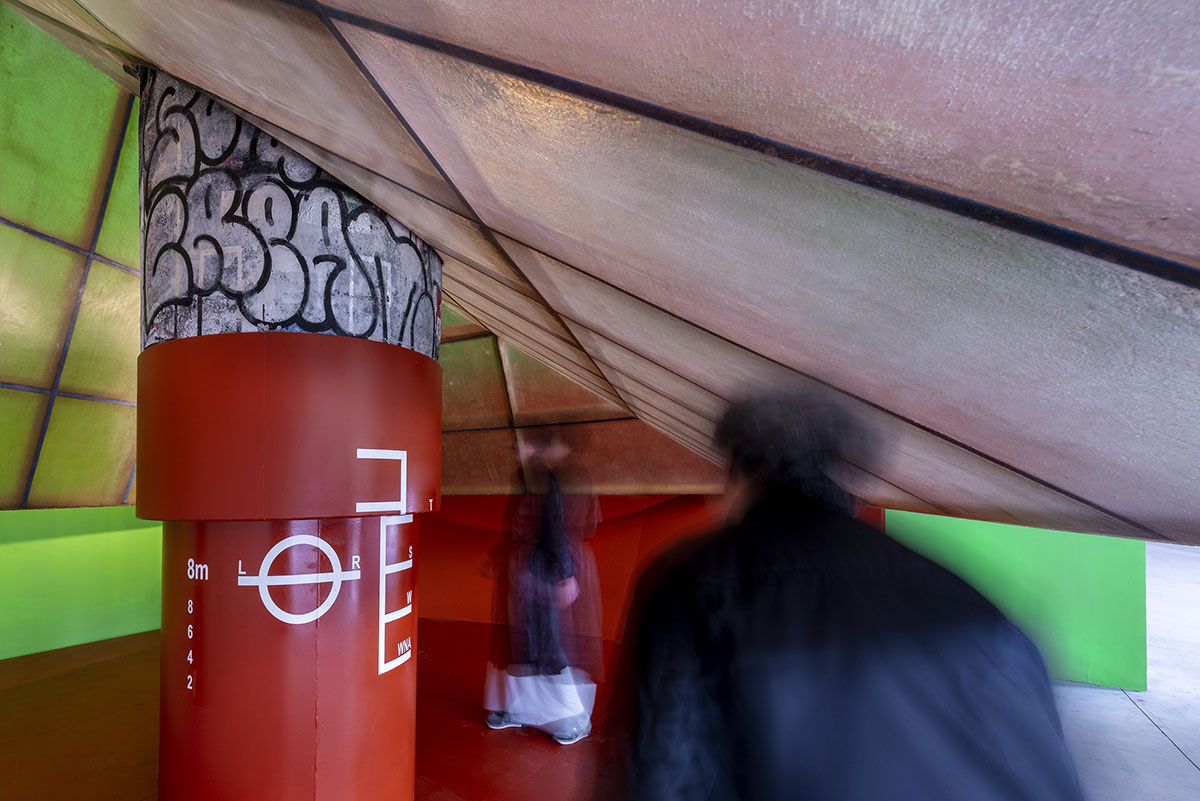 The fourth element of the pavilion is a green-screen look-alike wall and curtain that surrounds the structure of the pavilion. It instantly suggests an atmosphere of a film set, defining the pavilion as a performance stage on which images and relations are produced and manipulated.

The elements of the pavilion put together in their new context and surrounded by the green screen are placed onto the Arsenal corridor, hinting that the Biennale visitors find themselves more on a floodlit movie set amidst green wall surroundings, filming CGI scenes of communal life. In this theatrical context the whole spatial field of the pavilion becomes an accidental podium for the visitors to adopt temporary roles of members of an ad-hoc community formed and enabled by architectural elements. 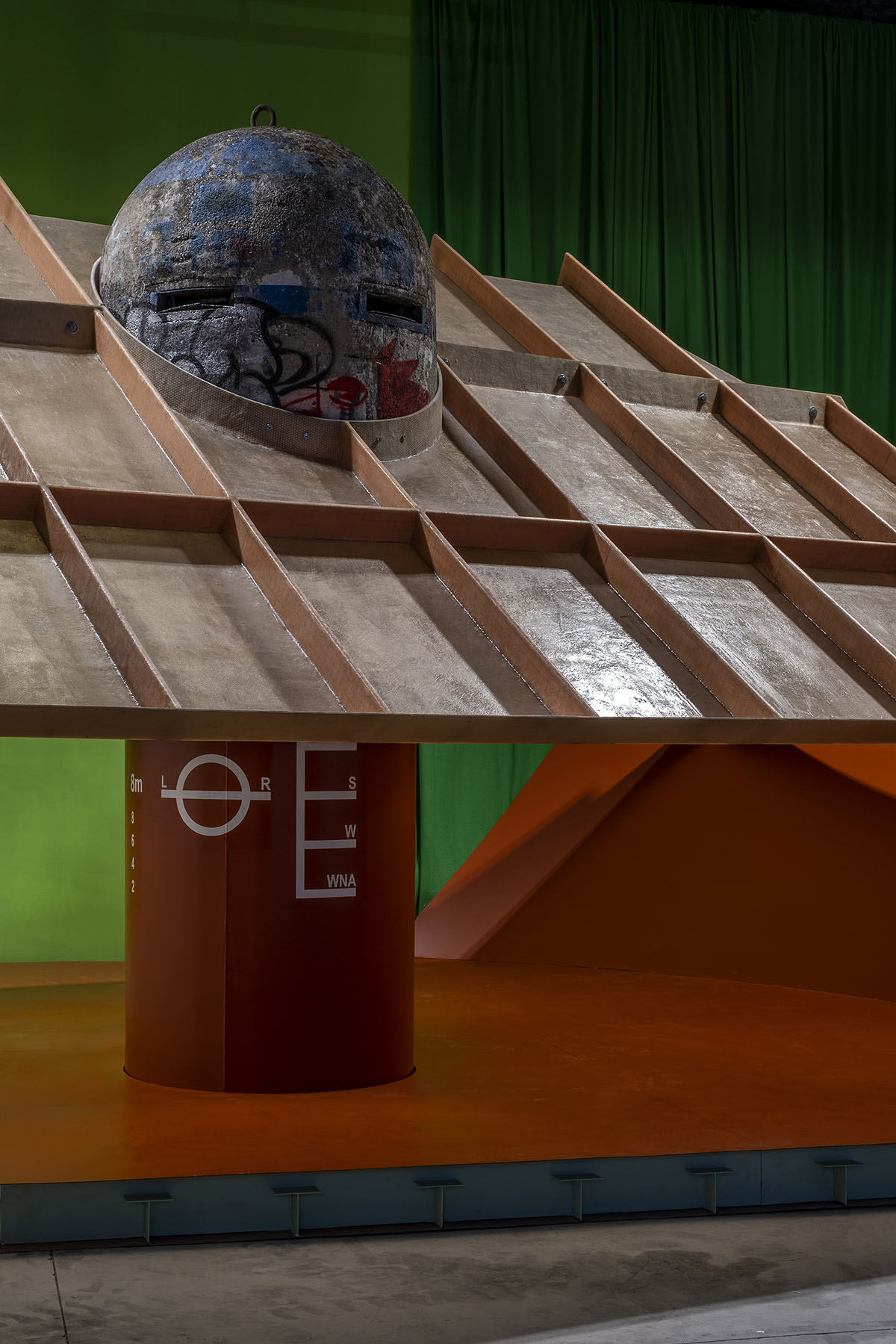 Such a presentation and disposition of the pavilion unconsciously draws the visitor into complicity with the experiment of creating a new, organically generated community model.

The individual is free to enter below the roof and share common ground or enter the bunker and distance or reposition themselves in relation to the other members of the community, i.e., other visitors. The artefact of the pavilion becomes a platform for mediatisation, communication, and inscription of diverse experiences. 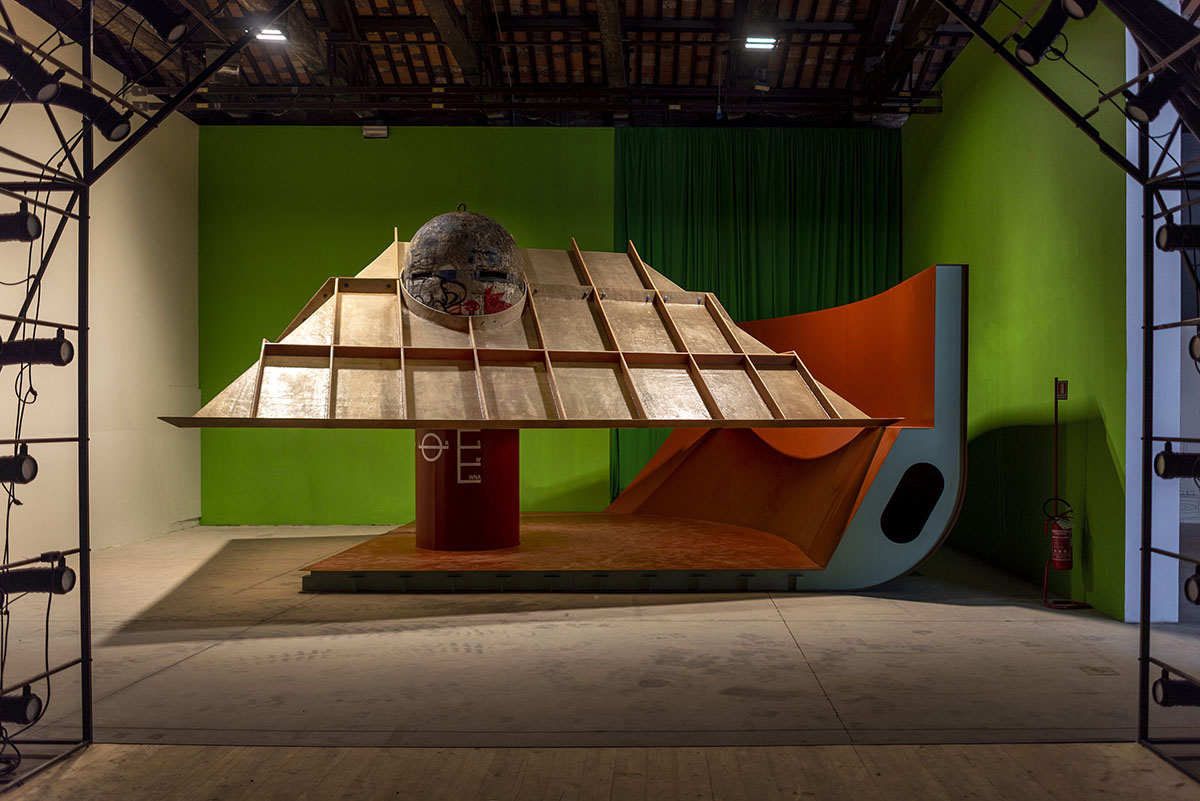 Visitors can also engage a digital footprint of the project which is presented under a new section, titled PLAYGROUND, at the Pavilion's official website.

Through PLAYGROUND, visitors can assemble and create their own collages and architectural artefacts made out of cut-outs from elements found in Rijeka. Visitor of the website are asked to create their own pavilions and assemblages and share them on their social media channels. 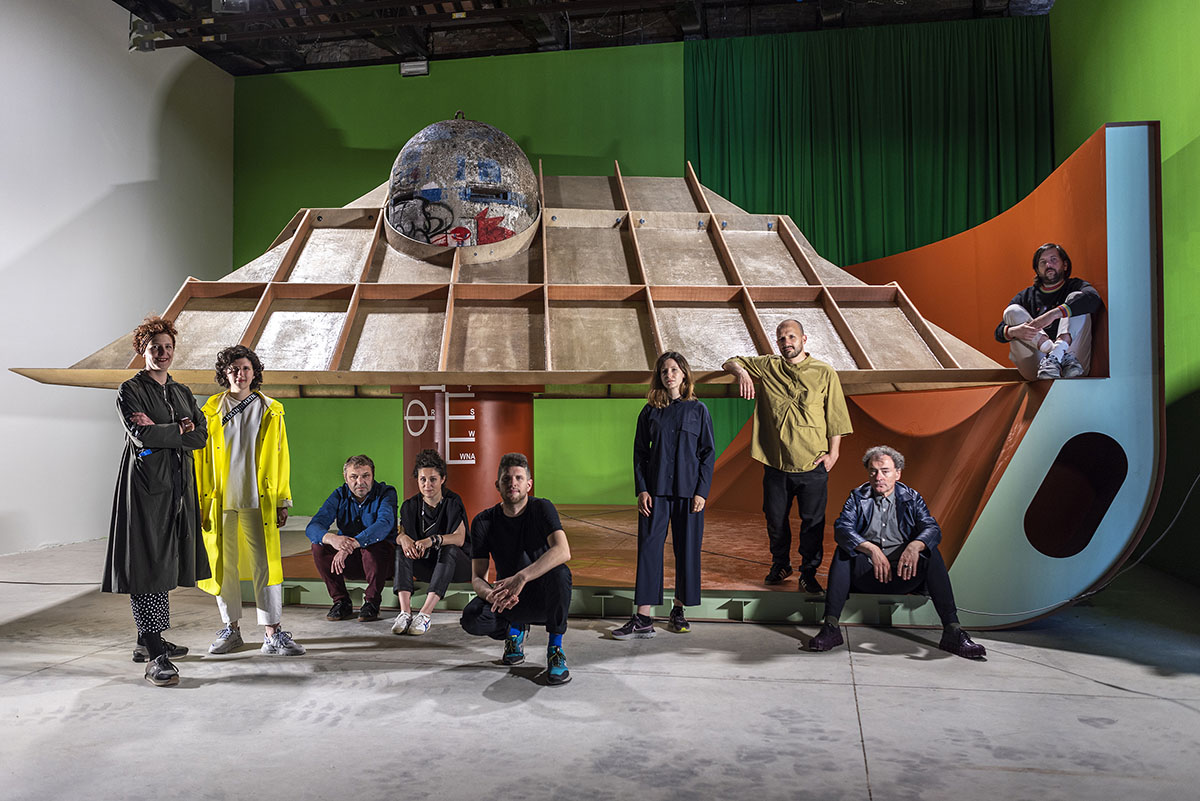 Process on working on the Togetherness / Togetherness project has particularly benefited from the contribution of specialised local artisans, craftsmen, and experts in the ship-building industry: their manual labour, experience, and know-how affirms the local context of the pavilion. 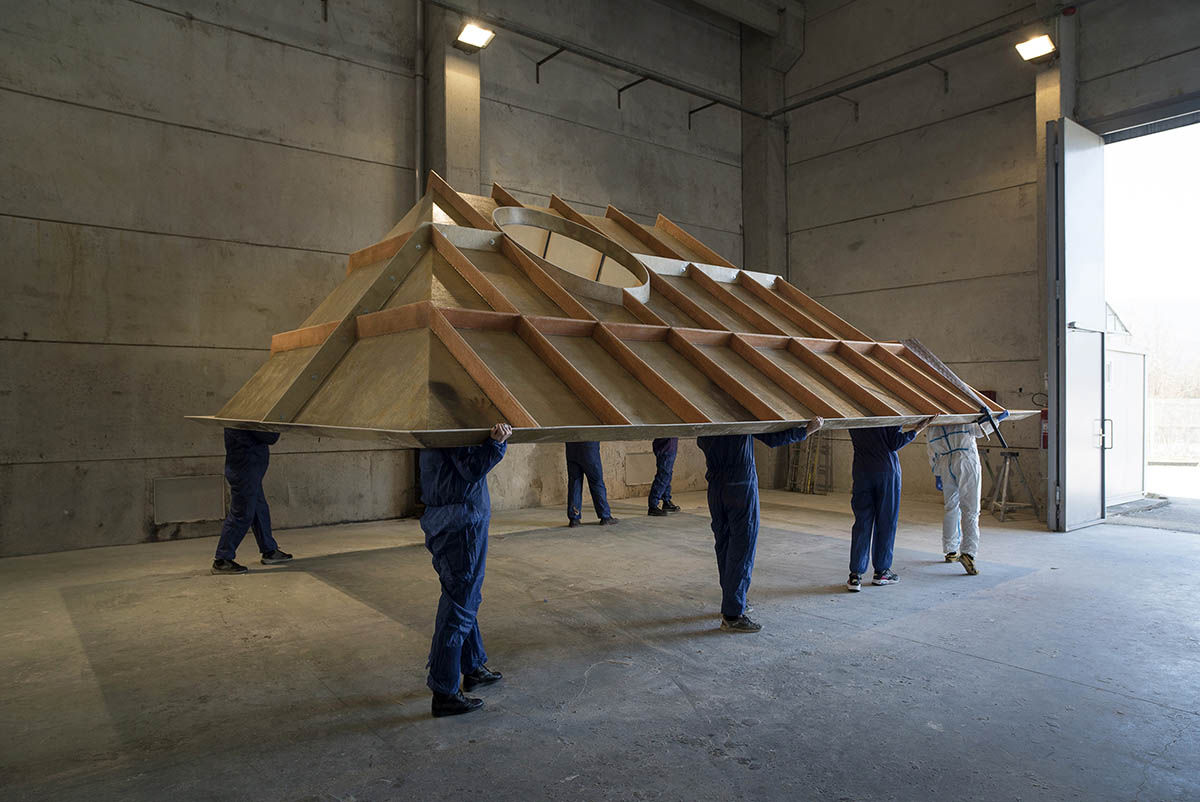 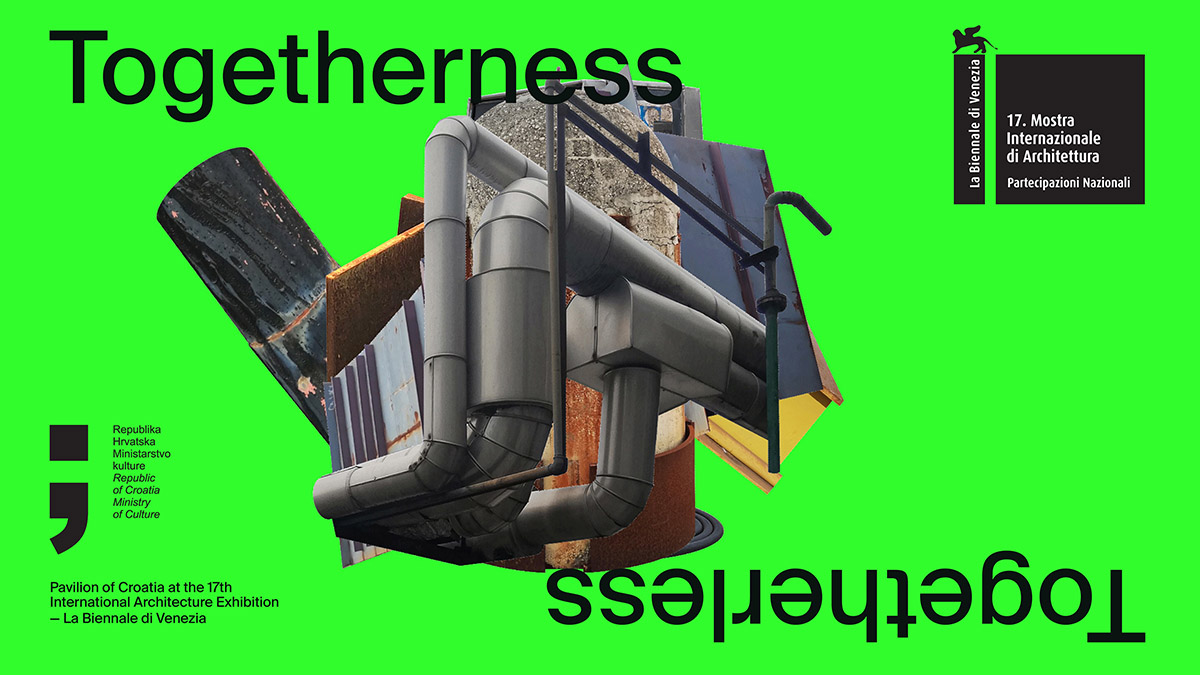 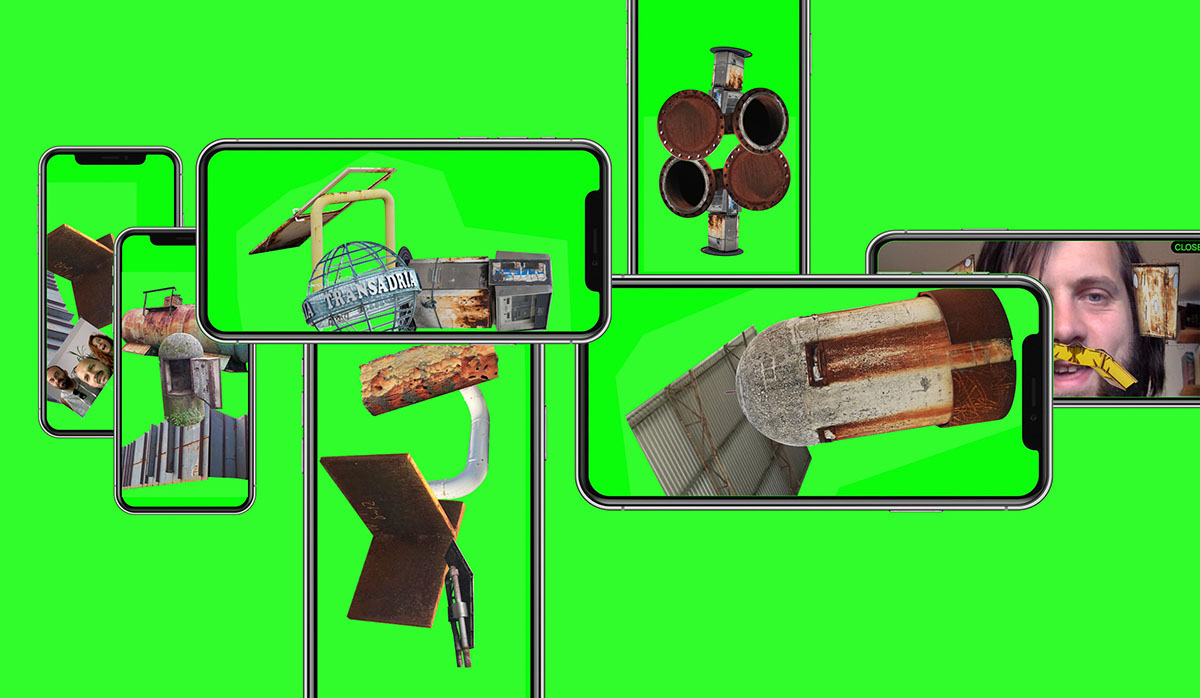 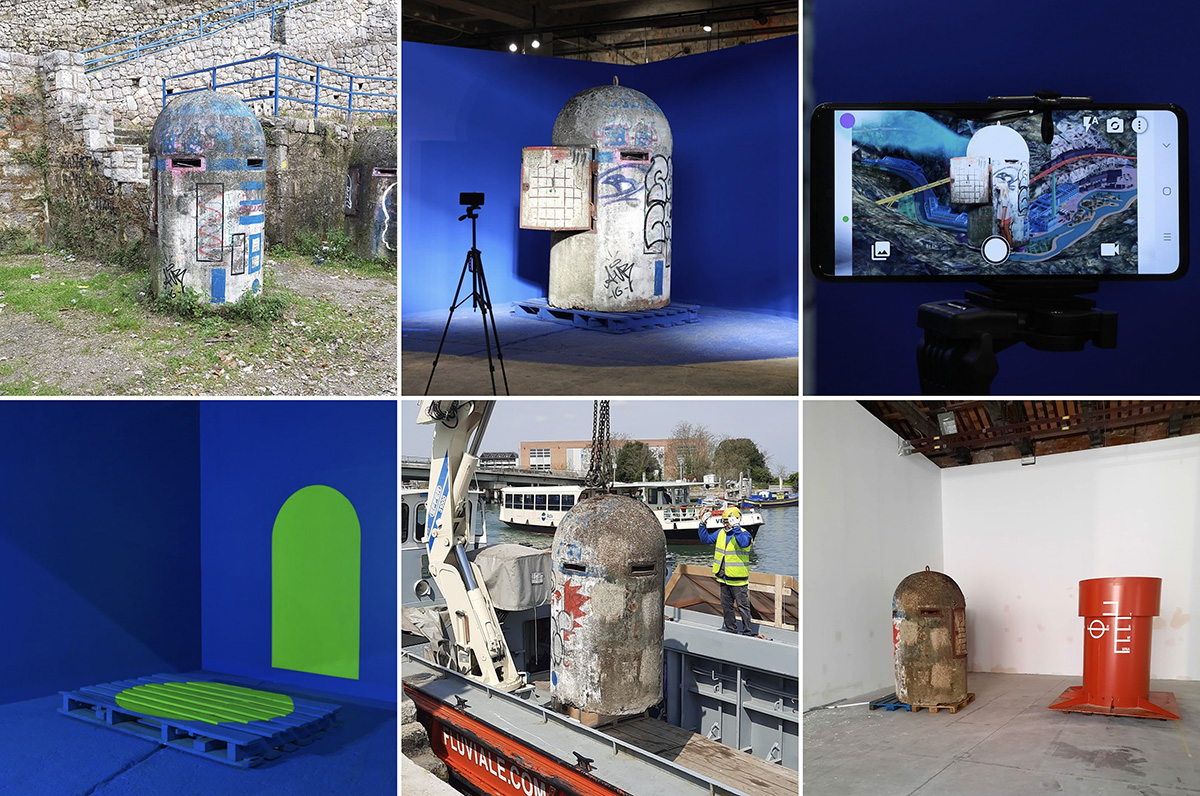 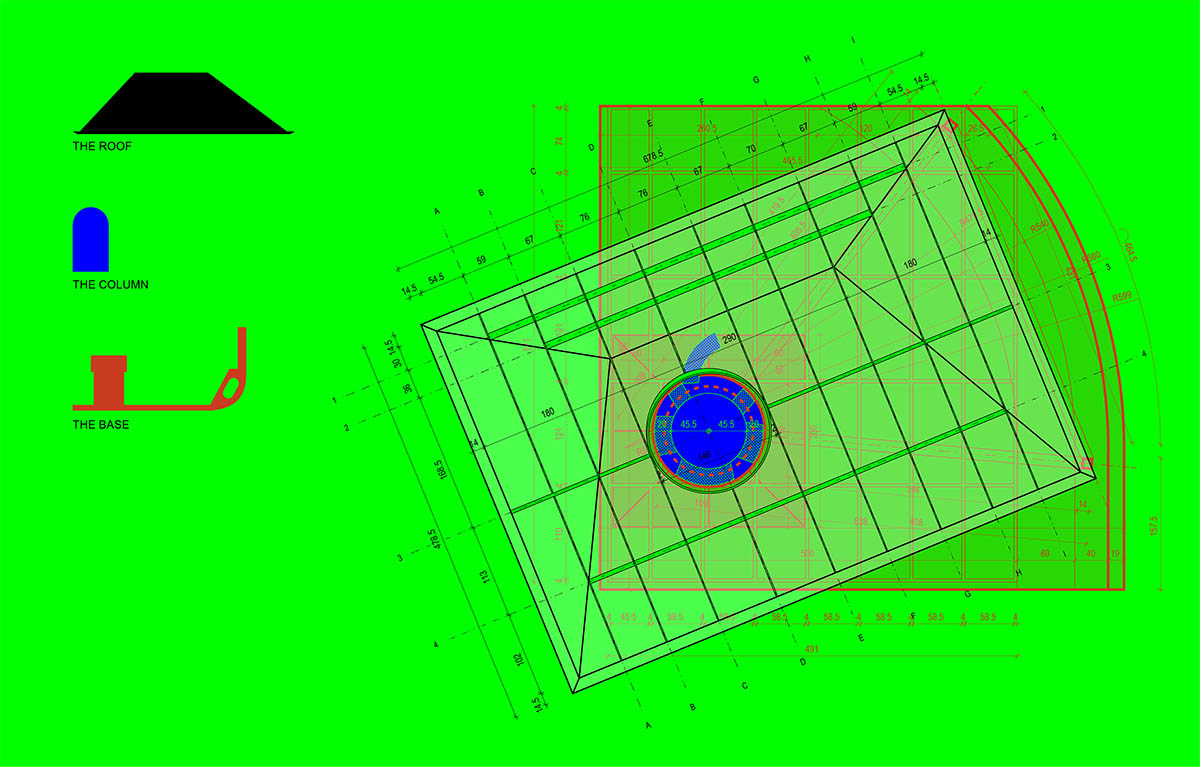 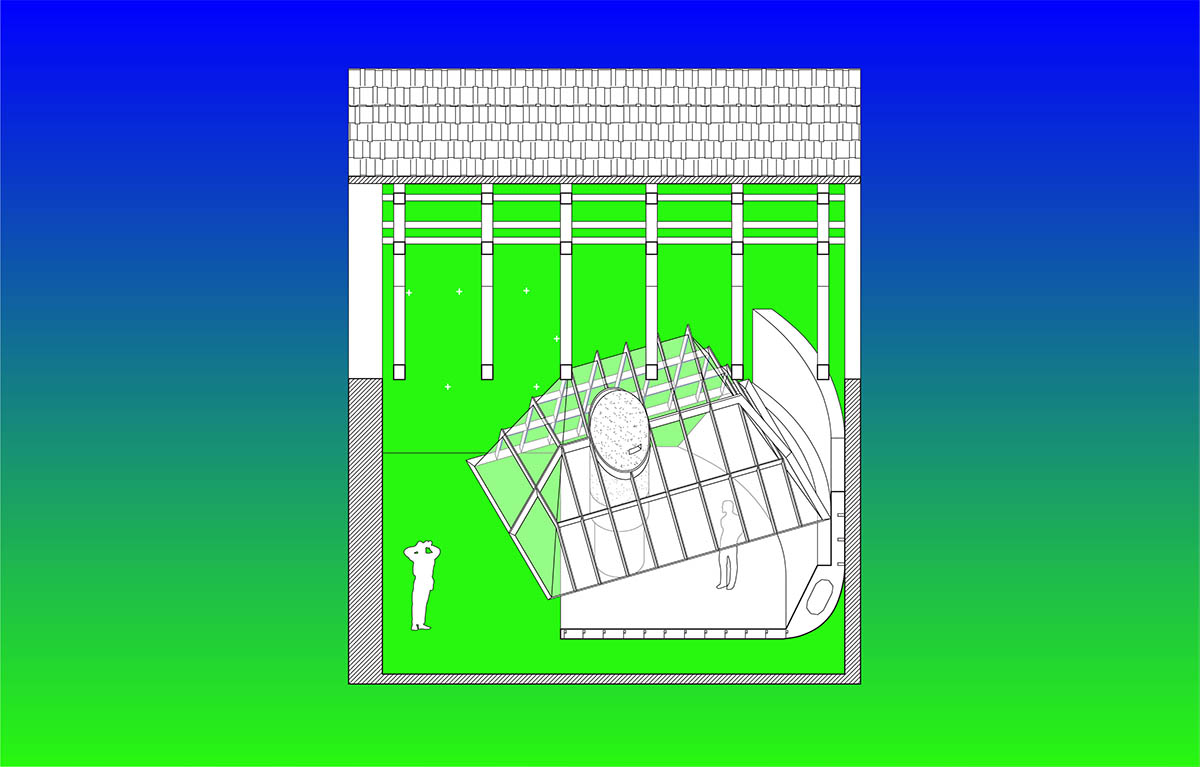 Commissioner: Ministry of Culture and Media of the Republic of Croatia

Project Coordination: Nevena Tudor Perković (Ministry of Culture and Media of the Republic of Croatia)