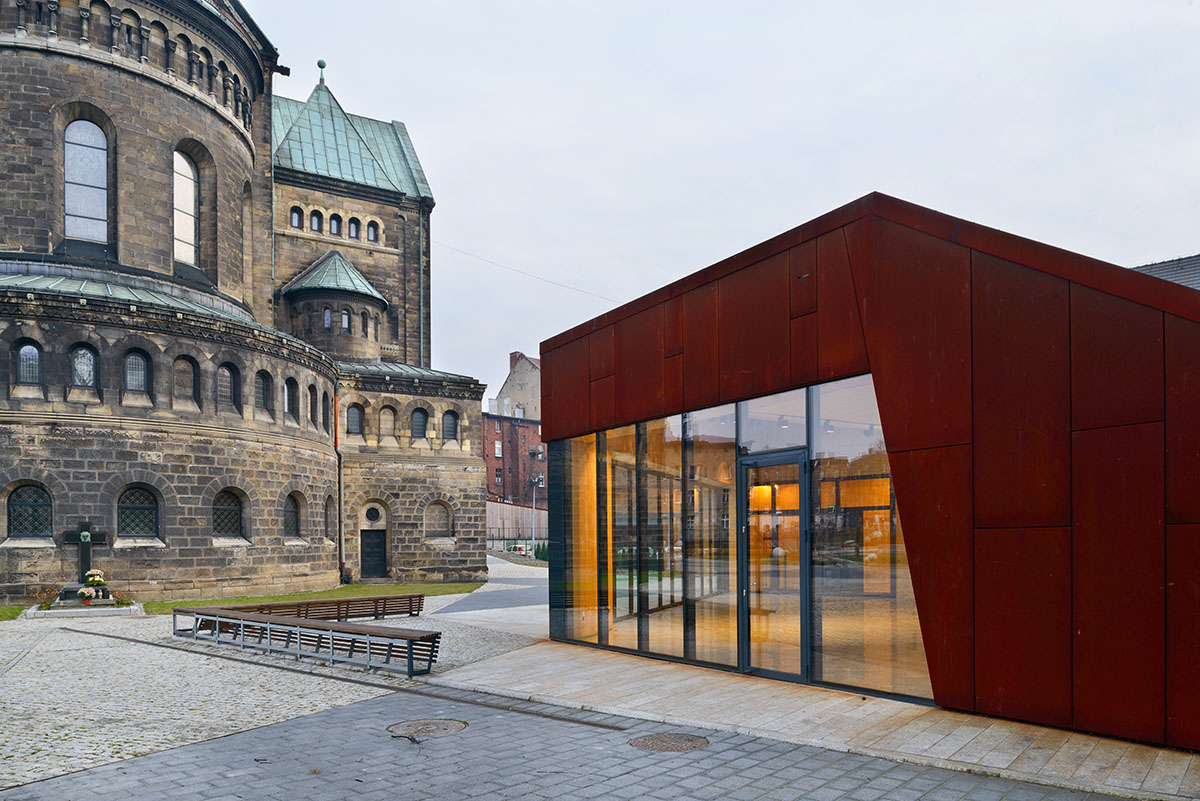 Polish architecture firm Medusa Group has completed a corten-clad culture and education centre and the rosary garden next to the Church of St. Hyacinth in Bytom, Poland.

It's a new public space to serve local communities, around what used to be the economically and socially degraded centre of the Rozbark district.

At the initiative of the local Roman-Catholic parish under the invocation of St. Hyacinth, dedicated space has been developed to serve local communities, around what used to be the economically and socially degraded centre of the Rozbark district in Bytom. 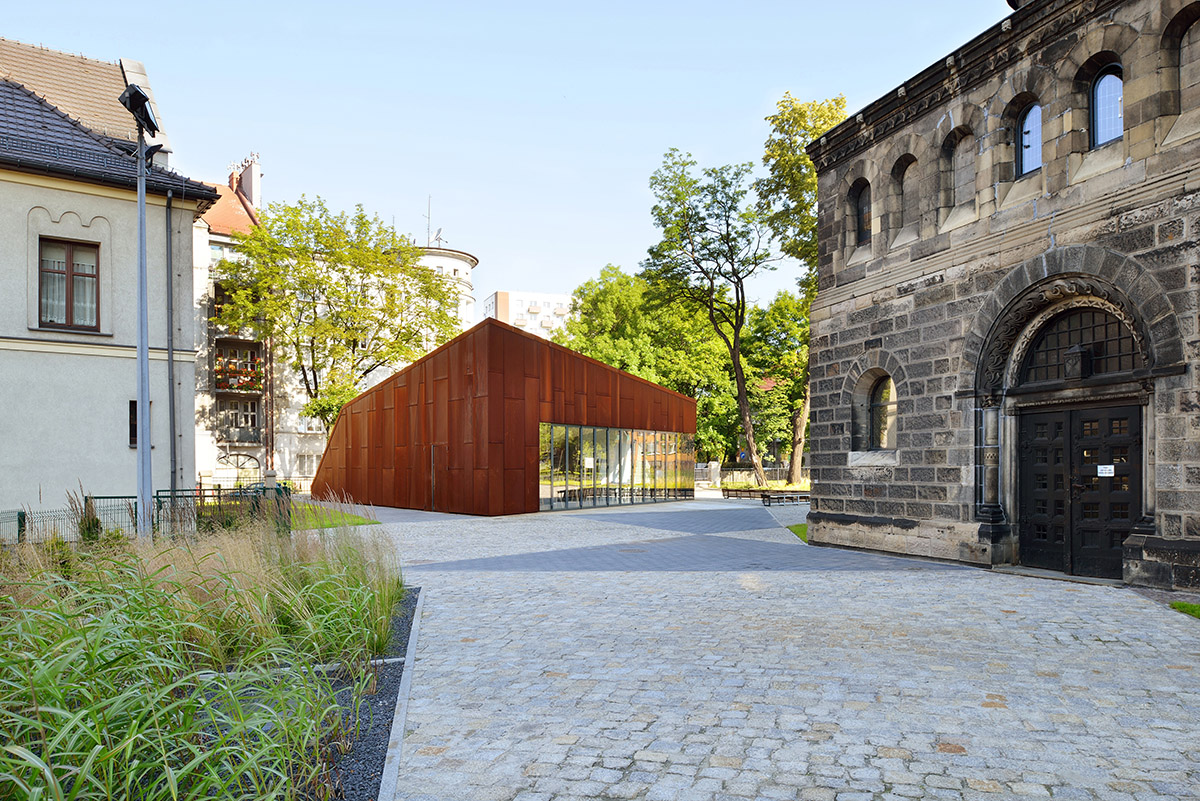 This facility adjacent to the church has been developed to maintain the functional and aesthetic consistency with the area of the original square, which has been transformed into a rosary garden, with references to the legend of St. Hyacinth.

The area, with its religious character, constitutes a composition which creates a background to the monumental building of the church itself. In addition to the garden, the key elements of the entire project are two pavilions which relate to the culture-and-education activities conducted by the parish. 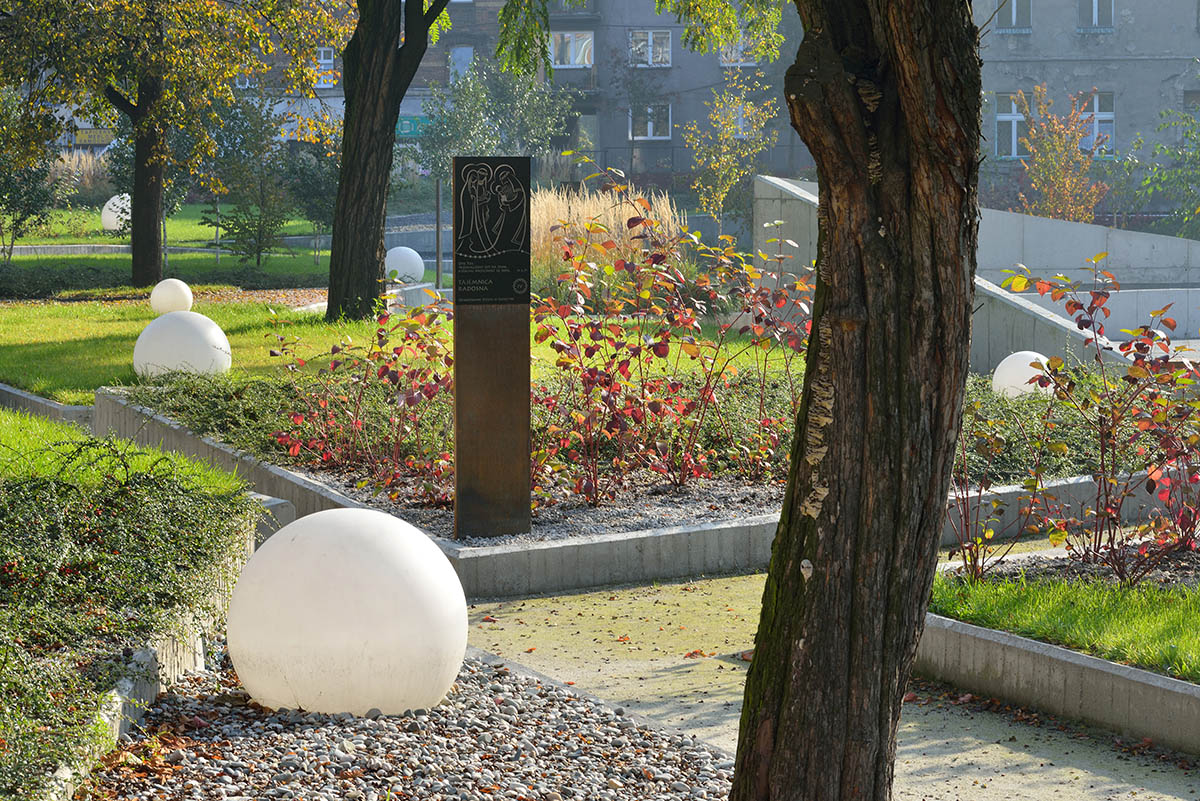 The modern buildings, with their multi-functional spaces, designed for working with youth, organizing exhibitions and concerts, have become the area of relaxation and recreation, by attracting the local communities.

The facilities developed perform the function of religious community centres, places for exhibitions and performances for small theatre and music art forms.

Both buildings have been made part of the new area composition. Thanks to its modern-style design, they stand as a contrast to the Neo-Romanesque Church of St. Hyacinth, while at the same time, sustaining the historical hierarchy through form and scale, emphasizing the importance of the church in the process. Thanks to the use of modern materials, such as Corten and glass, dialogue across generations is invoked. 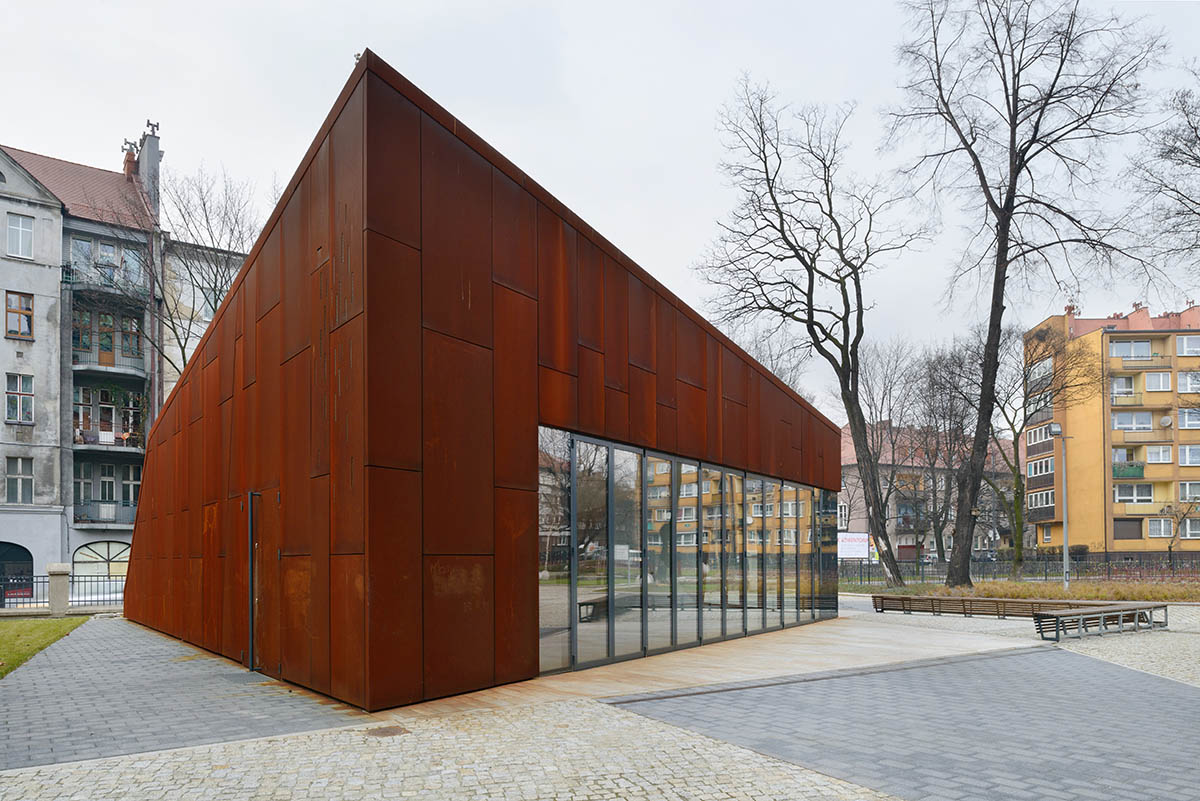 The investment has been designed in compliance with contemporary building best-practice. Precipitation water from the entire area is accumulated in a dedicated retention reservoir, built a few metres below ground level. Rainwater was used during the construction itself and is now used for watering plants in the entire garden. 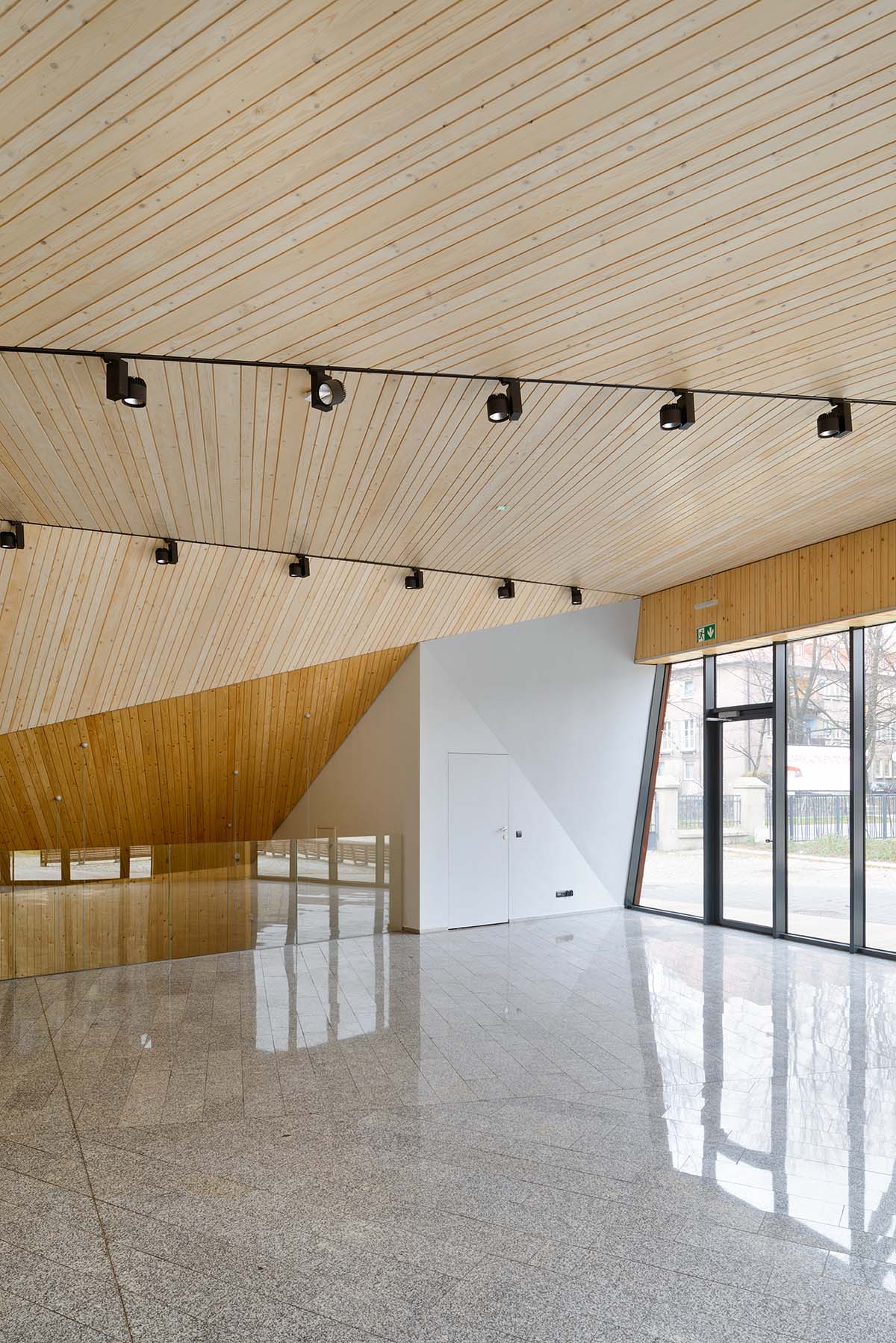 The roofs of both buildings are covered with greenery, which helps the building blend into the backdrop of the old church, while at the same time improving heat management inside the buildings. The main idea behind this project was to revive the surrounding area and restore it to serve the needs of the local community. The garden, which was developed in direct vicinity of the church, has multiple references to St. Hyacinth, the patron of the place and teacher of rosary prayer.

Along the garden alleys, sacral references have been introduced in the form of rosary tablets and centrally-positioned St. Mary’s Grotto, as well as a waterhole. 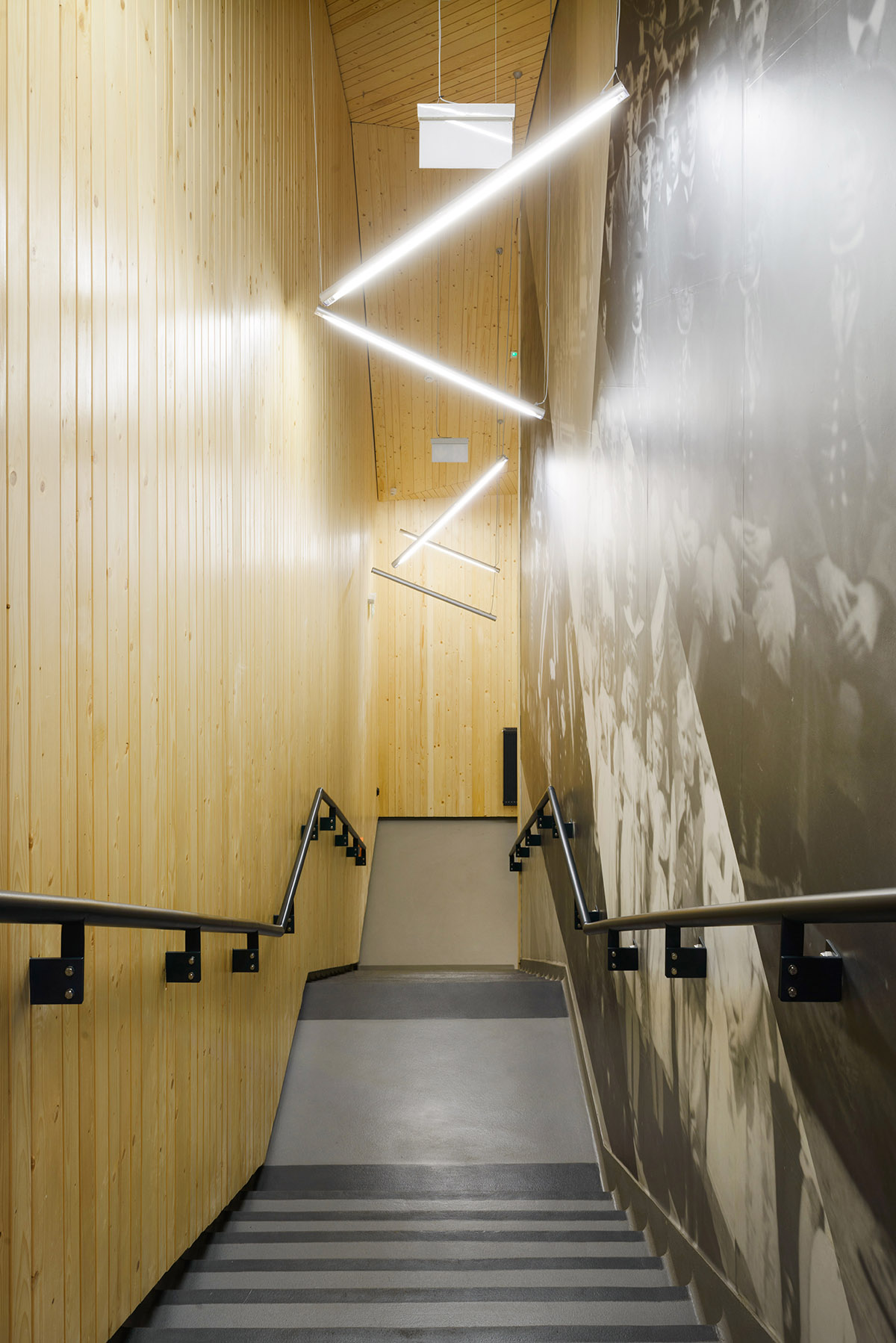 The entire concept is further accentuated by 20 balls, as reference to the local rosary legend. This way, a nameless space is  transformed into a meeting place of religious character, which has become a modern showpiece for the city.

Due to the square’s location and its previous functions, the entire project has been turned into a modern form of public space, serving the purpose of everyday relaxation and recreation. 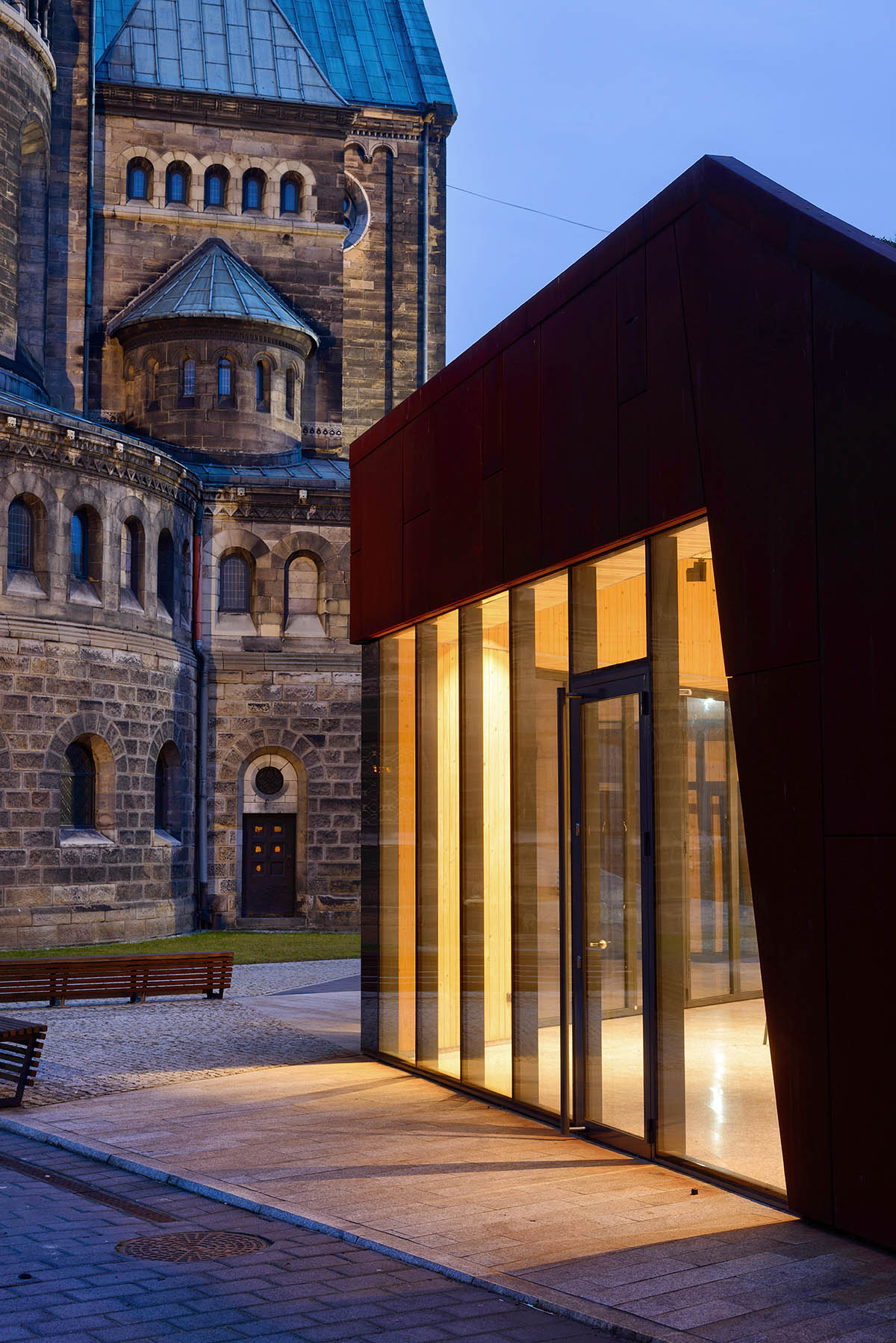 The balanced, geometric layout of plant pots boast different types of greenery, depending on the season. Large stretches covered by one type of plant, wooden terraces and mineral surfaces, make the design assumptions behind the project very clear. Thus, the originally chaotic composition is transformed into a friendly space. Making some of the old trees part of the composition made it easier to blend the new parts of the project into the original landscape.

Near the local parish house, a rehearsal facility and an outdoor stage have been developed (Building A), together with backstage facilities. The pavilion was given a multi-hipped, green roof, which helps the building blend into the surrounding landscape and prevents its blocking the view of the historic church.

With its flexible glass façade, that can be opened upon requirement, the building is positioned towards the church. This way, the building becomes a roofed stage, serving outdoor events over the summer season. 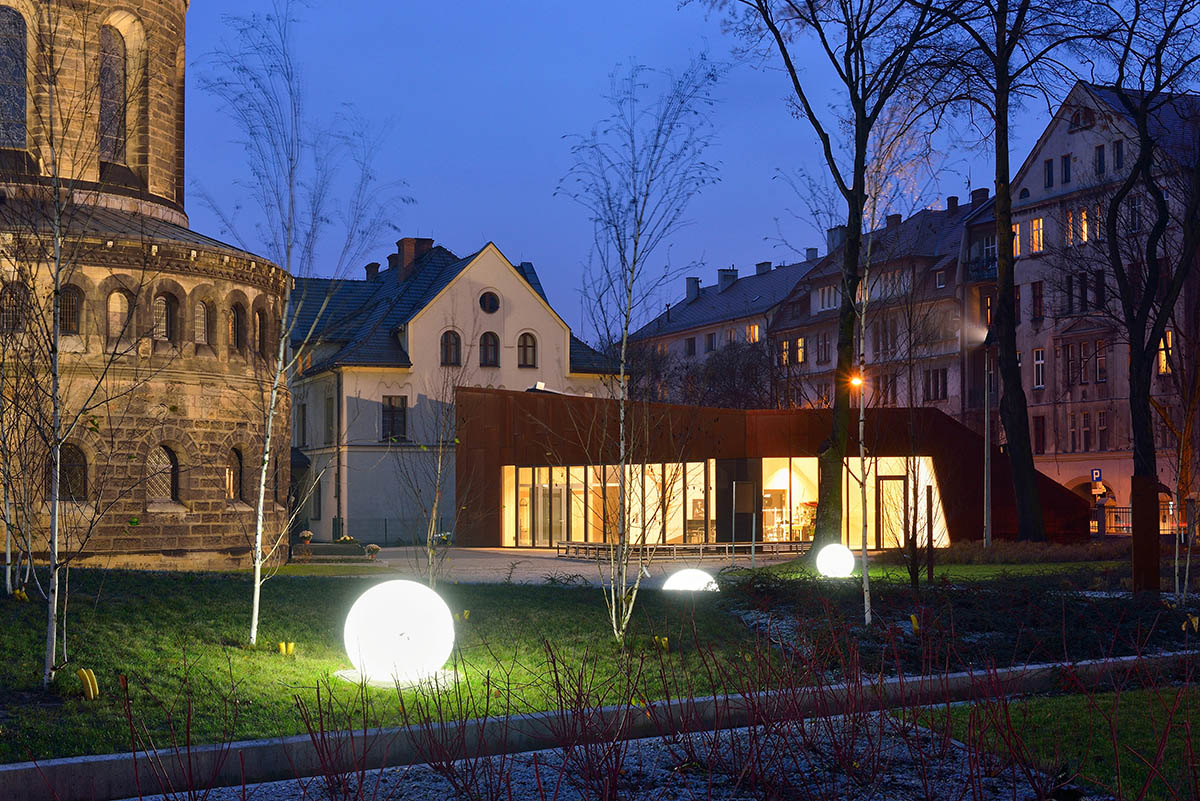 To ensure the proper maintenance of the entire project, in the southern part of the development, a small community centre and accommodation facilities have been developed (Building B).

The building corresponds in style with the larger facility so that the entire project is consistent, both in terms of materials used and overall area development. 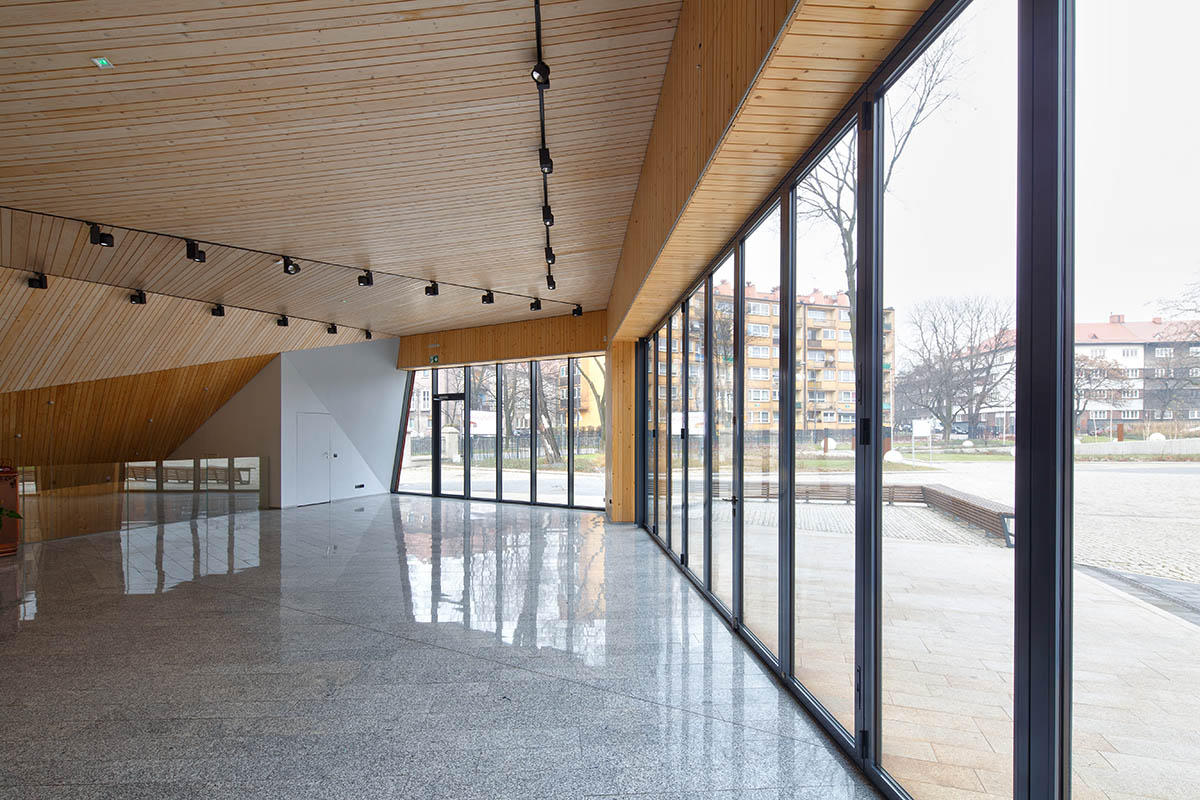 In order to additionally separate this space, a bench was set up in the corner, which is a space-closing accent for the surrounding area (audience zone). This tiny architecture form has been conceptualized to provide a stimulus for visitors to pause and relax. 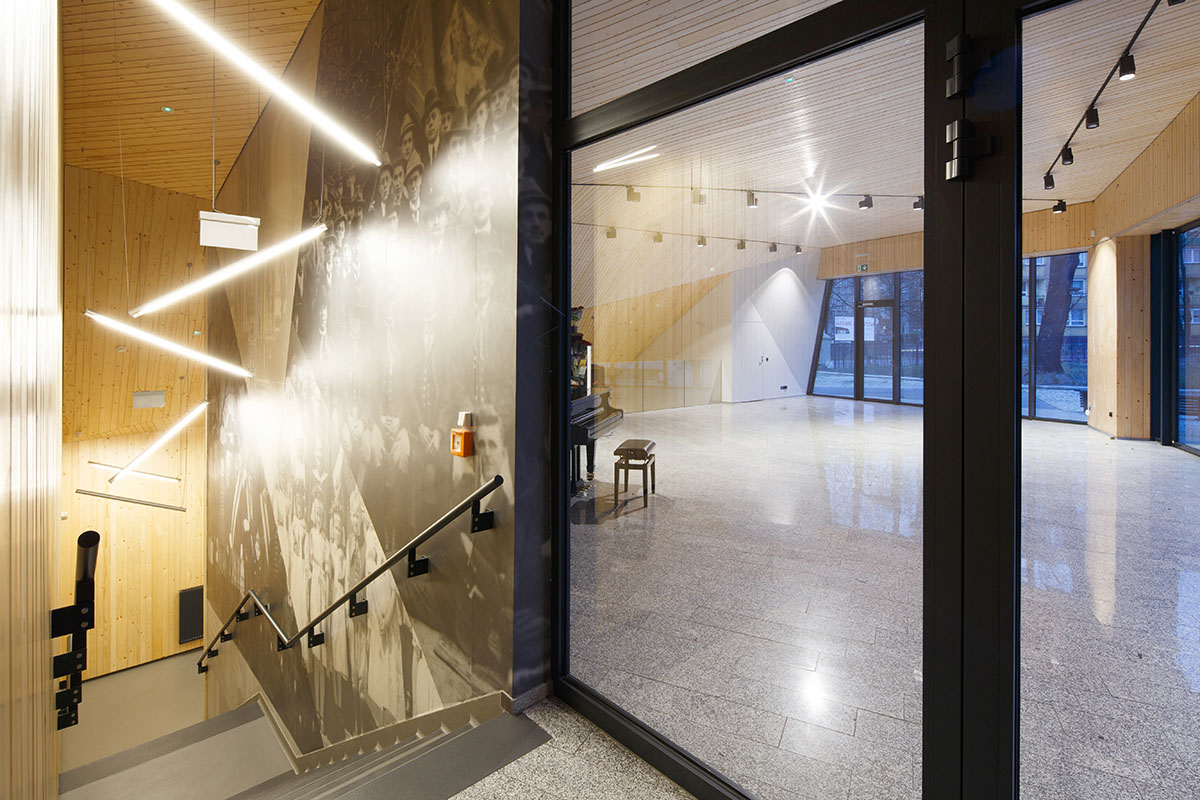 Inside the building, there are a number of halls serving multiple purposes, such as classes, music, theatre events, exhibitions, which is why the interior has been designed with minimalist approach in mind and the use of friendly materials, such as wood and large-format prints, illustrating the milestone events in the history of the Rozbark district in Bytom. 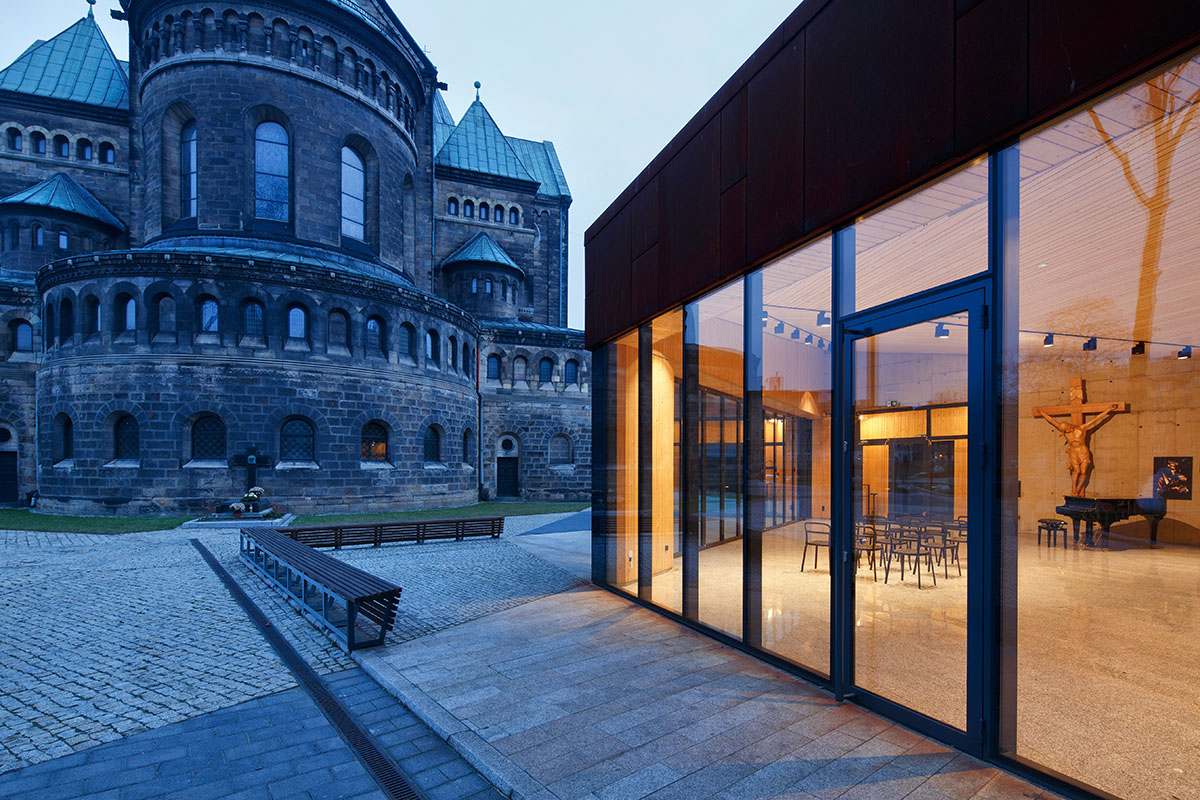 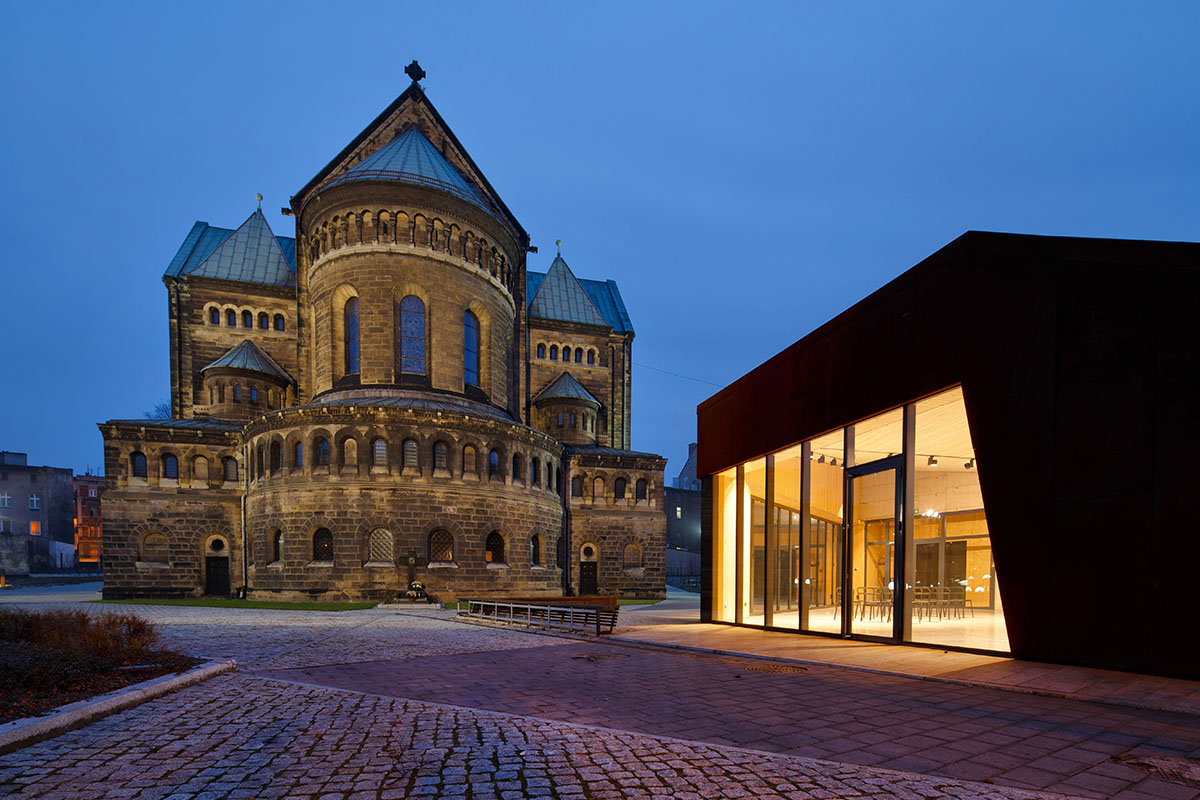 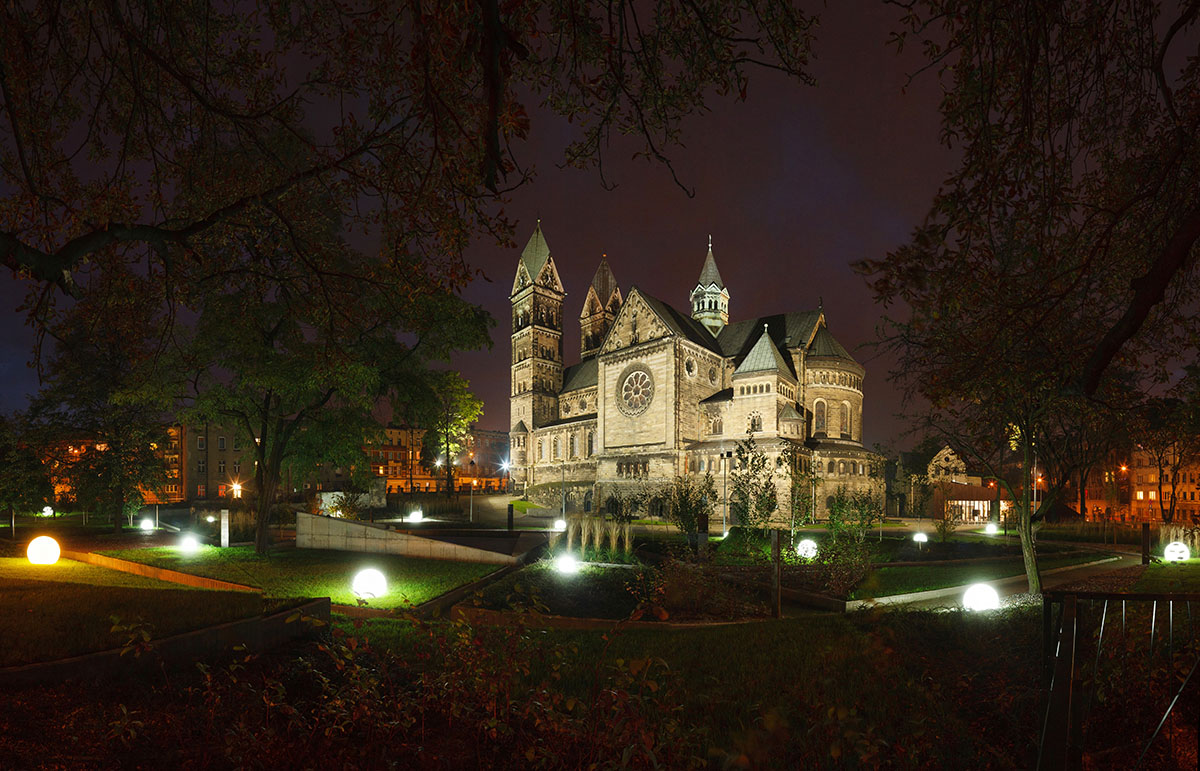 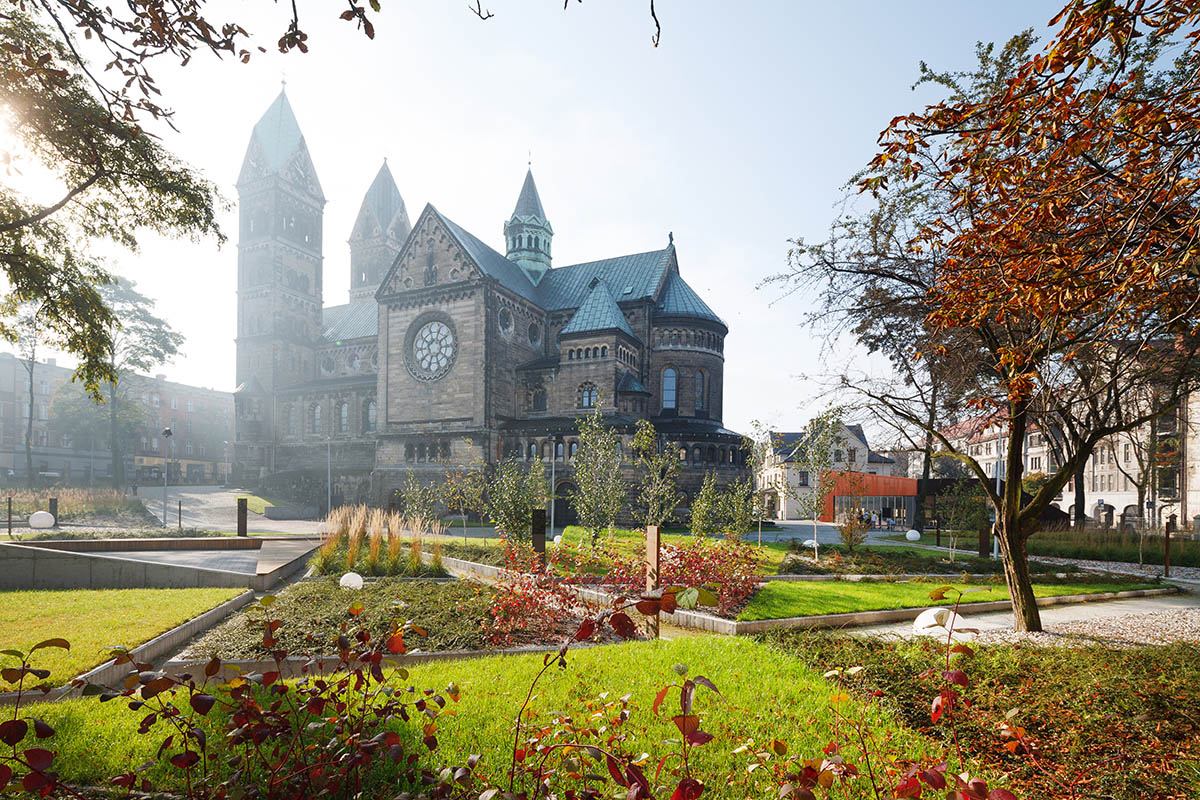