ZJJZ Built The Seeds Made Of Ellipsoidal Surfaces And Clad In Pine Shingles In Jiangxi, China 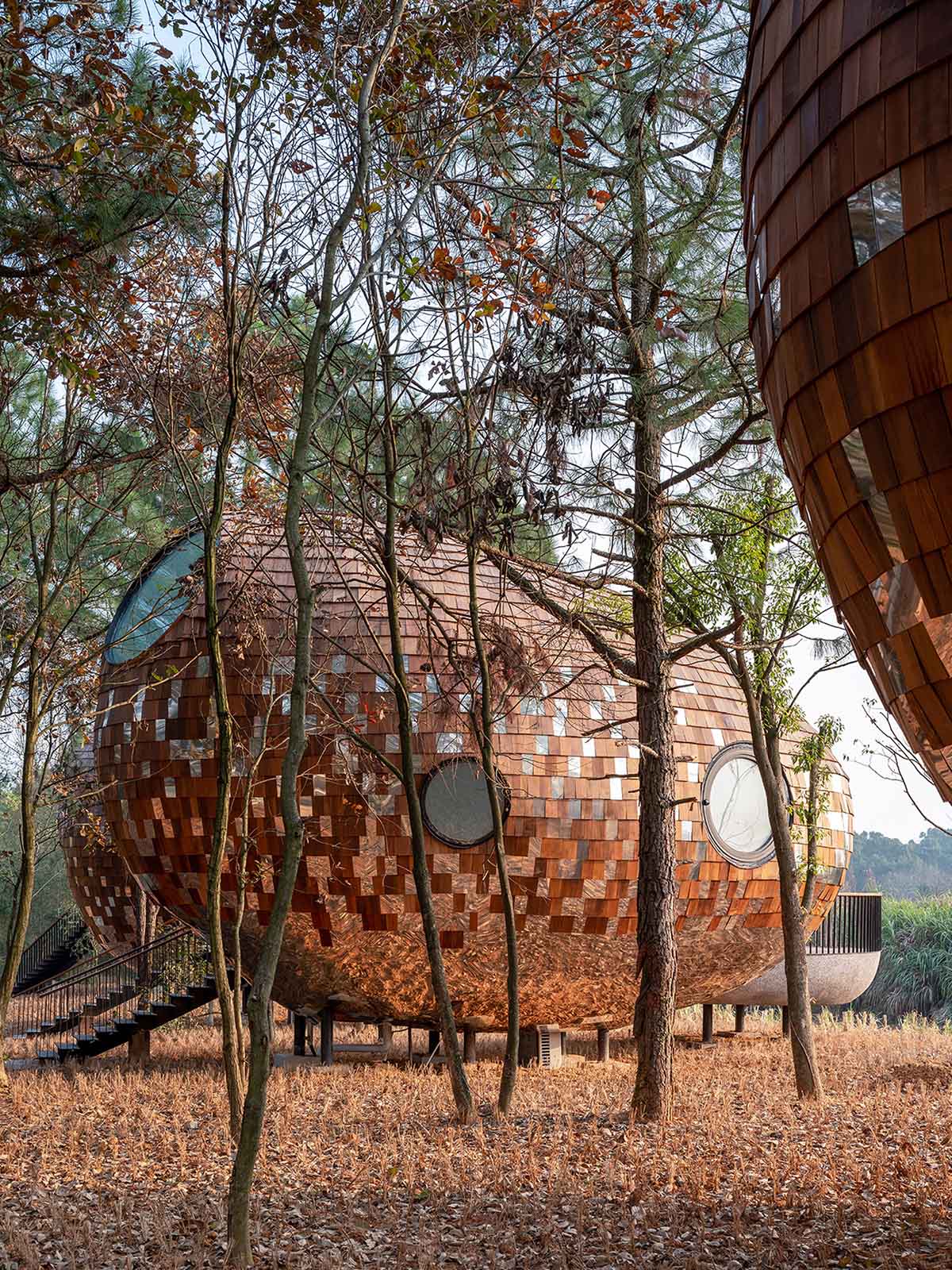 Shanghai-based architecture studio ZJJZ Architecture Practice has built four holiday cabins that are made of ellipsoidal surface and clad in pine shingles with mirrored surfaces in a forest of Jiangxi, China. 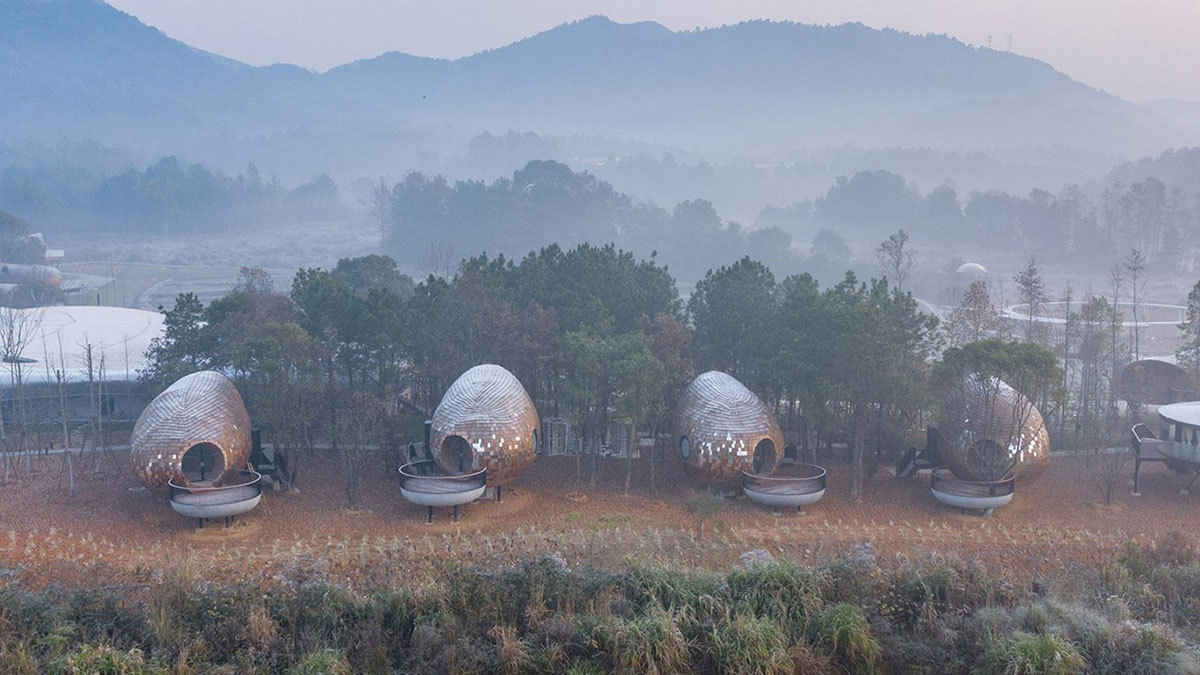 In the project, the architects tried to offer a new spatial experience rather than creating merely imitative forms from the nature, thanks to their ellipsoidal geometry, guests are able to catch views and establish the relationship between the structures and their surrounding environment. 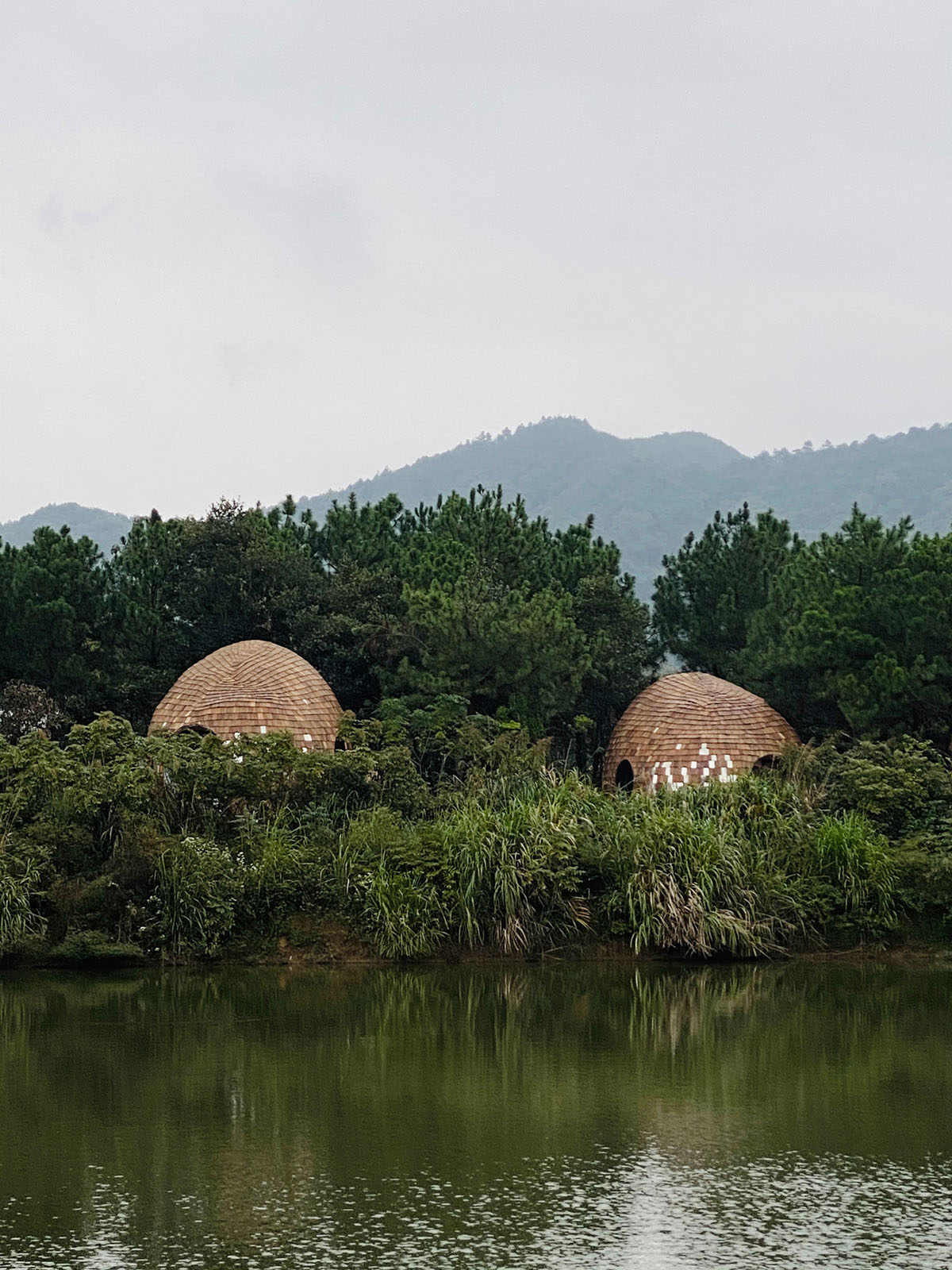 The Seeds, made of four separate pod-like living spaces, seem to arise from another dimension, looking nothing like the studio had originally planned.

Each Seed house is built from a continuous, ellipsoidal surface, but each of them is combined with a mirrored aluminum facade and clad pine shingles. 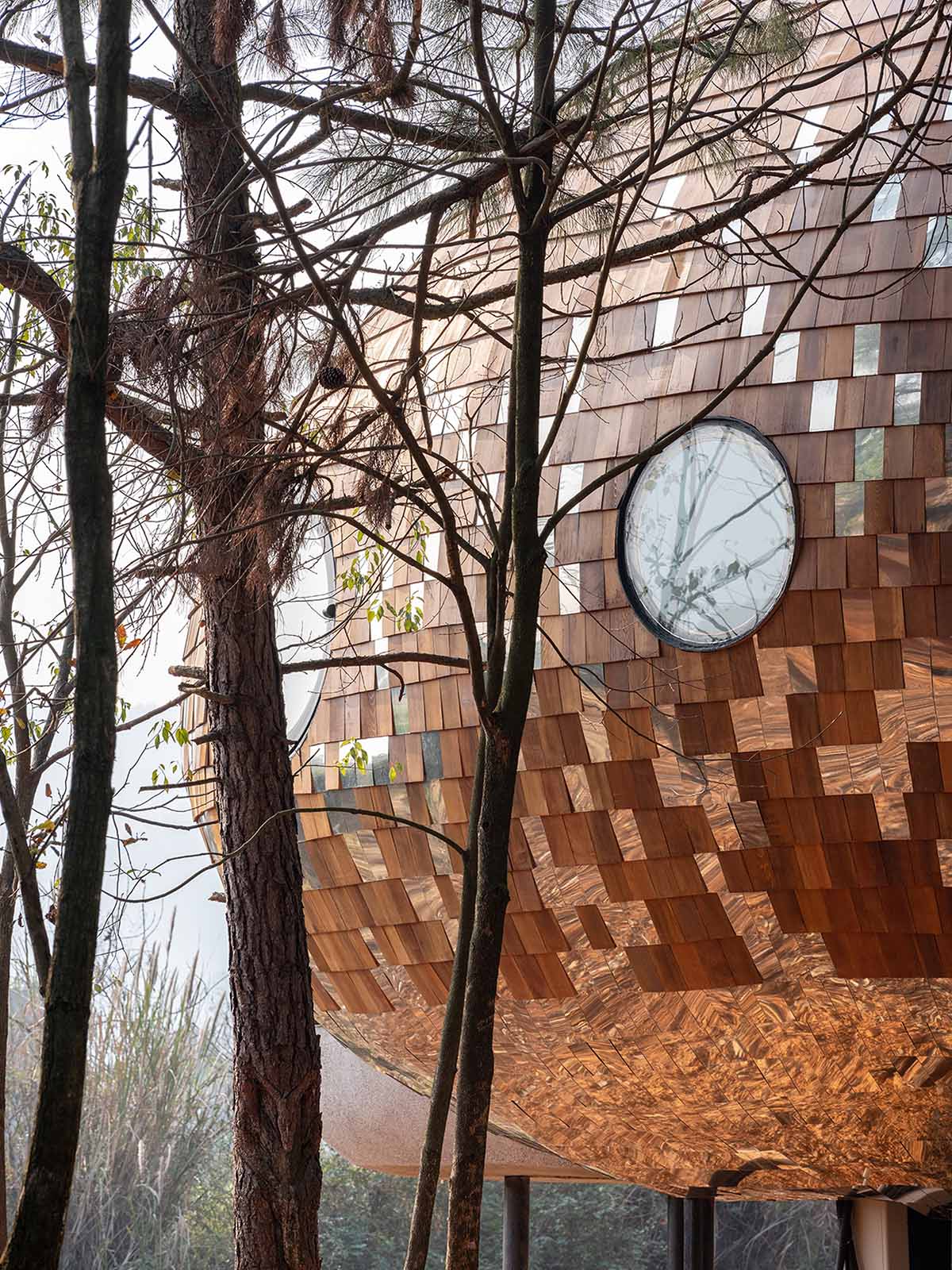 "This metal surface takes on the luster of red soil in winter, green plants in spring and summer, mist when wet, and sunshine on bright days."

"Like the roots of a plant, this reflective cladding anchors each house to the earth, while the pine shingles give the structures a warm, soft aesthetic, allowing the structures to blend into the surrounding nature," added the studio. 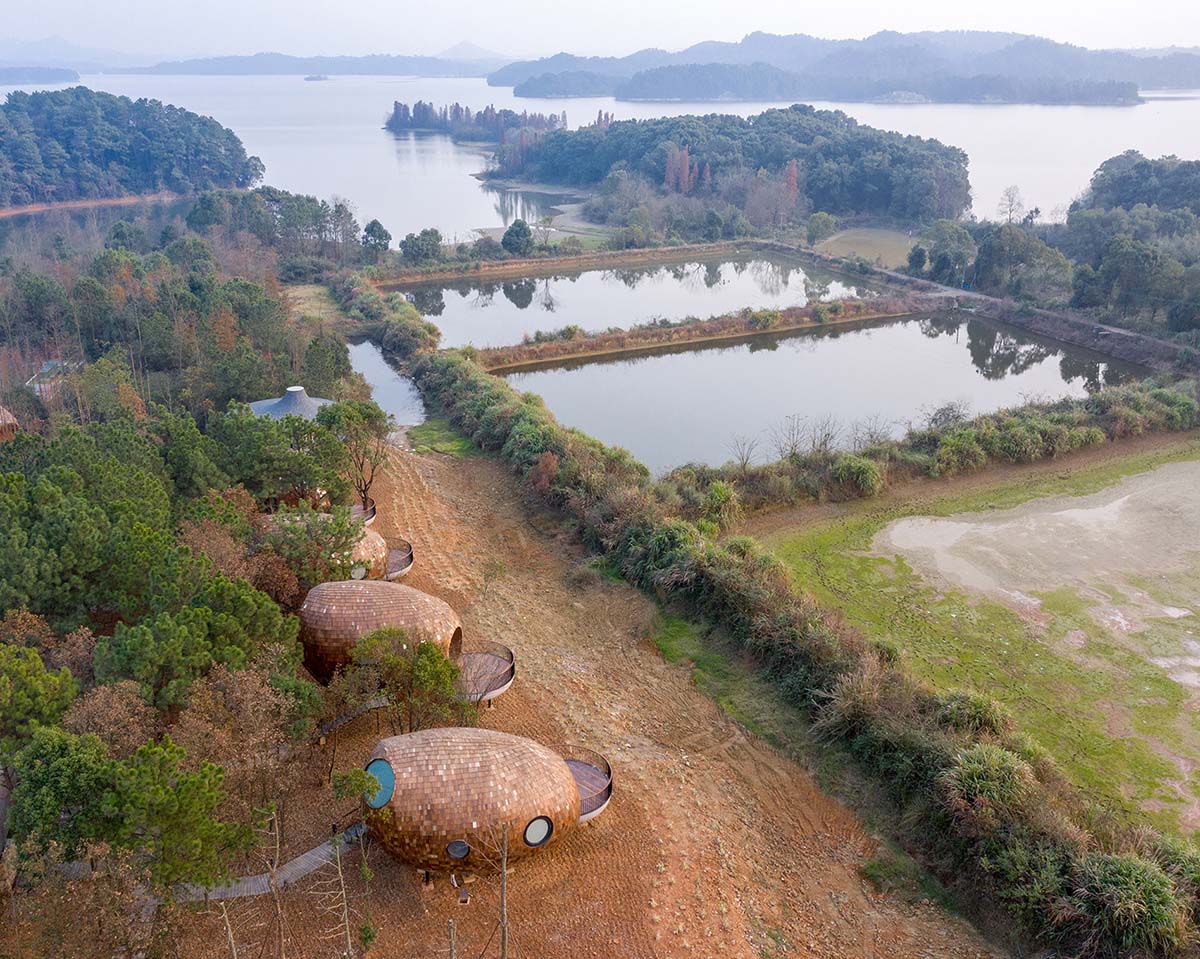 In considering the functional demands of these buildings, each living unit features several circular openings, creating internal sightlines branching off in various directions.

As the studio explained, "for instance, the circular hole on the front of the structure leads to the terrace, which is like a stone platform floating on independent foundations." "A tree penetrates the terrace, providing shade; a round window on the side of the building faces sparse woods, and a larger round window in the attic reveals the sky and the branches of tall trees." Inside, the pods are clad in wood panels, and the stripes formed by the natural color differentiation of the wood further emphasize the ellipsoidal shape of each structure. 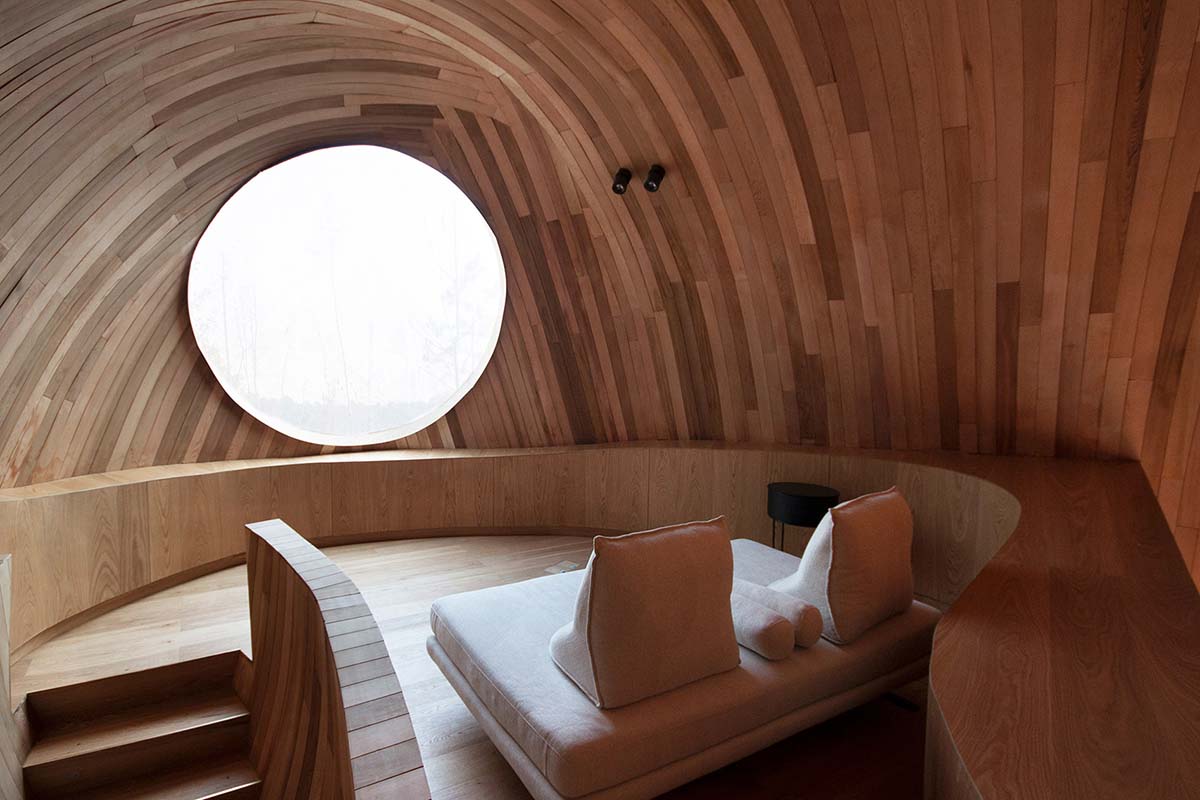 In plan layout, the units has a large master bedroom overlooking the nature, behind the bedroom there is an entrance and bathroom hidden the back wall, while the staircase takes guests to the attic level. A small storage is also hidden the wall. 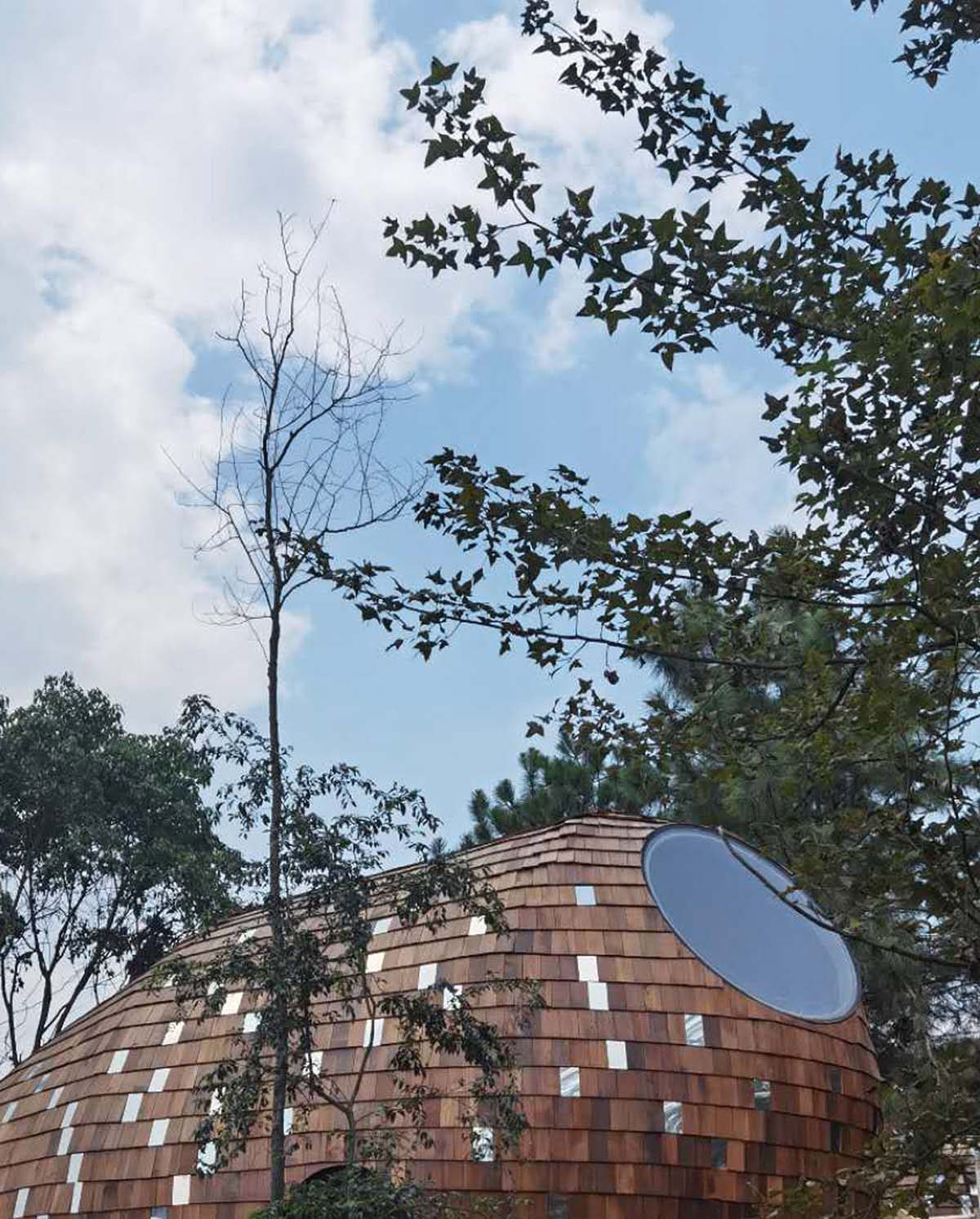 On attic level there is a large space dedicated for children.

The attic and the first floor are connected by an elliptical staircase that intersects the entryway to form an intriguing, carved-out space. 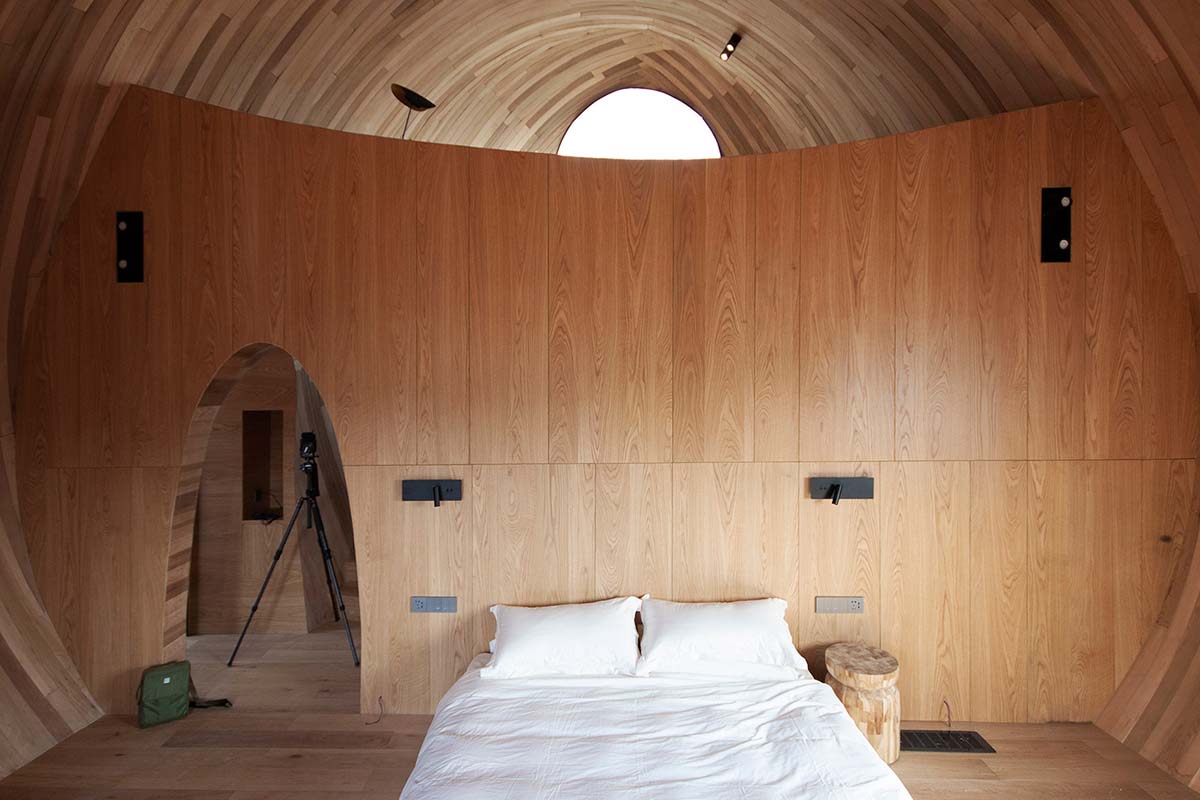 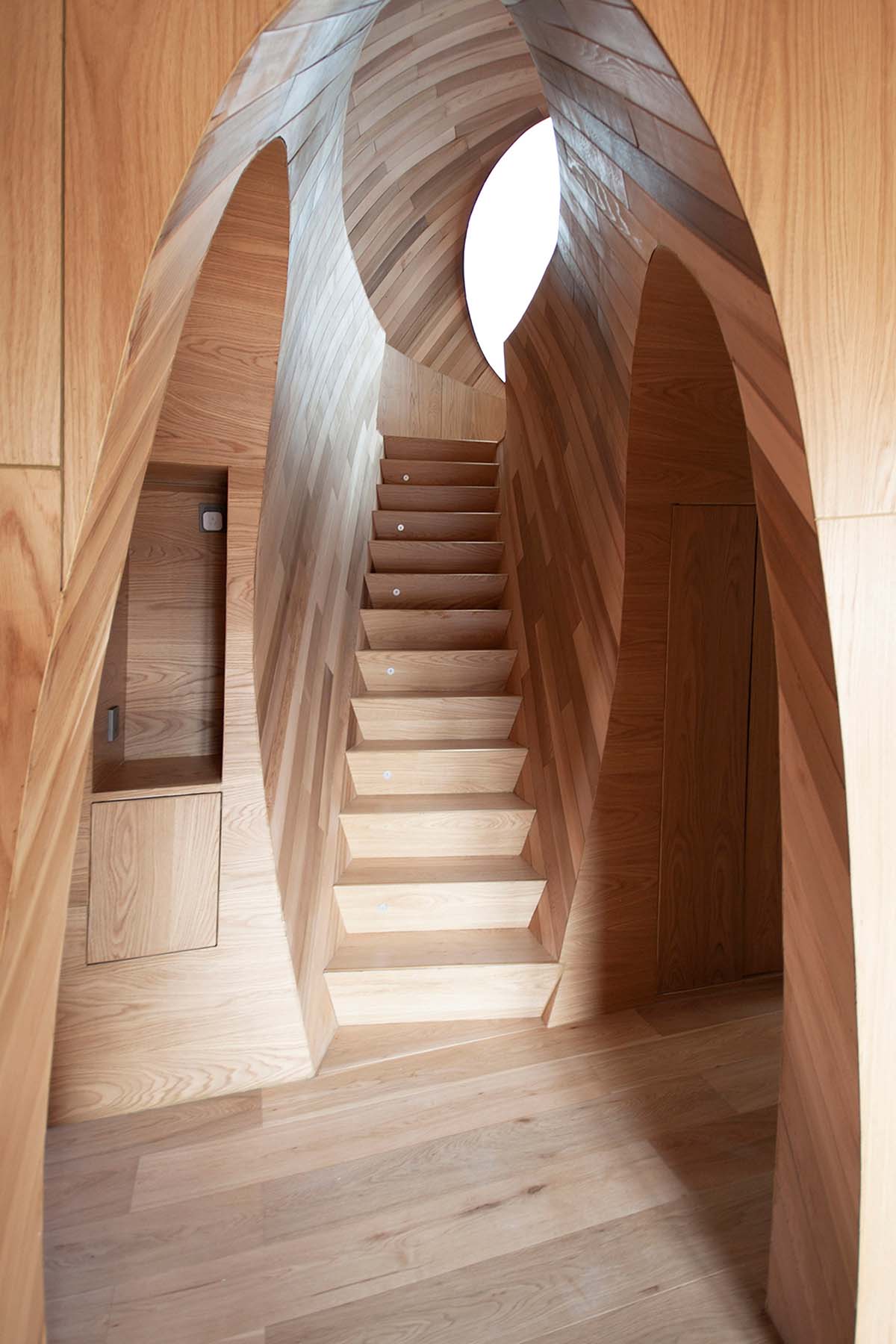 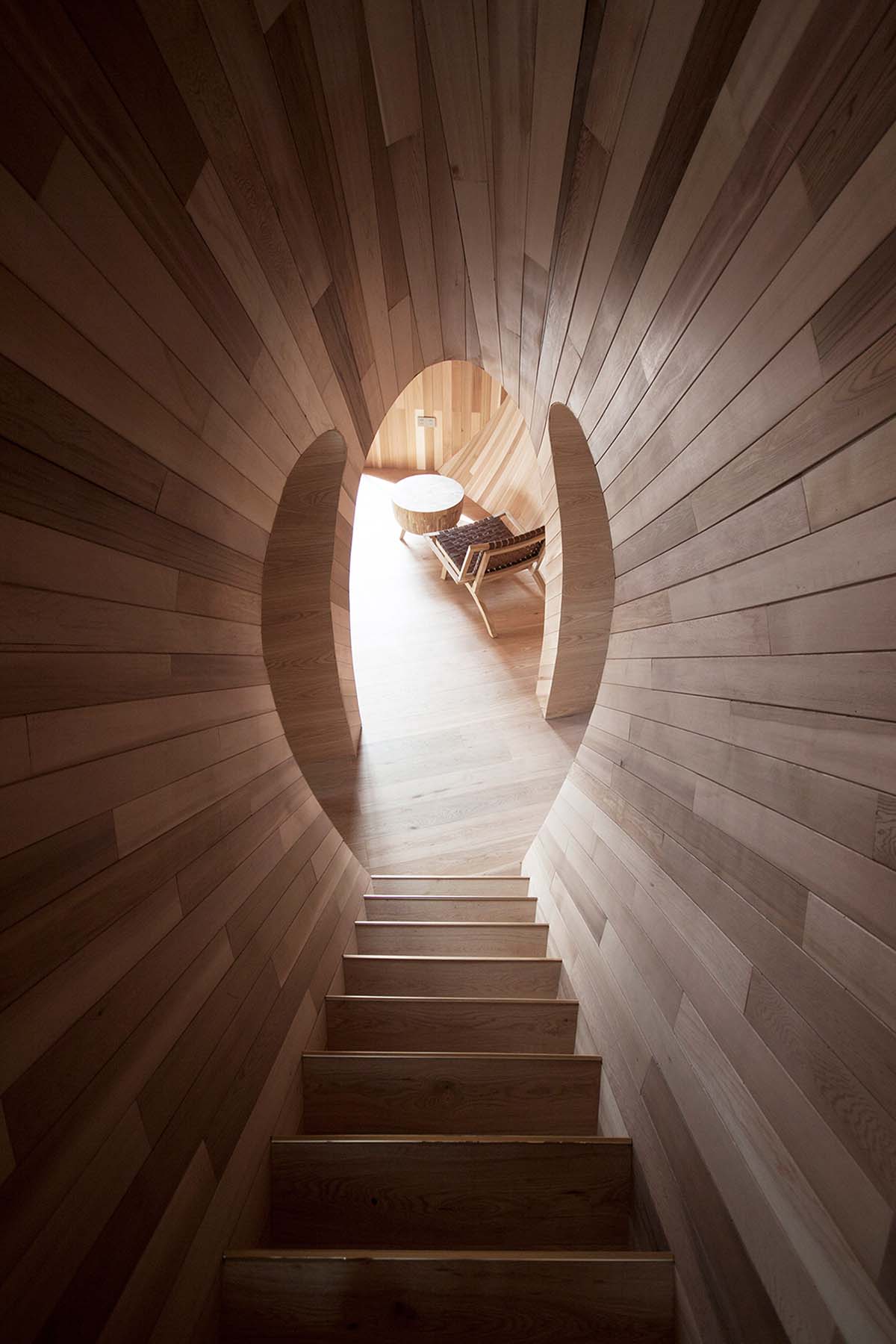 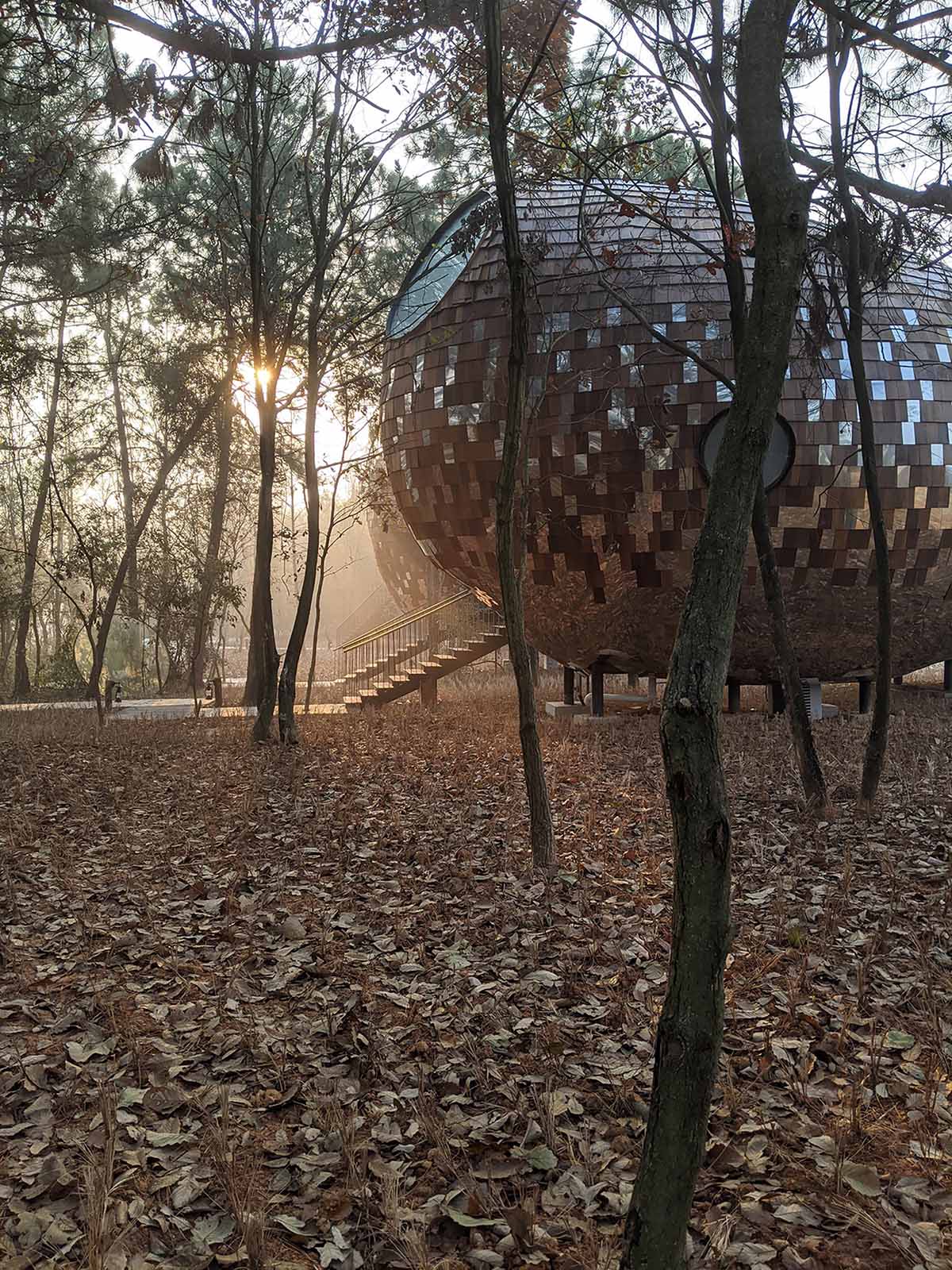 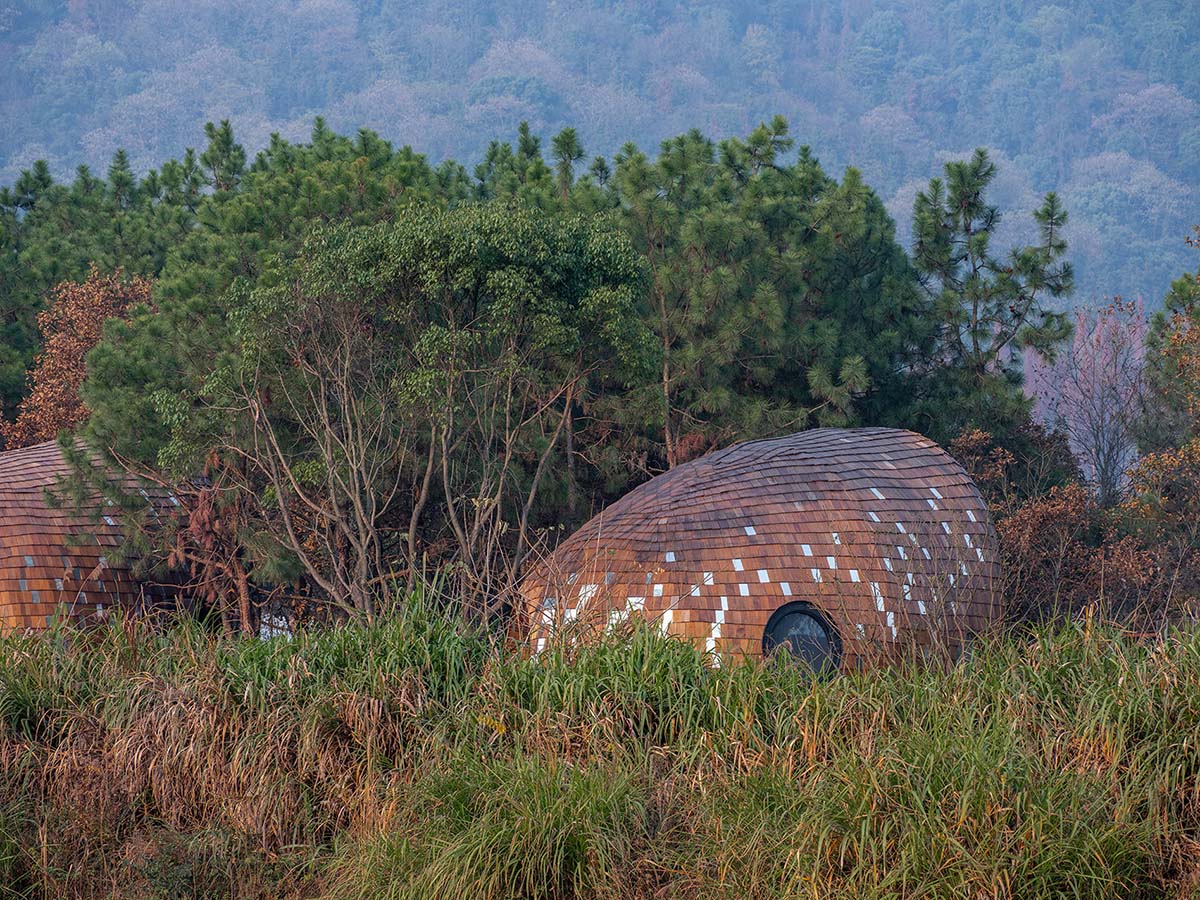 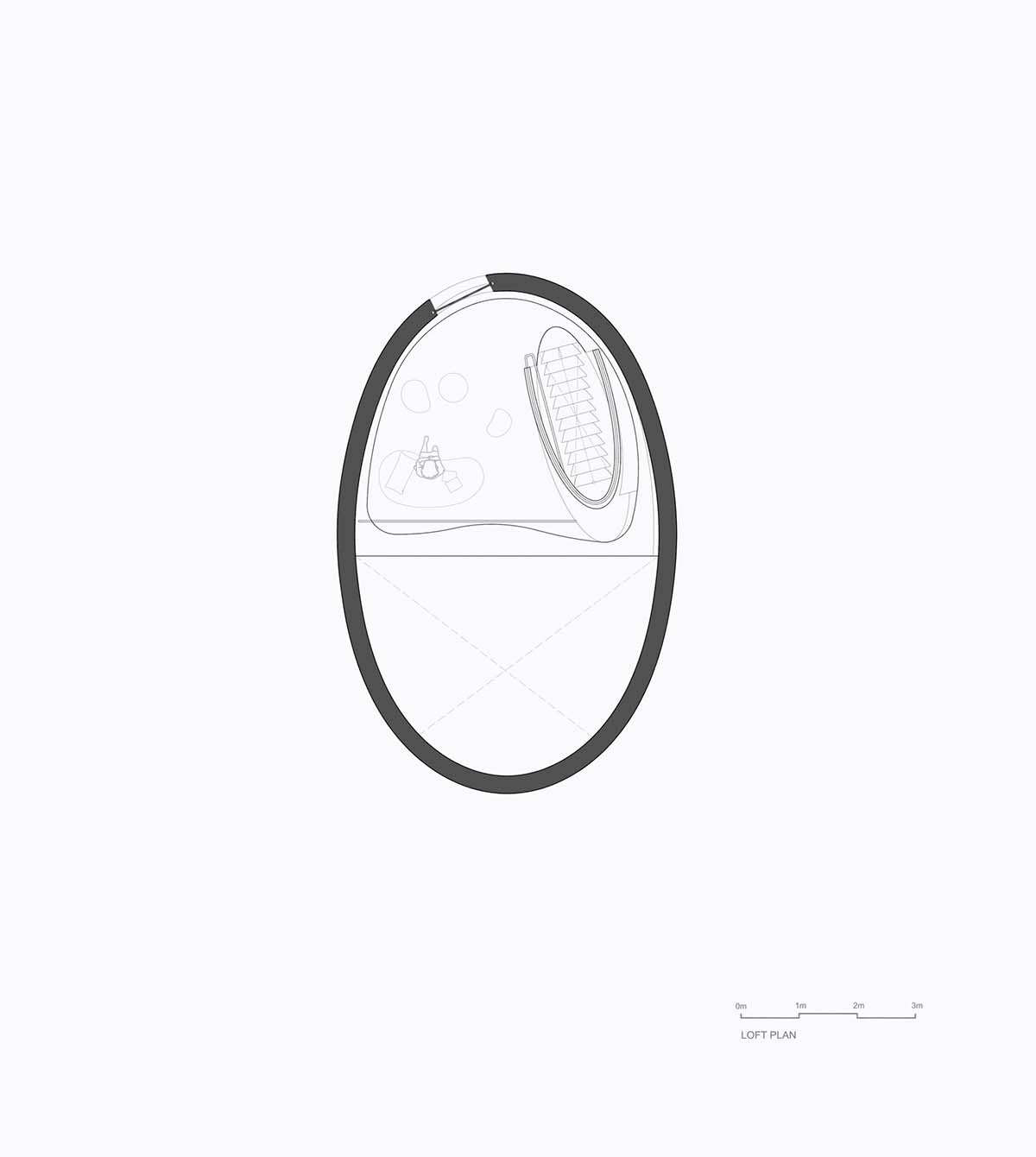