The Palais de Lomé: a journey to the heart of the natural and cultural diversity of West Africa 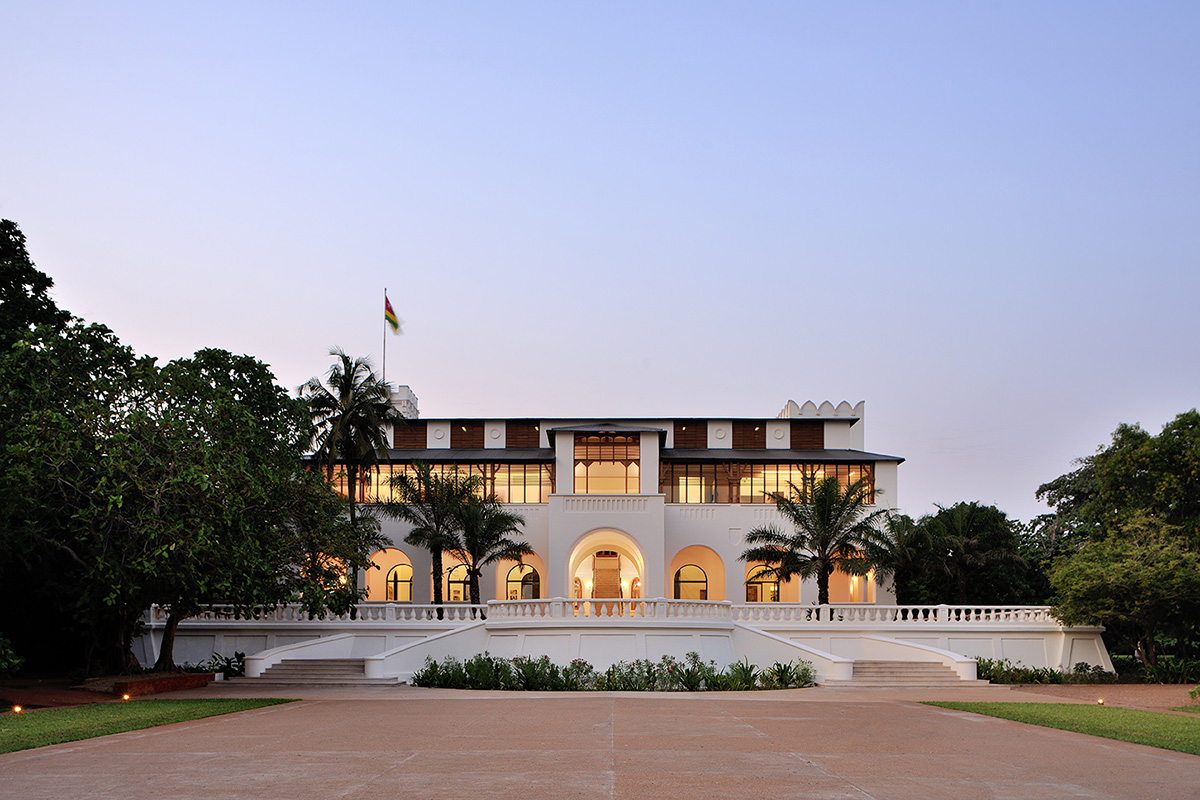 Built from 1898 to 1905 under the technical direction of the engineer Furtkamp, this building was born of the will of Governor August Köhler. It served in turn as the palace of German and French governors during the colonial period. Later, it served as the headquarters of the Togolese state until 1970. From 1976 to 1991, the building had the function of "Palace of the distinguished guests of the Togolese Republic" and became the headquarters of the Prime Minister's Office in September 1991. As a symbolic object of political protest, the building was severely degraded and abandoned following the socio-political unrest in 1990 and 1991. 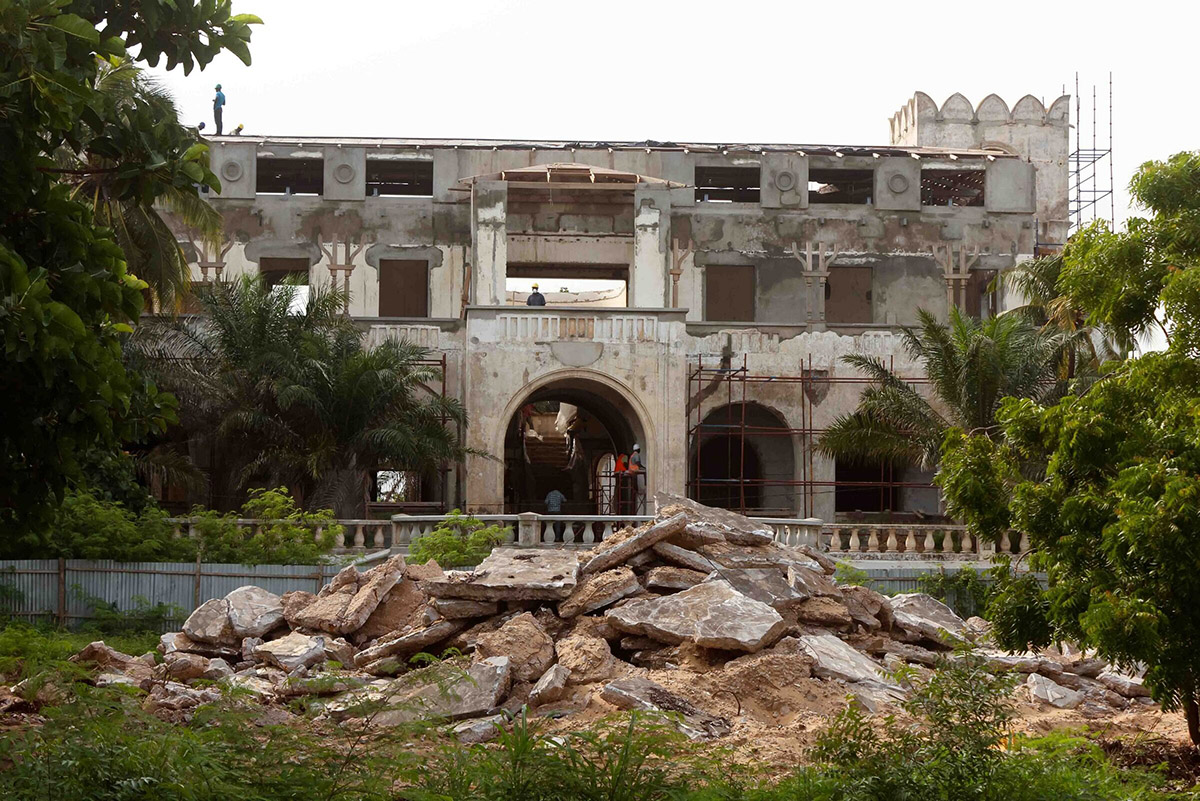 After more than 20 years of abandonment, this once forbidden place, from which power was exercised, has reopened its doors to become the first art and culture centre of the country. This is an opportunity for the Togolese to reconnect with their country's history while giving Togolese values international visibility. 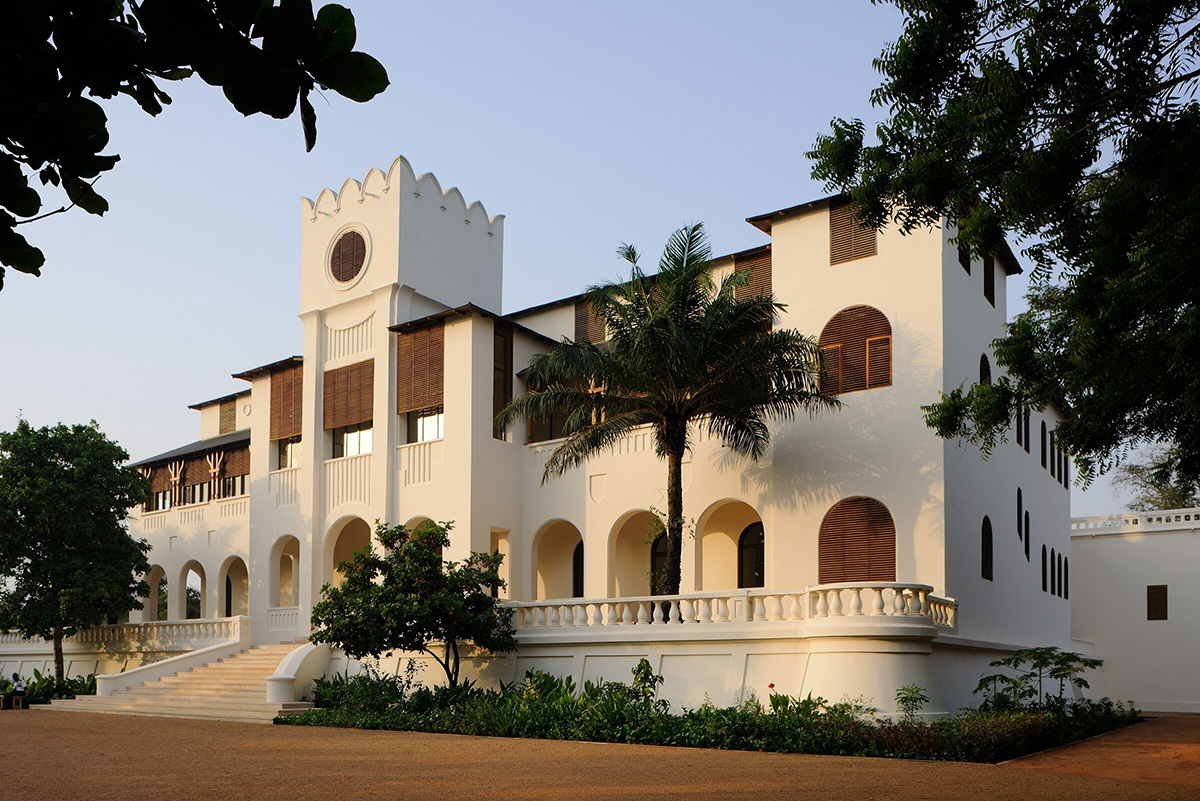 This restoration project was born from the will of the Togolese President, H.E. Faure E. Gnassingbé, to open the Palace to the whole Togolese public, to allow it to reappropriate this heritage place that has fallen into disuse, to reinvent it and build a future for it. It thus becomes a centre presenting culture, design and visual arts for the celebration of the cultures of Africa and its diasporas. The goal, "Reinventing the historical and natural heritage to enhance African creative talents". 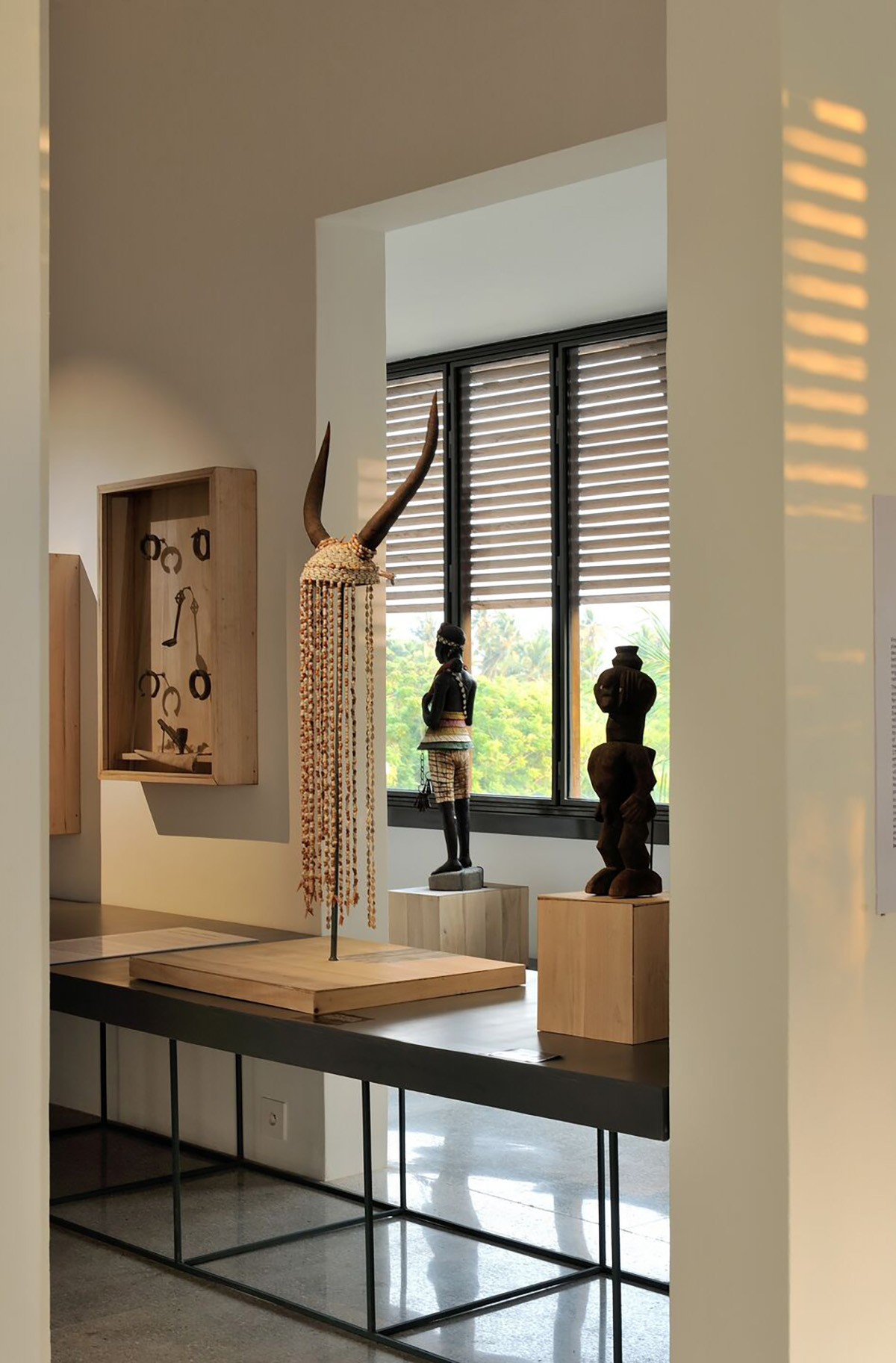 The project was financed by the Togolese state and the project management was provided by the French offices Segond Guyon and ARCHIPAT and the Togolese office Sara Consult. As they did not have the original plans of the building at their disposal, the architects worked hard using other resources. The restoration was done based on existing elements, having survived the turpitudes of time. The architects used archive images and old photographs lent by grandsons of governors who had lived there. 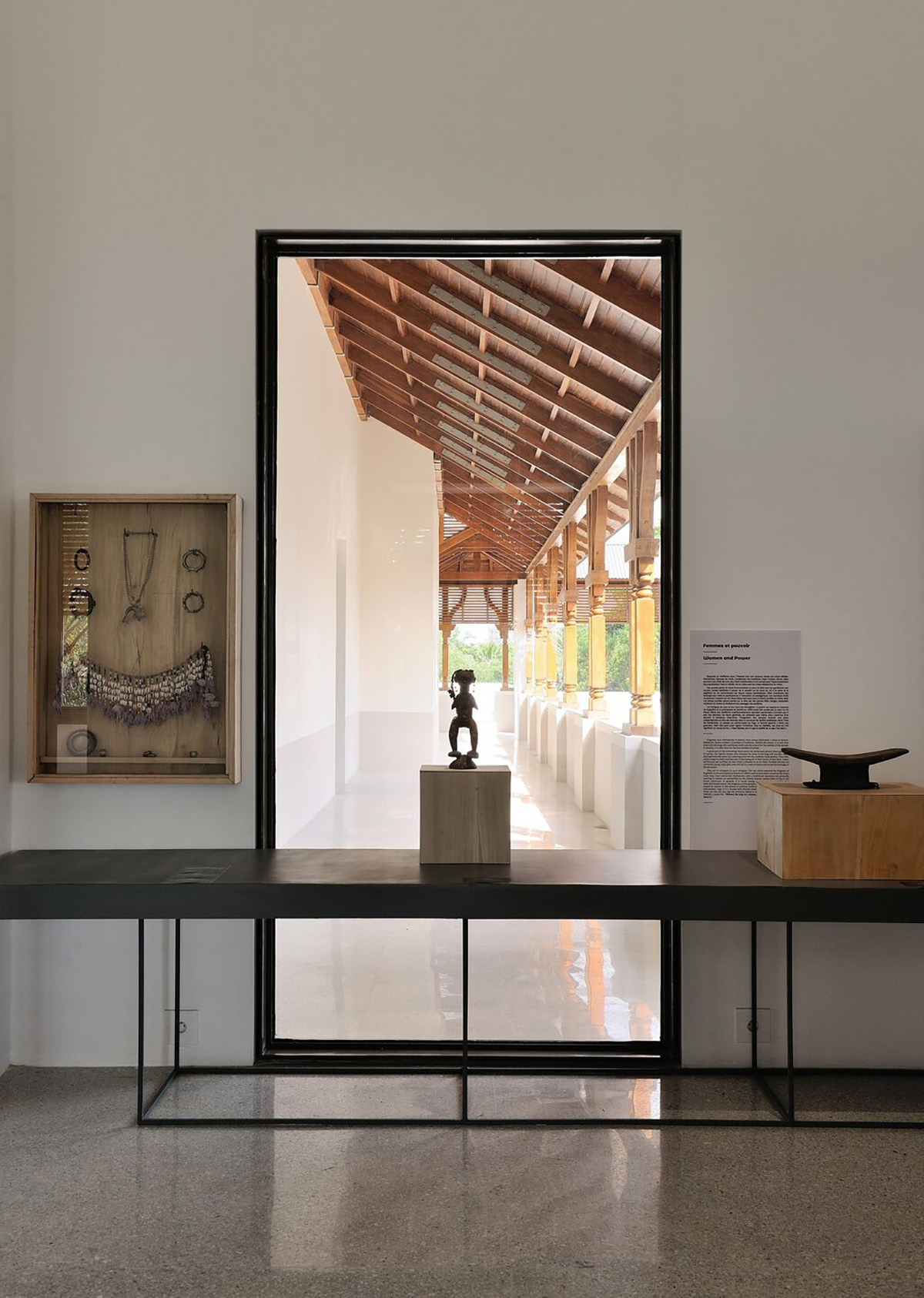 Seven years of work, two billion CFA francs (four million euros) and ten local enterprises were necessary to complete this project; a true affirmation of Togo's independence. Indeed, the goal of the director of the art and culture centre, Sonia LAWSON, was to promote the local economy and to go towards responsible materials. A great work of research was thus made to rebuild the joineries. Teak, one of the hardest woods in the world, was chosen because it is well managed in Togo. Some parts of the walls have been kept intact; a way to dialogue with the past. Cement tiles dating from the time of the German occupation have been restored. The rusty staircase bannister has been saved and the flagpole of Togo has been preserved! 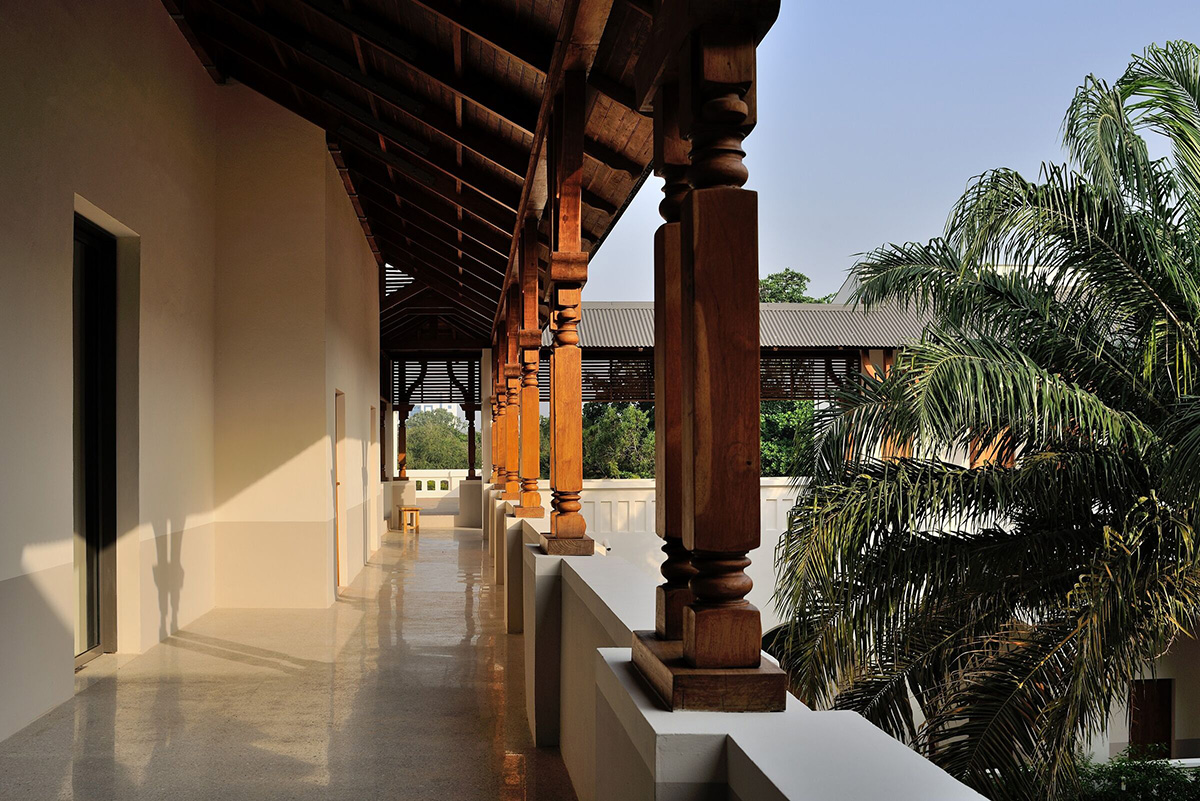 The corridor around the patio

One of the major challenges of this restoration consisted in transforming a rather closed building into a centre of art and culture that could house exhibition rooms, restaurants, bookstore, ... functionalities that did not exist before. The architects had to partition several spaces to create air-conditioned exhibition rooms. They also restored the galleries that protect from the sun all around the palace; these had disappeared in the 1970s. At that time, the arcades over those galleries were removed to enlarge the palace, which had become too small to house the Togolese presidency. 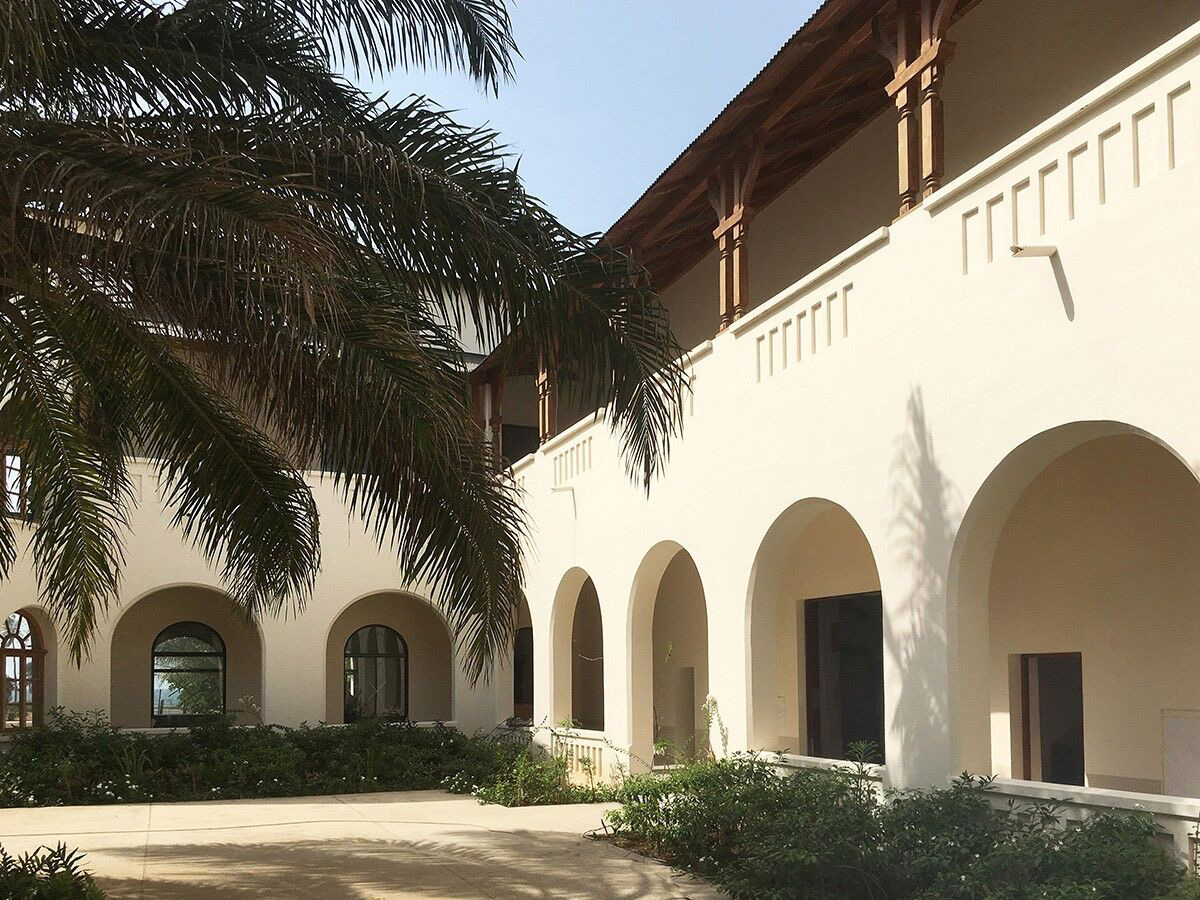 This imposing building is marked by its arcades and wooden shutters, but above all by its towers, one of which dates from the medieval period and the other from the oriental period. Behind an apparent symmetry and a mixture of architectural styles, visitors stroll through the rooms and corridors to discover the different exhibitions. The terraces, the large openings and the shaded patio create a strong relationship between interior and exterior. The outdoor landscape blends with the exhibitions. 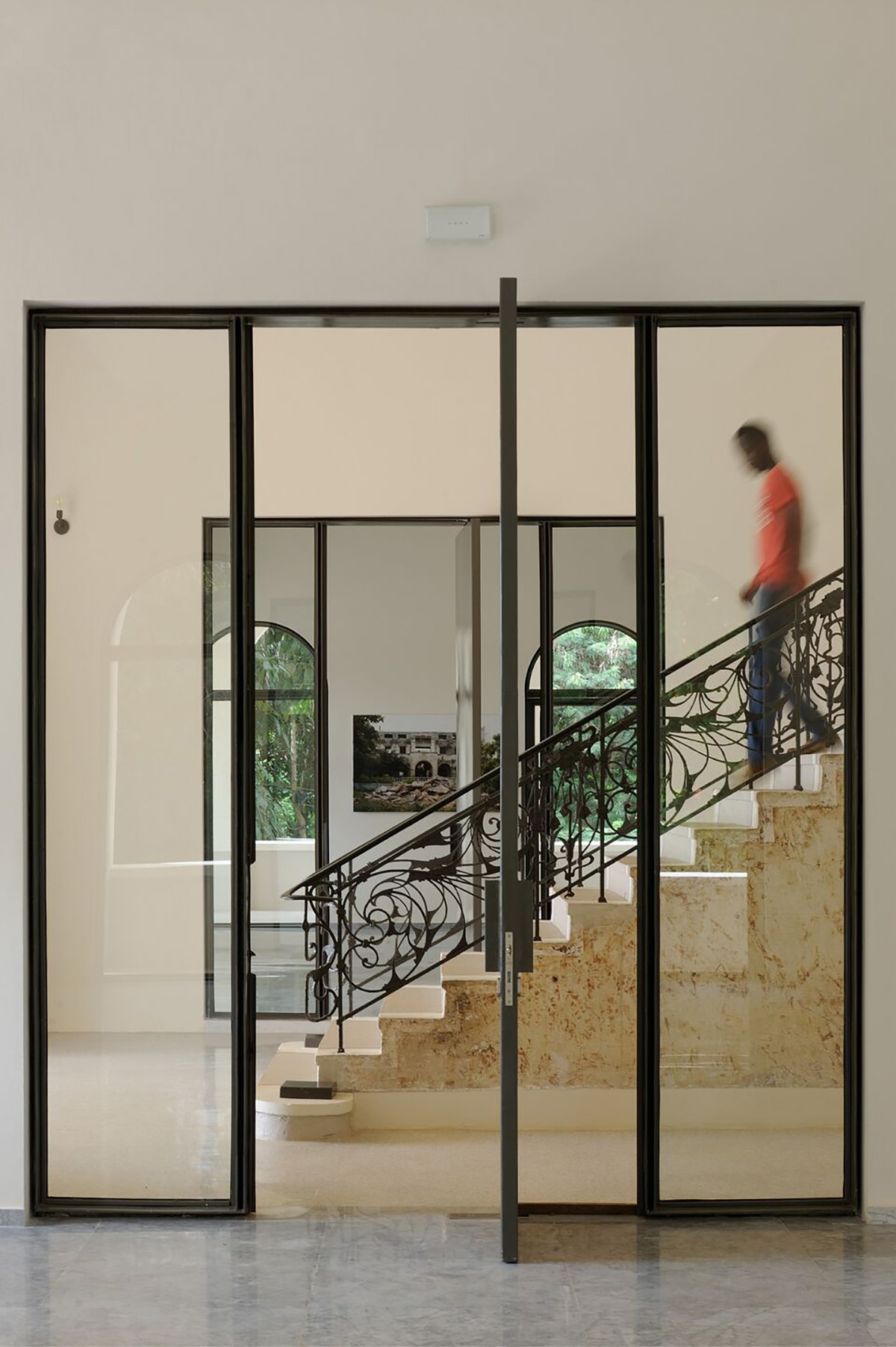 Exhibition room, transparency and connection between interior and exterior spaces

Around the palace, the 11-hectare park has been entirely rehabilitated. It was designed by the landscape architect Frédéric Reynaud, inspired by the landscapes of Togo; a way to allow young Togolese city dwellers to appropriate the botanical wealth of their country and, by extension, of Africa, in the heart of the city. After a long ethnobotanical study, more than 500 species (from Togo and other African countries) adapted to the climate of Lomé have been planted. Such a wide park in a city centre is a first in West Africa and it makes Sonia LAWSON proud. In the shade of the hundred-year-old trees, she takes pleasure in talking about the different species planted and the 40 species of birds that inhabit the place and lull the visitors' walk with their songs.