In the age of global integration where the movement of financial flows, trade of goods and services, exchange of knowledge and technology as well as the mobility of people become increasingly viable, the world has never been more connected. To further enhance international exchange, events such as congresses, conventions and trade fairs are conducted in various major cities across the globe. They bring together entrepreneurs and professionals in various sectors to launch projects, disseminate information and establish business ties. A previous study states that 80% of companies believe that fairs are not only as effective as direct sales in terms of closing sales process but as well as the best venues to create discourse regarding trends and innovation.

Spain garnered the 4th spot by number of meetings organized in 2017 according to statistics conducted by the International Congress and Convention Association (ICCA). Madrid hosted 153 major fairs in 2017 including FITUR 2017, Salon del gourmets and Biocultura having 40,130, 93,906 and 63,811 total participants respectively. Valencia hosted 54 fairs with CEVISAMA and the Feria del automovil. Barcelona, on the other hand, is positioned first in the global rankings with 195 meetings in 2017, surpassing Paris and Vienna. Major congresses held annually in Barcelona include Comic con, Sonar for music and technology, World Mobile Congress and Smart City congress .

A big part of the success of these congresses are attributed to the stand, pavilions and installations that showcase the products, programs and valuable information about the participants. These serve as a firsthand tool upon which participants can showcase themselves to the public. 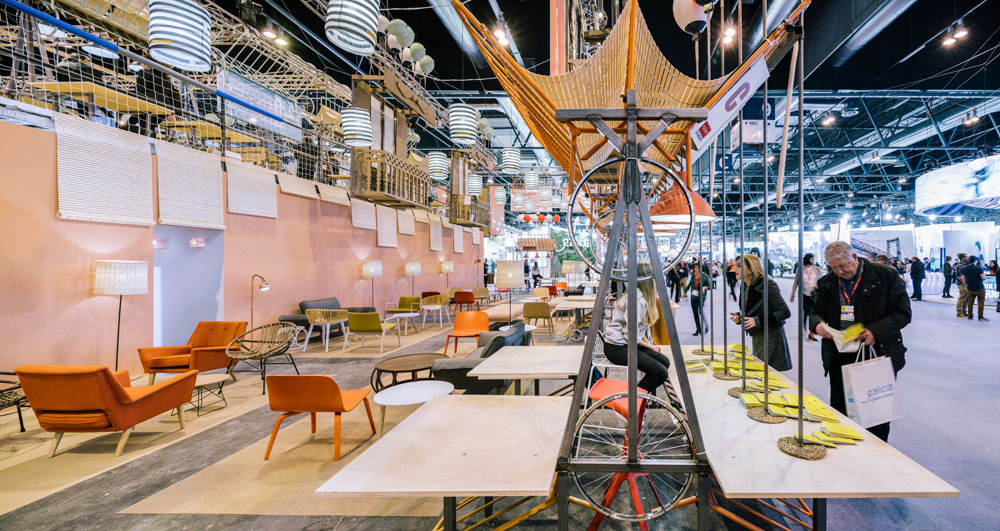 The exhibition pavilion of Madrid is inspired by the experience, customs and traditions of the Rastro, a local outdoor market often held on Sundays and holidays in the historic center of Madrid, in the popular neighborhood of La Latina, for more than four hundred years. The studio led by the architect Izaskun Chinchilla tried to capture the feel, energy and history of the market into its pavilion design, incorporating elements such as the light poles, bay windows and balconies. All the materials used in the pavilion were recycled. Different pieces of street furniture found in the city were used such as cardboard plates for the balconies, bicycle wheels for the counters or security fences for the substructure hanging from the ceiling. 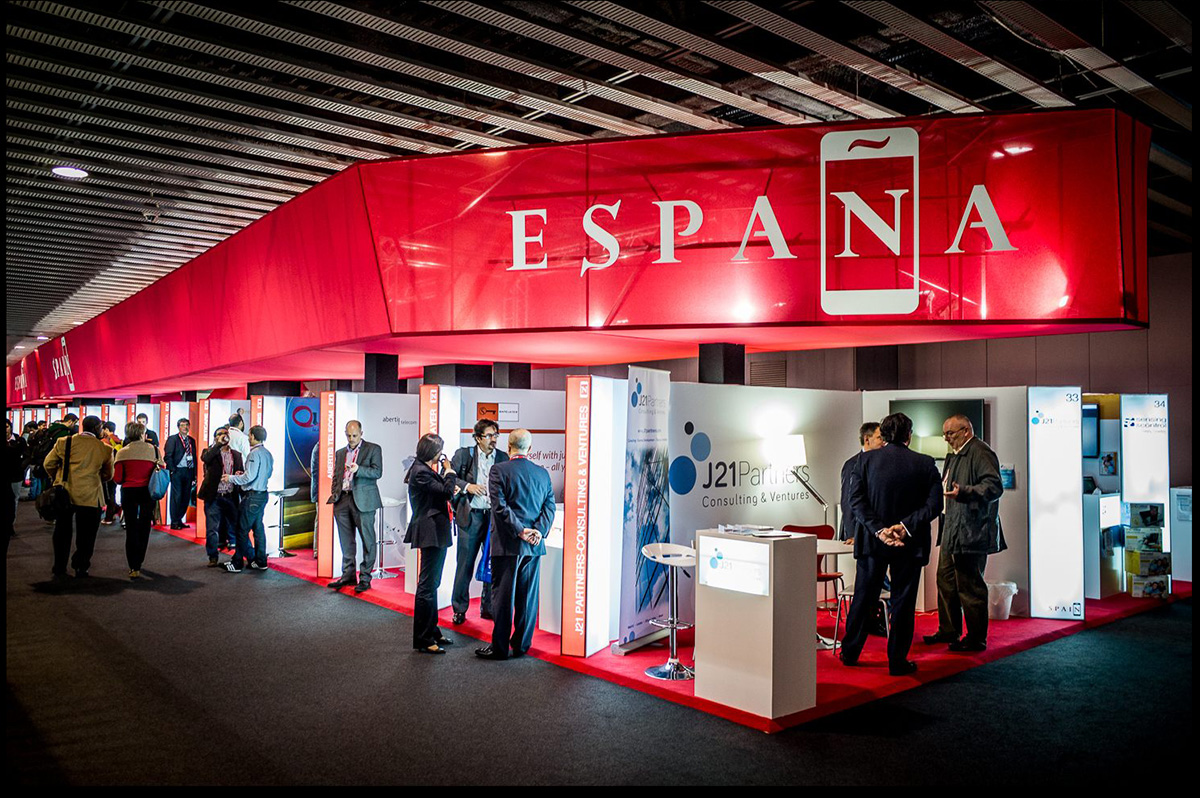 The Spanish stand at the World Mobile Congress in 2018 employed a striking bulkhead lighted sign suspended on the ceiling. Printed vinyl graphics on stand-alone walls are installed to divide the different zones of the stand. An information desk is also provided at the front corner. Both the bulkhead and platform are in red to create a visual frame that attracts visitors into the stand. 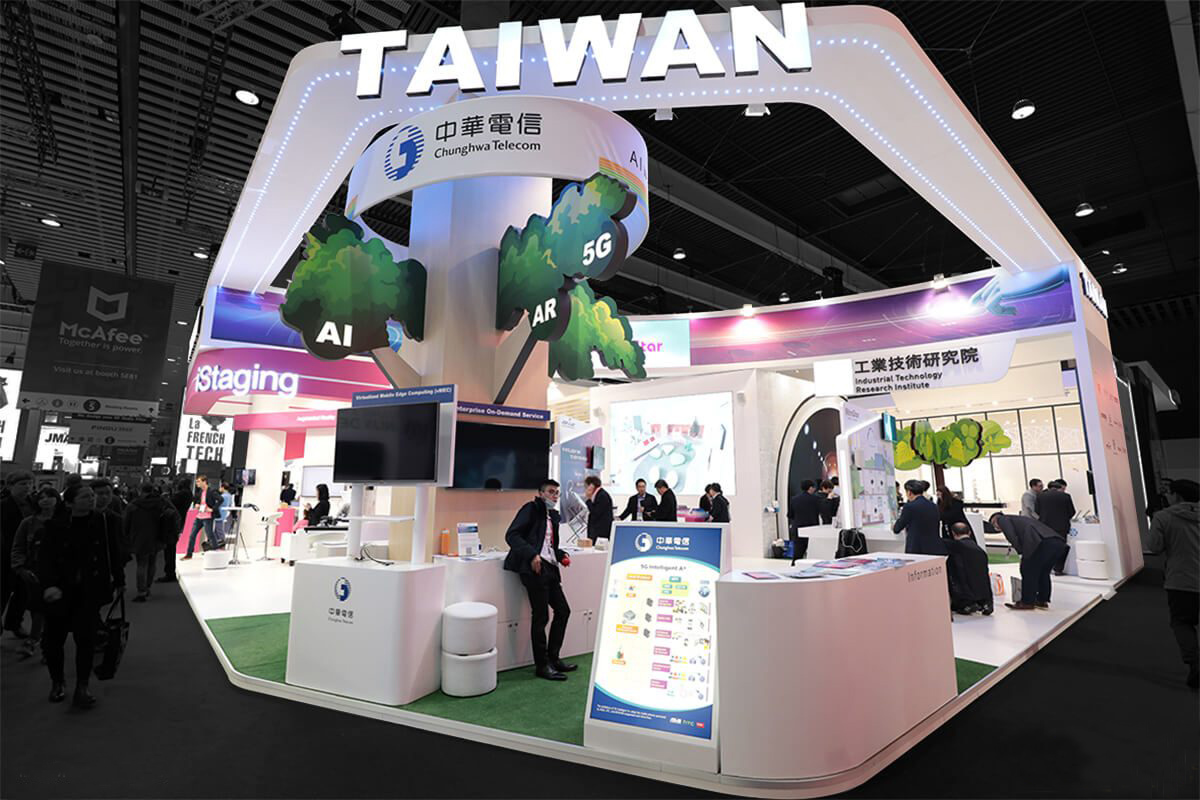 The Taiwan stand, designed by King One design at the MWC 2018 bear the concept “embrace” with the a large circular ring that resemble welcoming arms open to embrace the audience. Curves and smooth edges are also used to imply a softness and gentleness, further reinforcing the embrace concept. 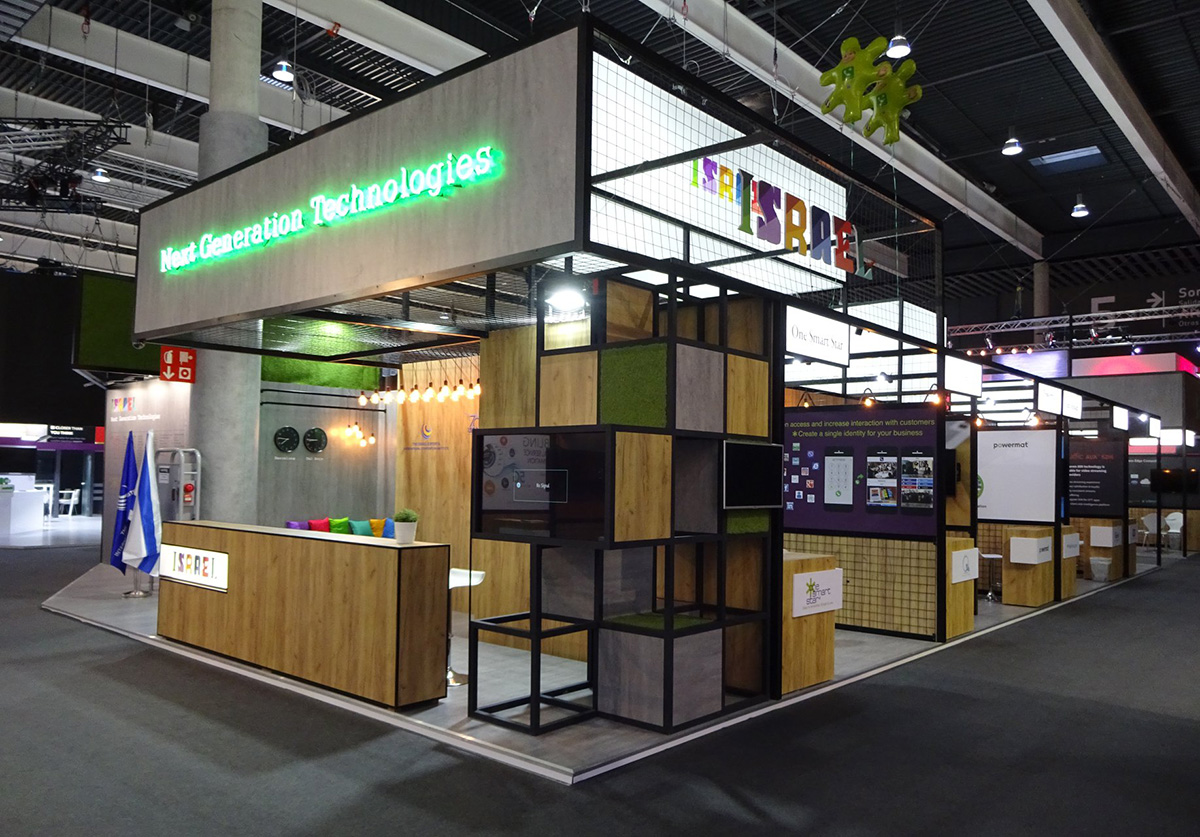 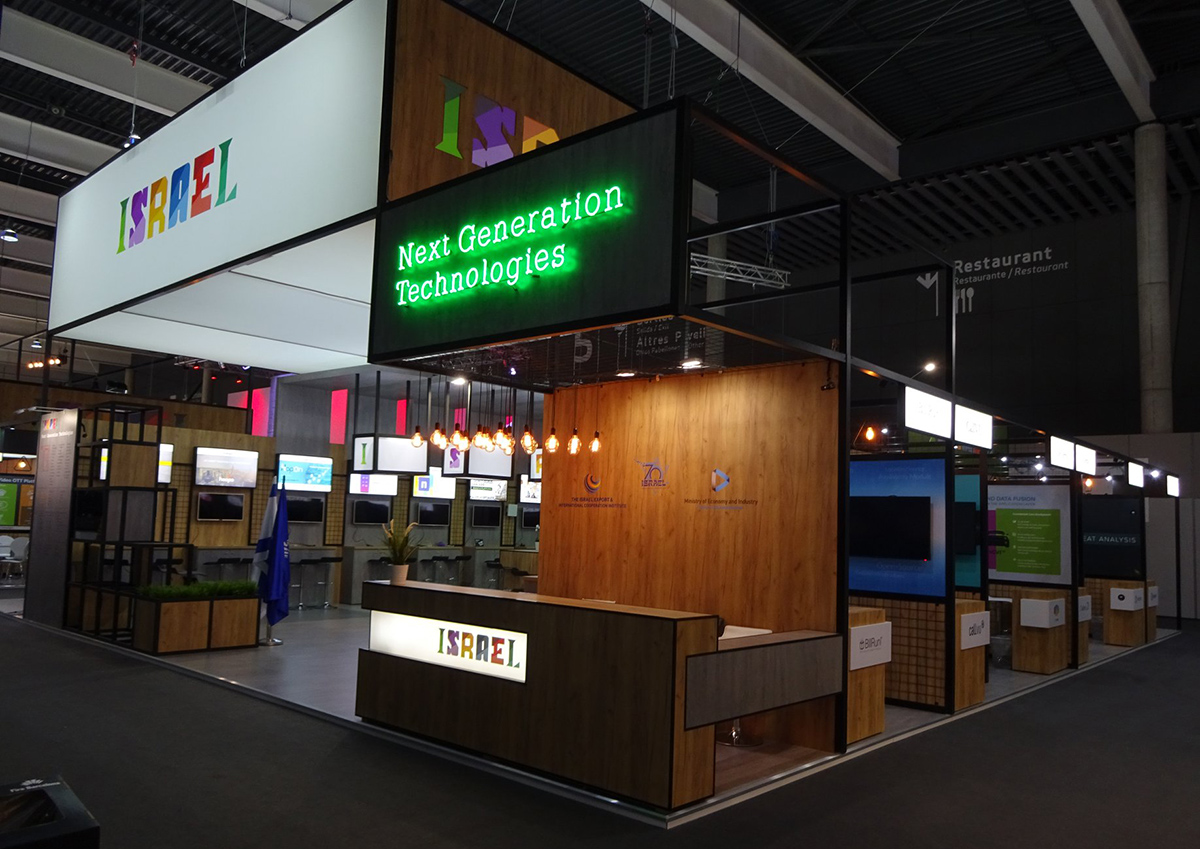 Israel also participated with its cube-inspired stand design by A.B.Z Exhibition Contractor. Contrary to the Taiwan booth, the Israel booth features cubes and hard edges emphasized by black frames. Wood laminate is also used on the furniture pieces and some parts of the wall to provide contrast and accent. 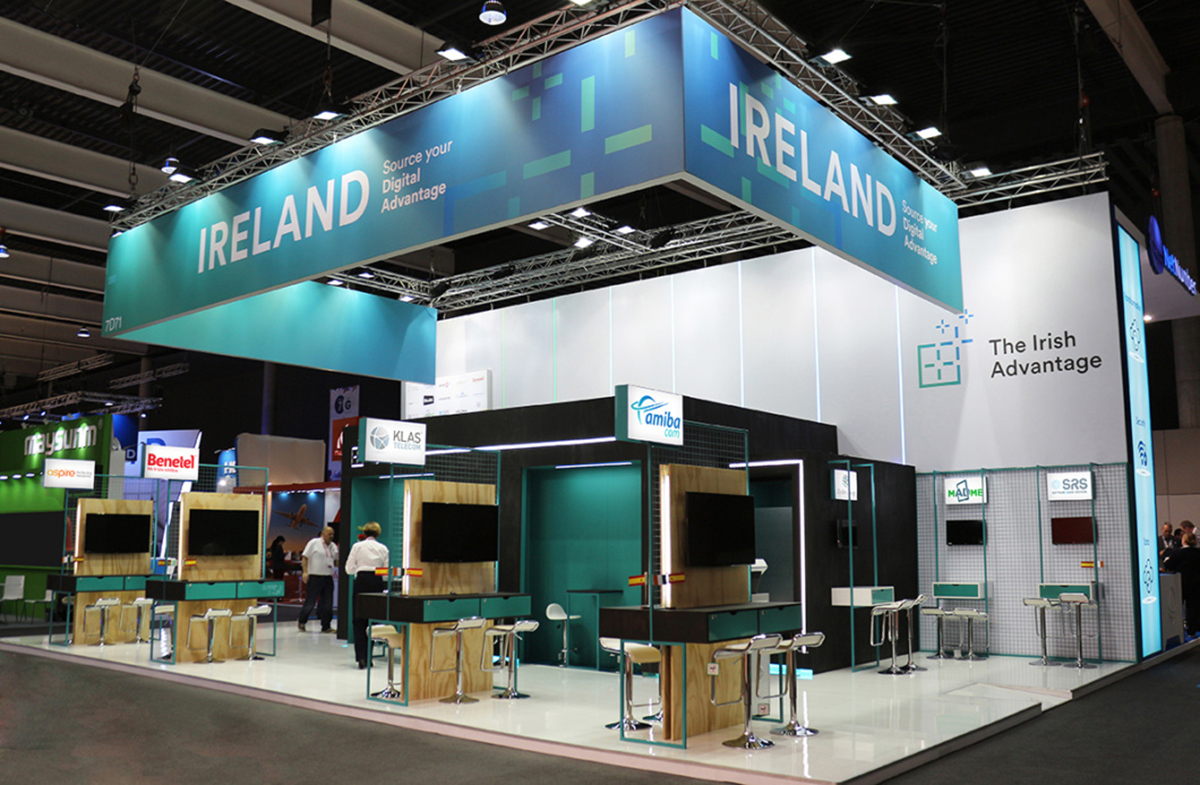 Ireland’s pavilion by Seek Design seem a little more simple and open featuring evenly-spaced demonstrations booths placed perpendicular to the platform with isles in between that create a feeling of openness. A huge backdrop wall is also installed at the rear part to frame the stand provide a visual frame. 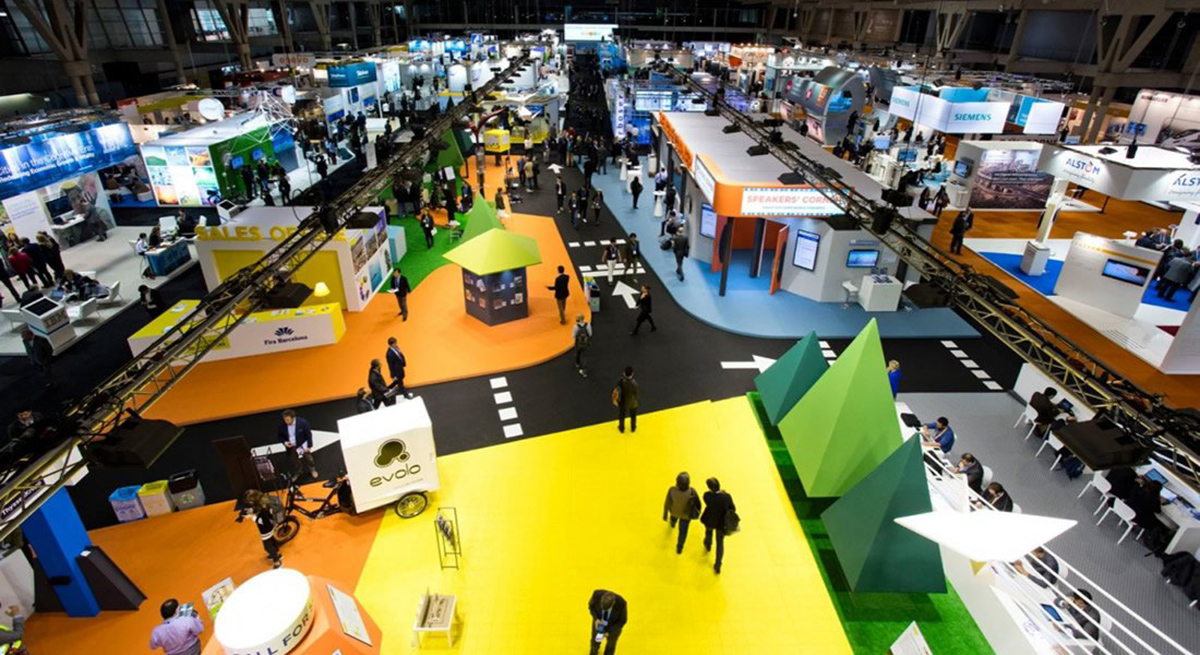 An aerial photo of the Smart City Congress 2018 showing the pavilions and hallways resembling a city. Image © Dronpixel

An aerial photo of the Smart City Congress 2018. Image © Nferia

The smart city expo is a converge of start-up tech, city planners, non-government organizations, designers and the public sector to share, learn and showcase technology that will make cities more sustainable and smart. Various stands with each respective design are assembled to aide each participant. Also, more importantly, common area structures and loose furniture contribute to setting the theme and feel of the congress as well as to delineate the common areas from the stands. Interesting floor patterns in various colors that resemble streets and pedestrians are placed as well as pyramidal stand-alone structures that resemble trees.

Apart from the more popular pop-up structures, public space art installations and exhibitions within the cultural and social realms, ephemeral architecture in the form of pavilions, stands and loose elements, finds a niche and establishes itself at the business front within congresses and conventions. In the age where mobility and exchange is easier, indeed change becomes more and more inevitable and temporary becomes the new permanent.