An Urban Case: Daniels Faculty of Architecture at the University of Toronto 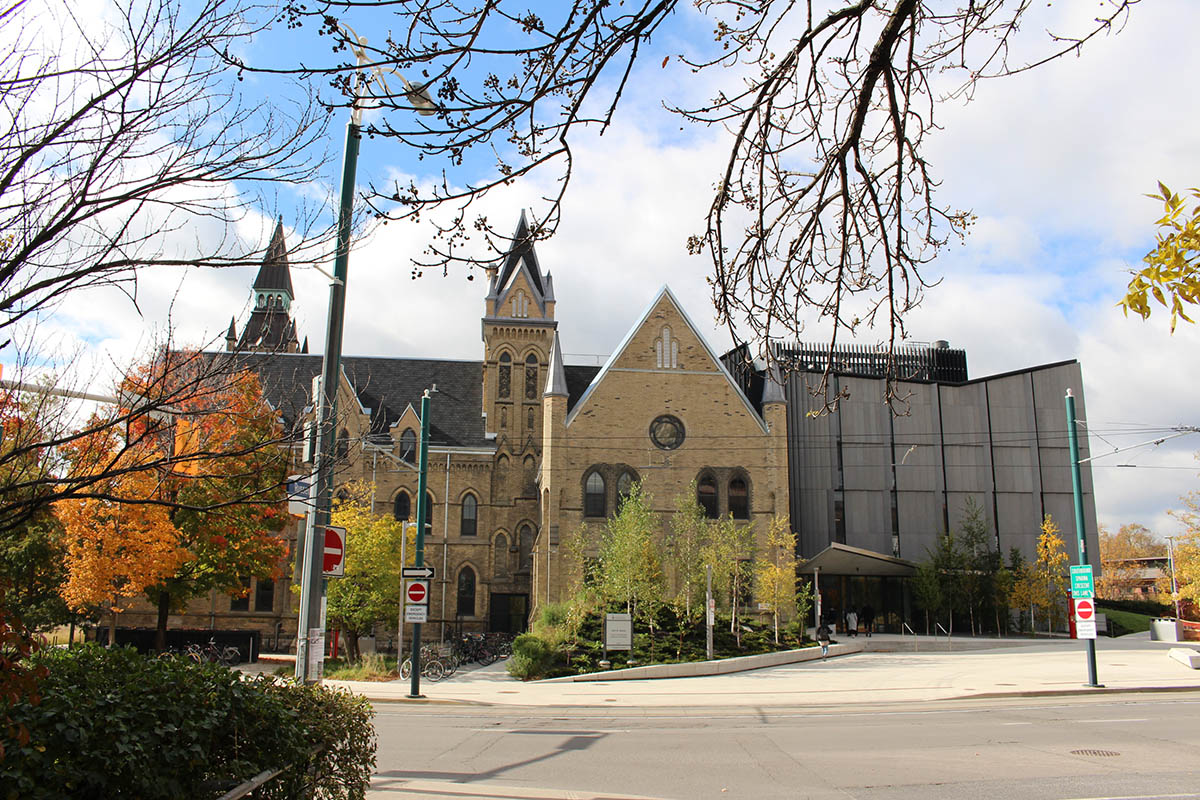 Architecture is a complicated process which is closely tied with issues related to the life and culture of a community. In the report on the status of architecture in Canada, there seems to be an important project which deserves attention on a larger scale. This significant project is the new Daniels Faculty of Architecture, Landscape, and Design at the University of Toronto (aka Daniels). It was completed in 2016 and has been used as the new building of the Faculty of Architecture. In Canada, there are thousands of building projects being erected every year, many of which are based in Toronto. Most of them are for housing, some are for public use and a few are of a memorable quality. The latter group includes buildings which are extraordinary and remarkable due to their exceptional functionality, design or approach.

In this introduction, I want to lay emphasis on the fact that it was very challenging to design a building for a faculty of architecture which is to produce architects since it must meet the expectations of architects around the city at the first level and those of students, instructors and professors on the second. On the one hand, the education of architecture must take place in a practical product of architecture i.e. the building of the faculty which made it an even more arduous task and on the other hand, the choice of the site of the building is of significance. This island-like site is situated next to a historical building which enshrines the marvellous architecture of the early 19th Century. Therefore, the project is an attempt to be considered as a renovation project in the vicinity of this historical building and be regarded as an urban element based on its location (in a square-like island).

The two parts of the building (the old one and the new one) must interact in a way in order to present a coherent space by preserving and respecting the values of the old architecture and at the same time to create hope for the future generations. This hope can buoy architecture students, artists and ordinary citizens of a city like Toronto that their city is multi-cultural and preserves and foster their historical values. This is not a slogan-like approach but it was a genuine issue that the architects faced it in practice and responded in this way.

In this report, I look at the project based on this framework. I will try to explicate the significance of the project for the urban future of Toronto and then address the questions accordingly. In conclusion, the design of the space in which students study architecture that is obliged by definition not to be indifferent to anything and must pay attention to all details was very demanding. In other words, it can be a turning point representative of the level of architecture in Toronto. With that being said, this is not philosophically right to have such an attitude. Architecture can be assessed in terms of engineering and art as well as part of urban space but what deserves more attention is that every subject matter at any level requires some kind of social responsibility which, if conducted well, can protect their role. This is a fundamental issue. Image courtesy of Daniels Faculty of Architecture, Landscape, and Design

Architecture, as a "Place" in the city

The building is situated in the center of a site which surrounds it like an island; therefore it does not have the urban space which can be used by students or others. There are only roads around the building so there is no pedestrian zone. As part of the University of Toronto, it is somewhat separated from the main campus. It is located right next to a historical building and based on its architectural design, it tries to be a coherent urban monument. When we look at the building in the vicinity of the historical building, we can find links between them in terms of height and vertical elements of the façade. It should be noted that its design does not provide an urban space for residents. It focuses on the functionality of the interior space. 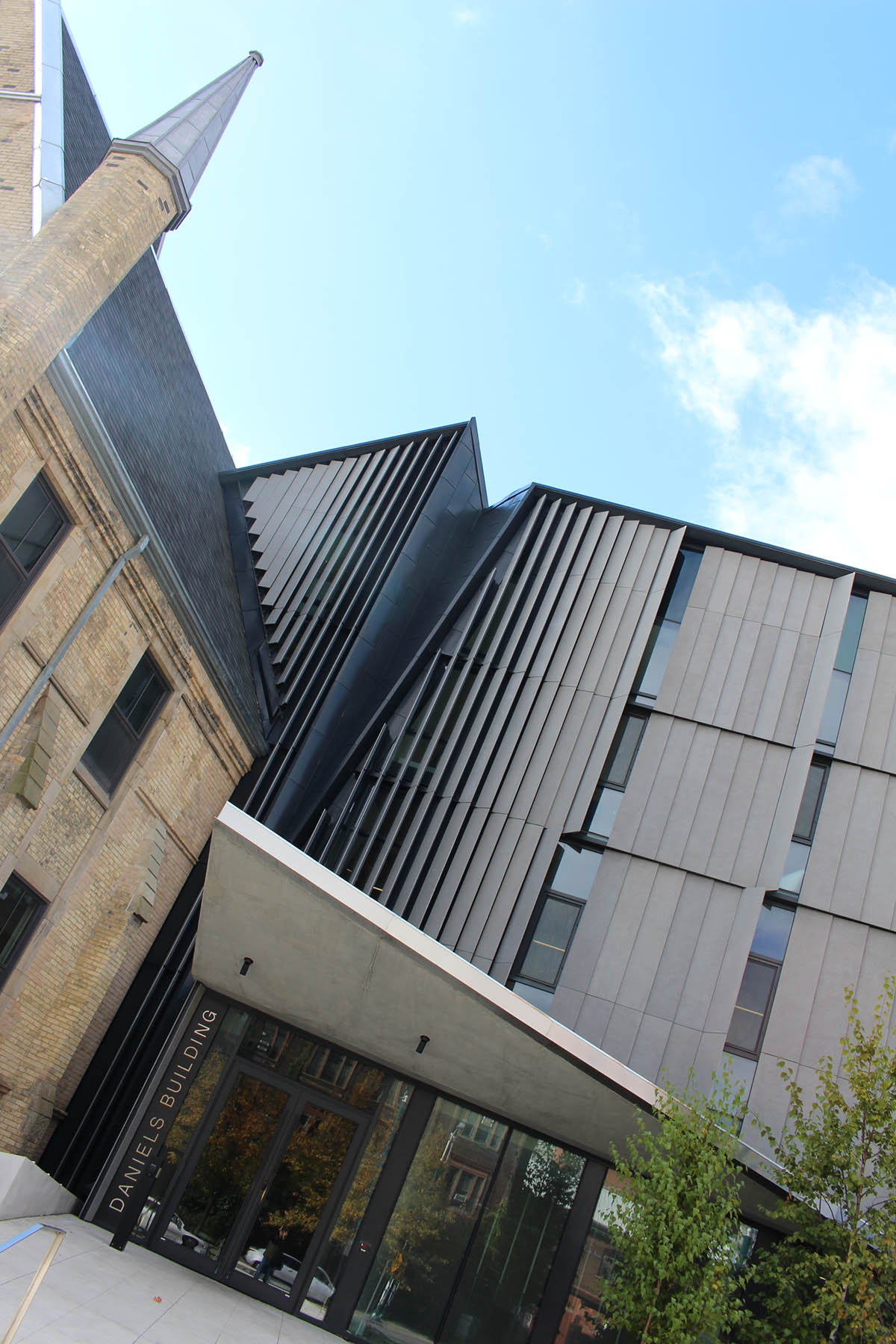 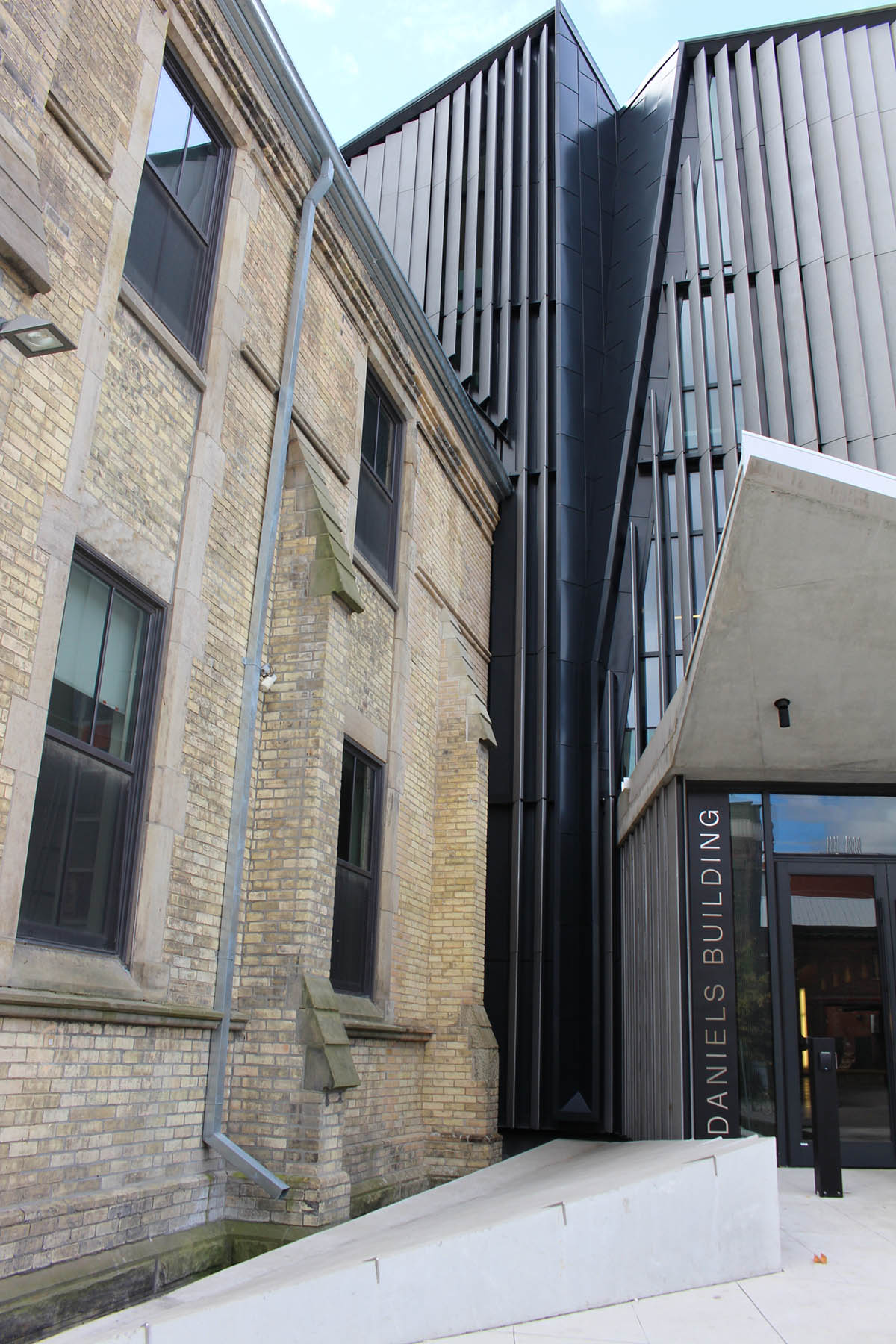 This type of architecture respects the old architecture but does not seem to be too friendly. Even though it does not damage the historical building in any way, it does not also take advantage of this vicinity or take the chance to present itself in a special manner. 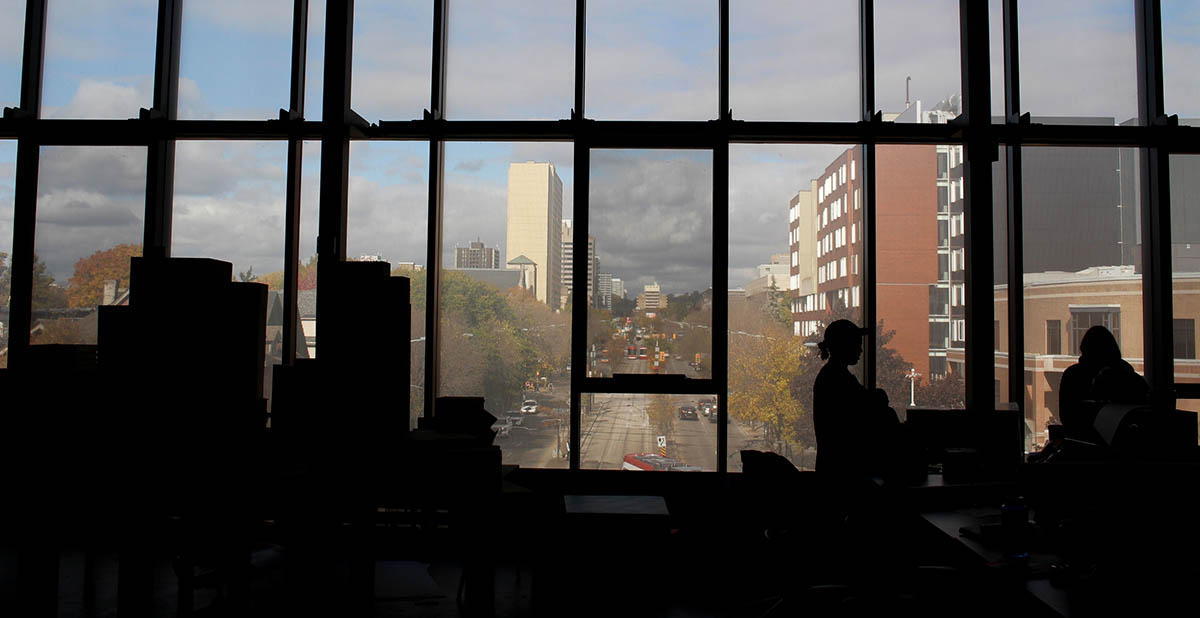 The relationship between the city and architecture

There is a two-way relationship between the city and architecture and it is at the level of the image. The frame of the street can be seen from inside the building as if it is a poster and glass-made façade of the back side of the building reflects the street. Based on its geometric harmony with the historical building, it creates proportional scenery. This minimalism helps establish peace and harmony in the surroundings and makes the building accepted in the context. With that being said, this building as a progressive project could have the responsibility of presenting architecture as a discipline which could improve the quality of the environment, but it didn’t.

The contextual values include the historical building, some other old buildings across the street and the area of the University of Toronto. All of these have had some impacts on architecture but not to a big extent. Considering Toronto is a green city with a lot of various trees, but some parts of the building do not respect this aspect of nature and scenery. Some other parts do observe this consideration though. 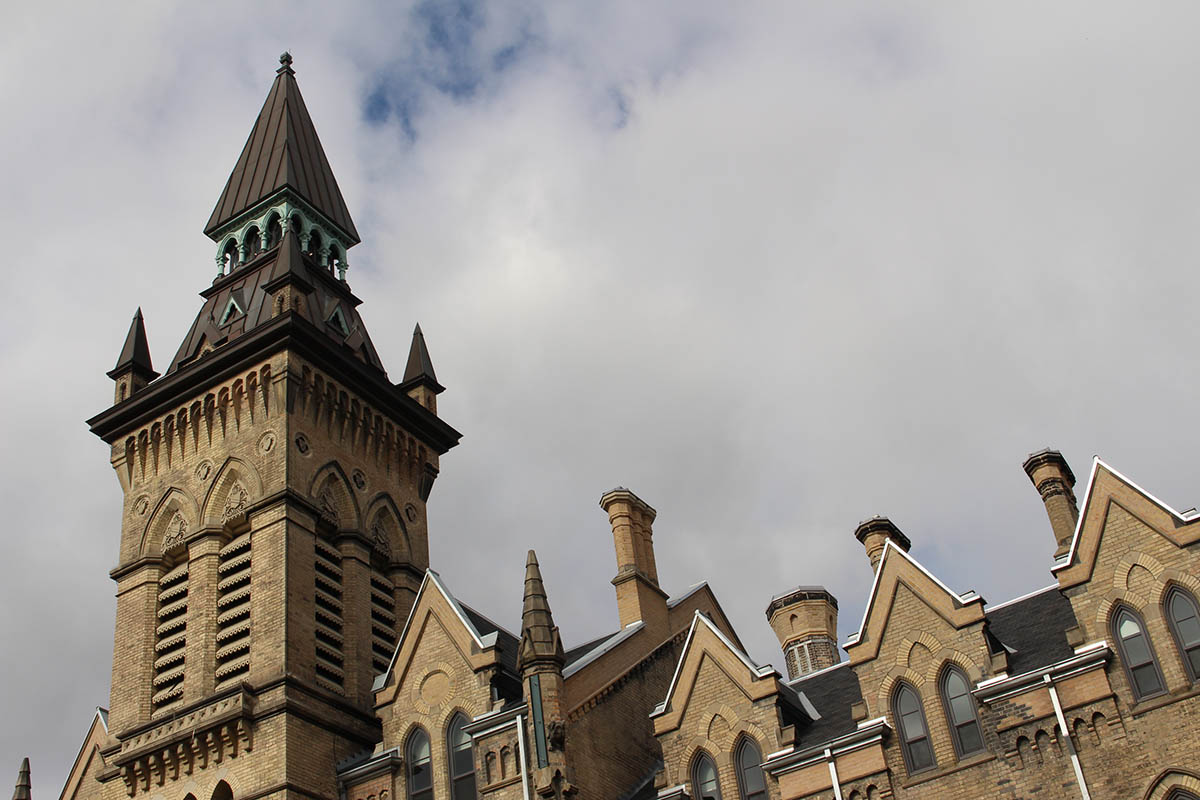 The details of its architecture are normally background-oriented and compatible with the conditions of the neighbouring building. It tries to reflect some depth with seriousness by avoiding any unnecessary decorative elements. This enhances the impact of space on its users. It has been a successful architecture in this regard. This approach can be also applicable to other parts of the city. 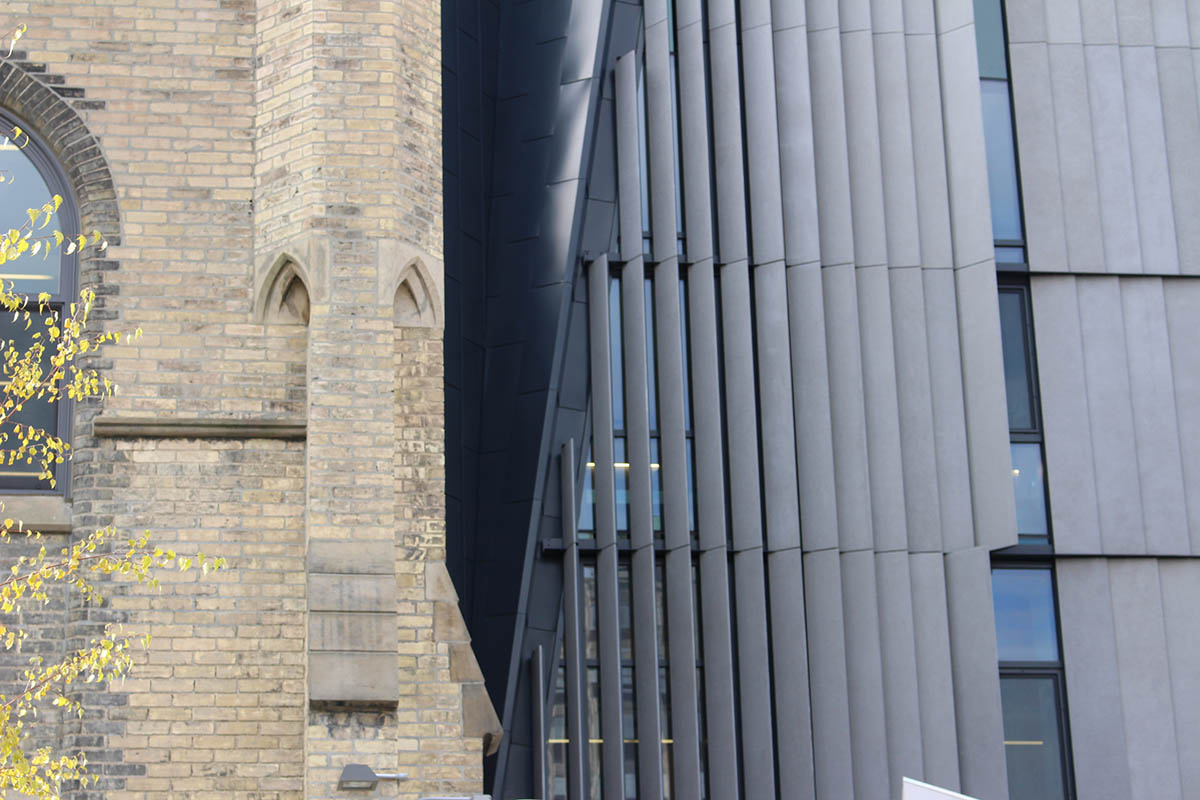 Architect’s interest in industrial architecture is a correct attitude and personal architectural behaviour which can pave the way for the application of high technology. Even though this building does not introduce any special technology of architecture, it represents itself as a green energy building and a good model for sustainable development in the building. 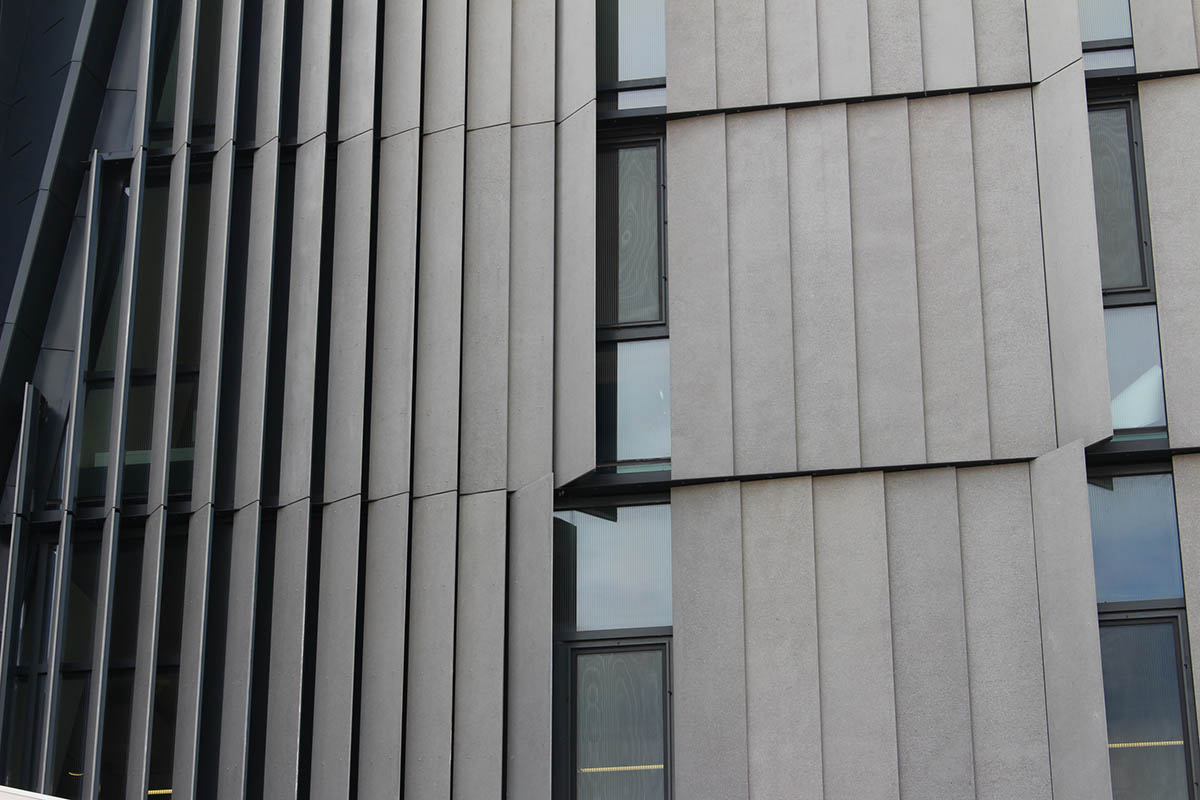 The building respects the functional structures, easiness of visits, comfortable circulation and easy accessibility. Also, the placement of the amphitheatre next to the smaller amphitheatre which also functions as a stair set is an architectural attraction and can be regarded as a creative good type of architecture. 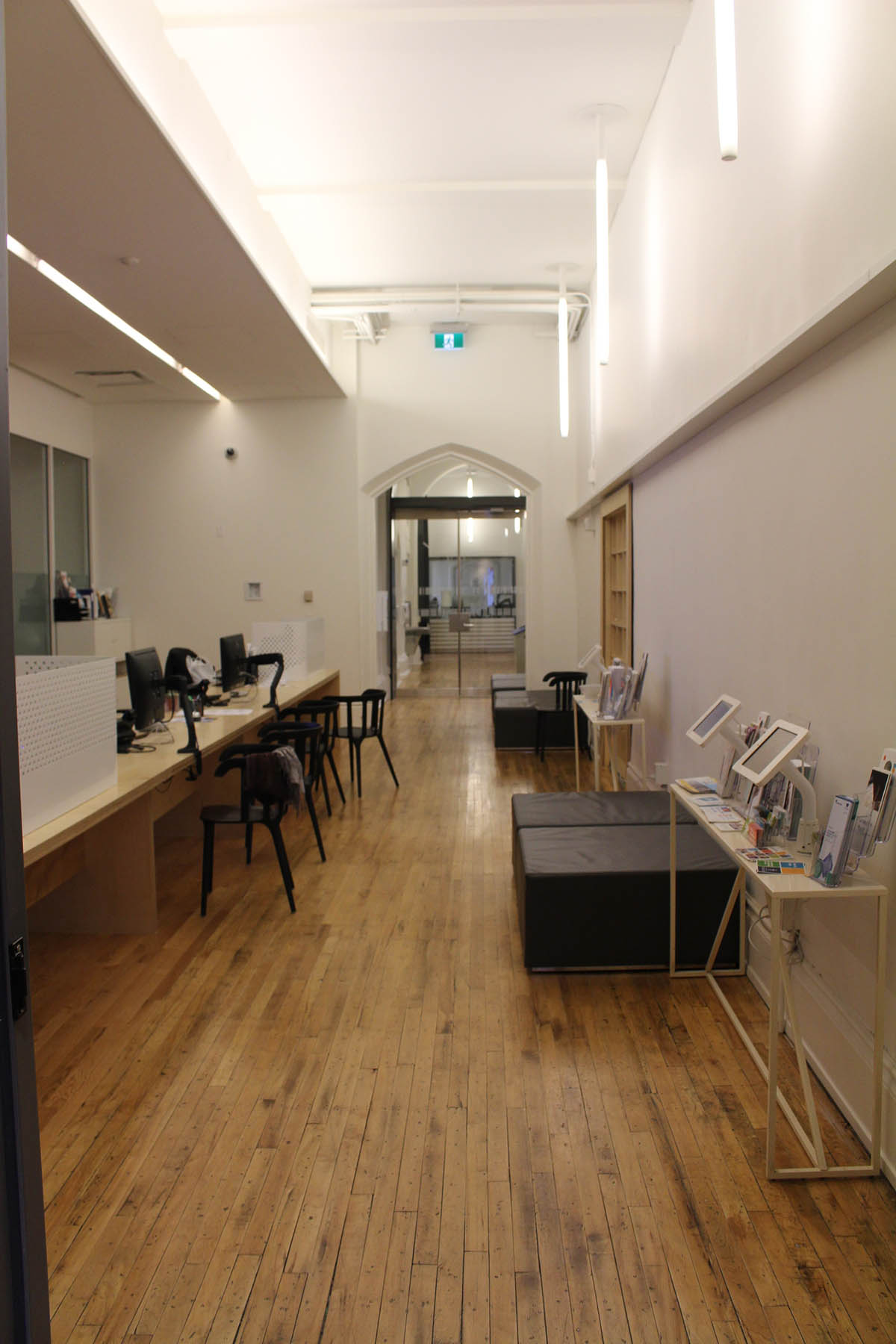 The ceilings of ateliers have simple and white patterns with a slope which reinforces the sense of strength and stability in its users. It is worth noting that a non-decorative approach has been adopted to interior spaces including its architecture, shapes and geometries. It is a notable capacity for its users. 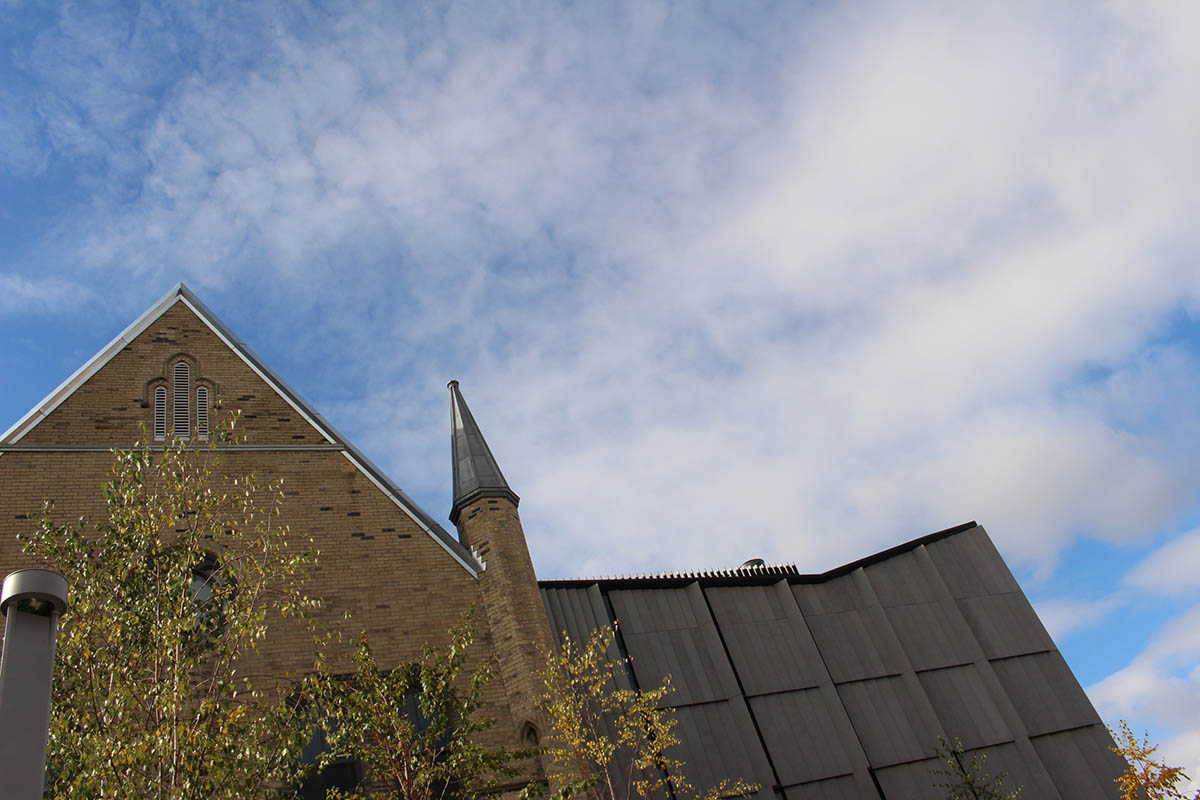 A building as an architectural statement

It can be argued that this building has managed to form logical vicinity as a successful model of renovation and has not weakened the possibility of benefiting from being placed next to a historical building by avoiding the exaggerated and extreme use of forms. Yet, an open and critical attitude to this architecture can reveal that it is still far from an educational center for architecture. A courageous and thoughtful approach can shed light on the fact that architecture still has a long way to grow and discover new domains. Considering the availability of resources, this architecture has been able to produce spatial values based on a parsimonious approach and elegant lack of lust for forms.

All images © Reza Pourvaziry, except the second image.