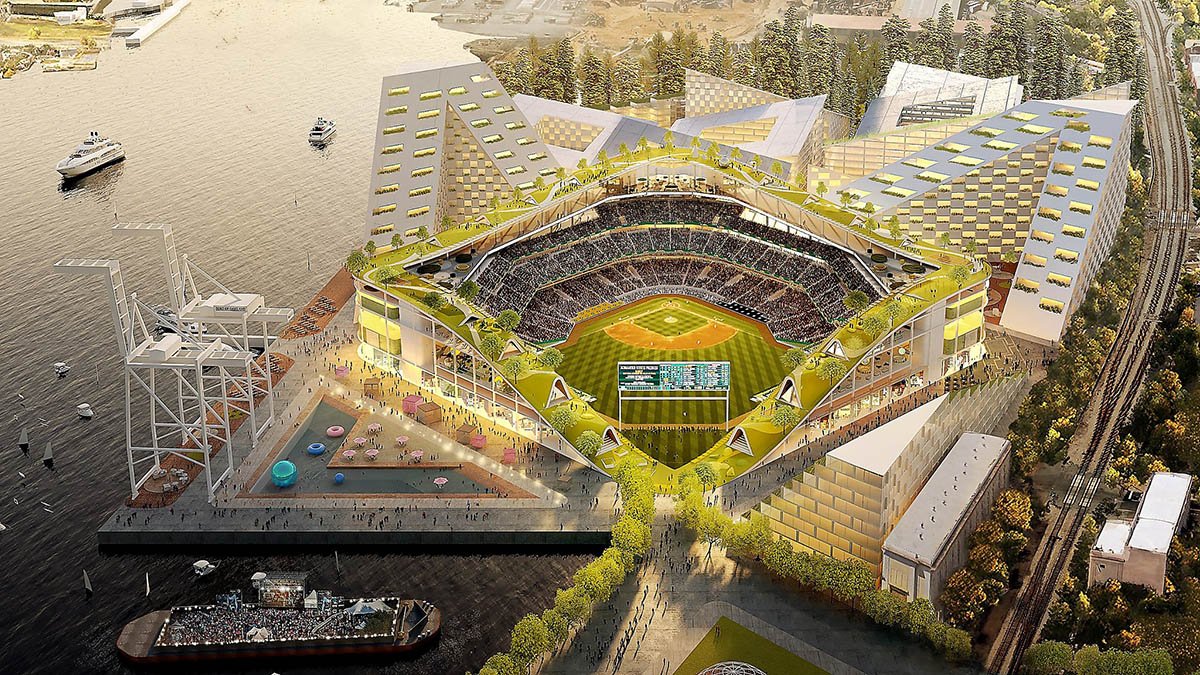 Bjarke Ingels' firm BIG-Bjarke Ingels Group has released design for a new Ballpark at Howard Terminal of Oakland, California. The new plans released by the Oakland Athletics will also pursue a second project to redevelop the Coliseum site. The two-project approach will create significant economic and community benefits for West and East Oakland, according to a press release.

BIG and the Oakland Athletics have released plans after a yearlong technical analysis and community engagement process, the new plans will be developed in collaboration with local architect Gensler and landscape experts Field Operations. BIG's design scheme will also include a green rooftop park that can be walked, sit and allow other activities on it by overlooking the city. 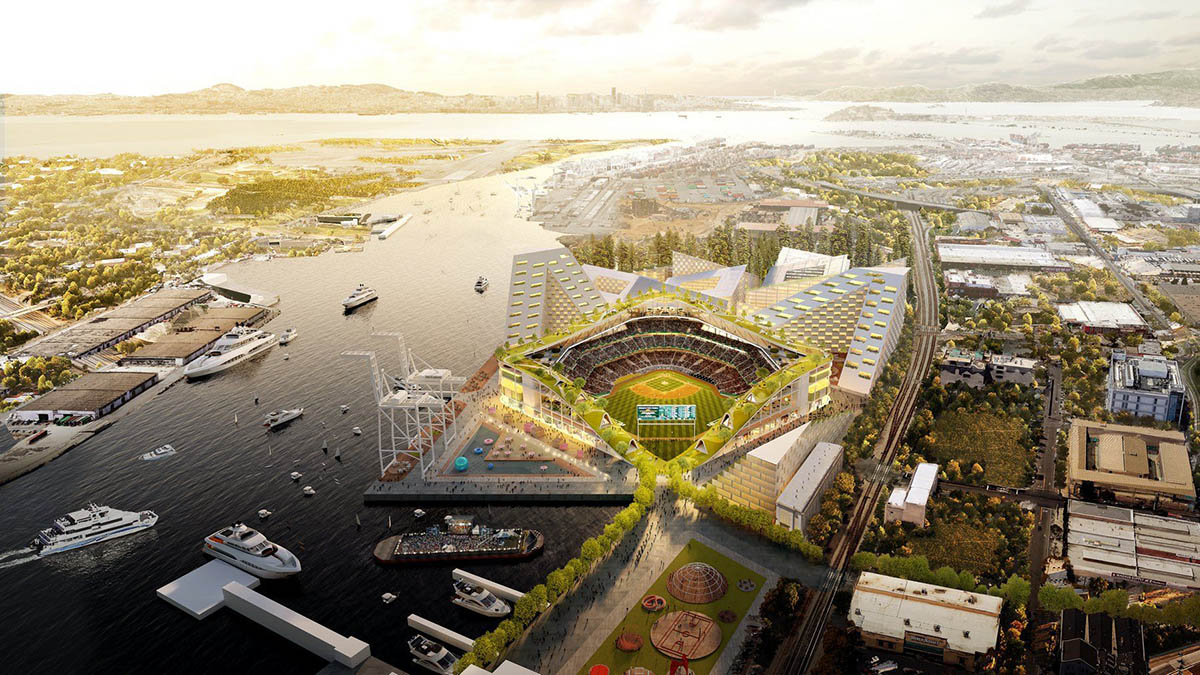 The new ballpark at the Port of Oakland’s Howard Terminal site will offer the most intimate baseball experience in the world with views to the city and water, as well as new civic, educational, cultural and recreational amenities for the local community. The mix program of the project will include a new baseball park, housing, recreational areas, and a business campus in the city. 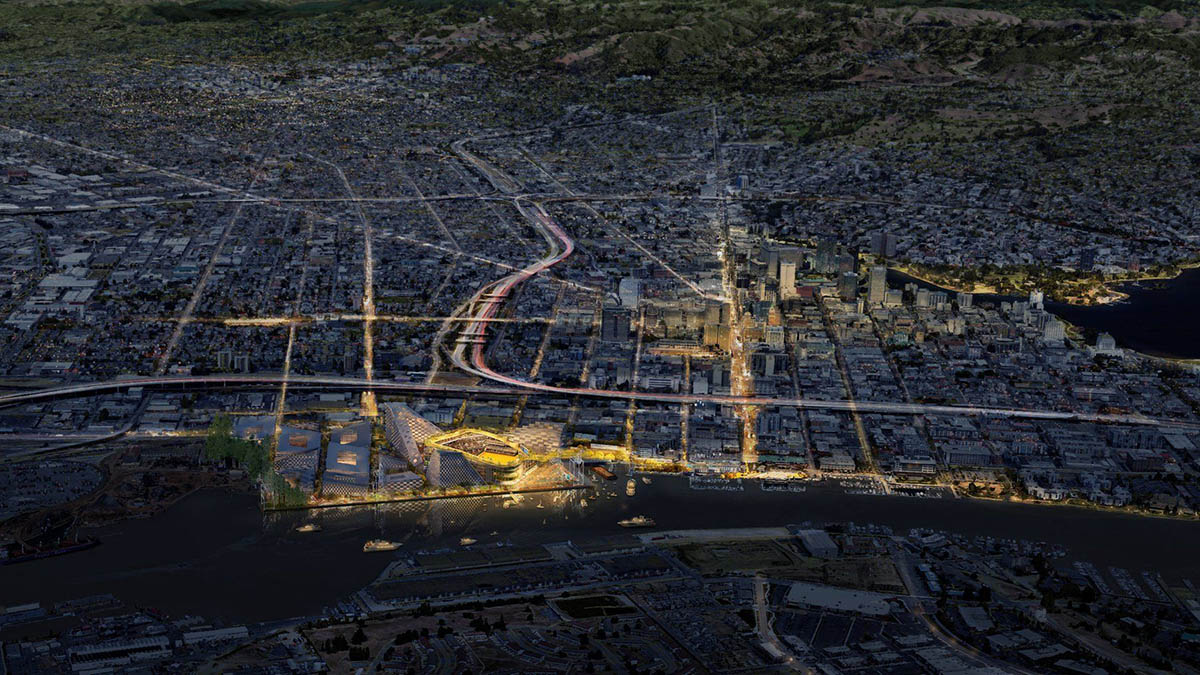 The site of the former ballpark at the Coliseum will adopt a new identity by absorbing the character of the neighborhoods around it, while the field will remain as a focal point honoring Oakland’s sports history. The former parking lot becomes a central park, containing a ballfield amphitheater, event spaces, and restored wetlands to be enjoyed by all Oaklanders. 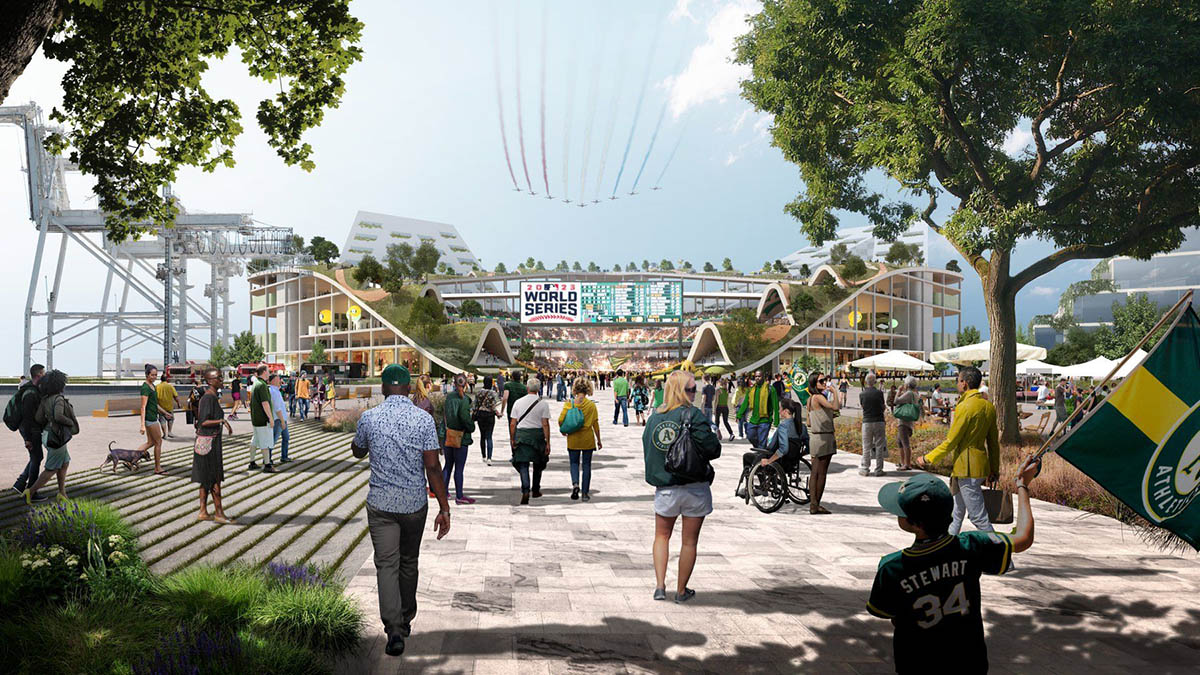 "Our design for the A’s new home at the heart of Oaklands revitalized waterfront seeks to return the game to its roots as the natural meeting place for the local community. An elevated treelined promenade frames the ballpark on all sides, dipping down to meet the public square and open the field to the water and city views," said Bjarke Ingels, Founding Partner, BIG.

"The perimeter park connects a cascade of social spaces for the fans to enjoy the sport on gamedays and extends the urban fabric with a neighborhood park to be enjoyed all 365 days a year. In other words – we are bringing the ‘park’ back in ‘ballpark," Ingels added. 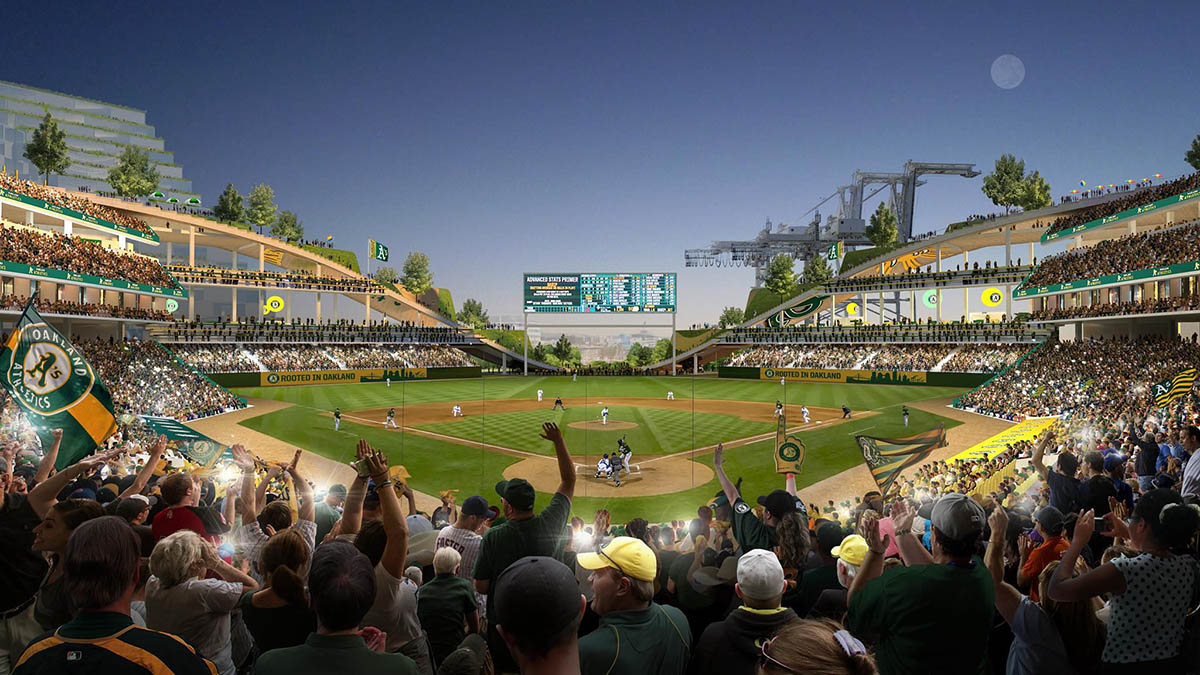 Described as a "ballpark within a park," BIG's proposal for the intimate stadium is nestled carefully into its urban surroundings. To create the most intimate experience in baseball, BIG's design scheme will serve for a total capacity of around 34,000-including fixed seats and general admission experience areas-to be arranged in the closest configuration possible to home plate, along with an elevated park that wraps and frames the bowl, coming down to meet the waterfront. 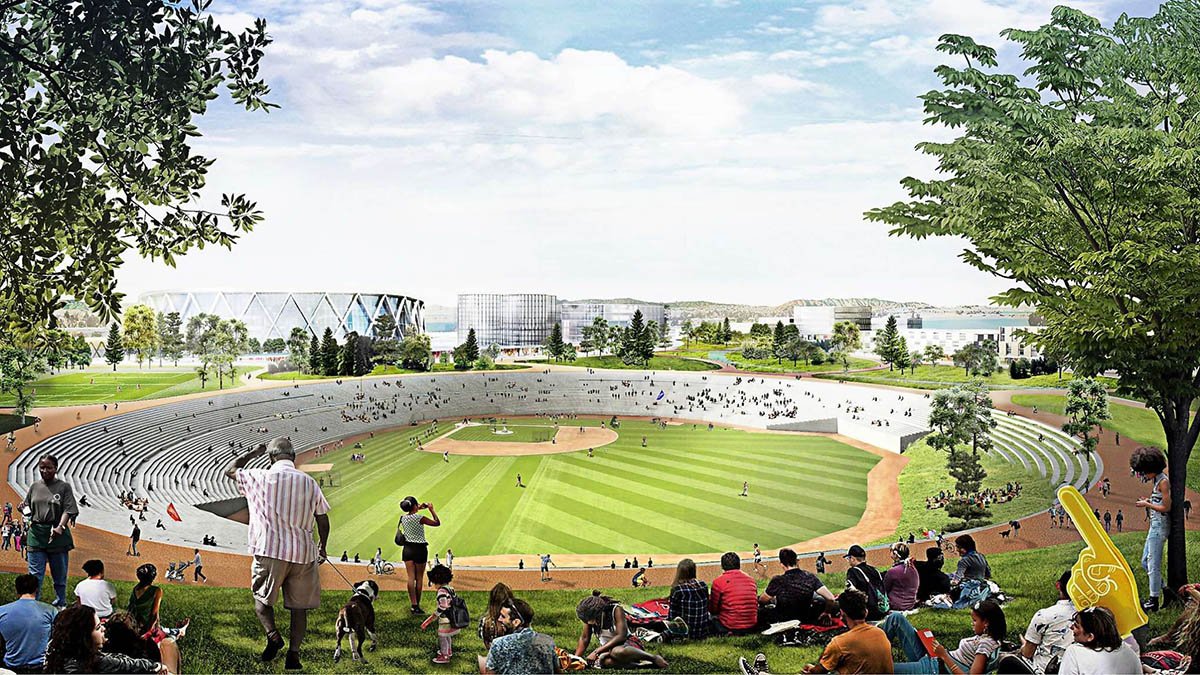 The square block of the ballpark district will sit neatly within the extended urban fabric of Oakland, transforming the ballpark's concourses into street, and concessions into restaurants.

Diverse programming embedded within and around the ballpark will ensure the ballpark, and the park that sits atop it, are active on game days and non-game days alike. 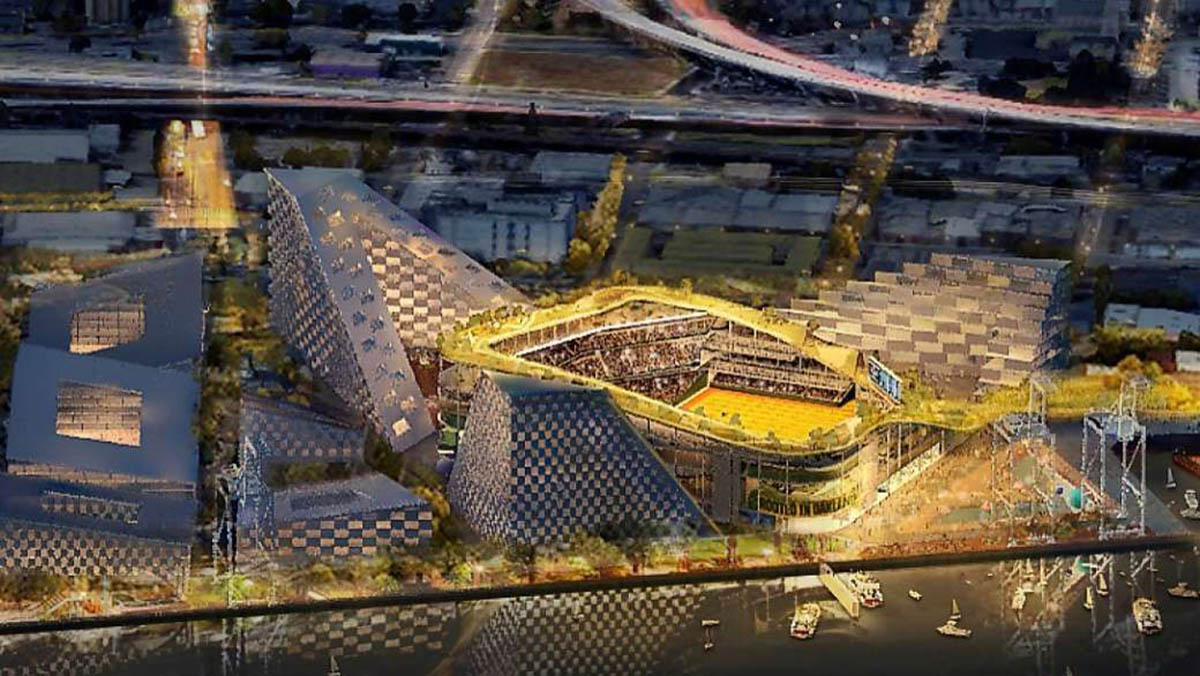 At the Coliseum site, the A's seek to transform the current site in ways that will address several specific community needs and opportunities expressed by East Oakland residents. Working with public agencies and community residents, the A's plan to revitalize the Coliseum by pulling the adjacent neighborhood fabric into the site, and creating new economic, cultural, and recreational opportunities. 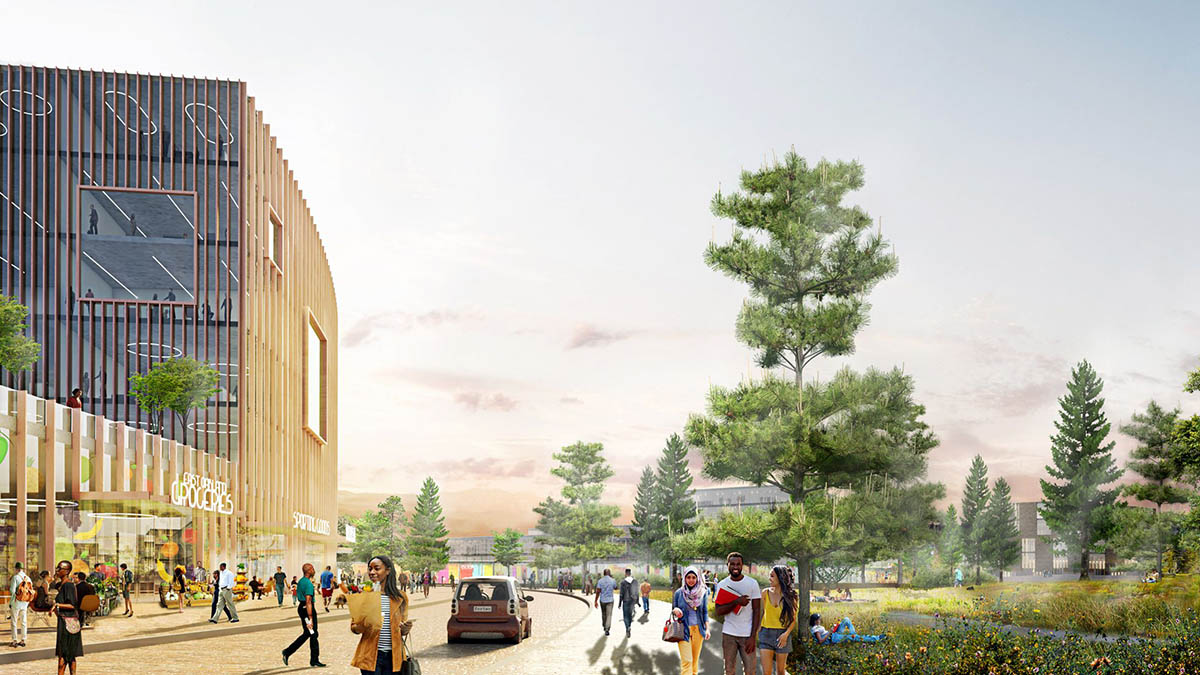 The new park will be anchored by the two focal points of Oakland sports history: Oracle Arena, repurposed as a concert and cultural events center; and the original Coliseum baseball diamond, preserved to inspire the next generation of ballplayers. 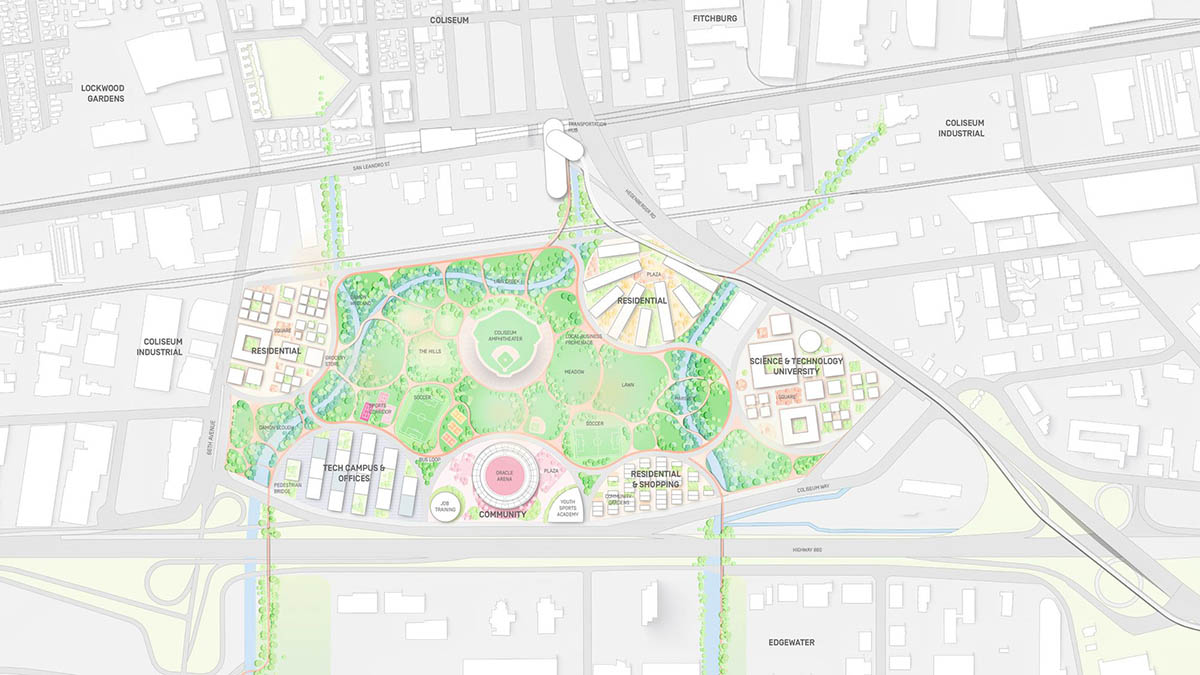 As a next step in this process, the A's will embark on a "120-Day Action Plan" focused on five key items: (1) gathering additional community feedback; (2) beginning the environmental review process at Howard Terminal; (3) negotiating an agreement with the Port of Oakland; (4) developing a framework with public officials for the Coliseum redevelopment; and (5) developing a framework for an economic and community benefits agreement. 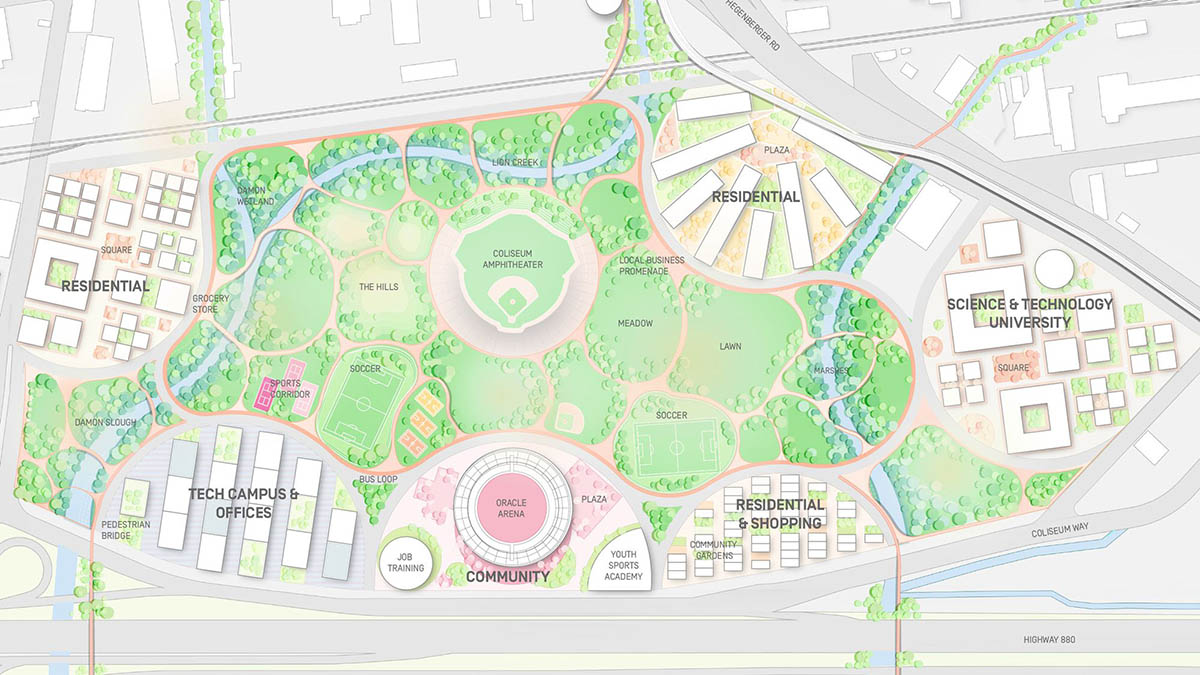