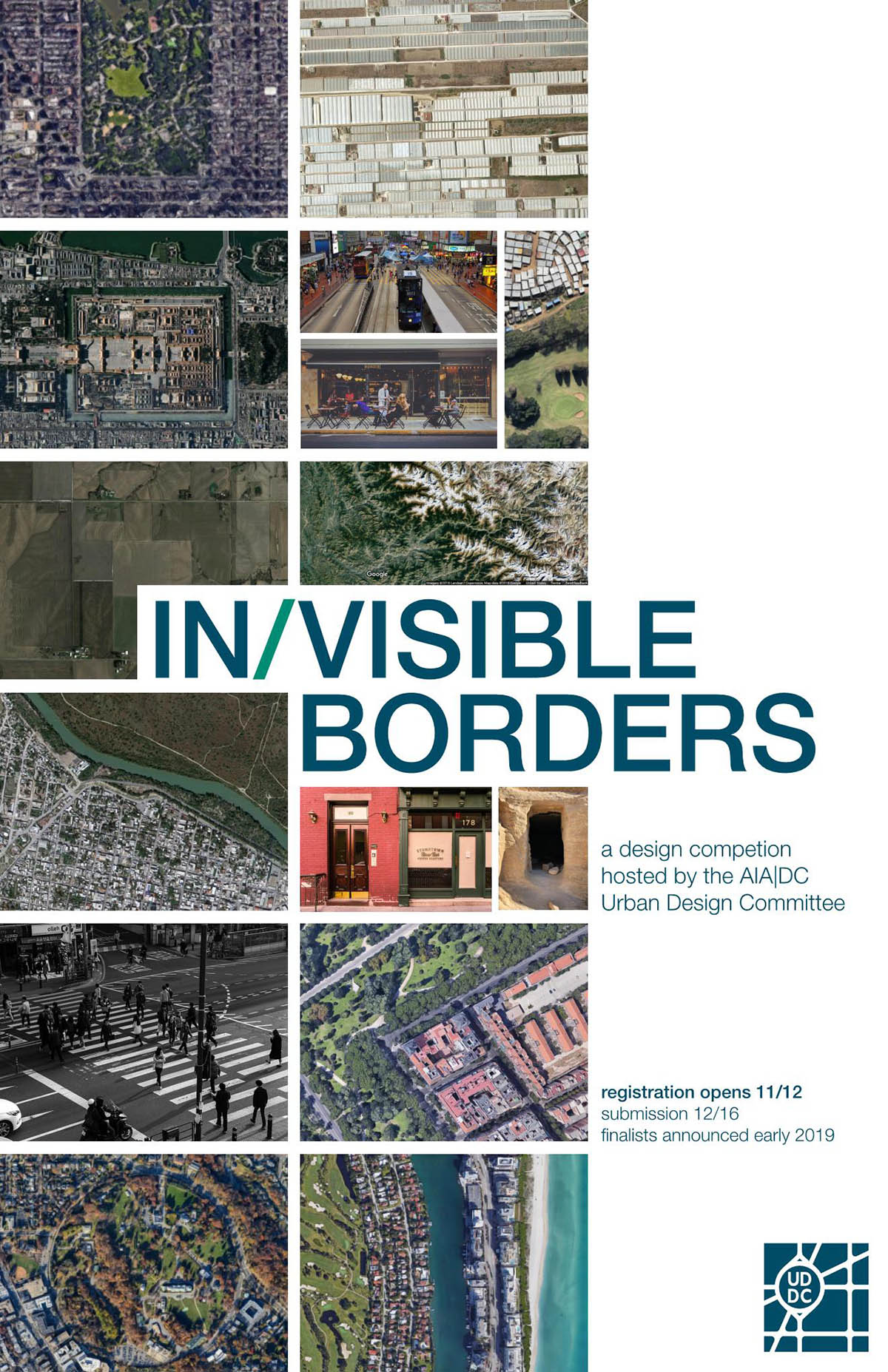 “Cities should be built and evolve for the people that live within them, but who the people are is often debated, forgotten, or misunderstood.”

This year, the AIA|DC Urban Design Committee has sought a better understanding how architecture and urban design contribute to spatial equity within cities. In lieu of their theme for the Year: Spatial Equity, the committee announces the launch of their annual design competition: In/Visible Borders.

The competition invites participants to reflect on the nature of thresholds, boundaries and borders at every scale, from the street edge to the geopolitical, from the manifest to the unstated. Consider how they are alternately devices for identity and belonging or exclusion and inequity. Participants have to propose a design solution that enhances spatial equity along the border of their choosing.

Spatial equity strives to give equal opportunity to the community inhabiting the space. The collaboration between the designer and developer aims to be inclusive of the community ethos and aspiration, creating a culture of place that measures human values. Thus, this competition strives to elicit new ideas for the places in which we, the people, live and how we can continue to achieve more spatial equity.

Thresholds, boundaries, and borders define the edges of our everyday life. Borders of all scales, visible and invisible, establish relationships between the built environment and surrounding communities. Borders influence how we identify ourselves, relate to others, utilize available resources, and form communities. They are the physical and symbolic embodiment of our choices and are an indicator of how equity is distributed. These borders can clarify and define spaces and relationships — making the world around us easier to navigate and understand.

Borders also have the ability to restrict the sharing of resources. This typically results in the detriment of one party and perpetuates further inequity. These inequities are manifested in different scales, such as slums, public housing, refugee camps, and war zones. They also can translate into infrastructural systems affecting mobility and education. The lack of access to green spaces, food deserts, empty buildings, vacant lots, and congested streets are just a few of the physical manifestations of inequity.

Borders, according to Jane Jacobs, “exert an influence (sucking) the life out of our cities and its neighborhoods. Not just literal walls and barriers, many features of urban life — from roads to parks to buildings — can cut off activities in public spaces and create what's called a border vacuum.” In contrast, Kevin Lynch argues that boundaries can fuse communities together: “an edge may be more than simply a dominant barrier if some visual or motion penetration is allowed through it — if it is […] structured to some depth with the regions on either side. It then becomes a seam rather than a barrier, a line of exchange along which two areas are sewn together.” If borders are instead viewed as a means of stitching disparate entities together or facilitating connections and transactions, they have the potential to be flexible, permeable, and inclusive.

In 1995 seven European countries opened their borders to each other for their citizens to cross without IDs. This group, known as the Schengen Zone, was later joined by 19 countries, the dissolution of these state borders brought a large part of Europe together. It resulted in easier cross-border commutes to work, the ability to shop in other countries, and vacations unencumbered by tedious passport hassles. However, the recent refugee crisis and rise of nationalistic parties have led to some border controls being re-established. The Schengen Zone is being questioned and the future of European borders is unclear. There are numerous countries that are re-evaluating their own positions with regard to trade, immigration, and refugees.

In addition to the state/county, and other jurisdictional lines that divide a nation, there are border conditions that are translated through the complex networks of infrastructural systems, transportation networks, agricultural production, labor forces/unions, telecommunications, energy production, and more. Behind these industries lie numerous organizing institutes and stakeholders. These complex networks often suffer in their efficiency due to political borders, and are critical for the existence of an autonomous state. Is it possible to reimagine how borders impact autonomy? At the neighborhood level we often come across edges that restrict movement, manifested either in physical signs or integrated within us through socio-cultural systems. The relationship between buildings, streets/buildings, plaza/street/buildings, offers spaces for opportunity that redefines the segregation to integration. Cohesion and collectivism can transform the points of conflicts to points of growth.

You are asked to propose design solutions to enhance spatial equity along a border(s). A successful proposal should seek to demonstrate the relationship between multiple scales that are formed by border conditions: the resultant urban conditions of this systematic relationships, the individuals who are impacted by this urban condition, and the stakeholders who may manage or influence how these systems operate.

If you have any questions about the eligibility requirements, please contact the AIA|DC UDC at [email protected]

AIA|DC UDC shall have the sole authority to verify that eligibility requirements have been met.

The jury shall have the sole authority to determine awards. The jury’s decisions shall be final and not subject to review. All entries will be anonymous up to the final selection. Finalists will be selected in a two-tiered process. In the first judging round, the jury will select top candidates for final awards. Of these submissions, the winner and honorable mentions will be decided.

The finalists will be invited to author a brief article in UDDC’s annual publication about their submission and will receive a printed copy of the journal. See last years journal here.

The winner will receive $750 and free registration to the next AIA|DC Urban Design Competition, in addition to the opportunity to author an article in this journal and receive a printed copy.

Please note that all fees are non-refundable.

Teams of up to five persons may submit under one admission fee.

The jury’s selection will permanent and final. An impartial member of the AIA|DC Committee will serve as a moderator for the jury and provide written documentation of the jury’s selection. The jury will certify the accuracy and completeness of the documentation before the winners are announced publicly. Scoring rubrics and notes made by jury members during the jury’s closed session(s) will not be available to the public or participants. The Jury reserves the right to award winners, but is not required to do so if the entries submitted do not meet the objectives of the competition as stated in the brief.