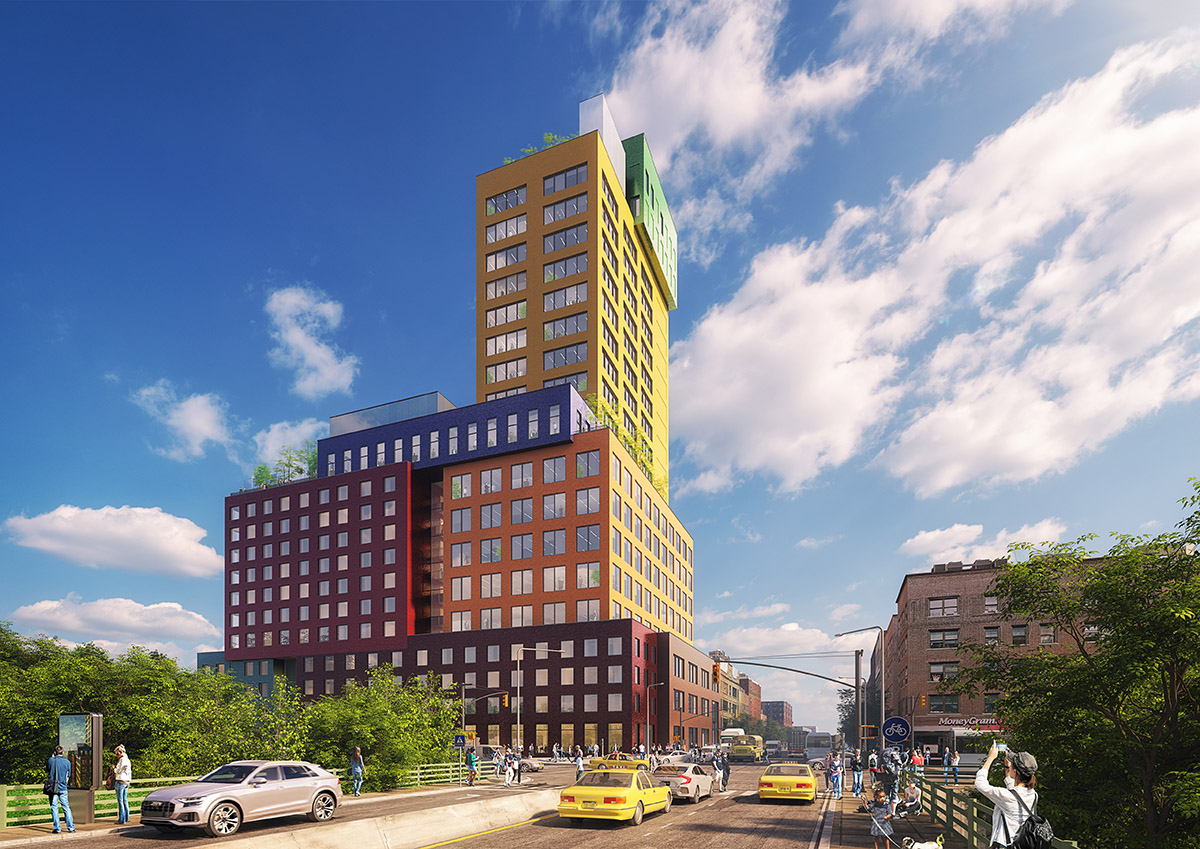 MVRDV has unveiled design for its first US project composed of colorful stack of boxes that reflect the vivacious character of the neighbourhood and set a direction for the future development of the area.

Covering a total of 21,800-square-metre area, the mixed-use project will combine hotel, retail, and office functions in vibrantly stacked blocks and will be the first project of MVRDV realized in the US.

Described as "vertical village", the project is designed according to the strong character of the context. The distinctive massing of the building resolves the project’s main challenge: accommodating a large volume of program while remaining contextual. 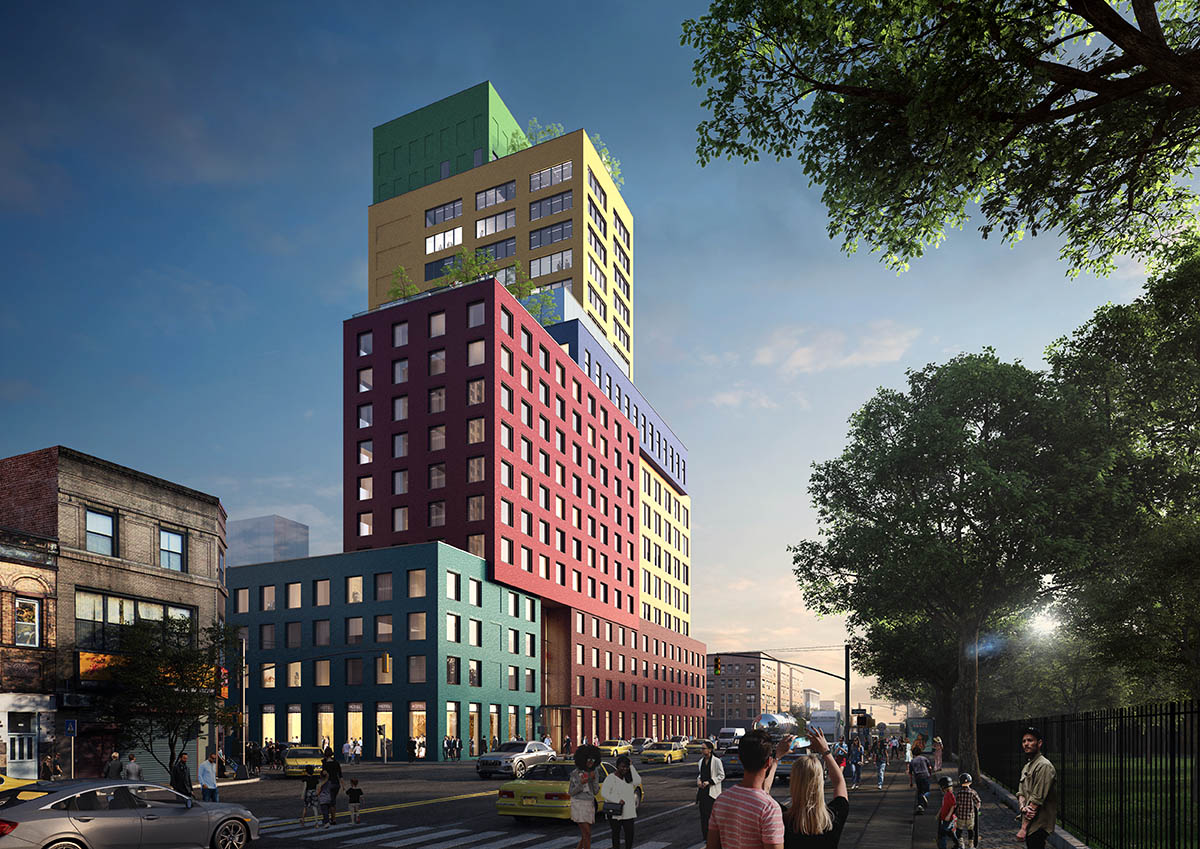 Designed for developer Youngwoo & Associates, Radio Tower & Hotel will occupy a currently underutilised lot at a crucial intersection: where Amsterdam Avenue meets the Washington Bridge, which connects Manhattan to the Bronx; and just one block away from the I-95 highway, one of the major links between Manhattan and New Jersey.

"Radio Tower & Hotel takes the typical composition of a small block in Washington Heights, pulls it apart and then reassembles it into an asymmetrical stack of boxes with openings and roof terraces," said MVRDV. 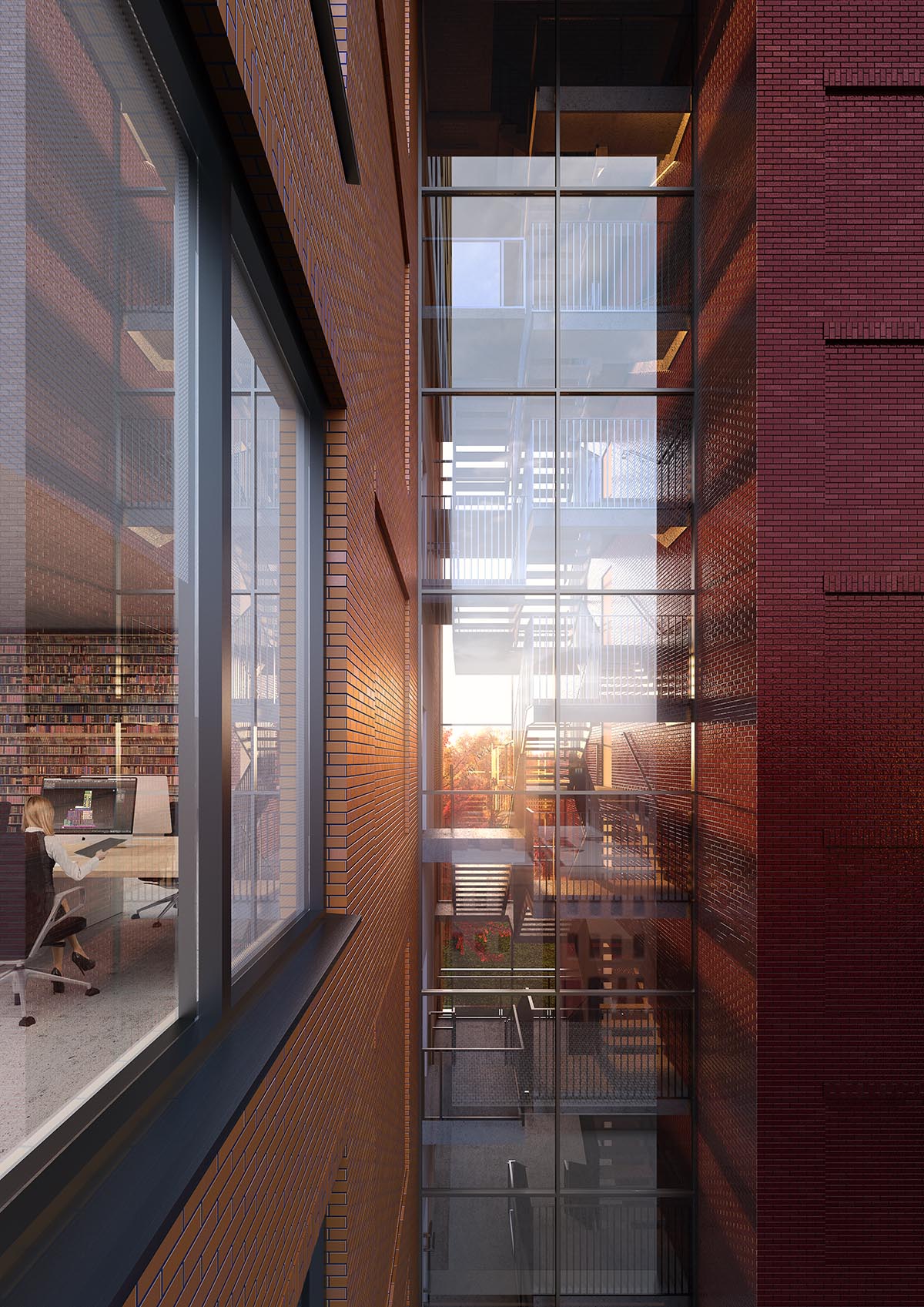 View from the interior space

Each volume is designed to appear like separate buildings: each is roughly the same size as others in the neighbourhood and features its own specific window pattern inspired by the nearby buildings.

The boxes take cues from the vibrant colours of the shopfronts in the majority-Hispanic neighbourhood, with each part of the building being finished in a different colour of ceramic bricks. Combined, the elements of the building’s external appearance form a condensation of the characteristics of Washington Heights’ existing urban fabric. 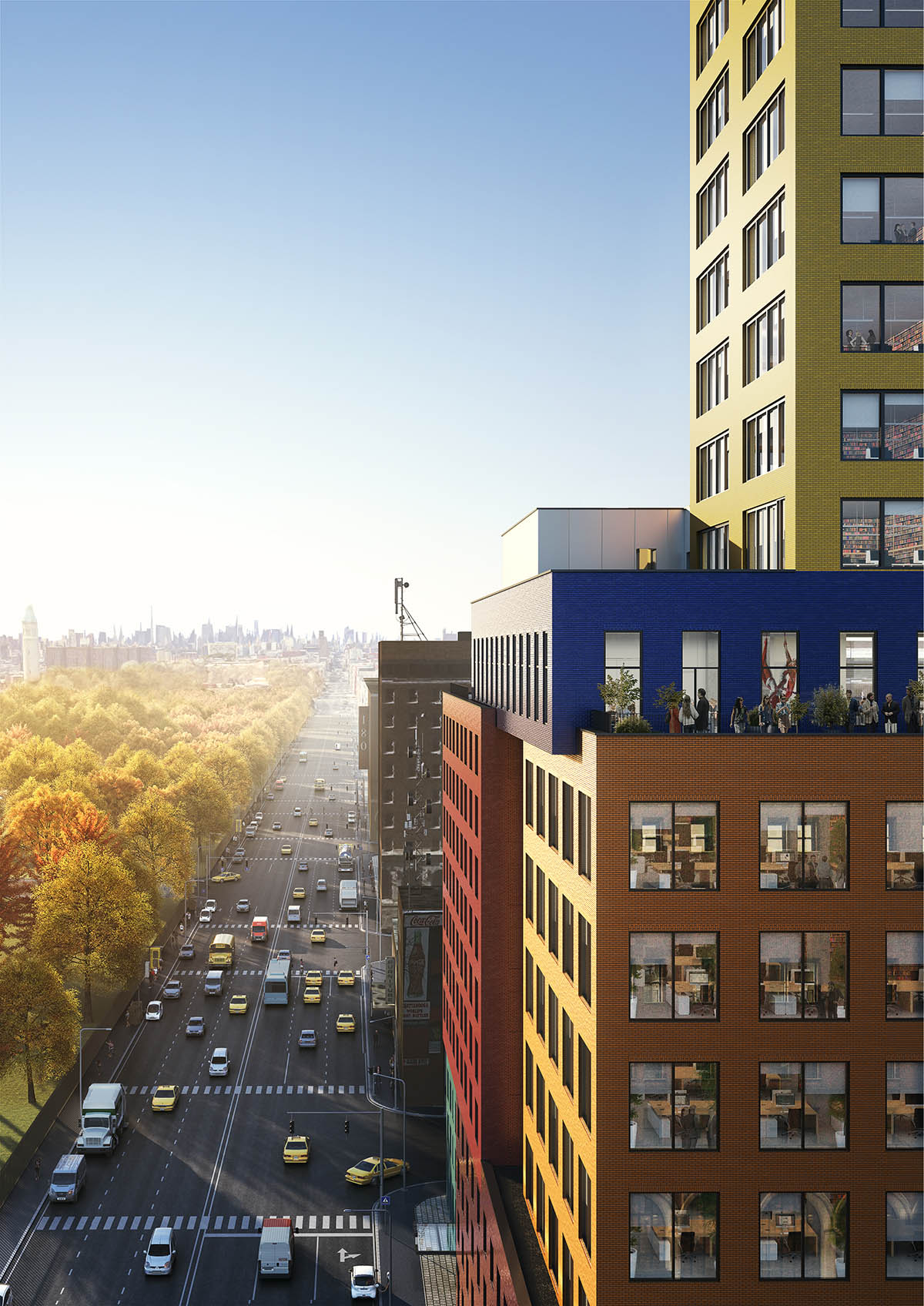 View towards Manhattan along Amsterdam Avenue

Inside, Radio Tower & Hotel provides an answer to the area’s need for a diverse range of hotel rooms, workspaces, event spaces and retail units.

"Washington Heights is the 5th largest neighbourhood in New York with a population of over 150,000 people, but it is currently served by just two 50-room hotels," stated the firm.

MVRDV's hotel will therefore be an important hub for those traveling for conferences hosted by the Yeshiva University and the New York Presbyterian Hospital, both of which are located nearby. Meanwhile, the event space located in the building’s blue volume will add a facility that did not previously exist in the neighbourhood, offering locals a space to host weddings and other parties with spectacular views from the adjacent rooftop terrace. View from the courtyard

"Radio Tower & Hotel, located at the thinnest part of Manhattan Island between the Hudson and the Harlem River, is a colourful new building which will strengthen an already wonderfully mixed and vibrant neighbourhood," explained Winy Maas, principal and co-founder of MVRDV.

"The building forms a ‘vertical village’ with blocks that are the same size as the surrounding buildings, thus avoiding the common drawback of large developments in which new skyscrapers overwhelm the existing character of the city. It will be a colourful, welcoming beacon for people entering Manhattan." 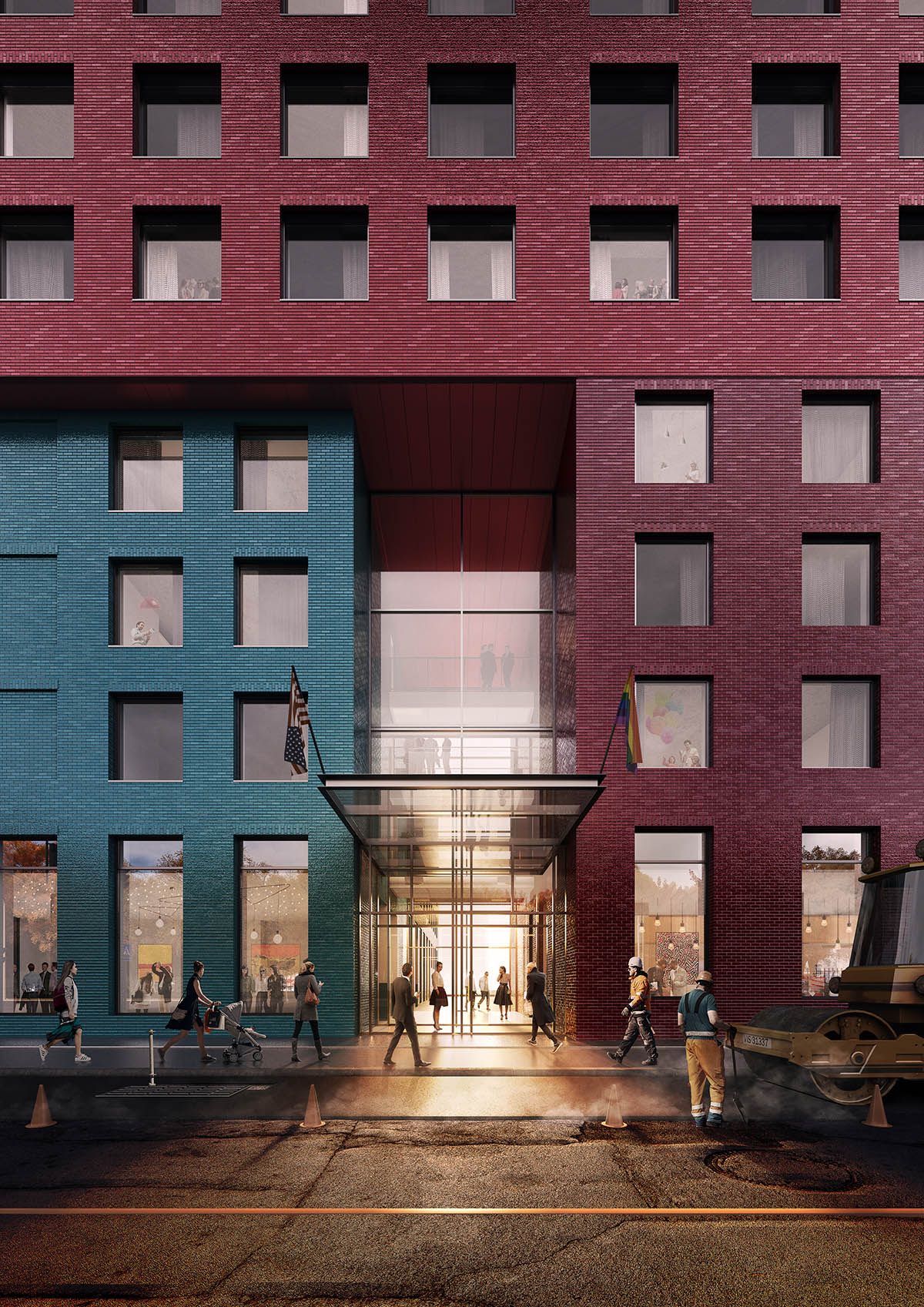 View of the building entrance

The ground floor functions are positioned to support an active street level and are well connected to the retail of 181st Street and bustling Amsterdam Avenue. The hotel entry leads to a ground level courtyard space open to both users of the building and residents of the neighbourhood, which will include a coffee bar and a community garden for use by the locals. Several roof terraces provide space for outdoor events and boast views of Washington Heights, Manhattan, and beyond.

Washington Heights is an area that is already going through significant development, and is likely to see even more dramatic changes in the near future. As one of the neighbourhood’s most significant developments to date, Radio Tower & Hotel attempts to show how such changes can respect and enhance the existing character of the area. 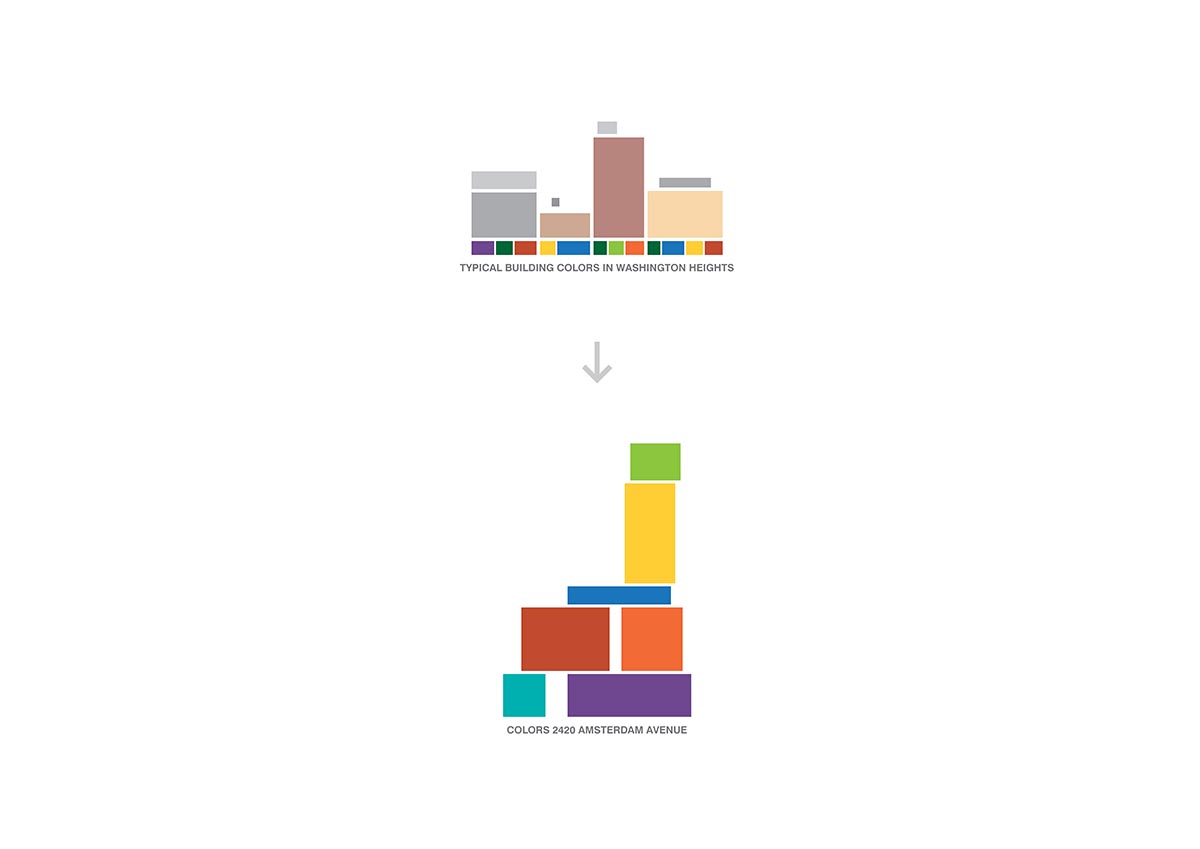 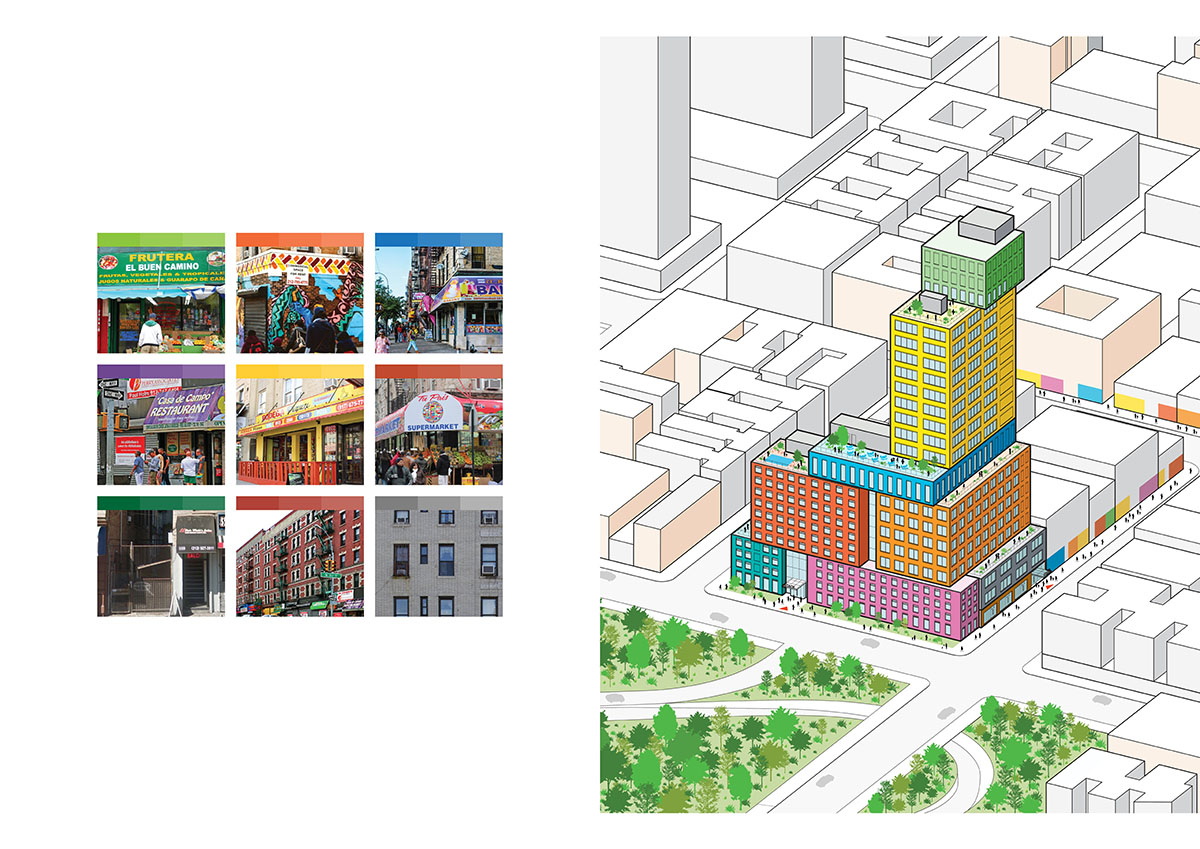 Diagram of the building in the context 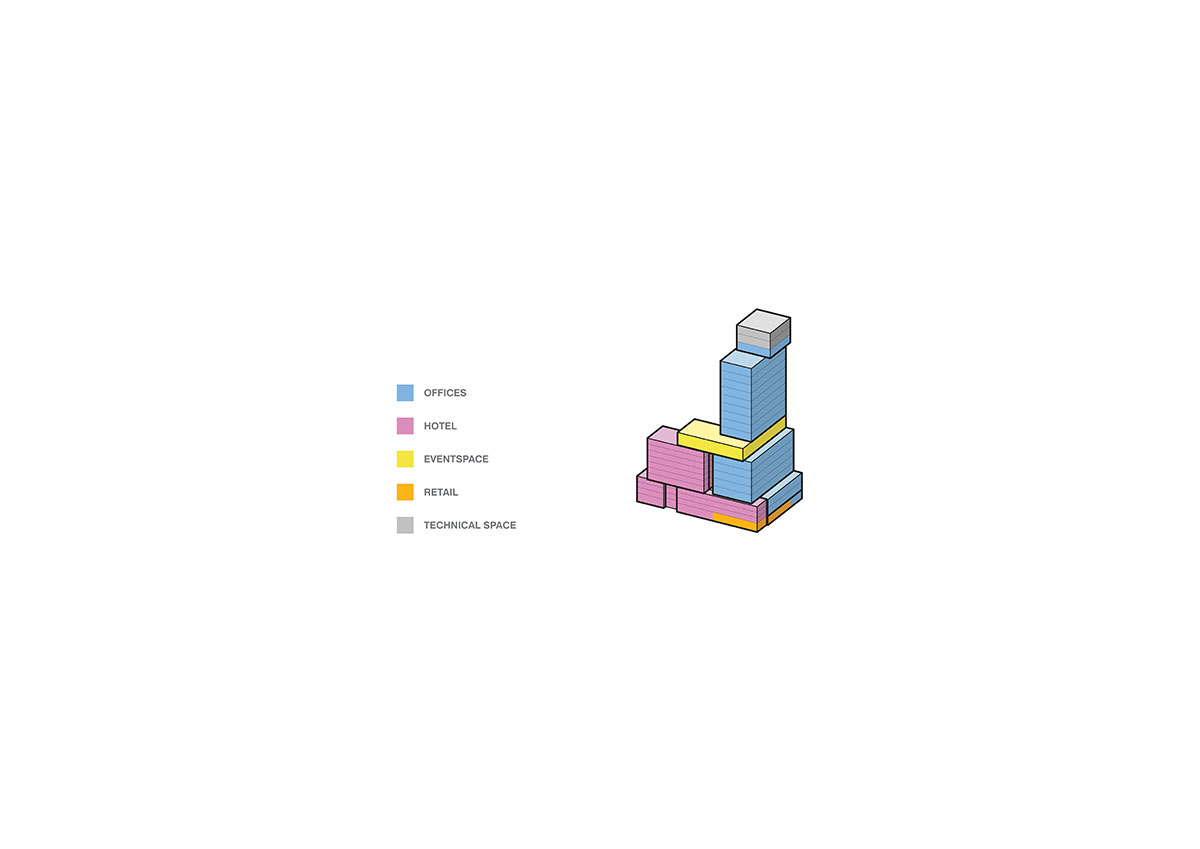 MVRDV is collaborating with executive architect Stonehill & Taylor and a team of experts including Workshop APD for interiors, Cosentini Associates for building systems, GACE for structural consultation, CANY Technical Services for façade engineering and Filament Hospitality. Completion of the building is expected in 2021.