The team of von Gerkan, Marg and Partners Archi­tects (gmp) has designed a new museum with two volumes - one of them features a sculptural copper-colored volume on its façade in Beijing, China.

Named Chinese Traditional Culture Museum, the new 91,126-square-metre museum is added as an important cultural component of the new cultural quarter in the Olympic Green in Beijing, joining the National Museum of China.

The museum building, realized as part of a competition held in 2013, marks the northern end of Beijing’s Central Axis and very close to the National Stadium, the Bird’s Nest, and the Asia Financial Center & AIIB Headquarters completed by gmp in 2021.

For the first time, thanks to this project, the museum offers an opportunity to present valuable collections of Chinese arts and crafts and items of intangible cultural heritage at national level.

Drawn on a a rectangular layout, the height of the building reaches at 50 meters and it spans 200 meters long, and 75 meters deep. As the firm explained, these measurements are derived from the urban design guidelines for cultural buildings along the River Yangshan.

"This division into three parts means that a roofed-over terrace is created at a height of 13.5 meters, providing public space all round the building," said gmp.

"It is protected by the six-meter cantilever of the roof, which also functions as solar screening for the exhibition areas behind the glazed facade."

Along its central axis, the firm designs two entrances to the museum, aiming to provide access points to the square to the east as well as to the river bank to the west.

Visitors are guided to the shared central foyer and to a 400-seat multifunctional hall as well as an exhibition hall for the temporary display of interactive formats.

The space is left open through the height of the building that allows to receive daylight through square roof lights.

"As visitors make their way along the balconies to the exhibition halls they enjoy varying vistas of the space," added the office.

The detailing of the wall and ceiling elements resonates with the design of the building envelope in terms of structure and color. The back-lit hexagonal ceiling panels are reminiscent of woven patterns in Chinese crafts and create a calm atmosphere along the access corridors.

The structural design of the building is envisioned as flexible as possible with large column-free areas to be able to allow a great variety of exhibition scenarios.

To combine the two museums under one roof, the interior space is flexibly subdivided with room-high partition elements, even though they cover quite distinct subjects: on the one hand intangible cultural heritage such as dance and music, and on the other hand Chinese arts and crafts with numerous, sometimes quite small, objects.

The structural pattern of the main body is a curtain wall facade that takes cues from the patterns and structures found in the art and craft exhibits.

"With its solar screening it generates a distinct atmosphere with dappled light that is reminiscent of traditional Chinese interiors," added the office.

"The three-dimensional effect of the building envelope is achieved with the large gap of almost one-and-a-half meters between the outer and inner facades and by a space structure consisting of pultruded profiles with a mat copper-colored coating that have been woven into a grid-like relief, projecting outward in the horizontal and inward in the vertical planes," gmp added.

Proposing a homogenous facade pattern, the pattern structure is made up of repetitions of a basic module of 3 meters by 2.2 meters to form vertical elements across the entire height of 22 meters of the two upper stories.

"This creates a facade without front and back," added the firm. Owing to the backlighting, the structure and depth of the facade can be best appreciated at night when the radiant structure can be seen from afar, seeming to float above the Olympic Green. 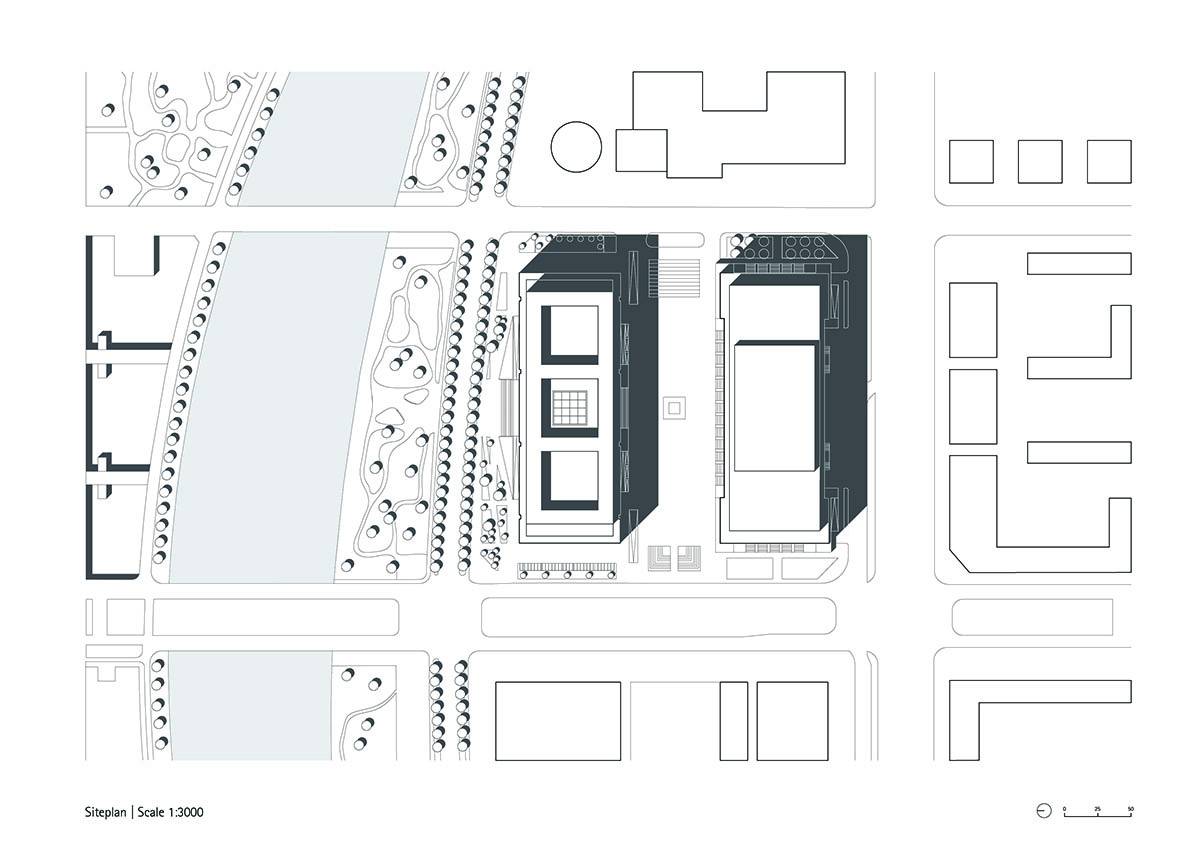 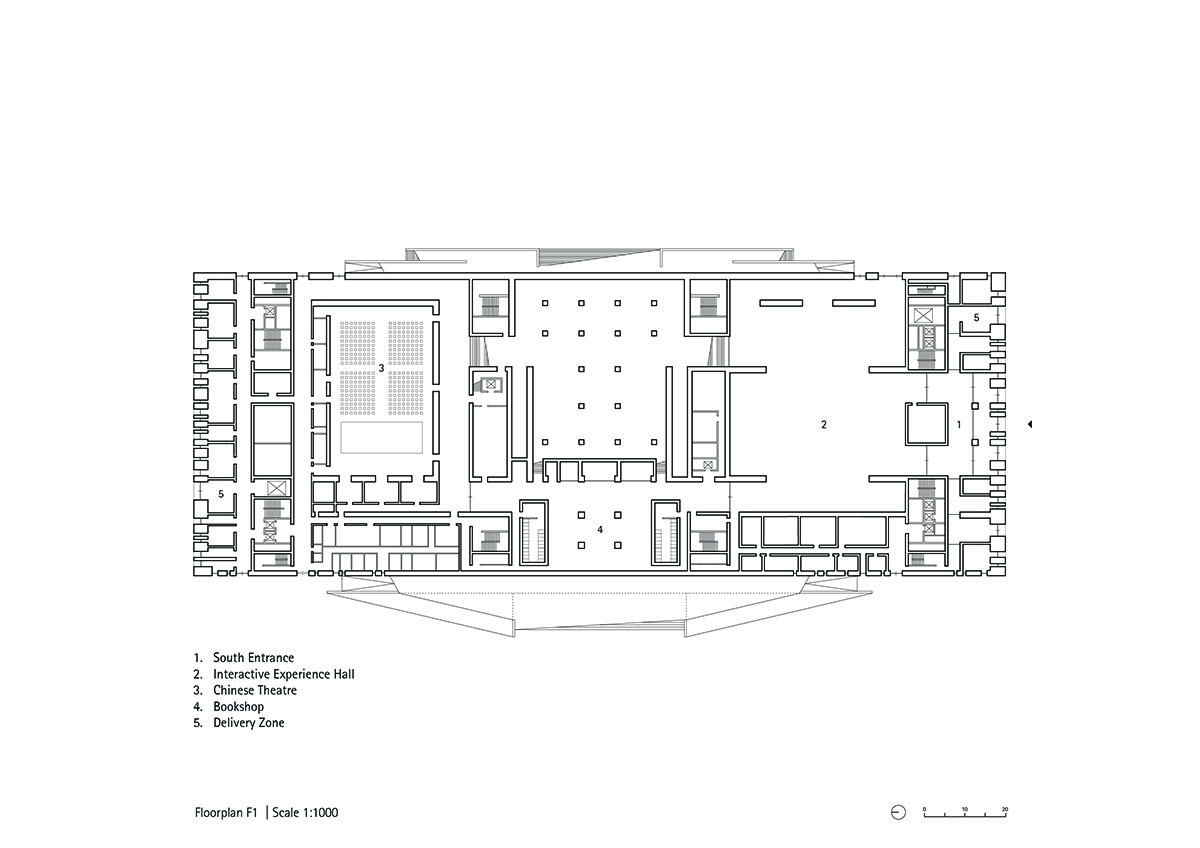 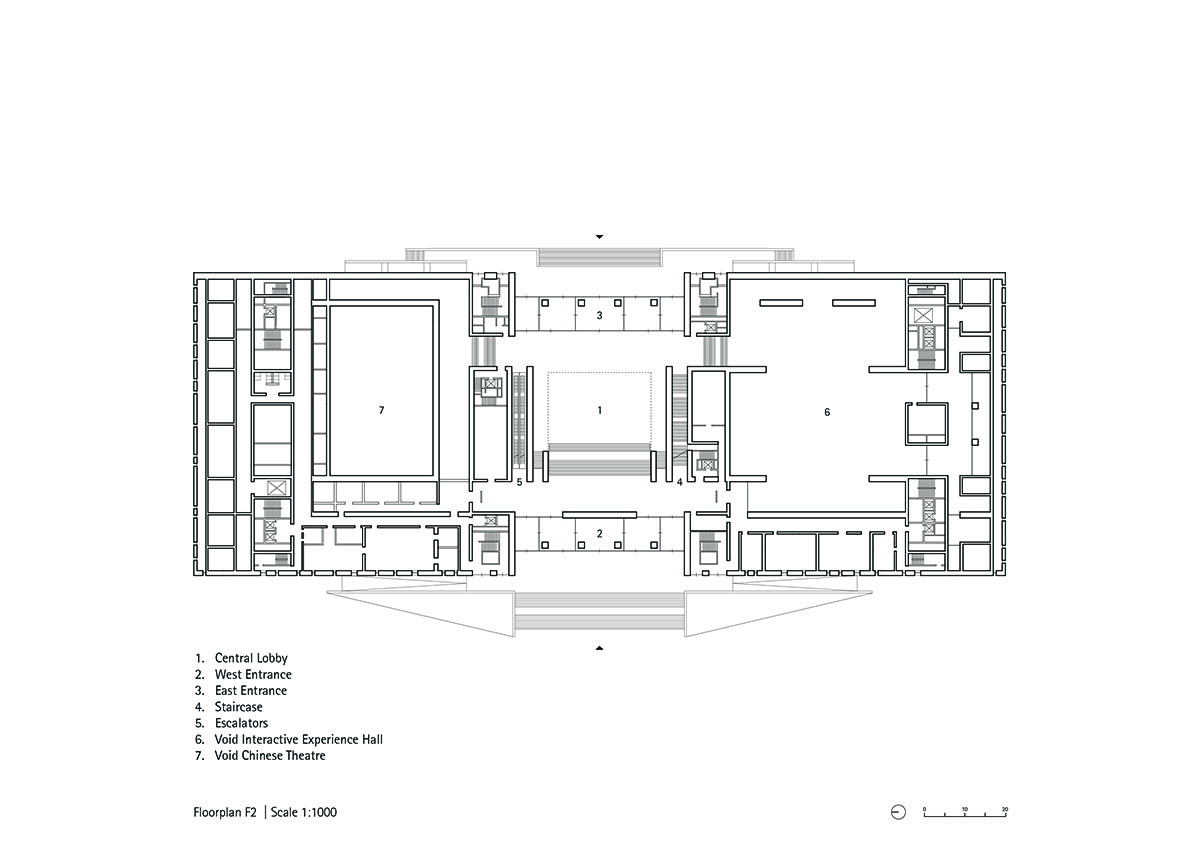 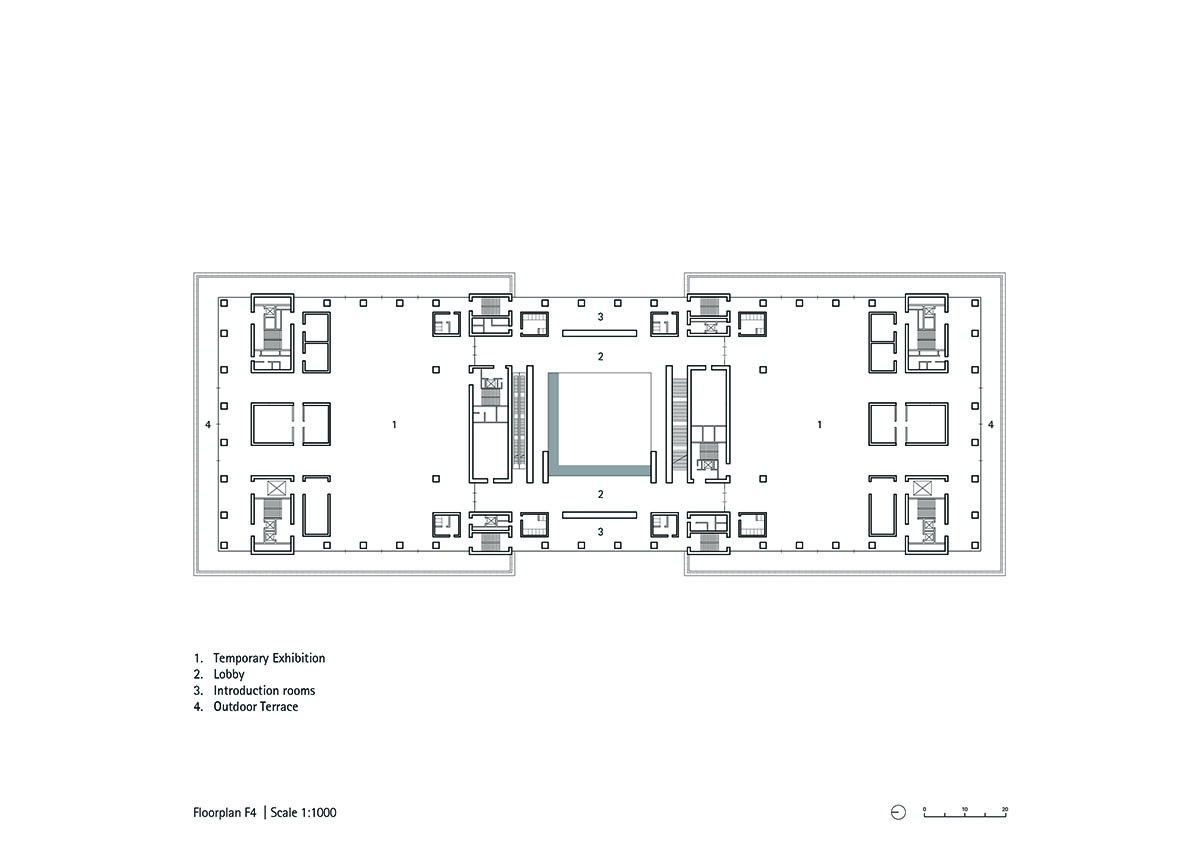 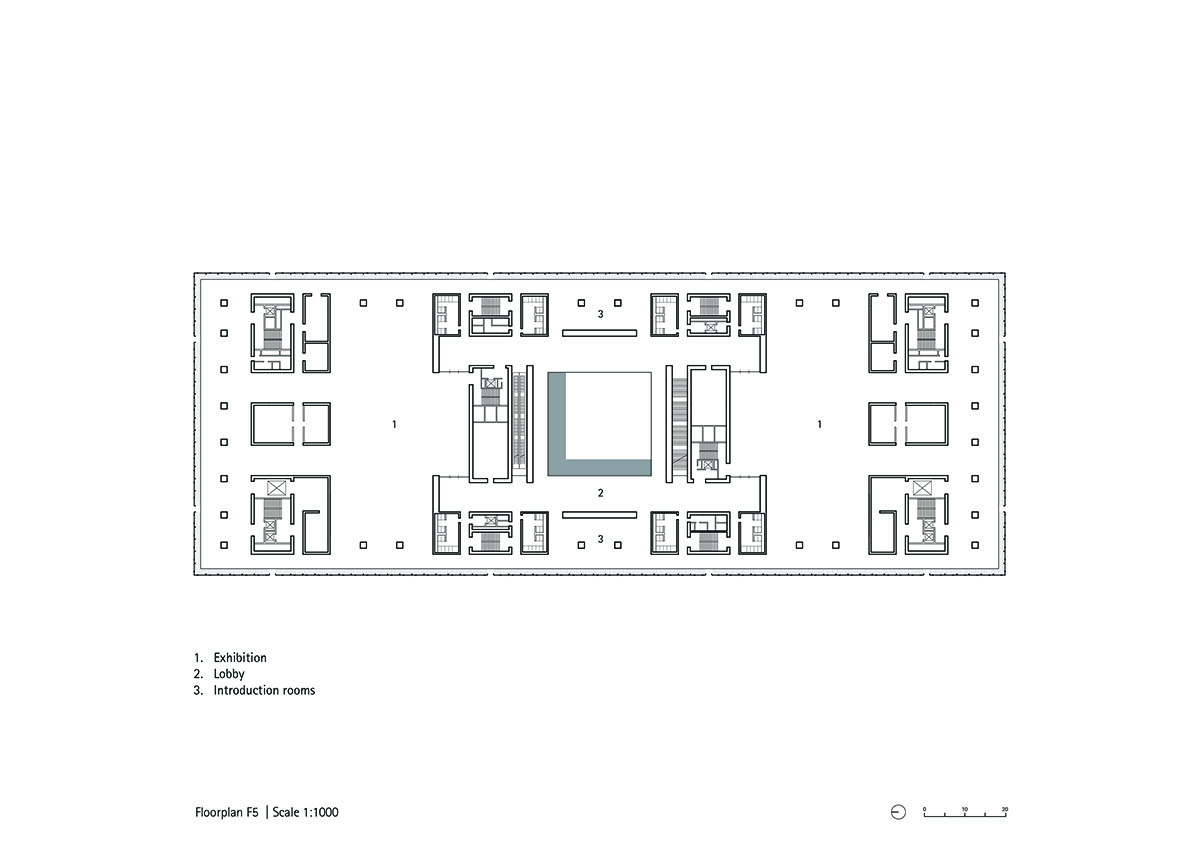 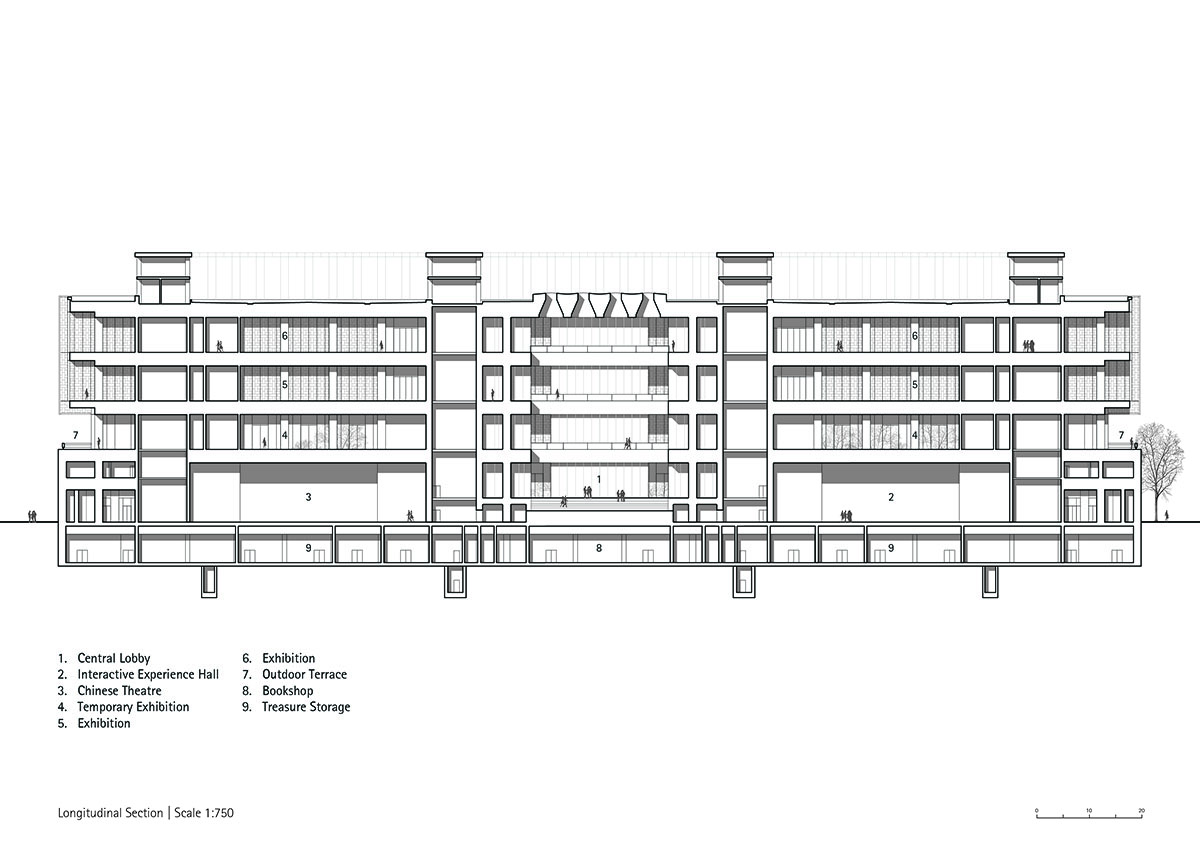 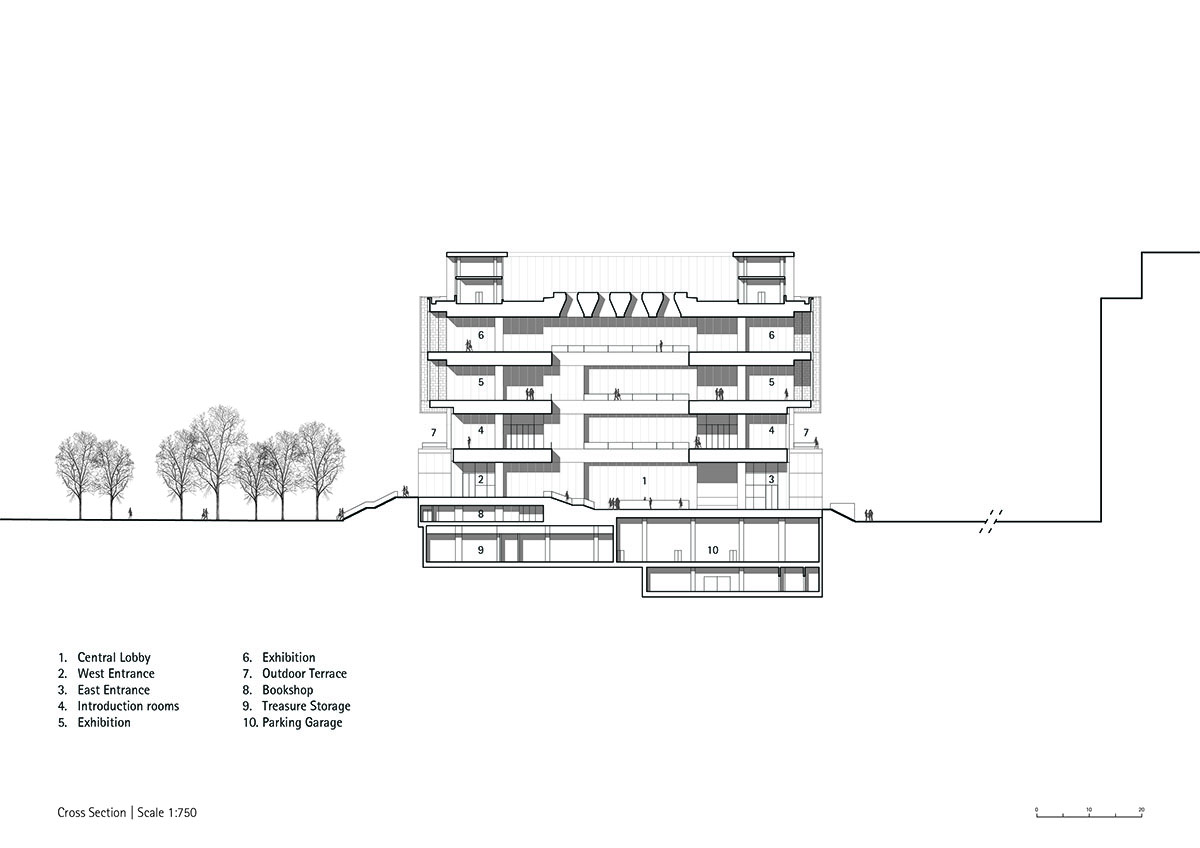 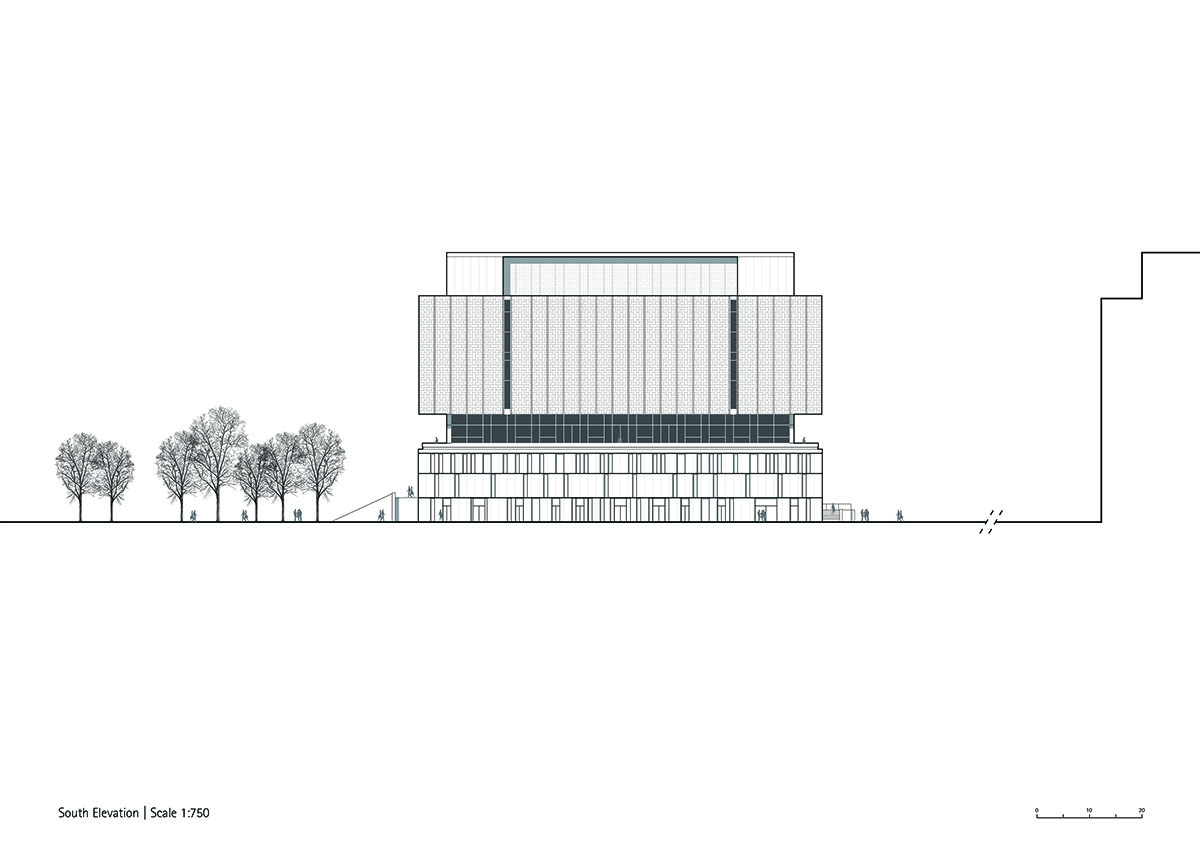 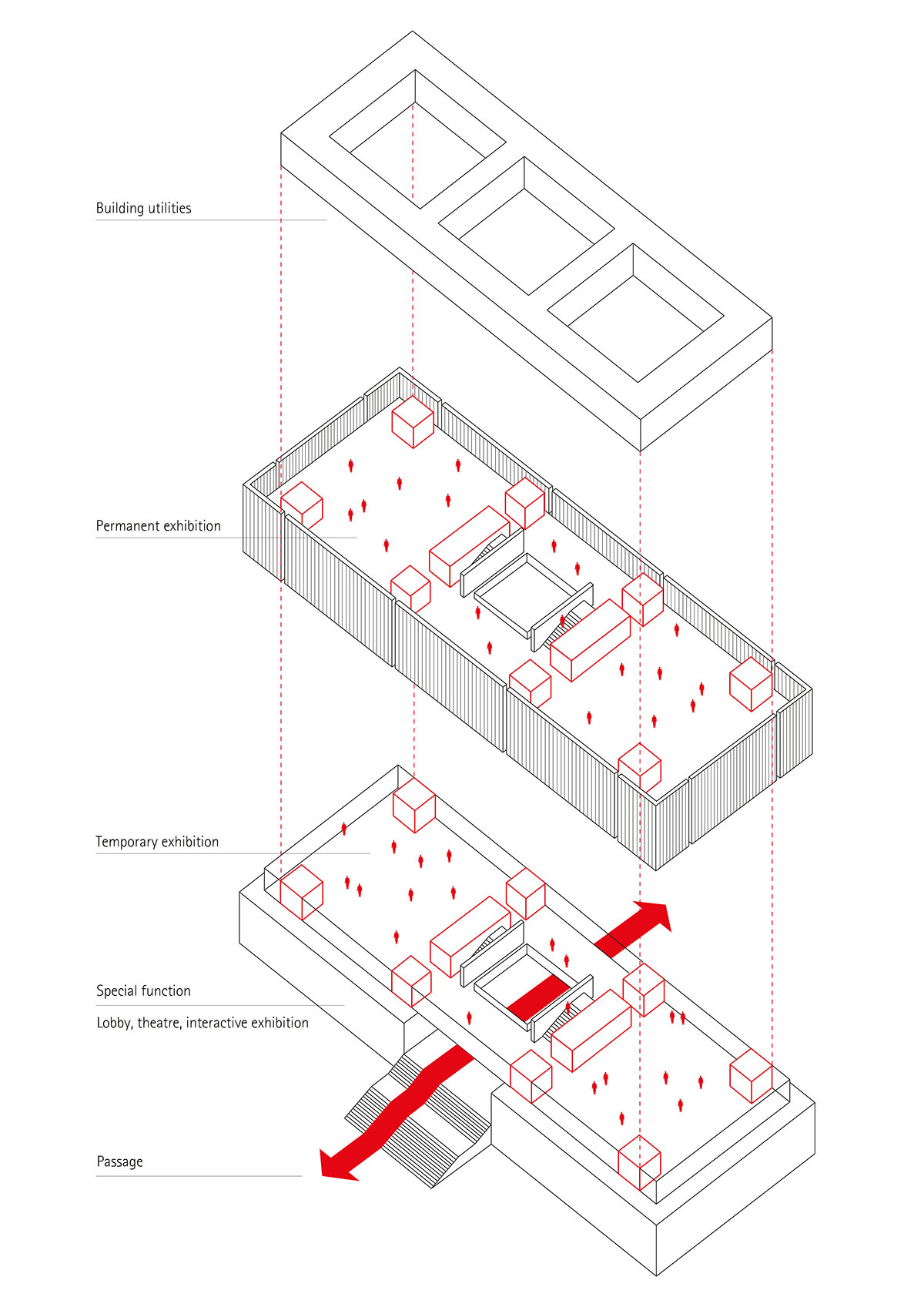