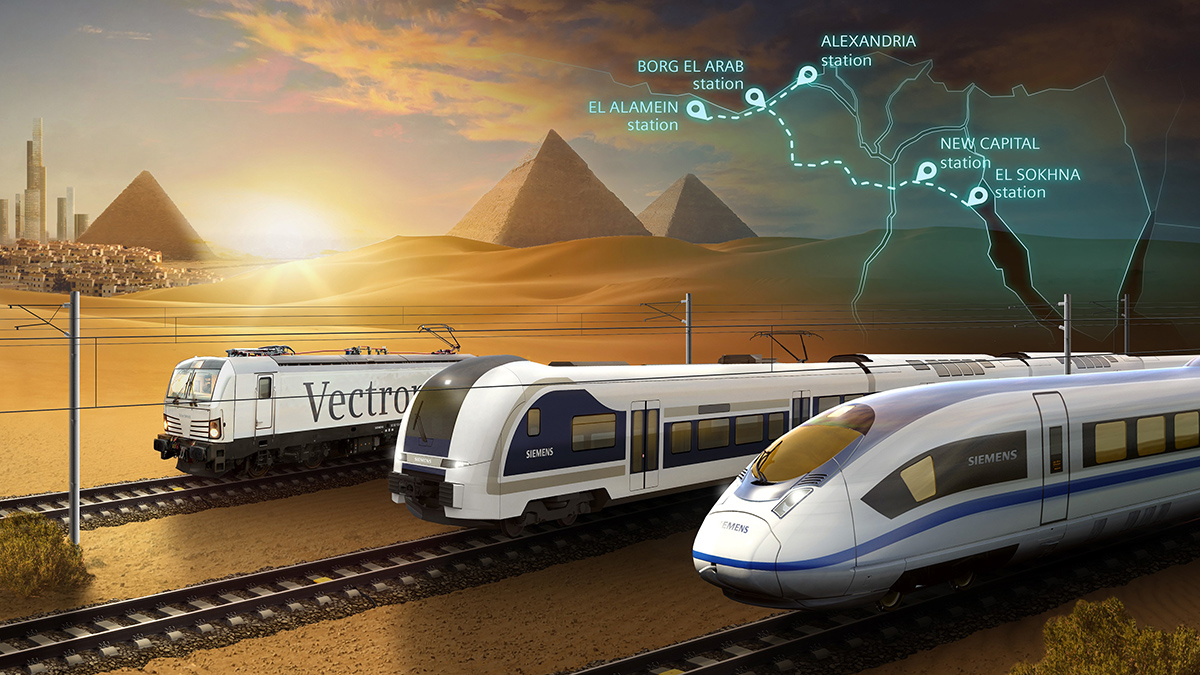 A contract with Siemens mobility was signed by Egypt to construct about 2000 kilometers of high speed rail in the country and the sixth largest of its kind in the world according to the German train manufacture. Egyptian president Abdel-Fattah El-Sisi witnessed the contract signing. The high-speed rail is supposed to link 60 cities nationwide via trains with operation at up to 230 km/hour according to Siemens.

Three lines are going to be encompassed in the country’s first high-speed rail network and will facilitate about 500 million trips annually the company announced taken into consideration the accessibility of the network to around 90 percent of Egyptians.  The first line of the $23 billion project will connect Ain Sokna city on the red sea with both Alexandria and Marsa Matrouh and will spread out for 660 kilometers.The second line will stretch 1,100 kilometers, establishing a linkage in Cairo in the north with Aswan’s Abu Simbel in the south, while the third line is going link Luxor in Upper Egypt with Hurghada city on the Red Sea.

Siemens Mobility and its consortium partners Orascom Construction and The Arab Contractors have signed the contract with the Egyptian National Authority for Tunnels (NAT). According to Siemens Mobility, its share in the contract is 8.1 billion euros and comprises the preliminary contract of 2.7 billion euros signed in September 2021 for the first line of the project. up to 40,000 job opportunities in Egypt expected to be created resulting from the project in addition to 6,700 jobs provided indirectly in Egyptian suppliers, the German company stated.

Today is a good day,” German Chancellor Olaf Scholz mentioned in a recorded speech addressing the signing of Saturday’s contract and cooperation between Egypt and Siemens.“It is a good day… for Egypt and a good day for economic relations between our two countries and a good day for climate change mitigation,” Scholz announced.He further elaborated that Egypt is becoming a pioneer in rail technology in Africa, hoping that other countries will follow this example.The contracts being signed today will impact the replacement of millions of journeys by car, truck and bus,” Scholz said. “This will result in less smoke, fewer carbon emissions and better air quality.” Scholz said traveling in Egypt via train will be fast, clean, comfortable, affordable and safe, in addition Egypt’s decision to implementing the project in cooperation with Siemens is “bold and far-sighted.”“[It is] a trailblazing decision both for the Egyptian people and Egypt as a business setting; a decision that will renovate your country and is considered to be a milestone for German-Egyptian economic relations,” the German chancellor further indicated.

Siemens President and CEO Roland Busch said the high-speed rail project in Egypt is the largest in the company’s history since its establishment 175 years ago during his meeting with El-Sisi in Egypt during the signing of the contract.

El-Sisi said the new electric train network reinforces the prolific collaboration between Egypt and Germany in the field of infrastructure.

The president additionally mentioned that the network signifying a significant addition to the country’s transportation system, marks the commencement of a new-fangled era for railways in Egypt, Africa and the Middle East.

Another advantageous for this project besides being much faster than other transportation means. There will be around 70 percent cut in the carbon emissions as opposed to current car or bus transport in the fully electrified network executed by the German company, the company said.

“In Siemens you have found a strong partner that demonstrates what ‘Made in Germany’ means; a company that this year celebrated 175 years of innovation, inventions and technological revolutions” Scholz said.