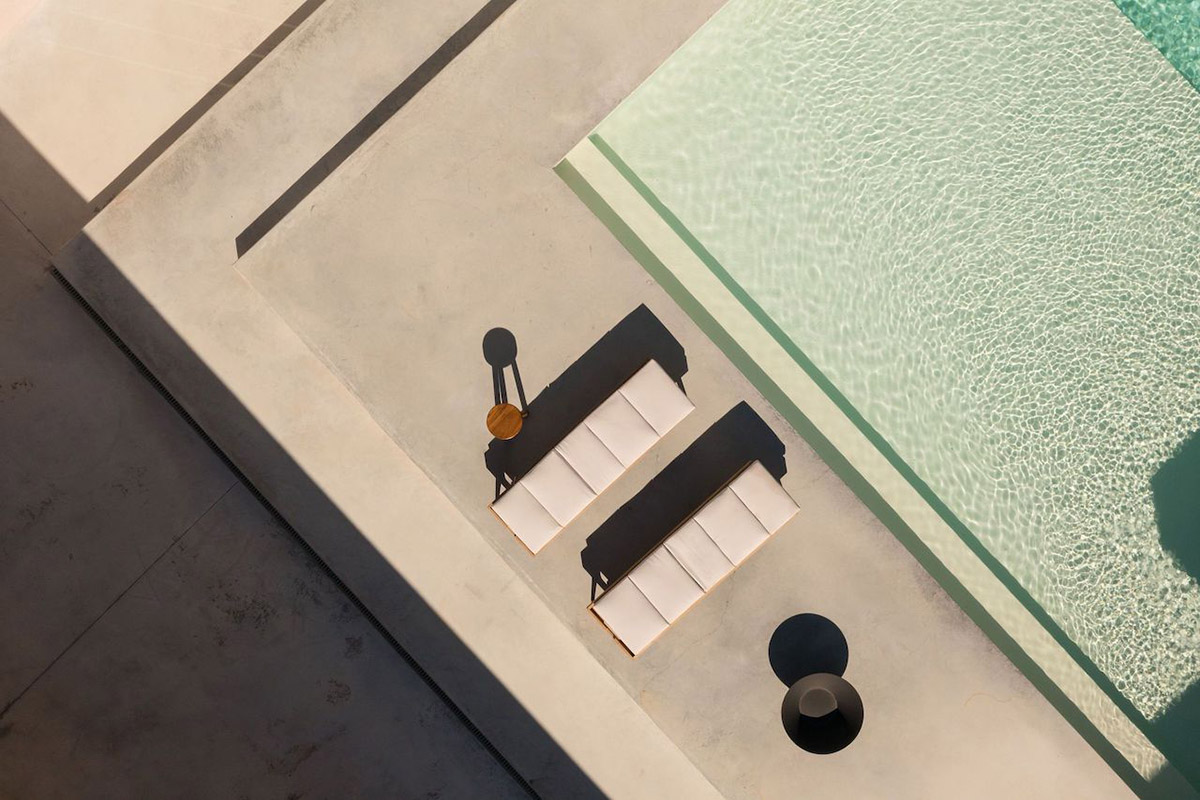 Renovation and refurbishment of a residential structure in the town of Cartaxo, north of Lisbon, resulted in A Saramaga a project that was conceived by architecture practice DC.AD and that comprises the refurbishment of a residential building which was developed for a young couple associated to the art world and who wanted to leave Lisbon and find somewhere secluded to both live and set up an artistic residencies programme; Saramaga AIR - Artists in Residence.1 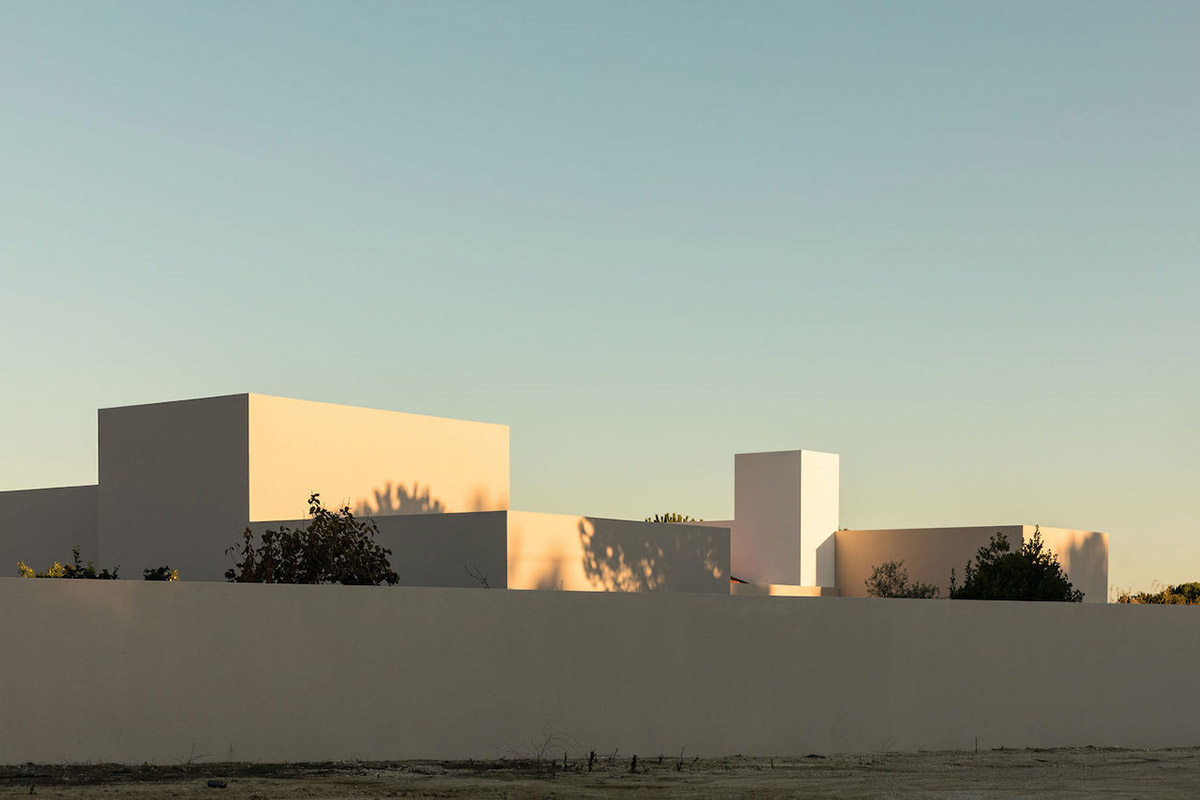 The architects stressed that the building’s original architectural features were quite unusual; they were exaggerated and had many disconnected elements and references which had resulted in "a rather disjointed combination of the whole". 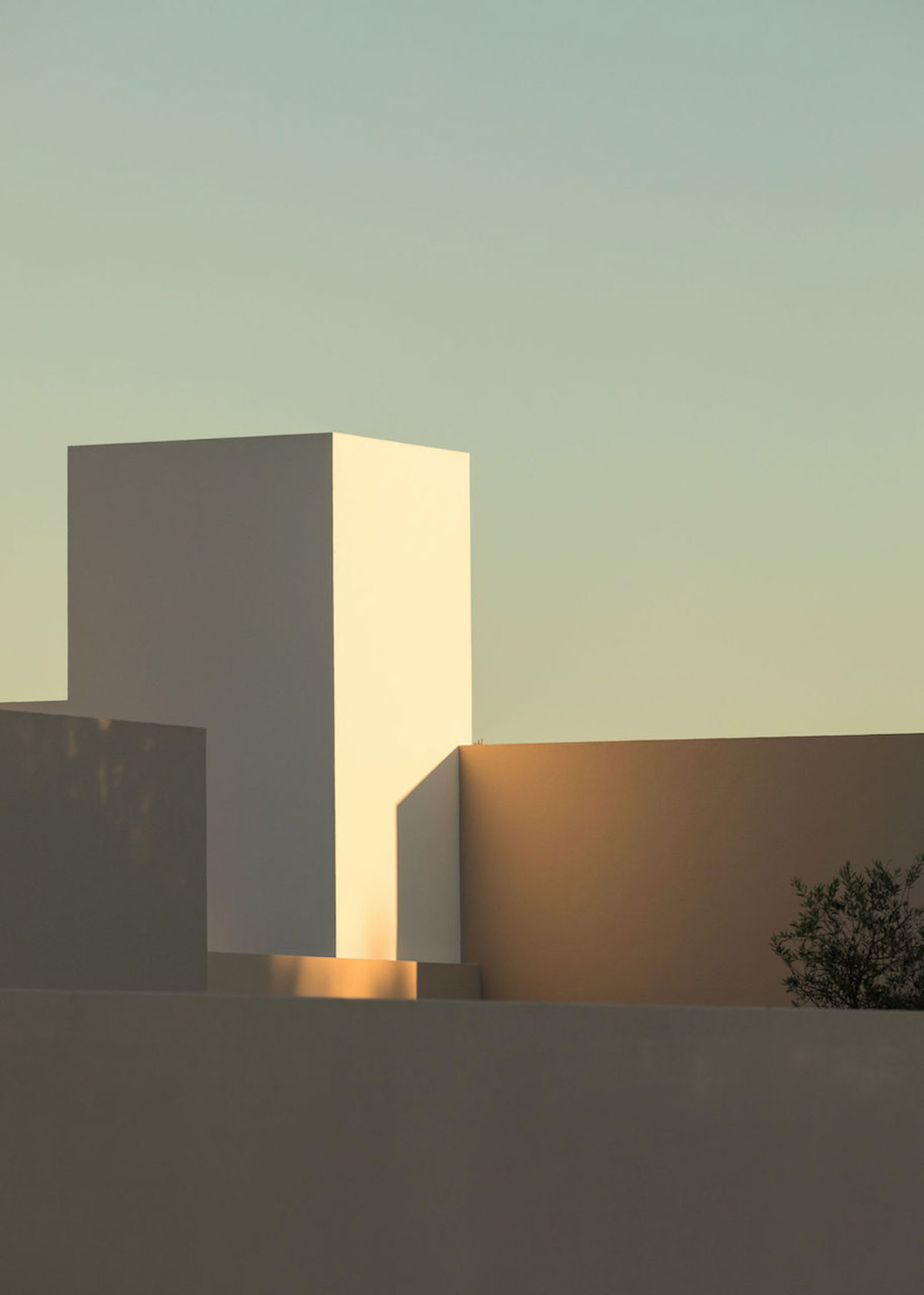 Therefore the main challenge for them was to search and find a graceful formal and functional coherence, a guideline that would give a new meaning to the existing architectural setting. A new life. 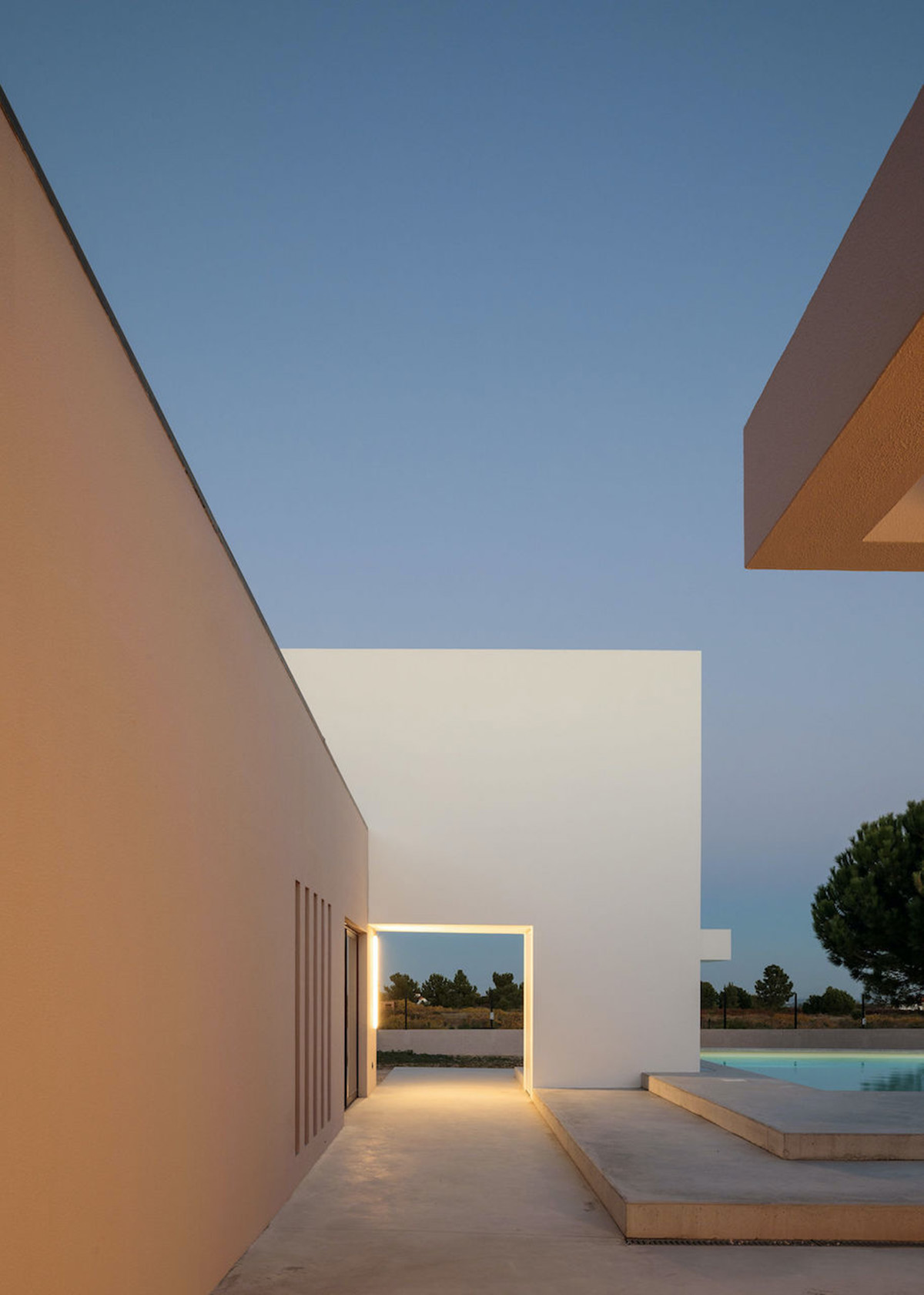 Thus is fitting that the name A Saramaga, "thoughtfully bestowed on the property as a way of paying tribute to a former local midwife whose image was taken up by the local community as a symbol of birth and the celebration of life." 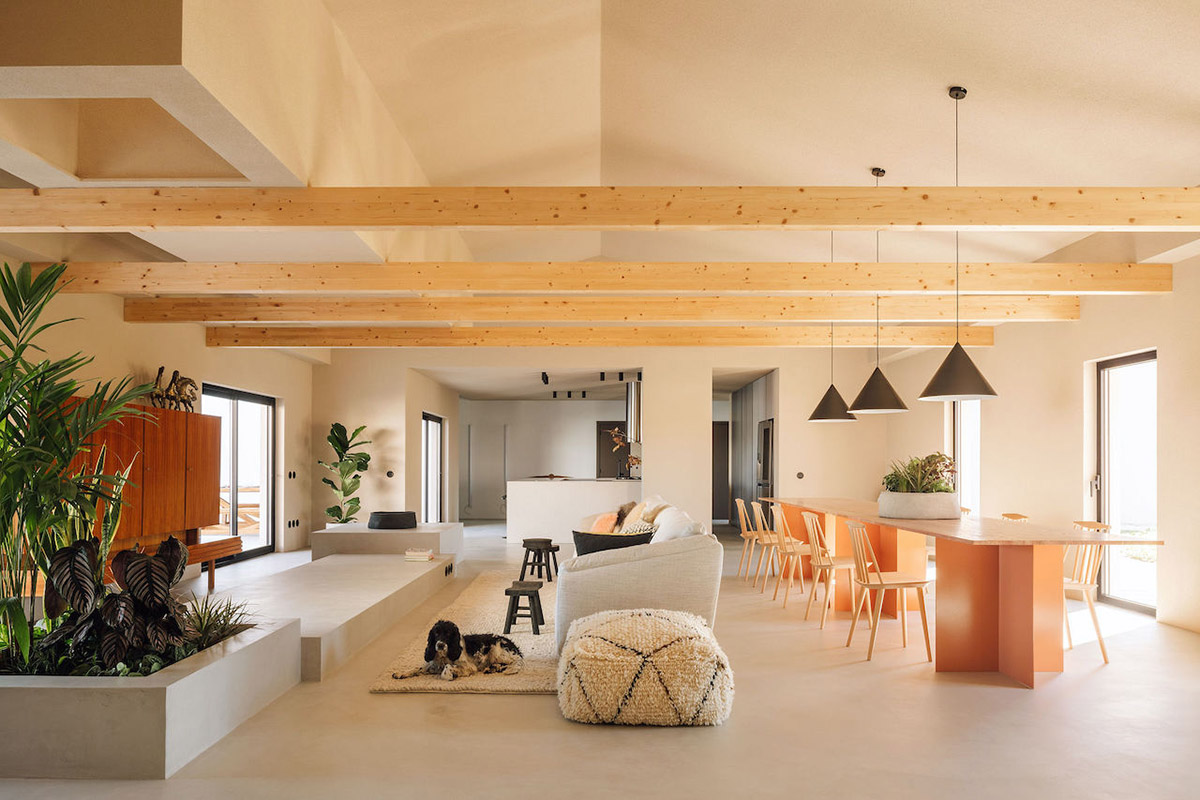 On the outside the openings were redesigned and exterior surfaces were painted in textured shades of beige and white to provide clear placing of the different volumetric structures. Secondary elements such as low walls and paved walkways were eliminated.

And most striking, an existing ornamental shallow water mirror was transformed into a swimming pool and by a creative playing of the patio’s pavement levels, newly fashioned platforms allowing different types of arrangements that permitted a more functional and fluid appropriation of the outdoor space. 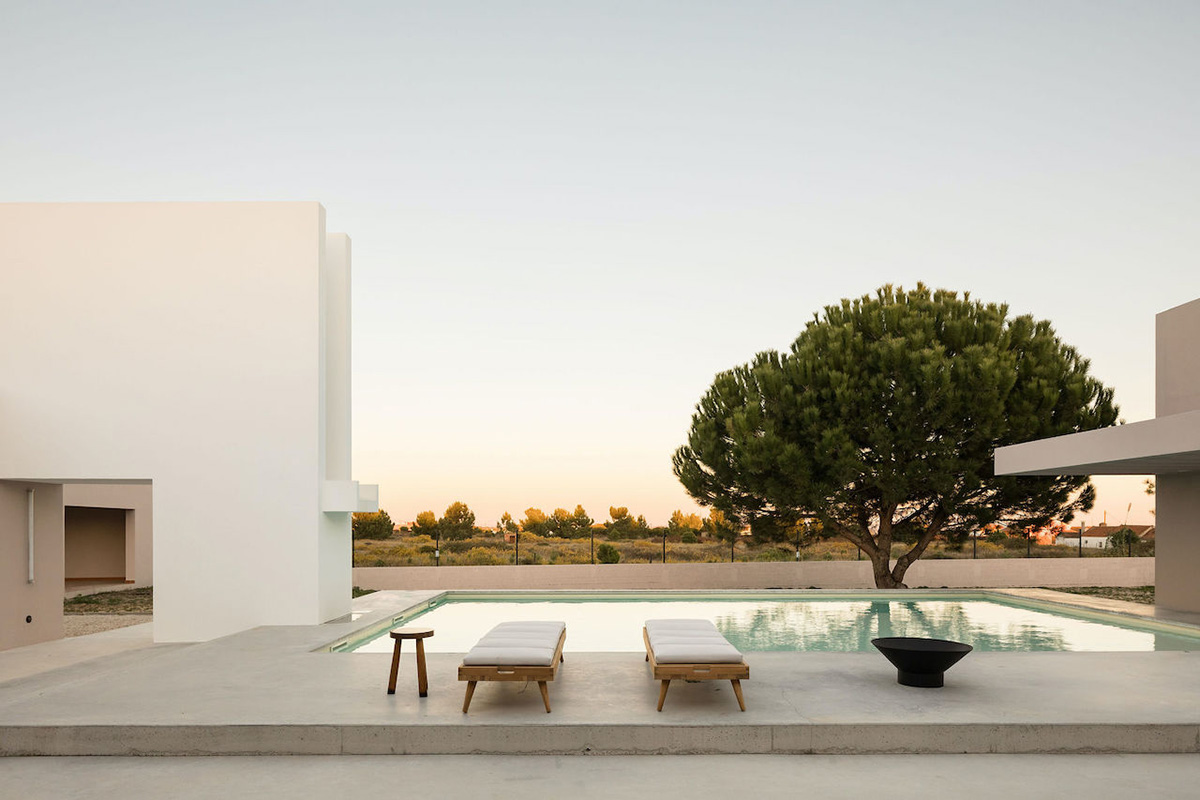 This 5,000-square-metre complex is set in a pine forest includes leisure spaces, with its garden and swimming pool areas also offering a studio for  artistic endeavours or related events.

The organisation of the inside spaces was generally maintained; the entrance to the house is on the west side, at a point that separates the social from the private areas. 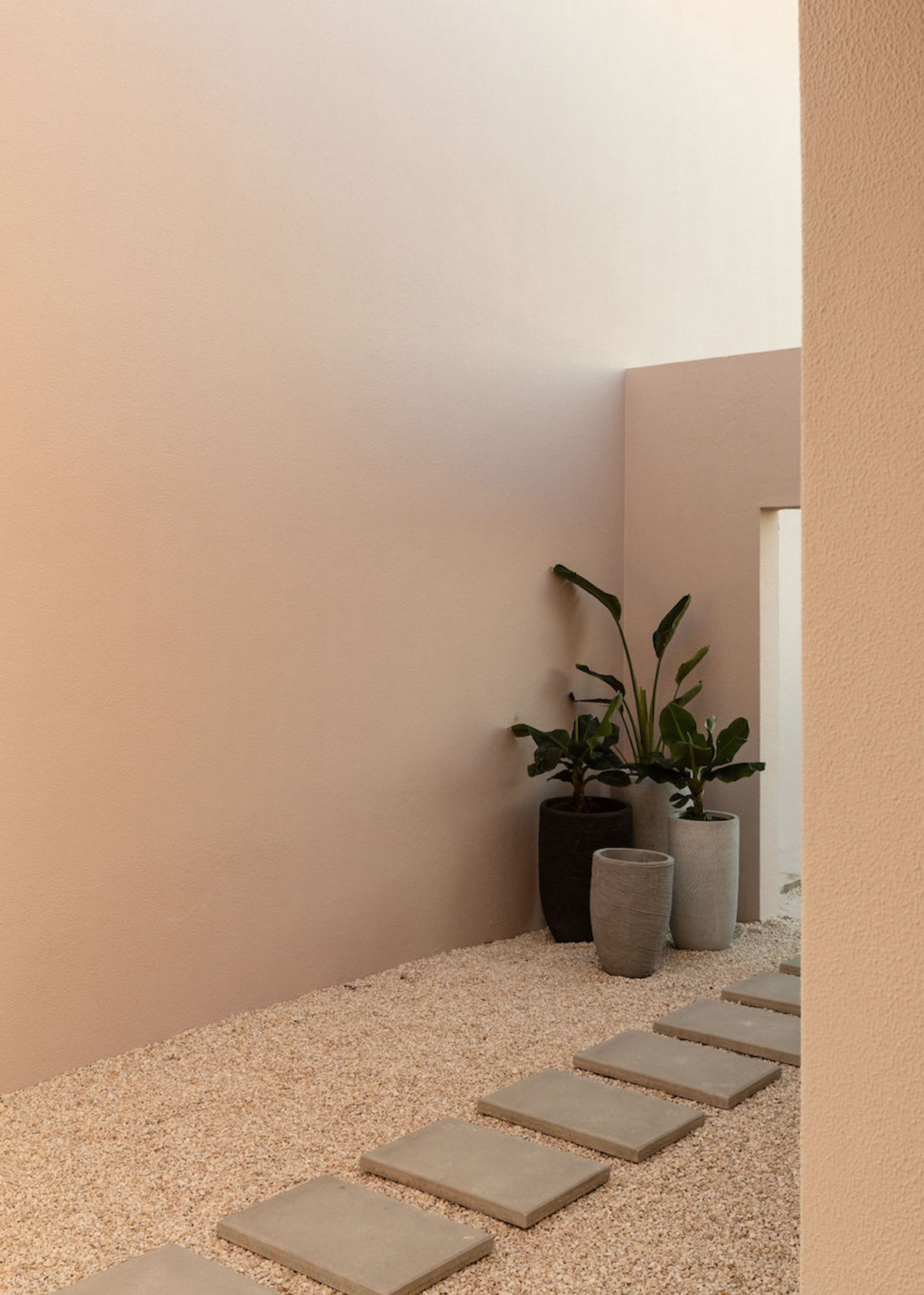 An open kitchen was placed in the centre of the structure, favourably positioned in relation to the private and social areas of the house, to the exterior and to the swimming pool, becoming the heart of the house; a functional transition and meeting point and offering an access through to the living room area. 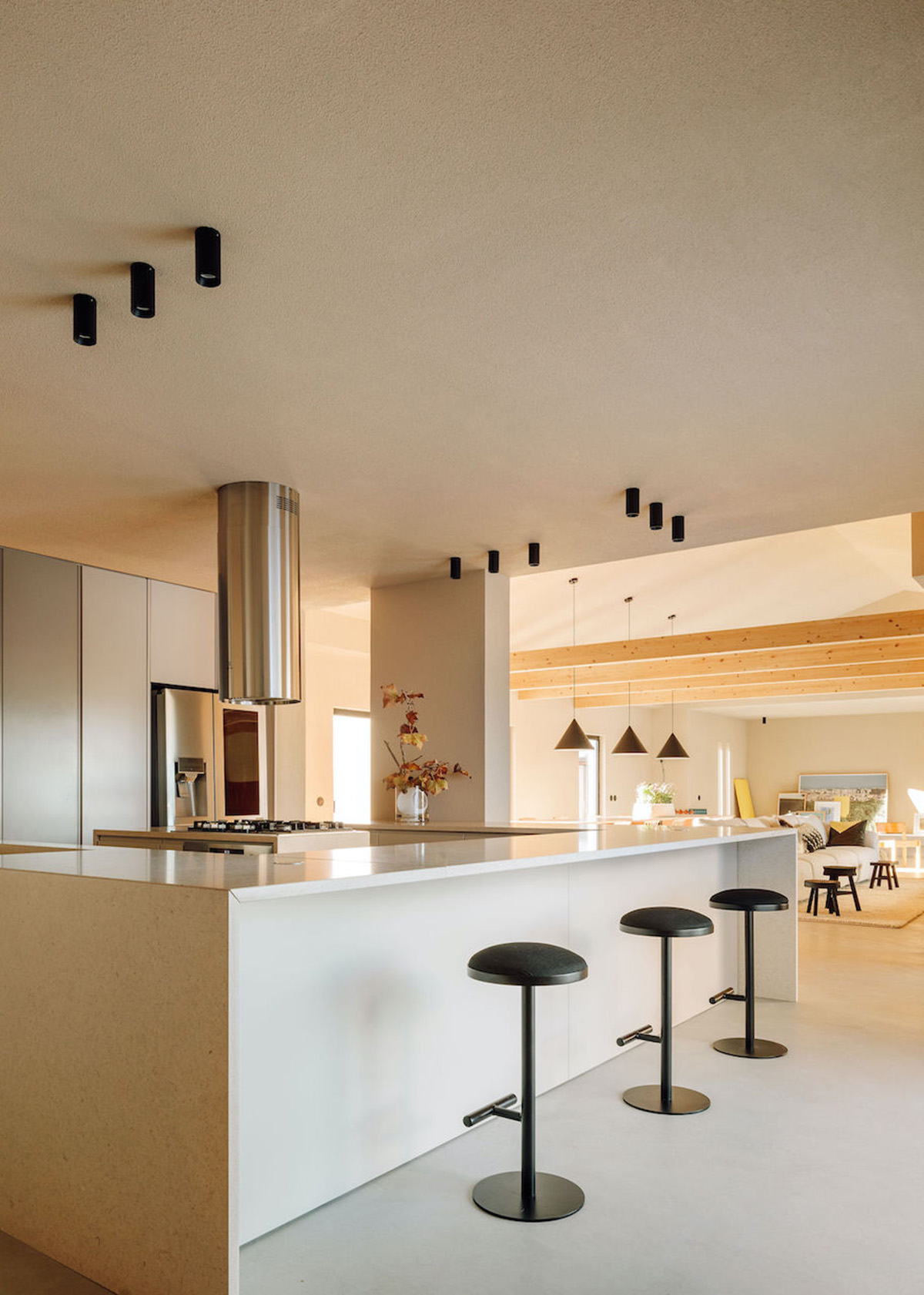 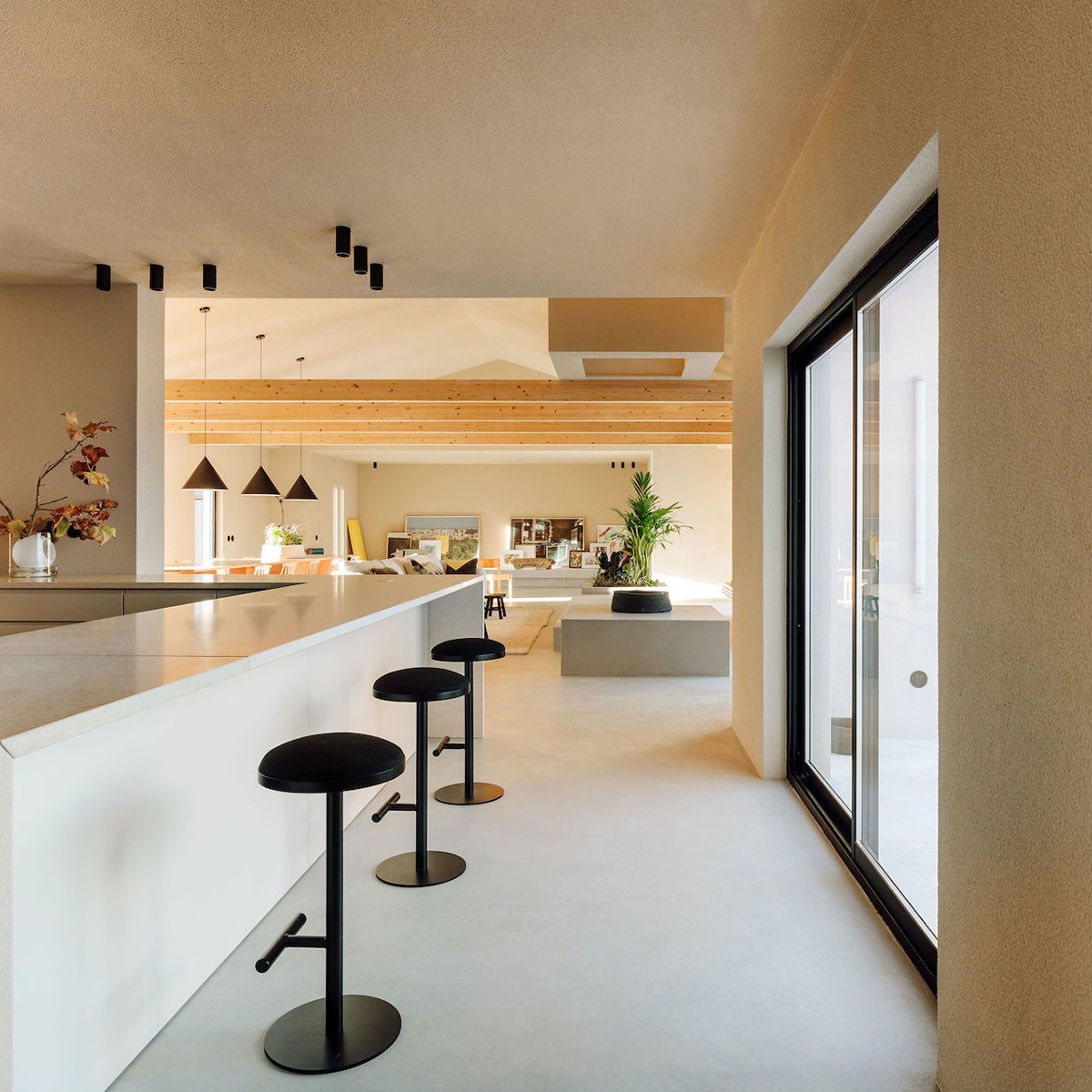 The resulting main social area is generously proportioned and is the prime space of this house -or “noble space” as it becomes in Portuguese, notable for its high ceiling and the transitional effect that adds a kind of welcoming effect in the space. 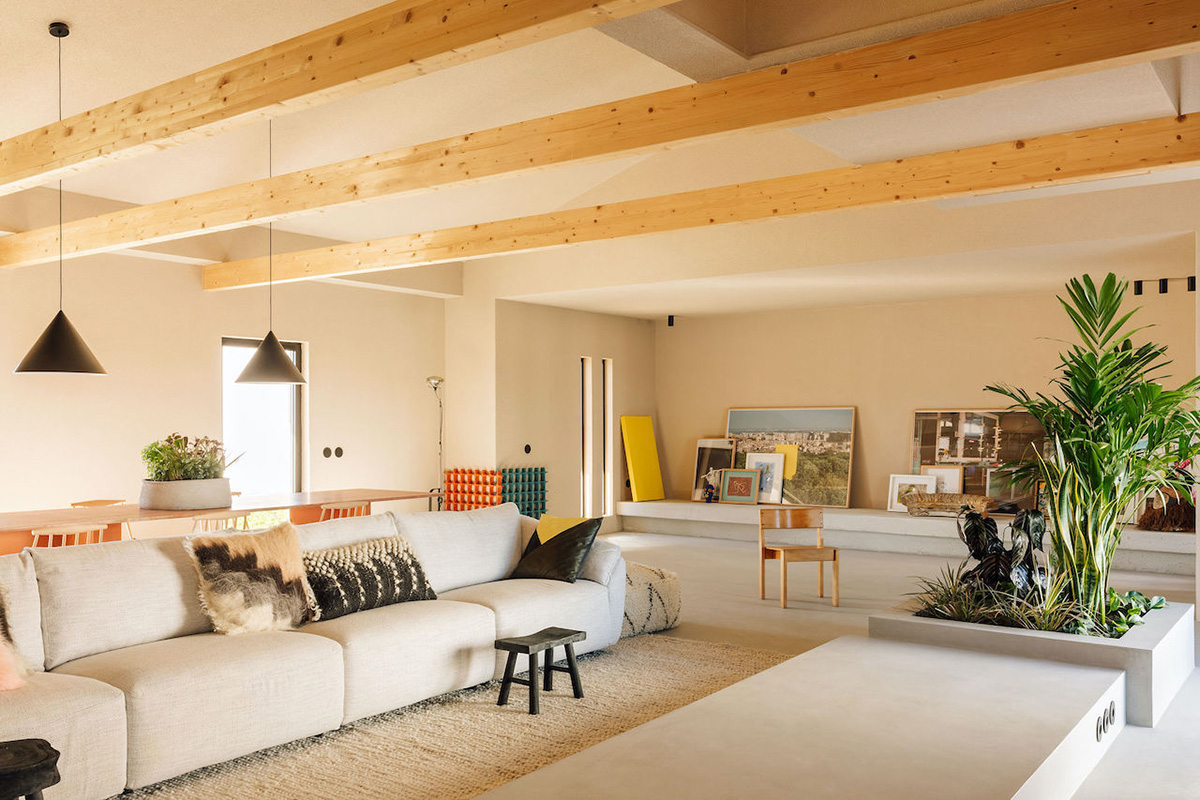 "The wooden ceiling beams provide texture and a welcoming scale to the space and support the new skylights bringing in natural light," explained the office.

Below the skylights, a concrete platform fashioned in several levels incorporates a sitting area, a long coffee table and a green receptacle feature that provides a touch of natural vegetation to the space and sets the longitudinal organisation of the room, in one simple gesture.

A large table in natural red travertine stone was also designed for this area reasserts the space proportions. 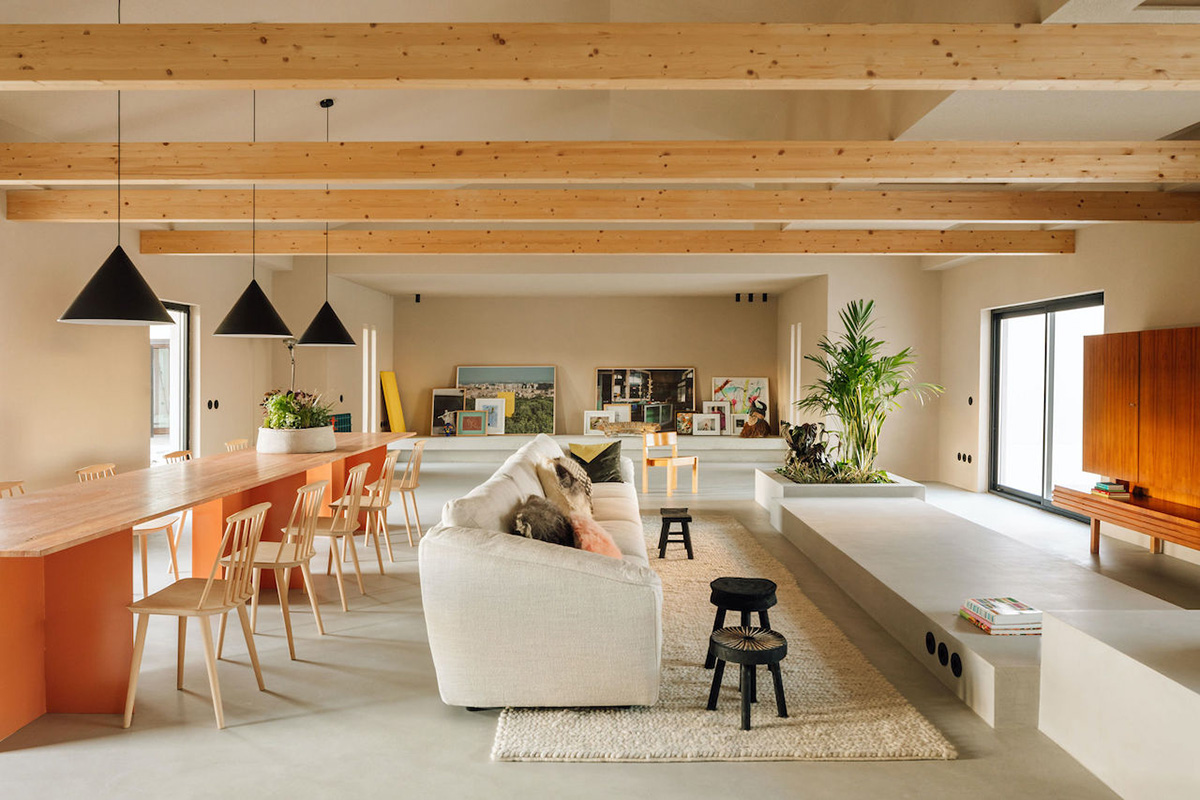 "In the private wing of the house the small patios to the south let light into the bedrooms and bathrooms."

These are distinctively painted each in a different colour highlighted by the natural stone washbasins which are colour-coordinated in the same room shades. 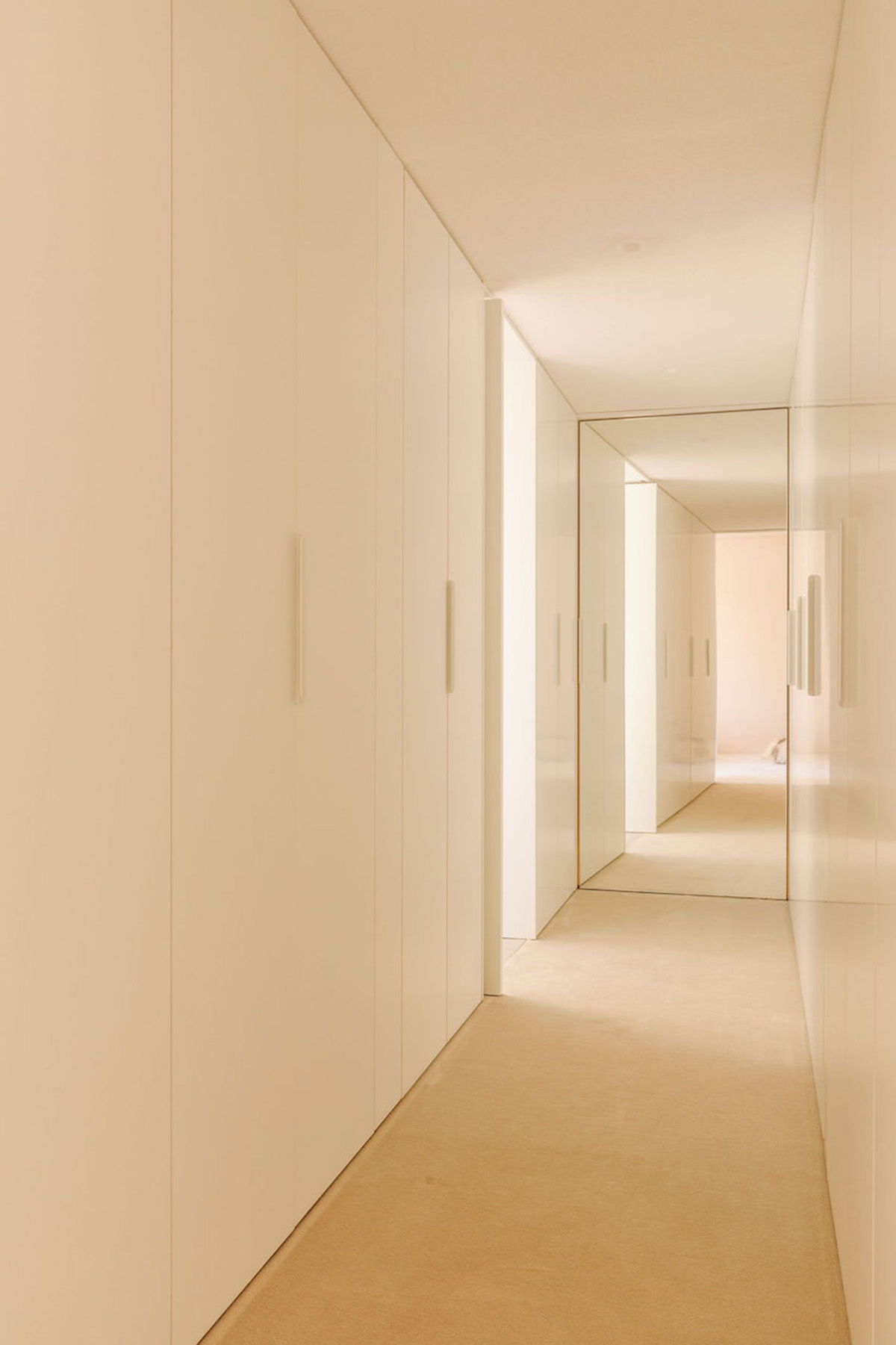 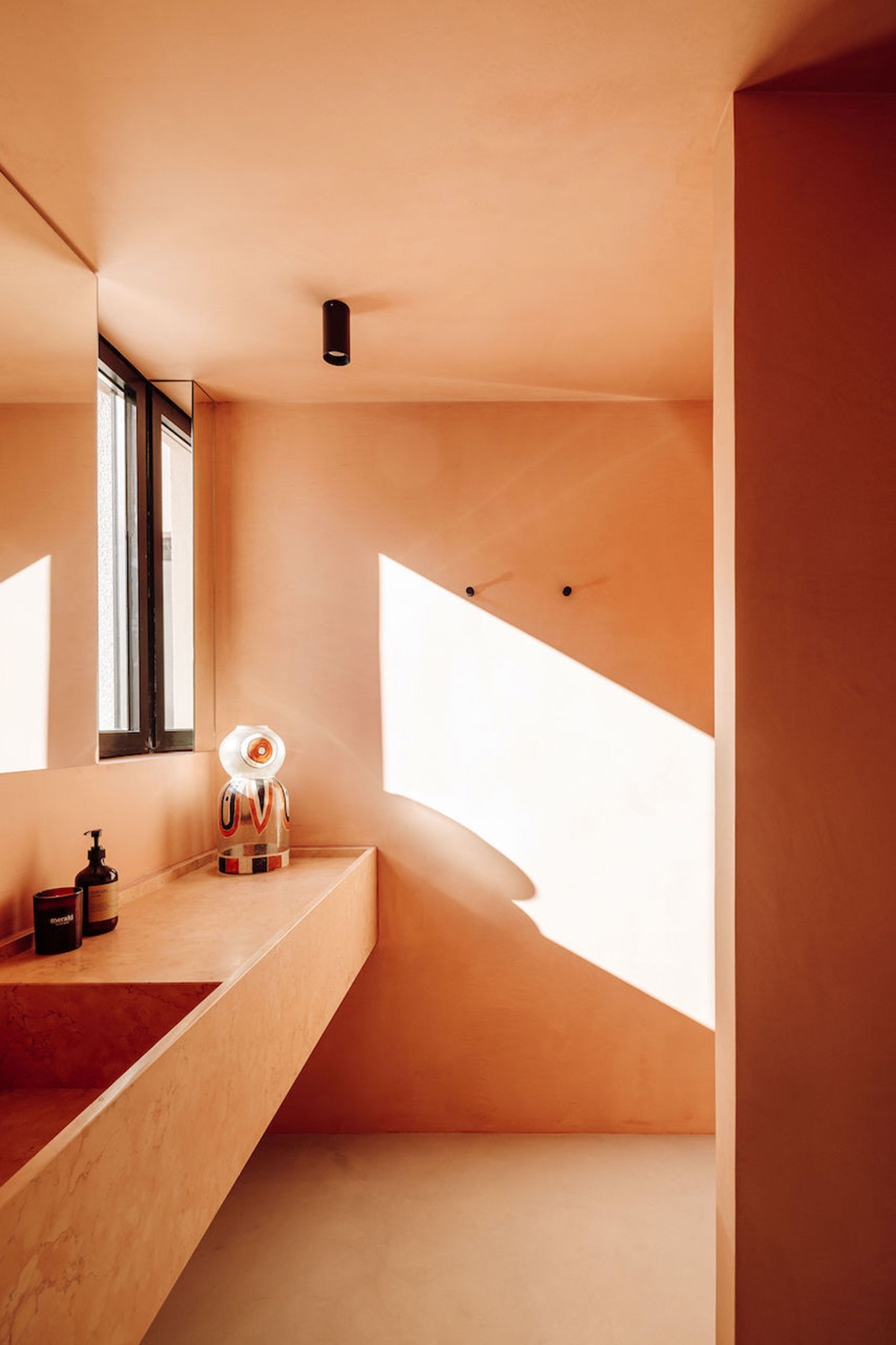 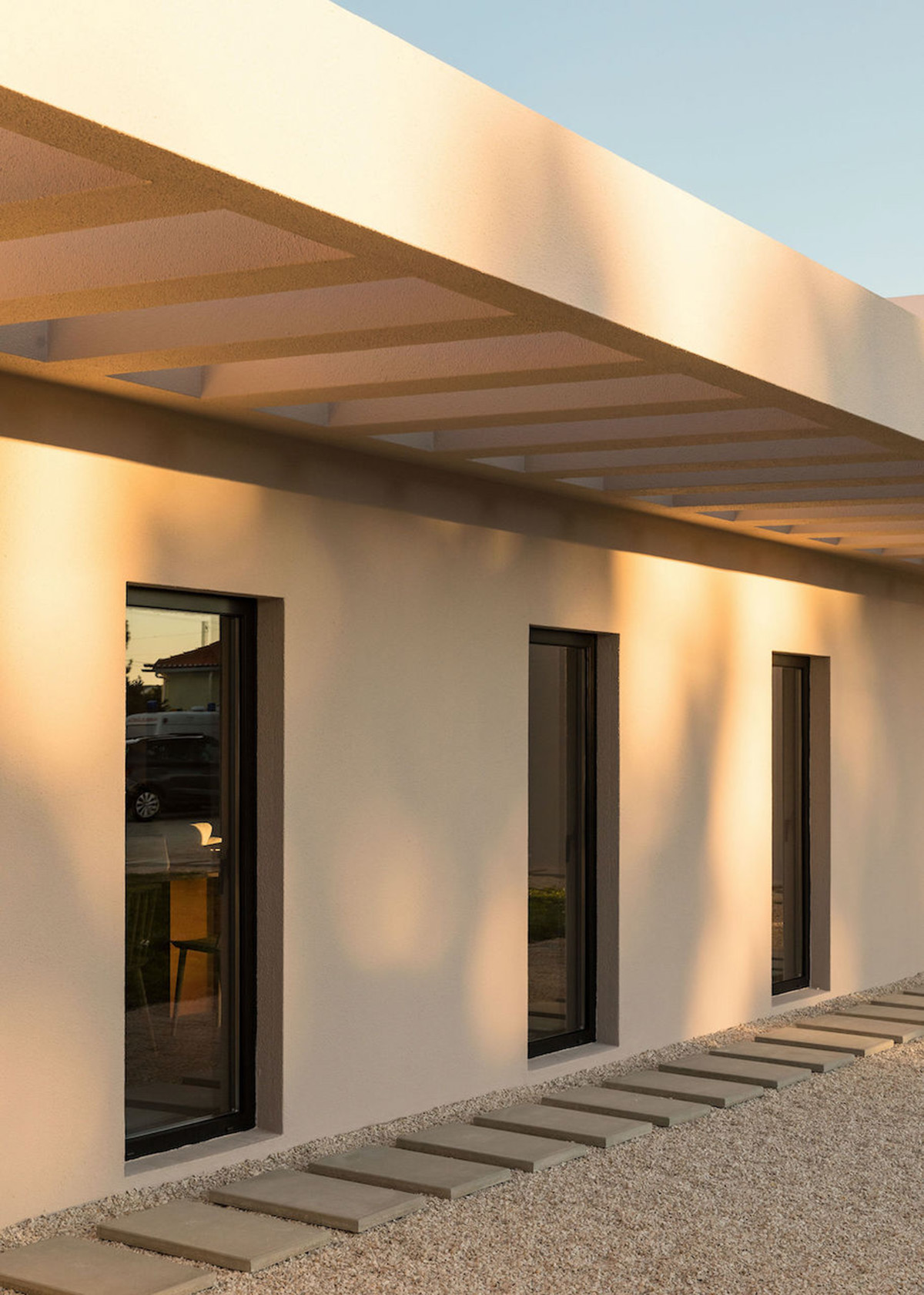 The master suite is notable for combining a living and working area in close proximity to the swimming pool, with a long white dressing room that includes a camouflaged access to a separate toilet and shower area. 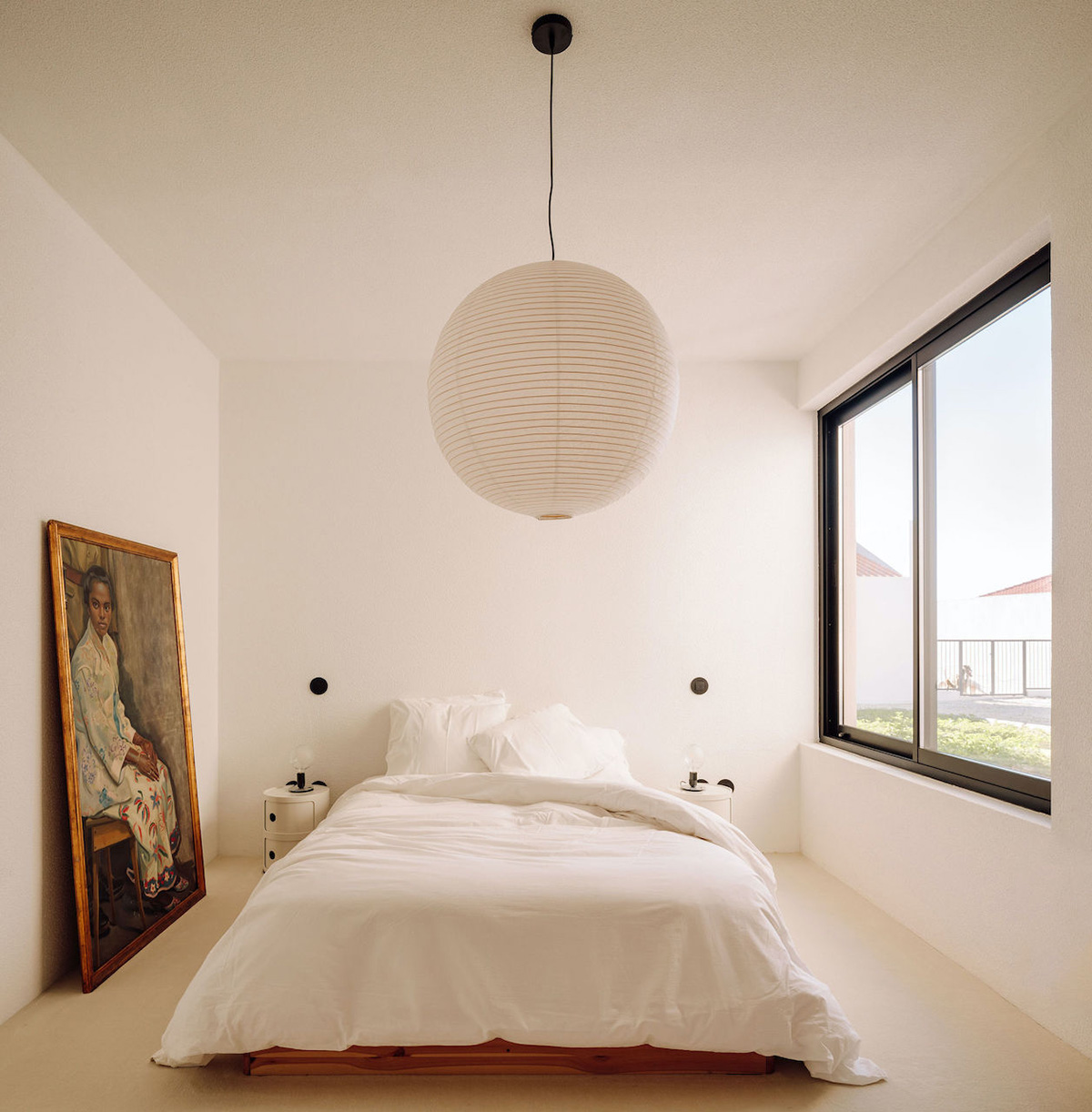 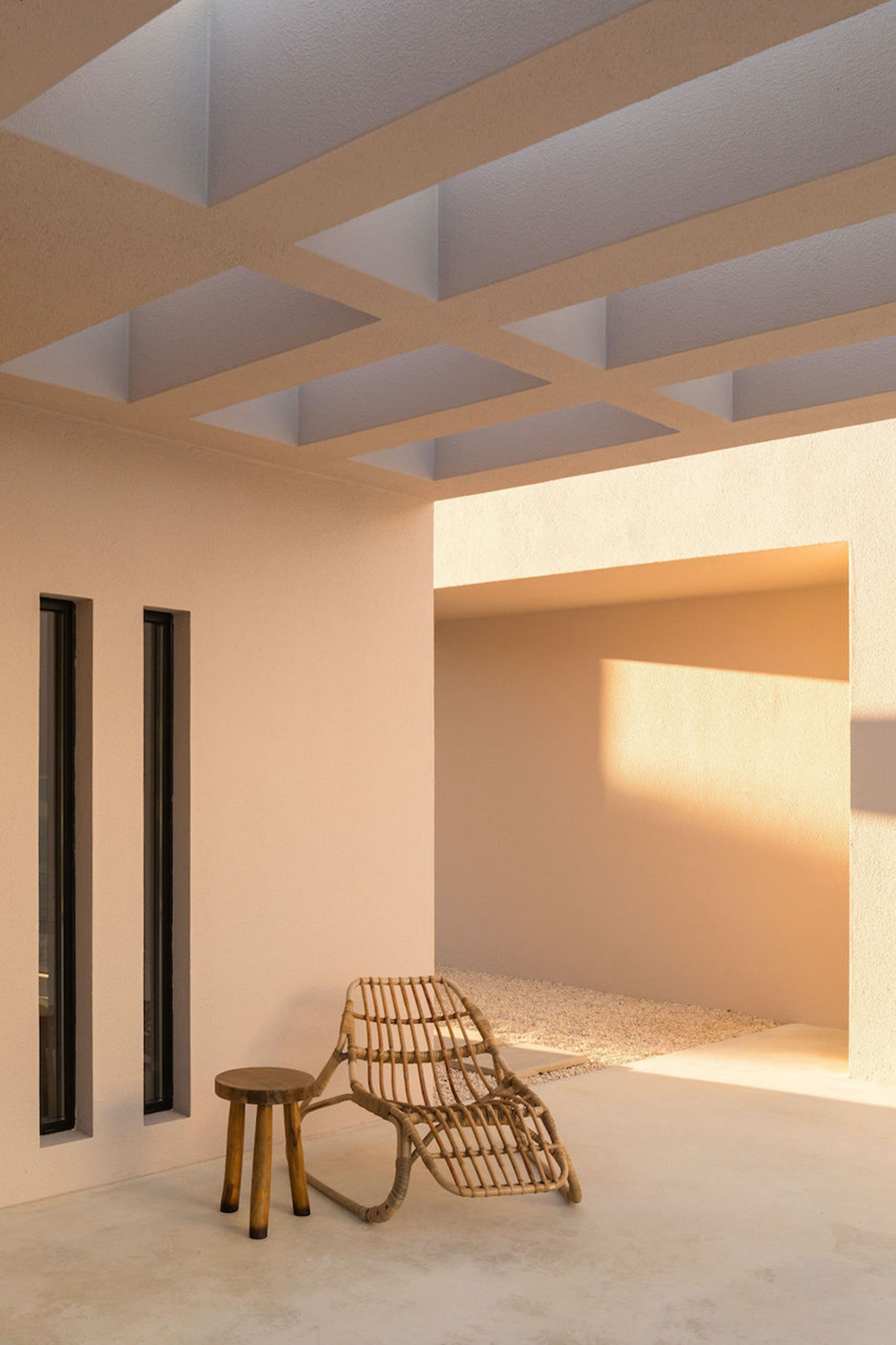 Continuous textured layers in the inside such as the beige and white of the walls or the cement on the floor followed a logic used for the exterior surfaces, providing a consisting awareness and offering a welcoming alluring experience into A Saramaga’s expanse. 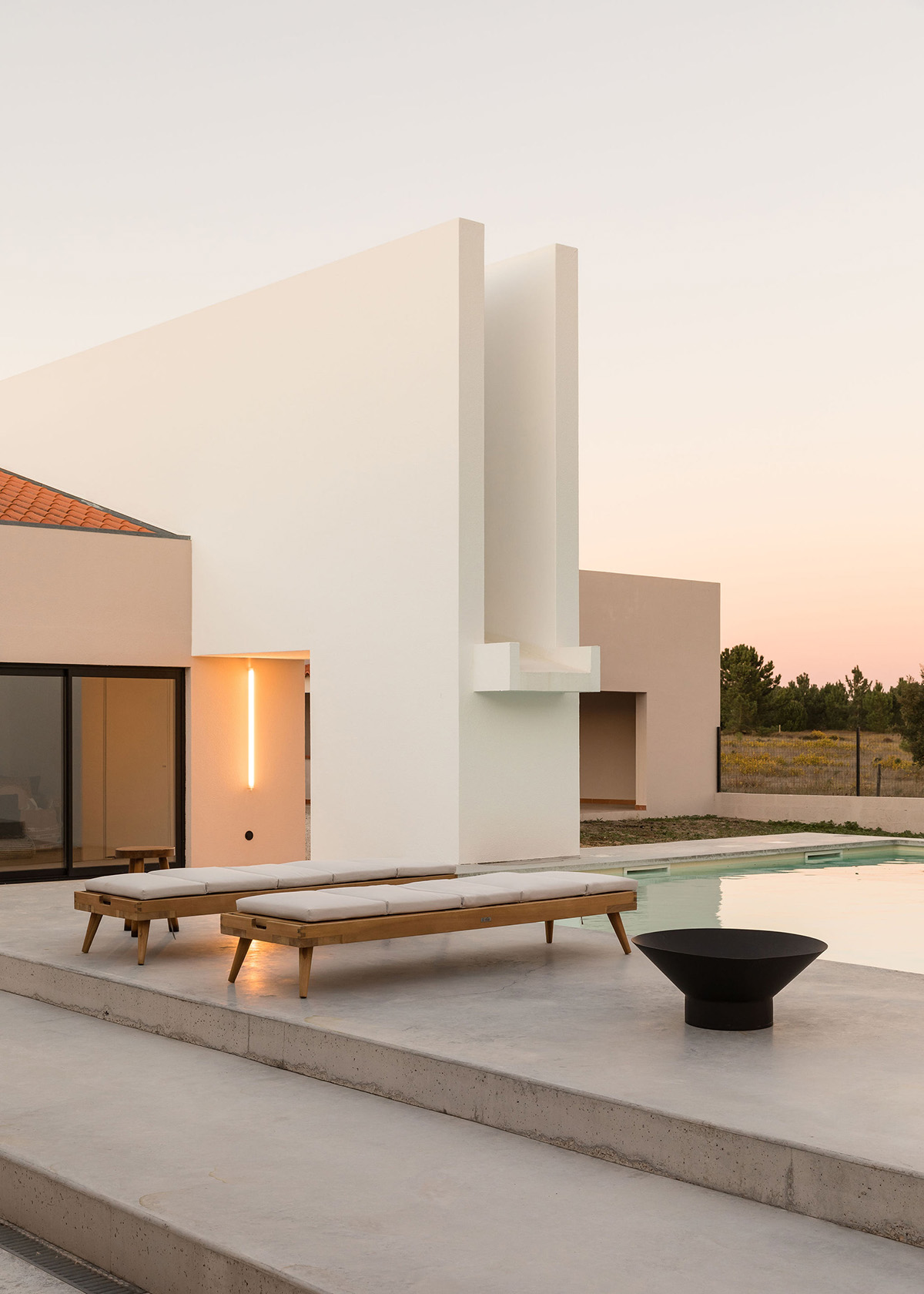 It is easy to imagine, as the owners stress their hopes that A Saramaga will be a source of life and constant rebirth. Lovely And tempting.

1. Saramaga AIR - Artists in Residence, will start this coming Summer hosting a project called POOL: PARTICULAS INSTÁVEIS, an initiative supported by I AM: PROJECTS, New York, an immersive residency on education and art.