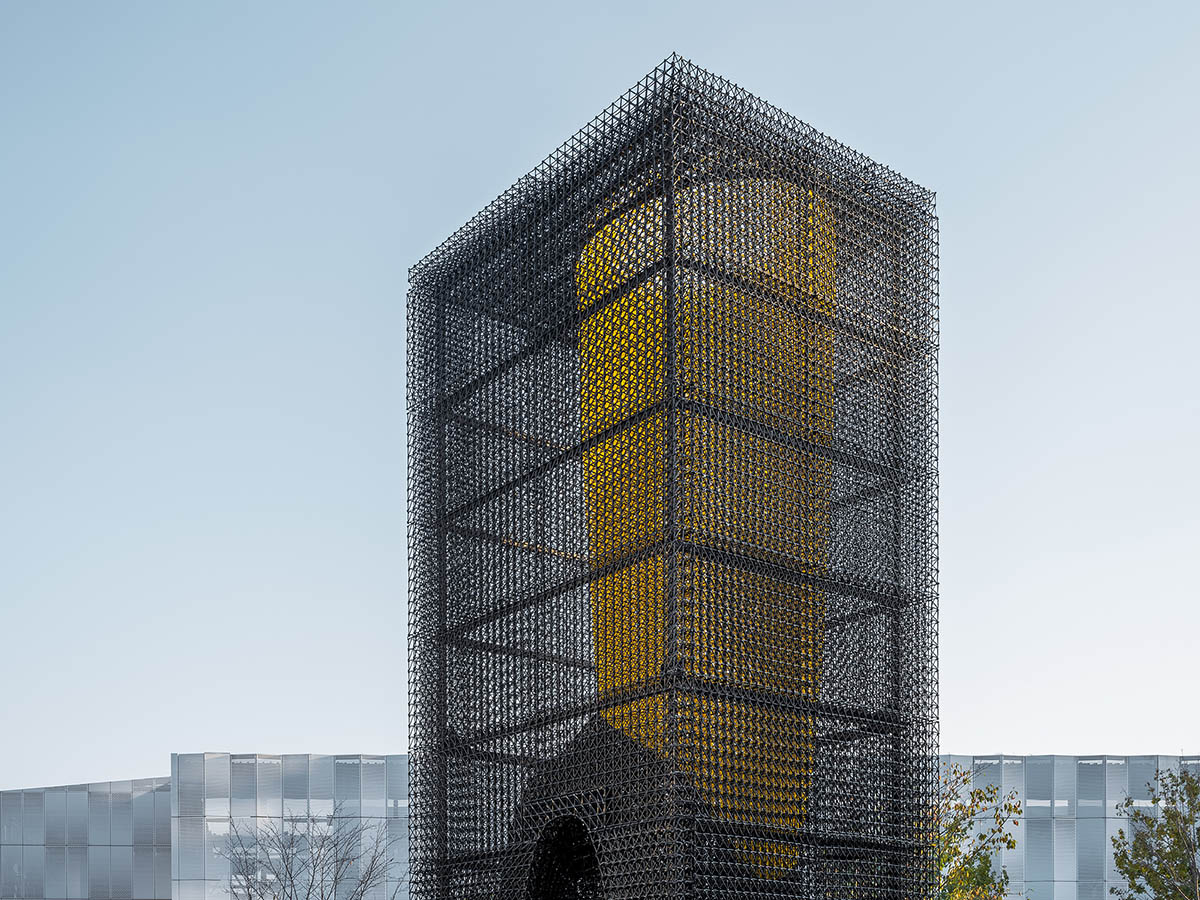 Named Arrival, the design was commissioned by TOPYS in collaboration with Roboticplus.AI to inaugurate a magical realism installation with 3D printing on the plaza.

Star Plaza is sandwiched between the back of The MixC and the north parking garage, with a subway entrance and exit on the square. The new installation is also an attempt of Wutopia Lab's project of reviving urban micro spaces. 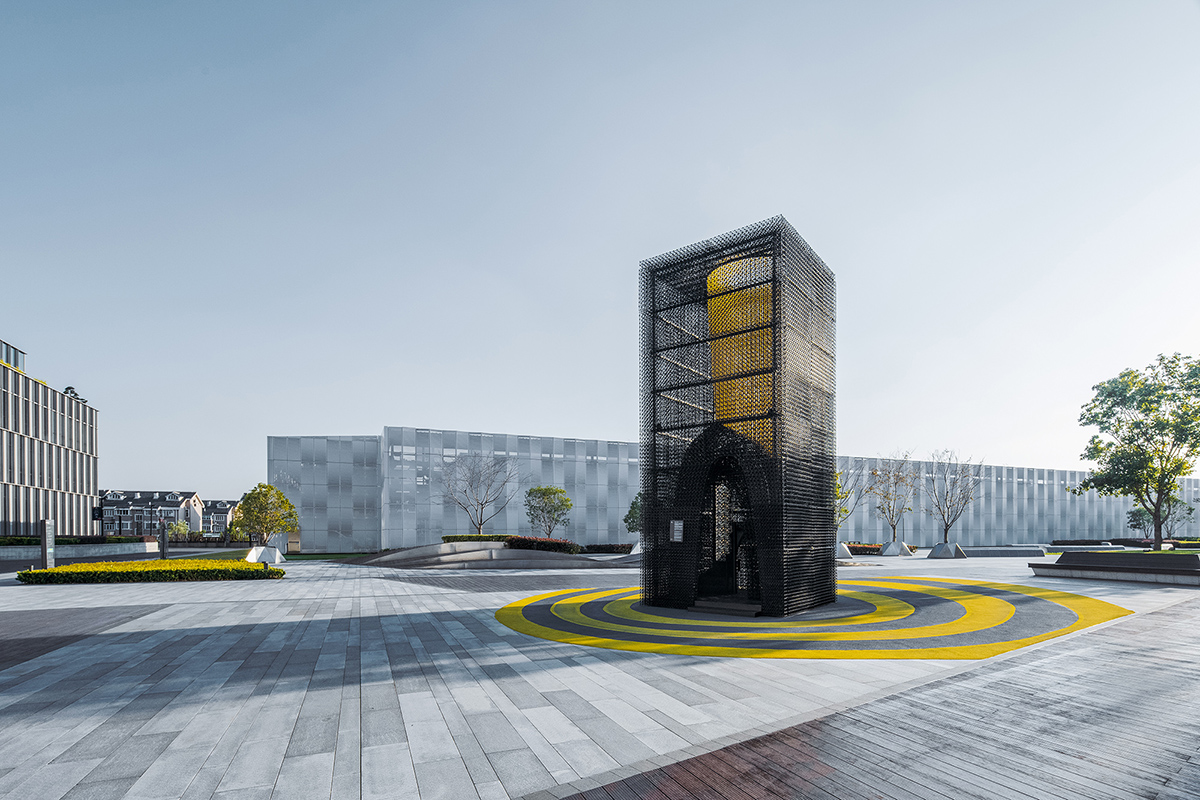 Turning into a purely traffic site, TOPYS wanted to invite Wutopia Lab to create an installation here that would activate sociality and activate the Star Plaza. Since there is a subway underneath the Star Plaza, the floor slab has a load capacity of only 3.5KN per square meter. TOPYS also wanted the social installation to be functional and indicative.

Read the project description with the words of the office. 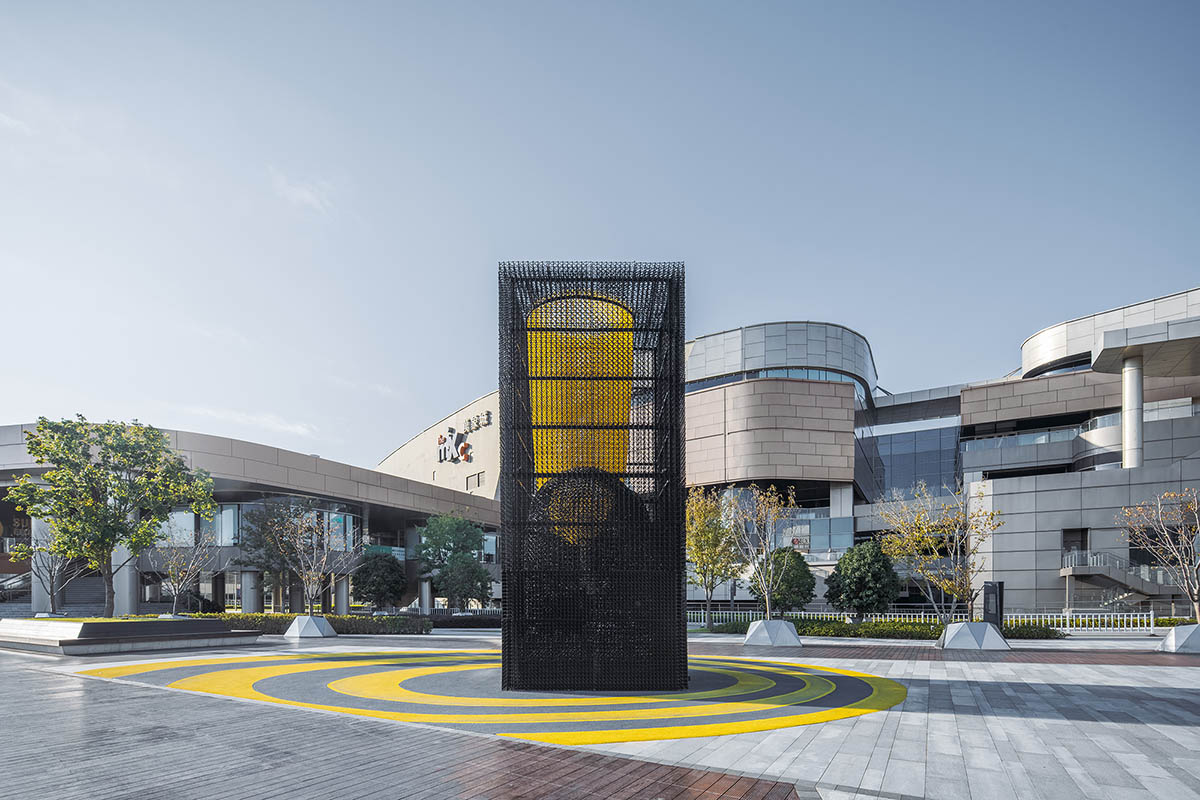 I stood in the middle of the Star Plaza and felt a little confused. The sense of place here stripped away everything I knew. The place was not Shanghai, it was as if I was standing in some vague location in any city, not even at that point in 2021. This feeling inspired me to explore some possibilities of futurism and science fiction. I decided to re-define an ambiguous site by implanting a definite Palladium in an ambiguous site in the manner of Marguerite or Roland Emmerich. It also had to have the maximum volume that the budget would allow, and in the uncertain daylight of Shanghai, black became my very choice. I decided to design a light huge black BDO. 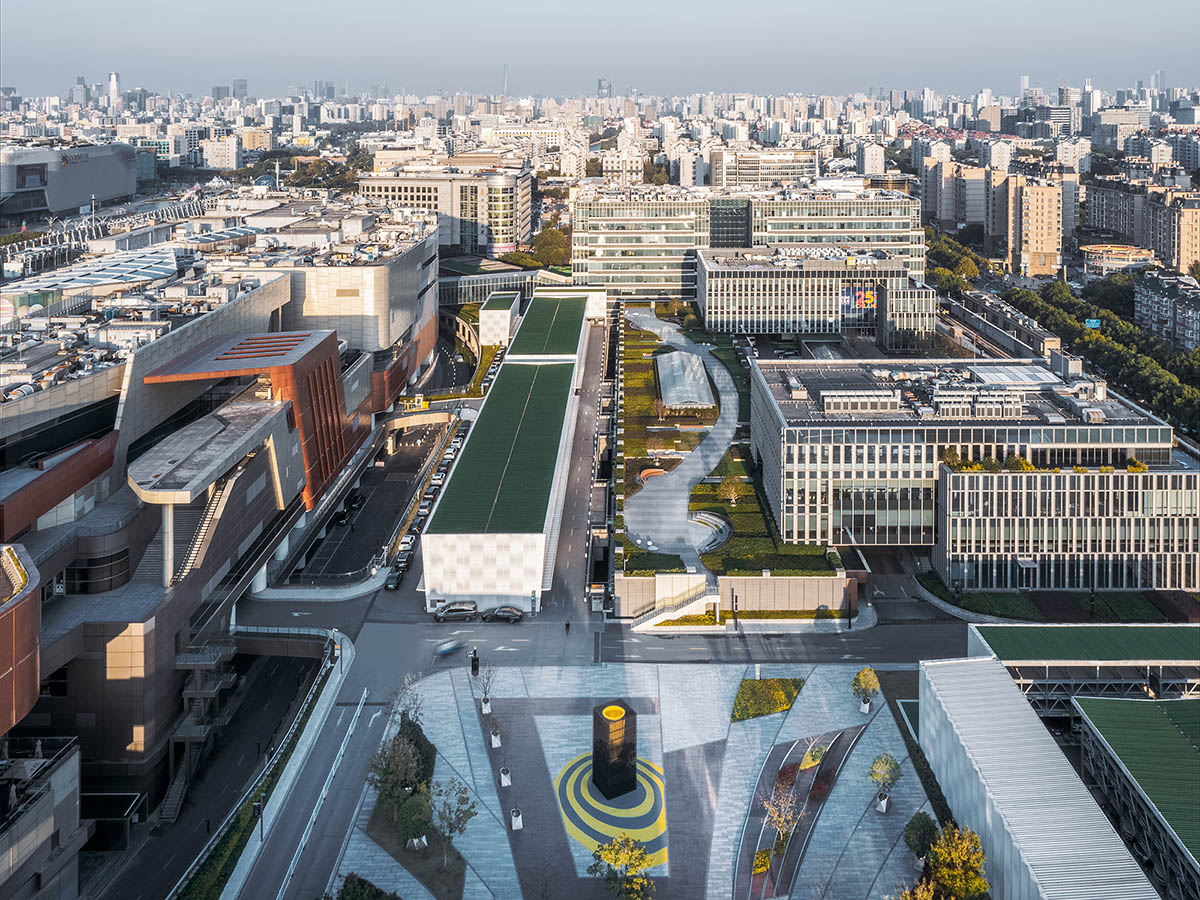 I contacted Roboticplus.AI and we thought that it was possible to create an extreme volume of 3*3*7 using 3D printing technology. The weight is only 650 kg (the same volume of water would be 63,000 kg). But being light can also be unstable. Roboticplus.AI has been calculated to join the steel structure (and also the stairs) to stabilize the base, the total weight ends up being two tons. It meets the requirement that a floor of 9 square meters can only withstand 3.15 tons. So it was agreed to 3D print an ABS black BDO with a robot. I call it Arrival.

"You know I've had my head tilted up to the stars for as long as I can remember. You know what surprised me the most? It wasn't meeting them. It was meeting you" - Arrival. 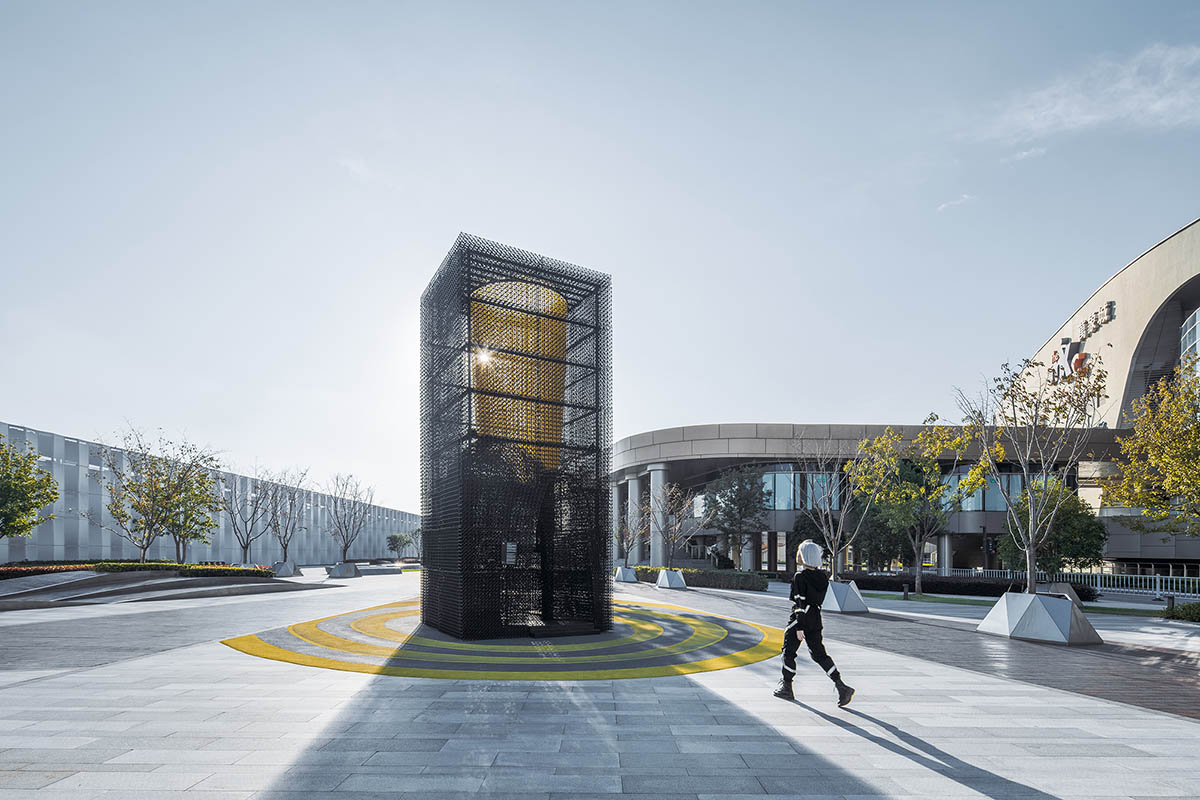 The Arrival of BDO

Arriving on the square, the black BDO is a symbolist installation that is simultaneously an expression of divinity and humanity. Inside the silent black rectangular body is an abstract karst cave that you need to explore, climb and then see a yellow sinkhole from where the sun shines over your head, and you will be in a moment of trance and contemplate the meaning of your existence in this busy city. At this moment, the black BDO that descends is the sacred space of this secular city. 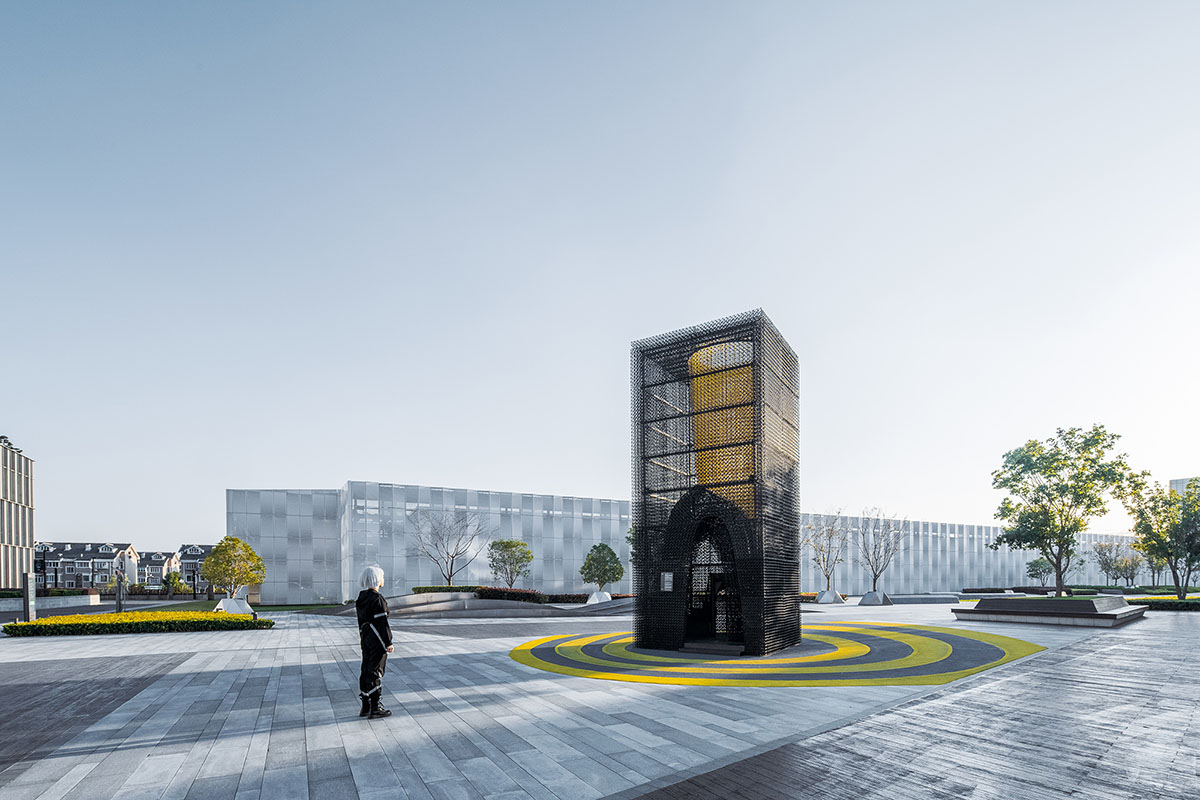 Interestingly, the black rectangular body can be decomposed again, and the yellow color hidden inside will be peeled out and shine. The disintegrated body is not strictly limited to a secular place, and the joy of the human world floats in this temporarily limited place. The disintegrating black obelisk is the space of desire in this secular city.

The interior of the black BDO is inspired by the book "Underland", while the exterior is inspired by the Stargate, a tool that allows us to briefly arrive at a retreat from reality as a result. It is 3D printed and seems to be made by a human being, but in fact, it is and is not really out of human hands. The important thing is that its arrival will activate a communal space on the edge. 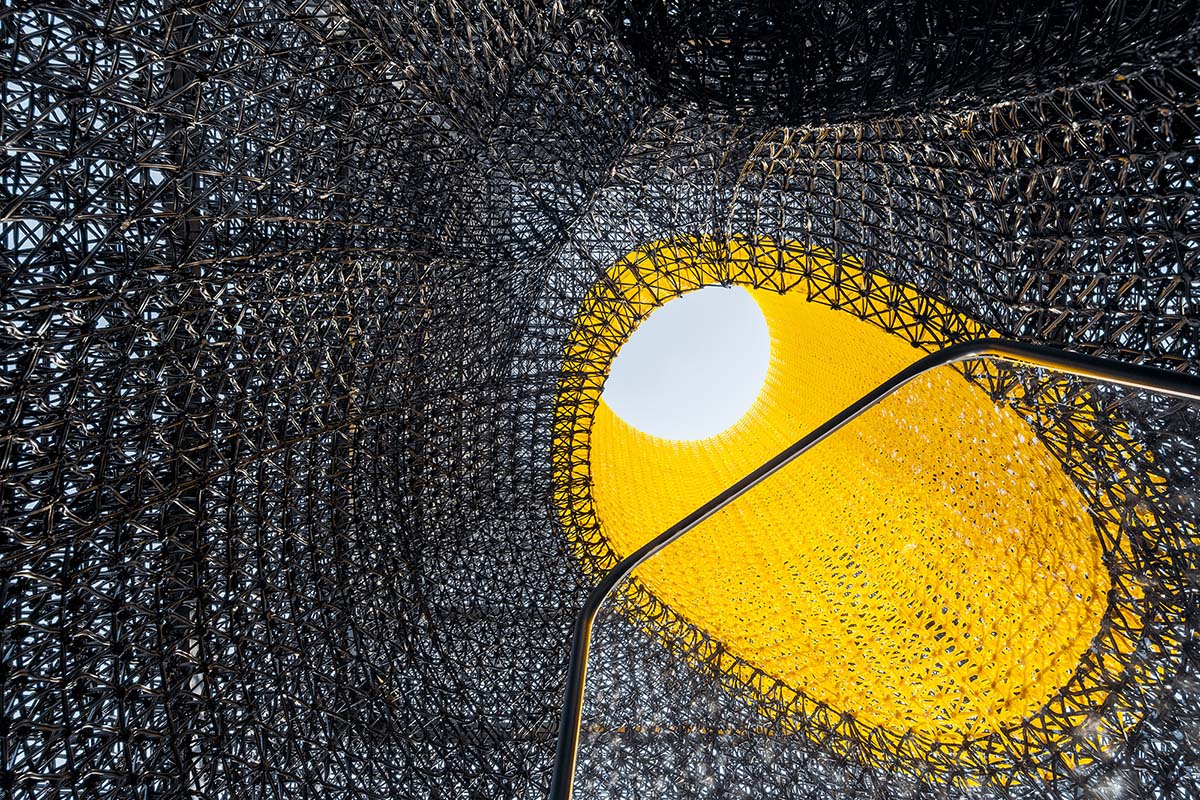 Arrival is 3D printed by the ROBIM platform that connects the design side and the factory side through Roboticplus.AI to achieve design-build interconnection, combining parametric design and space printing digital construction technology. The so-called space printing technology is also different from traditional FDM printing, which can quickly produce shaped spatial volumes. 3D printing technology is an additive manufacturing technology to achieve freeform. Among them, the short curing performance of the printing material is the basis for realizing spatial printing. 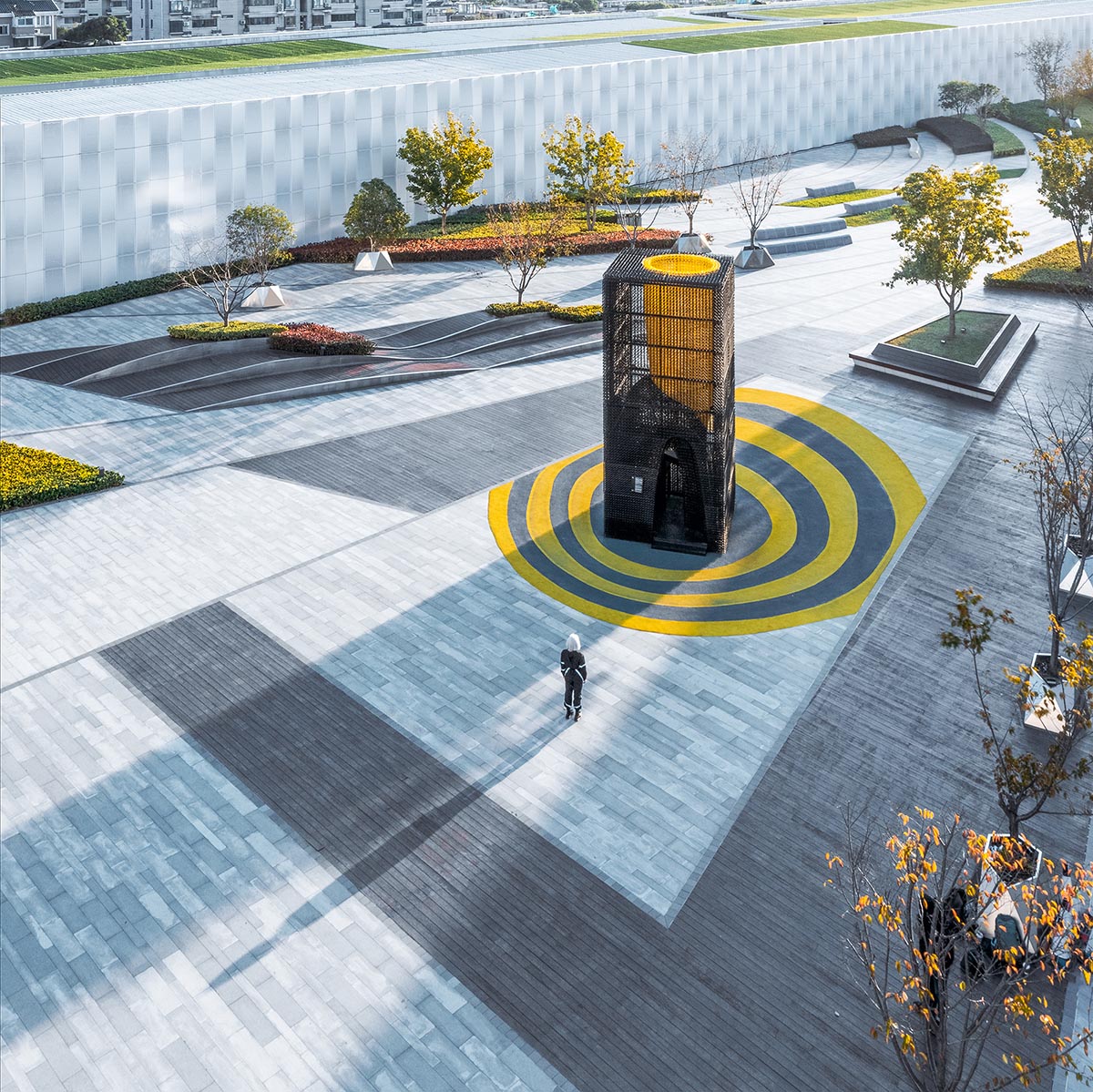 The flexible robotic arm draws a preset shape in the air and instantly cools and solidifies it to get the spatial structure. The production also gives full play to the broad degrees of freedom of the six-axis robotic arm to maximize the most efficient production size, and cloud-based order production files and unmanned automated production.

The final factory took 1.5 months to print the BDO in modified acrylonitrile butadiene styrene (ABS), which took a week to install on site.

"The unknown future rolls toward us. I face it, for the first time, with a sense of hope. Because if a machine, a Terminator, can learn the value of human life, maybe we can too" - Terminator 2. 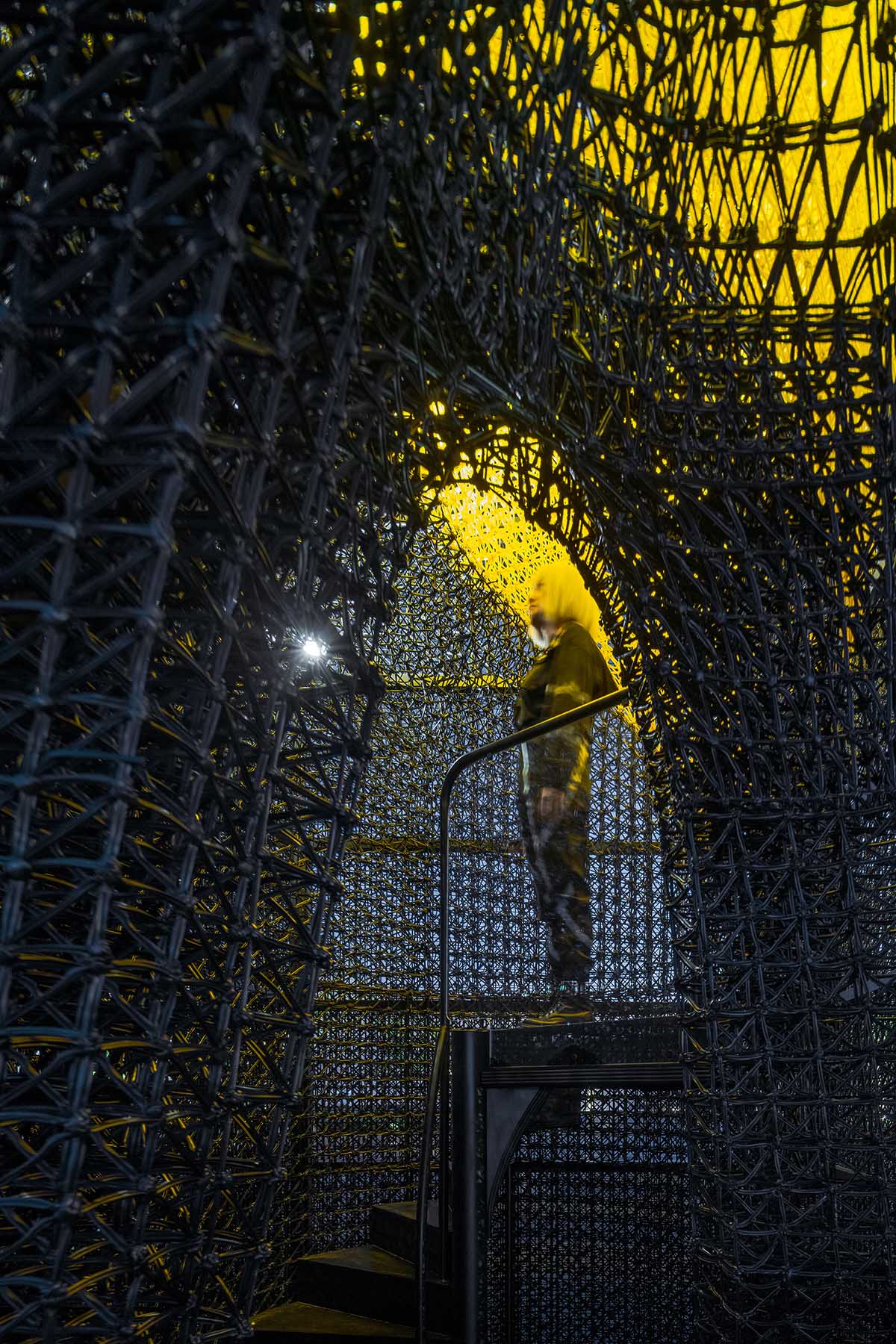 The braiding ABS finally creates a translucent black BDO. Yellow sinkhole faintly visible in the daylight. At night it looks like a giant lantern again. This silent installation expresses all the messages and ideas that the architects wanted to convey to the city and its inhabitants in a theatrical language like a mime. It is a temporary urban monument about the future that can be accessed.

"A vision... of the universe, that tells us, undeniably, how tiny, and insignificant and how... rare, and precious we all are! A vision that tells us that we belong to something that is greater than ourselves, that we are *not*, that none of us are alone!" - Contact. 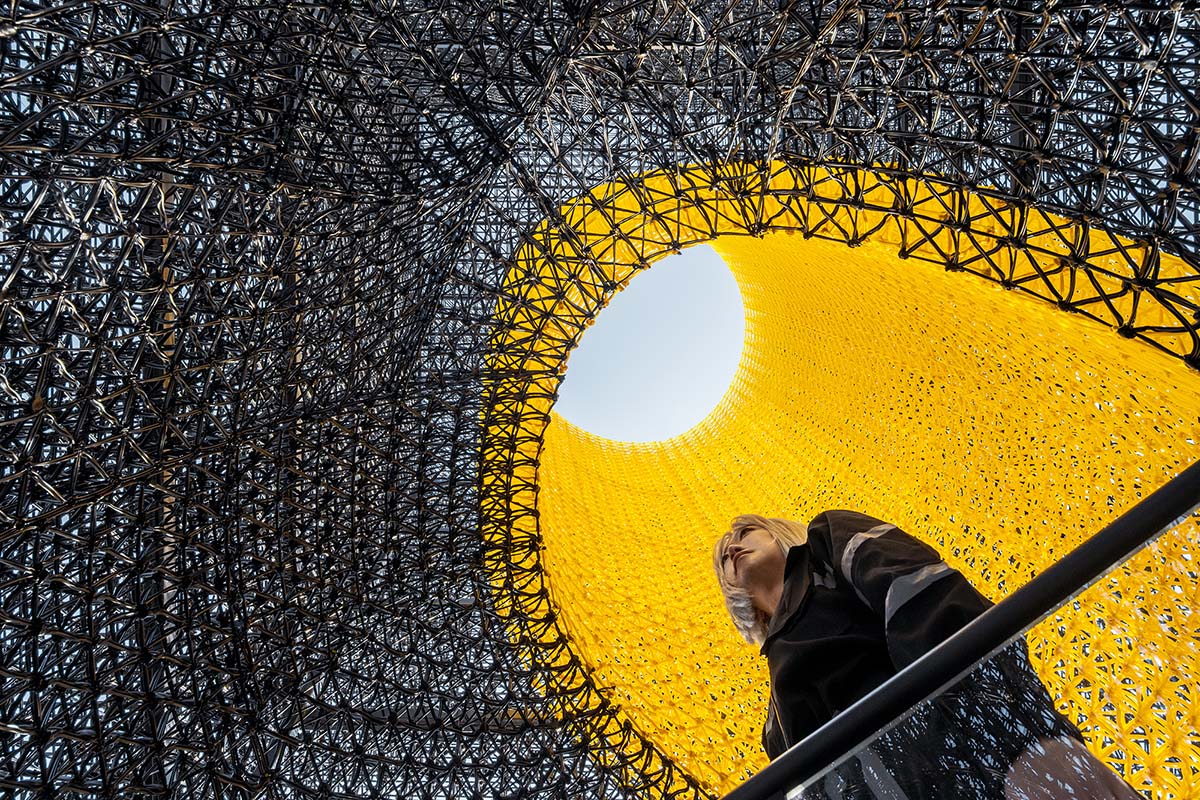 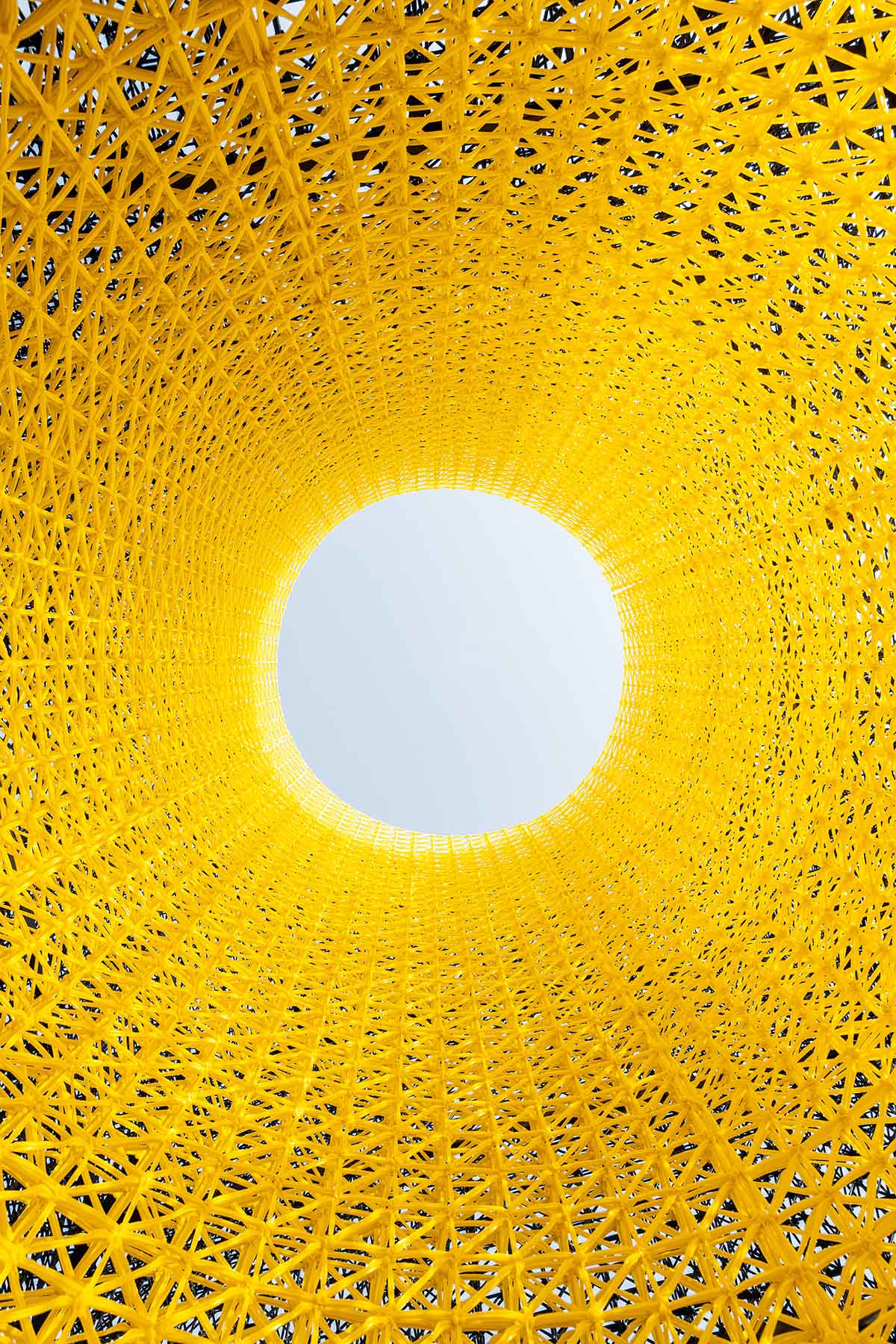 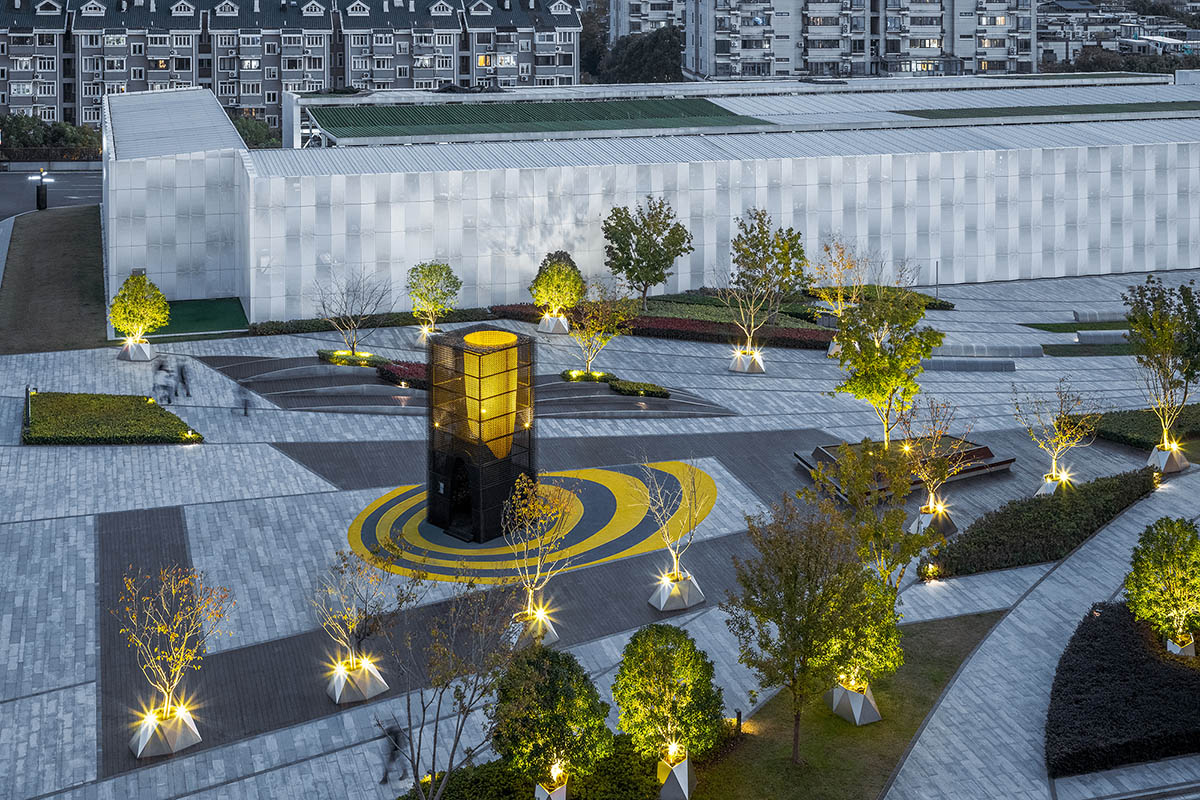 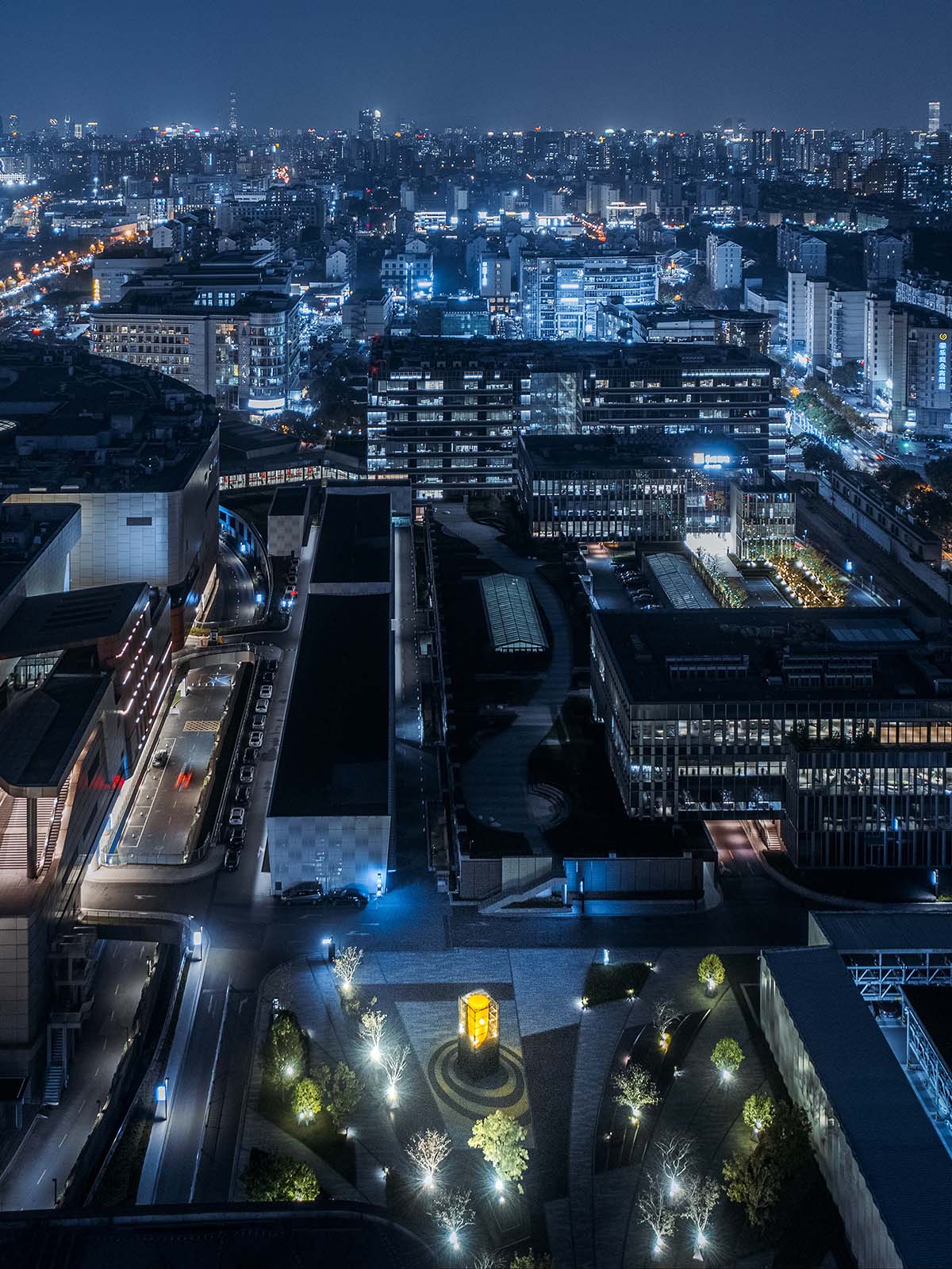 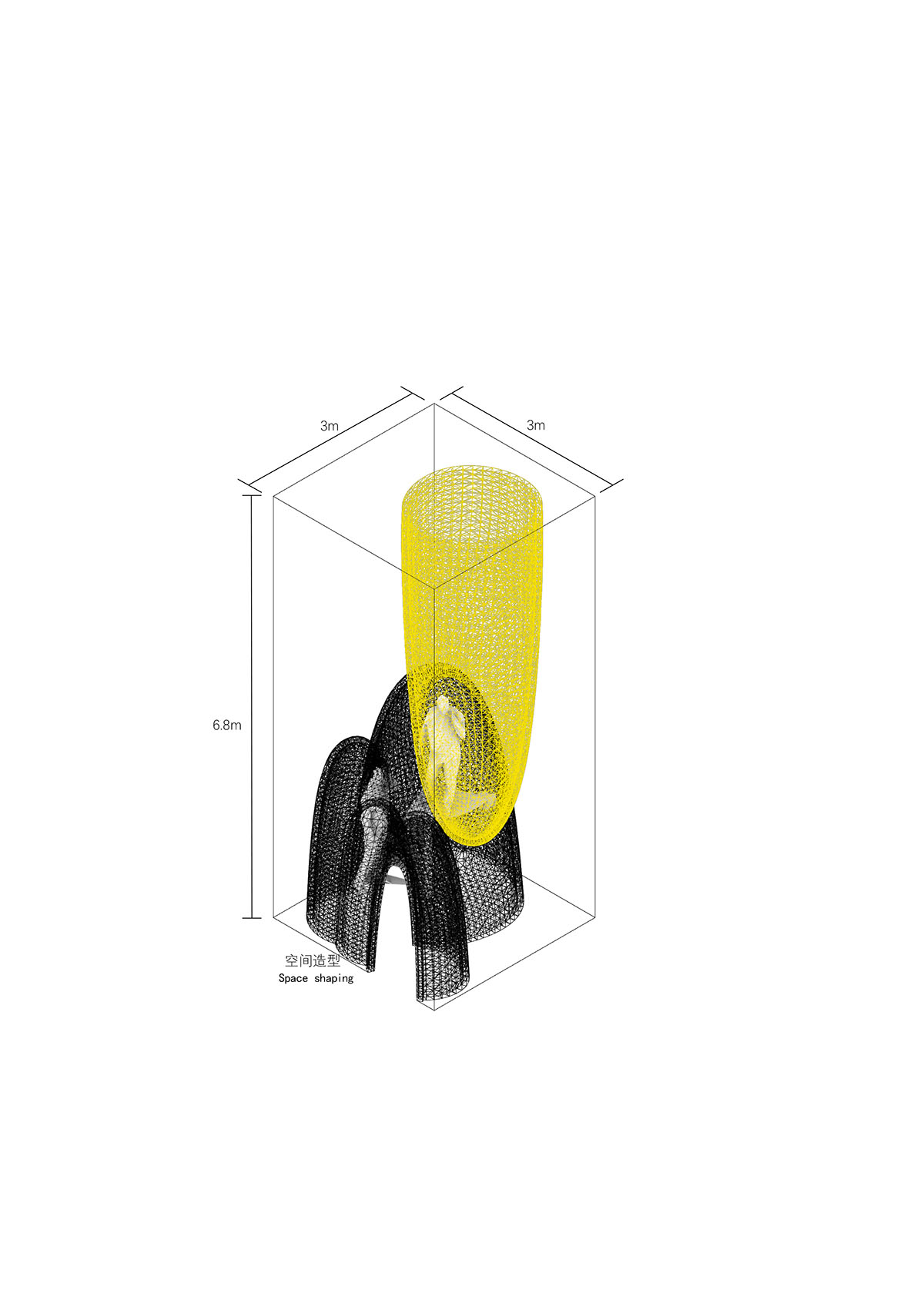 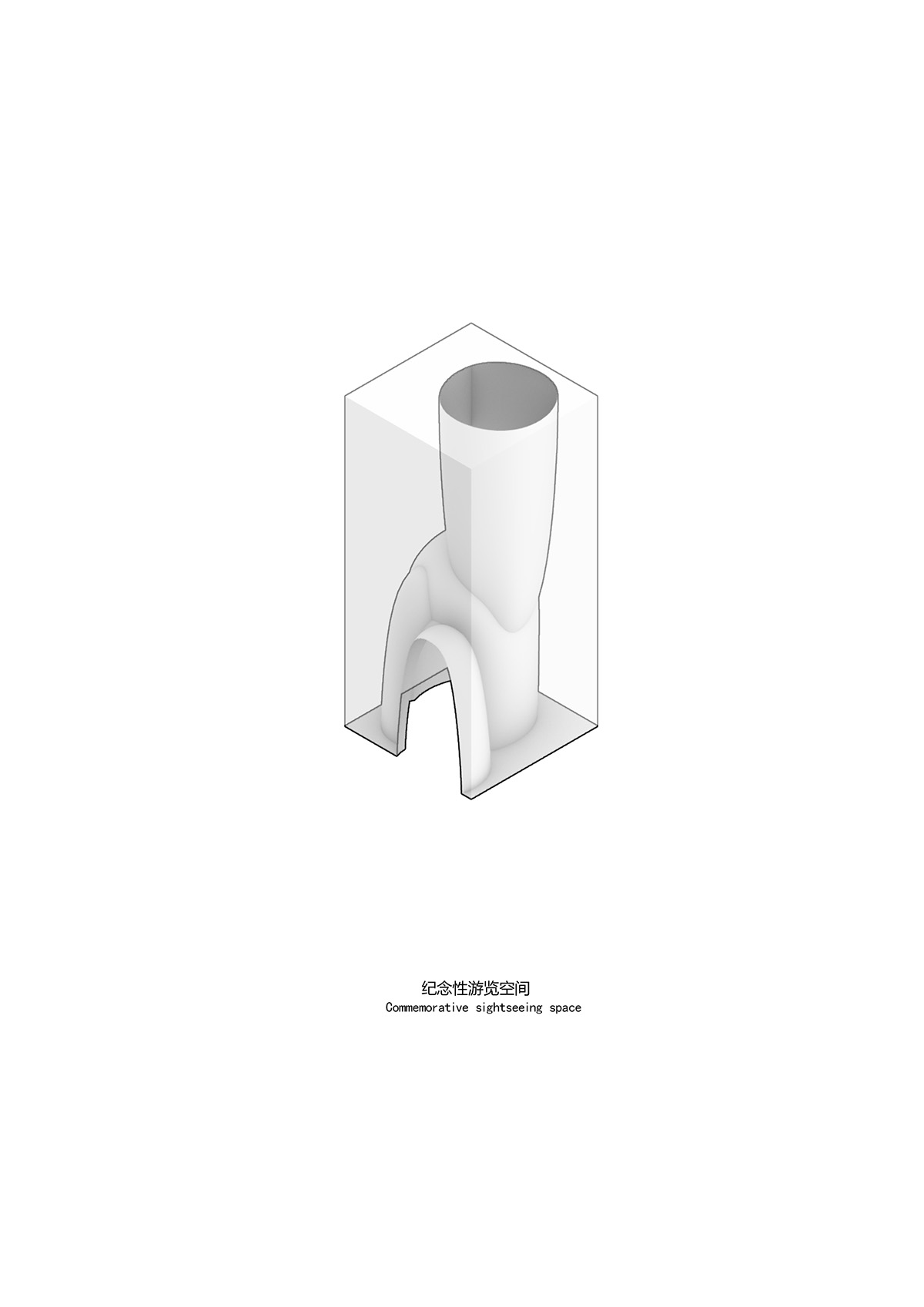