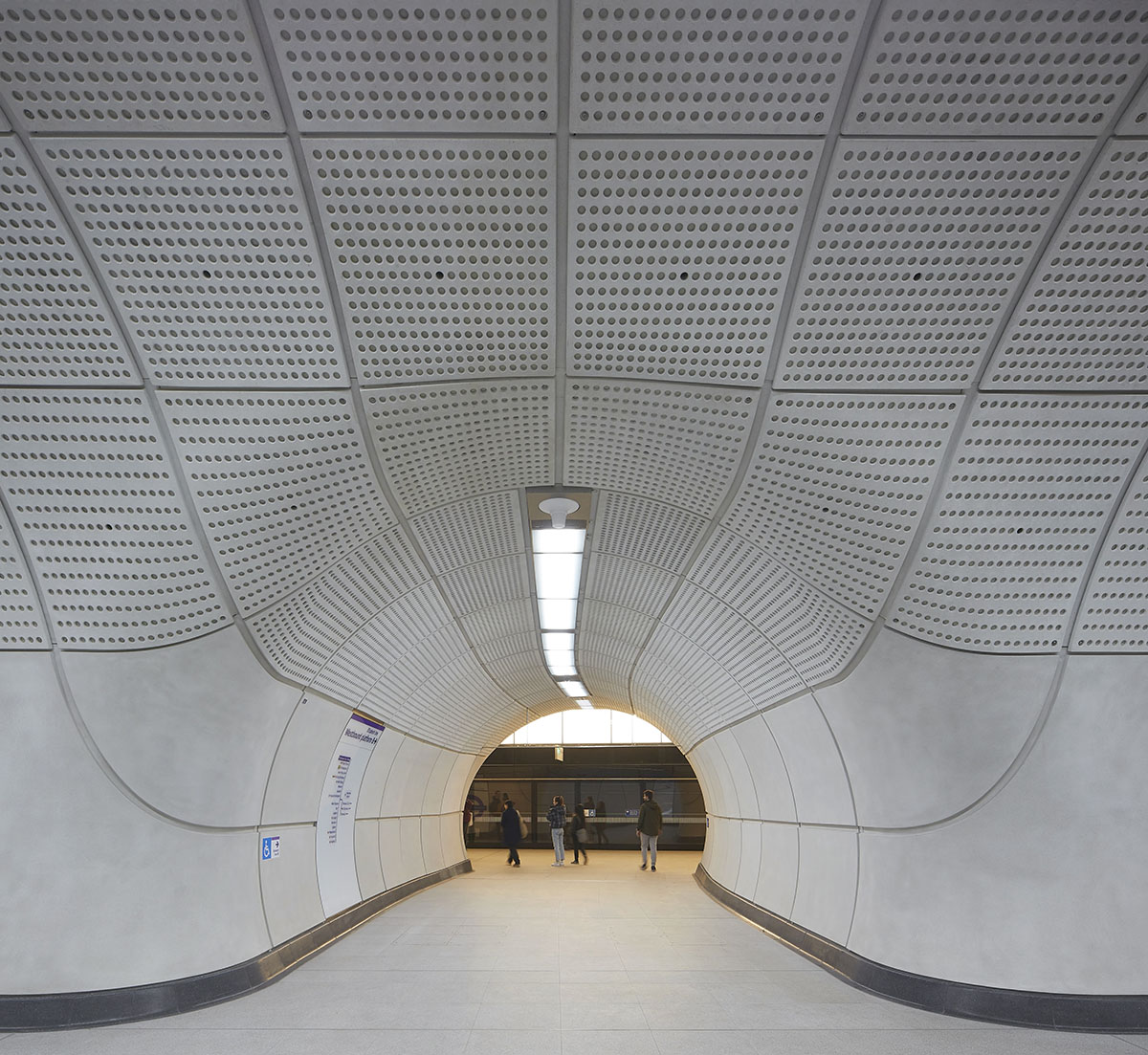 Grimshaw has completed a new railway in London with sinuous surfaces, fluid and curved junctions in the passenger tunnels.

Officially opened on 24 May, the project, named The Elizabeth Line, was completed as part of the London Underground network and becomes London’s newest railway.

The Elizabeth Line is estimated to ultimately carry 200 million passengers per year, increasing the capacity of London’s underground railway network by 10 per cent. 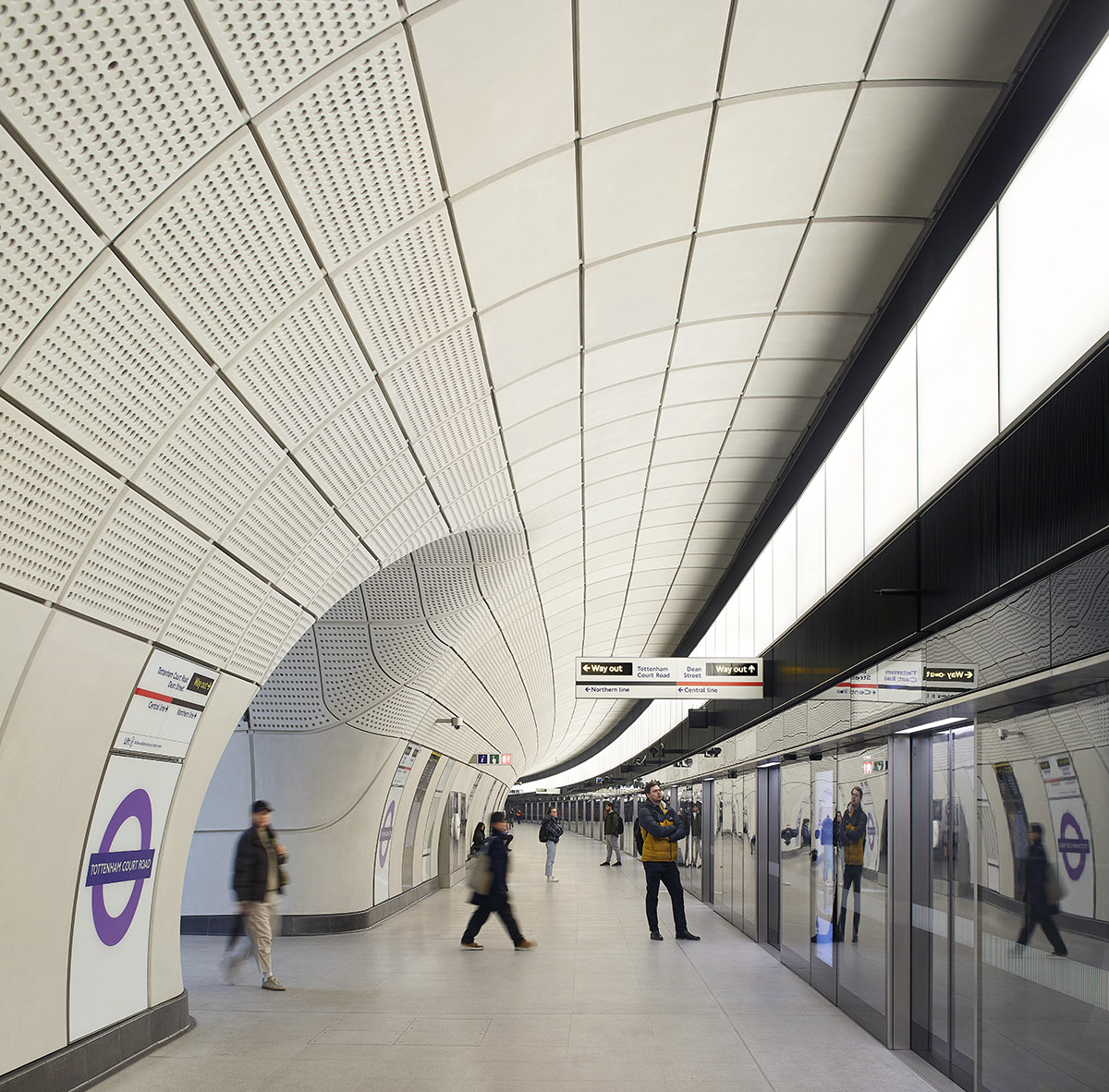 Platforms, passenger tunnels, escalators and station concourses, including signage, bespoke furniture, fittings, finishes, and technology are defining "family of elements" of the project.

For design, Grimshaw takes cues from the engineering feat – the complexity and scale - of the Elizabeth line - combining design properties with high-level of technology. 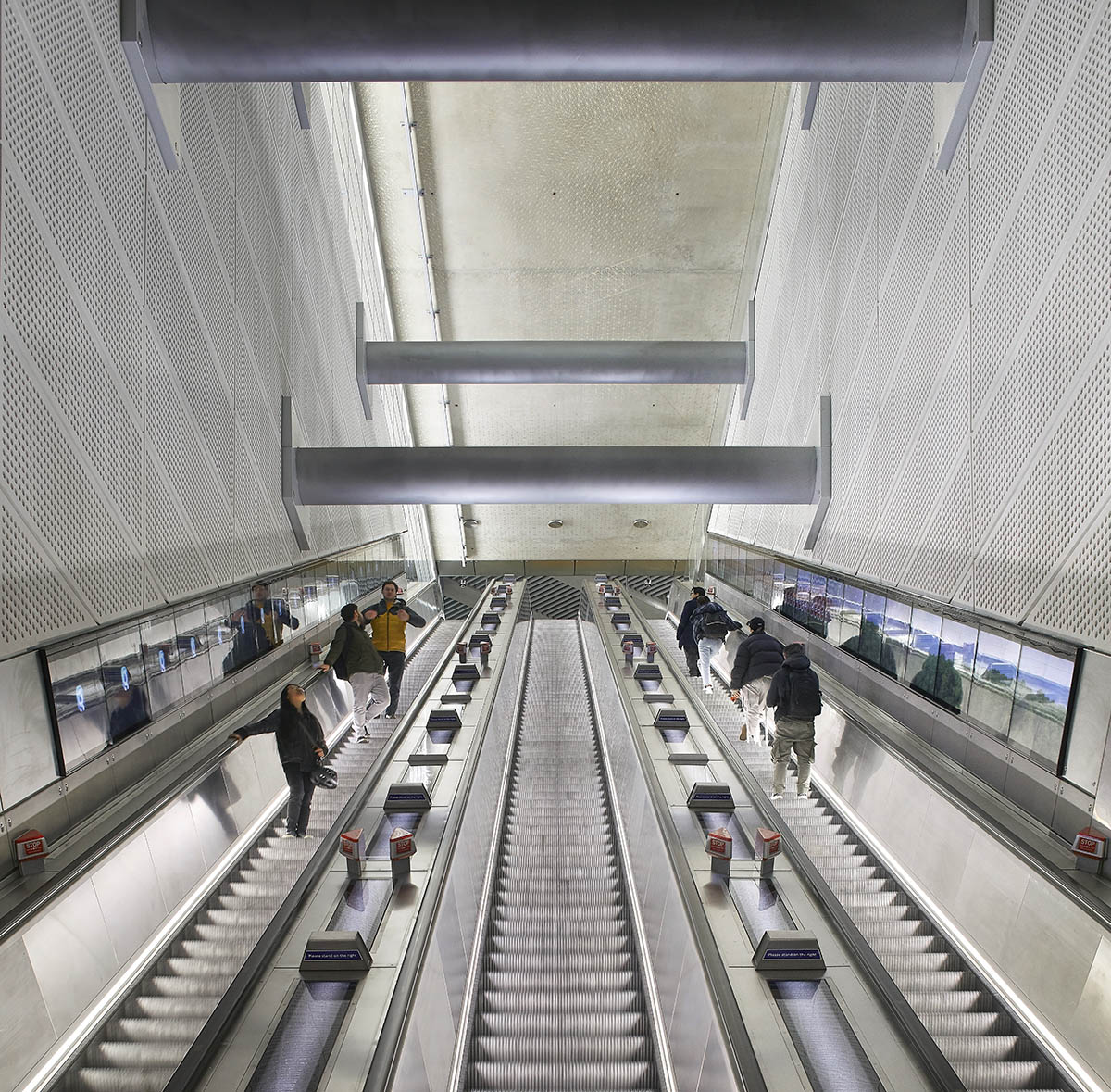 "Seven million tonnes of soil was excavated to dig the tunnels for the 42 km of tunnels that house the ten new, fully accessible stations," said Grimshaw in a project description.

"Each of these new central stations sit alongside and below existing London Underground stations, and are almost double the length and height." 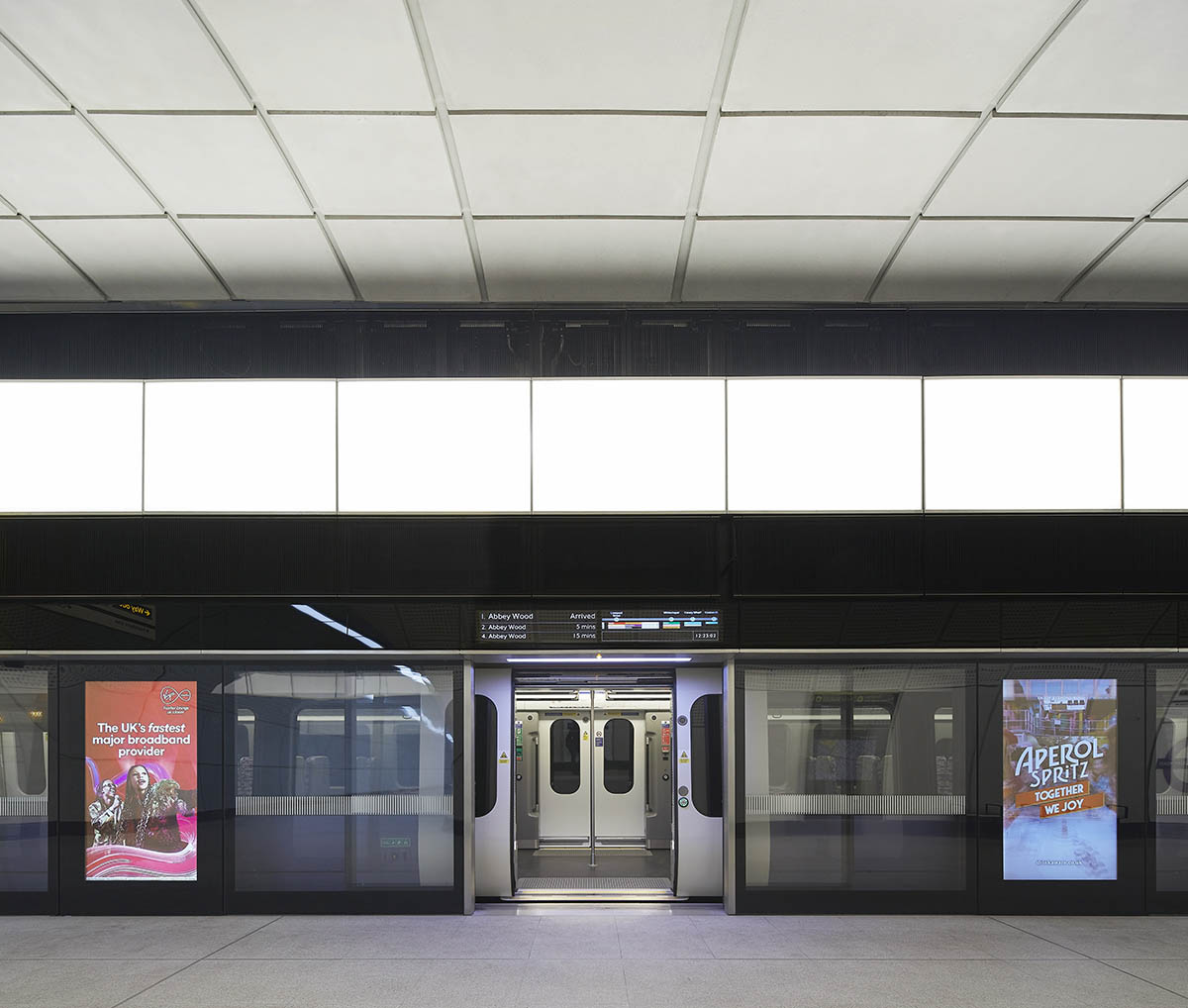 The firm used sprayed concrete to define structural lining on these vast passenger tunnels and platforms, which helped to increase the opportunity to express the scale and create a fluid language of the spaces.

This is exemplified in the curved junctions of the tunnels – opening up sightlines, alleviating the underground experience and improving passenger flow and safety.

"Glass fibre reinforced concrete (GFRC) for the cladding system effectively ‘shrink wraps’ this structure, sitting tightly against it with a neutral finish that allows the volume of the spaces to lift and the journey to feel composed in what is a busy, constantly active environment," the practice added.

The firm also made signage, advertising and technology as an integral part of the whole system, bringing a further clarity – decluttering – to the spaces.

With this project, the firm made the length and height of standard London Underground stations double. 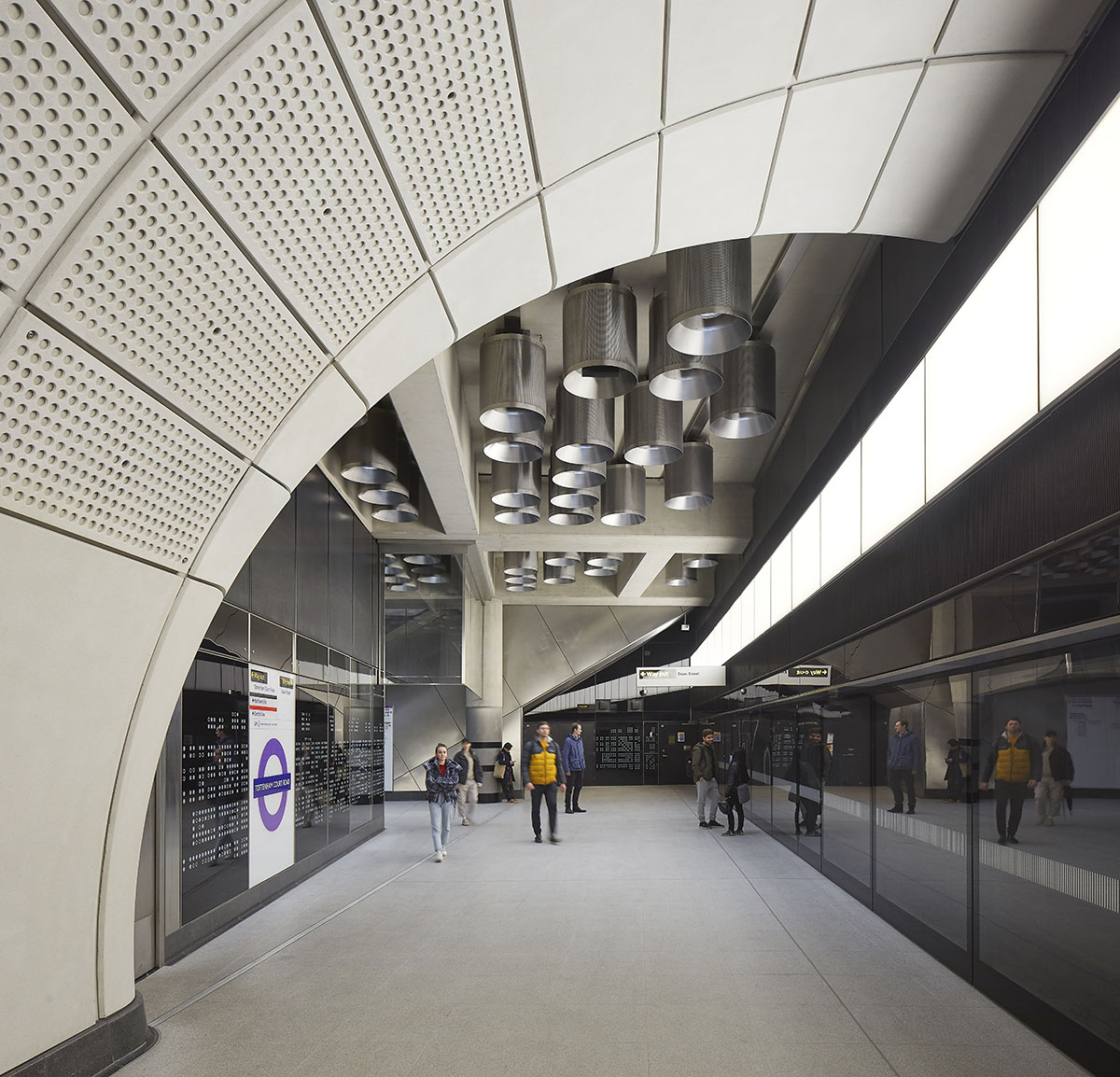 Adding cool lighting features inside, they characterise the active, passing spaces of the passenger tunnels and a diffused, warmer lighting, which are all integrated into the platform edge screens and throwing light down and onto the GRFC cladding, creating the calmer, dwell spaces of the platforms. 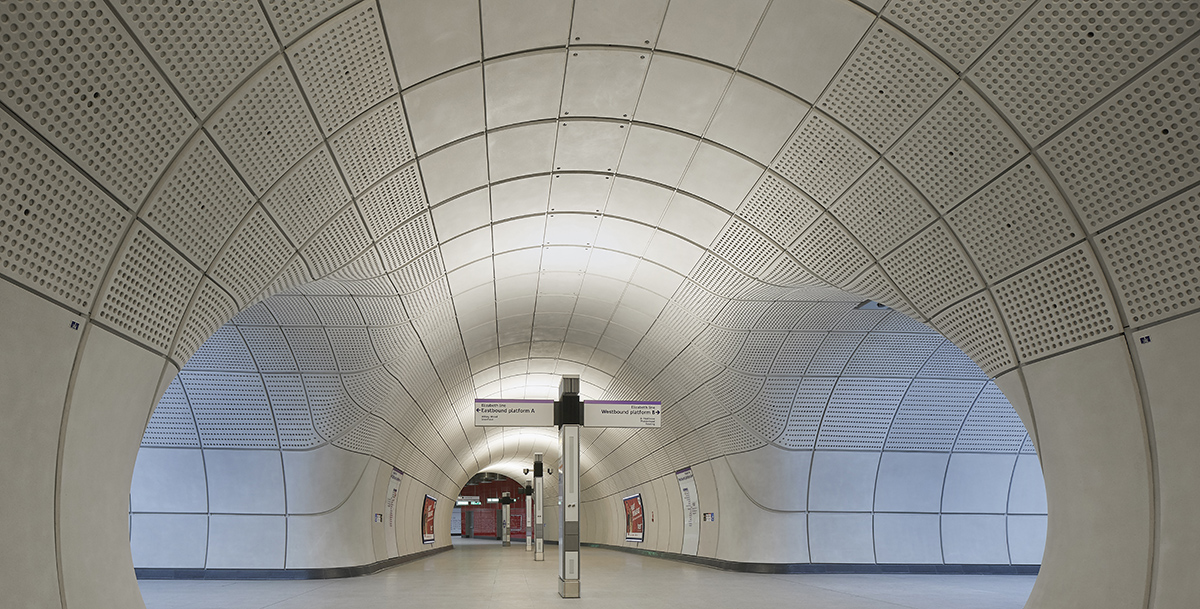 Taking the passenger experience into the core of design, the platforms span 240-metre long walkways, while the cladding system enables integration and simplification of the signage.

Grimshaw prioritize wayfinding, directions to onward journeys on the back wall of the platform, while facing the tracks, as passengers wait for their train.

In addition, digital advertising is designed within the platform edge screens, alongside the train arrival information.

The firm adds a zoning information throughout the tunnels with the wayfinding totems guiding and defining routes. 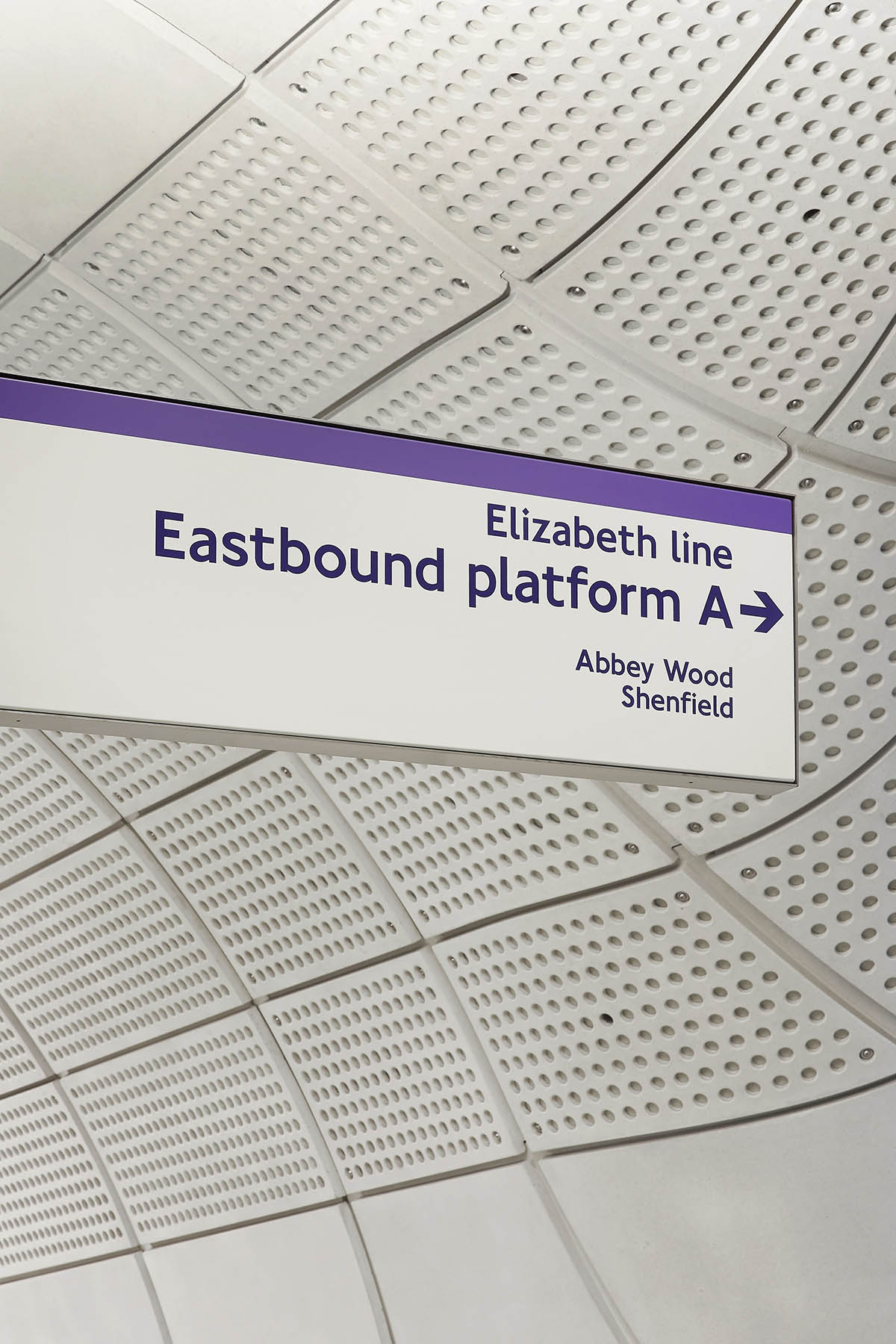 "The bespoke totems bring together low-level lighting, wayfinding, security cameras and speakers, all designed with ease of access for maintenance and replacement, and further contribute to the open, mannered, and consistent experience," the firm added.

The studio divides "family of elements" into two distinct design languages: the long-life architectural elements – such as the tunnel cladding and flooring, and the shorter life technology elements such as the totems.

"London has a long history of line-wide design which has always been about creating a common thread to the passenger experience across our dense, highly populated city and our design strategy for the Elizabeth line is no different," said Neill McClements, Partner, Grimshaw.

"Working with Crossrail and the whole design team the line-wide design strategy has delivered a seemingly effortless travel environment that is intuitive, accessible, safe, and enjoyable," McClements added. 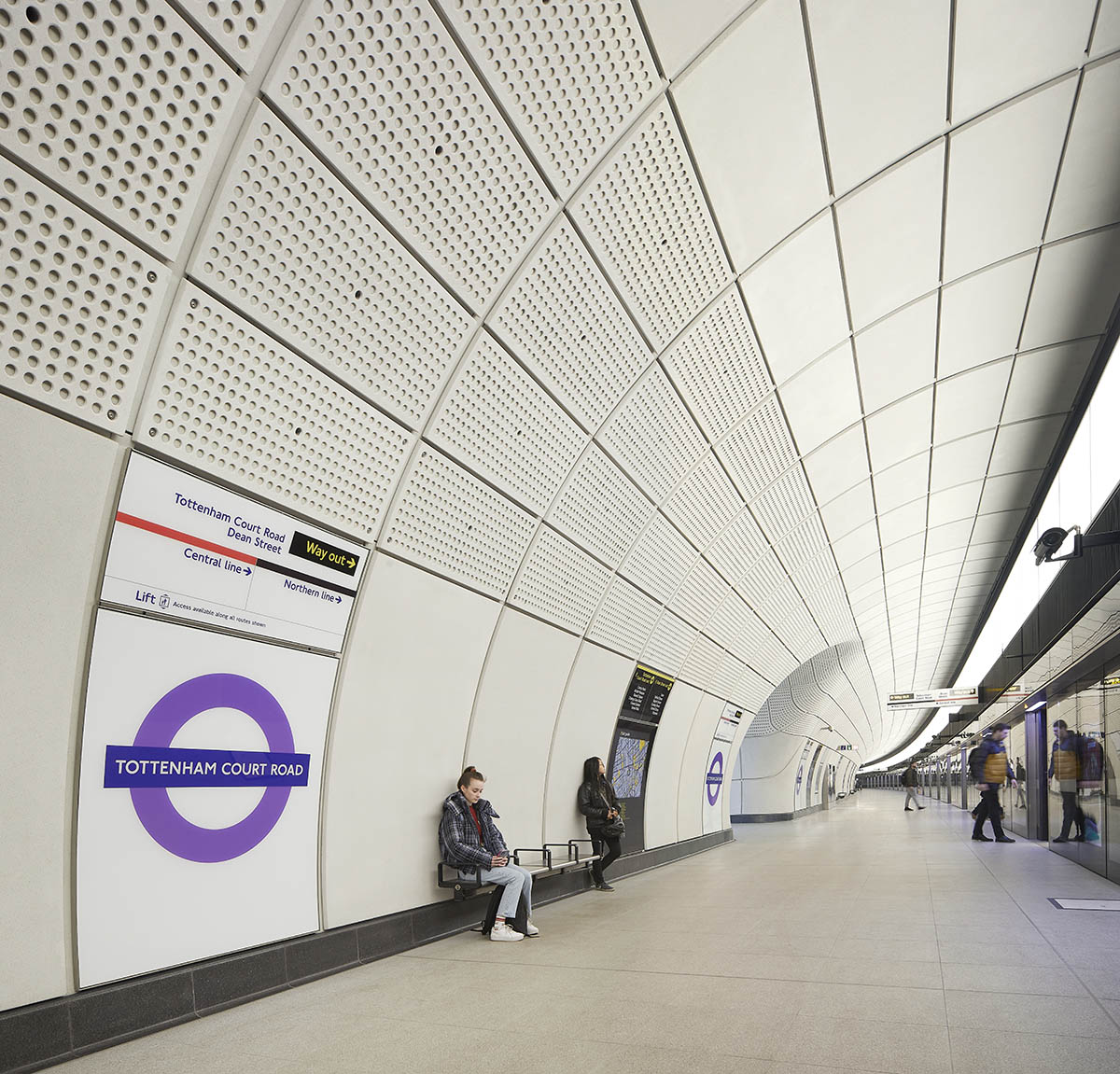 The form and muted neutral colour palette are defined by the GFRC cladding which is also supported by a lighting strategy. This softens the vast spaces and transitions that passengers experience across the journey from below to above ground.

The interior cladding features perforations to serve both form and function, contributing to the distinct Elizabeth line identity as well as tempering the space acoustically. 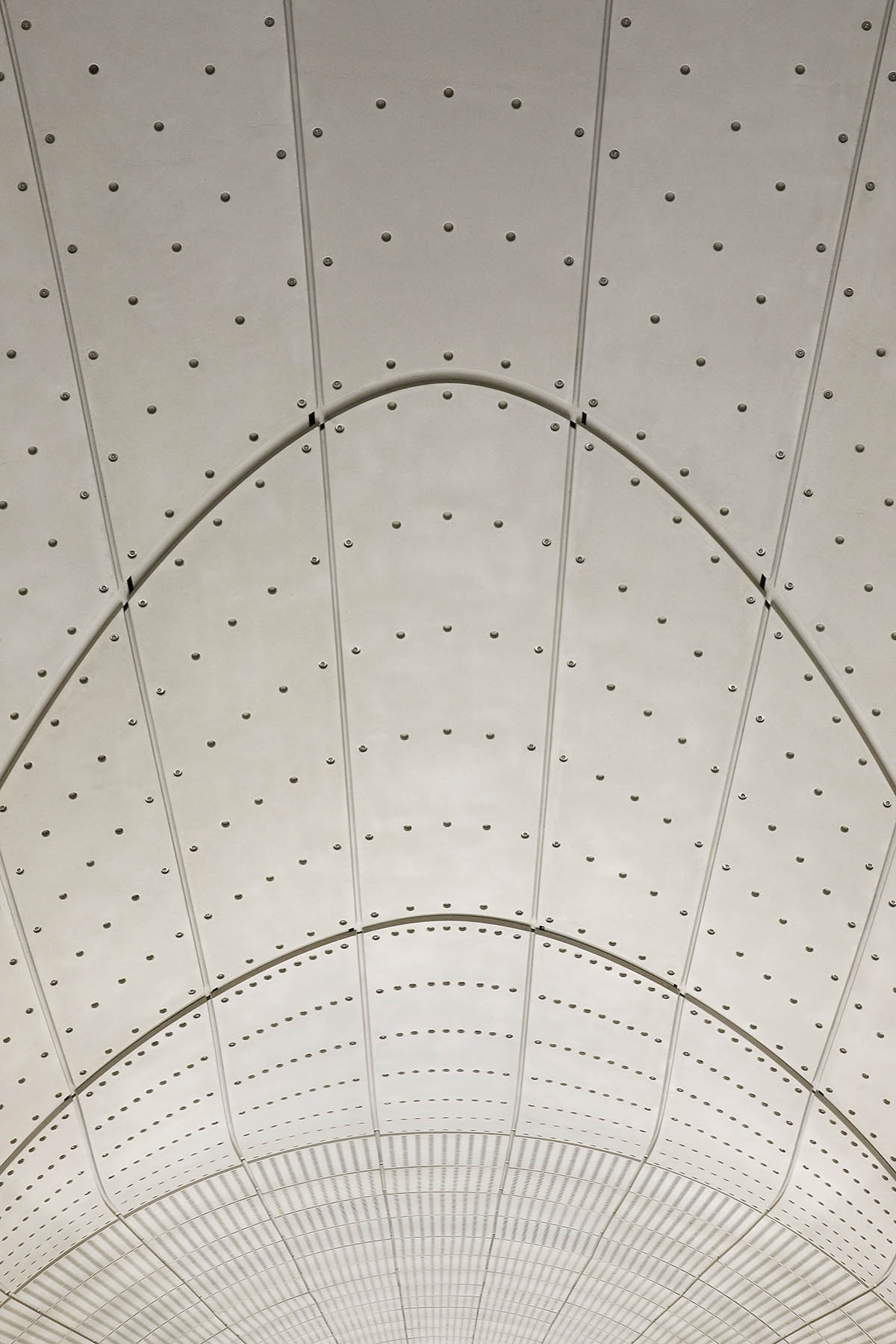 Grimshaw added that "A design led by the engineering – expressing and exemplifying the magnitude of London's largest infrastructure project in 20 years – also gave way to the opportunity of scale."

"Vast tunnels and platforms meant that elements throughout the line-wide design could be standardised, replicated and applied at an economy of scale." 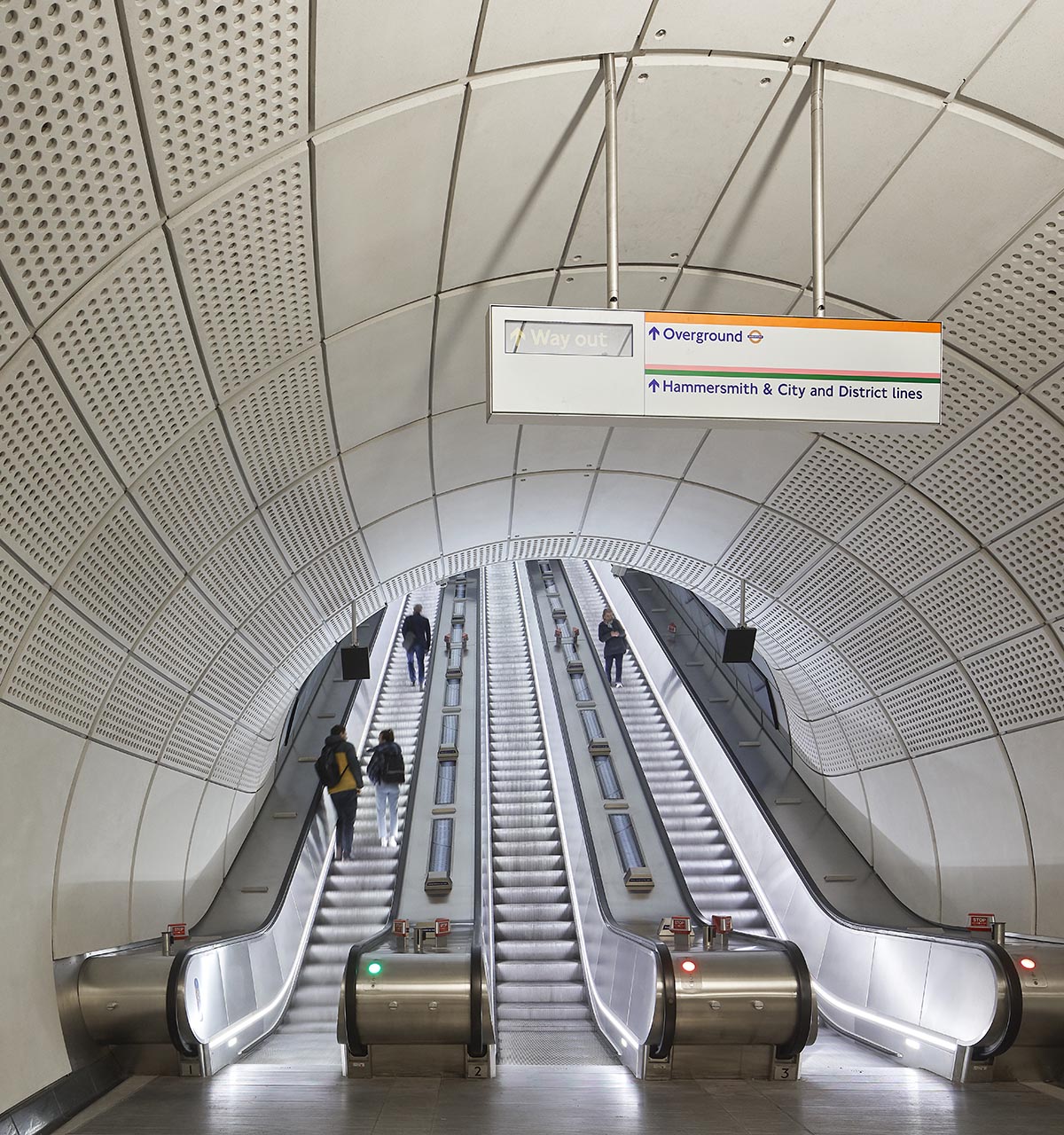 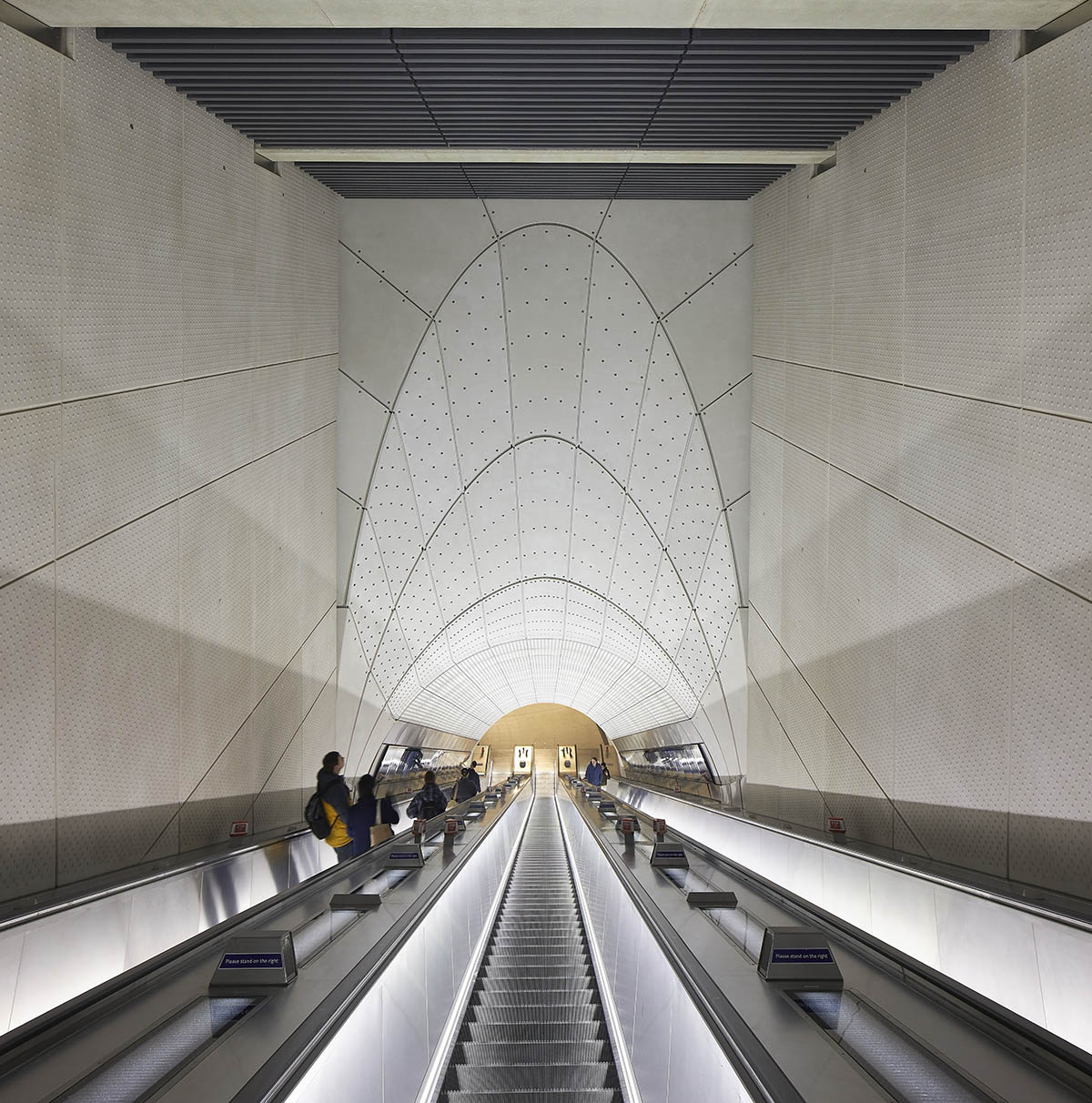 Grimshaw was founded by Sir Nicholas Grimshaw in 1980. The practice, one of the high-profiled architecture studios in the world, became a Partnership in 2007.

Grimshaw together with Mott MacDonald are working on the new Shenzhen Airport East Integrated Transport Hub. The firm designed the Sustainability Pavilion at the 2020 Expo Dubai.