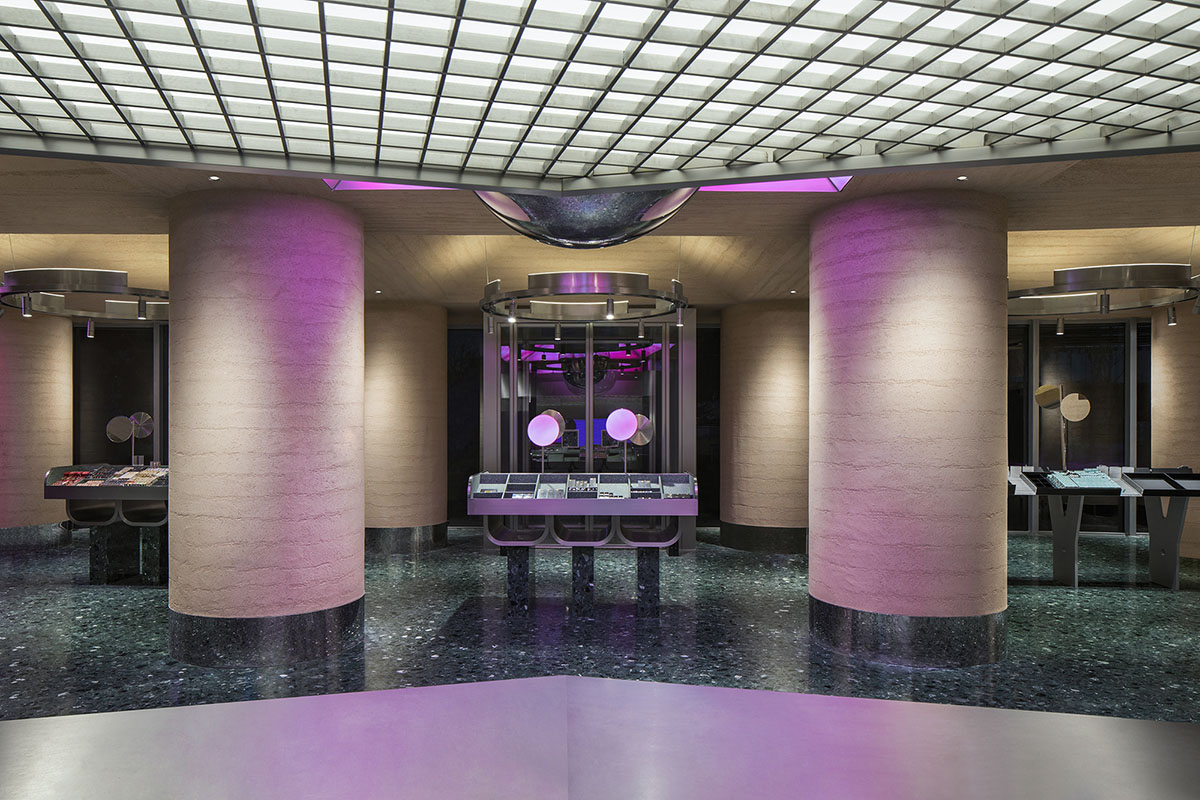 Called Haydon Zhengzhou, the space is located on the first floor of CITY · IMIX PARK, No.72 Taikang Road, Guancheng Hui District in Zhengzhou.

The design of Haydon Zhengzhou is inspired by Gaocheng Observatory in Zhengzhou, which is the oldest preserved astronomical platform in China that carries strong historical value. As a listed UNESCO World Heritage Site and one of the most well-known astronomical structures in the world, Gaocheng Observatory represents the exceptional achievements of ancient Chinese Astronomy. 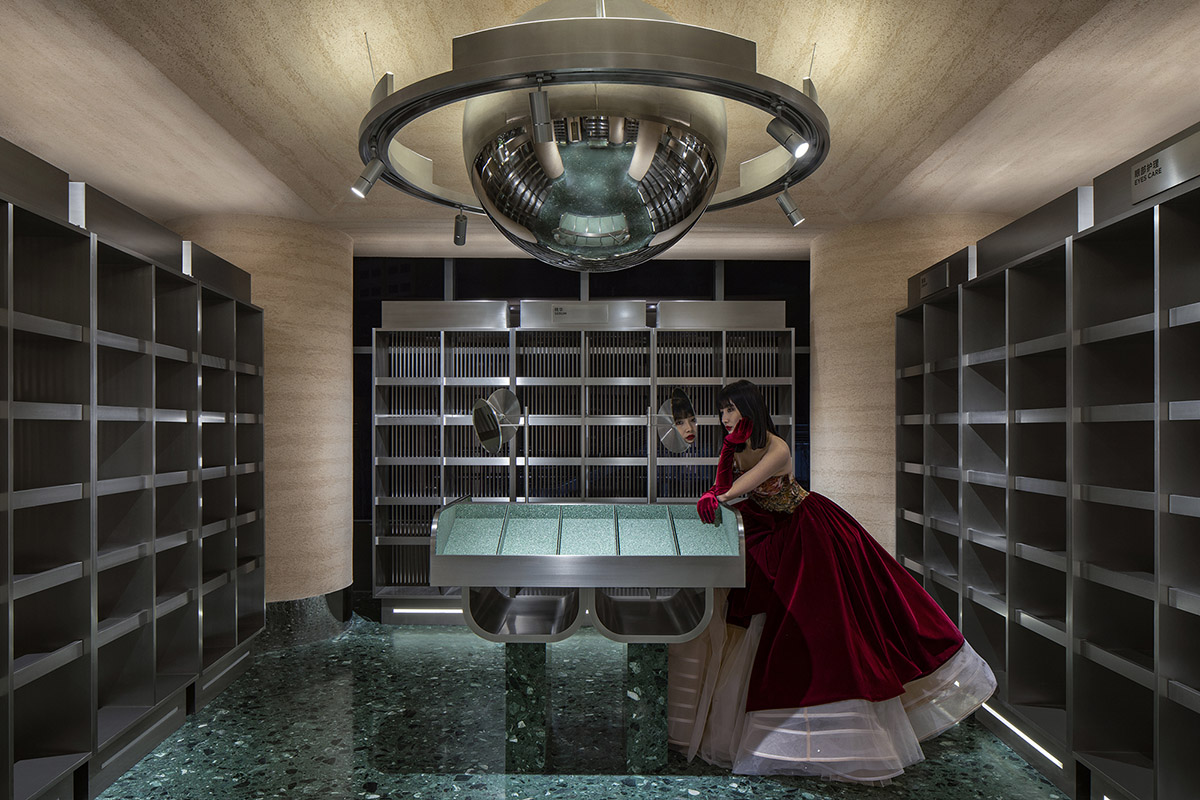 Taking design cues from the structures of Gaocheng Observatory and taking consideration into the local cultural context of Zhengzhou and the brand character of Haydon, SALONE DEL SALON took "Star Observing" as the design thread, to express the exploration of the universe and the unknown and the undefined brand core of Haydon. 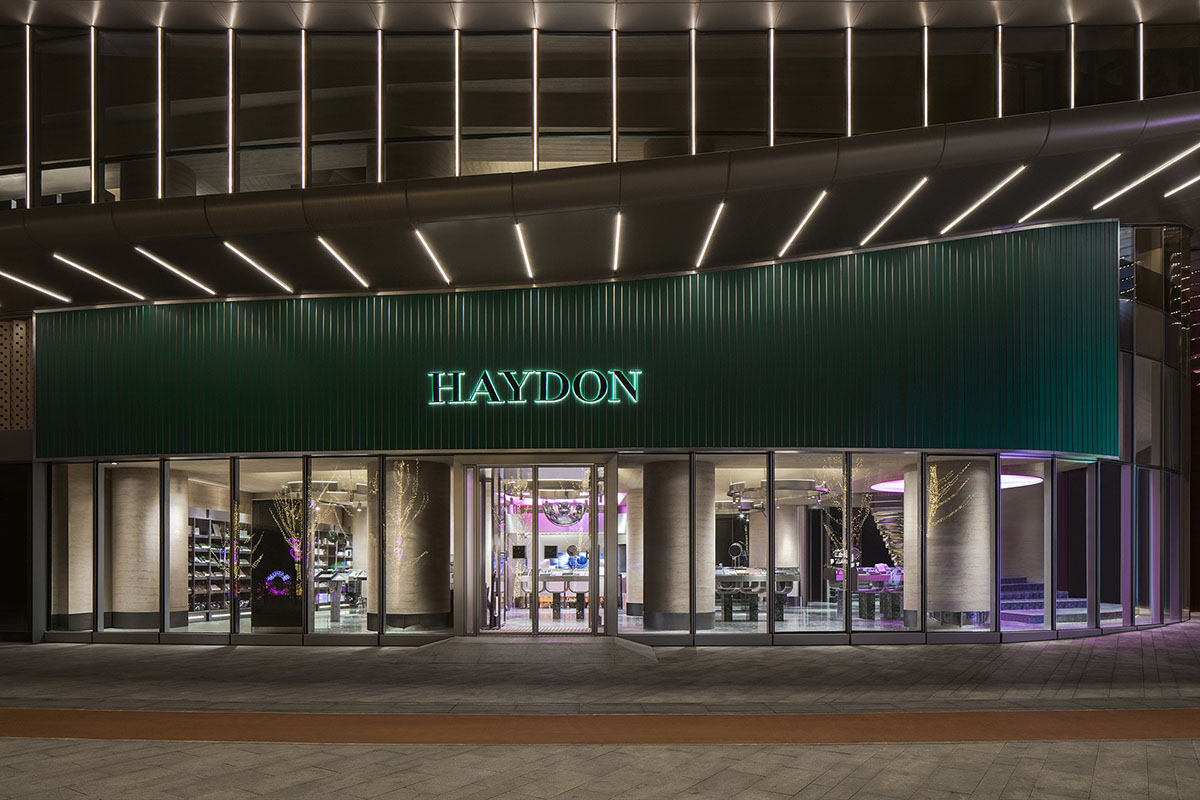 The structural form of Gaocheng Observatory is incorporated into this retail space, by extracting the spiral form of its steps and reinterpreting its other parts such as Shibiao and Shigui through new structures and materials. In this way, the space presents a dreamy, mysterious retro modern show. 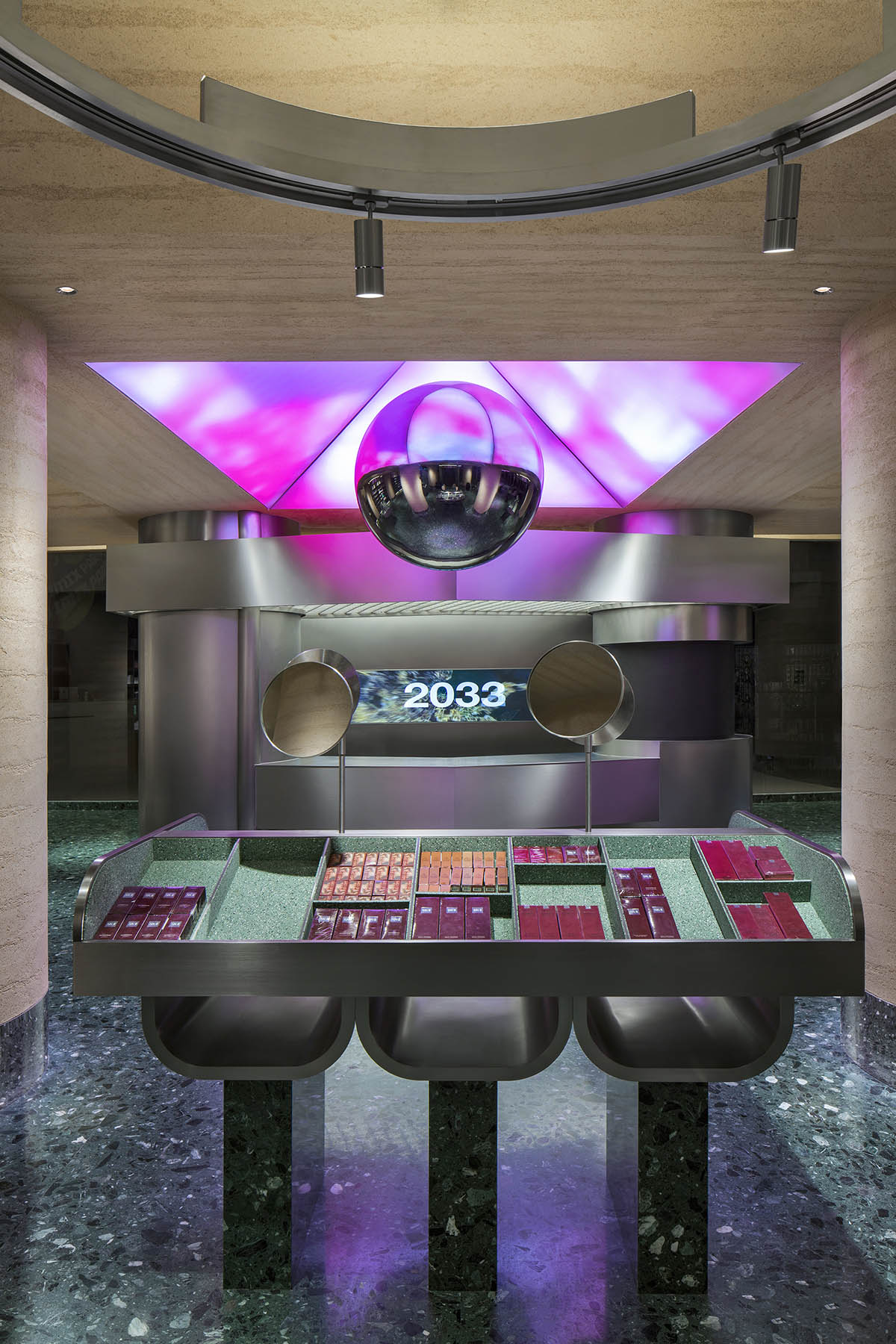 The facade of the store features linear lighting that creates a striking sense of order, and dark green hue that highlights an upscale retro texture. Clay-like finishes are extended throughout the interior space.

Both the exterior and the interior show strong features and cultural symbols. Like ancient astronomic instruments, circular lighting fixtures hanging throughout the space dialogue with the local cultural context. 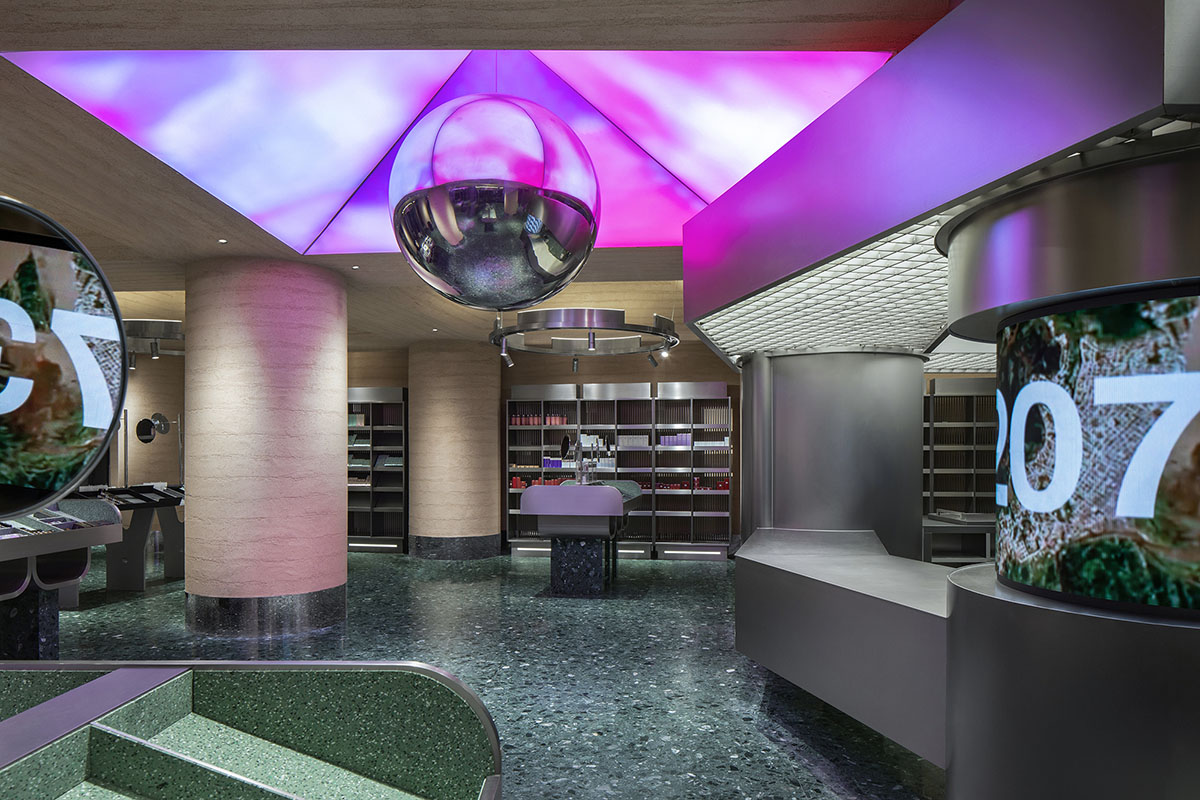 Silver gray tone and dark green retro elements contrast yet complement with each other. The dreamy purple lighting "dyes" the surrounding unique structures with varied shades, creating a visual focus of the "show".

Greenery is brought in to form a path, which adds vitality to the space. The path is like a catwalk, which extends the overall space's design while creating a refreshing experience. The staircase features a unique form, which takes design cues from the steps of Gaocheng Observatory. Its retro spiral form and the modern mirrored surfaces seem to be contradictory but in fact harmonize with each other. The design conveys the brand's attitude and strengthens its identity, and also portrays the concept of "city" through ritualistic, modern expressions. 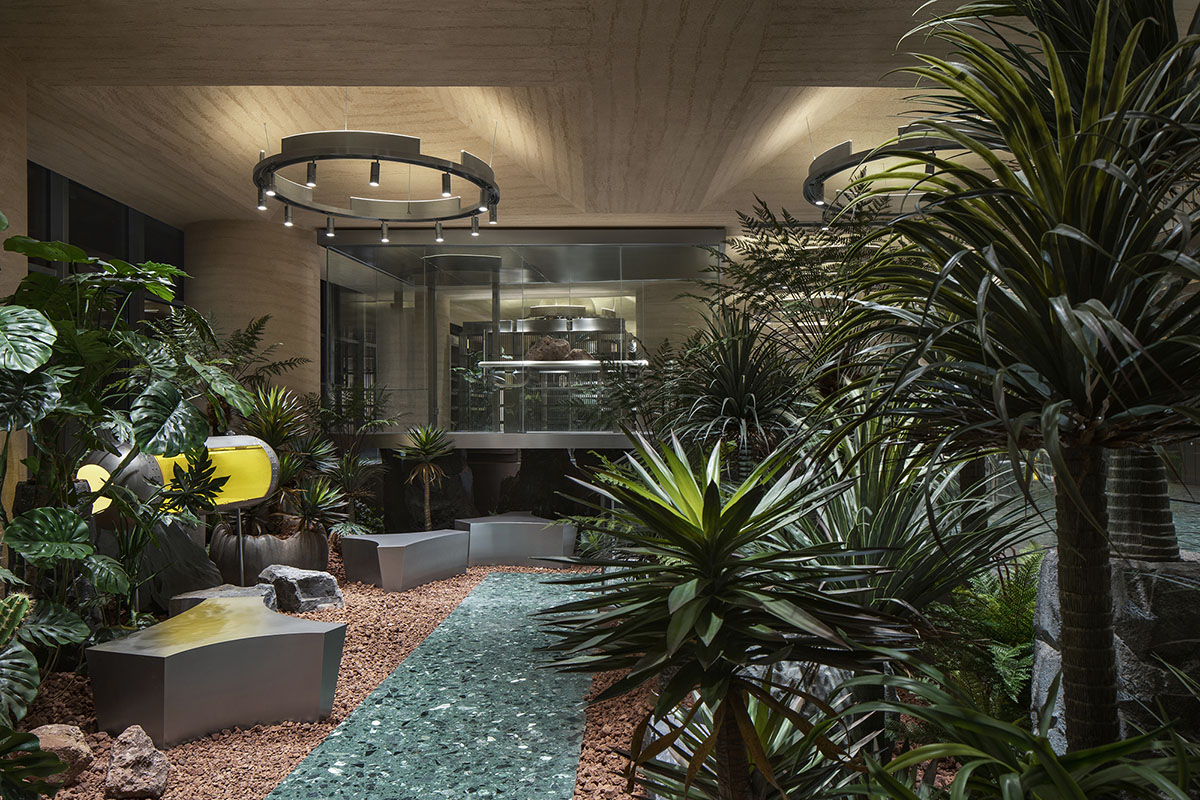 "For this project, I intended to express the concept of 'city', as well as my personal emotions. The space is presented and photographed based on the theme of 'show', in a way to pay attribute to those who have influenced my design career, including Alexander McQueen, Andy Warhol and my father. When the idea popped into my head, my primary intention was to construct a captivating spatial realm," the chief designer Salone explained. Observatory elements and the commercial space coordinate with each other, fusing both cultural features and practicality. On the second floor, product shelves that feature a sense of order are combined with textured coatings, creating a connection between the past and the present.

This area continues the color palette and material scheme of 1F, to ensure a unified tone of the overall space and convey brand and cultural narratives. 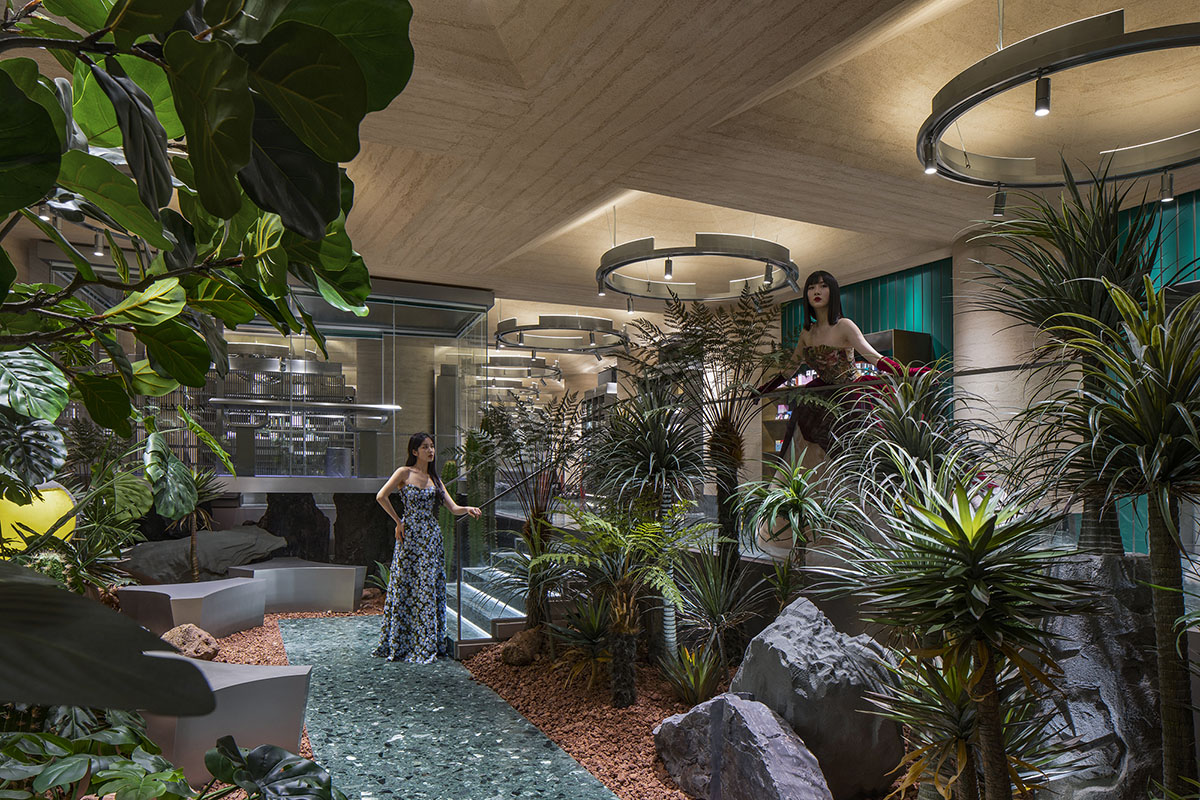 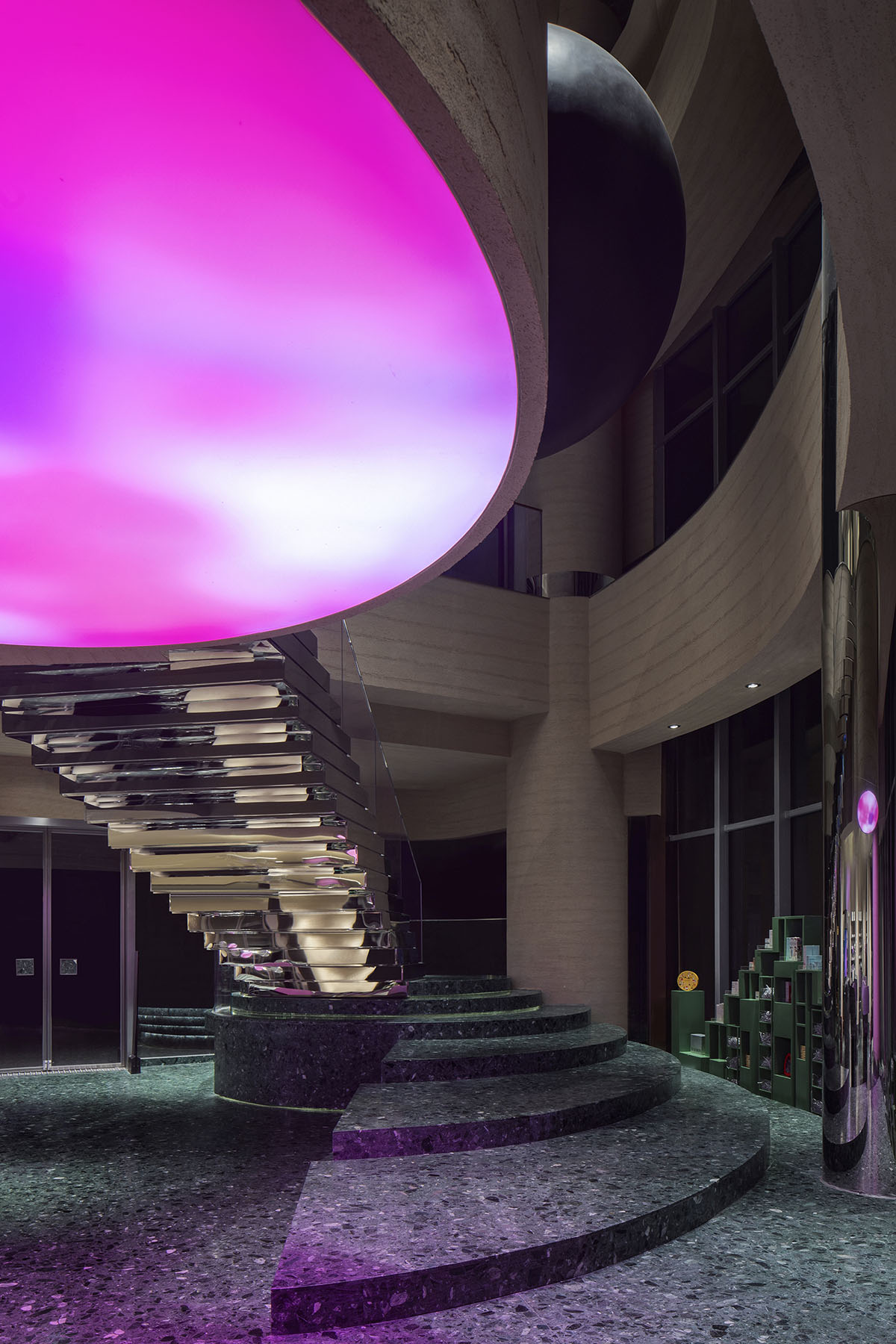 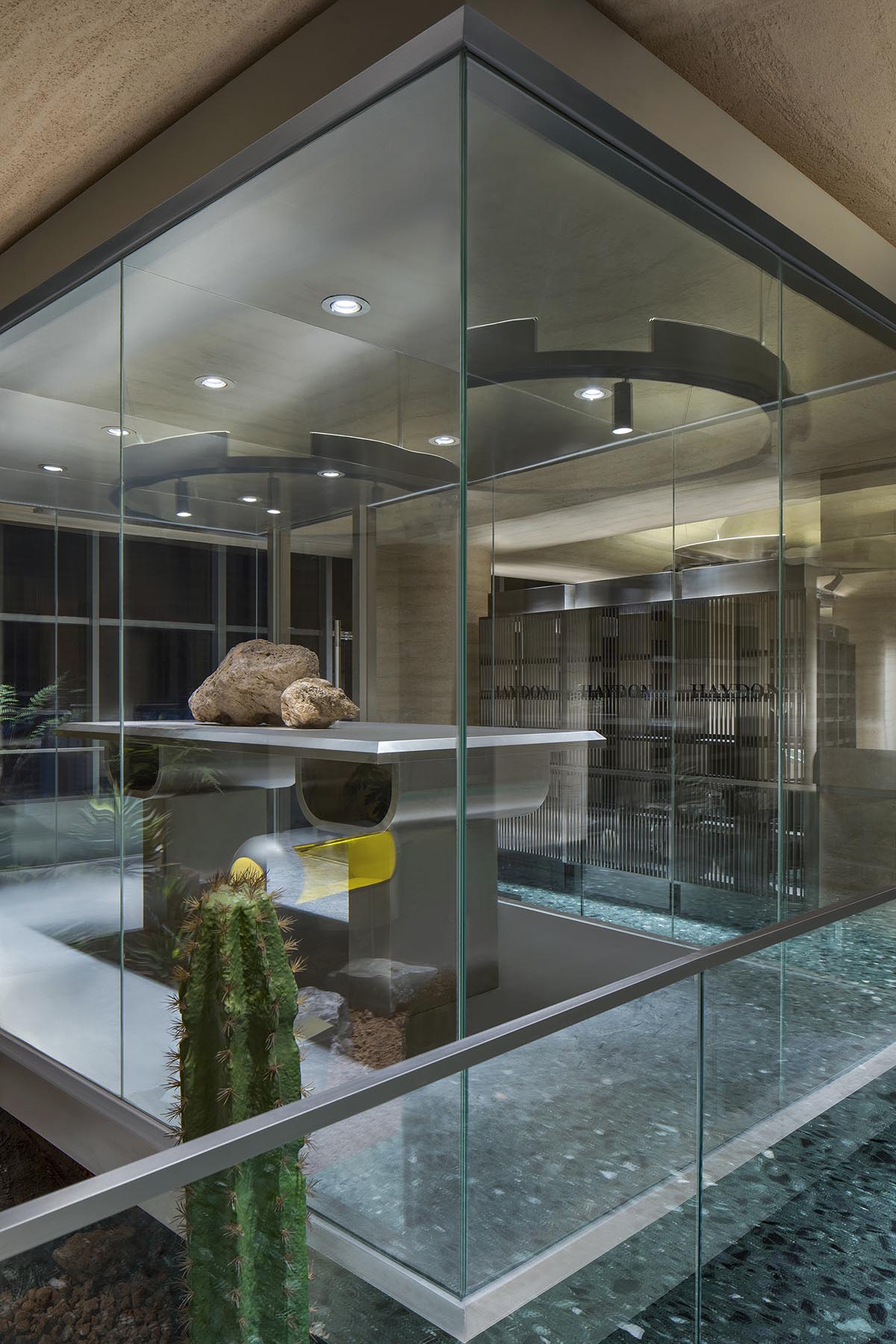 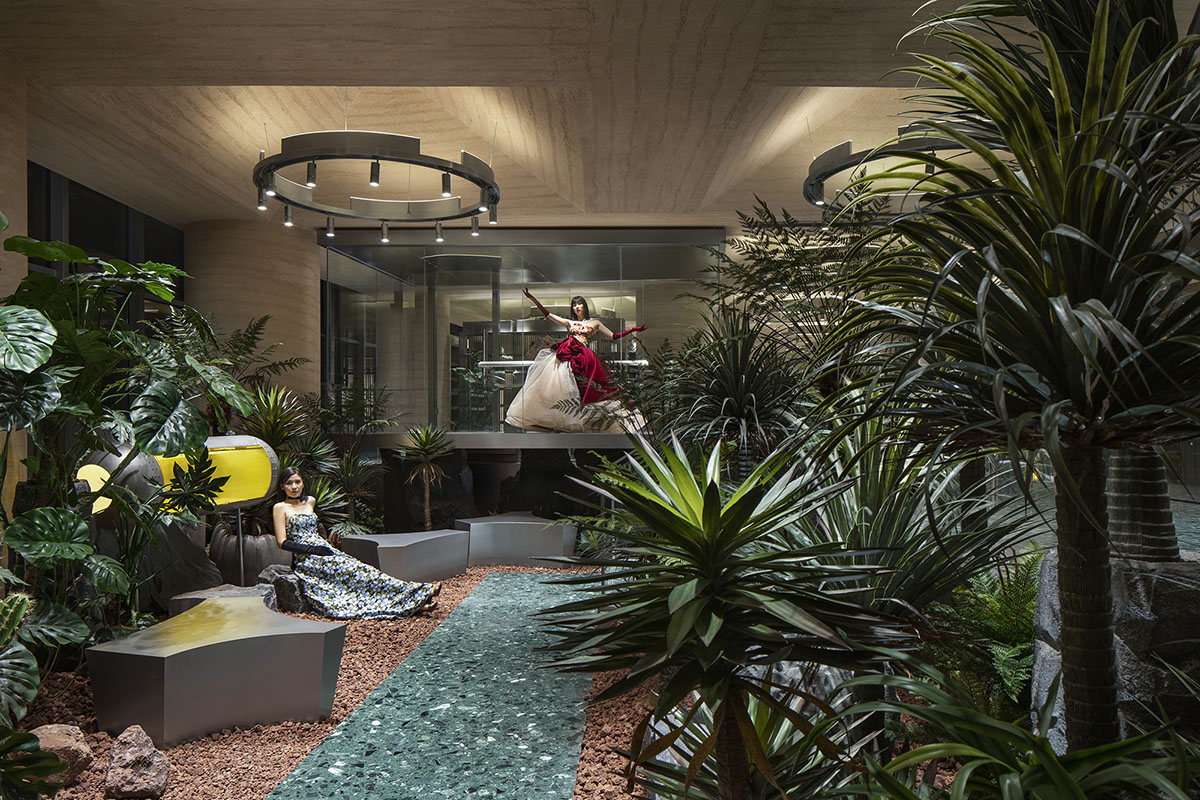 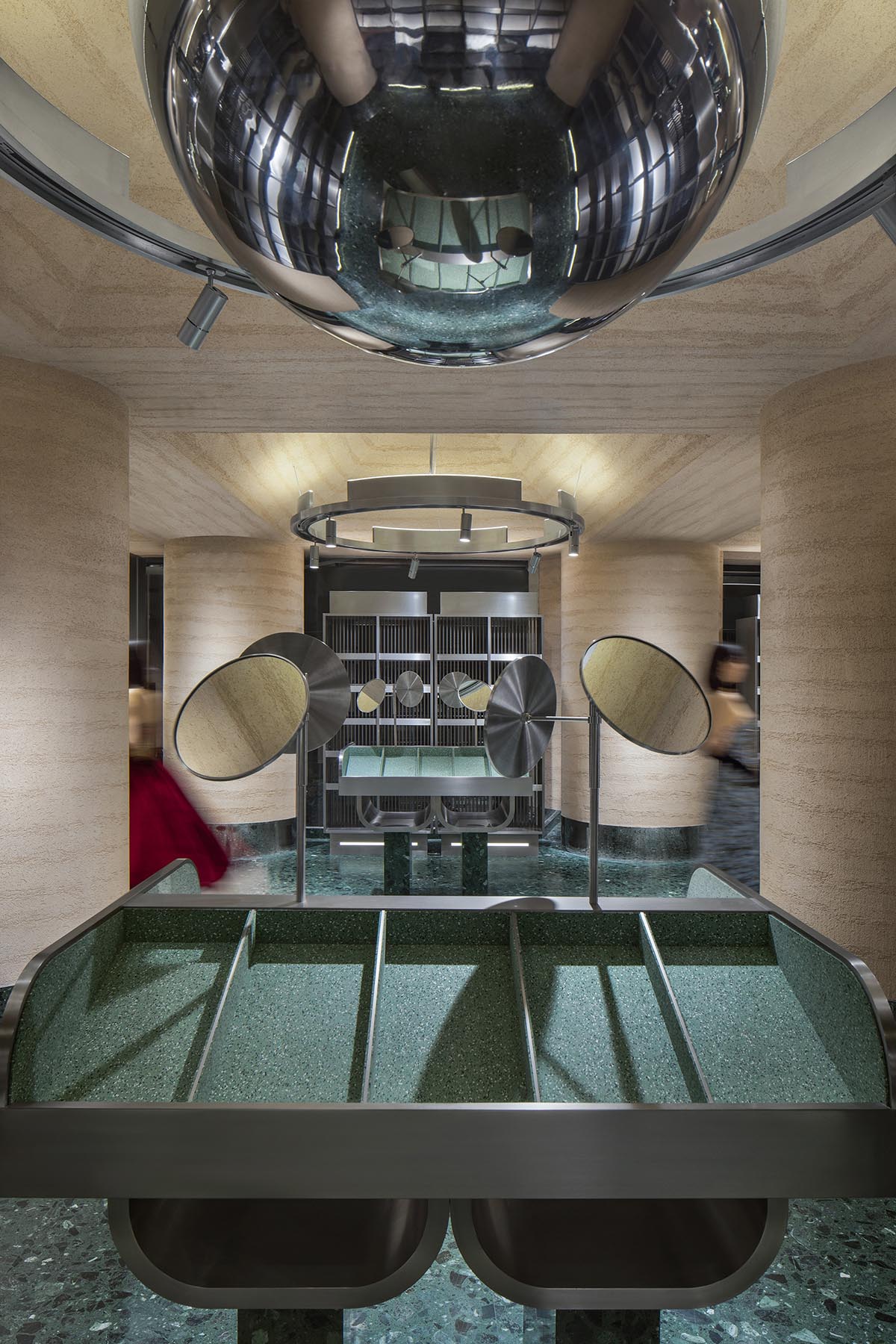 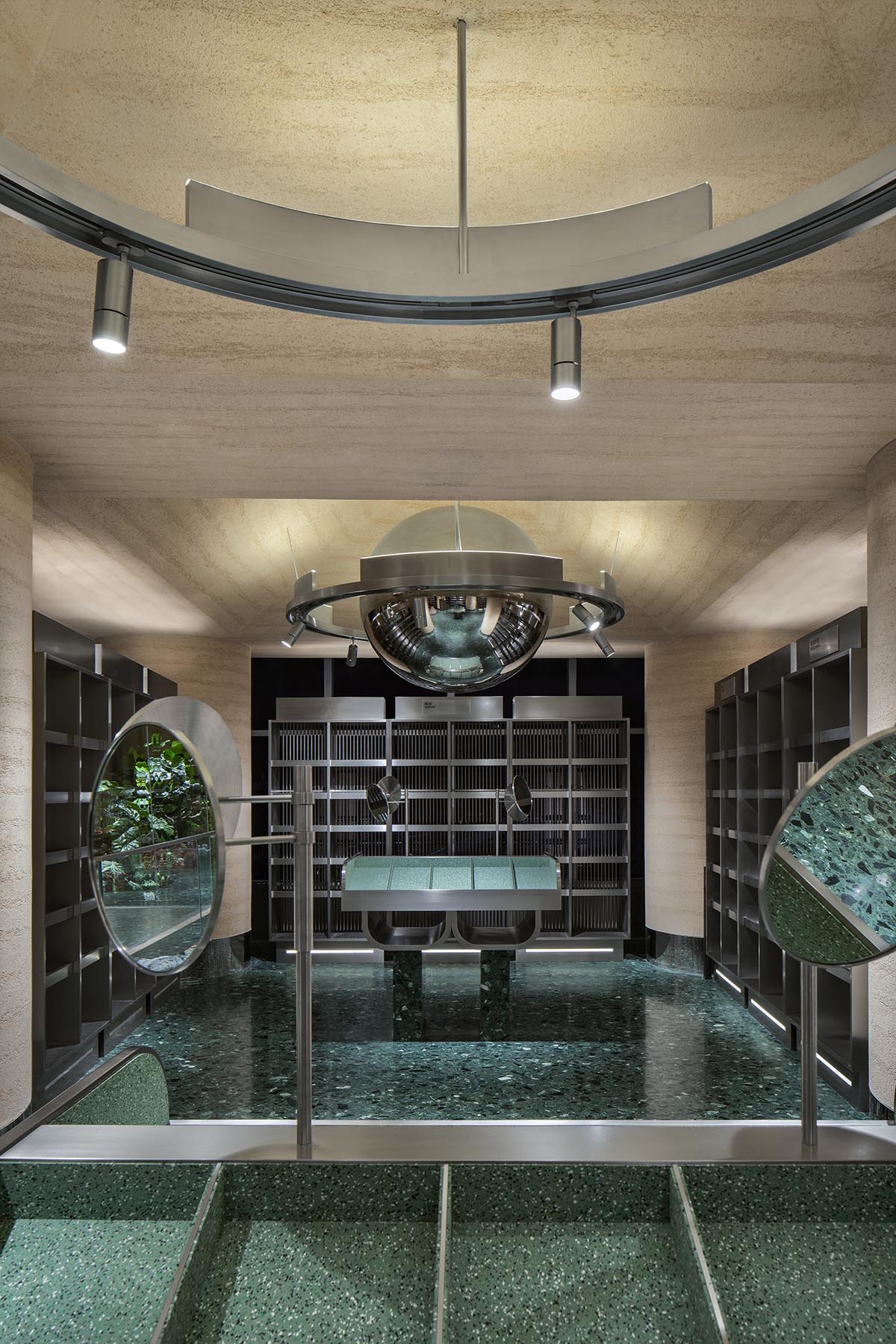 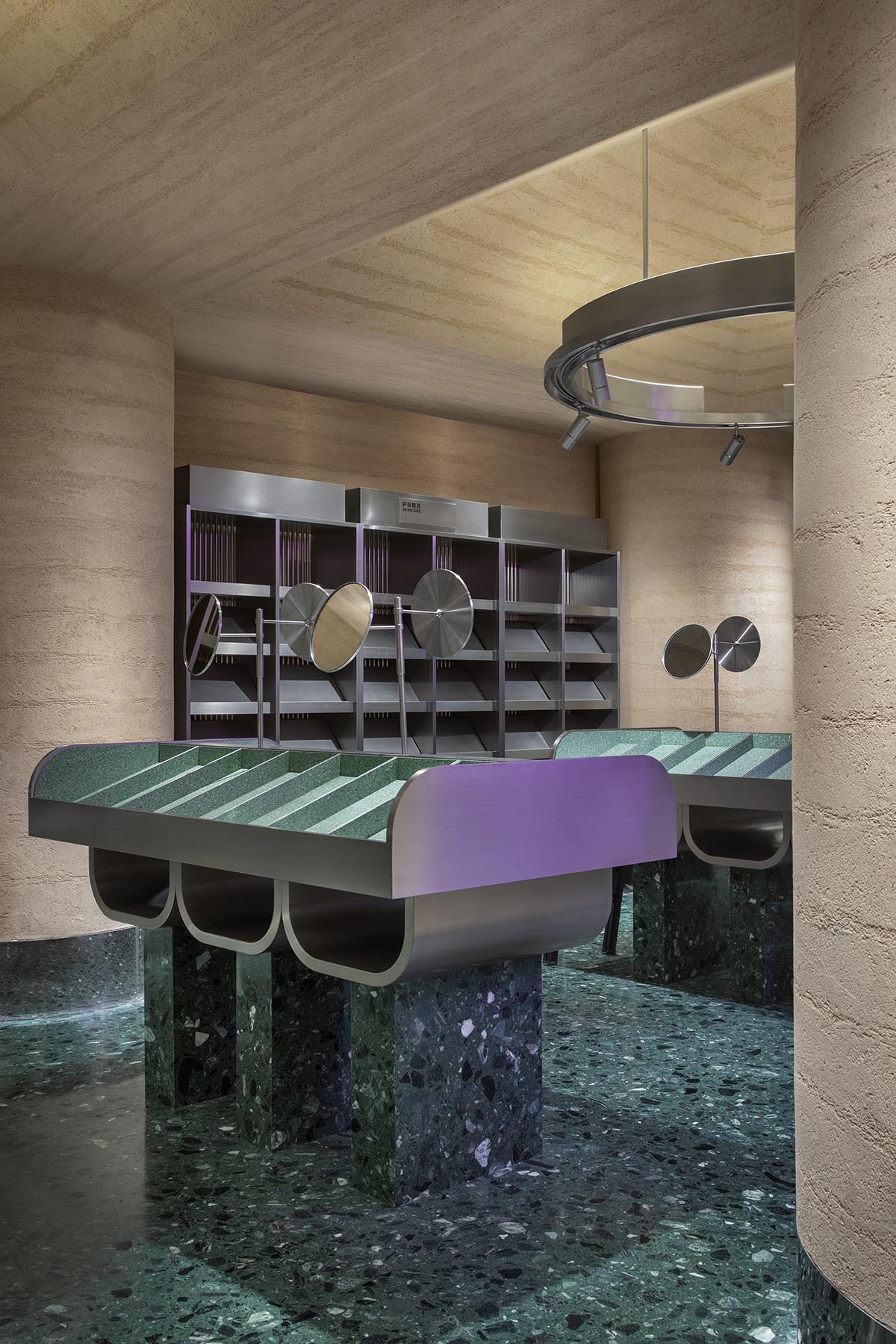