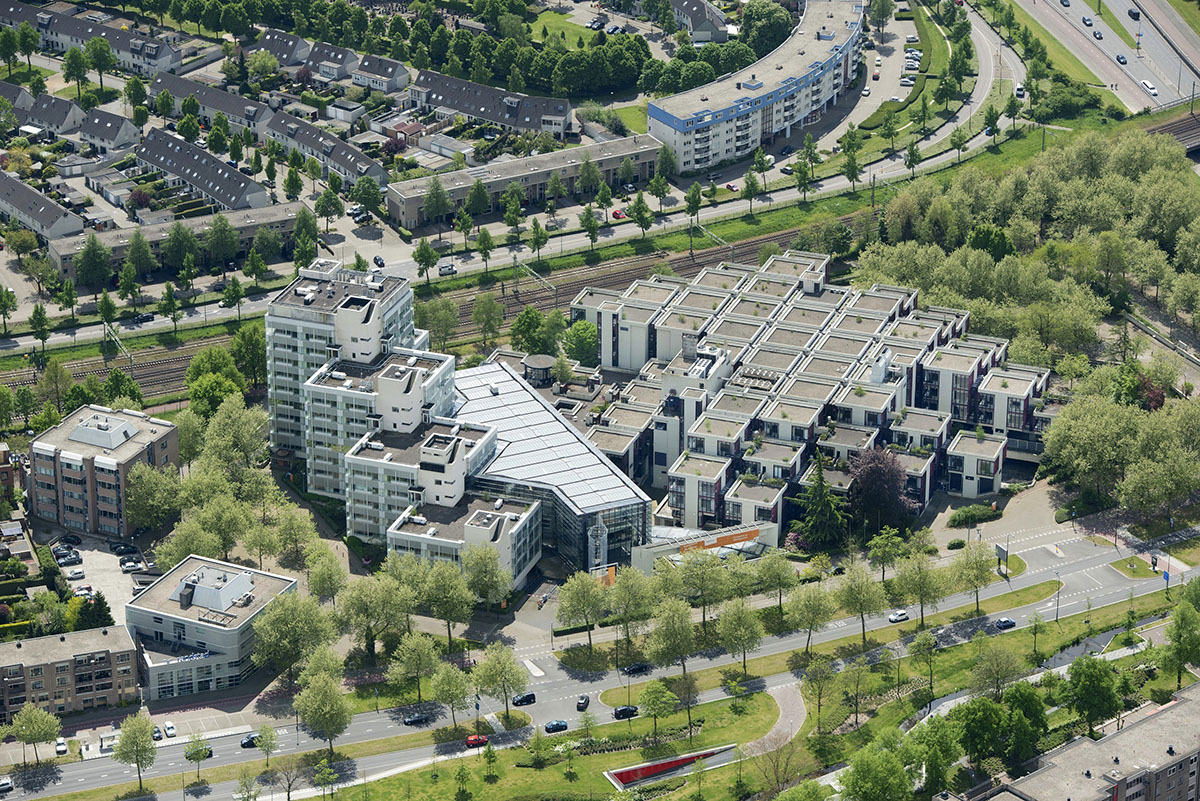 Herman Hertzberger, a Dutch architect, and a professor emeritus of the Delft University of Technology, built the Centraal Beheer building and opened in 1972.

Hertzberger’s design, featuring four quadrants and divided by two central “streets” that form the social heart of the building, was a modern piece and revolutionary design in the redefinition of "workspace".

Designed for an insurance company, the office is widely seen as one of the high points of the structuralism. MVRDV was commissioned to convert the celebrated building into "a sustainable, green residential neighbourhood that echoes the design principles of the existing building."

The new design is developed in consultation with Herman Hertzberger’s office AHH, while it will preserve the main structure and transform it into a new modern and sustainable residential complex.

"The design will prioritise heritage preservation, greening, and innovation"

Commissioned by Certitudo Capital, the transformation will be designed as part of a larger area masterplan for the three-hectare site near the city’s train station. MVRDV’s design will prioritise heritage preservation, greening, and innovation and incorporate approximately 650-800 homes.

Hertzberger's design is made up of consistently repeating and adjusting a 9-metre cube basic element. The has a distinctive form and remarkable interior. Half a century later, the building enjoys worldwide fame among architects and architecture historians.

In 2015, Certitudo Capital purchased the disused building and its surrounding grounds with the aim of converting it into a multifunctional residential area.

MVRDV developed a comprehensive vision which follows the structuralist principles of the building throughout the residential area. 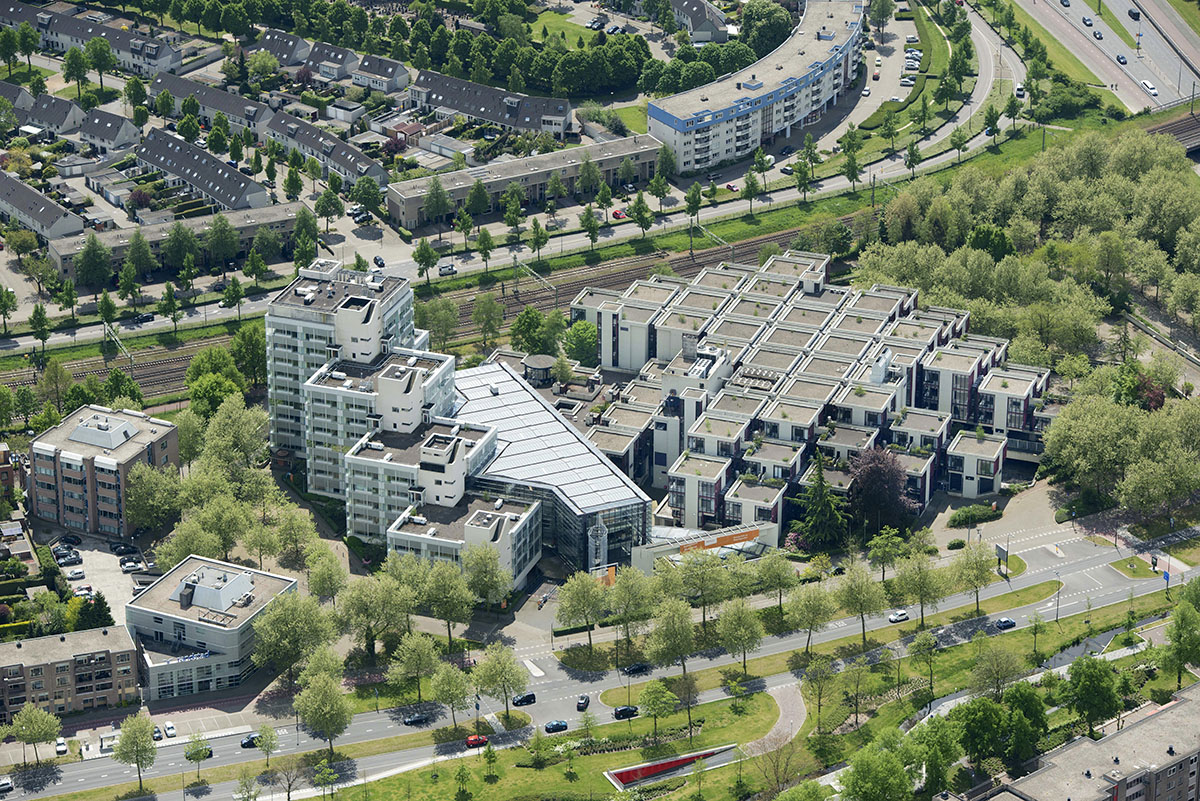 "The axes of the central streets within the building will not only be a place for Apeldoorners to meet, they will also become a part of the most important routes through the area, better connecting the building with the city and the station and reinforcing Hertzberger’s original design vision," said MVRDV.

The Centraal Beheer building and the Pakhoedtorens, which are also part of the site, will contain a variety of housing. According to MVRDV, the team will reuse the original structure as much as possible and use sustainable materials.

"The project’s goal is not only to create as diverse a housing supply as possible, but also to turn the building into a destination complete with public programming, making the park an attractive place to visit," MVRDV added.

"Transforming the existing building is not only important for preserving Dutch architectural heritage, but also for the environment: the CO2 emissions of the construction of this residential area are significantly lower than for regular housing," the studio continued.

"Herman Hertzberger is an important role model for me. When I was studying at the Delft University of Technology, he was one of my professors, along with Aldo van Eyck and Rem Koolhaas – a fine trio. I worked with him twice on InDeSem, the International Design Seminar he organised."

"His social agenda makes him an inspiring architect to me, and I feel a kinship with him; just as Herman launched a totally new office landscape in the early seventies, MVRDV did the same in the early nineties with the Villa VPRO. We toured the client through the Central Beheer building and it opened their minds; it became an inspiration for our own work. We will certainly retain it as the basis for the transformation," Maas added.

"For us the focus is, on the one hand, on restoring a landmark, and on the other hand on making an improvement to the spatial quality”, said Arno van den Thillart, director of project development at Certitudo Capital.

"The parties involved are united in this respect, which has accelerated the planning process. Now it’s time to get to work," added Arno van den Thillart.

MVRDV added that the original structure of Centraal Beheer will be continued in the new neighbourhood and the new landscape.

Based on the same principle, the design of the new buildings will be designed on the 9-metre grid of the existing building, but the modules will be built in wood to distinguish them from the original parts of the design.

The team will integrate new program elements and functions into the old building, fulfilling the structuralist principles that it was originally built upon.

The landscape design will also have a clear pattern based on the grid, within which a “wilder” infill with trees, grasses, water, and play and sports facilities can be incorporated. "In the following phases, a study will be conducted into which tree species can best be added to the park in order to stimulate biodiversity," MVRDV explained.

MVRDV has much experience in revitalising disused public spaces and buildings. In Amsterdam, Tripolis Park is currently under construction, which renovates Aldo van Eyck's Tripolis office complex and adds a glass extension, which serves as a “soundscreen” to protect it from the dust and noise of the neighbouring motorway.

In Utrecht, the masterplan for the new Jaarbeurs was launched at the end of 2019, ensuring that one of the oldest trade fairs in the Netherlands will retain its place in the centre of Utrecht.

All images courtesy of Certitudo Capital.