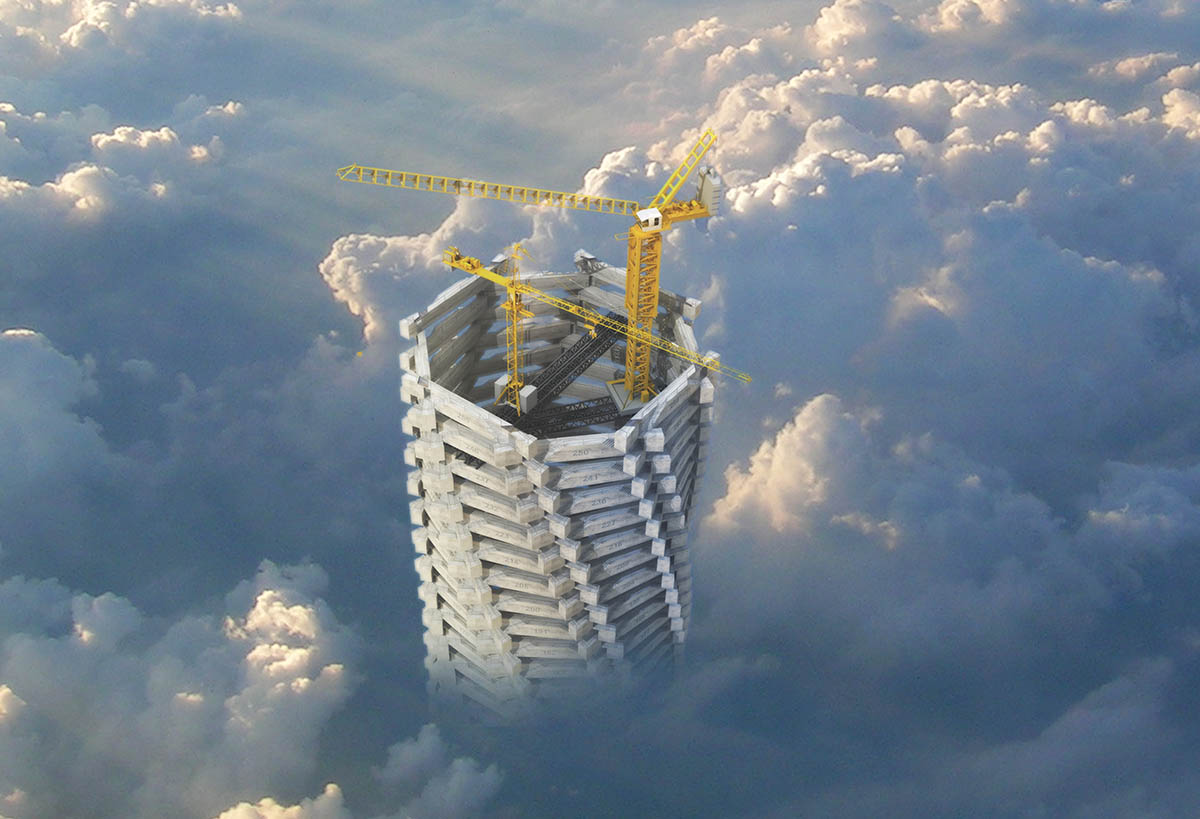 France- and Chile-based architecture studio WEEK Architecture has designed a memorial addressing to the number of reported deaths in the construction sites of the 2022 FIFA World Cup stadiums in Qatar which is being held from 20 November to 18 December 2022.

Called Qatar World Cup Memorial, the twisted orthogonal-shaped tower was first revealed in 2014 and now it becomes an evolving tower that is shaped according to the number of migrant workers who have lost their lives during the construction sites of the 2022 FIFA World Cup stadiums in Qatar.

Reaching at a 4.4-kilometre height, the tower is made up of twisted concrete modules, with each concrete block representing one of the migrant workers who have lost their lives during the construction of these stadiums.

The studio adds that as the number of workers who lost their lives increases, the tower also grows.

"We predicted a 1.5km high memorial if the frequency of the number of deaths did not slow down," said WEEK Architecture. 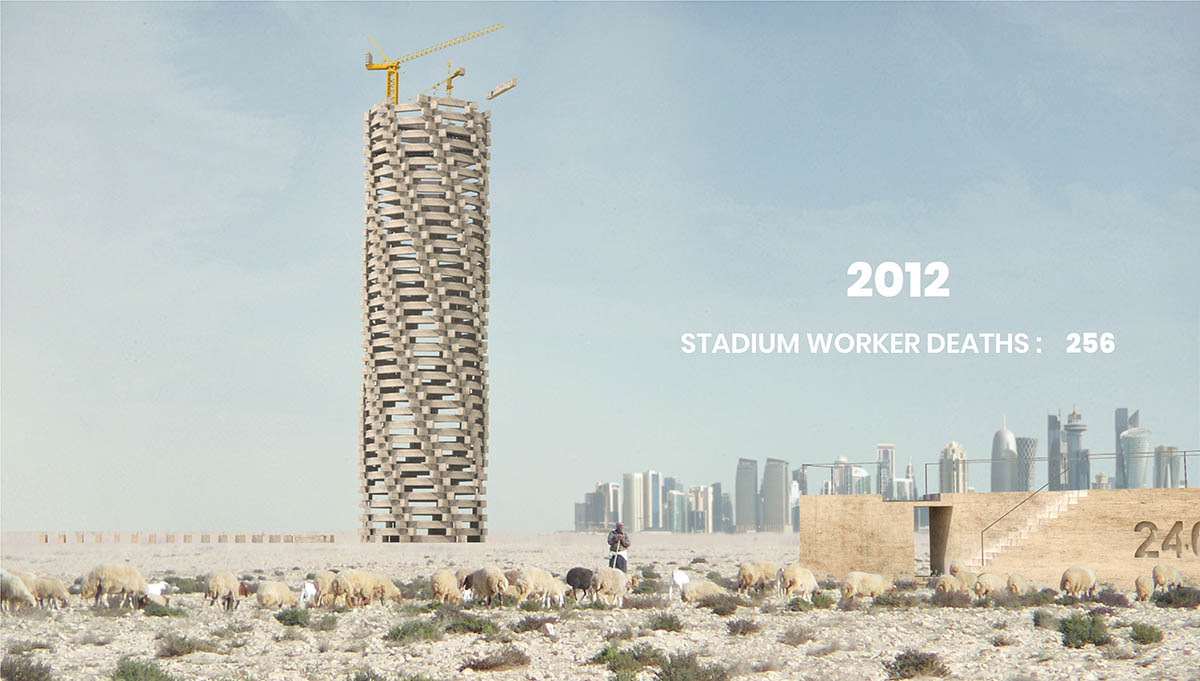 Originally developed as a shorter tower, the architects update the tower's height before the tournament opens, based on the last reported death toll.

According to The Guardian's article revealing statistics about the number of deaths of migrant workers in 2021, in the last decade, more than 6,500 migrant workers had lost their lives between 2010 and 2020 in Qatar.

The statistics showed that most of the deaths of migrant workers were revealed from different countries, such as India, Pakistan, Nepal, Bangladesh and Sri Lanka. 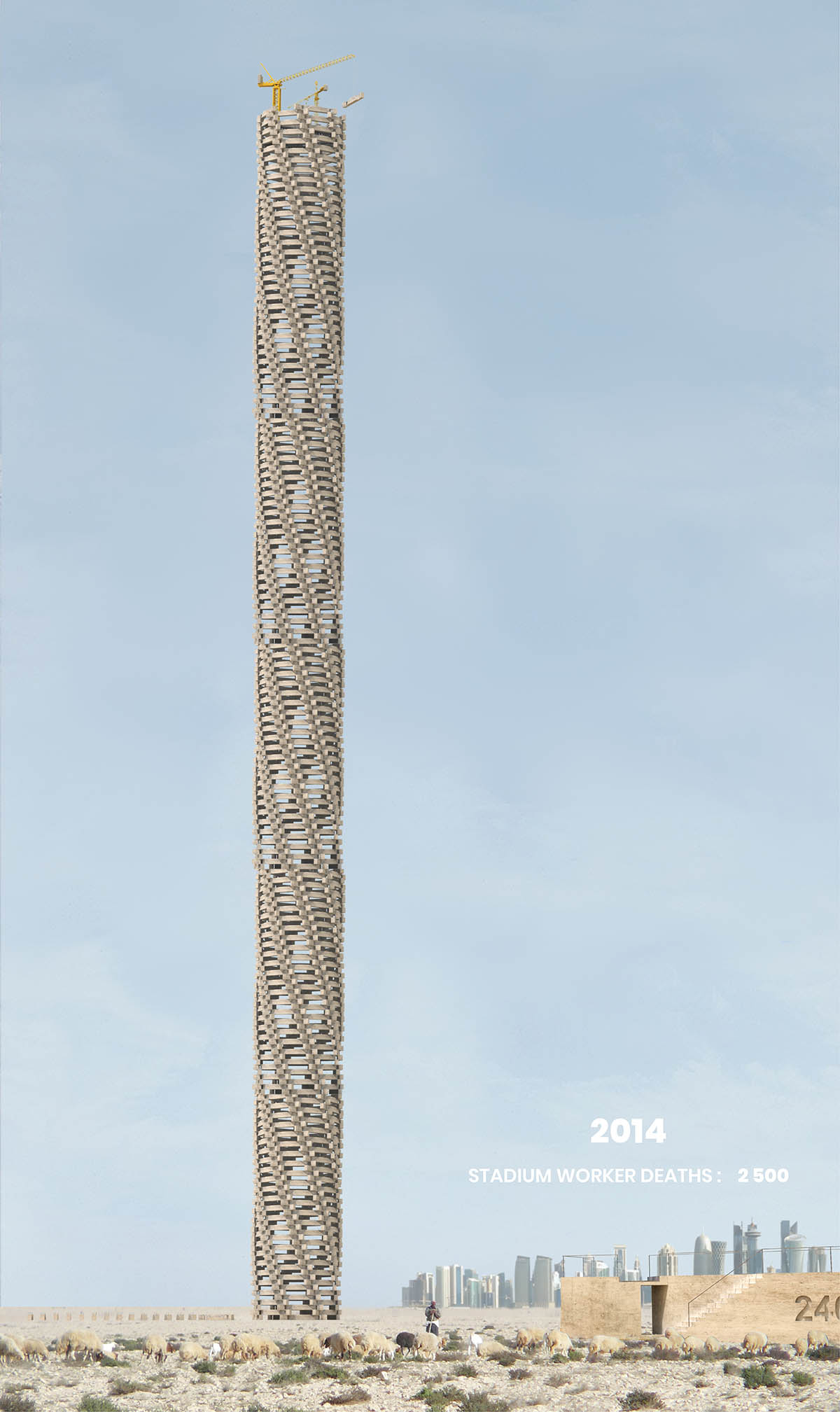 On the other hand, in a press statement published by Business & Human Rights on March 2021, FIFA claimed that 37 deaths have been recorded since construction began in 2014, three of them were work-related fatalities on FIFA World Cup sites and 34 non-work-related deaths among FIFA World Cup workers.

Based on the latest number of figures, the studio designed the height of the tower as 4.4 kilometers, representing the number of 6,751 deaths on the construction sites. 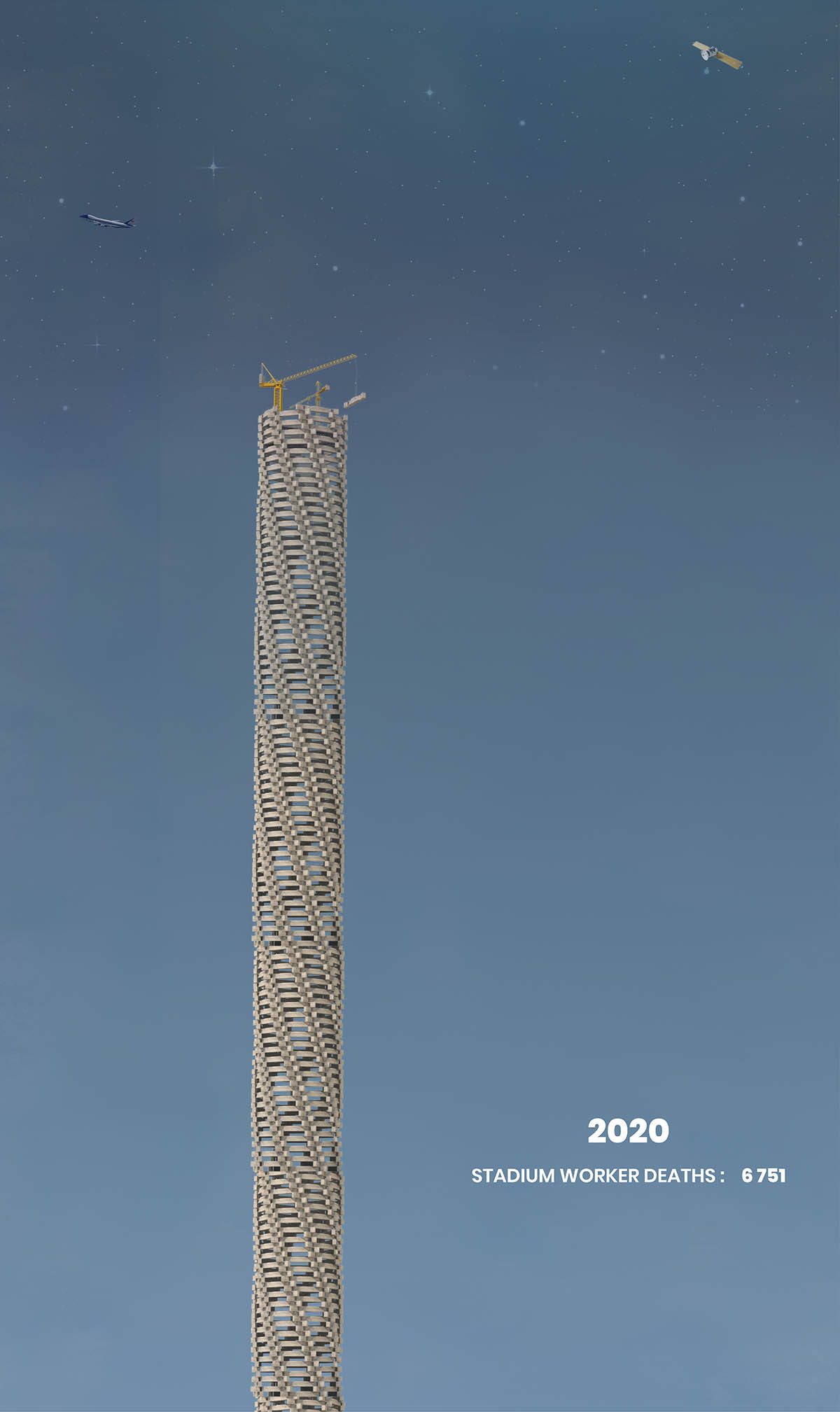 "Since the end of 2010 and the designation of Qatar as the host country for the organization of the 2022 World Cup, no independent body has been able to defend the rights of workers or count the deaths," said the studio.

"The right to strike and trade unions do not exist. The only figures available are those of the Qatari authorities."

"Between 2010 and 2019, 15,021 foreigners died in Qatar, of all ages and professions. But this figure is not officially linked to the construction of World Cup stadiums." 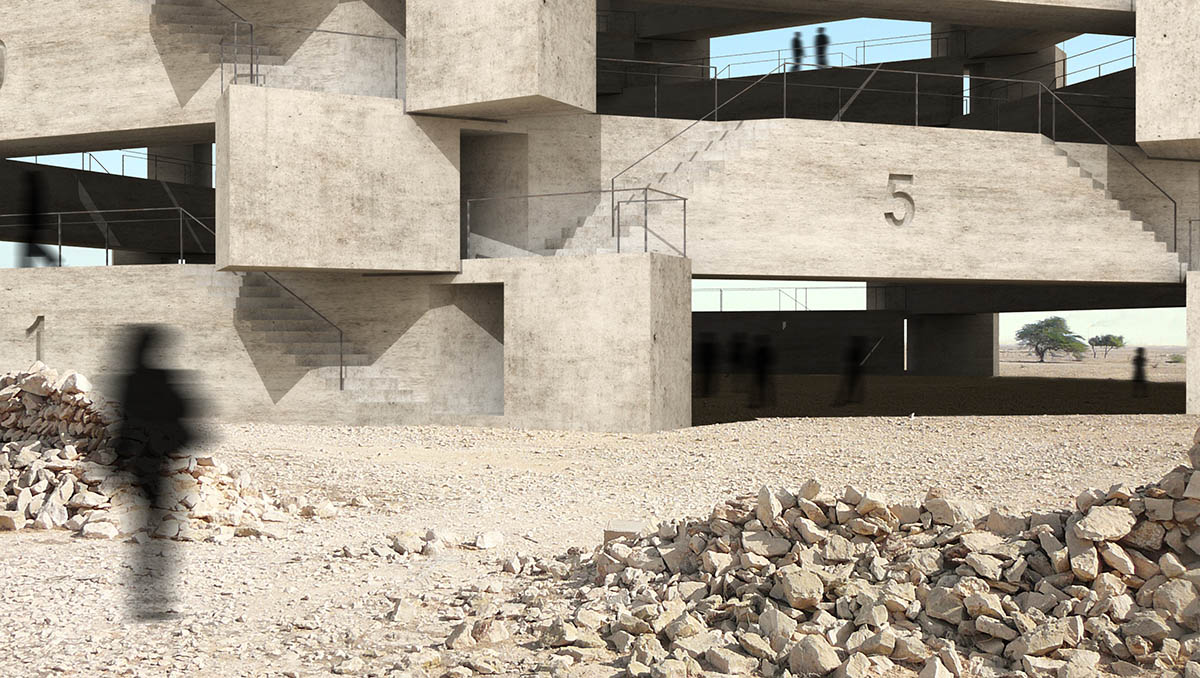 "Yet most of them are relatively young and healthy migrant workers who have passed their medical tests in their country of origin. When they arrive in Qatar, they suddenly die of "natural causes", cardiac arrest or respiratory arrest. Which is not a cause of death, for health experts who were consulted by Amnesty International."

"Sunstroke, dehydration or exhaustion, many middle-aged men die suddenly after long hours of work in extreme heat," added the studio.

The studio believes that "this scandal also questions the responsibility of FIFA."

"It was not until 2017 that it published an important human rights policy. But FIFA must find the legal means to impose respect for human rights in the host country. Football is the most popular sport in the world and the World Cup is the most unifying event," the studio continued. 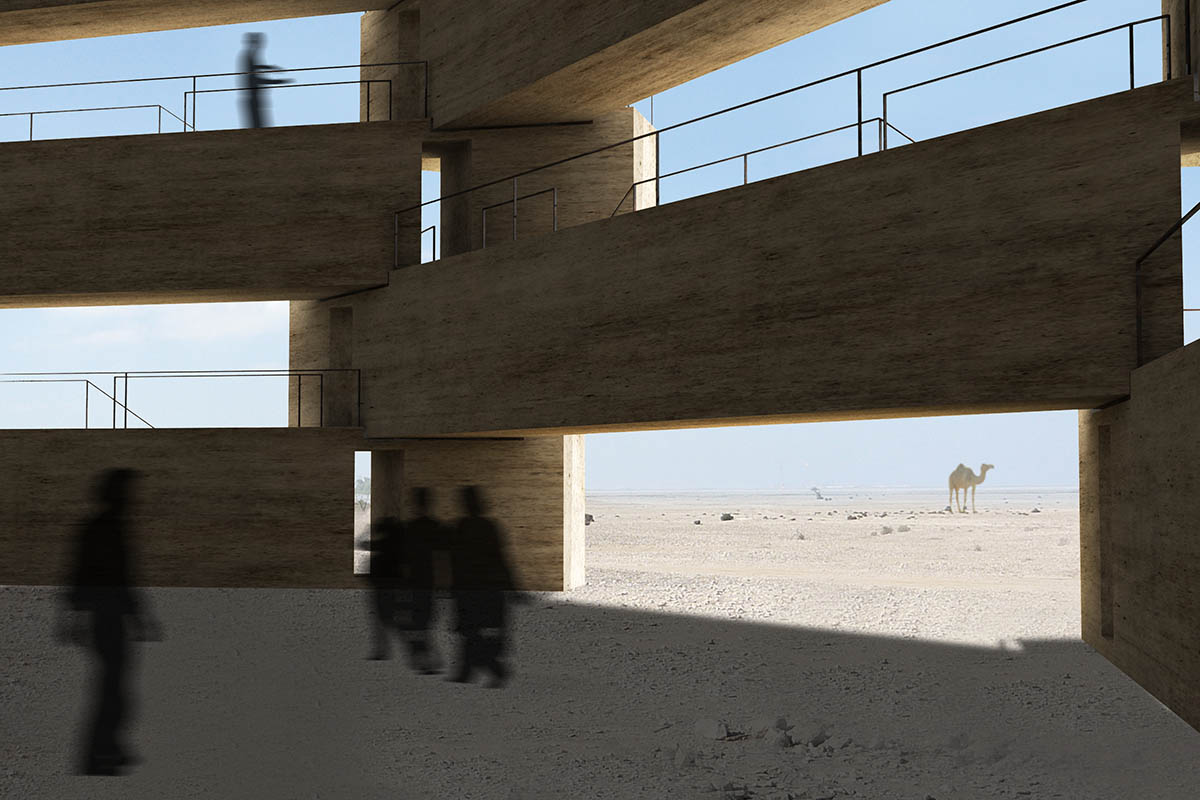 The architects explained that Qatar World Cup Memorial offers families from Nepal, India and other nationalities "a place of remembrance" away from the cities and skyscrapers of Qatar.

The design of the tower is based on four modules per floor and two staircases per module, the project has a multitude of possible routes. 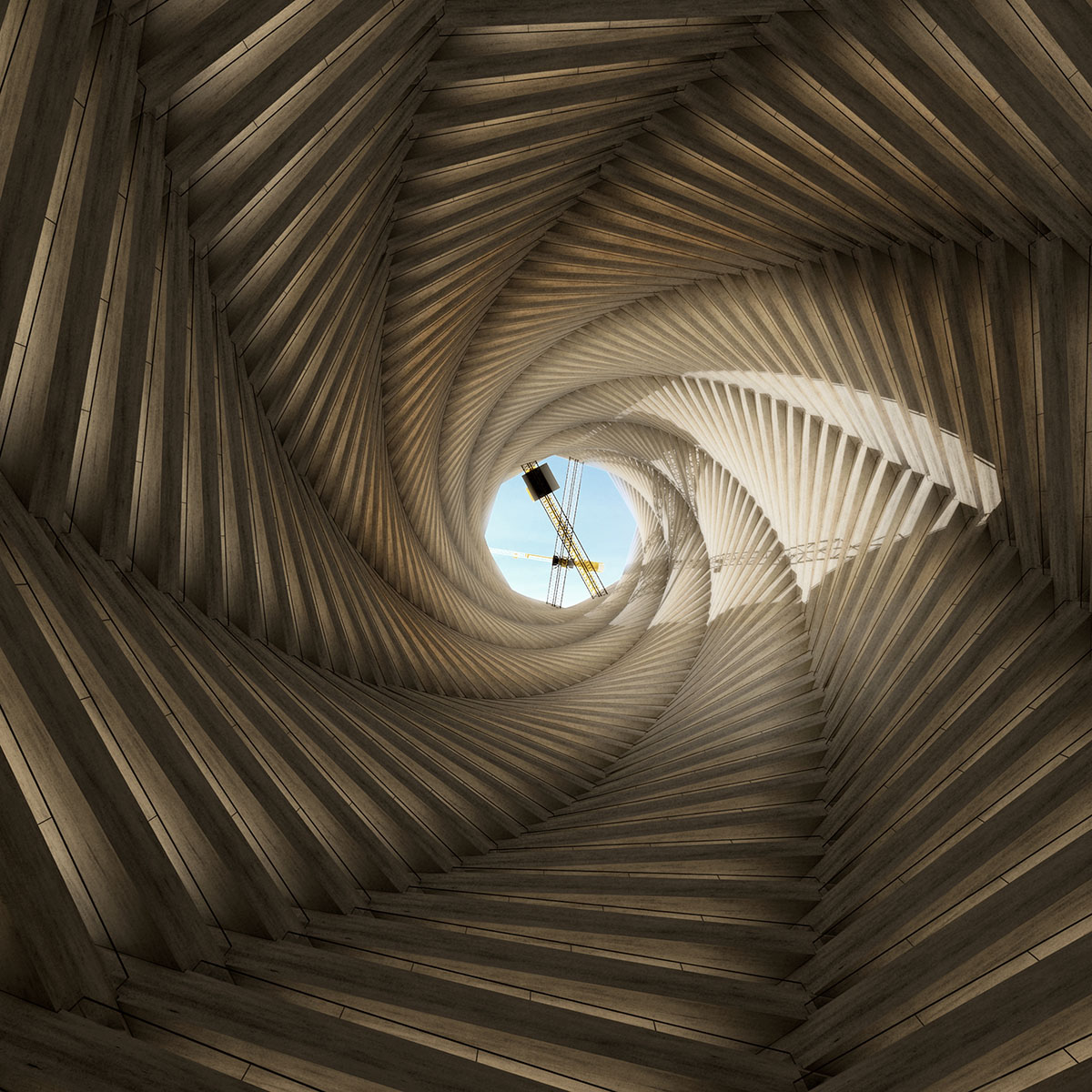 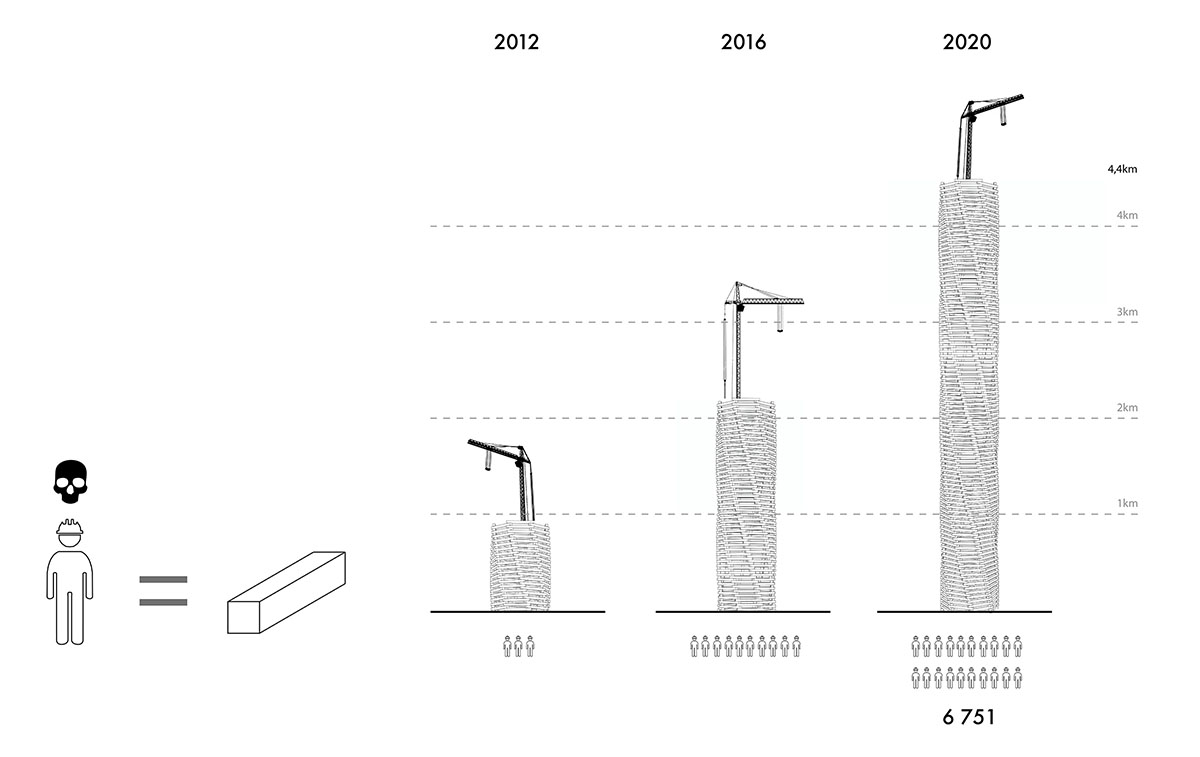 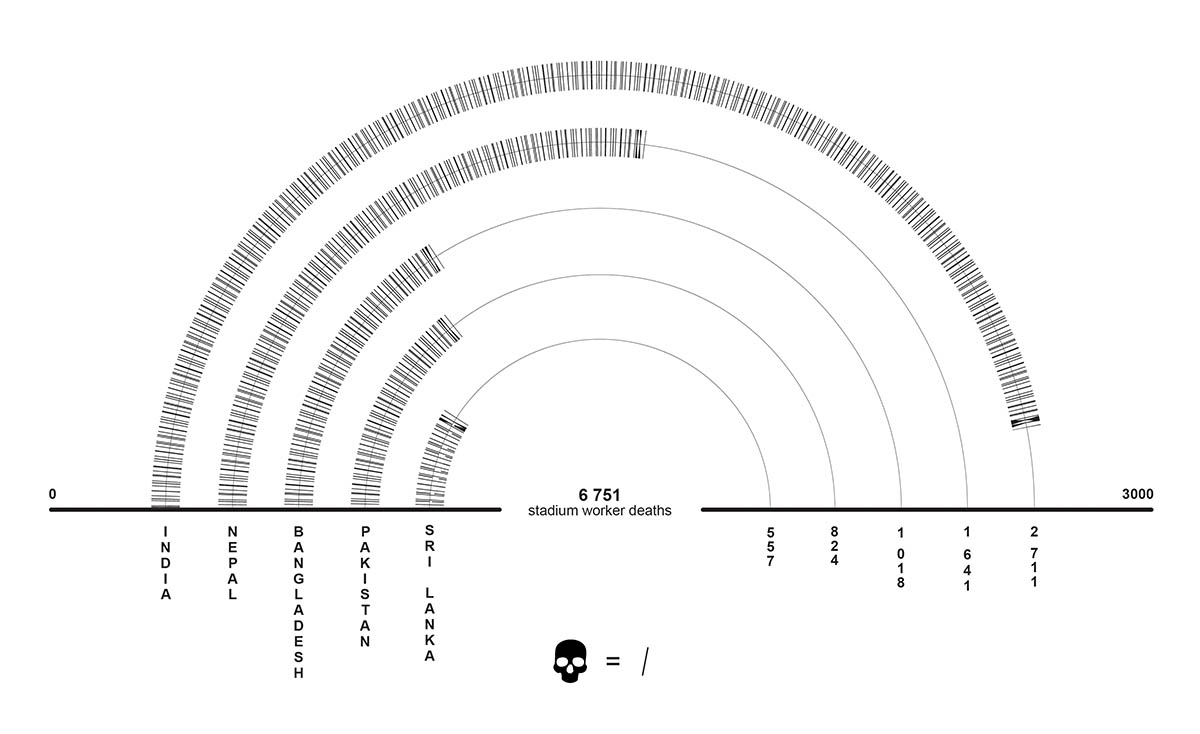 The Qatari World Cup was criticized for the deaths of thousands of workers that remain uninvestigated by Amnesty International, an international non-governmental organization focusing on human rights.

"The Qatari authorities use abusive laws to stifle those who are critical of the state, including both citizens and migrant workers," said Amnesty International in its press statement published on 16 November.

"Despite the government’s ongoing efforts to reform Qatar’s labour system, abuses remain rife across the country."

"While conditions have improved for some workers, thousands are still facing issues such as delayed or unpaid wages, denial of rest days, unsafe working conditions, barriers to changing jobs, and limited access to justice, while the deaths of thousands of workers remain uninvestigated," the organization added.

All images courtesy of WEEK Architecture.