Carlo Ratti Associati unveils design for a business canteen in the countryside of Palma, Italy 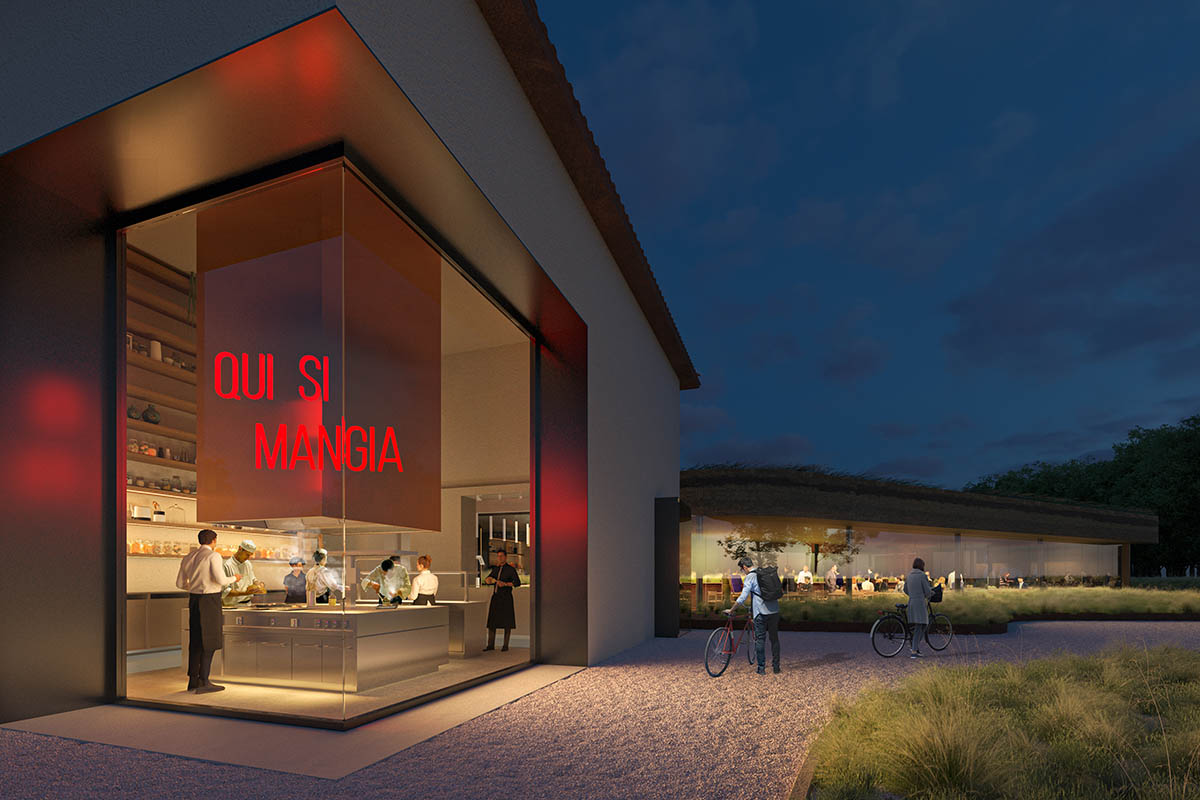 International design and innovation office CRA-Carlo Ratti Associati has unveiled design for a business canteen which is set to be built in the countryside near Parma, Italy.

Named The Mutti Canteen, the large dining hall is sculpted in Italy by cutting out a piece of land and raised it above the ground.

Developed for Mutti, the leading European producer of high-end tomato products, the project is currently under construction and is expected to open to the public in 2023.

Envisioned as "a spacious, luminous piece of architecture", the curve-shaped dining hall is created directly from nature, and will serve factory workers and external diners alike. The building will be run by a culinary team known for its Michelin-starred restaurants.

The building features a dining hall with a green roof that will made of compacted soil taken from the earth directly below it. 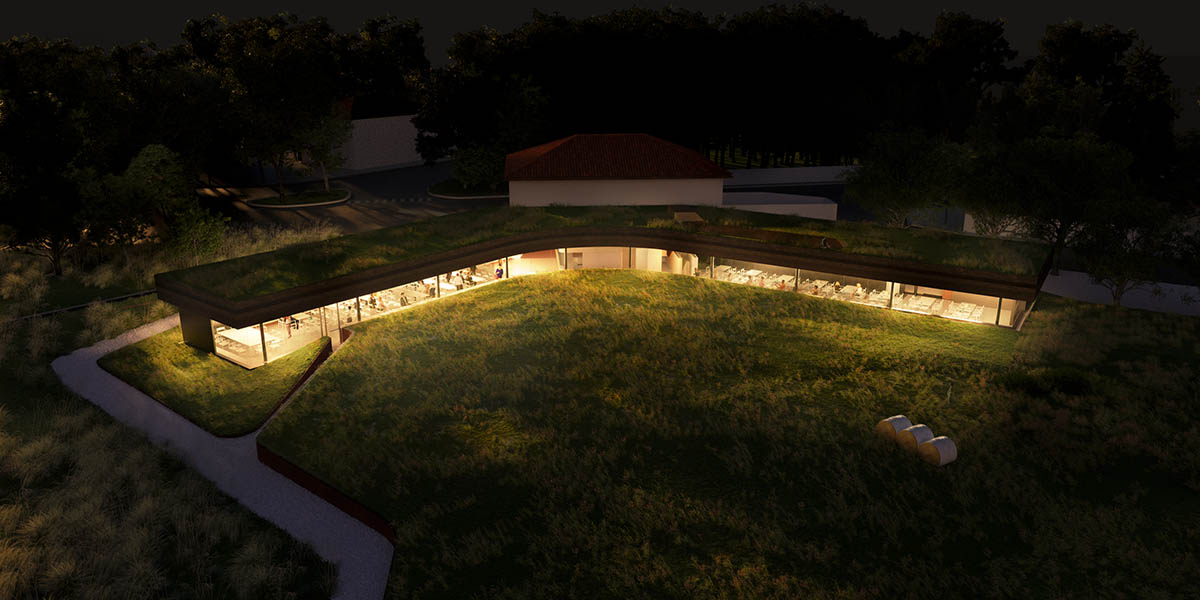 The hall itself is enveloped by a recessed glass structure so that dinners could be fully immersed in vegetation, eating at the same level of the exterior meadow.

CRA is working in collaboration with Creative Lead Italo Rota on the project. Located in the small town of Montechiarugolo near Parma, in an area known as “Italy’s Food Valley”, the project is developed as part of the evolving master plan for Mutti’s new headquarters - which is being designed by CRA with the aim to better integrate the factory area with the neighboring areas.

The new dining facility will be run by a culinary team renowned for its Michelin-starred restaurants, and will be accessible both to the company’s employees and to the general public.

Adjacent to the new dining hall, CRA will also refurbish an old tavern, visible from the main street, and will serve as the canteen’s kitchen.

"We started from a rather simple and primordial gesture: carving land out of the earth," said Carlo Ratti, founding partner of CRA and professor at the Massachusetts Institute of Technology.

"But there is a catch: this simple act is made possible by advanced technologies for construction and climate control. The canteen for Mutti advances our quest to merge the natural and the artificial worlds," Ratti added.

The studio adopts the principles of circularity throughout the building. One of the key principles is that CRA plans to recycle the discarded tomatoes from Mutti’s production line to create resin that forms part of the interior space.

By implementing environmental control technologies inside, these are aimed extensively to reduce energy consumption. And outside the built space, a 1.1-hectare garden devised by landscape architect Paolo Pejrone builds on the bounties of the local region.

The canteen forms a coherent unit with the tomato processing plant and other buildings in CRA’s masterplan for the Mutti estate. 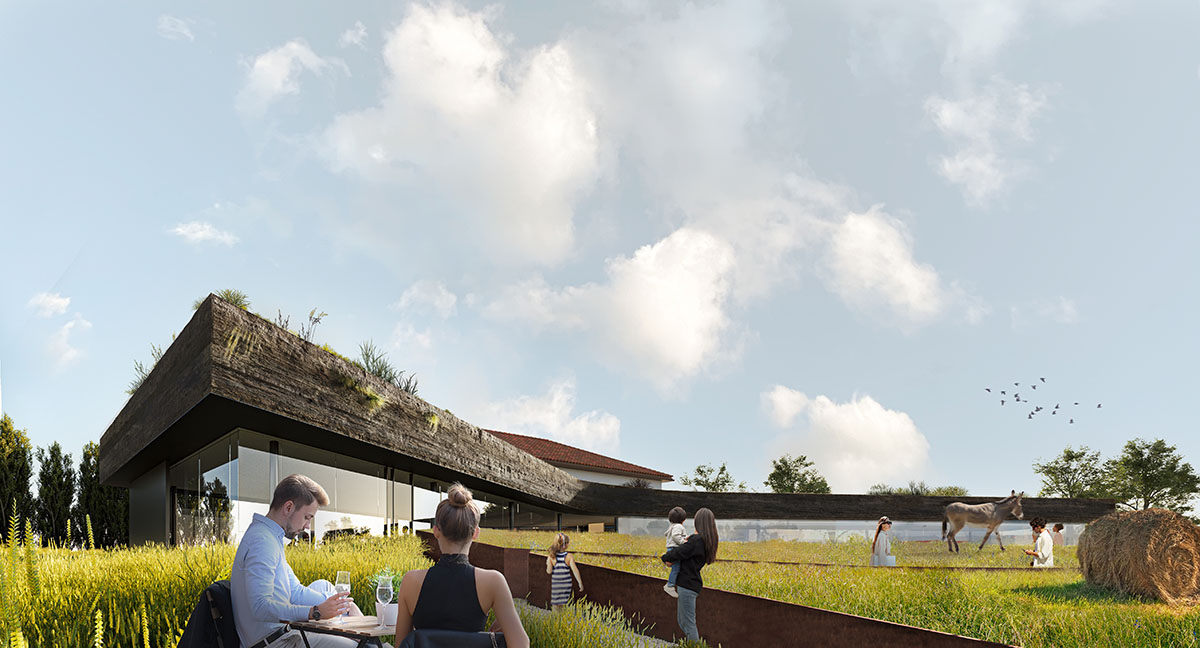 An earlier step in this process was the construction of The Greenary, a residence for the brand’s CEO Francesco Mutti that features a 10-meter-high tree in the center of the living space.

"The Mutti Canteen is the optimal reflection of the core values of our company," said Francesco Mutti.

"First and foremost, it contributes to our workers’ well-being and sense of belonging. Besides that, it fulfills an educational purpose to demonstrate the vision of Mutti, its dedication to agricultural traditions and gastronomic innovation."

"In some respects, the design is a modern response to Edouard Manet’s painting Le Déjeuner sur l'herbe,” says Andrea Cassi, partner in charge. “But instead of picnicking on top of the grass, we are able to eat underneath it and imagine new ways of engaging with the natural environment," Mutti added.

Several recent CRA projects have blurred the boundaries between the natural and the artificial, experimenting with new construction methods and circular materials.

The Italian Pavilion at Expo 2020 Dubai, designed by CRA and Italo Rota, with Matteo Gatto and F&M Ingegneria, was developed as a “living lab” to advance the concepts of circularity in architecture, incorporating materials such as coffee grounds, recycled plastic and algae into the structure.