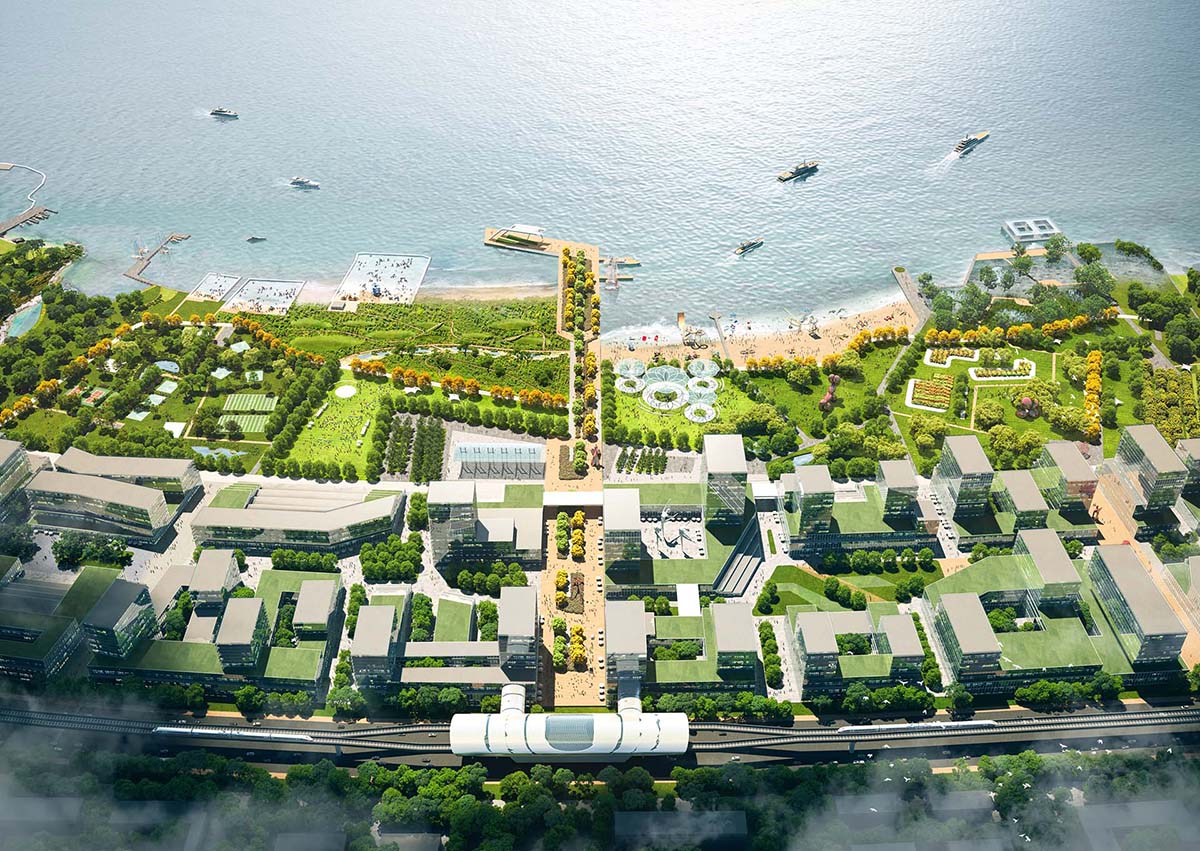 The proposal, called Yantai Seafront Garden, will transform the underused coastal area bordering the city of Yantai into a vibrant, international urban district with a beautiful natural coastline.

The masterplan of Yantai Seafront Garden, incorporates various scales and is rooted in the city’s evolution from North-eastern China’s historical open gateway to an Economic Development Zone. Yantai Seafront Garden will develop a planning strategy for the entire area, as well as a set of detailed spatial frameworks.

KCAP created an overall scheme for a 95-km-long stretch of coastline, with 27,3 km2 consisting of coastal space. Within this larger territory, the design team puts an extra focus on an 18-km key design area.

The design team drafted in-detail designs for a section of approximately 1 km2 within this 18 km area. 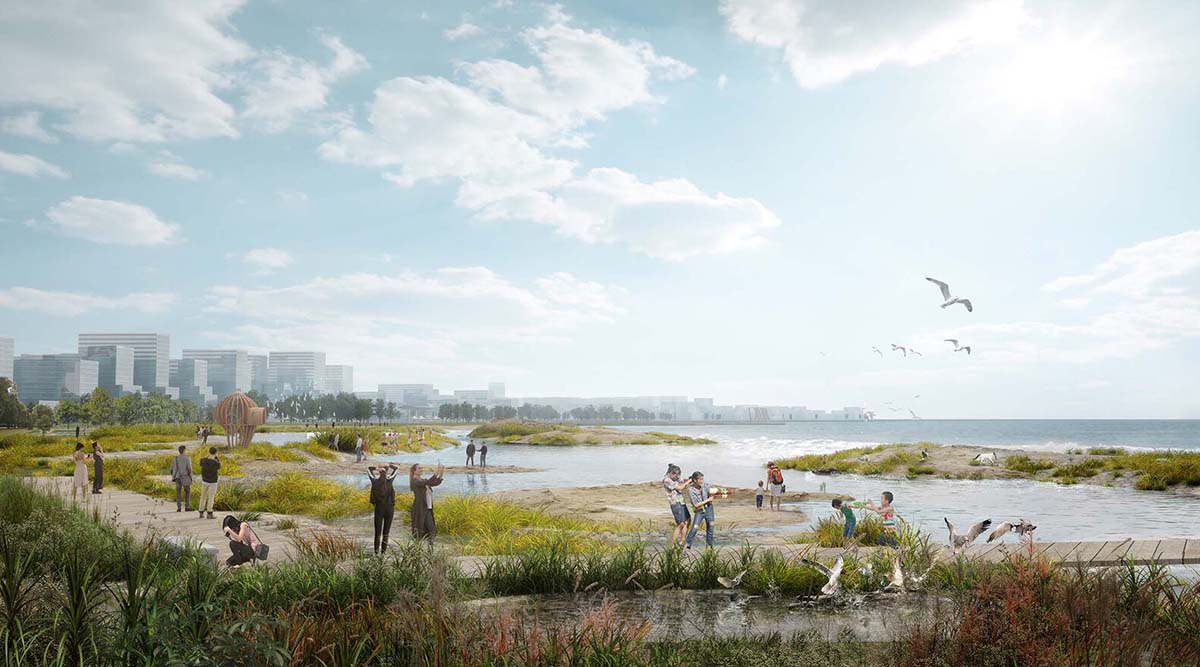 "In our view, a coastline is never just a simple ‘line’ but a system that encompasses all the elements around it. In the case of Yantai, this means a multidimensional approach was needed that includes the city, mountains and coastal landscape," said Ya-Hsin Chen, Associate Partner at KCAP.

"The redesigned coastline had to be extensive, an integral part of the existing urban space. It should also be inclusive, respect the existing while at the same time being innovative and geared towards active lifestyles."

"And, as with any long term planning strategy, it should be adaptable. The planning and management of a project on this scale is always a dynamic process, and every step forward is a pre-set and triggers the next actions and projects," added Chen. 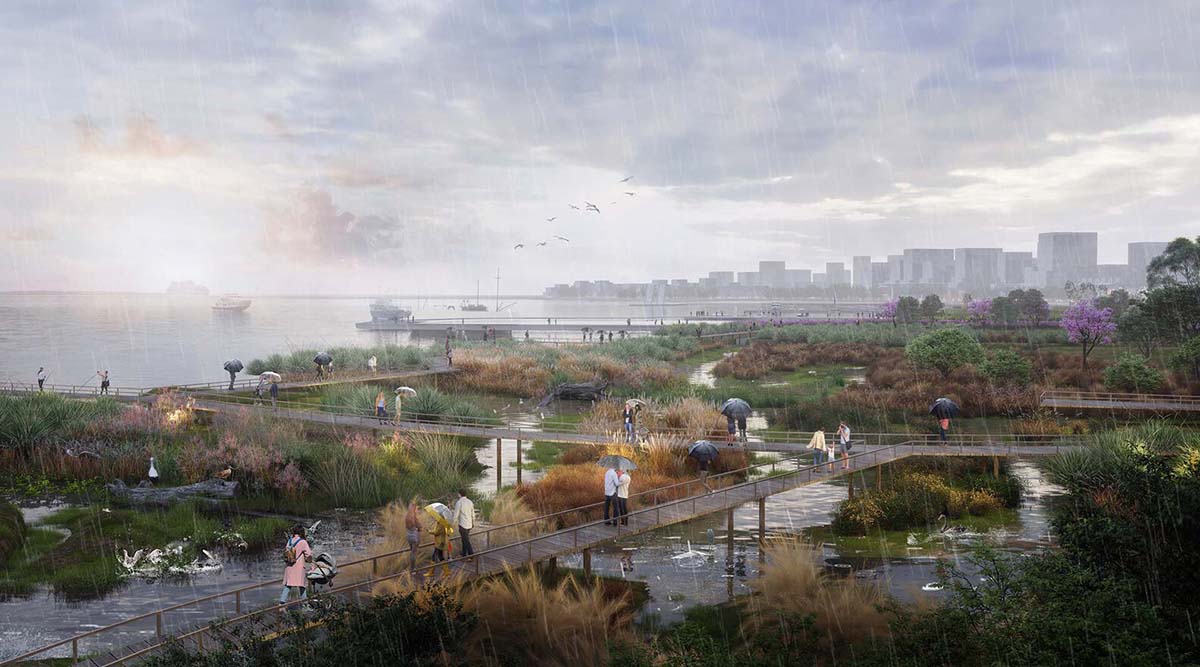 The planning area includes four distinct ‘habitats’: the zone between the mountains and city, which will be deployed for water containment; the actual urban centre, set up as a sponge city; the coast, conceived as a resilient tidal area; and the sea itself.

"To ensure that the development of both city and coastline are safe ánd ecologically founded, we adopted a strategy of shoreline restoration, protection and fortification, and a triple protection strategy - offshore, in the tidal zone and with a coastal dike," explained Ruurd Gietema, Partner at KCAP. 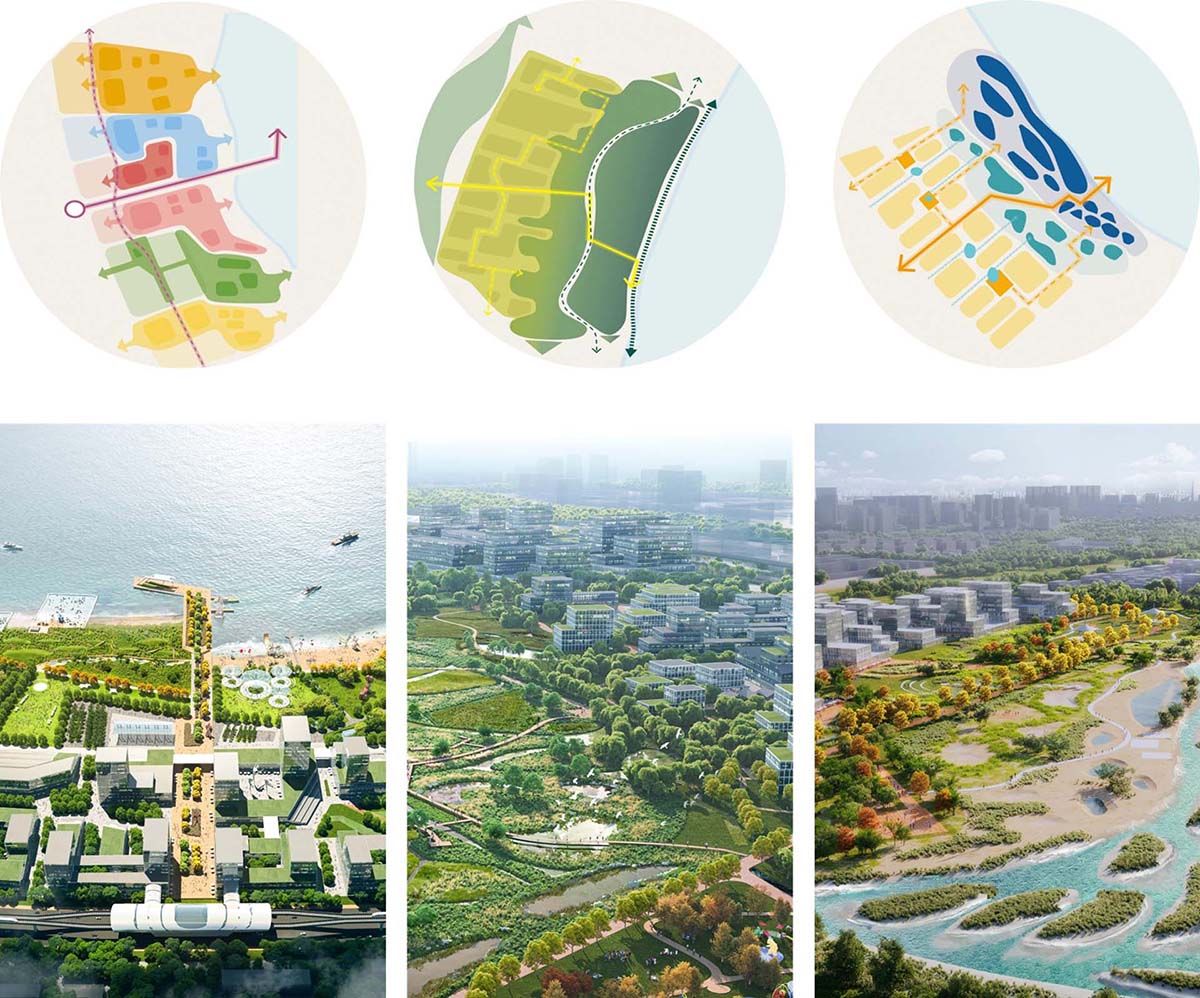 Key features in the masterplan include the restoring of the coastal areas, by returning the artificial coastline and production facilities (i.e. fish ponds) to nature, and implementing measures that protect it from erosion while creating new ecological habitats.

Aiming to rebuild the connection between the mountains and sea, the design team will create continuous natural areas, while the ecosystem will be restored, which will foster biodiversity. The scheme also promotes the development and transformation of Yantai into a community based in ecology, and aims to prevent abrupt, ad-hoc urbanization which could lead to further fragmentation of the natural areas.

Within the larger framework, KCAP brings a specific focus on an 18-kilometres key design area due to its potential. "Being the most open, green gateway it can act as a driving force for the overall development," said KCAP in its project description. 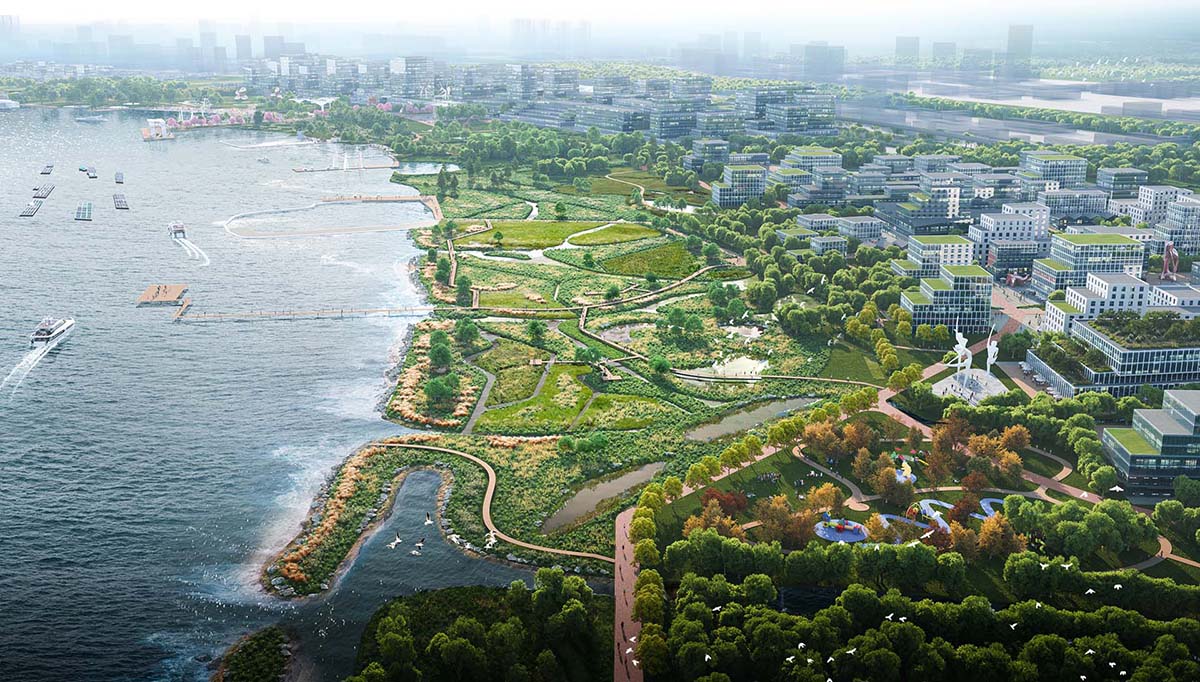 Especially, within this development, the team gave special attention to the design of one singular area, called International Communication Bay.

Within this 1 km2, detailed-landscape design area, the design team defined three main clusters: the Talent Port, the Tidal Community and the Lagoon Community.

Talent Port draws a distinctly urban cluster and includes a host of public functions, to be built along a central axis connecting the rail station and the harbour. 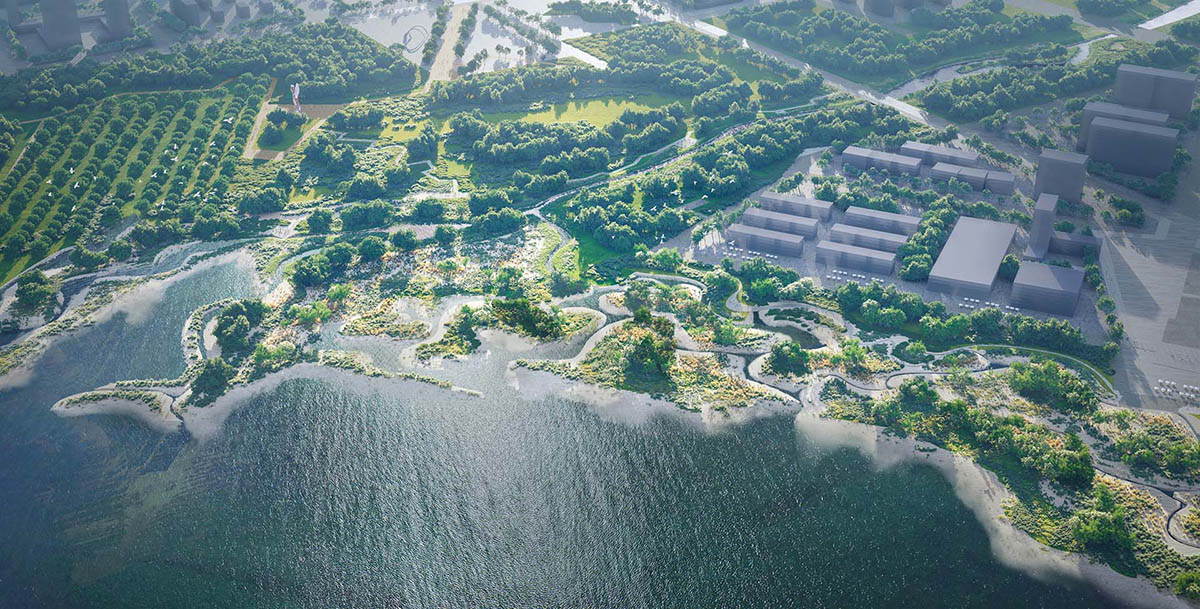 The new International Communication Center is planned to be the central feature of the masterplan, which is surrounded and supported by various landscaped public spaces like the Expo park, an open-air events space.

"In designing the Tidal Community, we drew closely from nature. We recovered the natural tidal zone by removing the road and artificial shoreline, and used the tidal movements to create salt marshes instead," KCAP added.

"By deploying the area’s natural strengths, we were able to extend the landscape, creating a transitional zone between the village and wetlands, which serves both as a unique seafront park and as an ecological habitat."

The final component is the Lagoon Community that is set in a shoreline landscape dominated by newly created, desalinated lagoons; these offer room for swimming and socialising, but also have an ecological function. The urban centre offers a range of nature-based experiences and serves as a leisure centre for all of Huangshi Talent Bay. 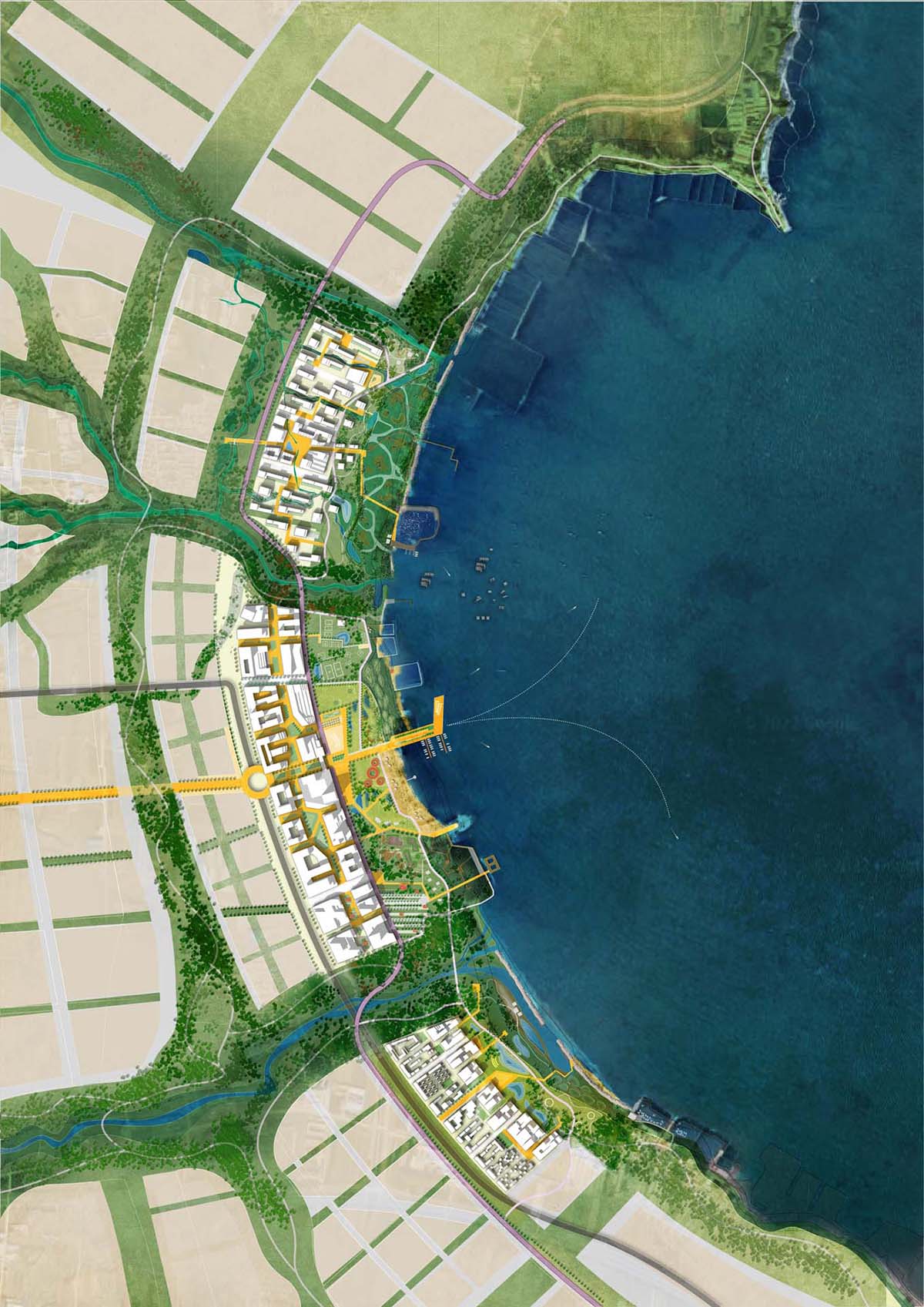 "We feel that Yantai Seafront Garden clearly illustrates our vision on integrated design. KCAP has created a planning strategy that not only respects local and natural assets, but actually considers the sea, the coastline, the mountains and the city as one. The project explores the possibilities and solutions of coastline development on different scales and themes, advocating a multi-level, sustainable approach," said Ya-Hsin Chen.

"Our aim is to integrate the landscape concept, nature conservation, a sustainable water system and urban development. Combined, these serve as the foundation for a high quality environment for both human and natural life," Chen concluded. 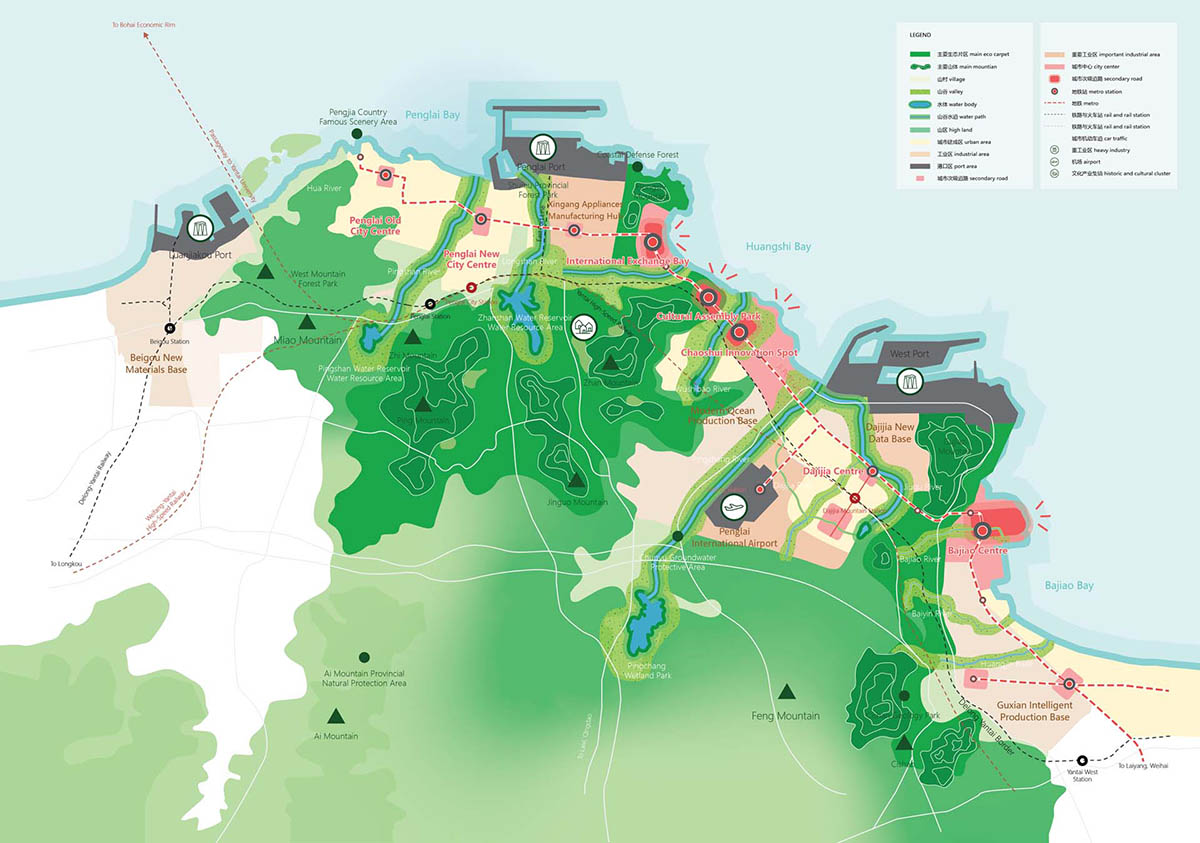 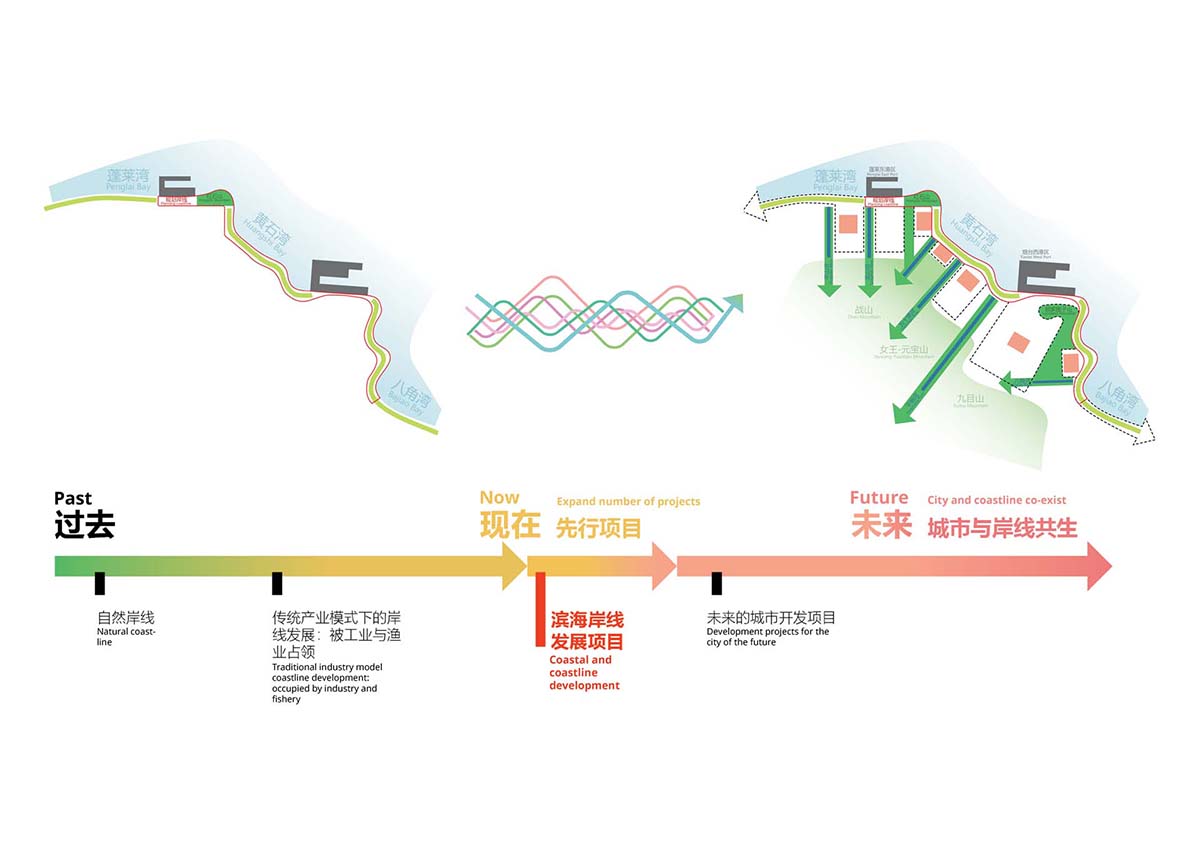 KCAP is designing the Keflavík Airport Area Strategic Masterplan in Iceland and transforming an existing military land into a green masterplan, with Lafayette, in France.

All visuals and drawings © KCAP.