Foster + Partners has unveiled design for a marine life institute that is set to be built as "the world’s first fully immersive experiential marine life centre" in the Triple Bay Marina at Amaala resort, a new luxury tourist destination on the Red Sea coastline of Saudi Arabia.

Called The Marine Life Institute, the design is modeled on the patterns of the coral reefs and in the shape of the modules, while the patterns of reefs are reflected on the texture of the walls.

The 10,340-square-meter institute is developed for The Red Sea Development Company (TRSDC), in which the company is creating a chain of 90 inhabitant islands along Saudi Arabia’s west coast.

Foster + Partners' institute will invite visitors to give a glimpse into the wonders of the marine environment and narrate the challenges people face to conserve the natural habitats. 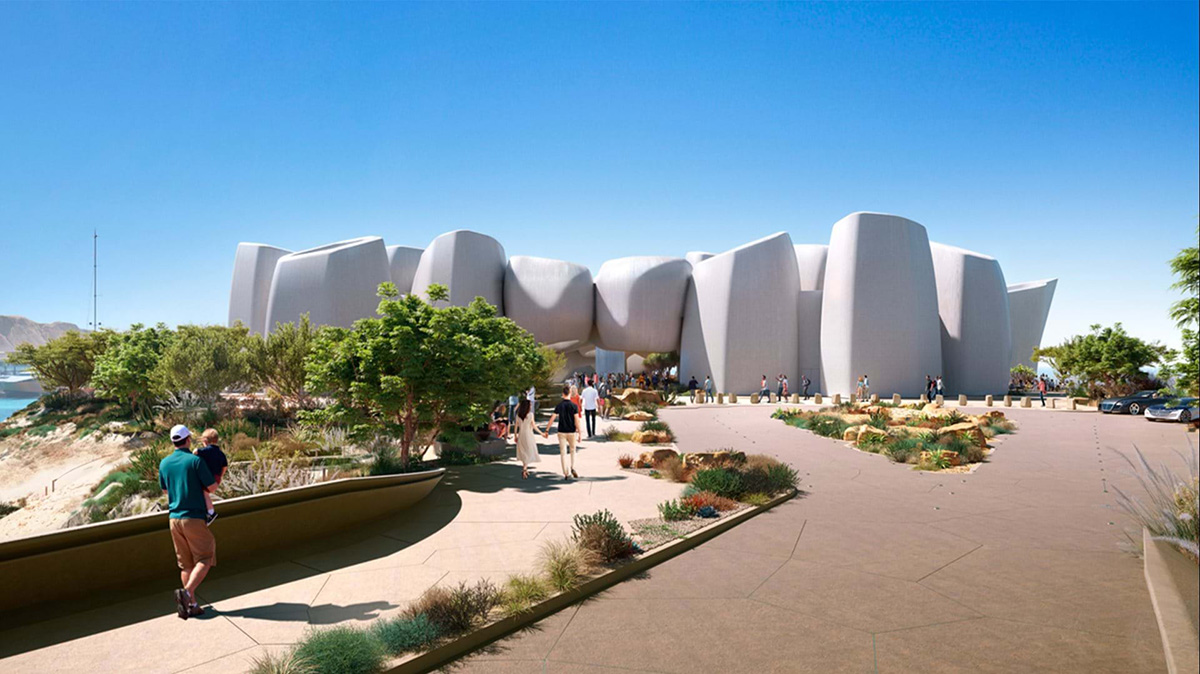 Described as "a testament to TRSDC's coral farming operations", the new facility is expected to be home to "one of the world’s largest man-made reefs", which will be 40 meters long and 10 meters deep and provide an epic “Grand Reveal” moment for visitors on arrival.

"We are delighted to be working closely with The Red Sea Development Company to realise this unique project. Integrated exhibition displays take visitors on a journey through the Red Sea, as they travel down through the building towards the immersive deep reef ‘big reveal," said Gerard Evenden, Head of Studio, Foster + Partners.

"At the heart of the space a large, suspended semi-spherical tank - a real first-of-its-kind - contains local marine wildlife within a stunning coral exhibit," Evenden added.

Expected to house up to 650 people at any one time, while guests will be allowed to walk underwater, snorkel with rare species, participate in lab tours and dive the depths of the Red Sea in a submarine.

The program of the institute will be distributed on three levels with one above ground and two below ground level, and offer stunning panoramic views of the Red Sea and the marina.

The visitors will be embraced with a journey that is "vibrant and educational", aiming to give people an in-depth understanding of the research that goes on in the institute’s labs.

The ensemble is comprised of four building clusters with a central canopy spanning all four of the buildings, while the canopy provides a shading and is opened up to sky area for ventilation.

"It starts at the entrance where visitors are flanked by colourful tanks as they walk towards the central exhibit," said Foster + Partners.

"The central canopy, which spans across all four of the building ‘clusters’ provides both shading and open to sky area for ventilation," the firm added.

Exhibition displays, including semi-spherical tanks, will also be integrated to the infrastructure of the building, illustrating the journey through the Red Sea – from shallow mangroves and sandy beaches to the immersive deep reef big reveal. The display areas are created to form "an awe-inspiring spectacle for visitors as they travel down through the building into the ocean."

Besides immersive exhibition spaces, visitors will be able to enjoy researcher-led educational tours of the laboratories, as well as underwater guided tours of the Red Sea in the latest submersible vehicles.

The institute consists of private offices that are naturally lit and private offices feature screens that shades the windows and skylights. According to the studio, screens are derived from the intricate pattern of corals, filtering dappled light into the interior spaces.

"We wanted to design a first-of-its-kind facility that extends far beyond any existing marine life attraction," said John Pagano, CEO of TRSDC.

"With 10 zones that provide everything from augmented reality experiences to night diving, and spaces for the scientific community to effectively progress their environmental projects, the Marine Life Institute is undeniably unique."

"Not only will it drive global green and blue innovations, it will also help put Saudi Arabia on the map for travelers seeking trips that enrich their lives," Pagano added. 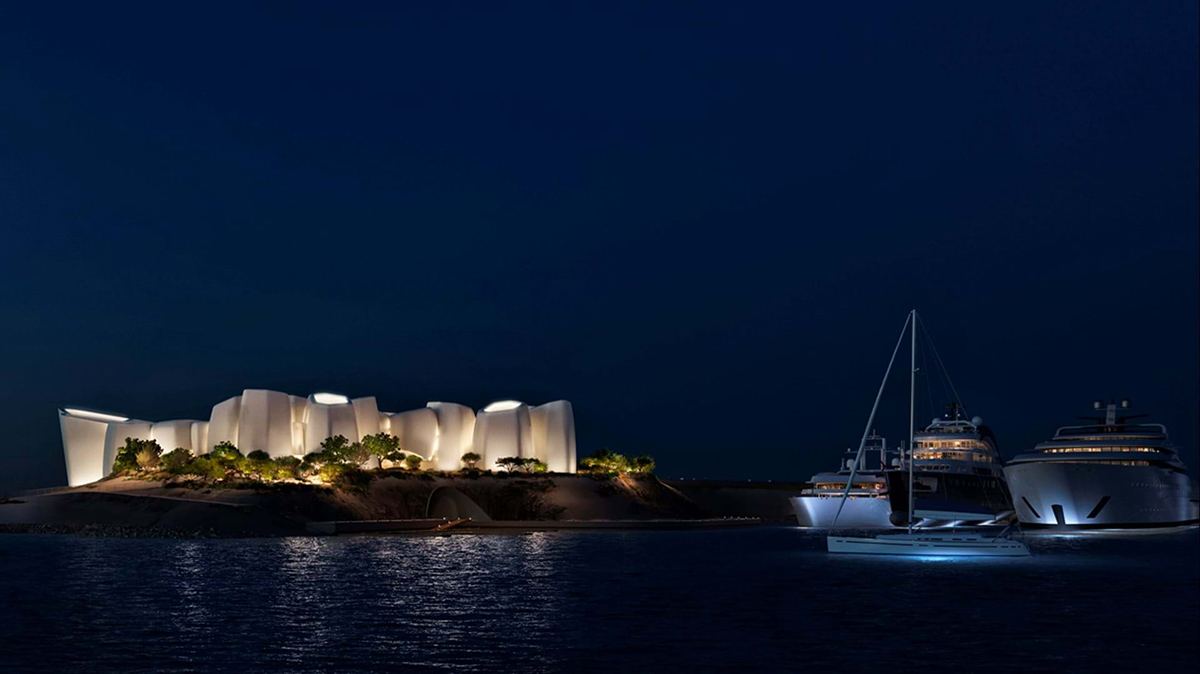 Inspired by the Red Sea's thriving coral formations, the structures will be made of glass-reinforced concrete panels supported by a structural steel frame to employ lightweight construction.

Organically brought together, the structural modules "will be intricately molded to resemble reef patterns against the skyline."

"The structure is effectively supported on four points, with a large canopy that shades the central plaza, which offers panoramic views of the Red Sea and the marina," said Foster + Partners.

More than 40 per cent of the Marine Life Institute site will be covered in native plants. The building will also have a system to collect runoff water in order to prevent erosion and pollution, while also reducing the mains water use.

To prevent light pollution and to protect the nocturnal environment, the studio will devise a lighting system with an innovative framework.

"More than just a window into the marine world, we’re creating an integrated experience that offers unique activities for our guests, with a collection of opportunities to explore and learn suited to all," said Warren Baverstock, Senior Marine Life Director at TRSDC.

"The overlay of sustainable design, build and operations, guest experience and meaningful scientific work underpins our commitment to drive enhancement of the environment and tourism growth. It’s a perfect model of sustainability, balancing people, planet and commercial success," added Pagano.

Site preparation works with bulk earthworks are now complete. TRSDC will now begin piling and shoring before excavating 12 metres below the surface water level for the institute’s Grand Reveal aquarium.

The Marine Life Institute is part of phase one of Amaala Triple Bay, which is set to accept its first guests in 2024.

Amaala – Triple Bay – is one of large-scale projects in Saudi Arabia, as well as The Read Sea Project. The destination will consist of eight resorts offering upwards of 1,200 hotel keys.

Foster + Partners is also designing a new ring-shaped hotel on Saudi Arabian island and a coral bloom resort on Saudi Arabia's Shurayrah Island alongside a new Red Sea International Airport which is currently under construction.

All images courtesy of Foster + Partners.