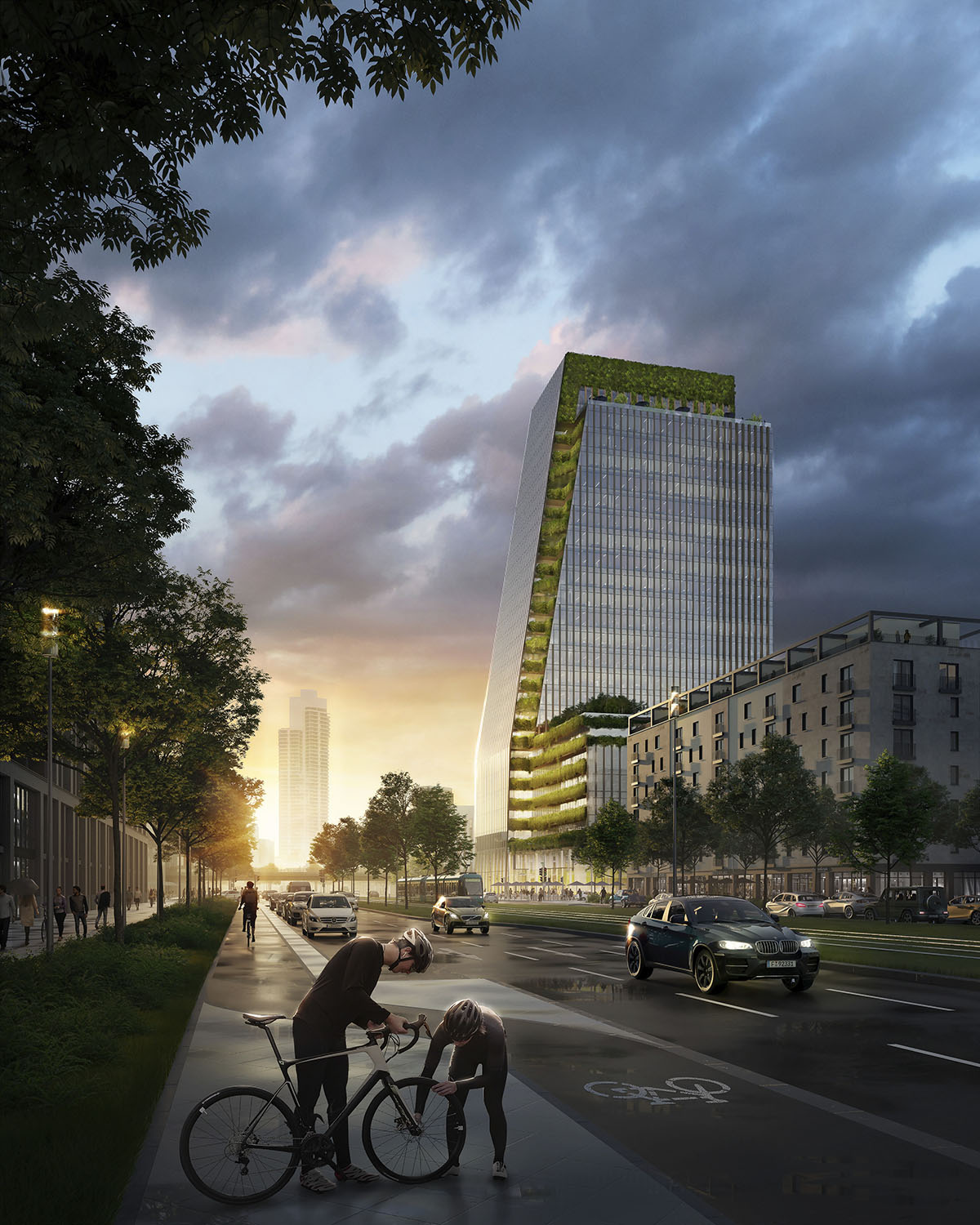 UNStudio has unveiled design for an office tower which will be "one of the most sustainable office buildings" in Germany.

Called NION, the 45,000-square-metre state-of-the-art office tower is set to be built in the Europaviertel in Frankfurt, Germany, which was recently selected by Germany-based company Groß & Partner for further development.

If everything goes on a plan and completed, the office tower will be "one of the most sustainable office buildings in Germany", which breaks grounds both technically and architecturally. 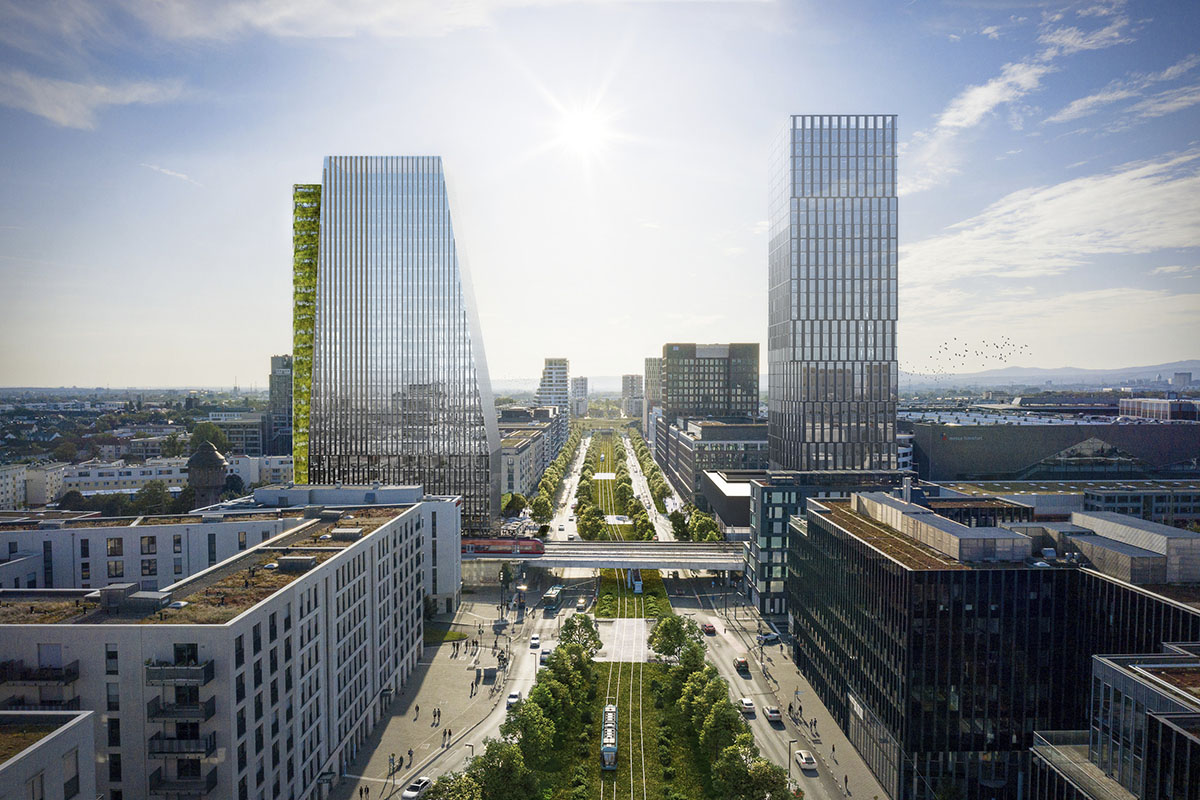 The tower complex incorporates ESG objectives and highly efficient, resource-saving technology, according to the studio.

The office tower is situated in the Europaviertel West, at the interface to the Europaviertel East in Frankfurt. This lively hybrid city district, combining residential, work and recreational facilities, which has been in continual development since 2005.

"A comprehensive sustainability and ESG approach for NION has been at the forefront from the beginning," said Jürgen Groß, managing director of Groß & Partner.

"The tower will offer great added value to its surroundings, not only in terms of design, but above all climatically and ecologically."

"The sustainable concept for NION focuses on both environmental and social sustainability. Alongside intensive greening throughout, DGNB Platinum Certified NION employs a low-carbon load-bearing structure," added the studio. 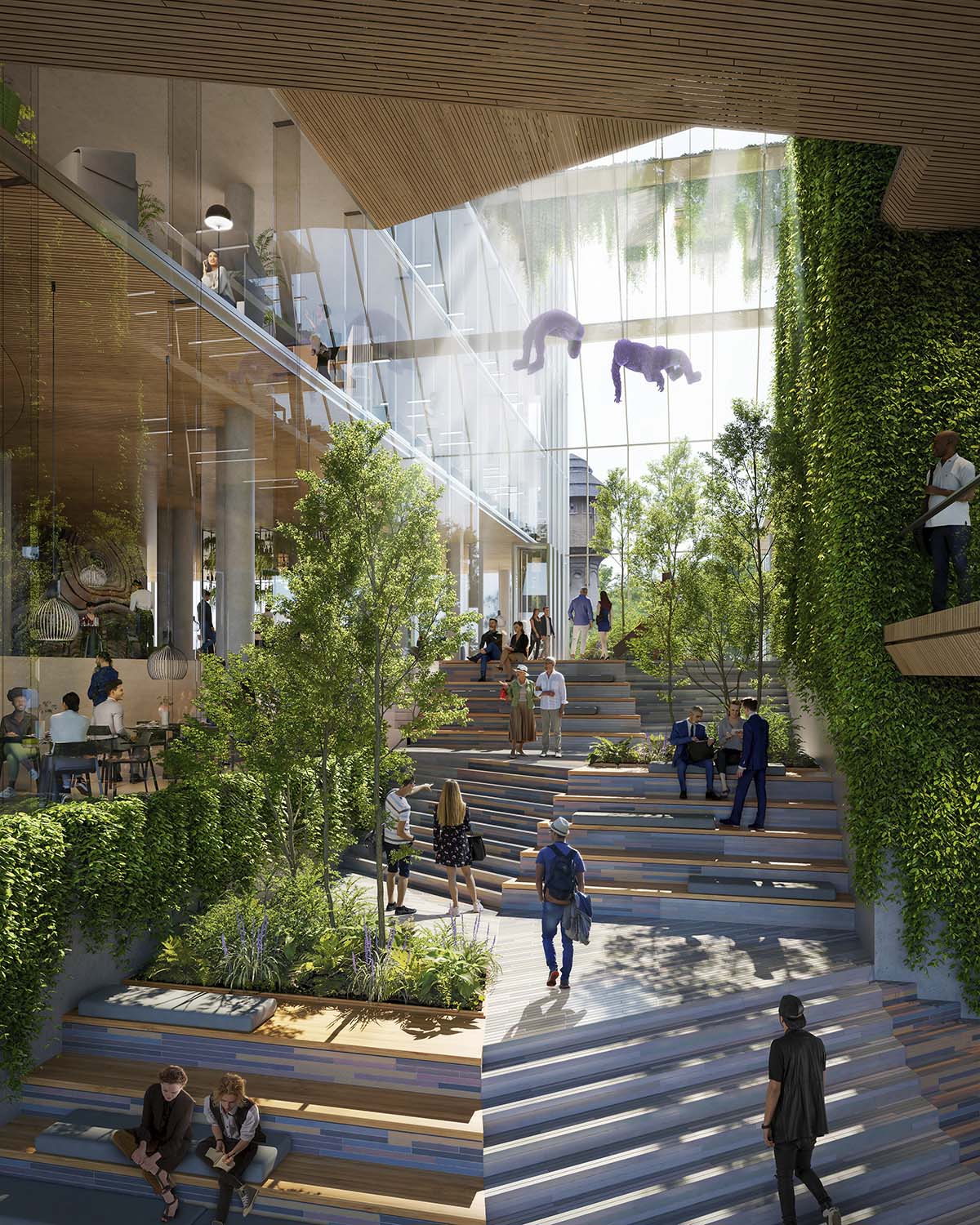 In construction, UNStudio will use prefabricated components, alongside a modular supporting structure. The design will also integrate sustainable, recyclable and circular construction materials.

"The sustainable concept for NION further responds intelligently to the weather and actual demand," the studio explained. 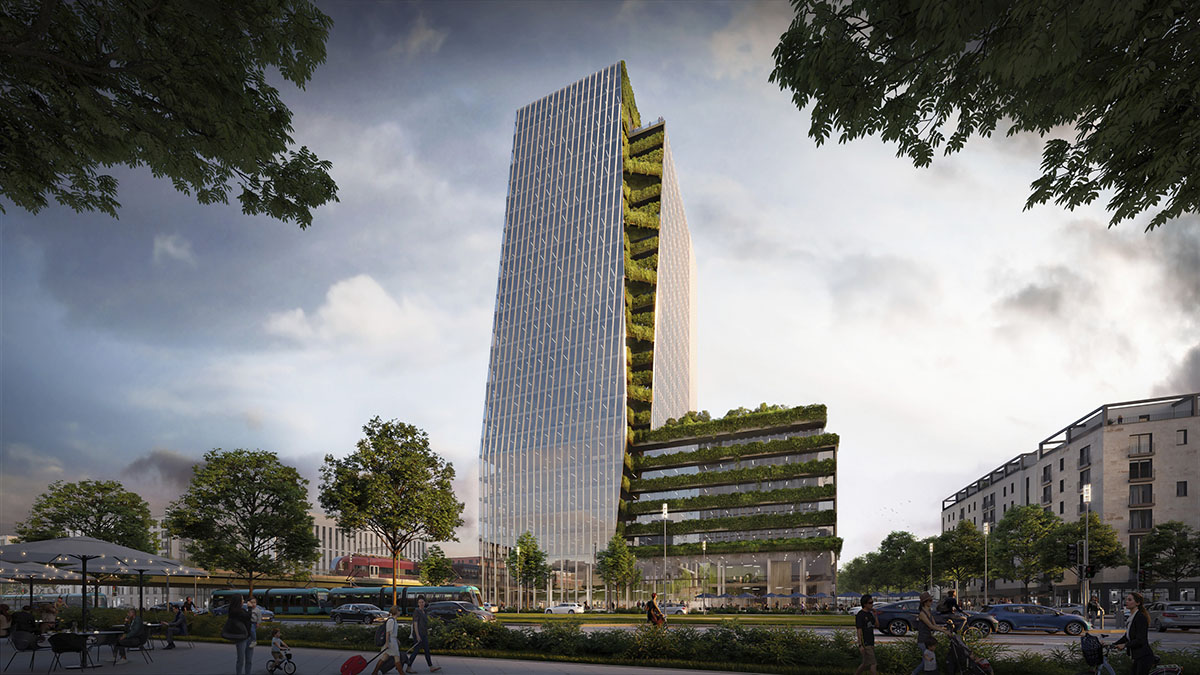 Additionally, semi-public use spaces are incorporated by way of dining establishments, a bakery and a café on the ground and first upper floor, alongside the inclusion of partially public urban space in front of the base building.

Besides passive design strategies and state-of-the-art building technology, the team plans to integrate a plenty of greening that plays a large role in the design of the project.

"As an integral part of the Europa-Allee urban green corridor, the site is intended to be a vehicle for greenery and biodiversity, bringing ecological benefits to the environment, while improving the microclimate and contributing to the well-being of visitors and users of the building," the studio added.

The design consists of two intersecting volumes, where the northwest and southeast corners are cut away to create a striking vertical effect, emphasised by lush greenery.

The cubature responds to the proximity of surrounding buildings and to NION’s prominent position next to the park, by way of angled facade surfaces that contrast dynamically with the cut-out corners. These cut-outs taper from the seven storey base building, picking up the lines of the surrounding perimeter block development and unifying the different urban scales. 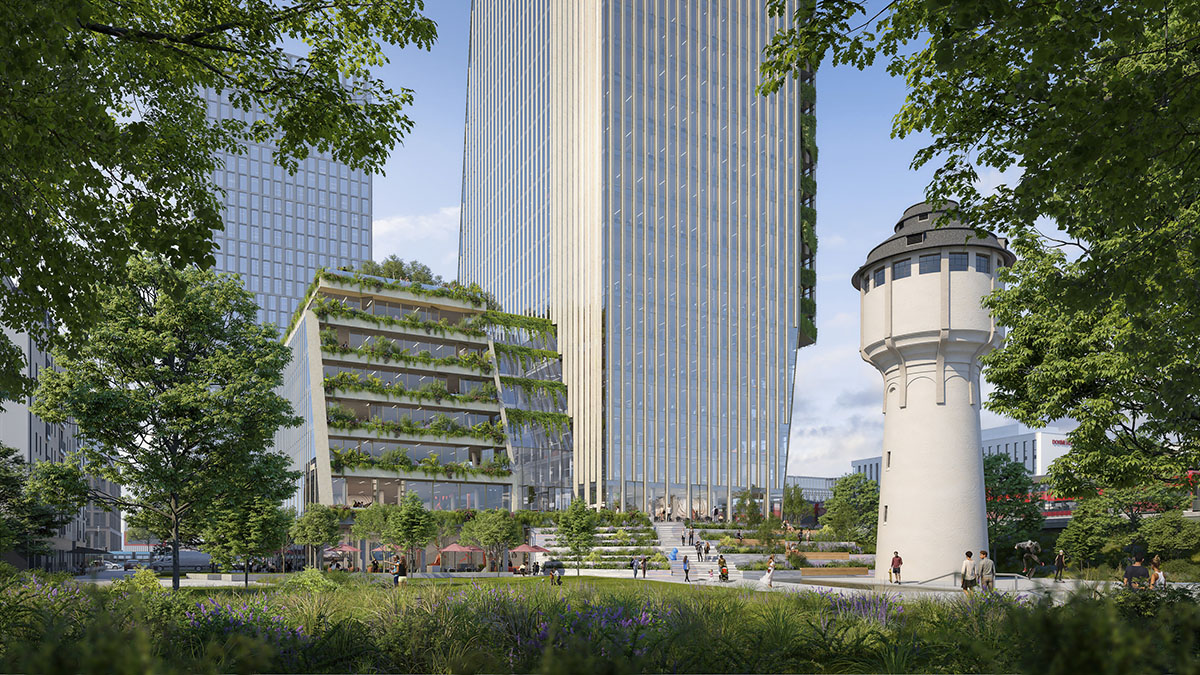 The vertical intersection of the inner corner on the northwest side also divides the building into tower and podium, giving the building a more slender appearance.

While the green corners of the building create a striking focal point on the route into downtown Frankfurt, the wide facade elevations are structured by light and dark elements to create differentiation within the volume. 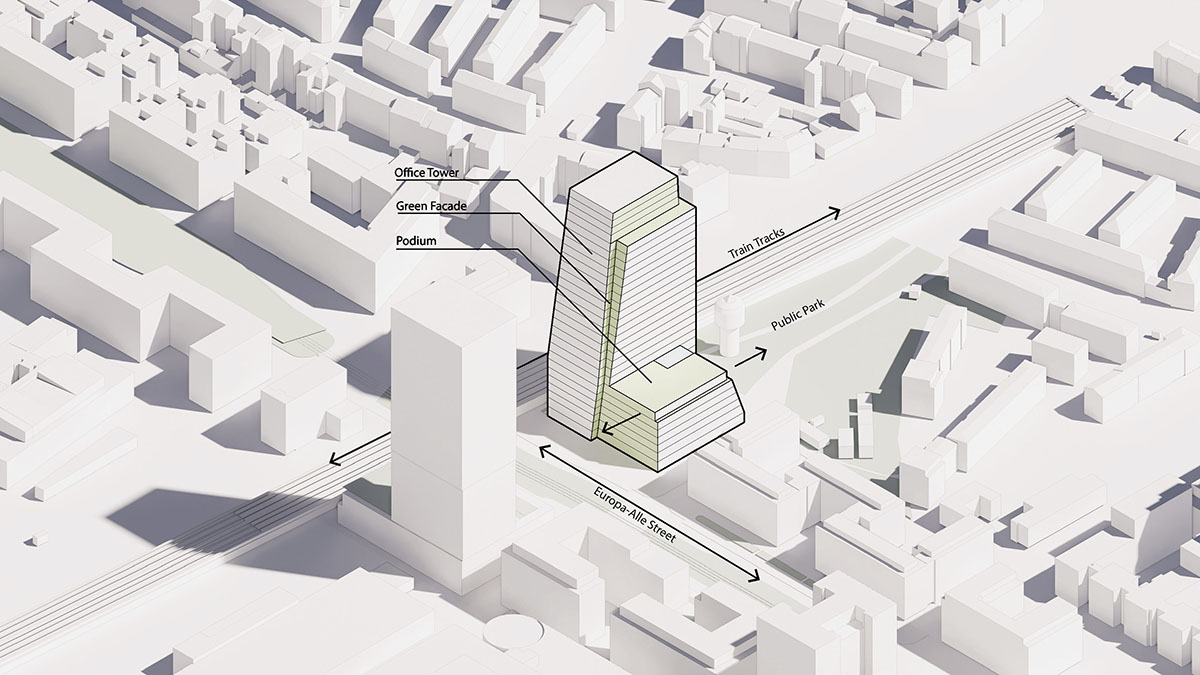 While the vertical green in the external articulation anchors NION within the cityscape, further greening plays an important role throughout the project.

From the green lobby, to the semi-public interior space in the base, to the green zones in the office floors, which are combined with green terraces and roof gardens. All of the spaces in NION are designed to enhance the working climate and create an exciting relationship between interior and exterior. 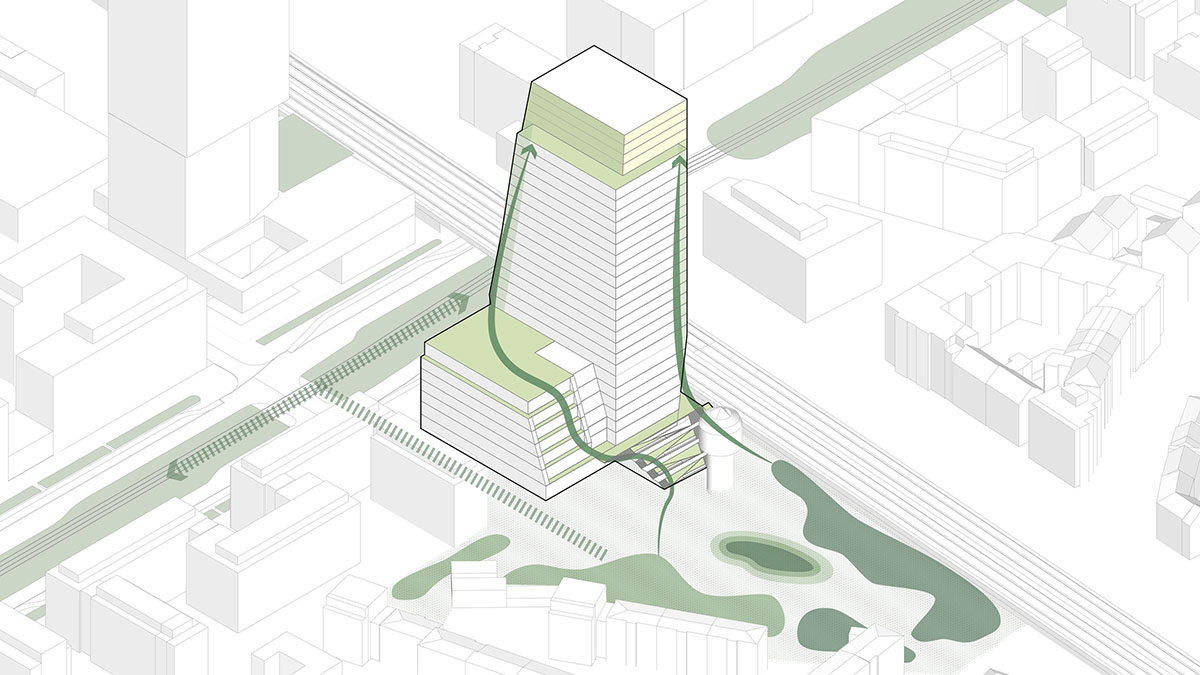 UNStudio is also currently working with Groß & Partner on the currently under construction FOUR project in Frankfurt, one of the most dense inner-city developments in Europe.