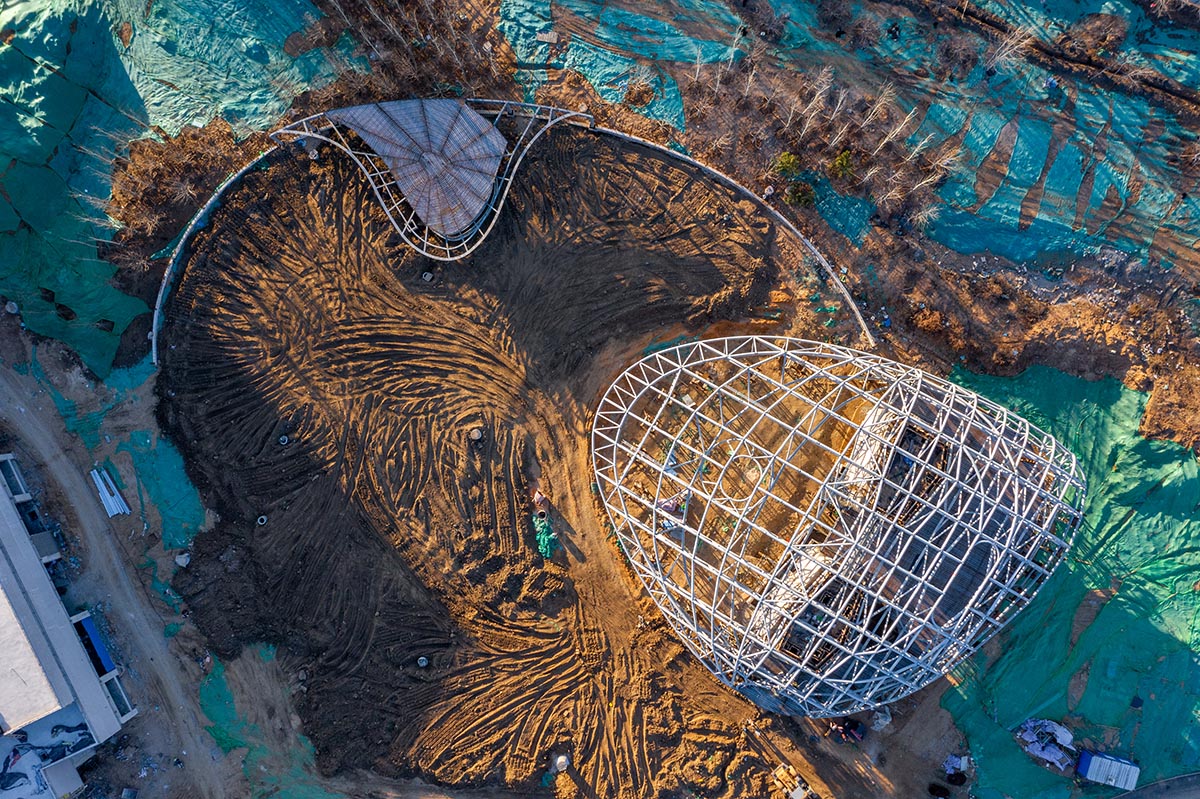 MAD Architects has shared the latest construction details of its multi-purpose floating center in Qinhuangdao, China.

Named Aranya Cloud Center, the  2,579-square-metre building is nearing completion for Aranya Community in Qinhuangdao, a port city 160 miles east of Beijing, China, with a population of over three million.

The programme of the building consists of a grand hall, a gallery and a small theatre in a fluid geometry. The project, led by Ma Yansong, will serve as a much-needed public art space for the bustling artistic seaside community. 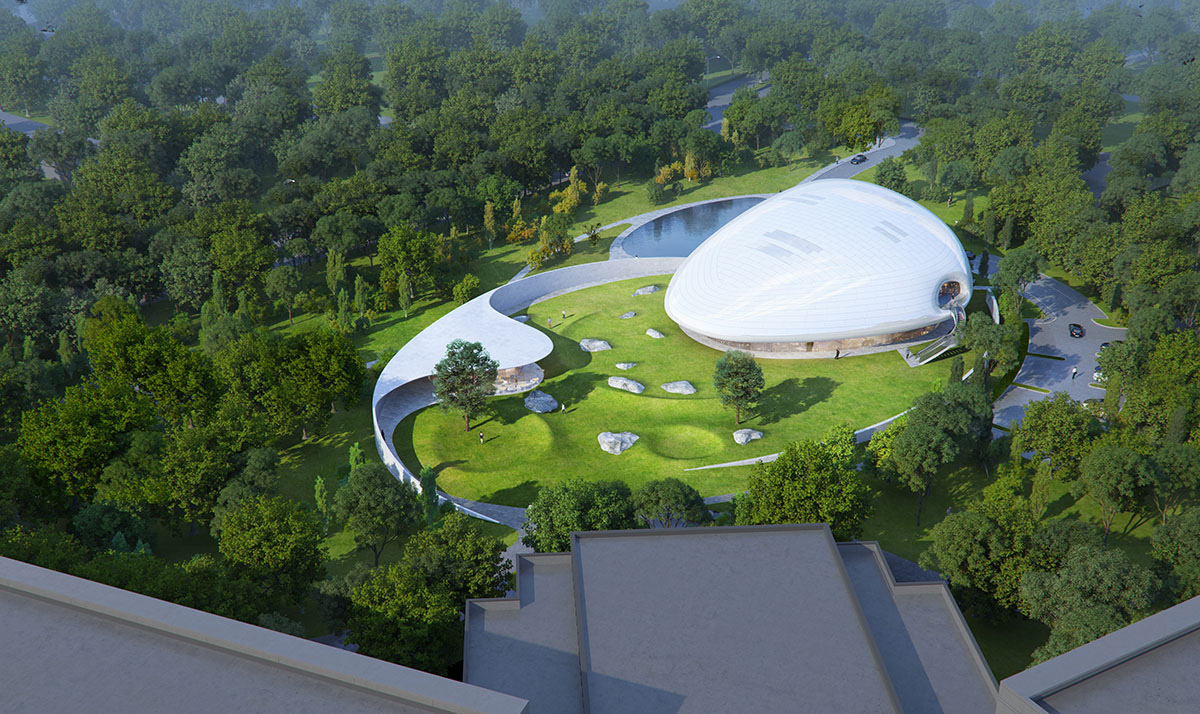 Conceived as a “white stone garden", from the outside the building will mark the center of a sculptural landscape. As it can be seen from the photographs, the steel skeleton of the building is almost complete. MAD first released its conceptual design in 2021.

The MAD team envisioned the Cloud Center as a singular architecture that becomes the component to a larger context. The site comprises a reflective pond, a garden, and surrounding woods, which complements the building in a peaceful environment.

MAD takes inspiration by the shape and lightweight appearance of clouds, the gallery, situated in the main volume, is engineered to appear as though it is floating above the rolling landscape that surrounds it. 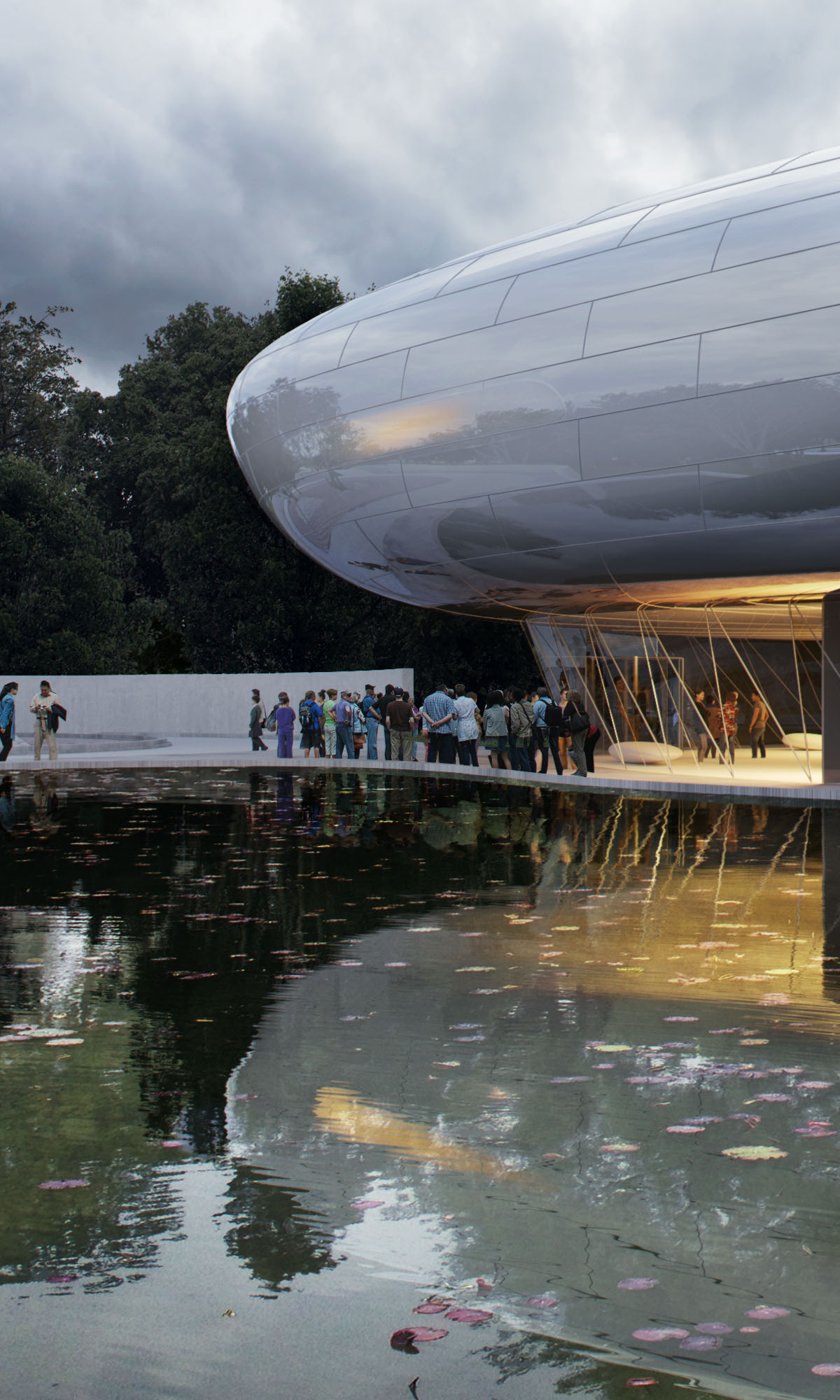 "This effect was made possible through the creation of a number of structural overhangs that are embedded within the envelope as an internal space frame," said MAD in a project description.

"The main and secondary truss suspensions are welded to the steel structure of the core, the largest of which are nearly 30 meters in length."

Thanks to that, the gallery is almost built entirely as a column-free area that allows a wide variety of functions while concealing its means of structural support. 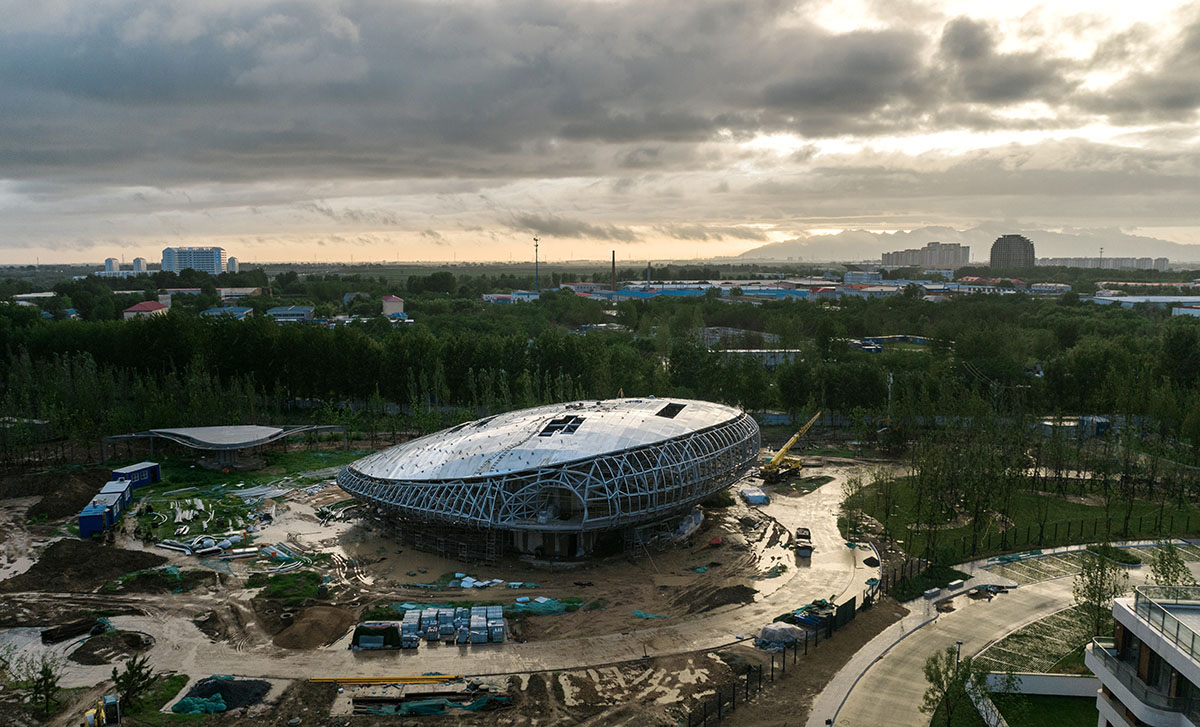 To provide smooth finishing on the façade, the team uses an optimized curtain wall system and its complex curvilinear geometry which allows a limited amount of double-curved glass embedded within the envelope under an anticipated construction cost.

MAD explained that "the main volume is clad in a curtain wall of white glass panels that have been tempered, laminated and laser-printed to reflect the sunlight, sky and verdant landscape that surrounds it, which was also designed by MAD Architects as a tranquil oasis that contrasts the busy city life just beyond its perimeter; like a real cloud, the building will take on the colors of the sky throughout the day thanks to its glossy paneling system."

"When visitors walk from the windy road to the main entrance of the Cloud Center, they are met with a large pond that reflects the underbelly of the white structure, as though it was just like the many clouds in the sky above it, to produce a stunning multiplication of reflective surfaces," the office added.

Since the center is located close to the sea, according to the studio, "it is important to have protection from sea wind erosion by developing a robust waterproof and thermal insulation layer below the curtain wall as it covers the majority of the main volume, aside from an egress and a series of skylights." 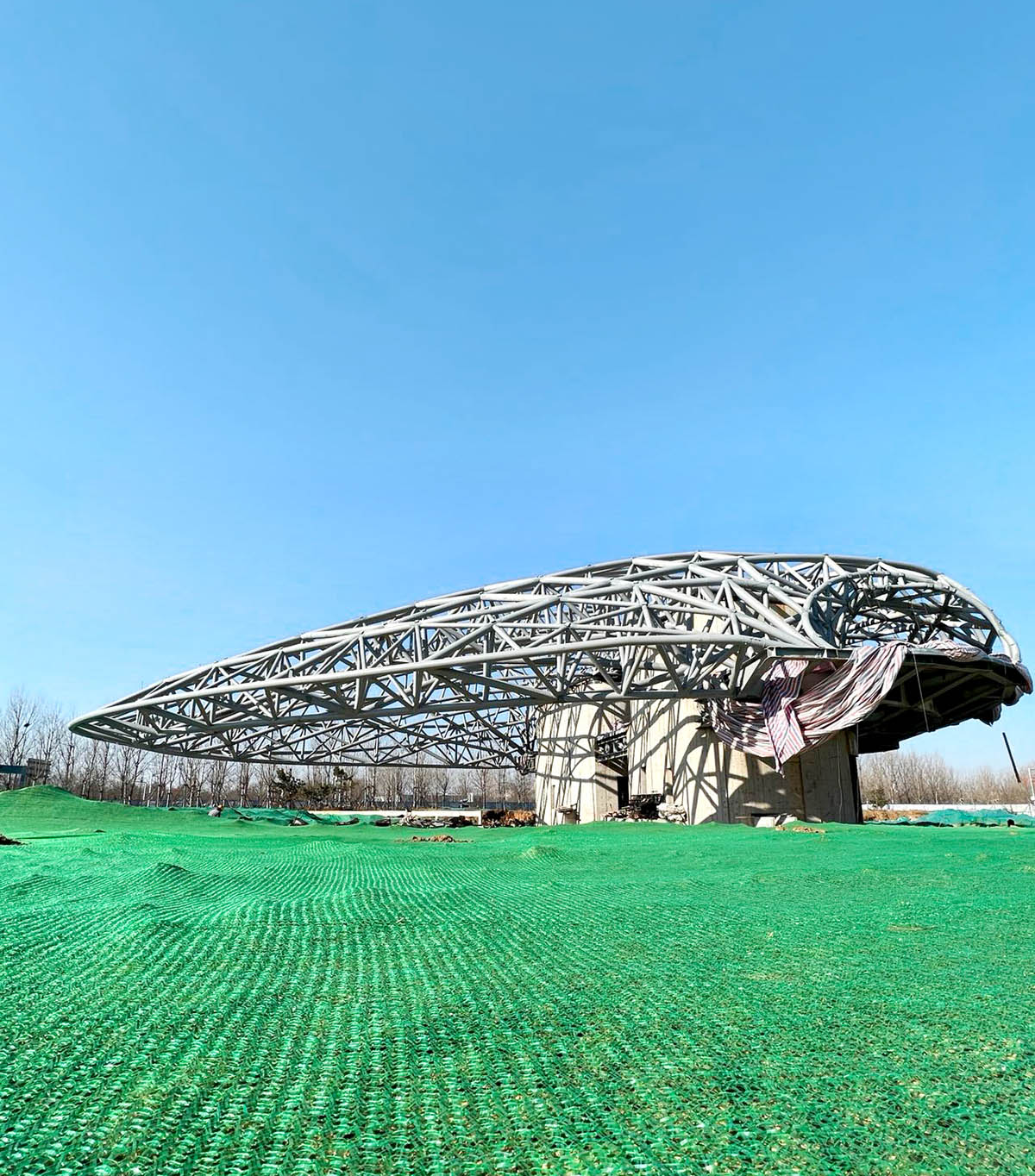 Further, the team designed a number of gaps between the façade panels to allow water collection and drainage, which is aimed to prevent water from stagnating on the building’s envelope.

MAD achieves the “floating” effect by using floor-to-ceiling glass on the ground floor beneath it, where the grand hall occupies the majority of the building’s footprint. 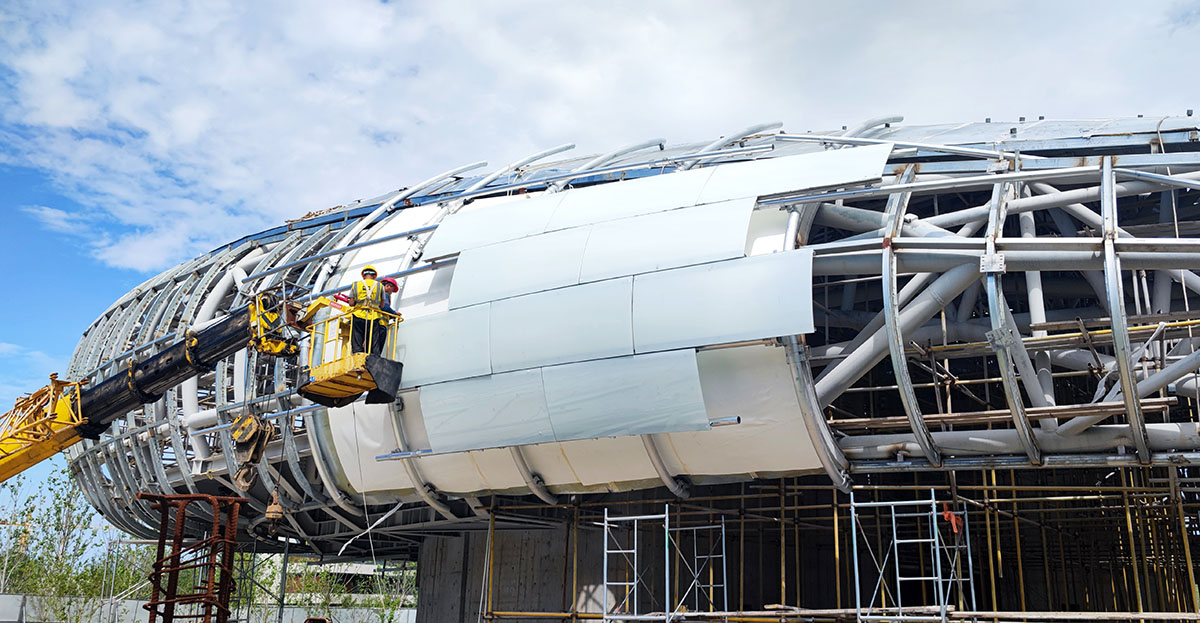 "Because of the same structural space frame that supports the gallery, the grand hall is also virtually column-free, thus allowing the space to be animated by the efforts of the community and the reflective pond toward the entrance," the office continued.

"Beyond the copious natural lighting achieved by the wraparound glass, a number of lights are embedded within the sculpturally swirling ceiling of the grand hall." 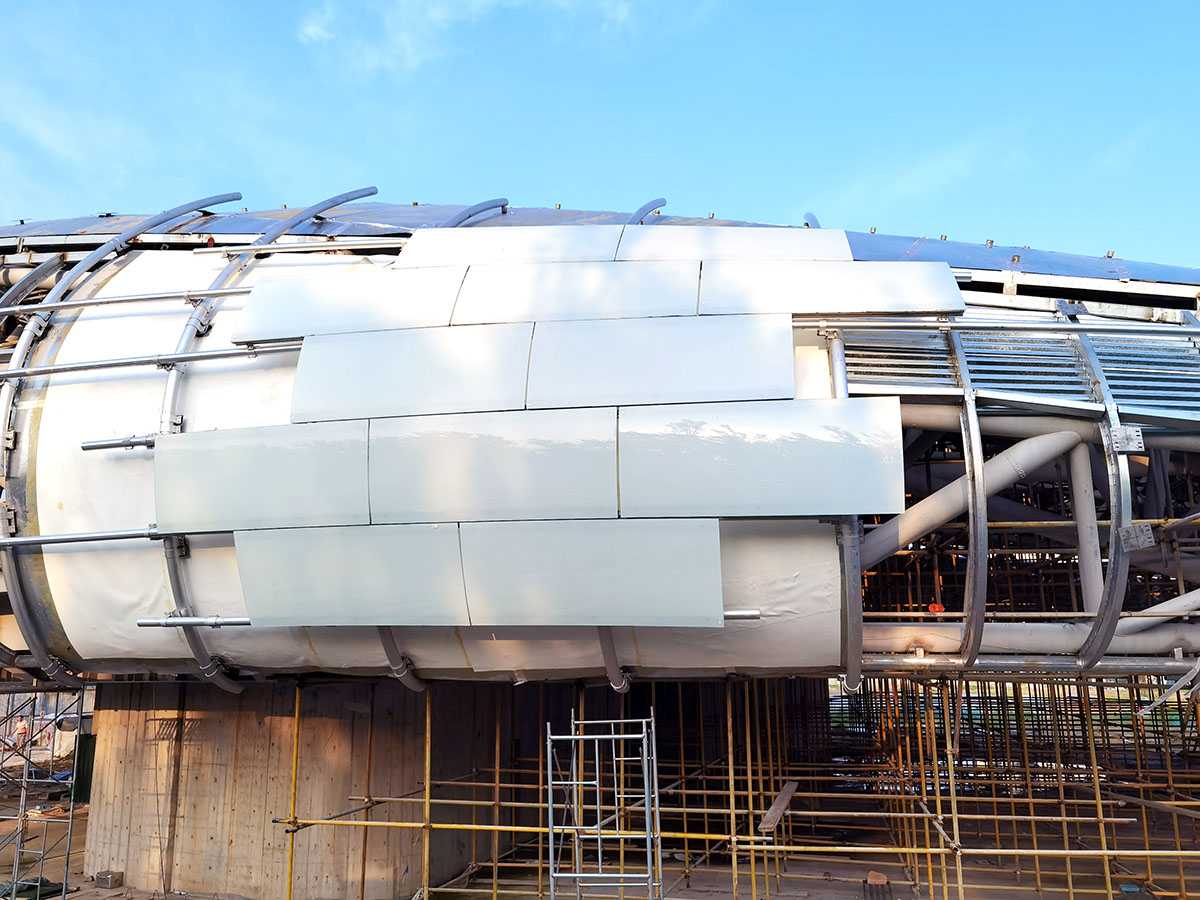 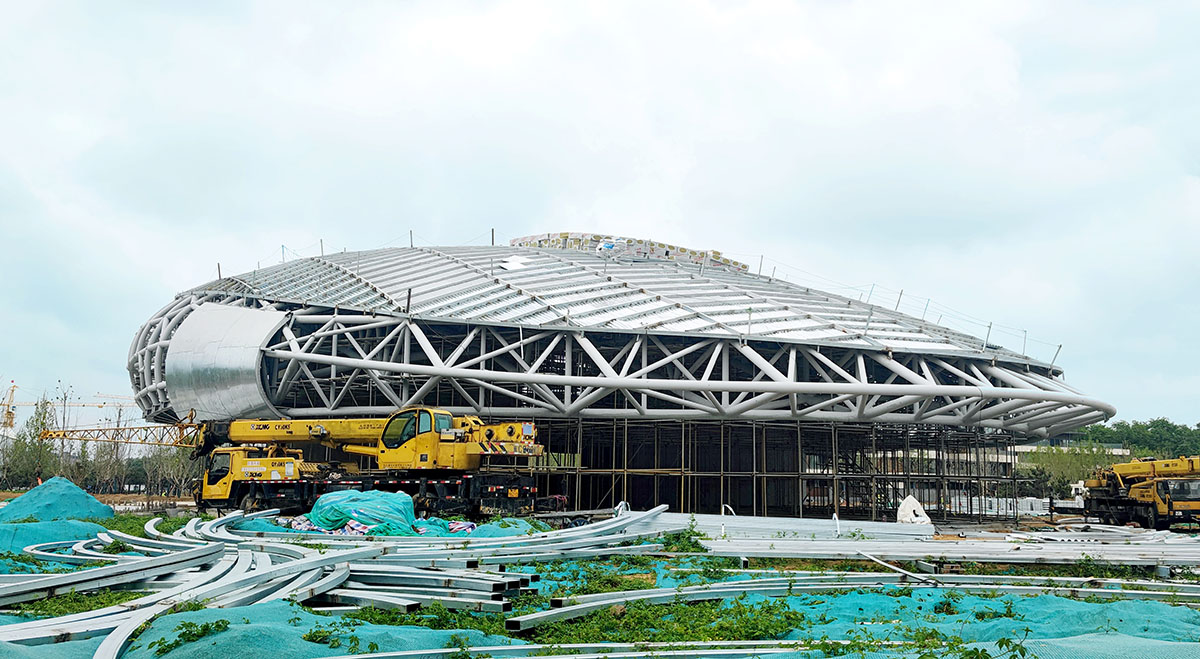 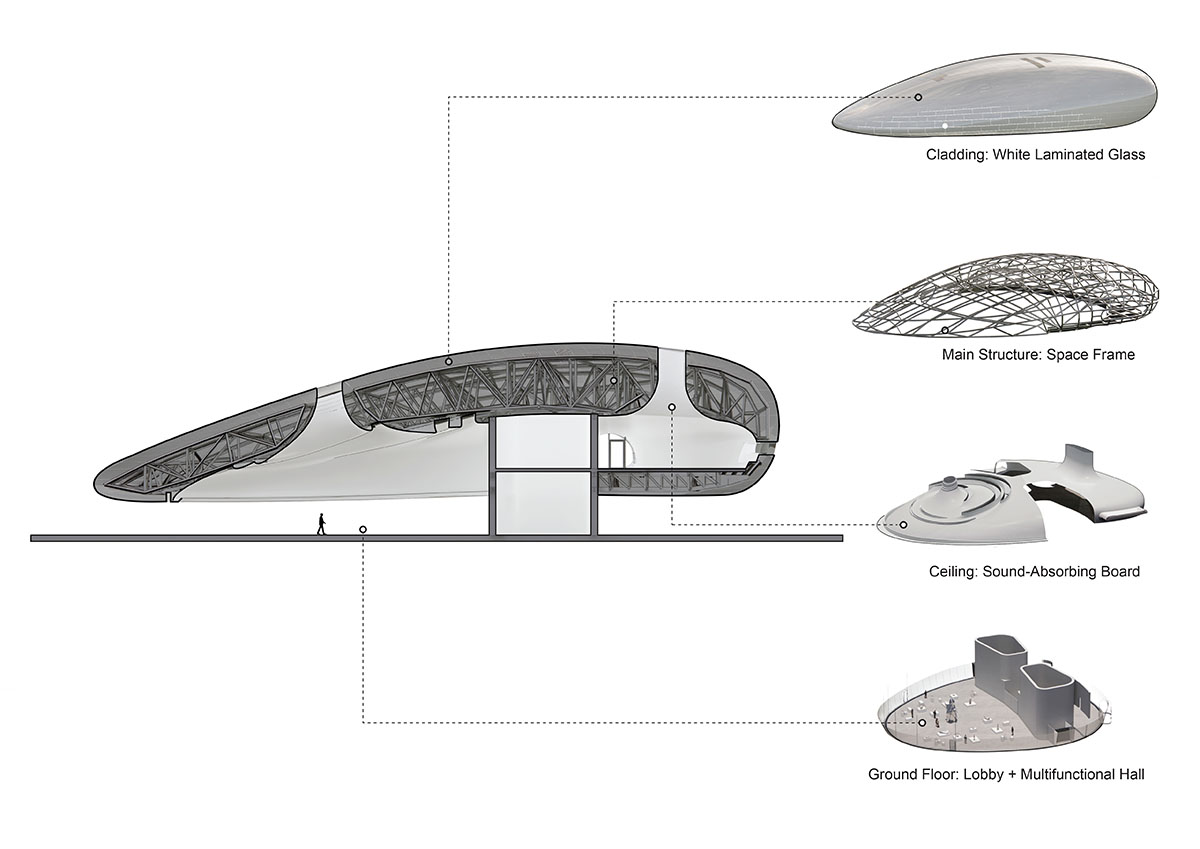 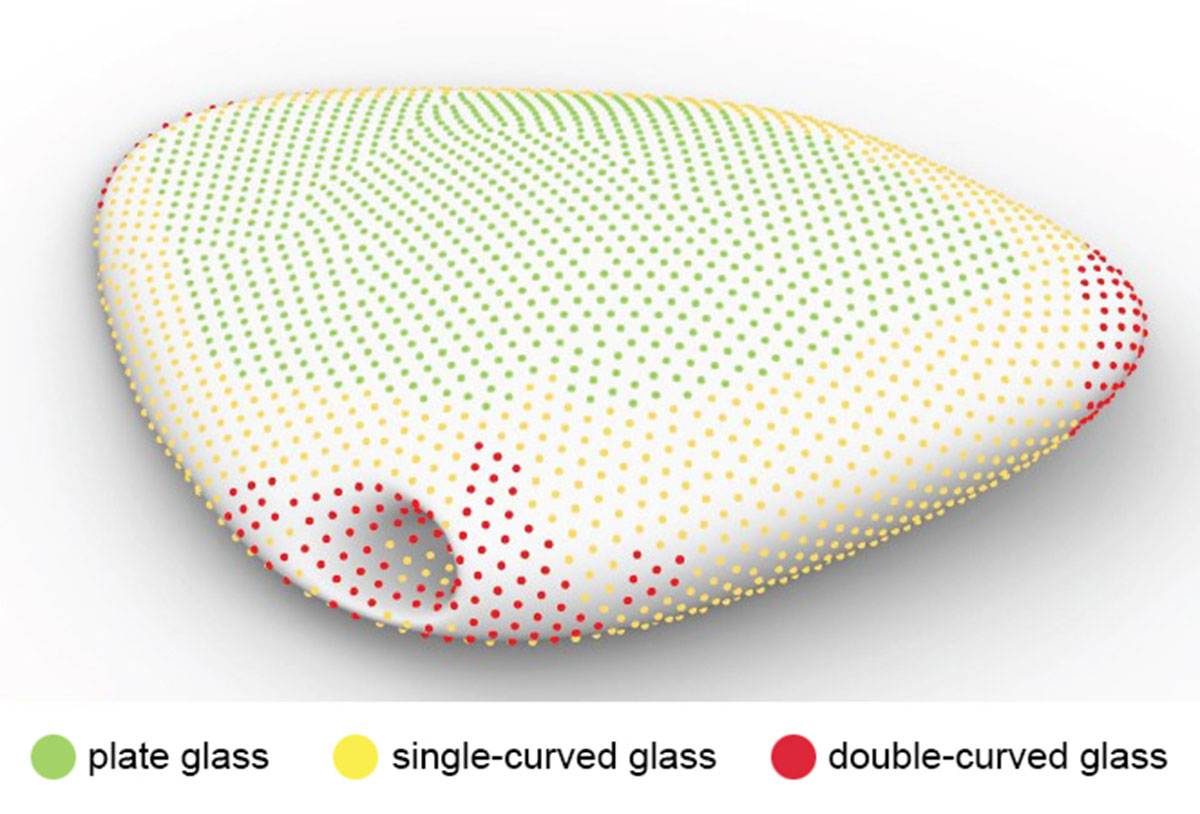 When these main spaces need to be subdivided into smaller spaces, such as intimate exhibitions, theatrical performances and conferences, the area can be configured in a wide variety of compositions through the number of non-load-bearing movable walls.

The Aranya Cloud Center is currently under construction and is expected to be completed in 2023.