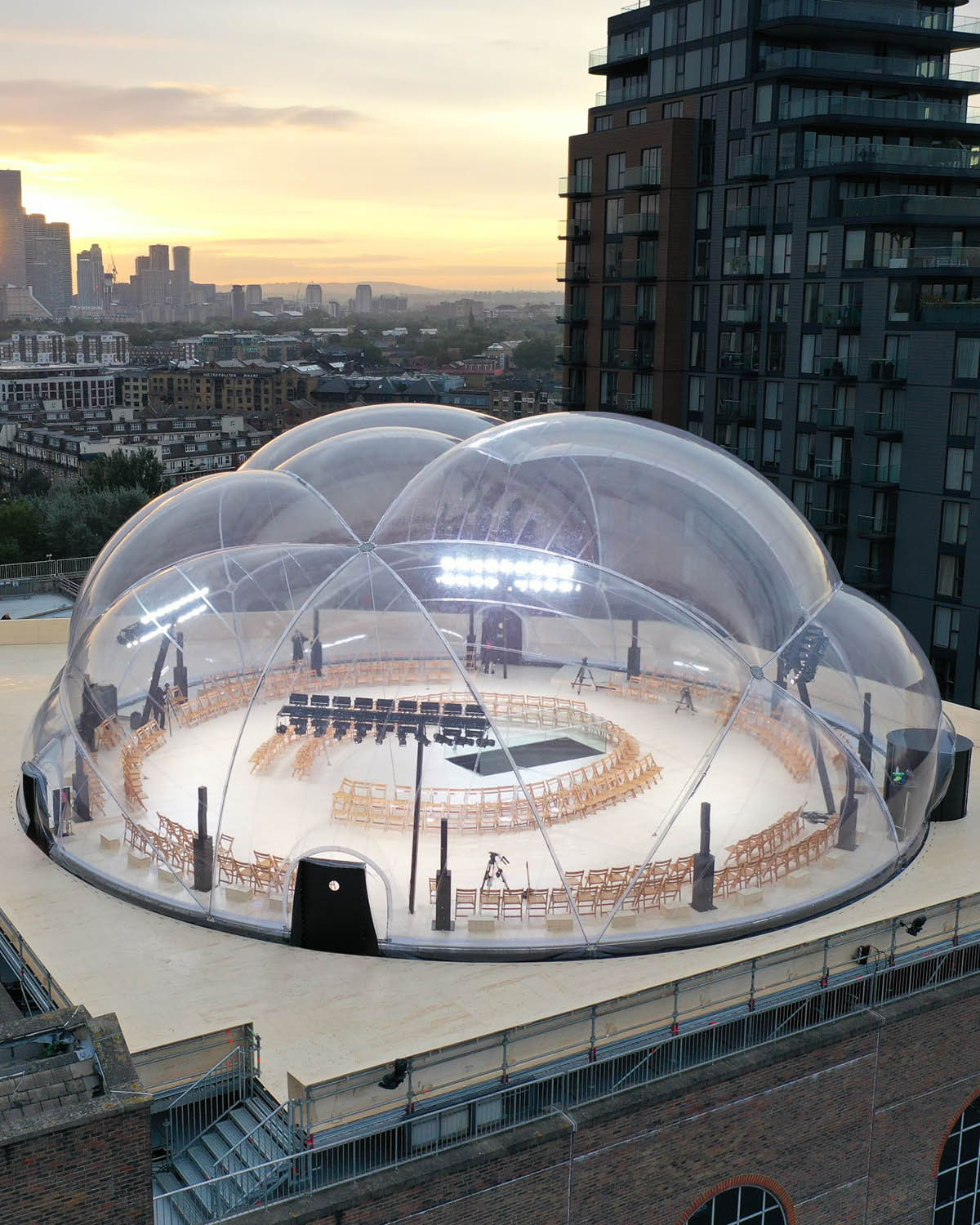 The show, titled London Skies, took place on Tuesday 12 October 2021 under a perfect bulbous dome installed on the roof of a multi-story car park building in Tobacco Dock, a former tobacco warehouse is currently used for large corporate and commercial events. 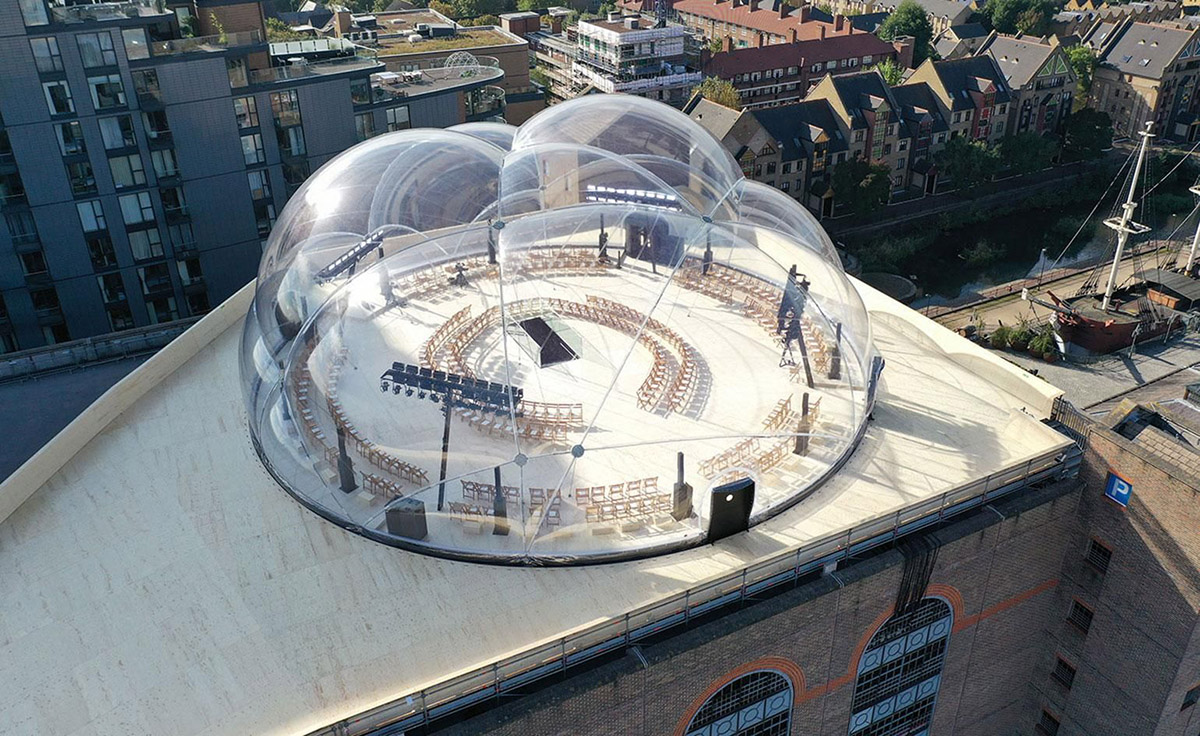 Radić has collaborated with British luxury fashion house Alexander McQueen to design the fashion show stage of the brand. Informed by the formation and colors of clouds, the architect designed the transparent bubble on a circular base.

The transparent membranes of the bubble are supported by the network of steel tensile cables. To create the structure, Radić worked with structural specialist ES Global and creative agency Gainsbury&Whiting to fabricate the structure.

The concept of the stage meets the mission of Alexander McQueen in which the studio intends to emphasize "everyday elements of London" at the show. 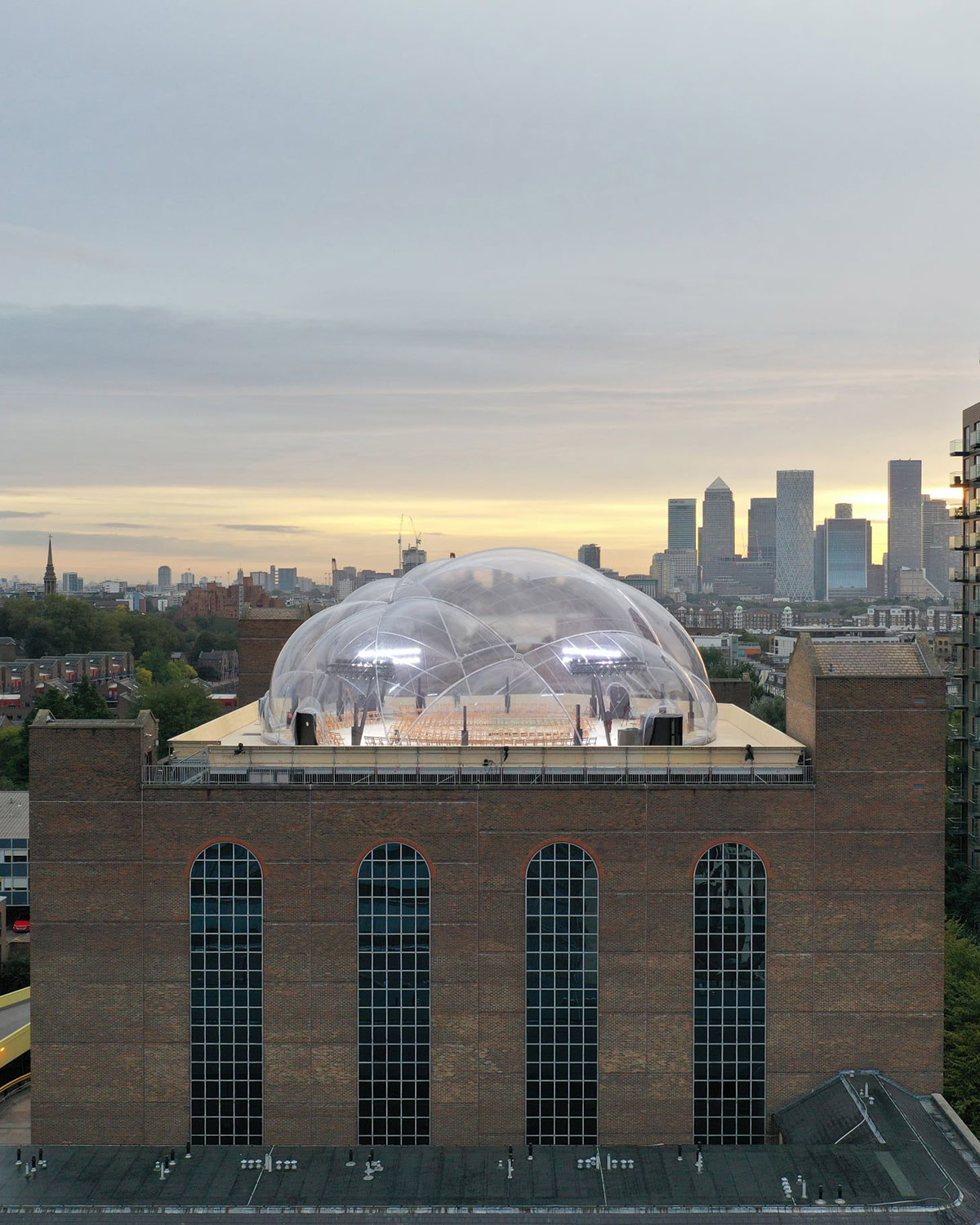 "The environment in which we live and work, in London, and in the elements as we experience them each day," said Sarah Burton, Creative Director of Alexander McQueen.

She added that "We moved from water – and the mud on the banks of the Thames – to the sky and the ever-changing, all-encompassing magnificence that represents."

"The artwork for the prints in this collection was shot from the rooftops of the studio where we are lucky enough to have the most incredible views of the city: from Saint Paul’s Cathedral to the London Eye."

Inspired by the weather itself, Burton "captured the formation and colouration of clouds from daybreak to nightfall and documented changing patterns, from clear blue skies to more turbulent ones." 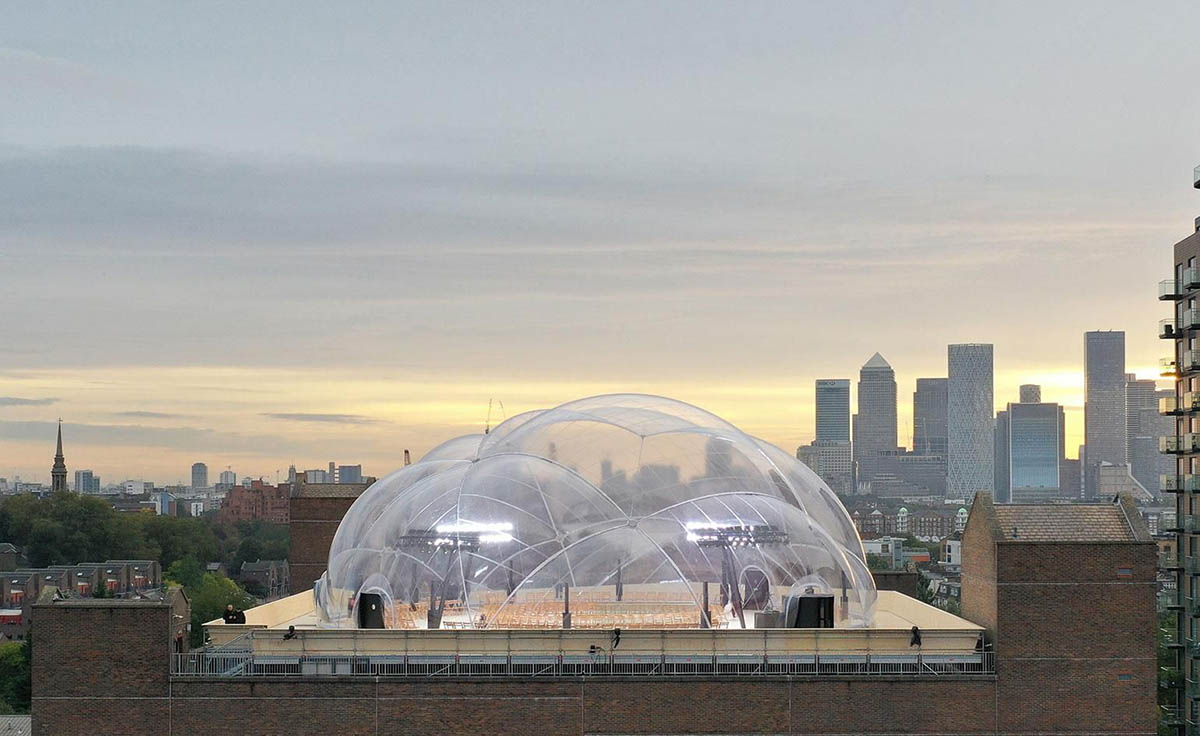 "That led me to storm chasing. I love the idea of the McQueen woman being a storm chaser, of the qualities of storm chasing uniting the passionately individual community of characters wearing the clothes," she added. 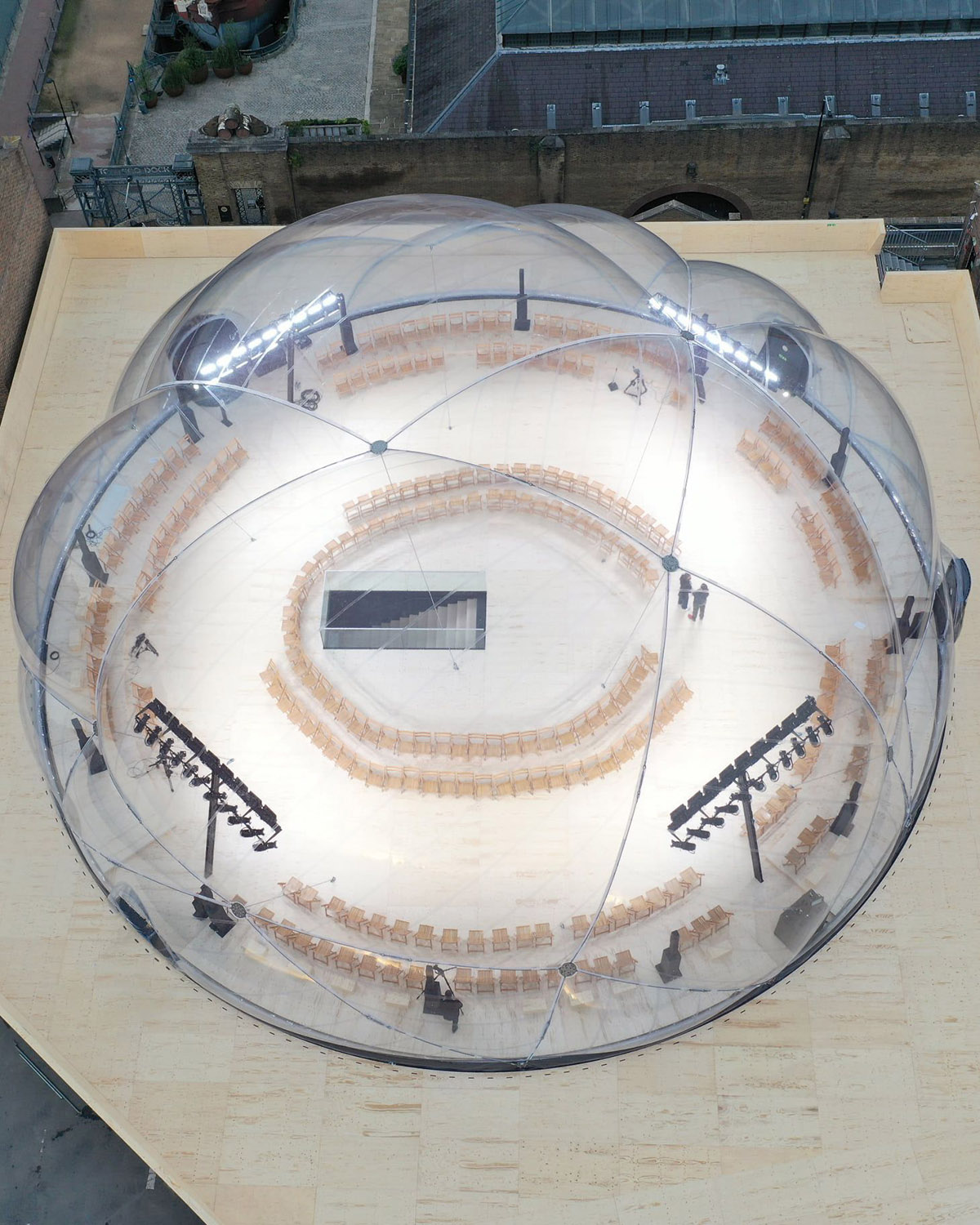 Inside, the brand placed a set of two rows of concentric wooden chairs in which the large circular area allows the show itself. At the center of show, a central staircase is hidden a plywood platform and becomes a surprising hole where models enter the stage. 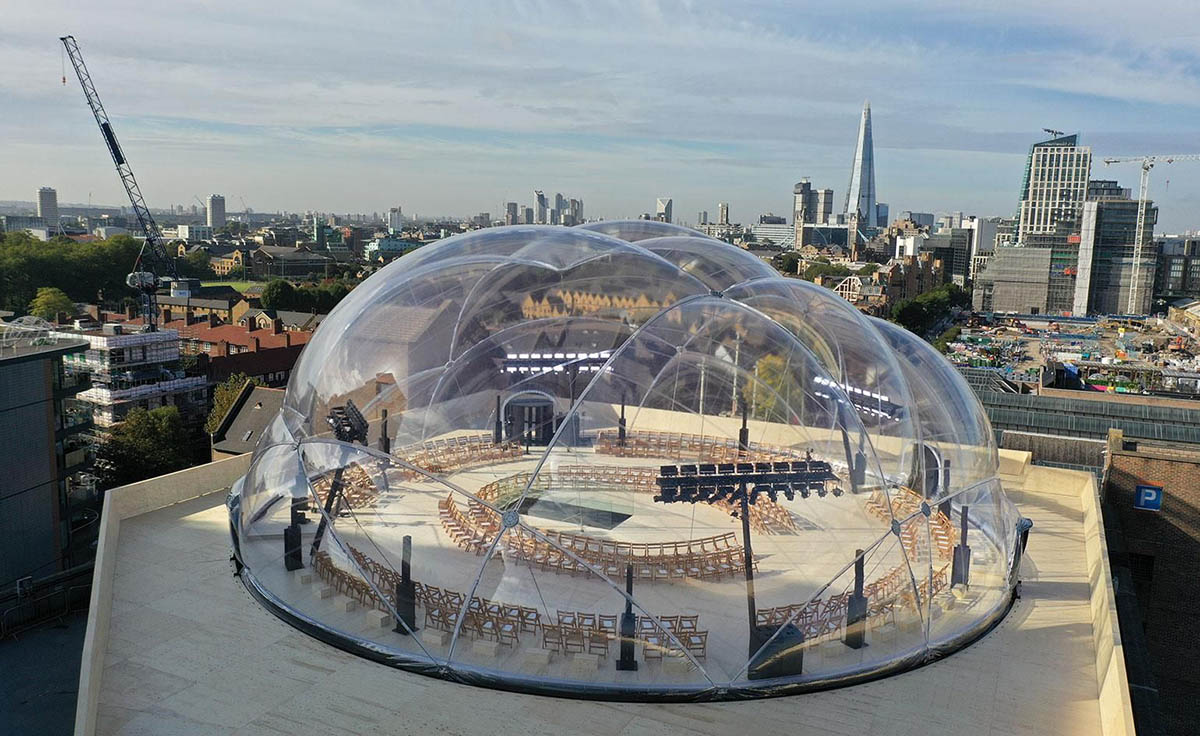 To keep the inflatable appearance of the bubble, the team placed multiple vents in the floor. The air-looked and revolving doors control the escaping air.

Due to its light structure, the stage can easily be moved and transported to nay other place.

All images courtesy of Alexander McQueen.