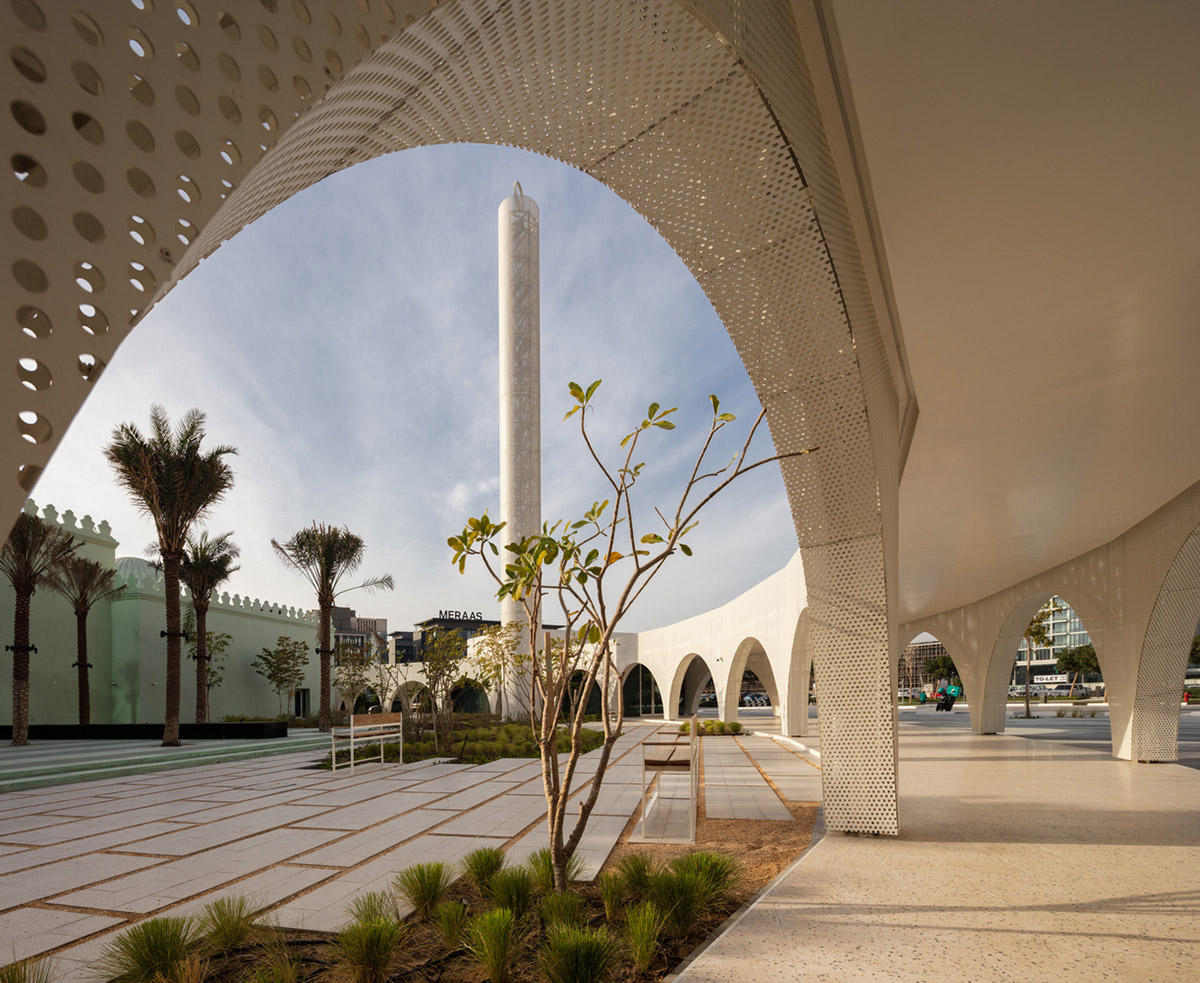 Dubai and Tokyo-based multidisciplinary firm waiwai has wrapped the periphery of a mosque with perforated colonnaded arcade in Dubai, United Aarab Emirates.

Named Mosque of Reflection, a circular-formed arcaded walkway acts as a transition space before entering the mosque, creating a buffer design element between the main prayer hall and the city.

The project, covering a total of 2,800-square-metre area, reimagines the role and presence of the mosque in the city. The architects take cues from the traditional Arabian mosque typology where a mosque is conceived as a communal space. "The mosque reframes the spaces to encourage community use alongside its purpose as a sacred space of worship", according to the architects.

The project is situated within Dubai’s dense city landscape adjacent to the Coca-Cola Arena, with the new design, the mosque creates a sharp contrast to its surroundings, standing as the physical embodiment of spirituality, tranquility, and community. The architects maintained the shell of the existing mosque with its original façade, while the façade was painted in reflective glossy pastel green. Besides, the team preserved the spatial arrangement of the prayer spaces.

The main component of design is a colonnaded arcade or riwaq, a significant architectural design element of Islamic architecture. From the street level, passersby first perceive the colonnaded structure.

Unlike the traditional mosque typology, the riwaq, gently wraps around the mosque in a circular form. 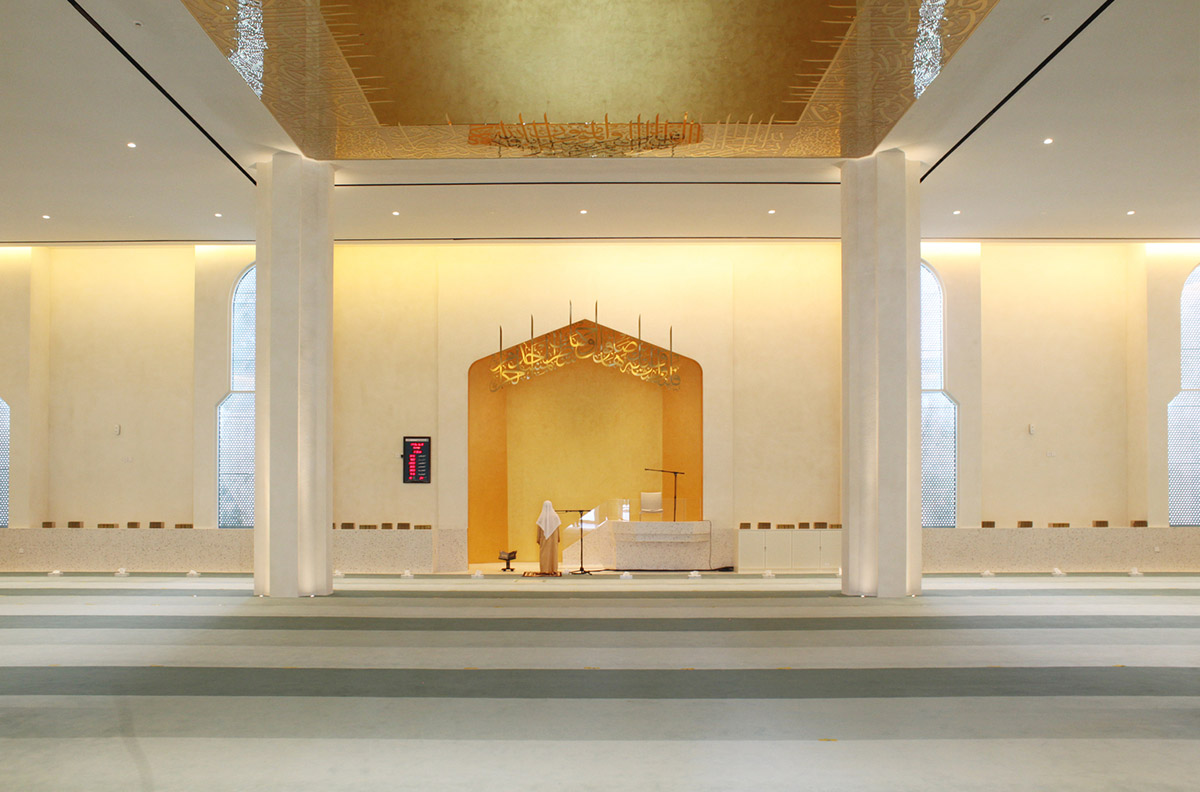 The architects create a series of wide arches for the riwaq to invite people and worshipers from all directions. The material of the riwaq is a white perforated metal featuring small circular voids. These voids also allow natural light to enter the depths of the space.

"The use of white extends to the tile flooring of the riwaq further emphasizing the sense of openness and lightness," said waiwai in a project description.

"The combination of the perforated metal and form removes the boundary of separation between the mosque and city and creates transparency between exterior and interior spaces," the studio added. 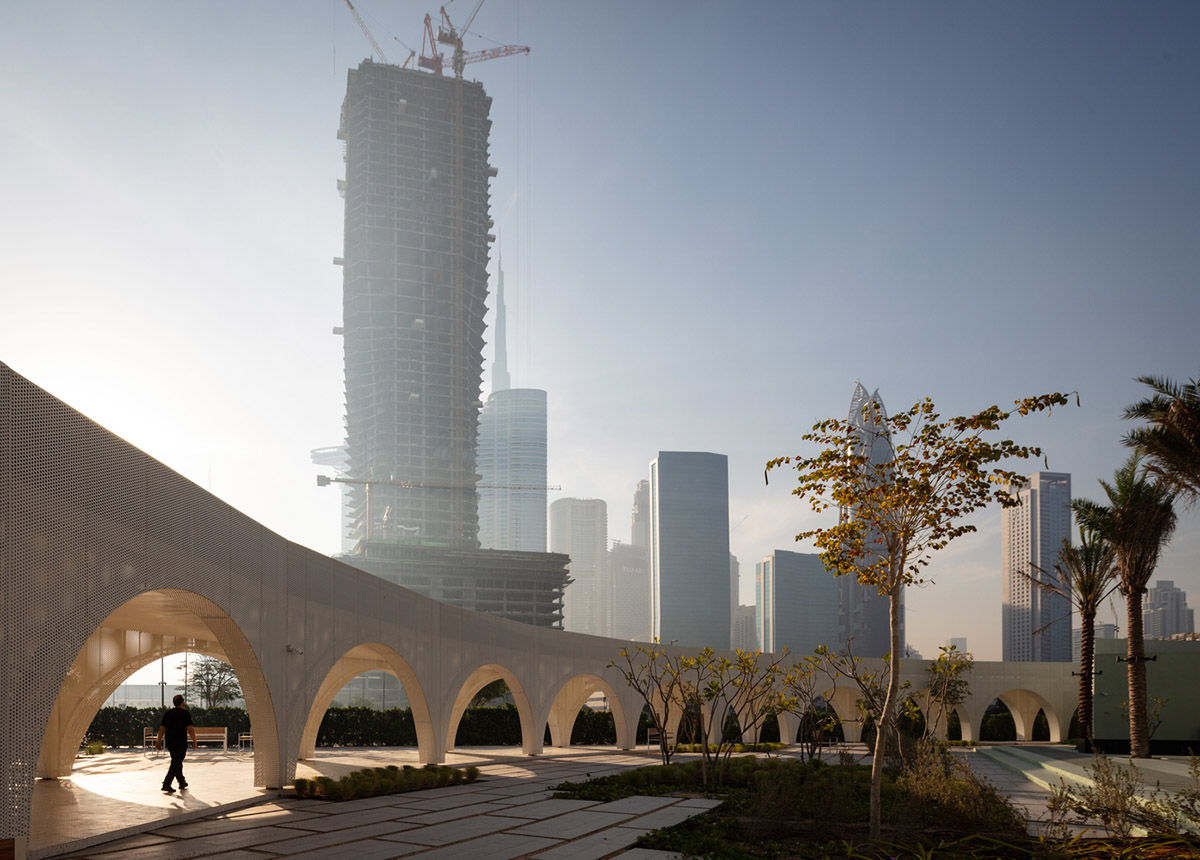 Within the sahn or courtyard, the studio creates a new public space. Worshipers are guided by palm trees, rectilinear water features, leading to the main entrance. Seating elements nurture an environment of tranquility.

"The sahn is a spatial metaphor to where community, faith and the city connect and intertwine," the studio added.

"The riwak and sahn serve not only as circulation but also where visitors can pray, read, reflect, and gather." 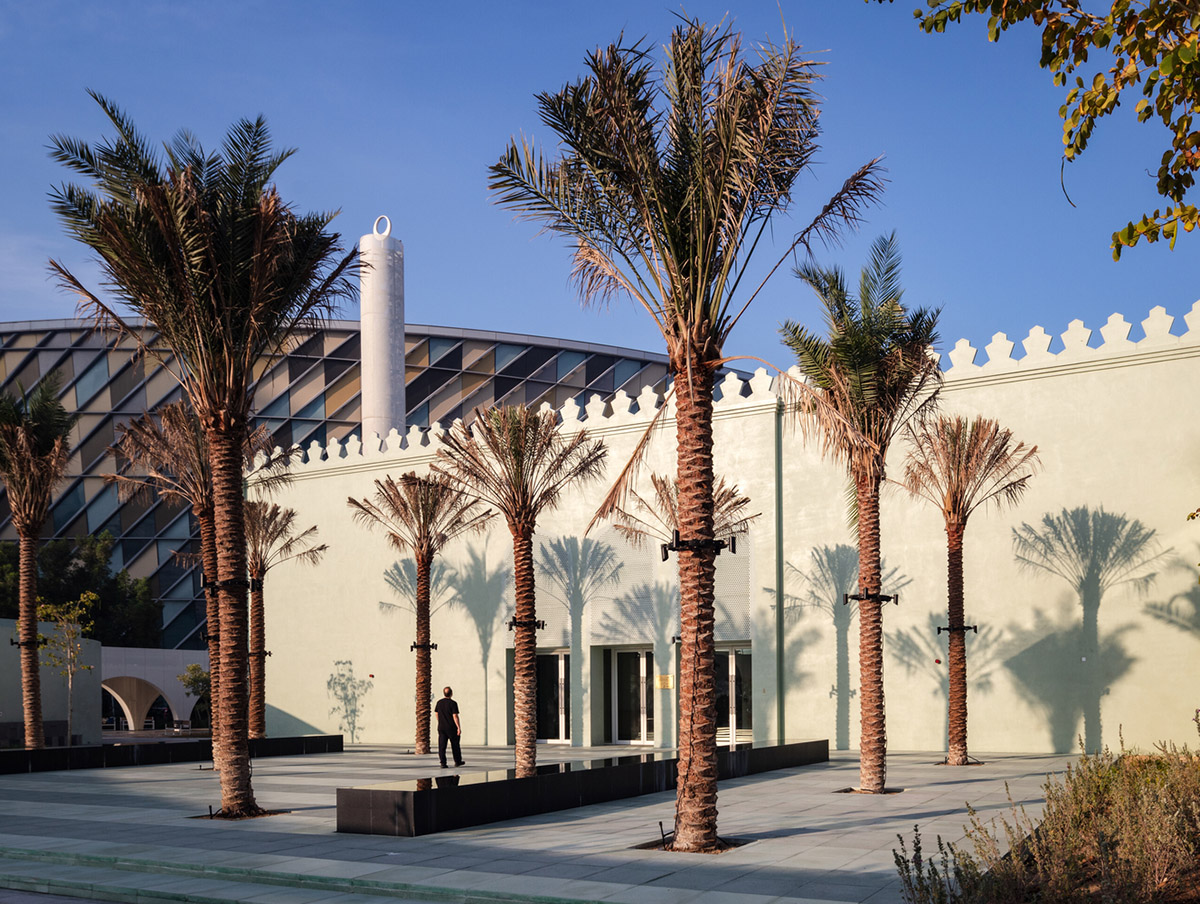 On either side of the mosque, two minarets rise as slender structures that mark the function of the building. The two minarets are also clad in white perforated metal that form the enclosures for wind turbines which will provide sustainable energy.

At the entrance before the main prayer hall or haram, worshipers encounter with a transitory space between external and internal.

The architects use the same color and material palette in the interiors to complement the mosque’s exterior identity. The haram is simplistic and minimal. 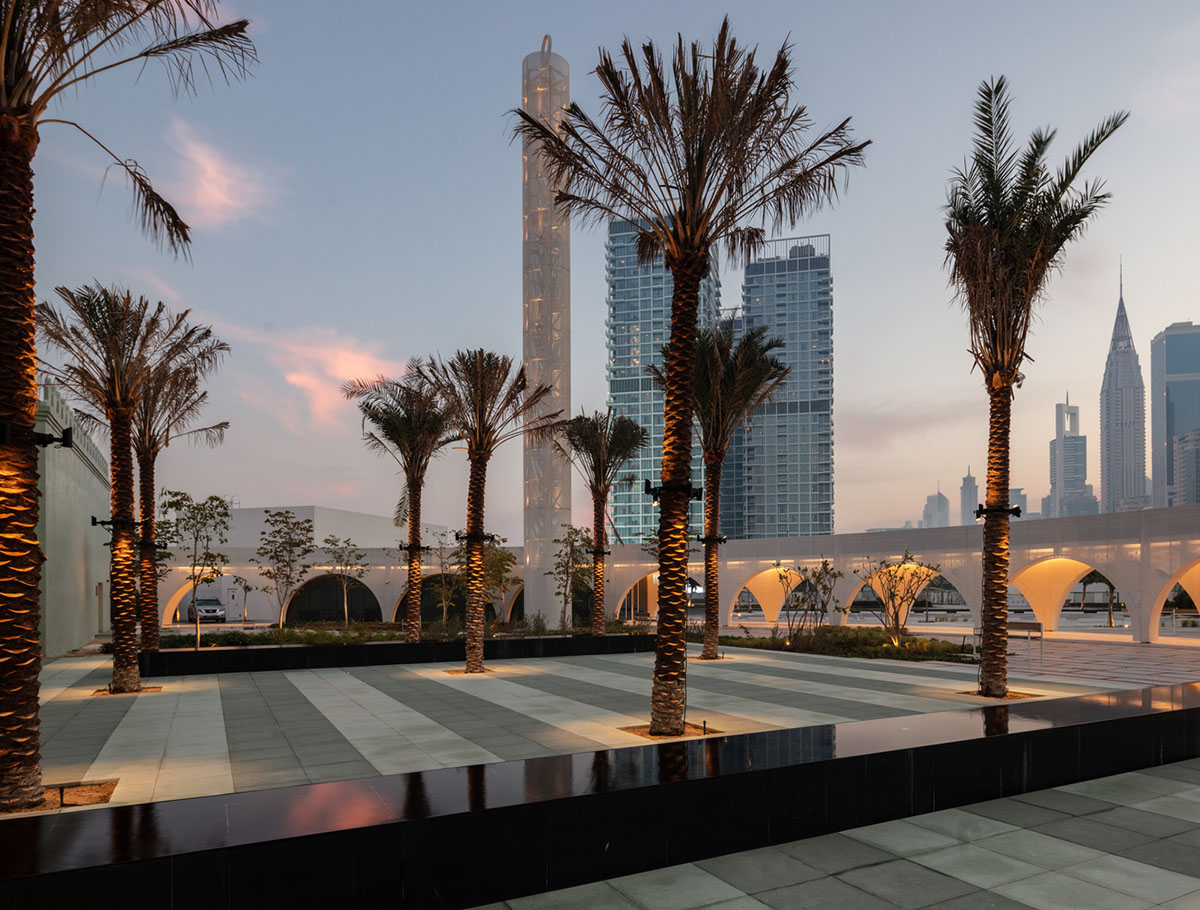 "The carpet flooring consists of bands of alternating shades of green which identify the rows for prayer. Gold tones decorate the ceiling above the center of the prayer space," the studio added.

"The mihrab indicates the direction of Mecca of prayer and is where the imam prays. Calligraphy with ayahs from the Quran span above the mihrab along the center of the ceiling." As the studio explained, "the Mosque of Reflection offers an environment where the religion and wider community can coexist as well as an experience not only for worshippers but the city as well." 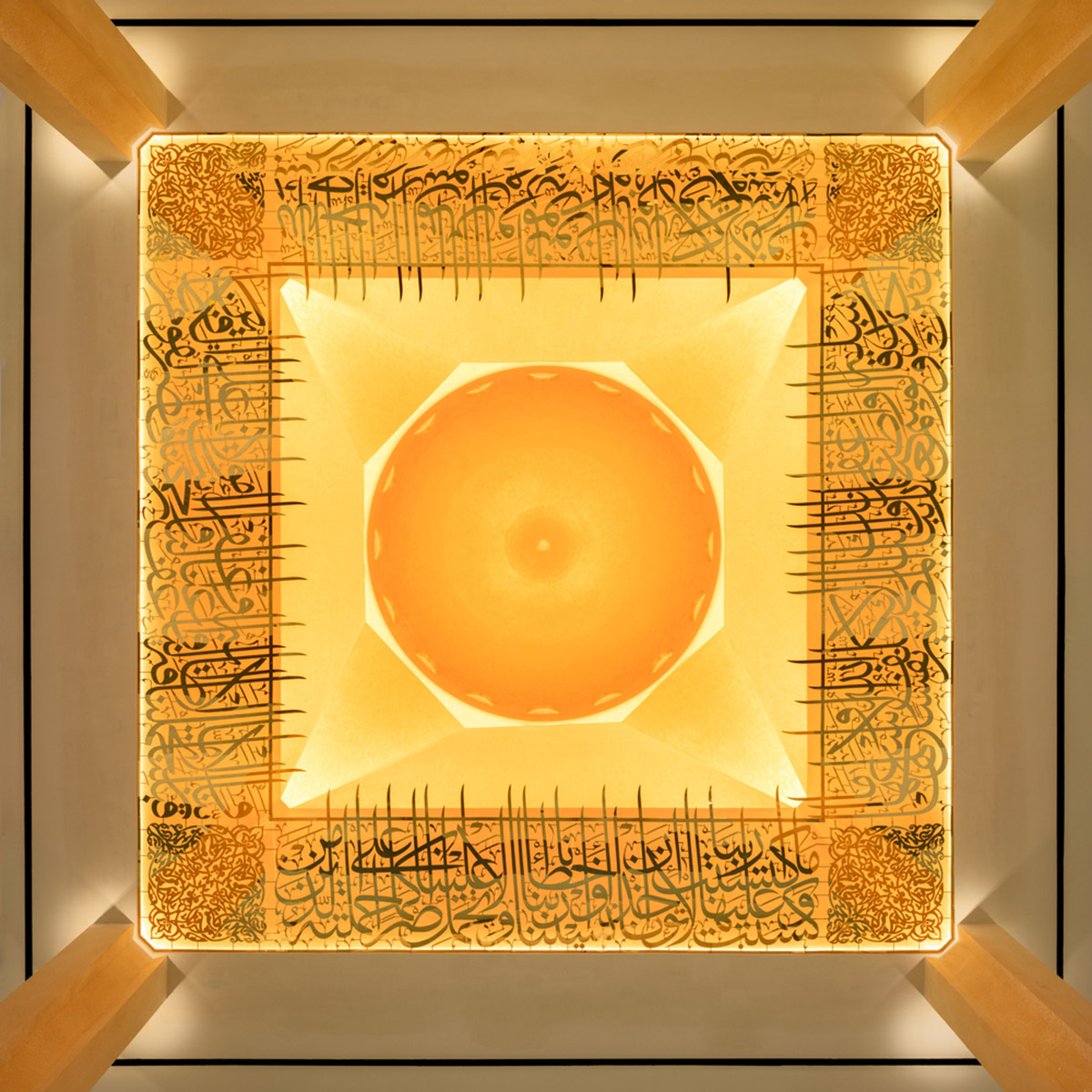 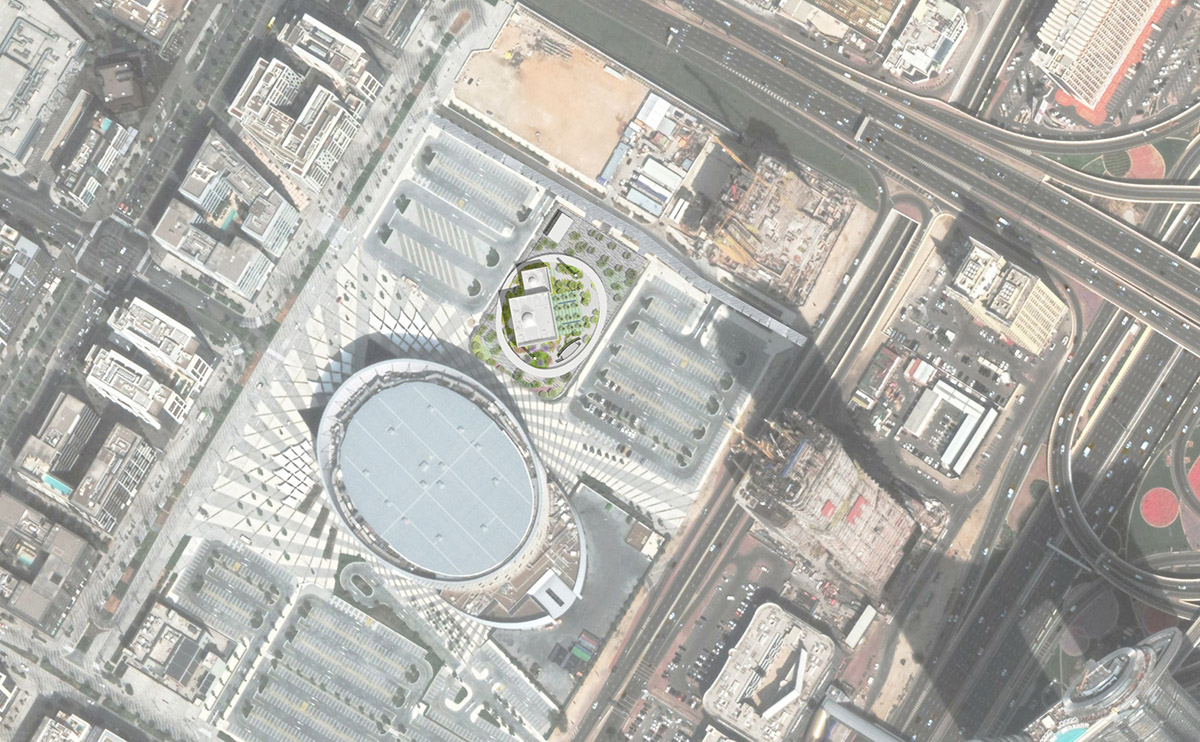 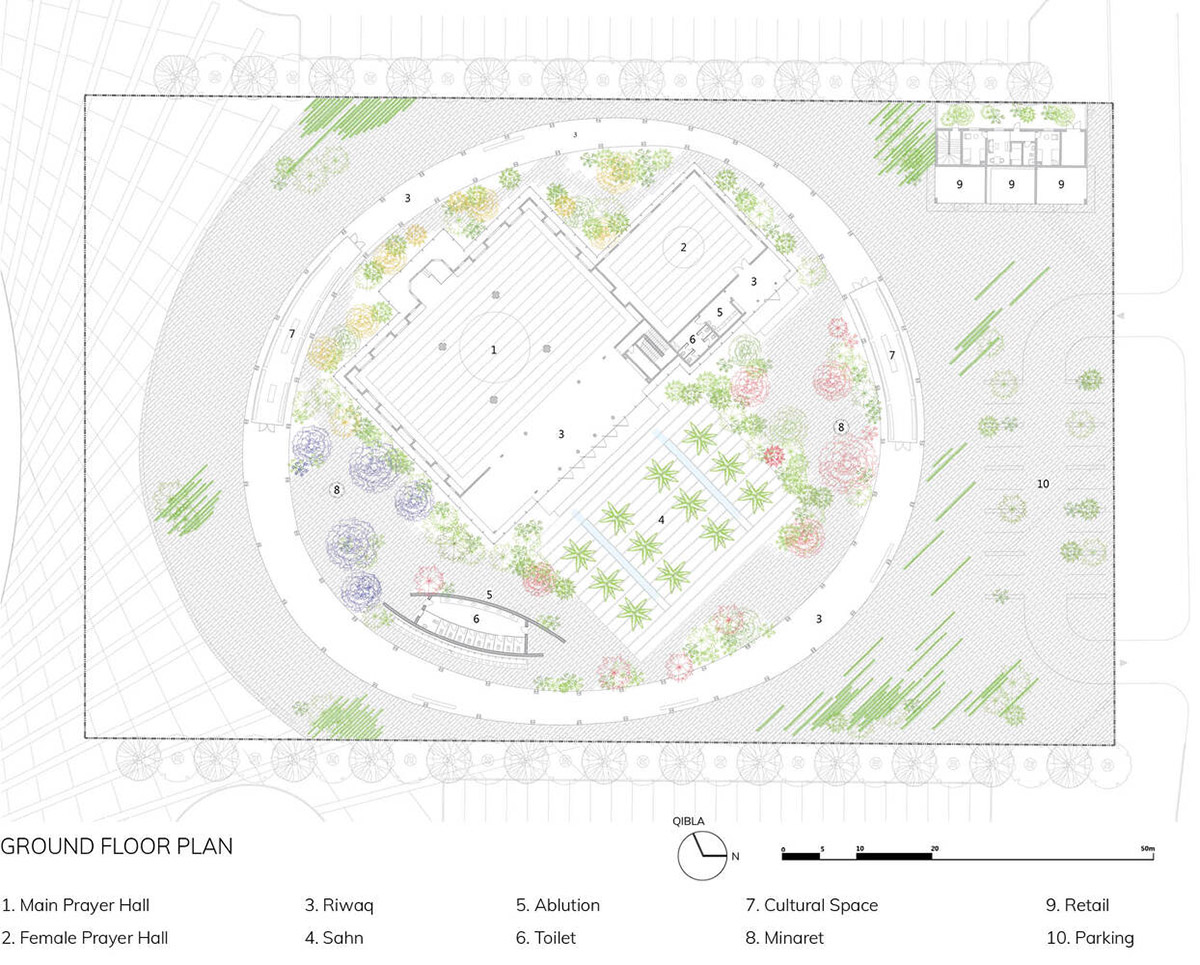 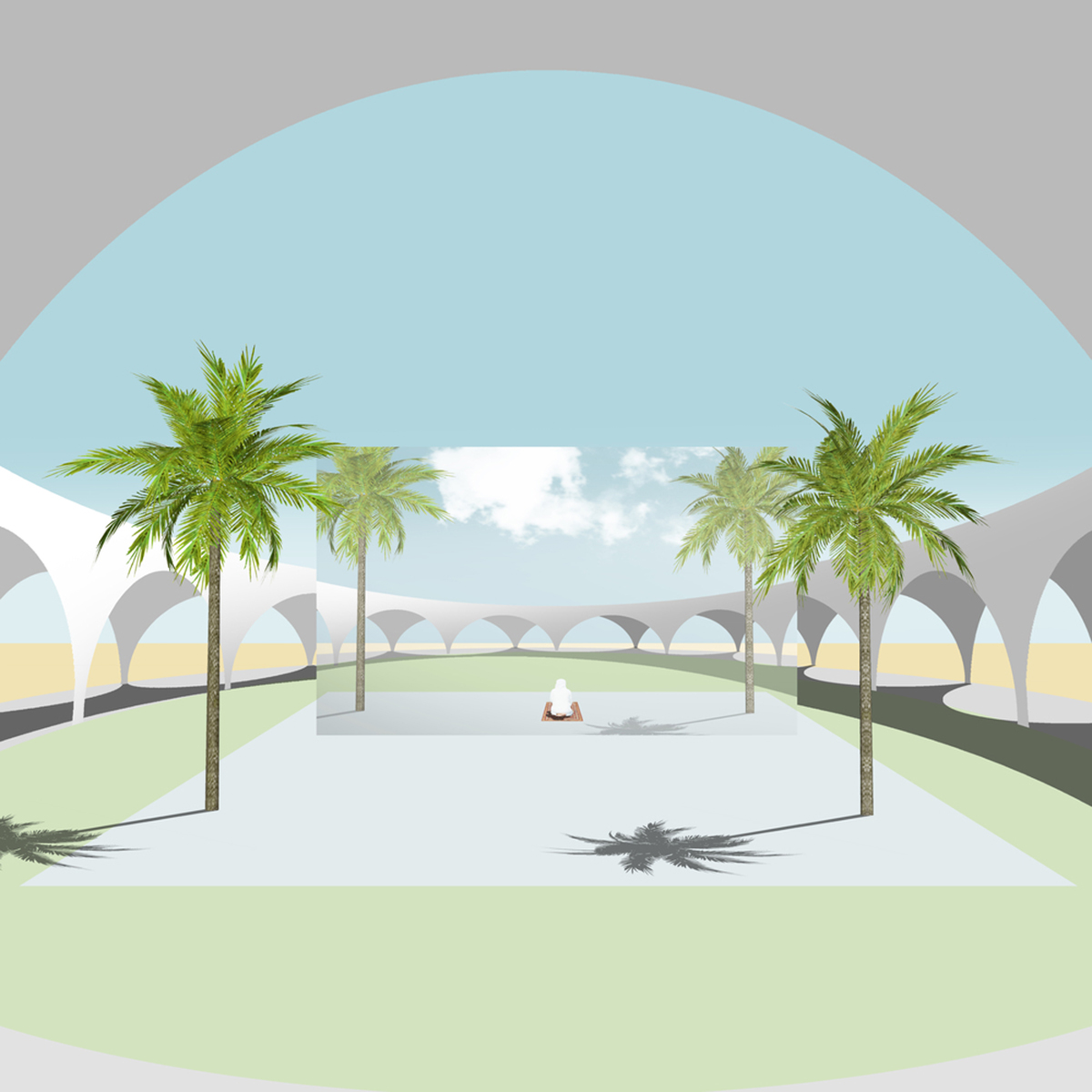