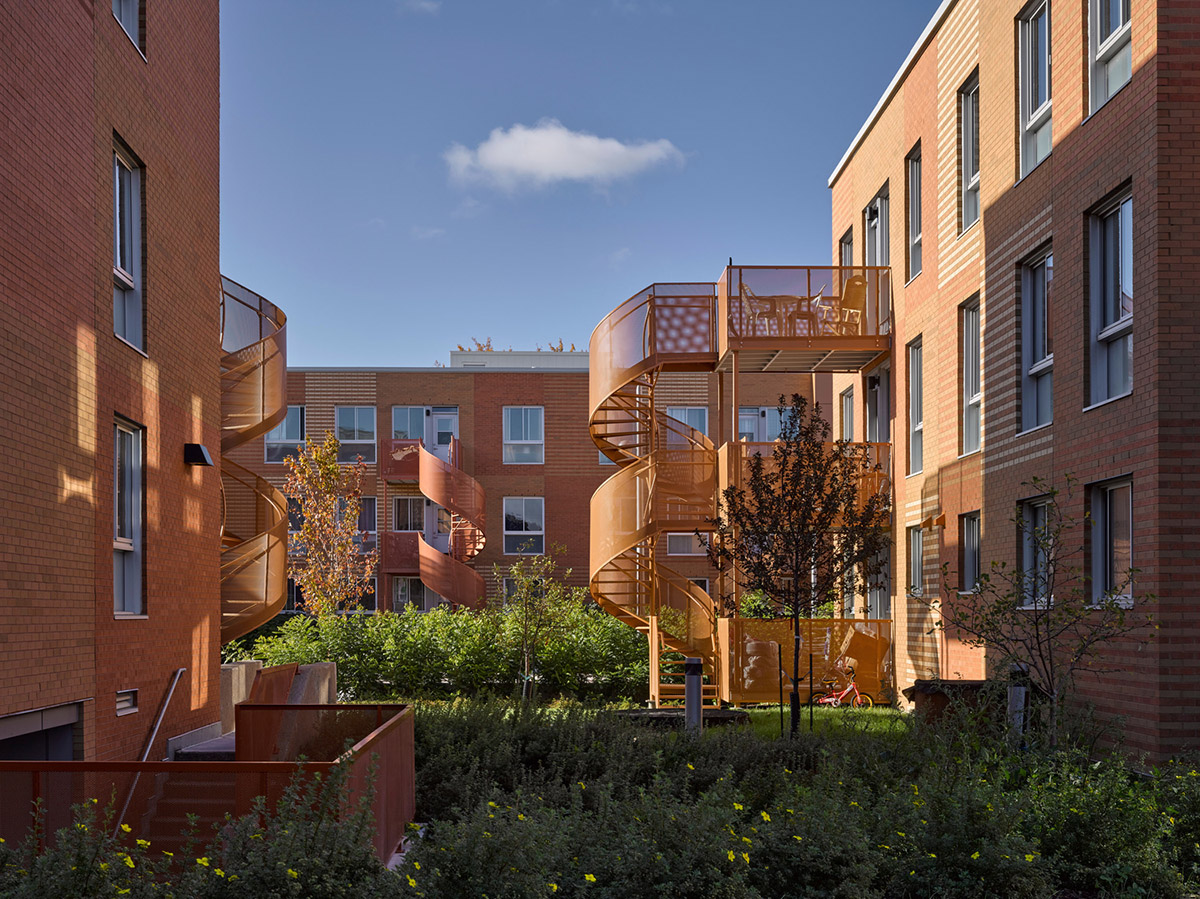 Canadian architecture practice Saia Barbarese Topouzanov Architectes has renovated an old housing complex with spiral staircases and with an internal street to reactivate the existing area.

The complex was designed by Montreal architect Philip Bobrow in the early 1970s, when brutalism was in vogue, the development now gains a new identity and becomes a joyful part of the landscape, a dignified and respectful environment for all residents. 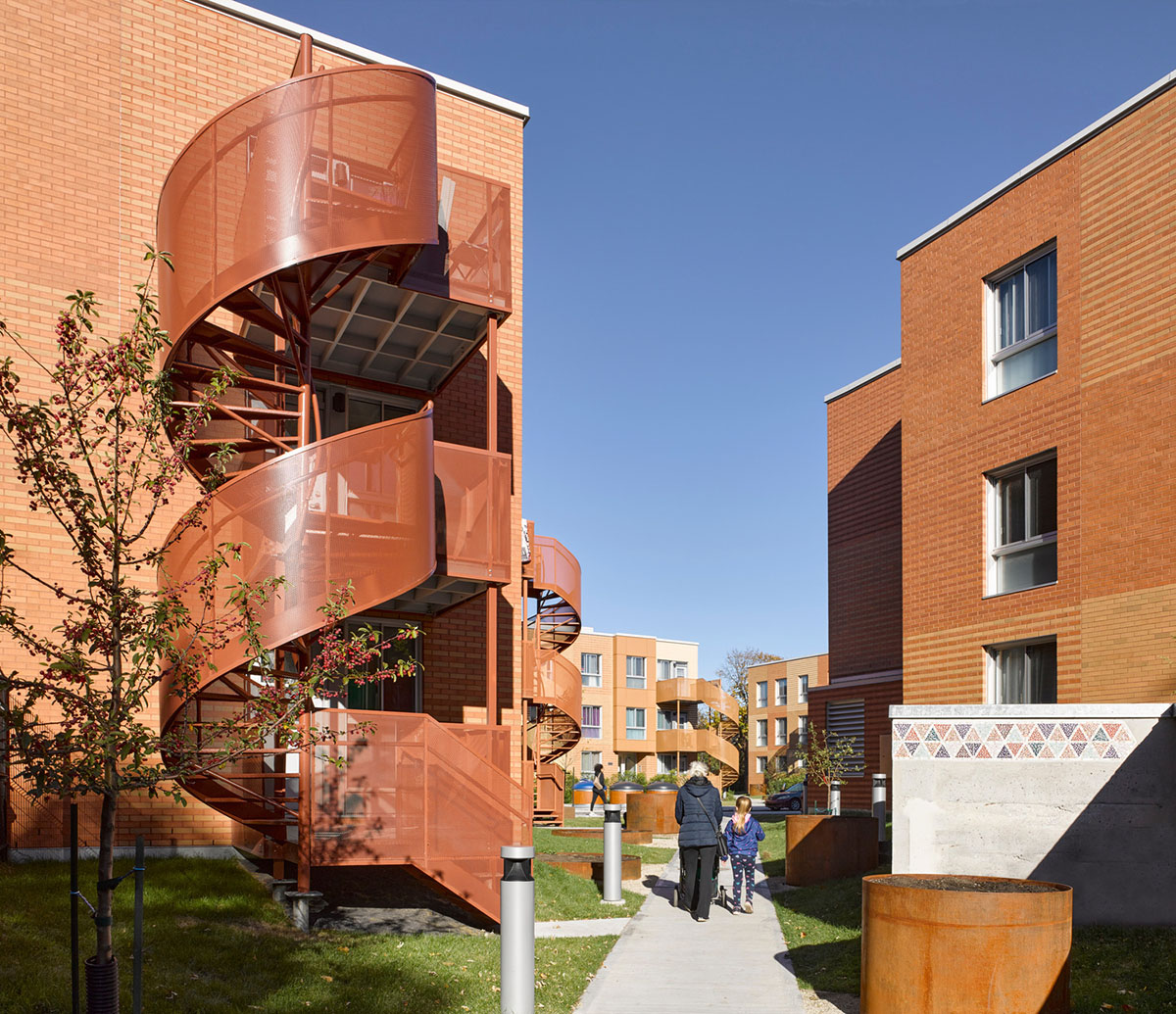 After a study of the housing complex, whose components had reached the end of their useful life, the proposal that was finally adopted entailed a remodelling of the entire complex, including the creation of a street in the centre of the block and the addition of a third floor to the existing two-story buildings.

According to the architects, the project brief included the re-use of the buildings’ wood framework and a requirement to maintain the same number of units as before. 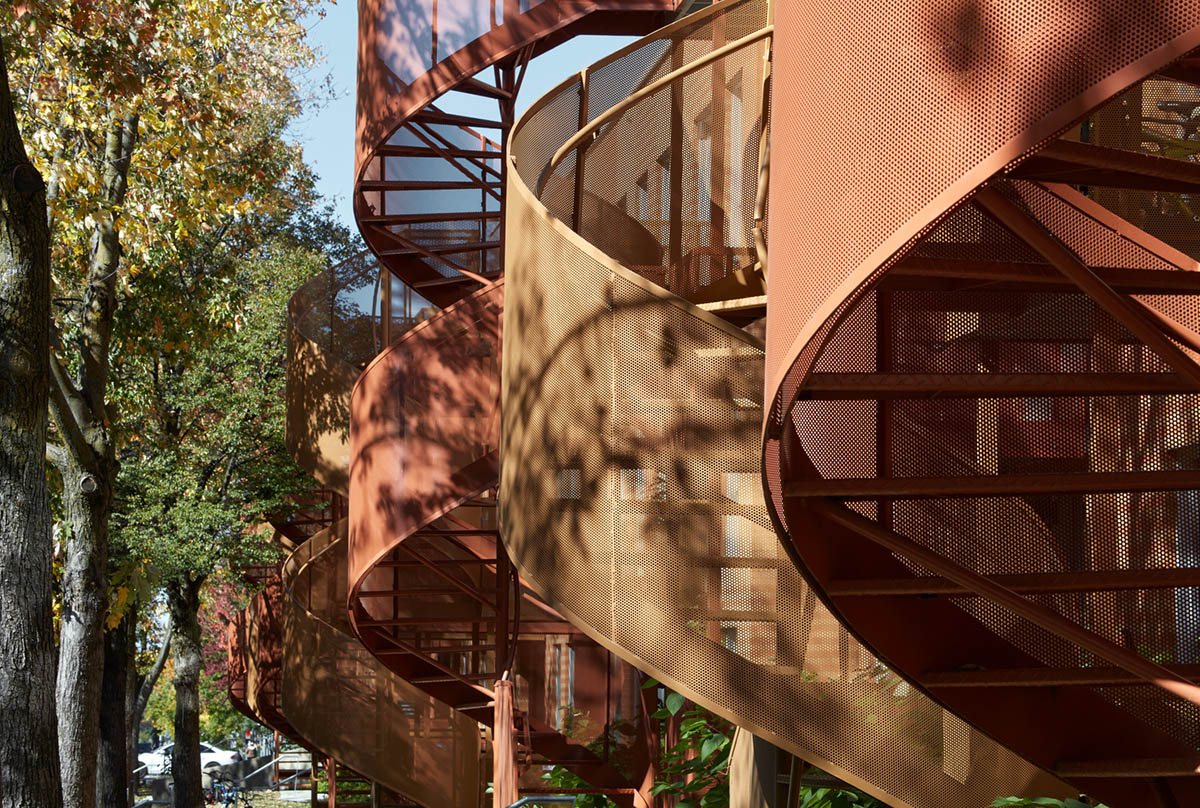 In keeping with the stated objectives, the architects’ first task was to develop a strategy that would open up the block, keep the same number of units, remediate building-envelope and safety issues and, lastly, create a more community-oriented living environment.

The addition of a shared central street in the heart of the site, inspired by the woonerf concept, originating in the Netherlands, necessitated the demolition of six of the complex’s original small buildings. The demolition became an opportunity to imbue the development with a sense of place by adding small public squares – piazzettas – along the shared street. The designers were able to maintain the same number of units as before by adding a third floor to eight of the complex’s two-story buildings. 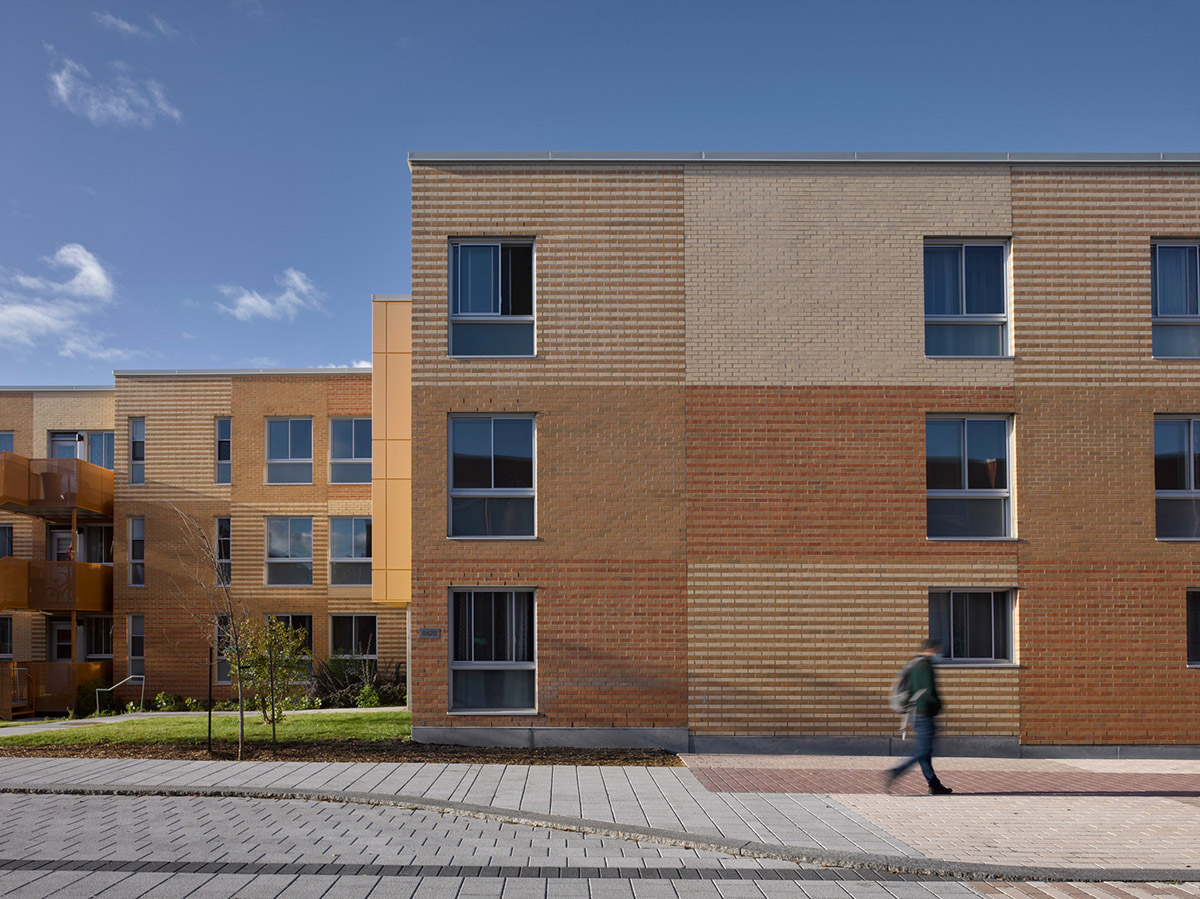 Another design goal for the project was optimal energy efficiency, both for building envelopes and mechanical systems. The shared street includes pedestrian and vehicle zones with permeable pavement, while the landscaping plan features rainwater retention and bio-retention basins.

Lastly, the site is equipped with an innovative waste and recycling management system using large, partly in-ground containers. Numerous trees on the site were protected. 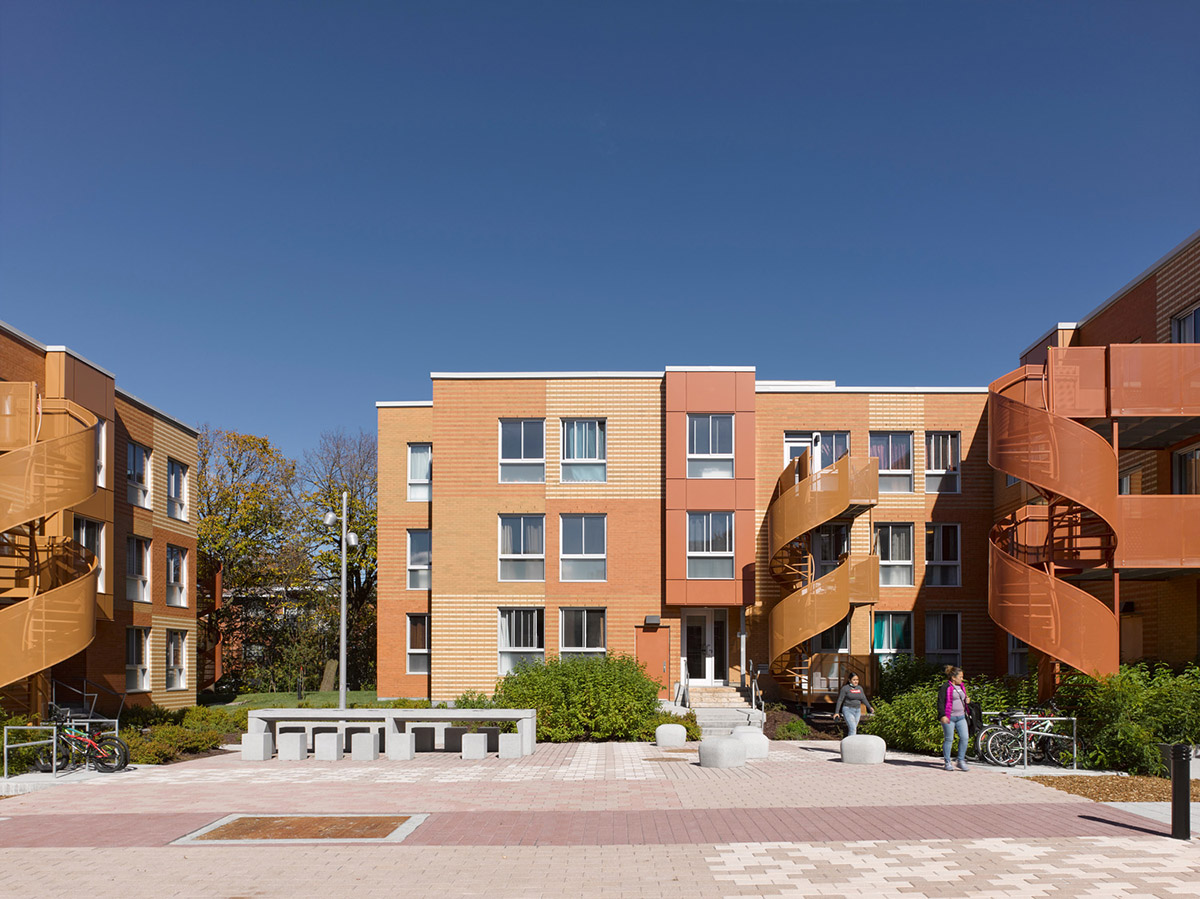 The shared street is very important to the project because it allows for open pedestrian paths with no dead ends, improving residents’ sense of security.

Three community spaces were redesigned from the ground up and relocated to larger, better-lit spaces. The redesigned Habitations Saint-Michel Nord complex now has a more accessible community hub, with all organizations having street frontage. There is a community restaurant, a daycare, a play space (Petite Maison) for children ages 6-12, a youth centre (Maison des jeunes) for ages 12-17 and a multipurpose room. 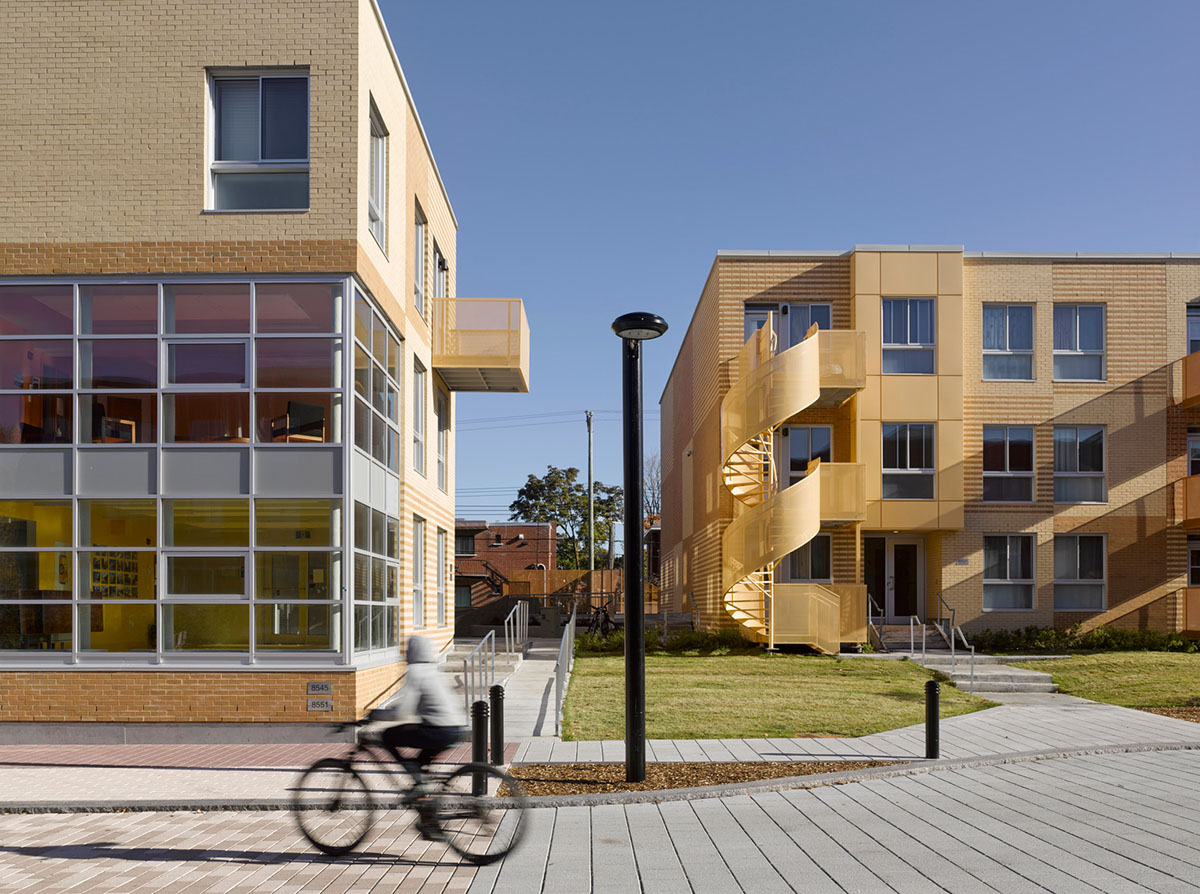 The architects made three strategic choices: using more colour, adding balconies and spiral staircases to give all residents direct access to their apartments, and the creation of openings on the buildings’ previously windowless sides.

The apartments were thoroughly refreshed and fitted with taller windows. Interior layouts were modified, particularly in the buildings that were given an added floor. The units in these buildings were previously separated by a hallway; they are now crossing apartments. A second improvement was to equip the apartments with overhanging rather than recessed balconies, creating added living space that is much appreciated in hot weather, particularly by people of modest means. 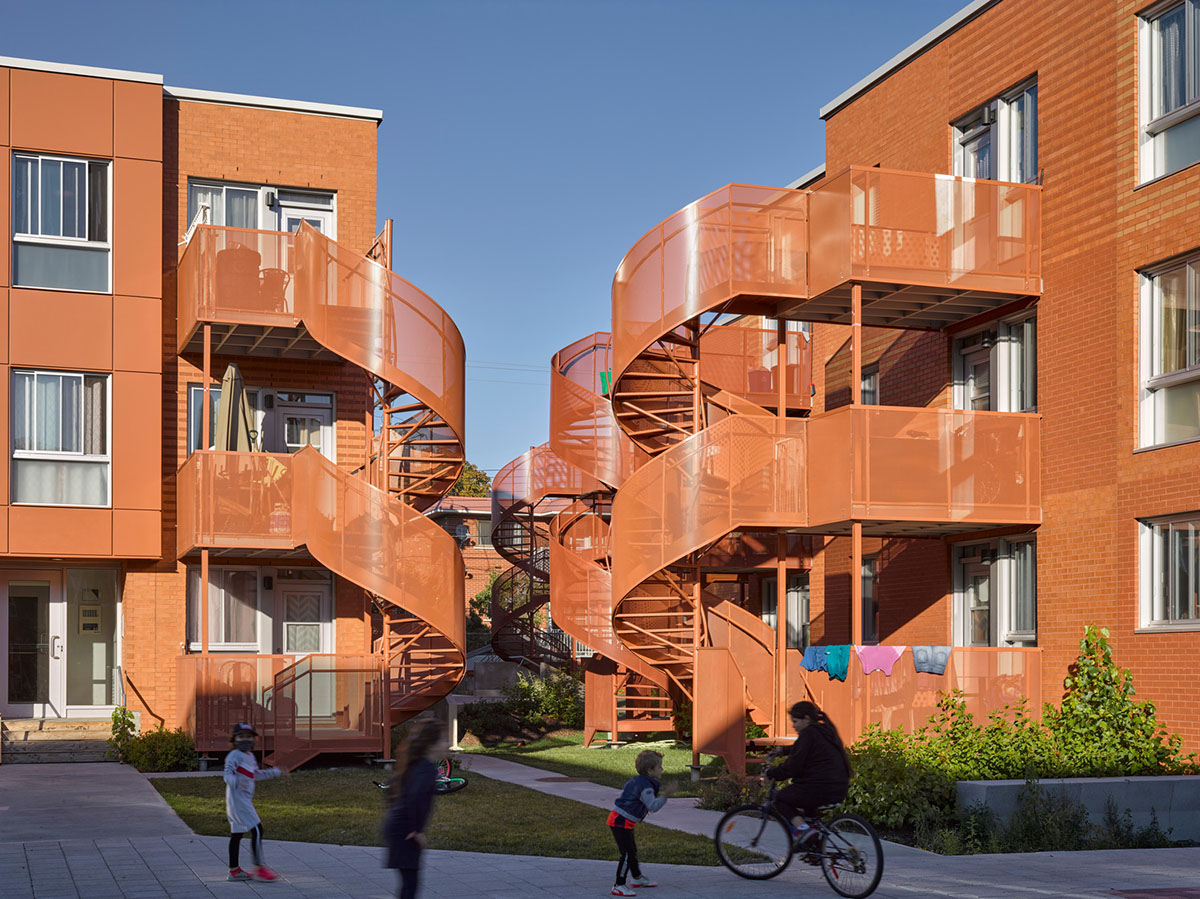 The architects drew inspiration from the work of a great Venezuelan artist, Carlos Cruz-Diez (1923-2019). His work, still seen today in numerous public places in Europe and South America, plays on the kinetic effects produced by closeness and superimposition.

The use of two similar colours to create a third made it possible to produce seven distinct colours using four base tones, from very pale yellow to a rich brick-red. The composition of the façades was determined by the interplay of warm colours, resulting in a complete transformation of the image projected by the complex. 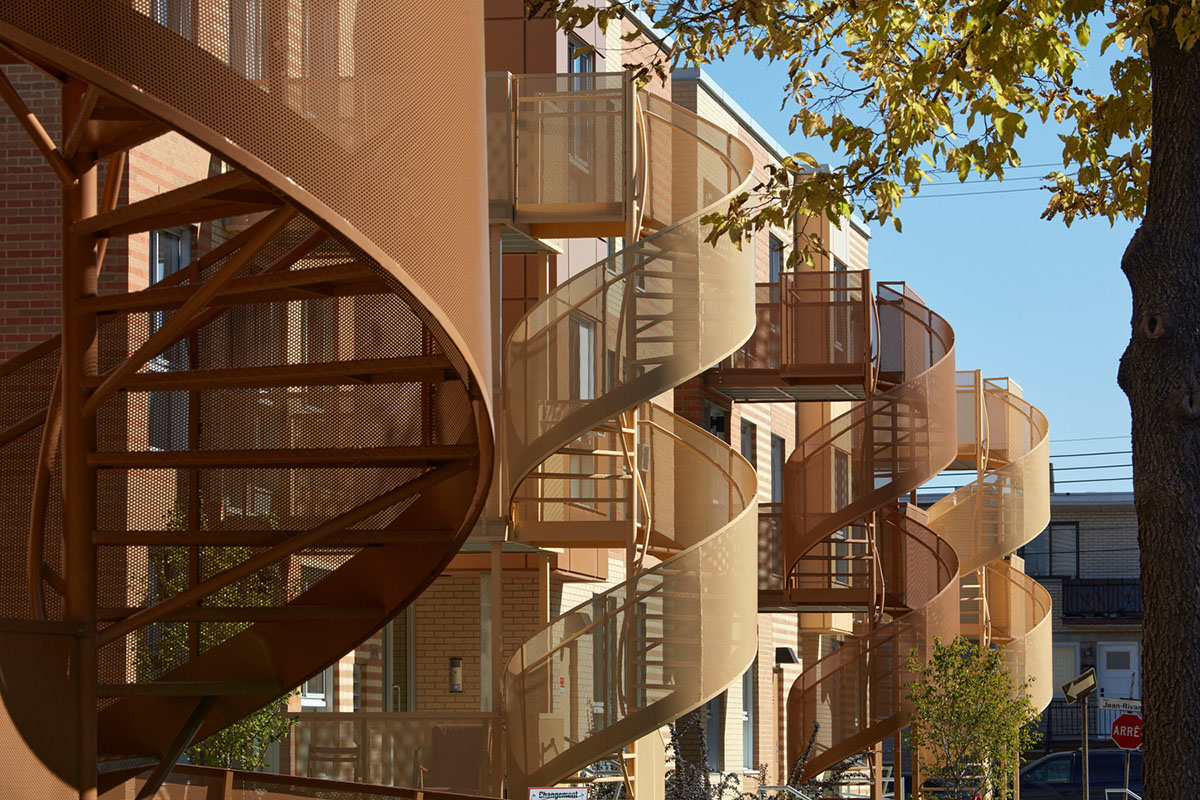 In this joyful new setting, the use of colour helps build residents’ sense of belonging and identity. The architects wanted to transform constraints into assets and offer residents a dignified, luminous and safe environment, disrupting the stigma surrounding social housing and its association with poverty.

The project won an award of excellence from the Ordre des Architectes du Québec in the multi-unit residential category in 2021. 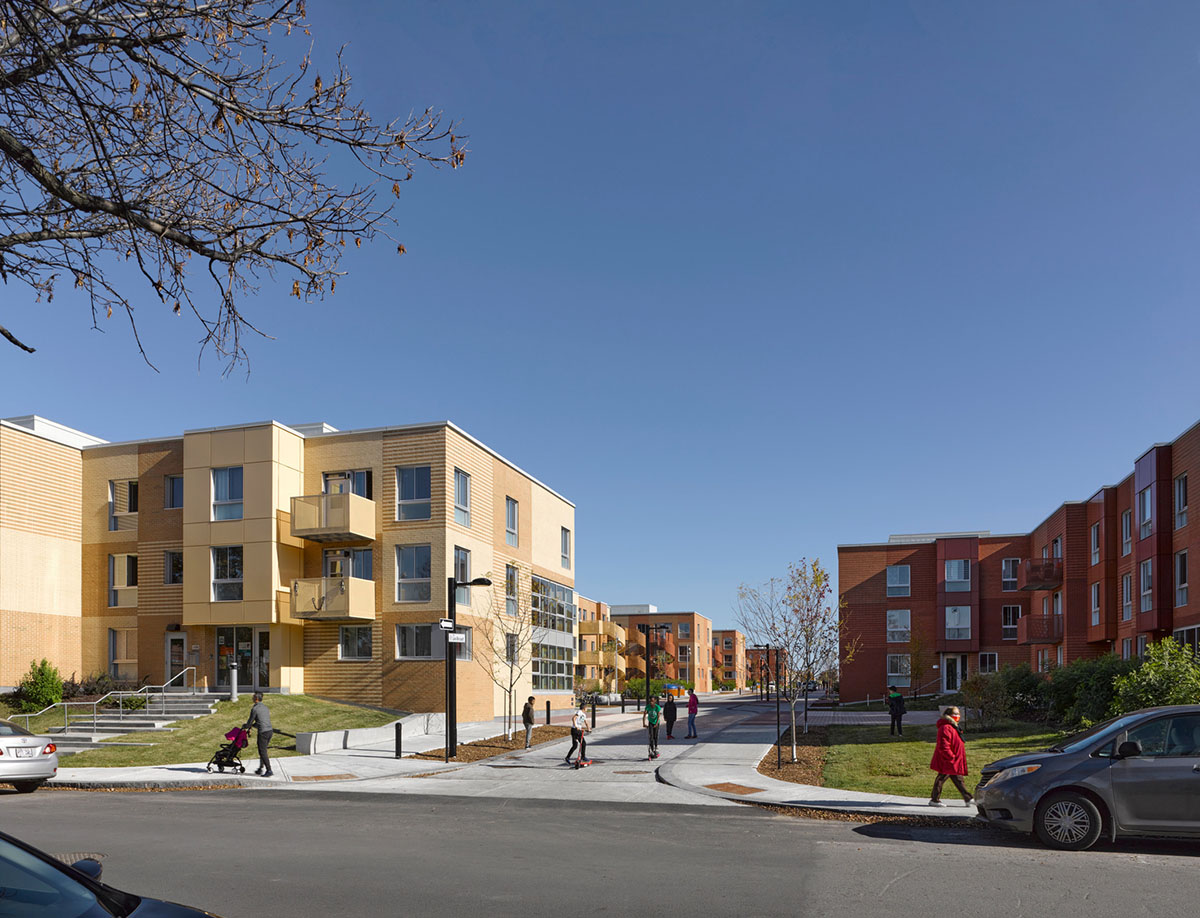 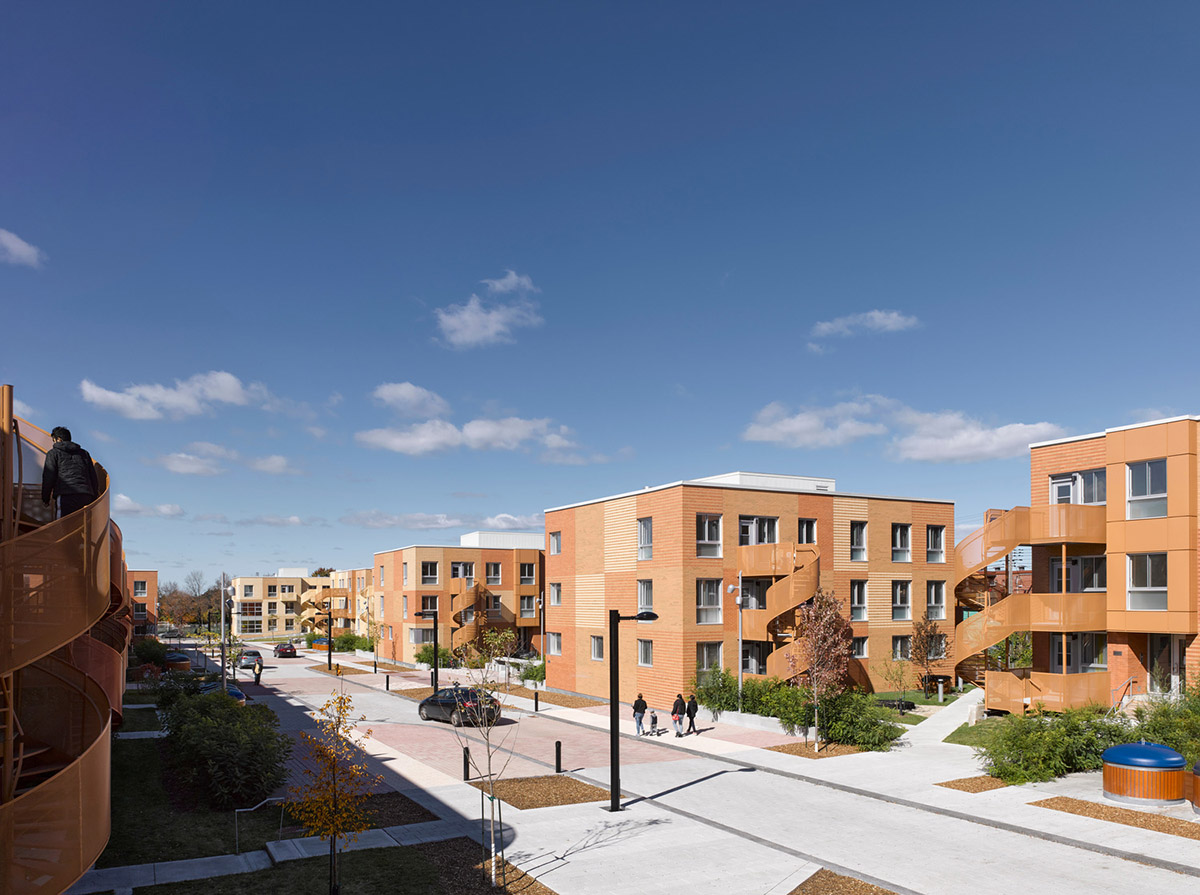 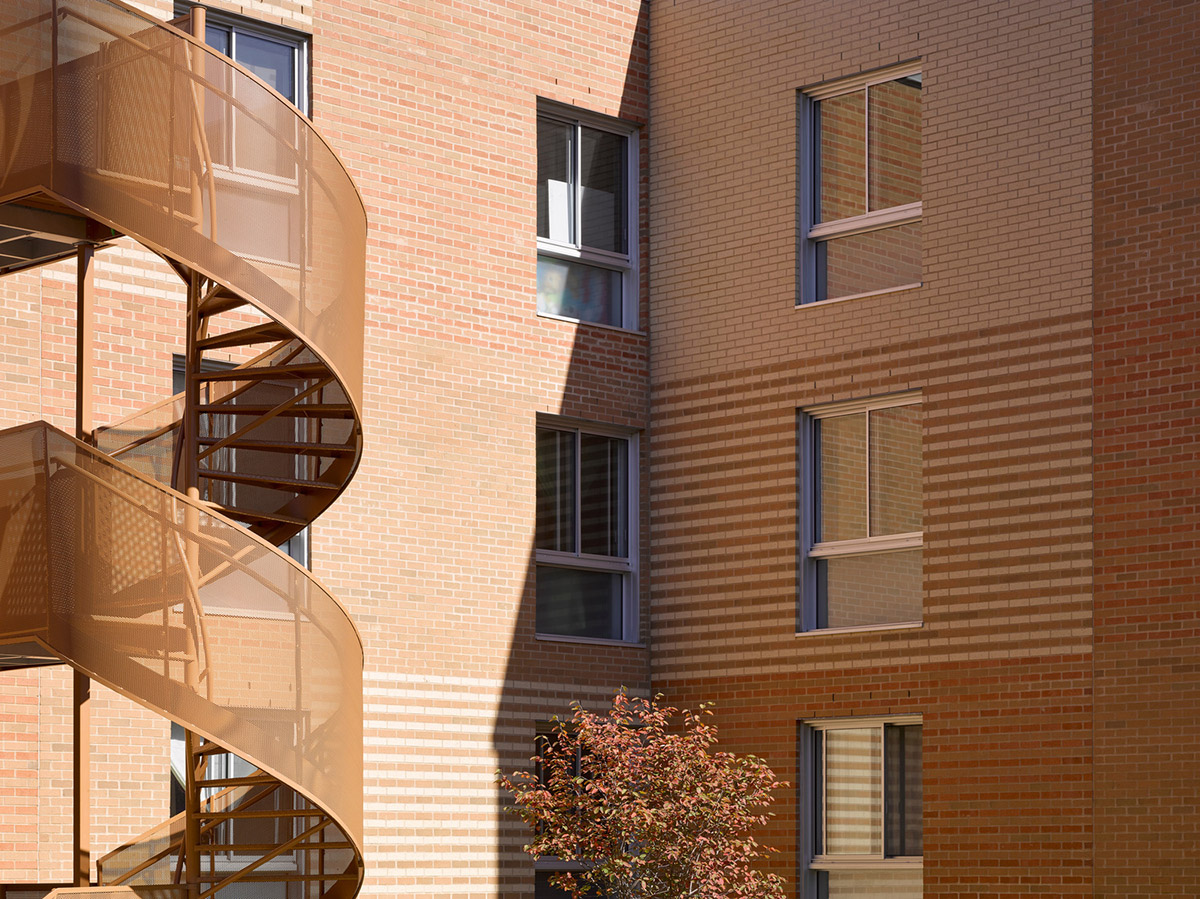 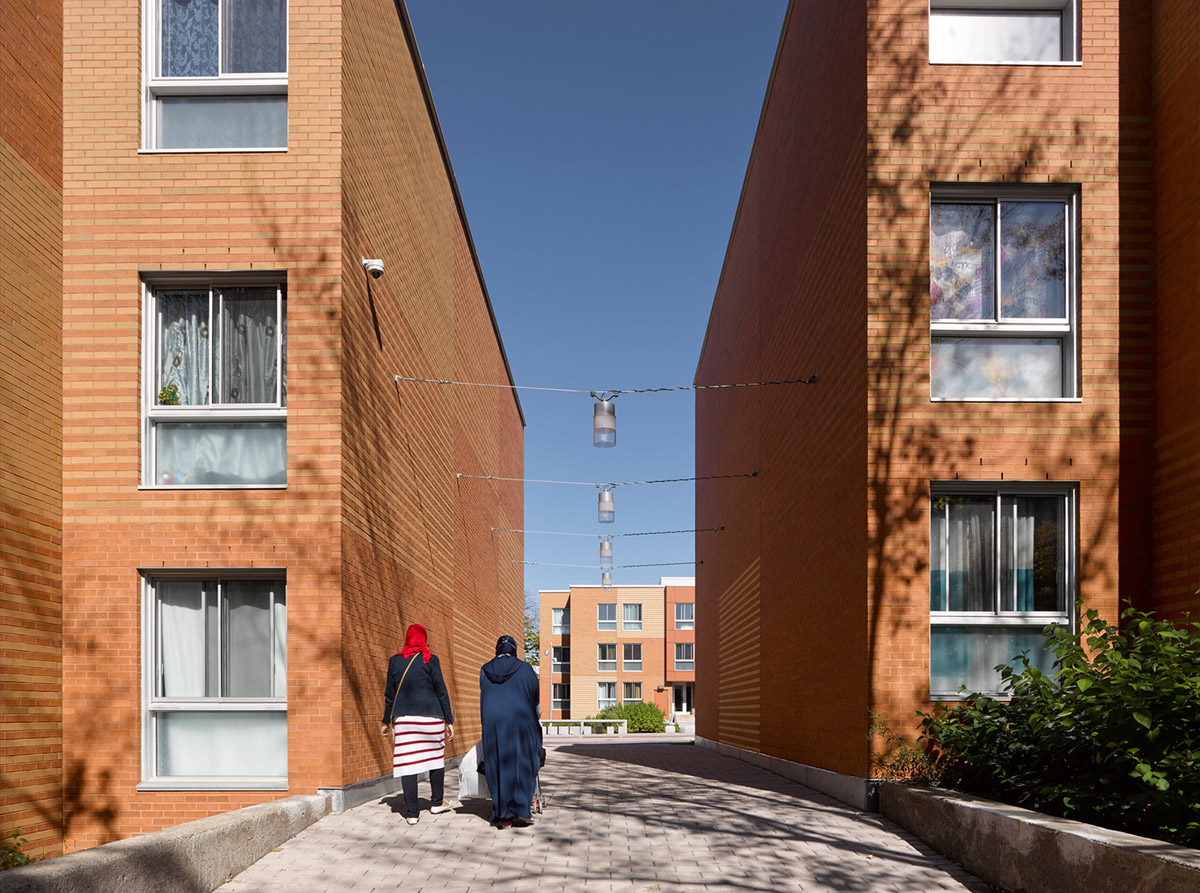 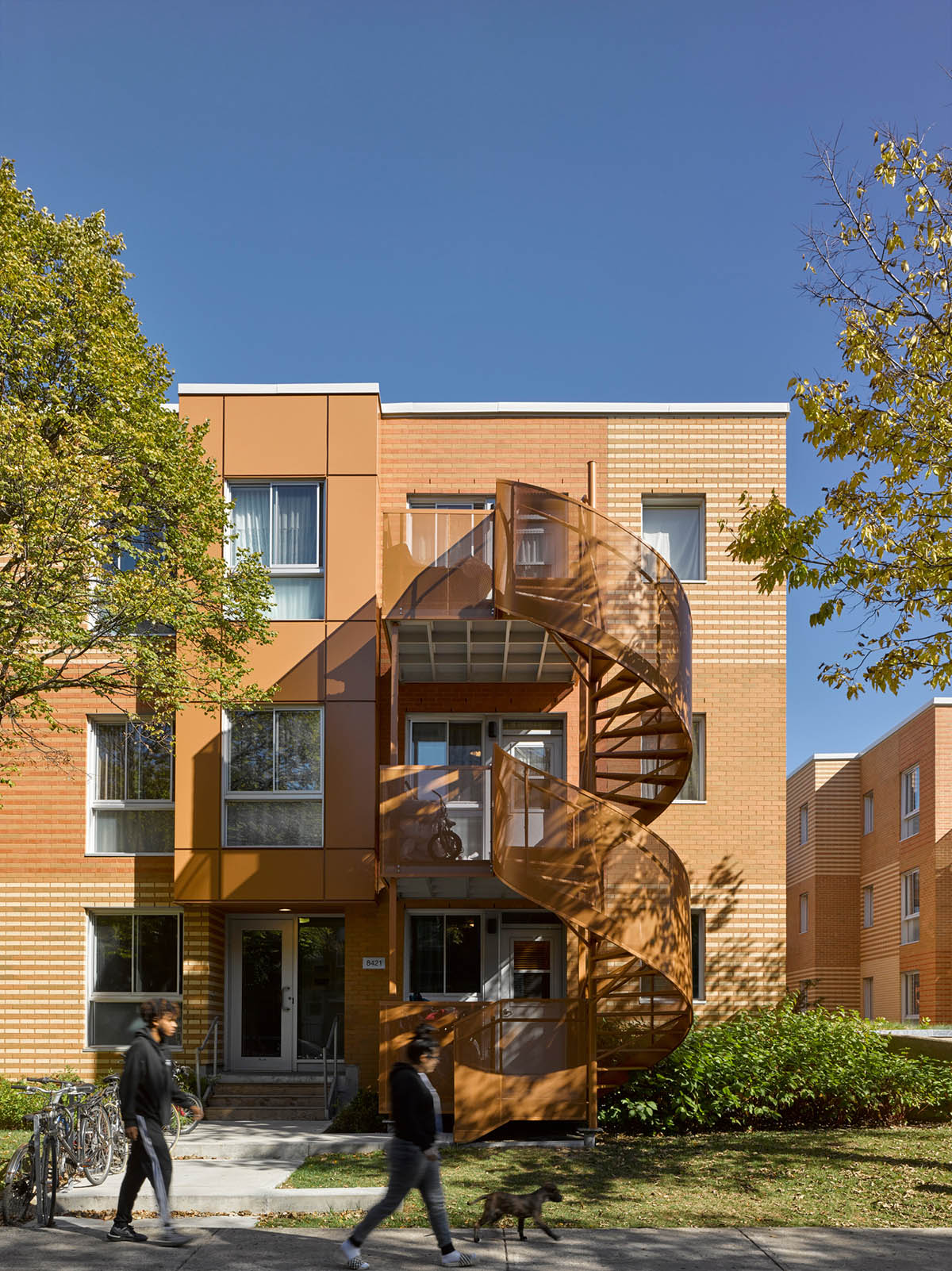 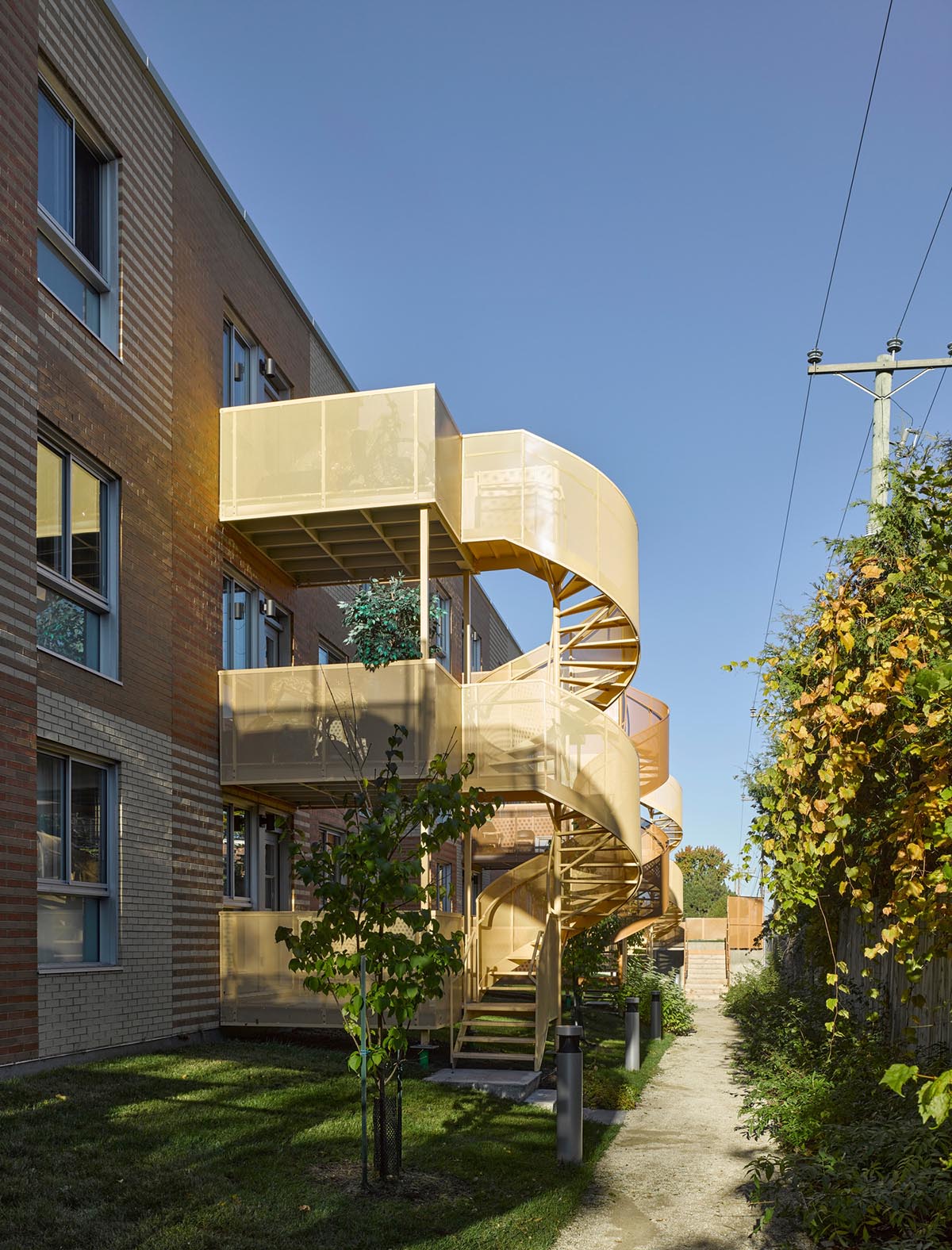 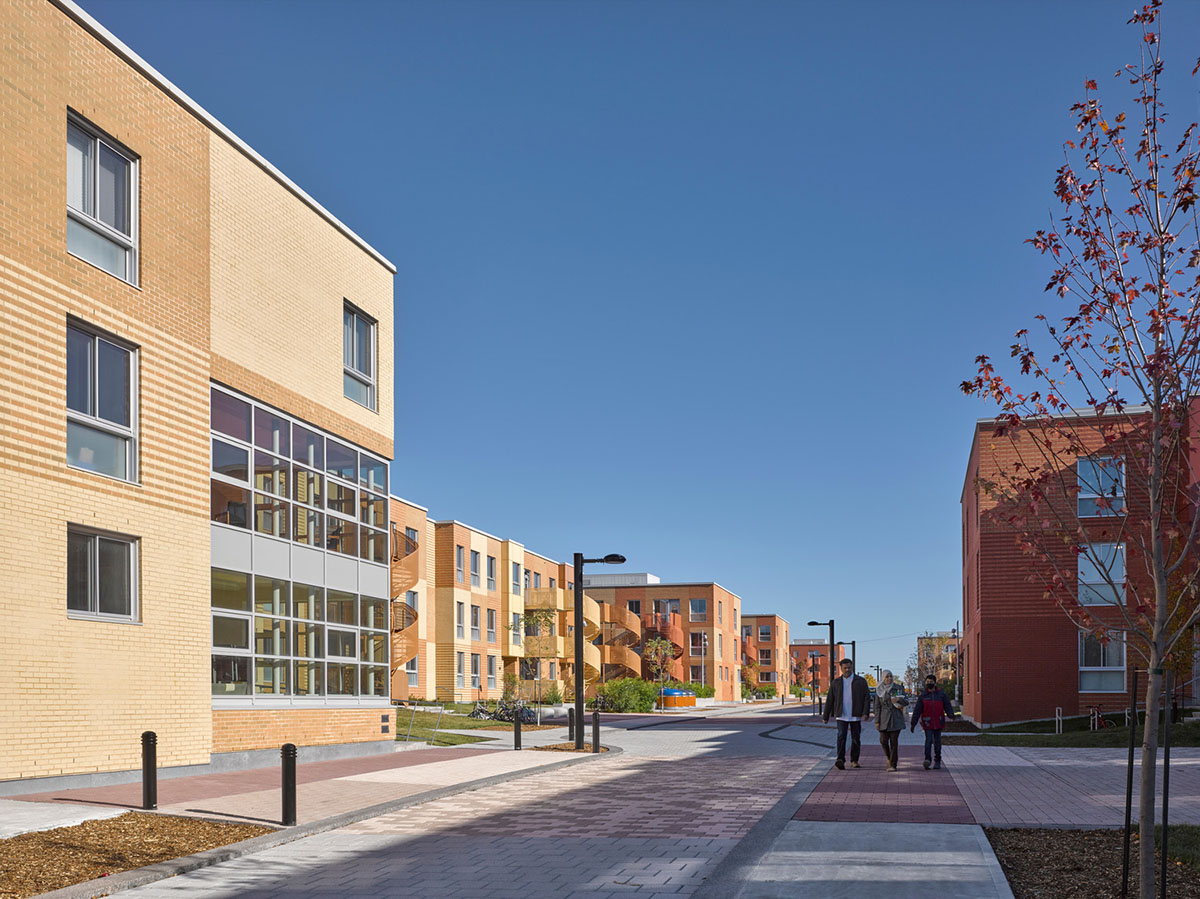 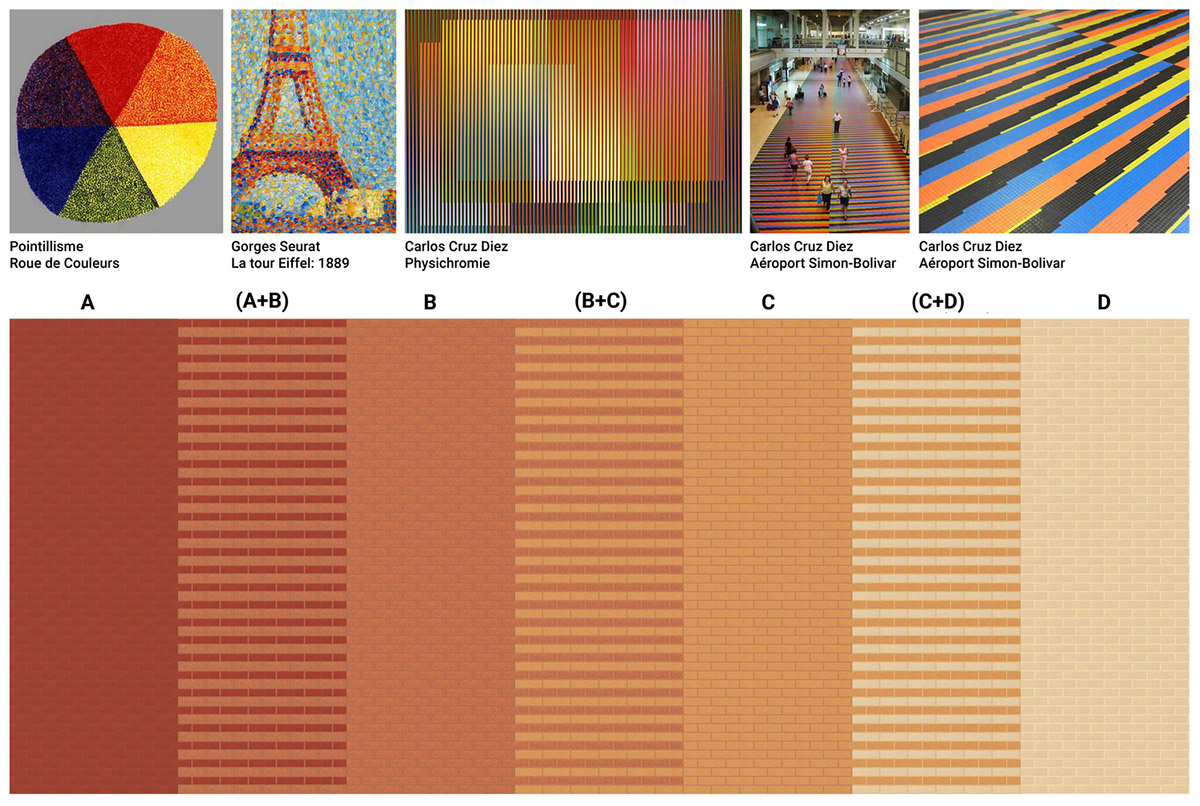 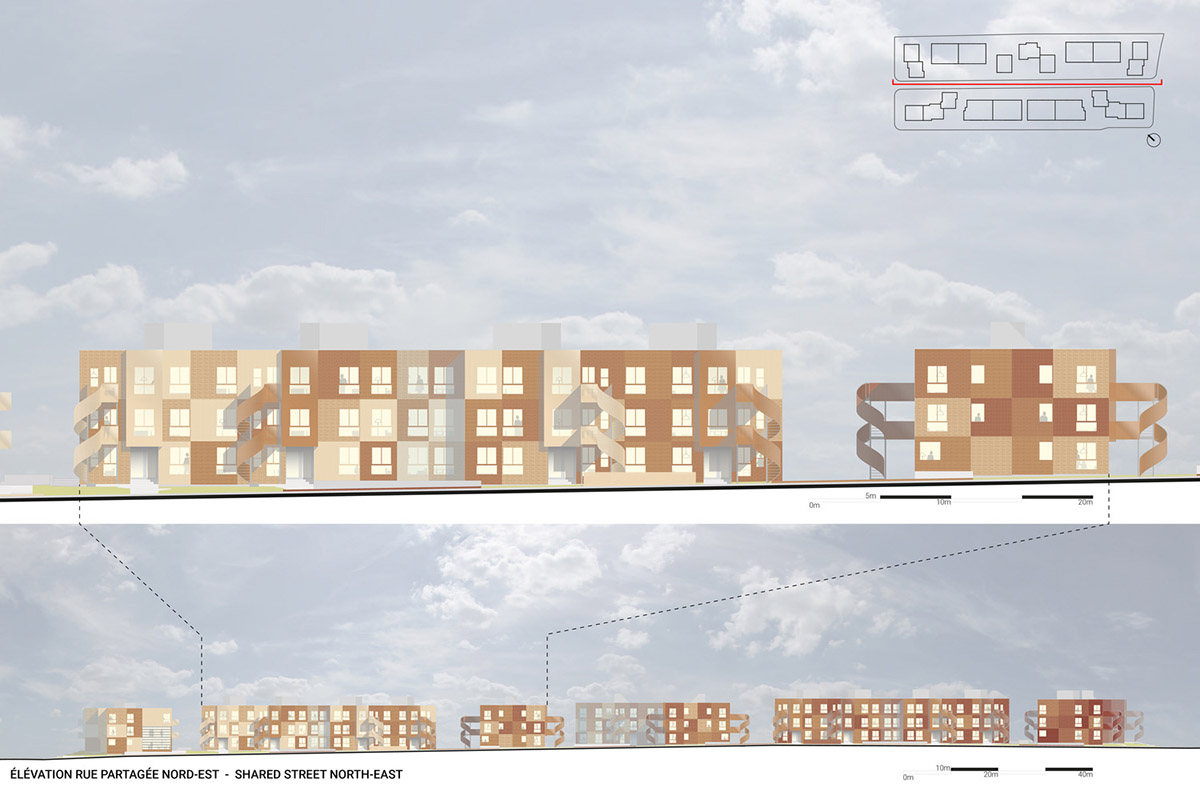 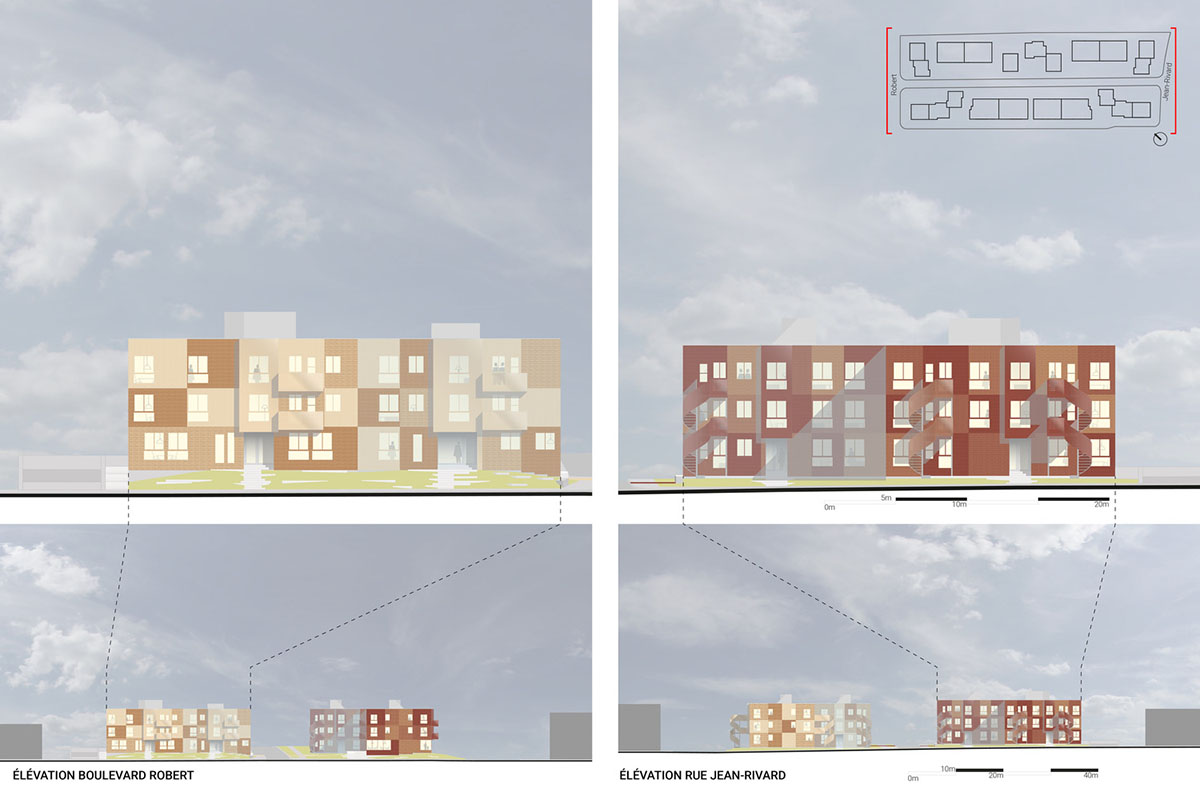 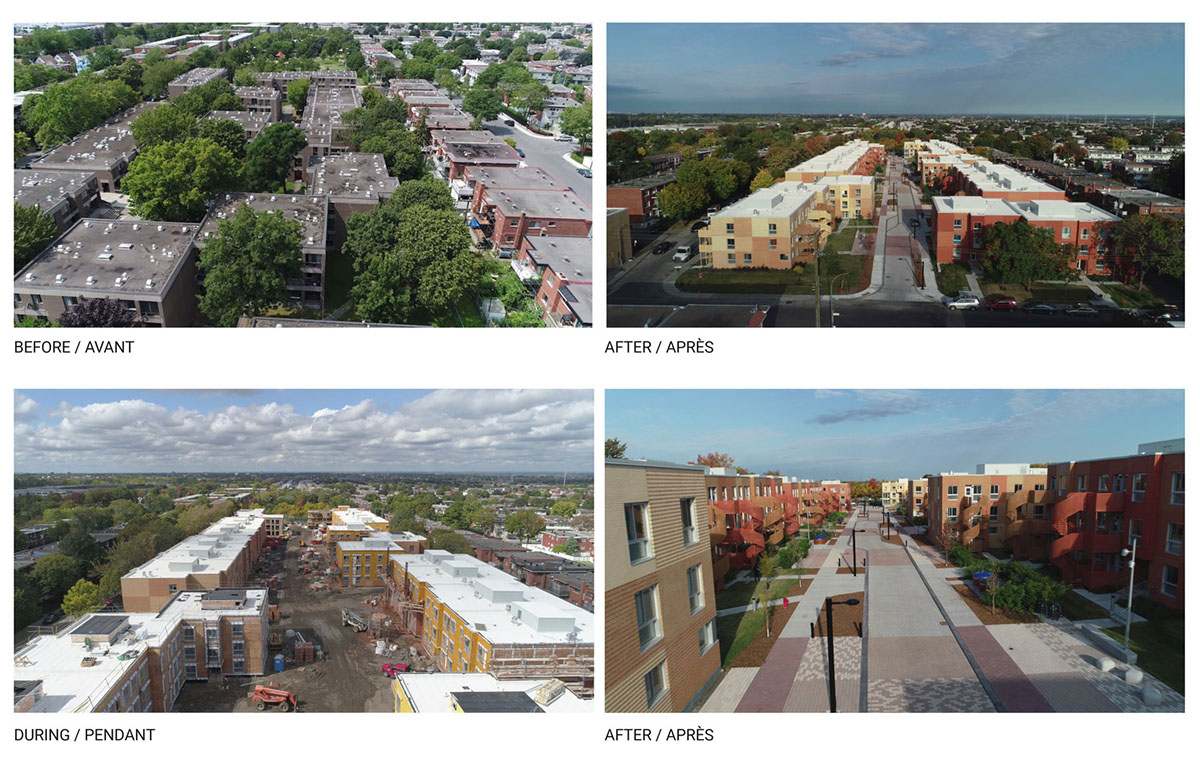 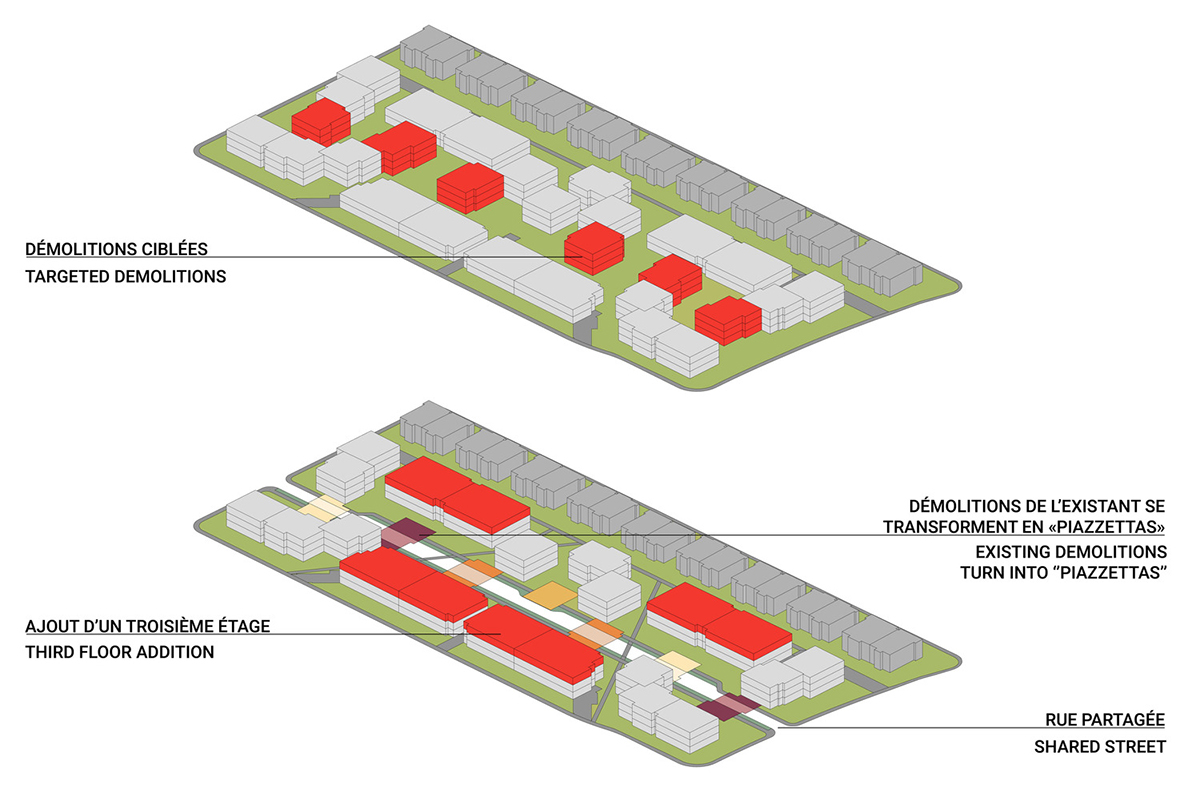 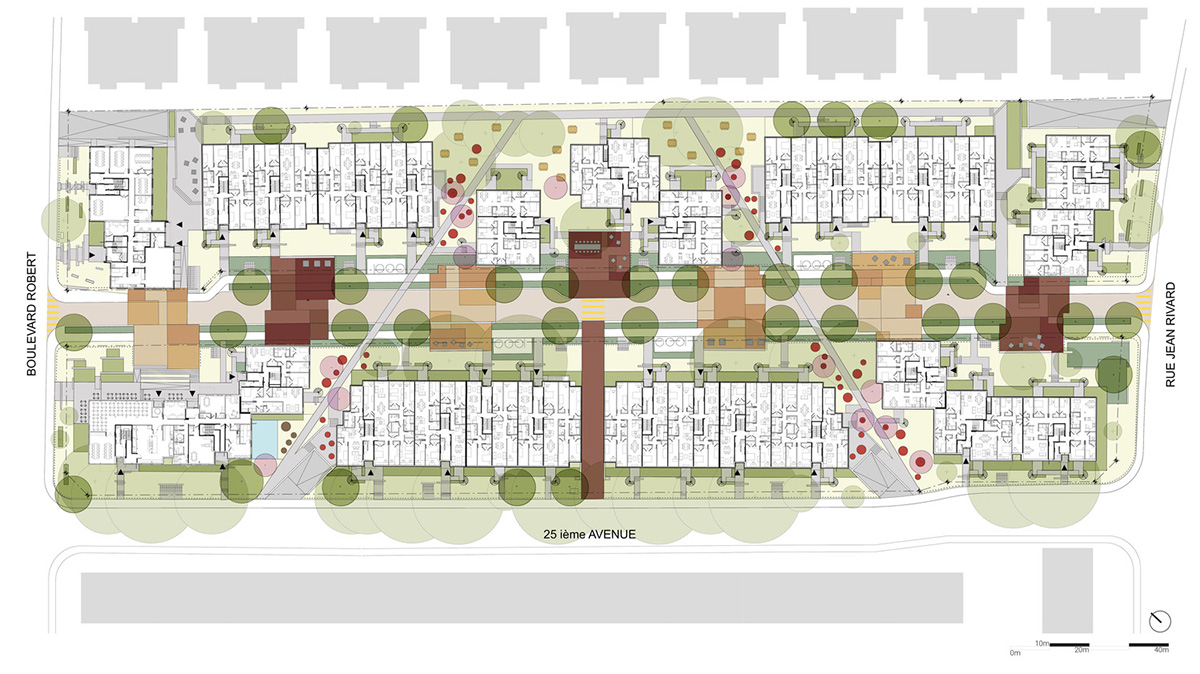 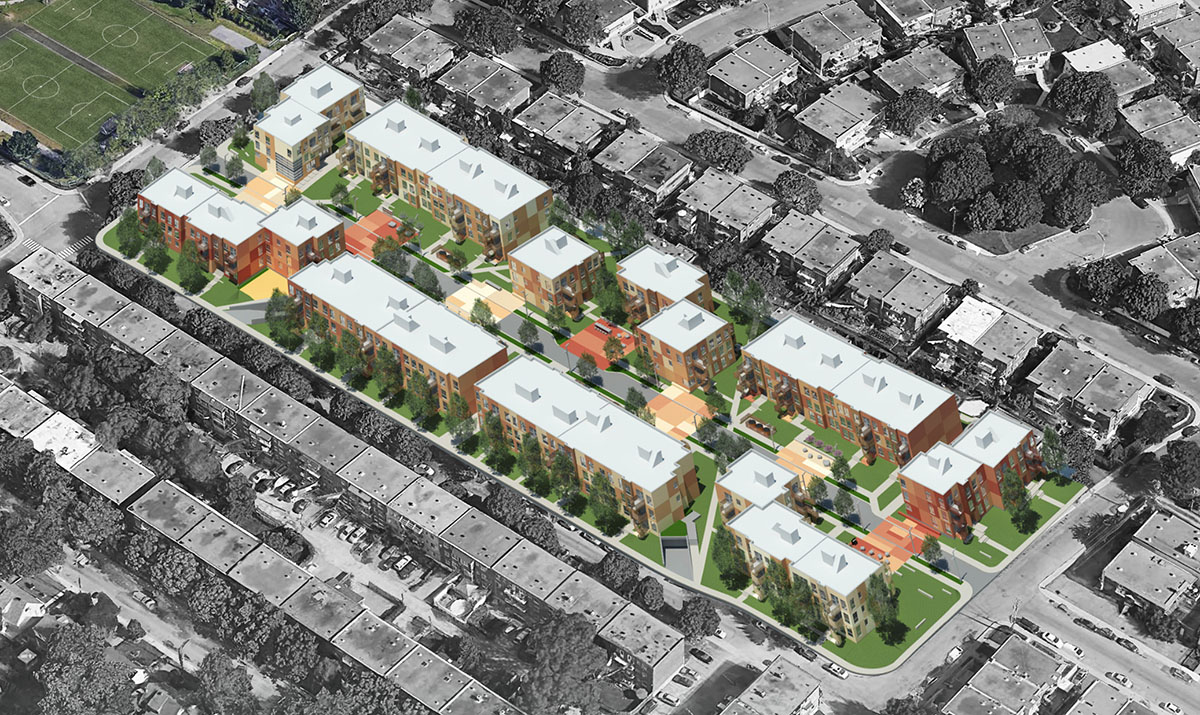 Saia Barbarese Topouzanov Architectes was founded by Mario Saia in 1968. Dino Barbarese and Vladimir Topouzanov came aboard in 1987 and 2002 respectively. The firm acts as an architecture and urban design studio.