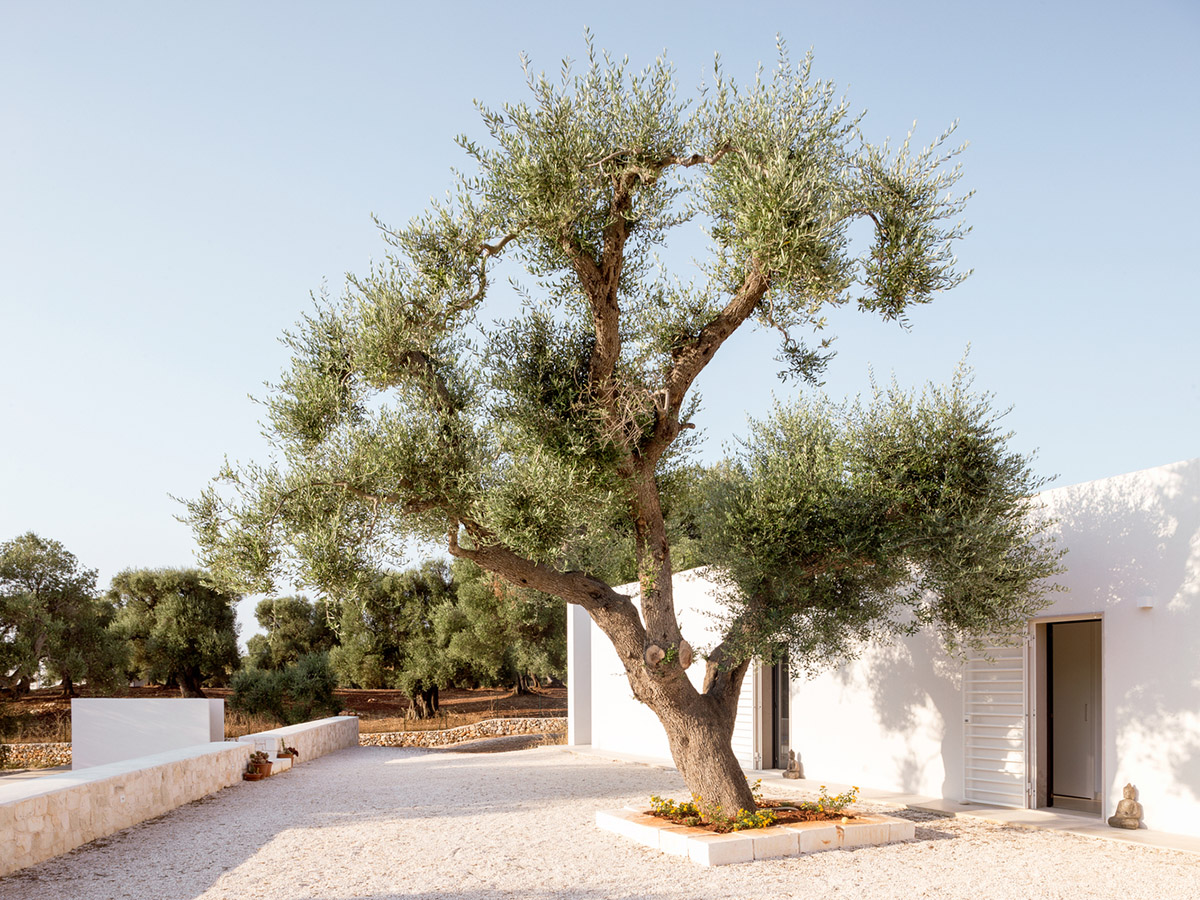 Italian architecture firm Noname Studio has completed a townhouse featuring all-white sculpted abstract volumes among olive trees in Carovigno, a small town in the province of Brindisi, in the southern region of Puglia, Italy.

The 170-square-metre house, named Villa Uliveto, is derived from the site's natural elements in which it is immersed. 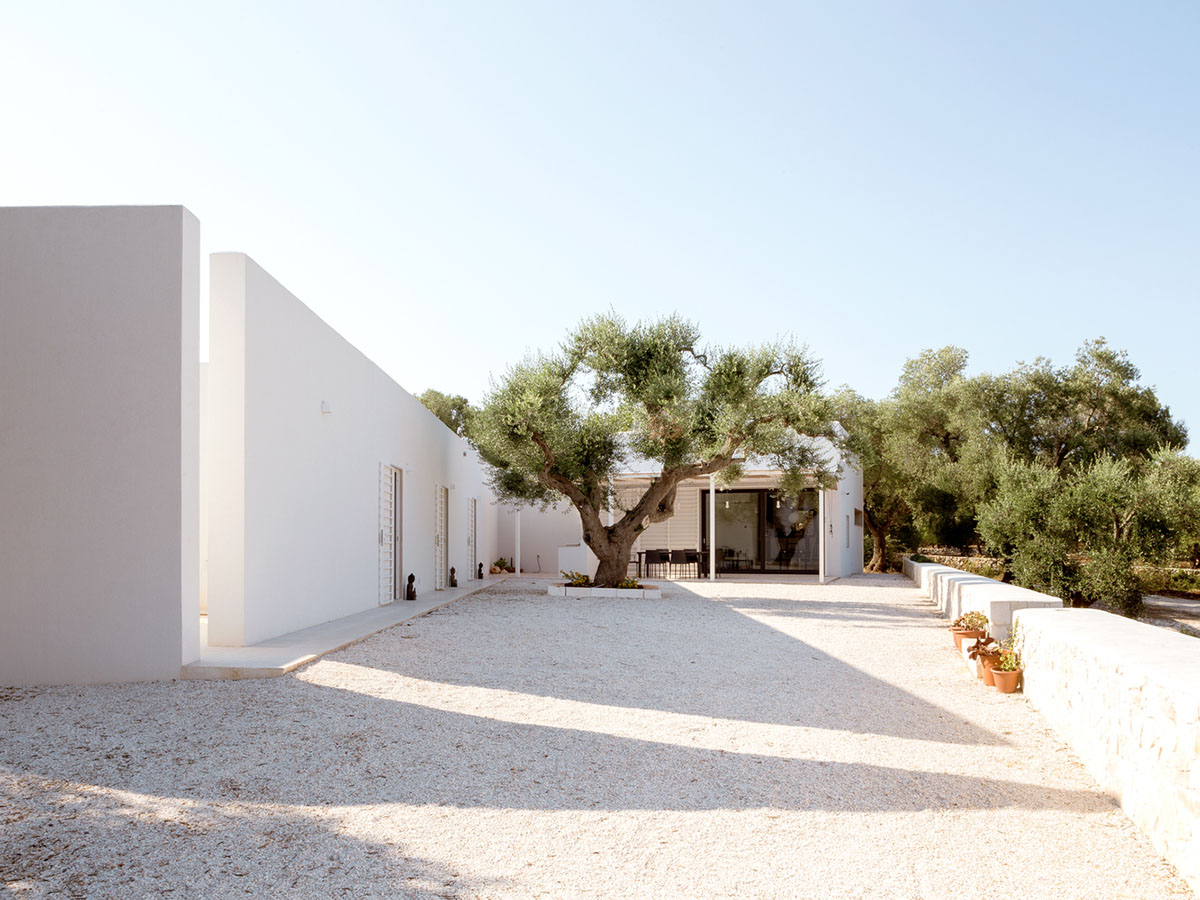 Divided into two major parts comprised of crossing volumes, the linear part, extended from east to west, consists of four rooms, while the second big volume houses common areas such as kitchen and living room, with a terrace. At the end of the narrow hall merging the two volumes is a bathroom that serves for both parts. 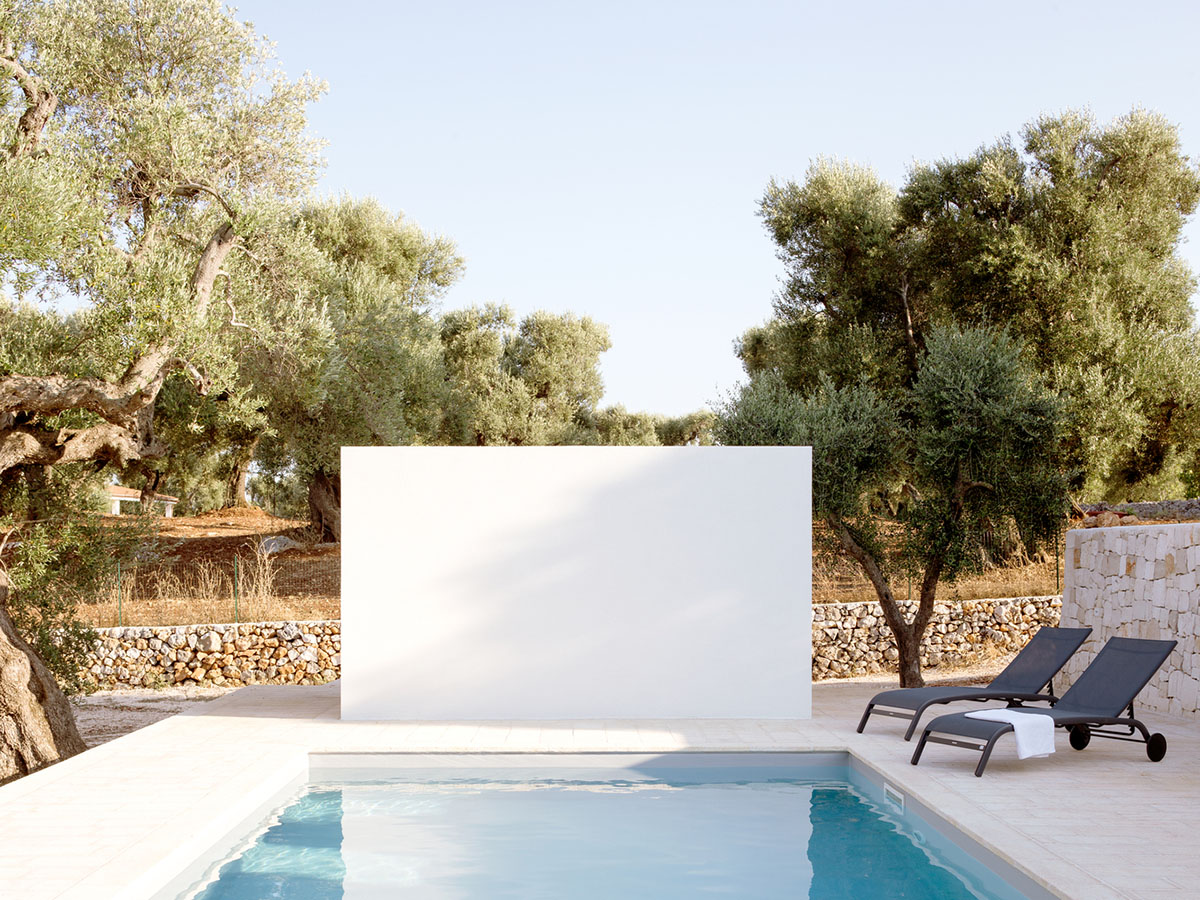 The first consists of a low existing limestone blocks wall delimiting the karst part of the terrain from the natural podium on which the villa stands.

The olive trees, an almost constant presence throughout the Apulian agricultural landscape as well as an invaluable resource, give the second element: abstract sculptures shaped by time and wind. 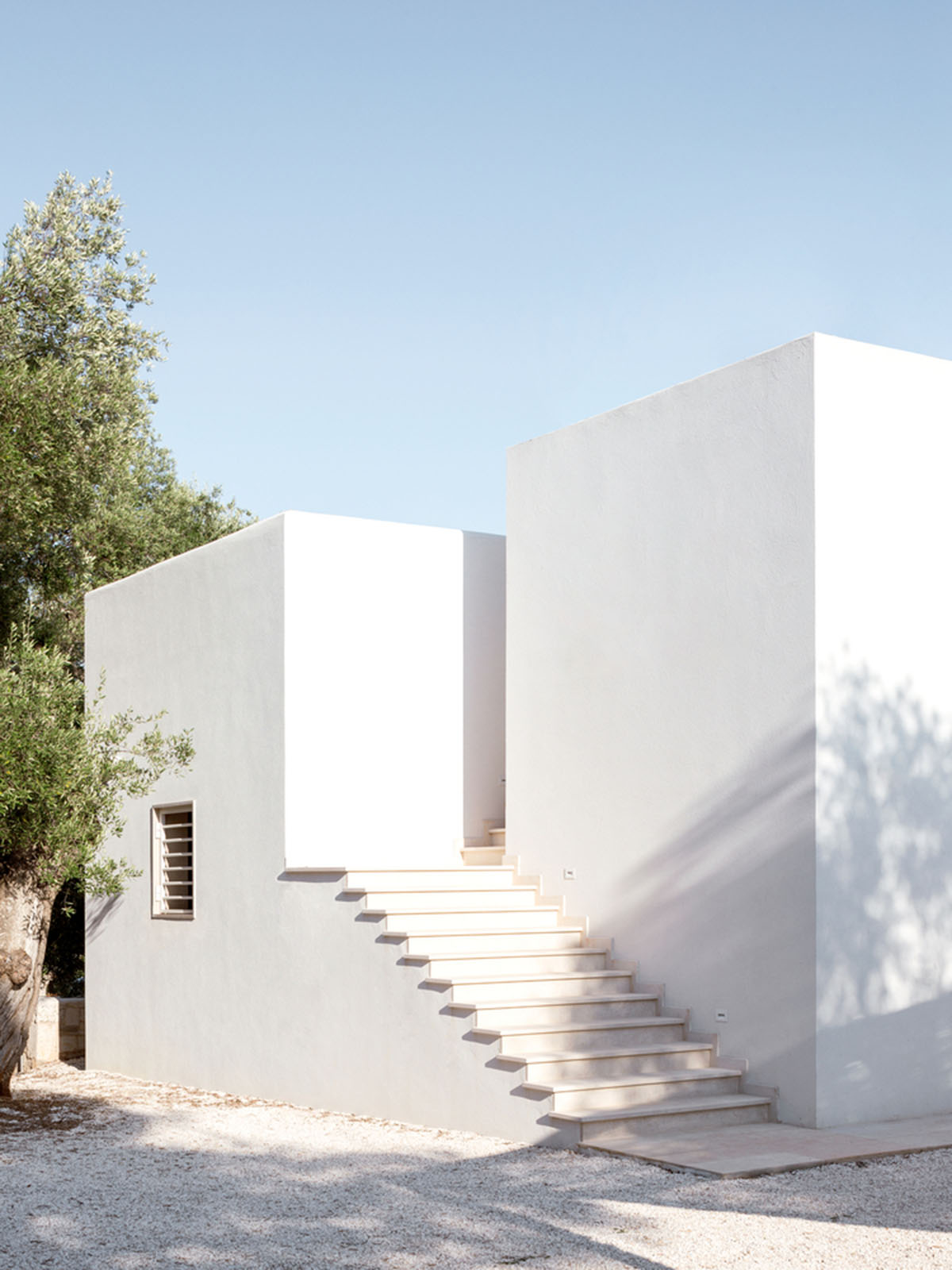 Drawn on a linear layout, the house is completely populated by medium-sized olive trees. The house is accessed through a gravel driveway that moves to reveal humanized nature only at the end.

During construction, the architects paid attention to the existing trees and preserved their locations as much as possible, while they integrated the olive trees into the general plan, only three of which have been relocated within the land. 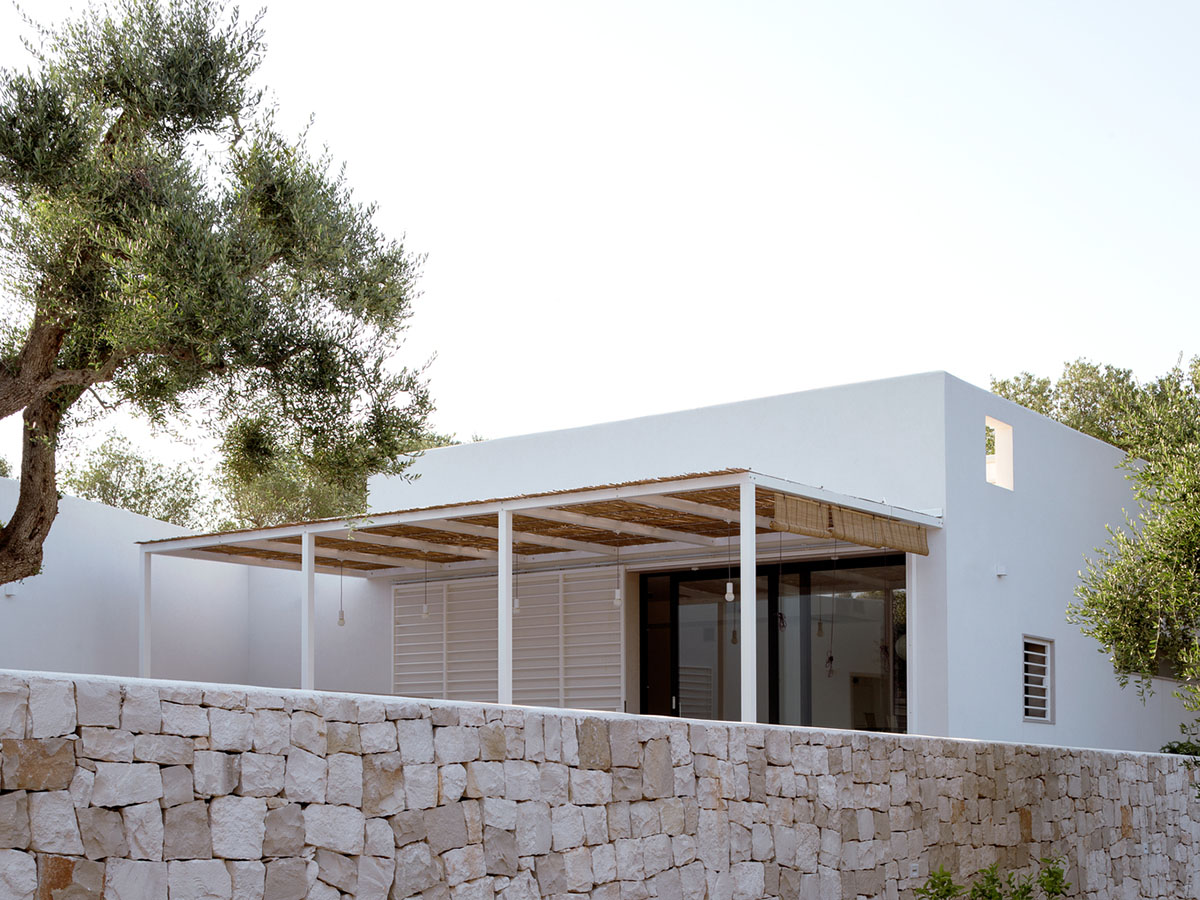 "A centuries-old olive tree, casually placed in the middle of the natural podium, is the real central point of the building, whose presence determines its footprint," said Noname Studio.

"The composition of the building explicitly announces the hierarchy of functions and their reciprocal relationship in space: a cube contains the living area of the villa and intersects a low oblong prism of the sleeping area."

"The two volumes are slightly rotated to embrace the centuries-old olive tree, the center of an open terrace and the main relational space as well as the heart of the outdoor life," the firm continued. 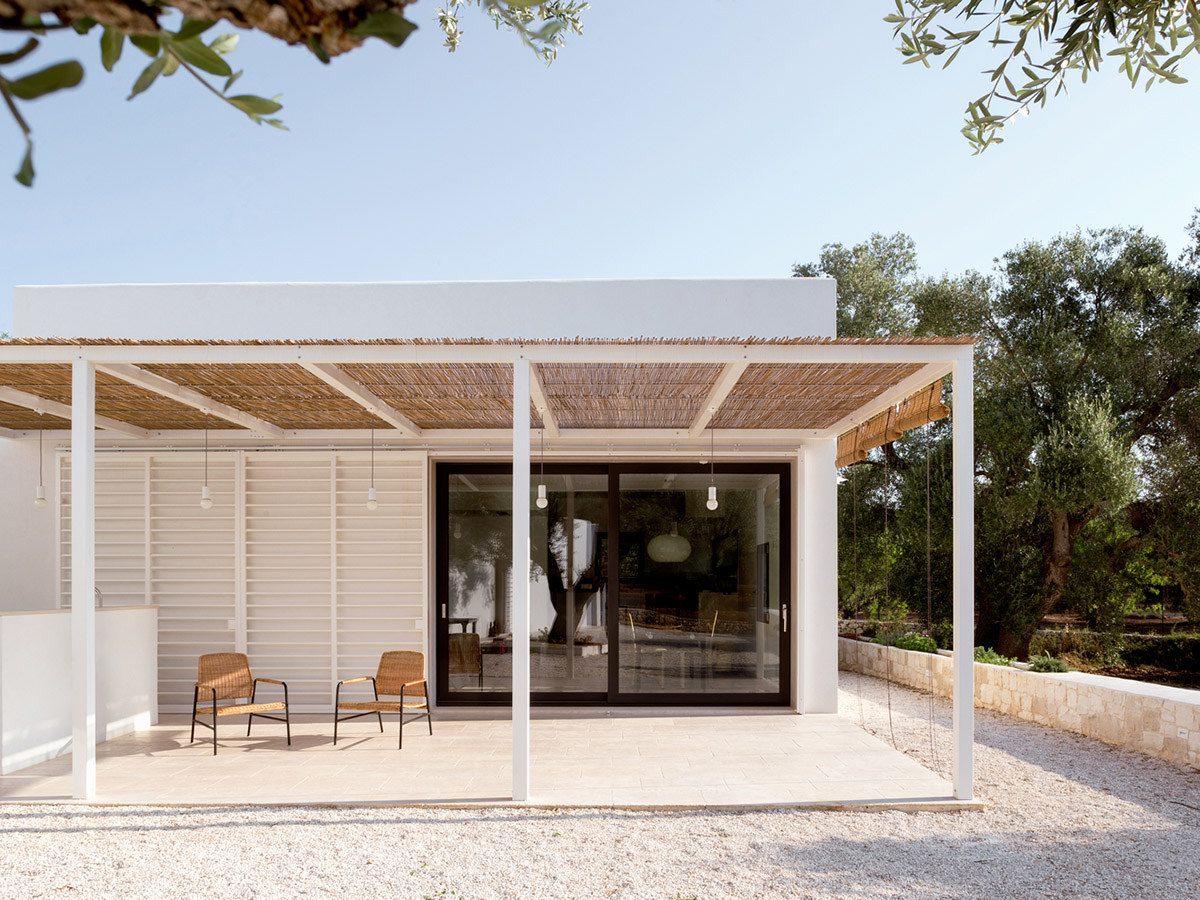 The boundaries and transitions between the inside and the outside of the house are expressed in a system of natural light mediation devices.

While a vertical skylight allows the winter light, lower on the horizon, it penetrates to the interior of the house and interrupts the attic between the kitchen and the dining area. 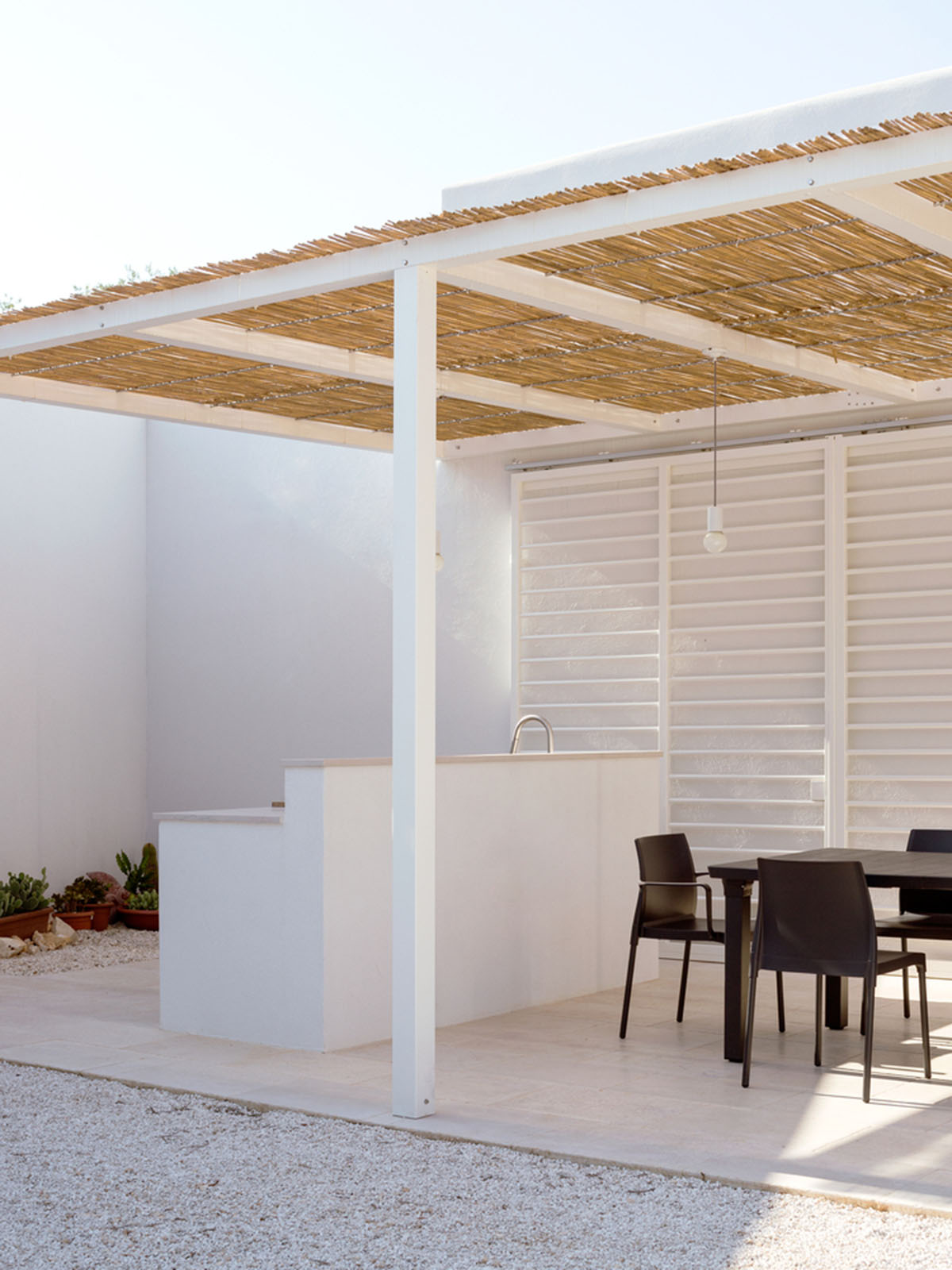 The different geometry of the openings frames the rural landscape giving it always distinct aspects, the vertical pivot opening of the master bathroom overlooks a private patio, a place where the owners can live following the rhythm of nature. The open room at the end of the room slat is a window to the sky. 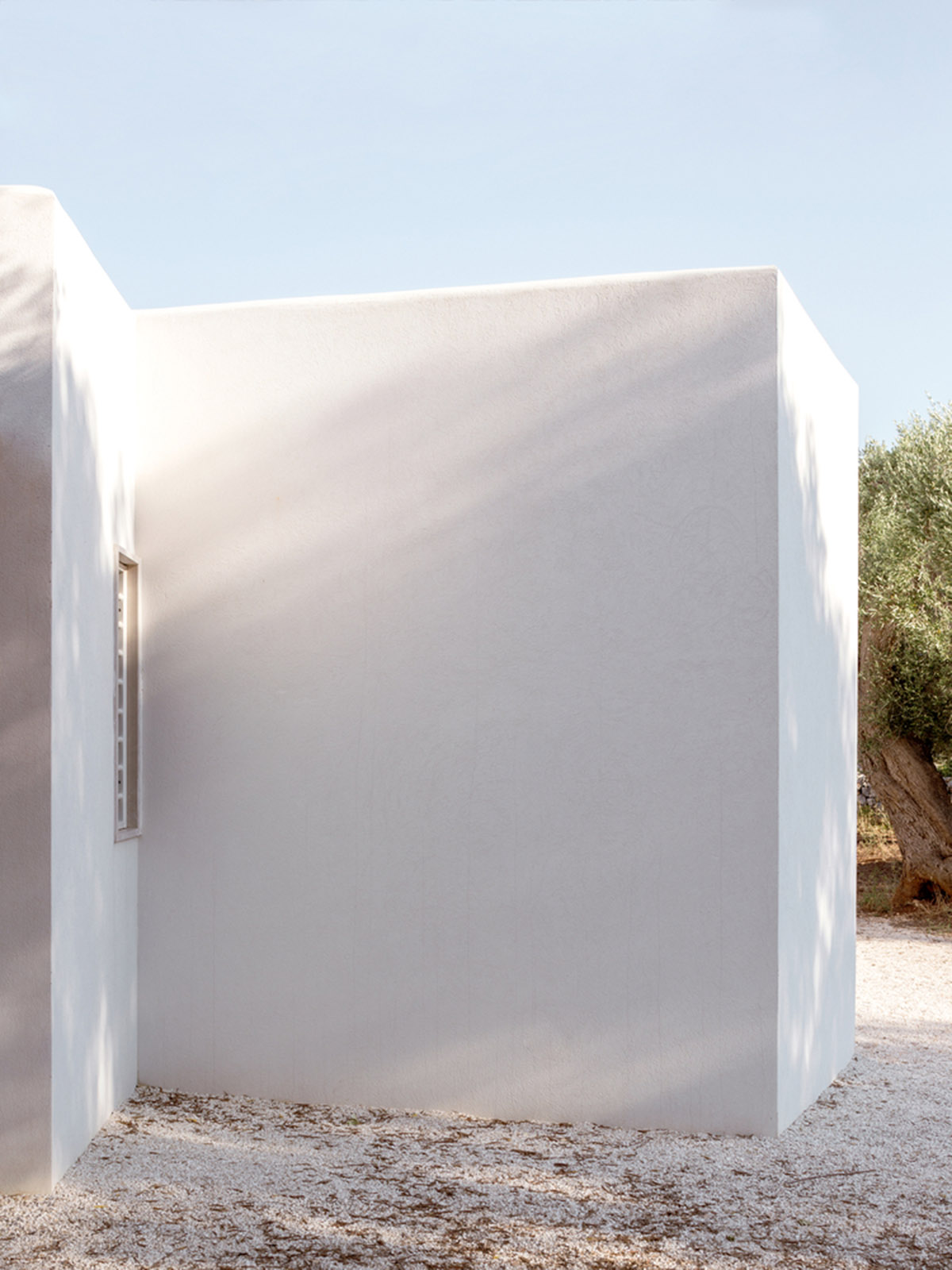 The house has a specific character defined by a rigid geometry of pure forms. The exterior of the house is covered with white lime and stands out against the twisted and absolute landscape of the olive grove.

The team used Apricena stone, a limestone material extracted on the slopes of the Gargano with shades ranging from beige, ivory, and pink, in different parts of the house and declined in its surface variants. 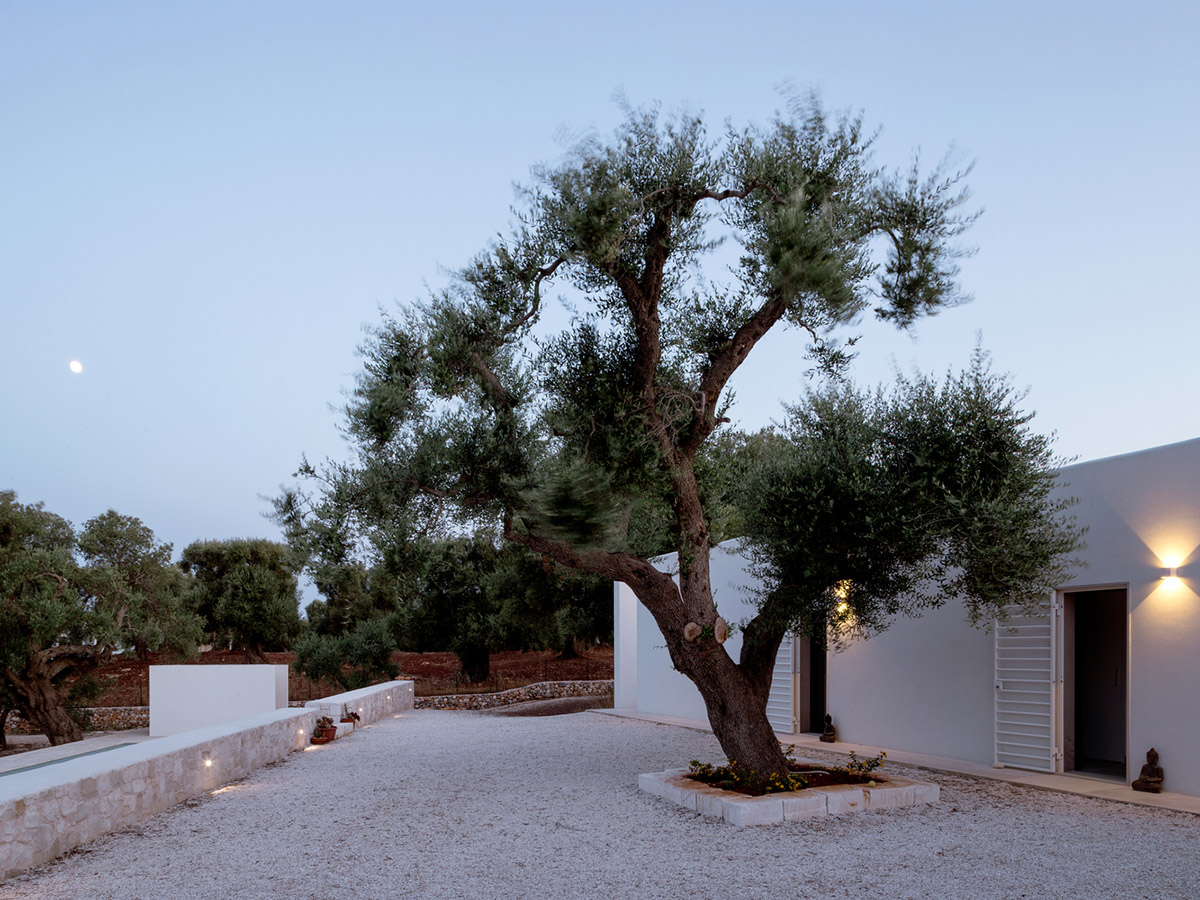 The same stone runs to the tumbled tiled floor, surrounds the windows with polished slabs, marks the access thresholds with bush-hammered slabs, and is used as an internal Palladian cladding.

The furnishings do not follow a single stylistic line but belong to distant "worlds" which, surprisingly, manage to dialogue in harmony, describing the cosmopolitan soul of the owners. 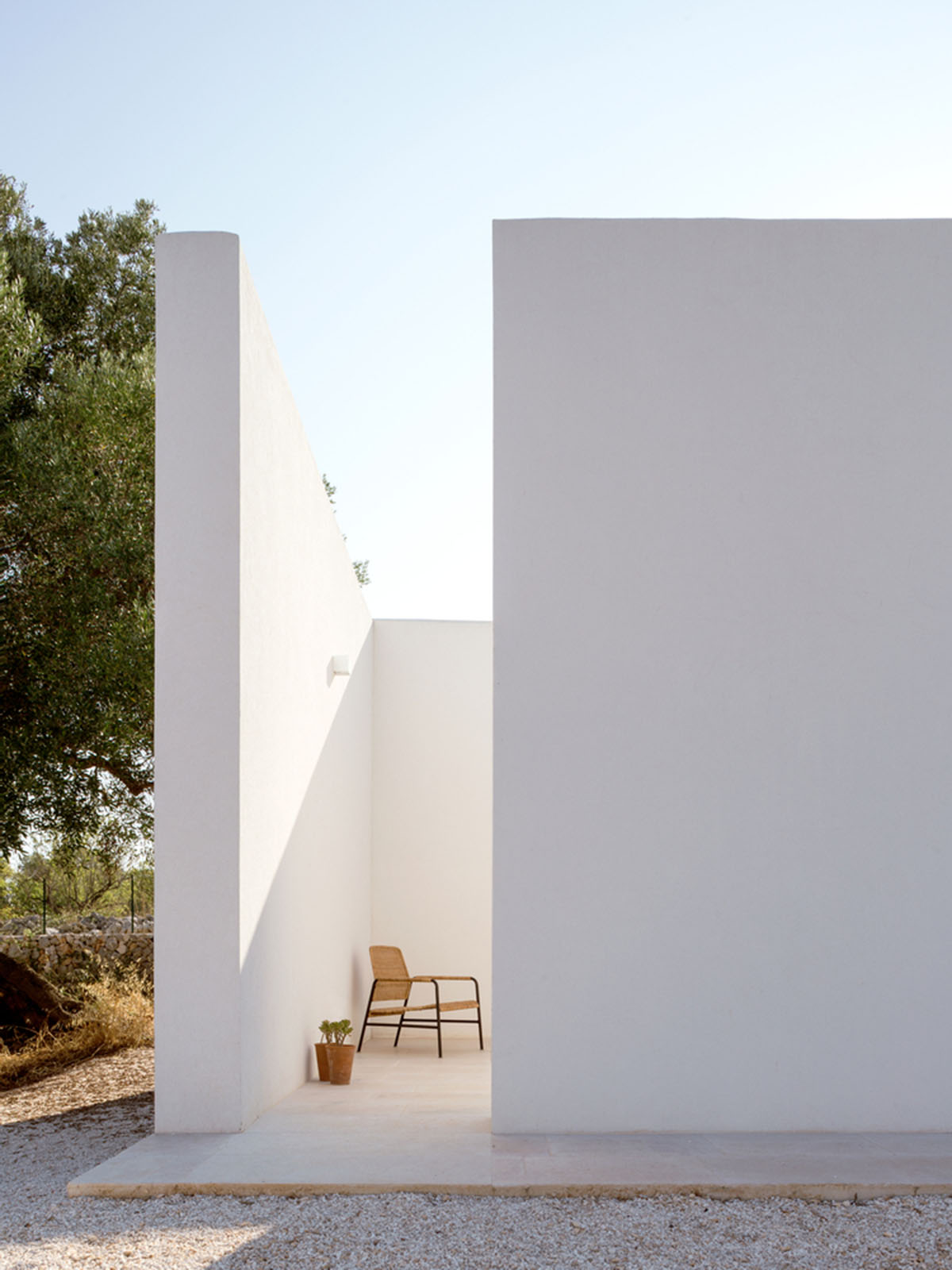 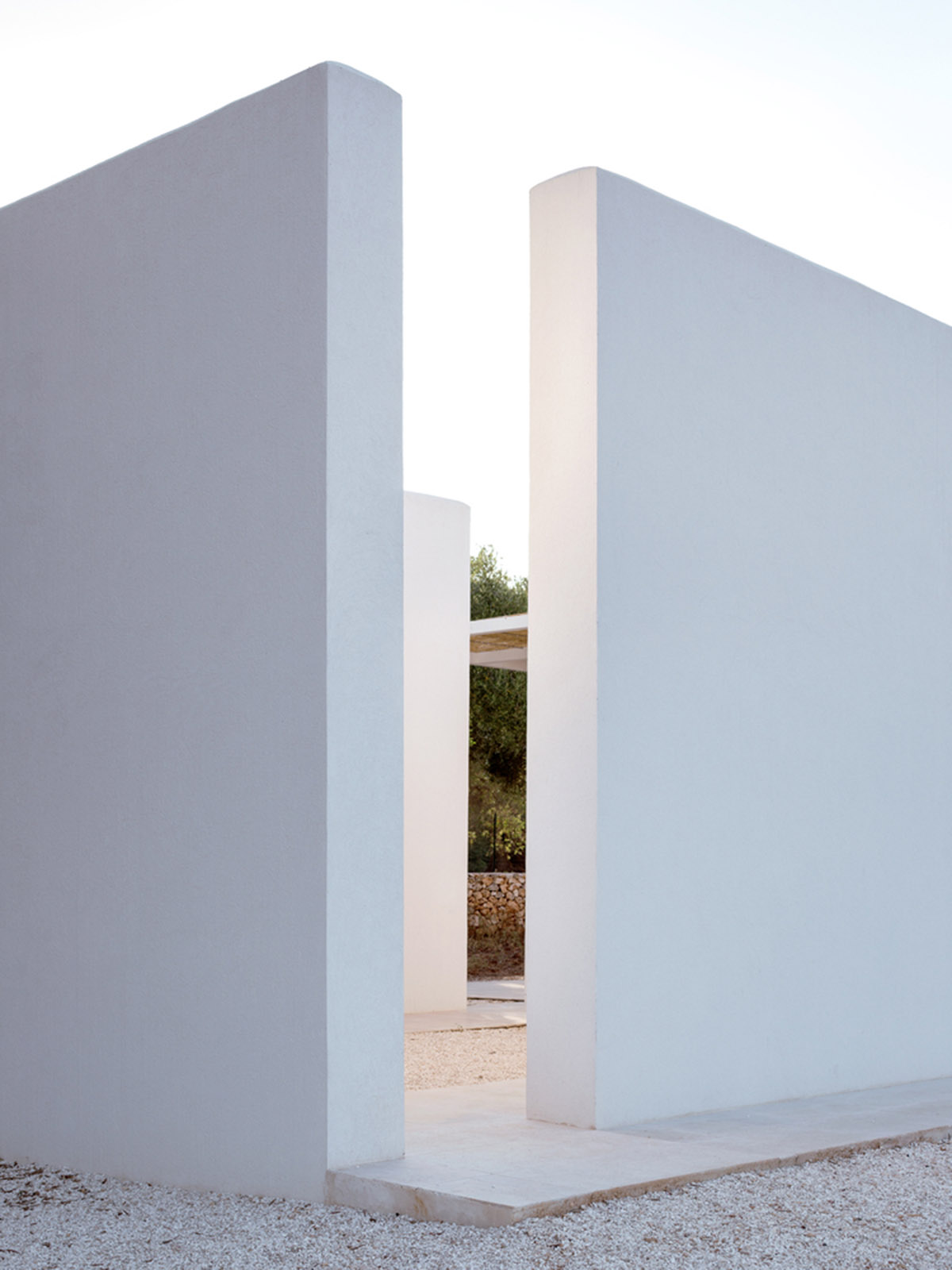 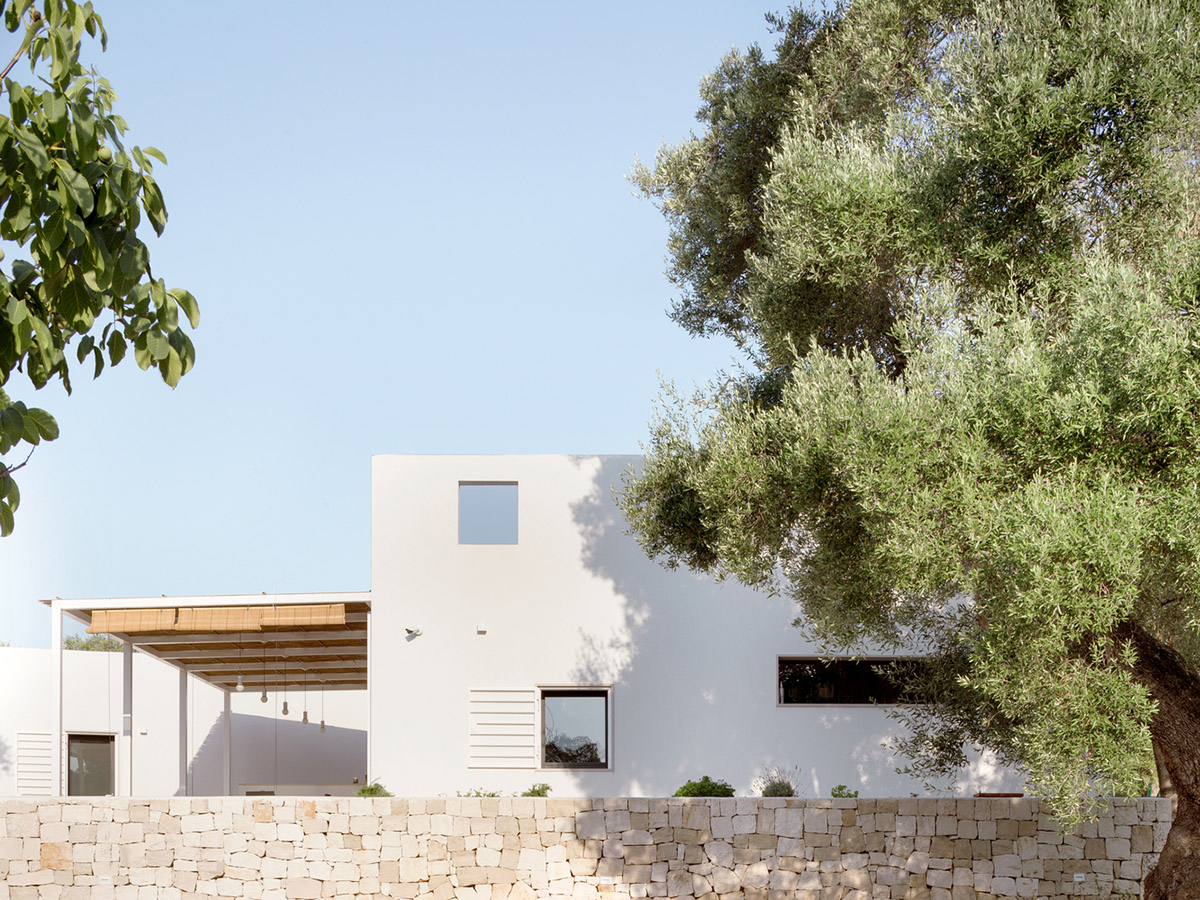 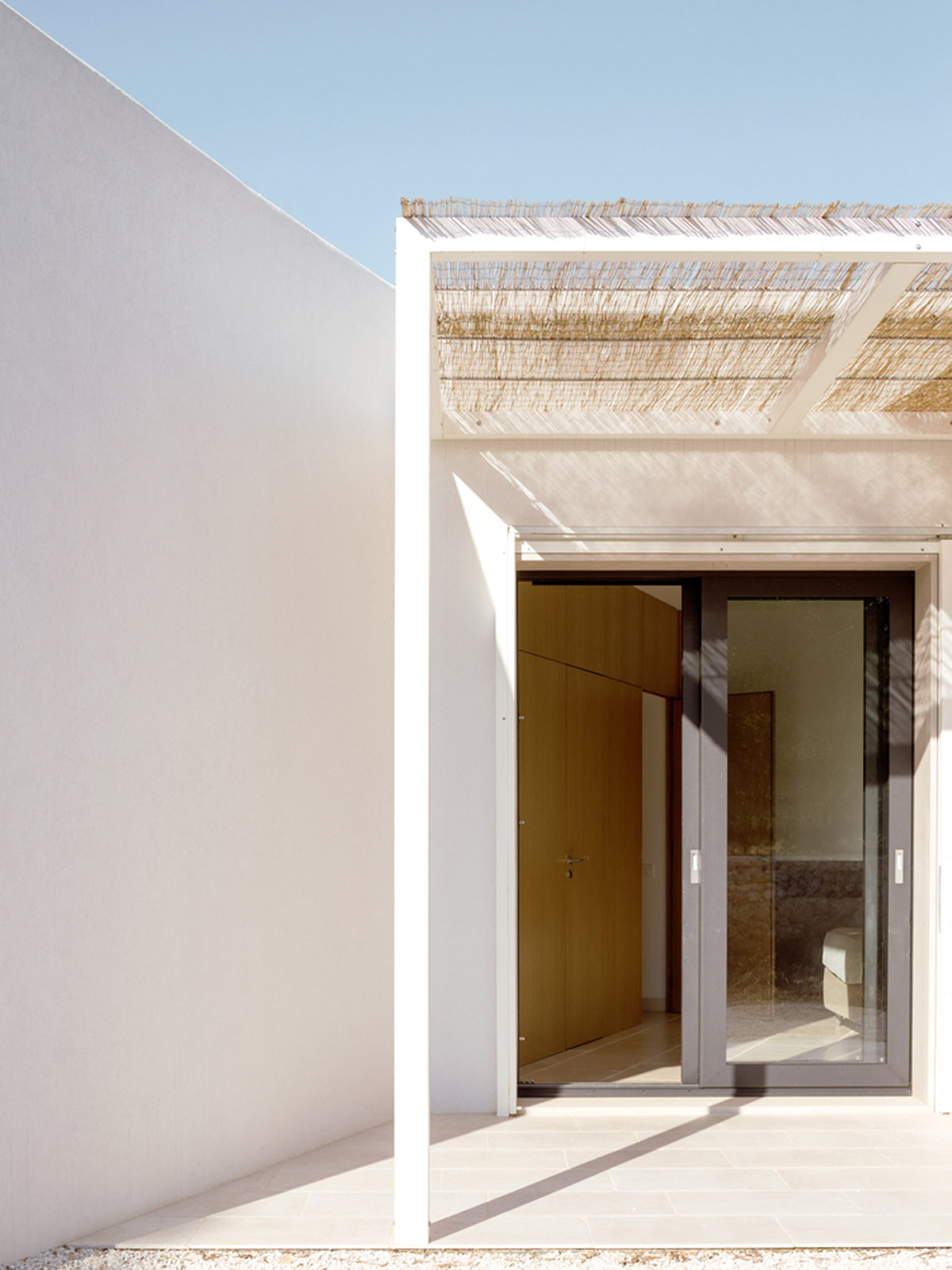 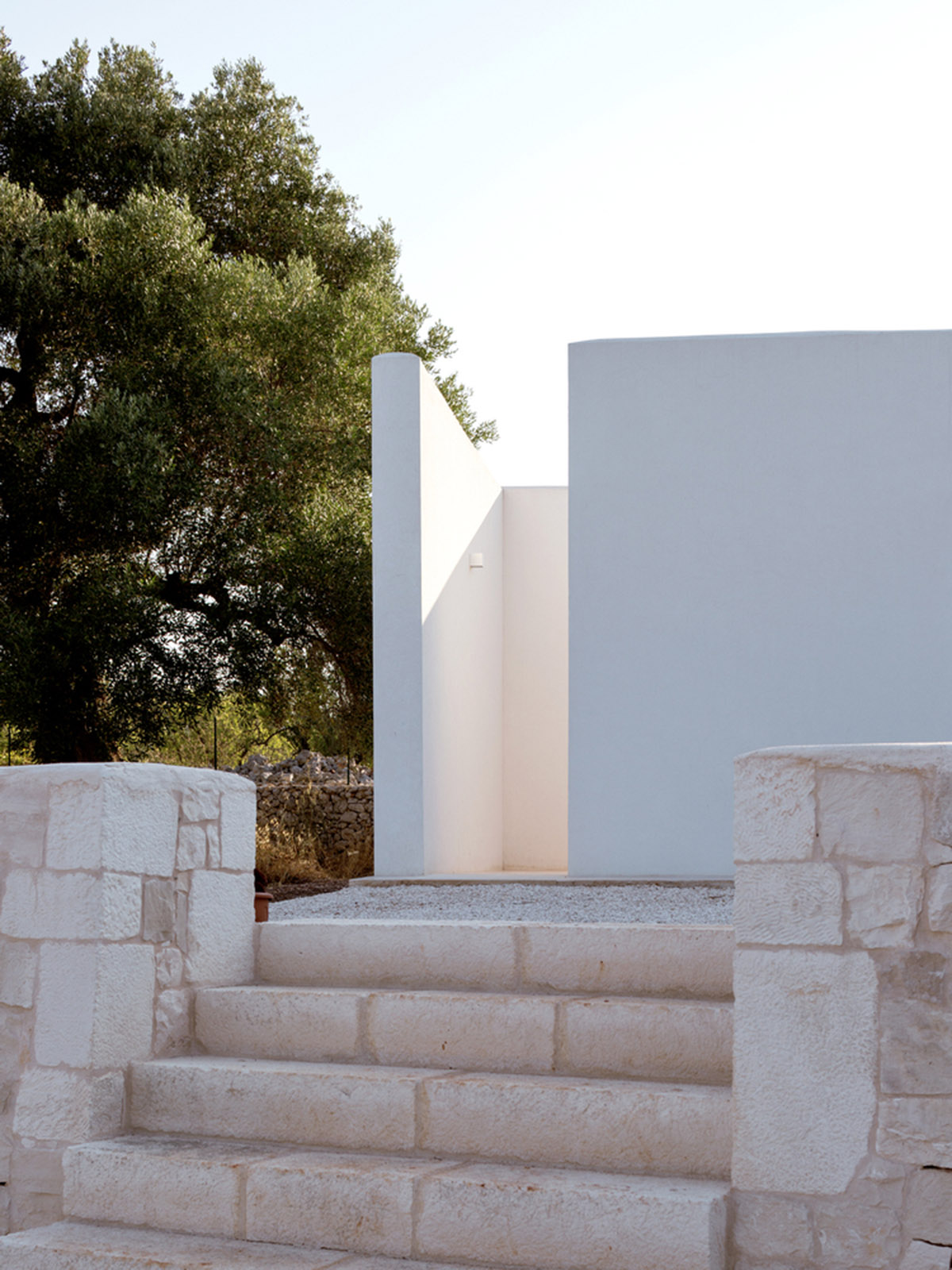 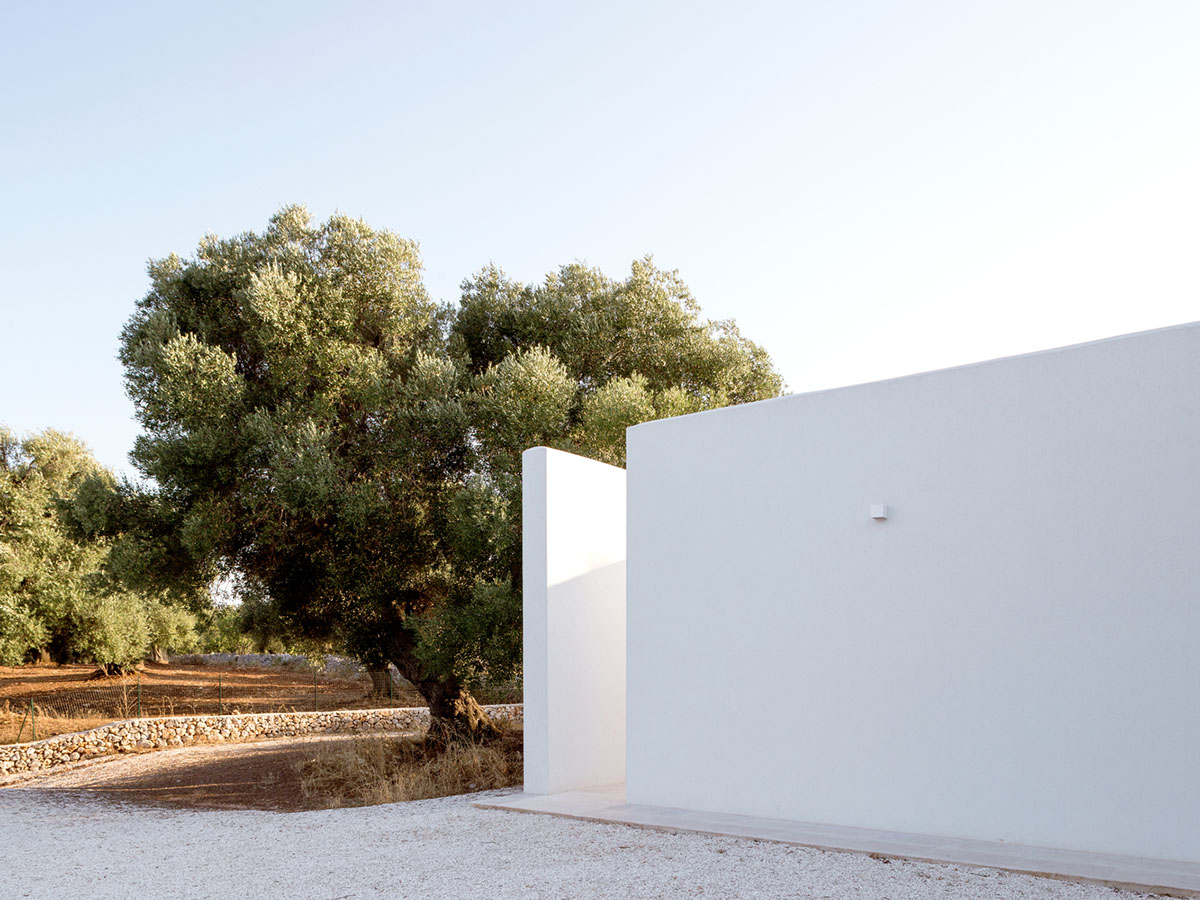 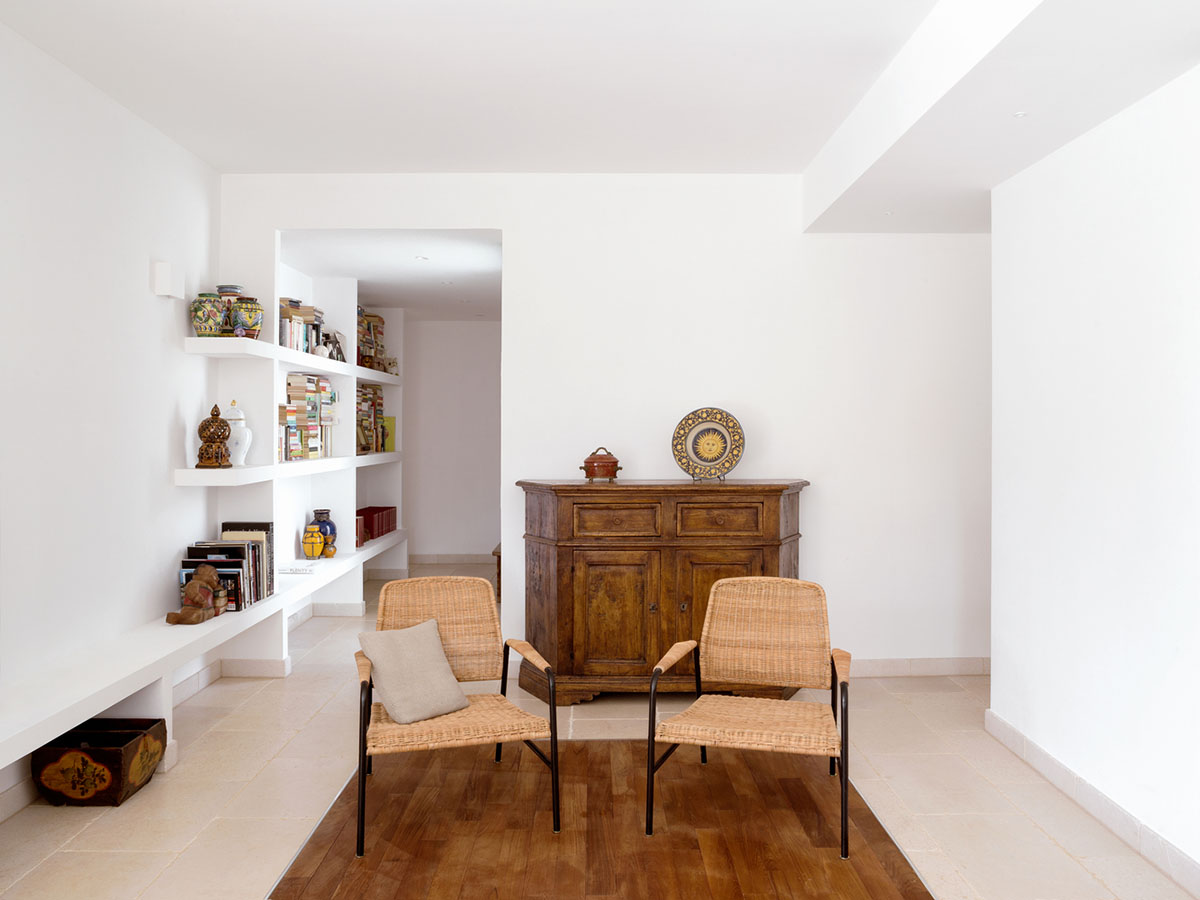 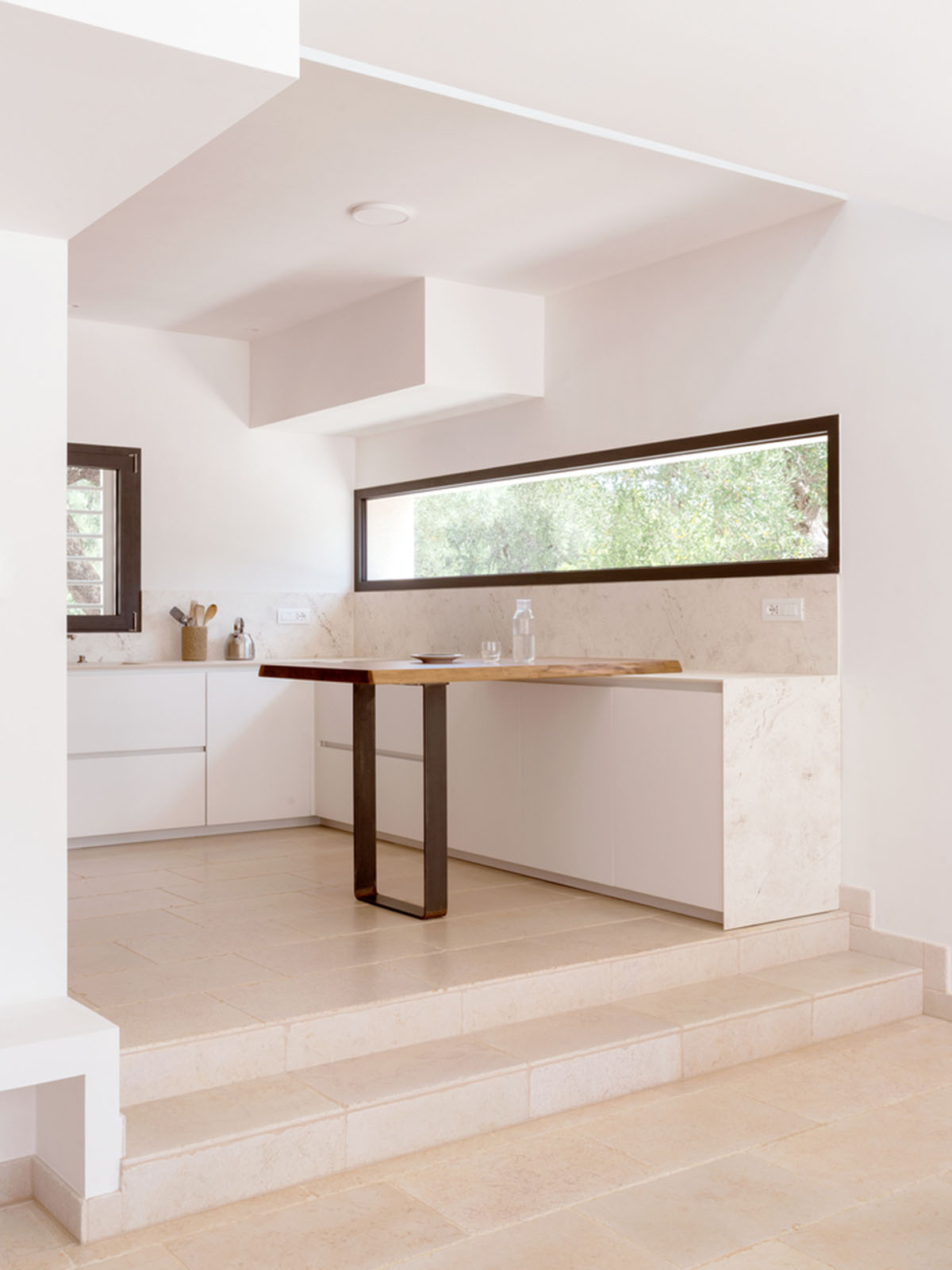 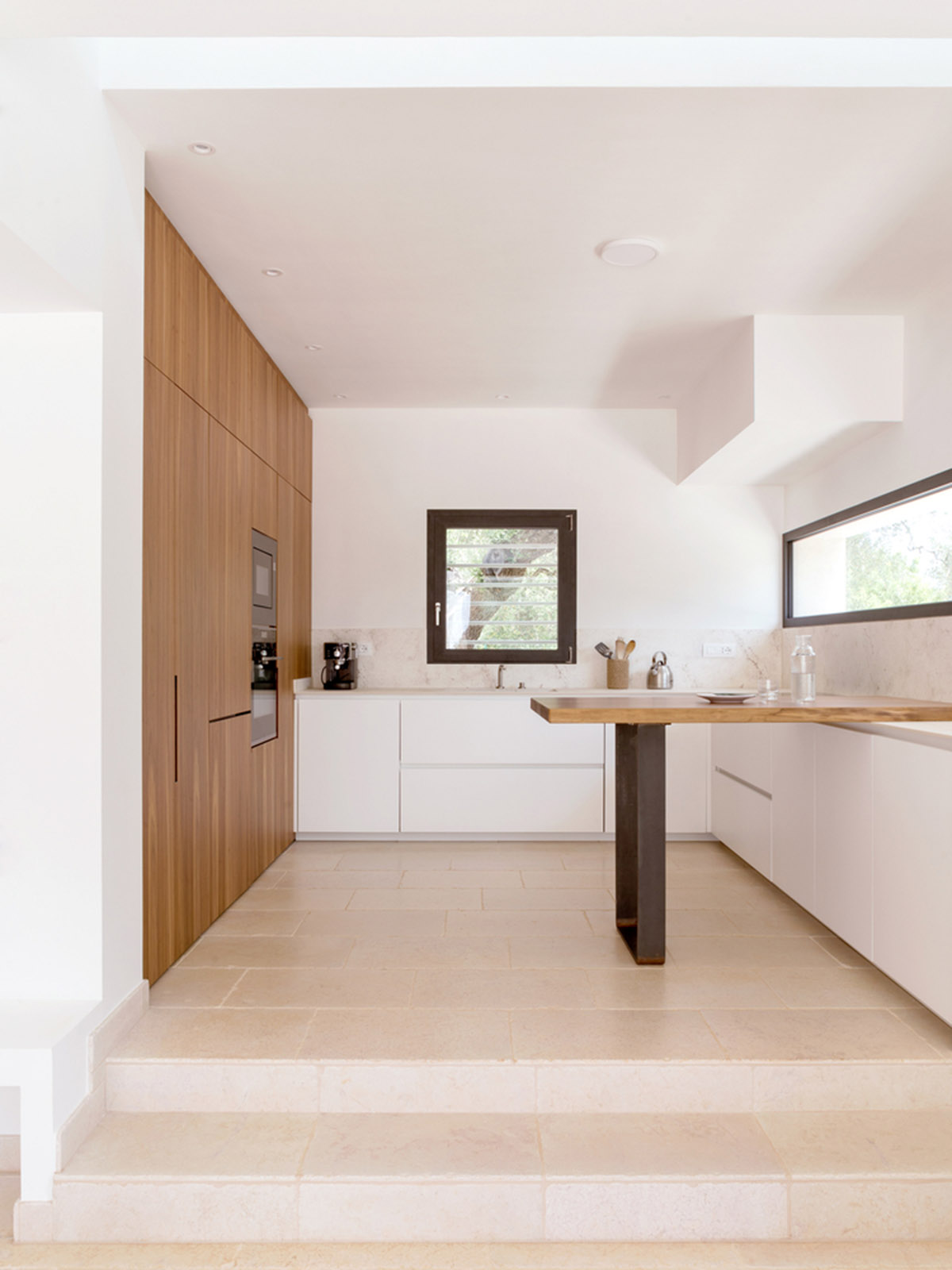 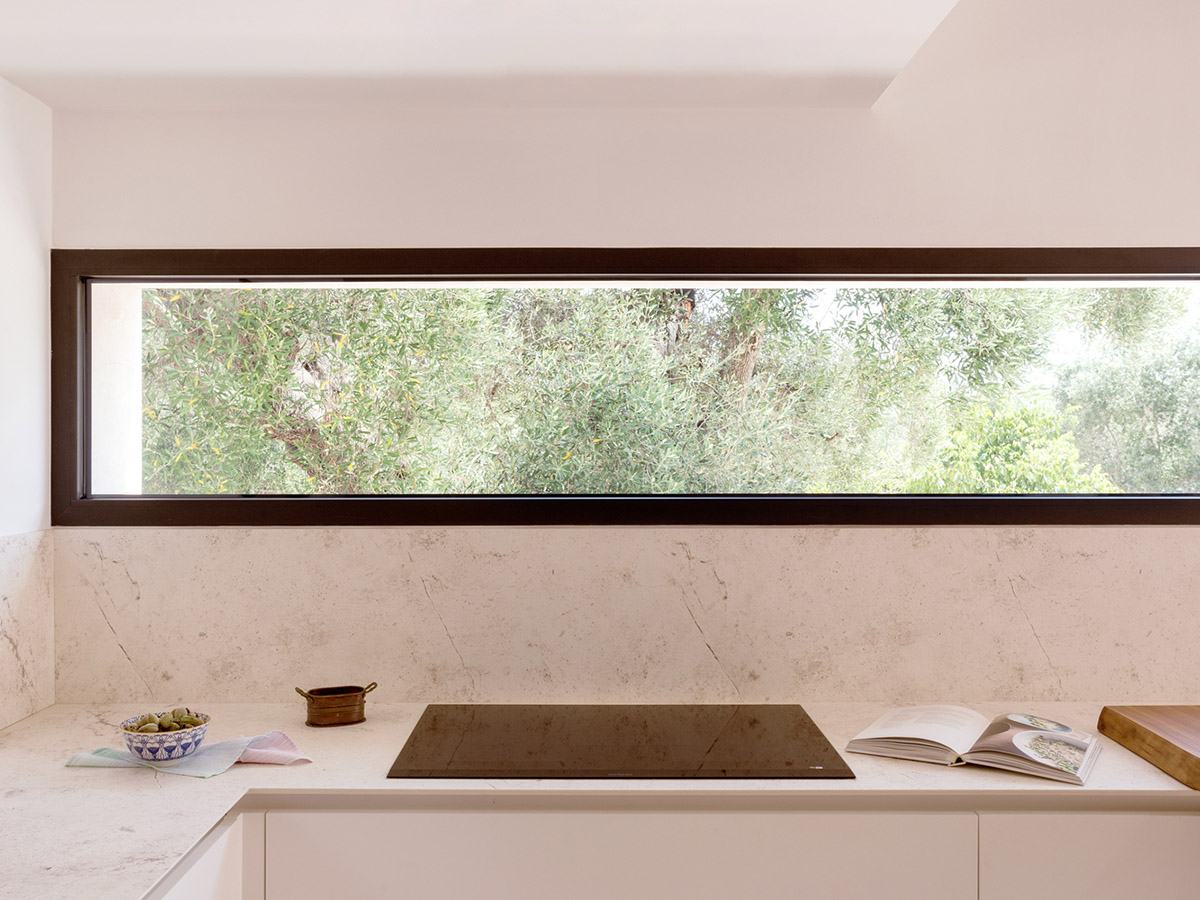 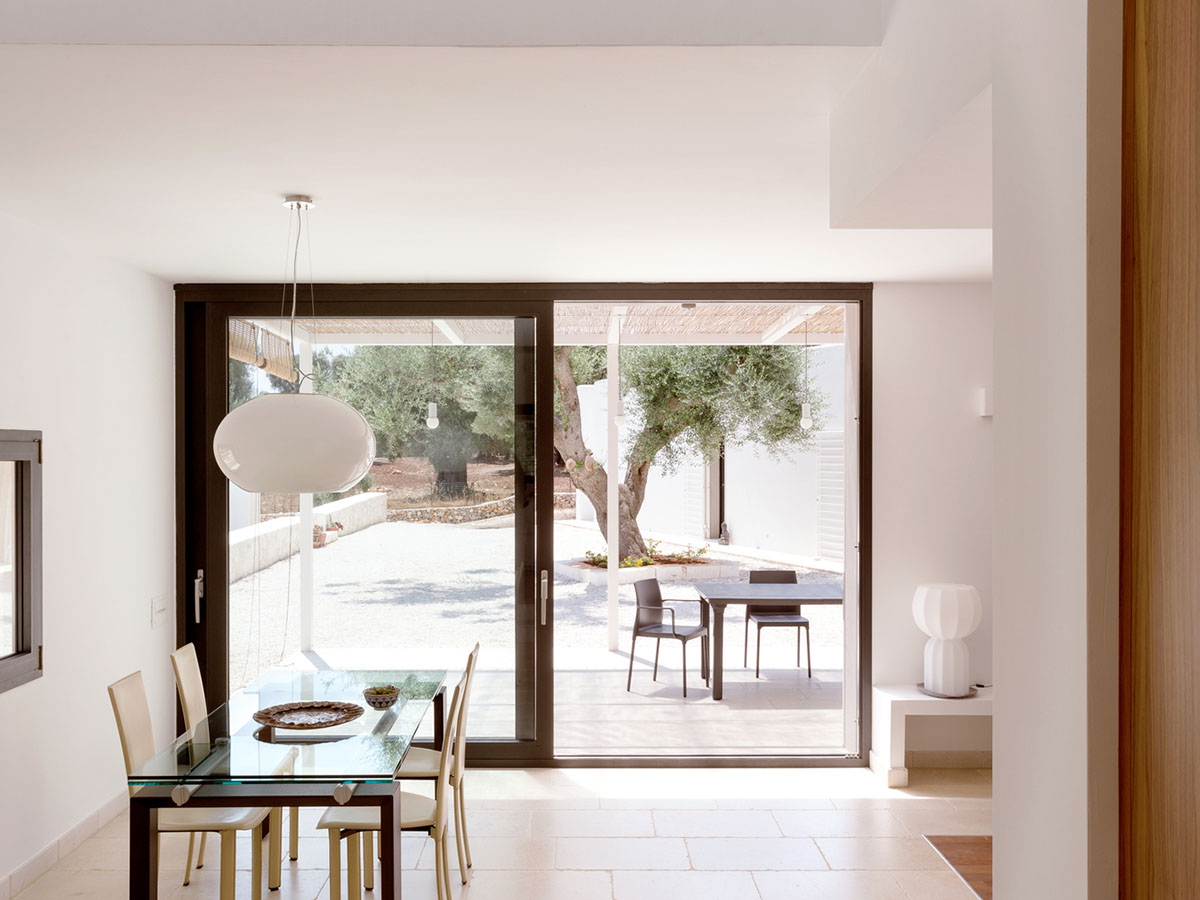 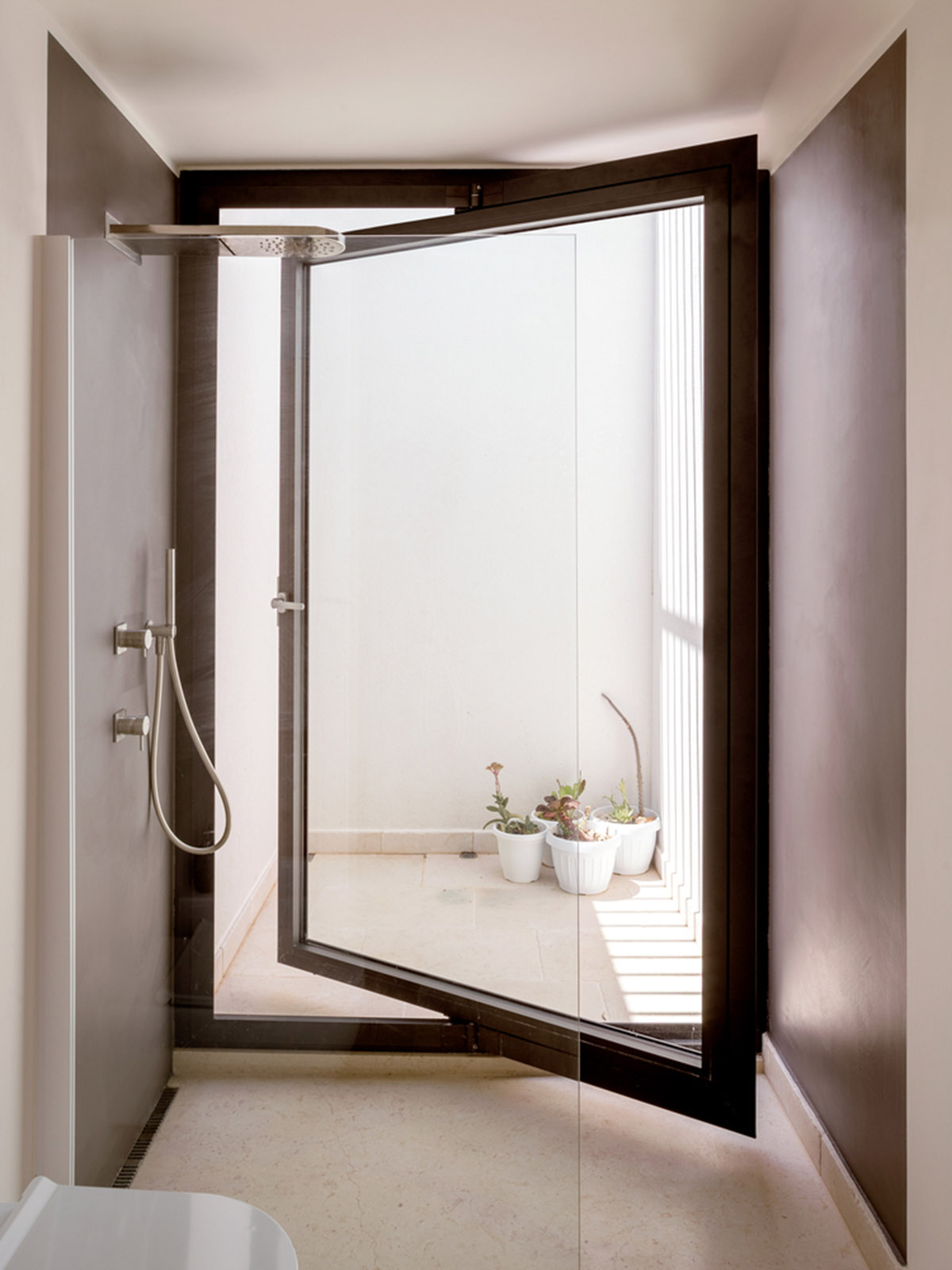 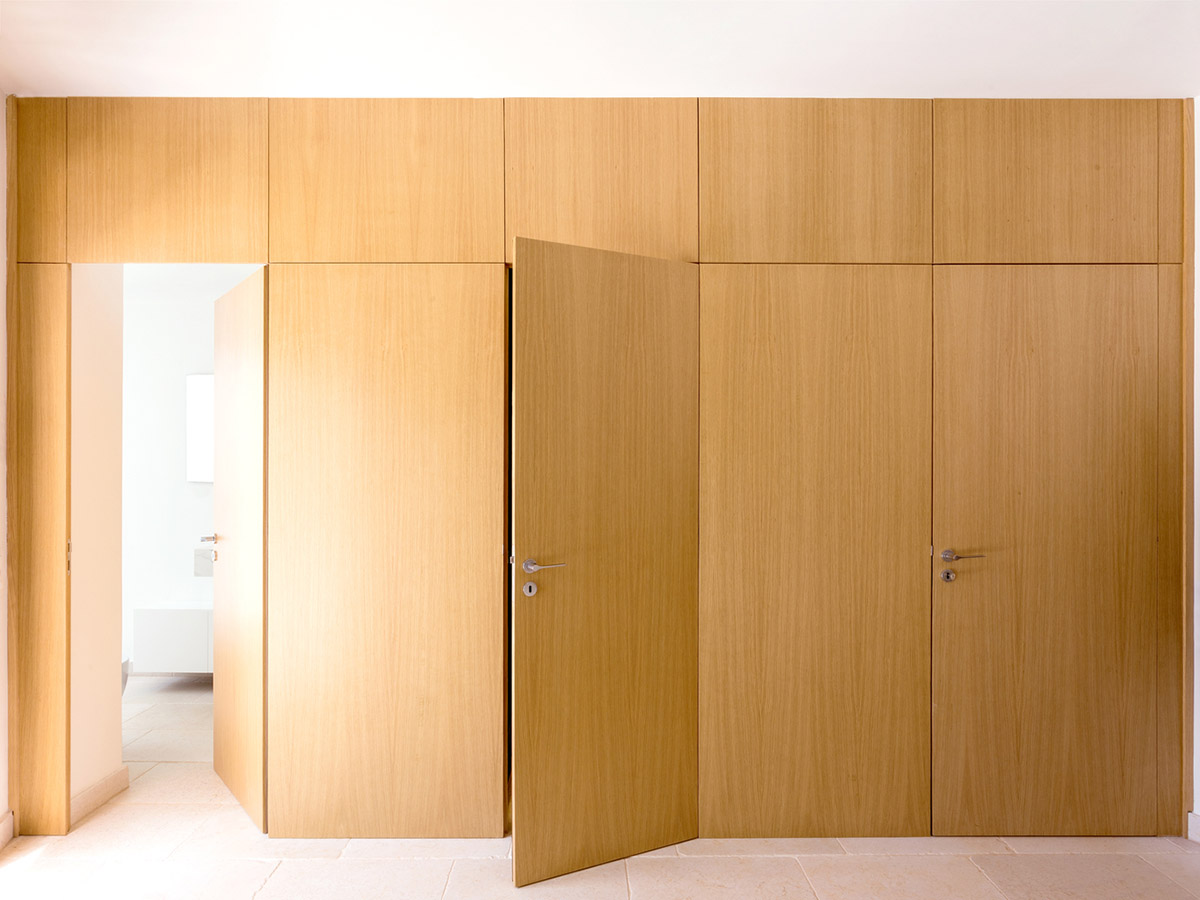 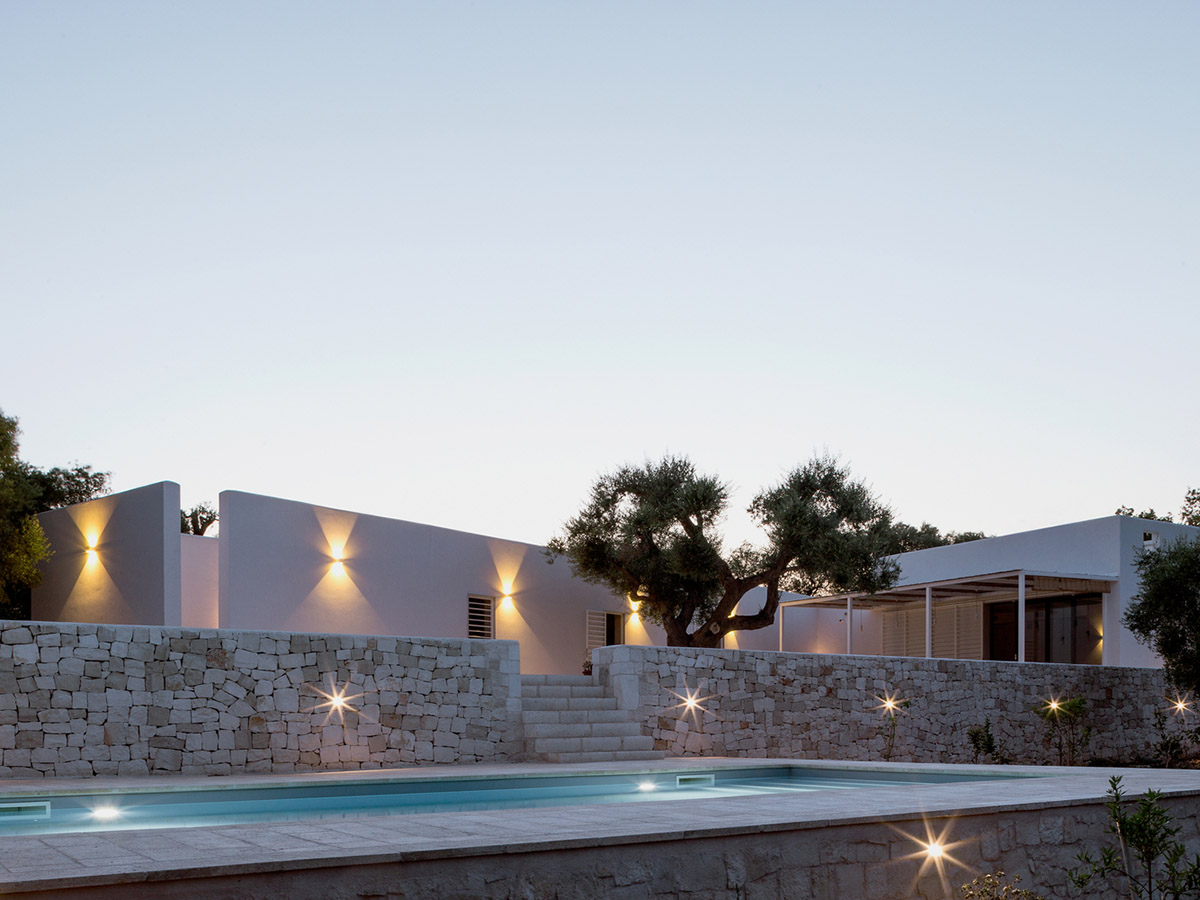 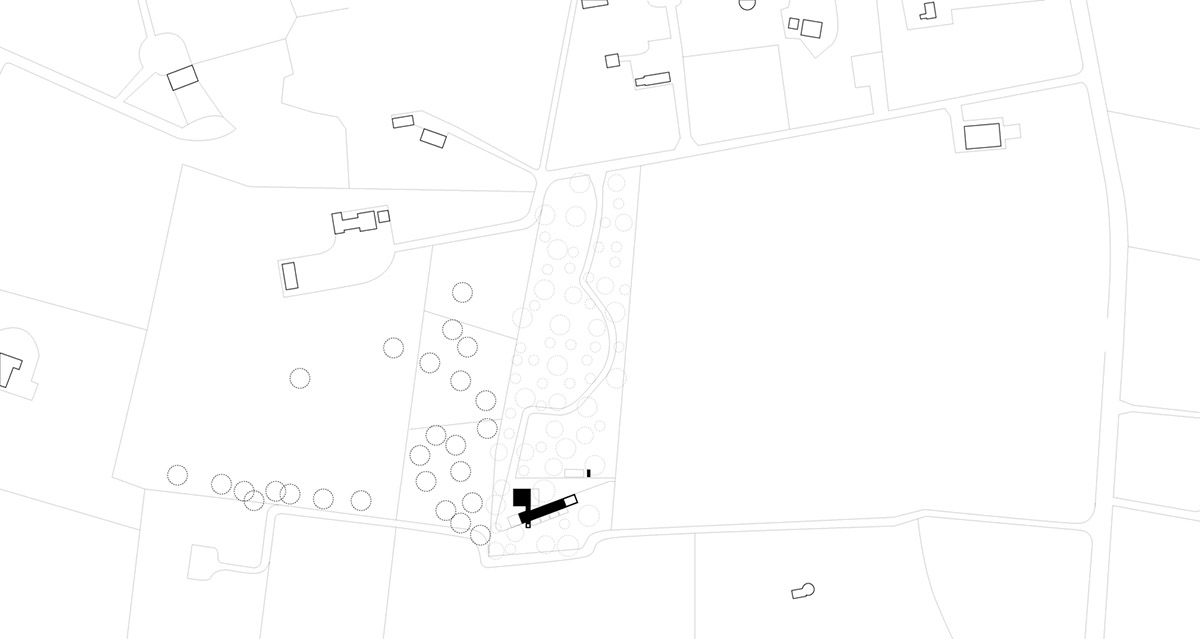 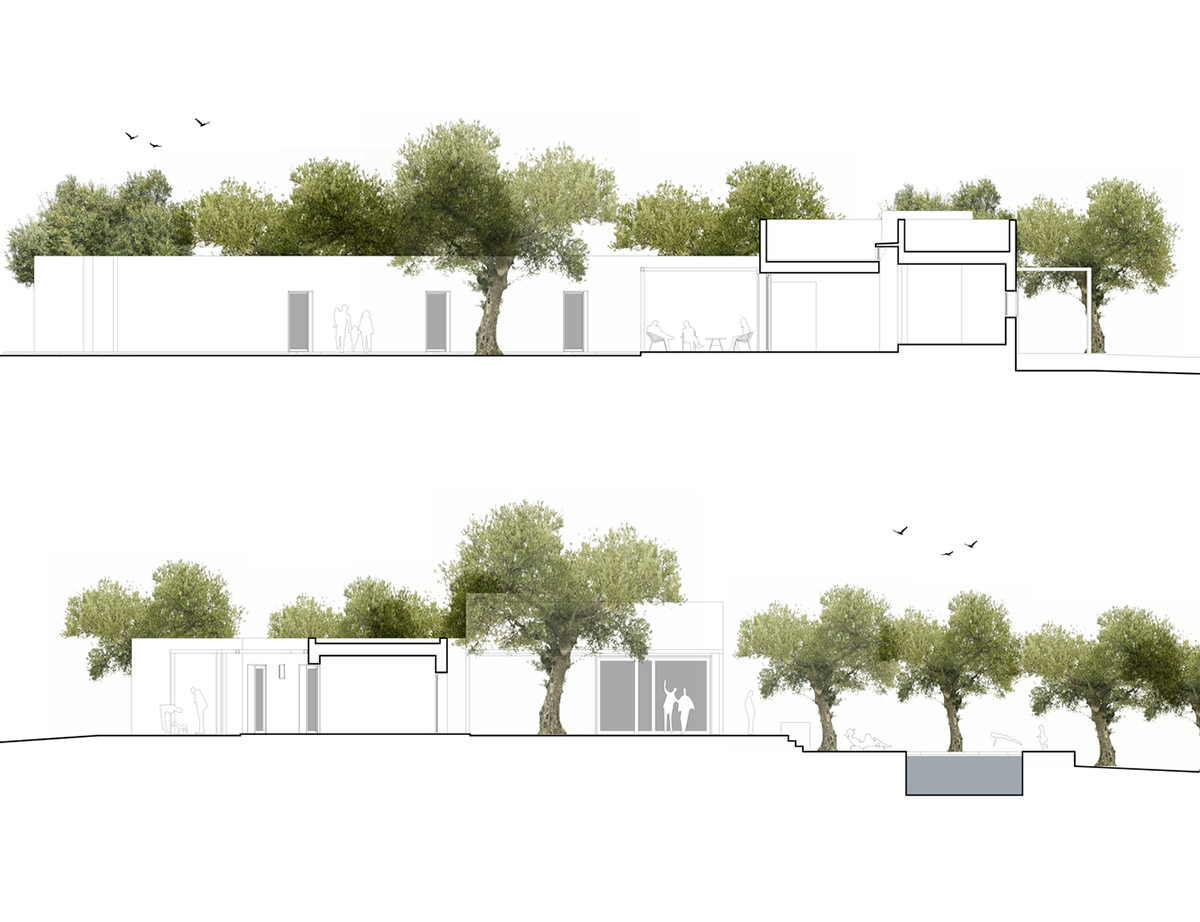 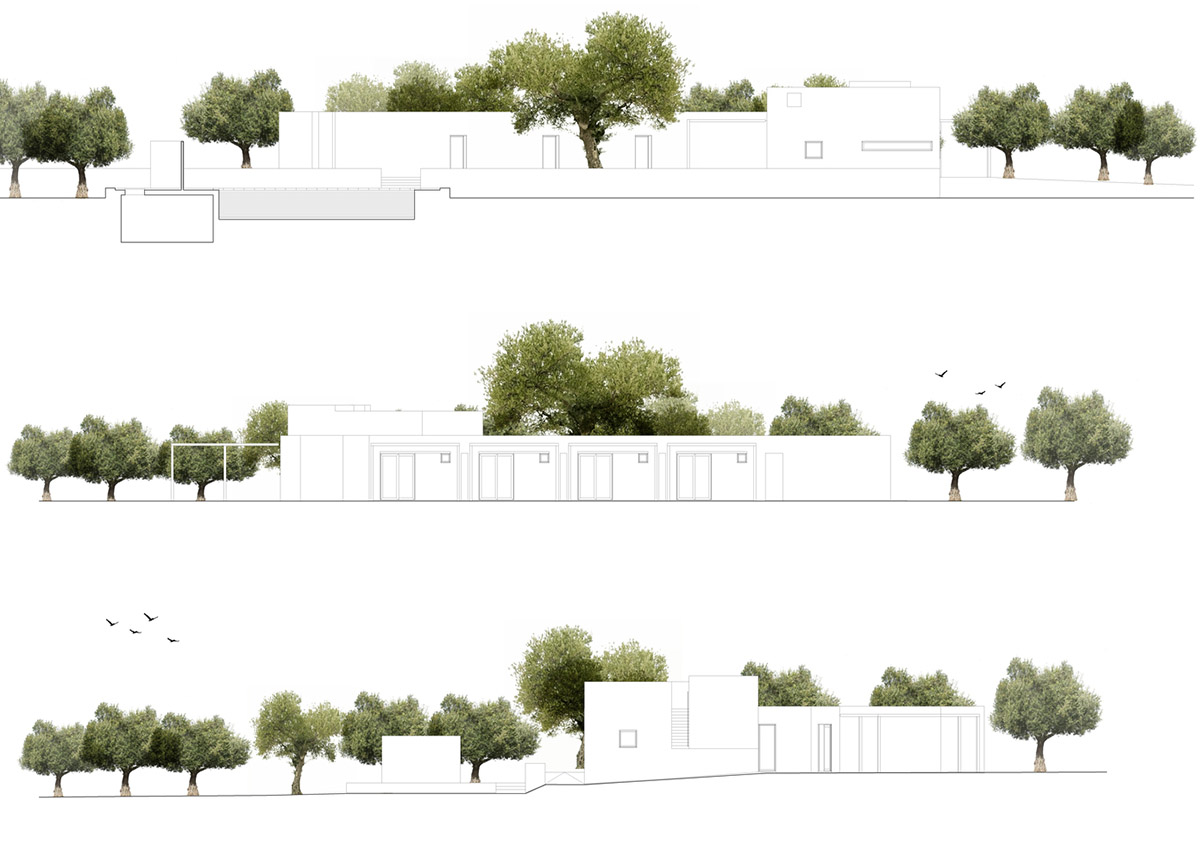