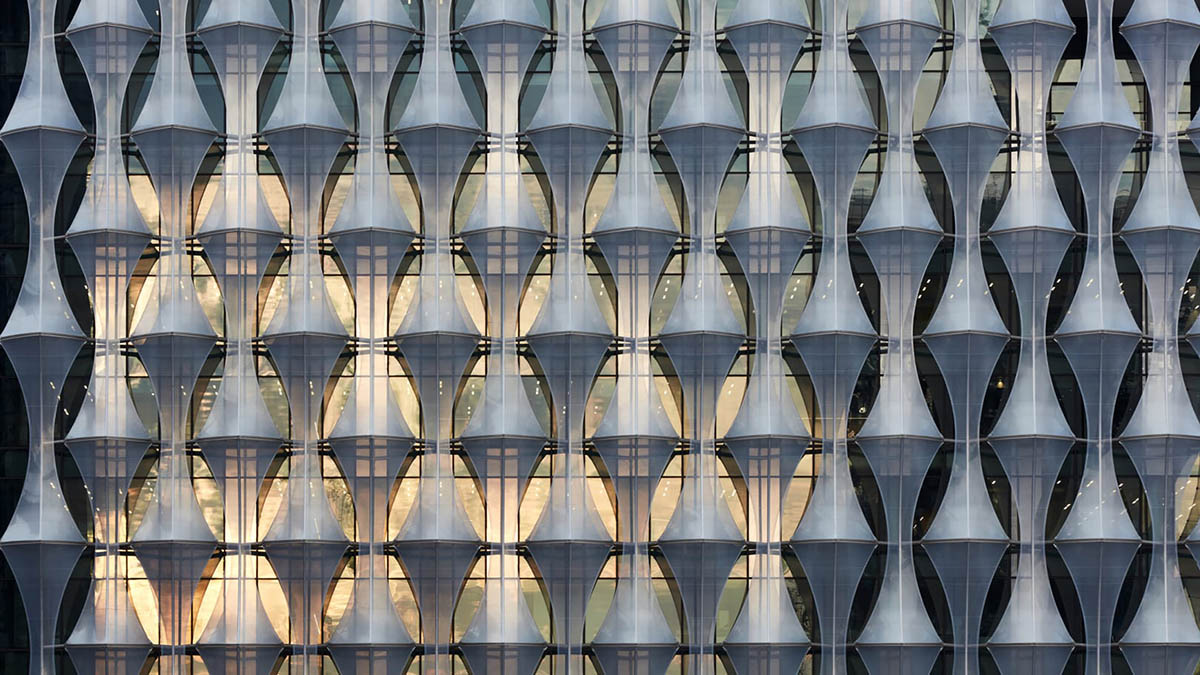 The American Institute of Architects (AIA) has announced the 11 winning projects for its 2022 Architecture Awards.

The 2022 Architecture Award program celebrates the best contemporary architecture and highlights the many ways buildings and spaces can improve lives.

Selected by the nine-member jury, the winning projects "demonstrate design achievement, including a sense of place, purpose, history, and environmental sustainability," as the AIA explained.

See the 11 winning projects with their short descriptions for the AIA 2022 Architecture Awards: 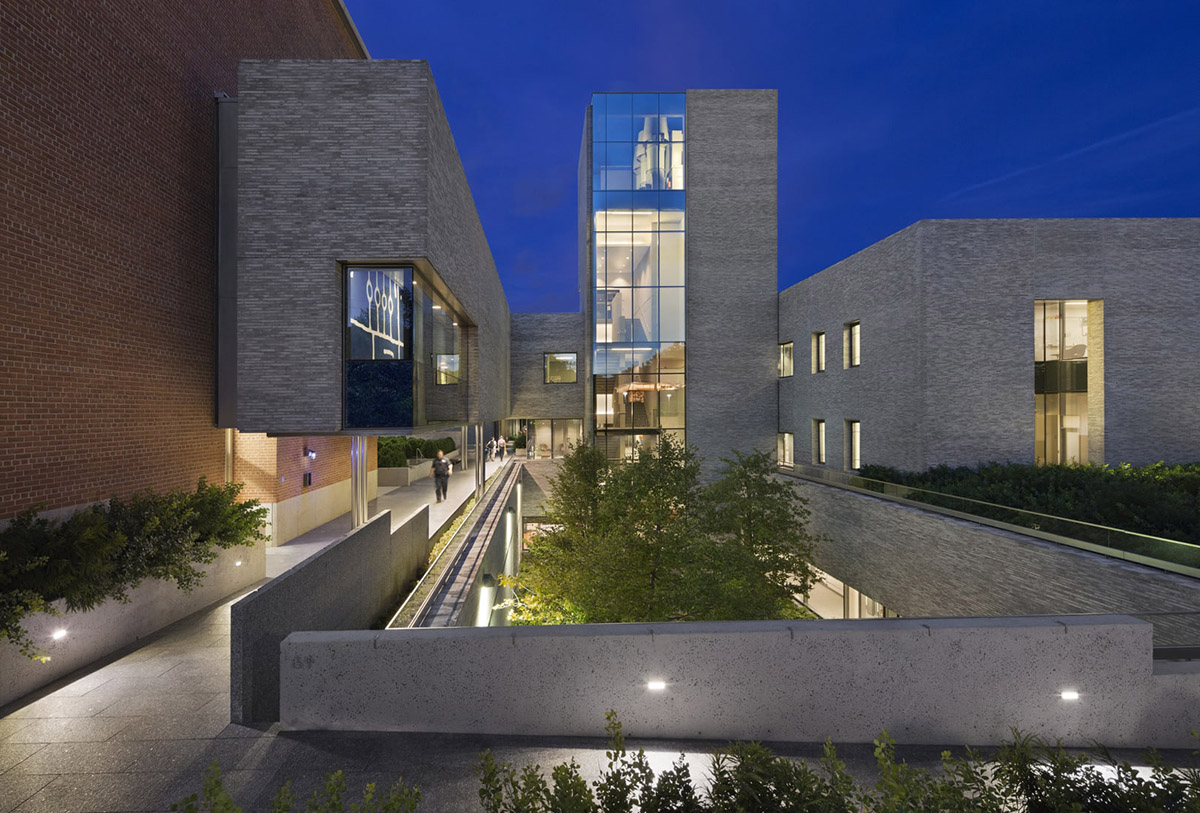 "Princeton University’s Andlinger Center for Energy & the Environment seeks to confront the world’s most pressing environmental issues, and this new building encourages interdisciplinary collaboration that supports new initiatives in energy resilience. Sitting on the northeast corner of Princeton’s campus, this project connects two existing buildings to form a more welcoming identity for the school’s engineering quadrangle.

The new center is bound on two sides by a masonry wall originally designed by McKim, Mead & White in 1911. Now covered in ivy, the wall spurred the concept of entering a garden, and the center interweaves a series of pathways, courtyards, and three three-story buildings into the landscape. The overall design allows the center to encompass a large and sensitive program while still respecting the existing campus vernacular." 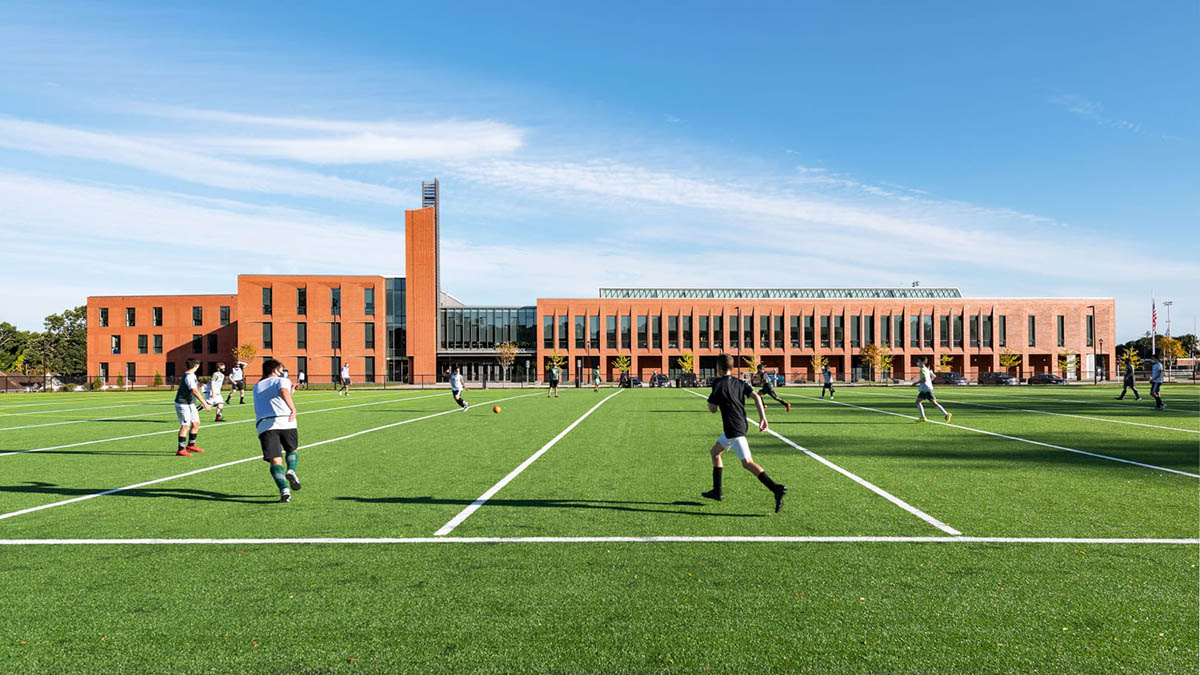 "As Billerica, Massachusetts, has quietly reinvented itself, the town found that its high school, outdated and dysfunctional, did not reflect its newfound vibrancy. This project was envisioned alongside the community, helping it reshape its largest civic building, stadium, and a new identity. At all scales, simple and honest materials are configured in compelling compositions that narrate the community’s story with a vernacular that is both reflective and directive.

The original high school opened in 1955 and received a major addition 20 years later. As it aged, the building presented numerous challenges to staff and faculty who were faced with spaces that were undersized or underused. Together, they hindered effective monitoring and prompted safety concerns. Misaligned floor plates between the original structure and the addition and inadequate door clearances affected students with mobility impairments. As the student body’s academic and extracurricular program accolades grew, the community deserved a new school more reflective of its commitment to excellence." 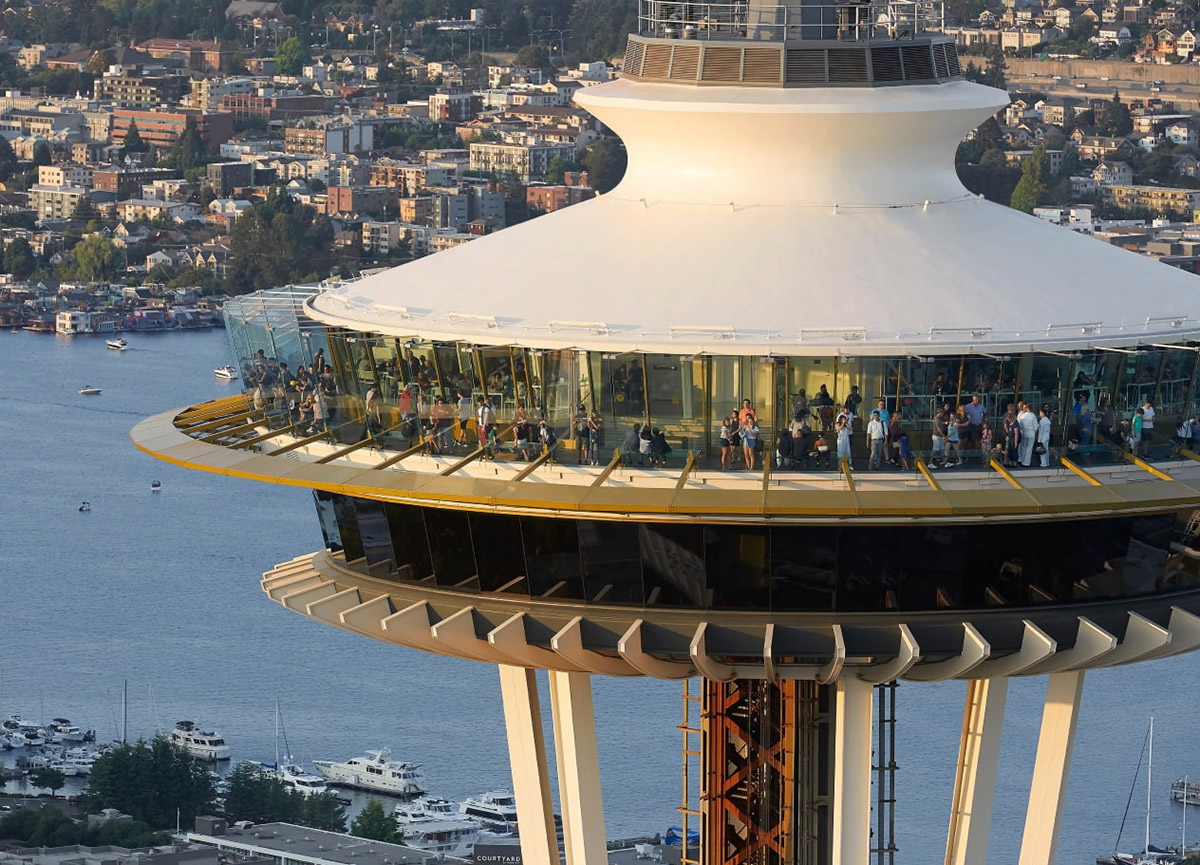 The Century Project at the Space Needle, Seattle by Olson Kundig

"An international icon of the Pacific Northwest and one of the world’s most photographed buildings, Seattle’s Space Needle has long heralded the future with a palpable sense of optimism. Launched in the building’s 55th year, the Century Project is a significant redesign focused on providing a new visitor experience that ensures the building remains a source of inspiration for the next 50 years.

The Space Needle opened to the public in 1962 when Seattle hosted the World’s Fair. At that moment, the building reflected the city’s forward-thinking mentality, a legacy that endures today. Because of the impressive views and thrilling experience of vertigo it offers, the Space Needle attracted more than 60 million worldwide visitors during its first 50 years of operation." 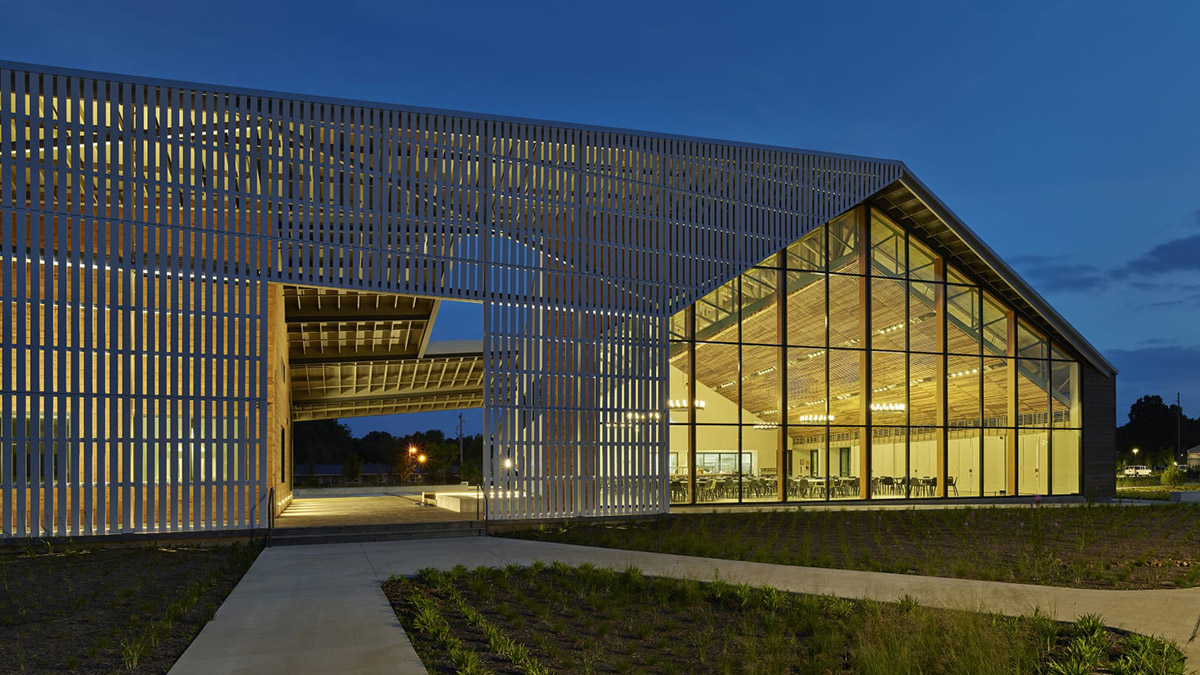 "In Bentonville, Arkansas, the Thaden School has emerged as a new high school that challenges traditional educational paradigms by letting young people learn by doing. The school’s pedagogy hinges on three central programs focused on narrative and visual communication, physics and mechanics, and the intersection of biology, chemistry, and community pertaining to the growing and preparation of food. The Home Building, informed by a comprehensive master plan developed by the design team, is a critical link for the school’s ambitions and houses its food-based program.

The master plan envisioned a series of makerspaces that correspond with the school’s three distinct programs, charmingly named reels, wheels, and meals. The design process included gathering more than 30 school leaders, the team, and a dozen community organizations. The conversations that flowed from those meetings informed the Home Building, which allows the meals program to subvert existing notions of food consumption and production in its contemporary teaching kitchen." 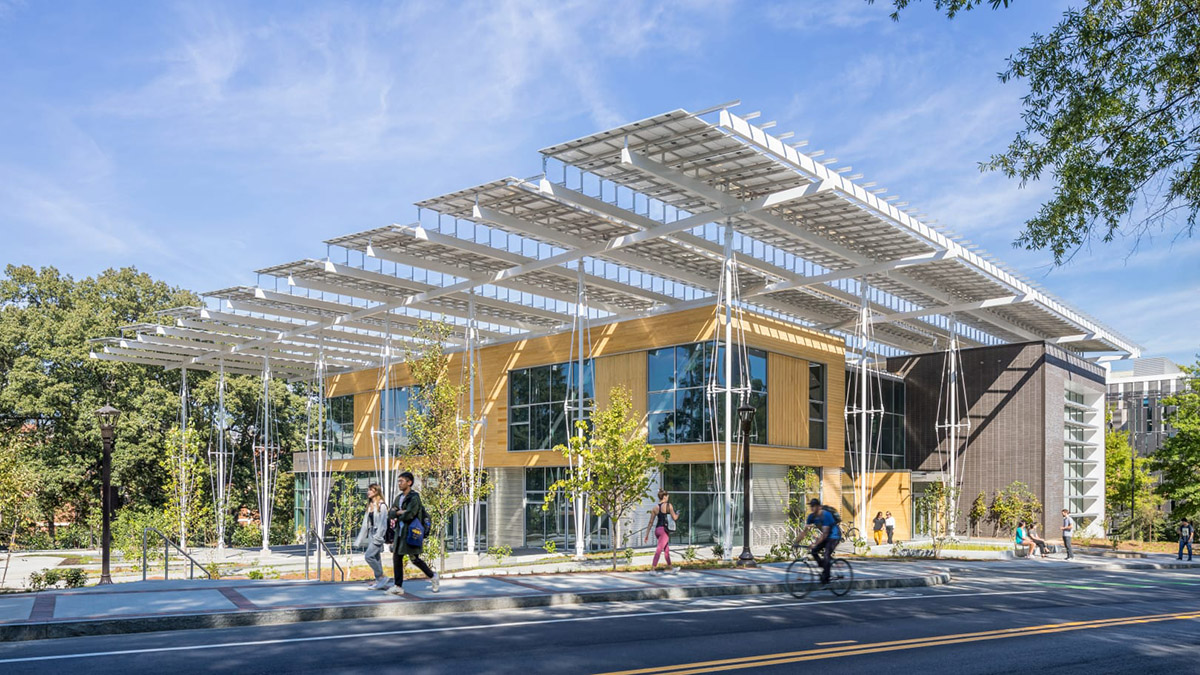 "As the first fully certified living building in the Southeast United States, the Kendeda Building for Innovative Sustainable Design sets a bar for sustainability, proving that buildings in challenging climates can achieve regenerative design. Located just outside of Atlanta’s heart on Georgia Tech’s campus, the project originated with Diana Blank, the founder of the Kendeda Fund, who dreamed of a healthier city.

The Kendeda Fund, a longtime supporter of the Living Building Challenge’s mission, needed a willing partner for its building. That search led them to Georgia Tech and an ambitious journey that began with a $30 million grant in 2015. Both organizations agreed that the project's primary outcome would be a positive transformation of the design, engineering, and construction industry." 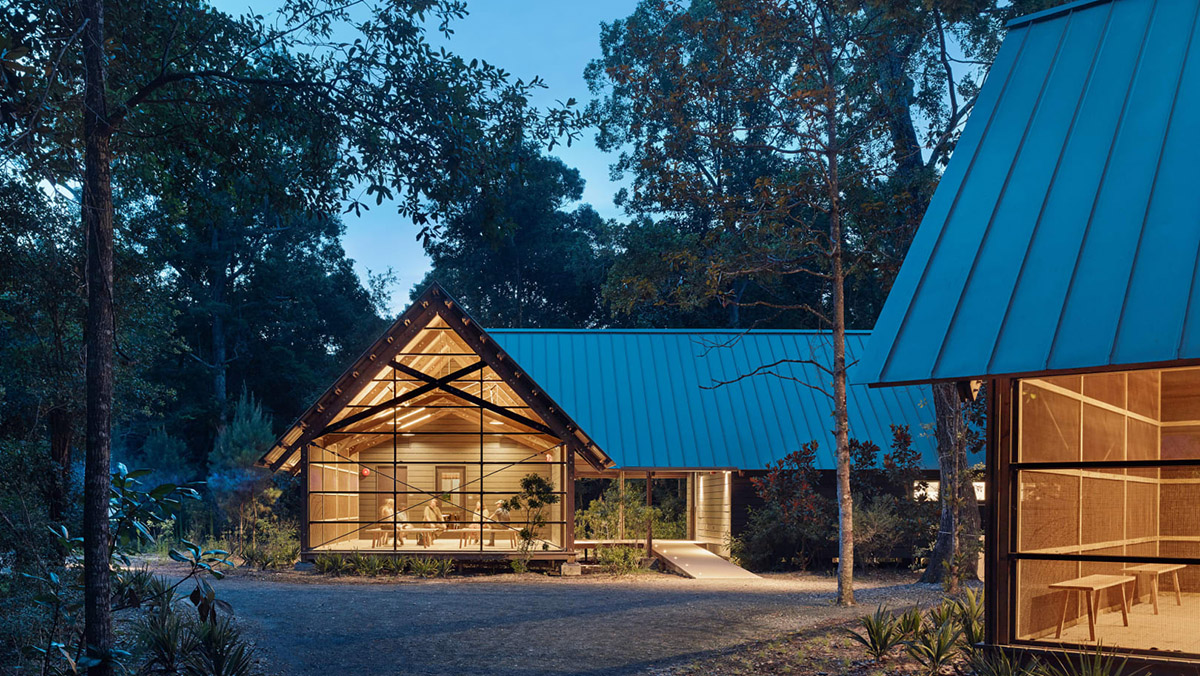 Marine Education Center at the University of Southern Mississippi, Ocean Springs, Mississippi by Lake|Flato Architects in collaboration with Unabridged Architecture

"When presented with this project, the design team heeded the words of Chris Snyder, the former director of the Marine Education Center at University of Southern Mississippi, who said, “all buildings eventually end up in the ocean.” Those words rang especially true for this project: A former iteration of the facility was destroyed by Hurricane Katrina in 2005, and two other storms impacted the site of this new facility during schematic design and construction. It was clear to the team that the new facility, which offers education and outreach programming in the city of Ocean Springs, would need to be resilient, sustainable, and durable.

The center supports a career-based working environment that relies on a blend of formal, informal, and free-choice thinking and higher education strategies that focus on the north-central Gulf of Mexico’s coastal ecosystems. Promoting careers in marine sciences and fostering community involvement, the center’s campus is a place to study and research environmental education and coastal resilience. The center’s Citizens Science Library is open to the public, and it also serves as a venue for community organizations with parallel missions." 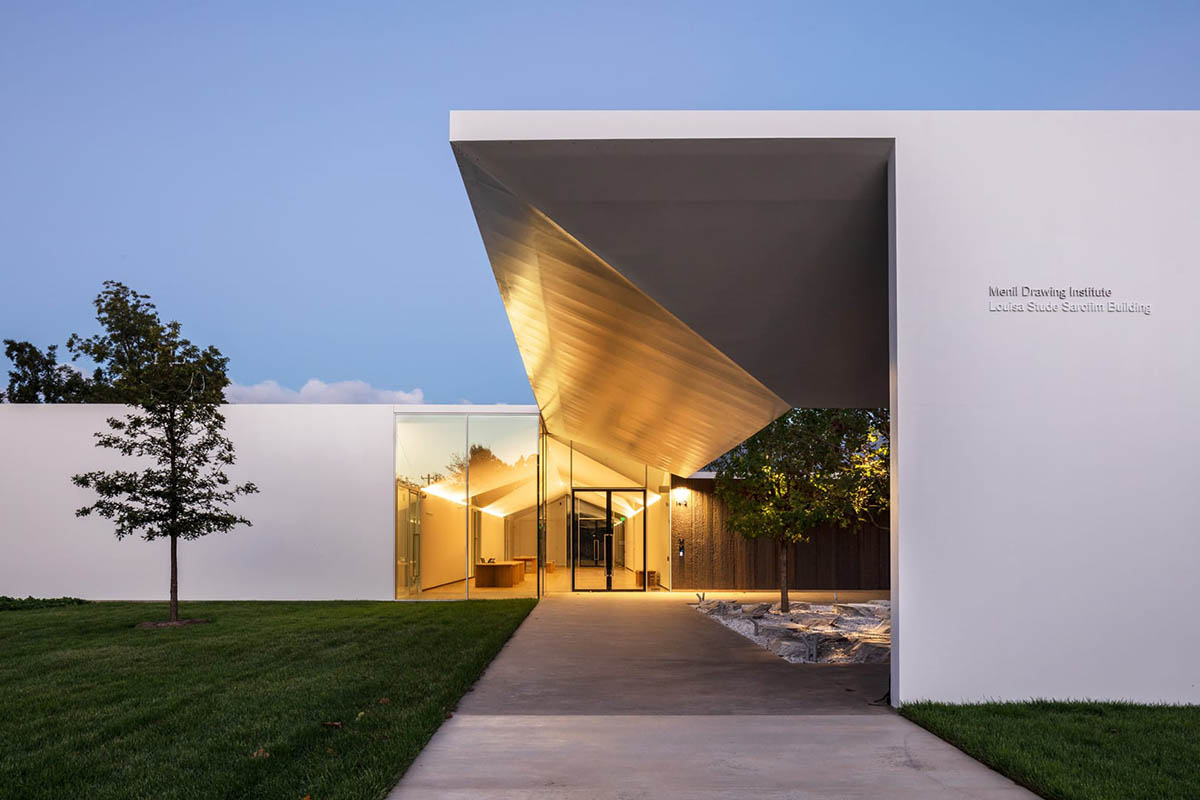 "The Menil Drawing Institute in Houston, Texas, is the country’s first freestanding building dedicated solely to the exhibition, study, and conservation of works on paper. The institute sits within the Menil Collection’s 30-acre campus and honors the intimacy and direct engagement with art that defines the overarching campus mission. Surrounded by a park-like setting, the institute’s elongated profile melds with the historic campus’ architecture while heralding a new paradigm for this neighborhood of art.

The institute is defined by a series of volumes and courtyards that are unified by a white steel-plate roof that hovers above the landscape, much like a folded sheet of paper. Two entry courtyards await visitors and act as thresholds between the institute’s indoor and outdoor spaces. Within these courtyards, the roof’s folds embrace the tree canopy to support a shaded and contemplative air that permeates the institute. Additionally, the roof acts as a reflective surface for the trees’ shadows, contrasting with the cladding’s grey cedar planks." 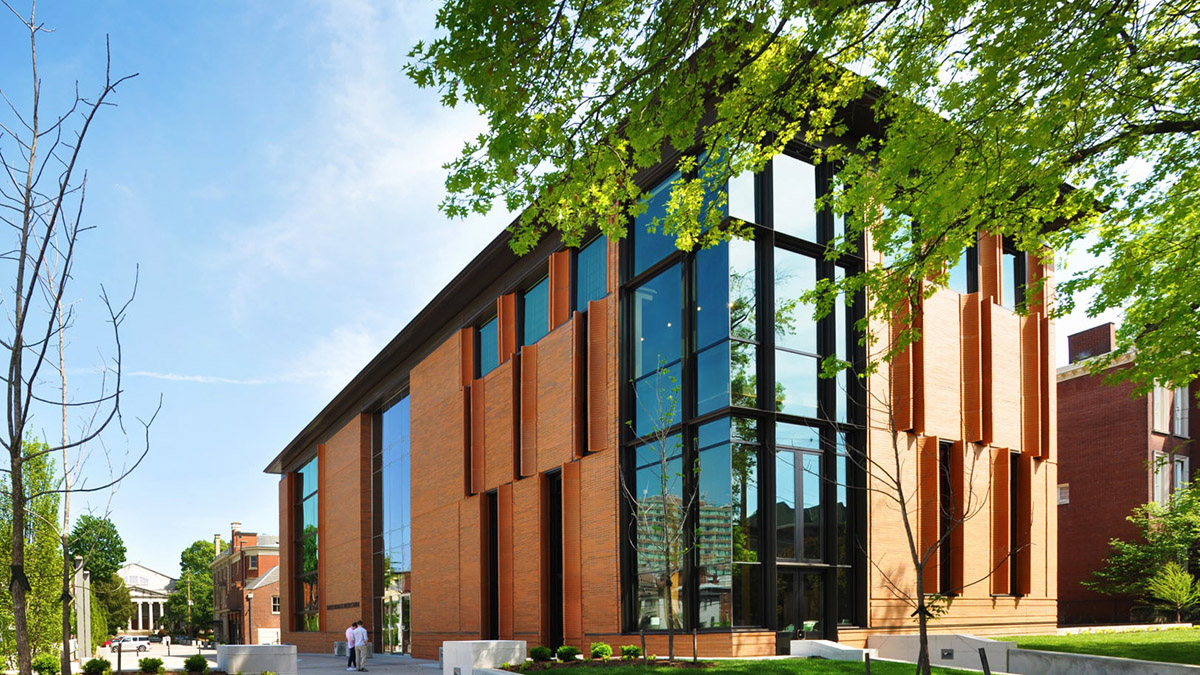 "In Louisville, Kentucky, the Filson Historical Society endeavors to share the rich history of the state and the wider Ohio River Valley through its educational programs and cultural resources. The society’s new headquarters contrasts with the Beaux-Arts style residence it originally called home while still retaining a tangible link to the historic structure. Expanding the overall campus, the new Owsley Brown II History Center also helps dispel the notion that the society is a private, exclusive club rather than a vital cultural resource for the community.

The society was originally housed in the Ferguson Mansion in Old Louisville, one of the city’s historic neighborhoods developed in the early 1900s following the Southern Exposition. The society had outgrown the mansion and envisioned a new campus that spurred greater community engagement, expanded its research amenities and storage capacity, and refreshed its image as an inviting organization." 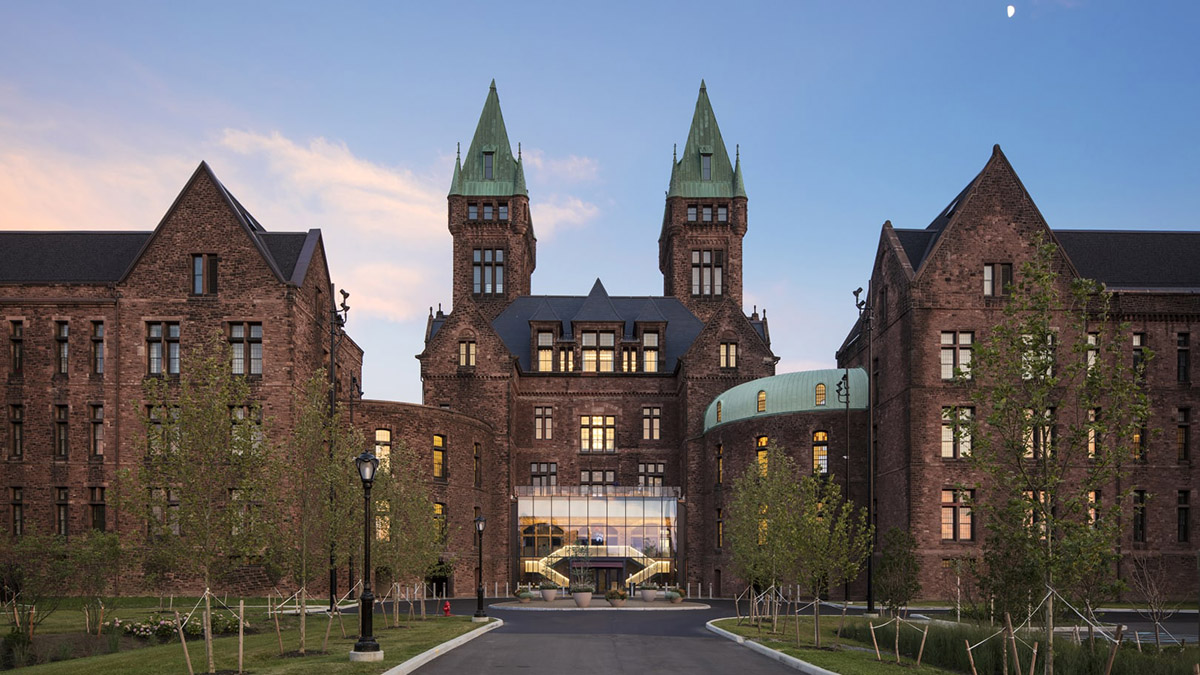 "This project radically transformed the central portion of Buffalo’s National Historic Landmark Richardson Olmsted Campus into a boutique hotel. Celebrating both the monumental structure originally designed by Henry Hobson Richardson and the surrounding landscape designed by Frederick Law Olmsted, the revitalized building brings new life to an abandoned architectural masterpiece. What was once the Buffalo Asylum for the Insane now stands ready to welcome travelers and visitors while contributing to the city’s revitalization and position as a center for great American design.

The campus is one of the most important buildings and landscapes in Buffalo, a city that boasts a rich architectural heritage. Its abandonment, which lasted decades, ran parallel to the city’s decline due to deindustrialization and population loss. The foreboding state of the derelict building also had the unfortunate side effect of reflecting the stigma of mental health facilities." 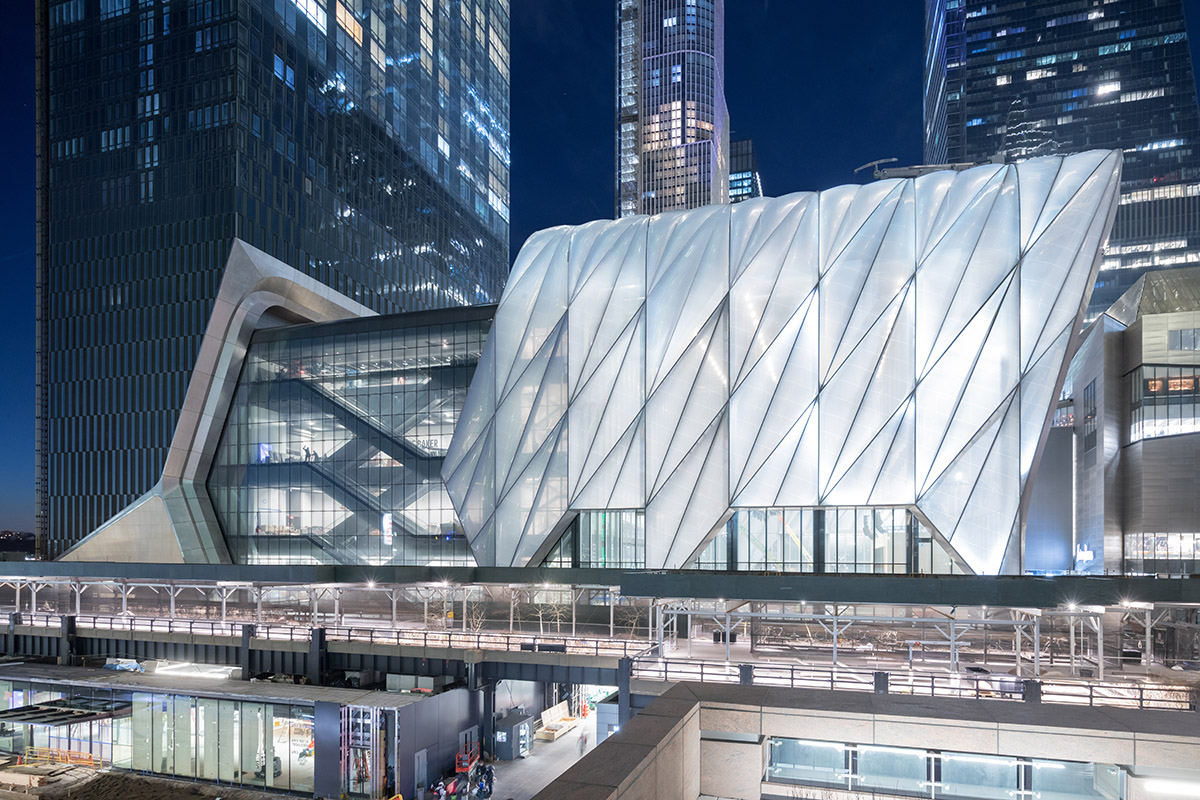 "Ready to support the bold ambitions of today’s contemporary artists, The Shed in New York City is singularly focused on commissioning, producing, and presenting original works of art from all disciplines and for all audiences. The Shed is an intriguing new building in a city rife with them, but it stands out because of its ingenious telescoping outer shell that glides along rails physically transforming the building.

The 200,000-square-foot building comprises two floors of gallery space, a versatile theater, rehearsal space, a creative lab, and skylit event space across its eight levels. Nestled alongside the city’s celebrated High Line elevated park, The Shed was inspired by its neighborhood’s industrial past and the city's West Side Rail Yard. Much like the gantry cranes found in shipping ports and railway systems across the country, The Shed’s outer shell rides along a series of bogie wheels guided by a pair of 273-foot rails." 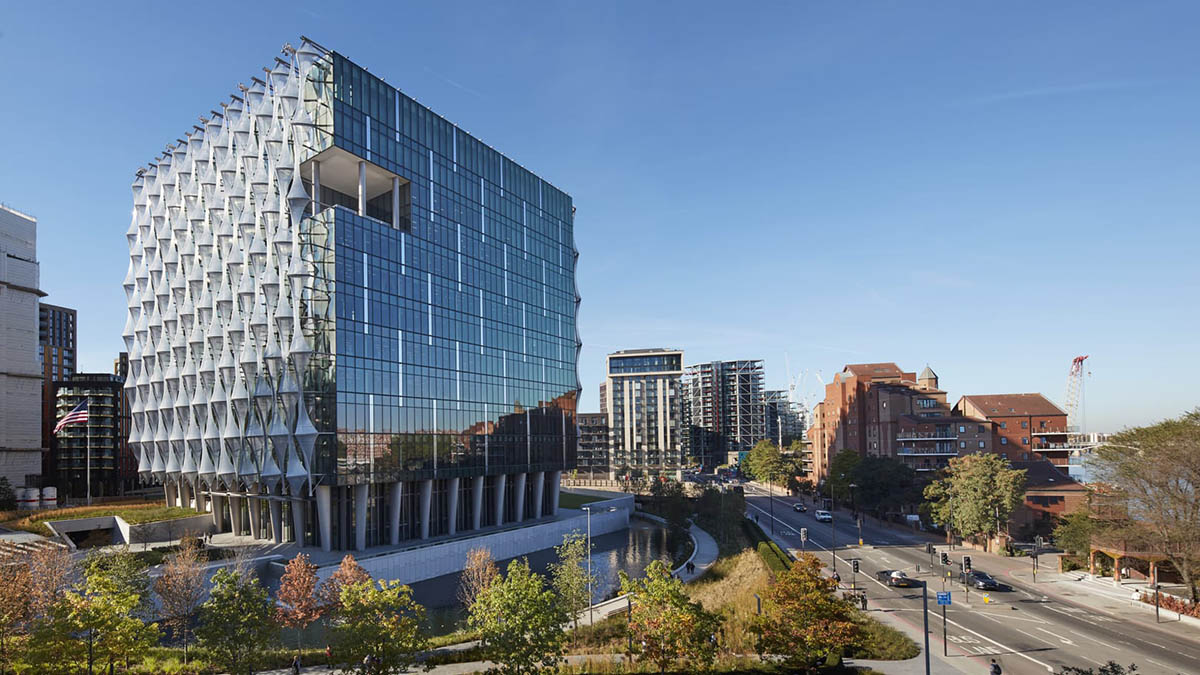 US Embassy in London, London, United Kingdom by KieranTimberlake

"Along the banks of the Thames River in London’s Nine Elms section, the new U.S. Embassy emphasizes one of the United States’ longest-standing and highly valued relationships. The embassy, through its architecture, represents the country’s ideals of transparency, openness, and equality while highlighting the best of American design and engineering and fostering a strong sense of identity that melds with stringent security requirements.

Before the new embassy was commissioned, the U.S. Department of State explored strategies for renovating its existing Eero Saarinen-designed building on the city’s Grosvenor Square. Due to the building’s aged systems and infrastructure, a complete renovation, two staff moves, and a significant taxpayer investment would have been necessary. The assessment prompted a new plan to finance an embassy entirely from the sale of existing London real estate owned by the U.S. government."